A Tour for the Tastebuds 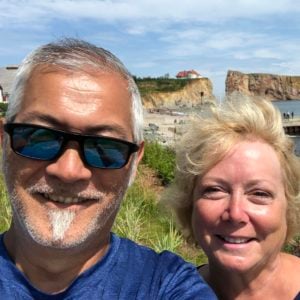 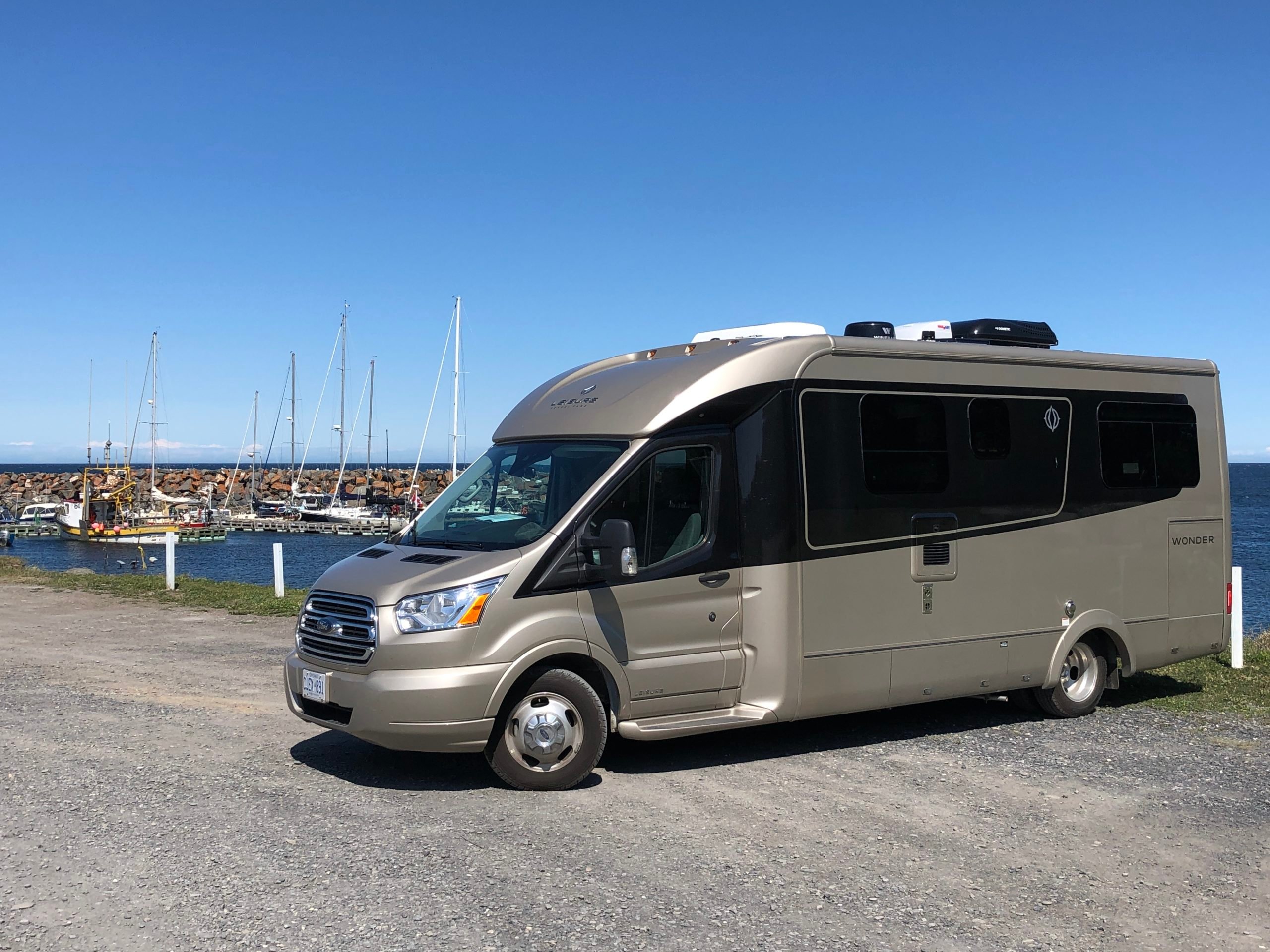 Editor’s Note: Franklin Beecham is a member of LTV’s sponsored content team, The Leisure Explorers. Do you own a Leisure Travel Van and enjoy writing? Learn more about joining the team.

One great element of our marriage is our love for food. We’ve introduced ourselves to an assortment of tastes from all over the world; from Chinese to Indian, Peruvian to Mediterranean, we’ve had it all.

When on the road, eating habits need adjustments, but over the years, we’ve upgraded from campfire food to motorhome gadgets, and it’s much better. I can remember, back in the day, slinging a t-bone on a red hot campfire grill in the dark and chewing on it like a charred piece of leather, with blackened baked potato right out of the coals. Don’t miss those times.

Our 2019 Wonder RTB comes with its own amenities, including a two-burner propane cooktop, a 3-way fridge and freezer combo, a convection microwave oven, and a pullout pantry. Accessories we’ve added, besides the essential pots, pans, crockery, and utensils, include a small toaster, small blender, Instant Pot, and Blackstone grill. 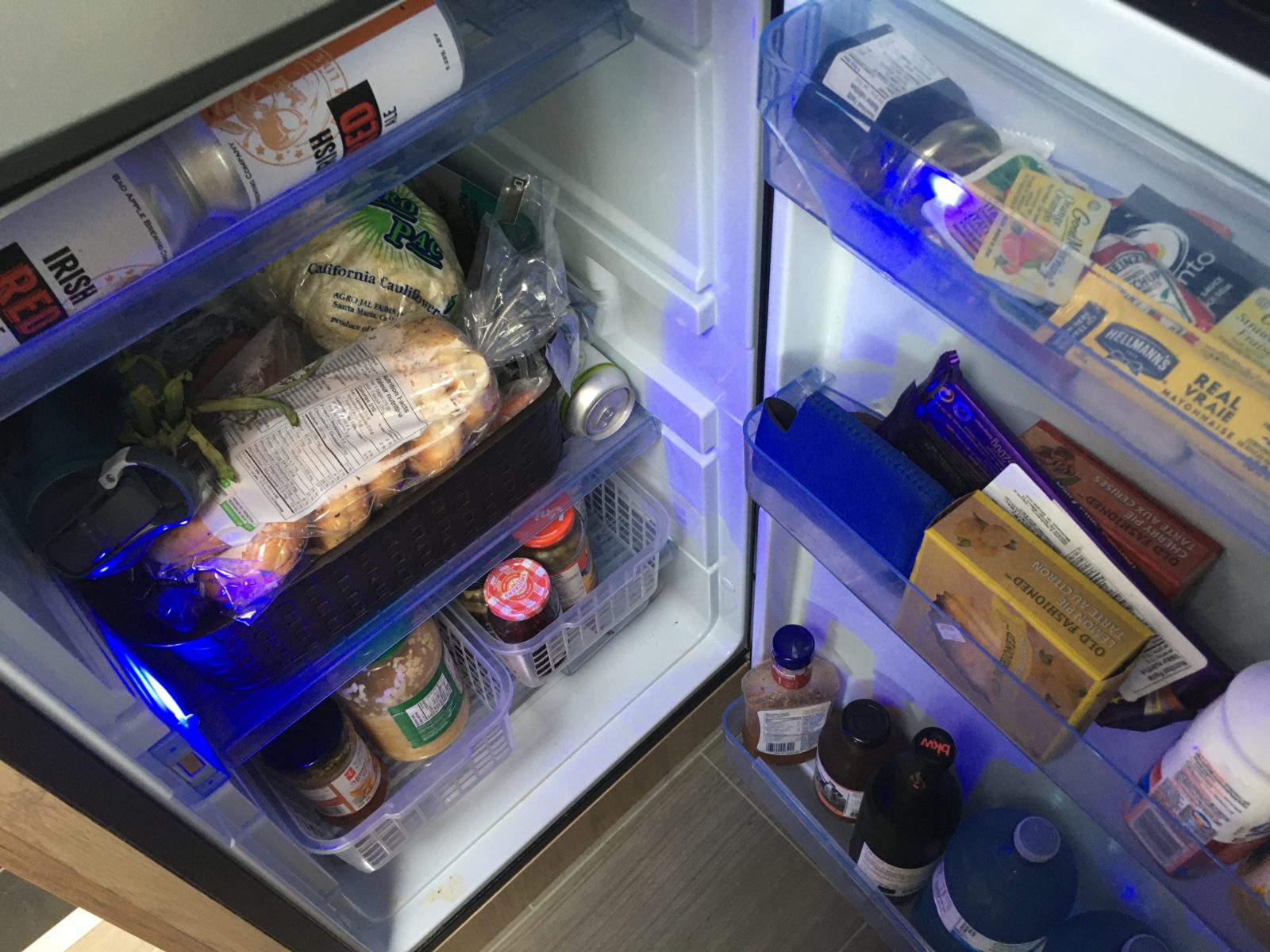 Not having every kitchen appliance or gizmo on-hand makes for creative food preparation. To start with the basics, being used to daily espressos meant needing to discover alternative coffee options. Our home espresso machine just wouldn’t work in our Wonder, as we have to accommodate the 1000 watt inverter. After checking the LTV Enthusiasts Facebook page, we decided to switch from espresso to French pressed coffee. French presses are easy enough to use, but are very messy to clean. Not wanting to flush the grounds into the grey water tank, we needed a better solution. The Facebook group provided the answer: disposable coffee grounds bags made especially for French presses. Easy peasy and no messes.

Another appliance we found is a simple two-slice toaster which uses only 700 watts. Breakfasts are usually very typical: toast and peanut butter with fruits, or muesli cereal and rice milk. At one of the Harvest Hosts locations in New Brunswick, we bought Beyond Meat sausages, which was a nice change for breakfast. And now and then, for a treat, we fry up turkey bacon and tomato on a bagel. While we do enjoy our veggies, we also savour assorted seafoods, too, as you’ll soon see.

Our usual home lunches are simple smoothies, made from fruit like blueberries, dates, fresh ginger, turmeric, and the main ingredient, a plant-based protein powder. Along with all that, we just add water and blend. At home we use a Vitamix blender, but again, that is too powerful for the inverter, so for the RV we use a smaller Black & Decker blender. It takes a bit longer to blend, but still produces a delicious smoothie that is filling enough for lunch. Sometimes we supplement smoothies with salads, soups, and simple sandwiches.

Dinners can consist of pretty much anything we’d normally make at home, from stir-fries to curries, chilli, and stews. These can be made on the stovetop or with the Instant Pot. I especially like cooking a hearty Beyond Meat burger with all the veggie fixings on the Blackstone. Simple, quick, and tasty! 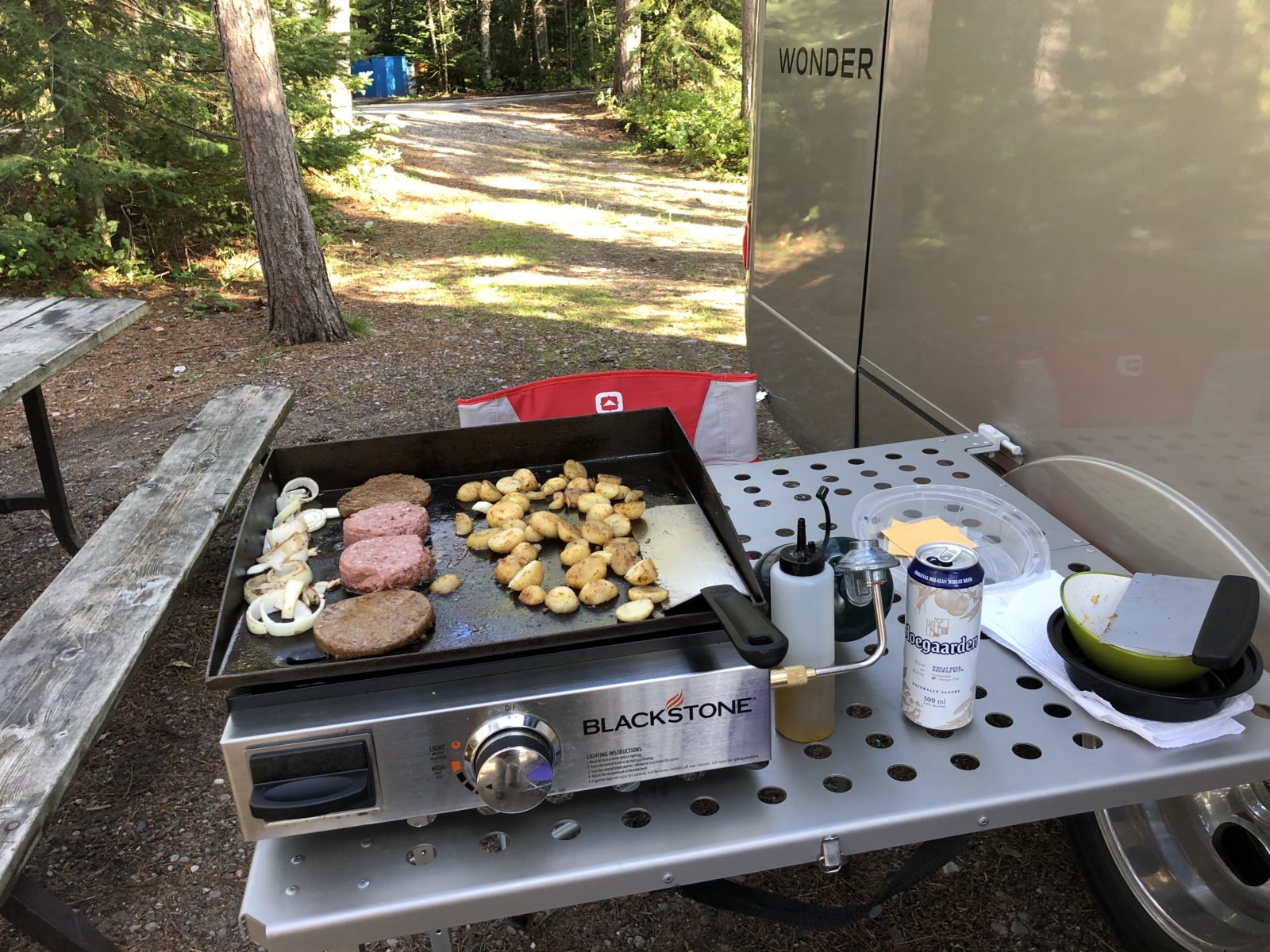 Veggie burgers on the Blackstone.

All of the above, and most meals normally made in our home kitchen, are possible in the RV, however, when travelling it’s great to sample the local cuisine. For people who eat a lot of plant-based food, preparing this is easy at home and in the RV, but choices are limited when eating out. So we usually check posted restaurant menus first, and make allowances.

Travelling from southwest Ontario to Prince Edward Island, we certainly tasted some interesting and delicious fares.

When in Quebec City, a favourite stop was the D’Orsay Restaurant-Pub. Go for a pan full of mussels cooked in a wine sauce with assorted breads to dip and accompanied by a Blanche de Chambly beer. A perfect repast on a hot summer’s day spent touring the city. 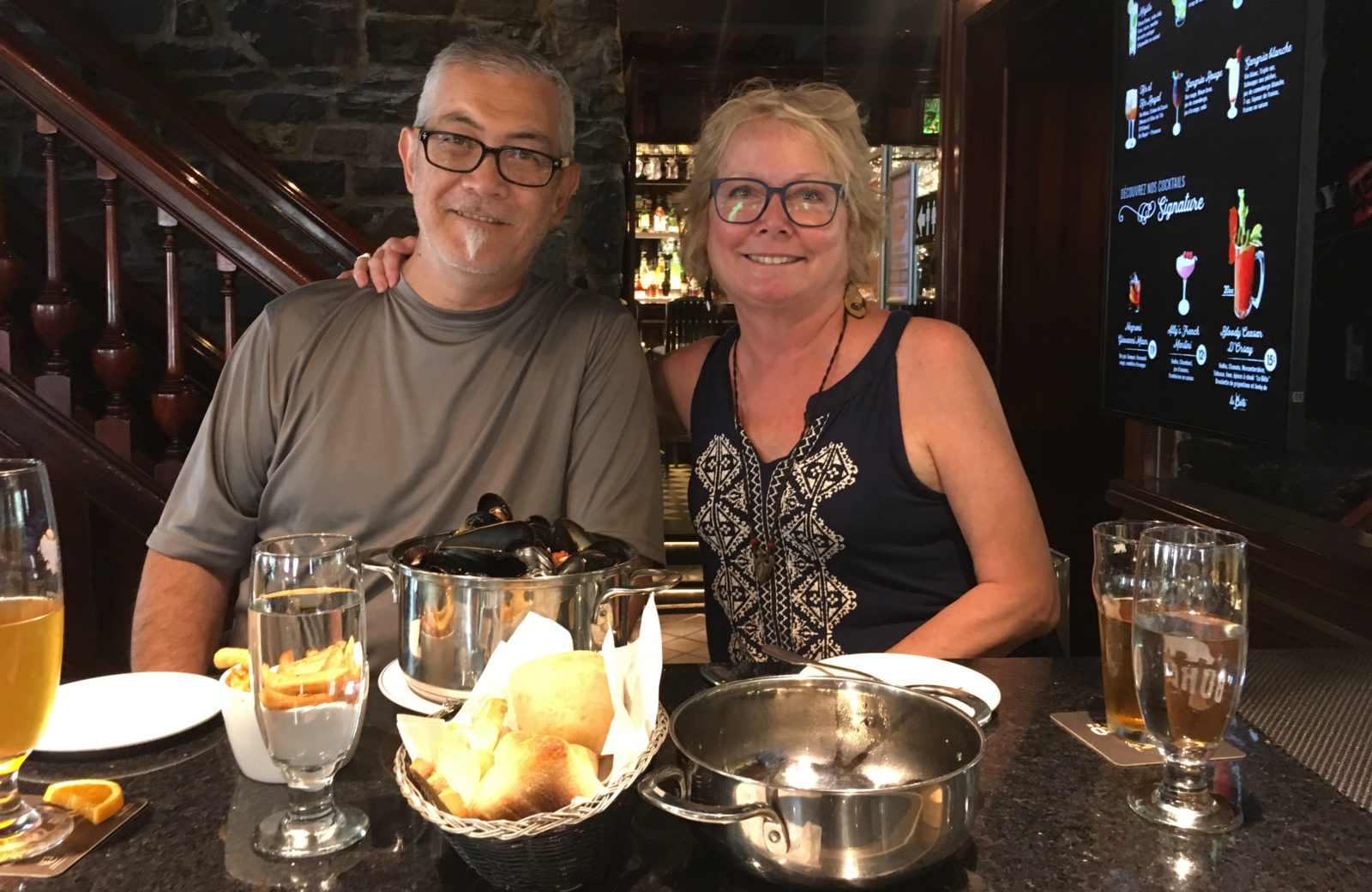 Mussels and beer in Québec City.

A quaint place to visit is the pioneer village of King’s Landing in New Brunswick. Take a walk through this authentic settlement, or ride the wagon through the village and grab some lunch at the King’s Head. They have a tasty salad with rhubarb dressing topped with poached salmon and homemade brown bread, accompanied by a refreshing iced tea. Robyn ordered a delicious chicken pot pie.

A trip along the Bay of Fundy must include a visit to St. Andrews by-the-Sea. Low tide exposes magnificent rock formations and tide pools. Take a stroll along the main drag and be sure to have a cocktail on the front porch of The Algonquin Resort, to chillax with the rich tourists. Our quest for the east coast lobster rolls began at the The Gables Restaurant on the town’s main street. Eat alfresco on the patio and enjoy their tasty rolls full of succulent morsels of lobster, accompanied by a garden salad. 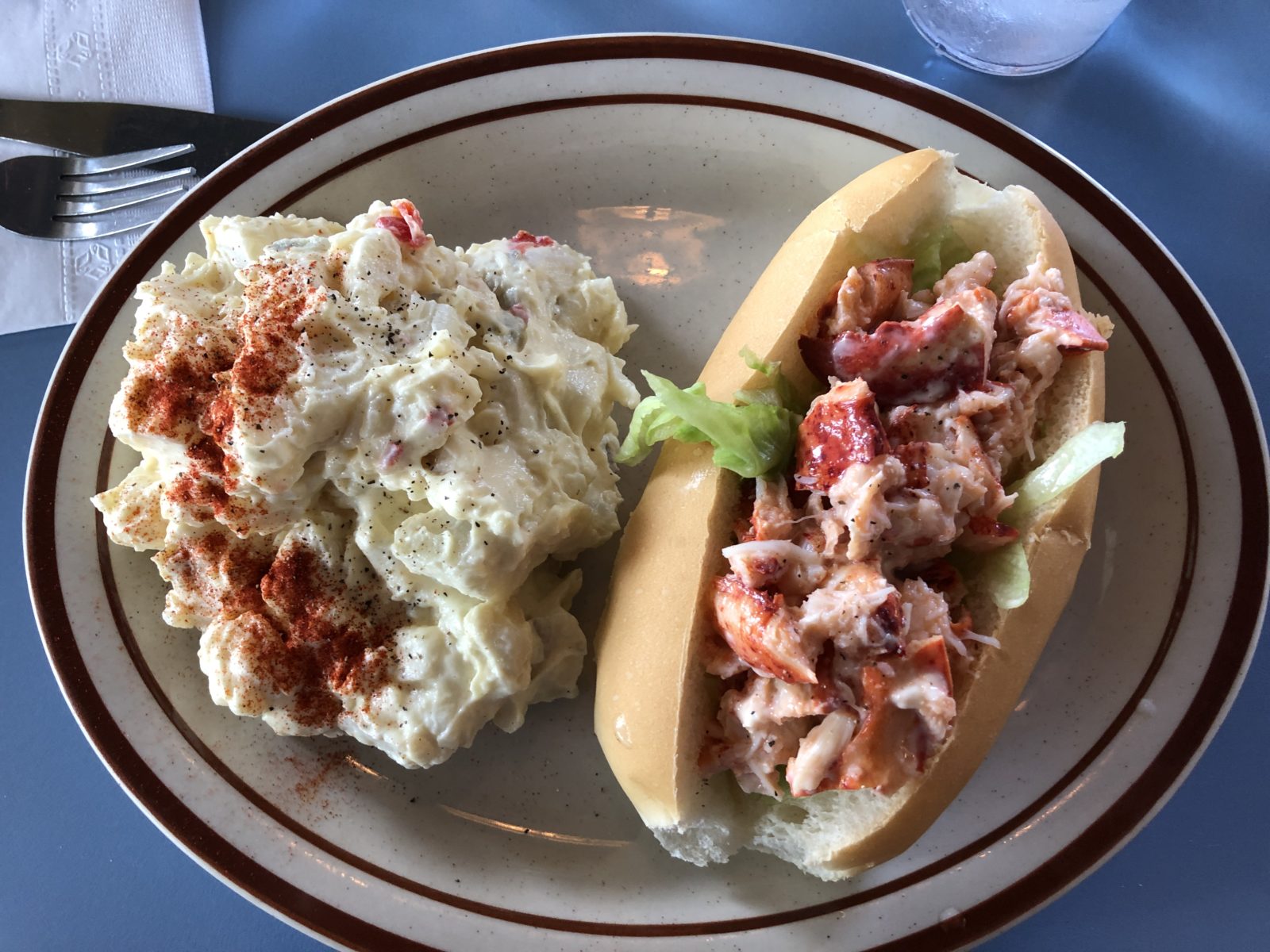 One of many lobster rolls.

A must-stay campground is Fundy National Park. Offering spacious, clean sites with hookups, the campground served as a great base for exploring local tourist venues, not the least of which were the spectacular Hopewell Rocks in the Bay of Fundy. Tide times are posted, but get there early to avoid the tourist buses.

Outside Fundy National Park is the town of Alma. Most of the eateries vie for your dollars by offering fresh lobster and clams. We stopped at Alma Lobster Shop, which has a small café and patio. Their mussels and scallops were delicious. For our campsite dinner we bought a freshly cooked lobster and some smoked salmon, and served that up with melon slices and a salad topped with parmigiana. The next day, we picked up a pound of freshly baked clams and lobster rolls, which we enjoyed accompanied by a Chevalier d’Or beer. It was a great lunch at our campsite after a hike through the Hopewell Rocks. 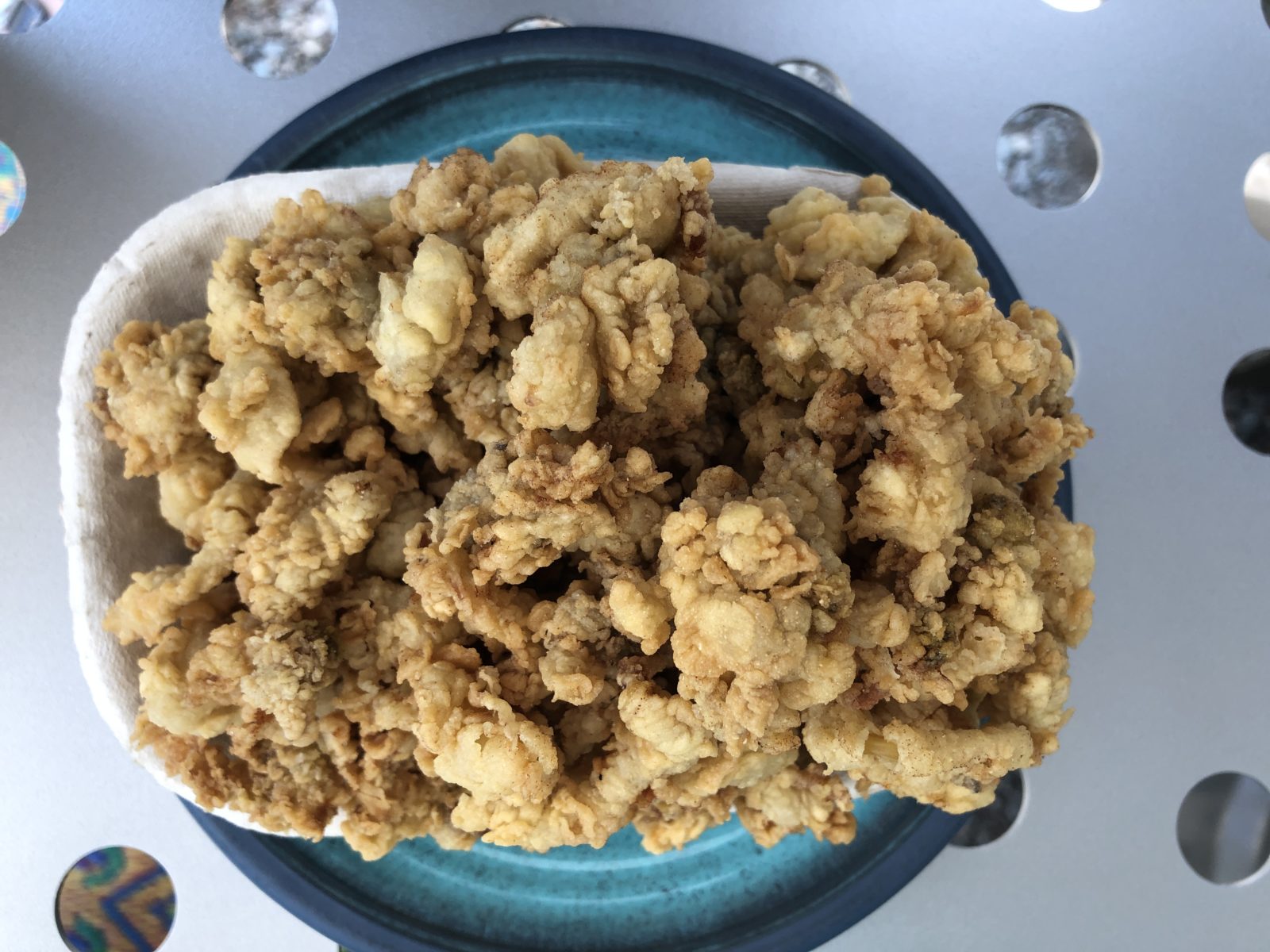 Leaving New Brunswick and crossing the bridge to Prince Edward Island (PEI), we stopped at Borden-Carlton for a quick lunch and pit stop. Of course, I had to have another lobster roll to continue my quest. It wasn’t that good, unfortunately.

We drove across the Island to Bay Fortune, our destination for the next six days we’d spend camping in our friends’ driveway. Louise and Gordon greeted us with a potent gin and tonic with fresh strawberries, lime, and mint, and the warmth of the Maritimes began. There’s nothing like homemade food to fill you up. We enjoyed fresh sautéed haddock and hodgepodge (new potatoes, yellow beans, carrots, beet greens, and coleslaw). Yum! Our hosts even took us out clamming, which was a real treat. 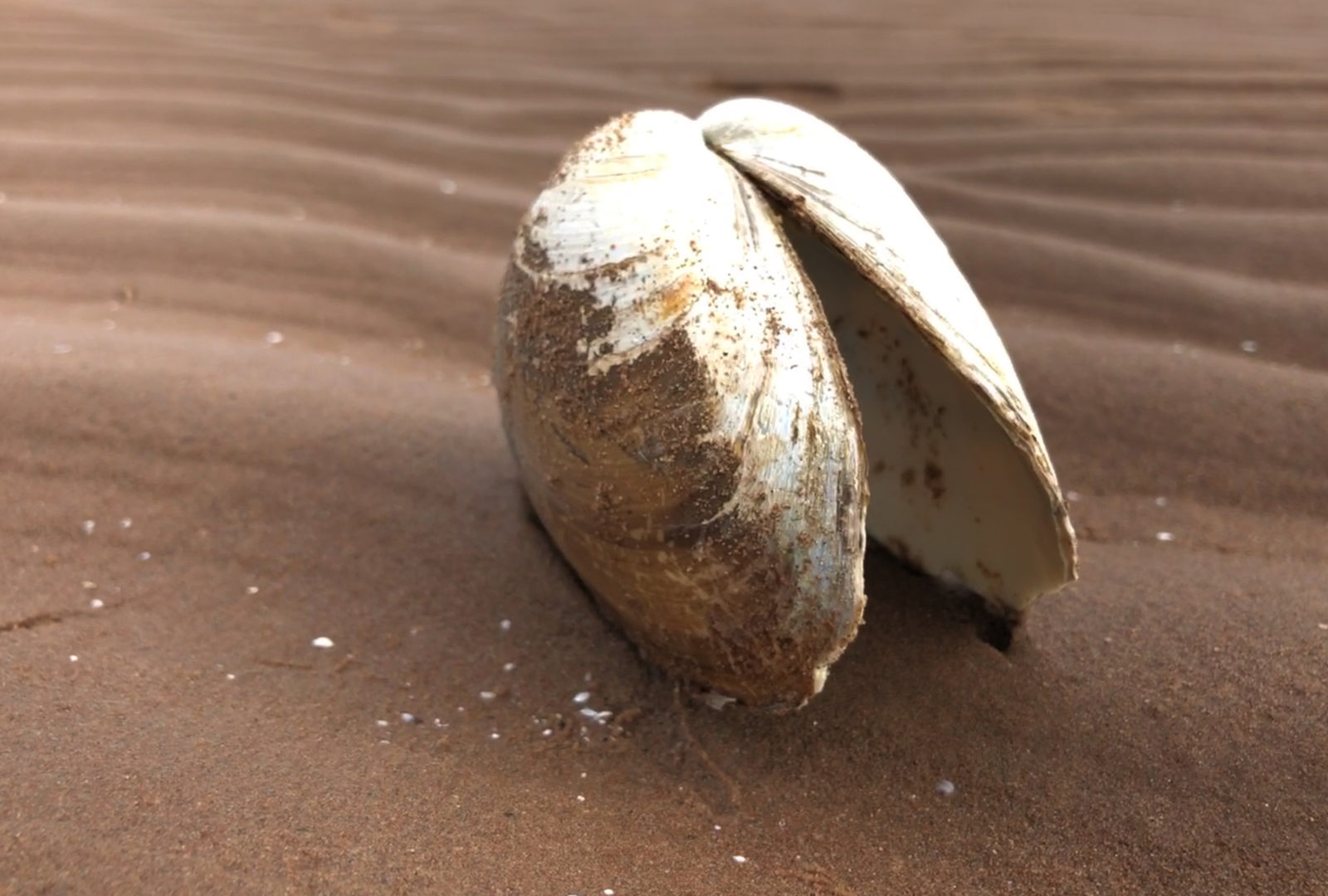 This PEI clam had its day.

During our stay in PEI, we also camped near Cavendish. A must-visit here is to The Handpie Company. They make a huge assortment of mini pies, perfect for dinner in the RV accompanied by a Dunhams Run cider. For lunch we stopped at Victoria-by-the-Sea. Lobster Barn on the pier has the best lobster rolls in the province, bar none! Another good lobster roll was at Peakes Quay on the waterfront of Charlottetown. Speaking of lobster, a typical tourist stop is the New Glasgow Lobster Supper. There were quite a few RVs in the parking lot. You are led into a huge hall and served the popular mussels, lobster, salad and dessert combo. It’s the thing to do.

Back in New Brunswick and still on the lobster theme, you just have to stop in Shediac, home to the giant lobster statue. It’s pretty good, too – lots of RV parks and crowds! Downtown, we stopped at Lobster Deck Restaurant and ate, yes, another lobster roll. Well, why not? Check out Parlee Beach while you’re there. There’s a good propane fill station near the beach. 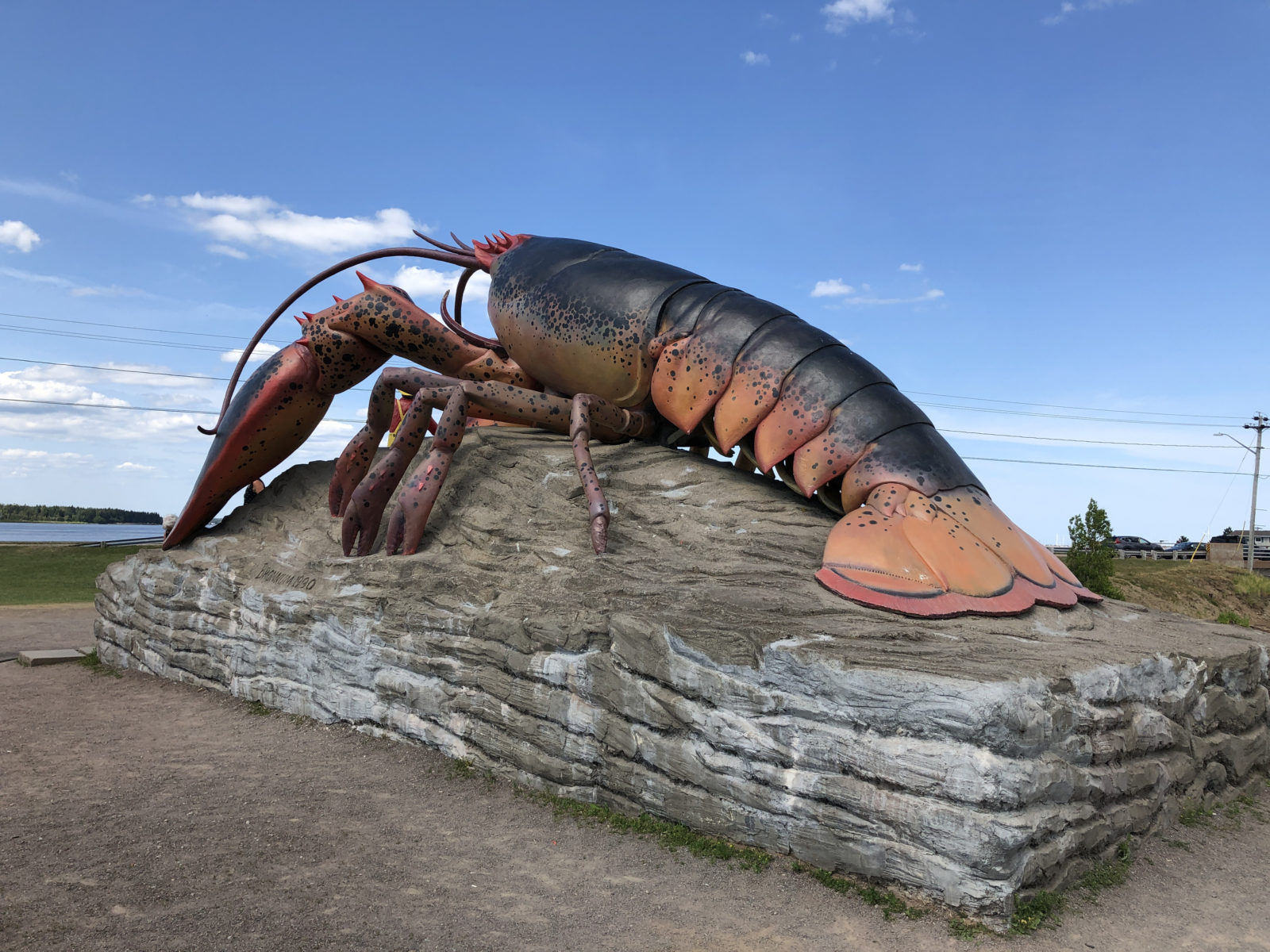 By now we were on the Acadian Trail, and on the lookout for traditional food. Stopping in Miscou, we lunched at La terrasse à Steve, a crab shack on the waterfront. Crab season opened, so I imbibed. It was good, but our other dishes didn’t pass. Oh well. On the Acadian coast there are many fromageries, and one we tried was Les Blancs d’Arcadie in Caraquet. You can watch the crew making curds for poutine. Their cheeses and jams were delicious! We had to bring some back with us. 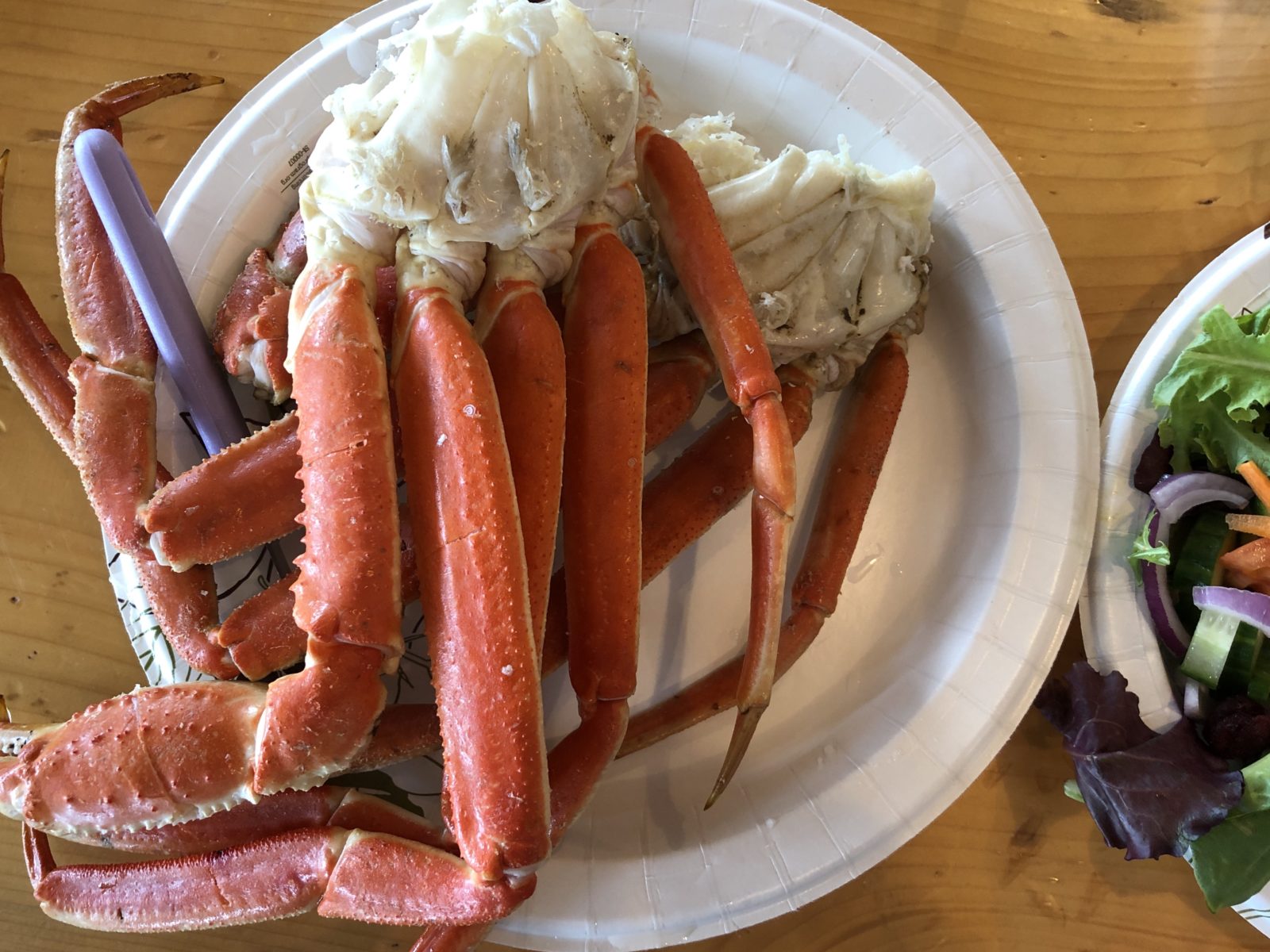 First crab of the season. 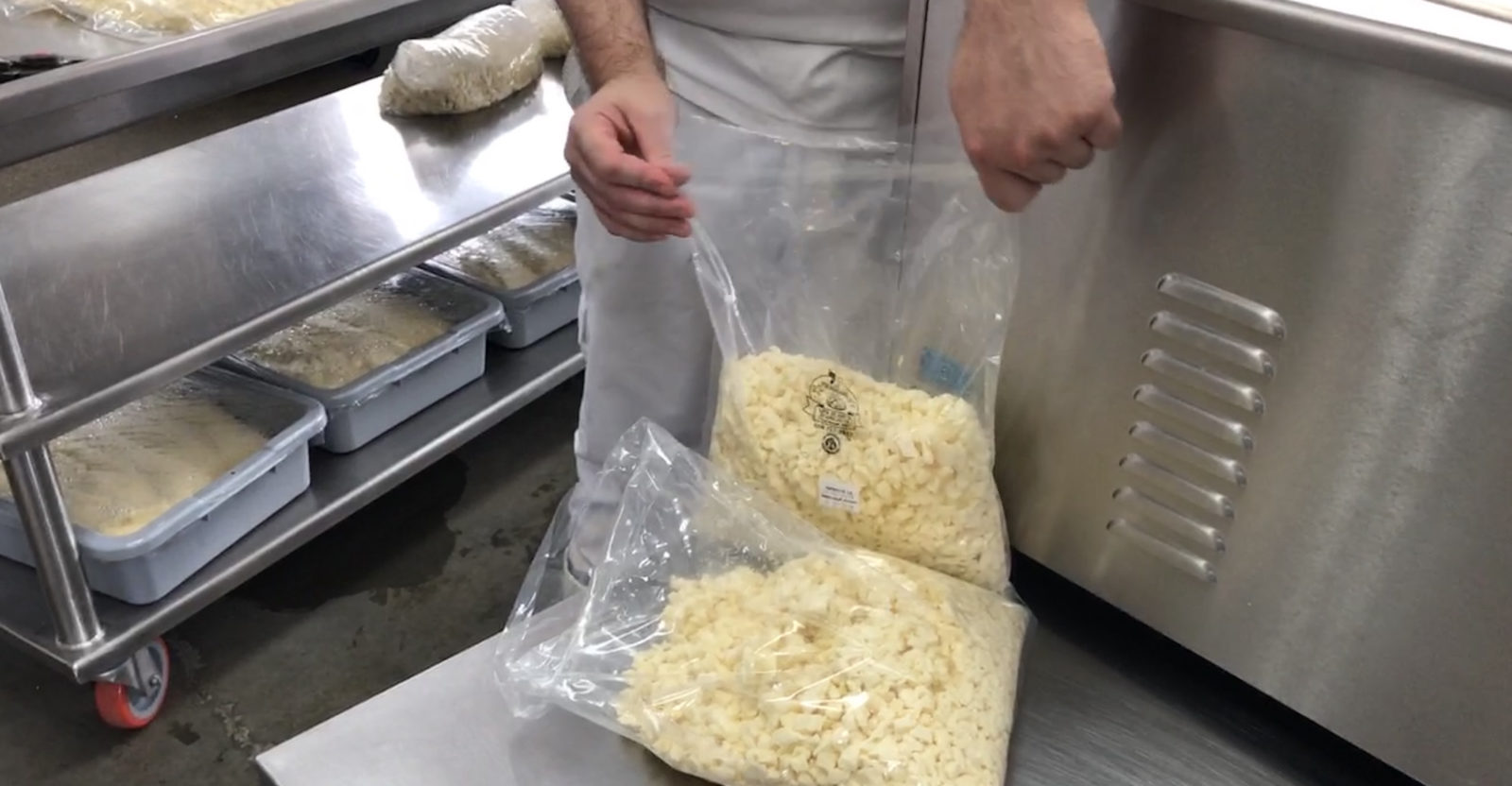 Curds, ready to sell for poutine.

One of our favourite places to shop, especially on the road, is at farmers’ markets, and though small, we stopped at one in New Carlisle. We found fresh burgundy beans, kale, onion beer compote (great with cheese), local honey, baguette, and fresh cinnamon buns. 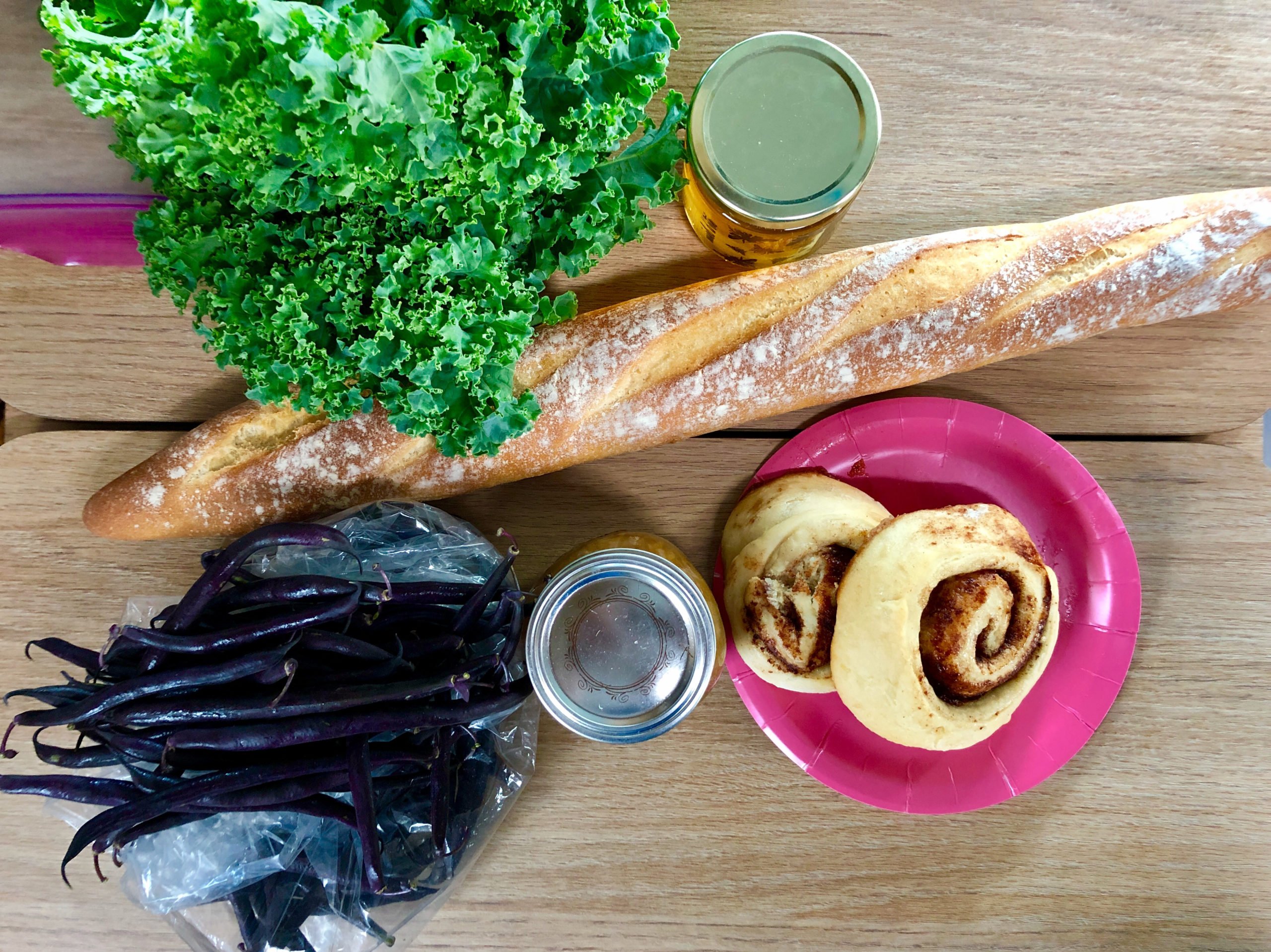 On the Gaspé road is Carleton-sur-Mer, where a great little family restaurant for a late lunch is Restaurant du Cap à la mer. The grilled halibut with mash, veggies, and salad was perfectly priced and satisfying. 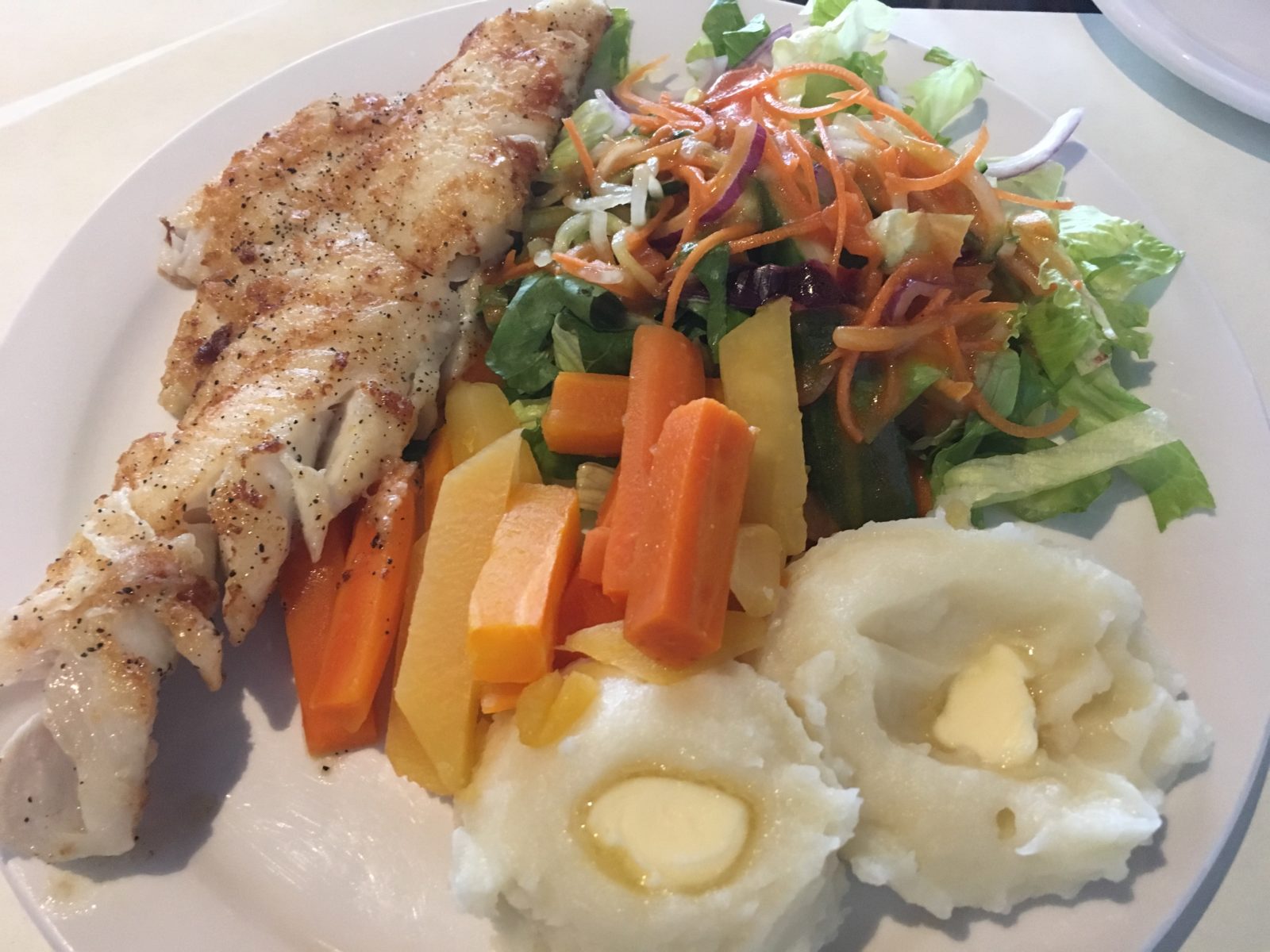 We camped outside Percé at Camping de la Côte Surprise. It seemed like everyone was there to see Percé Rock. There are many eateries along the boardwalk. We stopped in at La Maison du Pêcheur for lobster poutine and the local Chambly beer. That was so filling, I think I skipped dinner. 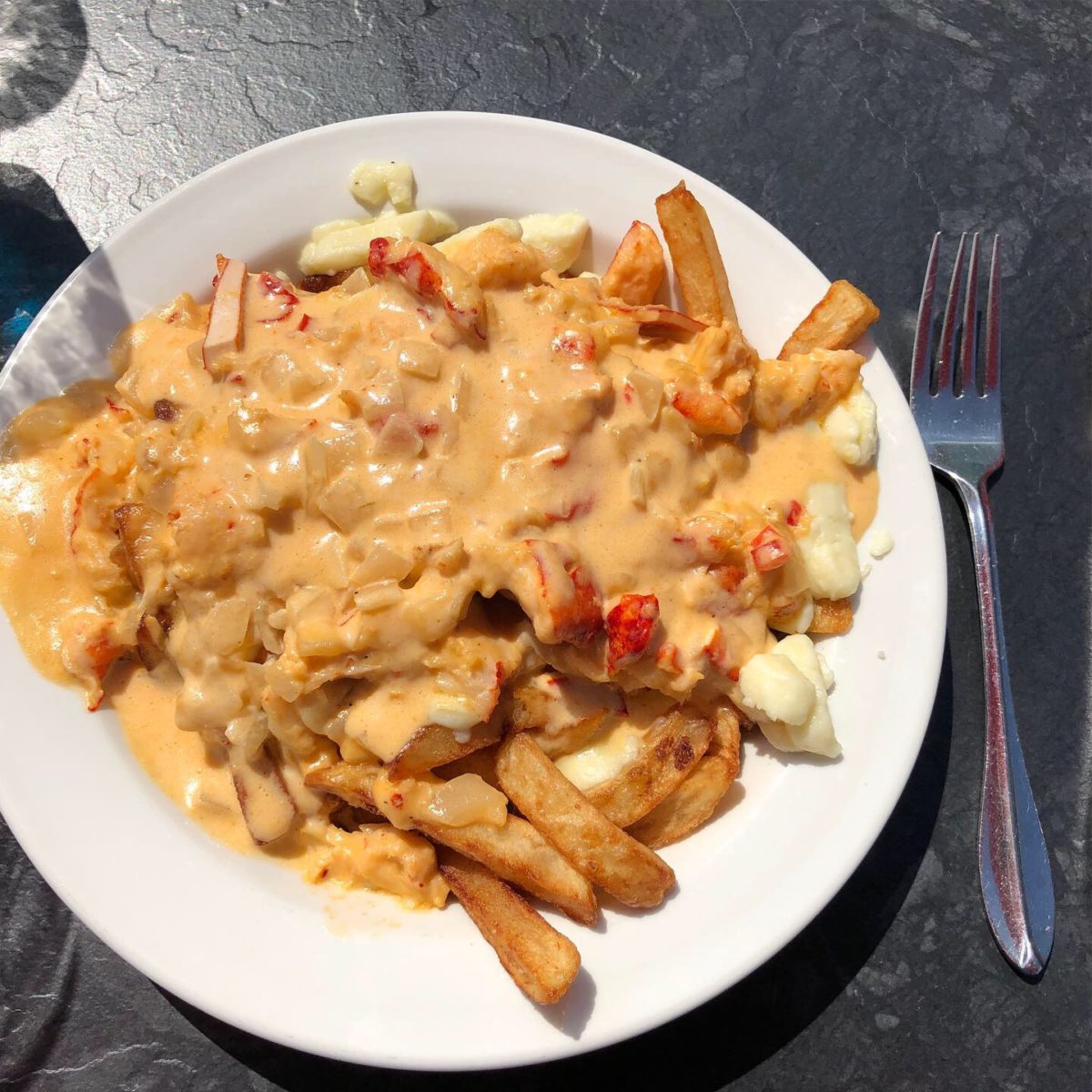 The next day, we drove to Gaspé. The campground, Camping Gaspé, was five minutes out of town, where we met a friendly couple from New Brunswick who invited us for mojitos at happy hour. The next day, we all planned to have a lobster dinner together at their campsite. Jacques and I handpicked our lobsters in a poissonnerie in Gaspé. Jacques’ wife, Sharon, made a tasty shrimp salad. Wow! Jacques expertly cooked the lobster on his camp stove. One of our favourite meals! 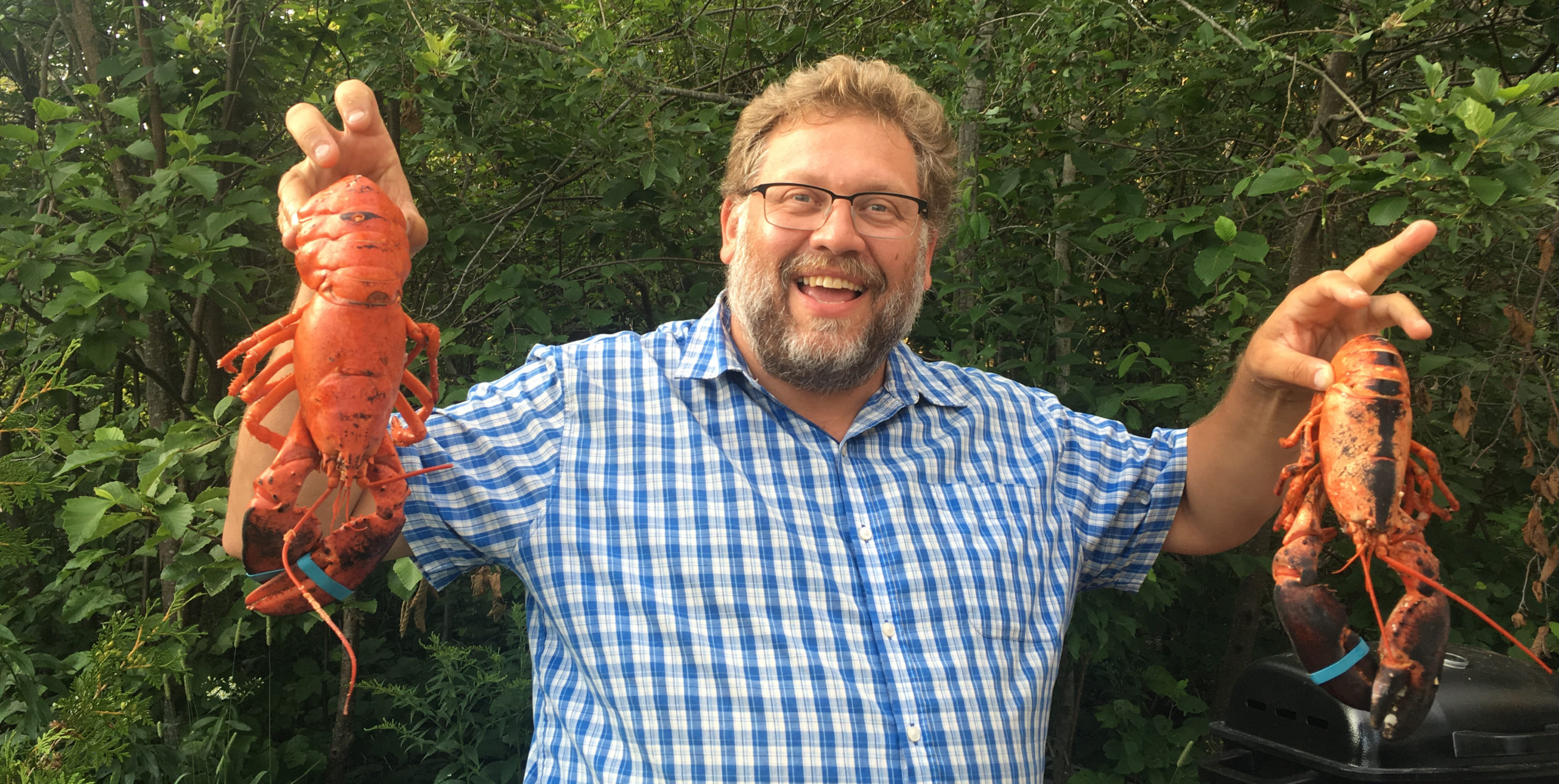 Heading along the Gaspé Peninsula, we stopped in Sainte-Madeleine at La Capitainerie des Deux Soeurs, a small restaurant in the harbour. Their house dish was fish and chips, accompanied by a Blonde de l’Anse golden ale. 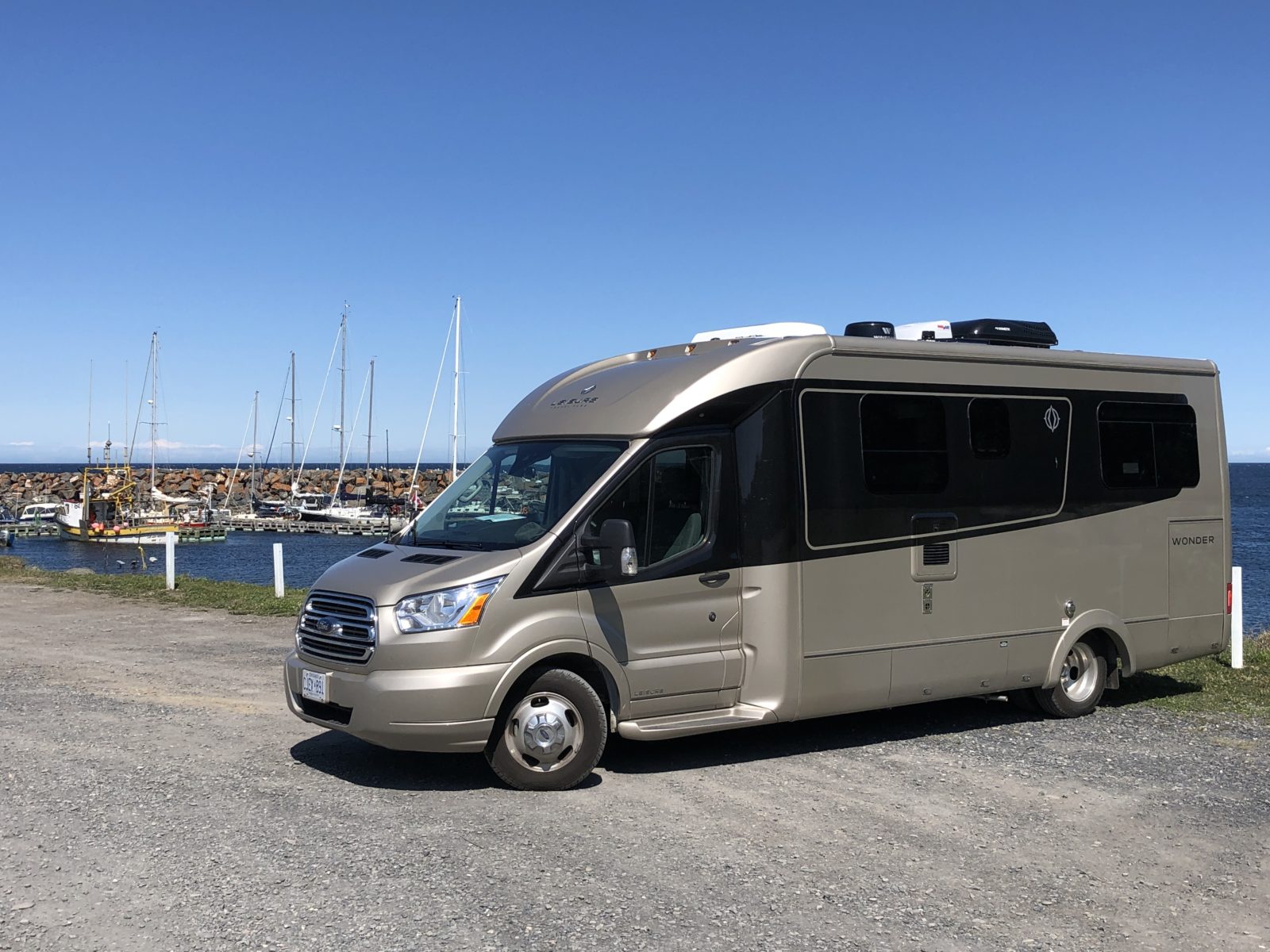 Waiting for fish and chips in Sainte-Madeleine.

Back in Ontario, we camped at Happy Green Acres near Drummondville. Leftovers of Robyn’s veggie curry, lobster pate, and assorted cheeses made for good campsite fare.

Following some time in Prince Edward County at a Harvest Hosts, we stopped in Cobourg at a provincial park. We highly recommend Craft Food House for vegan food.

Homeward bound, our last stop was to see family in Toronto’s north end, and a sumptuous Chinese feast at the Congee Queen Restaurant was enough to put us in a food coma. Ha ha! We still had a two-hour drive to get home.

Of course, we didn’t eat out all the time and certainly visited many other establishments along the way during this six-week adventure. Camping food is great, especially in our Wonder, but traveller food is amazing and these stops mentioned were memorable. 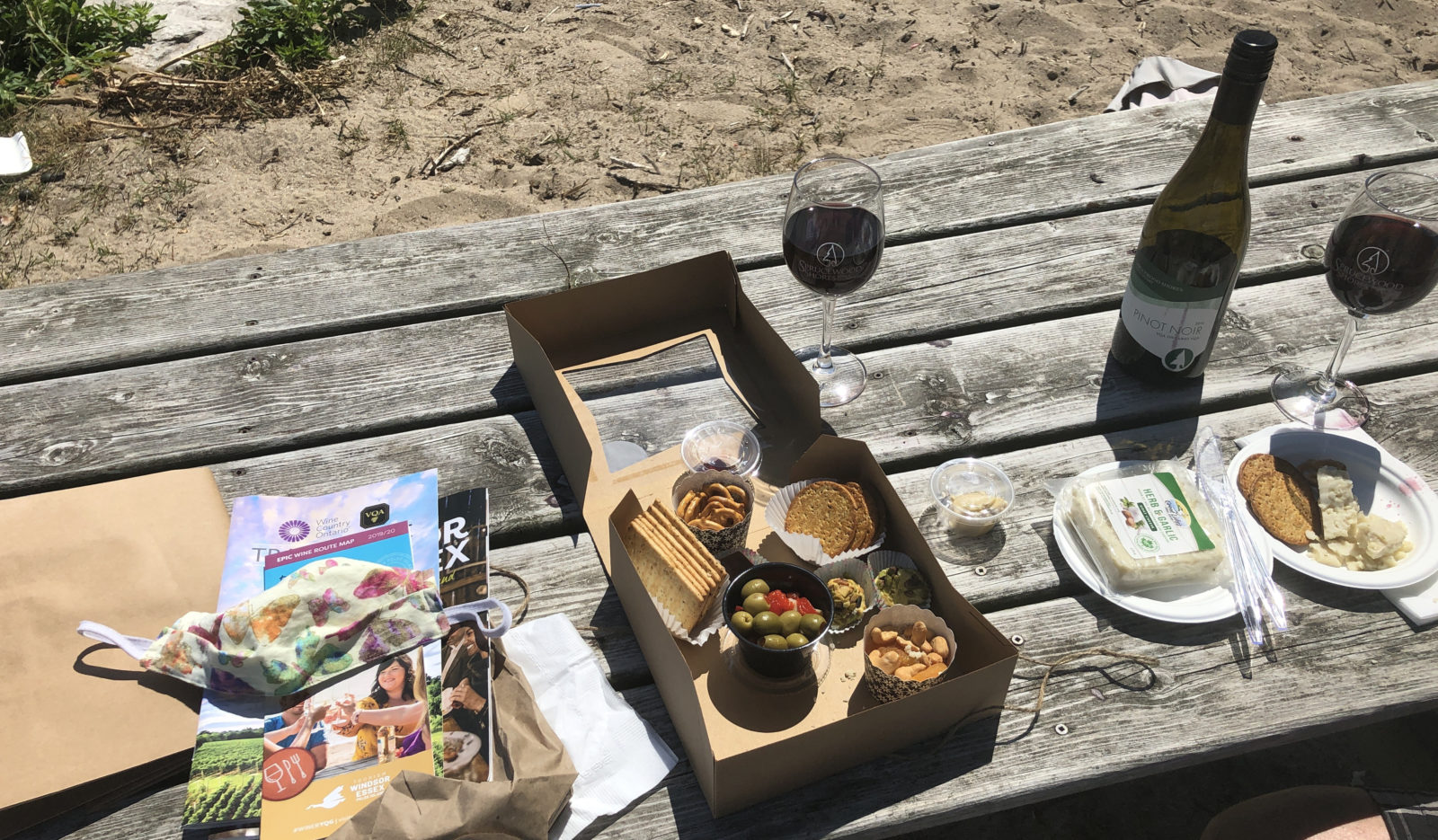 During the 2020 season, we were particular about eating out. When our province opened, we chose to visit several Harvest Hosts destinations – wineries, breweries, and even an alpaca farm. Not all locations offered food, but those that did we paired well with the beverages they sold. When camping at campgrounds was allowed, we made use of the Blackstone grill, whether grilling trout fillets or assorted vegetables, even turkey thighs and veggie burgers. We had curry and naan bread for a birthday dinner and on a lighter note, Kraft Dinner mac-and-cheese. 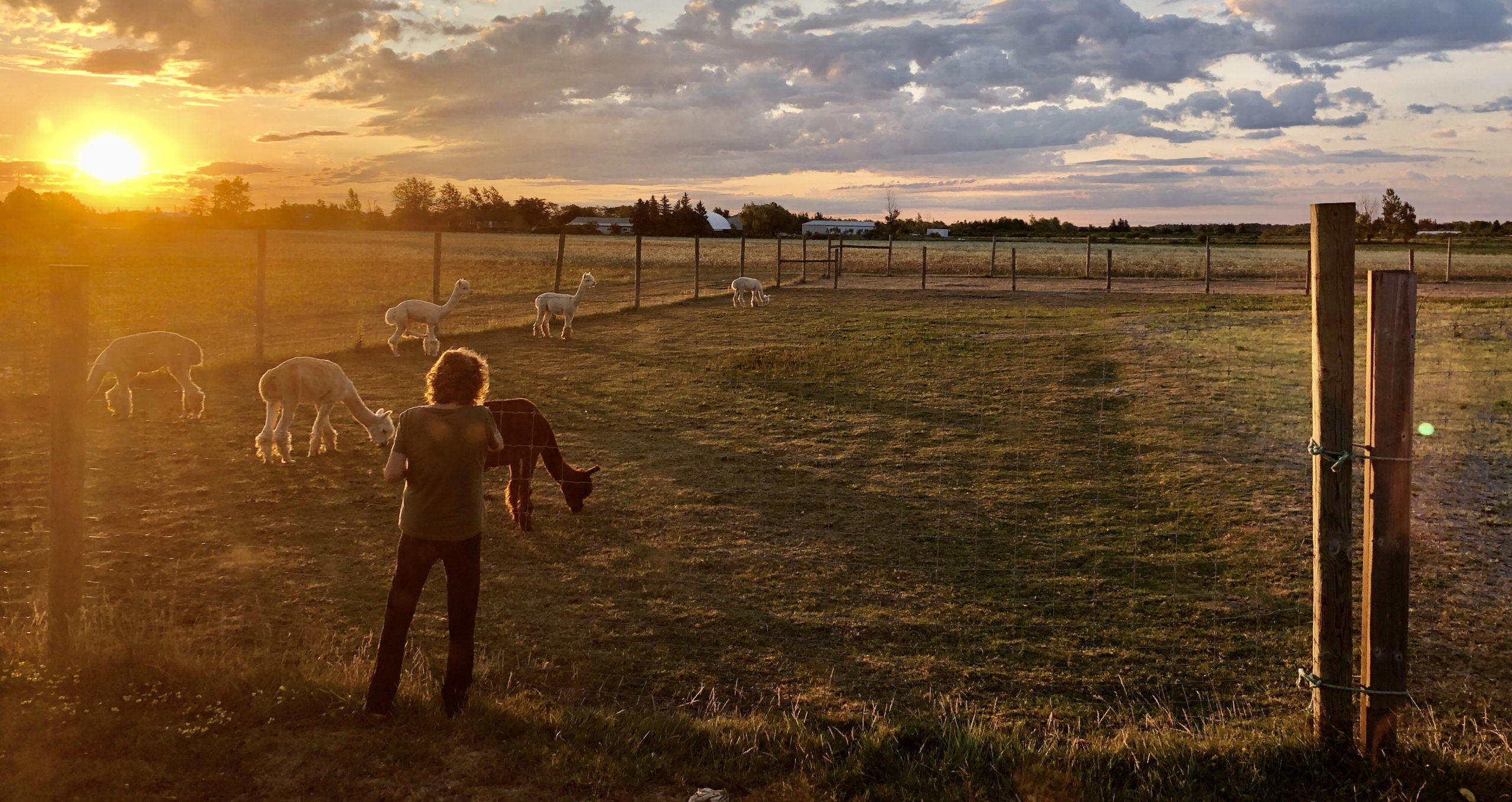 At a brewpub on Manitoulin Island, we ate pizza with beer. At a diner in Wawa, I had one of the best poutines I’ve ever had. Food on the road doesn’t have to be gourmet, and camping food is all over the board. Be creative, have fun, and enjoy your food. 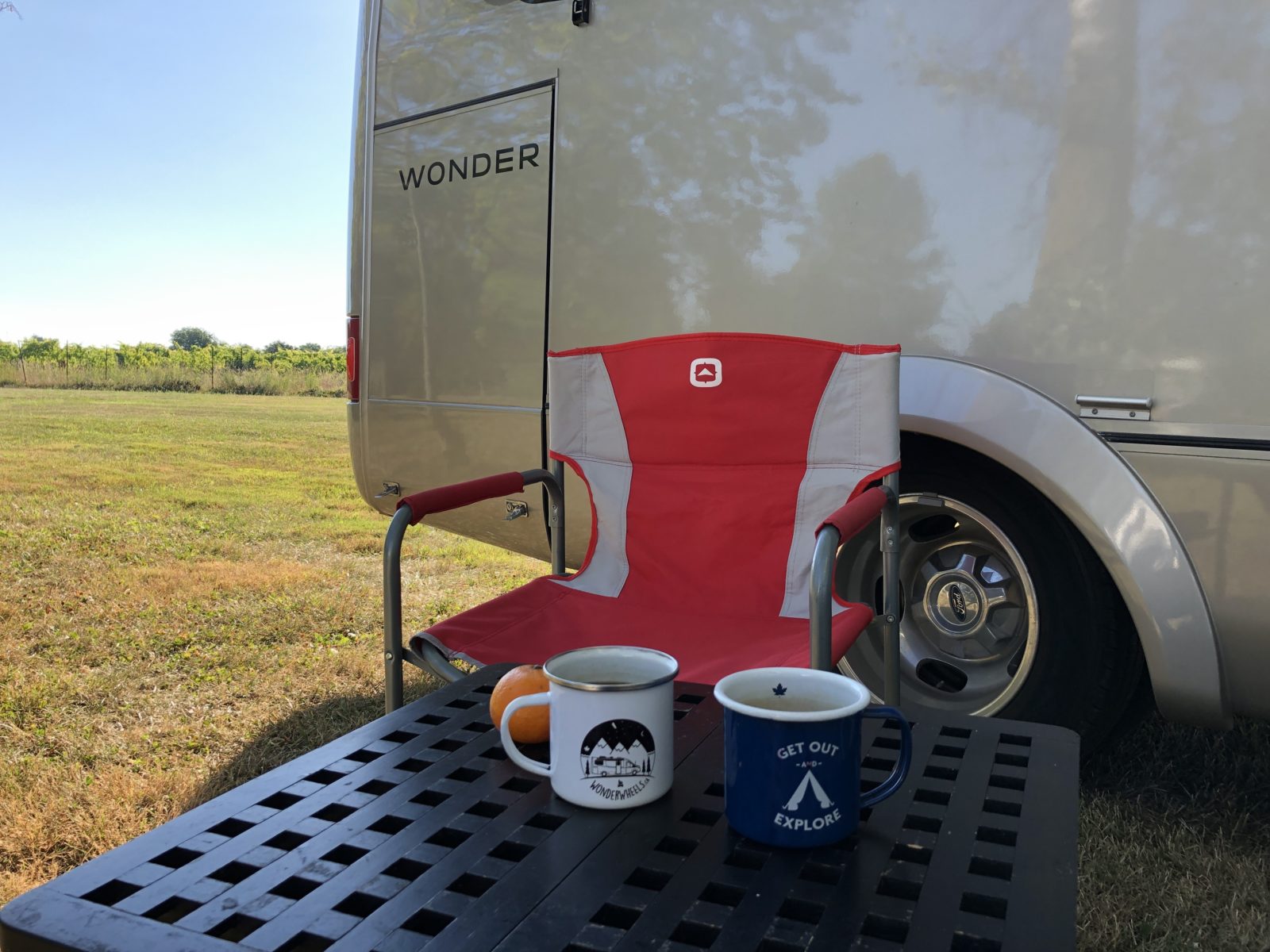 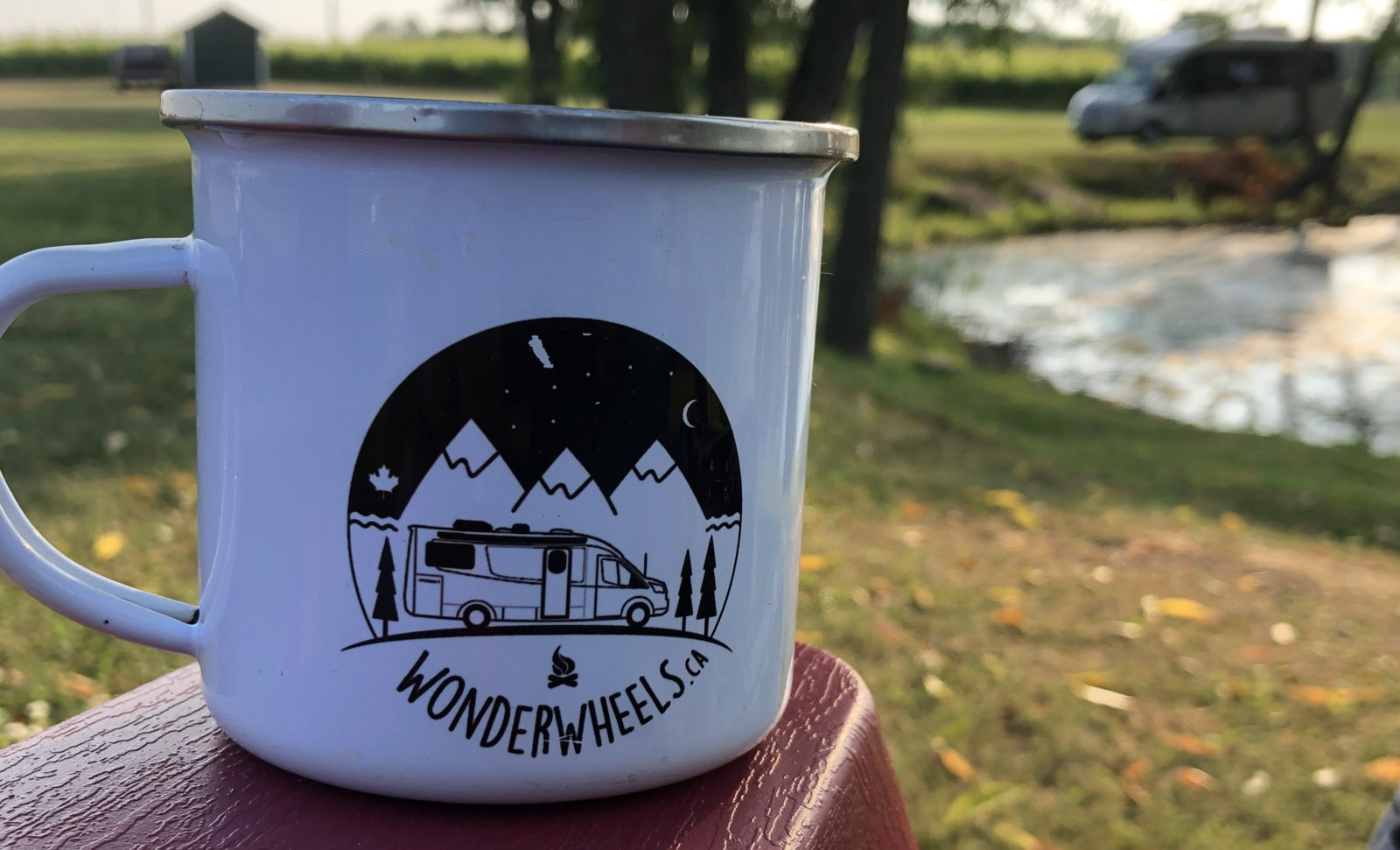 We can’t wait to get back on the road again and savour the food of explorers!

We're Franklin Beecham and Robyn Craig. Both of us have had rich lives travelling across the world. As members of the Leisure Explorers Team, we hope to share with you our new travel experiences in our 2019 Wonder RTB. See you on the road.