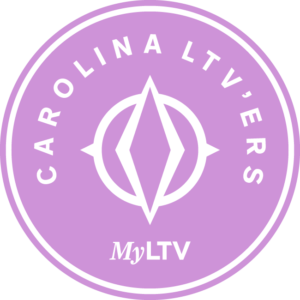 The Carolina LTVers Travel Club had its first ever rally in the Asheville, NC area from October 20 – 23, 2017.  We had 12 rigs (24 people) attend the event at Rutledge RV Park in Fletcher, NC.  The group was mostly comprised of members from North and South Carolina, but we also had attendees from Georgia, Virginia and Indiana.

The hosts for the rally were Garry & Laura Cooper, who live in the Asheville area.  To make transportation easier for the group, we rented two 15 passenger vans and the group shared the costs.  This allowed us to leave our LTVs parked at the campground and travel together which gave us more time to learn about each other.

On Friday afternoon, we had an orientation/get acquainted meeting followed by a potluck dinner in the campground recreation center with the ribs, brisket, chicken and pork covered by the LTV rally rebate process.  During the group discussions, we learned that many of those attending were first time RV owners.  Many owners stated that the deciding factor for buying a Leisure Travel Van was the quality of the unit. Later Friday evening we went to Feed & Seed, a family-friendly Americana music venue that was previously the Fletcher Supply Company.  The venue doesn’t have a cover charge and the band plays for donations by the audience.  During our visit, the Deep River Band was performing two sets of varied music in front of a crowd of a 125 people or so. There was plenty of dancing and even some clogging by members of our group.

Saturday morning started with a group hike in the Dupont State Forest.  The hike took the group to several waterfalls including Triple Falls.  Although the morning temperatures were a bit chilly, the moderate hike helped warm everyone up.

Saturday afternoon included a stop by Stepp’s Hillcrest Orchard.  Apples were in season as were many apple based treats.  Many picked their own apples and a wagon hayride was available too.  A food truck was available for those wanting lunch. Later Saturday afternoon, we visited the Sierra Nevada Brewery in Mills River, NC for a brewhouse tour, beverages at the Taproom and dinner.  The Taproom has roughly 23 beers on tap while the restaurant offers many dining options.  The Sierra Nevada complex also has a very nice outdoor space with a music stage, cornhole, a garden to supply their restaurant with fresh veggies and herbs and trails that lead down to the French Broad River.

On Sunday morning we visited the famous Biltmore Estate that was built by George Vanderbilt between 1889 – 1895.  It has roughly 179,000 square feet and is the largest privately owned residence in the U.S. It is still owned by George Vanderbilt’s descendants.  The house has 250 rooms including 35 bedrooms, 43 bathrooms and 65 fireplaces.  It also had many conveniences that were unusual for the time including electricity, electric elevators, forced-air heating, fire alarms, an indoor pool and a bowling alley.  The Estate sits on roughly 8,000 acres that also include gardens and a winery.

Our group did a self-guided tour of the house and we had time to visit the gardens and surrounding park-like grounds.  We later reconvened for a wine tasting at the Biltmore Winery with several members buying a few bottles to take home.

On Sunday afternoon, we took the vans to downtown Asheville to let people explore the area on their own.  There were plenty of things to do including the Craft Fair of the Southern Highlands, the Grove Arcade, Mast General Store and the Lexington Glass works.

On Sunday evening we went to the Guitar Bar to see a jam with local musicians and many members enjoyed the nice weather on the outdoor deck.