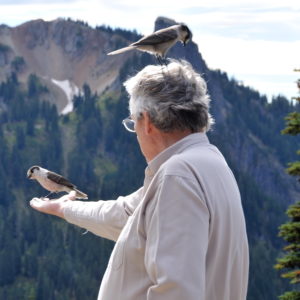 This was to be our first ever motorhome rally.  We really did not know what to expect.  Our exposure to motorhomes started a few years before when we rented one in Alaska for two weeks.  The experience was great but the vehicle (a camper van with 65,000 hard Alaska miles) left something to be desired.  But the hook was set so in 2014 we purchased a Sprinter Van MH  (from the other Canadian company) and managed to put 16,000 miles on it over the next two years until we traded it in for our 2018 Unity MB this past January.  By the time of the Rally we had been on Riley 2, as we named our new UMB, for over 75 nights and almost 8,000 miles.

What a beautiful way to end the day.

By the time of the Evergreen Leisures Rally we were no longer neophytes in the RV world and had enough RV park experience to know that you can stay in an RV park for a couple of days and never meet your neighbors.  I don’t know why this is.  It seems that we’re all on vacation and ought to be walking around talking with each other, sharing tales and a glass of wine.  To top this off in our 24,000 miles of travel we never met any other LTV owners other than Tim Wickham, head of Evergreen Leisures.  It was with this trepidation that we hopped into Riley on September 22 and headed 200 miles to the east to join 20 other LTV vans at the Columbia Sun RV Resort in Kennewick, Washington.

After a leisurely lunch and some wine tasting in Prosser we arrived at Columbia Sun mid-afternoon.  What to expect, what to expect?  The check in process went well.  We were welcomed by the park staff and told we were about the tenth van to arrive.  (How great is that!  We weren’t first!)  Soon we were backing into our spot. We weren’t even hooked up yet before several of the earlier arrivals came over to meet us.  Unlike most crammed in RV parks, there was lots of green grass and space around each spot.  Soon name tags had been affixed and everyone was milling around the “Leisure” corner of the park visiting and looking at the little additions and modifications many had made on their LTVs.

What a motley crew!  We had airline pilots, retired airline pilots, a published author, active and semi-retired business owners, former public employees, dental and medical personnel, retired technical people along with sundry others and maybe best of all an RV mechanic sent by Johnson RV of Sandy (Portland), Oregon who stayed the weekend and spent time with each owner with questions and little issues that could be solved on the spot.  Our newest van was a 2018 Serenity picked up from Johnson only two days before the Rally.  How great is that?

By late afternoon the smell of barbequing pork loin permeated “Leisure Town” and greeted the newest arrivals as they pulled into camp.  Our fearless leader, Tim Wickham, RV chef extraordinaire, was doing the cooking.  It was time to round up the dishes to share, grab a bottle of wine and head for the meeting room provided by the Park.

Pork tenderloin and side for dinner

Following dinner and homemade ice cream plus a lot of leisurely chit chat the group started to break up up for the evening.  Some managed to escape before the Karaoke guy walked in and announced that it was time to go outside and start singing.   After warming up on a few oldies including “Girls Just Want to Have Fun” (sincere and humble apologies to Cyndi Lauper) we finally came up with the theme song for the 2017 EL Rally.  Perhaps you can watch it here:

There isn’t much that can be done to top something like this.  Might as well go to bed and get ready for the Park’s Saturday morning pancake breakfast.  Goodnight fellow LTVs.  Sleep tight.

The nicest thing about having your own LTV is that no matter where you are you always sleep in the same bed and get out of it the same way in the middle of the night to use the bathroom.  About the only thing that changes is the background noise.  Here is was I-82 about a half mile away but the Park is in a rural enough area that during quite hours one only hears an occasional truck going by.  Did you know that you can count trucks just like counting sheep and fall asleep?  Morning often comes to soon and one of our fellow LTVers was off early to ride on the hilly, deserted roads in this area.

Soon enough it was time to get up and have pancakes along with Tim Wickham’s bacon.  Following breakfast it was more visiting and getting to know the fellow LTVers in our area.  One couple broke out their electric pedal assisted bicycles and let everyone take a spin.  These fold up and at 48 pounds can be moved inside the van for traveling and storage.  Their owners took a 19-mile jaunt to a state park located at the junction of the Columbia and Snake Rivers – about an hour each way.  The consensus was that everyone wanted one.  Personally, I can see something like this before towing a vehicle.   Our Unity is small and versatile enough to accomplish most of the tasks required for long-term RVing.  Still, it is nice to be in an area with a lot of local sights and not have to move the van to see them.  We shall see.

Dinner that night was bring your own protein for grilling and a side dish to share.  The food and wines were excellent and everyone was comfortable enough to table hop and enjoy talking with others.

Kern is a retired business owner who travels in a 2017 Unity MB. He first got hooked RVing when he rented a beat-up class C motorhome in Anchorage, AK and spent two weeks of rip roaring fun fishing, clamming, wild mushroom hunting, chasing bears, and being chased by bears (OK, everything but the last part). He now enjoys the beauty of the Seattle area in summer, and travels mostly during the winter months.