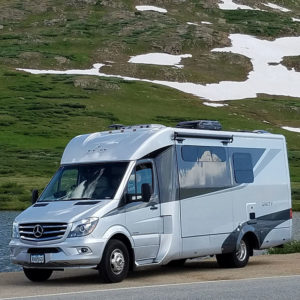 The Heartland LTV’ers held our very first rally at Whitebreast Camp, Lake Red Rock, Iowa. We filled 19 of the 22 sites in the Ponca loop located on a peninsula jutting into the lake. We had 18 LTVs and one couple who are seriously considering a purchase in the future. Our members from Iowa, Illinois, Wisconsin and Missouri were joined by LTVers from Minnesota, Ohio, Kentucky and one full-timer originally from Oregon. We had a variety of models represented: 1 Wonder, 2 Libreros, 2 Serenities, and 13 Unities (all floorplans except the IB). A few of us had met at previous rallies (Winkler and Leisurely Great Lakers), but for most this was their first LTV rally. 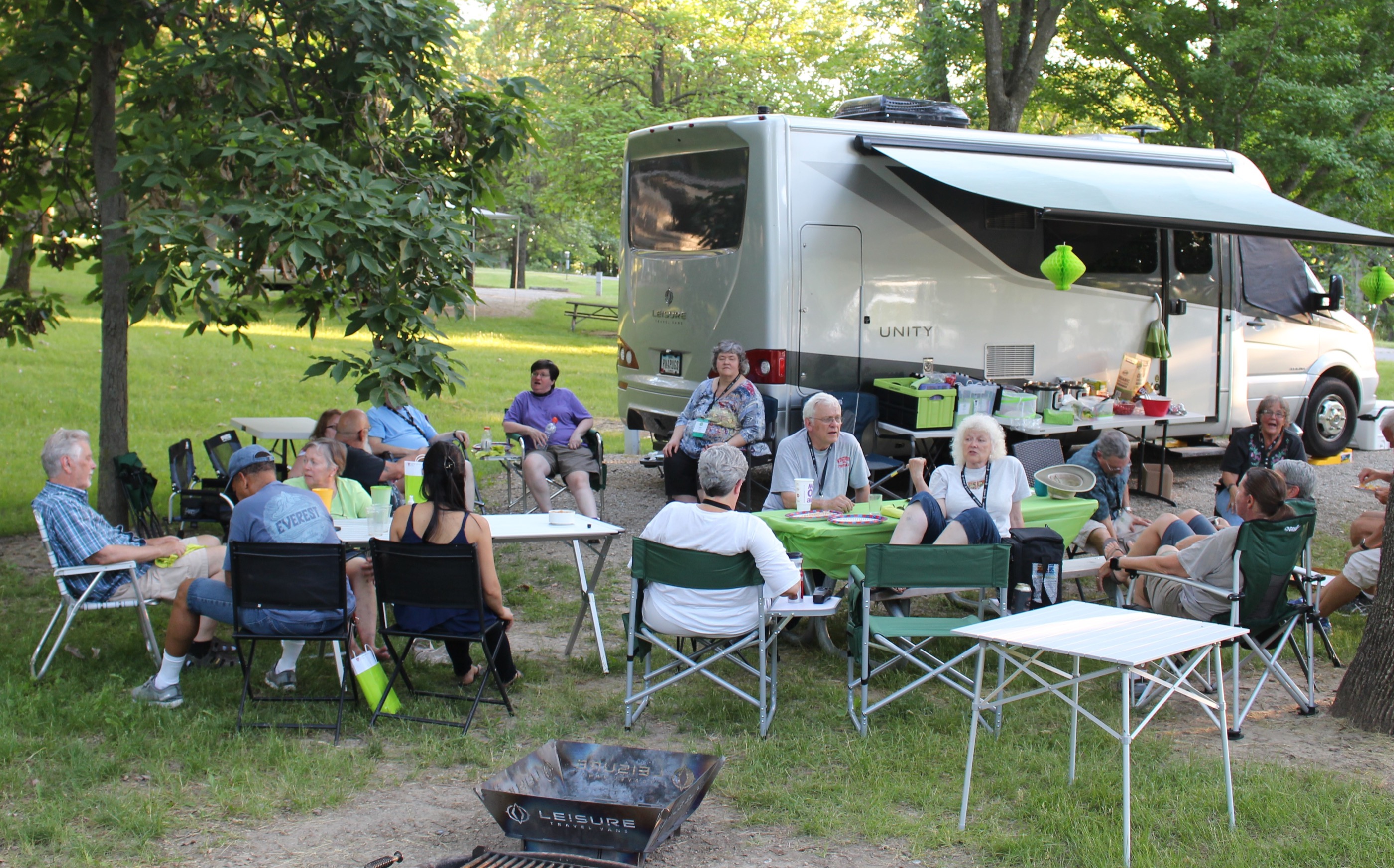 The LTVs started arriving on Thursday, May 31st. As people checked in with me, they received a welcome bag consisting of name badges & lanyards, LTV sticker & pins, maps of where everyone was in the loop, the campground, the lake area and facilities, visitors information on the area and each of the ladies received a small cross-body bag embellished with their initial that I made over the course of the last few months.

We had 10 LTVs arrive Thursday, so LTV provided a taco bar for dinner. It was a great opportunity for people to meet and get to know one another. 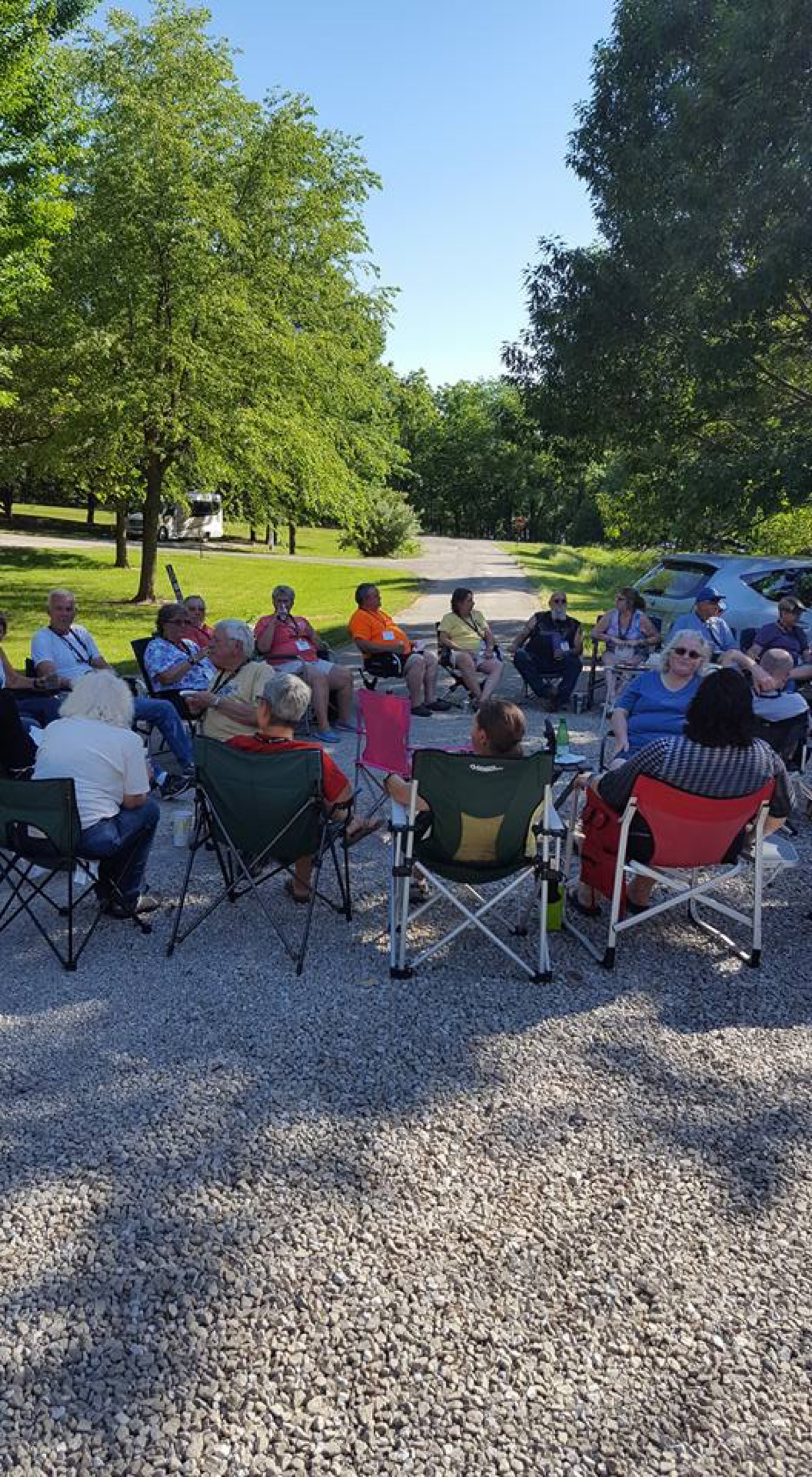 By dinner time on Friday, the entire group was present. We gathered for some local snacks of Pella bologna & Fresian Farms cheese before dinner. Then I conducted our first annual meeting. We decided to set a schedule for our rallies. Our spring rally will be the first weekend in June and our fall rally will be the first weekend in October. We will try to determine our locations for 2019 when we meet in October near Potosi, WI. The group selected me to continue as club leader (I think it may be for life!). Andy will serve as Leader Assistant. With the current size of the group, we felt that additional officers were not necessary at this time. We will revisit this each year.

Friday night our main dish was pulled pork sandwiches provided by LTV. Half of the group provided side dishes for our potluck. After dinner, we taught the group how to play “LTV Bingo,” learned at the Winkler rally last year. Prizes included an LTV journal, LTV apron, and I again put my sewing machine to work to make an embroidered pillow and several items with our club logo.

Early Saturday morning a thunderstorm moved through which delayed our morning coffee slightly. For a special treat, LTV provided Dutch letters from the local Jaarsma Bakery in Pella, Iowa. These pastries were a hit! Late morning we decided to conduct tours of our RVs. Everyone makes these little homes on wheels fit their individual needs. Lots of great tips and tricks were shared. 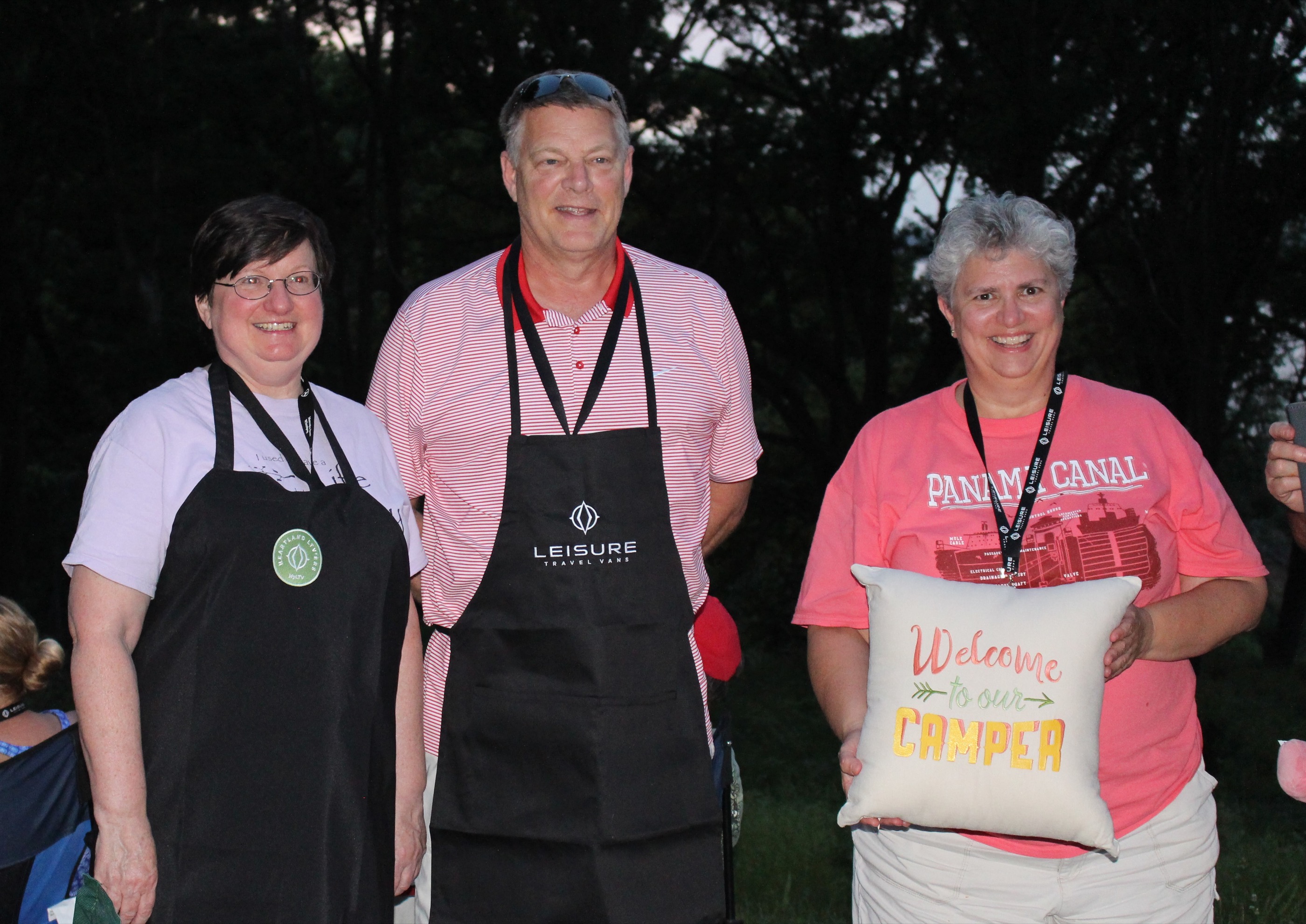 Saturday night LTV provided Amana bratwurst and condiments from Amana, Iowa. Andy did a great job cooking brats for 37 people. Additional potluck items were provided by the rest of the group. Lots of yummy dishes were shared! After dinner, five of the group headed into Knoxville, Iowa to watch the sprint car races at the Knoxville Speedway. The rest of the group spent time chatting and a few of us made a fire and sampled S’mores.

Sunday morning we gathered for coffee, coffee cakes and goodbyes. A few LTVs stayed an additional night, but most of us headed out by mid-day. Although the first two days were very hot and buggy, after the rain Saturday morning, it was very pleasant with a nice breeze.

Before, during and after the rally, some in the group explored the area. Pella, Iowa has a Dutch heritage and is known for tulips and windmills. In addition to the Knoxville Raceway, Knoxville is also home to the National Sprint Car Hall of Fame & Museum and Peace Tree Brewing. 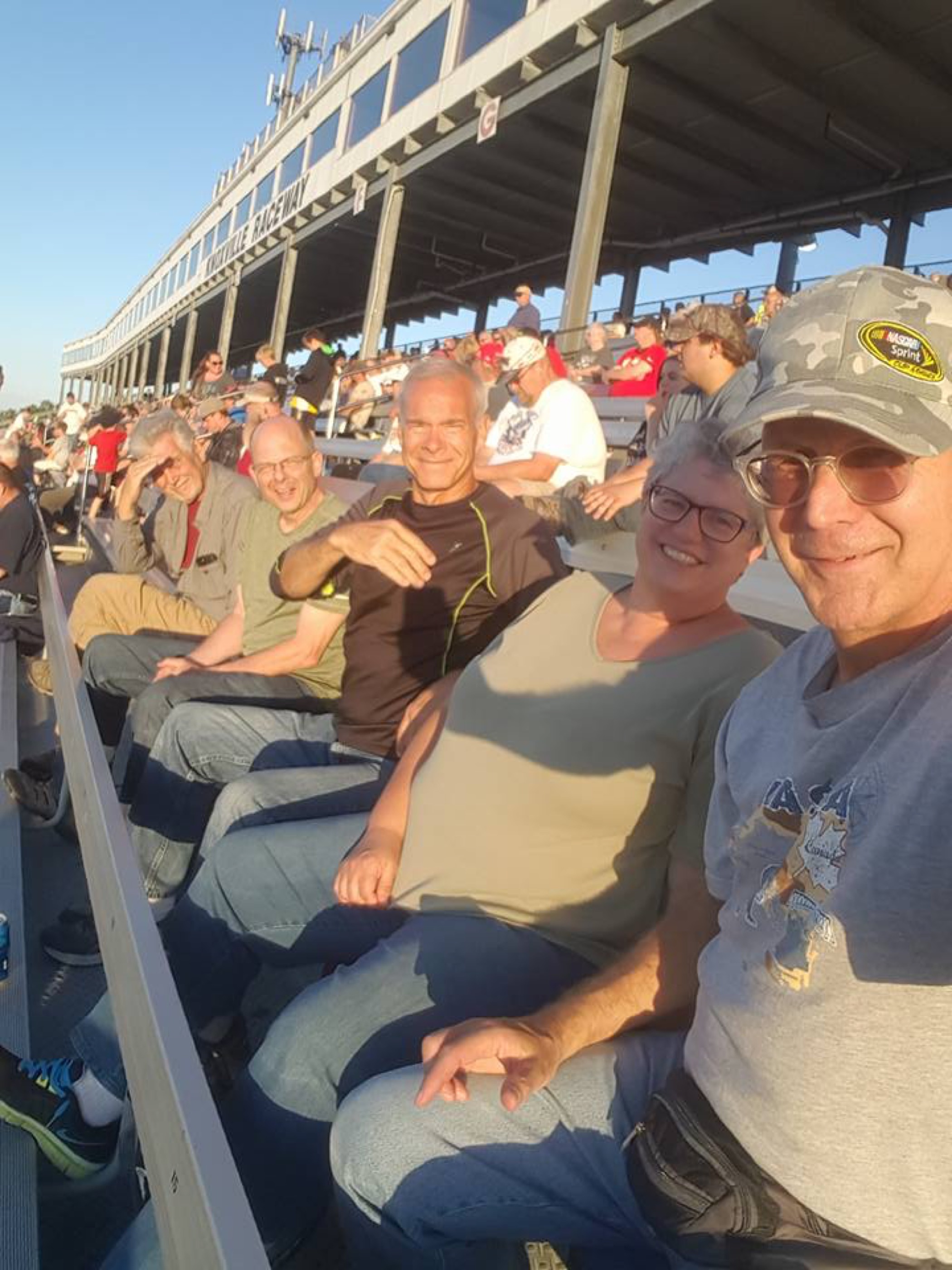 A few special stories from the weekend:

Earlier in the week, Lonnie received a text from his son about a Librero in a Kroger parking lot in Paducah, KY that at first, he thought was his dad’s. Lonnie was in his Jeep so he headed over to check it out. He met Rick & Chrissy from St. Louis. Both parties have 2013 Libreros. Rick told Lonnie about our rally and he contacted me to see if there were any spaces available and as luck would have it, a couple had just cancelled. Lonnie & Joan were a wonderful addition to our rally. 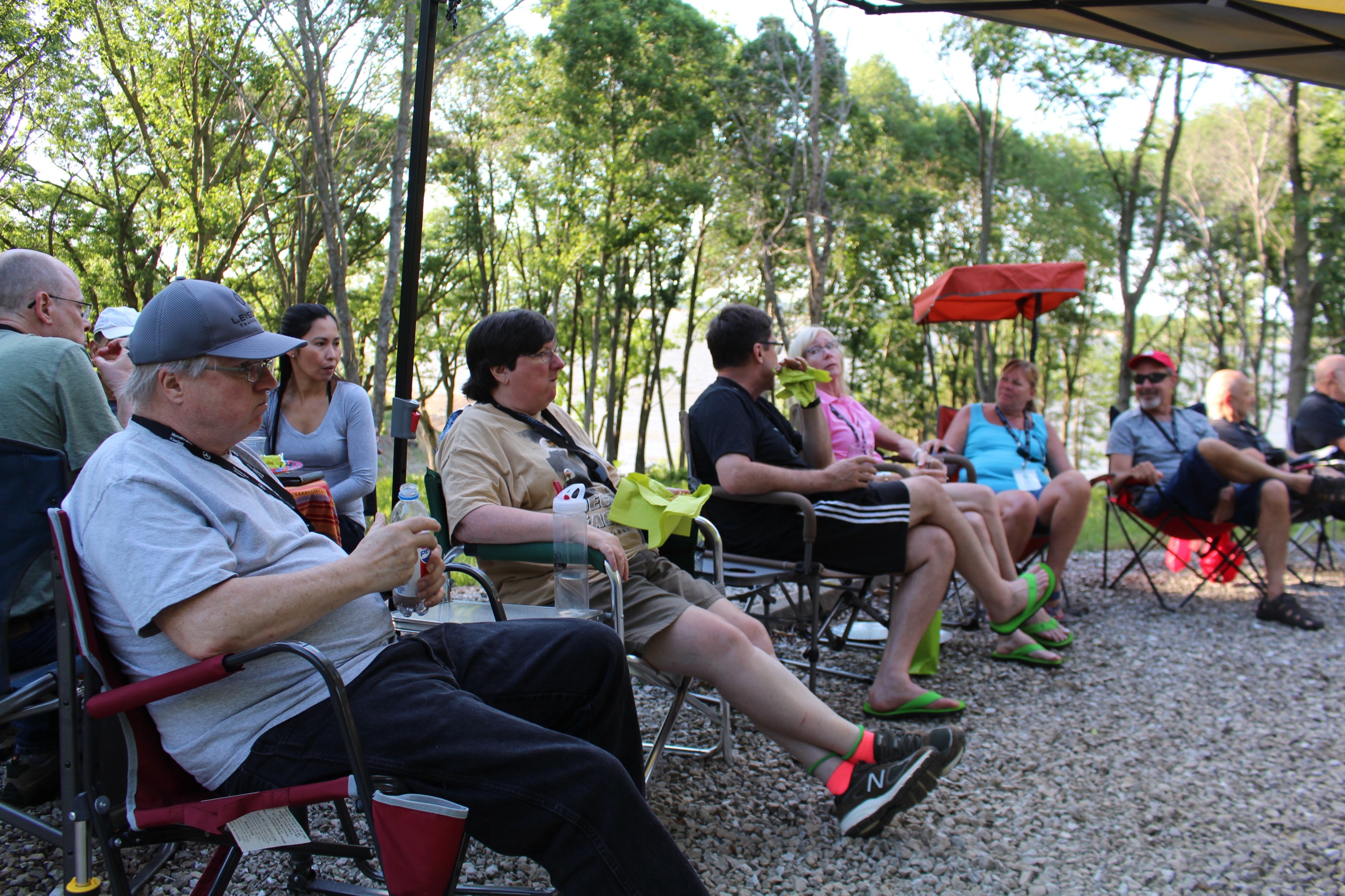 On Thursday, I was checking Facebook for any updates on people coming to the rally. I saw a post from Geneva S. that she was in Grand Island, NE and headed to the Missouri Star Quilt Company. I replied to her message and suggested that she wouldn’t be that far from our rally and that she should stop by. She did! Geneva is a full-timer currently headed from Oregon northeast eventually ending up in Nova Scotia. Many of us have read her posts on the LTV Enthusiasts page and it was a pleasure to meet her in person.

Regina loves bald eagles. She really wanted to see a bald eagle. The group tried to assist. One was spotted a couple of times when she was not present, but finally, he made an appearance for her.

Sam and Cristi travelled from Ohio to attend our rally. Cristi is a leader of the Leisurely Great Lakers. We met at the Winkler rally last year and we attended their rally in South Haven, MI last September. Their experience and encouragement gave me confidence in preparing for our first rally. Attending other rallies and speaking to other club leaders provided me with many great suggestions and ideas. Thanks to each of you!

We had expected our first rally to draw 8-10 LTVs. We were thrilled to have so many attend, especially since we were off the beaten track in rural Iowa. What a wonderful group of people brought together by the love of adventure and a very special company – LTV! Friendships were made that we hope to continue long into the future. Many are already looking for opportunities to cross paths again. Thank you LTV for giving us this opportunity to gather and meet our new friends!

Ann Dudler is the club leader for the Heartland LTV'ers. She loves exploring in her 2017 Unity MB with husband (Andy) and their two pugs.