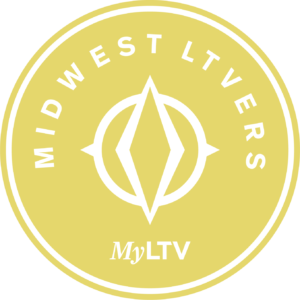 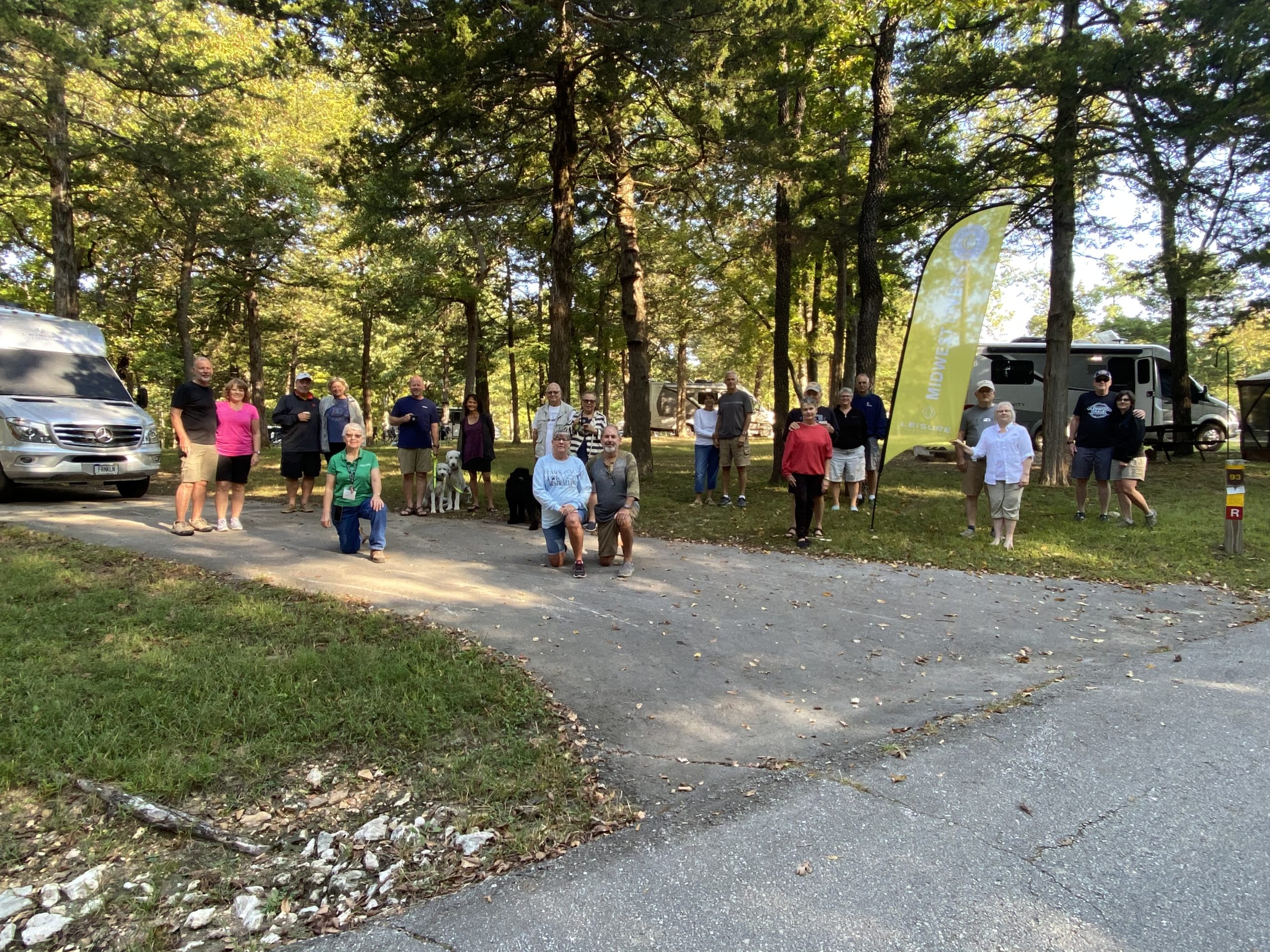 When I plan our Midwest LTV rallies, they are planned way in advance, and in this case, prior to COVID-19. Who would have thought it would still be hanging around? Not me, that is for sure. But we decided that if we social distance and use lots of hand sanitizer, staying in our Leisure Travel Vans was a safe place to be. So the Midwest LTVers Fall Rally was on.

We met up at the Lake of the Ozarks State Park campground in Missouri. This was most everyone’s first time in this area and it didn’t disappoint. The leaves were starting to change colors, some were even starting to fall, and the smell of campfires was floating through the air. We had deer wandering through the campground, along with a few nasty bees that thought our members were pretty tasty. 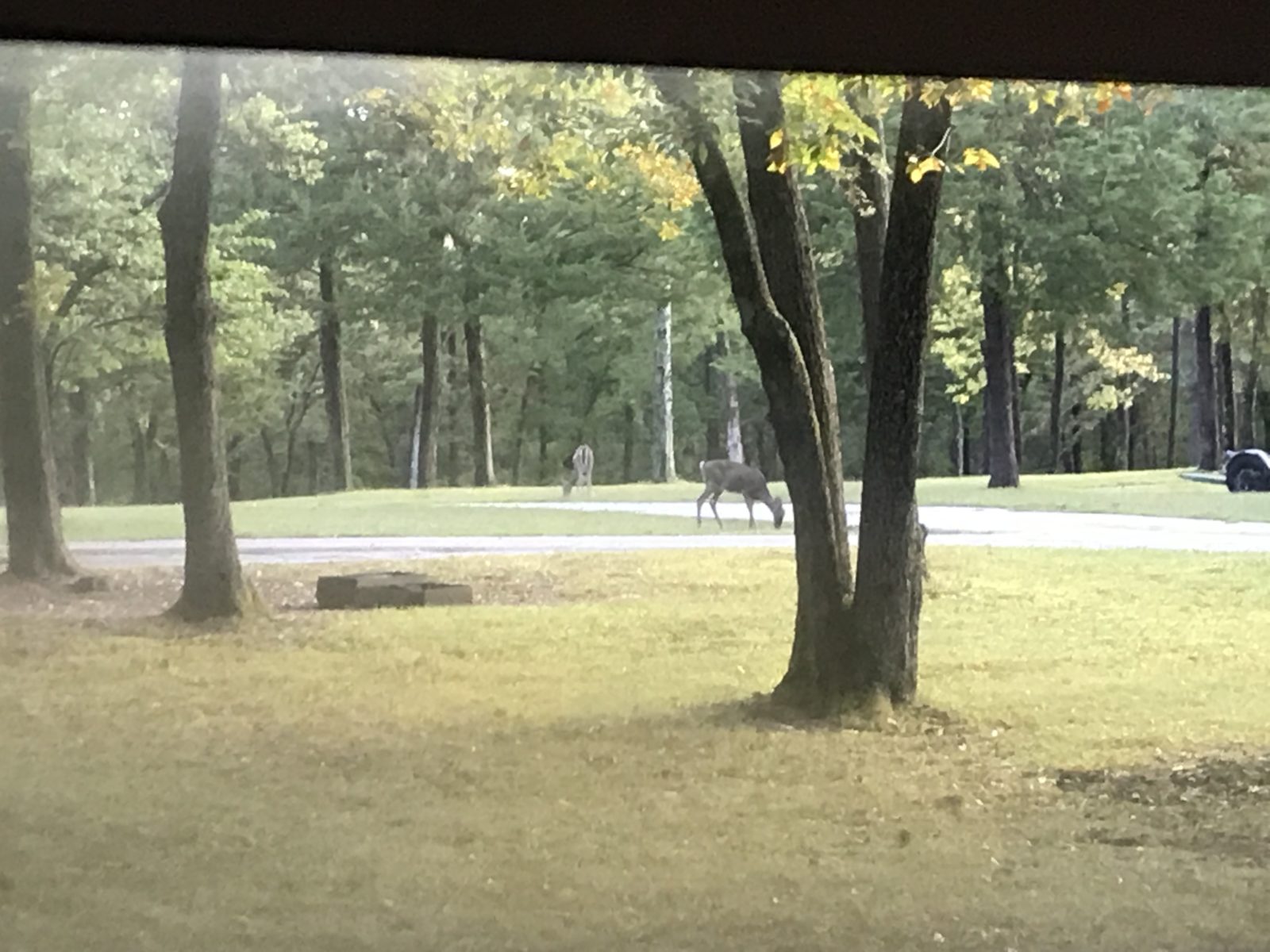 Excitement grew as we started to see all the coaches arriving. Everyone settled in, got hooked up, checked in (got their goodie bag), grabbed their chairs, and started to congregate in the open area behind our coaches (social distancing, of course). There is just something about LTV owners; even when we have never met before, we feel like we are instant friends.

Prior to the rally, I told everyone to bring a shirt that represented the state they reside in, and to wear it to our first get-together so we could give a good visual of what state everyone represented. And to encourage them, everyone that participated got their name in a drawing for an LTV prize. We had 99% participation. Prizes work!

Over the 5 days of our rally, we participated in several events, like, “Ruin-Your-Dinner Ice Cream Social” (one of the group’s favorite events), where we eat ice cream bars (provided by LTV) right before dinner! From meals together (normally we bring dishes to share, but I decided this wasn’t a good idea until COVID is over), to kayaking, to hikes through the leaves overlooking the lake, to bike rides and some games, I had to think about how we could have fun and still social distance, and I think I nailed it!

One of the games we played was a marshmallow game. I had everyone bring a bag of regular marshmallows and a plate. They thought they were going to roast them over the fire, but little did they know they were going to see how many marshmallows they could stuff in their mouths. Oh my gosh! This is the funniest game. The winner was Rob, with 13 regular-sized marshmallows! We also had 3 participants with a total of 12 marshmallows! The secret for those of us who were NOT participating was to get them to laugh – that is when it really gets funny! The plate was for participants to “show them again” so the marshmallows could be counted. LOL! Before the game started, we warned everyone to be careful not to aspirate any marshmallows. Fortunately, we had 3 doctors and a nurse (LTV owners) in attendance, just in case something went wrong. I am happy to report everyone had a great time!

The next morning after breakfast, the whole group went for a 2-mile walk through the forest and around the lake. It was beautiful! We stopped at the outdoor amphitheater and one of our group members brought their dogs and did tricks right there in the amphitheater. That afternoon we had a wine and cheese party where all participants brought their own cheese trays and wine. Nothing like relaxing and getting to know fellow LTVers. 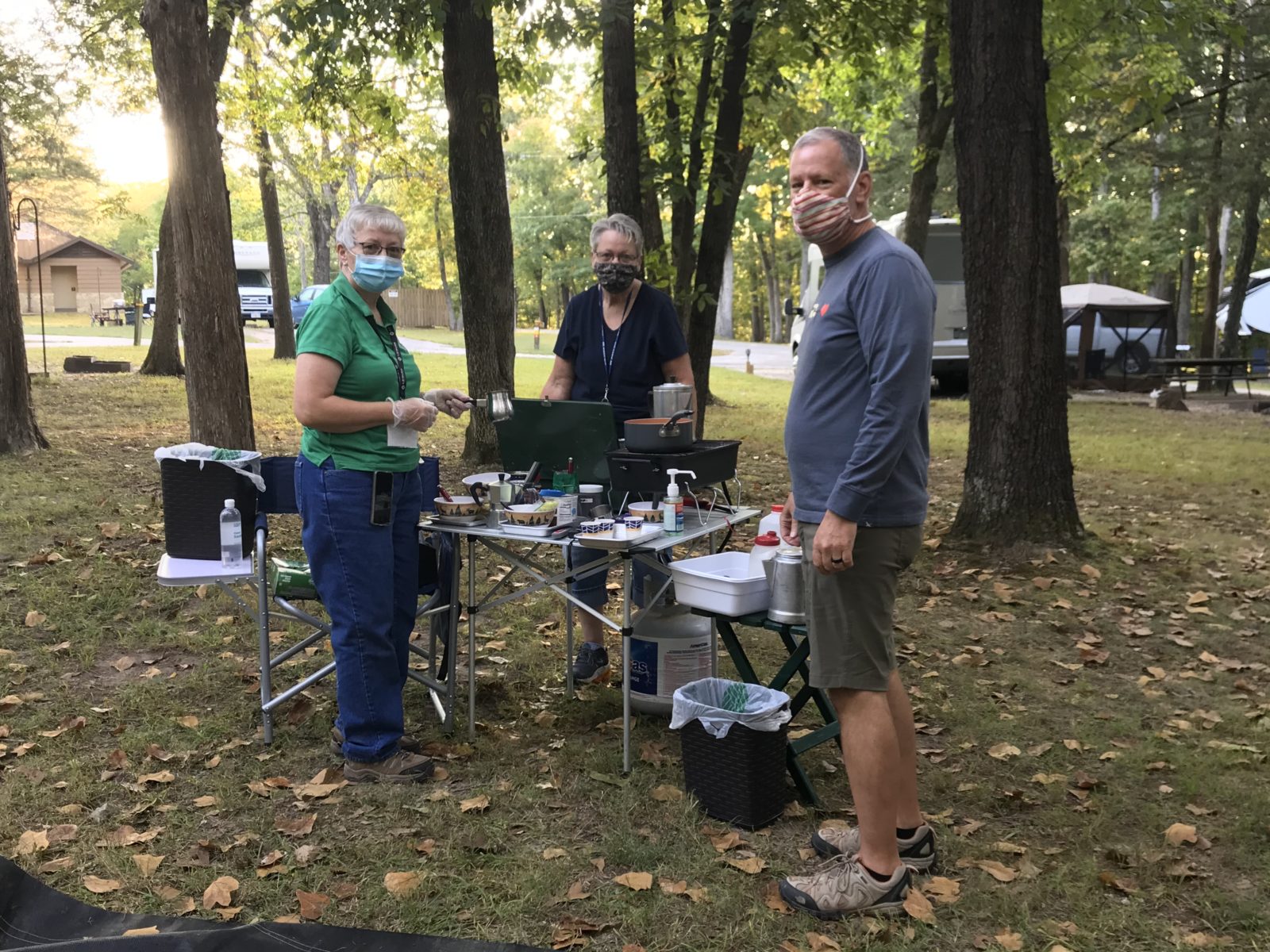 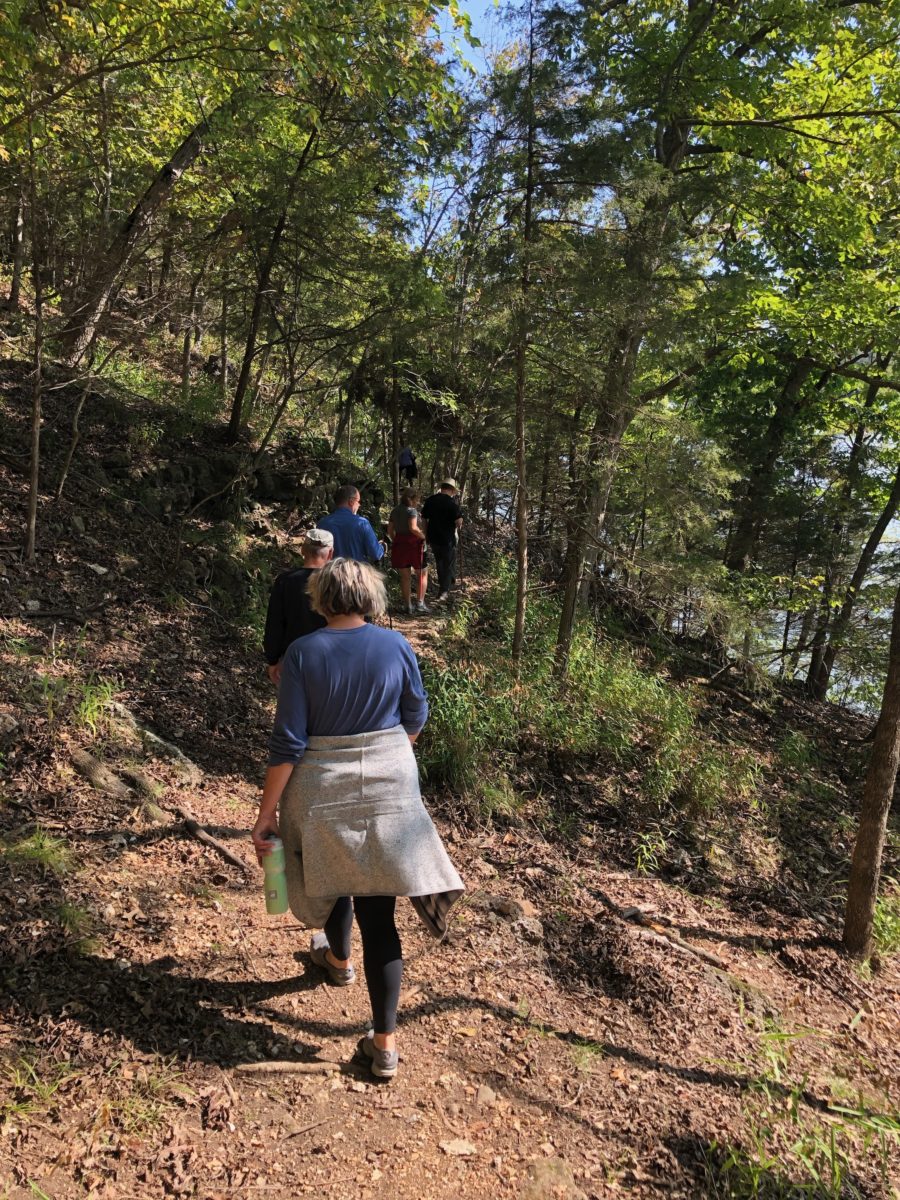 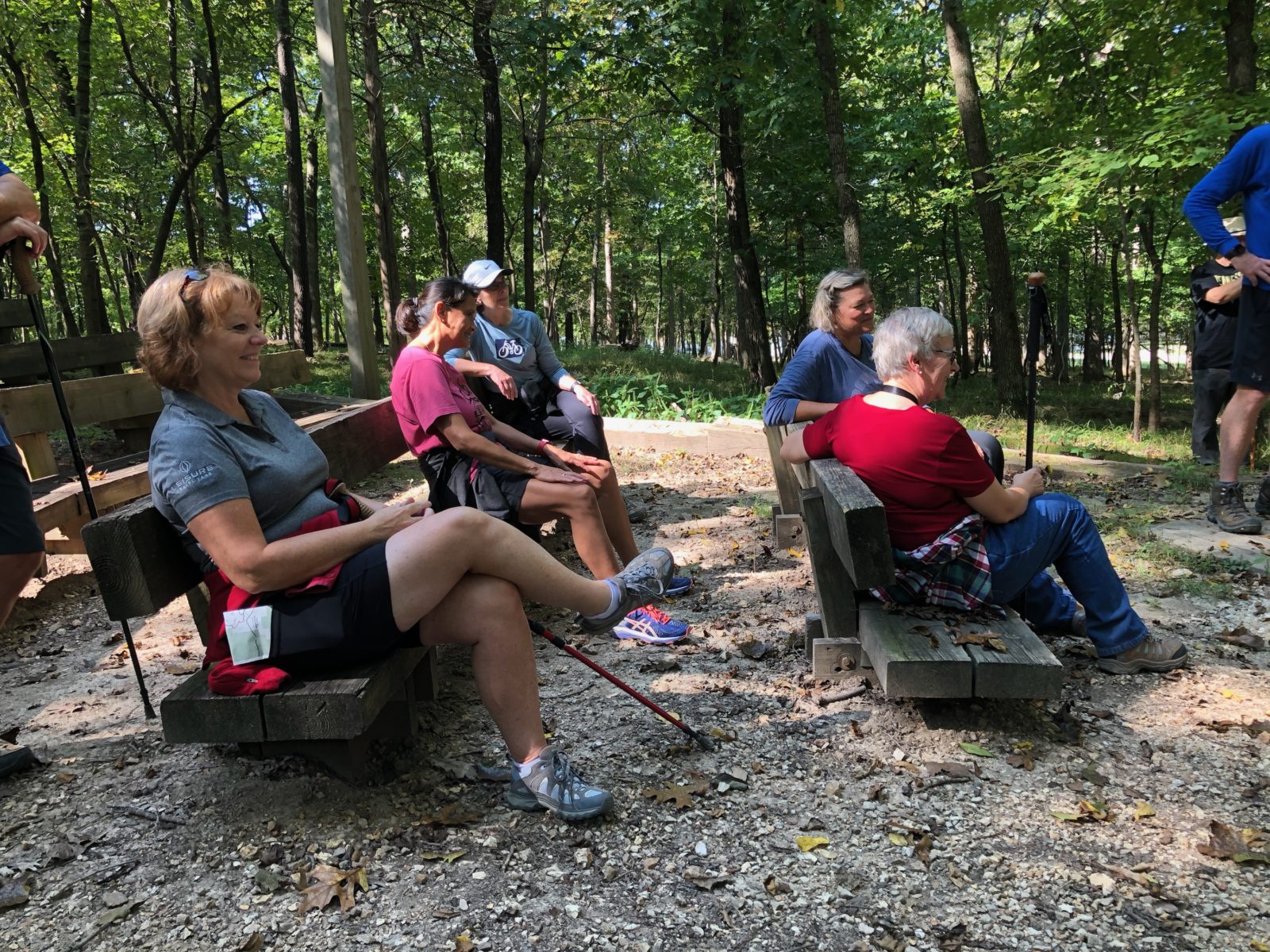 We had several more games, including 2 Truths and a Lie. I had everyone think of 2 truths and 1 lie about their LTV experiences. I provided everyone with a dry erase board that was still sealed, so we knew no one had touched them. We went around our circle and one couple at a time told their 2 truths and a lie, and everyone else wrote down on their boards which one was the lie. OH MY GOSH! There were so many good stories, it was so hard to tell which one was the lie! Not only was this a fun game, but it was also another great way to get to know each other and hear about the predicaments others had gotten themselves into as they have traveled around in their LTVs. Now we have a few more ideas of what NOT to do in your LTV! 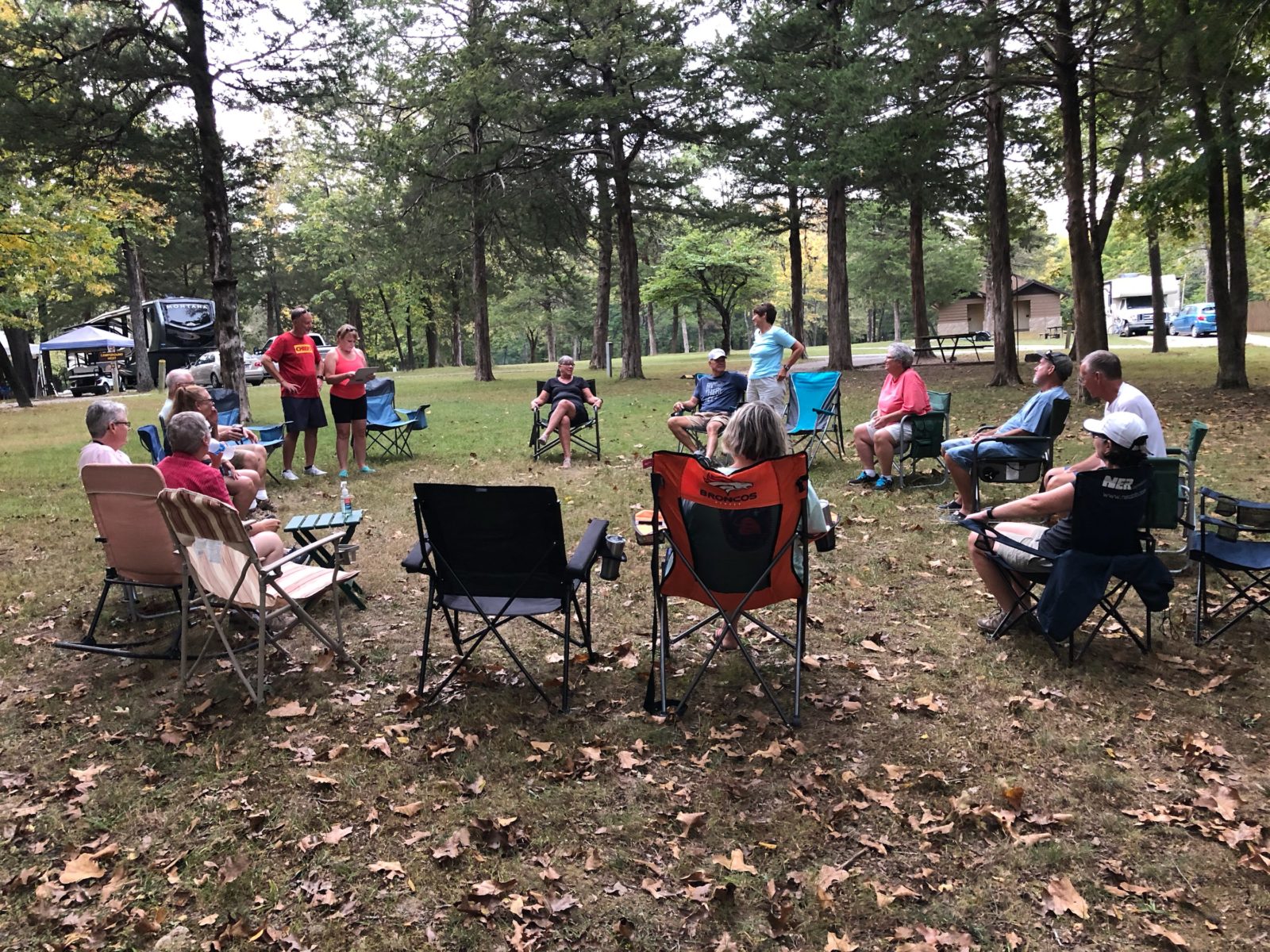 Saturday we rode bikes and went for walks, and some went go-carting, kayaking, and paddle boarding. We decided to kayak with a few others and saw some majestic eagles flying overhead. Some of the trees were turning their fall colors and it was just gorgeous with the sun reflecting on the lake. And so peaceful. Nothing like the sound of water splashing on the shore to wash away your worries. After dinner we had our third game. This was a travel trivia game. There were 20 questions, with a few bonus points for extensions on the original question. Everyone enjoyed that one and learned a lot! And yes, the largest ball of twine IS in Kansas! Seems to be a bit of a dispute on this. Minnesota has that claim too, but we quickly found out that Kansas was indeed the big winner of the largest ball of twine!

As our rally was coming to a close, we planned one last game. It was planned for the evening, but since we heard rain might be coming around 6:00pm, we decide to have it early. It was the Left/Right Game. Normally you play this by passing something around the circle, but with COVID, I decided to have everyone stand instead of pass. I wrote a story about traveling down to the rally. We started the game with the person who had owned their LTV the longest. They stood up. Every time I said “right”, the person standing sat down and the person on their right stood up. This continued around the circle as I said “left” or “right”. Everyone had so much fun that after the game was over, they wanted me to read the story backwards so they could stand up and down again. So I did. It was pretty funny!

As the rain was approaching, it was sad to retreat to our coaches, but we had so much fun participating in games and activities and getting to know everyone better.

We just love our LTV rallies and getting to know different people and making new friends. I have said it before and I will probably say it many more times – when you buy a Leisure Travel Van, you make a lot of new friends at the same time! 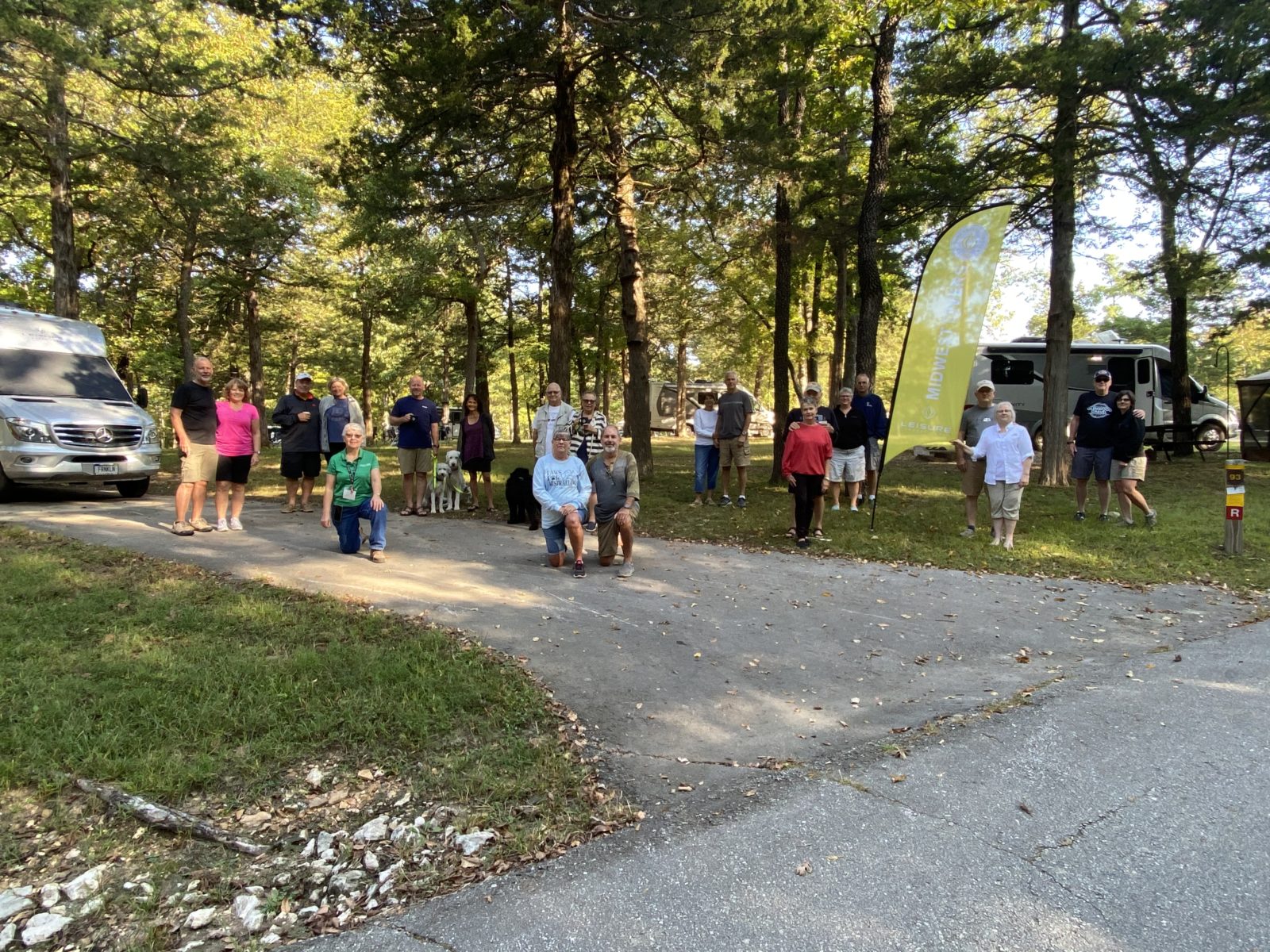