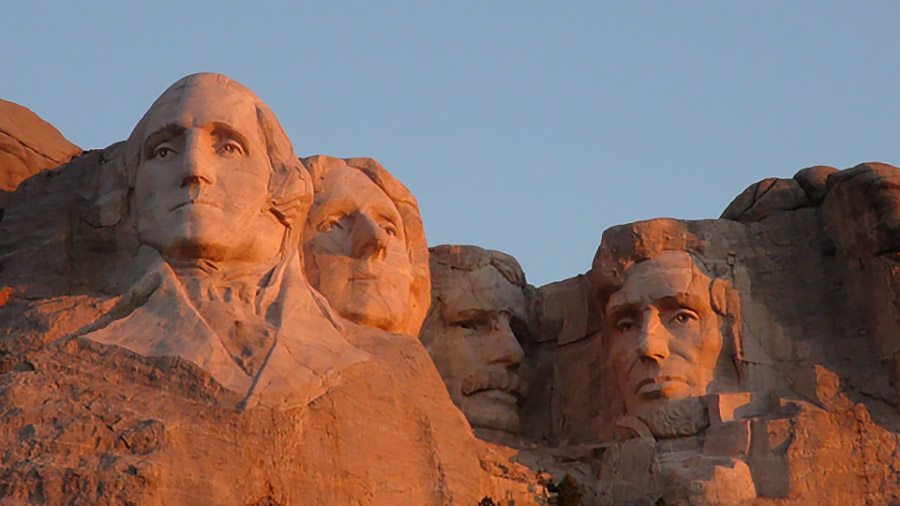 Have you ever wondered how they carved the monument at Mount Rushmore out of solid granite?

Do you picture a sculptor like Michelangelo, a solitary figure dangling perilously from a scaffold, chipping away with a hammer and chisel? What a surprise to find out that 90% of Mt. Rushmore was achieved through the efforts of over 400 people using dynamite and air hammers to remove the 450,000 tons of rock necessary to reveal the four 60 ft. tall Heads of State envisioned by the sculptor Gutzon Borglum.

Although the project was conceived as a way of attracting tourism to South Dakota —and has certainly succeeded, receiving over 3 million visitors a year— it has become a revered symbol of America.

The original vision was a carving of great western heroes like Buffalo Bill Cody, or Lewis and Clark, but Borglum had other ideas. He thought that portraying the men whom shaped this country would be more meaningful and have broader appeal. He chose George Washington, Thomas Jefferson, Theodore Roosevelt, and Abraham Lincoln, who represent the founding, expansion, preservation and unification of the United States. What began in 1927 and financed by the US government, the project lasted just 14 years without the loss of even one life. Originally Borglum had envisioned carving each President from the waist up, but funds for the memorial were cut off during WWII. The government decided that the monument was “good enough” like it is.

We arrived just after 6:00 pm, hoping to capture the iconic photograph of the four with the red glow of the descending sun lighting up their visages. Unbeknownst to us, the faces face southeast, so by sunset the heads are totally back-lit, and in the worst conceivable light for pictures. We realized that we would have to return at dawn, 5:20 am, if we truly wanted that shot.

No problem. The grounds are open from 5:00 am to 11:00 pm and admission is free. There is a hefty $11.00 parking fee, but at least the permit allows entrance for an entire year.

Manny is not exactly an early riser, so I was surprised at his enthusiasm for taking this picture, amazed that we actually did it, and delighted that we did. Besides getting a fantastic photograph, standing there in the quiet of the early dawn looking up at the men that shaped this nation was an awe inspiring moment we will never forget.

But not everyone is thrilled about this monument. Native Americans were stung by the construction of Mt. Rushmore in the Black Hills of South Dakota. The Six Grandfathers—the Lakota Sioux’s name for Mt. Rushmore—was part of the route that Black Elk, the great Lakota holy man and medicine man, had traveled on his spiritual journey. The Black Hills were considered sacred and had been granted to the Lakotas in perpetuity by the Treaty of Laramie in 1868. But when gold was discovered in the Black Hills, the U.S. government found a way to renege on the treaty and the land was taken back in the Great Sioux Wars of 1876.

The Lakotas decided they too wanted an impressive monument to honor their people, one that would not only rival, but dwarf Mt. Rushmore. So in 1948, Chief Standing Bear invited Korczak Ziolkowski, a prize winning sculptor from New England who had worked with Gutzon Borglum on Mt. Rushmore, to create a memorial to honor all North American Indians. Just 17 miles from Mt. Rushmore is the Crazy Horse mounument, the great Lakota warrior who defeated George Armstrong Custer at the Battle of Little Big Horn. This great hero, and compassionate leader, is the largest mountain carving in progress in the world and, when completed, will depict Crazy Horse riding a great stallion and pointing towards the land of his people.

In 1998, fifty years after beginning the project, the gigantic head of Crazy Horse was completed. It is so large that the four Presidents of Mt. Rushmore would fit inside it. Work on the horse’s head, which will be 22 stories high, is now in progress. The monument is being carved in the round and when finished, it will be taller than the Washington Monument and over two football fields in width.

When Ziolkowski accepted the challenge, I am sure he never realized that this project would become his life’s work. Shunning Federal Funding, there were days when it was Korczak and Korczak alone who faced that huge mountain, which he had to climb step by step after he got his old diesel generator “Kaput” going.

Many times, when Korczak was half-way up the mountain, the generator would sputter to a halt, exhaling the sound “kaput, kaput, kaput…” and Korczak would have to go back down and re-start Old Kaput. Although Korczak died in 1982, his wife Ruth along with 7 of their 10 children continued carrying on his vision. Ruth Ziolkowski passed away on May 21, 2014.

When Korczak Ziolkowski worked on Mt. Rushmore with Gutzon Borglum, he saw first hand how the government’s decision superseded the artist’s vision, how funding was cut off, and how the project was never really completed. He also knew the government’s history with Native Americans. Treaties and promises were continually being broken, and Korczak did not want that to be the legacy of the Crazy Horse Memorial. There is no completion date for the Crazy Horse Monument because, like all non-profits, funding is unsure. Money for the project is derived strictly through the entrance fee ($11.00 good for three days admission), as well as donations, and gift shop purchases.

Manny and I were lucky enough to take ride up to the base of the mountain, as close as possible to the ongoing carving of the monument. It was startling in its size and grandeur. We look forward to returning to visit the site periodically and to see the progress; it is fascinating to watch a dream on such a large scale be realized.