Have you ever had days when one thing leads to another effortlessly: where everywhere you go, everything you do, and everyone you meet seem to be placed perfectly in your path for your enjoyment? That was our experience of Nashville, Tennessee. 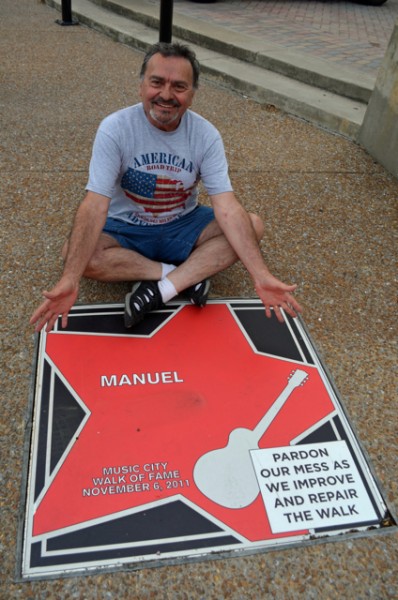 Even her trash is a star

Usually campgrounds near major cities are private, expensive, lacking any panache, and basically coasting on their sole asset: location. So imagine our surprise when we discovered that there was an Army Corps of Engineers Park, Seven Points Campground, just 10 miles east of Nashville. It was not only situated perfectly, it was one of the cleanest, most quiet, and idyllic parks we have ever seen.

Since we are 2 adventurers, we typically don’t stay very long in any one place. Here, we set an all-time record of 8 nights, at the bargain rate of just $10 a day. (Gotta love that Senior Access Pass.) Manny caught up with his video editing and I on the blog writing, with a few added days of relaxation.

Driving on an interstate into a strange city can be one of the most difficult and stressful parts of a day trip. Multiple highways converge; huge tractor trailers whiz past you as if you are standing still; different color signs with route numbers, street names, and exits fly by; tempers flare while your GPS tells you you’re too late to take the next left. Fortunately for us our savvy camp host, Gene Waters, told us of a back road directly into downtown Nashville, so we were able to avoid the busy and tumultuous Highway 40, and cruise right into the center of the city without any tension, stress, or arguments.

The second most difficult aspect of arriving in a new city is finding a good parking spot, especially with a 25 ft. long vehicle. Nashville has a great interactive map of parking lots all over the city, which includes cost, number of spaces, and a picture of the premises. I called the phone number provided to find out which lots had double spaces and where we might have the best chance of finding a place to park Serena. When I was forced to leave a message I figured we were on our own. Once again, we were amazed when we actually received a call back, and the friendly fellow recommended a great lot that was easy to access, incredibly cheap – $10 for 12 hours, and right in the middle of downtown. He even suggested we look for an end spot so we could back in and fit neatly into one space. If you are driving into Nashville, check out the First Baptist Church lot at 126 7th Ave South.

Rather than book expensive seats at places like the Grand Ole Opry, where video cameras and iPod filming are strictly forbidden, we continued our musical odyssey in small venues. We hit the “honky tonk” row of bars along Broadway between 4th and 5th Avenues, that feature live music from 10 a.m. onwards… That’s right, 10 o’clock IN THE MORNING. You stroll along and when you hear something you like, you head on in.

I have to confess that my expectations weren’t too great.  I had read some reviews on Trip Advisor complaining of overpriced drinks, rude waiters, and lousy music. Our experience was the direct opposite: fair prices for free entertainment, friendly and polite service, and some great music. I had hoped, but didn’t expect, to find another Willie Nelson or Reba McEntire, but we were astonished to hear some real talent. There were moments when I actually thought that the bad boy Johnny Cash had somehow incarnated, when the familiar strains of his popular Folsom Prison floated out of the doorways of many local bars. I suspect that there is an abundance of good musicians who head to Nashville with high aspirations, and that restaurants and bars have their pick of quality artists to lure customers.

I will admit that the meals we had at the local bars were not much more than mediocre, so I asked several locals about a good eatery. Each one immediately answered with a resounding, Demos. A family owned business founded in 1989, this place was perfect: quality home cooking served in a warm and inviting atmosphere by the friendliest staff we have ever encountered. Everyone from the busboy to the cashier behaved as if we were the very customers they hoped would grace their humble establishment that day. 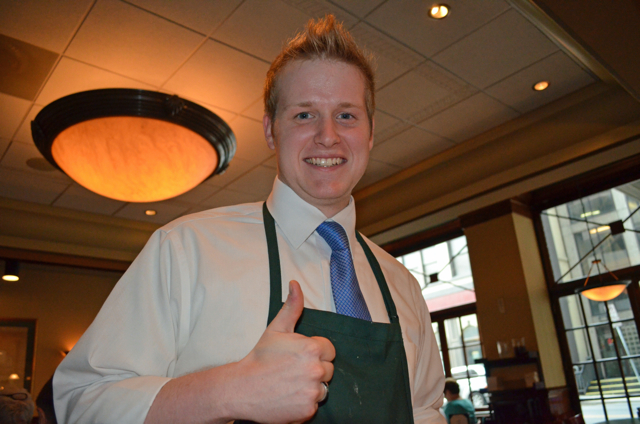 Our personable waiter, Mason Lee, turned out to be an aspiring singer/songwriter, who had graduated with a degree in music and was hoping to advance his career in Nashville. I have a hunch that one day his positive attitude and perseverance will pay off and we will say, “Hey, I remember that Country star. He served us dinner at Demos in Nashville!”

We did notice that, unlike Asheville, NC, there were very few street performers, particularly on the more popular blocks. One musician told me that if you don’t have a panhandler’s license, you have to know when and where the more lenient policemen are on duty, otherwise you might be subjected to a $50 or more fine.

So imagine our delight when we came upon an energetic performance by two beautiful harpists right on the sidewalk on Broadway. A mesmerized crowd quickly formed as the accomplished duo played melodies worthy of any concert hall. When they were offered money, they turned it down and explained that they each had a solo career but they were promoting their combined talents as the duet, Beyond Pluck. If you have the opportunity to hear Rachel Miller or Paula Bressman together or separately, you are in for an incredible treat.

We thought we’d end this magical day by walking across the famed pedestrian bridge to catch a good shot of the cityscape. Here, we had the good fortune of running into a sexy singing Nashville trio, two sisters and their mom, Emily, Lindsay, and Kate, known as Lucy Angel. 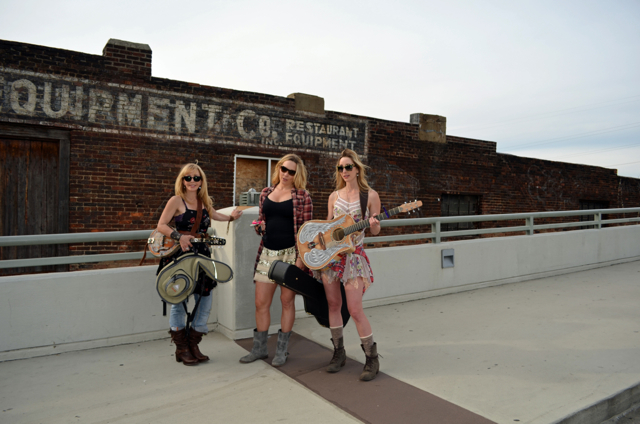 They were there to shoot some footage for a promo of their new single, Crazy Too. Since the song is about a guy that makes all his girlfriends crazy, they plan to interview couples about what they can’t stand about each other. Even though they hadn’t planned to shoot that part then, Emily, Lindsay, and Kate decided to take advantage of meeting us to film Manny and I. We’ve never been to couples’ counseling, but this interview was just as revealing. I guess you’ll have to watch for Lucy Angel’s new single, Crazy Too, to find out why.

Here’s a little taste of our Nashville experience.