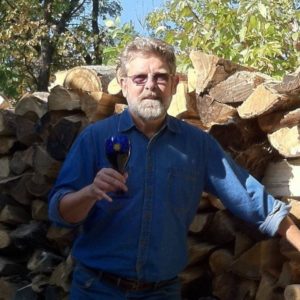 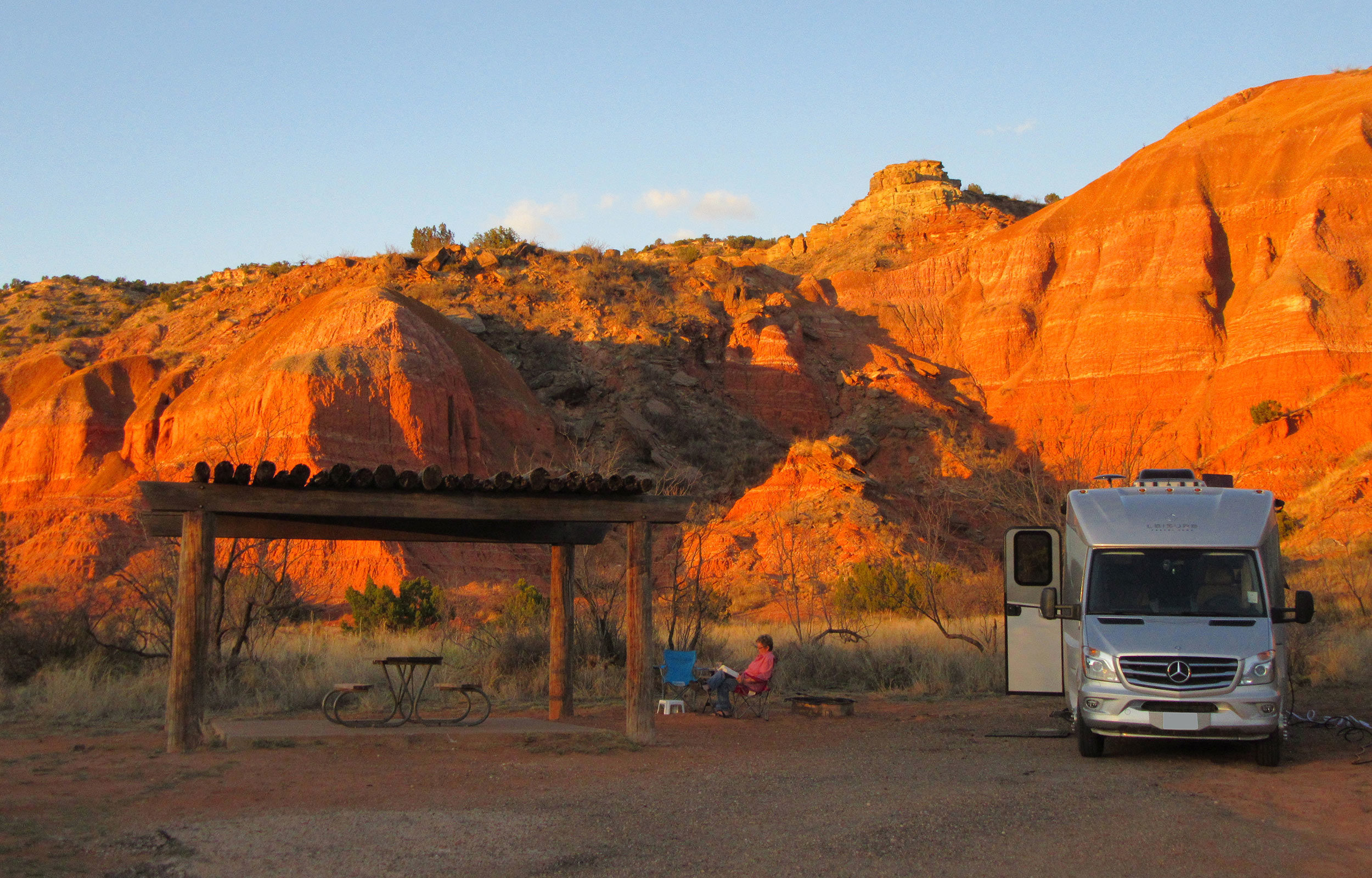 Palo Duro Canyon, the second largest canyon in the United States, lies in the heart of the Texas Panhandle near the city of Amarillo and it is a fascinating slice of scenery and history.

Water erosion over the millennia has shaped the canyon’s geological formations. Palo Duro Canyon was formed by water erosion from the Prairie Dog Town Fork of the Red River. The water deepens the canyon by moving sediment downstream. Wind and water erosion gradually widen the canyon. Palo Duro Canyon is presently 120 miles long, as much as 20 miles wide, and has a maximum depth of more than 800 feet. Its elevation at the rim is 3,500 feet above sea level. It is often claimed that the Canyon is the second largest in the United States with the Grand Canyon being the largest at 277 miles long, 18 miles wide, and 6,000 feet deep.

At every turn, there are dramatic geological features, including the multicolored layers of rock and steep mesa walls similar to those in the Grand Canyon. Notable canyon formations include caves and hoodoos. One of the best-known and the major signature feature of the canyon is the Lighthouse Rock. A multiple-use, six-mile round trip loop trail is dedicated to the formation.

While Palo Duro is almost indescribable, the painter Georgia O’Keeffe, who lived in nearby Amarillo, wrote of the Palo Duro:

“It is a burning, seething cauldron, filled with dramatic light and color.”

Hard to argue with that description. Humans have resided in the canyon for approximately 12,000 years, and it is believed to have been continuously inhabited to the present day. Native Americans were attracted to the water of the Prairie Dog Town Fork, Red River, as well as the consequent ample game, edible plants, and protection from the weather the canyon provided.

Early settlers were nomadic tribes that hunted mammoth, giant bison, and other large game animals. The first European explorers to discover the canyon were members of the Coronado expedition, who visited the canyon in 1541 and dubbed the canyon “Palo Duro”, Spanish for “hardwood” in reference to the abundant mesquite and juniper trees.

Apache Indians lived in Palo Duro at the time, but they were later displaced by Comanche and Kiowa tribes, who had the advantage of owning horses brought over by the Spanish. They had contact with traders, called Comancheros, in nearby New Mexico. A United States military team under Captain Randolph B. Marcy mapped the canyon in 1852 during their search for the headwaters of the Red River. The land remained under American Indian control until a military expedition led by Colonel Ranald S. Mackenzie was sent in 1874 to remove the Indians to reservations in Oklahoma. Soon after, in 1876, Charles Goodnight and a wealthy Ulster Scot named John Adair established the JA Ranch in Palo Duro Canyon. Col. Goodnight helped manage the ranch until 1890. At its peak, the ranch supported more than 100,000 head of cattle. Goodnight operated the ranch until 1890 and, although only a fraction of its original size, the JA Ranch remains a working ranch today. 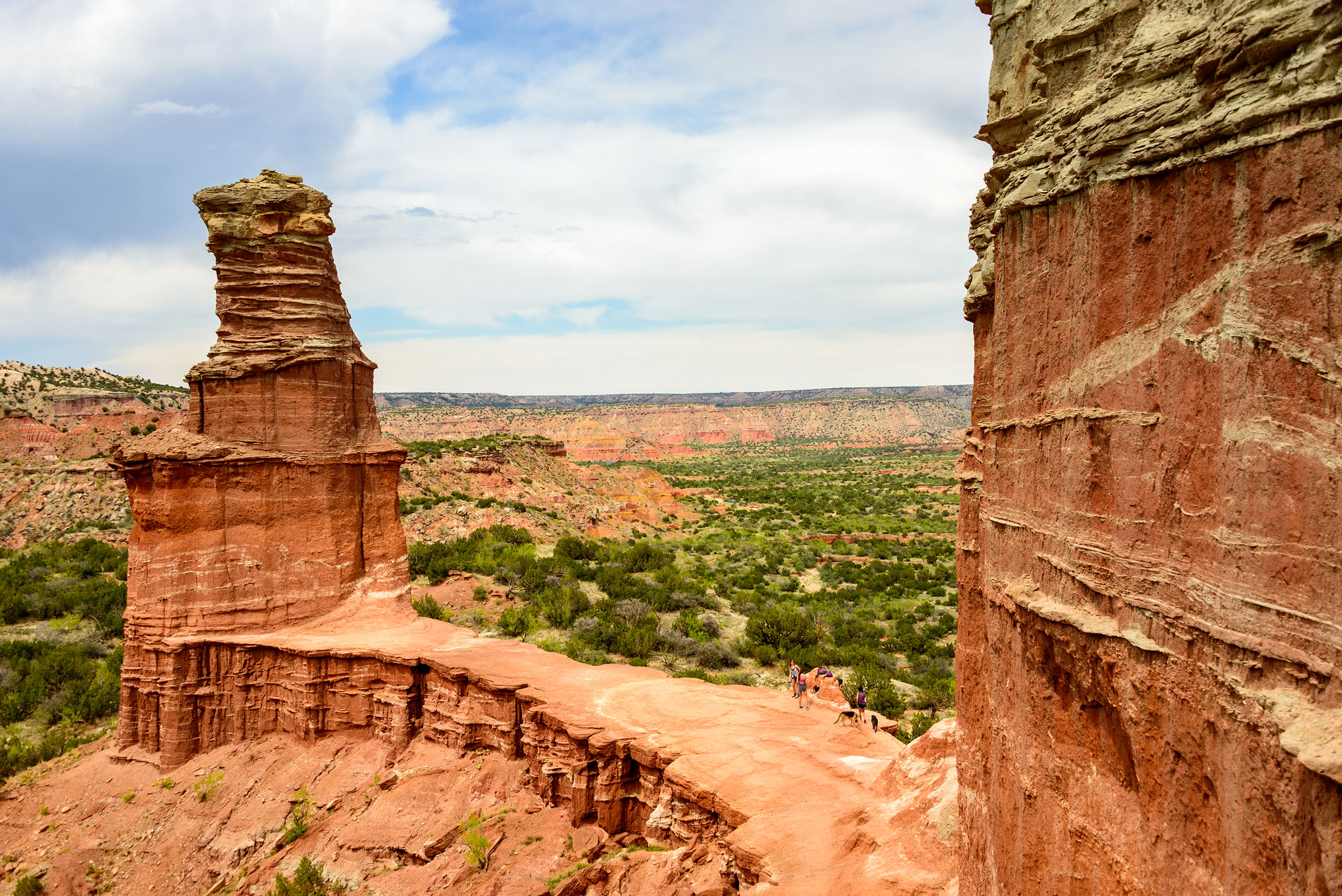 The Civilian Conservation Corps of the 1930’s constructed most of the buildings and roads still in use by park staff and visitors. Palo Duro Canyon State Park opened on July 4, 1934, and contains over 29,000 acres of the scenic, the northern most portion of the Palo Duro Canyon.

Unlike its big brother, the Grand Canyon, the bottom of this canyon is accessible to vehicles so the rugged beauty can be enjoyed from top to bottom. There are more than 30 miles of hiking, biking, and equestrian trails so the beauty and wonder of Palo Duro can be explored by foot, mountain bike, horse, or vehicle. Other options include geocaching, studying nature, and bird watching.

While we missed out during our summer tour, the outdoor musical drama TEXAS is performed during the summer camping season. Park information notes that TEXAS runs Tuesdays through Sundays at the Pioneer Amphitheater and tells of the stories, struggles, and triumphs of early settlers. The family-friendly show has singing, dancing, fireworks, and lots of Texas humor. RV campsites are served with water and electricity. Visitor options include drive-up sites, equestrian sites, backpack camping areas and cabins on the canyon’s rim and on the canyon floor. The exceptional Visitor Center on the canyon rim offers amazing canyon views and the opportunity to learn more about the park. The park store at the Visitor Center sells books, pottery, jewelry, and more. There are also souvenirs, snacks, and meals available at The Trading Post on the canyon floor.

If horseback riding is desired, there are trails through 1,500 acres set aside for horseback riding or share two other trails with hikers and mountain bikers. Ranger programs include presentations on the park’s history, natural features, the park family of Longhorn cattle and there are opportunities to take a driving tour with a park ranger.