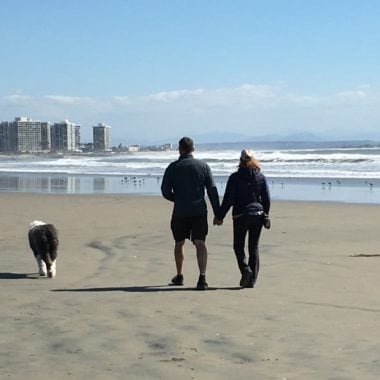 My wife, our Old English Sheepdog (‘Chloe Bear’) and I embarked on a year-long cross-continent journey in our new 2016 Unity Corner Bed Leisure Van. It was a wonderful trip and we’re happy to report that we had almost no mechanical difficulties along the way. This was amazing because our Leisure Van seems to have more onboard electronic systems than the space shuttle. There was, however, one exception. We had just arrived in Bay City, Michigan and were setting up at the Bay City State Park. We had run our air conditioning unit for most of the early evening trying to cope with the heat and humidity. This was the first time we had used the AC for an extended period of time and everything was working fine. As we prepared to retire for the night and having cooled down the RV, we shut off the AC and turned on the ‘Fantastic Fans’ for ventilation. Off to bed, we went. 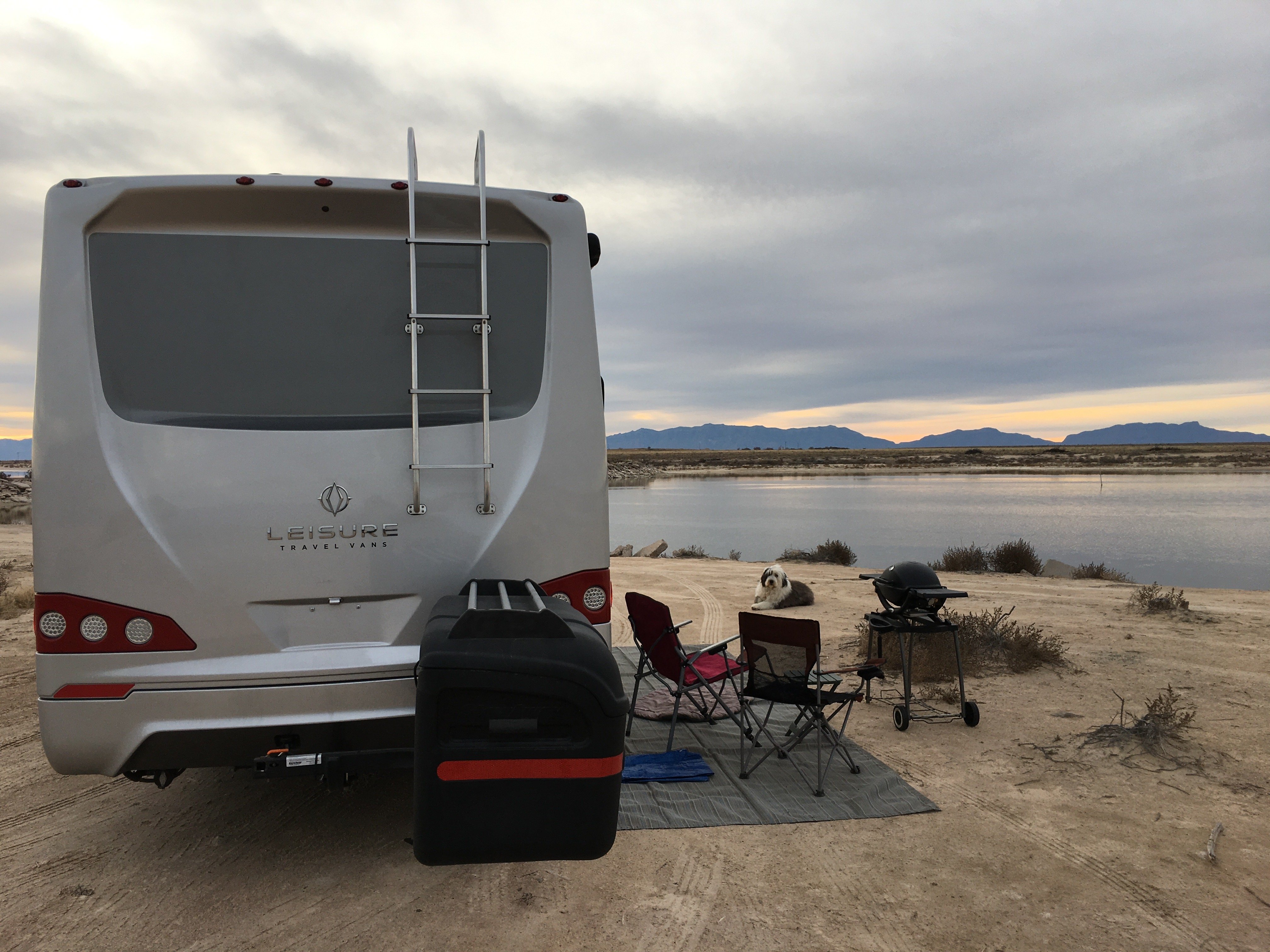 Then, at 12:30 in the morning, we were woken up by an ear-shattering alarm. We both leapt out of bed and the Bear scrambled off the floor onto her bed. It sounded like a smoke detector, but because of the close confines of an RV, and the way the deafening sound bounced around, it was difficult to find the source (and we had been dead asleep). Finally, after about 30 agonizing seconds, we found the alarm at the bottom of the fridge. It was the propane detector. 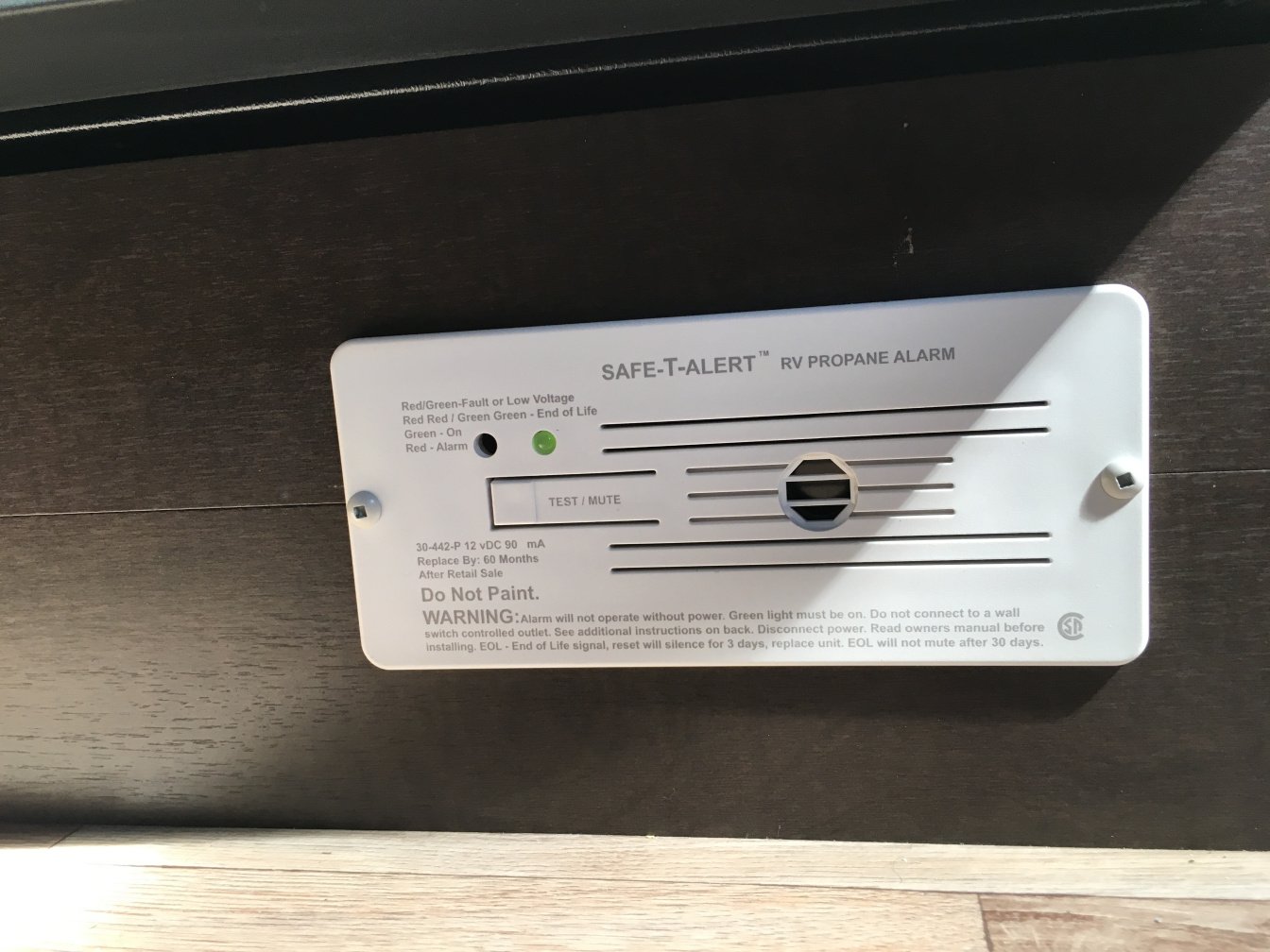 Right after locating the alarm, the ear-piercing beeping stopped. Our hearts now racing, we immediately tried to figure out if there was any danger. There was no smell of propane, but we knew from previous years of living on a sailboat and the associated hazards of LP gas settling in the bilge, that propane is heavier than air so would be at floor level. We opened the door and tried to create some air flow. We checked the stove top to see if either of the knobs were on (no) as well as the fridge to see if we forgot to switch from propane to AC electricity (nope). Then we wondered if something associated with the air conditioner had set it off but couldn’t figure out why that would have happened. With no clear answers, we went back to bed.

Fast asleep, at 2:30 am, we were woken again by the deafening alarm. Same drill: the Bear scrambled off the floor onto her bed and we jumped up to see what was going on. This time the alarm only lasted for about 10 seconds. My wife wondered if it was detecting our 5 lb tank for the BBQ in a rear exterior locker, so we went out to check if the valve was open (no). We turned off the main propane switch from the rear control centre then decided to consult the owner’s manual for any clues. There wasn’t any, other than reinforcing that an alarm sounding posed a dangerous situation and it instructed to ‘Have a qualified service person find the leak and correct the problem before using the motorhome.’ 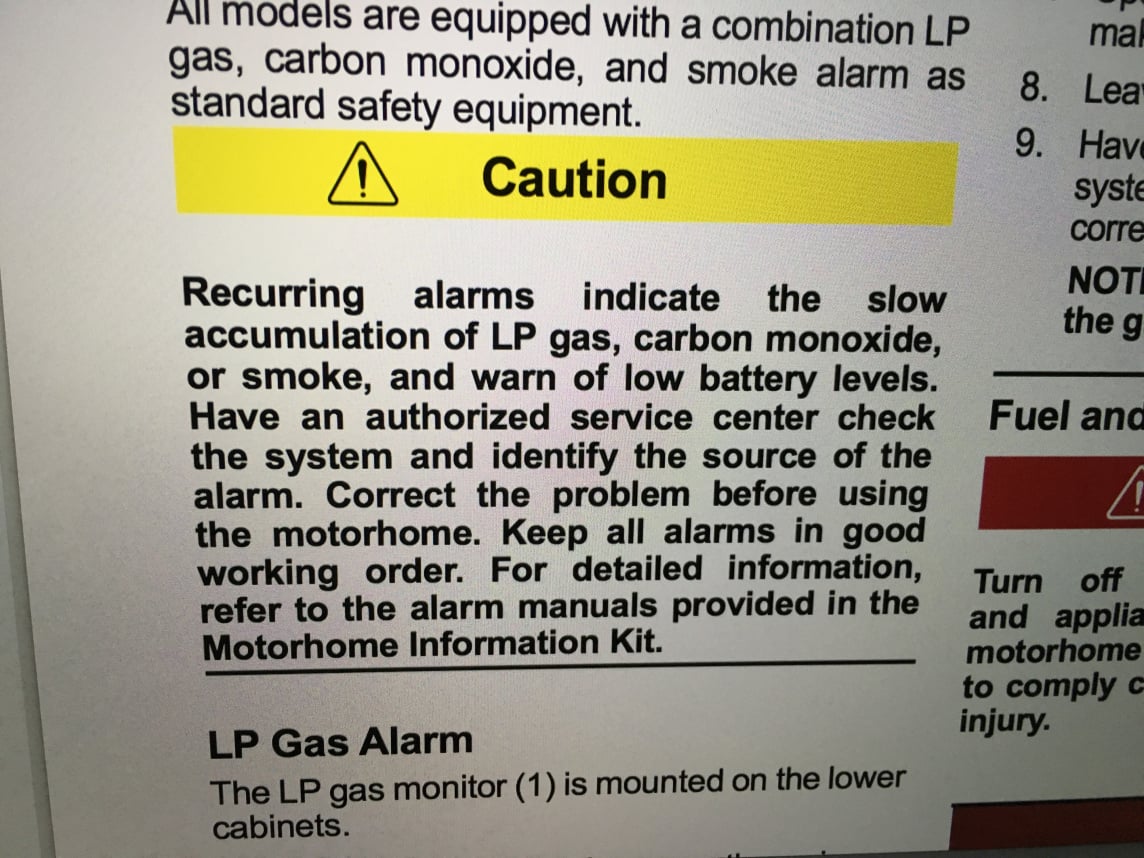 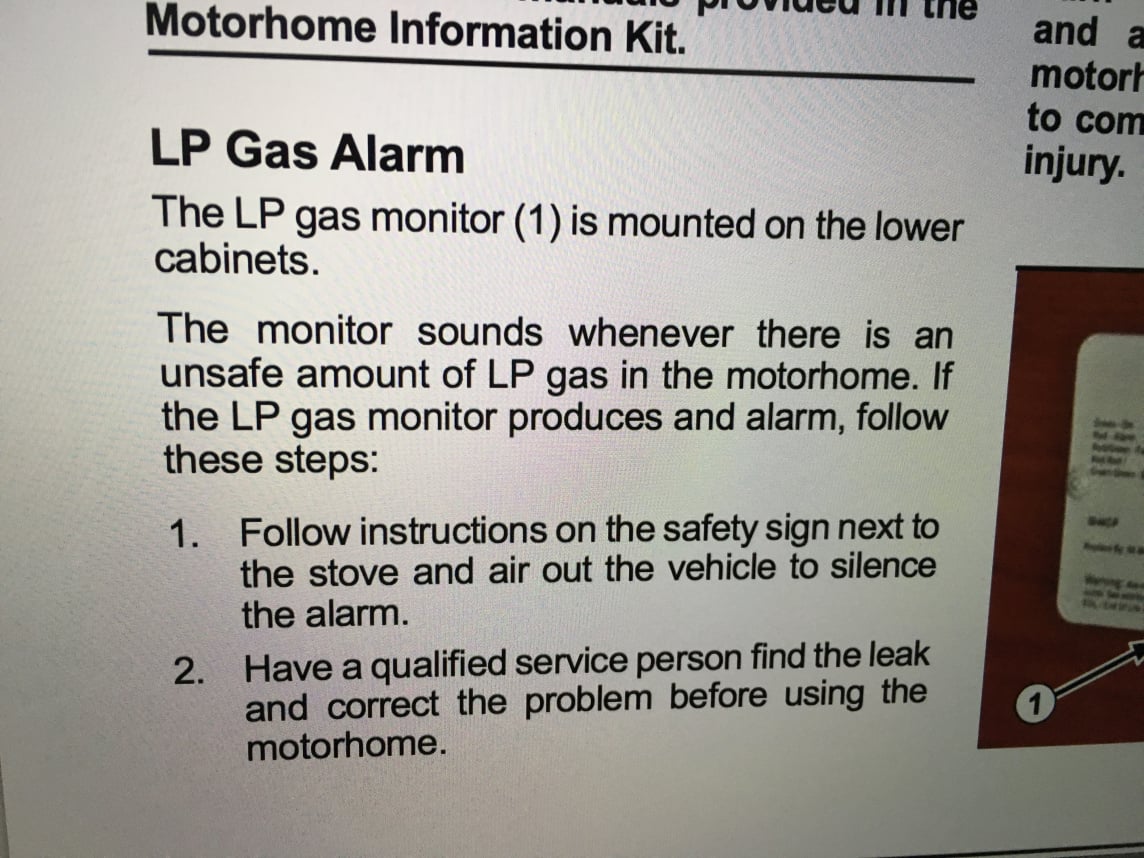 A leak? That obviously didn’t sound good. We went back to bed hoping that turning off the main propane switch would temporarily resolve the problem until we could call the Leisure Van factory for assistance. It was Friday night so we would have to wait until Monday.

The alarm didn’t sound again over the weekend and because we were staying with friends and family for the next few weeks, we left the propane switch off. But it was in the back of our minds – you can’t ignore a recurring gas alarm, particularly after reading all the warnings.

So after contemplating that fateful evening, and reviewing all the factors that led to the alarm sounding, one commonality came to mind. The Bear had been sleeping on the floor near the fridge on both occasions. Maybe she had hit the test button with her paw… 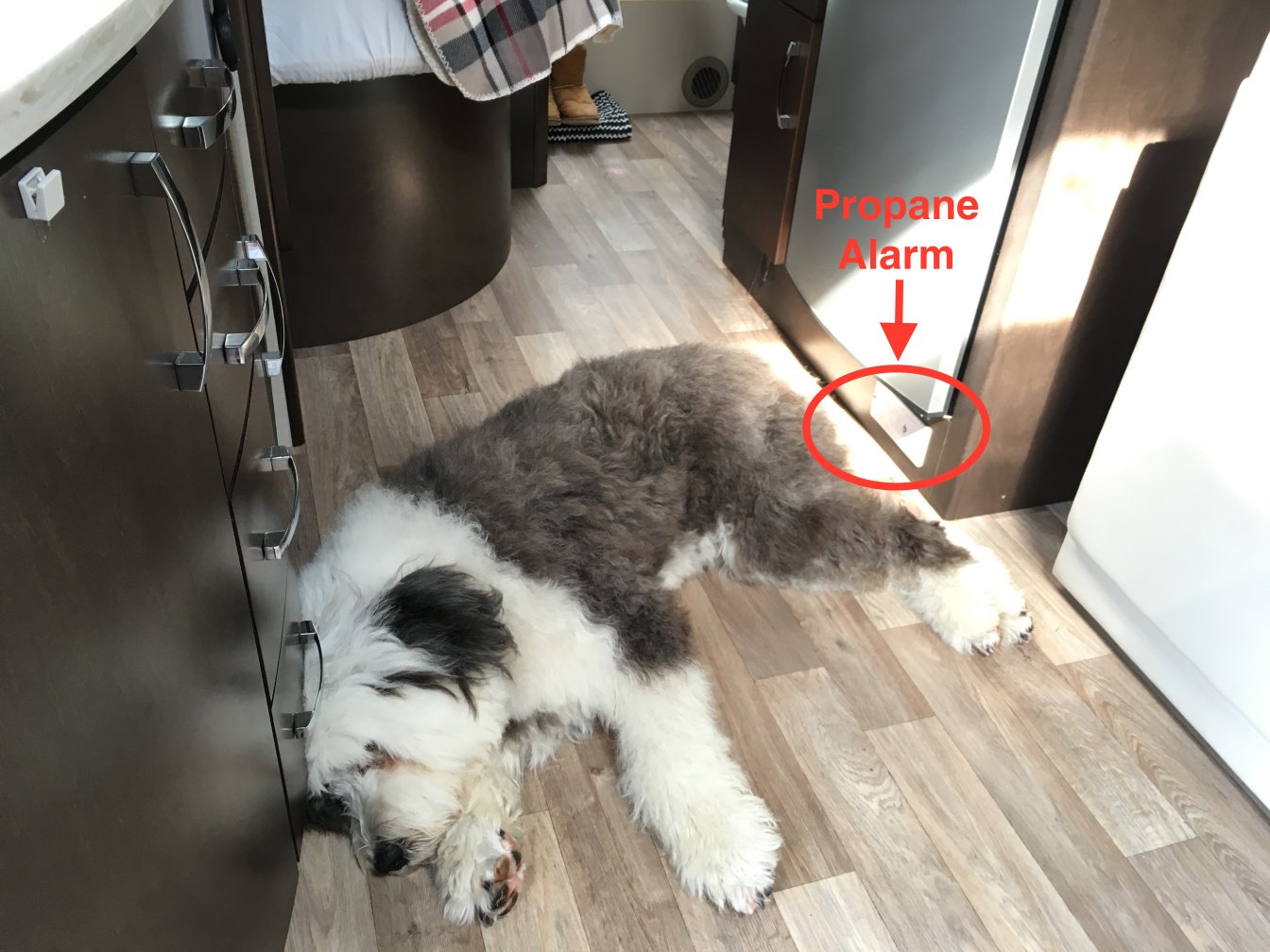 No, that couldn’t be the cause. The test button just sends a single, sharp beep. But hang on, could it be something else…? The Bear had been given some leftover sausage in her dinner that night and soon after, had been breaking wind with some amplitude. Was it possible that her flatulence and close proximity to the propane detector had triggered the alarm? We decided to consult the Internet, Googling ‘can a fart set off a propane detector?’ and were astonished to see the hundreds of results. Numerous RV forums and chat groups described all the various causes of a false (non-propane) alarm sounding: hairspray, bug spray, air fresheners, a dog farting… What? A dog farting! This is common? Well, apparently it is. There are even YouTube videos demonstrating the phenomena. Geez, maybe the Leisure Van manual should add a line to it’s warning instructions, such as: ‘No need to consult a trained technician if you have an odoriferous dog.’ 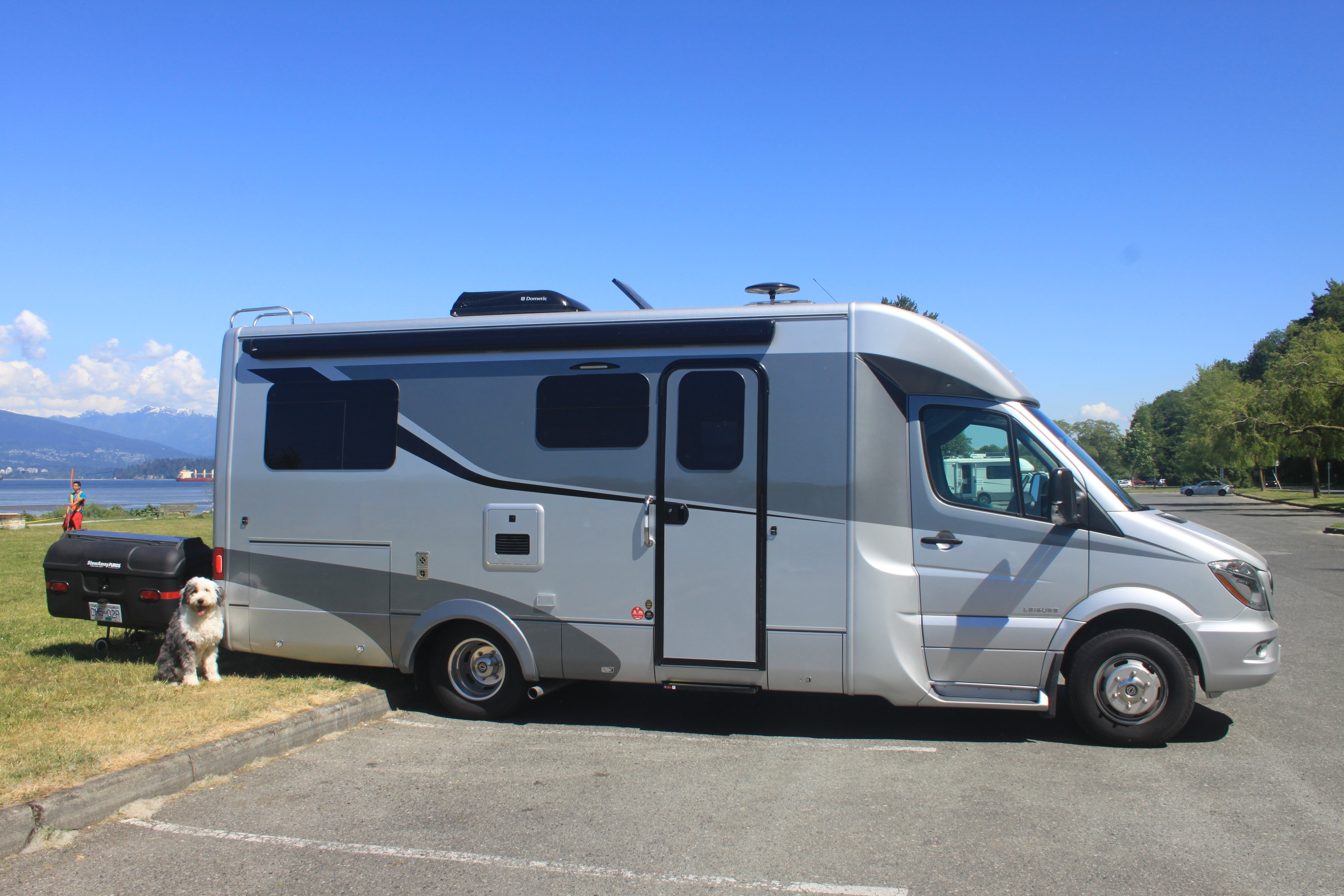 So there you have it. Unwittingly, the Bear’s pooper tooter was the cause of a sleepless and anxious night. After due consideration, we discovered that a well-positioned pillow under the fridge at night worked as a fix because we don’t foresee the Bear being denied future German-style sausage leftovers, she just wouldn’t have it.

Alan Budde is a retired Federal civil servant, who along with his wife and sheepdog, loves exploring North America in their wonderful Unity Leisure Van.