On the Road with Al and Ev – New Hampshire & Maine

We leave Littleton, pleased as always with the ambiance of this beautiful camp, Boston Minuteman Campground. Not only is it heavily wooded, it is situated so beautifully into its setting that you aren’t aware there are other RV’s parked nearby. The cooking areas, rather than being fire buckets used in most parks, are carefully built stone pits, into which the camper can put his/her cooker and be safe and secure. Thank you, Minuteman, for another lovely stay.

We pass Concord, home of the Massachusetts Penitentiary, which seems somehow more benign than the one in Sparke, Florida. Maybe it was the Colonial architecture, or maybe it’s my bias that all things Massachusetts are done well. Then we pass everything Walden, from Thoreau’s Pond to parks and streets, with no sign of Concord’s bloody history. Then we pass Hansen Field, a military installation, so we’re still worrying about war.

We’re excited to be going to see Rae and Jordan, she a friend from our high school days, and Jordy a friend of Allie’s at Penn. We’ve all been friends for over 70 years—so hard to imagine we are now this age.

We enter I95 which feels so familiar as we pass the towns bordering our towns where we grew up. A shoutout to Phyllis as we pass Weston, and a hello to Brandeis University. I’m sent back in memory to being dressed in a lovely Sari gown and Allie in a tux as we get ready to go to the Brandeis Ball. Brandeis was so young in those days that it didn’t have an alumni/ae, so Allie, his brother George and his father Paul became foster alumni to help the University grow. Back to the gown—my dear Mother-in-law brought me the Sari from India, and my dear Mother fashioned it into an evening gown. I felt so glamorous. Brandeis has thrived and we’re very proud of it.

We pass Route 9, the road to Brookline, our home for all of the years until we retired to Sarasota. We also went to school there as did our children, and then Al and I taught in the Brookline Schools. Traffic begins to pile up on Route 128, and we marvel at big city traffic once again, but soon we’re riding free and on our way to Canton where our friends live in Orchard Cove. 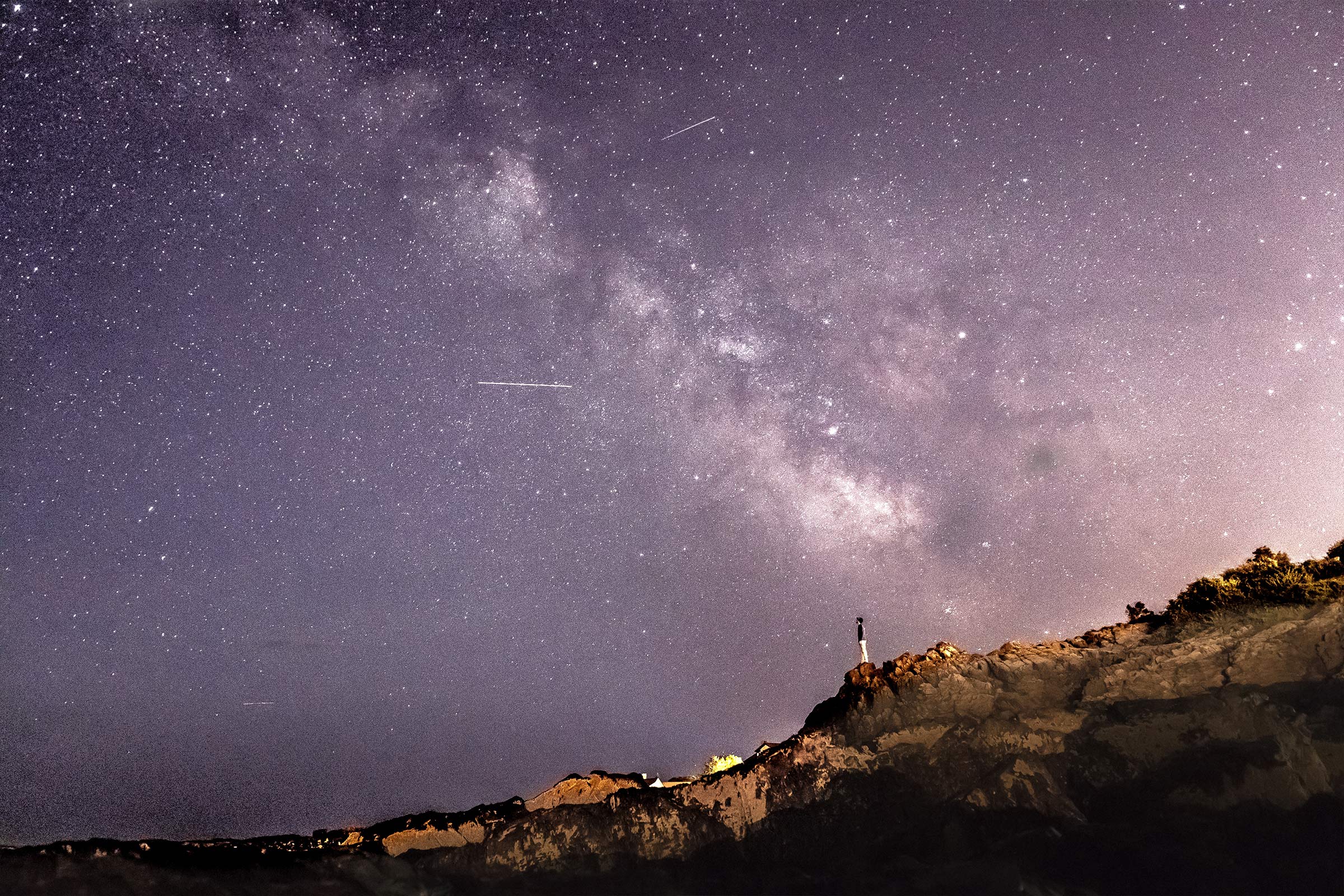 We had a wonderful visit and lunch with them, where Rae appears to be the Social Director. She knows everyone by name, has something nice to say about each person as she introduces me as her high school friend, and it’s easy to see she is really loved by them all. And why not? She is warm, loving, non-judgmental, caring, and fun.

The only jarring note in all the lovely ambiance surrounding our entry to the Cape was a sign at the entrance to the Sagamore Bridge: “Desperate? Don’t Jump. Call Us…”
I couldn’t picture a jumper anyway because they had built such high fences on the bridge. But evidently, there are people who still try. Life is not lovely for everyone.

But it’s lovely here at the Chateau Gabriella (my name), where Gaby has just served us a wonderful dinner of salmon, roasted veggies, cucumber salad, and strawberries and blueberries. We’re sleeping upstairs tonight, where we have lovely beds and a shower, so all is well at Gaby’s.

It’s Day Ten (actually it’s Eleven because I was too tired last night after unpacking, so just headed for bed, but here I am today, in five layers of clothing in this beautiful, brisk Maine air, and ready to blog.)

Wednesday:
11:30 a.m. Just leaving Centerville where we had a fabulous visit with Gaby and her son Roger.

Hadn’t seen Roger in years, and he has turned into a brilliant man, a fascinating raconteur, and a charmer. We sat hours over the breakfast table listening to his stories of Louisiana, his wife Anne’s home, and Boston, his home and ours. He’s knowledgeable about all the sociological changes, the architectural changes, and being in the real estate business, everything pertinent to housing and gentrification—its positive and negative effects on communities. His scope and breadth of knowledge were breath-taking and we could have listened forever.

But, having been trained by a master mediator (when I took the course at UMA Boston), you watch the feet. When they start to twitch, you know that person is ready to get up and leave. Allie was heroic in trying to stay put but is like the horse who is on his way to the barn for dinner, he was ready to go camping. We had intended to stay overnight the second night, but I know a lost cause when I see one and suggested to him that perhaps it was time to go. He flew to the luggage, packed the van, thanked Gaby and Roger profusely, and gave me a huge smile. Thank you, dear friends, for a wonderful and memorable visit. Gaby, you’re still a great hostess and cook! 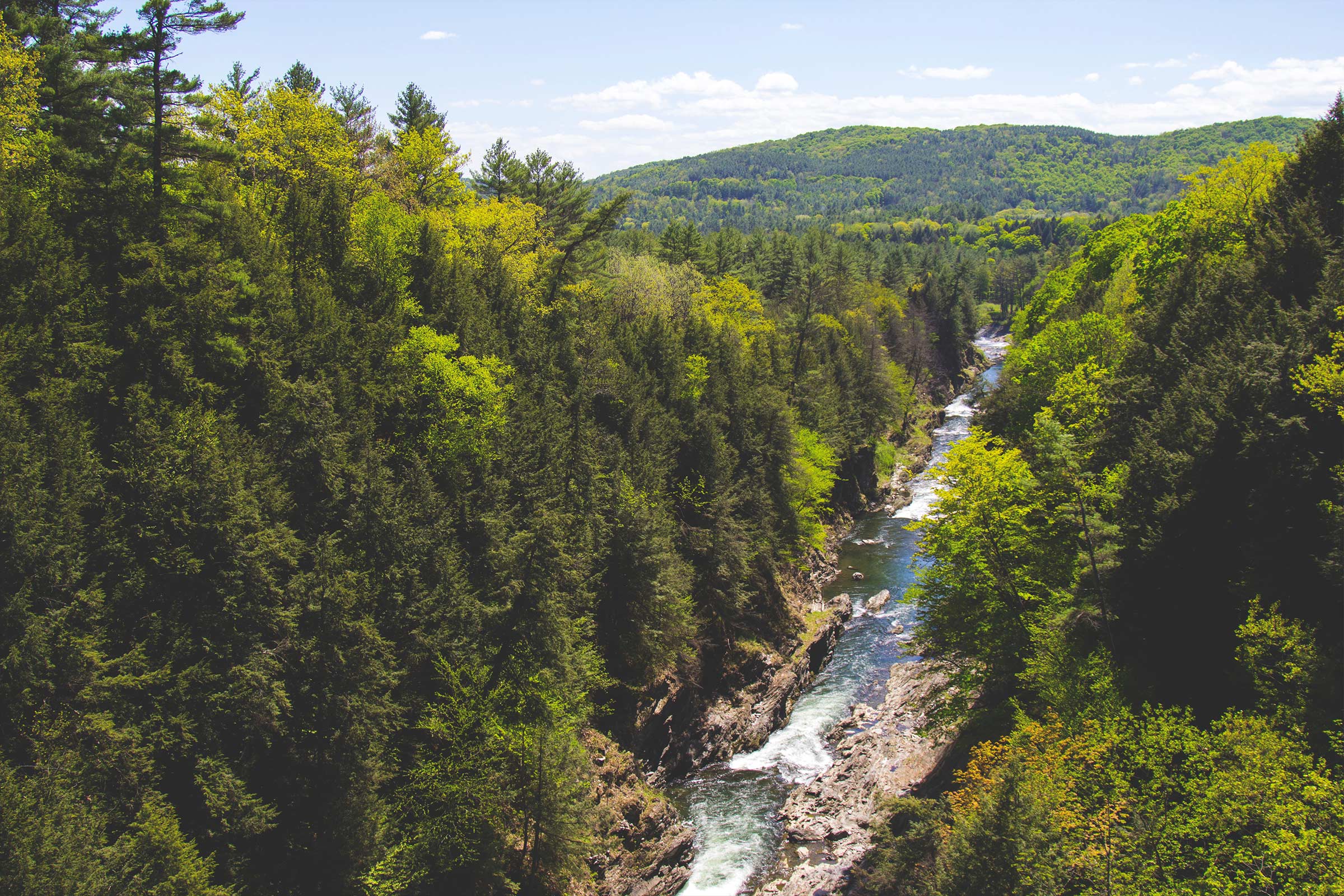 Now en route to Camp where Bill says the temperature in Winslow, Maine, goes down into the forties at night and takes a while to warm up during the day. But he has had his crew scrubbing the A-Frame, and de-critters it, having discovered nests upon nests where the little ones, knowing a good thing when they saw it, came in from the cold and nested in our house for the winter. Sorry, guys, but we’re back and it’s time for you to go outside and play.

I’m wrapped up in Martha’s electric blanket, which plugs into the car and keeps me toasty, plus Sue’s shawl from Paris, which goes wherever I go. We should be at camp in about four hours and like Allie, I now can’t wait.

We see wind generators in the fields and solar-paneled signs on the road, both of which make me very happy. I think our East Coasters are beginning to catch up with the Middle West and West, where wind farms are everywhere, as is solar.

I have time to think about our days in Centerville, where we spent three summers on the Lake where Gaby lives. They were happy times when the children were small, and Ira, Gaby’s first husband, was alive. We lost him much too young. But back to the Cape—Ira’s favorite activity at night was to pile us all into the car—his three kids and our two, plus all of us, and head for the local ice cream parlors. They were both good, but the plan for the night was to sample each again, ordering double scoops of our favorite flavor at each place, and then comparing to see which was better. They were both great. Imagine eating four scoops of ice cream and being happy.

It finally happened. Allie parted company with Sally Mae, as she insisted upon a devious route to Maine, while he was happily scooting along 495N en route to 95N, a direct and familiar route. Being on a road so familiar to us after these many years, Sally was a non-essential, and goodbye, dear, you’ve been a good friend.

We have been playing the license plate game together, our goal is to spot all 50 states, but I fear we won’t make it, as the states we are missing are all mid-West and Western, and we don’t see too many of those on the Maine Turnpike. We have 39 states at the moment and I think that’s going to be it. I’d list them for you, but it would be boring. I am willing to be anything but boring, having been trained to resist such a thing by my eighth graders, who were never reluctant to tell me if something was boring. So no list, but you can guess, since the only Western states we have are California, Washington, Utah, New Mexico, Arizona, and Oregon.

We’re looking for a good place to stop and feed the RV and us. We finally find a Cracker Barrel and a Gulf with diesel and pull over. The third necessity is a parking space for our 24-footer, which takes up three regular parking spaces, and can’t block other cars. This was it! We parked, we filled the tank, and we filled ourselves with a tasty lunch. Allie had French Toast with real syrup, and I had what they called “Eggs in a Basket” and we call “Bull’s Eyes”. They were cooked just right and delicious, with hot tea, really hot, while Allie guzzled real lemonade, ice cold. By the way, we noted on the odometer that our trip to the Cape was a 250-mile detour, and it was worth every mile.

And it’s a very short visit, as Maine is upon us in a very short time. But there is time to greet Portsmouth, NH and Kittery ME as we cross the state line. Ah, Kittery, the vacation spot for my dear friend Ellie, her loving Mother Maebelle, and me. We were teenagers and Mae was driving us North on the Newbury Turnpike to a weekend in Kittery at Mr. Adams’ cabins. I worked weeks to gather the $5.00 it would cost for the weekend: A dollar a night times two for the cabin; one dollar for cosmetics (Maybelline) at the 5 and 10; two dollars for a lobster dinner at the Lobster Shack in Portsmouth. Mae, bless her, picked up the rest, including her picnics, gas, and two pounds of Fannie Farmer’s candy. This sat on the open door of the glove compartment, where Ellie and I had easy access to the top layer on the way up and the bottom layer on the way back. We finished the two pounds on the trip. We won’t talk about the pounds on our hips, which in those days were pretty robust. 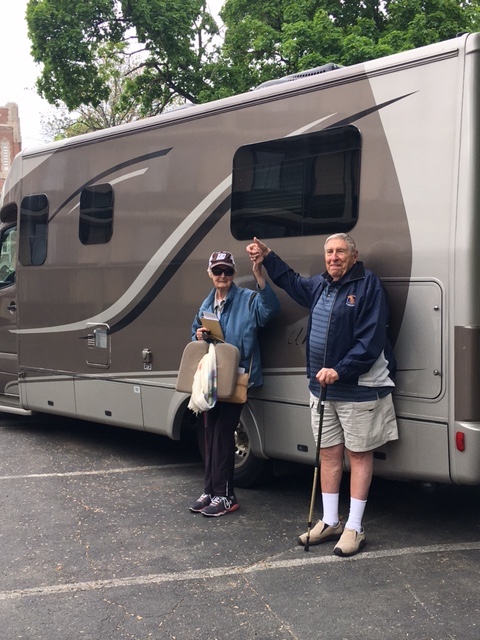 We pass Freeport, which used to have only an old, rickety L.L Beane, and now is home to dozens of shops, discount stores, boutiques, ice cream parlors, restaurants, lobster shacks, and motels. If you’re a real shopper you could spend a whole, happy day there, ending with a double scoop.

A shoutout to Carol C., Sue’s friend, in Freeport Harbor. We see signs at exits which would take us to Route 1, the coastal route, a beautiful road for vacationers, travelers, and sight-seers, but not for anyone headed home.

Augusta is on the horizon and from there it’s a hop, skip and a jump to camp, just 27 miles away. Our trip comes to an end, all 3,000 miles of it, and we marvel that it is our 50th trip down the camp road as we arrive each summer. Well, fifty or not fifty, depending on how you count. We bought the camp in 1968, and were co-Directors the first summer, but didn’t really own the camp until August. So perhaps we’ll just celebrate two years in a row. We pass the hundreds of towering pines at the entrance, trees which were just tall enough for us to reach the tops our first summer when we enlisted the kids as we attacked the “evil weevil” which was nipping the buds at the tops. We must have done a good job, for the trees are tall and healthy.

And here’s the A-Frame, warm and cozy, to welcome us to Camp. Thanks, Bill and crew, Lori, Alex, and Jerry, for all your work, for helping us unload, and forgetting the cabin so clean and vermin-proof, to say nothing of warm. We feel very welcomed.

Sayonara, dear ones.
Be well and happy.