Savannah on My Mind

If you’ve ever shied away from visiting a large city because you want to avoid navigating, parking and driving within, shy no longer. A resort-like campground with a convenient shuttle service to Savannah, Georgia’s fifth largest city, just opened and is ready to serve a 5-star resort-quality stay.

So, first I’ll take you to the campground, and then move in and on to the city once gifted to a president, and where Forest Gump sat on a bench waiting for that bus with his box of chocolates.

CreekFire Motor Ranch, a 105-acre facility, boasts roomy full-hookup sites, a clubhouse, pool pavilion, a 35-acre lake and more. You can choose from 103 level, back-in, pull-through, gravel and paved pad sites. Just opened in October 2017, this multi-million dollar facility is so new that we could still see the newly-laid turf patterns in the grass. An Airstream trailer serves as a food truck, currently open for events, weekends and holidays.  Their shuttle service, at $10, takes you to the Savannah, a service to be appreciated as the Savannah Visitor Center recently changed its policy and no longer allows RVs to park in their lot past 6:30 p.m., or overnight. Bill is pretty comfortable driving our 2015.5 Leisure Unity MB in crowded cities, but this shuttle service lessened our work. 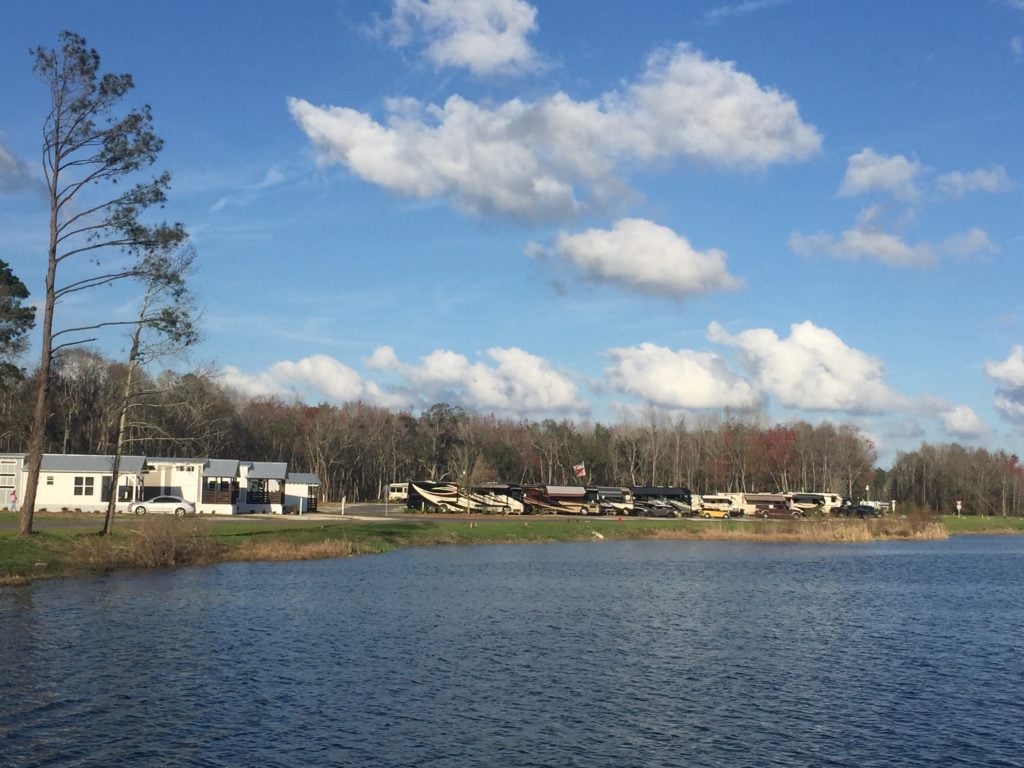 Cabins and RV spots by the lake at CreekFire Motor Ranch.

“This campground was designed with the guest experience in mind – and we can’t wait for visitors to create lasting memories here,” said Matthew Lipman, owner, and president. “CreekFire’s location is one of the elements that make it so special,” added Lipman. “Guests have easy access to Savannah, but at the same time, our amenities make the campground a destination in itself.”

Relax at the pool and hot tub.

Little ones can play in the kiddie pool.

And, there is more yet to come at CreekFire. A grill and bar for the pool area and will be open for Memorial Day weekend. Under development is a Lake House to open summer 2018.  Phase II will start construction next year and will include a driving range and golf putting area as well as a lazy river around the pool house.

Now, about Savannah. The oldest city in Georgia, founded in 1733 on the Savannah River, it’s the place where low country boils (I’ll explain later), hand-made pralines (depending on your region, pronounced prawlines or praylines), and southern hospitality are served with a smile, and just a hint of a drawl. It’s the place known for its ghost tours and hauntings. Some say it’s one of the top 10 haunted cities in America, and it is certainly up for boasting rights for #1. And, it’s the place with museums, period architecture, those picturesque city squares seemingly on every block, art galleries and more. The city’s downtown area, including the Savannah Historic District and Savannah Victorian Historic District, is one of the largest National Historic Landmark districts in the country.

Foodies will want to sample handmade pralines made with pecans, butter and sugar and other ingredients found at several candy stores. And, even if you’re not a sweets lover, you’ve gotta try’em. Savannah’s diverse cuisine includes locally sourced seafood, fried chicken, barbeque, grits and more. But if you’re coming here for food, make sure ‘sea’ is the prefix, as you’re on the Atlantic, and close also to the Gulf.

Watch pralines being made.

Pralines and other goodies at the candy store.

Let’s pause for a bit of history here. In 1864, Union General William Tecumseh Sherman “gave” Savannah as a Christmas present to President Abraham Lincoln, rather than burn it all down. It thus remains as one of the few cities in the South that escaped the Civil War’s carnage. You can research several stories on how the city was saved, and decide which story sounds most plausible. There are several. It’s also a place where slaves were sold, and sadly, in 1859, was the site of the largest auction of slaves ever, known as “The Weeping Time.”

On to our visit. We arrived at CreekFire Motor Ranch on a Thursday afternoon, settled in and grabbed the 6 p.m. shuttle to the city. Dropped off at City Market, from there we strolled toward River Street, stepping down one of several historic flights of steep stone steps, remnants of the 1800s, onto the old cobblestone streets. You can practically breathe in the history here as you imagine a time when horse-drawn carriages, riverboats, and smoke-belching steam trains were the modes of transport. 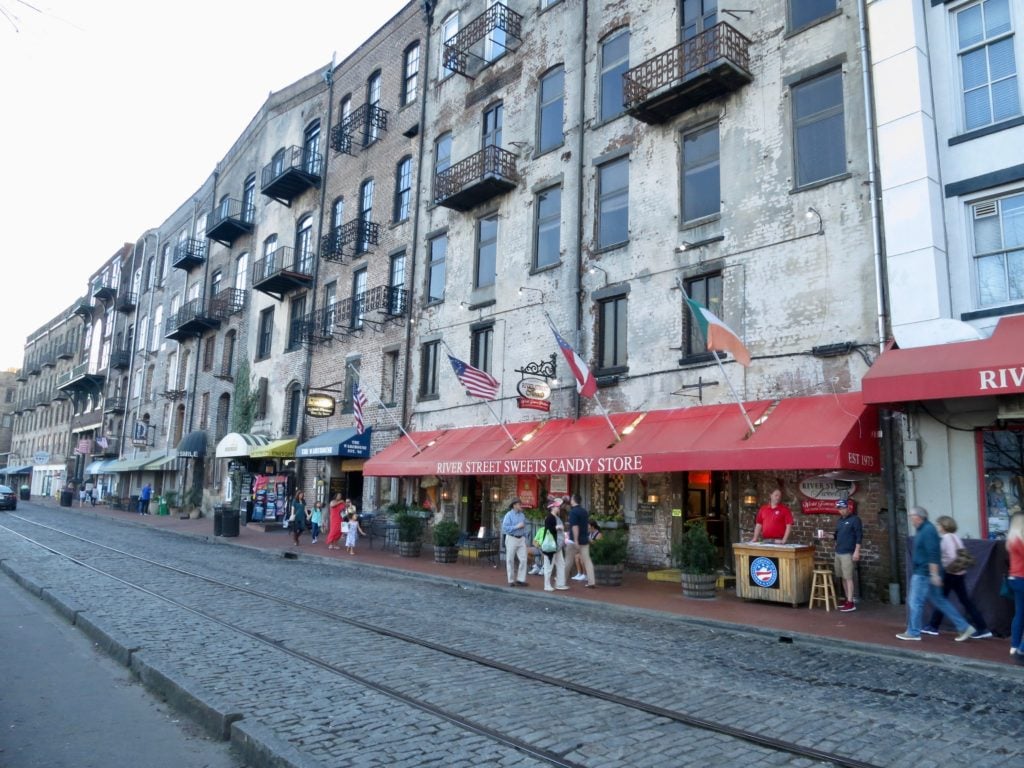 The refurbished warehouses, once home to King Cotton, nowadays are filled with hotels, shops and spots for dinner. Fiddler’s Crab House, set in a historic 1850’s cotton warehouse, was our choice. We dove into a Low Country Boil for two, with oysters raw and steamed, littleneck clams, crawfish, shrimp, and crab legs, plus our pick of sides, including cheesy grits, Caesar salad and redskins, for about $26 each. 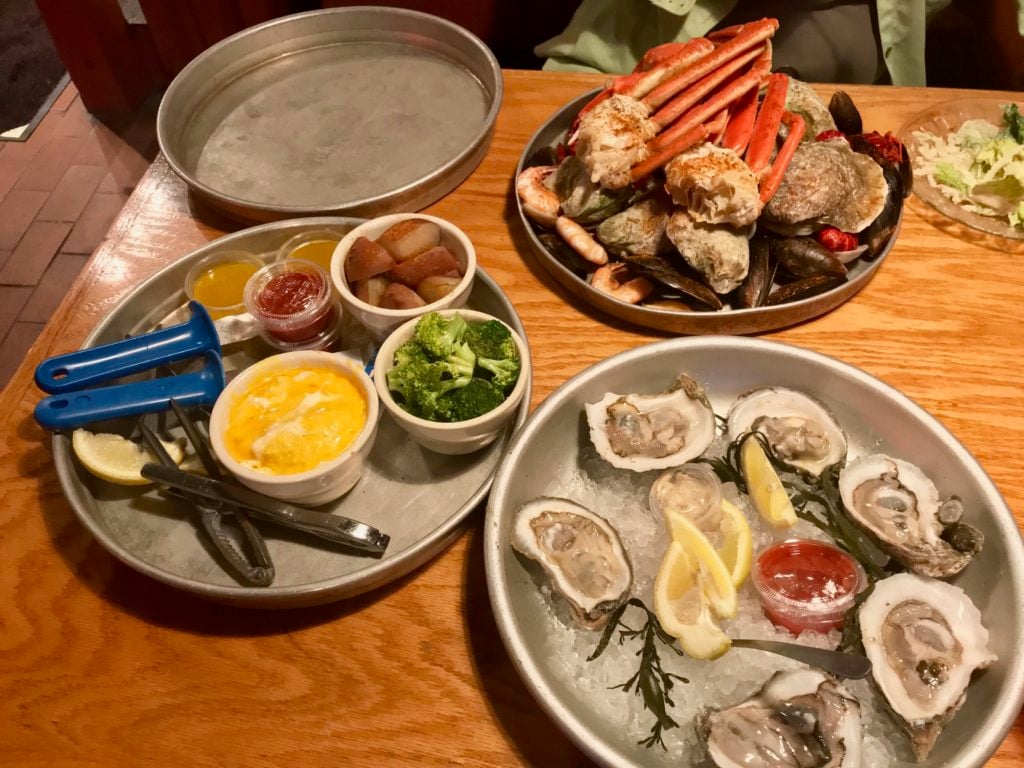 After dinner we walked along River Street, tasting a sample of fresh-made pralines at Savannah’s Candy Kitchen, buying one chocolate and one regular of these pecan delights to savor later in our trip. We then sauntered back to City Market, with just enough time to share a dish of ice cream and listen to live music from the Tree House Savannah restaurant. The shuttle picked us up as scheduled at 9 p.m. and brought us back to CreekFire.

The next morning we took the 9 a.m. shuttle back to the city. After walking through City Market again, we wandered toward Forsyth Park, a little more than a one-mile walk, admiring the turrets, towers and decorative trim of the historic homes and churches, and tree-lined E. Oglethorpe Avenue, one of the city’s most famous sights, that trademark live oak-canopied street the city is known for. We stopped at several city squares, including Chippewa, where Tom Hanks, aka Forrest Gump, sat on a bench in that movie (the bench was placed there only for the movie and is now in the Savannah History Museum).

Telfair Academy of Arts and Sciences

Another 10 blocks and three city squares down, we arrived at Forsyth Park, with its live oak-lined walkway beckoning us to Forsyth Fountain, modeled after a few other fountains found around the world, including fountains in Paris and Peru. 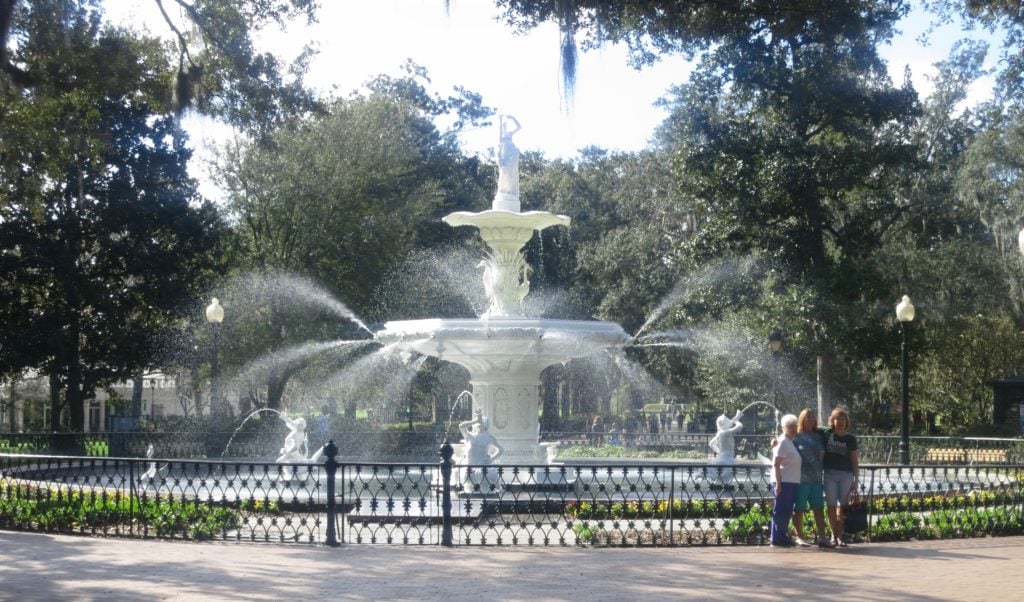 In the park, we watched a “plein air” artist painting the way Monet would have, and young mothers exercising together. Tourists posed for photos at the fountain, named for Georgia’s Governor John Forsyth, who led the state during the city’s expansion in 1851.

Continuing our walk back to Market Street, we stopped to ask about lunch at Belford’s because of its inviting outdoor patio. With accolades from Bon Appétit, Southern Living and The New York Times, this is one of THE places to eat in the city. Sitting outside to watch the passersby, we each chose a Low-Country tradition, She-Crab soup, and shared an order of fried green tomatoes and baby kale salad with bourbon-soaked peaches. We missed the crab cakes, which were described by all we met as “the best in the world.” Next time.

Contact CreekFire Motor Ranch at www.creekfirerv.com, [email protected], or 912-897-2855 to make your reservation. If you are a Leisure Travel Van owner, mention this blog when booking and use promo code VANS20 to be eligible for a 20% discount within the month of April 2018. Rally groups can also be accommodated. CreekFire Motor Ranch, 275 Fort Argyle Road, Savannah, GA is just one-quarter mile west of I-95 exit 94. Discounts are given for Good Sam Club, Family Motor Coach, and military veterans. One discount per visit.

Get acquainted with Savannah by taking a Hop-on, hop-off trolley tour or a horse-drawn carriage ride. There are several trolley lines, and our favorite is Old Town Trolley Tours, where people in character come aboard to give you a bit of first-person fun, or history. If you’re lucky, Forrest Gump and other characters might join you on the tour.

After visiting Savannah, consider head south along the coast, to St. Augustine, Florida, the oldest city in the nation. But, someday, you must visit Savannah.