After Florence dawdled along the East Coast of North and South Carolina, leaving devastation and floods in her wake; followed almost immediately by Hurricane Michael with winds and even more rain and river flooding, a hearty band of Carolina LTV Enthusiasts headed west to the promised land of Tanglewood Park. Even as Category 5 Willa took aim for south-west Mexico and a direct course to Tanglewood, where many LTVers sought solace in the falling acorns.

Sixteen rigs and thirty souls arrived Wednesday evening, greeting familiar road warriors and providing warm welcomes to newbies alike. Although it was a bit chilly, the group assembled under the pavilion to discuss the planned events of Thursday and Friday, arranged by Russ and Diane Barberio and Jerry and Debbie Stephens. Russ and Diane have upgraded to a “big bus” for their business; Jerry and Debbie had a medical emergency, so Mary Kay Kraft and Jan Dumont volunteered to be sub-sub-sub hosts for the weekend. An orientation followed an extraordinary ad hoc contribution of munchies. LTVers sure do know how to cook up some varied and tasty treats! Many offered testimonials of Leisure Travel Vans and the support they provide to their rig owners, including support for each regional LTV club.

The next morning, after Mary Kay and John Sawyer, procured two 12-passenger vans, with huge gratitude to Gary Grisset who shuttled us to the car rental, the group departed promptly at 9:00 am for a grand tour of Old Salem. We arrived just ahead of the school tour and were able to hear the 200-year-old organ in the visitors center before shuffling off in single file, holding the hands of our buddies, following the students to tour the remainder of Old Salem. (OK, LTVers were not in single file; neither were the students.) We, adults, headed directly for the Winkler Bakery, with the promise of freshly baked raisin bread and apple strudel.

Then on to God’s Acre, a Moravian cemetery, where church members are buried in accordance with their relationship to the church rather than to their families. Groupings of flat white stones, reminiscent of Arlington Cemetery, efficiently segregated into “choirs” by gender, marital status and date of death.

We then travelled up the road a piece to Winston-Salem, North Trade and Sixth, where Mast General Store and Sweet Potatoes restaurant satisfied the hungry beasts within.

Mrs. Hanes Moravian Cookie Bakery lured half the group along. They hire “good country stock” to roll, cut and bake a lot of cookies. With nine-hour days and six-day work-weeks, we all realized we possibly were not “good country stock” enough! We were certainly able to procure enough, however, to put a dent in their day’s production! 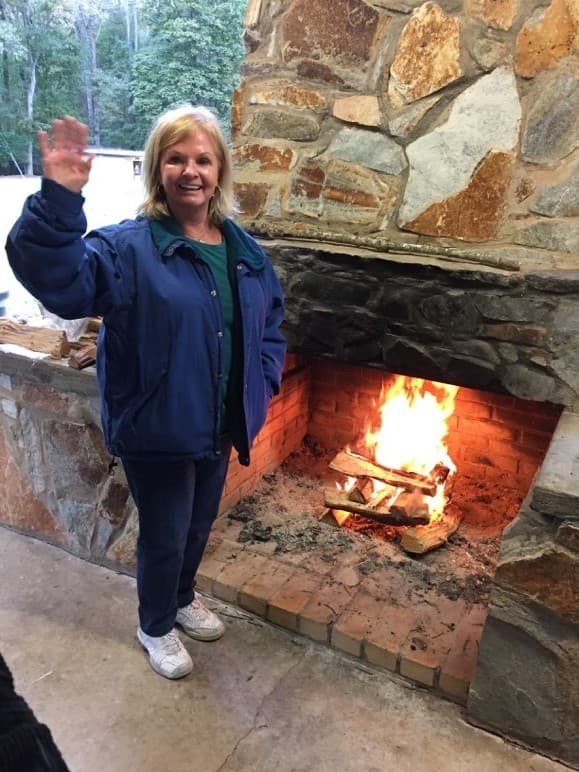 Returning to camp, we had just enough time to pack away our procurements and head to the pavilion, where we watched and benefitted from the fire building skills of Carol Burns! Shortly thereafter, Little Richard’s Bar-B-Q, graciously provided by Howard RV of Wilmington, NC, put out a spread that was outstanding! Pulled pork BBQ, Chicken BBQ, coleslaw, macaroni and cheese, rolls and banana pudding had us wondering why we ate so much at lunch! A hearty toast to Howard RV was offered. We are eternally grateful to Howard RV for enabling many of us to be road warriors and for their continued professional and personal support of our LTV family. 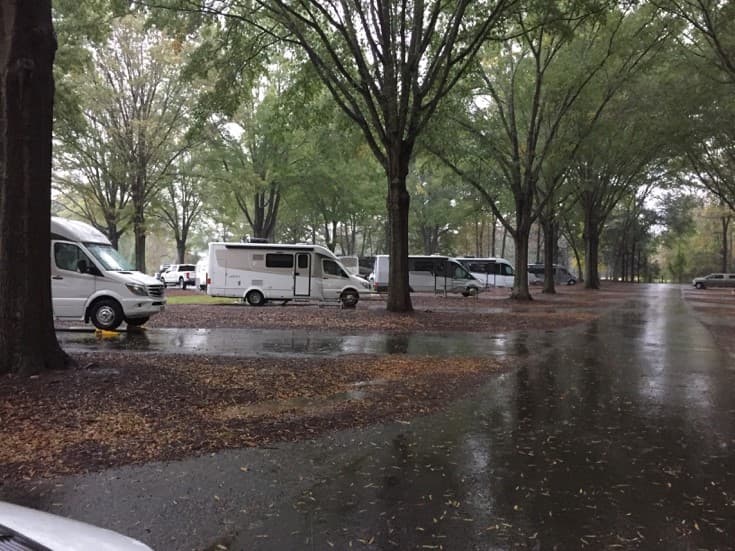 Friday, the rain began early and continued through the day. Through excellent planning, this was our inside day! One van visited Reynolda House and Village. Four docents awaited our arrival. We were treated to a truly delightful interpretive discussion of the photography of Dorothea Lange (black and white depression and dust bowl) as well as the extraordinary home of R. J. and Katherine Reynolds (tobacco). The visit was well worth our time and many intend to return again. The gardens and walking paths were dormant but should be on any agenda come springtime. The second van chose to visit the NASCAR museum and a winery instead, where they ran into Richard Childress (of the Dale Earnhart race team) who signed wine bottles.

The balance of the weekend was spent sharing and sightseeing. Interesting tips shared:

Wet and chilly weather failed to dampen another enjoyable outing with the Carolina LTVers. 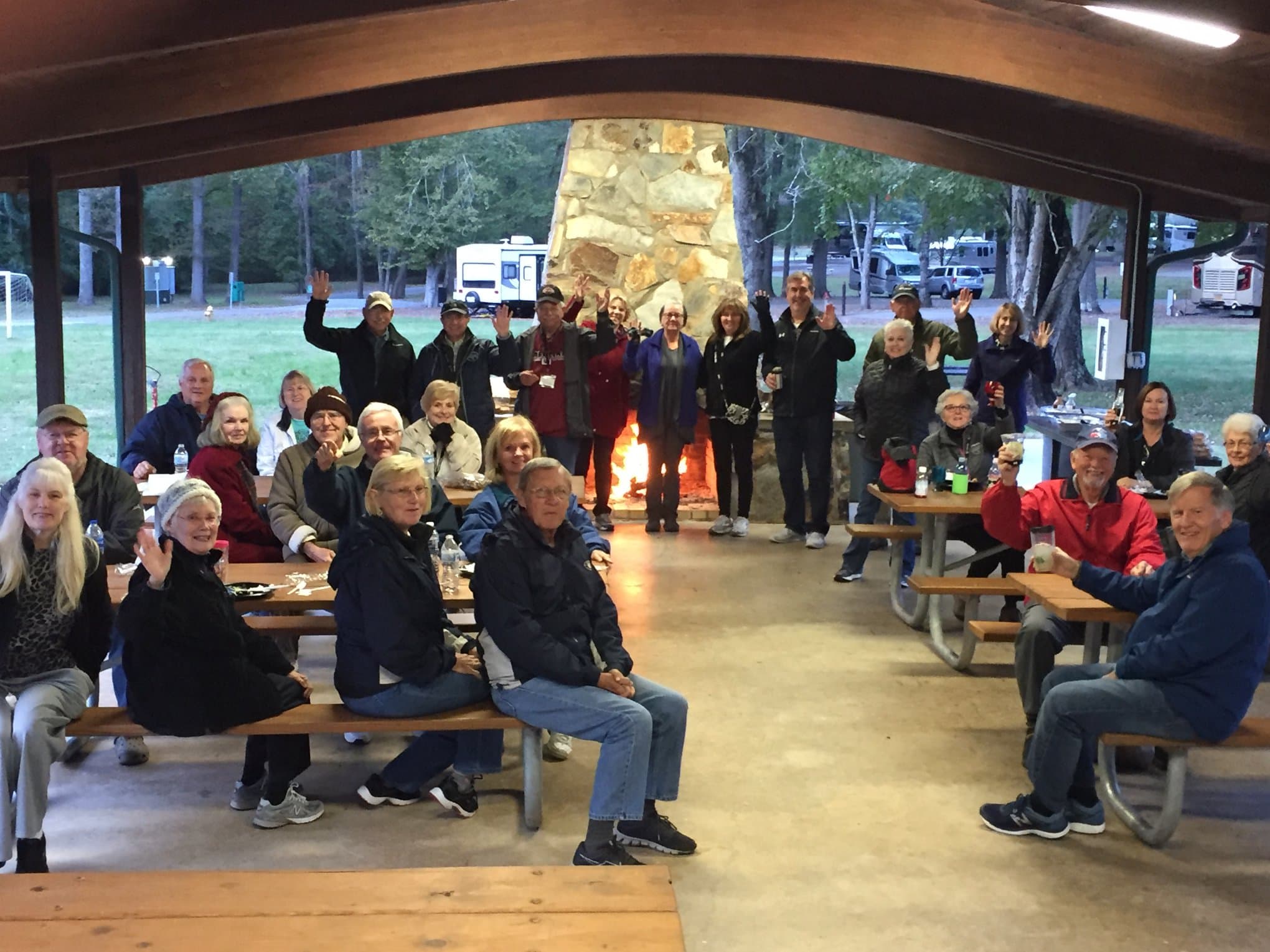