In 1890 somewhere in the Great Canadian Rocky Mountain range of Banff (Alberta) where Mount Whitlock and Mount Nibley tower majestically over Lake Agnes,  Mr J.W. Astley noticed two rather odd shaped mountains. Thinking they looked a little like giant Beehives, he named them, rather appropriately but perhaps a little uncreatively: The Big Beehive and The Little Beehive.  We were unaware of either their existence or their names as we stood on the well manicured grounds of the Fairmont’s Chateau Lake Louise that morning.  Sometimes it’s better not to know what mountains might appear in your path, right?

We’d been watching the weather and knew that today was forecasted to be rain free and beautiful. As we parked our MoHo in the RV parking area, we looked up at the skies. It was still too early to tell but we promised ourselves to remain vigilant; one never knows how the winds will blow round these mountain bends. 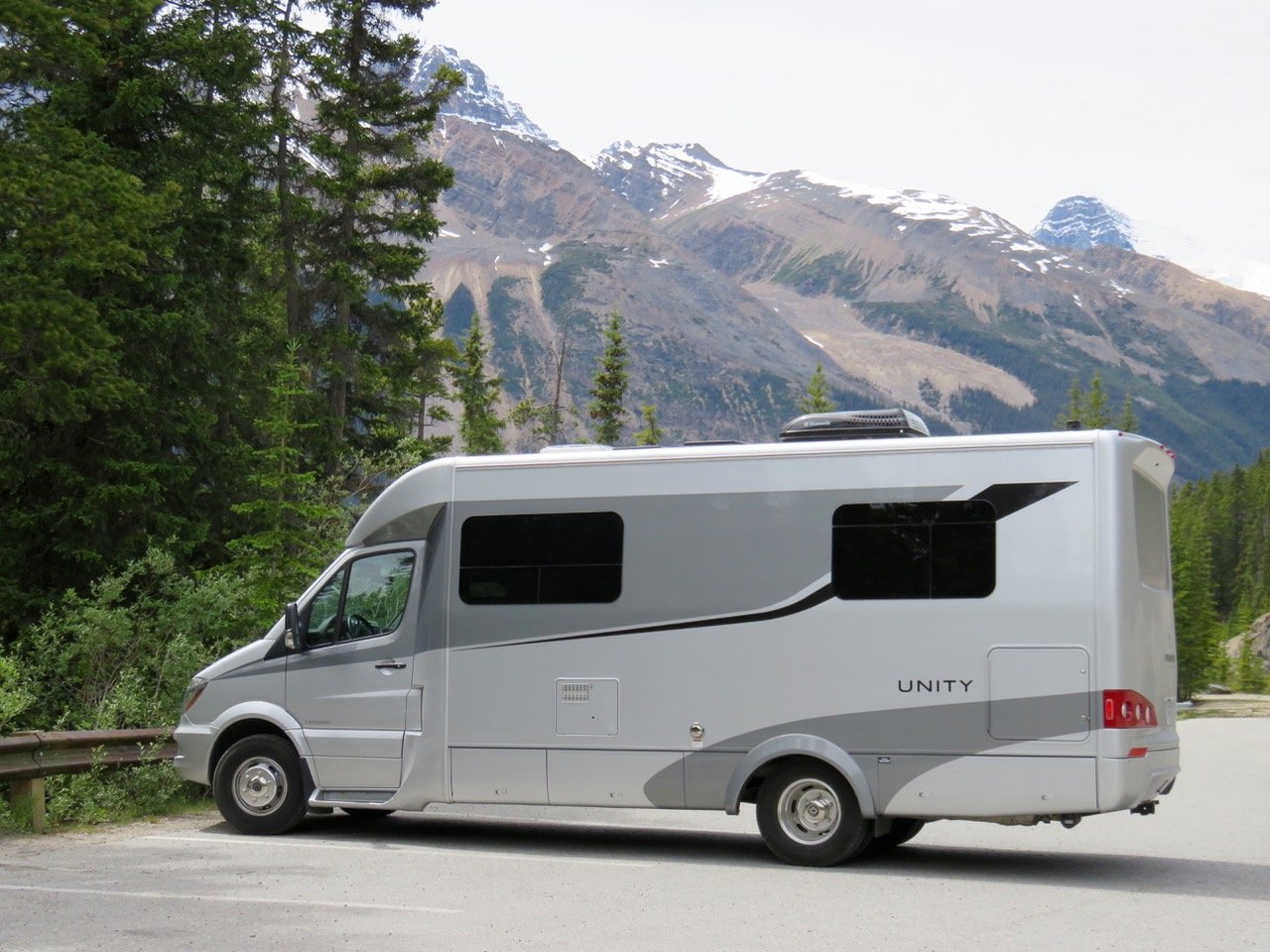 Once upon a time the Chateau grounds were just a wild outpost at the end of the Canadian Pacific Railway. Today the Fairmont’s Chateau Lake Louise reflects a luxurious profile over the waters, the area around the hotel is part of Banff National Park, a World Heritage Site. The informative billboard by the Lake depicted many trails emanating from the ubiquitous YouAreHere circle.  From a 2 km circumnavigation of Lake Louise to multi-day backcountry excursions. We were hemming and hawing when the couple next to us interrupted our reading,

“Hike to the Lake Agnes Tea House” they suggested. “It’s fantastic. We did it a few days ago, and it had us buzzed!”

“Tea House? Up here in the mountains” I asked a little curiously, and perhaps rather incredulously.

With the promise of sweet somethings as an end reward, it was easy to talk ourselves into the described 7.2 km’s (or 4-5 hours) return. We’d dressed in layers, had plenty of water in our backpacks, and had even thought to bring our hiking poles. We were ready for anything, but not without first stopping to note the clear blue skies, and admire the view. 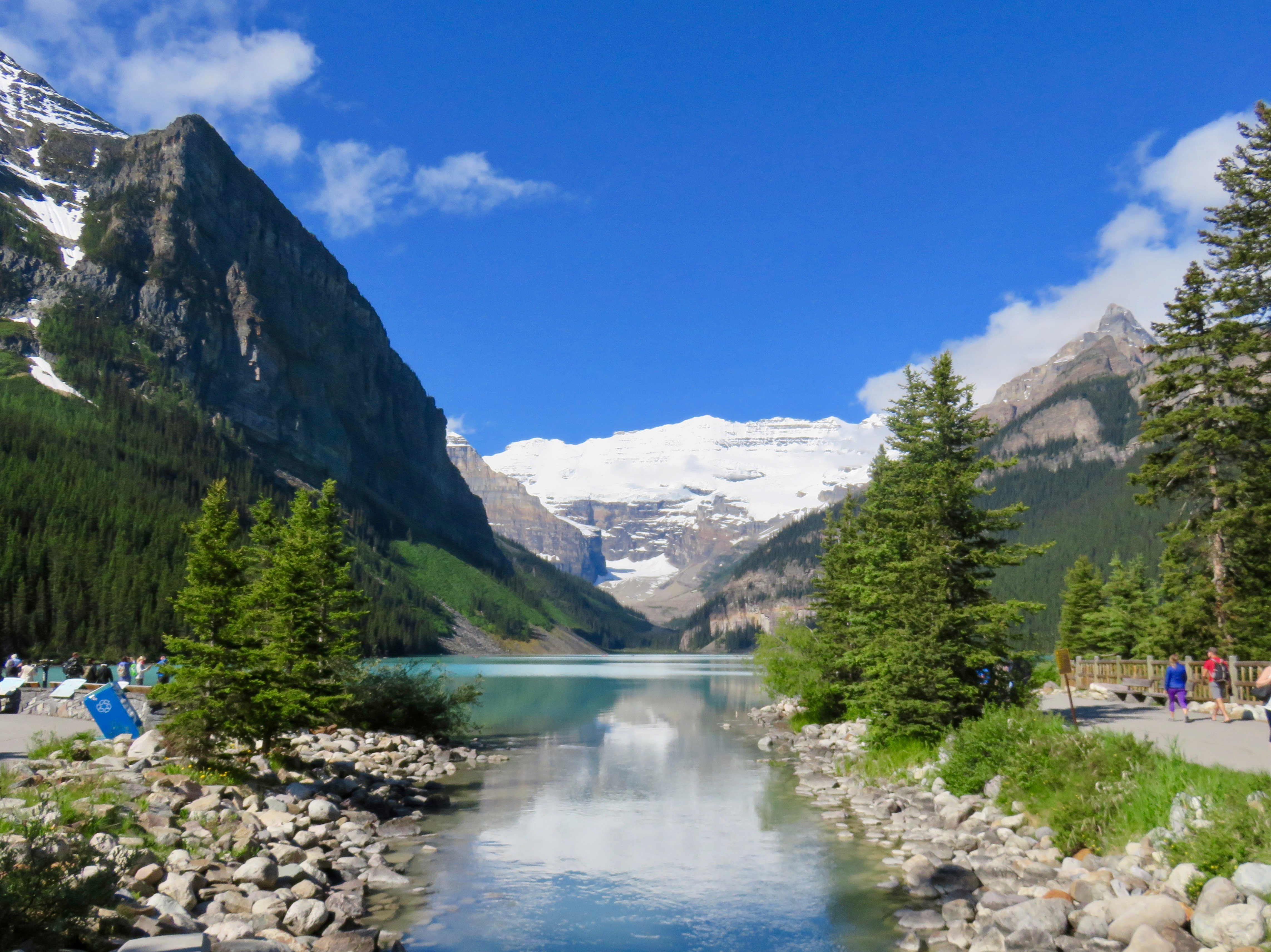 The sign for Lake Agnes pointed that-a-way and we eagerly veered, that-a-way.  The wide path sloped slightly uphill, just enough for us to note the change in grade, 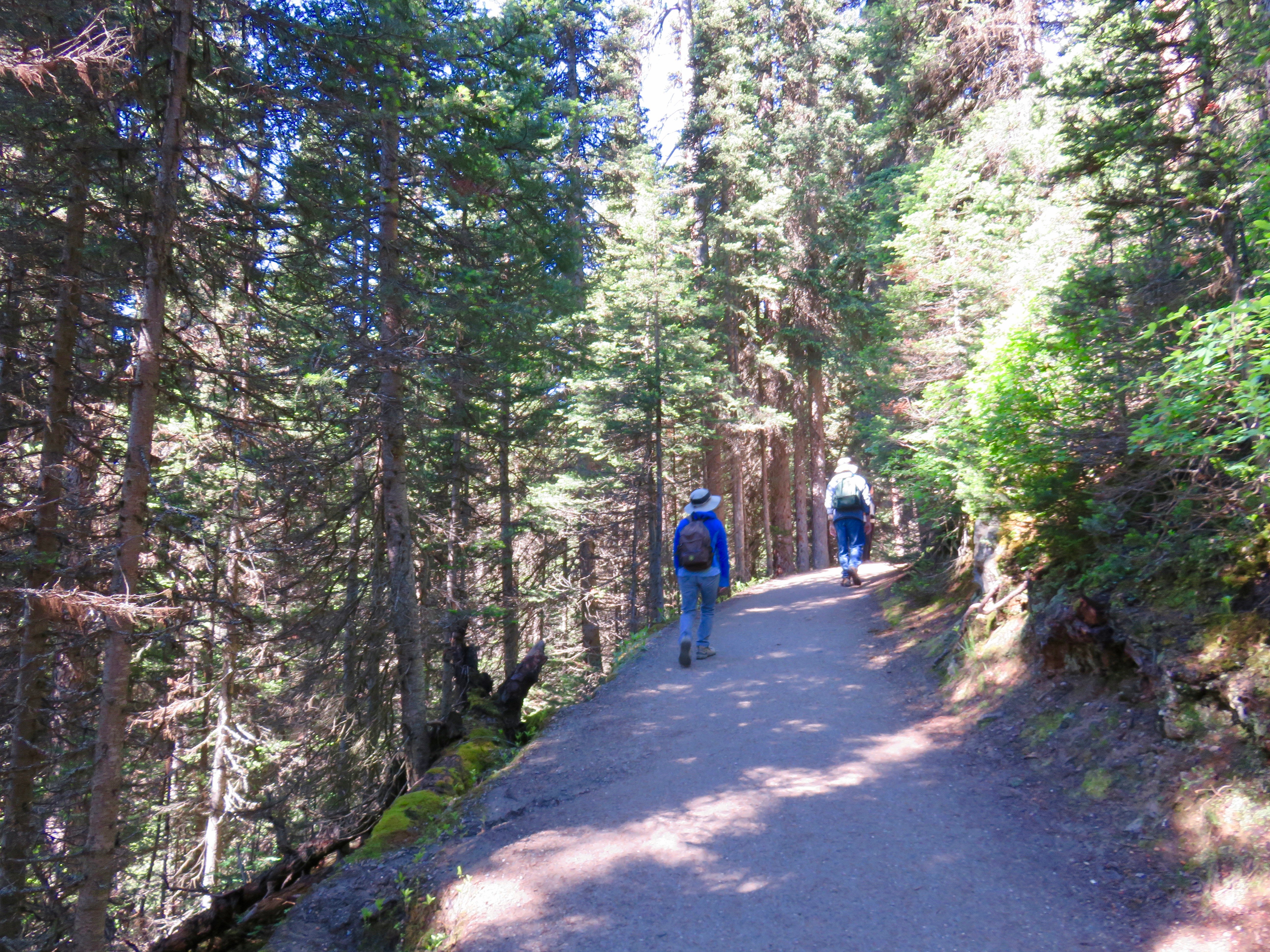 but otherwise easy to walk, and we were pleased we’d left early in the morning. We breathed in the cool piney smell of forest, stopping often simply in awe of our surroundings, 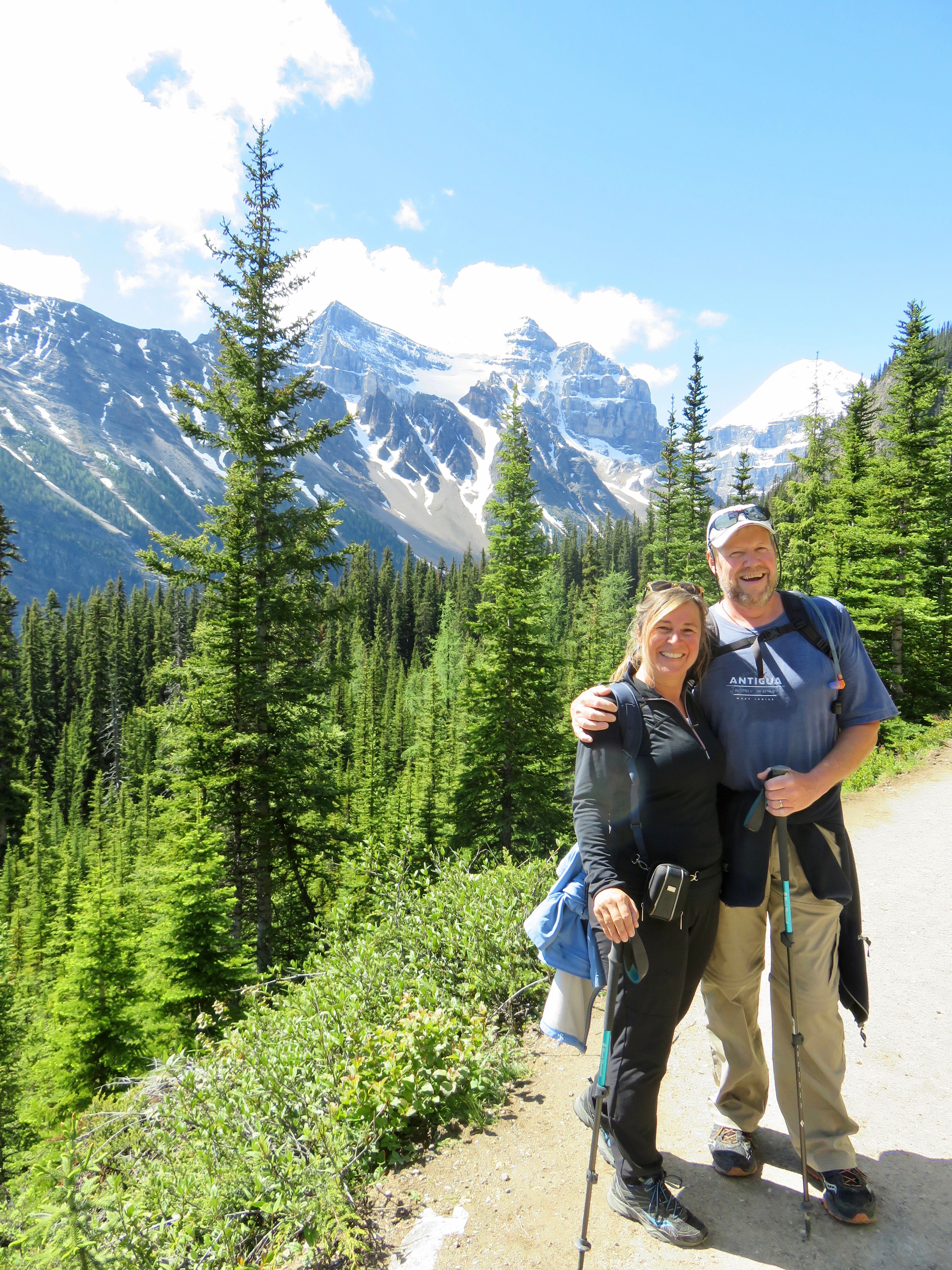 But mostly to catch our breath.

“I can’t believe I’m this out of shape” I gasped!

“I think it’s because of the higher altitude,” Dave replied. “We’re well over 5700 feet high here, and still heading up”.

We had to stop to get a few photos of this unusual rock formation behind us. Perhaps you can even hear the foreshadowing type of music that was buzzing all around us. 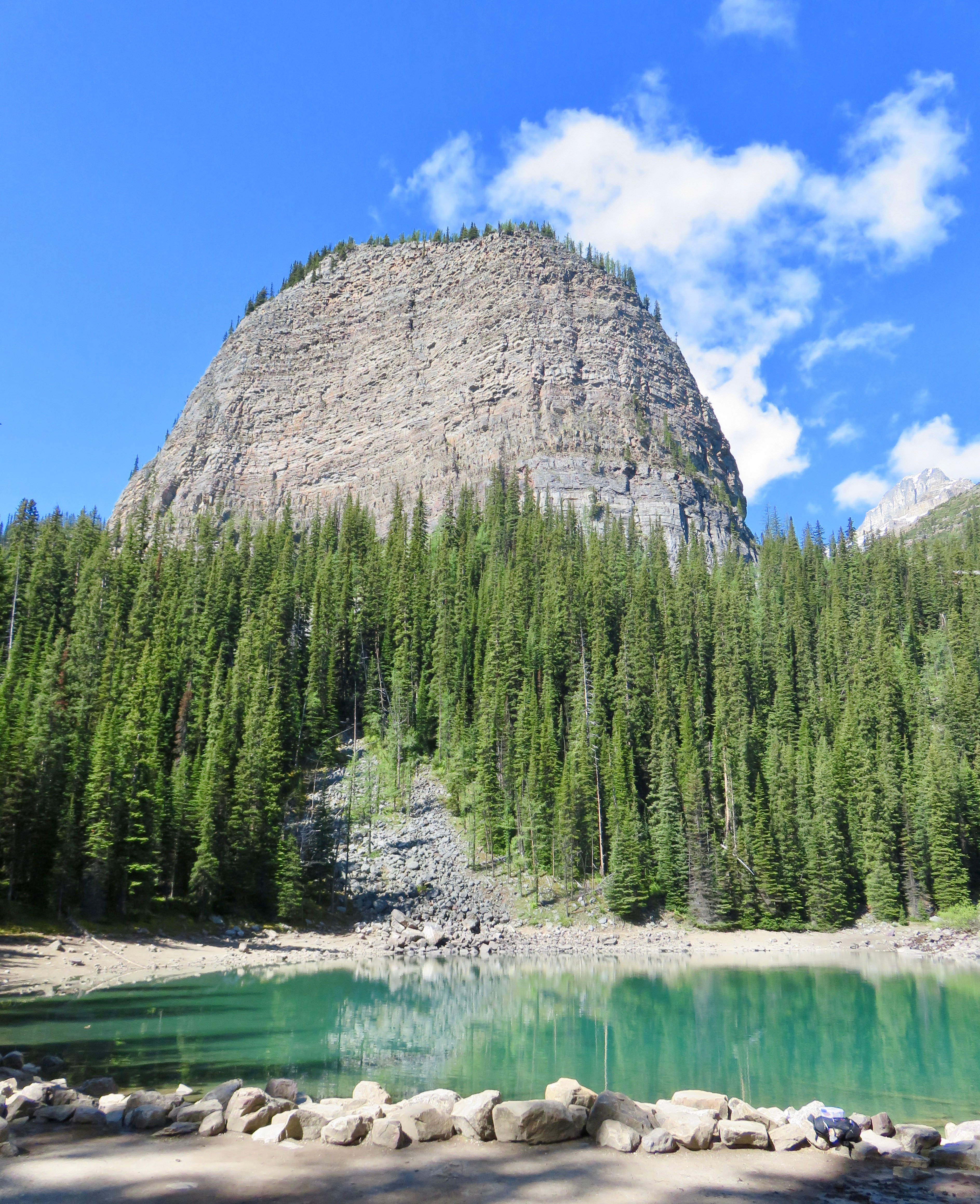 The path got a little narrower, and a whole lot steeper.  The buzz here was that you could go the long way around using the switch-back route, or take the shortcut up the wooden stairs. 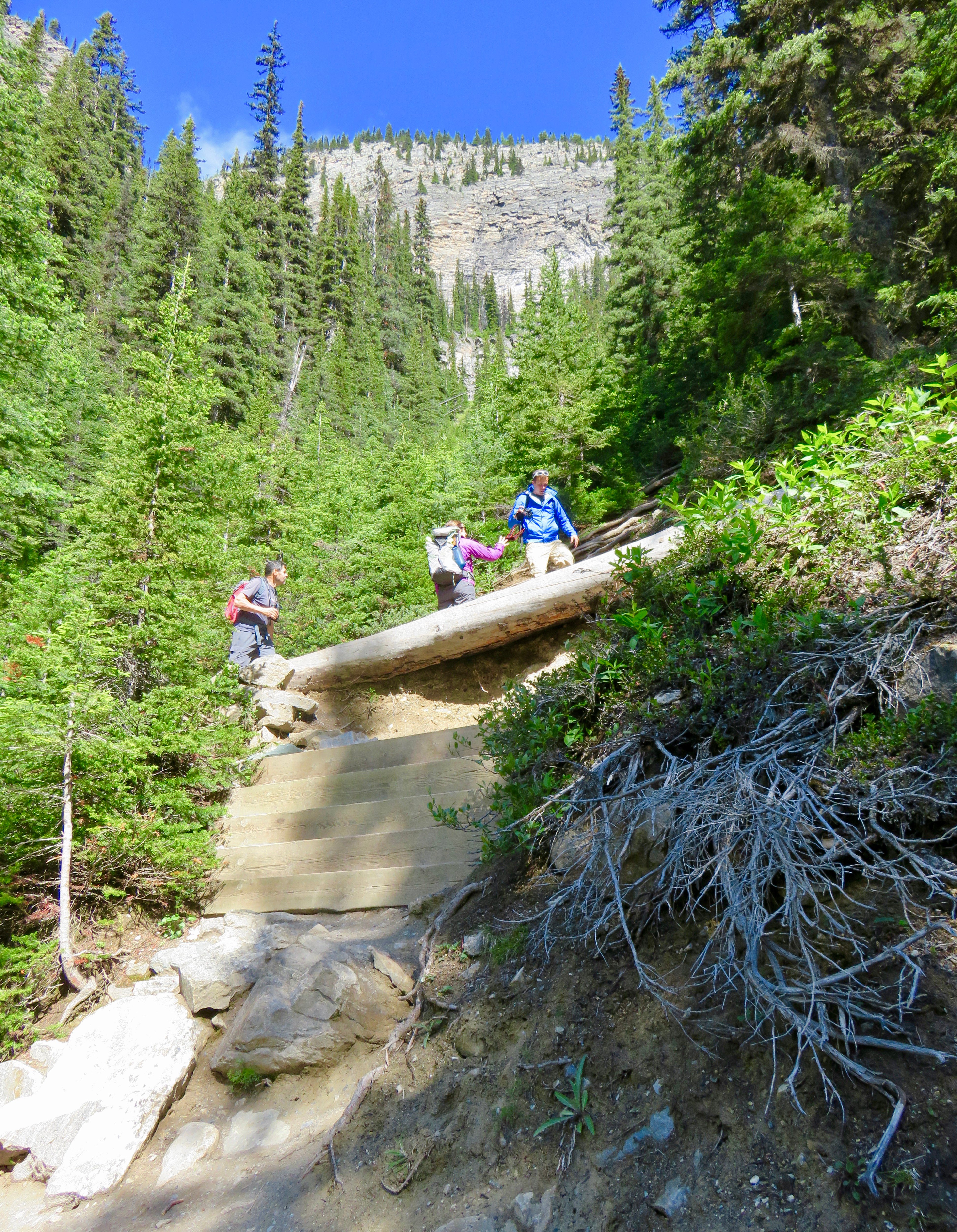 We moved aside for the fellow adventurers taking an easier route down. 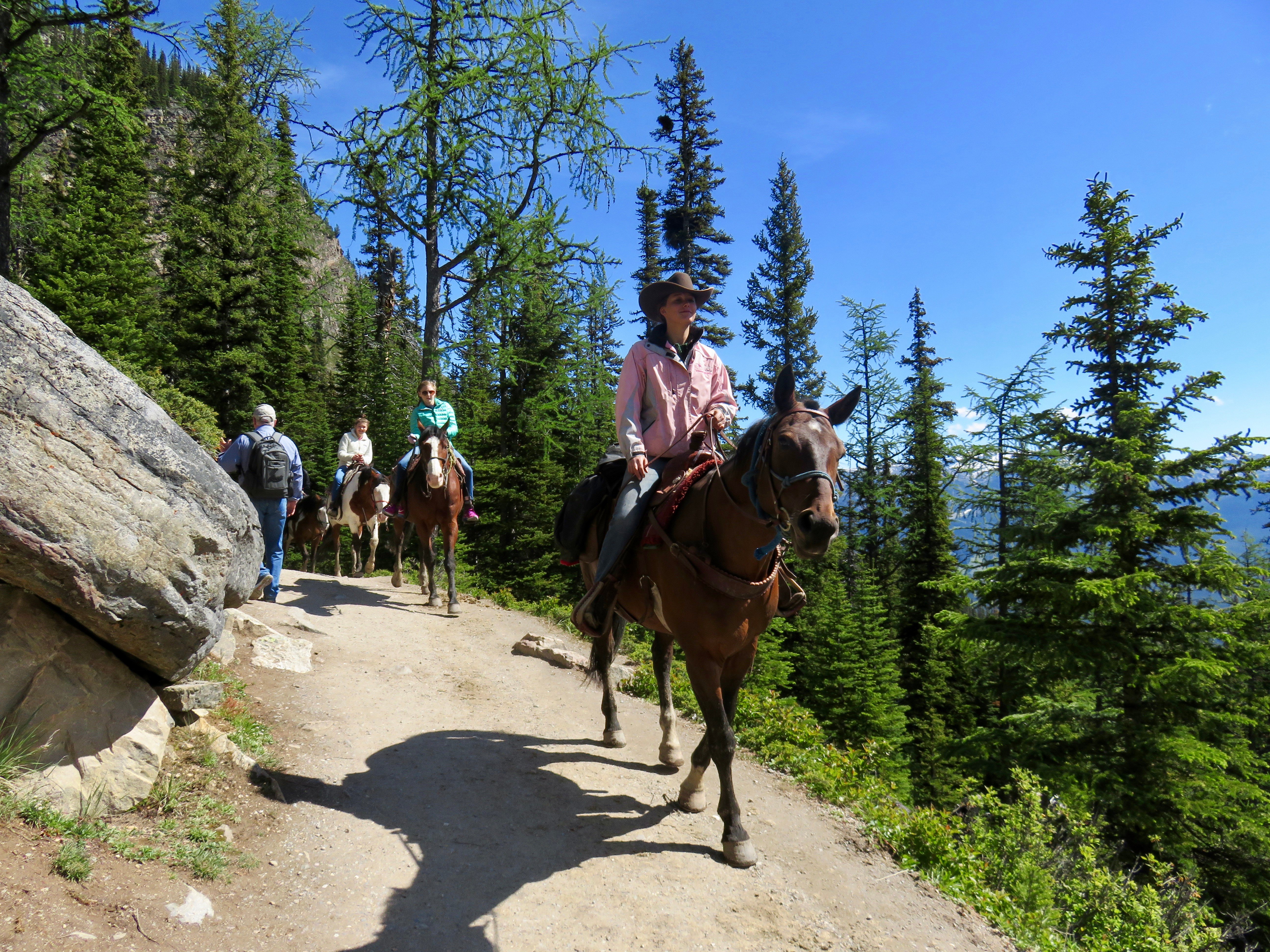 Then we found ourselves by Mirror Lake and then a waterfall. 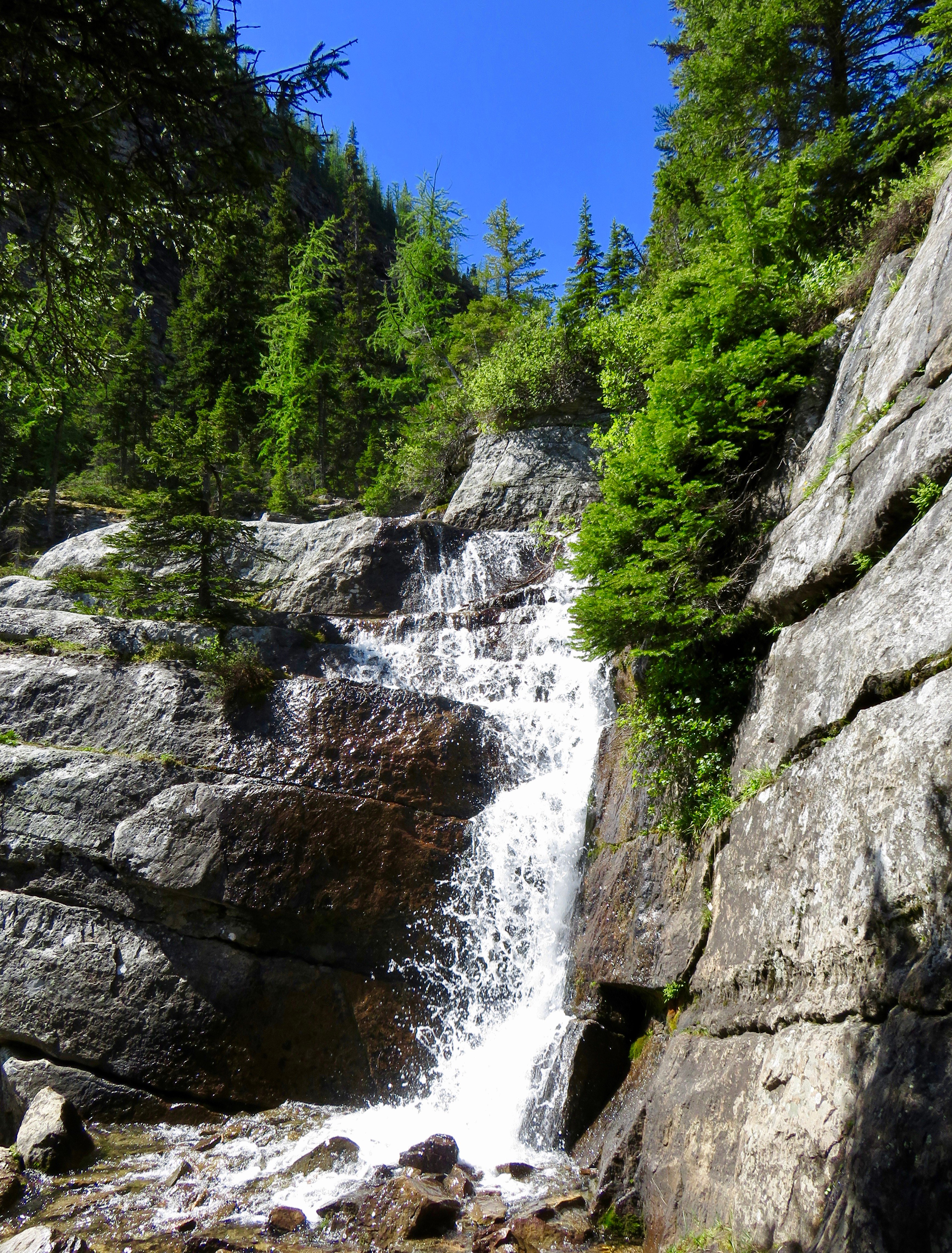 We caught our breath for a moment (or ten) before starting the climb up the wooden staircase looming ahead of us. 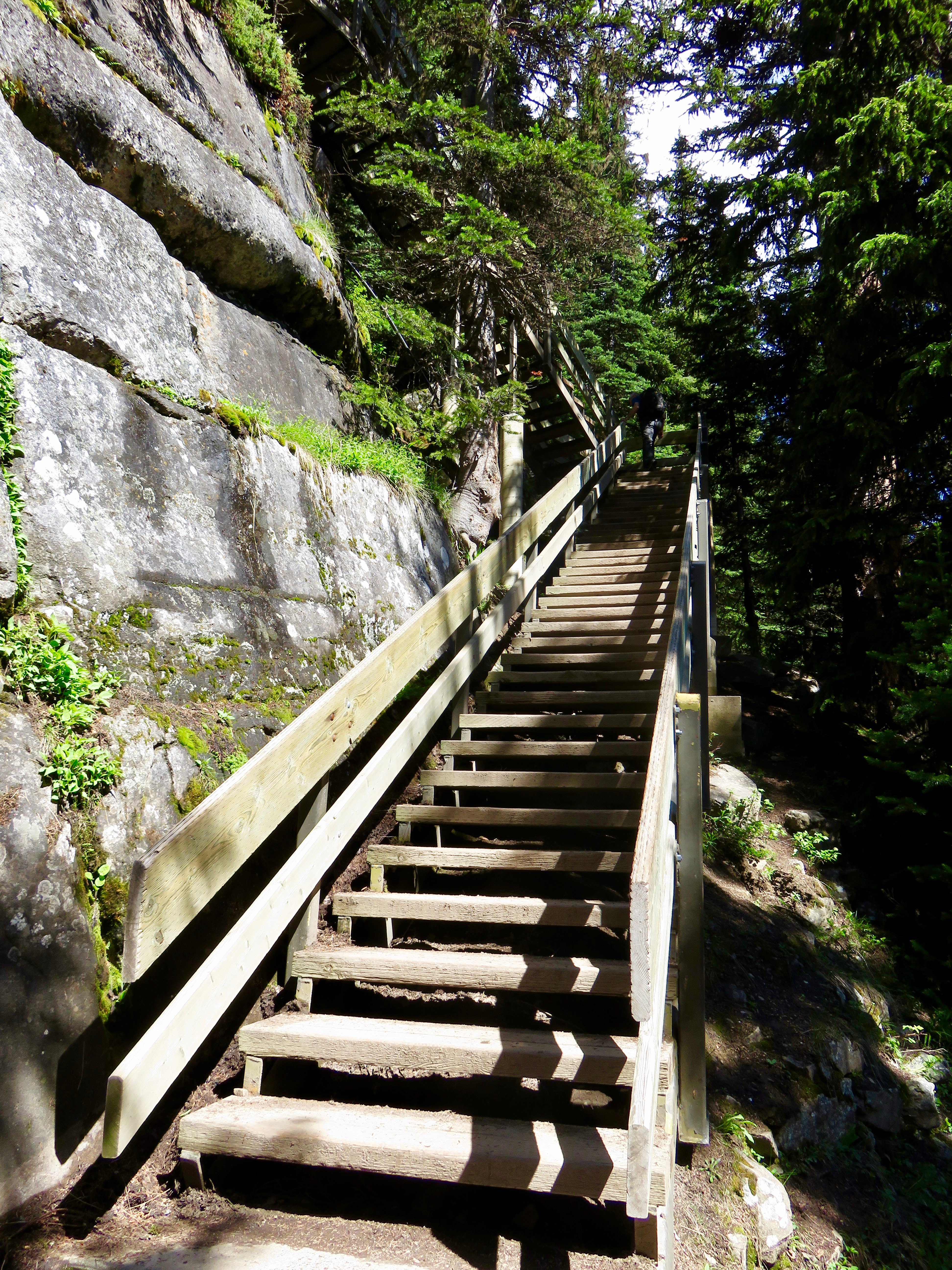 The 3.6 km walk had taken us a little over an hour and we’d gained about 400 feet in elevation. We were now at an altitude of over 7000 feet. 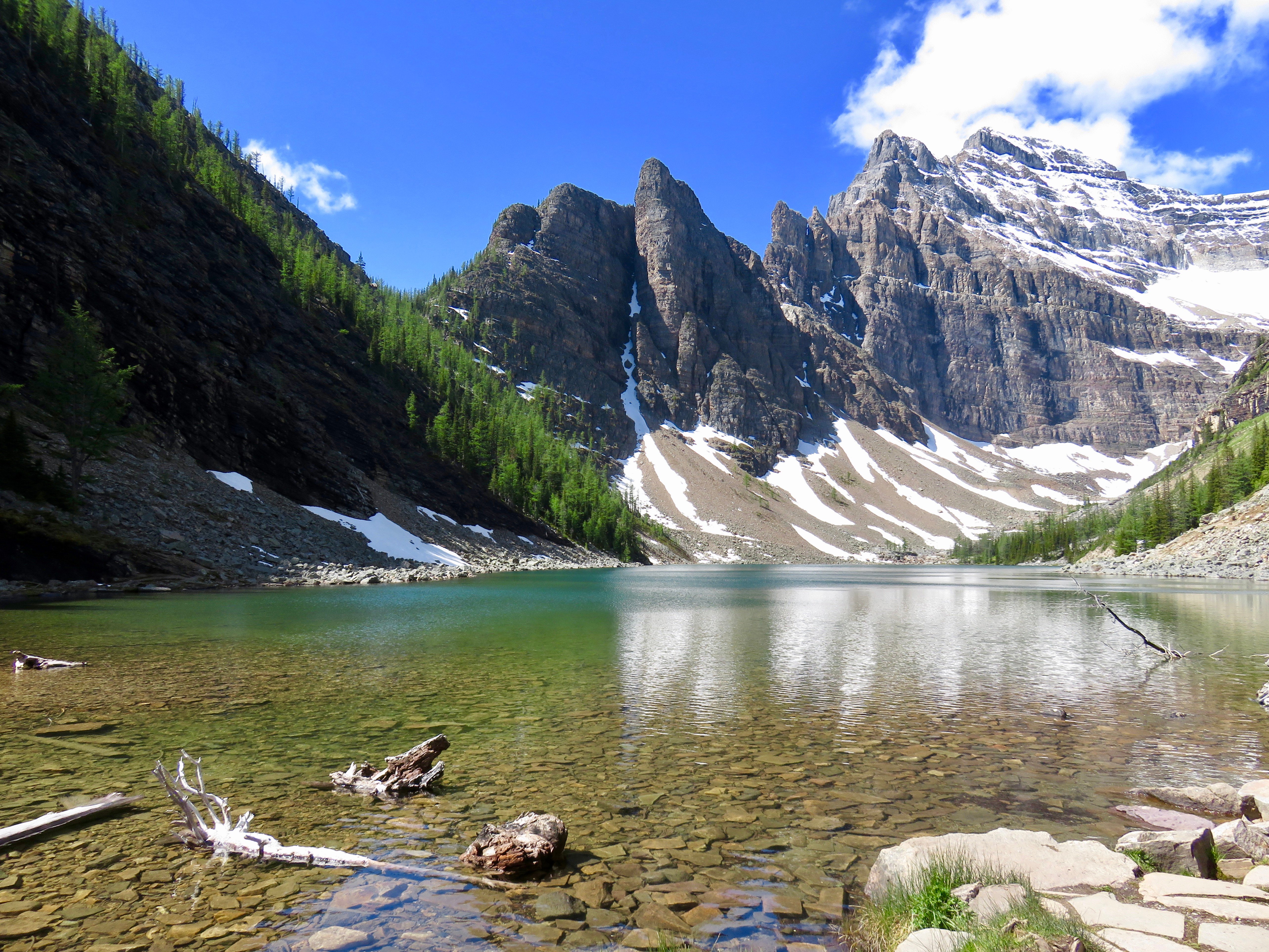 It wasn’t only the elevation that had taken our breath away. The view was doing a pretty good job of it as well. The majestic ice capped mountains loomed their rocky splendour over the alpine waters.  We noted that like us, the arriving walkers came to a silent stop as the magic of Mother Earth enveloped us all with a serenity and a peacefulness that’s simply hard to describe.

Behind us, the family run, Lake Agnes Tea House was a noisy hub of activity. Originally built in 1901 by the CP Railway as a refuge for hikers, it started serving tea in 1905 and today boasts over 100 varieties of the beverage, served hot or cold. The Tea House was named after Lady Susan Agnes MacDonald, the wife of the first Prime Minister of Canada. Although rebuilt in 1981, it still looks quaint and rustic, probably from having used the original windows, tables and chairs. 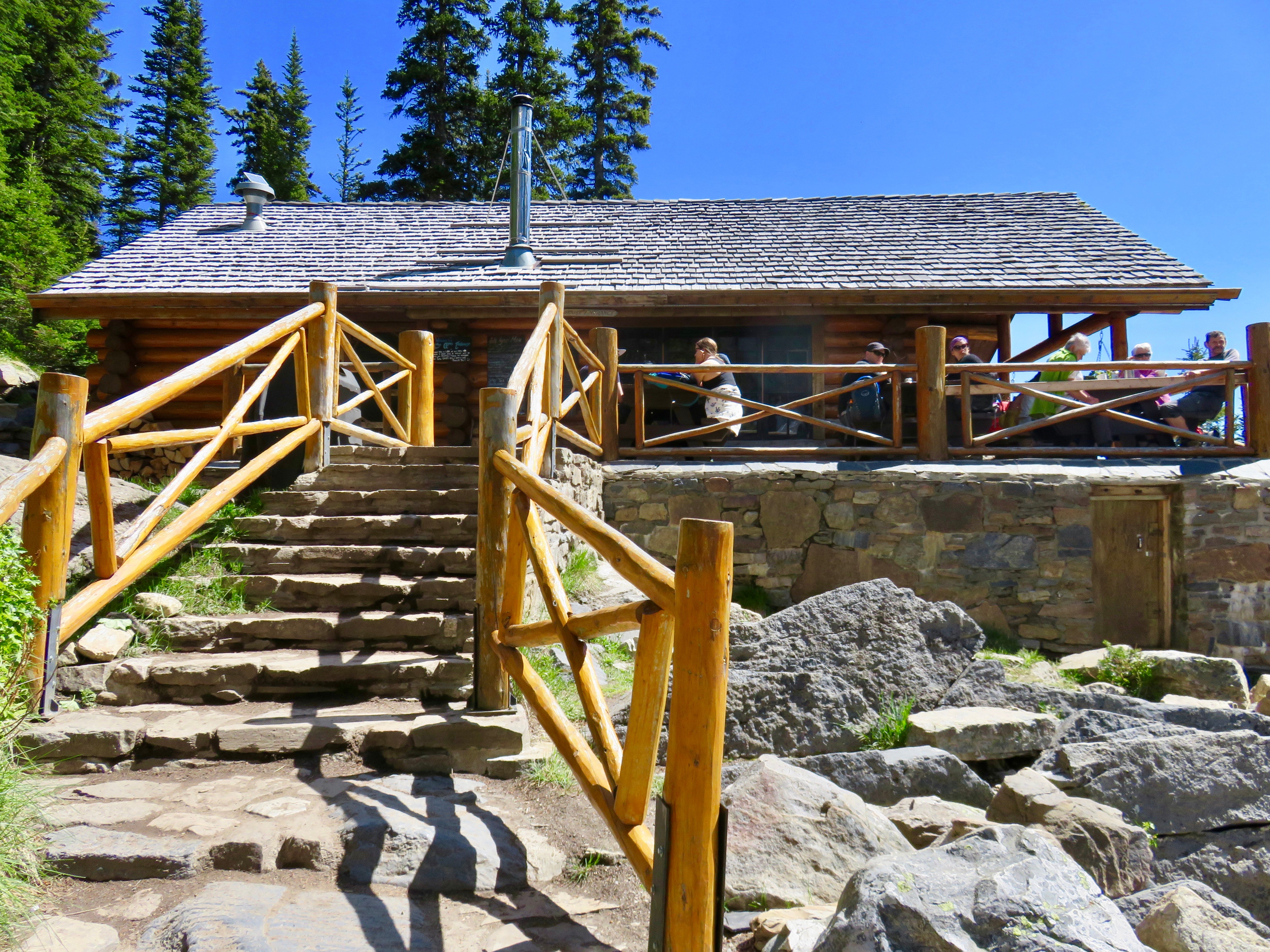 “What can I get you?” Asked the young gal as we snagged the last available spot, right in the corner of the outdoor patio. She smiled warmly as she recited the memorized menu:  “We have homemade soups, sandwiches and house made desserts”

“Me too” said Dave, “And how about one of those cookies” he added, as he pointed to the plate sized Chocolate Chip Cookie going by us, whose freshly baked sweet smells wafted tantalizingly in our direction. 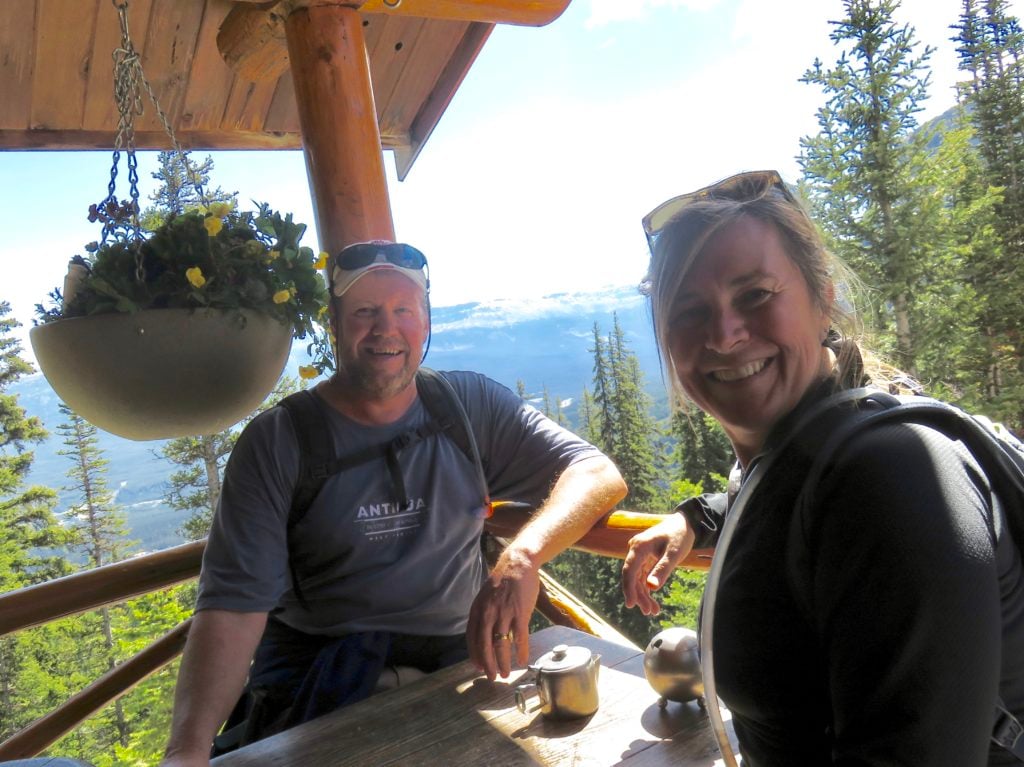 “Could you take our photo?” we asked her, “when you get a minute?”

“Absolutely” she said, as she laid down her tray and asked us to smile. We started chatting, and we found out she was a student from Ontario here for a summer Job slash Adventure.

“You’re lucky you weren’t here yesterday” she announced.”We had a blizzard!”

We mentioned we hadn’t seen any snow on the trails. “We did sidestep a few pretty wet spots on our way up,” I remembered.

“I was getting the pails of water to do my laundry when the storm hit” she laughed.  We learned that most of the staff are students here for the summer, experiencing the location of a lifetime and living a summer adventure. An  adventure that includes life with no electricity or running water. One of their chores is walking the garbage down the route we’d just travelled up, but never coming back empty handed. They bring back fresh supplies to restock the kitchen pantry.  Otherwise a helicopter hovers the delivery of flour, sugar, propane and dry goods of supplies when needed.

“Are you hiking to The Beehive?” She asked, as we paid our bill, cash only.

“The Beehive?” we questioned.

“We did! You mean you can hike up there?” We asked with total disbelief.

“Absolutely! I haven’t done it yet, but the buzz is that it’s great!” She winked as she scurried away to greet the next table.

We checked the time as we gathered our stuff. It was still early. The sign for the The Little Beehive; only 1 km away.

“But just slightly up, right?” I winked.

There were no ominous clouds in the sky, and we must’ve been high on Tea and Sugar when we looked at each other, smiled and said:  “Let’s Do It!” 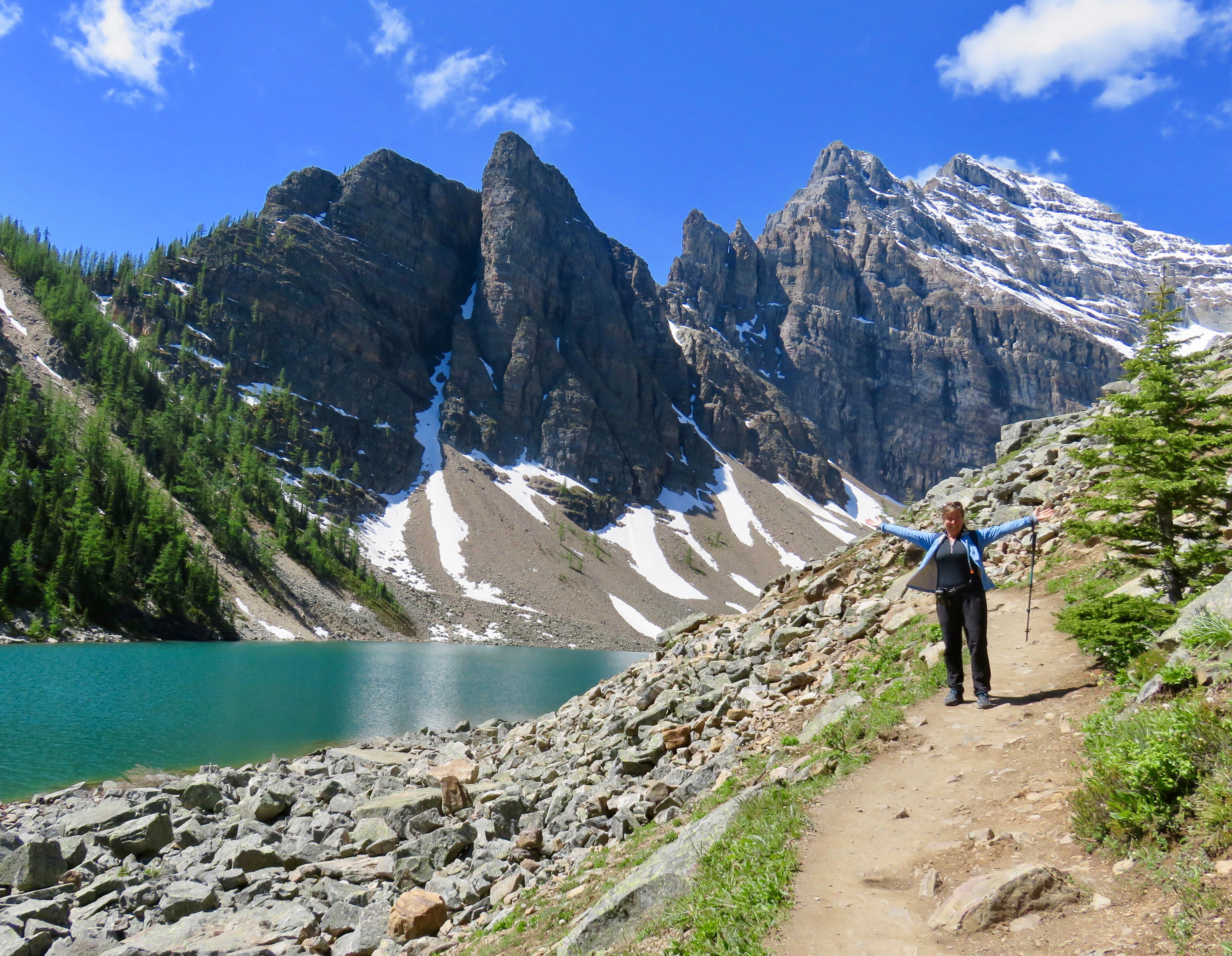 We followed the trail along the shores of Lake Agnes until we reached the Northern End. 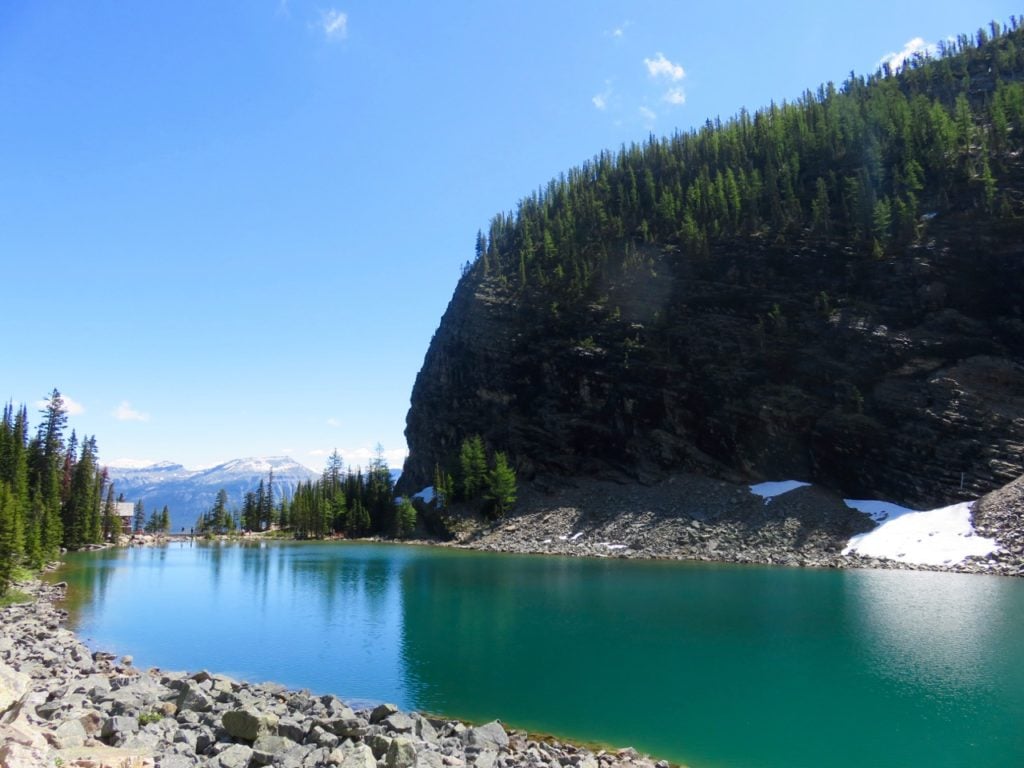 Here, at the foot of the glacier, the landscape changed dramatically. 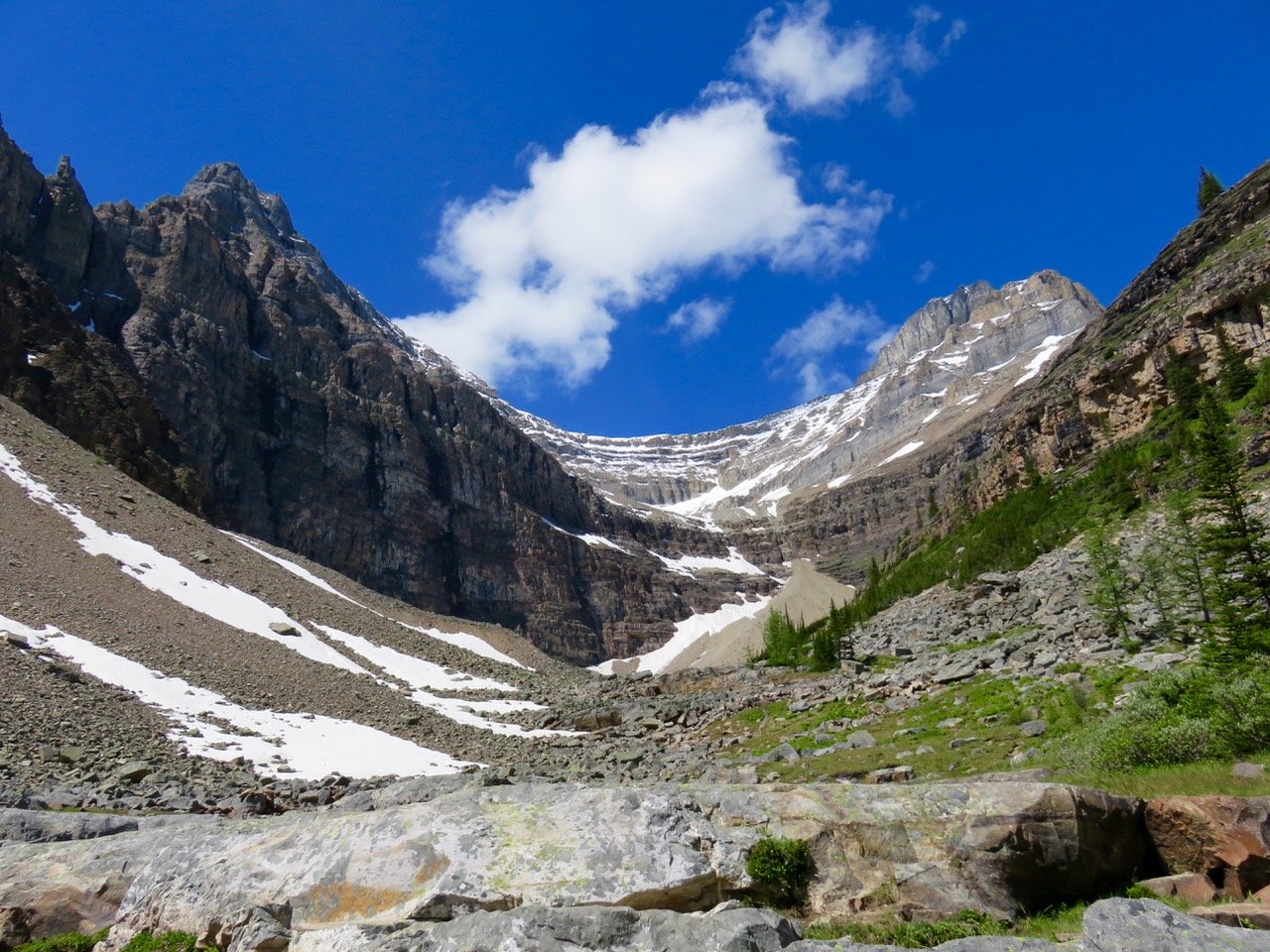 The narrow, dirty grey coloured path of well trudged snow towards the mountain loomed ahead of us. It was slippery. It was cold. And it was wet. 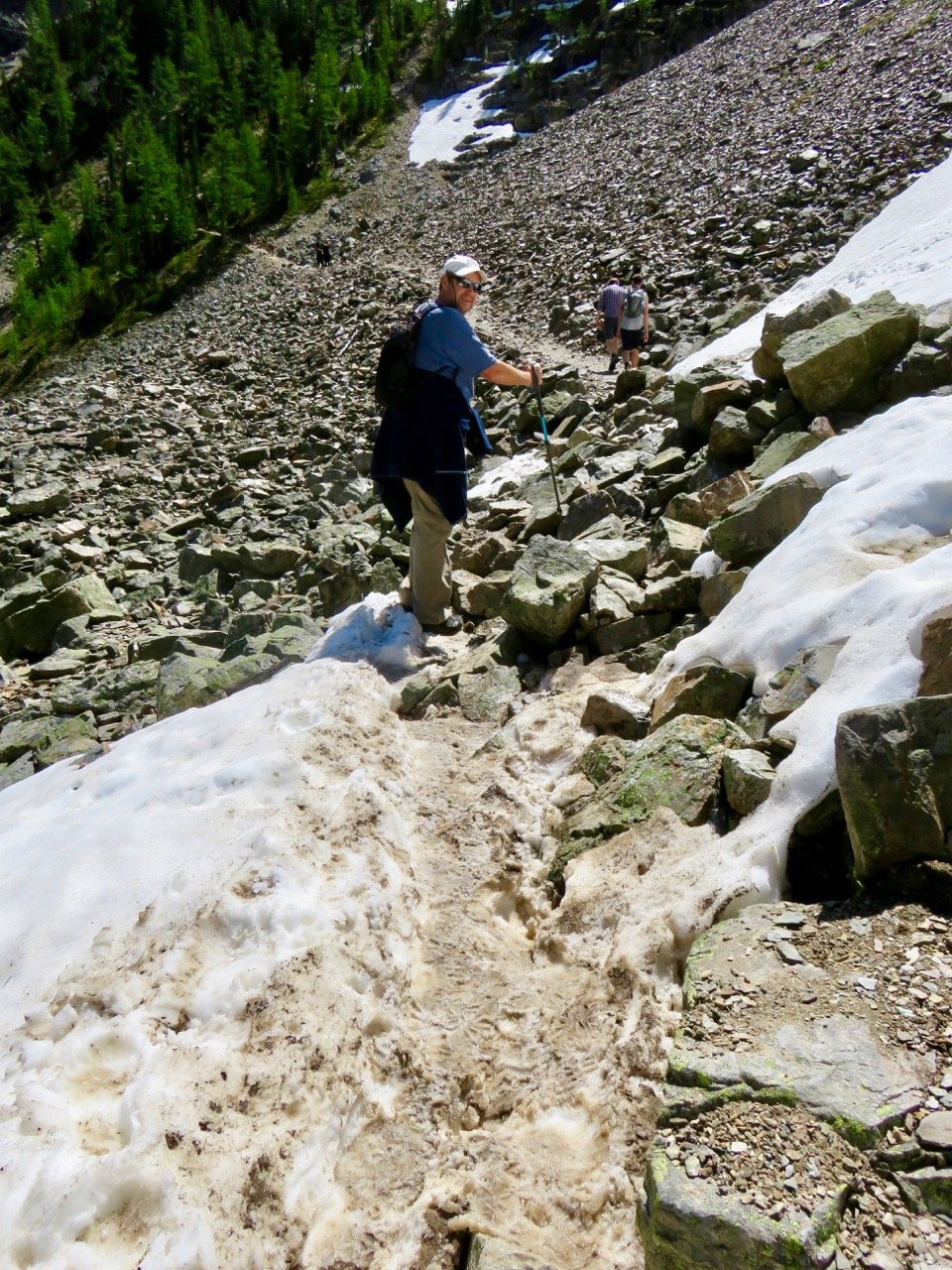 When in snow, do what the snow calls to you to do. That meant a few snowballs went buzzing by Dave’s head. “You’re lucky I’m such a bad aim” I yelled, as I ducked one of his attempts to get me.

At the base of the Big Beehive the snow had melted to nothing but a distant memory. Ahead of us, a series of six switch-backs leading up the side of the mountain. We took a deep breath, gazed upwards and started walking, pausing every now and then to catch our breath, still our shaking legs, and always with the excuse of getting that perfect photo, which does nothing to describe the heights of where we were going. 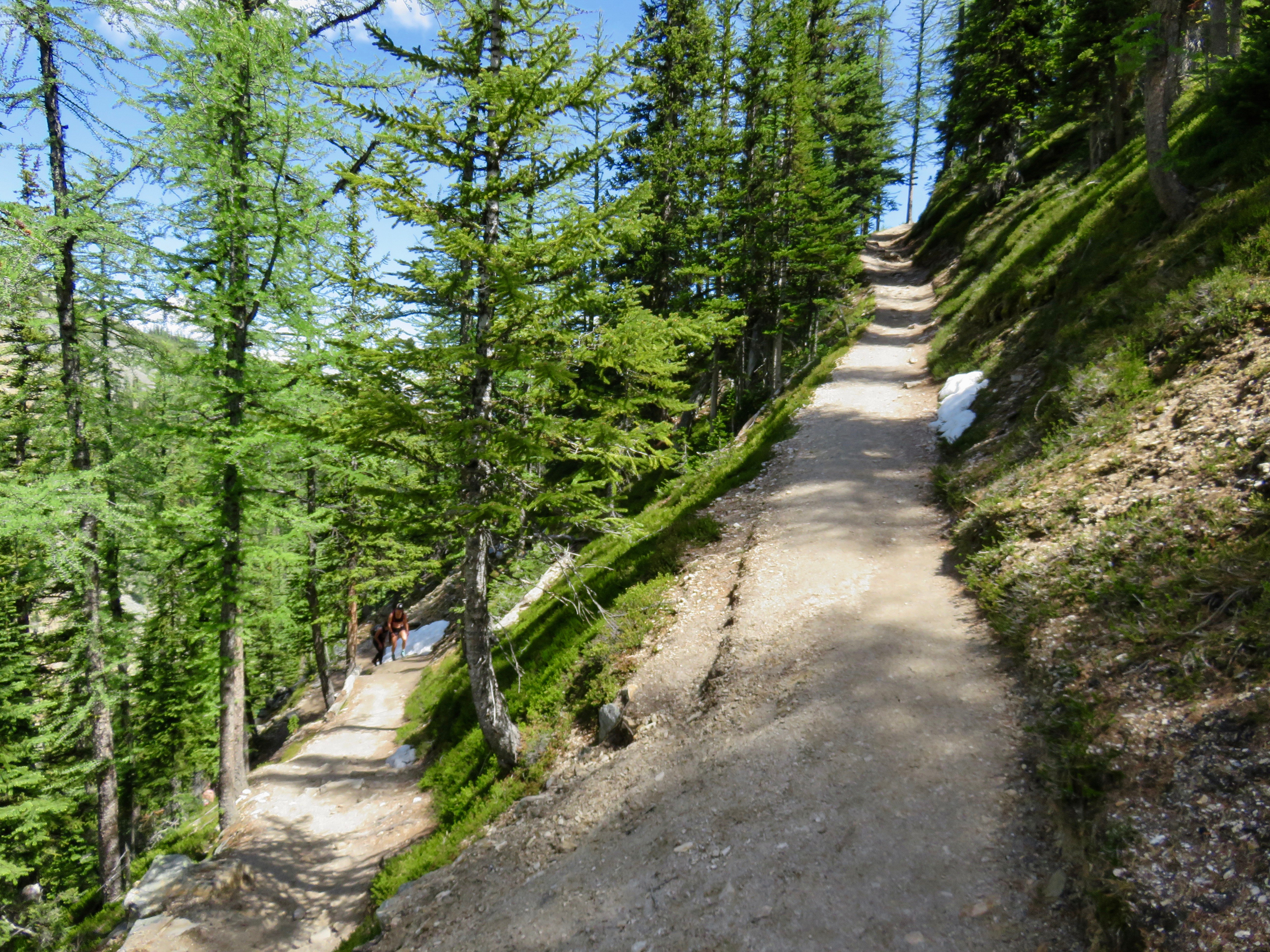 “Don’t look down” said Dave, as he turned a little precariously sideways on a particularly narrow ledge. I stopped, and immediately looked… down. My hands clasped the boulders I was sidestepping with a white knuckled hold, as waves of fear of heights type of panic quickly settled over me. A few minutes of coaxing from Dave, a few minutes of relaxing deep breathing, and a sheer sense of “Hell no, I’m not going back down” finally had me emerge from the anxious sate, release my Death Grip on the boulder, and move on.

Two more switch-backs and we emerged at the top.  Words alone cannot describe the euphoria of being up here: on the rocky flatness that is the odd shaped mountain called The Big Beehive.

“OMG, look, that’s Lake Louise beneath us, and you can just barely see the Fairmont Chateau Lake Louise there!”

“Look at that unusual green colour of the water!” said Dave.

“I read that it’s because as the glaciers melt, they carry in glacier silt, or rock flour…” 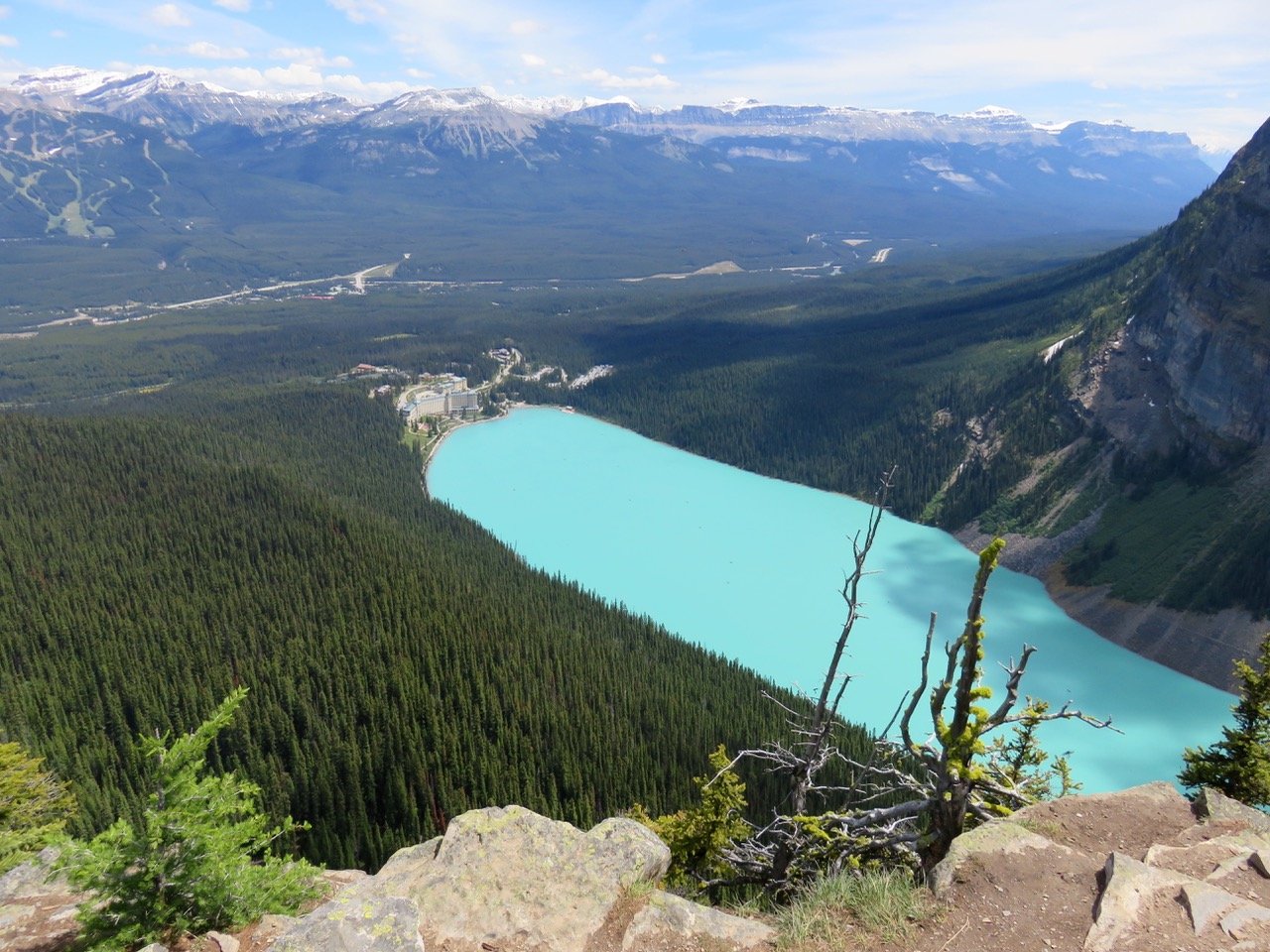 I paused, as I looked down, and marvelled. “This silt stays suspended in the water, and the sunlight reflects off it, which is what gives it this amazing hue of Minty Toothpaste Green”.

We chose to take another route back. Without switch-backs it was a little harder trudging downwards over rock and pebble and boulder, while simultaneously sidestepping the protruding tree roots. Our feet were getting tired and we were taking care to position our feet properly before stepping away.  We saw the sign for the Plain of Six Glaciers Trail (and another Tea House) but as much as we were tempted, our common sense currently located in our grumbling hungry tummies prevailed. We kept on going: onwards, downwards and homewards.

The heat of the afternoon sun warmed us, and we sweated on, the tall trees providing not only shade but a protective tall barrier from the dropping cliff edges on the other side. 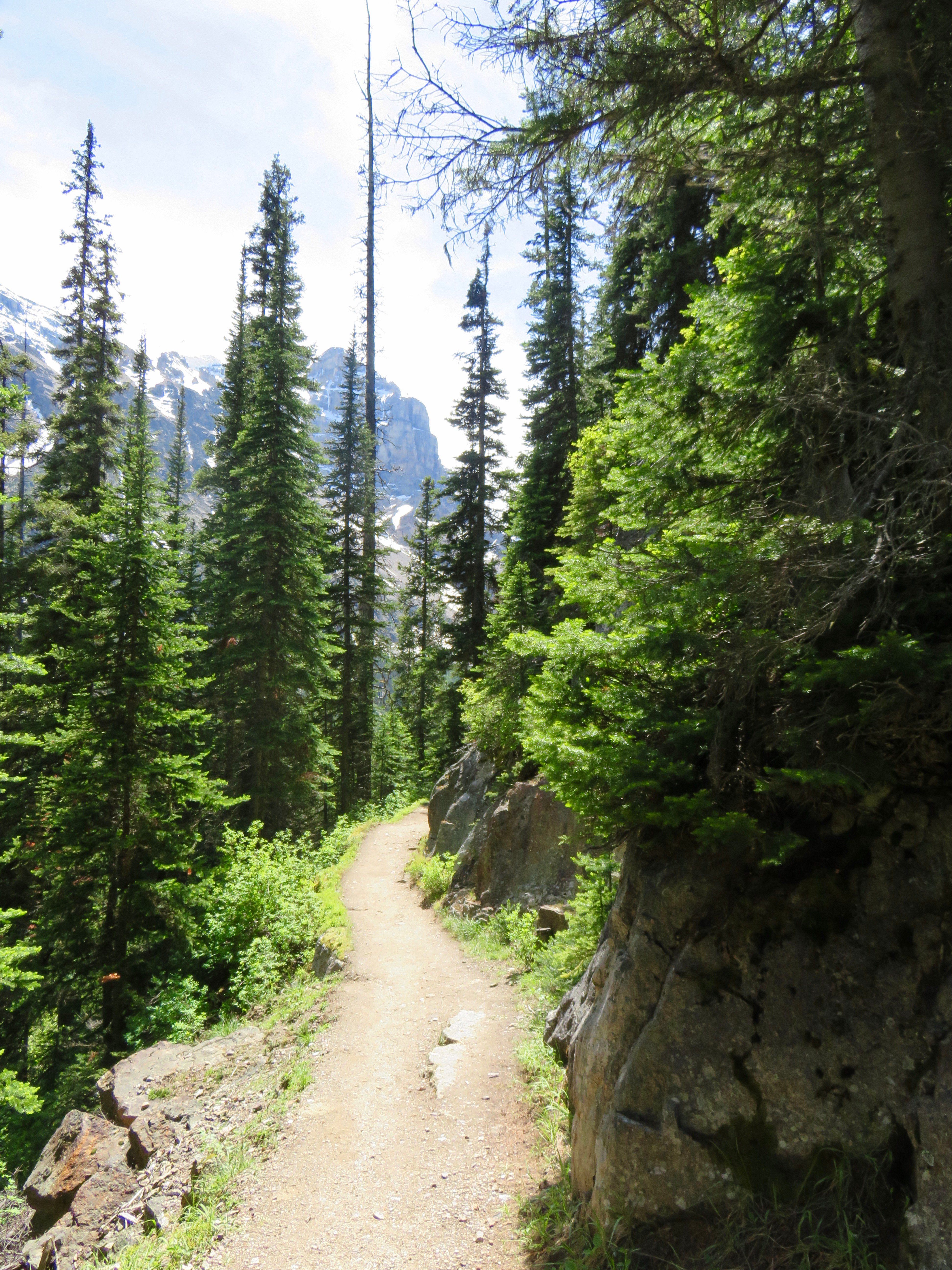 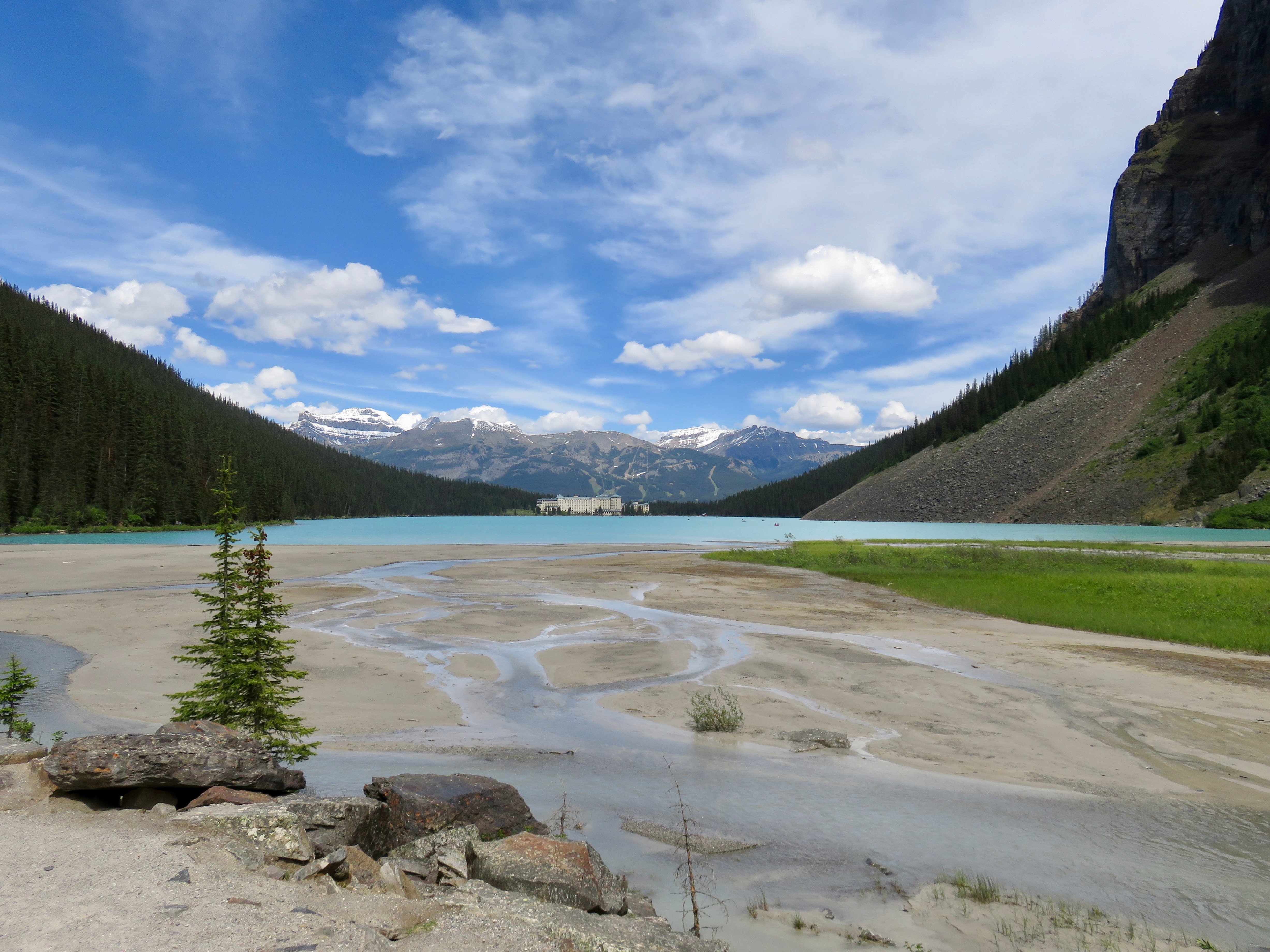 The sand flats here seemed out of place. We stopped to marvel but knew better than to sit down. Knowing it would be harder to get back up and get walking again.

“Look how small The Chateau looks” I said with a sigh, “We’re still a long way away!”

Stepping away from the sandy shores we followed the path back. 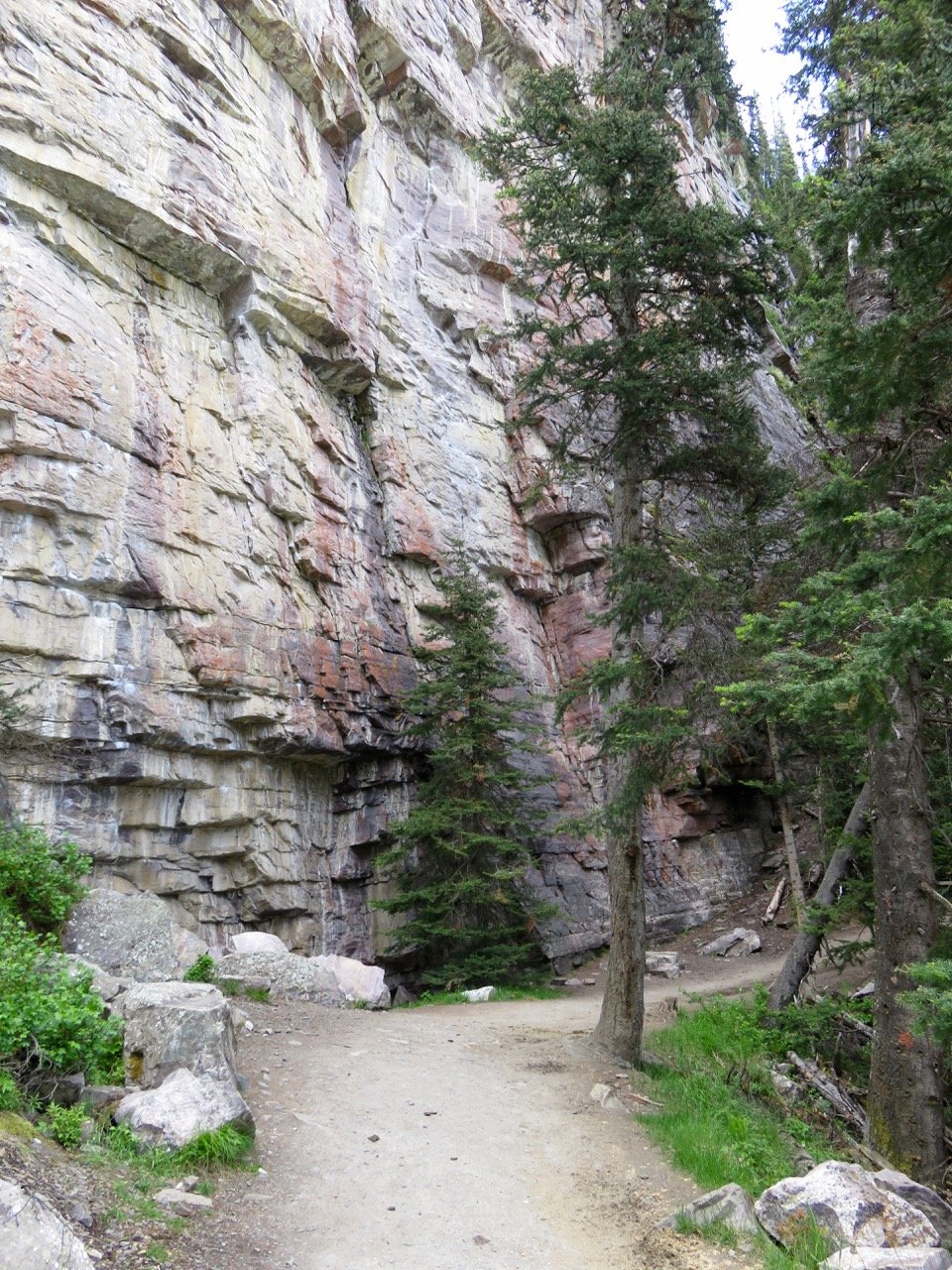 “The last mile is always the longest isn’t it?” I moaned.

“Hmm, I lost count of our km’s a long time ago” said Dave, “I think we’re somewhere around 16 in total!” I nodded bravely as he added, “We’re almost there!”

I don’t know how we managed the last few steps into the lounge of the hotel, where around 6 hours after we’d started that morning, we sat down, red-faced with exertion, and sighed in total exhilarated exhaustion.  The waitress brought our ice cold refreshments and our lunch, and knowingly smiled as she said.

“You just back from hiking? You sure look like you’ve got The Big Beehive Buzz!”