On the Road with Al and Ev. Wyoming, Mt. Rushmore, Wall Drug, and a Prairie Home

We never appreciated Florida as much as we did these last five days: bitter cold (32 degrees and up), howling wind, no cell, no WiFi, very long walk to nearest pay phone, and intermittent rain and hail.

But here we are, safe and sound and WARM, in Buffalo, WY, in a lovely KOA park. This campground was just the thing we needed: great shower, great laundry, chaises on our patio, and helpful, delightful folks in the office. They set us up with our computer with WiFi access, let us use their phone, and when not engaged in the above, we slept and ate, slept and ate, and sunbathed.

We left Buffalo, WY, at 5:30 in the morning, and you might ask why so early. Well, now it can be told. We had been having an electrical problem—the old vets in RVing call it the Shakedown Cruise, i.e. the first trip in a new RV, and they have that right. The electrical problem was manifesting itself in 1) no hot water and 2) a piercing siren-like series of beeps starting at about 9 pm and lasting all night the first night until Allie went outside and pulled the plug—another meaning from the one we know about. As you know, when you hook up an RV you hook up to water, waste disposal and electricity, and once he pulled the plug the beeps stopped. Good thing, since it was about 4 o’clock in the morning. The next two nights we pulled it earlier and set about trying to find someone to fix it. These were the days in Yellowstone (cold, isolated, no services) so we were stuck with our problem. When we were able to get a call out via a pay phone and a pocket full of quarters (remember those?), the wonderful RV AAA lady told him to go to Rapid City, SD, where there was a good mechanic for RVs. We had a 10 am appointment. Thus, our 5:30 am start. Yes, the mechanic explained everything to Allie and told him to have the problem adjusted at the RV place where we bought the Sabel and until then told him how to deal with it. So now we have hot water and we are pretty sure no beeps. 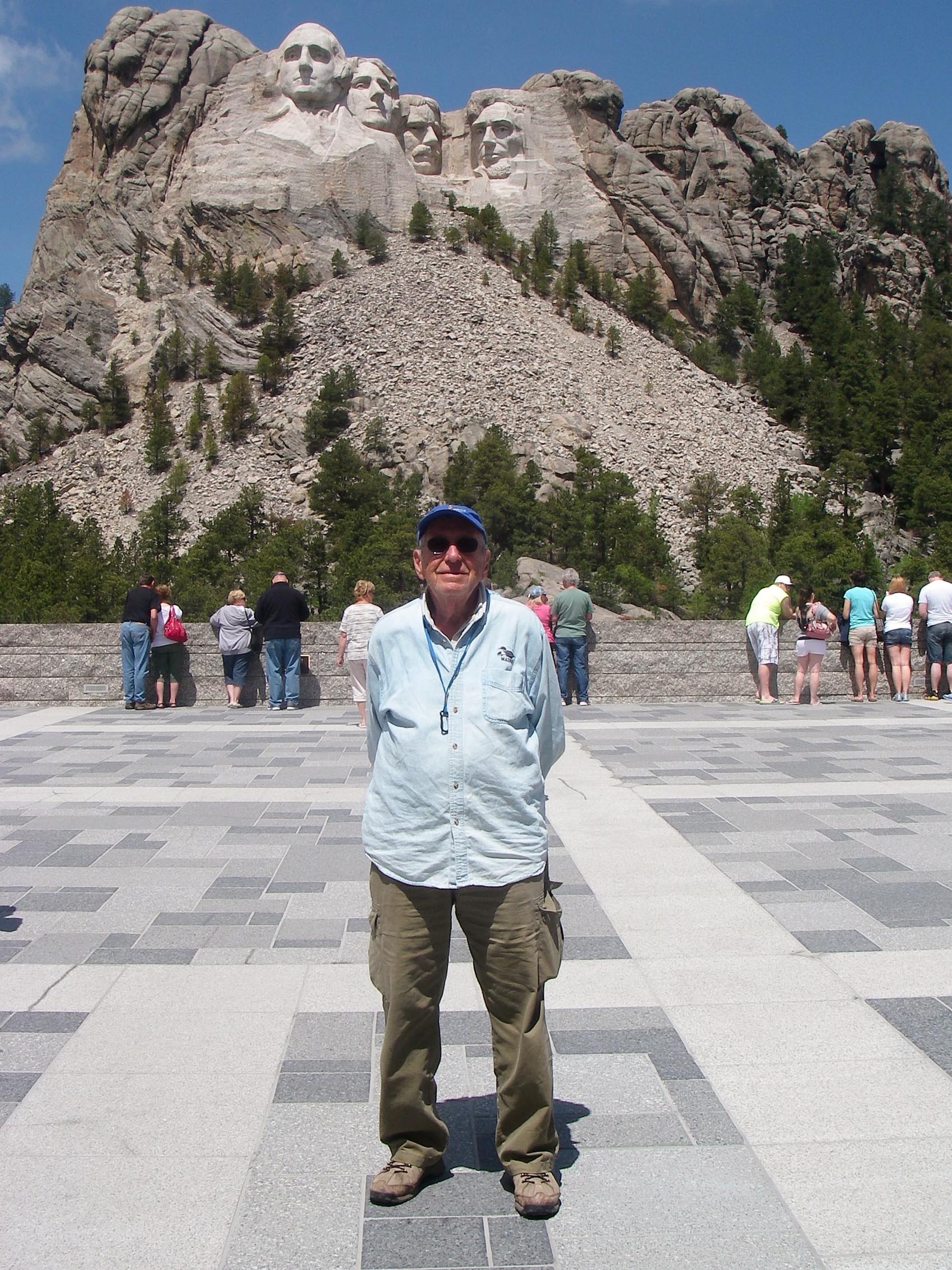 From Rapid City we went to Mt. Rushmore, which we really enjoyed. Picture the sculptors hanging onto that mountain and producing such a wondrous carving! We were sorry to see that all the towns surrounding it, particularly Keystone, have commercialized the Rushmore experience. Honky-tonk, like Revere Beach (Bostonians) or maybe Coney Island (New Yorkers) and so sad. But Rushmore itself was inspiring and we had lunch at the restaurant that appeared in the movie North by Northwest with Cary Grant, and we can’t remember who the actress was. Another lookup. Lunch made up for breakfast, which was a gas stop at a truck stop complete with burritos, quesadillas, and every manner of McMuffin. Sodium heaven, but when you’re hungry…

Wyoming was gorgeous—green everywhere, on the fields, the foothills, the National Forests and the mountain ranges. South Dakota started at Spearfish with a view of the Black Hills National Forest—also very beautiful.

The road to Wall Drug (more about Wall Drug later) and the Badlands took us through gorgeous highways, surrounded by the Black Hills. Thick forest, red-rocked hills, small homes tucked into the mountainside, acres of ranches filled with cattle, and a beautiful day of 50 degrees with strong sunshine after a cold night of about 40.

Now, Wall Drug. Founded in 1931 by Dorothy and Ted Hunstead, a young couple with children, it sat idle for about four years. Cars went by but no one stopped. Then Dorothy came up with an idea. She told her husband that the travellers going by were tired, and most of all, thirsty. She encouraged him to put signs up on the road (like Burma Shave for those of you who can remember those) telling travellers that Wall Drug had free ice water for them and would also fill their jugs. It worked and people began coming to Wall Drug. Over the years, they extended their idea with signs all over the country (where allowed) and even some in Europe. Wall Drug is now world famous with up to 20,000 people stopping and shopping on a good summer day. They also serve 5,000 free glasses of ice water every day.

We were sure that such hype could only be a disappointment, but it wasn’t. It was wonderful. We travelled from room to room, shopping for necessities and for fun, and ended up at the Cafe where we had a wonderful burger and a wonderful chicken sandwich. The homemade blueberry pie was really homemade. Population of Wall: 831 and we think they all work at the Drugstore.

Then to the Badlands, from which Wall gets its name. A rock wall surrounds the park, and each lookout gave us different views of a landscape that looks more like a movie set than the real thing: mounds of rock, turrets, spires, buttes, pinnacles, valleys and gullies. Lush green prairie sat beside the rock outcroppings, which added beige, lime, orange, and pink. 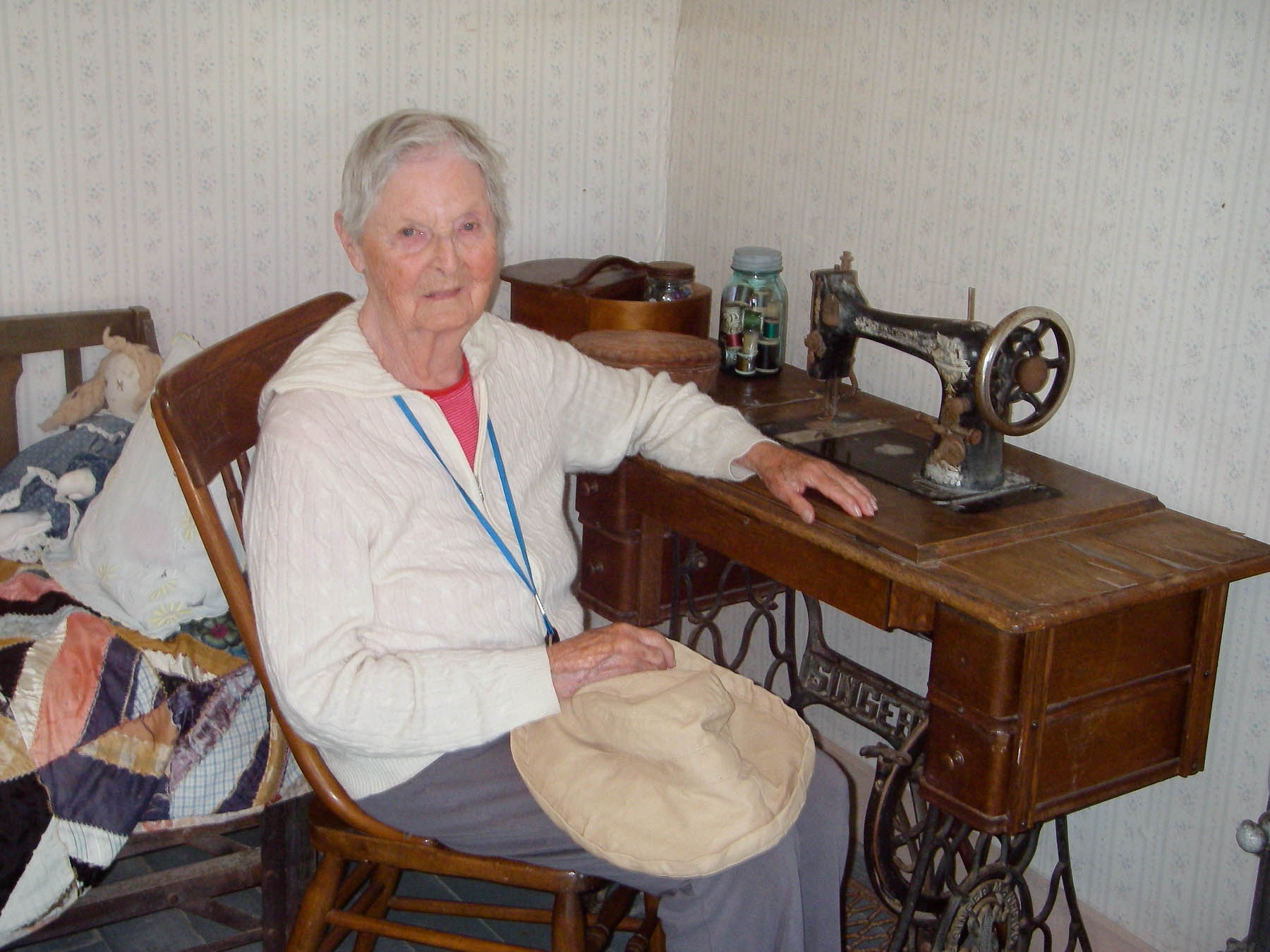 A word about the Prairie Home. It’s an original home from 1909. Built on the 160 acres the government was offering through the Homestead Act, it was built of cottonwood beams and sod. The tiny rooms with rock floors must have been pretty cold in the South Dakota winters, but they had plenty of wood to burn. They dug a cave into the mountain to keep their food cold and in which to weather a storm if needed. They may have been colder than we were in our RV in Yellowstone.

The Sabel III now has its own name. Our original Sabels I and II were the boats we had when the kids were young (and we were also young). Susan-Albert-Bill-Evelyn-Lerman—that’s where the name came from. We went from a 24-footer to a 36-footer and had a 42-footer on order when it dawned on us that the kids really wanted to stay home with their friends. So we cancelled the big one. We’re now back to a 24-footer on wheels, which really does feel very much like the boat. 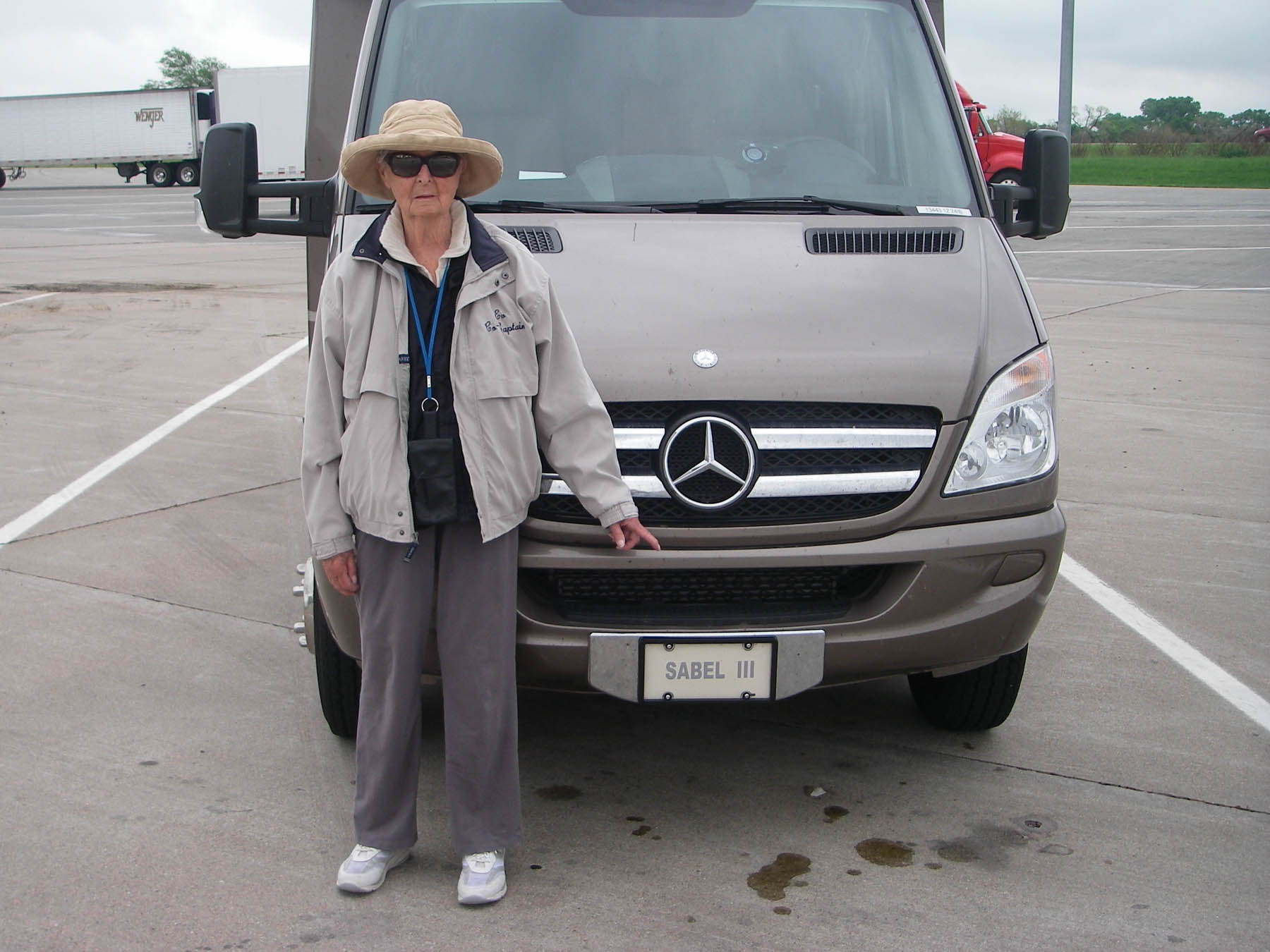 The day dawned grey, the clouds gathered, and the rain poured as we began our trip home to Maine. We’re doing shorter trips because we learned that 500-mile days were too exhausting. So we arrived at Mitchell, SD, in time for a shopping trip to Walmart and lunch at Subway.

The trip was straight I-90 for 250 miles. What could I write about? My dear Mother used to say, “Anyone can play with good cards.” So here I am with no national parks, but still a wonderful country to explore. Sure enough, we found a Lewis and Clark exposition at a traveller’s rest stop and people wearing bison hats, so they looked like buffalo heads. We even took pictures, but everything was too dark, so my words will have to do. The road itself was miles and miles of prairie, very green, with water stations, ranches, cattle, and rain.

As there wasn’t much to see, I began musing about life on an RV. What do you gain and what do you lose? Of course you gain mobility, freedom to go anywhere you wish, wonder at a world we’ve not seen before, convenience of having your own bed, bathroom, fridge, stove, heat, AC, etc. And what do you lose? Well, the first thing you lose is your sense of privacy. Nothing is sacred, but when you’ve been living with someone for 65 years, very close to 66 in a few weeks, you didn’t have too much privacy left anyhow. You lose the need for stuff. You’re living with 2 juice glasses, four mugs, four small plates, four large plates (which we haven’t used), and four pieces each of the silverware we are accustomed to. There’s no room for more, but even if there were room, you don’t need more or even want it. Simple is good. Simpler is better. You lose the need for big meals. Soup and a salad, and maybe some bread to go with it—it’s plenty and it’s nutritious. We seem to snack a lot, and our Keurig is the absolute best for a quick coffee or tea. So the losses become plusses and life on a RV becomes fun. It’s two grownups playing house.