Taking A Ride On Ontario’s Superior, Wild Side

Last time we met, we finished the first leg of a 1,500-plus-mile drive around the world’s largest lake, Superior. We drove our Leisure Unity from the eastern Upper Peninsula of Michigan, to just south of the border at Grand Portage, Minnesota. Now it’s Canada’s turn.

We’ll head to the lake’s less-populous side, the stretch of the Trans-Canada Highway running from historic Thunder Bay, where 18th-century fur traders opened Western Canada and the U.S. to Europeans, to Sault Ste. Marie, Ontario, at Superior’s eastern terminus, site of the world’s busiest locks, and the bridge back to Michigan.

And we’ll discover some of what makes this side of the lake great, from a reconstructed voyageur fort and its importance as a water highway then and now, to its home for some of Canada’s most famous artists and of course, lakeside beauty. 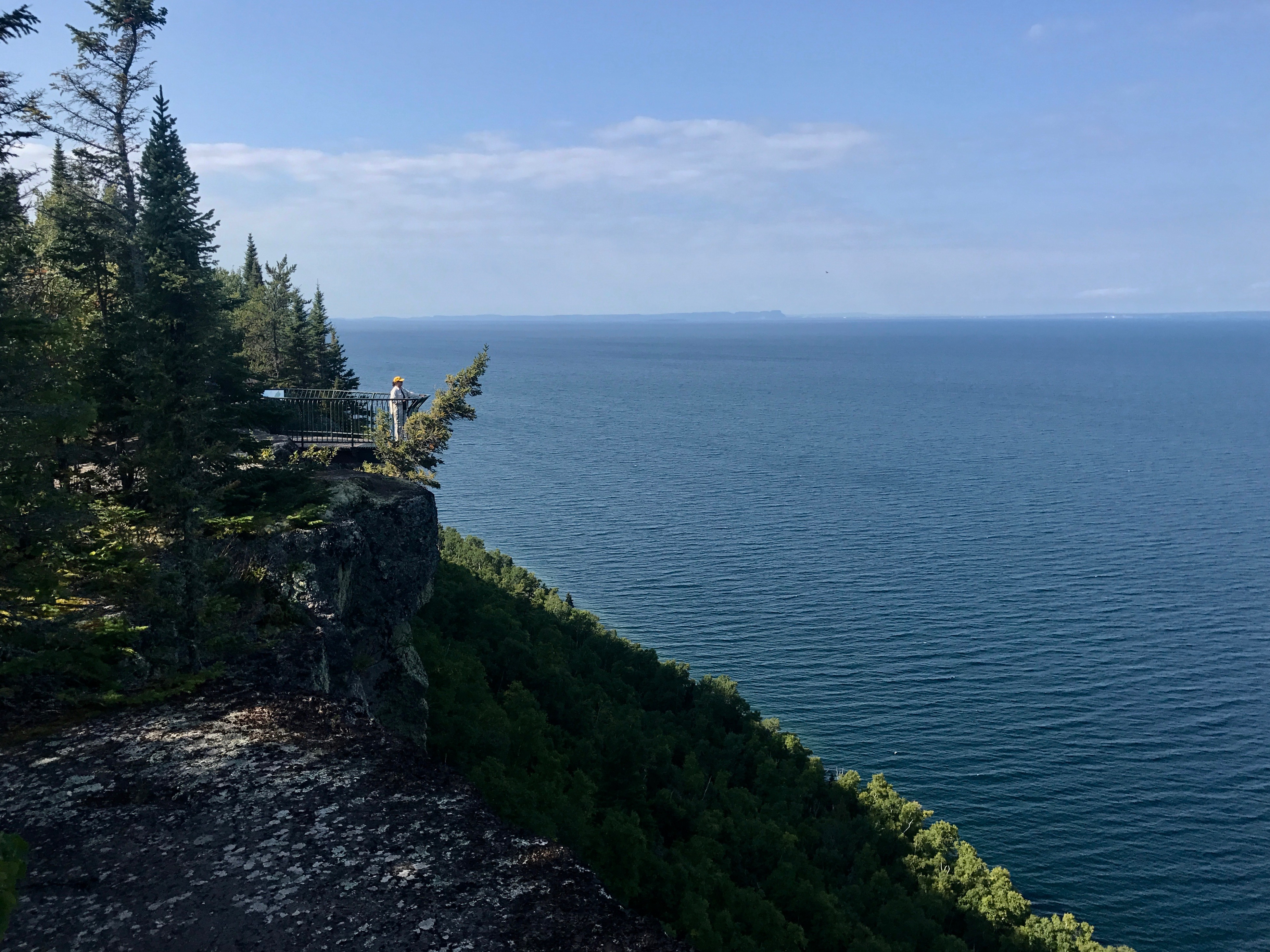 A few tips: Once you cross the border, you won’t be wandering much off Highway 17. That’s the Trans-Canada, which bends and weaves east to west along Superior and around the glacier-exposed, rocky-topped hills, the basement of North America that have been dated to more than four billion years old. You’ll pass through some of the most remote lands on the continent near major cities. There are only a few major routes leading off it, especially going north. What you will find there ranges from history to scenic views, to fishing and kayaking opportunities, and great lakefront campsites that will bring you back for closer, longer, looks. 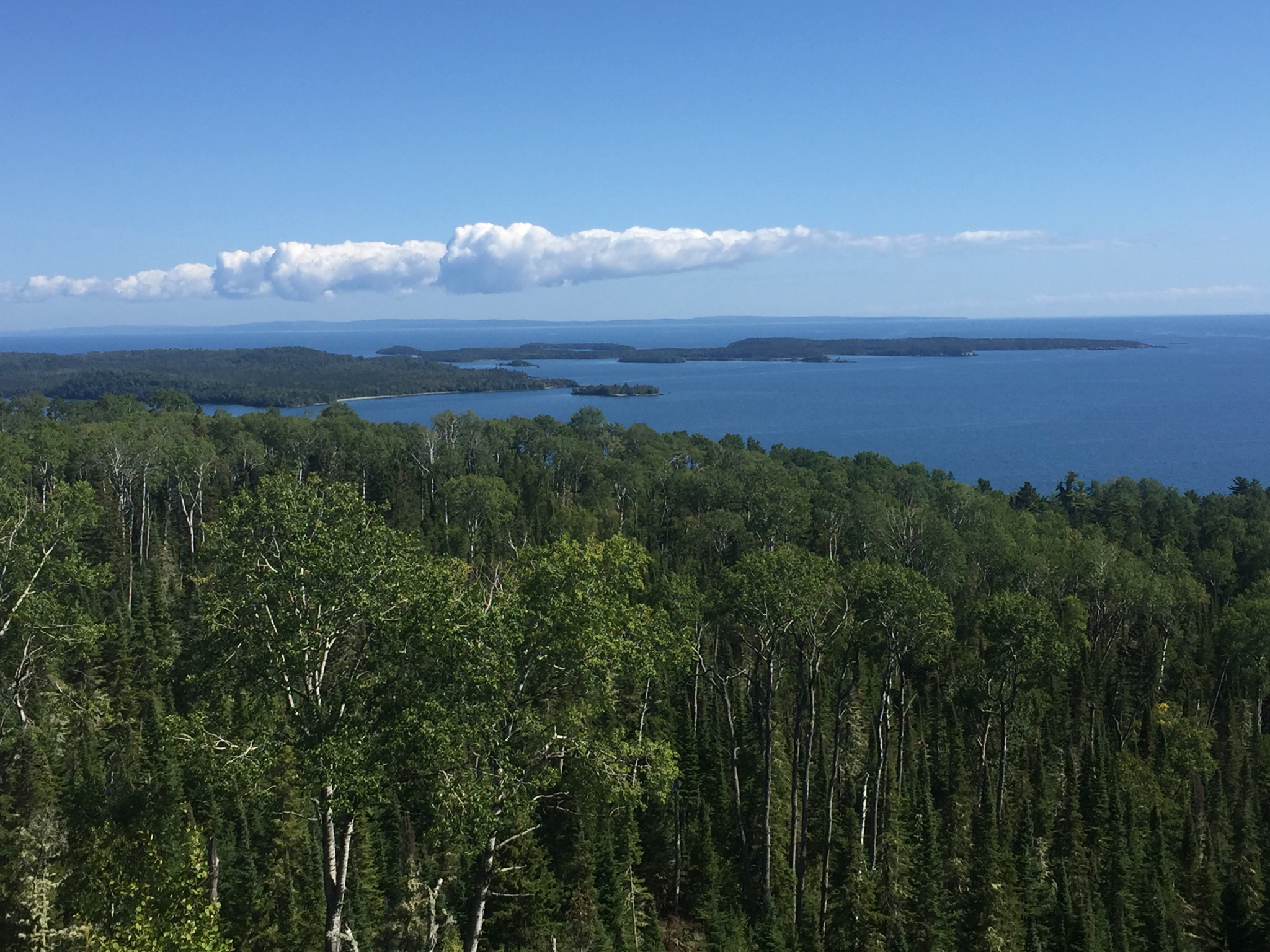 One of several lakes, overlooking near Grand Portage National Monument at the U.S.-Canada border south of Thunder Bay, Ont.

Just before the Ontario border, Minnesota’s Grand Portage National Monument is worth a visit. It was once the center of the 17th-century voyageur and Ojibwe fur trade, located on a strategic portage between rivers and lakes that allowed exploration and exploitation of much of the now-western U.S. and Canada. It was the center for furs exported via Lake Superior to the east and Europe, spearheaded by the North West Company and its more well-known but lesser rival, the Hudson’s Bay Company. Exhibits in the Great Hall visitor center detail its importance before it moved to our next stop, Old Fort William, in Thunder Bay, Ontario. The trappers proved so efficient, they just about wiped out the continent’s beaver, which fortunately are doing just fine now.

After an easy border crossing with our cats Muka and Sadie, who remembered to bring their necessary vaccination papers, we headed to the Thunder Bay’s historic Old Fort William. Things quiet down at this reconstructed 1800s trading post after Labor Day. The re-enactors and First Nations Ojibwe who tell the fort’s story are gone for the season, but you can still go through the fort, and take part in activities like we did, a nighttime astronomy program, and stay at its few campsites with water, electric and showers in a trailer in an open space near the headquarters. 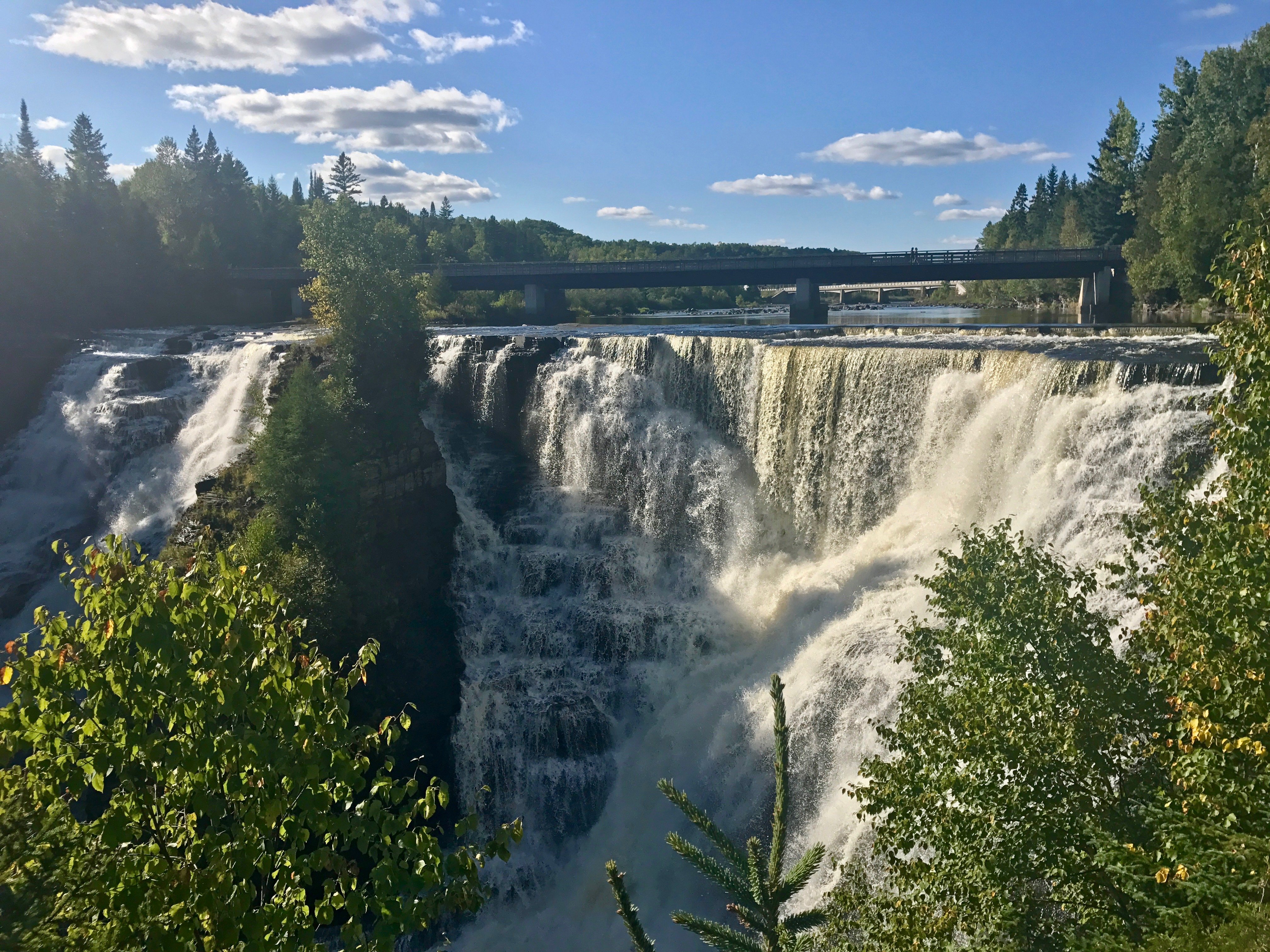 Kakabeka Falls, known as the Niagara of the North, near Old Fort William Provincial Park in Thunder Bay, Ont., also features a campground.

After we paid for our campsite, we drove west only a few miles to Kakabeka Falls Provincial Park to see what’s nicknamed the Niagara of The North. The 130-foot falls and river are also part of the historic voyageurs route that Fort William was built to serve. The rock walls here contain fossils dating to 1.6 billion years ago. You’re on the western edge of the Canadian Shield, the geological core of North America. The park also has 160 nice wooded campsites near the falls in three units. Riverside sites do not have power.

We picked staying at Fort William, however, mainly for the astronomy event presented by park interpreters the night we arrived. They’d hoped for a repeat of the Northern Lights (which were visible the night prior) but unfortunately, they didn’t re-appear. There are other events throughout the year at the fort including living history exhibits prior to Labor Day, also celebrated in Canada.

I hiked a bit in Sleeping Giant Provincial Park years ago but never camped. Our first view this time of this granite promontory of the Sibley Peninsula resembling a, well, sleeping giant, was from the Fort William Indian Nation Pow Wow Grounds high above Thunder Bay. 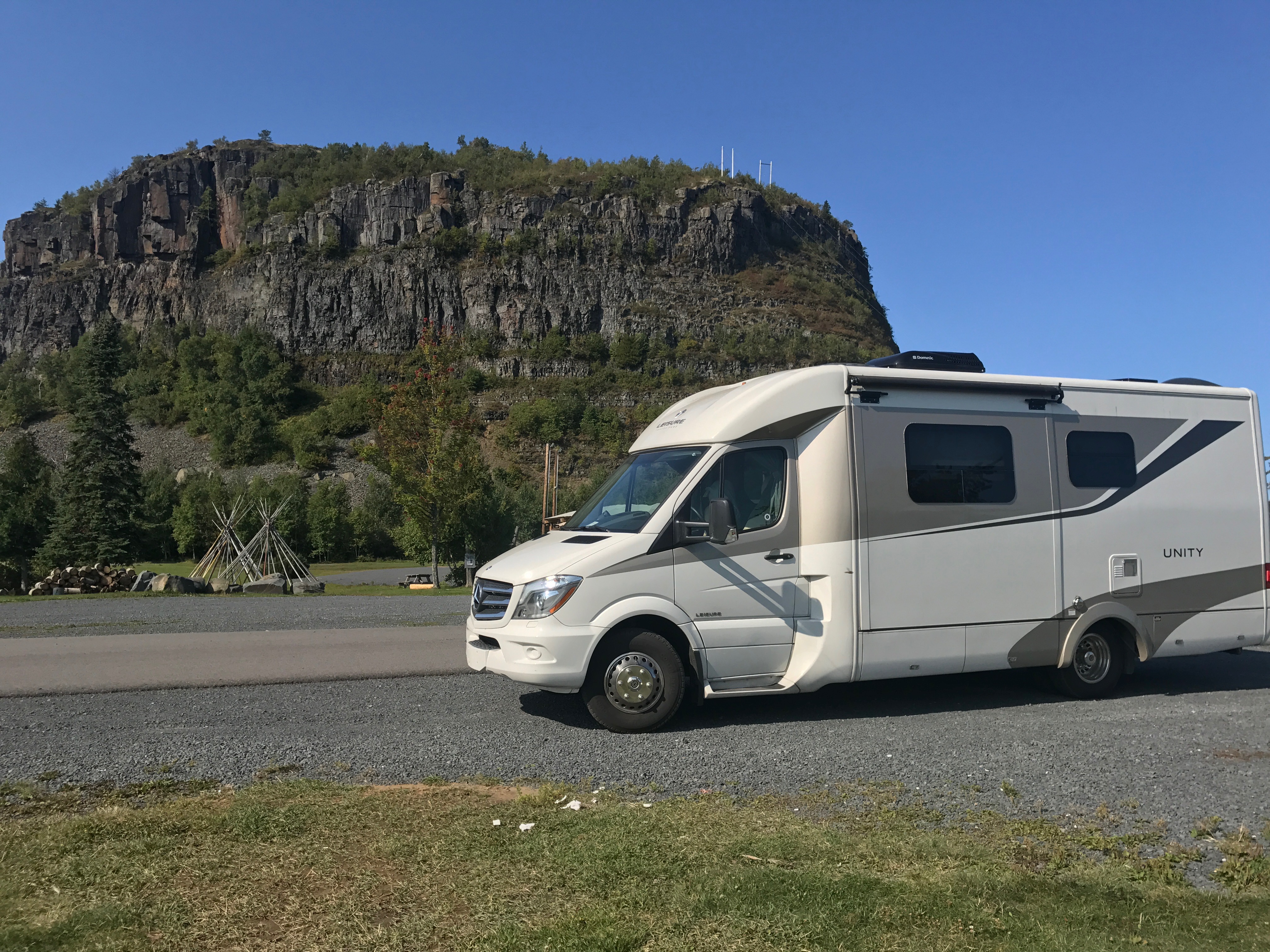 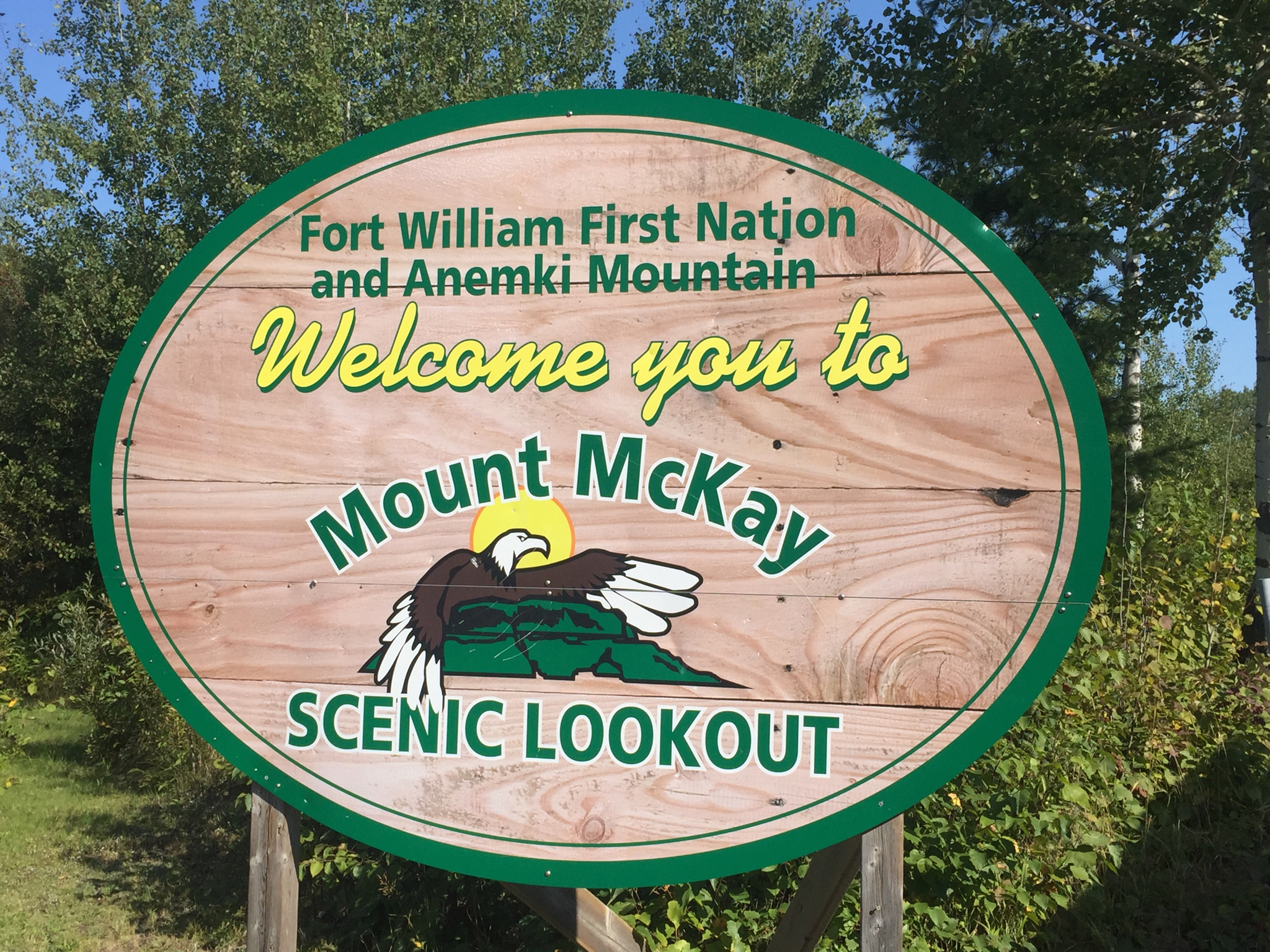 …home of an annual powwow…

We saw its clear outline again at the Highway 17 rest stop dedicated to Terry Fox, a cancer victim who was running across Canada to raise money for research, only to stop near here shortly before his death in 1981 after completing more than 3,300 miles. 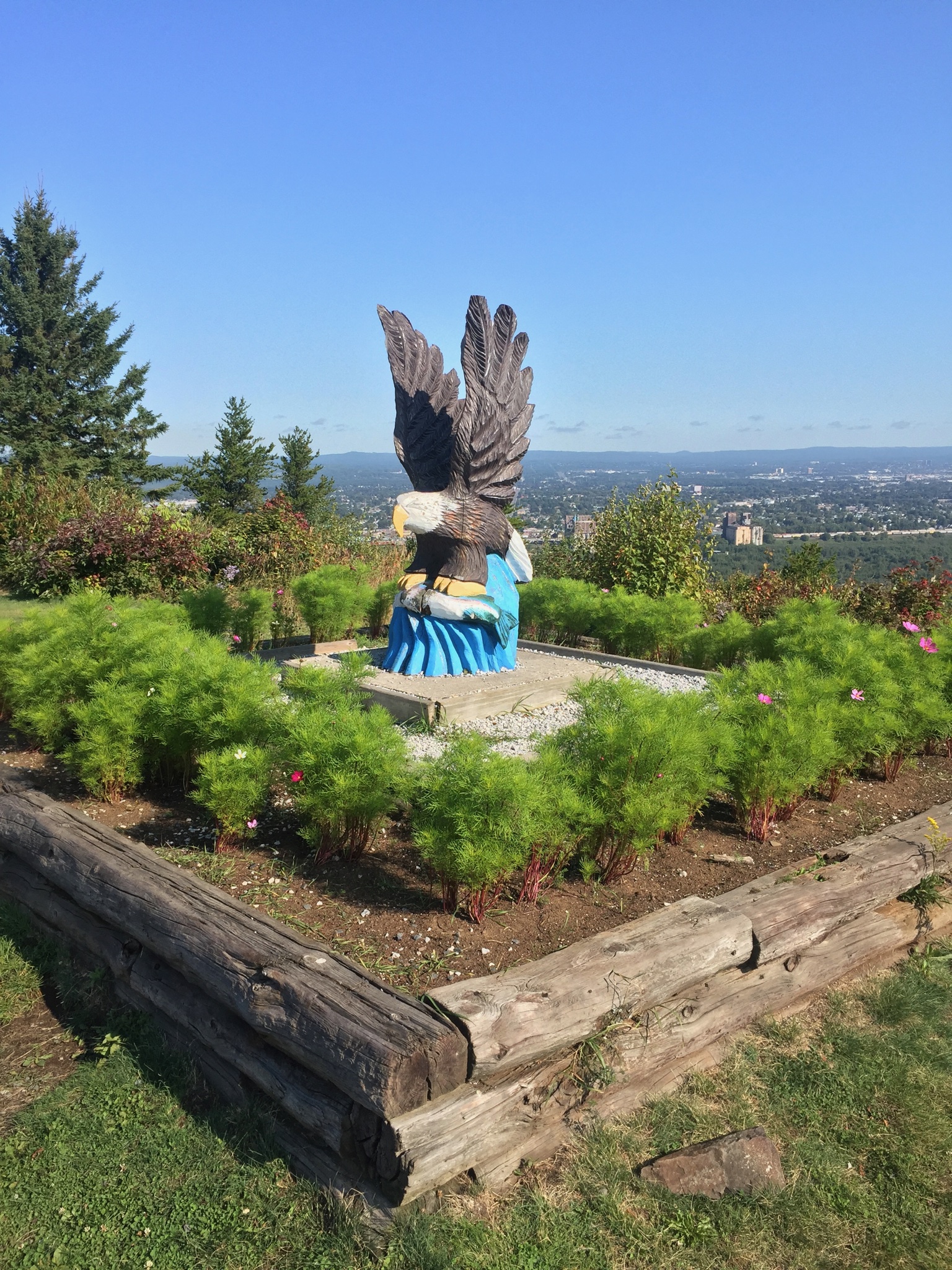 …and soaring birds, both real and carved, on the precipice overlook

Slip off Highway 17 into Sleeping Giant to stay at one of 200 campsites on Marie Louise Lake, about half with electric. There are 49 miles of hiking trails, but we drove to two spots, one at the end of the park’s only paved road to Silver Islet, site of a former famous silver mine. The next day, we headed up the 5-1/2-mile (9K) gravel road that ends atop the giant itself at the Thunder Bay Lookout. A duck skims the surface of Marie Louise Lake, with the Sleeping Giant in the distance… Hiking one of the park’s miles (or kilometers) of the trail, leading to… 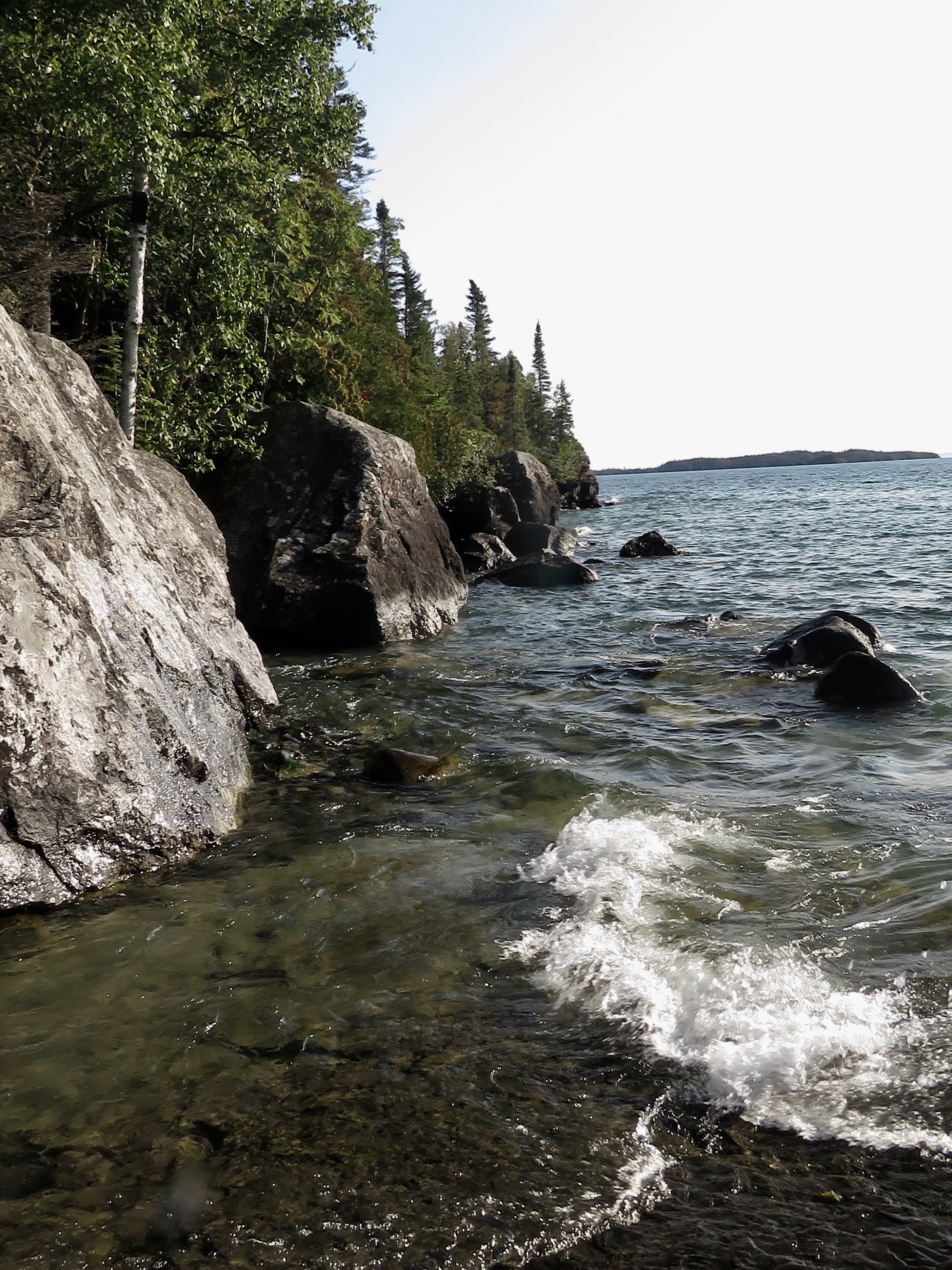 The last quarter-mile or so, you’re driving on bare rock, the base of North America, before getting to a wide section with a wooden fence on the right that only resembles a parking area. 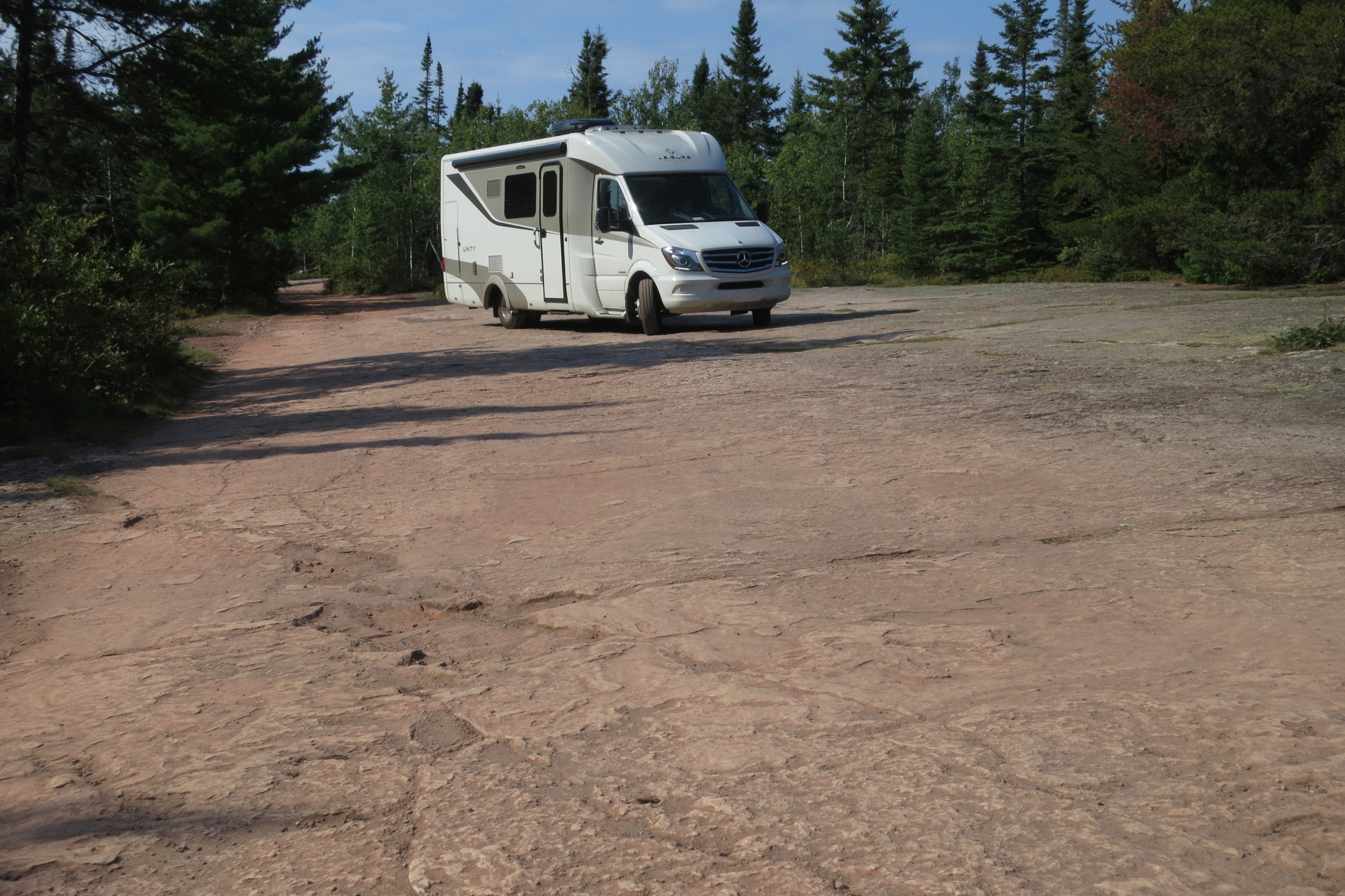 is rewarded with a stunning overlook

A path leads onto a metal platform, where you’re rewarded with a spectacular, soaring perch beyond the sides of the giant with nothing but air beneath you, as the lake waves run ashore a hundred feet of so below your feet. It’s an experience you won’t find anywhere else in the park and definitely worth the slow trip.

If you’ve brought your mountain bike, there’s also a great seven-mile (12K) bike trail in the park around Marie Louise Lake’s west side, and other hiking trails where you’ll meet back-country campers heading into 40 trailside sites.

I visited Rossport, about two hours east of the giant, once before, and it charmed me. The entire town consists of less than a dozen B&Bs and other businesses on an island-protected harbor sometimes called the Peggy’s Cove of the North. Canada’s most famous artists, the Group of Seven, drew upon the area for many of their landscapes. If you’ve brought your kayaks, this is a great, protected area to explore the shoreline at this 18th century voyageur stop and former fishing village. Or, rent from Superior Outfitters and take a guided float, or see it aboard a fishing charter or an island tour boat here. Serendipity Gardens restaurant, in Rossport a great spot for dinner only a few minutes from Rainbow Falls Provincial Park. We treated ourselves to my birthday dinner at Serendipity Gardens on a hill looking over the harbor, a great spot for two reasons. It features both indoor and garden dining, and it was just down the road from our campsite at Rainbow Falls Provincial Park. You’ve got a choice of two separate campgrounds there, and we chose the Rossport unit because it again is on Lake Superior. Electric is available at 23 of 36 sites. Before dinner, we arrived in time to grab a site across from the water and explored the park’s beach and rock outcroppings, and it’s falls too, a few miles east on Hwy. 17. Park information advises it is a strenuous walk down a wooden staircase along the falls, but it wasn’t hard for us and led to great views of the cataract, the river chasm and a bit of Whitesand Lake. We turned around at the bridge over the Whitesand River, a brook trout stream, instead of continuing to another Lake Superior overlook.

We could have extended our trip a few days to stay at Pukaskwa National Park, or 600-square-mile (1,550 sq. kilometer) Lake Superior Provincial Park, where you can walk along a rocky trail while hanging onto a cable next to the lake to view ancient pictographs at Agawa Rock that can be seen only when Superior is calm. But instead we just stopped for a look there and drove Highway 17 as it wends its way through the glacier-carved valleys and rock-topped hills to Pancake Bay Provincial Park, on picturesque Batchawana Bay.

We arrived in late afternoon, chose a non-electrified beach view site—there are multiple cost point sites here, depending on campsite location and services, including “preferred,” on the lake with electricity; expect to see this at more U.S. parks in the future—we headed across the camp road with our chairs and dipped our toes first into the warm sandy beach, then the lake, to enjoy the day’s last rays. Our campsite at Pancake Bay… Steps away from the beach… 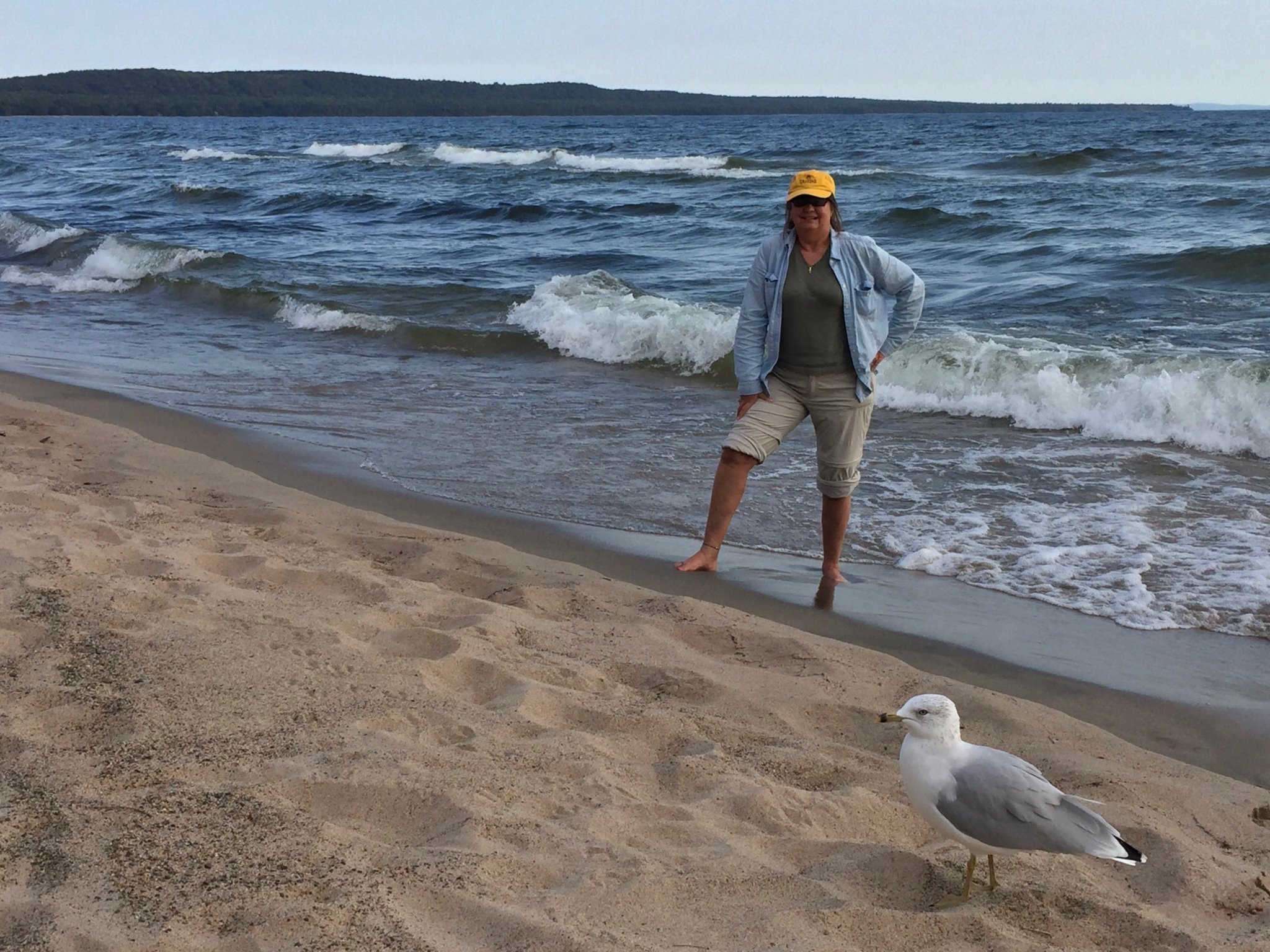 …where Denise dips toes into Superior

From here, you can just make out the U.S. shoreline in Michigan. Peer across the lake from here, where about 17 or so miles into Superior, also lies the ore freighter Edmund Fitzgerald, which went down in a November storm with all hands in 1975. There’s also a trail to a lake lookout here.

When we left the next day, we were only 60 or so miles from Sault Ste Marie, Ont., on the banks of the St. Mary’s River and Soo Locks, the world’s busiest lock system.

You can take a guided trip into the rapids from the Canadian side after what some term North America’s best and most publicly accessible Atlantic salmon fly fishing if the water levels allow. Or head across the International Bridge to historic Soo, Michigan, from where, among other things, sprang the inspiration for Longfellow’s epic poem, Song of Hiawatha. On this side of the river, take a boat tour through both Canadian and American locks, see ships entering and leaving up close from the U.S. side, or visit a retired Great Lakes freighter, and have a great dinner at spots like The Antlers in town. Just don’t judge it by its “up north bar” exterior. Try the dessert poutine, a different take on that French-Canadian national side dish. Our trip’s beginning, and end, at the Mackinac Bridge in St. Ignace, Michigan.

From here, you can head west a bit to towns like Brimley, with its state park and casino campgrounds, or farther west. Or, turn south, like we did, on I-75. That’s one of the best parts of this tour. There are so many choices, you can do it again to see what you missed on your first visit. Ready to go back with us?

Canadian provincial parks do not take reservations after Labor (spelled Labour in Canada) Day, so get to your chosen park earlier in the day, then sightsee. Most parks provide water taps to fill fresh water tanks, as most do not have on-site water. The Lake Superior Circle Tour Guide presents a good overview of trip highlights, but is not a complete, “turn here, go there” guidebook. Consult the Internet version for various points of interest as well. We found a day-by-day itinerary we prepared a good guide.

Canada prices are higher, but as of this writing, the U.S. funds exchange rate is still a favorable 25 percent. There was no problem finding non-biofuel diesel anywhere. Don’t forget your passport/proper ID, as well as any pet vaccine records as needed. See any other restrictions on U.S. and Canadian Customs websites.