Birds for a Snowbird.

It’s a mid January, 2013 morning, a degree or two below freezing, and we are headed south on the Alaska Highway. We’re going hunting for birds. Just leaving our home in Whitehorse, Yukon, my wife, Joyce, myself and two dachshunds, are in our 2012 Serenity Leisure Travel Van, taking advantage of the warm-weather window to make a dash for sunny Arizona. 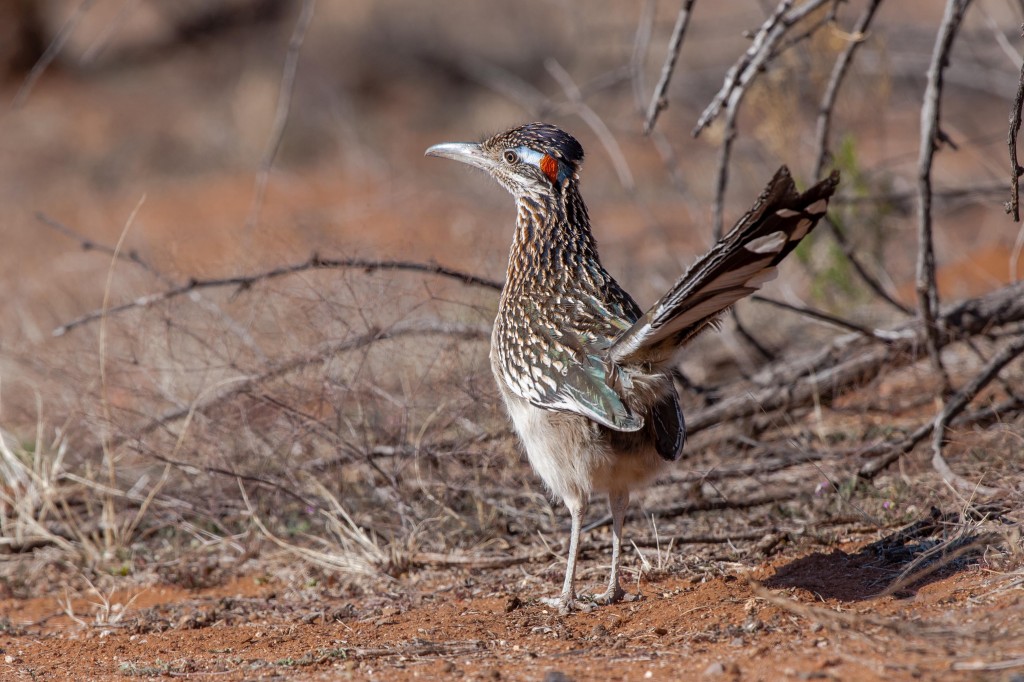 I am a retired photographer and now take pictures mostly for my own pleasure. Bird watching is the number one sport in North America. I am not a true “birder” but a photographer who enjoys taking pictures of birds. I take the photo of the bird then check its ID in my bird book. Bird watchers seem to do it the other way around.

We have made this trip 6 times before to avoid winter months. I guess this makes us “snowbirds”. Most of these trips were in a truck and camper, and last year, on the winter shake-down cruise for our RV, it had been a chilly 30 degrees colder. This year we want to make miles before any change in the weather. The pavement is sanded on curves and hills, and we have a pleasant first-day run to Liard Hot Springs.

The Serenity is toasty warm.

Liard is a beautiful natural hot spring with swimming winter and summer. The campground is snowed in so we choose to spend the night with the semis in the rest stop just across the road. The pull-out has out houses. We don’t water-up until further south, when temperatures get high enough to prevent frozen water lines. We have dinner, throw an extra comforter on the bed, turn off the furnace and doze off to the purr of the idling trucks. They come and go all night. 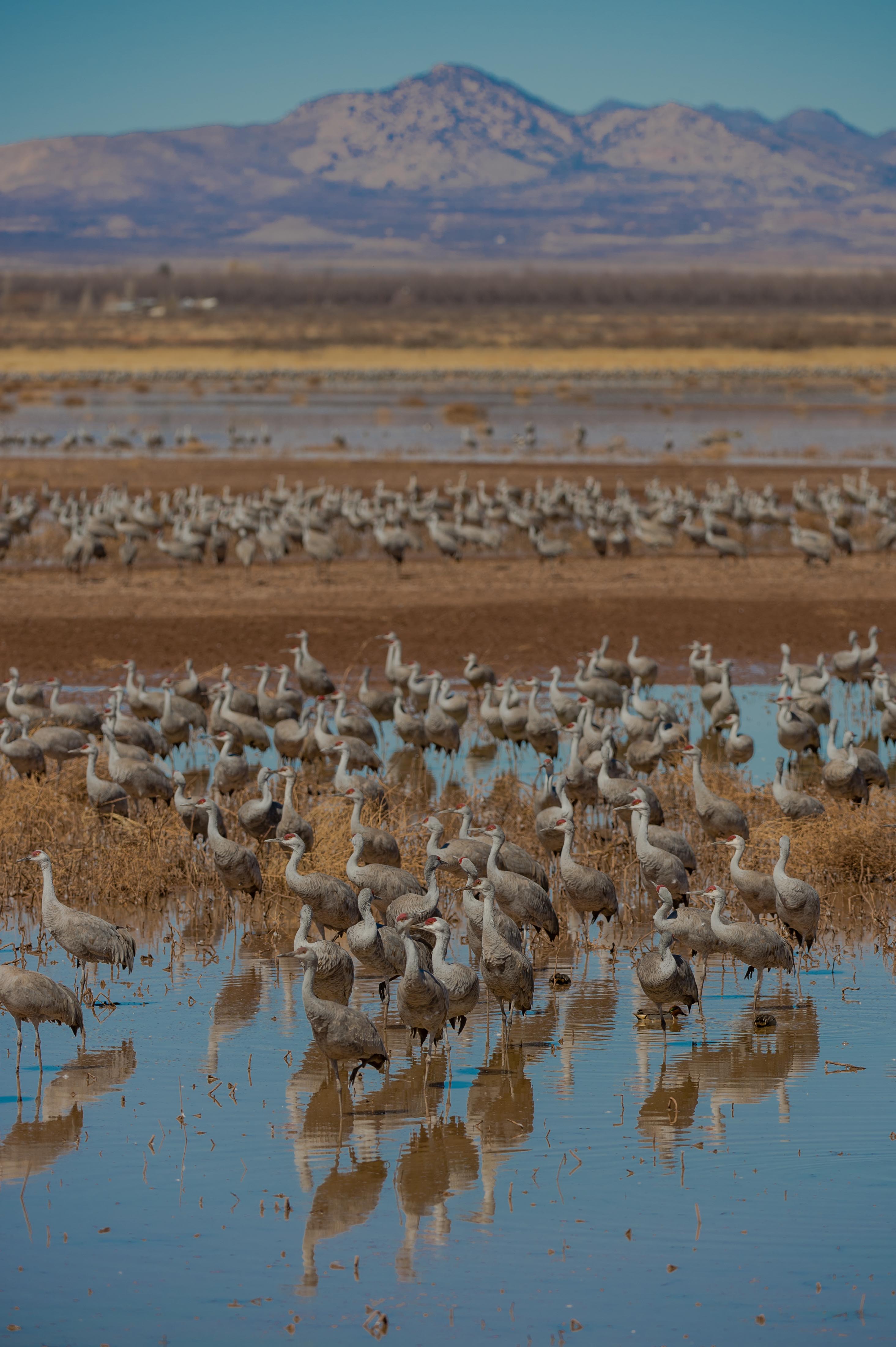 Morning arrives. It is even warmer (about +13C) and is pouring rain. The highway has been amply sanded and after an hour and a half we arrive at Toad River Lodge. We top up our fuel (always a good idea traveling in winter). Although diesel is expensive on “The Highway”, I almost enjoy fueling up as the Serenity is getting close to double the mileage of the truck and camper. At the lodge we are told that the sanding truck has broken down, the highway is icy to the south with trucks in the ditch, and it is recommended that we don’t go any further that day.

“Just find a spot to park out back, no charge, and spend the night.”

We drink lots of coffee, read everything in the camper, eat a nice dinner in the lodge, and make the bed. The motor home is mud from front to back and it is raining even harder.

Morning brings a different day. The torrent that came down all night has stopped and our home has been washed sparkling clean. We have breakfast in the lodge and by 10 a.m. trucks are getting through from the south. The sander has done its job. Truckers tell us the highway is now good all the way to Dawson Creek, but a storm has come in behind us. There is a foot of snow on the road to Whitehorse and at least one truck is on its side in the ditch. Good thing we are headed south!

The trip is uneventful down through British Columbia’s Okanagan Valley and we cross into the USA at Osoyoos. In winter it usually takes us about 24 hours of actual driving time from Whitehorse to the border. We spread it over several short days. We head south through Omak on Highway 97, through Moses Lake to Pendleton (Walmart parking lot) and then cut east on Highway 94 to Ontario. We travel on down into Winnemucca, Nevada, where we hit the coldest temperatures of the 2013 trip; -17C when we leave in the morning and -22C only half an hour later. Down Highway 95 through Fallon (use the car wash) , Tonopah, and on to a little RV park just north of Beatty. Temperatures are now up to +10 C. We water up, spend a warm night, and go west into Death Valley. Temperatures climb by at least 15C more and we take a week to photograph the sand dunes and warm up.

On to Quartzsite where there are thousands of RVers camping in the desert visiting the huge annual rock and rv show. This little town of a few hundred swells to upwards of a million and the show is advertised as the largest gathering of RVs and RVers on earth.

We overnight then move on to Yuma, AZ, spending a few weeks relaxing with friends and relatives. Yuma is my first real opportunity to do some bird photography. I have spent hours in the Hummingbird Park along the river that separates Arizona and California and more hours with the Long-billed Curlews as they feed near the Sunny Sands RV Park on their northern migration.

On east to Organ Pipe National Monument. We never miss a chance for a date shake at Dateland. It sounds like a strange drink but is absolutely delicious. 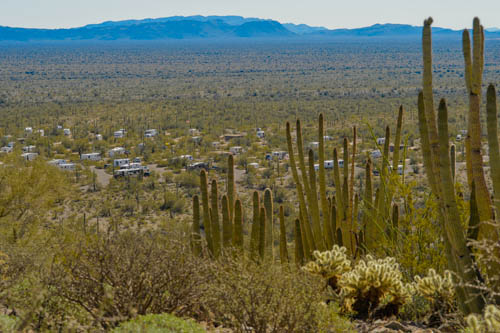 At Gila Bend, before heading south to the park. You might run into a fellow that will tell you “H—-No! Don’t go down there! The Mexicans will shoot you or the military will bomb you (the Barry Goldwater Bombing Range is in the area).” This is what he told us on our first trip and I have met several others who have heard the same story. I don’t know what his problem is or if he owns an RV park in the area, but disregard everything he says.

We go anyway and feel safe doing it. Thousands spend weeks every year, camping among the cactus in the area, some on the public BLM lands in the desert, some in private RV parks in small towns along the route, and many, like us, go straight to Organ Pipe National Monument.

Organ Pipe is one of our favourite spots. The rustic campground is full of birds, cactus, and (when the weather and rainfall is right) flowers. It has lovely trails and I have spent hours and hiked miles searching for Cactus Wrens, Gila Woodpeckers, and Sage Thrashers. In February these birds are in their early nest-building stage and are quite easy to approach. 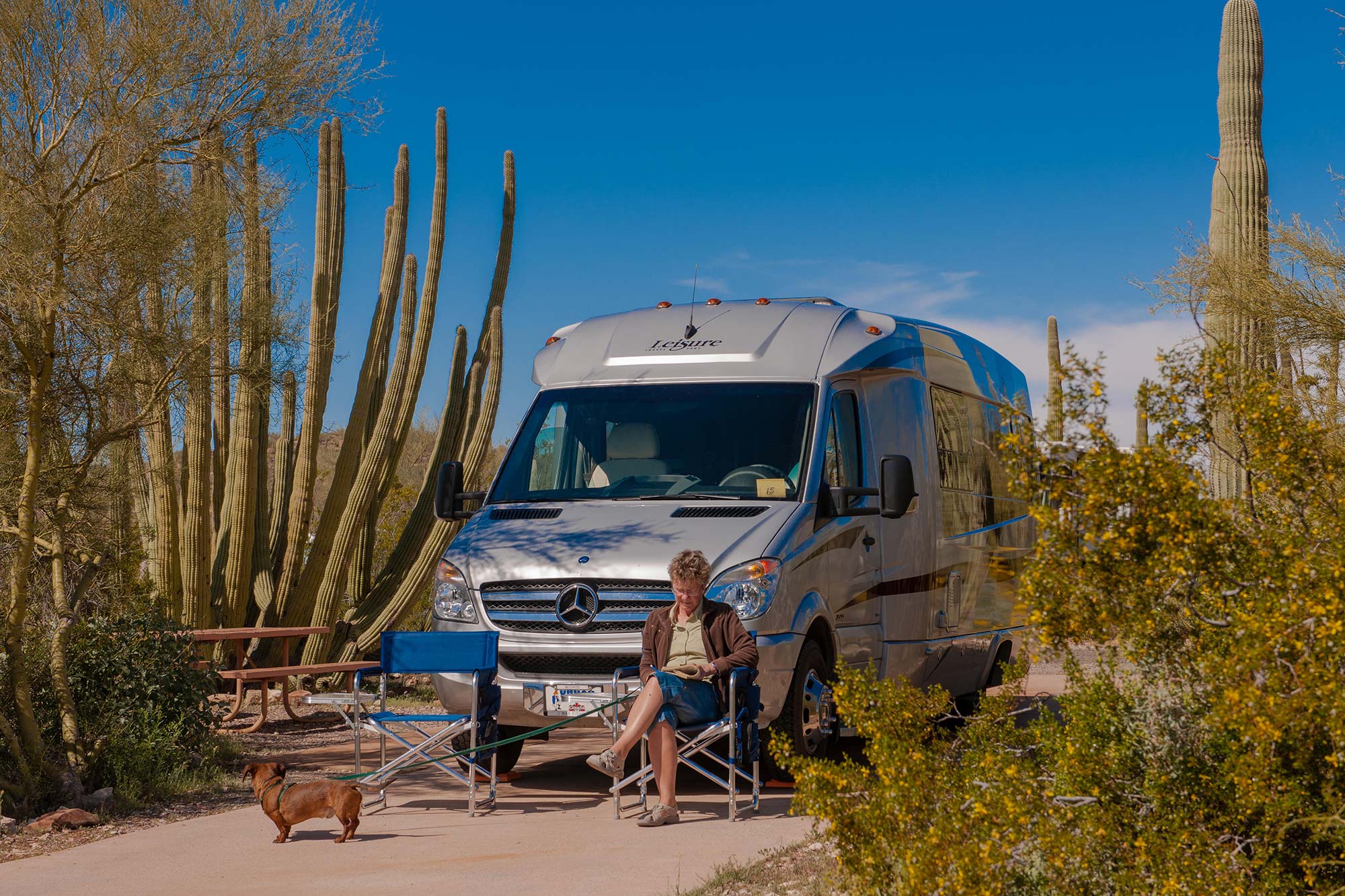 One thing that many desert parks don’t promote is the fact that Pack Rats like to build nests on, and chew the wiring of, RV motors. It helps to keep the hood up at night. We were having a glass of wine with friends about 10 pm when we heard a noise. I opened the hood to find one of the rats chewing on the firewall of my brand-new Serenity. Apparently the wall is soy based and the rodents think it is a great late night snack. Rats like dark places so even starlight helps keep them away if the hood is open at night.

Southern Arizona is full of bird-watching areas and bird-watchers. Some of our other favorites are Dead Horse Ranch State Park (where I shot hundreds of photos of Great Blue Herons and other water birds, as well as hundreds more of Roadrunners), Lost Dutchman State Park (where I have spent a good deal of time with Cardinals, Pyrrhuloxia, and the Vermillion Flycatcher), Cave Creek (for Acorn Woodpeckers) and Whitewater Draw, near Tombstone, where thousands of Sandhill Crane and other water birds stage before heading north. We also usually spend couple of weeks at Lost Dutchman each trip. It is also a great park for scenics when the Mexican Poppies are in bloom. 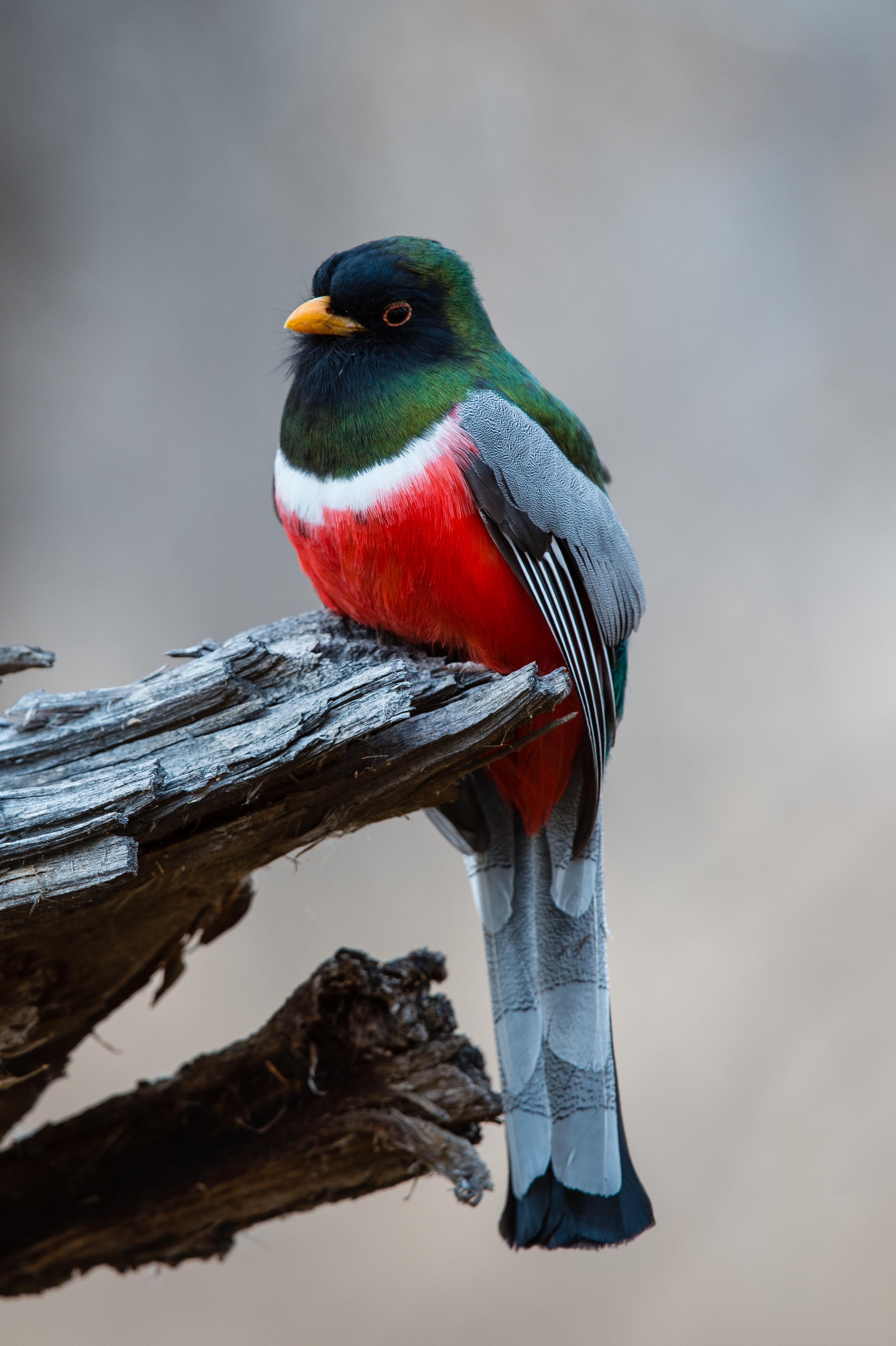 The single bird I have had the most fun with is the Elegant Trogon at Patagonia State Park. This parrot-like bird lives primarily in Mexico and points further south. I am told there are fewer than six individual birds in the United States, but I have managed to find and photograph this one on six different trips. In 2013 I got great shots of him again, before we were forced out of the park by a late blizzard. We pushed more snow between Patagonia and Tucson than we did down the Alaska Highway.

The male Elegant Trogon is a gorgeous specimen with reds and greens and I love to get new photos each time I find him. I keep hearing there may also be a female in the park. She has more drab colouring, but beautiful as well. It would be great to have a picture of both.

Maybe next year.
By Wayne Towriss