A Superior Adventure, Part I

It’s been sung about, and wept over, from the time the Ojibwa were its only sailors to the present. It’s immortalized in poems as the world’s largest sweet sea. It’s sent sailors into rapture at her beauty, and unimaginable terror only hours later, and some even to their deaths aboard the 6,000 ships that lie beneath the waves of this, the world’s largest lake, Lake Superior.

While the lake may be treacherous at times, a trip around it on land is one of the easiest, most beautiful and varied drives you’ll ever point your LTV towards, on The Lake Superior Circle Tour. On Labor Day weekend, 2017 we turned our 2015.5 Unity MB north from our base near Roscommon, Michigan, to see what we could see along this lake that’s so big, at 350 miles long and 160 wide, some say should be re-classified as a freshwater sea.

It was a 1,100-mile, 10-day adventure taking us to national parks on both sides, and on hikes along rocky shorelines still strewn in spots with the wooden skeletons of century-old shipwrecks in Michigan’s Upper Peninsula (U.P.). It took us down paths to lighthouse beaches so deep with wave-smoothed pebbles we sank ankle-deep in them, to rivers that in spring and fall see spawning trout and salmon, and too out-of-the-way campsites feet from the beach near brook trout streams. 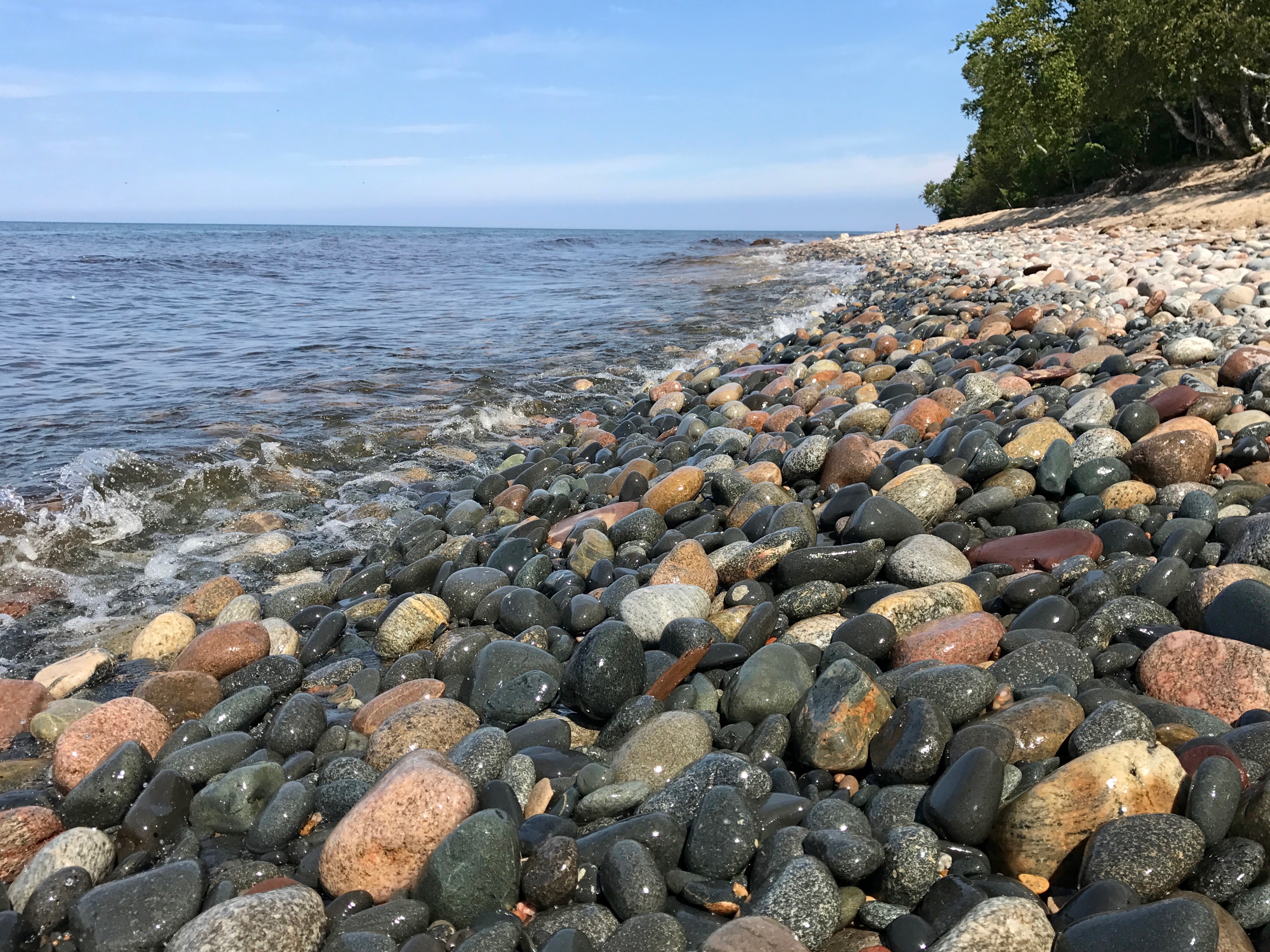 We spent hours stargazing at another campground at the western end minutes from the lake’s largest Canadian port, and drove atop the shoulders of a giant, then gazed into the water from a charming restaurant in a former fishing village.

Our trip took us along Canada’s coast-to-coast Trans-Canada Highway and waterfall parks, with almost always, Lake Superior as our companion out our right side.

One doesn’t need to begin circling Superior anywhere because there is no official beginning. You just need to start, and September is a great time to do it. Campsites are more available at Ontario provincial parks before they close in October, as are their stateside counterparts. And the weather is usually still good.

Now, because this is such a big trip, we’re breaking it into two parts: The U.S. side, then the Canadian side. Here’s the first.

We headed across the Mackinac Bridge about two hours north of Roscommon and turned our Unity’s tires onto the back of U.S. 2 before grabbing the next-to-last site at the U.S. Forest Service Brevort Lake Campground, which juts into that big lake, prime water for walleye, bass and panfish.

We’d hoped to get on Lake at another forest service campground just to the west, but it had filled. It was still Labor Day weekend, remember. Next time.

It was a short drive the next day, past historic general stores like that at Hog Island, where we bought this trip’s first tastes of two U.P. food traditions, smoked whitefish and beef pasties (more on those later), and the beautiful Lake Michigan beachfront arcing along U.S. 2 heading west. 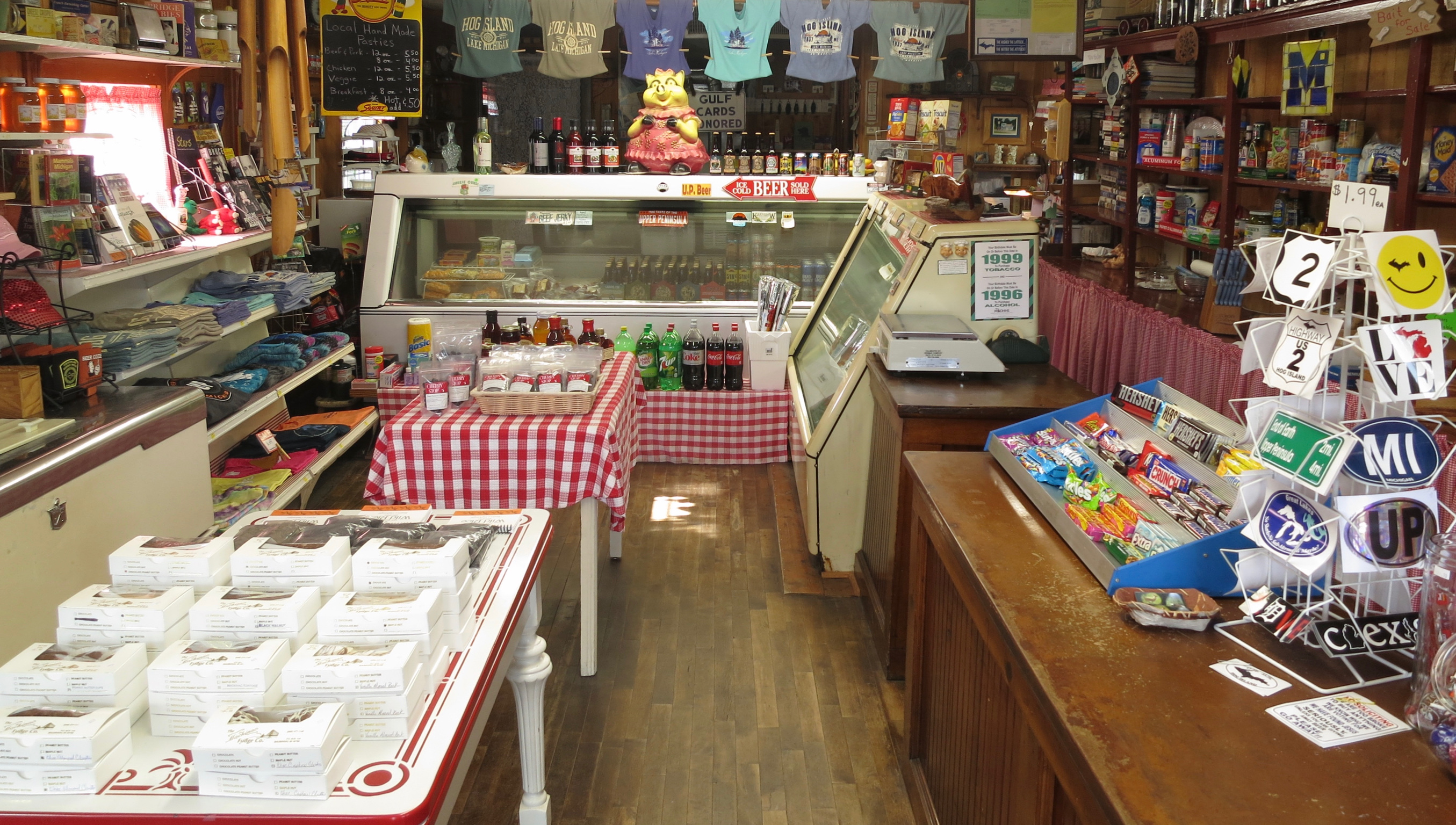 Find pasties, souvenirs, and more, including… 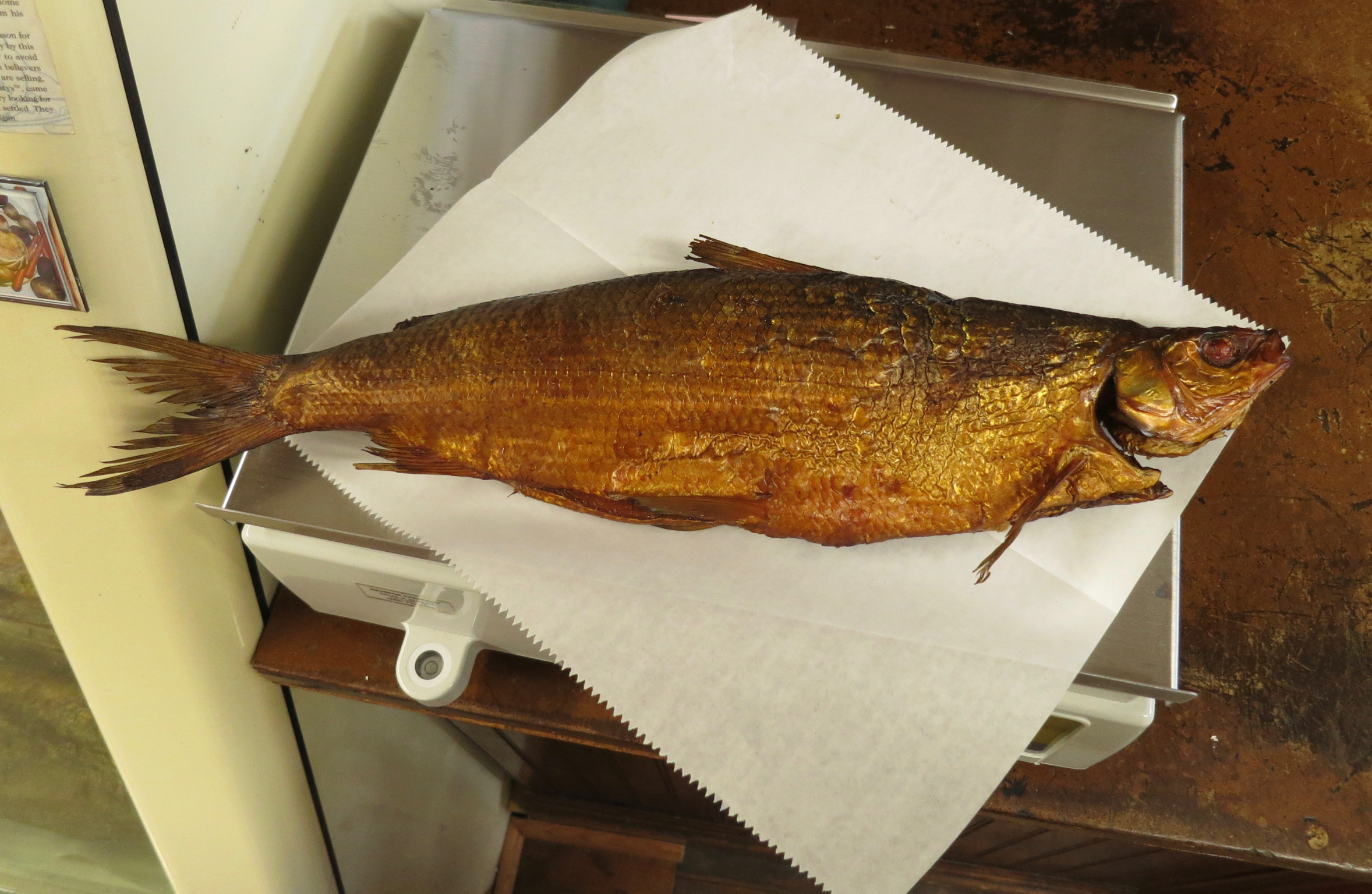 We then turned north on M-77 (the “M” designates a state highway) for a brief stop at the Seney National Wildlife Refuge, one of the largest east of the Mississippi, created by the Depression-era CCC. A great visitor center introduces you to the importance of this and other national refuges for migratory and other birds, which fill with ducks, raptors, and others each spring and fall. Some 211 species have been seen here. If you have a tow a car, drive the seven-mile scenic route, or park your Leisure and hop aboard a small tour bus to ride along past eagle nests, ponds of migrating waterfowl, and other critters.

Now, drive toward your first encounter with Superior at Grand Marais, the eastern gateway to the Pictured Rocks, America’s first national lakeshore. The town is replete with a brewpub, small store, and great lighthouse harbor views.

From there, turn west to enter the lakeshore. Tip: Head in early, especially in summer. All three of the lakeshore’s drive-in campgrounds are first-come, first, serve.

If you miss out, there are Michigan State Forest campgrounds nearby as well as a couple of private campgrounds. The night prior, you may even want to stage between the once-notorious lumber town of Seney and Grand Marais at the East Branch of the Fox River state forest campground, 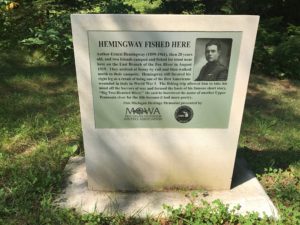 where on a trip after returning from World War I, a young Ernest Hemingway stayed and drew inspiration for one of his most famous short stories, Big Two-Hearted River. And, uh, if you find a red Contigo water bottle there….uh well, let’s just say, please contact Denise. 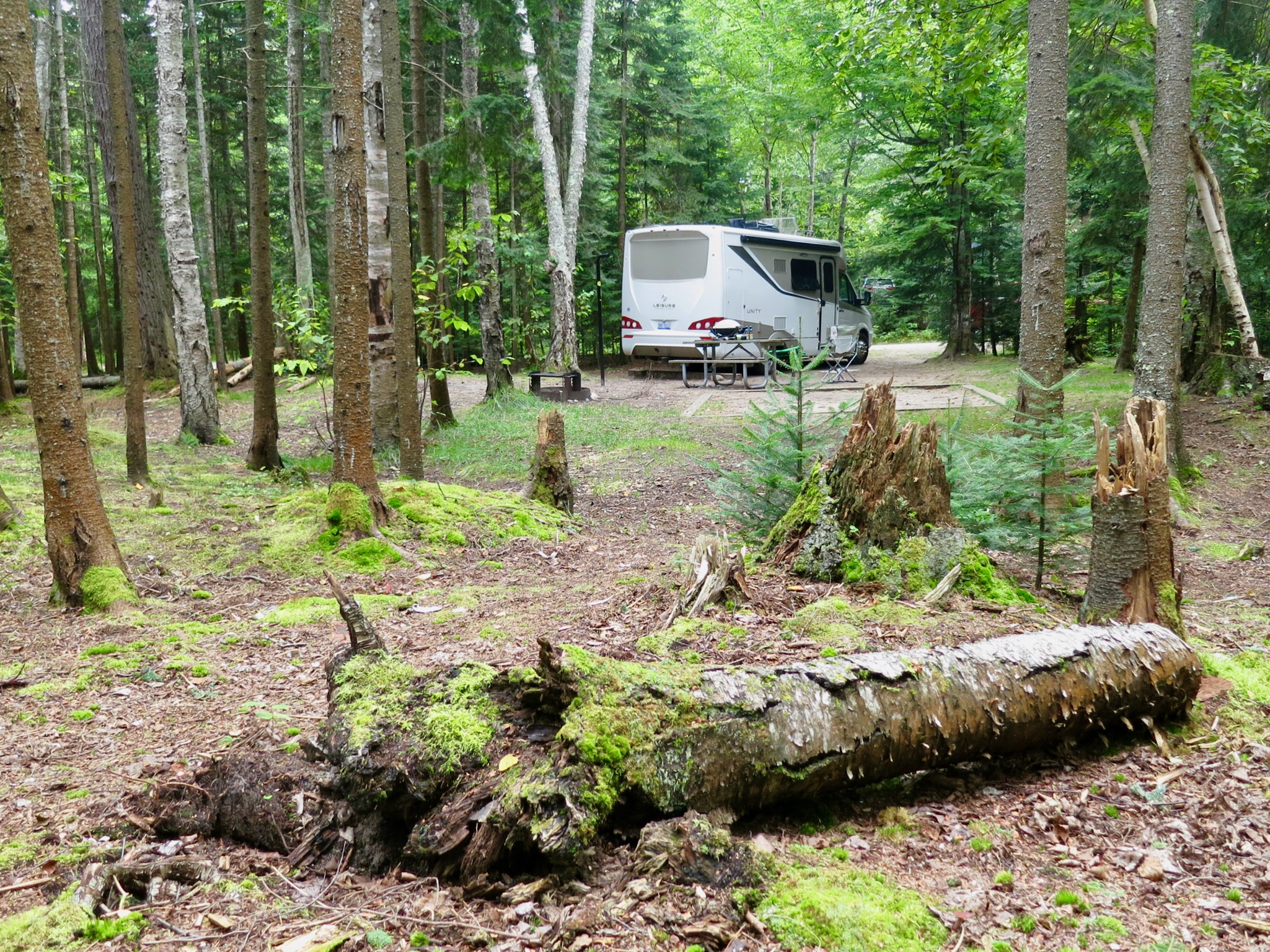 If you’ve planned right, you’ll arrive like we did and can choose a site at Hurricane River, or a bit west at Twelve Mile Beach campgrounds. 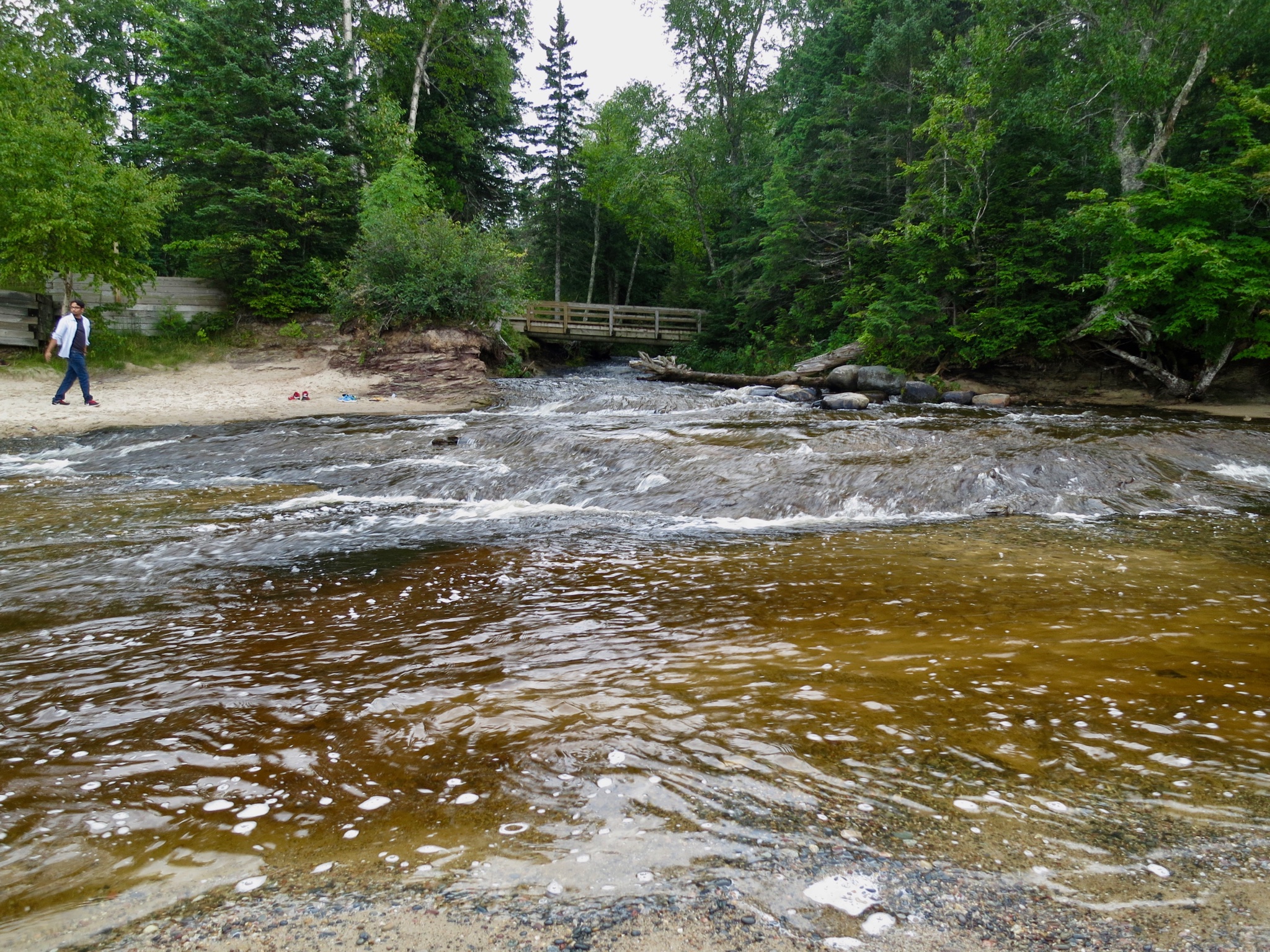 Hurricane River mouth a short walk from our campsite.

Hurricane has two units, one on the lakefront and the other, “upper” campground, in the treed ridge above. From our “lower” site, we strolled the beach, wading with others in the Hurricane as it gurgled into Lake Superior in the late afternoon light.Come here later in fall and you may see spawning salmon or “coaster” brook trout at the mouth. 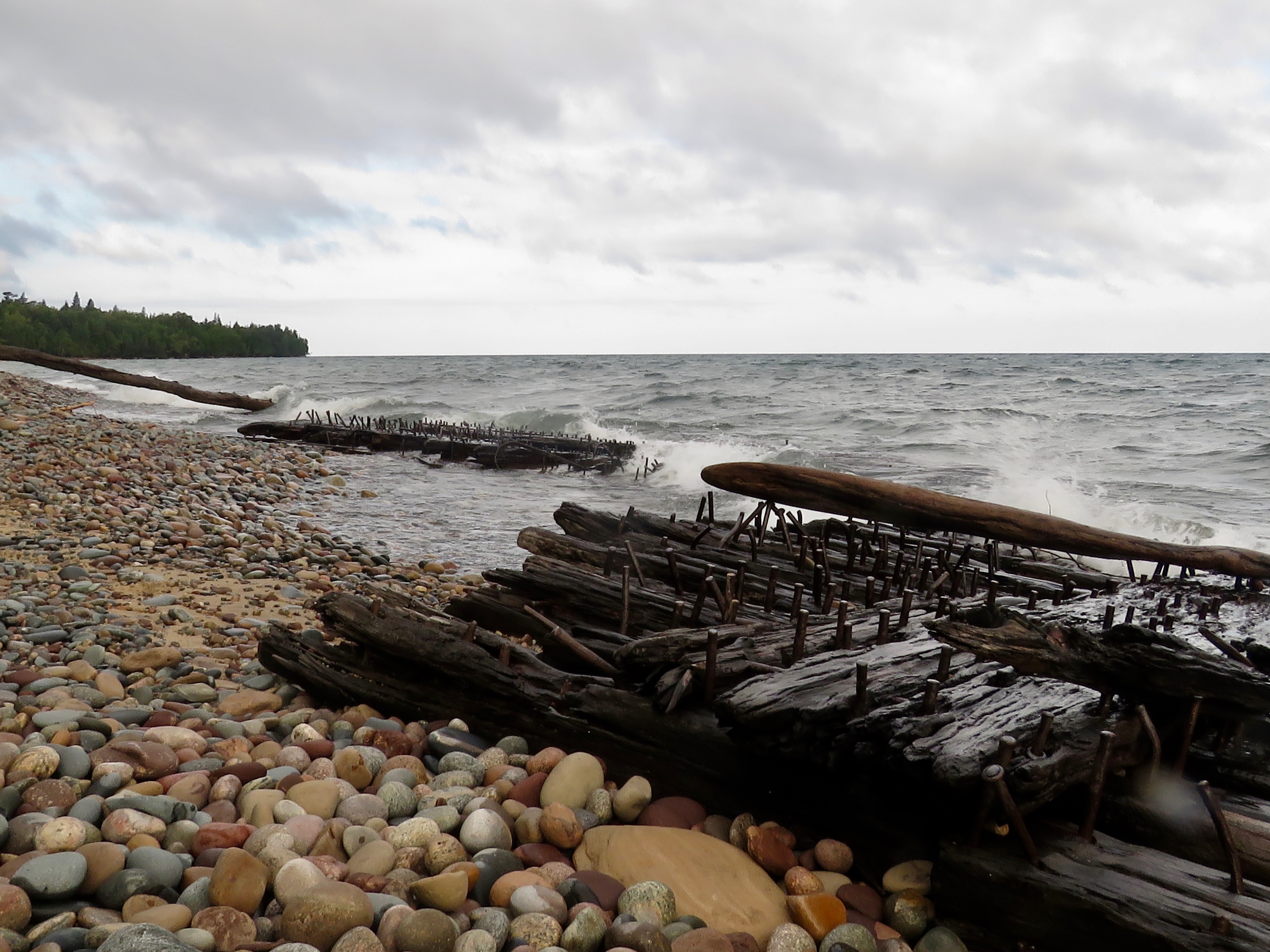 Skeletons of the Superior shipwreck below Au Sable Light, right.

The next morning, we hiked the shoreline trail, which also is part of the 4,600-mile North Country Trail, to the Au Sable Light. 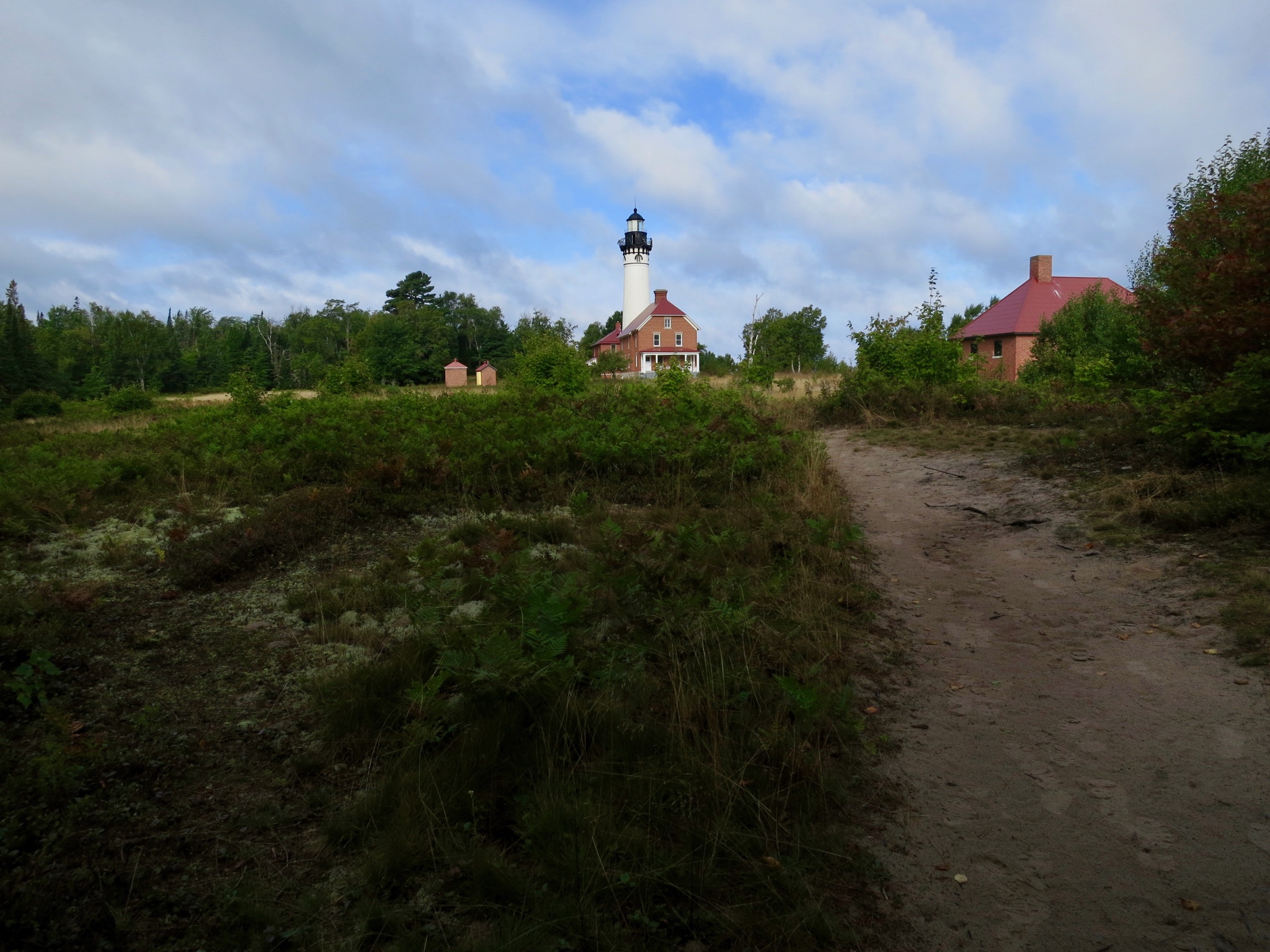 Don’t miss following the small signs directing you on detours to the rocky beach below, where remnants of wooden ships wrecked here during storms still litter the shore. The lighthouse area also has great views of the Grand Sable Dunes, five square miles of sand bluff diving into Lake Superior to the east. A great sight in the morning light. 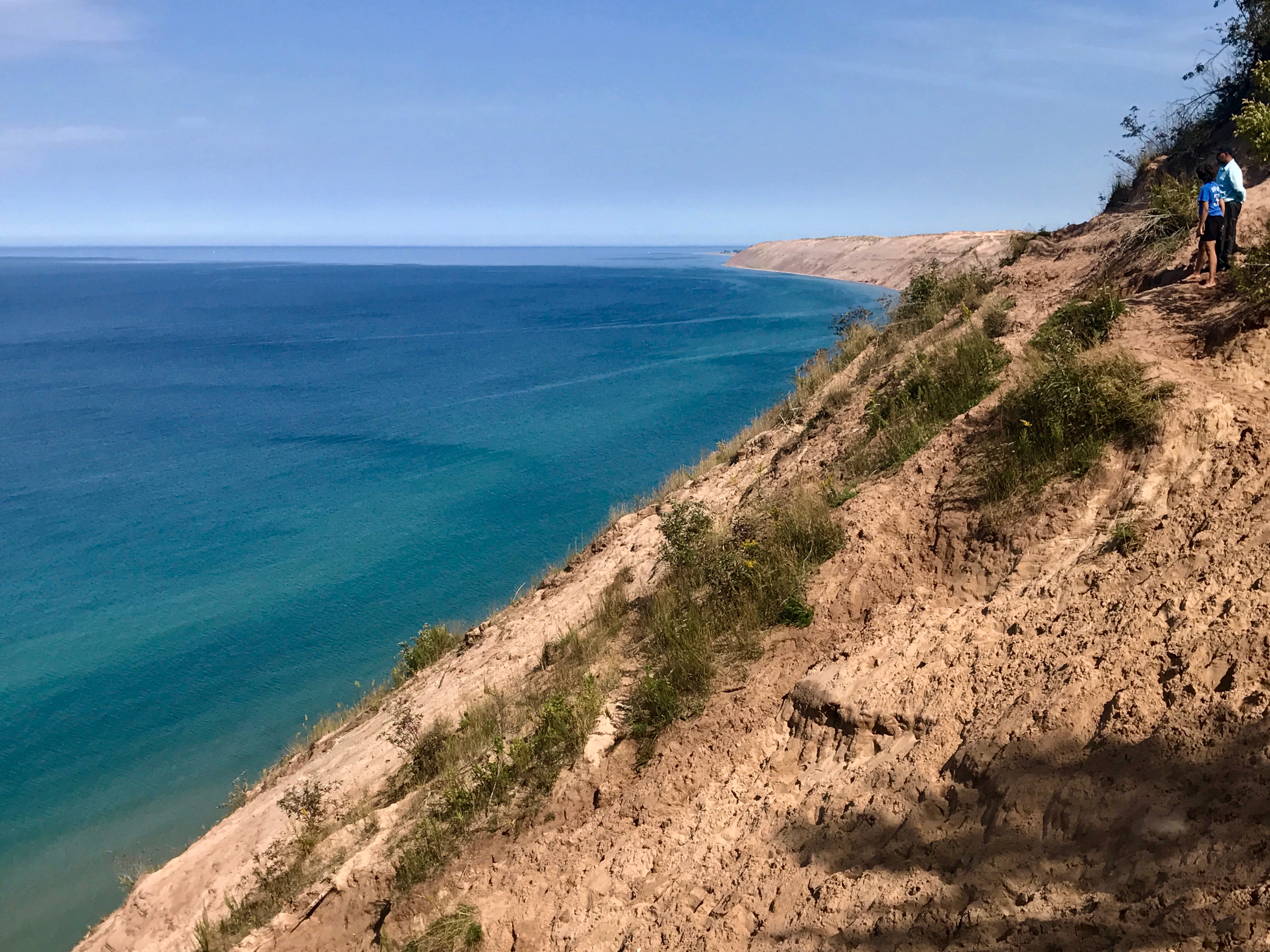 Because of the day prior we knew we needed that campsite, we then backtracked a few miles to Grand Sable Dunes overlook that we had passed by the day before, a sweeping vista of sand to the east, and the lighthouse we’d just visited, to the west. If you’re up to it, make the steep walk to the water’s edge, but prepare for a climb-two-feet-and-slide-one effort coming back up. 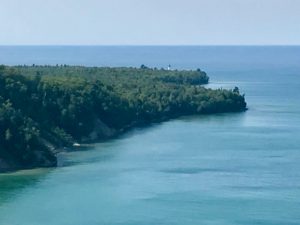 You’ve now got a choice when coming from the park into Munising, about 15 miles west. Camp at the Munising Tourist Park on the lake, and the next day board the Pictured Rocks Cruises for two-hour close-up views of these multi-colored sandstone cliffs, pillars and arched formations formed by water, wind and time that are the reason it became a national lakeshore. They leave daily mid-May through mid-October. Or, drive to the most accessible spot, Miner’s Castle overlook, and then head west like we did, through Marquette, the U.P’s largest city. 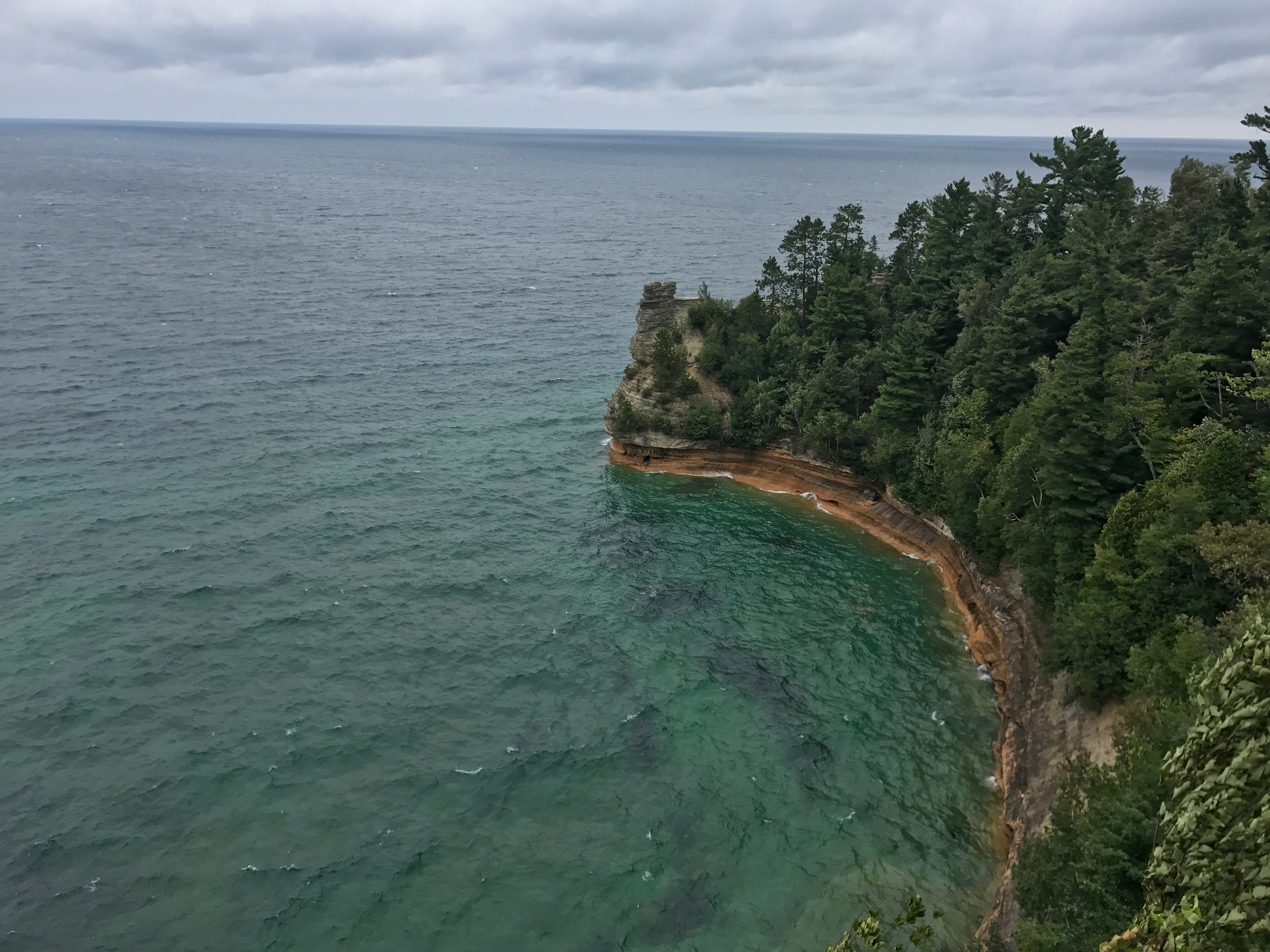 Regardless, somewhere along the way, you’ll have to try that Yooper national dish, the pasty. Brought to the peninsula by Cornish miners, it’s a crusted meat pie with a root vegetable combo, but always traditionally including rutabaga. Some of the best are made in the Marquette area, and two to try to include Lawry’s and Jean Kay’s. The other North Country delicacy is smoked whitefish, and Thill’s Fish comes highly recommended by locals we know.

We could have headed from there into the historic Keweenaw Peninsula, which we’d visited many times before, and its national historical park to stay along the lake at F. J. McClain State Park. But chose to head farther west to overnight at Porcupine Mountains Wilderness State Park, west of Ontonagon, delaying long enough to stop at the Sturgeon River Canyon Falls and gorge, one of nearly 300 falls in the U.P.

Another gem on Superior,“The Porkies,” Michigan’s largest state park at 58,000 acres, offers three park campgrounds two of them rustic. Union Bay, at the park’s east end, with electricity, flush toilets a dump station and showers on Superior, was our choice. Most sites are in partial shade, with some butting against the rocky shore. Our visit began after a thunderstorm, then a calm moonlit night, followed by a glimpse of what Superior can whip into in a matter of hours, a full-blown gale. Moonrise over calm Superior, followed the next morning…. 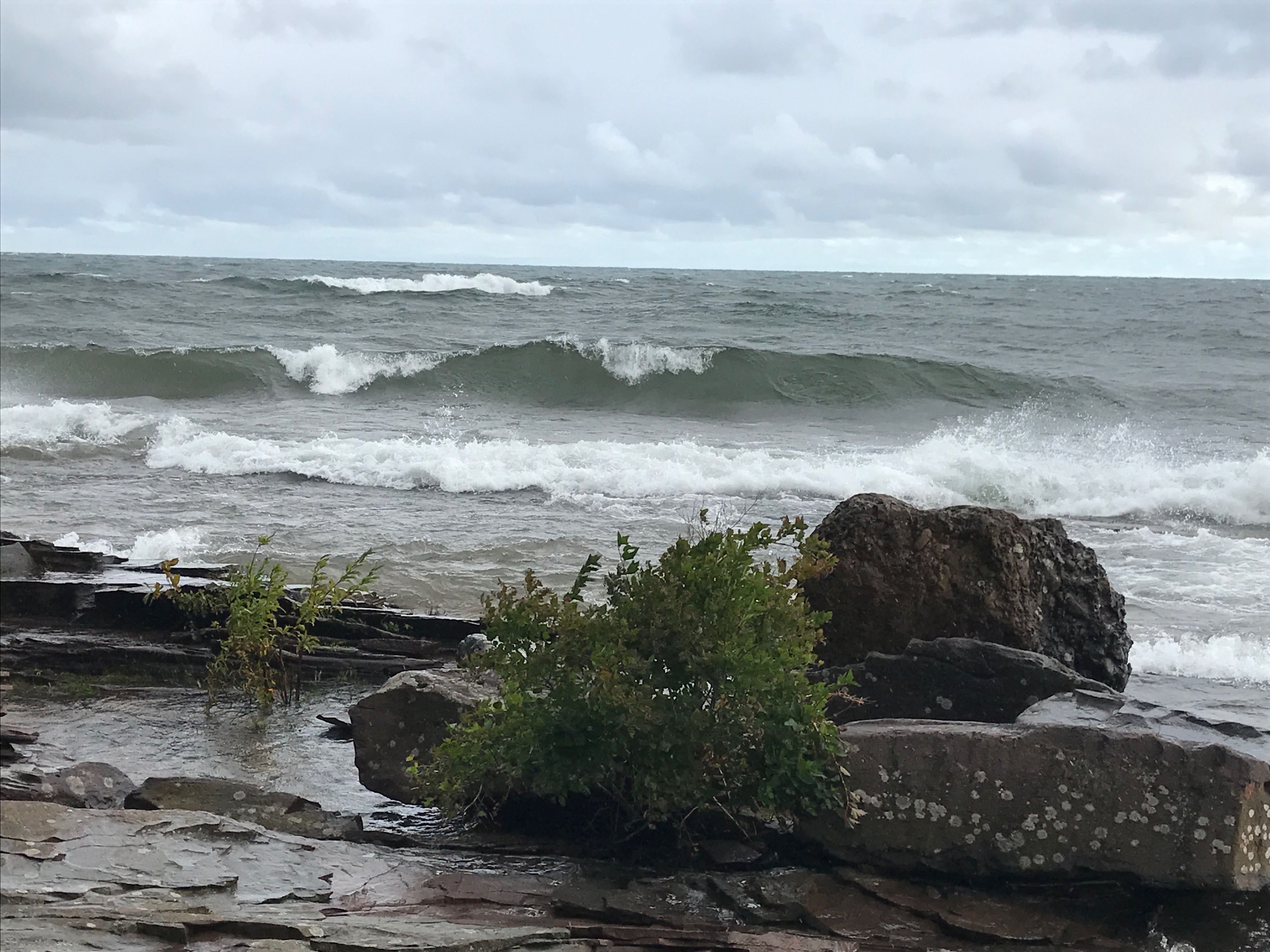 …by a full-blown gale.

See the park and, if you’ve timed it right, a spectacular fall color show, best on the drive to the Lake of The Clouds overlook, and at the cliff-side overlooks the road’s end. You’ll be looking at the most extensive stand of virgin hardwoods in America west of the Adirondacks, home to everything from gray wolves and black bears to eagles, and possibly a cougar or two. 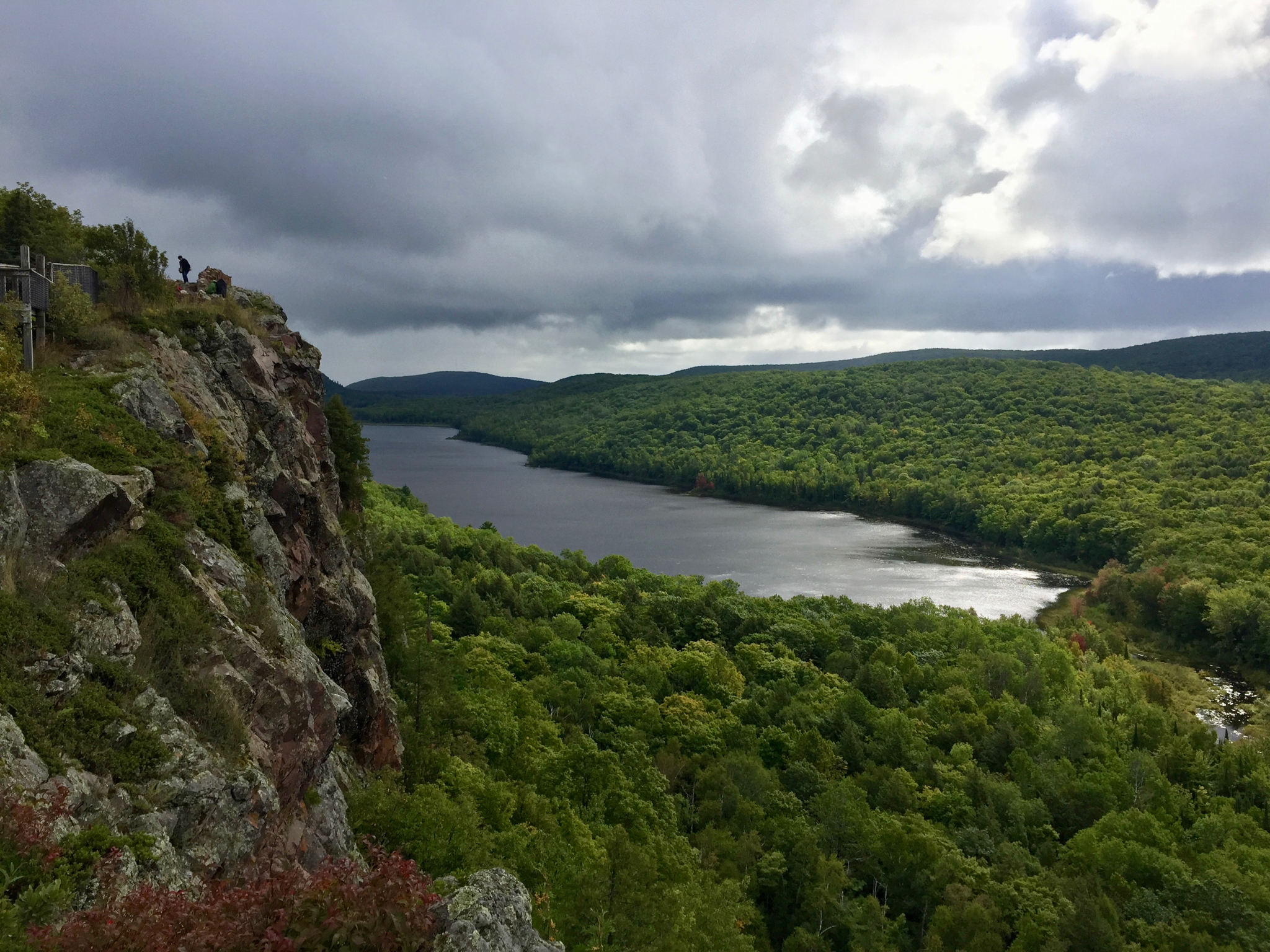 Alone sugar maple along the Carp River leading to Lake of the Clouds heralds the start of fall color season at the Porkies.

Now head back and turn southwest on S. Boundary Road to link up with other spots to visit, including the old Nonesuch copper mine, Copper Peak sky flying complex—it’s ski jumping on steroids—and waterfalls on the park’s west flank, especially on the Black River and its National Scenic Byway, which eventually flows into Superior at a beautiful 40-site national forest campground, semi-rustic, with flush toilets. The park includes a picturesque pedestrian suspension bridge across the river. 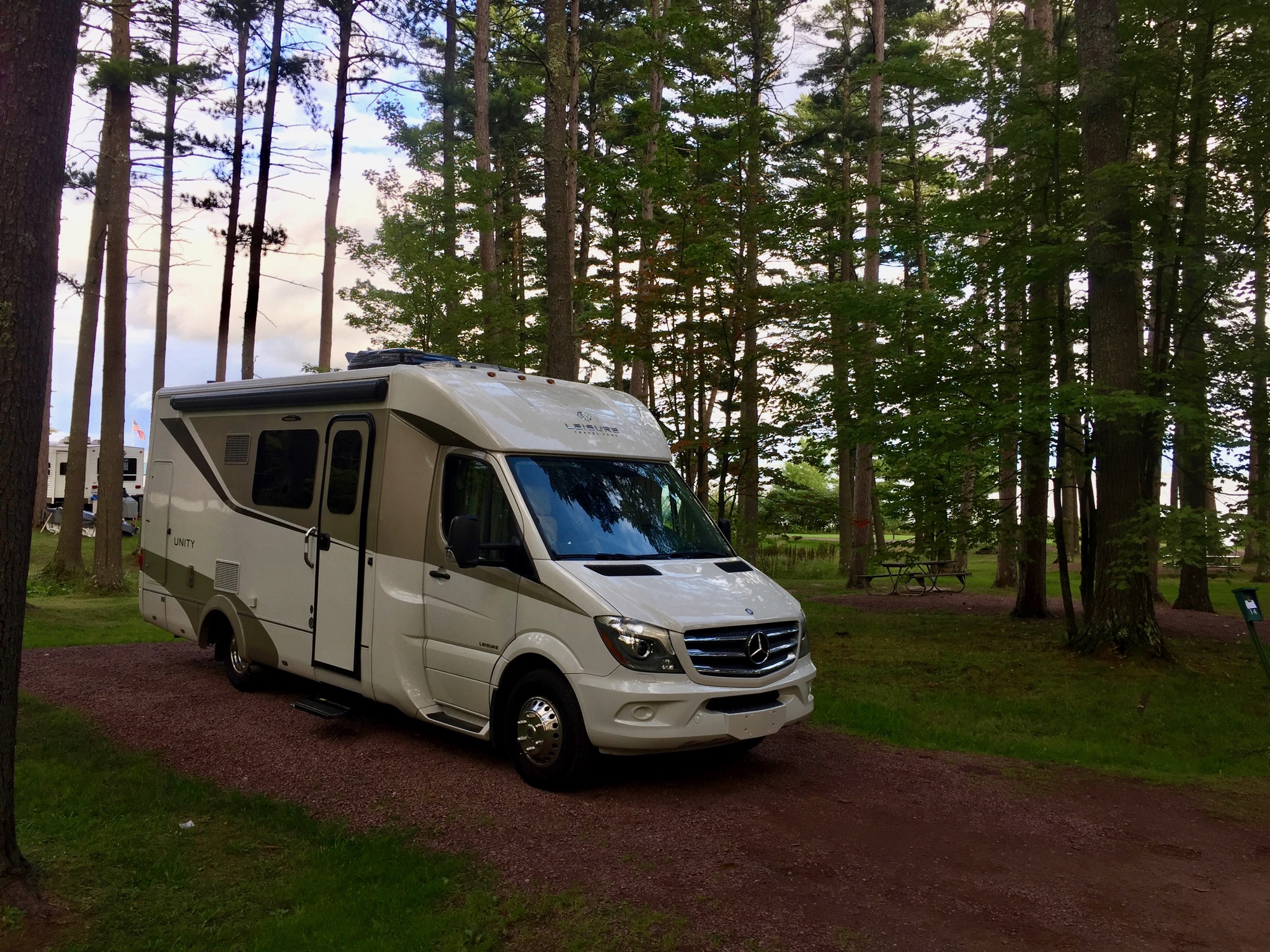 No trip along Superior’s Wisconsin coast is complete without a boat tour of the Apostle Islands National Lakeshore, 21 rocky cliff-faced islands off the New England-style town of Bayfield.
To stage, we stayed 12 miles south in Washburn, WI, at the city’s lakefront Memorial Park Campground, making it an easy trip the next morning. 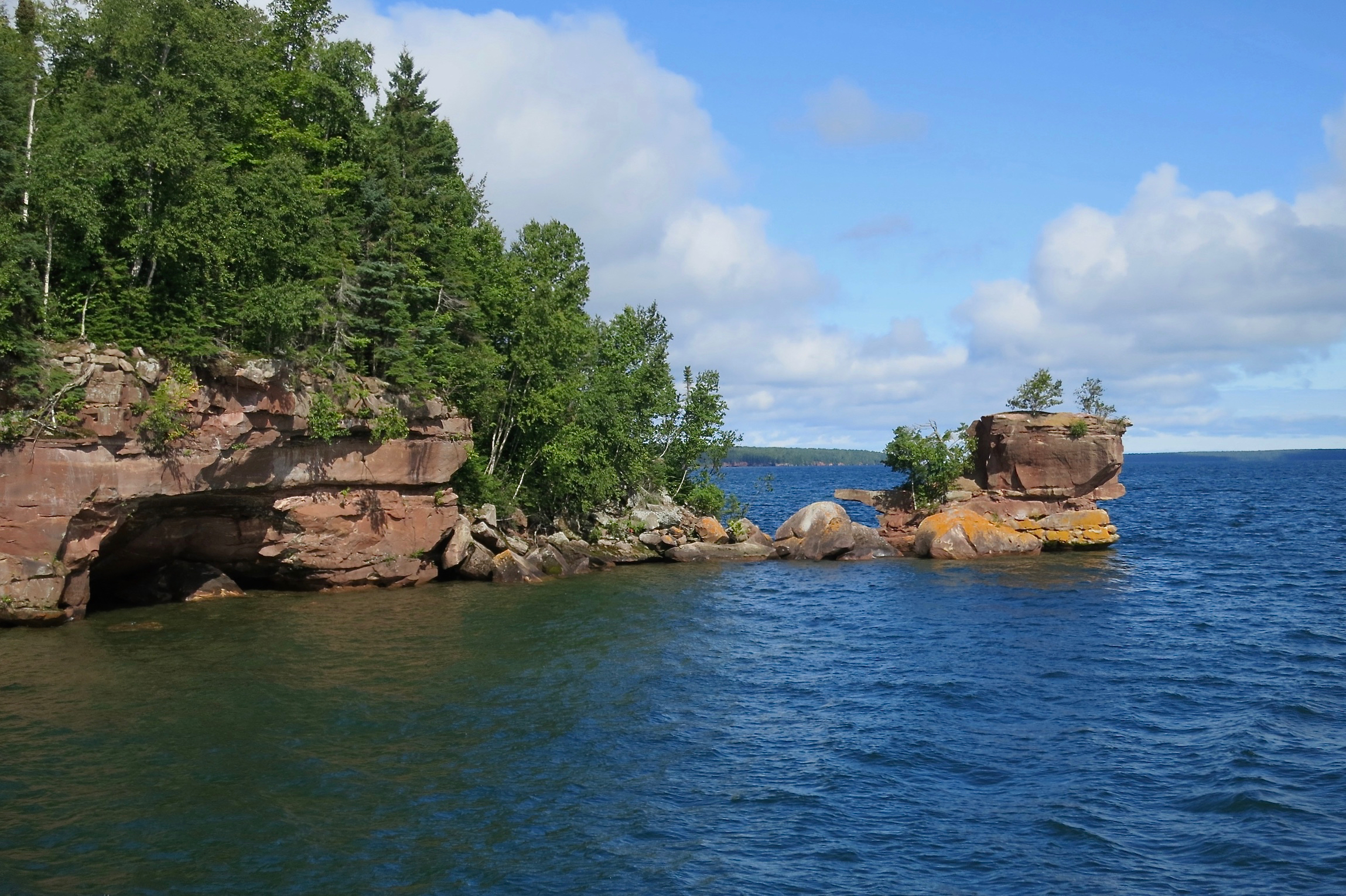 Some of the wind and water-carved sandstone of the Apostle Islands National Lakeshore, seen from cruise boats, right. and depending on the tour, you’ll see wind- and water-formed cliffs, caves, pinnacles and other formations similar to those at Michigan’s Pictured Rocks, described by onboard narration. There is plenty of free, city-provided, RV parking near city hall down the street. Just ask at the office. 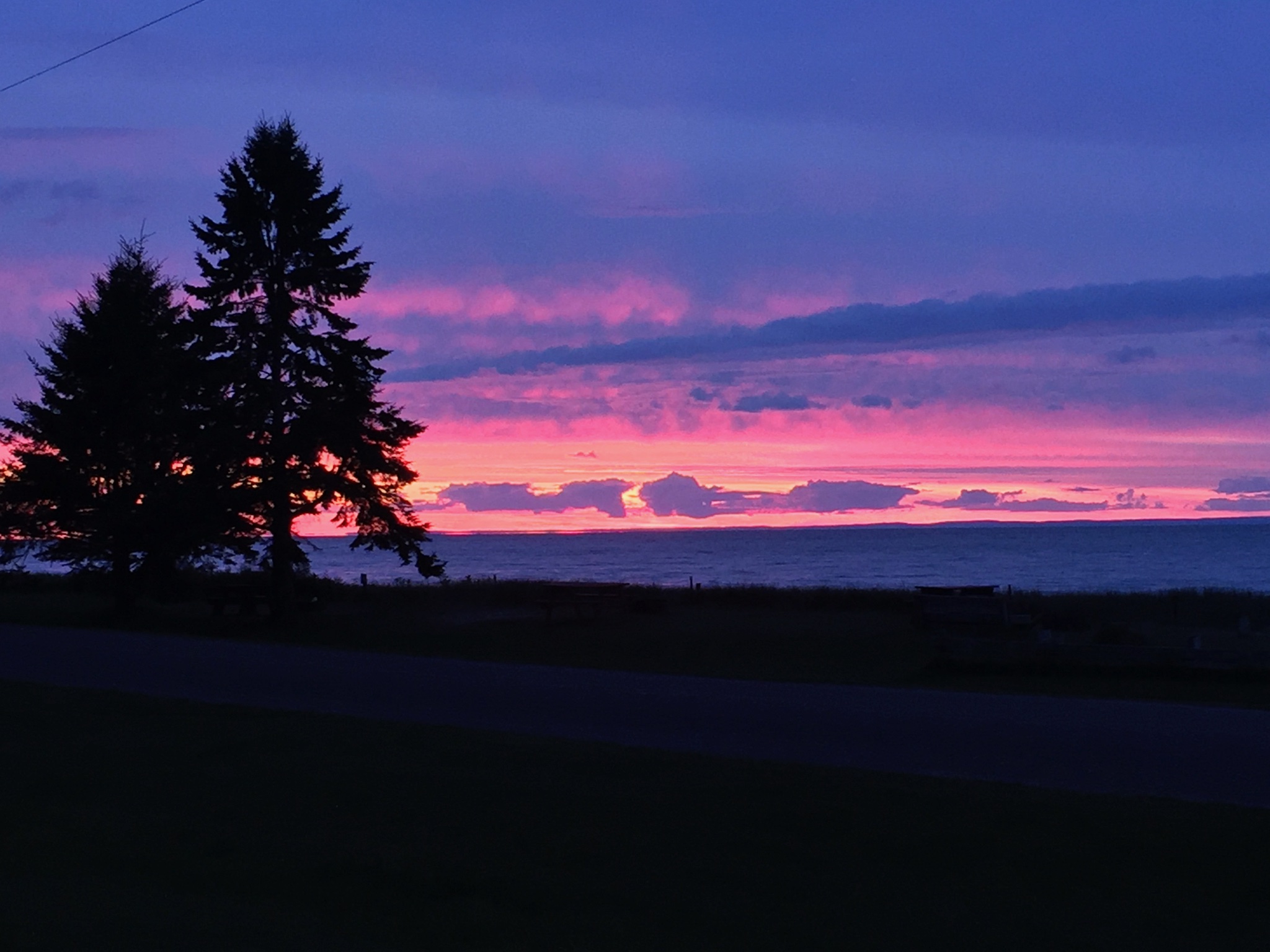 Following our four-hour tour, we continued north and west on  Hwy. 13, the Wisconsin Lake Superior Scenic Byway, to an out-of-the-way community campground at Herbster, WI. We grabbed a spot with a Superior sunset view across from the beach. It more than makes up for its simple facilities of two one-stall showers, dump station, water and electric hookups with the location.

Minnesota’s Superior shoreline holds some of the best lake views of the U.S. side. Swing through the port city of Duluth and take Highway 61, sprinkled with signs denoting it as the road made famous by Bob Dylan’s song, Highway 61 Revisited. It’s also a designated scenic route, and it’s easy to see why, with lots of opportunities to stop for beautiful lake views that may include a passing ship heading towards the grain and ore terminals at Duluth. It’s a 47-mile trip from Duluth to one of the western lake’s most scenic and historic spots, Split Rock Lighthouse.Called one of the most photographed lights in the U.S., it’s easy to see why. Perched on a volcanic outcropping 130 feet above the water, it was built after a series of November 1905 storms lashed the lake, sinking or damaging 30 ships on Superior alone, including The Maderia, which went down below the rocks where the light now stands.
After paying your admission fee, just $8 for ages 65 and up, visit the gift shop, climb to the light, and head along an easy dirt path for iconic post-card views.

Walk-in tent camping only is available at designated sites, so we headed seven miles south, back to Gooseberry Falls State Park, and one of its 70 non-electric sites near the mouth of the Gooseberry River. There are showers. Three cataracts make up the falls, viewed from an easy hiking trail alongside the river that will take you almost to the falls brink, and the end of Part One of our Superior tour.

Next up: Venturing into Ontario