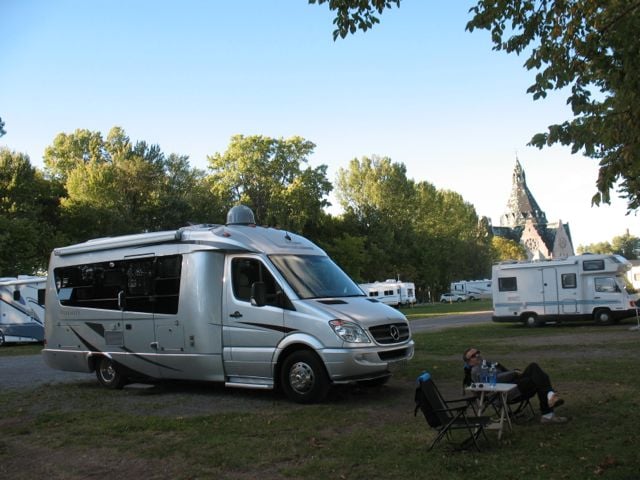 Manny and I both have our duties. 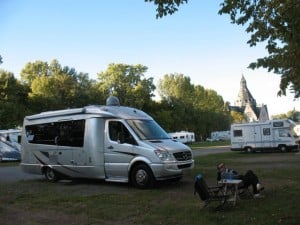 Most travel guides, even those provided at the tourist information centers, are painfully boring. I’ve started consulting Trip Advisor and similar travel websites for the opinions and photos of other visitors.

We were headed for Trois Rivières, an old port city between Montreal and Quebec. A friend of ours, Kathy Lariviere, owns a web design business in Iowa called Three Rivers Promotions, so Manny and I wanted to buy her a memento from her French namesake. While there, I wanted to check out what Trois Rivières had to offer.

On almost every web site I visited, the number one recommendation was the Sanctuaire Notre-Dame-du-Cap. Visited by thousands of believers each year, the basilica is Canada’s national shrine to the Virgin Mary. The Madonna inside the chapel has been considered miraculous since 1888, when her eyes allegedly became animated.

We wound our way down narrow streets, through construction bypasses and rush hour traffic, and finally arrived at the massive church. Although it seats over 1600 worshippers, Manny and I were the only ones there to experience the peace and tranquility that filled the sanctuary. After lighting a candle for Gerardo, Manny’s father, we left the basilica feeling refreshed and renewed. 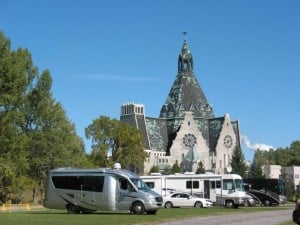 Just as we wondered where we would spend the night, we noticed a number of RVs parked below the church in an expansive lot bordering the St. Lawrence River. When we approached, we read a sign which indicated that this area was designated as accommodations for the pilgrims who wished to stop at the peaceful haven and rest in a spiritual environment.

Aside from its massive church, Notre-Dame-du-Cap offers visitors a wonderfully serene garden with sculptures depicting scenes from the lives of Jesus and Mary, where one can stroll and meditate peacefully. 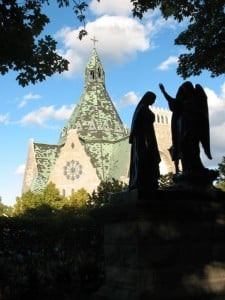 Although neither Manny nor I consider ourselves religious, we are spiritual people. Like many other weary travelers, we felt welcomed at this retreat. As it was late in the year, after most of the visitors had left, there was plenty of room for our little Serena.

When we entered the area, we were received warmly, instructed on the rules —including a three day maximum stay— and given an envelope for whatever donation we wished to make. Although there was no water or electric provided, the sites were spectacular, with the best and closest river view we have had yet.

For the full story, see http://2adventurers.com/canada/a-church-with-a-view/nggallery/