We grew by two! 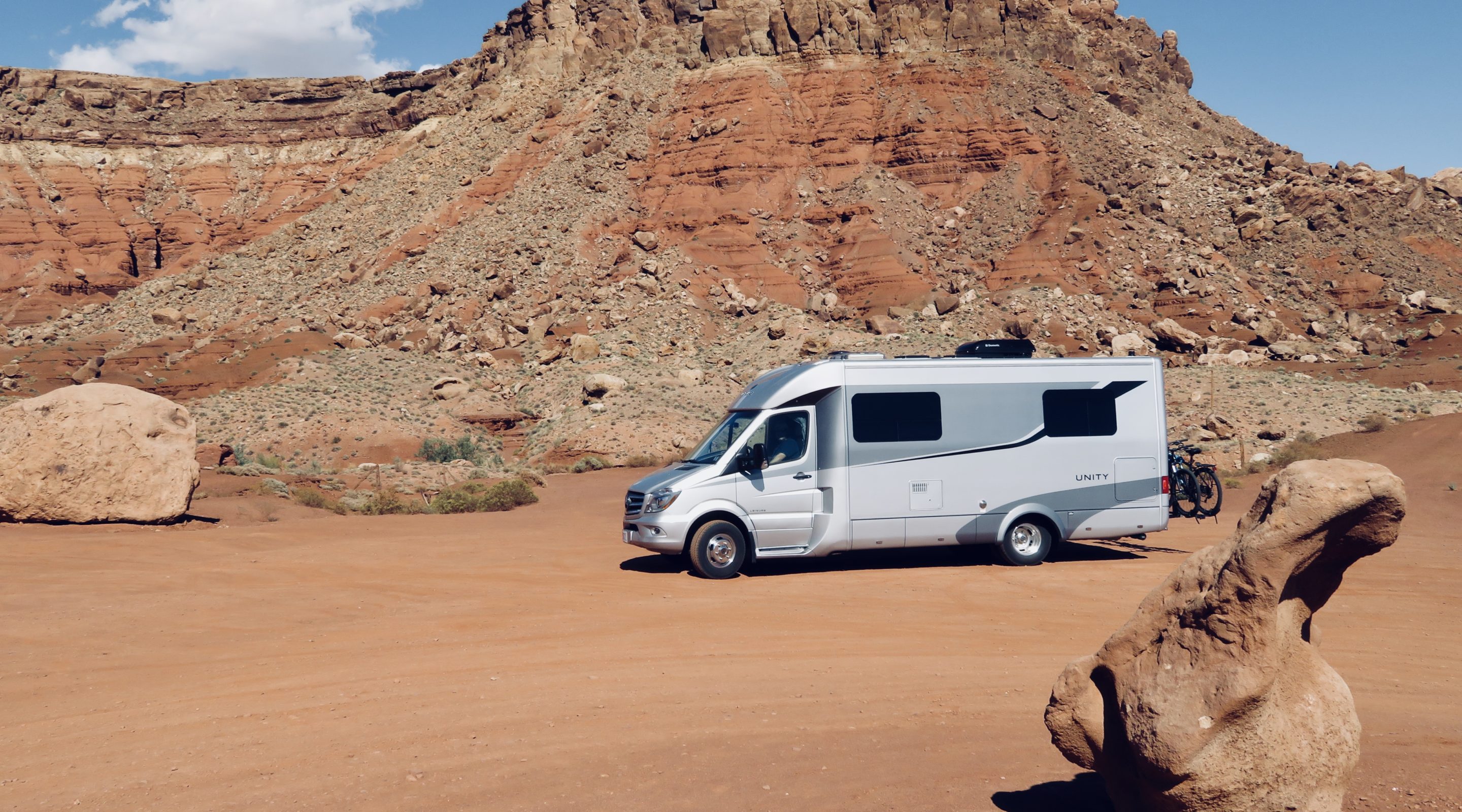 One of the reasons we chose to buy a Leisure Travel Van was because of its compact size and manoeuvrability. We knew, or at least we hoped, that we could go everywhere with it, because, that’s what we wanted to do! Go Everywhere. 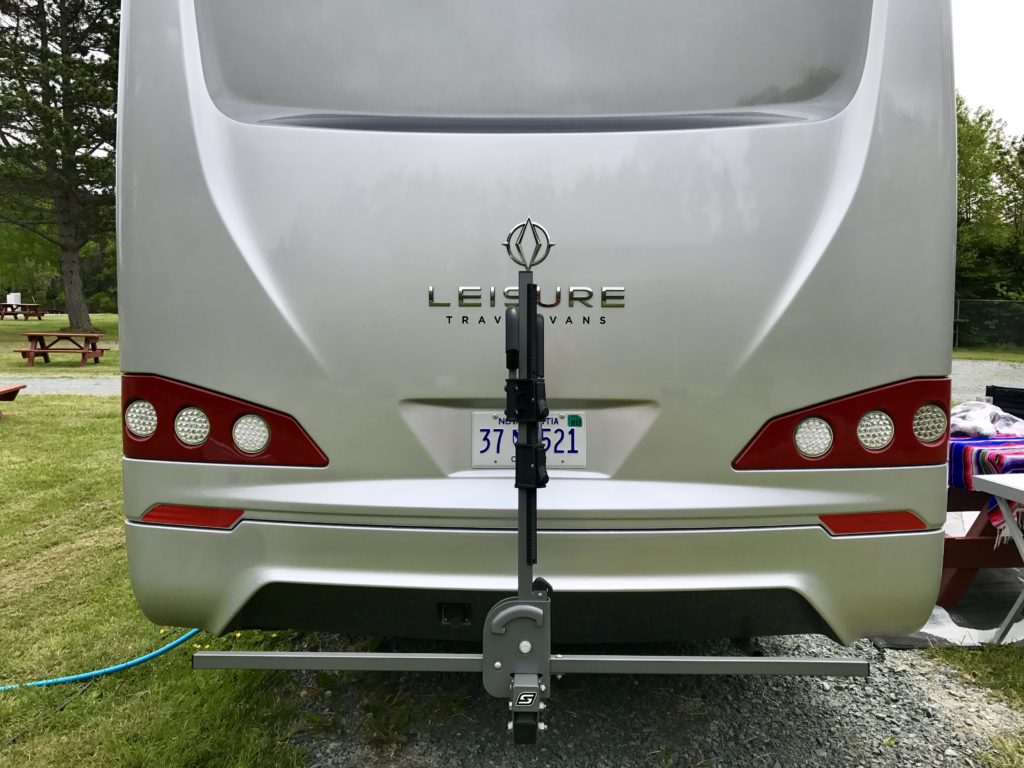 And we wondered, and agonized, all the long while that we patiently waited for its arrival, whether we needed a TOAD to go with.

For those not in the know, a TOAD stands for a Towed Vehicle. We don’t own a car to tow, and we *really* didn’t want to buy one, because, well, we bought the LTV to be our car.  Funny though, while parked at the LTV Factory in Winkler, settling into our brand new UnityIB, we met a fellow LTV’er just passing by, who just happened to be selling his TOAD: a really cute little Smart Car. And on the impulse of the moment, we *almost* bought it. We talked ourselves out of it though.

So then what? We switched gears, learned ourselves some research, and pedalled ourselves towards something else. How about a motorcycle? Or a Scooter? And then there are Bicycles? Or how about those E-bikes, for those longer distances?

The list of questions, the head-scratching and pondering, the pros and cons of each went On and On.  While Dave has a Motorcycle licence, I’d need to get mine. Something I was quite open to and willing to do. But motorcycling would put us on busy streets, busy-er perhaps then what we were hoping to do during our time not EnRoute. Not really the way we were leaning.

Would carrying extra weight increase our fuel consumption? And we love to hike, how would we combine another activity with that? Did we really need anything else? We were getting pretty tyred of all the questions we were asking of ourselves.

Never having RV’d before, we didn’t quite know how we would adapt to this new-to-us lifestyle. How would RV’ing Adventures play out, really? There’s the *idea* that one has, of what you imagine this lifestyle to be.  And in our experience of travelling, we’ve learned that there are the *reality* of what it’ll actually be like when you’re out there, *for real*.

Being ever prudent, we gave ourselves a season of adventuring, to see how we would evolve. And especially how many times during our trip we might say something like “Gee, I wish we had… a TOAD? A motorcycle? A scooter? Bicycles?” Right? 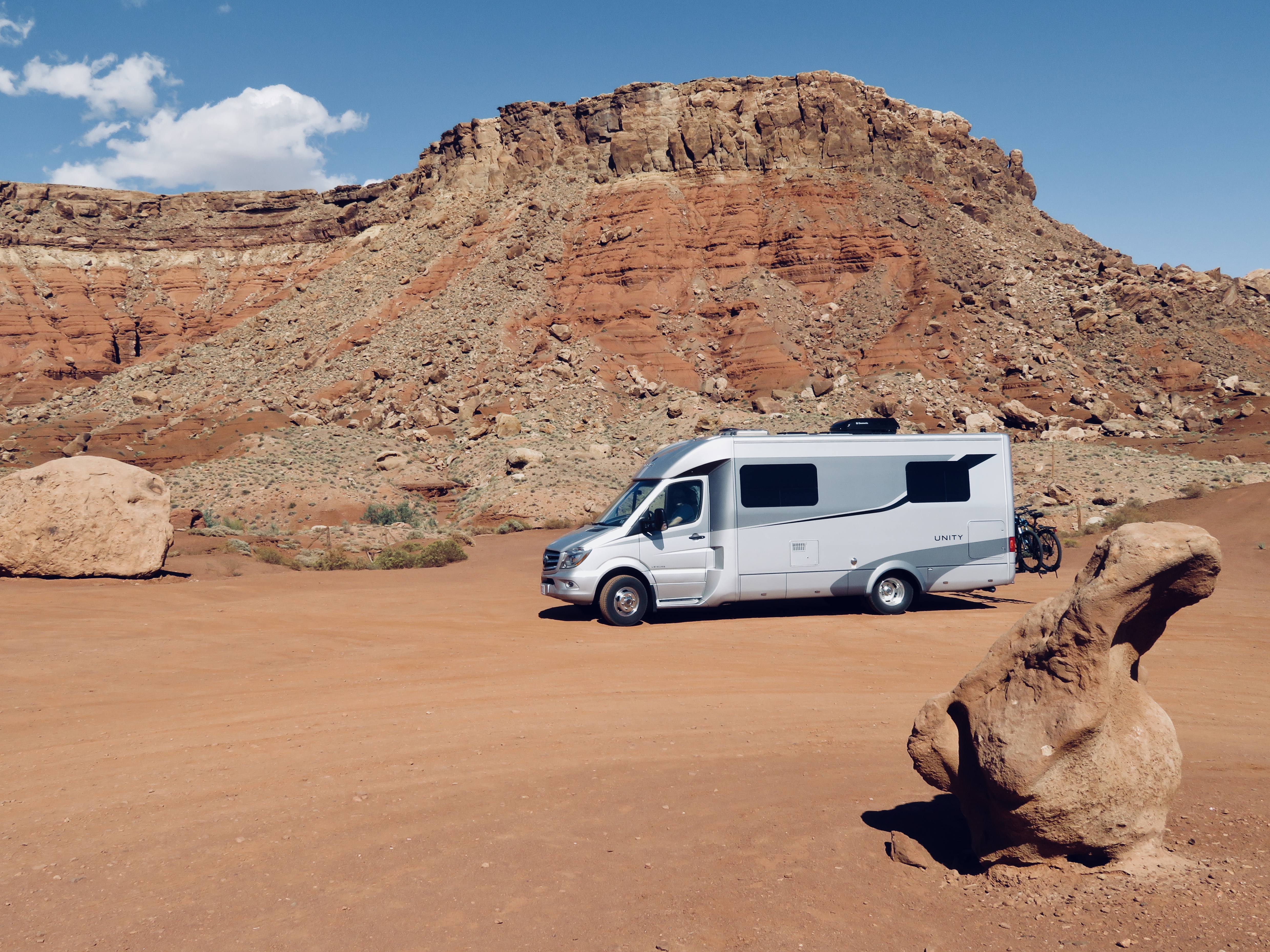 So what did we learn during that first Season? In our travels, there wasn’t one campground we haven’t been able to get into or get out of with our Leisure Travel Van. There’s not one parking lot we haven’t been able to find a spot to park safely in. And since we tend to move around every few days to a week or so, there was *never* a time we said, “Gee, we wish we had a TOAD.”

And when we Adventured in places, we never really felt the need for a Motorcycle/Scooter, although, we both agreed, that in some instances and in some places, it certainly would have been a lot of FUN!

Then there was this one time in South Carolina where we met up with dear friends who surprised us by planning a day-long adventure. When we arrived at the parking lot we thought we were stopping for a coffee. Instead, we went next door to the bike rental shop!  Boy, were we surprised. And intrigued at the Adventure that lay ahead of us.

We first had to pick a helmet. Something both of us HATE wearing. 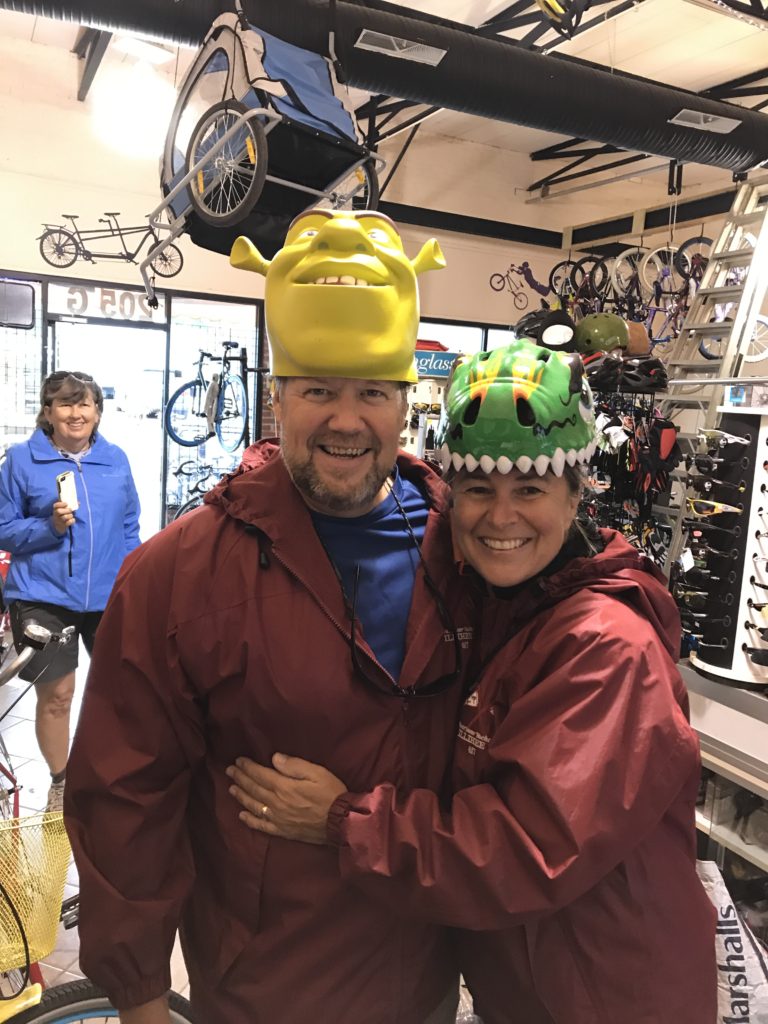 But we got past it, and our Adventure would take us on 16 miles of the Swamp Rabbit Trail. On a perfectly paved path. On rental bikes that weren’t really all that comfortable. Or made for my small size. Or Dave’s bigger frame. 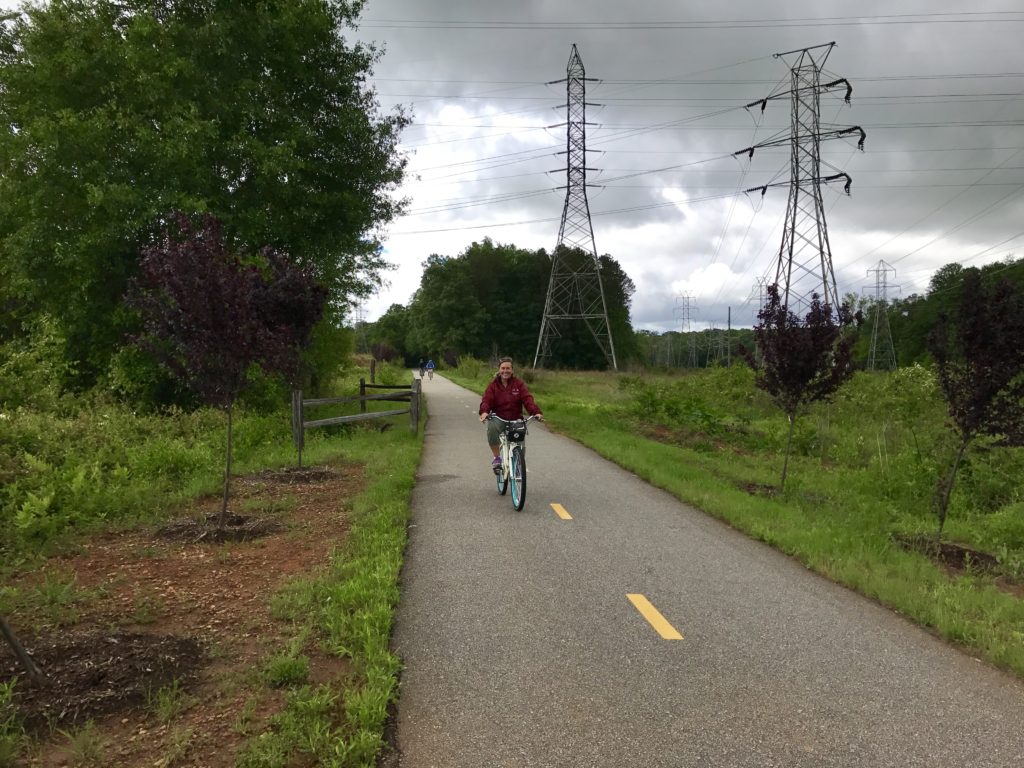 And GollyGeeWhiz, didn’t our thighs start to ache in about, oh, the first five minutes?  What’s that, not even a mile?  How were we going to do 16 miles? However, the scenery soon took our aches away, and what a bunch of FUN we had. Stopping whenever wherever along the way. And I didn’t even for one moment feel guilty about ordering, and thoroughly enjoying  {{ without sharing }} an entire portion of dessert with lunch that day.

The next day there were admittedly just a few moans and groans as we got ourselves out of bed. Our bodies had responded to this new movement with complaints in muscles that hadn’t been used for a very long time. And Boy did our Butts ever hurt! We laughed about it. And we talked about it. And promptly realized, with growing enthusiasm, that cycling just might be *our thing.*

We discussed how bicycling would allow us to go further than hiking might permit, we would see more. We would still be able to enjoy the fresh air, the outdoors. We would be able to stop for snacks or lunches, or whenever Photo-Ops might appear. We would be getting some exercise. All important things for us.

Other than the buying of equipment, there would be no added cost, because it’s “all ass, no gas.” What a cycologist type of revelation, huh?

What followed was a bit of research to narrow down what KIND of bicycles we wanted. We knew we wanted to be able to go anywhere; from asphalt roads to bicycle paths to OffRoad trails.  As we got excited at the possibilities, we knew we wanted to tackle not only quaint little village streets but trails strewn with tree roots. We wanted to gear down on the hills and tackle the leaf-strewn paths with safety and speed, and *tires only know* what else.

As we finished our Season and came back home to Halifax, we visited a few shops and gave them our list of wants and needs. Walking away from each shop had us knowing a little more about what we wanted. And what we didn’t. After battling with some of the likes and dislikes, the pros and cons, and yes, even the Customer Service we received, we finally chose to go with Giant Bicycle (Halifax) specifically the Talon 2 for Dave, and the Liv Tempt 3 for me.

And they were promptly told they were on order, and it might be a week or three. Don’t you hate buying something, and then having to wait for its arrival?

As we *patiently* waited for time to pass, we set about to researching and ordering all the accoutrements. Bicycle helmets, panniers, spares of all kinds.

And a bicycle pump!

“Did you know Bicycle pumps seem to get more expensive every year?”
”No, I didn’t. Really?”
“Yup, it’s all that inflation”.

and of course, we needed ourselves a Hitch. We ordered, received and installed the Swagman Hitch. 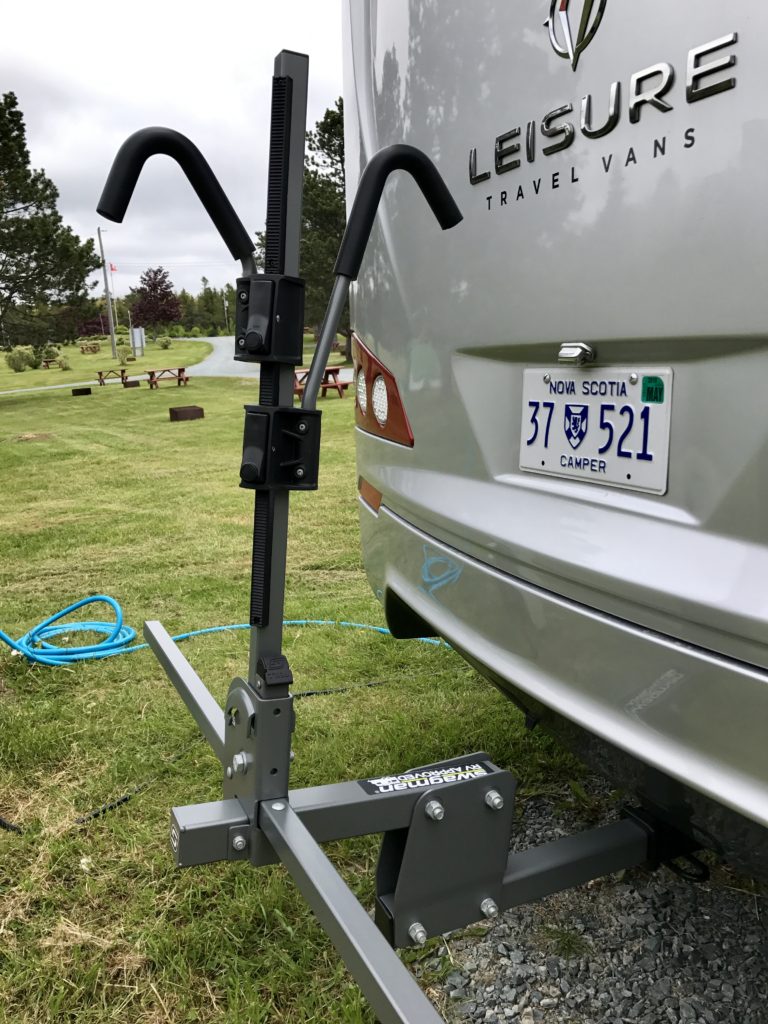 Just then? As if on Cue? We got THE phone call. Our bikes had arrived. And just like that, we grew by two. 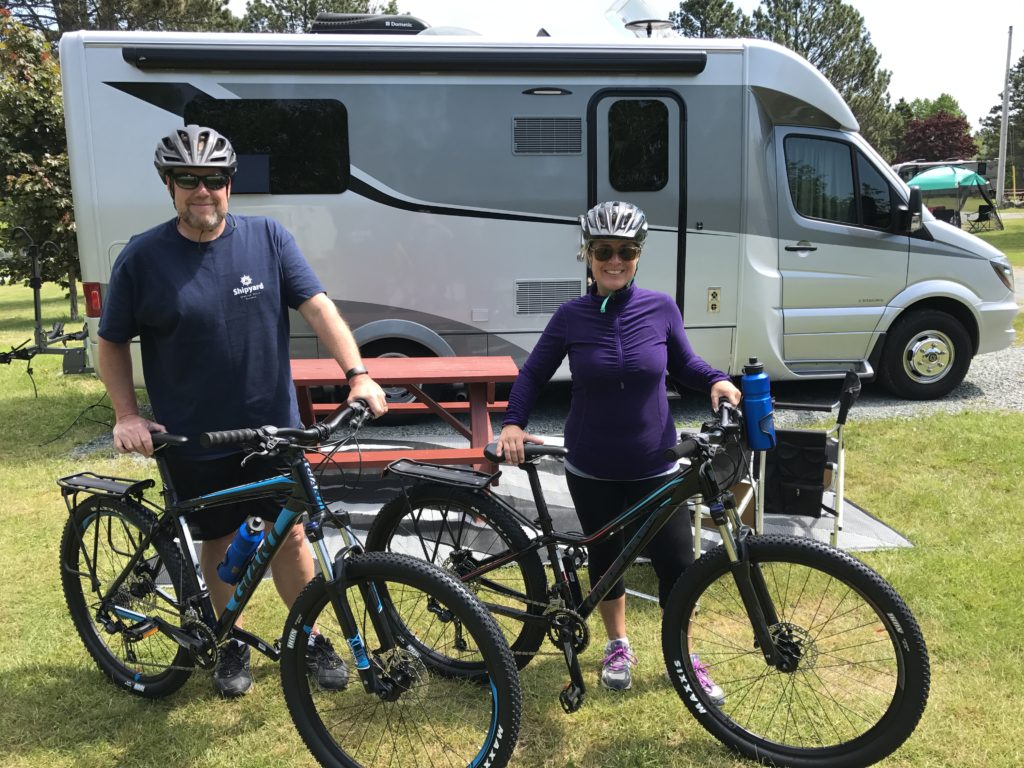 We were pretty darn excited to try them out. 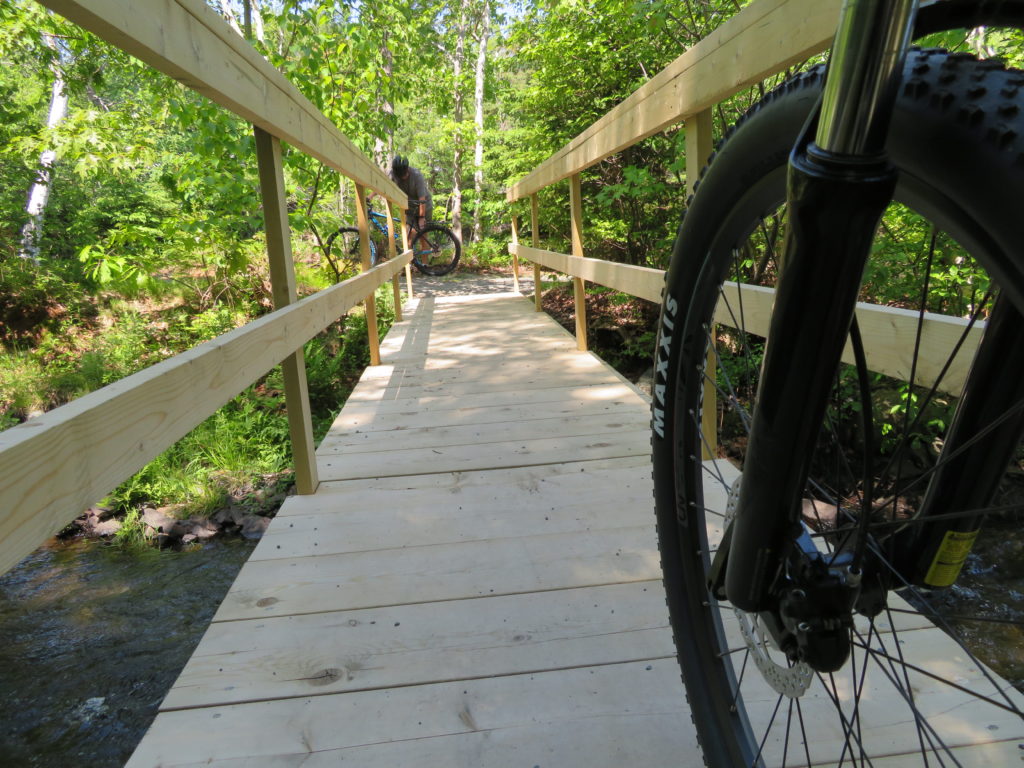 And found them to be extremely comfortable. Adaptive and responsive on all terrains we tried them out on. And yes, our butts were still sore. So we upgraded our seats.

Then came the real test. We started Season Two with Bikes in Tow. We travelled. And we used them. Oh boy, how did we use them?

We found ourselves needing to Get a Grip as we sunk into the soft sand. Walking in Sand while pushing your bike? Not as easy as it looks. 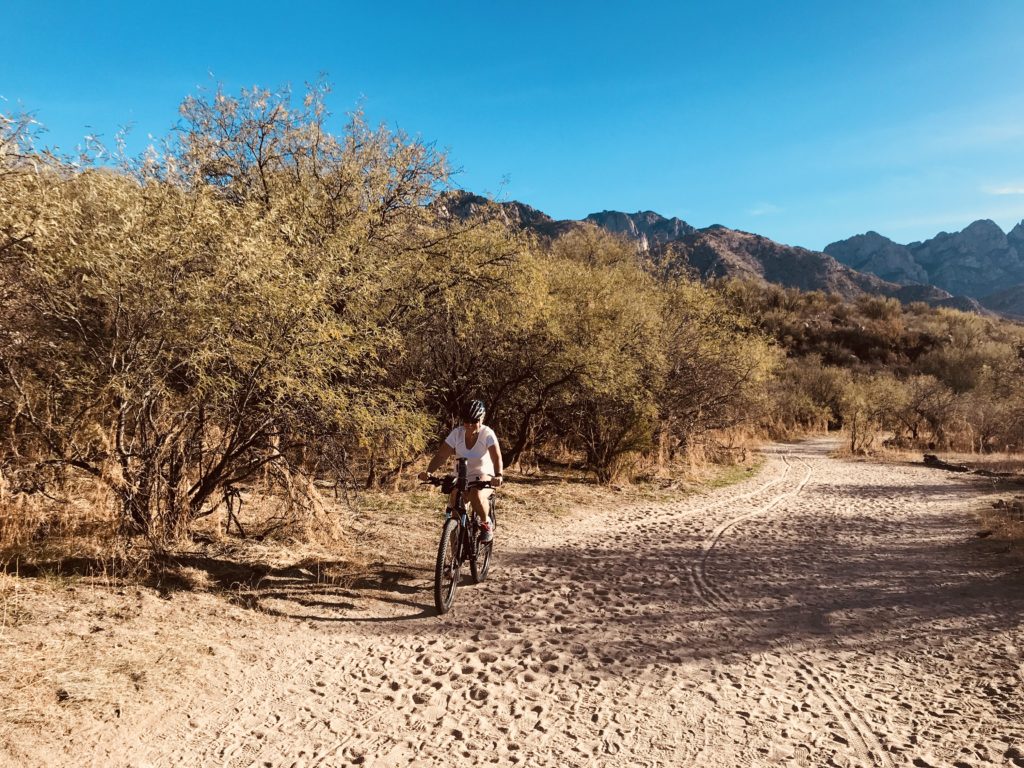 Cycling past some hazards on the road? 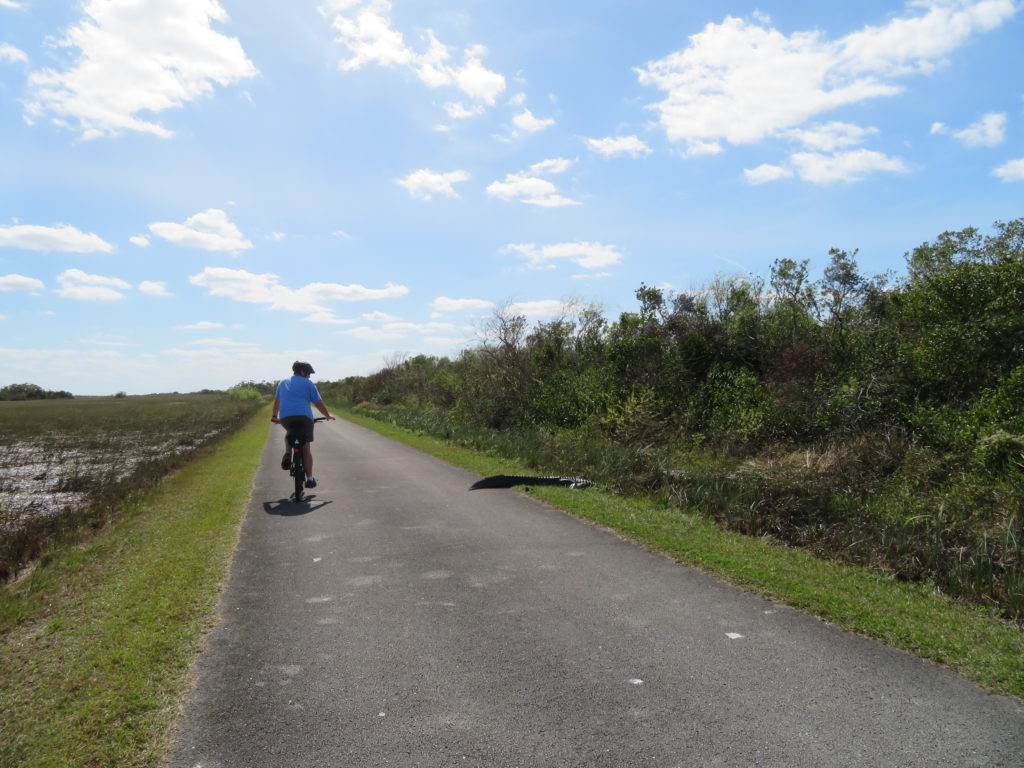 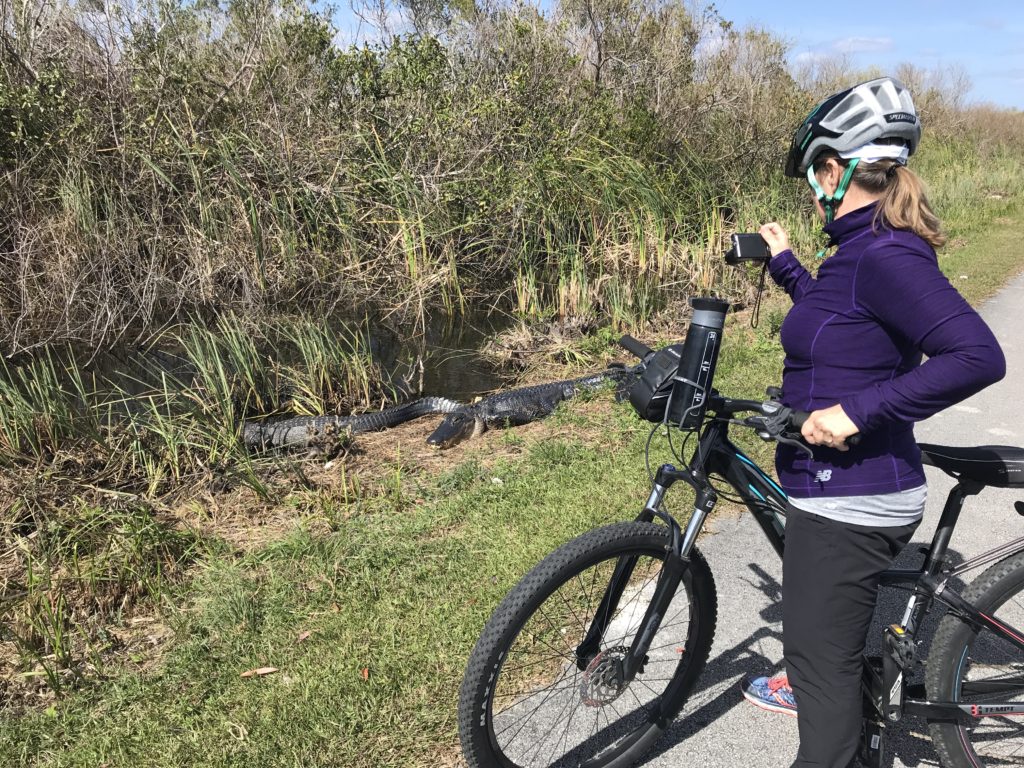 And when we were in Zion? The Zion Canyon Scenic Drive shuttle that we wanted to take was full. And the lineup for the next one? Even longer. So we looked at each other, and wondered if we were up to the challenge of riding our bikes? We thought we might be, knew we could take the shuttle if we weren’t, and turns out we rode the whole thing. And it remains one of the most memorable rides we’ve ever done. 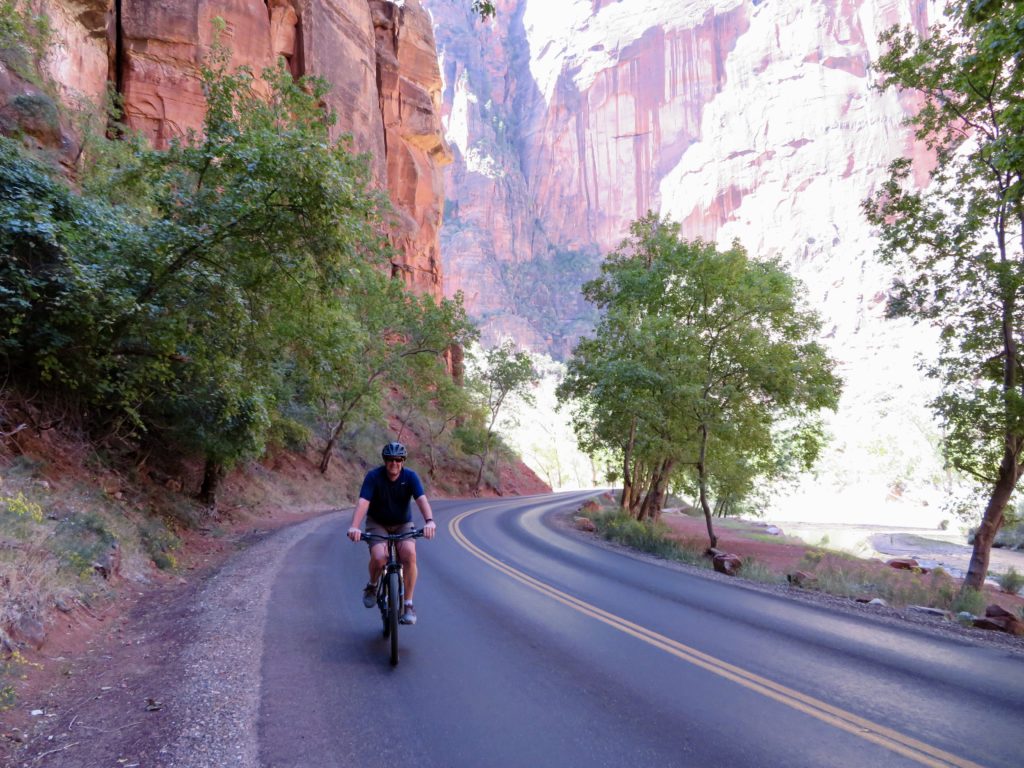 We got pretty tyred that day !!

During Season Two, we dealt with one flat tire. Thankfully it happened just as we got back from a ride: a nail punctured the tube just minutes from where our LTV was parked. While en route the next day, we Google’d ourselves a bike shop, and had it fixed in a matter of minutes.

And then there was that time that we went to disembark the bikes and found that the seat had some curious dents in it. We can only assume a very large bird decided to use the seat as an overnight perch, digging his very pointy talons into the cushy padding in an effort to get himself comfortable. What an imprint he made.

Please understand that this article is by no means allowing us to be SPOKESpeople of either Giant Bicycle, the Talon2 or LivTempt 3, or Leisure Travel Vans. This is just our story of how we Grew by Two, and how we’re happy users of all of the above. 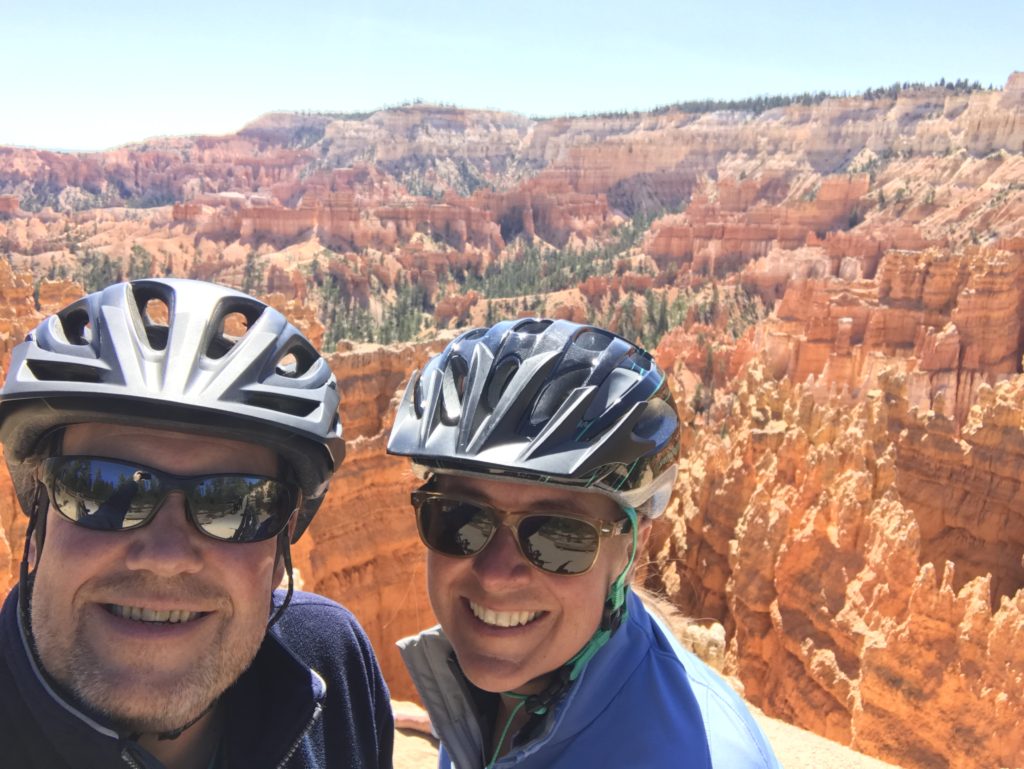 And appreciate your tolerance and enjoyment of all the Wheelie-Terrible Bike Puns.

Thanks for Reading, Ride OnOn!