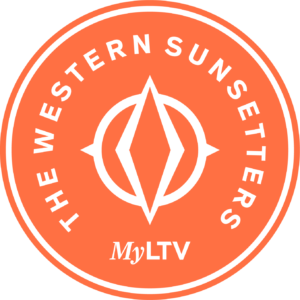 Twelve vans gathered at Thomson Lake Regional Park for our June Rally. There were 3 vans from Manitoba, 3 from Saskatchewan and 6 vans from Alberta. Six of our vans had been at the Rally in Drumheller Alberta the week before so when they arrived they had reports on their travels to Cypress Hills and Grasslands National Park on their way to the Thomson Lake Rally. 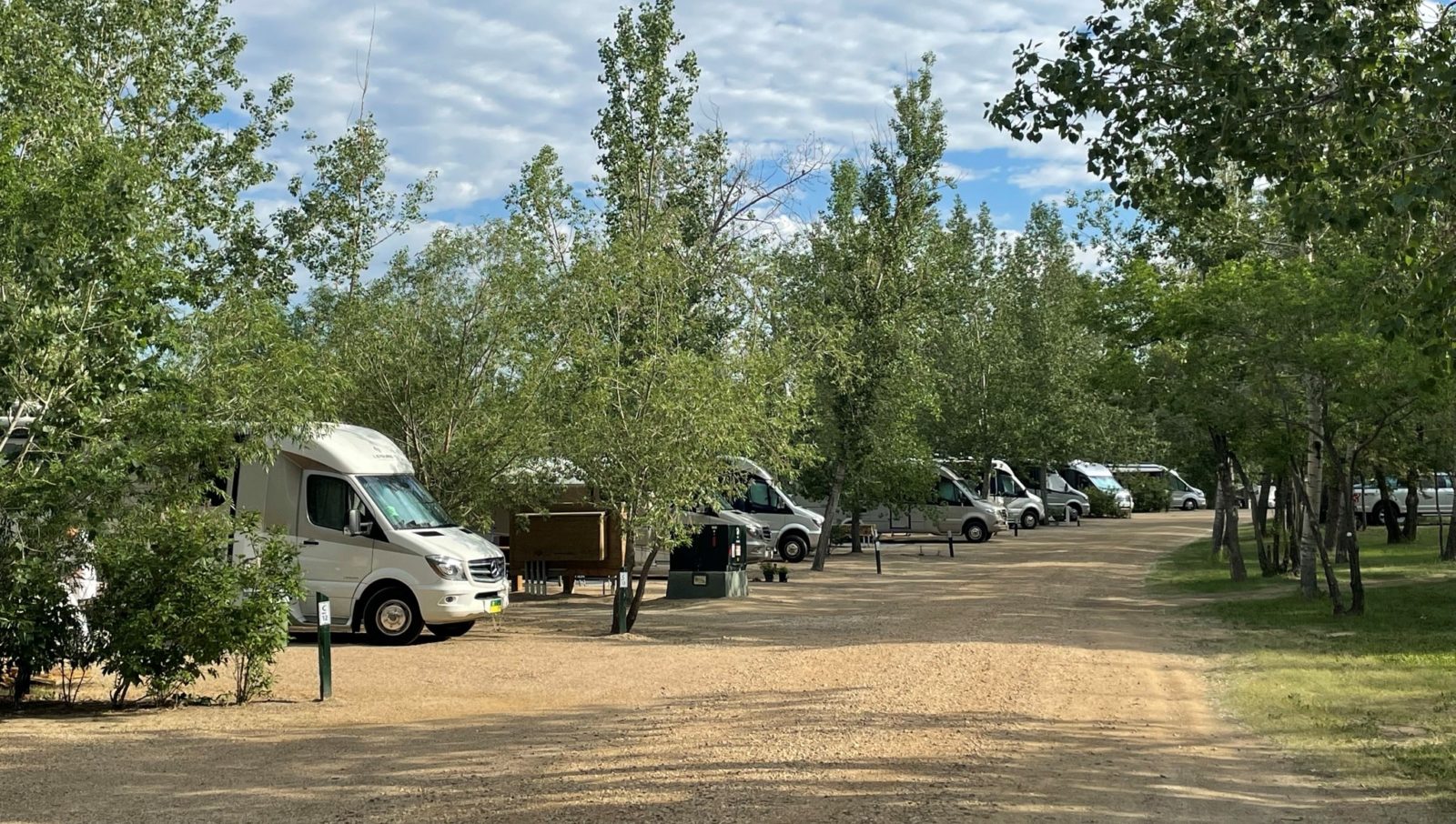 Tuesday evening everyone eventually introduced themselves to everyone else and we did get together for a campfire that evening. The weather was beautiful with a beautiful sunset. 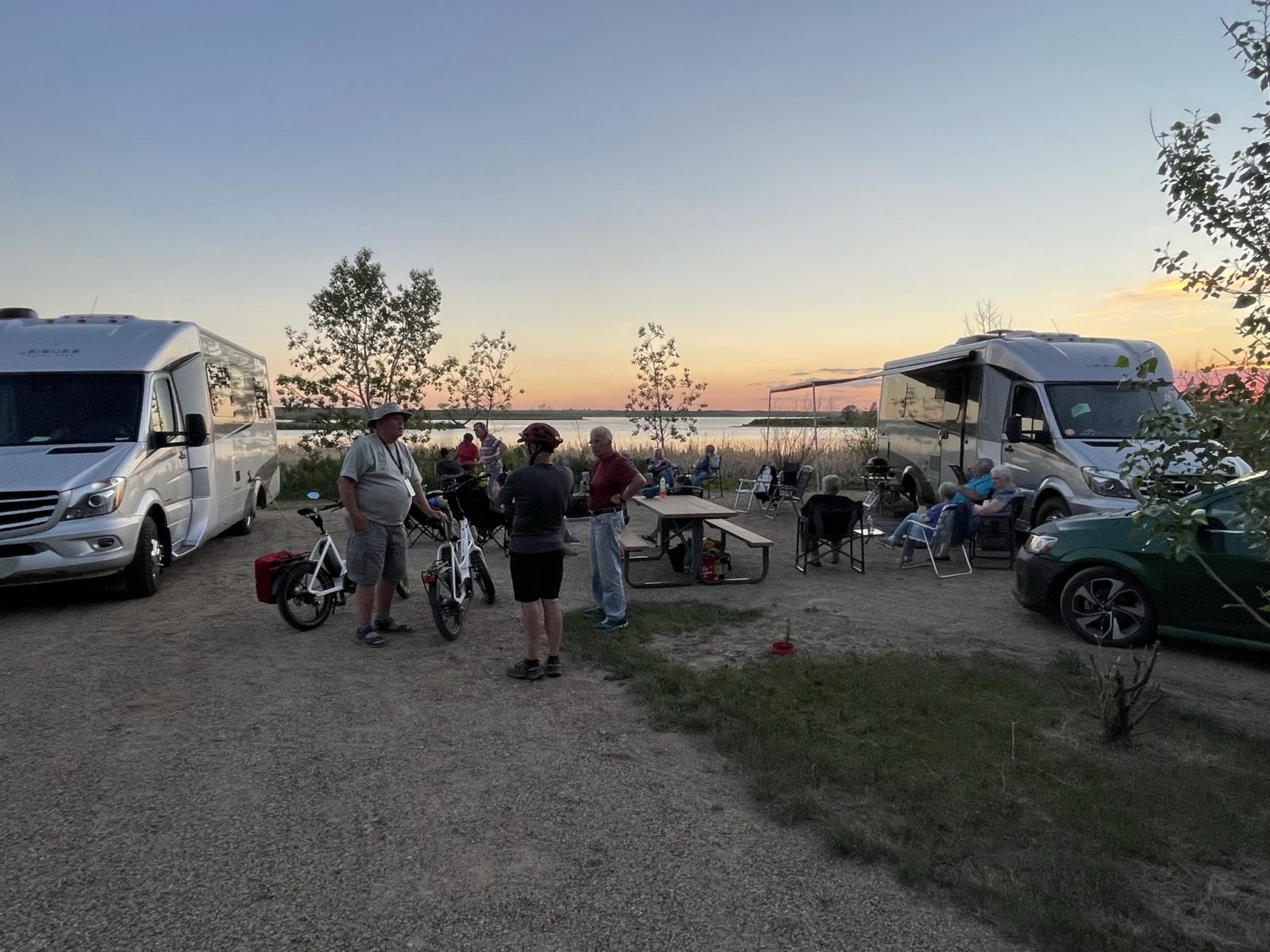 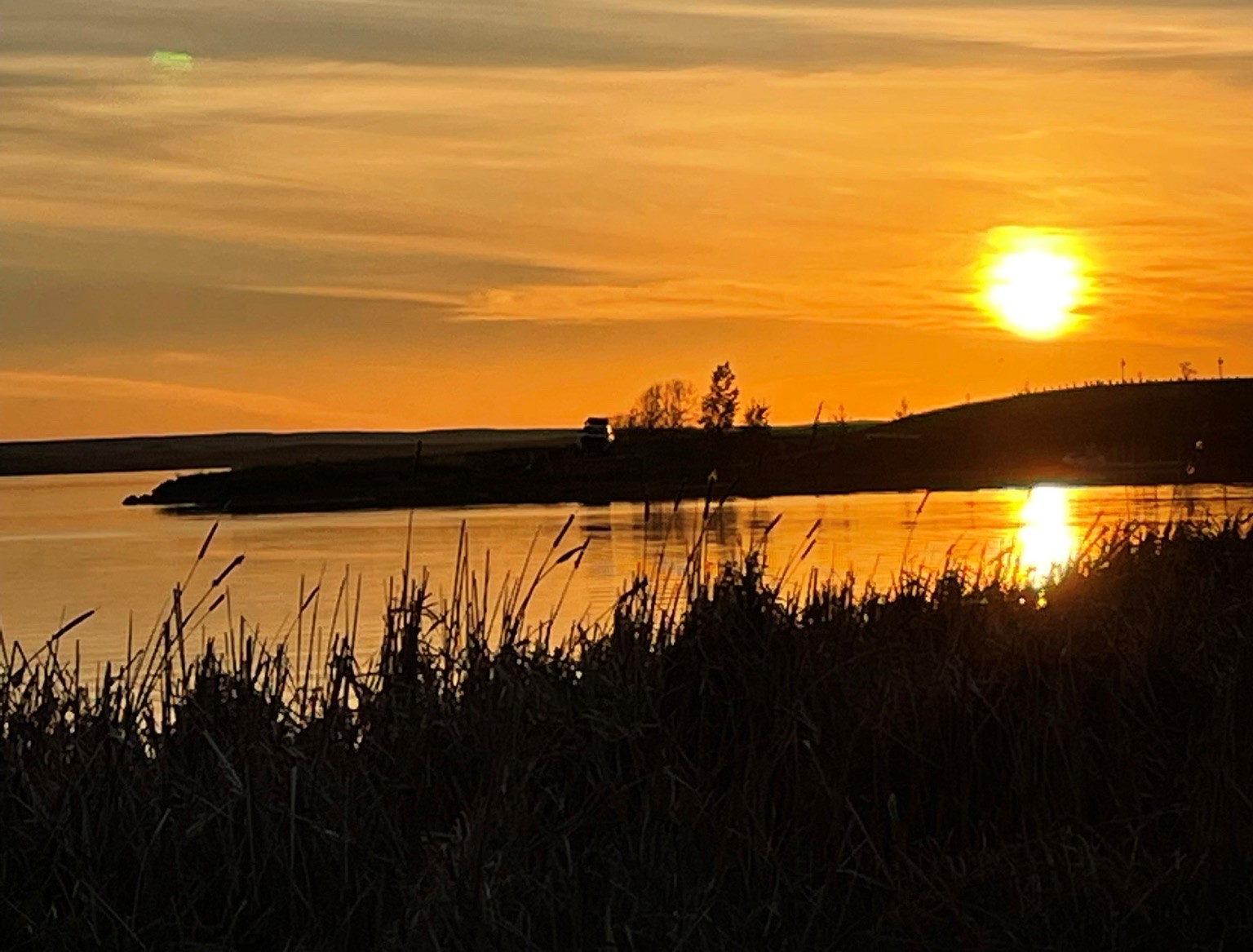 Wednesday was a casual day and people explored the park. A few went golfing at the park’s very nice 9 hole course. That evening Bill Harder and Roger Prevost fried up some wonderful Manitoba fish for everyone. Along with the salads that Hazel Lavoy and Angel Prevost prepared everyone had more than their fill and there was still more for people to take home for lunch the next day. One of the ladies said it was the best fish she ever ate. For me it was second best. Bill & Roger did a fish fry of Haddock on Haida Gwaii Islands for one our 2019 rallies. That was the best. 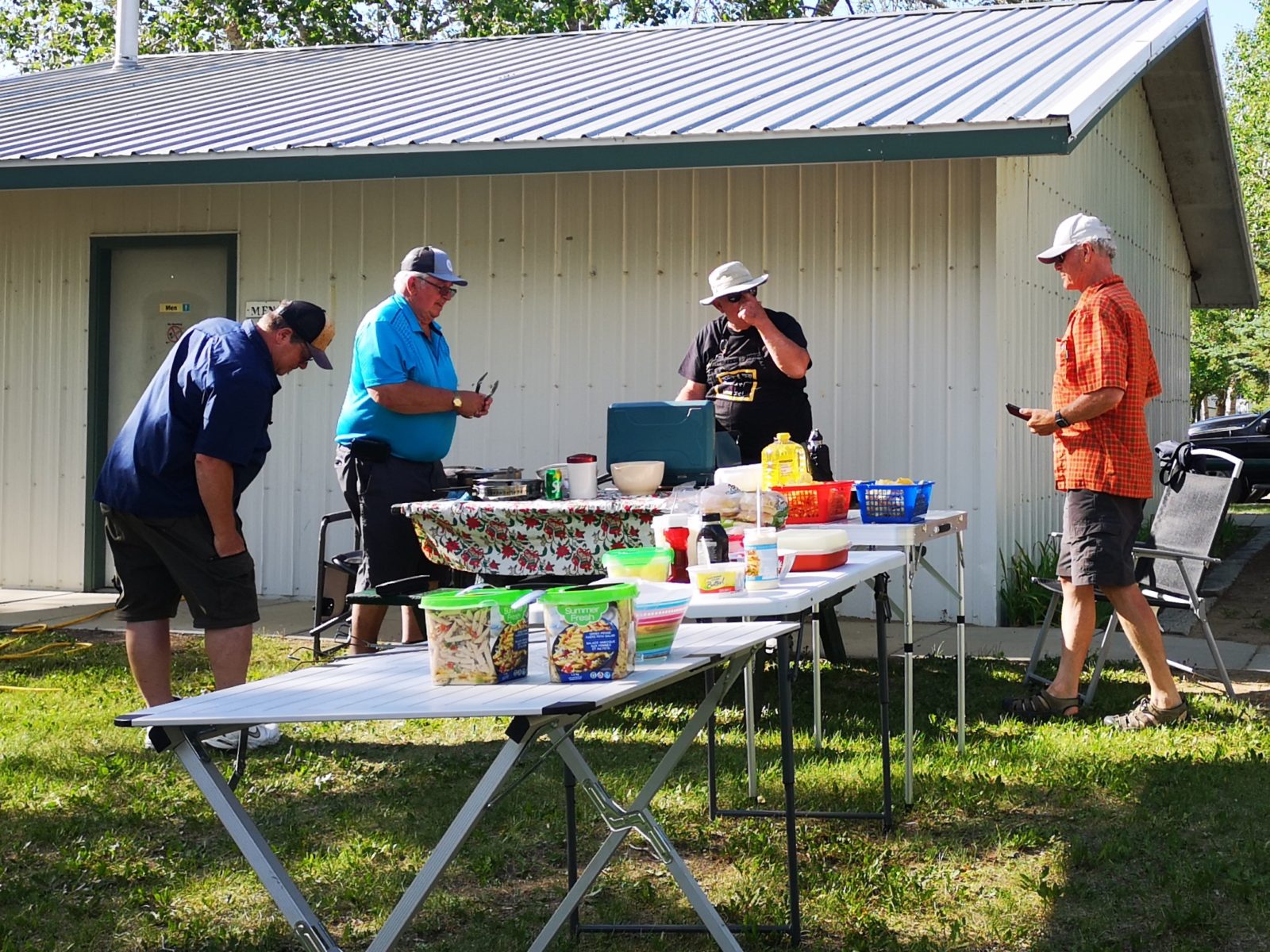 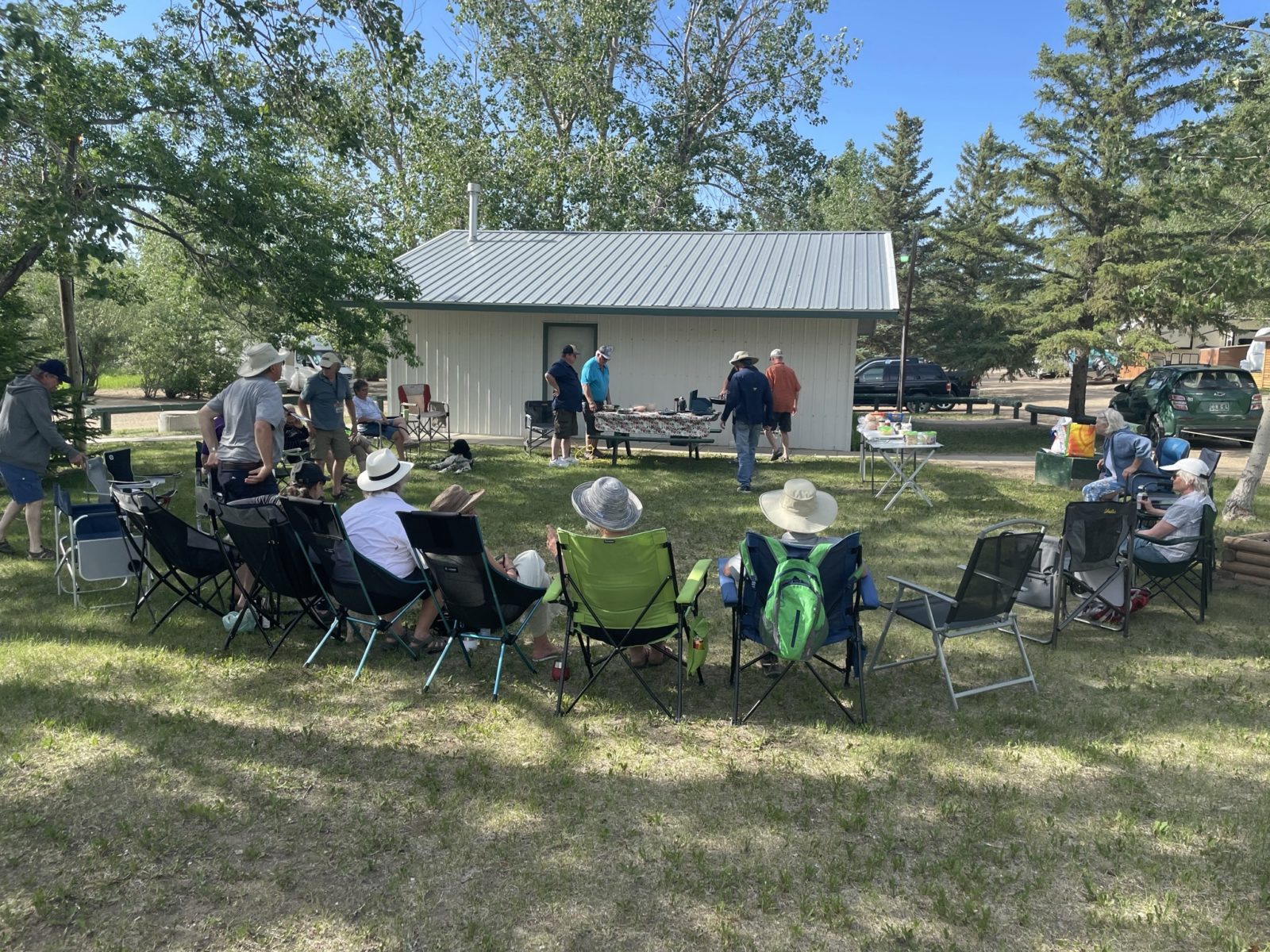 Thursday morning we woke up to rain and the rain continued until mid-afternoon. We had tours booked for our group in Gravelbourg, a small French community on the prairies. Four of our brave souls mounted their bicycles and drove the 12 km into Gravelbourg in the rain. It took about an hour because not only were they riding in rain, they were also riding into a head wind. When they got there the only restaurant in town was full so that had to go to the hotel bar were they ordered pots off hot tea and soup.

The rest of us arrived later in our vans and the tours were wonderful. We split into two groups of about 10 per group. One group went to the museum were they watched two short films about the history of the town and its school run by an order of Catholic nuns. The other group went to Our Lady of Assumption Co-cathedral. About an hour later the two groups switched so everyone who wanted got to do both tours.

The Co-cathedral opened in November of 1919. The church seats about 1500 people and the first priest assigned to it was a professionally trained artist from Lyon France. Over a period of 10 years he painted the entire walls and ceiling with beautiful scenes from the bible. The paintings have not been touched in over 100 years and they still look very good.

The Convent of Jesus and Mary operated as Thevenet College for many years until it was converted to Gravelbourg’s Elementary School. The convent was completed in 1927 and at its peak it had up to 750 students, the majority of which were women, (a graduating class picture might have two or three men and about thirty women). Besides the regular school program the college placed a lot of emphasis on art and music.

There are no students or teachers at the convent now. The convent is on the list of National Historic sites and it is currently owned by the Town of Gravelbourg and they are looking for ways to repurpose it. 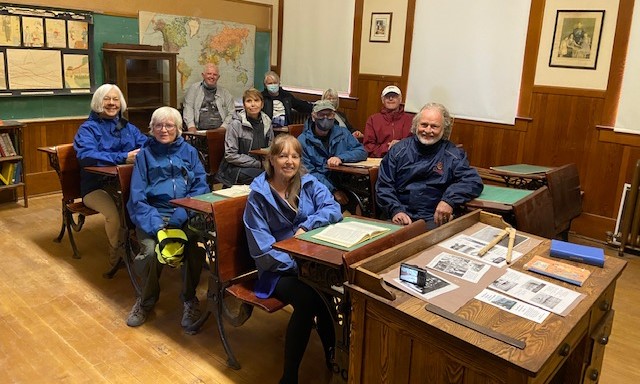 Even though a few of our vans left Thursday evening the rest of us gathered for a final evening bonfire before we packed up to go our separate ways Friday morning. I believe everyone had a wonderful time, made some new friends and are looking forward to seeing new and old LTV acquaintances at future rallies.