A Map vs A Photo 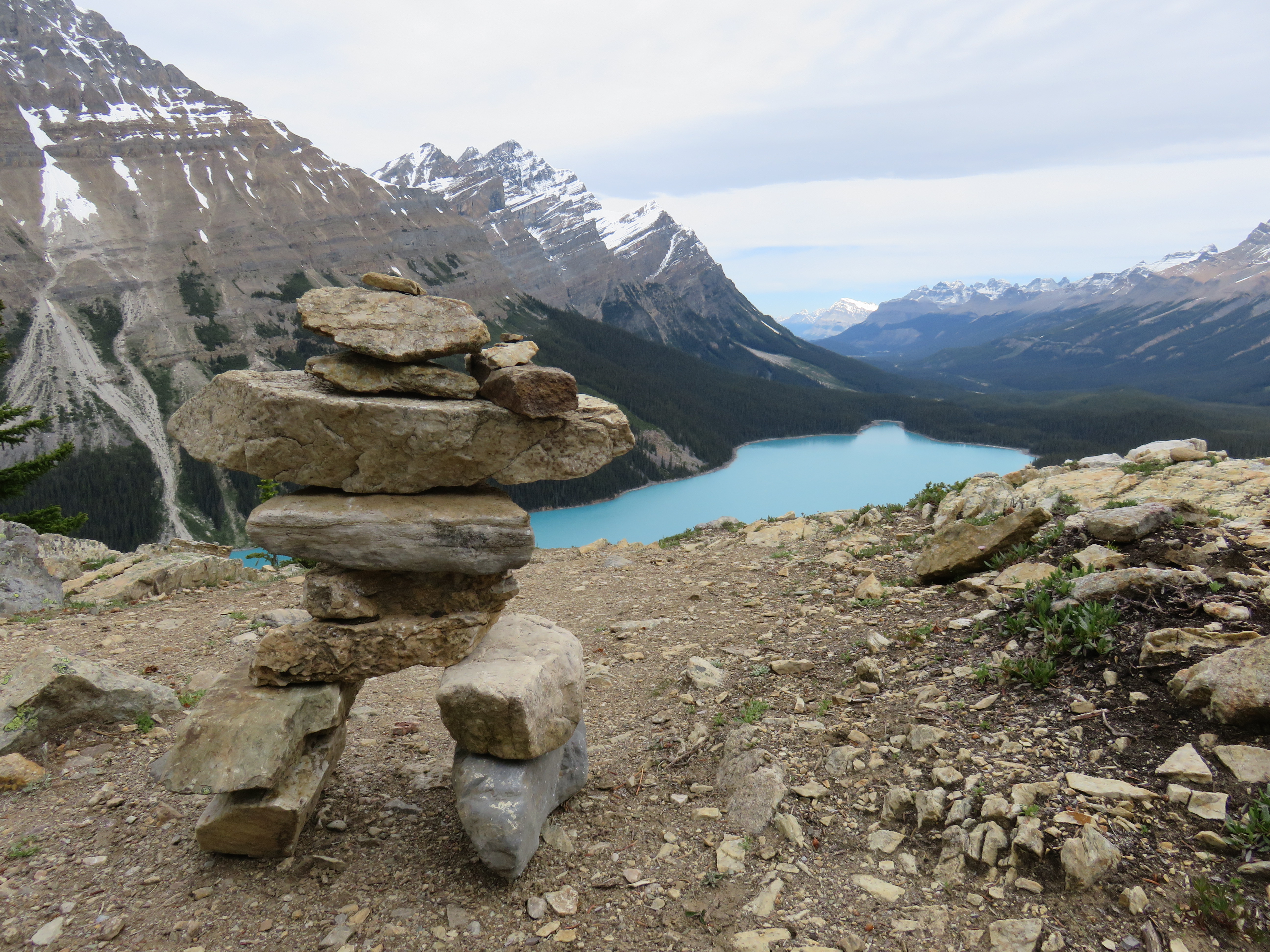 Editor’s Note: Alexandra and David are members of LTV’s sponsored content team, The Leisure Explorers. Do you own a Leisure Travel Van and enjoy writing? Learn more about joining the team.

Sometimes, all you have to work with is a map, one that shows a road as a line that will take you from here to there. In the bottom corner, you might see a legend that points to names, numbers, and perhaps some informative blurbs about vistas and scenic platforms along the way. You might get an idea of mileage, of twists and turns or elevation changes, but that’s about all, really.

As you sit at home, or at the campground, or in your RV somewhere, you might be looking at that map and planning your journey; anticipating your drive, imagining the stops you’ll make along the way. The facts, numbers and tidbits of information on the map tell one story, but what will you really see, feel, and experience?

What follows hereunder are tidbits of information we gleaned before and during our journey down The Icefields Parkway, interspersed with the photos we took – photos that confirm that, in this case, a thousand words would definitely not be enough to adequately describe the magnificence of one rather short stop along one rather long road, as depicted by the National Park’s map. 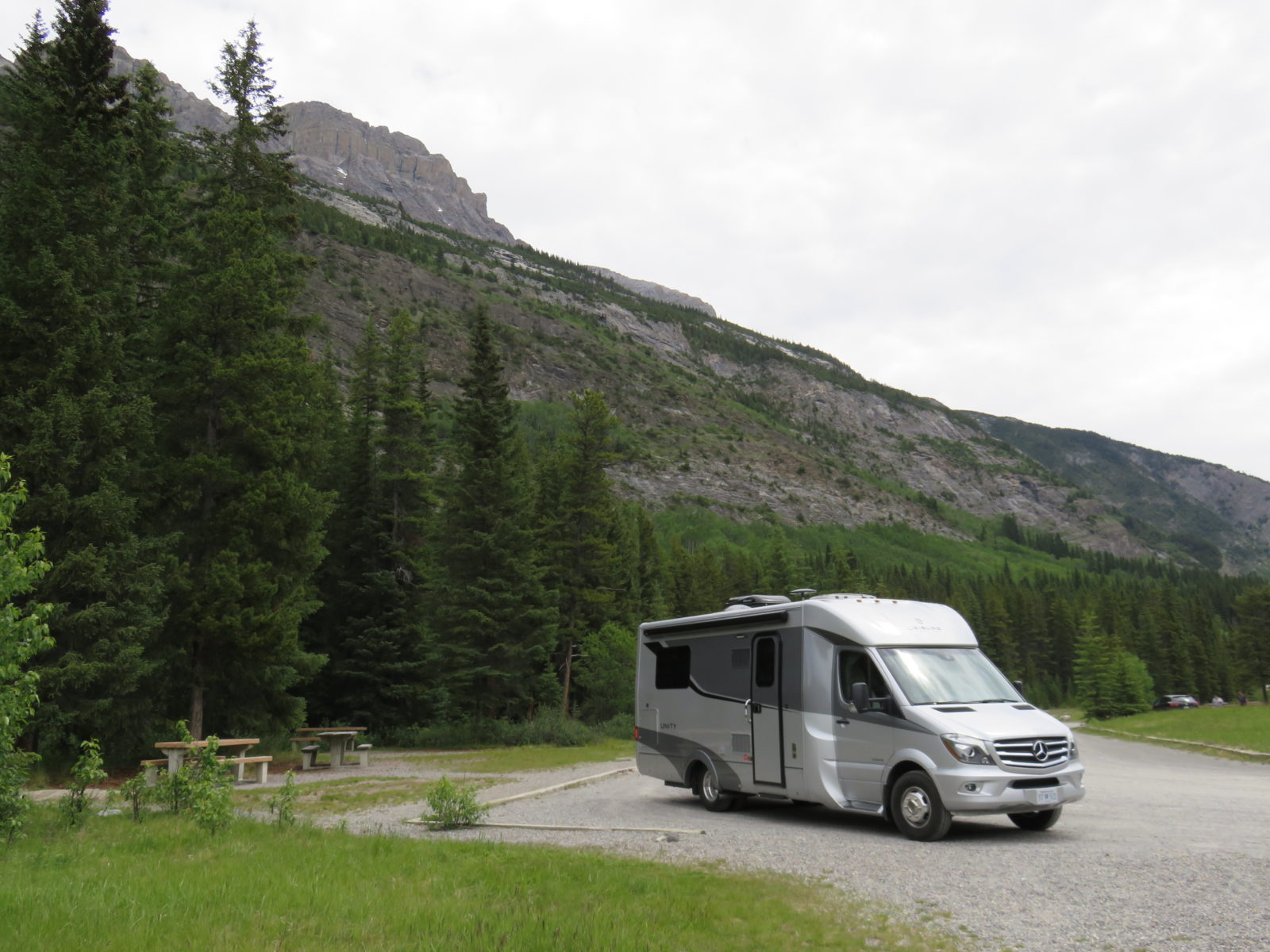 We’d been exploring the western part of North America. Geographically, we were in Alberta, Canada. Specifically, we were exploring Banff National Park, after having departed Lake Louise, where we’d recently spent a wee while. We’d walked around the lake, and then hiked The Beehive Buzz. On this day, our Leisure Travel Vans Unity IB tires happily propelled us forward, zoom-zooming along on The Icefields Parkway. 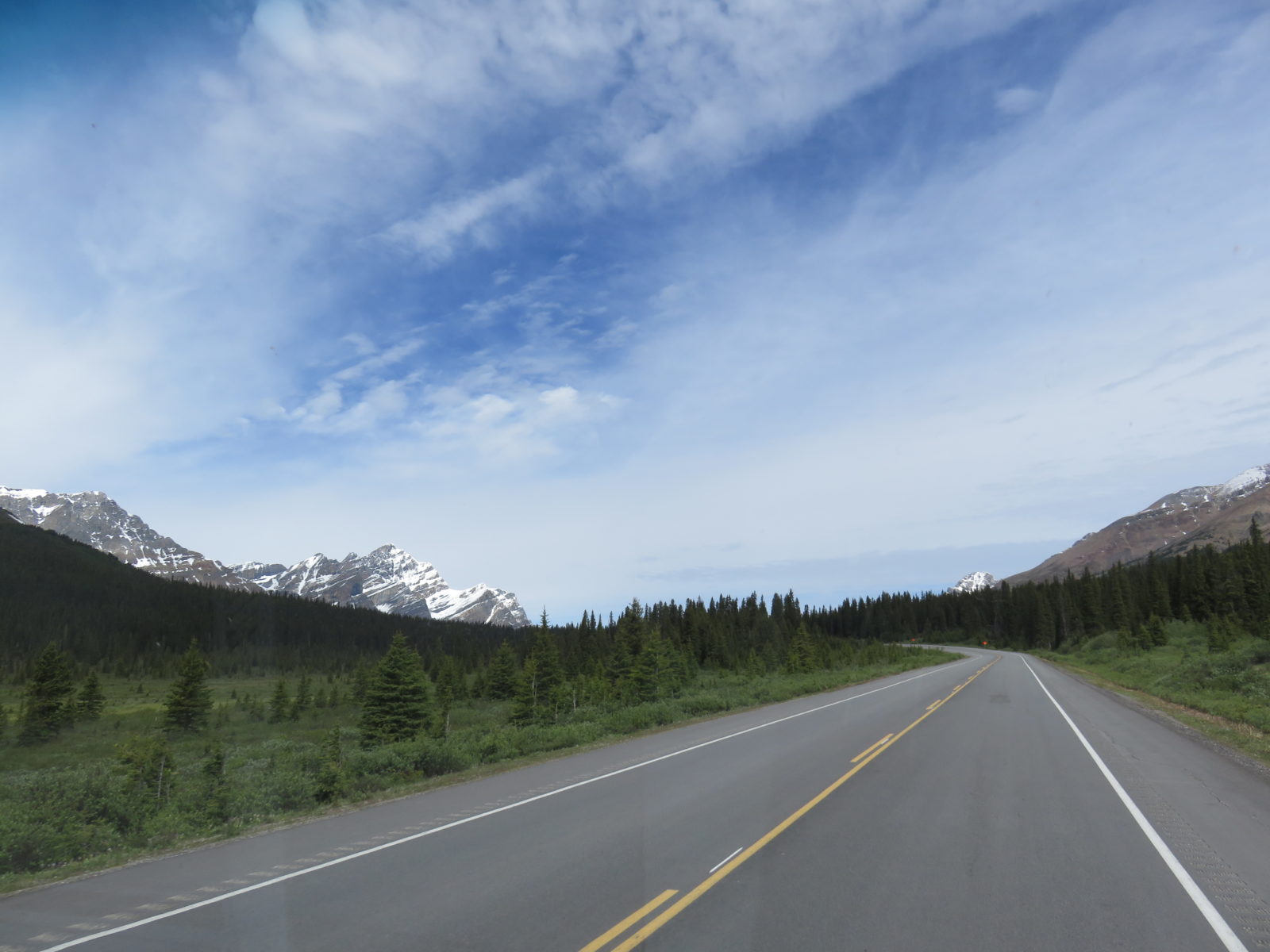 The Icefields Parkway (or Highway 93N) is rated as one of the “must-do” drives of your life. Connecting the Lake Louise hamlet with the town of Jasper, you will require a purchased park pass to drive it. The Parkway is listed as one of the most scenic highways in the world, and although we haven’t travelled the world (yet!), this is truly one of the most impressive highways that we’ve been on
(another one being our experience in The Badlands.)

The Icefields Parkway is 232 kilometres (kilometres and not miles, ‘cause we’re in Canada, eh?) of winding, curvy, twisty road located along the Continental Divide. Every single kilometre of it is pure, jaw-dropping awe. 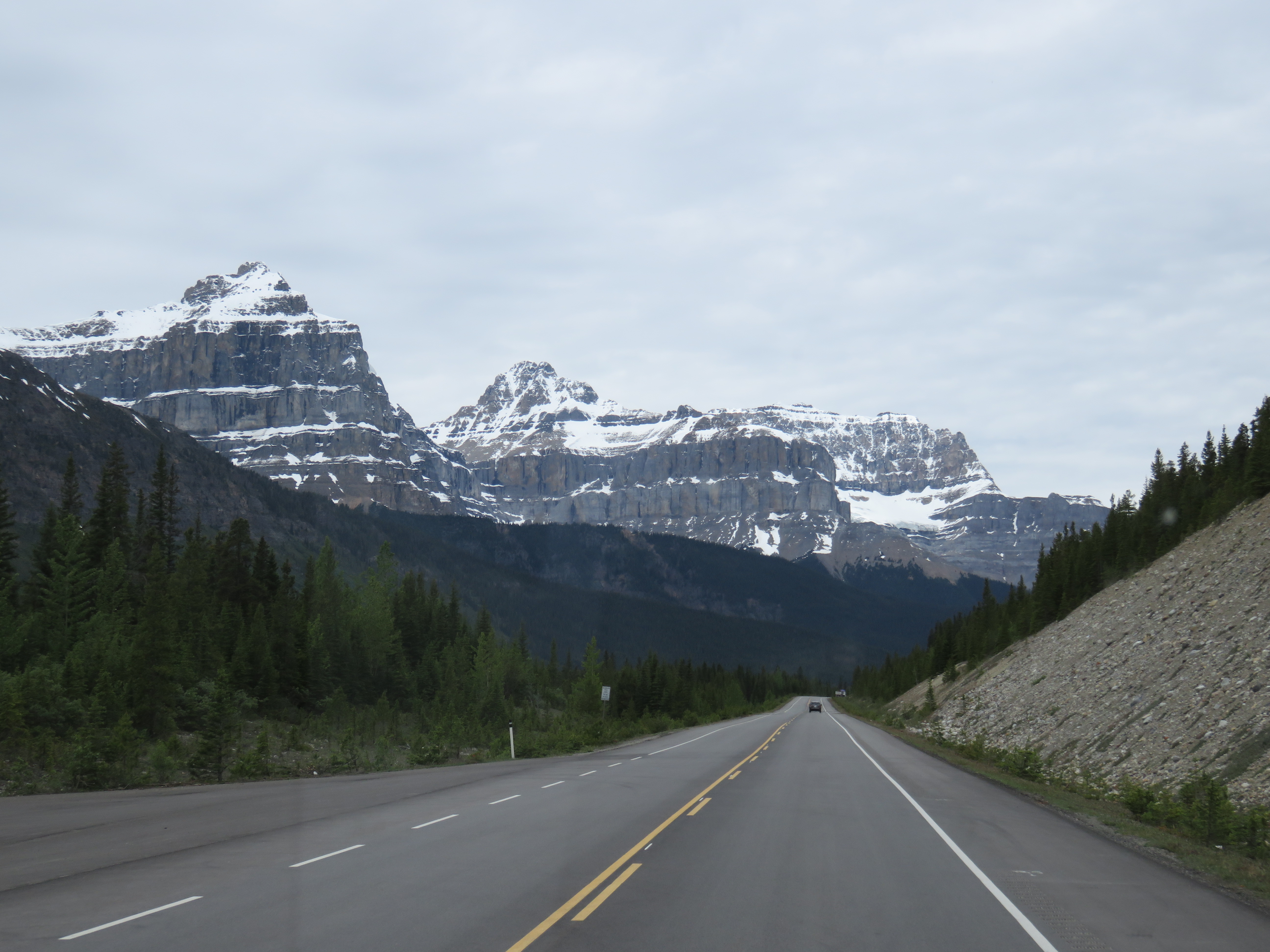 We weren’t zoom-zooming along though; the driving was slow as we paid attention to the brake lights of the car(s) ahead of us. 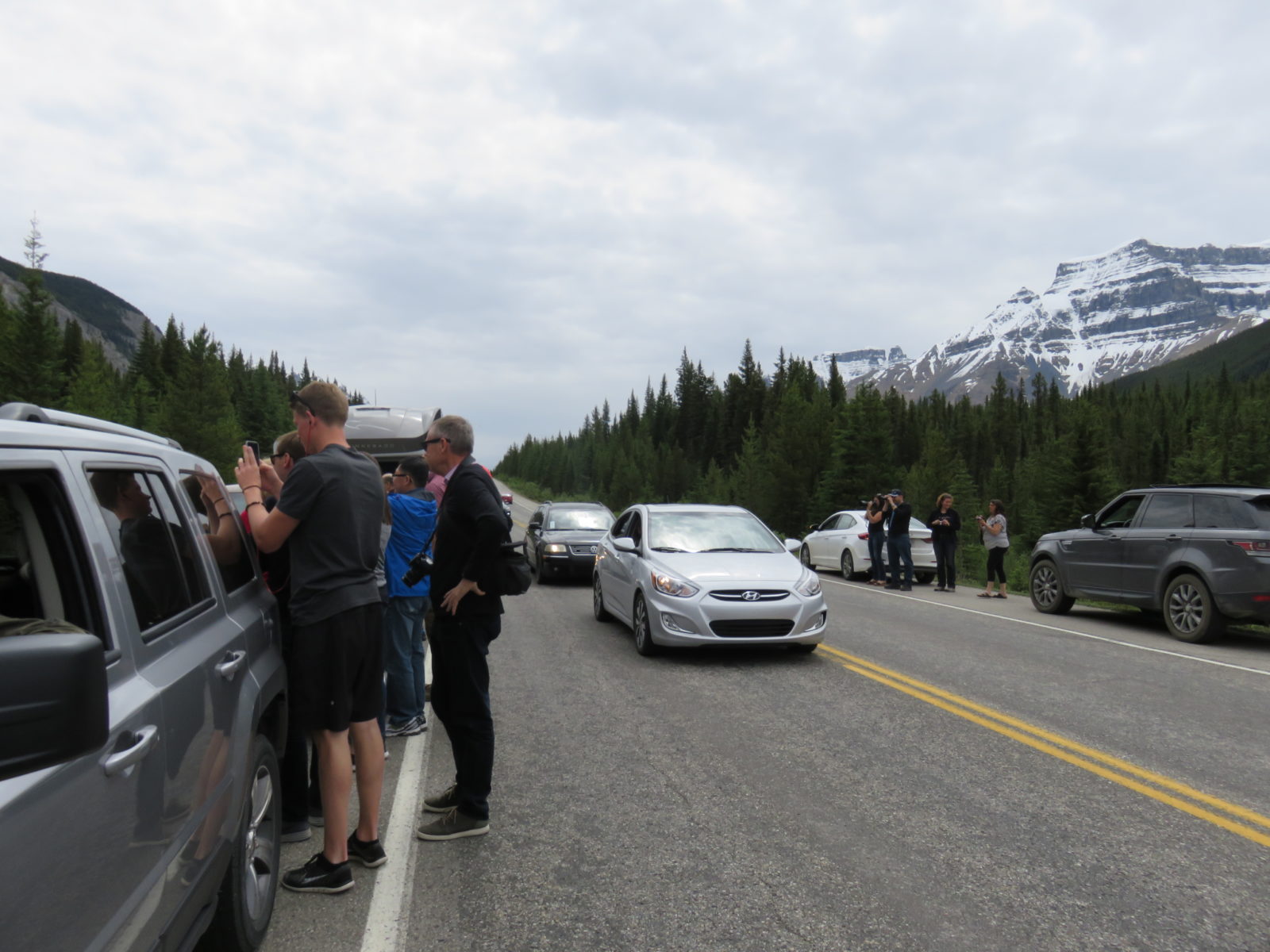 The congested traffic was due to wildlife on both sides… not necessarily the four-footed kind. Some of the more prudent drivers were pulling to the curb before getting out of the car, with camera or cell phone in hand.

Most, however, weren’t. They were slamming on the brakes in the middle of the road, simply not aware that there was an RV behind them that just couldn’t stop in record time. Thankfully, no damage was done to either party, although a few curse words were uttered along the way.

Those words, though, were quickly forgotten as we gazed in awe at the wildlife, and this time we do mean the four-footed kind. 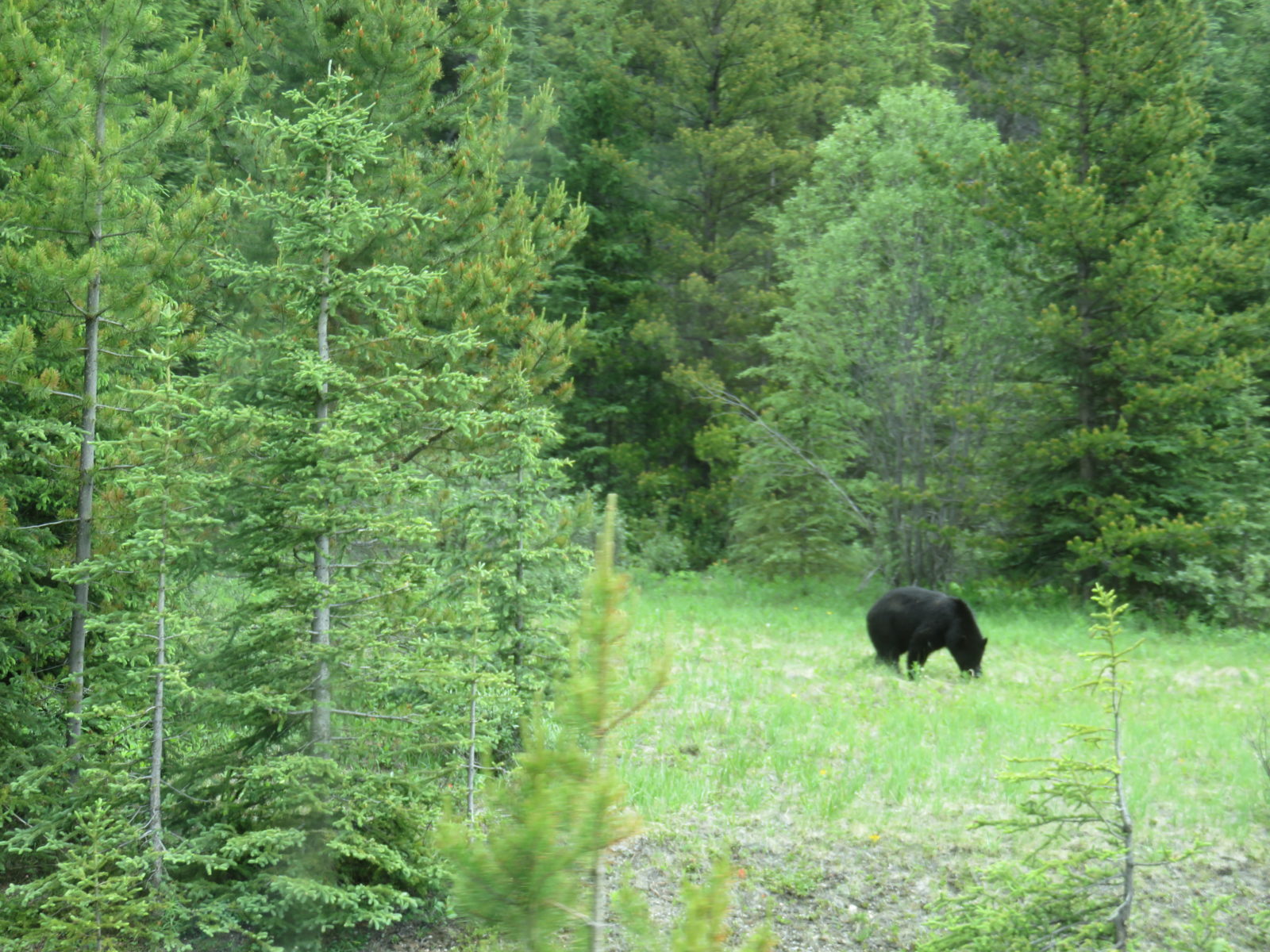 The allure of that perfect social media shot always tempts everyone too close to what we, personally, would think to be a comfortable or safe distance. Some stay behind their cars, some get a little more daring and move forward. And some were brazenly walking on the grass, to within mere feet away from these large, magnificent, yet unpredictable, animals.

We were grateful we had a camera with a bit of zoom capability. 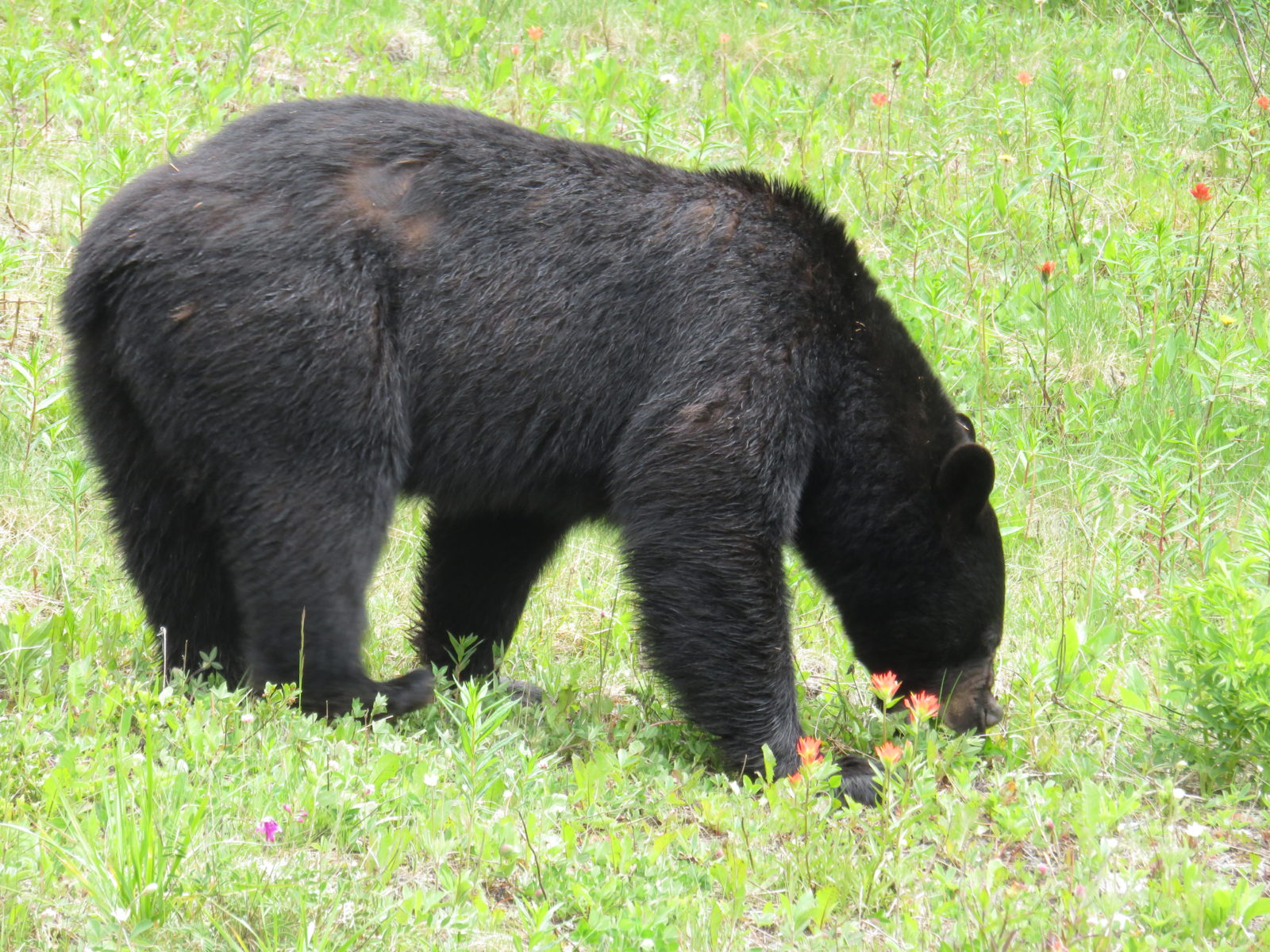 The Canadian Rockies are, in and of themselves, amazing to behold. Majestic in volume and size, we’d been spending our time mesmerized and gobsmacked at the scenery enveloping us.

The ice-capped peaks, draped with shades of grey and white glacier blankets, disappeared into the horizon ahead of us and the hazy skies above us. 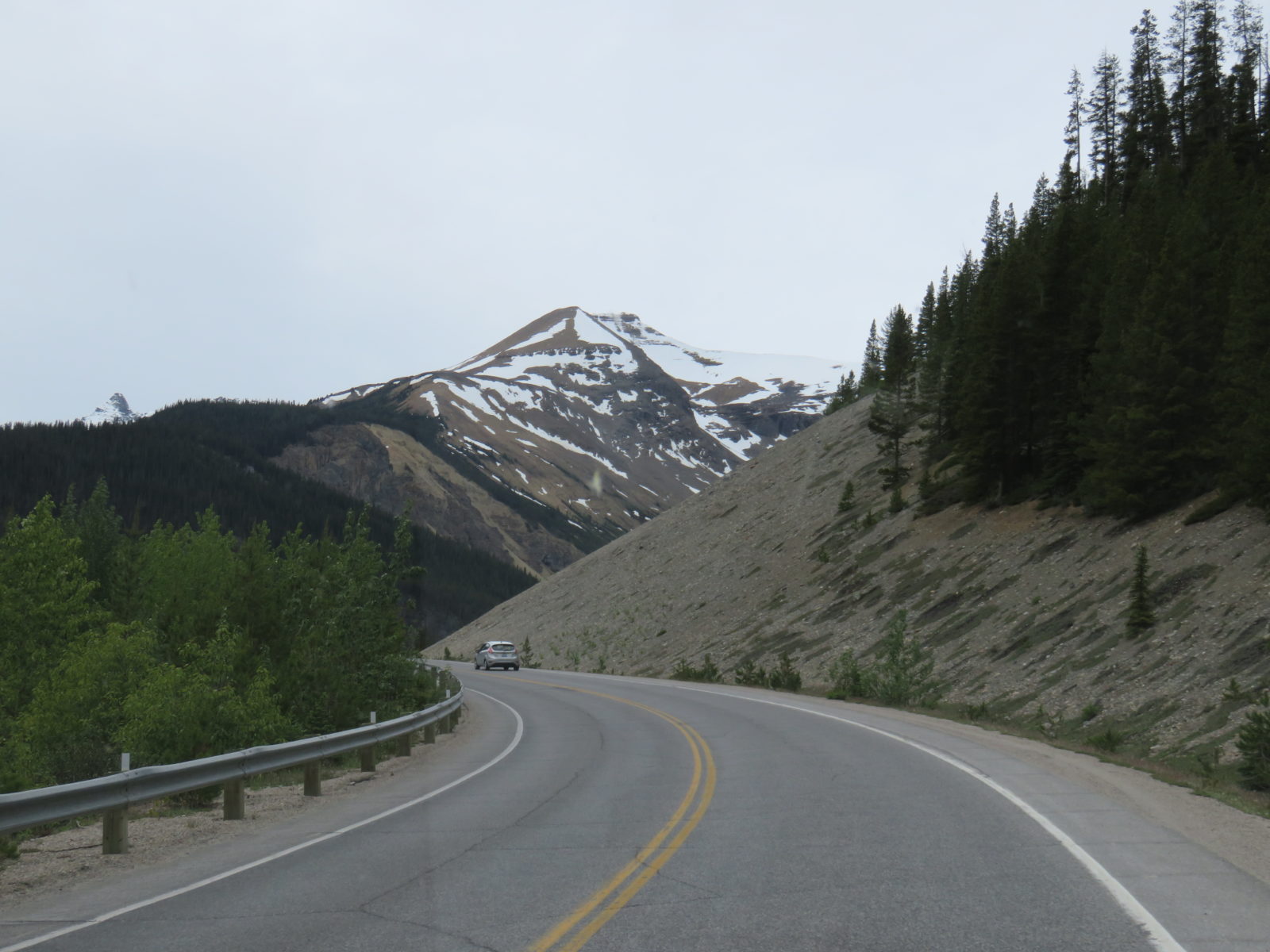 We were looking for, and planning to stop at Peyto Lake, easily found on the map, which indicated it would be located not far off The Parkway. Even without the map, we were simply able to follow the signs.

Peyto Lake (pronounced Pea-toe), is 2.8 kms long by barely 1 km wide. The lake was named after Bill Peyto, an early trail guide and trapper in the Banff area. It is a glacier-fed lake and, like many mountain lakes, is ice-cold. You might dip your fingers or toes in there, but you won’t last long if you’re going for a swim!

Peyto Lake is at an elevation of 1860 feet, between Caldron Peak, Peyto Peak, and Mount Jimmy Simpson, in the valley of the Waputik Range. Waputik translates into “white goat” in the Stoney language.

It’s only a ten-minute walk from the washroom facilities and informative signs in the parking lot to the Peyto Lake lookout. You can also walk down to Peyto Lake, which we didn’t do, but would take you from 30 to 60 minutes, if we read the National Park signs correctly. From our experience though, we knew that what goes down, must also come back up.

The signs stated that we should look for pikas and ptarmigans. A quick Google search revealed that pikas are a small mammal that lives in the mountains. With short limbs, round body, and no tail, it resembles a rabbit but with short, rounded ears. Ptarmigans are a medium-sized game bird from the grouse family. We were anxious to catch a glimpse of both.

However, these are all facts, information that we learned as we stood there reading the informative panels. In reality, we headed up the trail for the short, uphill climb, and were rewarded with vistas and views that will not soon be forgotten. 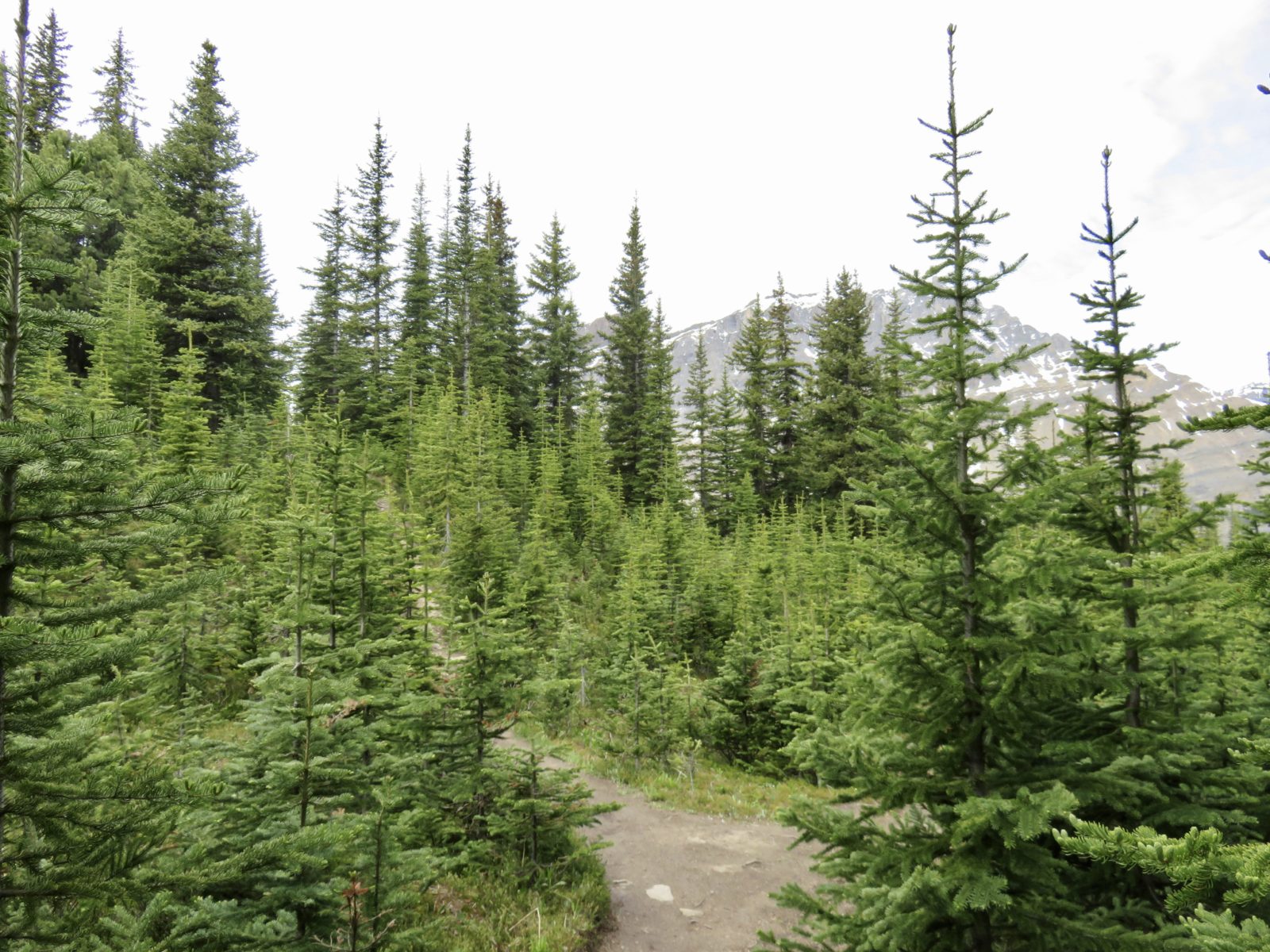 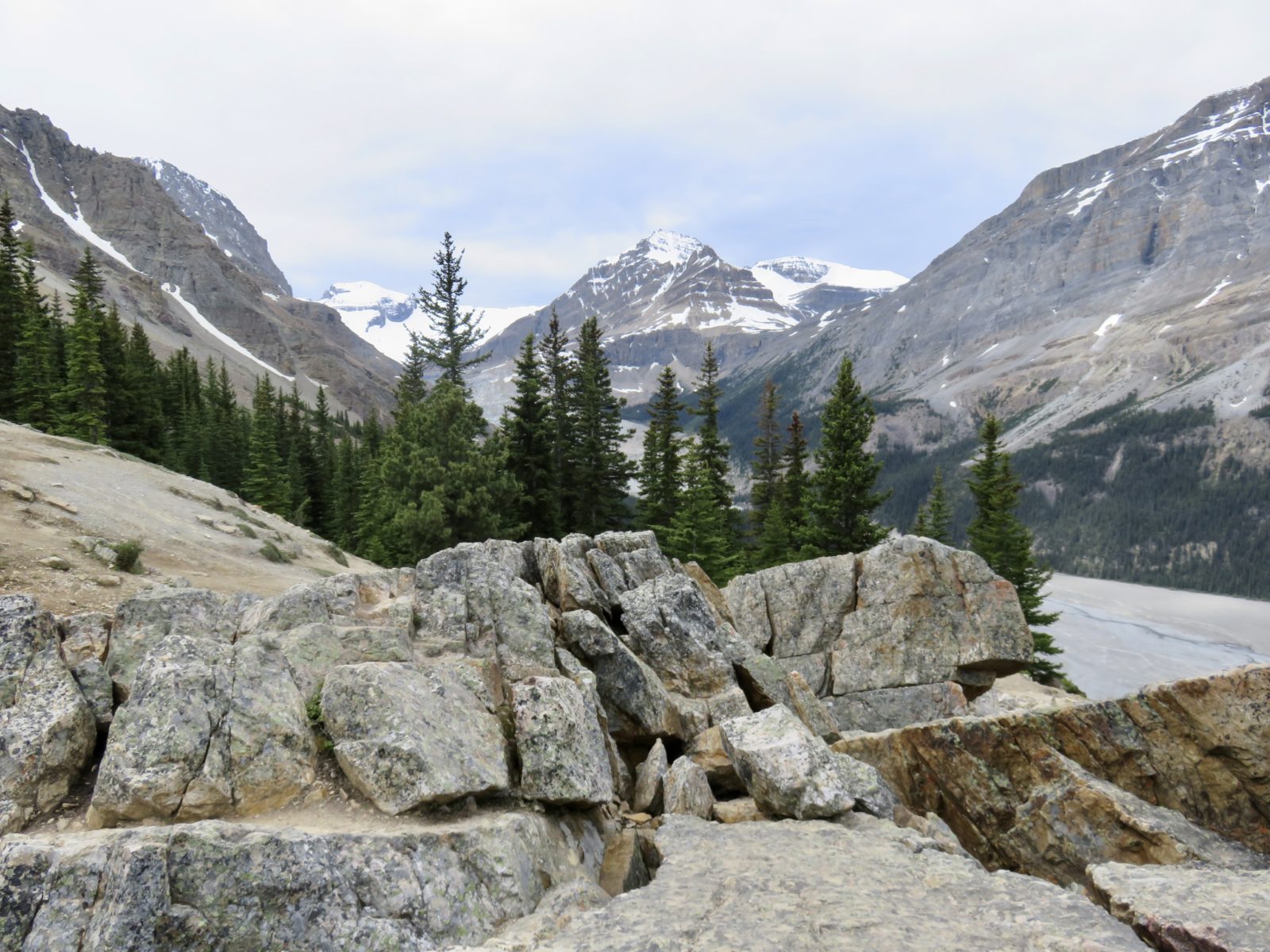 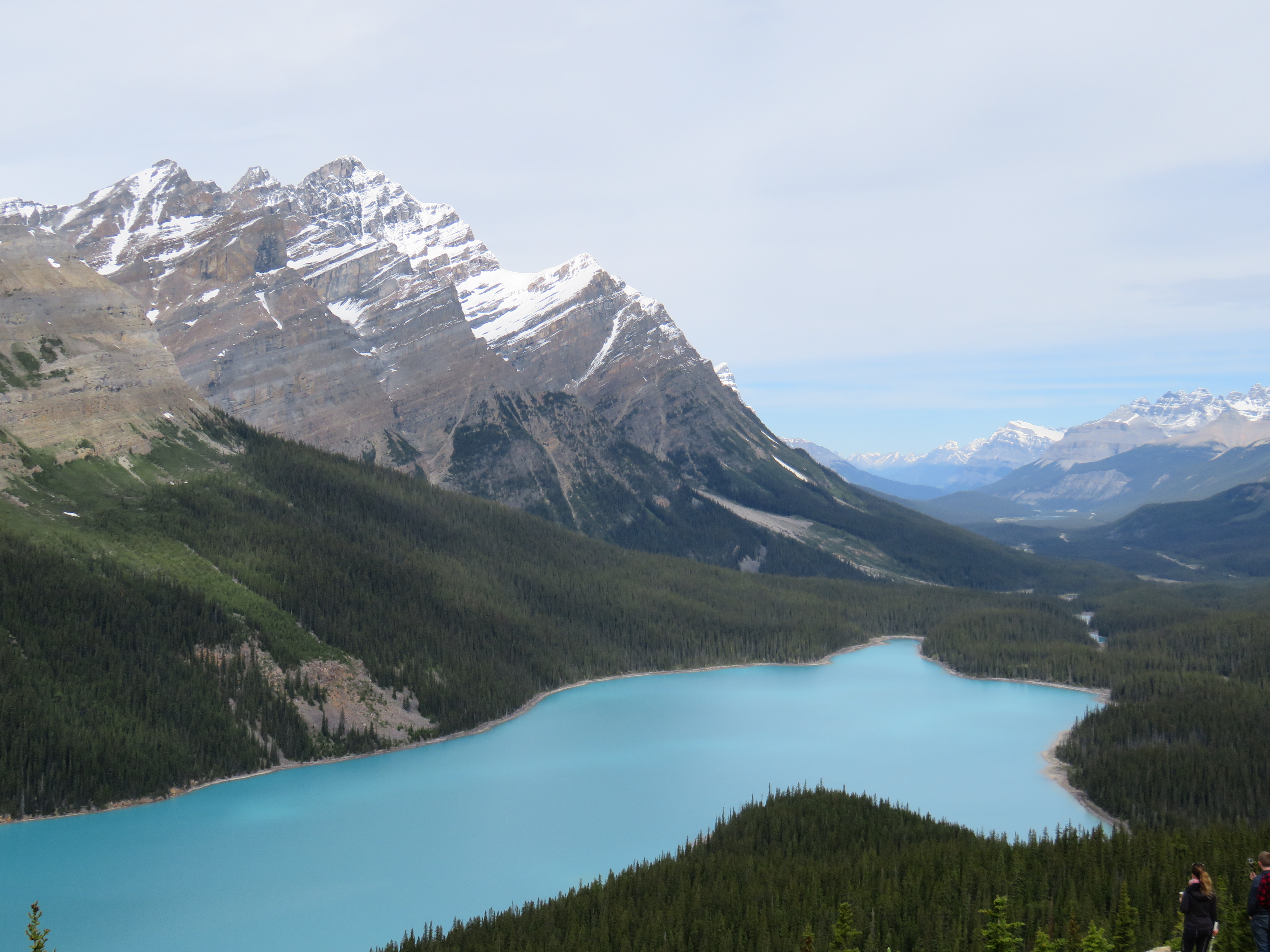 The lake looked surreal, almost like it was painted there in shades of minty green toothpaste. Its colour is the result of rock flour. Over time, the movement of rocks and boulders creates fine particles that eventually making their way downstream and into the lake, where the sediment refracts the light and gives the water these unique and vivid colours.

It may look like a painting, but it is all very real. We saw beautiful flowers along the way, like this western anemone, also called a pasqueflower. It doesn’t seem possible that this beauty could grow in these gravelly conditions, the white flower petals on what looks like a furry, cactus-type stalk. Interestingly enough, the stems and seeds of the plant can be used in analgesics and sedative types of herbal medicines. 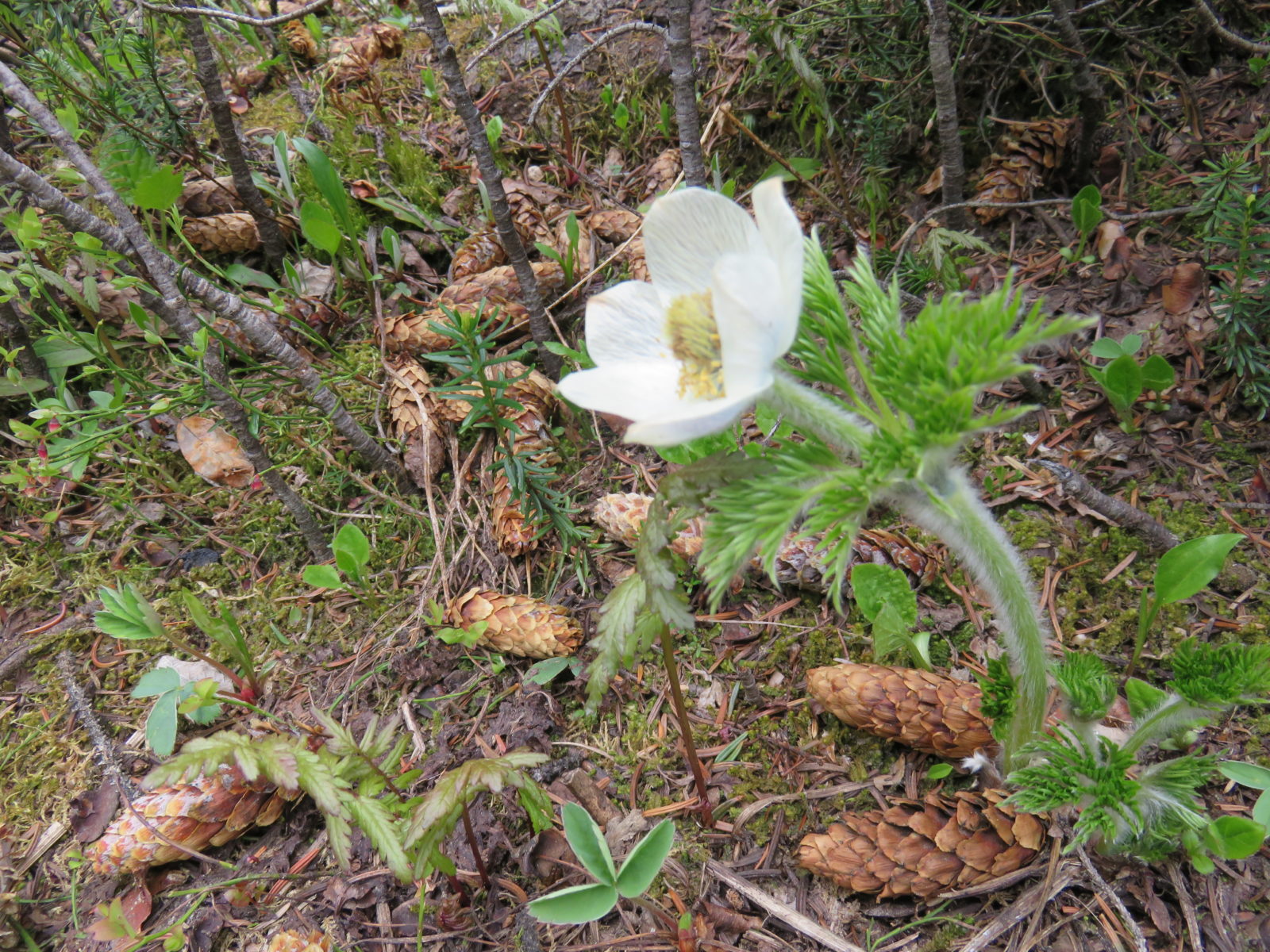 We didn’t spot any strange fowl (aka ptarmigans), but we believe we caught sight of the elusive pika nearby, as curious about us as we were about them. 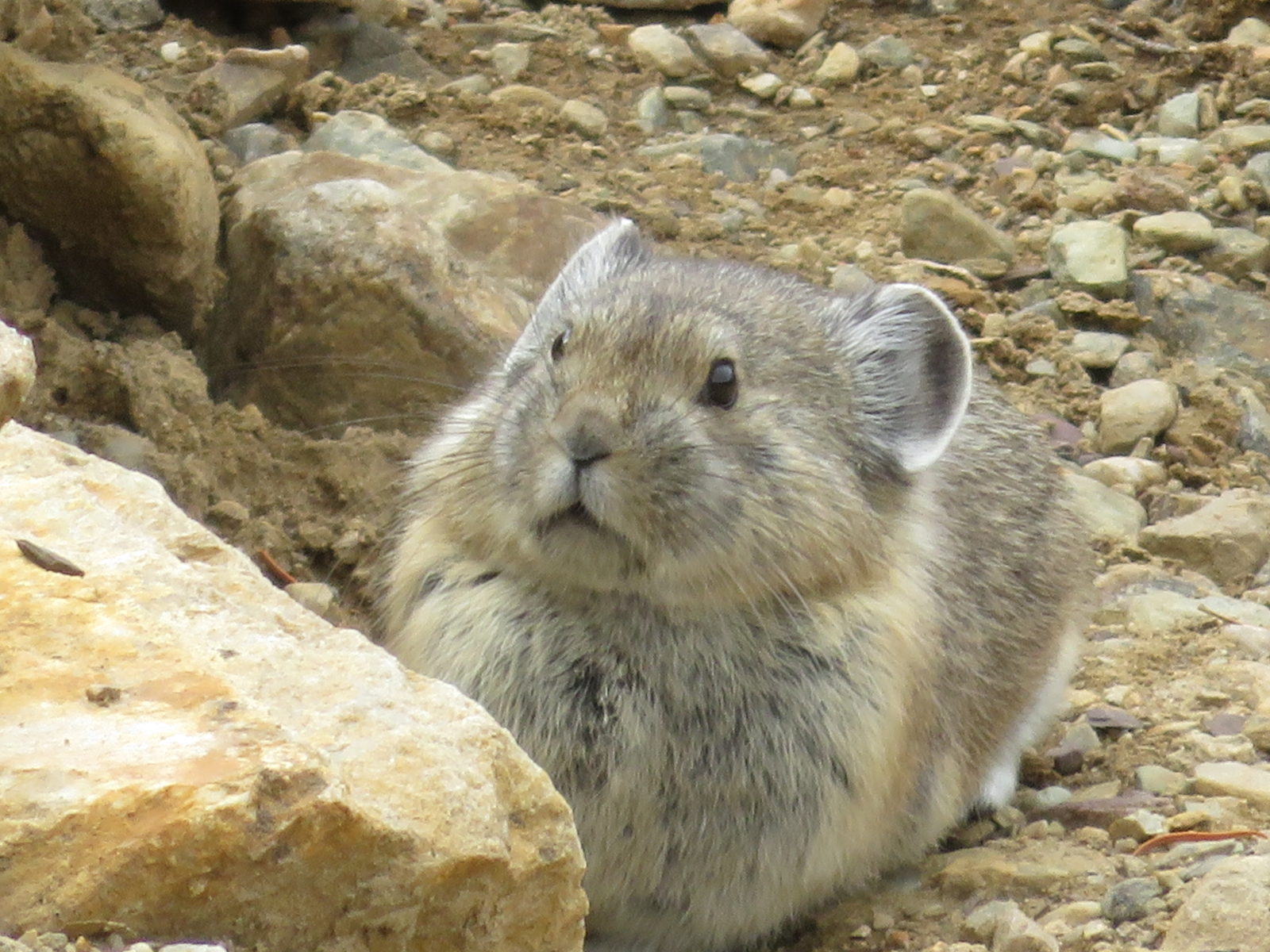 And of course, the brazen chipmunks were coming out to say hello, quite possibly looking for food. We were kind of wishing we had something to eat ourselves! We were disappointed, yet rather relieved, that we didn’t see any large wildlife along the way. However, evidence that they walked the trails we were walking at some point or other lay on the branches everywhere, and we wondered if the furry remnants came from the white goats that this area was named after. We opted to take the trail a little further, as sitting in an RV, driving kilometre after kilometre, sure makes you want to stretch your legs for a tad longer than just a few minutes, even if it is uphill. We were conscious that we didn’t have our backpacks, complete with water, snacks, and first aid kits, with us, so we didn’t want to roam too far. But it wasn’t our lack of preparedness that stopped us in our tracks – it was vistas like these. 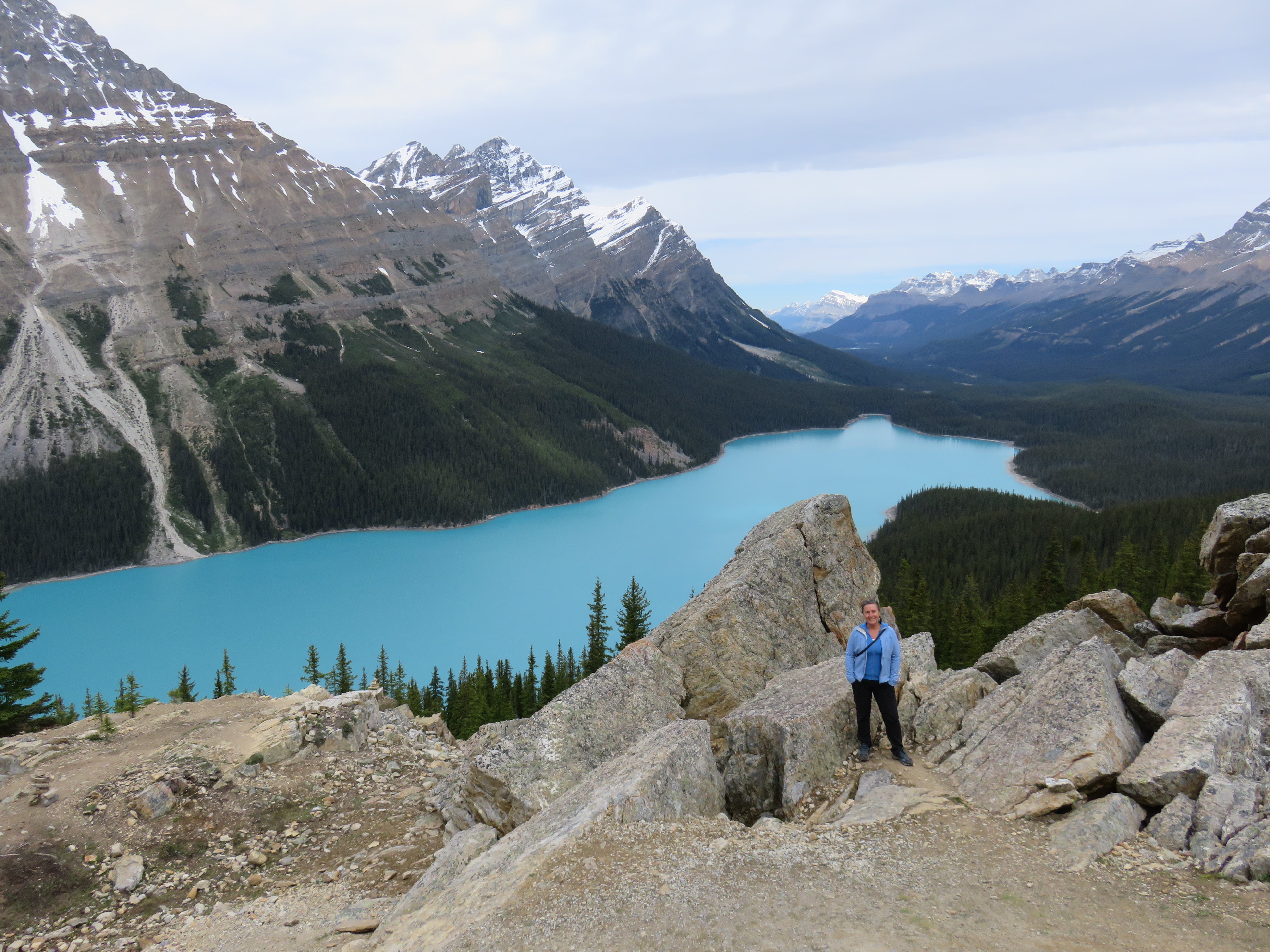 We kept berating ourselves for not having brought our good camera, so the photos you’re seeing are from our cell phones. 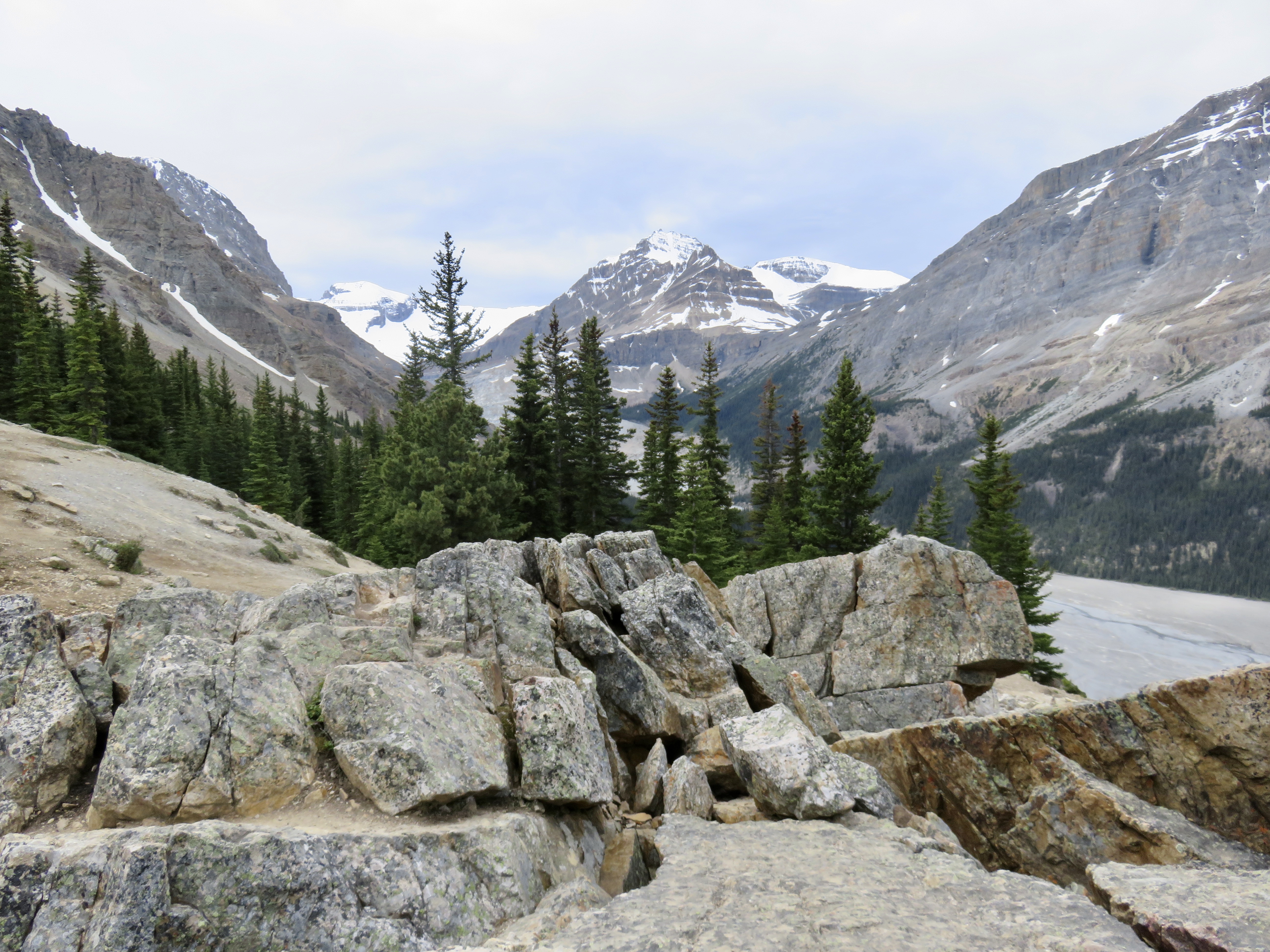 What an incredible stop along a road that, on paper, didn’t reveal much of anything. Who knew you could get all this from a “map”, eh?