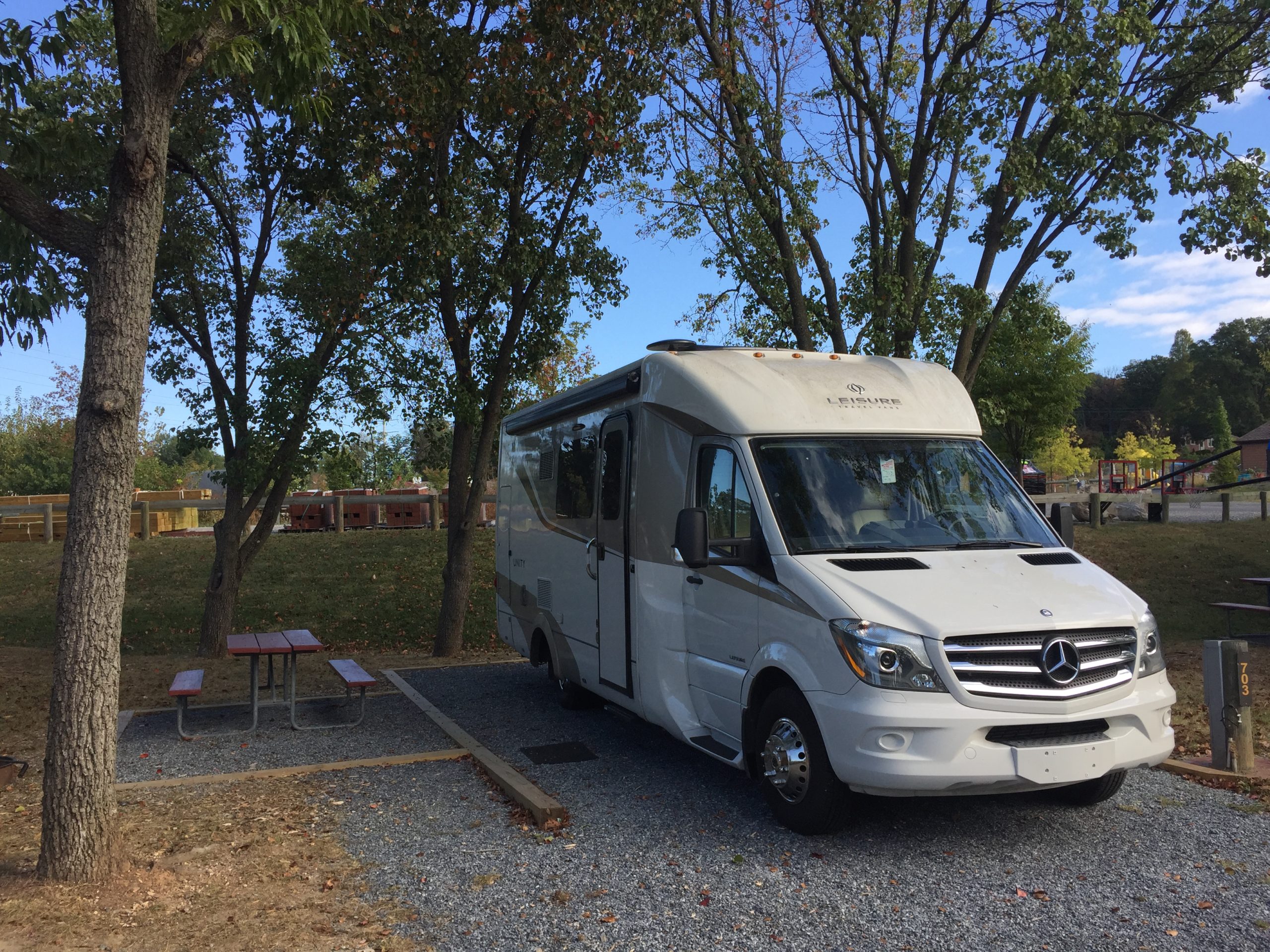 Honoring Heroes, Remembering Our Past

DC had been waiting on our bucket list of cities to visit for several years. If you haven’t been there yet, it should be on yours, too. We took Lucky Us, our 2015.5 LTV Unity MB, for an October visit, hoping to avoid the spring cherry blossom crowds and the summer family vacationers.

First, a few tips and common misconceptions for those who have not visited this city:

Friends who had recently visited DC recommended Cherry Hill Park in Maryland, billed as the closest campground to the Capital. We planned to stay four nights, leaving on the fifth day to see Mount Vernon. Cherry Hill Park provides resort-like amenities, including a pool, café, clubhouse, and more. A daily orientation held at the Park can help you figure out how to negotiate the bus and Metrorail. If you don’t have time to go to the orientation, be sure to get clear directions at the campground bus stop from staff about which bus to take home. Not that we took the wrong bus once, but… we know you will not only pick the right bus, but will also pay attention to the direction the bus is going. 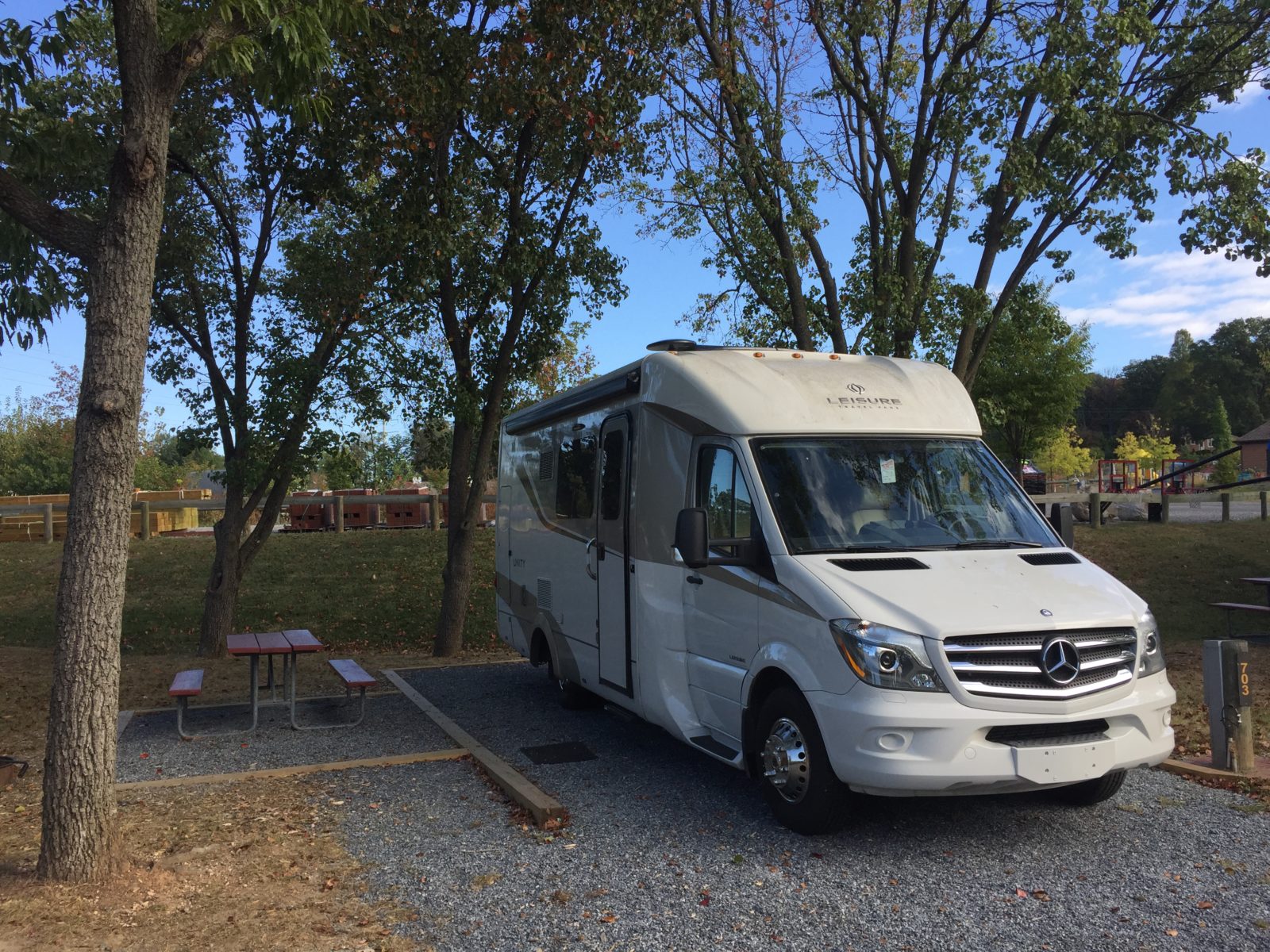 Our site at Cherry Hill Park.

Buy your SmarTrip Card at the campground’s bus stop, where a helpful staff person is available to answer your questions. A local bus stops here throughout the day, which brings you to the College Park Metro Station. The 25-minute bus ride costs $2 per person or $1 for seniors each way, and children under five ride free. Once you get to the College Park Metro Station, take the green line in to DC. If you didn’t buy your SmarTrip Card yet, you can buy one at the station. Typically the entire trip from the campground to the city will take about one hour.

We boarded an early morning bus at the campground, armed with our SmarTrip Cards and map handy; a backpack on Bill’s back carried our water bottles. Once we arrived, it was just a couple of blocks to start our day at the National Mall, look for a bus stop, and get on the DC Circulator. At just $1 per ride, the Circulator bus system offers six routes across city, going as far as Rosslyn, Virginia. We, of course, were only interested in the route that circles the National Mall.

The centerpiece and most well-known part of the Vietnam Veterans Memorial is the two black granite walls inscribed with more than 58,000 names of men and women who died in service in Vietnam/Southeast Asia. Also within the 2-acre site is the Three Servicemen statue and the Vietnam Women’s Memorial. Together, these three elements honor service members of the Armed Forces who fought in the Vietnam War, those who lost their lives, and those who went missing. Watching the visitors was just as moving as looking at the overwhelming array of names. Old, young, and in-between, many wore caps declaring their own service. Even more stirring were the groups of older veterans and their volunteer helpers who had traveled to see this and other memorials.

Located at the west end of the Reflecting Pool within the National Mall, the Lincoln Memorial honors the 16th president of the United States.

Lincoln’s Gettysburg Address, etched into the wall to the left of the statue, will inspire you just as it did Americans in 1863. To the right is Lincoln’s Second Inaugural Address, given just months before his death.

Devoted to documenting the richness and diversity of African American life, the Smithsonian National Museum of African American History & Culture features exhibitions about slavery, the Civil Rights Movement, the arts, athletics, and more. More than 3,500 artifacts are on view, including training aircraft used by the Tuskegee Airmen, an invitation to President Obama’s 2009 inauguration, and a red jumpsuit with vest worn by James Brown.

We started Day Two with a visit to the National Archives Museum, where we entered the dimly lit Rotunda for the Charters of Freedom to view The Declaration of Independence, the Constitution, and the Bill of Rights, instrumental to the founding of the United States. No photography is allowed of these documents, which are guarded and protected under glass.

The National Gallery of Art boasts more than 141,000 paintings, prints, drawings, photographs, sculpture, decorative arts, and new media that traces the development of Western art from the Middle Ages to the present. Its outdoor Sculpture Garden invites you to wander among a variety of inspiring works.

National Museum of the American Indian

You may find one museum that totally mesmerizes you. For us, this was the one. We spent almost the entire third day at the Smithsonian National Museum of the American Indian, which, along with sister museums in New York City and Suitland, Maryland, cares for one of the world’s most expansive collections of Native artifacts covering not only North America but the entire Western Hemisphere, from the Arctic Circle to Tierra del Fuego. Traditional crops of corn, beans, and squash, along with grasses, wildflowers, forest trees, and wetlands, make up the native landscape that welcomes you inside the thoughtfully planned interior, all designed in collaboration with tribes and communities from across the hemisphere, giving you a sense and spirit of Native America. Exhibits will grab your heart as you retrace the Trail of Tears as well as little-known stories of people uprooted from their native lands. Stop for lunch downstairs at the Mitsitam Cafe to try some Native foods like fry bread or a buffalo burger.

With thousands of objects on display, including the 1903 Wright Flyer and Neil Armstrong’s Apollo 11 spacesuit, exhibition galleries at the Smithsonian National Air and Space Museum cover the history of aviation, spaceflight, astronomy, and planetary science.

The Franklin Delano Roosevelt Memorial chronicles FDR’s four terms in office through 22 quotes carved in red South Dakota granite walls. Bronze artwork depicts FDR, Eleanor Roosevelt, and Fala, their beloved dog. Through this memorial, you can sense the challenges he encountered as he led the United States during the Great Depression and World War II.

“The ultimate measure of a man is not where he stands in moments of convenience and comfort, but where he stands at times of challenge and controversy.” This is just one of 16 quotes chiseled into the granite blocks at Martin Luther King, Jr. Memorial.

We found the United States Botanic Garden a welcome change of pace as we began our last day. This living plant museum, envisioned by George Washington more than 200 years ago to demonstrate and promote the importance of plants to a young nation, is one of the oldest botanic gardens in North America. Outdoor paths take you along the rose and butterfly gardens within the National Garden.

No visit to DC is complete without a tour of the U.S. Capitol, one of the most iconic symbols of the American people and our government. We didn’t recognize anyone notable eating lunch in the Capitol Cafe before our afternoon tour, which included visiting the the Crypt, the Rotunda, and National Statuary Hall. The sculptures, paintings, and building design make this one tour not to miss.

Although there was much, much more we could have seen and done during our DC trip, four solid days of commuting to the city and sightseeing filled our quest to experience our nation’s Capital – for now.

Starting out from our home state, Michigan, we routed our trip to Flight 93 National Memorial in Shanksville, Pennsylvania. Once an open field, this is the crash site of United Airlines Flight 93, one of four planes highjacked by Al-Qaeda terrorists on the morning of September 11, 2001. The visitor center, shaped in the plane’s flight path overlooking the crash site, begins your somber visit to a place memorialized by artifacts, oral histories, and personal stories of the crew members and passengers, as well as the terrorists who overtook the plane. The National Park Service has collected more than 750 oral histories from individuals with a direct connection to Flight 93.

Enter the solemn atmosphere of the visitor center to learn about the actions of the 40 passengers and crew aboard, who stopped the attack on the U.S. Capitol, as well as how the United States searched for evidence to link the terrorists to this tragedy. One of the most stirring experiences is listening to a few voicemails left by passengers to their loved ones.

Just some 30 miles from Cherry Hill Park, we knew our trip would not be complete without a visit to George Washington’s Mount Vernon. Operated by the Mount Vernon Ladies’ Association of the Union, this was one venue where an admission fee is required. George and Martha Washington’s home, one of the most iconic 18th-century homes in America, overlooks the Potomac River. Nearby Pohick Bay Regional Park in Lorton, Virginia, provided a convenient night’s stay.

Experience the places and stories of visionaries, heroes, and everyday people who together contributed to the world we know today. Connect with our nation’s history in Washington DC – it has many stories to tell.