Across America at the Speed of a Bicycle

Wednesday, May 1, 2019, Heceta Beach near Florence, Oregon. I clipped into my bicycle pedals and started riding. My wife, Toni LeBel, climbed into the driver’s seat of our 2019 LTV Unity and started driving. Our goal: to reach Nantasket Beach outside of Boston, Massachusetts, 3,400 miles away, on the Fourth of July.

I had wanted to bicycle across the country for at least ten years. I’ve bicycled on and off all my life, but when a friend sent back pictures of his own cross-country ride, I was motivated to see an entire slice of the country at the speed of a bicycle. The opportunity came in 2019 after I retired from my position as an attorney with The Walt Disney Company.

Toni signed on to drive a support vehicle so I could follow a route of my choosing and take time to engage with the places I visited and the people I met. And Toni, tapping into her passion for people, decided to seek out conversations wherever we went; we had shirts, caps, and signs made that let people know we were seeking “Conversations Across America.” 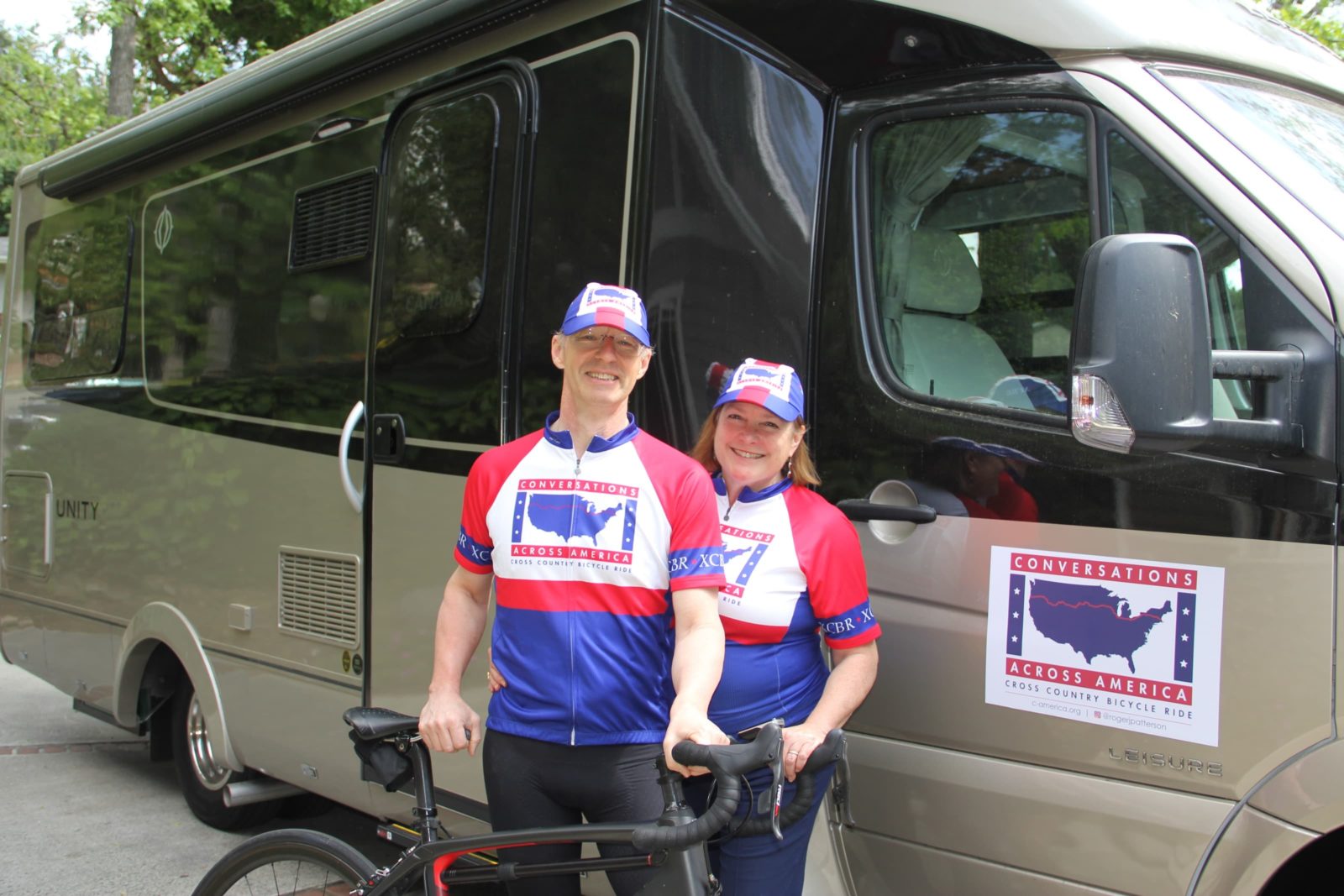 To give us the freedom to take our time, follow the route we wanted, and have the comfort of a home on the road for over two months, we decided to buy an RV. A neighbor had a Leisure Travel Van, and the bicycle rack on the back was a sign that it was made for our trip. We took a closer look at LTVs at a local RV show, and were immediately drawn to the elegant appearance and utility of the Unity Twin Bed model. We barely looked at other models and ordered our vehicle a few days later.

Many miles of cycling around our home in Southern California followed, as I prepared for the average 70 miles a day I expected to ride during the trip. Training was mixed with long hours scrutinizing Google Street View to find roads congenial for bicycling. In March, Toni and I took a couple of shake-down trips to get used to the ins and outs of travelling by RV. In late April, we drove to Oregon to begin the ride.

We started from Heceta Beach on a clear, cool morning, joined by Toni’s brother Bruce and his wife Ellen, who each rode parts of the first two days with me. I knew the Cascade Mountains from earlier trips and welcomed a return to the beauty of their forests, streams, and snow-capped peaks. 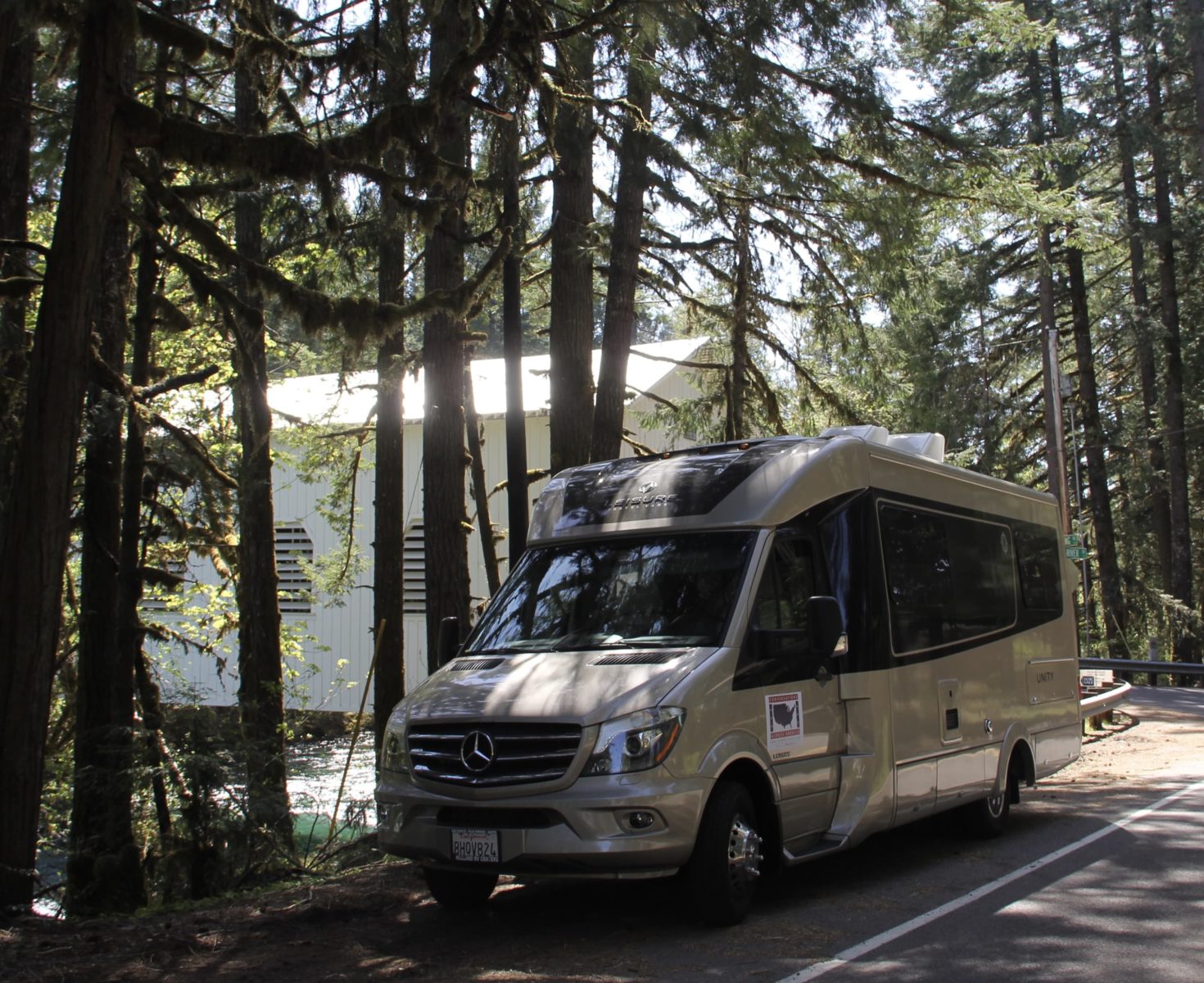 Our route across central and eastern Oregon opened my eyes to the variety and beauty throughout Oregon as I enjoyed the open spaces of the high desert, the green of spring, and the quiet forests of the eastern ranges.

We crossed into Idaho a week into the trip and spent a few days in Boise. There we visited friends who had moved to Boise from Southern California, and they introduced us to the bicycle-friendly city, some of their cycling friends, and one of Boise’s fine breweries.

We left Boise a few days later and spent days crossing the open grasslands of the Northern Plains. Days of crossing the plains may sound dull, but at 15 to 20 miles an hour you have the luxury of watching seemingly monotonous landscape change mile by mile. Here the grasslands are open and flat, there the sagebrush covers rolling terrain that shelters occasional stands of trees; here the Snake River runs next to the road, there the nearby mountains provide a majestic backdrop.

And then there are the barns. On a whim, I took pictures of a few barns during the first two days of the trip and included them in my daily Instagram/Facebook posting. Friends loved the barns. They asked for more, and I found photo-worthy barns every day. From the stately to the simple; from newly painted to faded and leaning over. I ended up creating a whole series of posts titled Barns Across America. 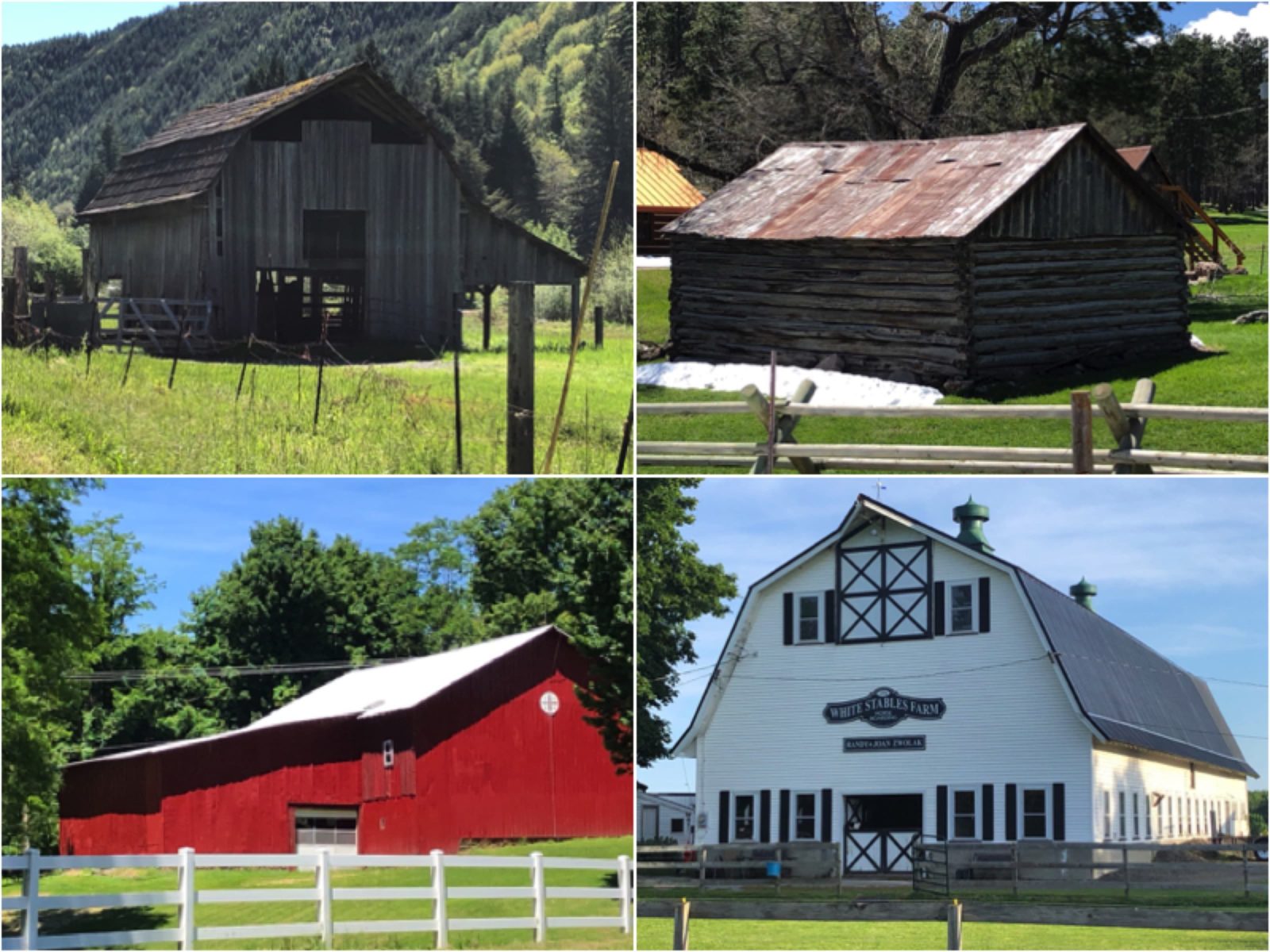 After Idaho, we enjoyed a planned break for a few days near Jackson, Wyoming. As we were about to head east from there, snow was forecast to fall on four of the next five days, up to a foot of it in Togwotee Pass where we had planned to cross the Continental Divide. Neither the bicycle nor the Unity were up to that challenge, so we drove south to Boulder, Colorado, and waited out the weather. 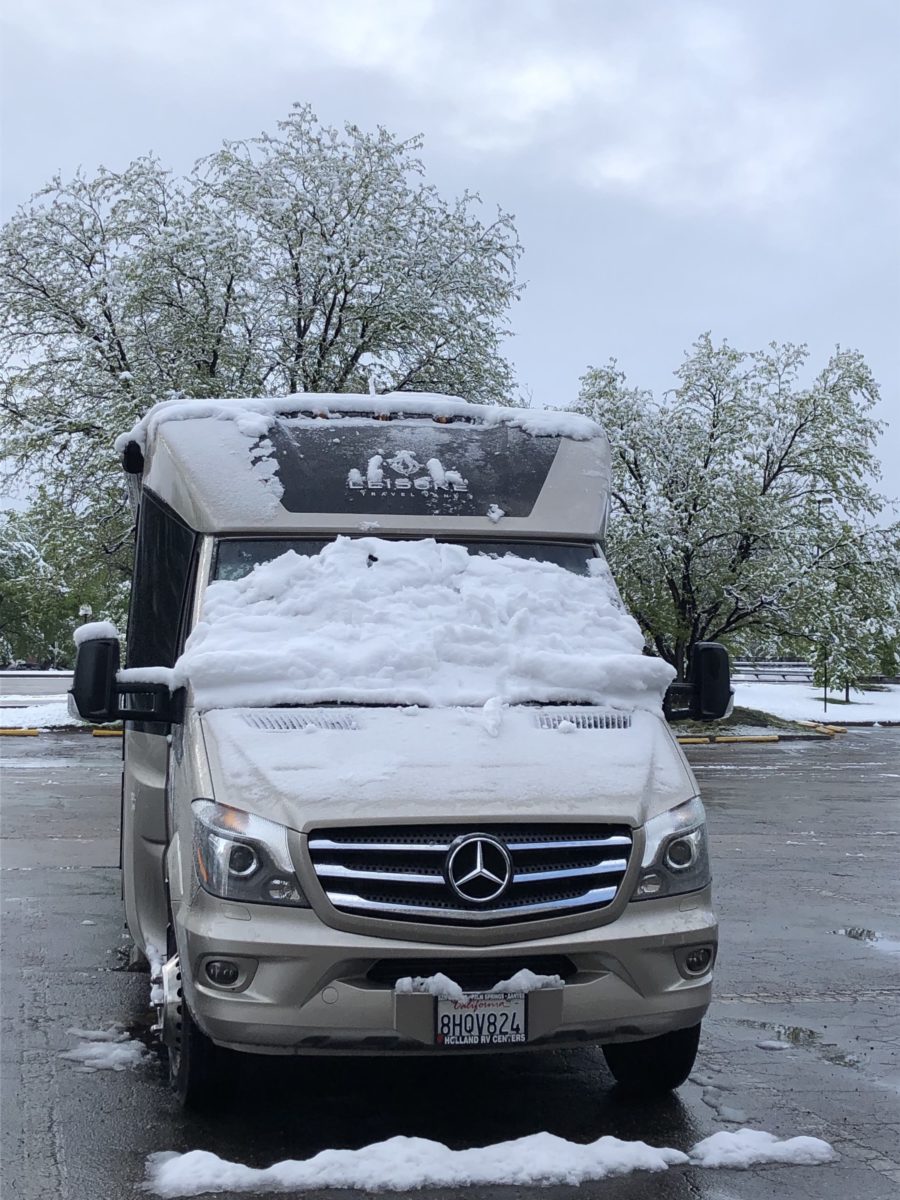 We enjoyed terrific dining in Boulder, but I was glad to rejoin our planned route in the Black Hills of South Dakota, just as Memorial Day weekend began.

The Black Hills shone. They had seen some of the snow we’d avoided, but it had melted from all but the most shaded areas. The moist soil brought out frogs, and their cheerful, insistent calls accompanied me as I rode through the fresh forests and meadows and beside swift-flowing streams. 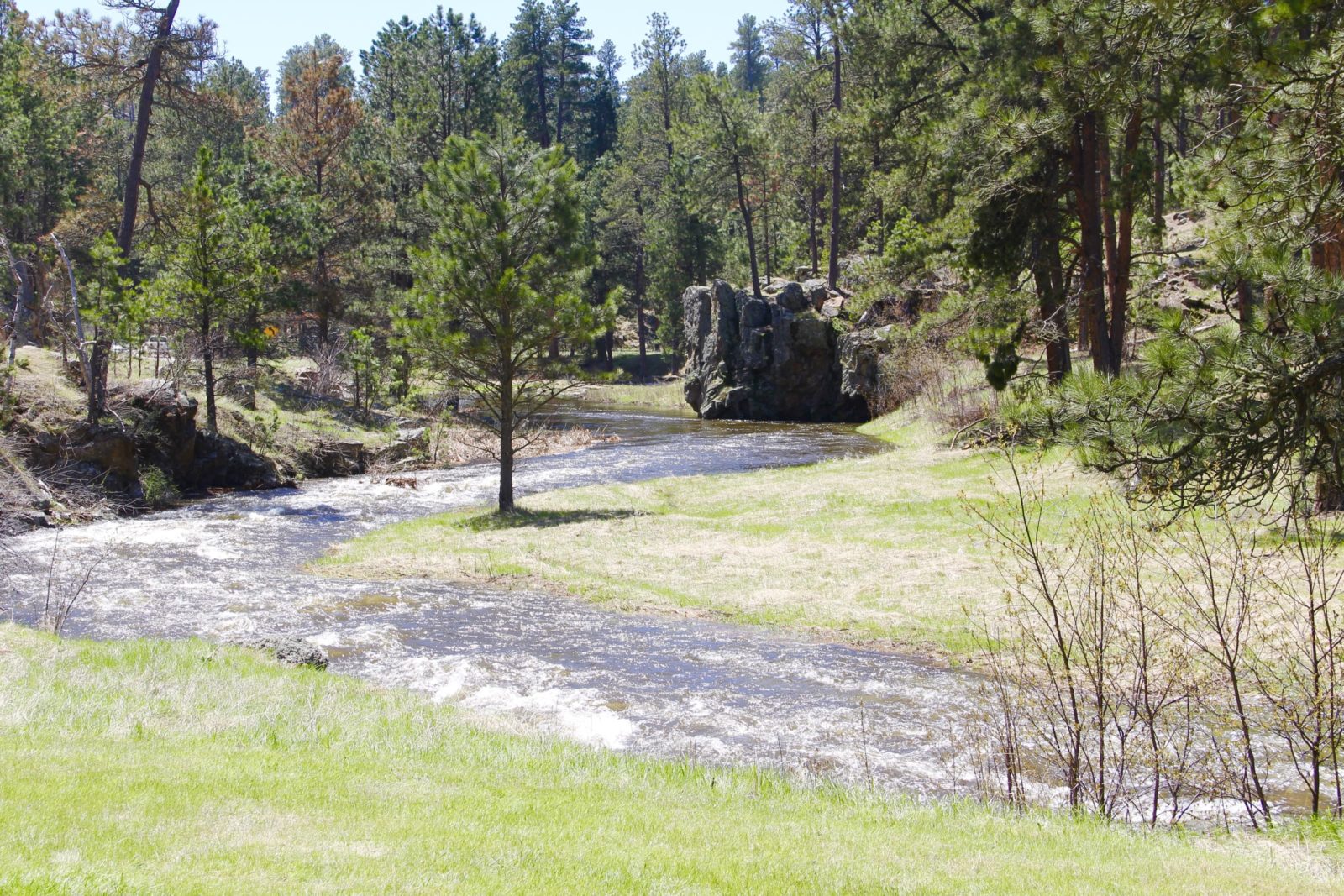 As we wandered the quiet roads of Wind Cave National Park and Custer State Park, the buffalo roamed, the antelope played, and the skies were not cloudy all day. The prairie dogs don’t make the song, but they were right there with us too.

We paused again in Minnesota to visit family and friends, but not until after we enjoyed the lakes and farmlands of southwestern Minnesota. We stopped briefly in the small town of Currie, Minnesota, where my grandmother grew up on a farm. The homestead is gone but the cornfields remain, and I felt a strong connection to the landscape as I bicycled past fields my great-grandfather had cleared over 100 years ago. 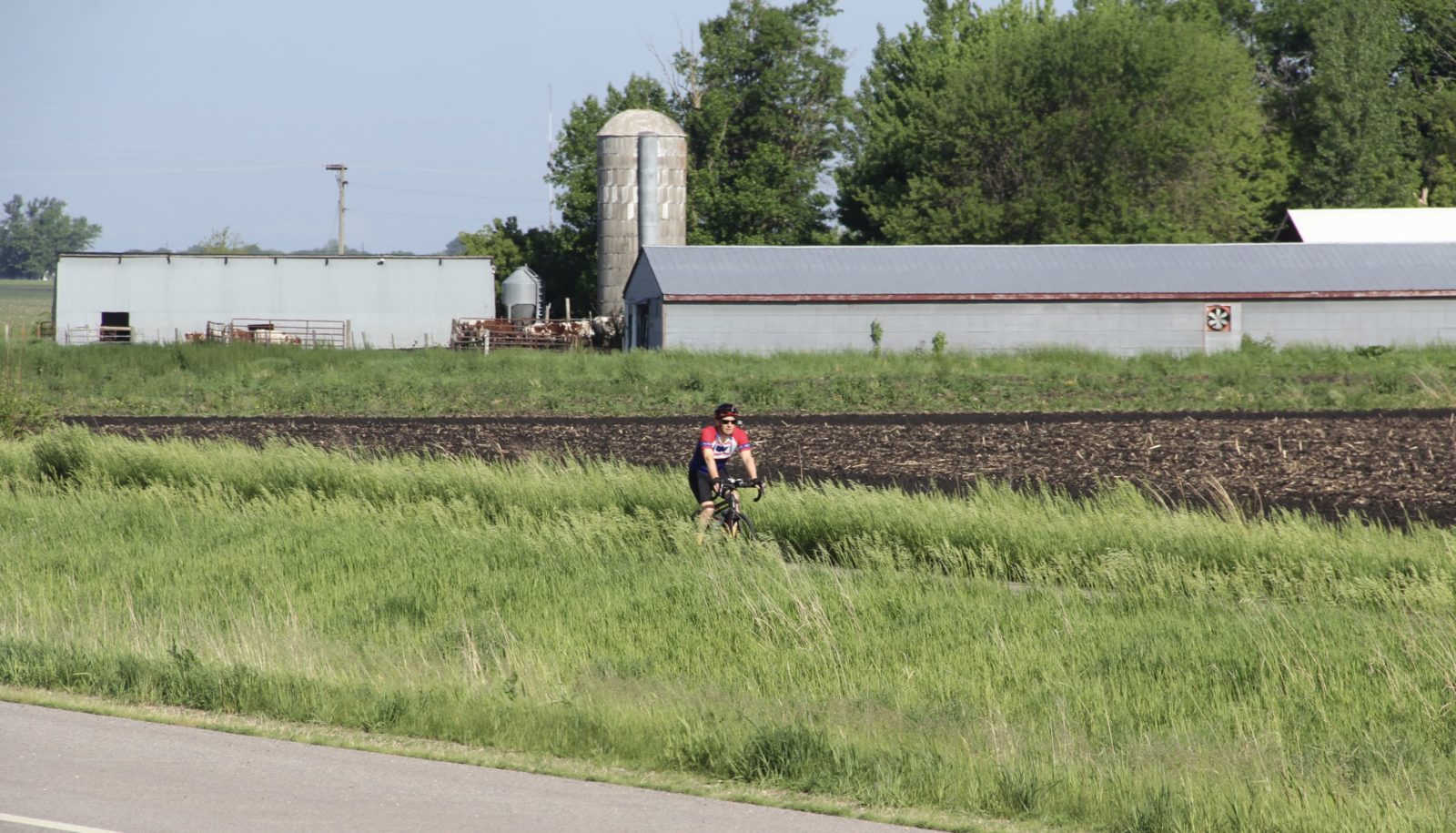 We left Minnesota for the rolling hills and small dairy farms of Wisconsin, passing through small towns like Trempealeau, Sparta, Wonewoc, and Sauk City before arriving at the state capital in Madison. 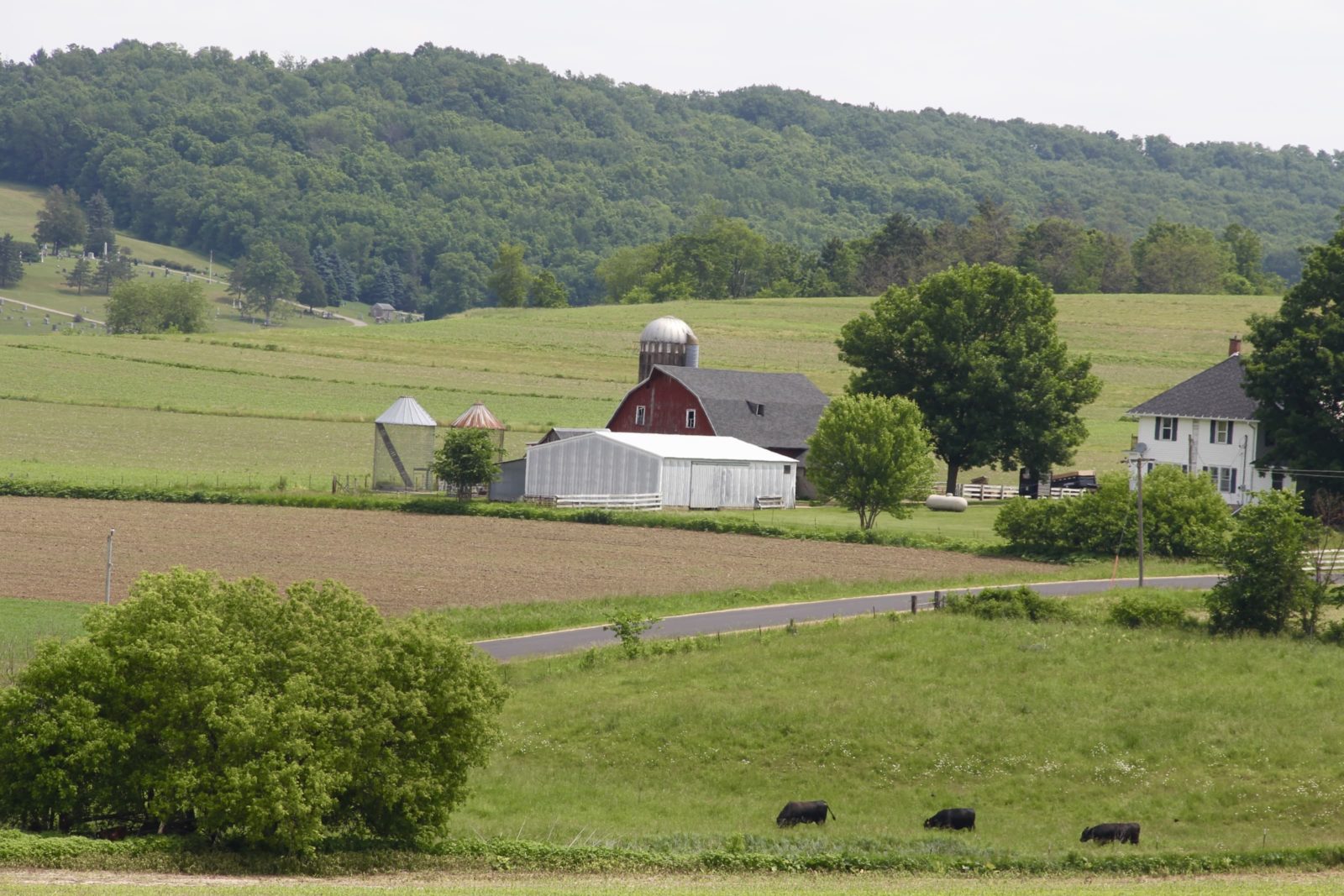 After Wisconsin, I skirted Chicago accompanied by a relative who lives in the area, and we found many quiet bike paths through the suburbs.

Toni and I then continued across Indiana and Ohio, reaching Lake Erie near Cleveland. In Indiana and Ohio, we learned how farmers in the area had suffered from rains during the spring and early summer. It looked like crops in over half the fields we passed were destroyed. Our friends on the east and west coasts had no idea of the hardship suffered on these Midwest farms. 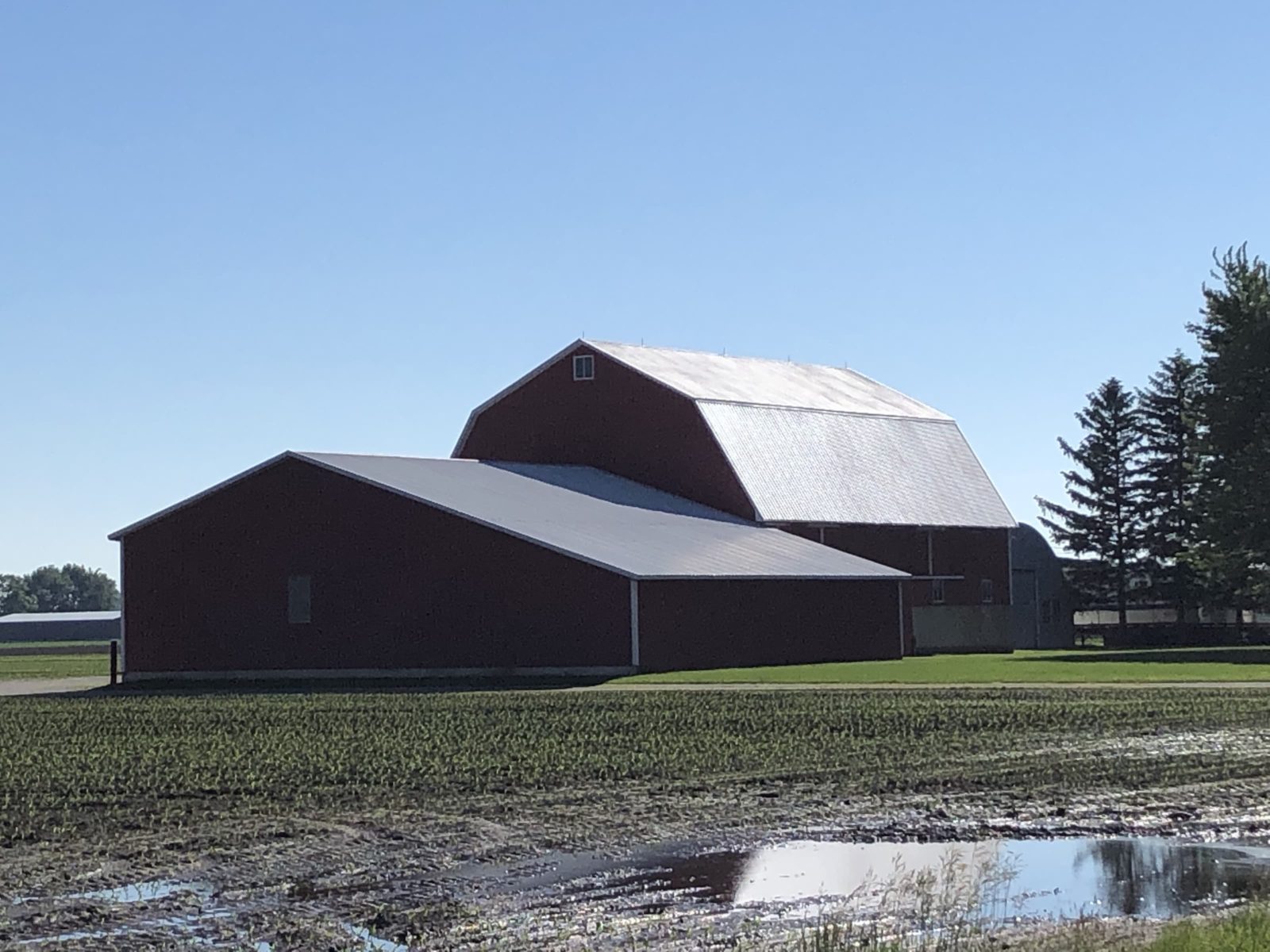 Cleveland was the only large downtown area we crossed directly. I was concerned about cycling through an unknown urban area, but we arrived early on a Saturday morning, and I joined Cleveland residents who were cycling, running, and walking along the lakefront on a festive weekend morning. In Erie, Pennsylvania, we reconnected with old friends, and enjoyed their hospitality on a rest day as we saw the city and enjoyed their fine cooking (and their scotch collection).

When we left Erie, we had ten days to cross about 800 miles and reach Boston by the Fourth of July. That gave us time to enjoy Seneca Falls and visit friends on Cayuga Lake in the Finger Lakes region, spend an evening on a farm in Cazenovia, New York, where a Los Angeles friend had grown up, and celebrate my brother’s birthday with him in western Massachusetts. 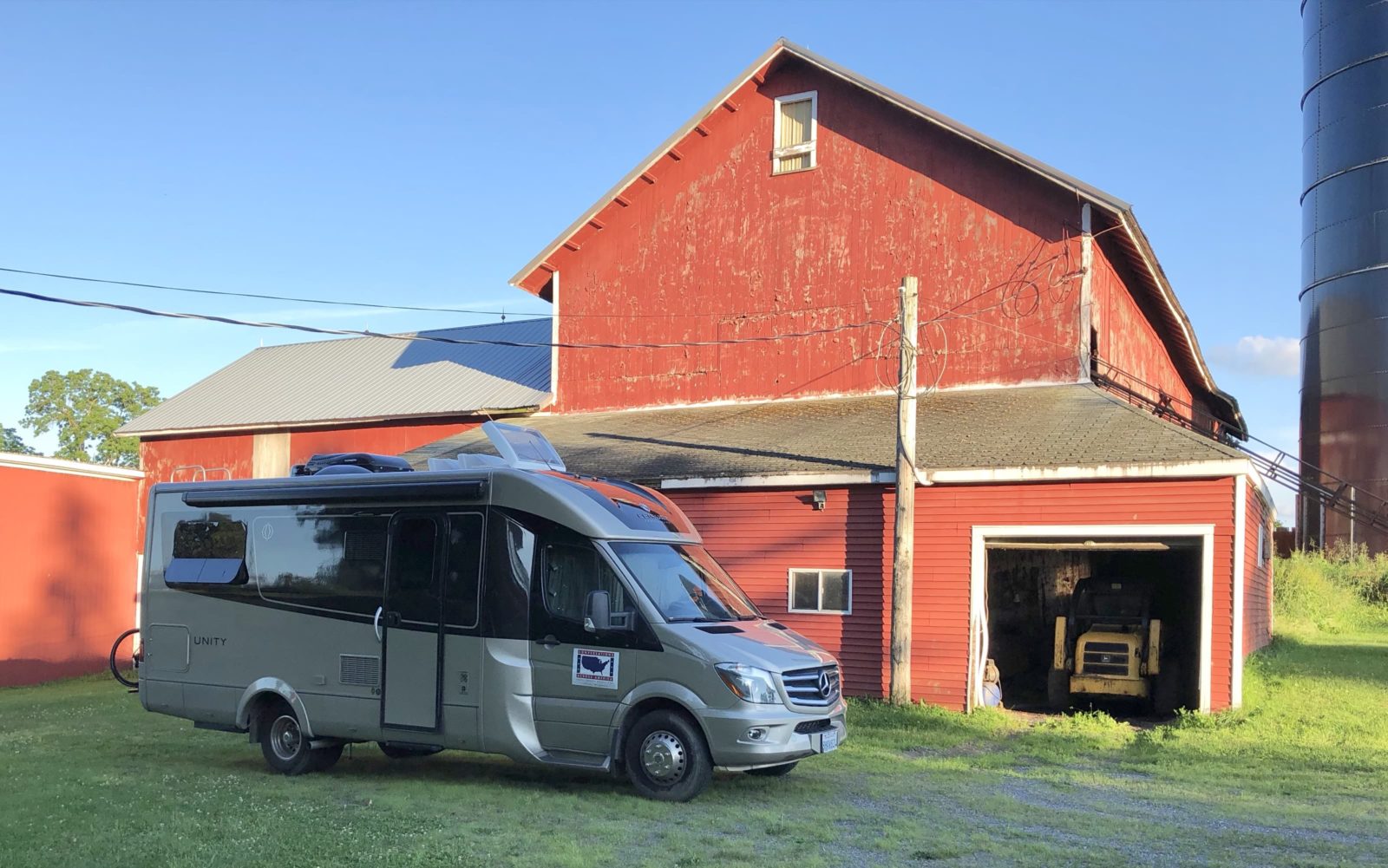 My brother and his family live on a mountain outside Northfield, Massachusetts, and the ride to his home led me up the steepest hill of the trip. My nephew and his son joined me to motivate me to reach the top.

Central Massachusetts followed, with the busiest, narrowest roads of the entire trip. Another relative, an accomplished cyclist, joined me on this next-to-last day of the ride and led me safely through the maze of New England roads to his house in suburban Boston.

All that remained was a 40-mile ride to the beach on the morning of the Fourth of July. I started early and rode through quiet suburbs, stopping briefly a little over five miles from the beach to visit the house my family lived in for a few years after I was born. My 25-year-old twin sons, Kyle and Ryan, flew out from California and joined me for the last few miles of the trip as we mingled with parade-goers and beach traffic. 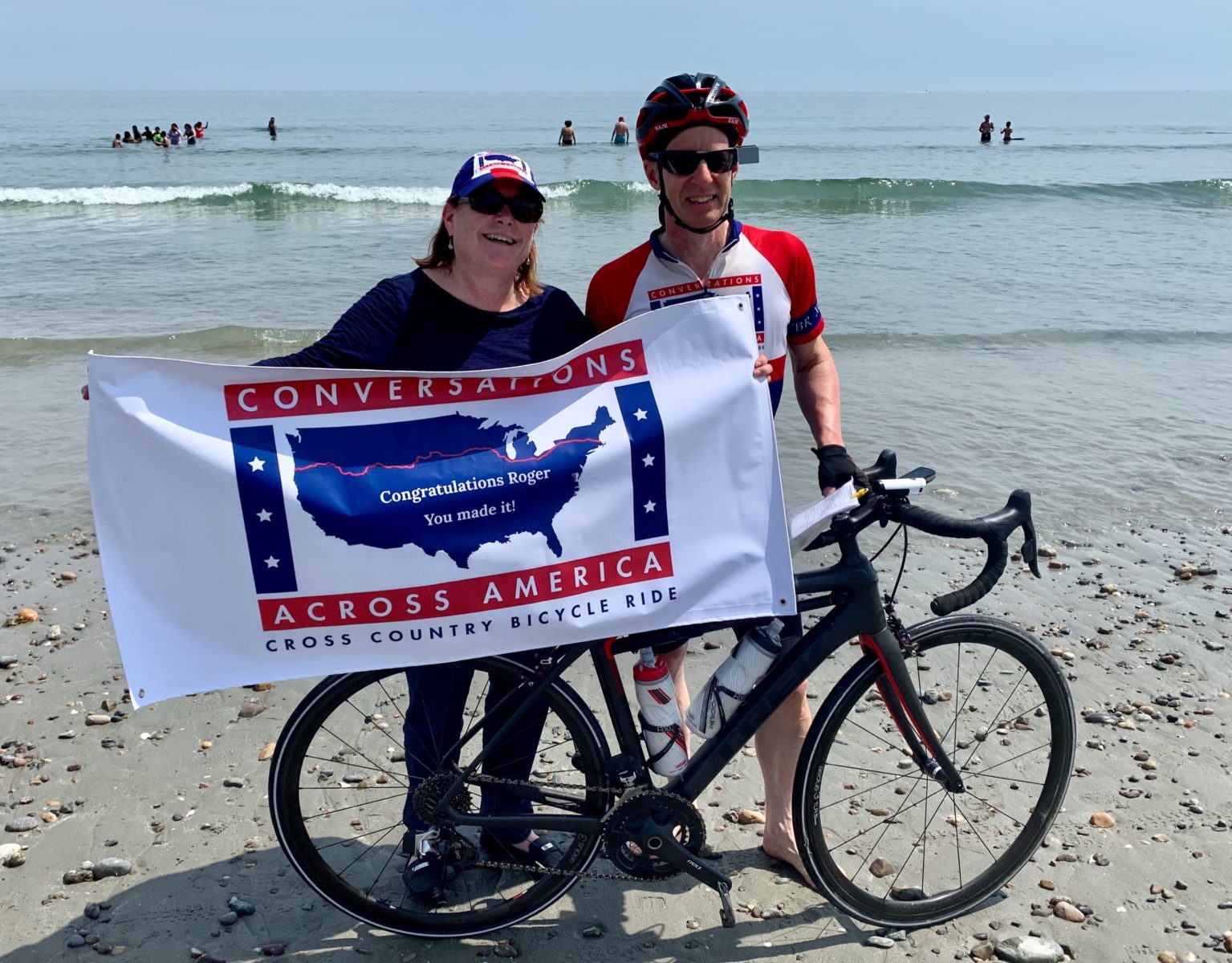 At Nantasket Beach, I could go no further east without swimming. I got a few odd looks from sunbathers and waders as I walked into the ocean with my bicycle and dipped the tires in the water to mark the end of my transcontinental journey.

Our trip was much more than this brief summary can capture, and you can get a deeper taste of our journey at our website. The website includes profiles Toni wrote for many of the people she talked to, a summary of each day’s ride with plenty of photos and a map of the exact route, profiles of several wineries we visited (I am a certified wine expert in addition to a passionate cyclist), a collection of the best barns along the route, and other reflections on our journey.

Now that the trip is over, I am back to riding around our home in Southern California for exercise, and the rhythm of riding often brings back memories of my journey: the grandeur and variety of the countryside; the working ranches and farms of America; the quiet, small towns of the Midwest; the lively cities from Boise to Boston. And I remember how, everywhere I traveled, I was relieved to see our Unity van parked by the side of the road just ahead, where Toni was ready with whatever I needed to keep cycling along.

On and off the bicycle now, I also carry the spirit of the proud and kind people we met on our journey. From the mountains of Cascadia to the New England byways, we met folks who were working hard for their families and their communities, and who extended a welcome to visitors trekking across the country. My goal of bicycling across the country helped us connect with residents of the places we visited, but you don’t need to be that ambitious to encounter these same wonderful people. Just travel the road with an open heart and a warm smile, and you will meet them too.

Roger Patterson recently retired from his position as an attorney with The Walt Disney Company. He is an avid cyclist and a certified wine expert.