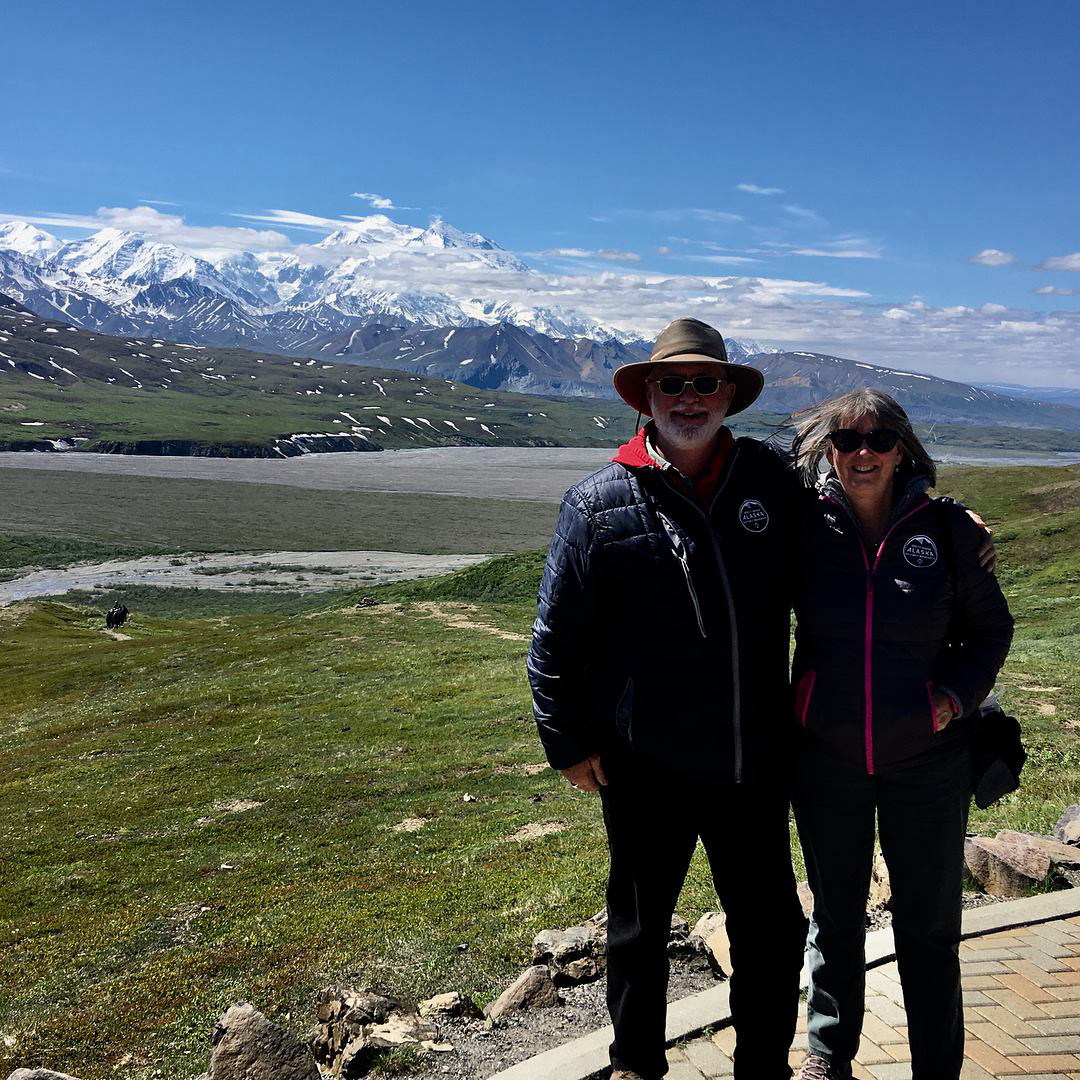 In Part I, we left our home near the US-Mexico border in southern Arizona to begin our Alaska adventure, setting off in mid-May, 2018. Now it’s June 26, already a month into the Alaska Caravan adventure and over one-and-a-half months since we left our home. We are now in Anchorage, Alaska, and our group of 22 Leisure Travel Vans and 43 owners are preparing for the next leg of our journey – Denali National Park!

Unfortunately, our wagon master won’t be able to travel with us to the Park, since his rig has been disabled by an electrical short below the steering column. It will take mechanics in Anchorage several days to find the problem and repair it before he is able to rejoin the group in Whitehorse, Yukon, so for now other leaders have stepped up to take the helm on the eve of our journey to Denali.

Our travel pod of four LTVs left Anchorage at 8:30 in the morning and drove 146 miles to Talkeetna, Alaska, where we stopped for lunch. Talkeetna is located where three rivers meet: the Susitna, the Chulitna, and the Talkeetna. The town of Talkeetna began in 1916, when the area was chosen as a district headquarters for the Alaska Railroad. A post office was opened, along with a sawmill, trading post, cigar and donkey store, and other businesses, as well as many cabins. In 1917, the residents encouraged the government to survey the lots on which their homes stood. In 1919, the railroad surveyed and auctioned 80 lots, 41 of which already had permanent structures on them. The average price at the sale was $14.25. [1] 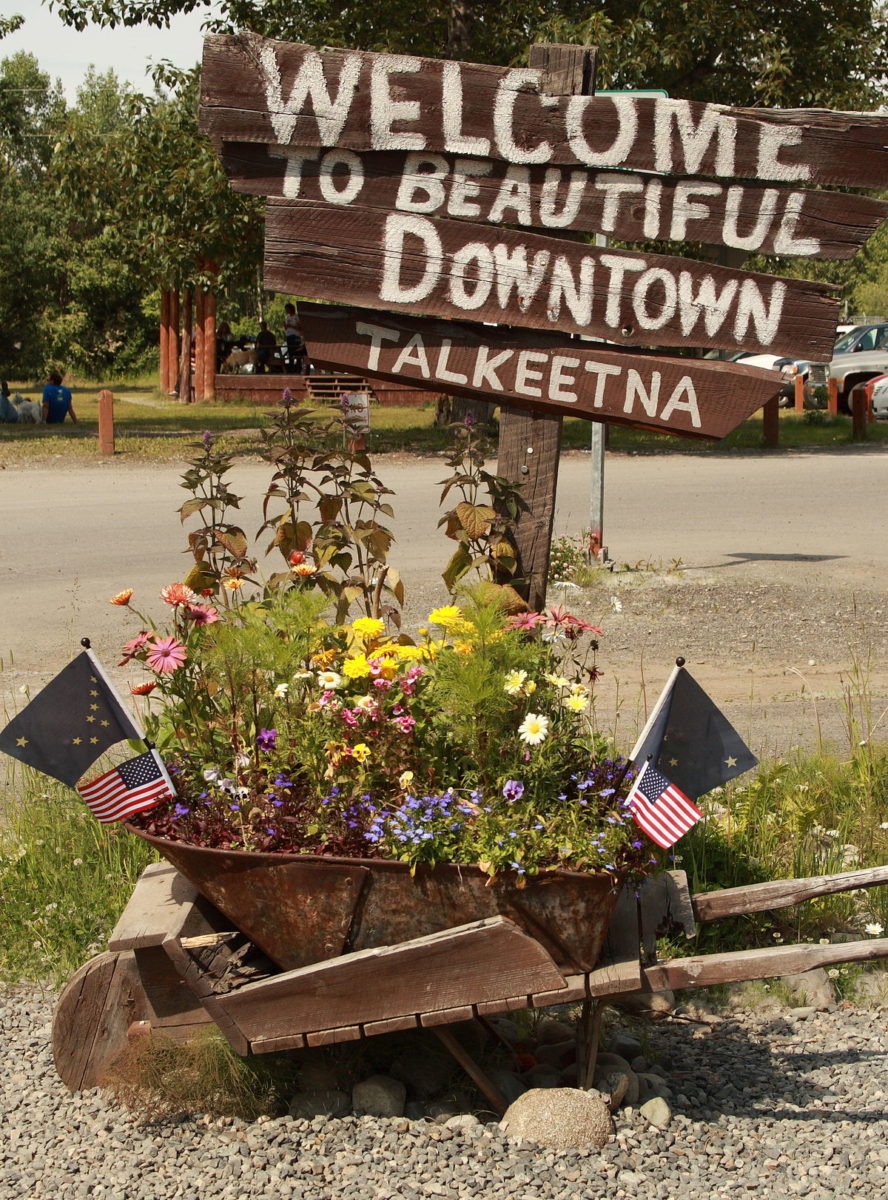 After our visit in Talkeetna, we continued our journey to Denali State Park (located just outside Denali National Park), where we got our first look at Mount Denali, the tallest peak in North America. We didn’t see much since the mountains were shrouded in clouds, but even with the clouds the views were mesmerizing.

We continued on to Denali National Park and set up camp at Riley Creek Campground, with dry camping at $24 per night. A free shuttle bus stops at all of the campgrounds in the Park, taking campers to and from the visitors center, the main hub of activity within the Park.

We paid $40 per person for an all-day bus tour through the Park that featured wildlife sightings and, of course, views of Denali. The tour guide informed us that seeing the mountain with very few clouds blocking the views was a rare occurrence. Only 5% of park visitors get to see the entire mountain, and we were part of that 5%!

Denali National Park lived up to its reputation not only for the natural beauty, but for the wildlife encounters. While on a short hike through the forest, MaryAnn and I came face-to-face with a female moose! We also saw elk, caribou, and a grizzly bear (the grizzly was seen from a very far distance with a zoom lens). 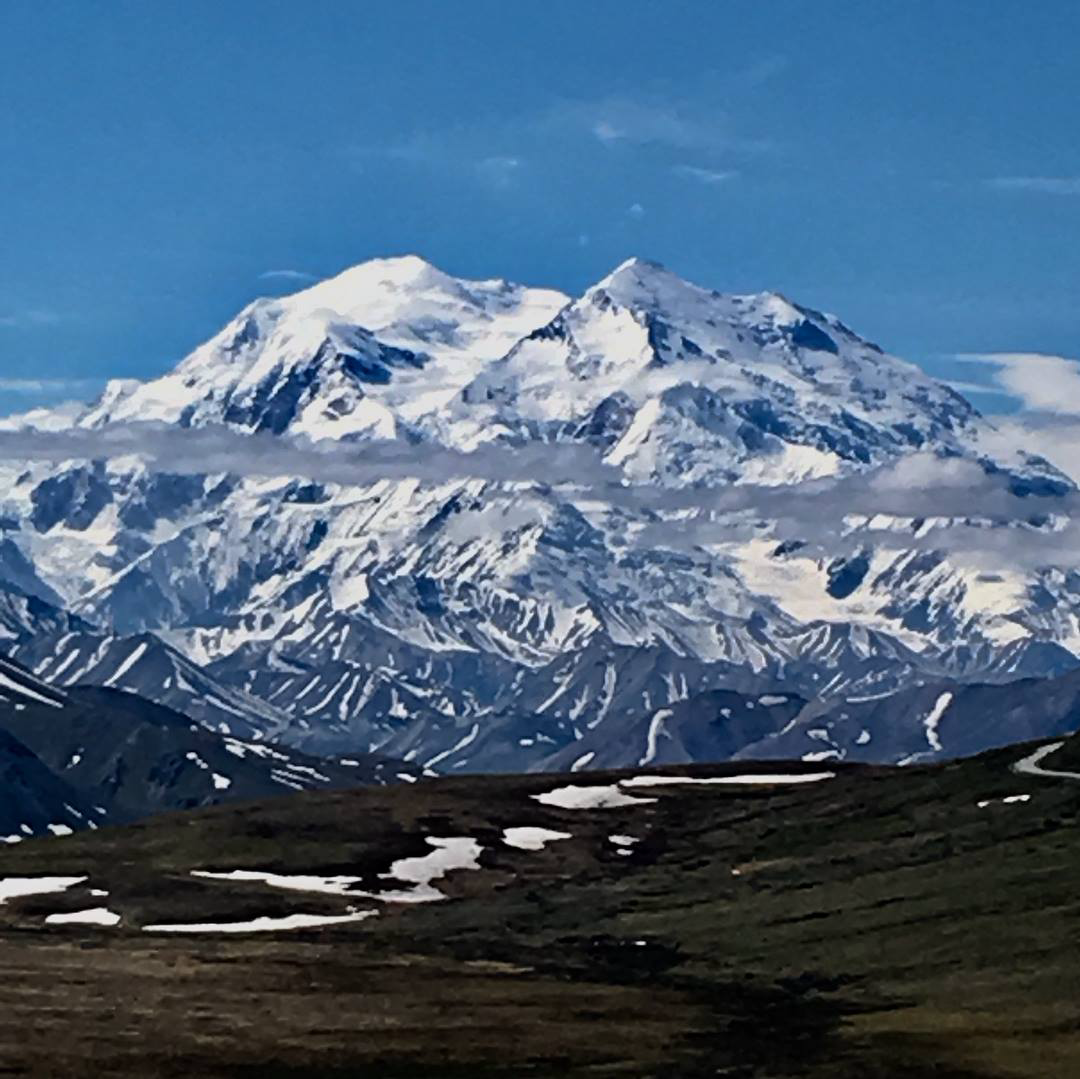 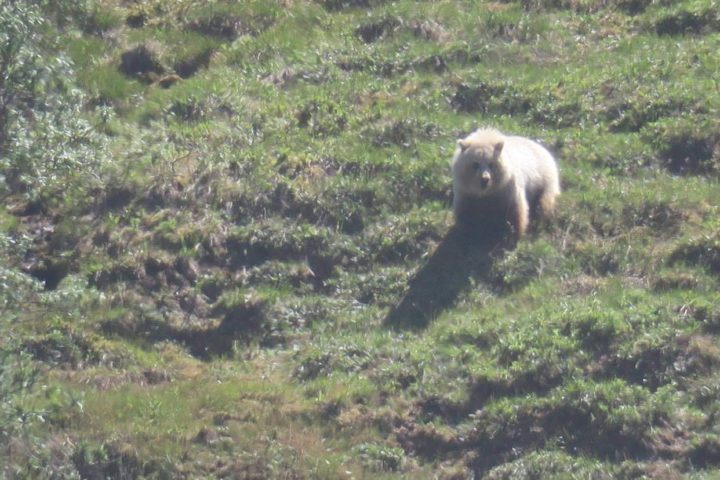 Grizzly bear about 1-2 miles away on the side of a mountain in Denali National Park. Photo by Rebecca Rourk Polnaszek, a fellow Alaska Caravan member.

For our last night in Denali, we all went to the Alaska Cabin Nite Dinner Theater. It was a great way to end our visit to Denali – all-you-can-eat and excellent entertainment. As we were leaving Denali, a moose and her calf walked out of the forest and crossed the road right in front of us, as if to say, “Thanks for visiting Denali!” This was truly an epic adventure! 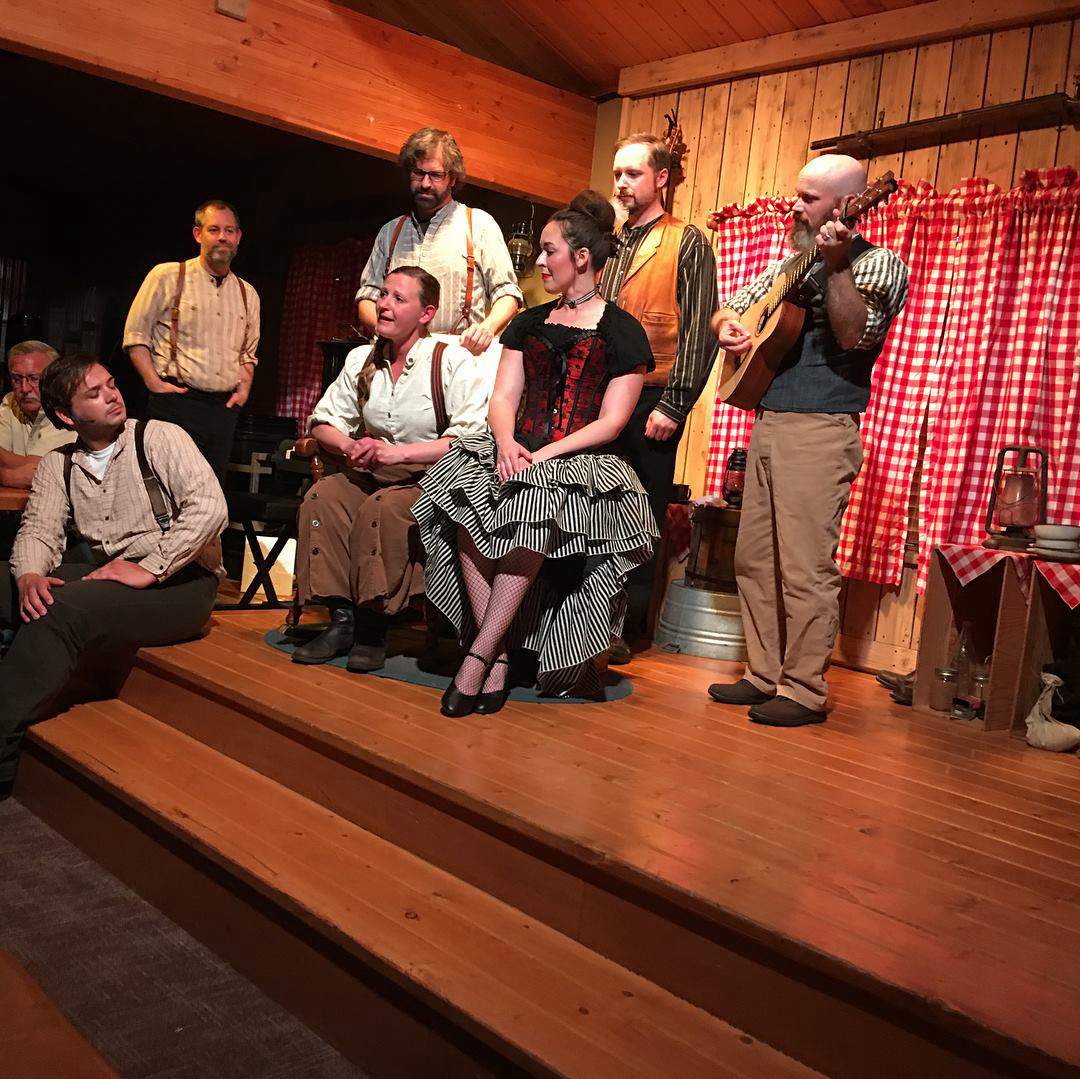 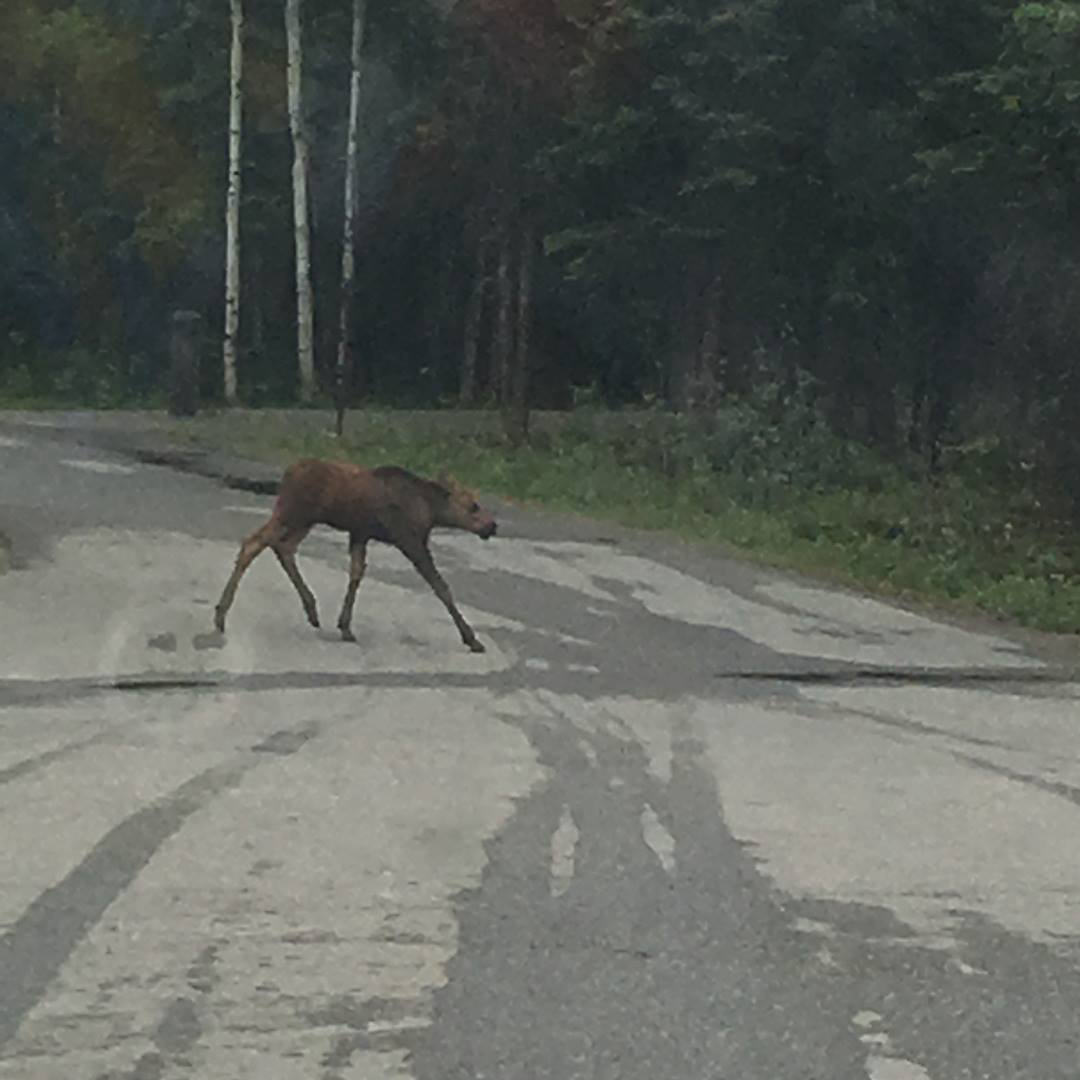 From Denali we continued on 119 miles to Fairbanks, Alaska, and stayed at River’s Edge Resort for three nights. While there, we took a riverboat tour on Riverboat Discovery. One member of our group also caught a small plane to the Arctic Circle. We were right on the banks of the river and within walking distance of restaurants and grocery stores. Eielson Air Force Base was also nearby so, of course, we had to stop there as well. 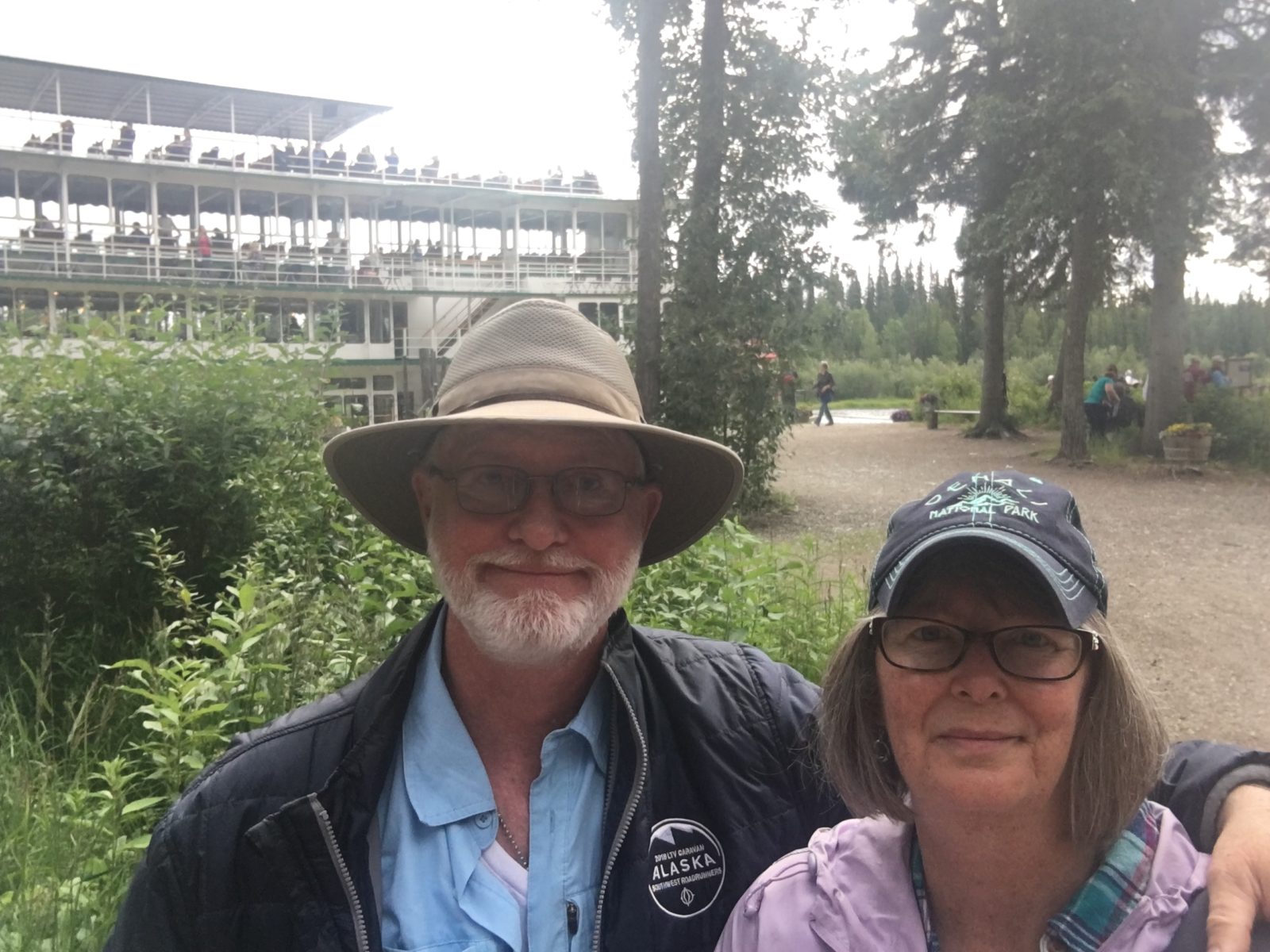 From Fairbanks we traveled back to Tok, Alaska, and stayed at Sourdough Campground, which offers potable water and a dump station but only 15-amp electric service. On July 4, we crossed the Canadian border back into Yukon, but we didn’t say goodbye to Alaska just yet.

We stopped at Destruction Bay RV Lodge to celebrate the Fourth of July, with our group’s dinner covered by the Southwest LTV Roadrunners Travelers Club. We took a drone picture of our rigs spelling out the letters “LTV” in the parking lot.

At selected rally points along our trip, the Club had planned to have a group barbecue or a group dinner at a restaurant in the area we were camped at, with the Club covering costs for everything except drinks. They were able to do this because, when making reservations and paying for the RV parks, the difference between the Canadian and American dollar was overlooked – the Club used the leftover money to pay for these dinners, and we still received a hefty refund when we returned home.

After our Fourth of July celebration, we continued on to Cottonwood RV Park, about 16 miles away on the banks of Kluane Lake. This park has 15-amp electric service and problems with surges. Electrical service issues like reverse polarity and power surges was a challenge at many of the RV parks along the way, but since there’s only one way to drive to and from Alaska, we couldn’t help but stop at some of these parks. If you go on this trip, make sure to bring a 15-amp adapter and an extra in-line surge protector. 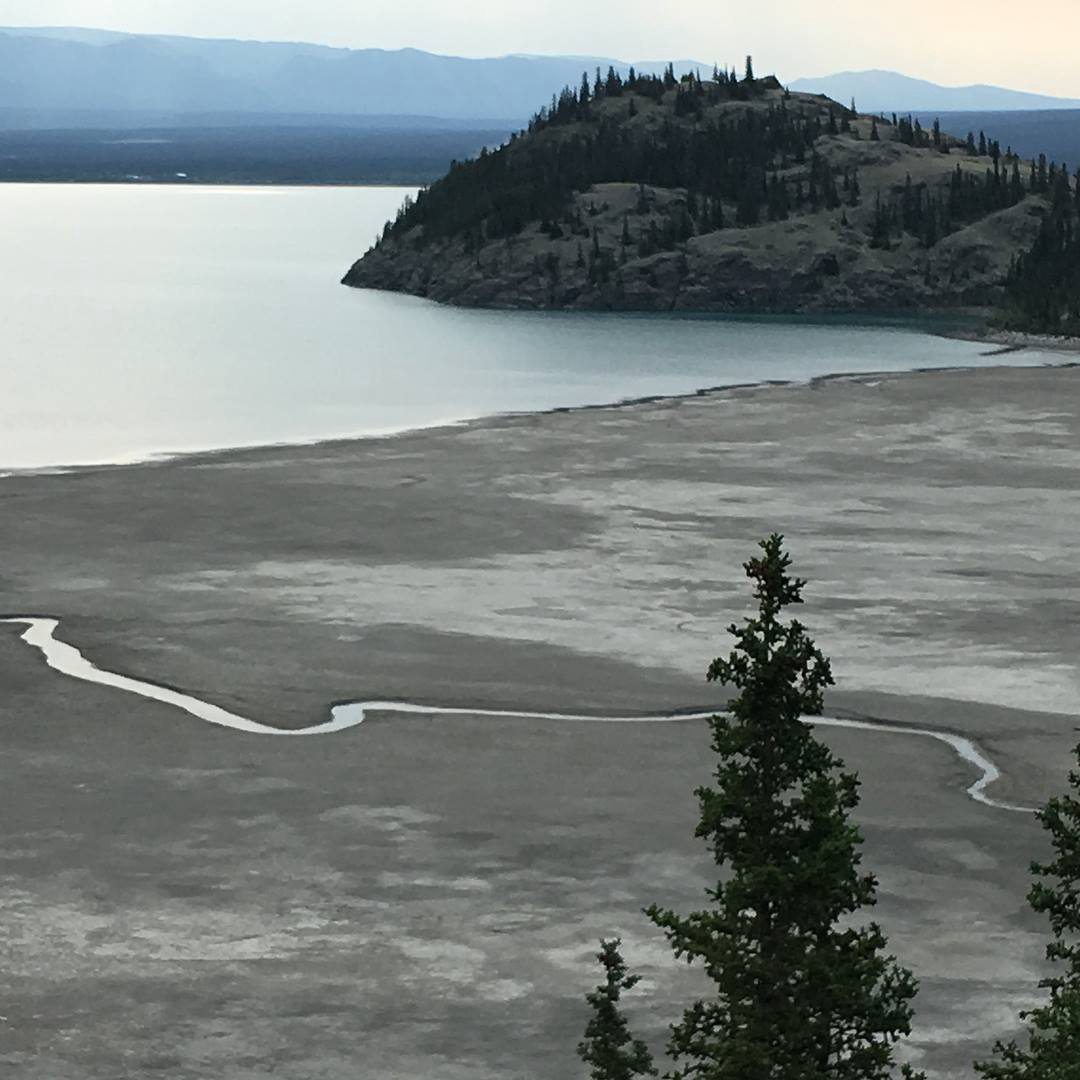 From Destruction Bay we traveled 197 miles back into Alaska, where we camped for two nights at Oceanside RV Park in Haines. The park was aptly named; we were right on the edge of the ocean. While we there, the park owner hosted a lobster dinner for the group.

We took a ferry to Juneau, Alaska, on a day trip – the only way to get to Juneau is by plane or boat. While there, we took a tram to the top of a nearby mountain overlooking the city, and the views were breathtaking! 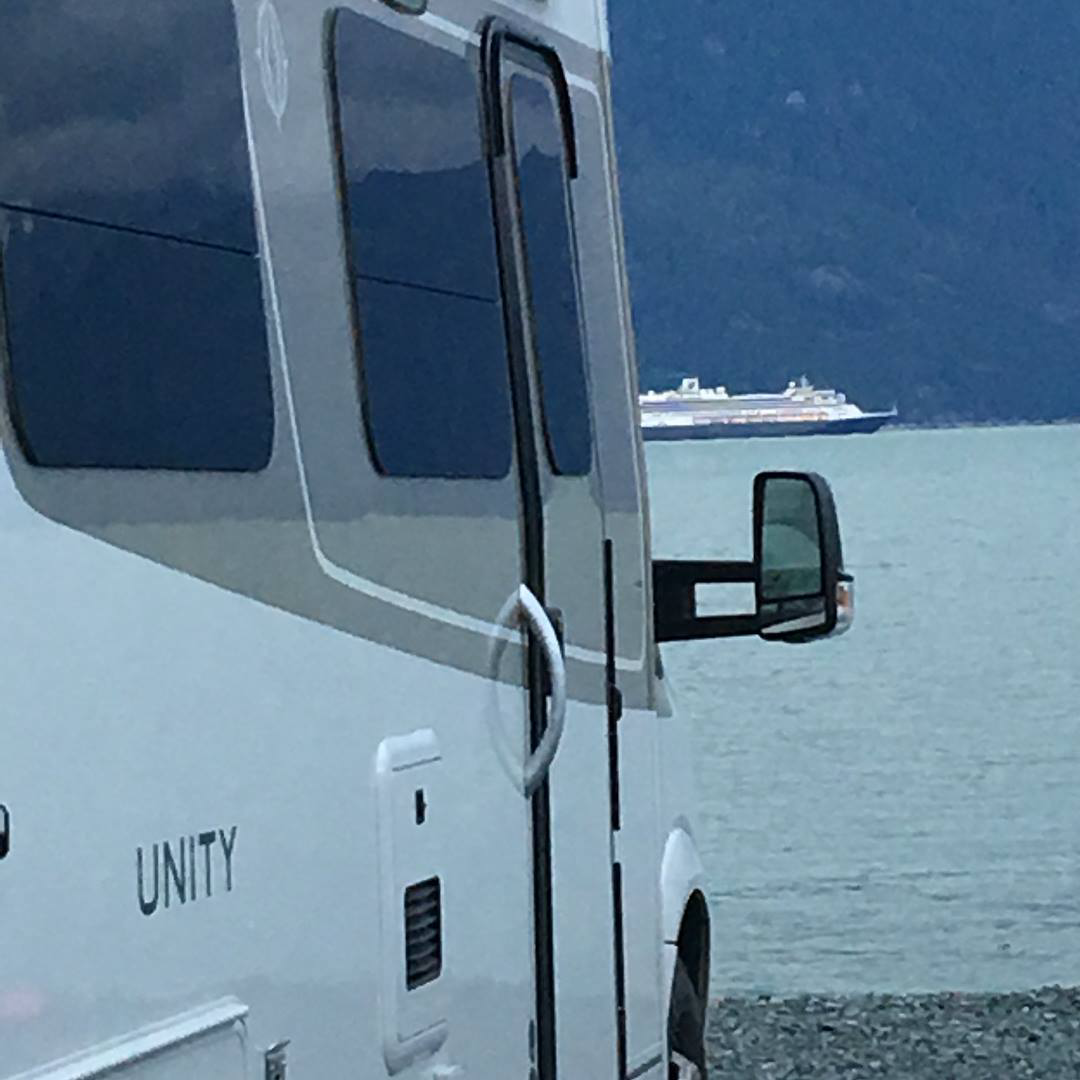 After Haines, we were scheduled to put our rigs on a ferry to go to Skagway, but the ferry wasn’t operating due to mechanical failure, so that part of the trip was canceled. However, some of the group decided to drive to Skagway on their own. Fortunately, we had already been to Skagway via a train when we stopped at Whitehorse, Yukon, on the way up.

Those who drove to Skagway for a one-night stay caught up with the rest of us the next day in Whitehorse, and we continued our journey back, driving 108 miles through Yukon to Teslin, where we stayed once again at Yukon Motel and Lakeshore RV Park for one night.

The next day we continued down the Alaska Highway, traveling 146 miles to Watson Lake. We went back to the Signpost Forest to check on our daughter’s Texas license plate, which we had placed there in her memory (see Part I). 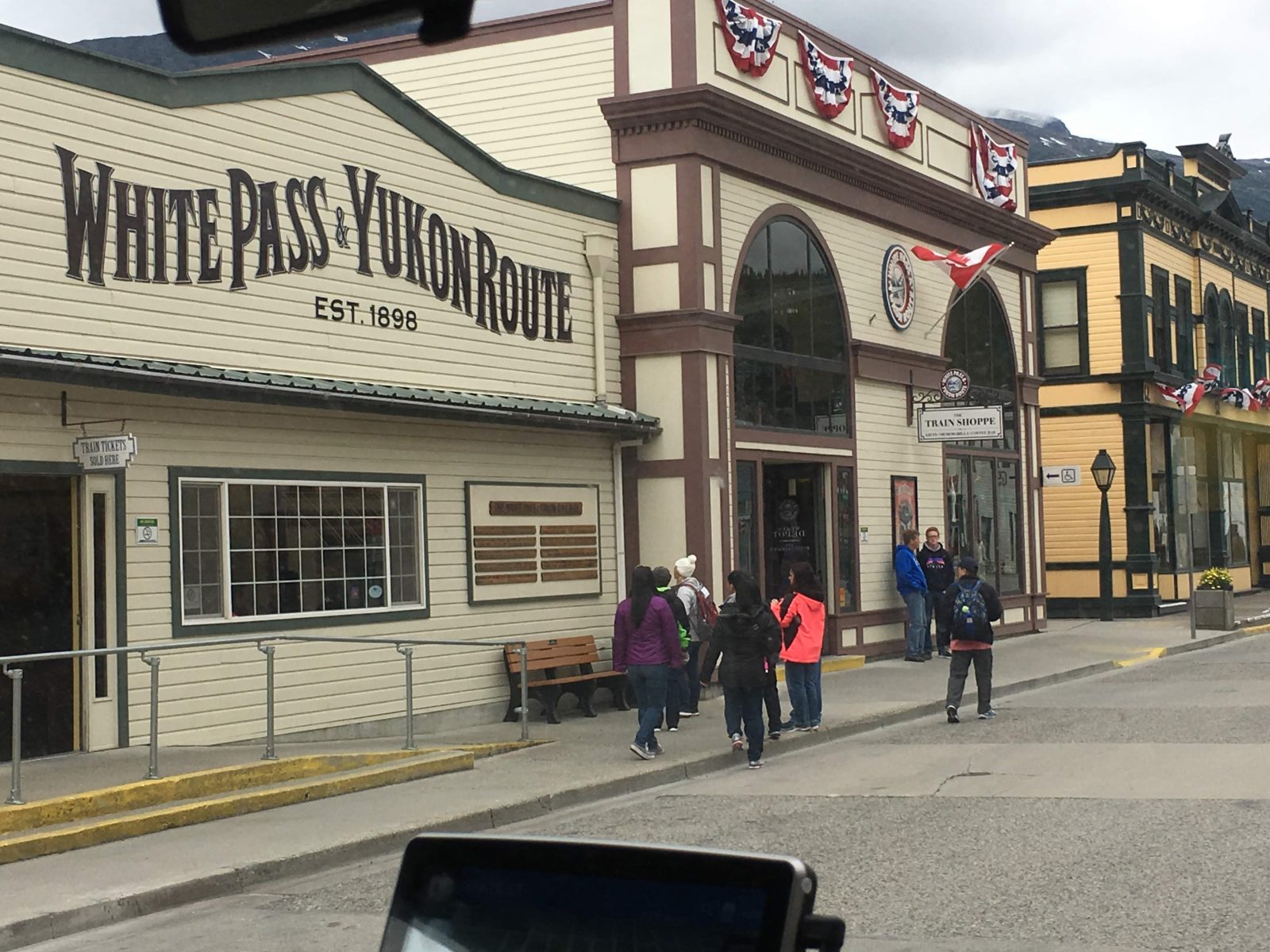 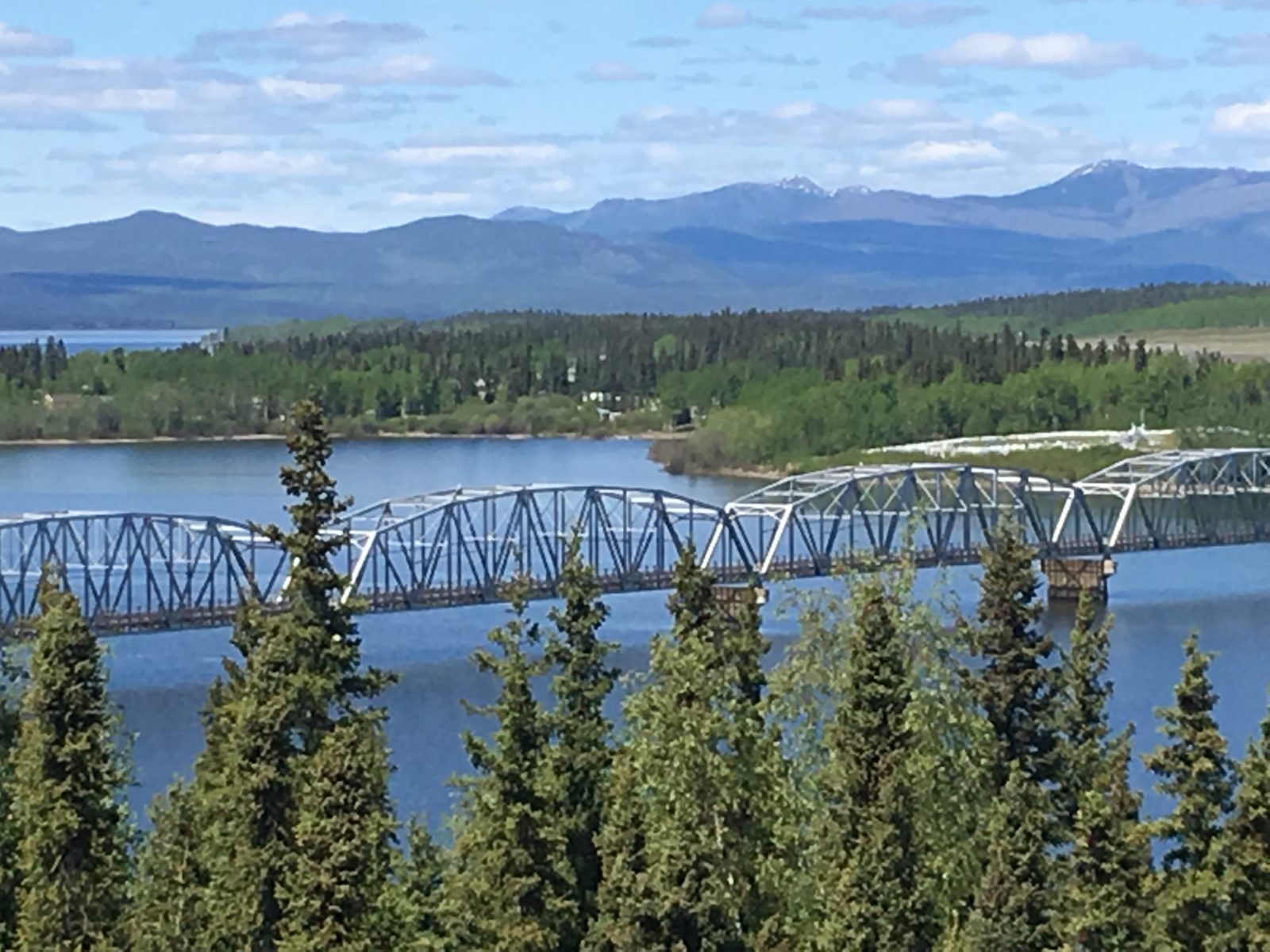 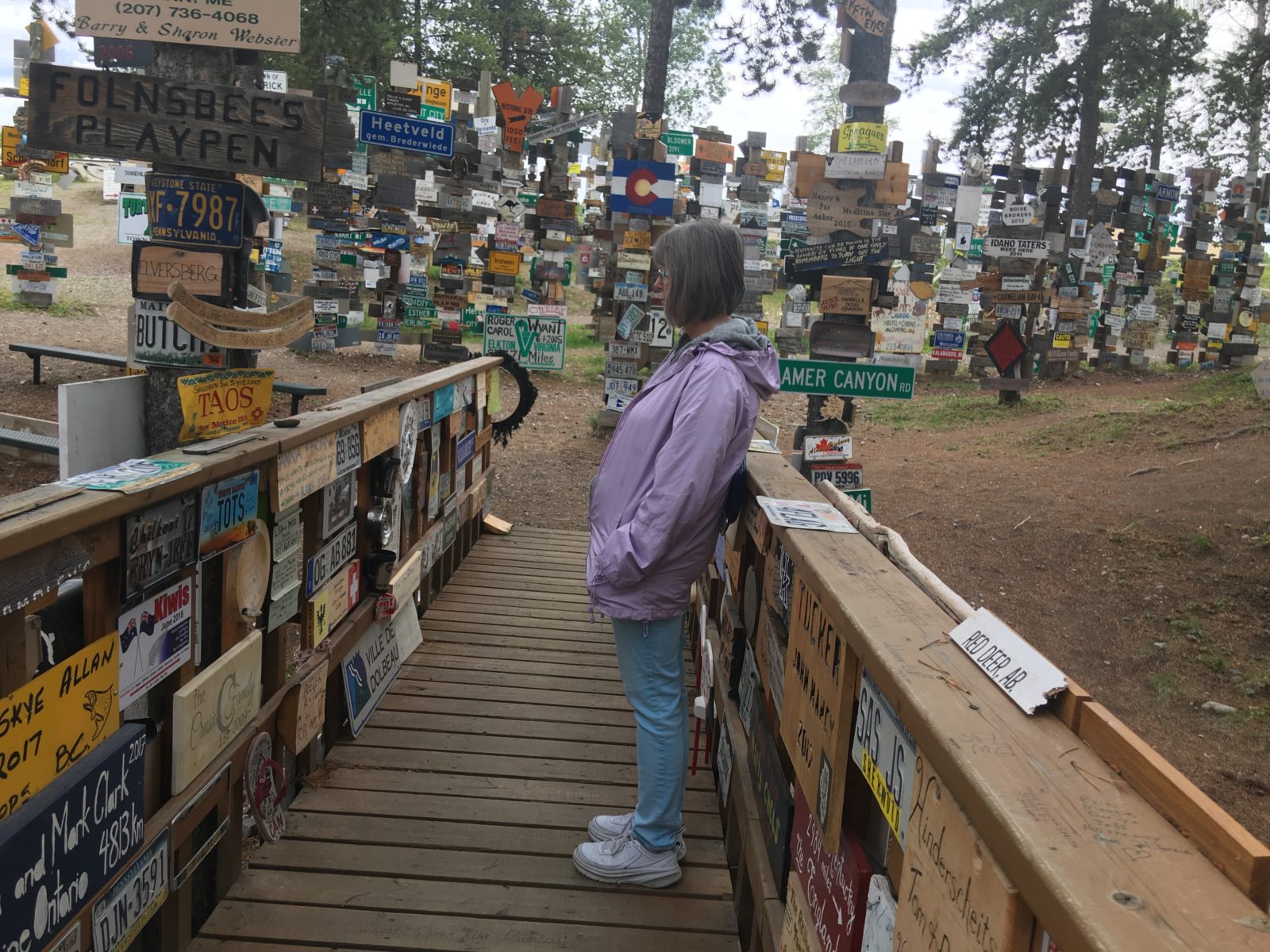 MaryAnn Barber at the Signpost Forest in Watson Lake, Yukon.

We continued down the Stewart-Cassiar Highway, a beautiful drive with cascading waterfalls and mountain ranges, magnificent glaciers that could be easily seen from the road, and, of course, endless forests as well. Of all the beautiful roads we had driven on, the Cassiar Highway was by far my favorite. We stopped for two nights in Stewart, BC, on the border with Hyder, Alaska, at Bear River RV Park.

It was pouring down rain when we arrived in Stewart, but that didn’t keep us from checking out the local restaurants and driving across the border into Hyder, Alaska, in hopes of seeing a grizzly bear catching salmon in one of the streams. Unfortunately for us, the salmon were late this year and no salmon meant no bears. One person in our group did manage to see a grizzly looking for salmon in the stream, but, finding none, he quickly left the area. 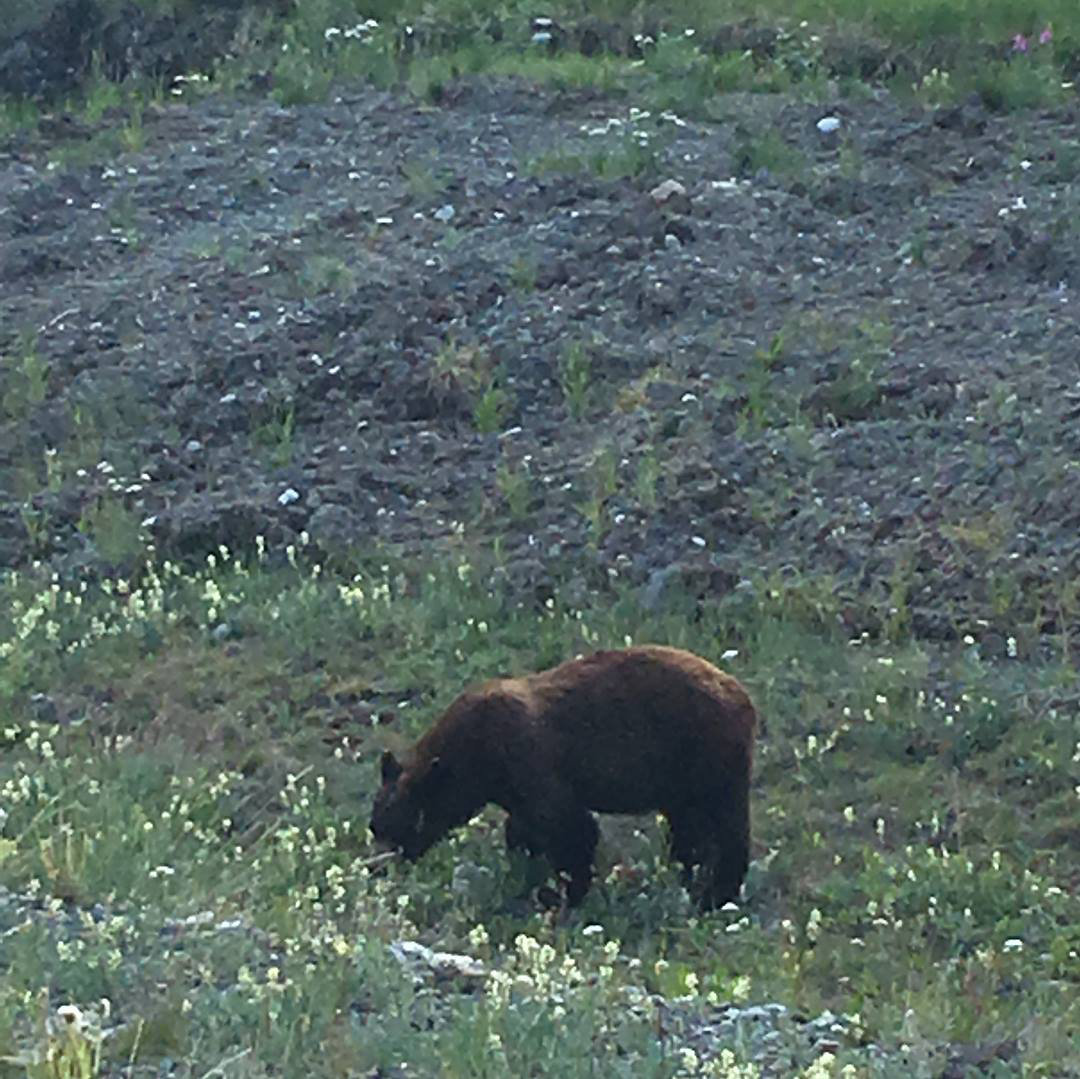 Grizzly bear along the road somewhere in Yukon.

After this stop, we continued down the Stewart-Cassiar Highway to Telkwa, where we stayed at Fort Telkwa RV Park for two nights. Leaving Telkwa, we stopped to visit Fort St. James National Historic Site (worth the detour) before continuing on to Prince George and back to RV parks we had already stayed at on the way up through BC. 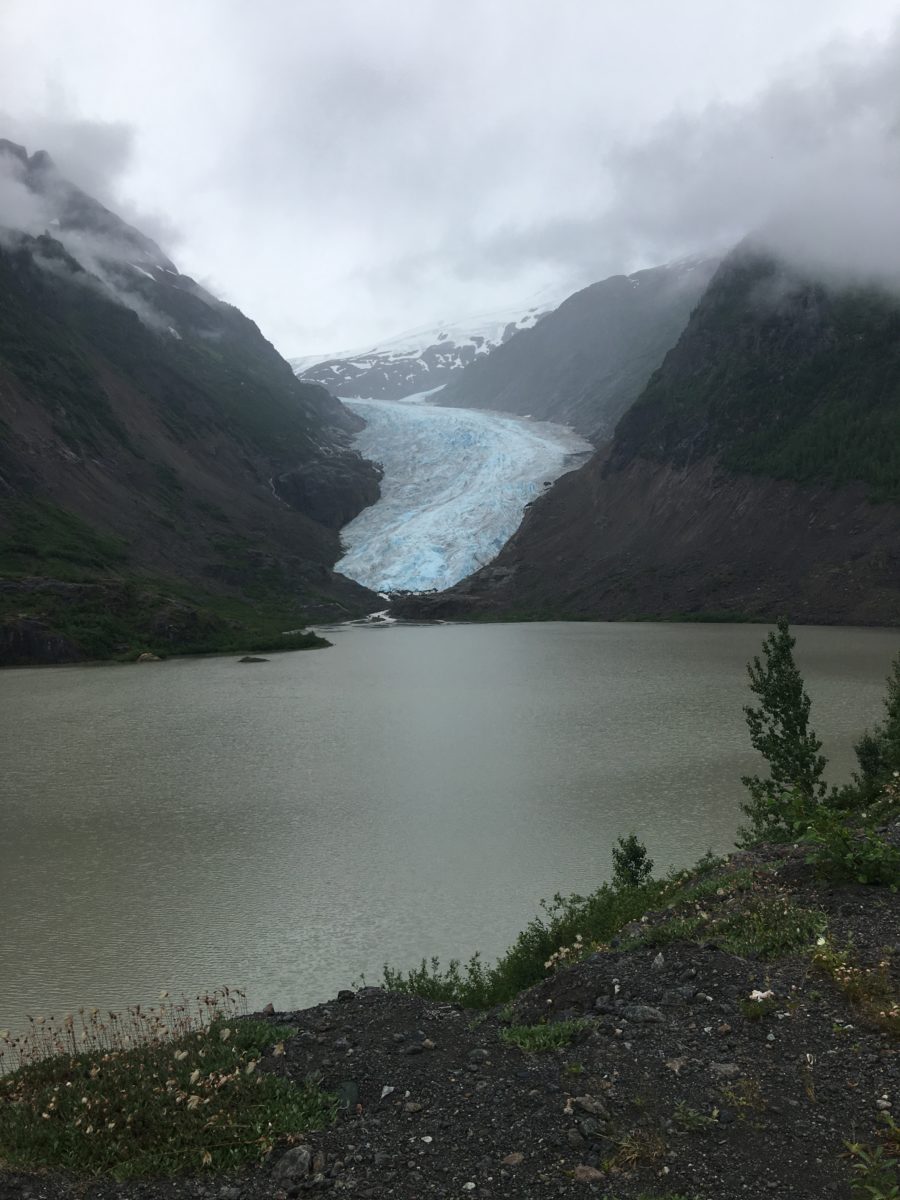 Bear Glacier along Stewart-Cassiar Highway, BC.

Our next stop was Williams Lake. It was here that one of our LTVs developed a transmission problem and had to be towed to Kamloops to the nearest Mercedes-Benz dealership that could work on the Sprinter chassis. Unfortunately, when the tow truck driver arrived to tow the LTV, he didn’t have the tools to detach the driveshaft so the van could be safely towed. Fortunately, one of our fellow owners traveling with us in the group did have the right tools, and the driveshaft was safely removed.

For this owner, the Alaskan Caravan adventure was over. Now he started a new adventure; getting a replacement transmission took weeks, and in the meantime he was camping behind the dealership in Kamloops. 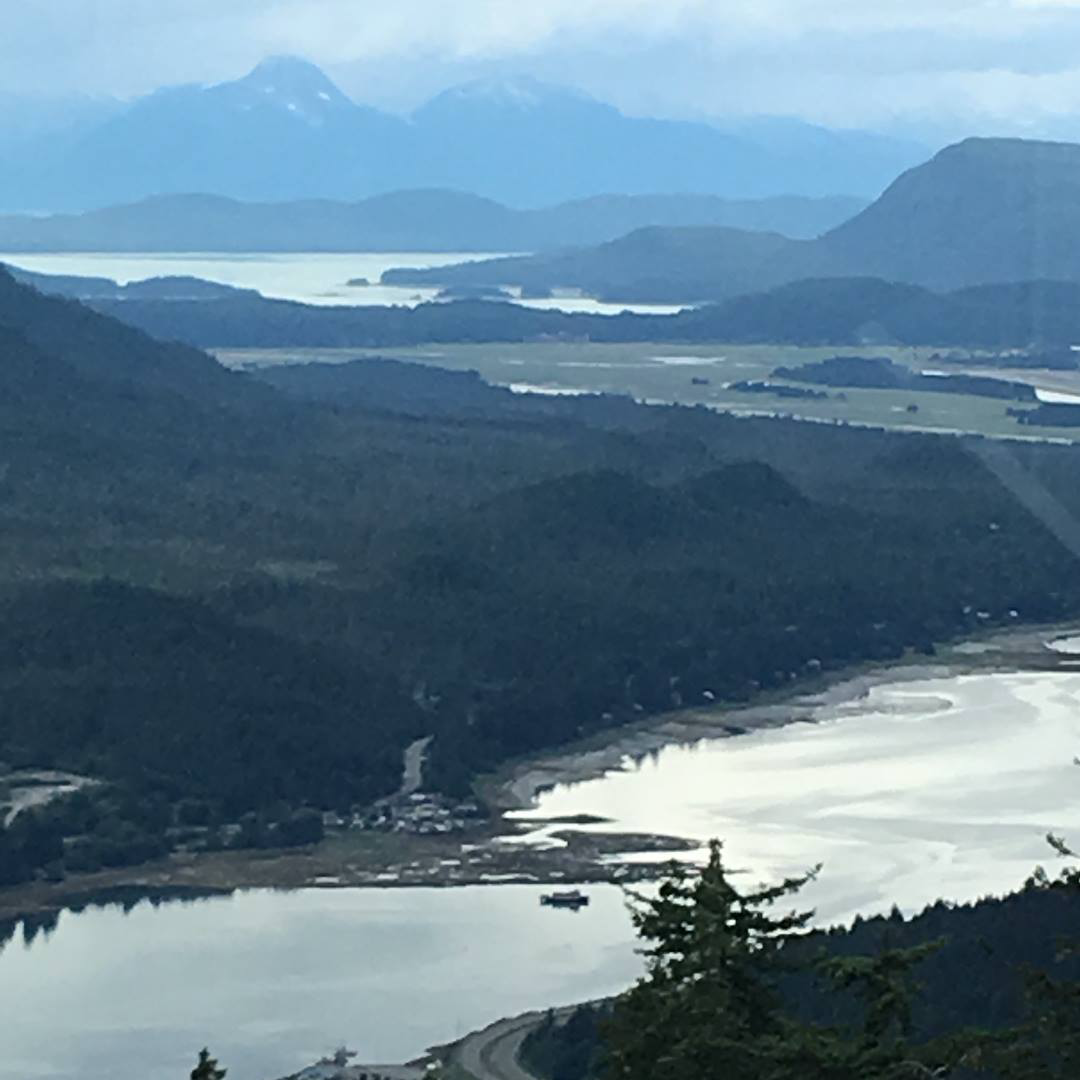 From Williams Lake, we drove back to Cache Creek and camped at Brookside Campsite for two nights. It was here at Cache Creek that the Alaska Caravan officially ended. Some owners continued on to what was supposed to be the end of the journey at Bothell, Washington, but most, including us, decided to part ways at Cache Creek.

We enjoyed a last barbecue with the group on our last night together. It was bitter-sweet but a great way to end our epic adventure! We had started this journey as 43 strangers, but we ended the journey as very good friends that still keep in touch, even though many of us live thousands of miles apart. 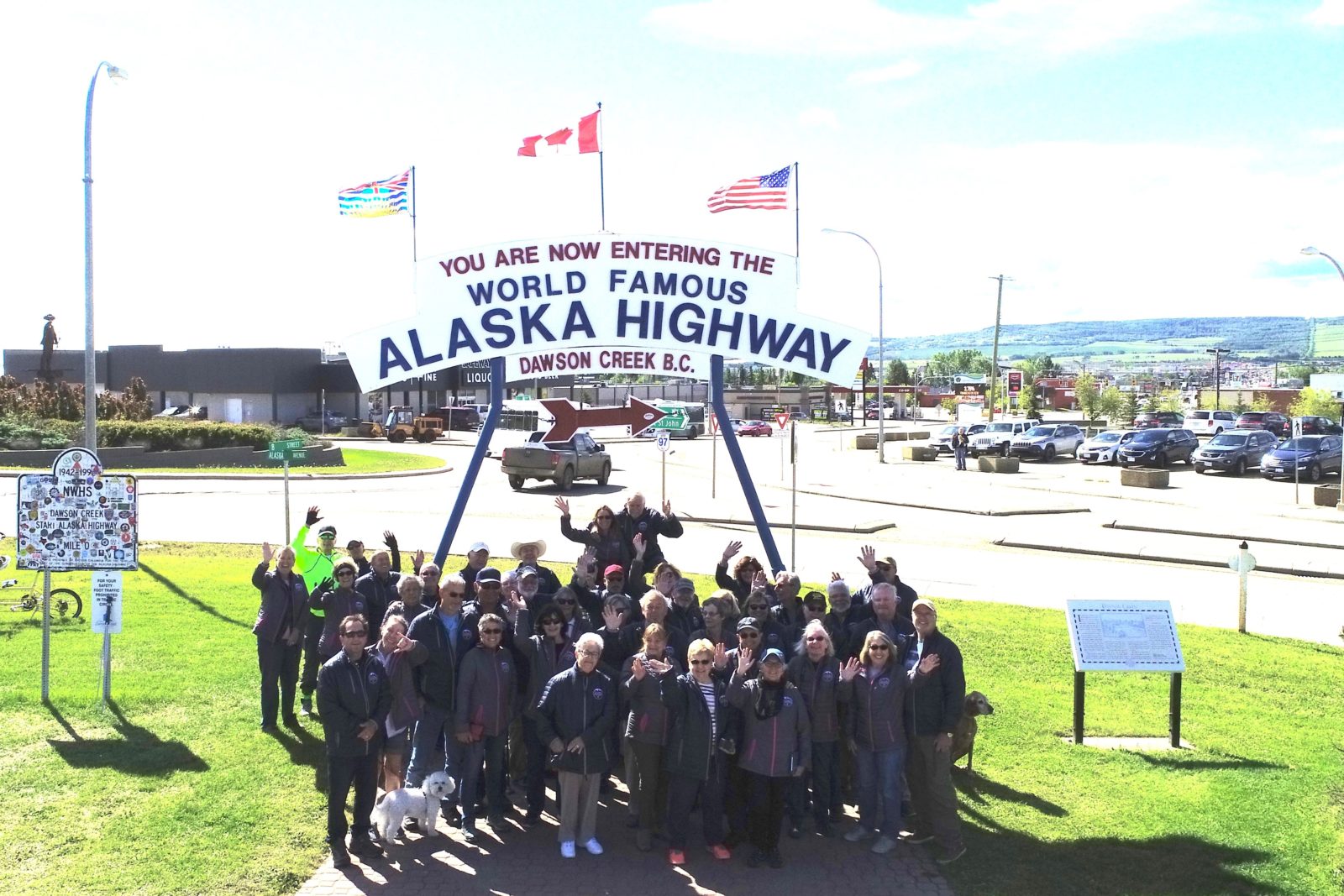 A takeaway from this trip is the value of traveling with fellow LTVers. Not only is there safety in numbers, but people are there to lend a hand whenever the unexpected happens and, of course, the camaraderie and friendship that develops from traveling together is a powerful, life-changing experience.

See you on our next adventure – our trip to Winkler, Manitoba, and the annual Owners Rally! Or perhaps we will see you on the road… 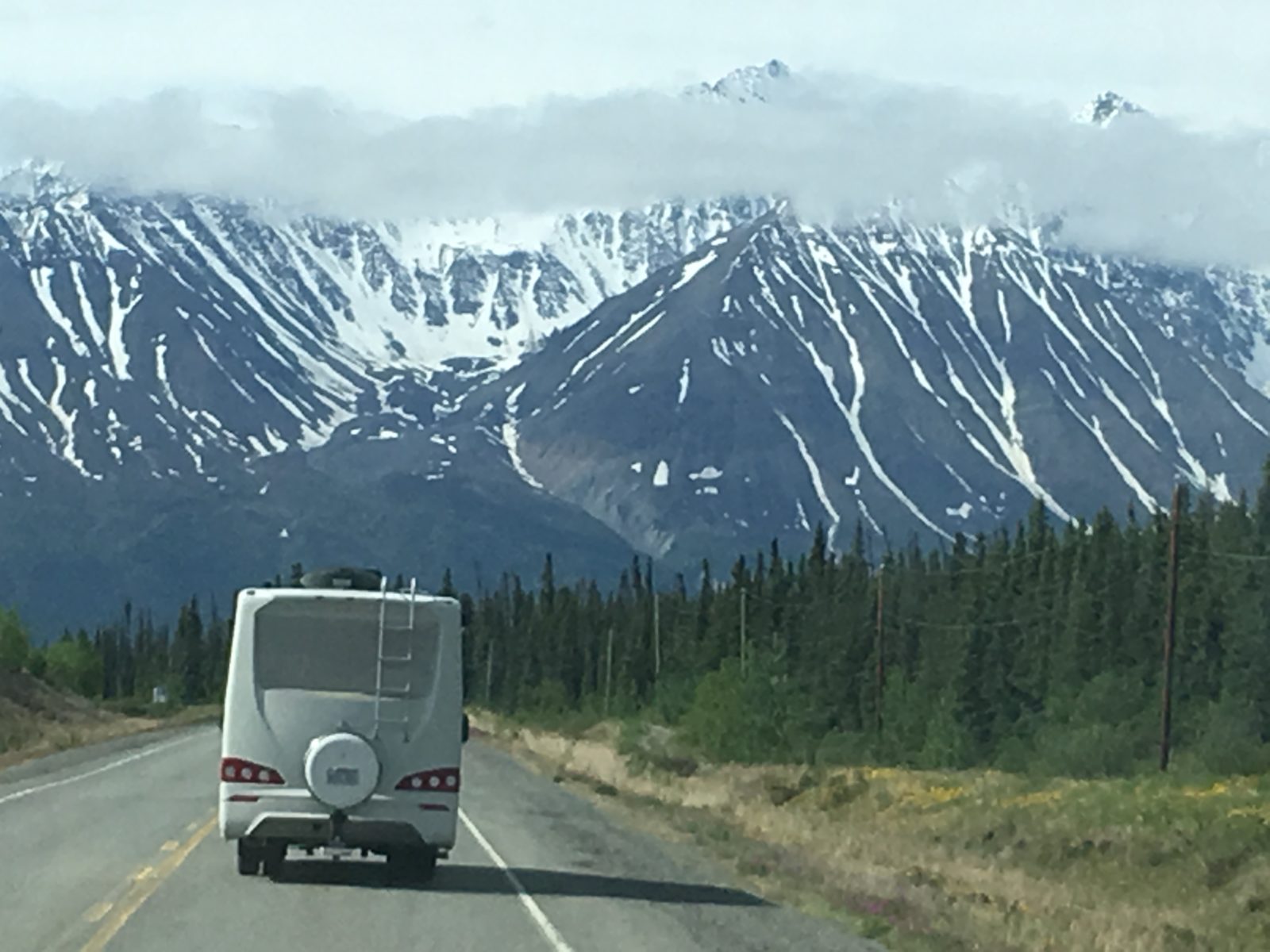 Somewhere on the road in Yukon.