An Odin Adventure: On the Road Again 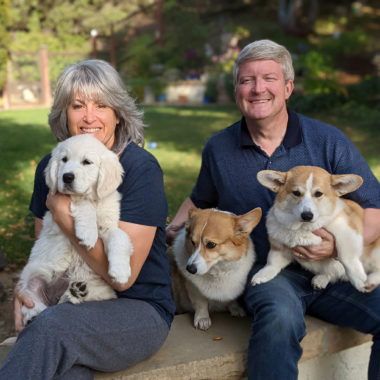 Editor’s Note: Mark and Hilary Steves are members of LTV’s sponsored content team, The Leisure Explorers. Do you own a Leisure Travel Van and enjoy writing? Learn more about joining the team.

Here’s another story by Odin the corgi, about our first trip in a while in our 2018 LTV Unity FX.

It’s been an awfully long time since Mom and Dad took us out in the mobile house they call Zephyr. Not really sure why we’ve been at home so long, although I haven’t really minded it – lots more time with them. Still, it’s exciting when I see them start to load up the mobile house as it sits in our driveway. Time for another adventure!

This will be the first trip we take with my new brother, Thor, so we’ll see how he does. Me? I’m happy to be on the road again, and curious where we’re going. The last few times we haven’t gone far, just up the road to wineries for some of the red juice that Mom and Dad like. I’m kinda figuring that’s where we’re off to this time, especially as that’s the direction we’re heading. And, sure enough, when we’re about 2 hours north at Paso Robles, we turn off the highway.

Hmm… I don’t think we’re going to those wineries this time. We drive past a few, but keep going farther out. After a quick stop for lunch, we pull into a place called a “campground.” Dad says we’ve arrived, and we’re at Lake Nacimiento. Hard to say (and harder to spell), but I see lots of water in the distance.

This campground seems nice, with lots of parking spots, and it’s EMPTY. I count only 4 other mobile houses there when we arrive (which is good, as I only have four fingers). We have a spot separate from the other mobile houses, and Dad does his setup routine, which is pretty fast. He presses one button and the house gets bigger. He presses another and it gets more level. Then he hooks up two cables to the outside and we have power and water. Other mobile houses seem to take longer. Not sure what they’re doing wrong. (Editor’s Note: We stayed at Oak Knoll campground at Lake Nacimiento Resort, which provides full hookups and was quite empty for the weekend we were there). 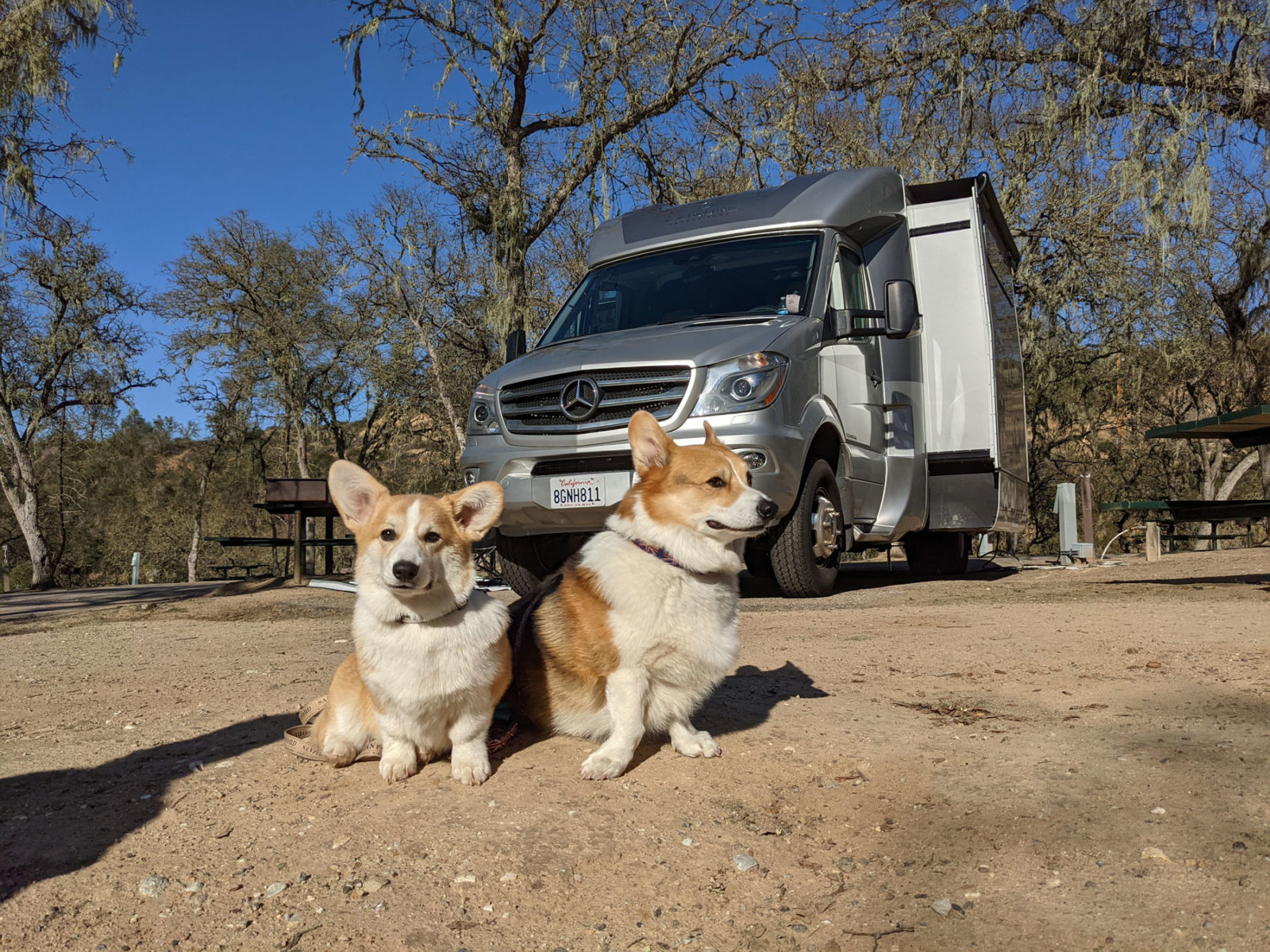 Thor and I are ready to explore!

Soon after we arrive, it’s off on a nice hike. We take a meandering path down to the lake, and while we’re kept on a leash the whole time, it’s a nice walk and soon we’re at the water. Unfortunately there’s no beach, and access to the water is pretty steep at most places. We walk back to a place where other people are putting floating cars into the water (Dad calls them “boats”) and we can get to the water’s edge there. It’s too cold for me, so I’m content to stay on dry ground. But Thor is happy to get into the water and splash around a bit, even trying to bite at some of the waves that come in. He’s just a puppy, so I’m not too embarrassed by his actions. 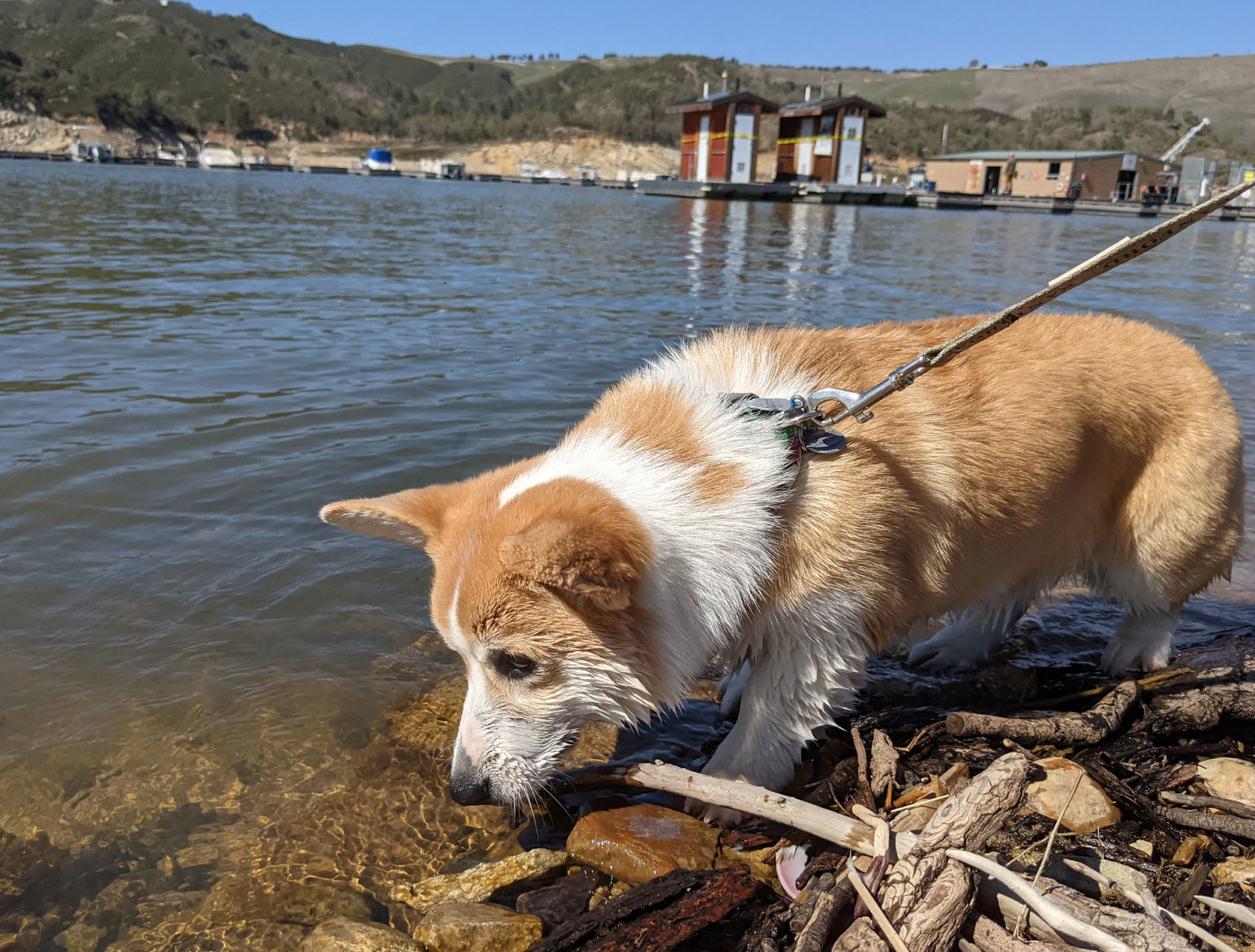 Thor likes playing in the shallow end of the lake.

Mom and Dad stay out of the water (as I said, it’s cold), although apparently this lake is one of the few in the area that we all could go swimming in if we wanted. Instead, we coax Thor out of the water and walk back on a nice 5K dog path. It’s a long walk, so we’re pretty tired after we get back. We all sit outside for a bit, with Thor and I taking a nap while tied up to a weight, and Mom and Dad open up some red juice they brought. After it gets chilly, we head inside for dinner. When it gets dark we go back outside so Dad can take some pictures of the shiny lights in the sky. The rest of us get bored quickly, so we head back inside and get warm for the night while watching a movie. 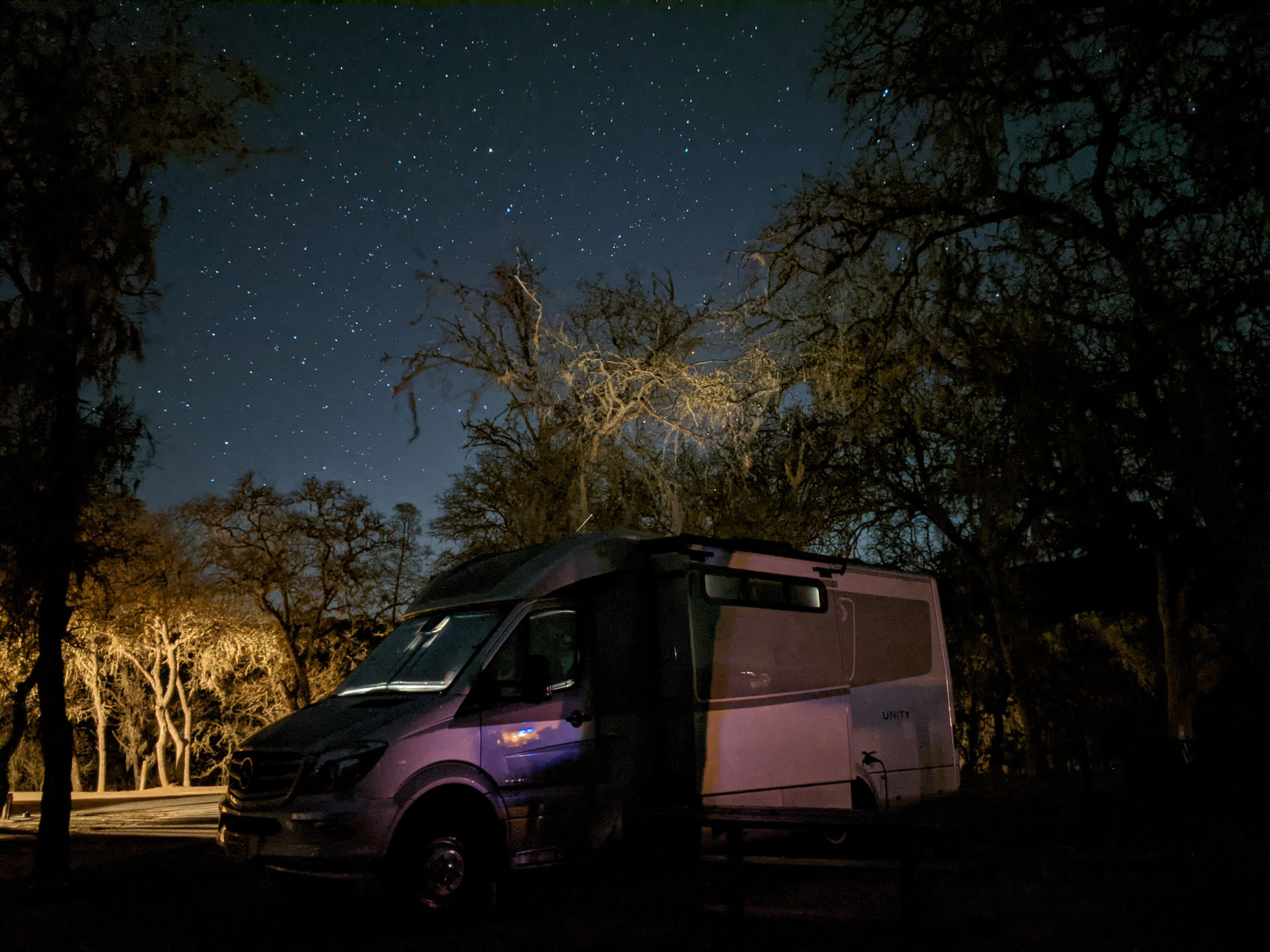 I figured the next day we’d pack up and move on. That’s pretty much what we always do, and Dad says it’s one of the reasons we got the type of mobile house that we got. Instead, we stay put. We sleep in, have breakfast, go for a walk, take some pictures, then come back and lie around while Mom and Dad play some games. Then we go for another walk, and then back for more games, dinner, and more games until we all go to sleep. That was a pretty calm and nice day. I don’t mind traveling around, but it’s nice to sit still now and then. And the mobile house is pretty comfortable for this. 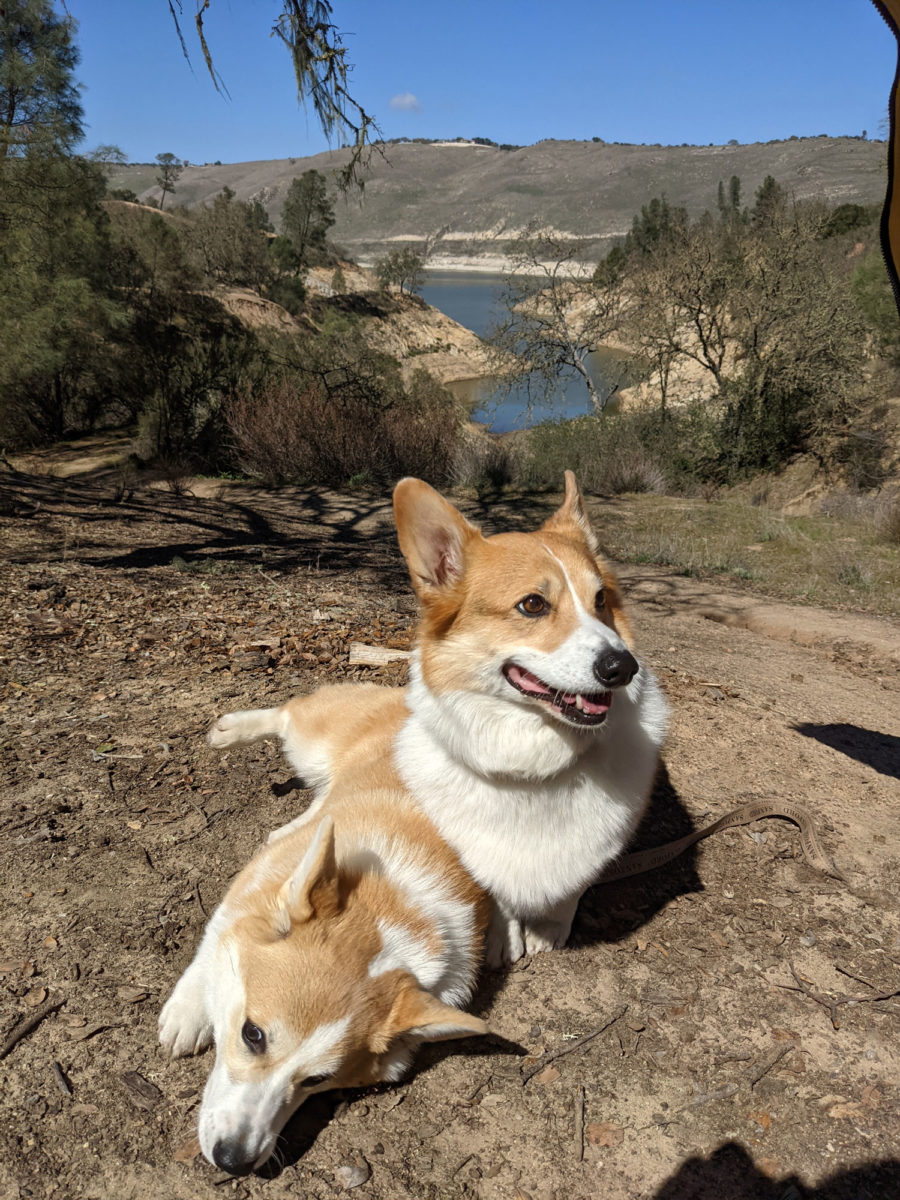 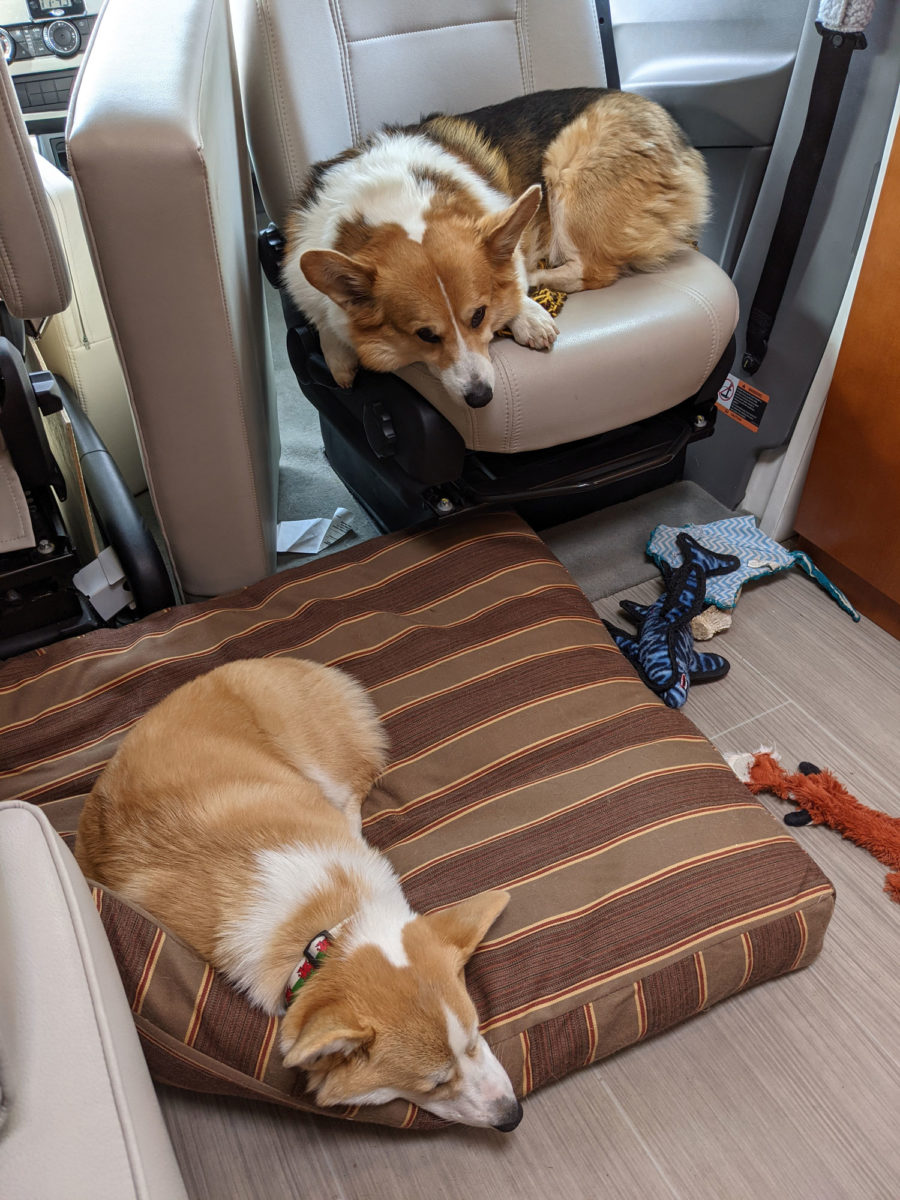 The next day we start packing up, so I figure we’re going home. It’s a quick disconnect from everything and then we’re heading back to town. But we turn right before reaching the highway and soon are pulling into a miniature castle. There’s a moat and everything. (Editor’s Note: We started at Tooth & Nail Wine Company in Paso Robles, which has a castle look to it). 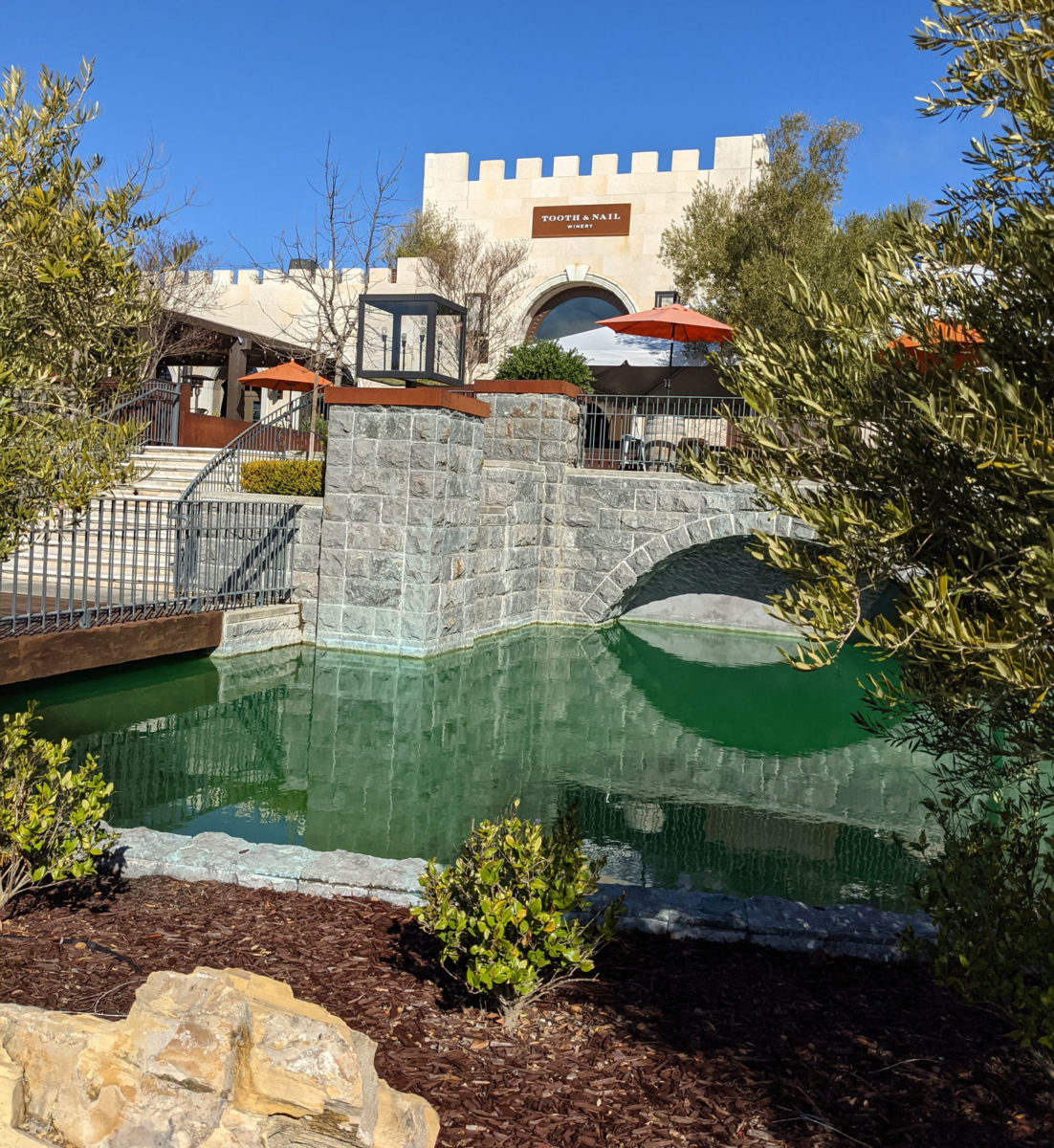 This place has an actual moat. But Thor and I weren’t allowed to swim in it.

We don’t get to go inside, but we have the large outside patio to ourselves as we sit down and Mom and Dad start tasting the red juice. We spend some time here before they buy a bottle and we head off… across the street. We park the Zephyr around the back of this winery. (Editor’s Note: This is Dark Star Cellars which is a Harvest Hosts site and where we spent the night).

Instead of going inside, we walk next door to another winery called Grey Wolf (although I don’t see any wolves, or even other dogs, there), where Mom and Dad get more red juice as well as some food for lunch. Which they don’t share. How rude. Then, back to the Zephyr to drop off some bottles (boy, the Zephyr sure is handy to have around!), and then we walk to the other side to a third winery called Midnight Cellars. 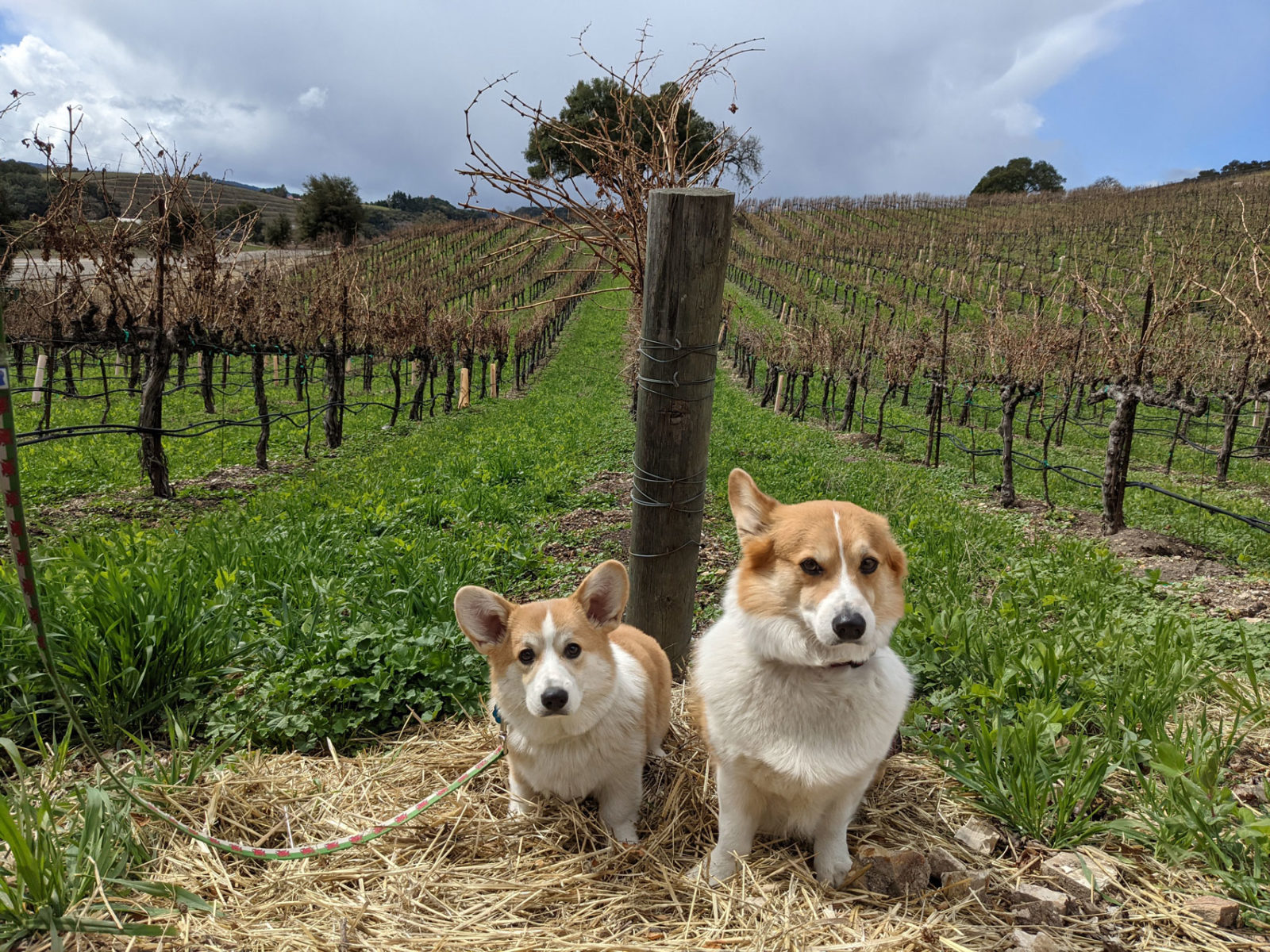 Even walking between vineyards, we have to stop for photos 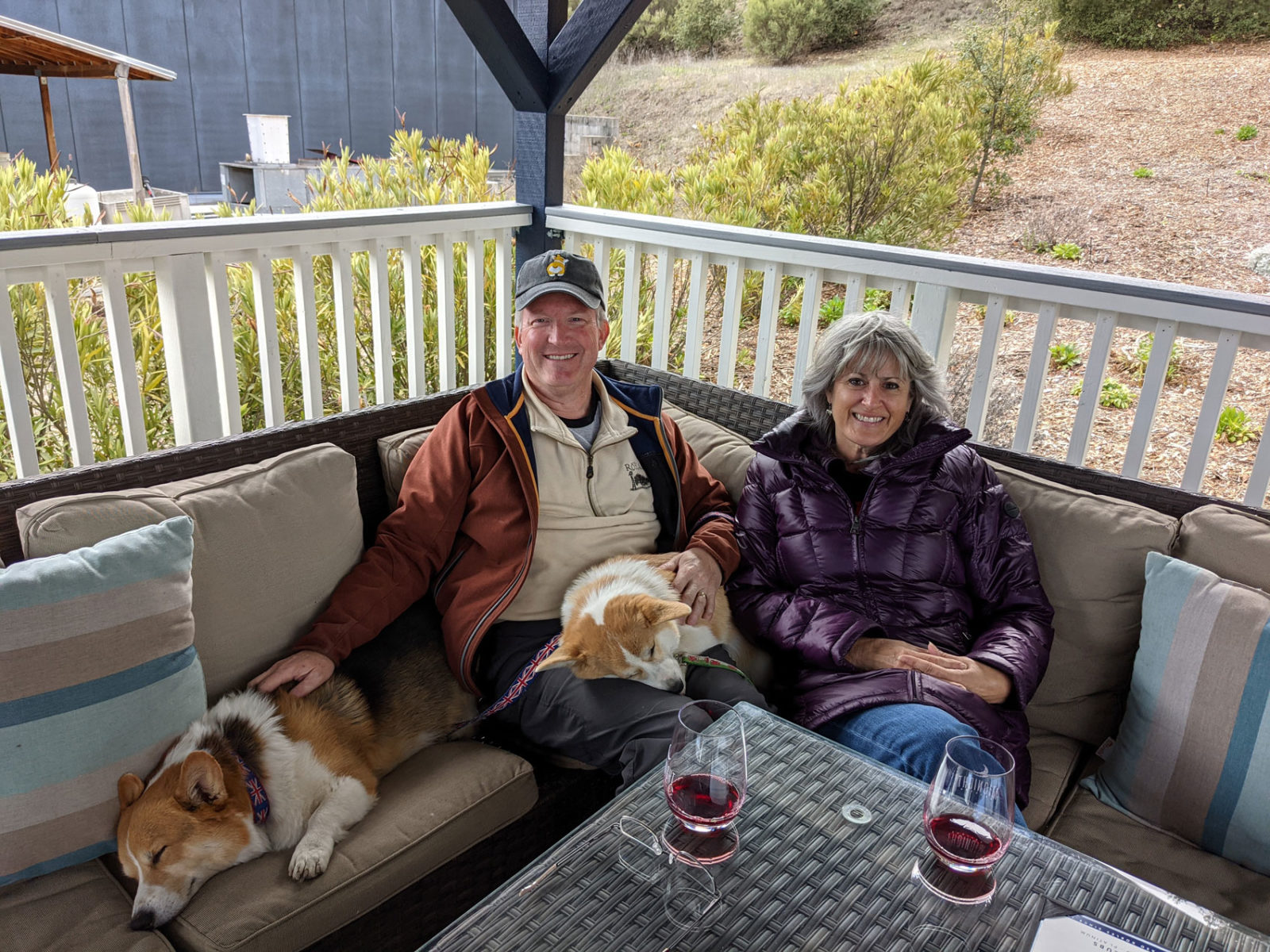 Much better to sit and relax.

And… more tasting of red juice. Finally, we’re back to the place we parked at for one more round. After that, we’re back to the Zephyr where Dad makes the house bigger and more level, and Mom makes dinner. Thor settles on the bed with them while I enjoy my bed on the floor, and they watch a movie before it’s time to sleep.

When we wake in the morning we take a walk down the street after breakfast, checking out some other wineries that Dad says we may visit “next time.” We have a leisurely morning, and soon enough we’ve made ready for travel and are back on the road. Mom and Dad say we’re going home today, but have time to visit another couple of wineries before that. Our first stop is a nice place called Hunt Cellars. The person pouring the red juice is really nice, and gives them a bunch of tastings out of smaller bottles (Editor’s Note: We got a tasting of port wines, which were amazing). 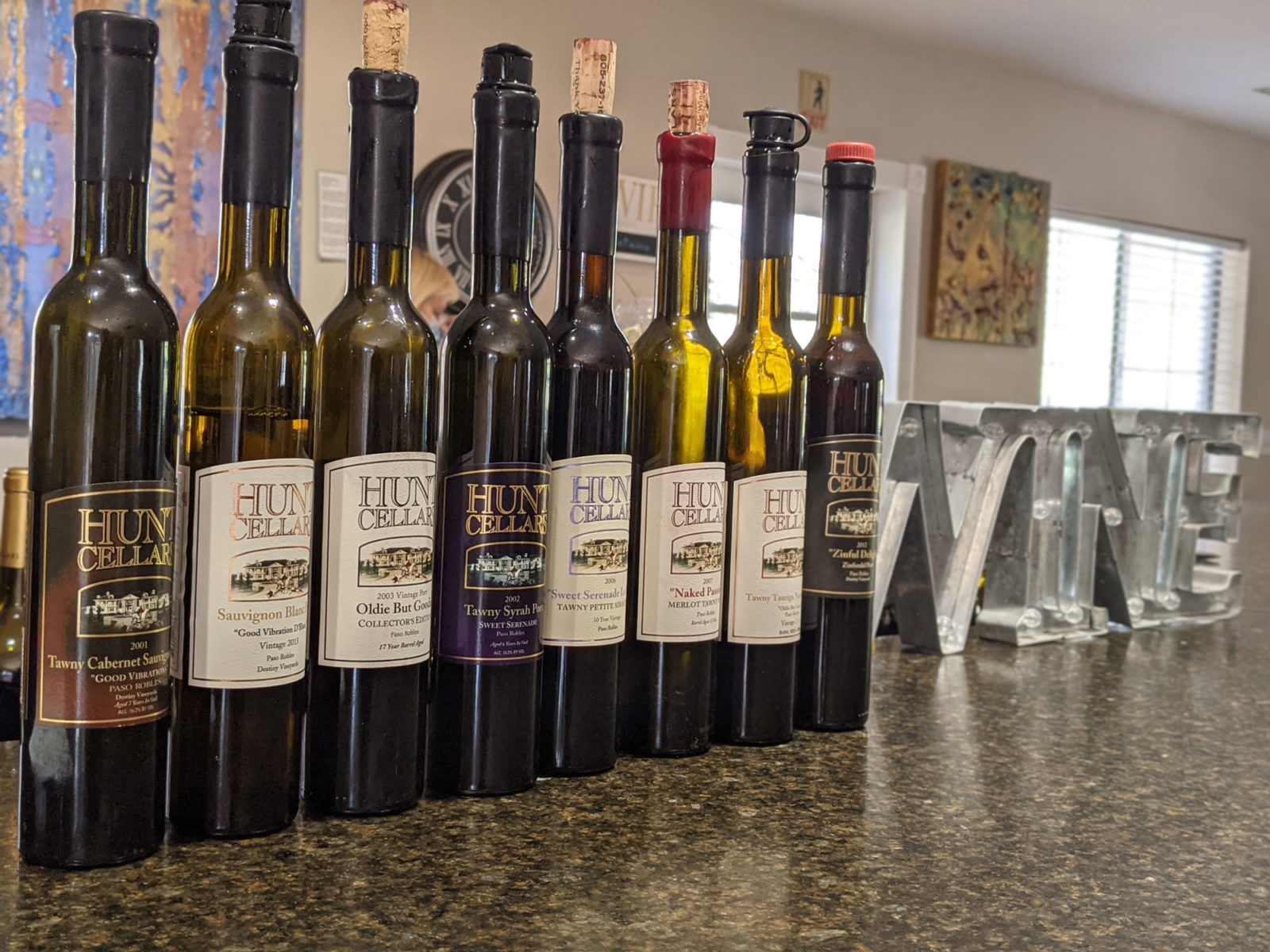 A flight of ports. Mom and Dad say it’s not a bad way to start the day.

Even better, for Thor and me, they gave us water and treats! Then he took us down into the basement (he called it a “cellar”) where he poured some red juice right out of this big wooden barrel. Not sure why that’s more special than out of a bottle, but they seemed to like it. We spent a lot of time there, but eventually moved on, driving up a big hill to Croad Vineyards, which has amazing views and a large multi-level patio. We were the only ones there, so we sat on a balcony looking over the green hills. I could feel the calm coming off of Mom and Dad. I think they really needed this trip. 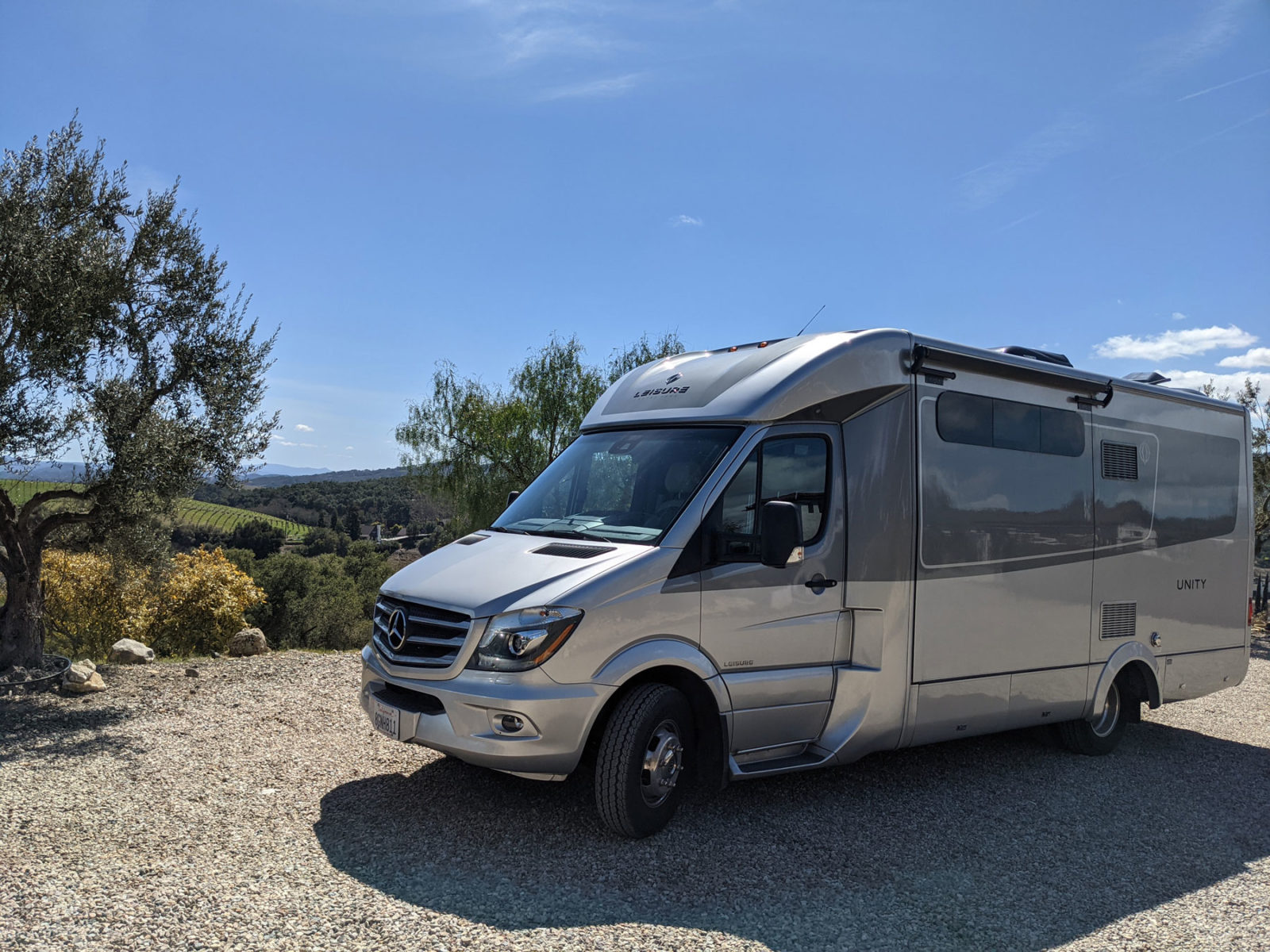 However, all trips eventually must end, so after this last winery we load up and drive home. Thor and I were pretty tired, so we were kinda glad to be back. Thor did a very good job while out on his first real trip with the family. I just hope that it won’t be that long until we’re on the road again. 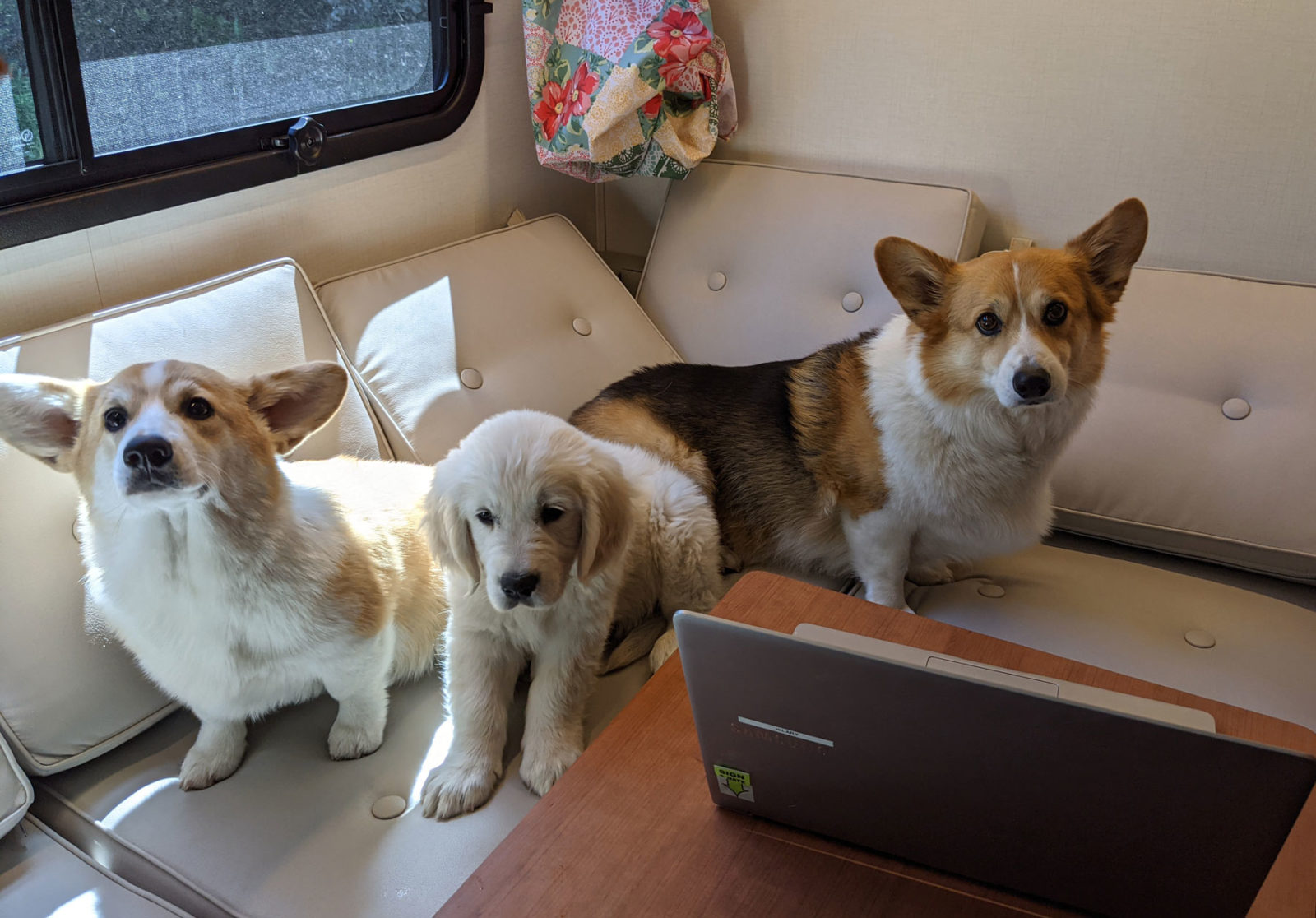 Odin the corgi likes peanut butter, meeting new people, and taking trips with his parents in their mobile house. With his new little brothers, Thor the corgi and the latest addition, Apollo the English Cream Golden Retriever, Odin looks forward to more trips in the near future. Check out his other stories on his parents’ Leisure Explorers page.

We are relatively “new” RVers, with our 2018 LTV Unity FX our very first one. Mark is retired from the Air Force, and while he's still working (for now), we're finding time to take our LTV "Zephyr" around the Central Coast of California with our three dogs – Odin, Thor, and Apollo. As members of the Leisure Explorers Team, we look forward to sharing our trips and stories as we embark on new adventures and hope to see you on the road.