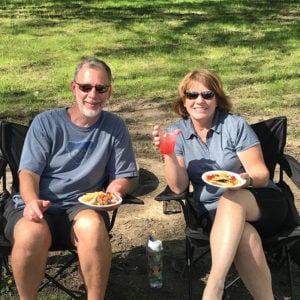 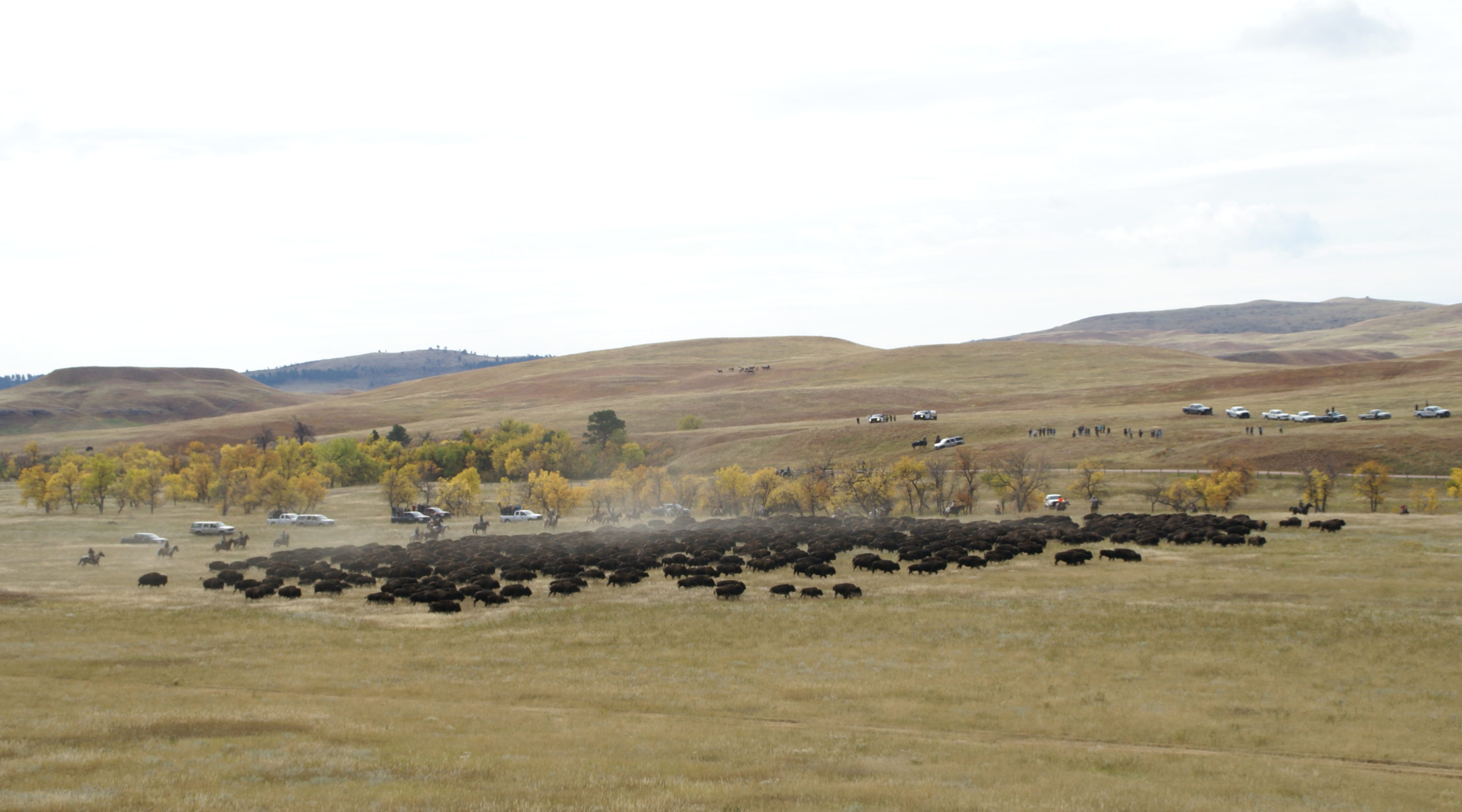 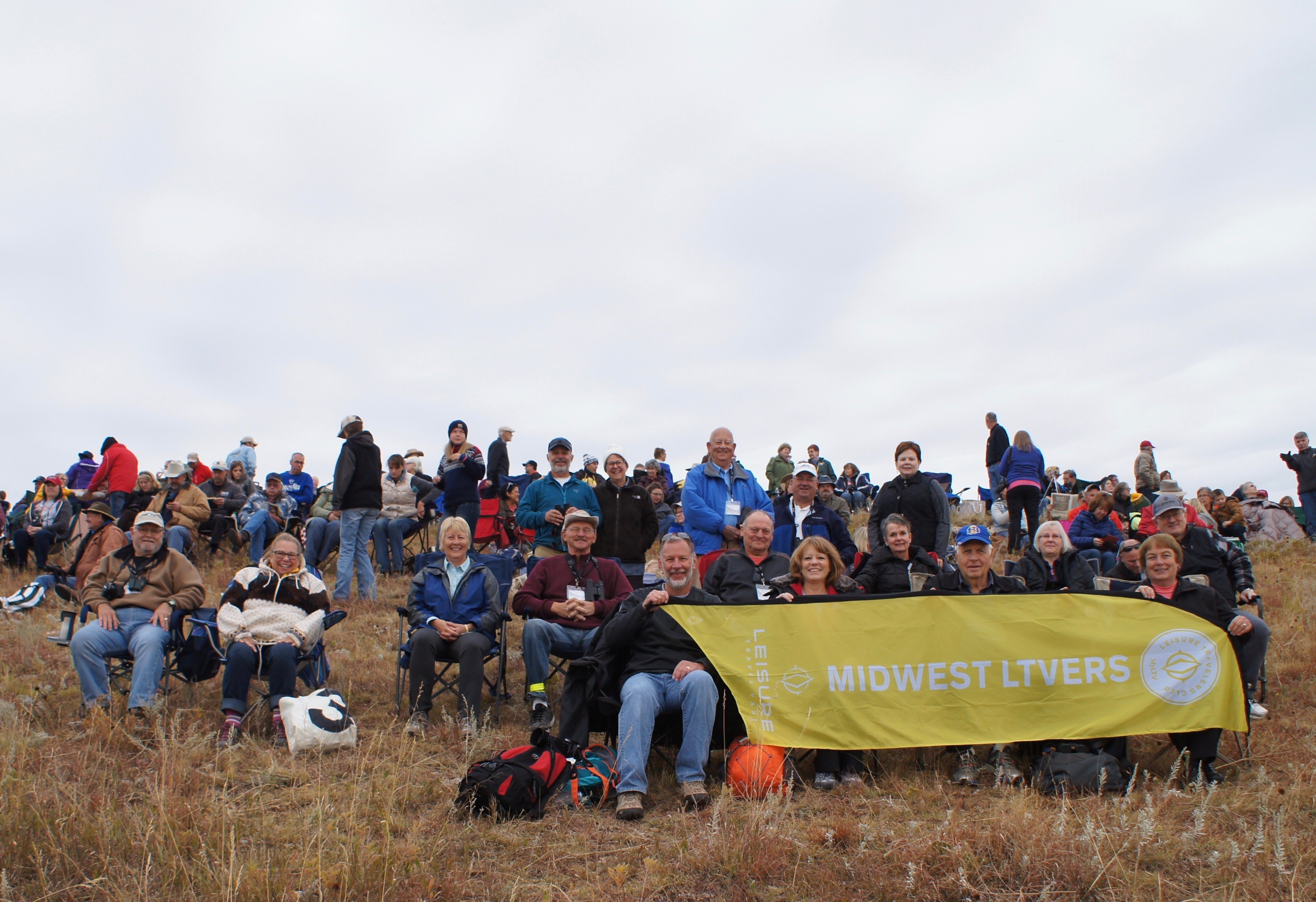 Today was the well anticipated Buffalo Round Up at Custer State Park. We woke up to the cool, crisp morning air and were ready to go at 5:30 am. We started to work our way though the campground and a convoy of Unitys formed. A total of 8 of us caravanned the 45 minute drive to the Buffalo Round Up. As we drove in the dark, the parade of lights from our coaches lit up the highway. It was a sight to see. As other cars approached, you could see the amazement in their faces as they saw us. 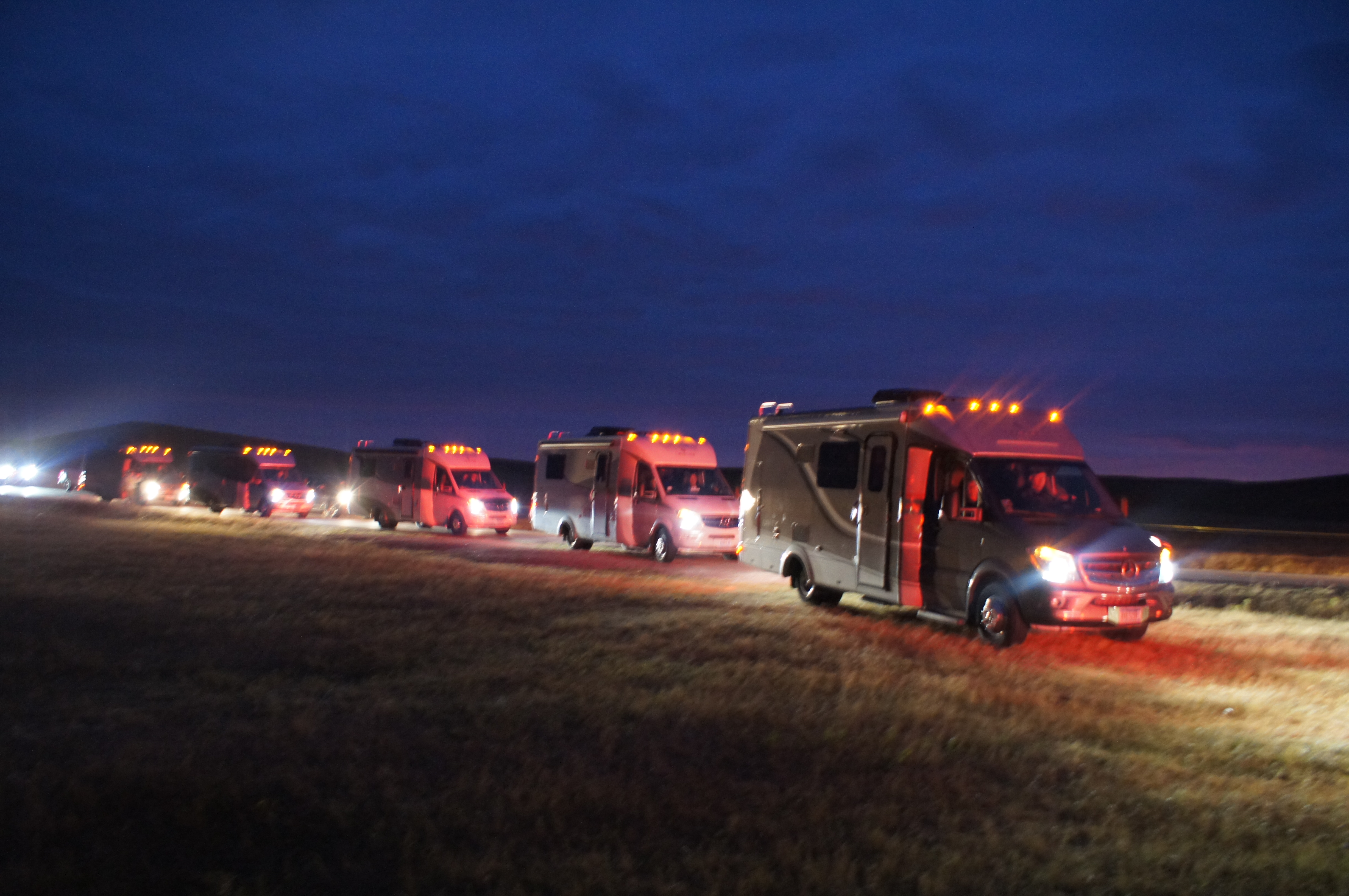 We continued to drive the winding roads, and as we got closer, I was able to see for myself in the sideview mirror what everyone seeing. These 8 LTV’s rounding the curves in the road of the wildlife loop. It was a sight to see.

It wasn’t long before we arrived at the parking area. I jumped out of the coach to get a picture of the arrival. The parking attendant was almost giddy with excitement to see us. She had lots of questions for me. And in the distance I heard the other 2 parking attendance say, “yea, that’s cool…they are all staying at the North Stockade Campground”…I guess we do make a statement where ever we travel. 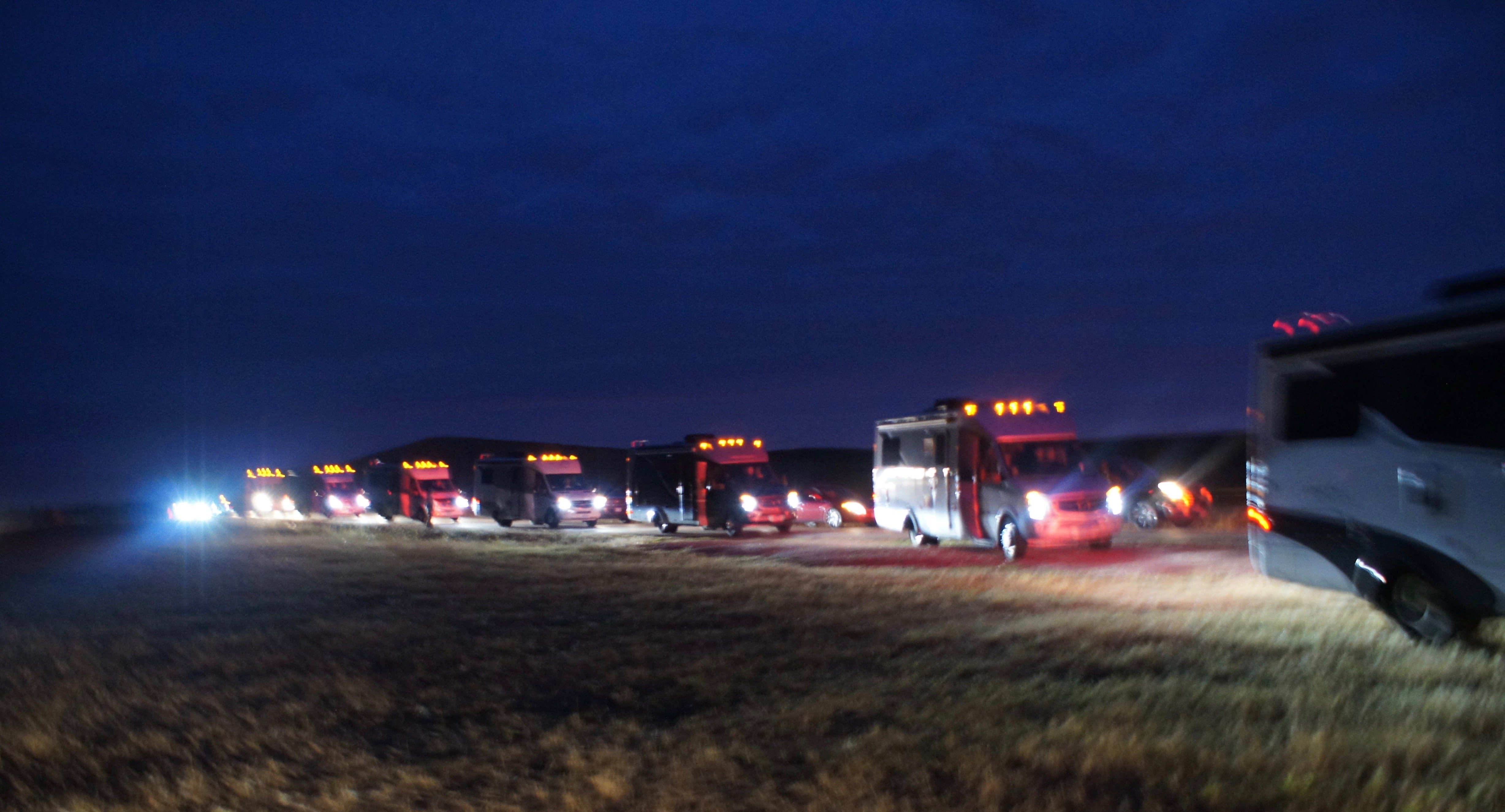 The sun was starting to rise as we all exited our coaches. Time for more pictures. You could feel the excitement in the air, and a few yawns too. But it will be worth it when we see those buffalo running to the corral. We grabbled our backpacks and chairs and headed off to find the perfect viewing location along with 15,000 of our closest friends. 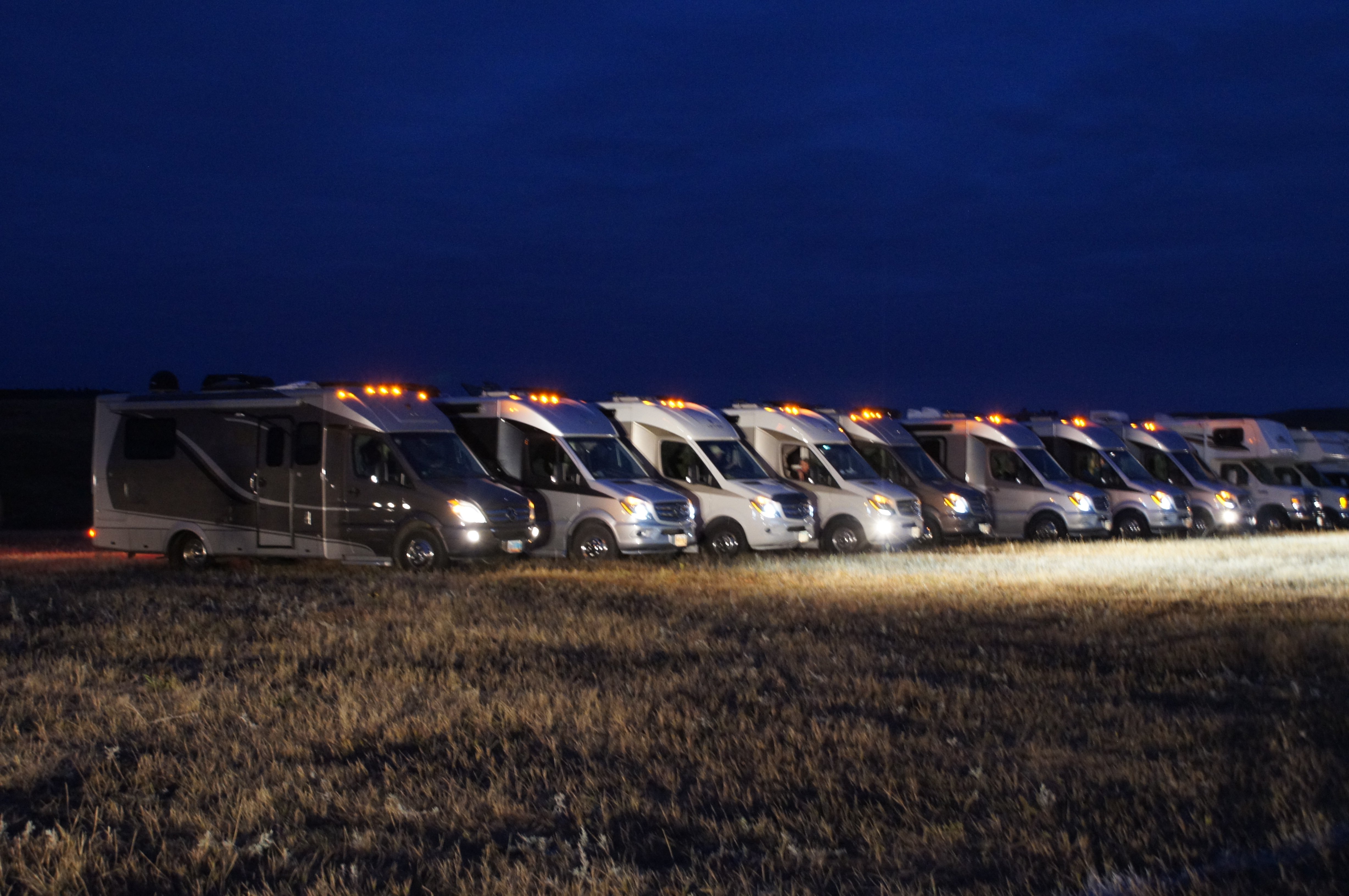 We climbed the hill and found the perfect spot to view the round up. Now to get set up and pass a little time…the buffalos were not expected to arrive until about 10:30. We sat back (the best we could in a chair on a hill) and exchanged ideas, stories and got to know each other better. Part of the fun of owning a Leisure Travel Van.

As the arrival of the buffalos grew closer…we could see something in the distance. Is it finally starting? But to our amazement, it was just 2 buffalos. LOL I guess they decided not to participate in the stampede. They arrived without the rest of their other 1298 buffalo friends. They were majestic beasts, standing tall as if they knew we were all there to see them. As we were watching them, we saw something coming over the hill…the crowd grew with excitement once again. Finally (we thought), the stampede begins. And what do we see…about a dozen burros coming over the crest of the hill. They stopped as to take a bow. The crowd laughed. I couldn’t help but think they felt a little left out. Weren’t we all there just for them!

We were beginning to think the buffalos didn’t get the memo that the round up was today, or maybe they did and they decided not to participate this year. We have been seeing the cowboys on their horses and the 4 wheel vehicles…but still no buffalo. 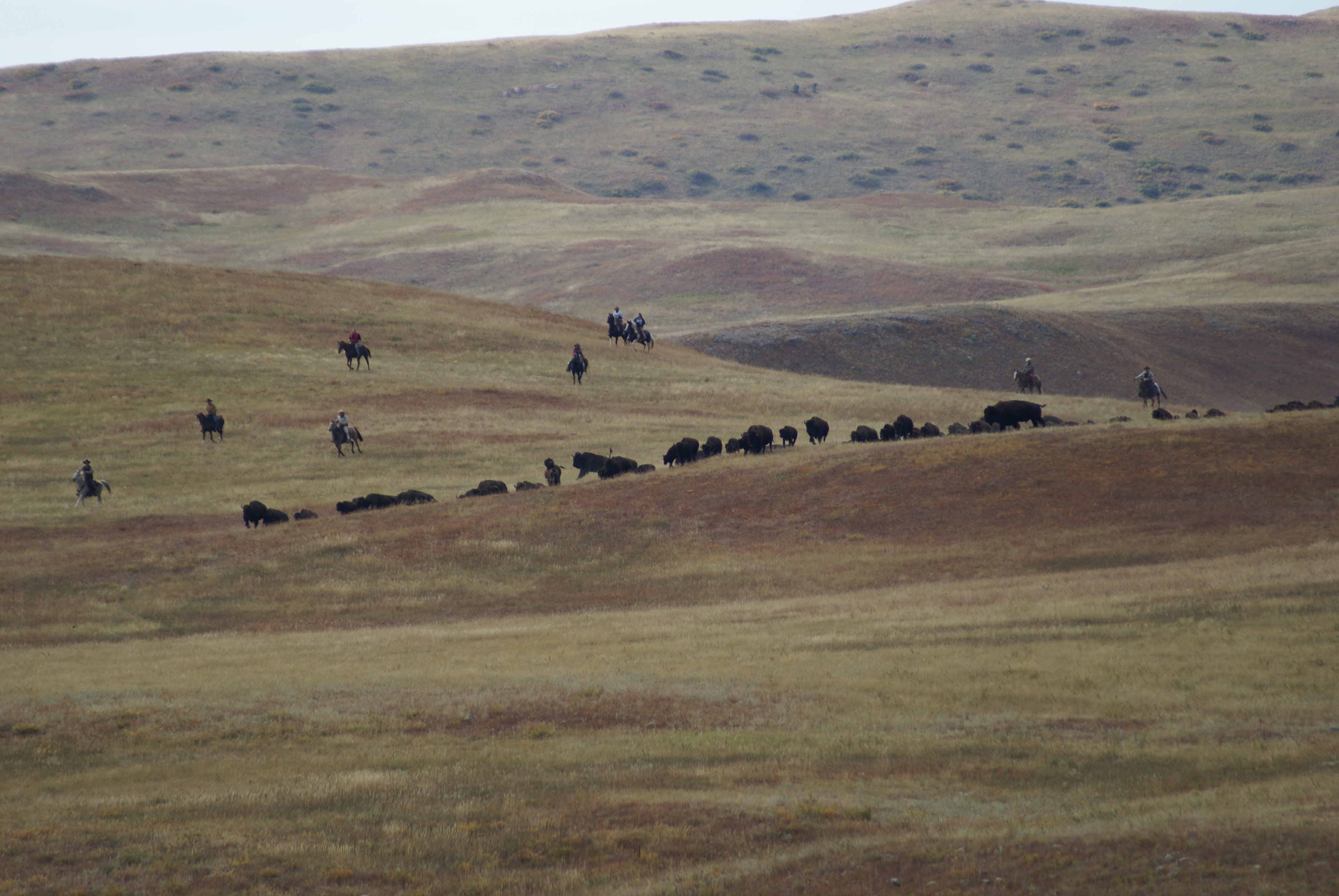 Then finally…we started to see dust floating in the air just above that hill…here they come 1300 buffalo running down the hill and into the pasture. 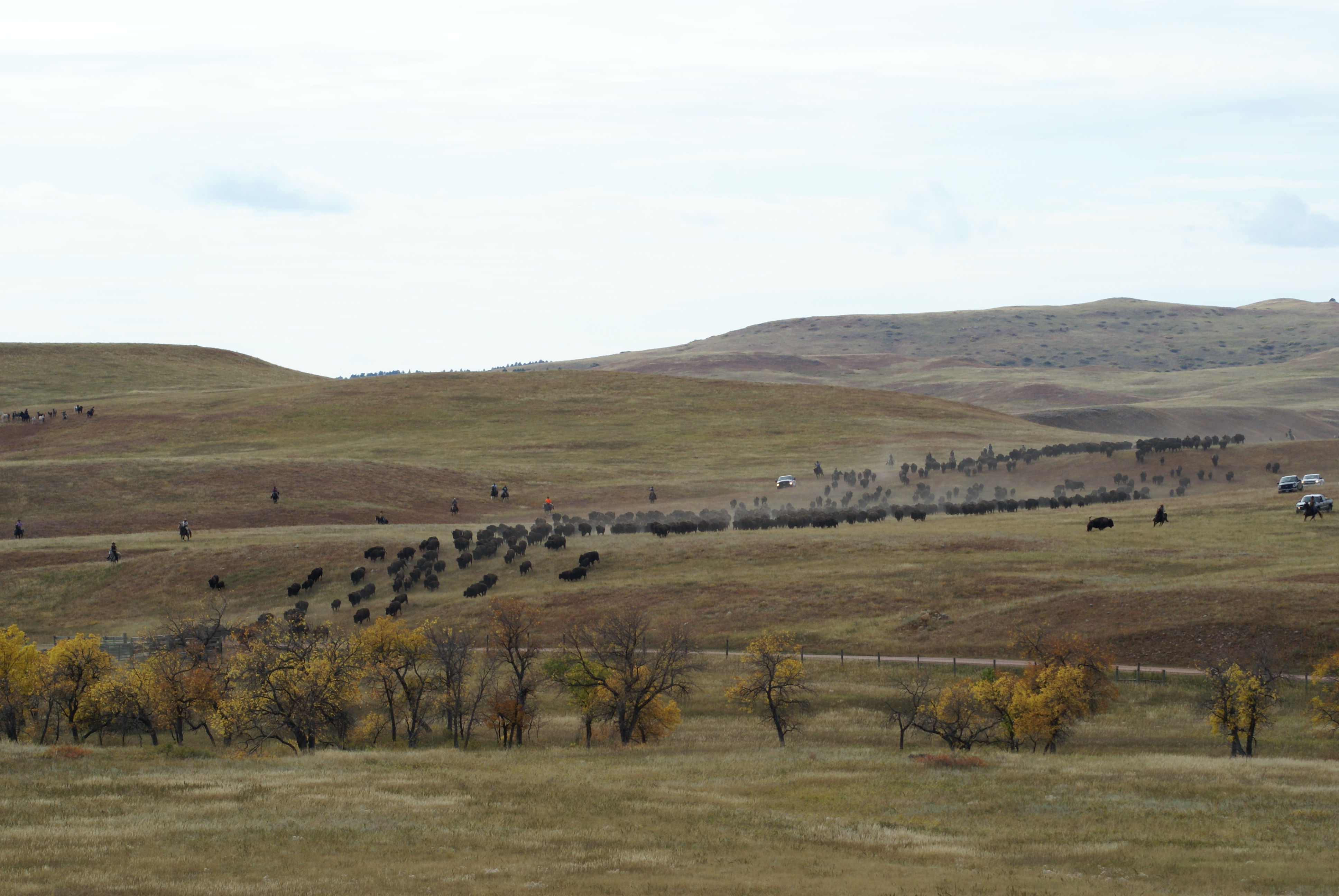 You could hear the cowboys hooting and hollering as they snap their whips as they herded them to the corral. 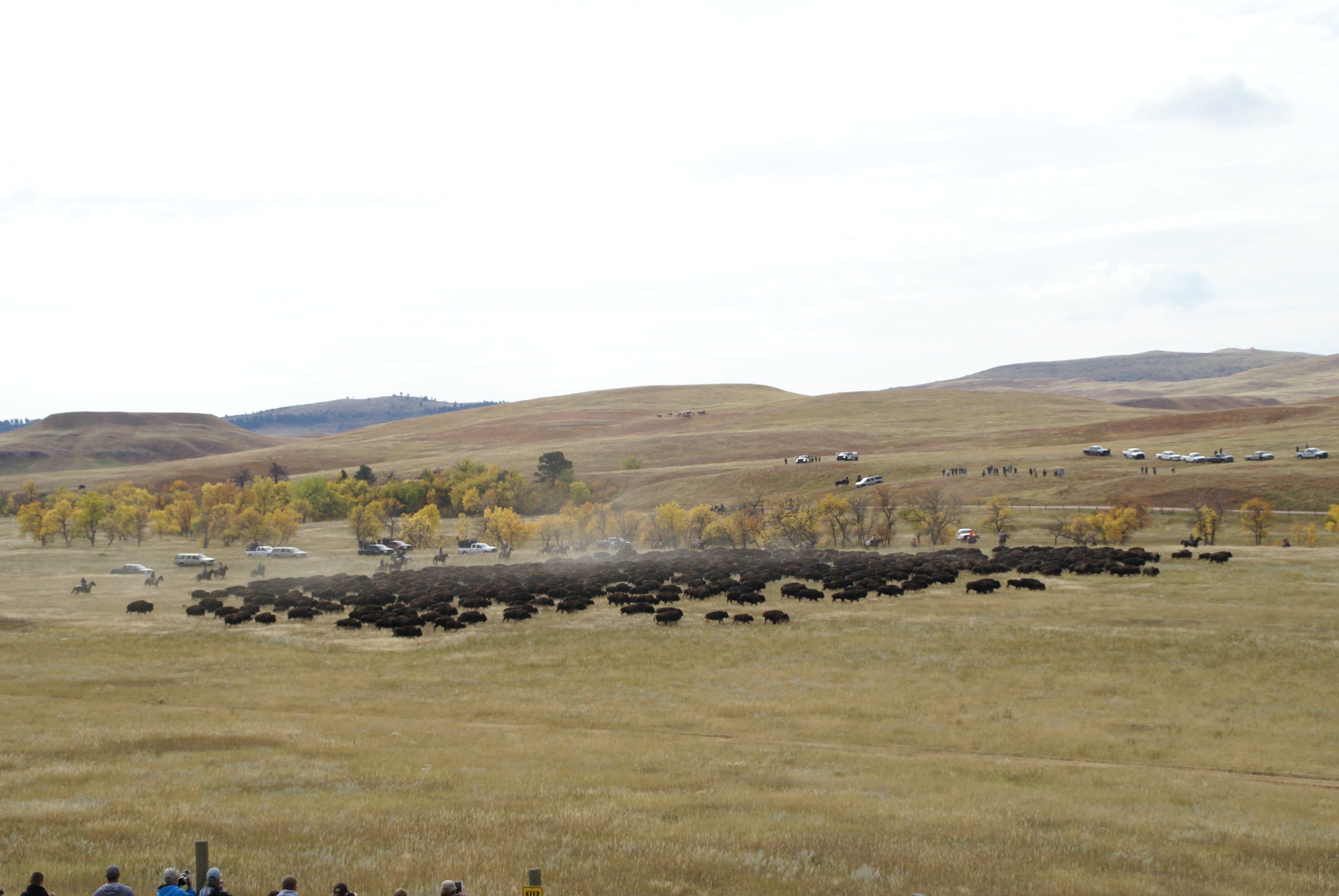 These majestic creatures were running right in front of us. It’s not every day you get to see this. After they were safe into the corrals, you could go down to the corral and see them up close and personal. This is an event that everyone needs to attend.

It was an early morning but well worth it. After it was over, we headed back to the parking area. You could see a line of cars as far as the eye could see. We all decided to sit tight, grab some snacks and exchange each others company. It is so nice to have a home on wheels where you can enjoy all the comforts of home while you wait out the traffic jam.

Shari Froemming works from home as a independent consultant for a scrapbooking and stamping company. She loves to travel with her husband Stacey. They own a 2016 Unity IB.