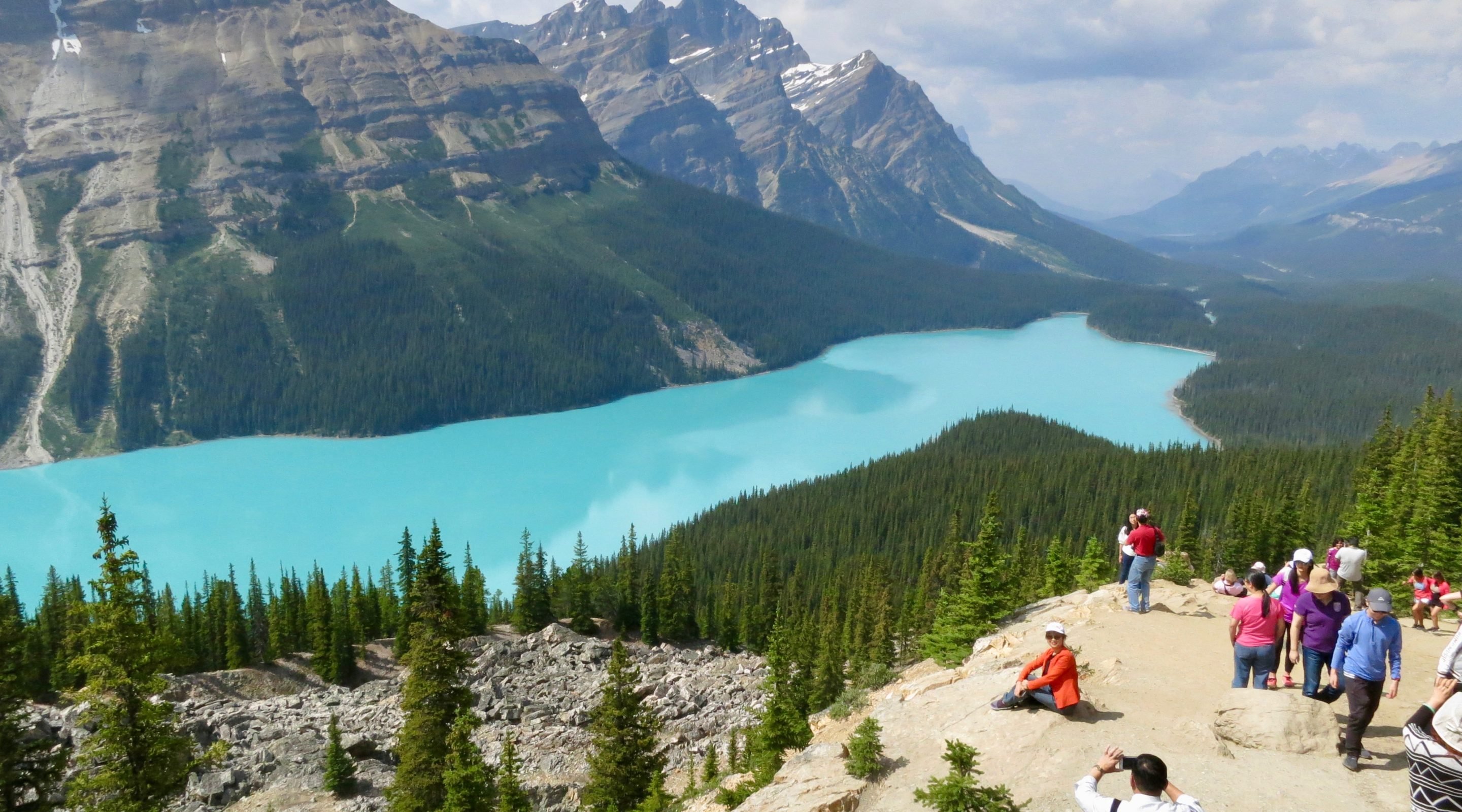 In Part I of this story, we drove more than 1,600 miles in Lucky Us, our 2015.5 Leisure Unity MB, from Michigan to Glacier National Park to see the Crown of the Continent. In Part II, we drove another 200 miles north to Calgary, Alberta, Canada to fish the Bow River. And now for Part III of our series, we head just 78 miles west of Calgary to the town of Banff, Alberta, where our adventure into the Canadian Rockies begins.

The Unique Beauty of the Canadian Rockies

If you’ve been to the Rocky Mountains in the United States, you might wonder why you need to see more of the same. Well, there is a difference. When visiting the Canadian Rockies you will see jagged, ice field-capped peaks, alpine lakes and glaciers, and most notably, stunning opaque turquoise water flowing through the area’s rivers and lakes.

Many of the rivers and lakes in Banff National Park are painted this intense liquid turquoise color, and every time I happened upon it, my reaction was the same: Mesmerized. Captivated. I stared in wonder and wondered what geological element dyed these waters with such vividness.

It turns out that the colorists here are the glaciers capping the mountains. As the glaciers melt, they grind or erode the rock, creating silt-sized particles. These tiny particles, called glacial silt or rock flour, are suspended in the glacial meltwater, creating a cloudy or “milky” appearance. The color is said to be most intense when the sunlight reflects off this rock flour in July and August, when the meltwater flow is highest. Back home, we’d call these waters murky or turbid if they were brown. Here, the effect is stunningly beautiful.

It's hard to take a bad photo of the Canadian Rockies. Here, Bow Lake shimmers a stunning turquoise hue.

Soft sedimentary rock such as limestone and shale comprises the Canadian Rockies, while hard metamorphic and igneous rock such as granite comprise the American Rockies. The Canadian’s jagged peaks are the result of glaciers carving the sharply pointed mountains, which are separated by wide, U-shaped valleys. This is in contrast to the river-carved, V-shaped valleys found further south in the American Rockies.

We spent four nights in the Canadian Rockies: three nights in Banff National Park (Canada’s first national park, founded in 1885), and one night in Jasper National Park. Each night’s campground was only an hour or two drive from the last, giving us time to stop, take photographs, hike, and enjoy the sights and sounds of the Rockies. Could we have stayed longer? Absolutely. Next time.

Banff offers just about everything you’d expect from a tourist-oriented mountain town: high-end clothing stores, coffee shops, dining spots, crowds, and more. Stop at the Visitor Center to get your bearings: you have now entered one of Canada’s top travel destinations, and many of the places you want to visit will be congested. The helpful staff will give you information on public transportation within Banff (which you will need to use), day tours, guided adventures, gondola rides, and more. You can generally find spots to park your LTV free of charge on side streets in Banff. 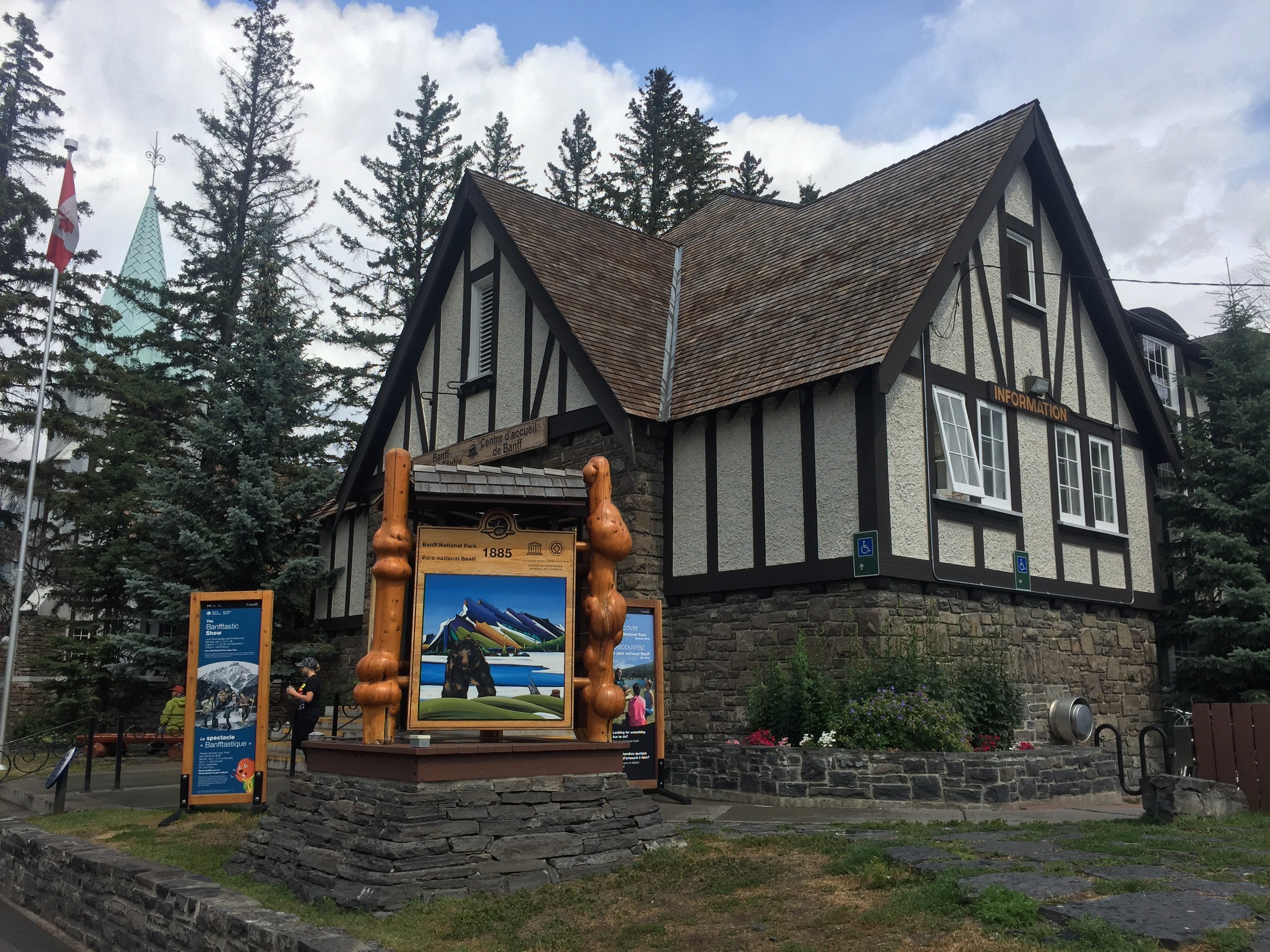 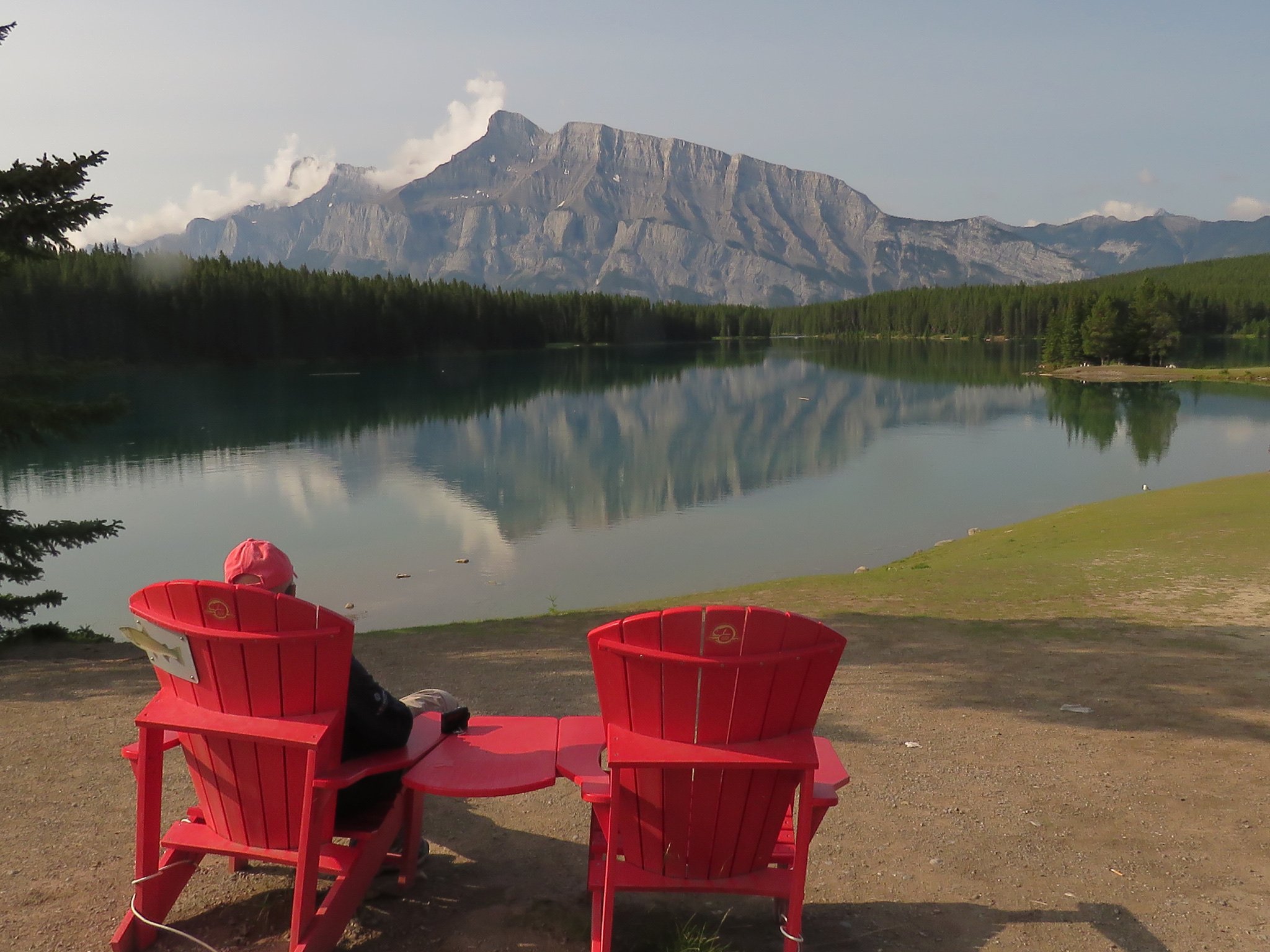 Big Red Chairs on your map will guide you to treasured places, like Two Jack Main Lake Day Use Area.

After spending the night at Two Jack Main Campground, we were ready to experience our first full day exploring Banff National Park. First, we visited Two Jack Main Lake Day Use Area for our first “Oh, my!” moment. Postcard-picture perfect, the still water of Two Jack Lake mirrored the majestic mountain in the background. We listened to the birds singing and watched as they occasionally came in for a landing, rippling the smooth canvas of the lake.

We could have spent the entire morning here, but we had much more to see. On to Lake Minnewanka, a place with several monikers. Stony-Nakoda First Nations peoples called it Minn-waki, which means “Lake of the Spirits” or “Lake of the Water Spirits,” but early Europeans called it “Devil’s Lake.” Today, the lake provides a beautiful resource for visitors, with picnic areas, trails, boat rentals, sightseeing and fishing trips, and more. Visit the Lake Minnewanka Day Use Area for boat rentals, sightseeing tours, hiking trails, and more. 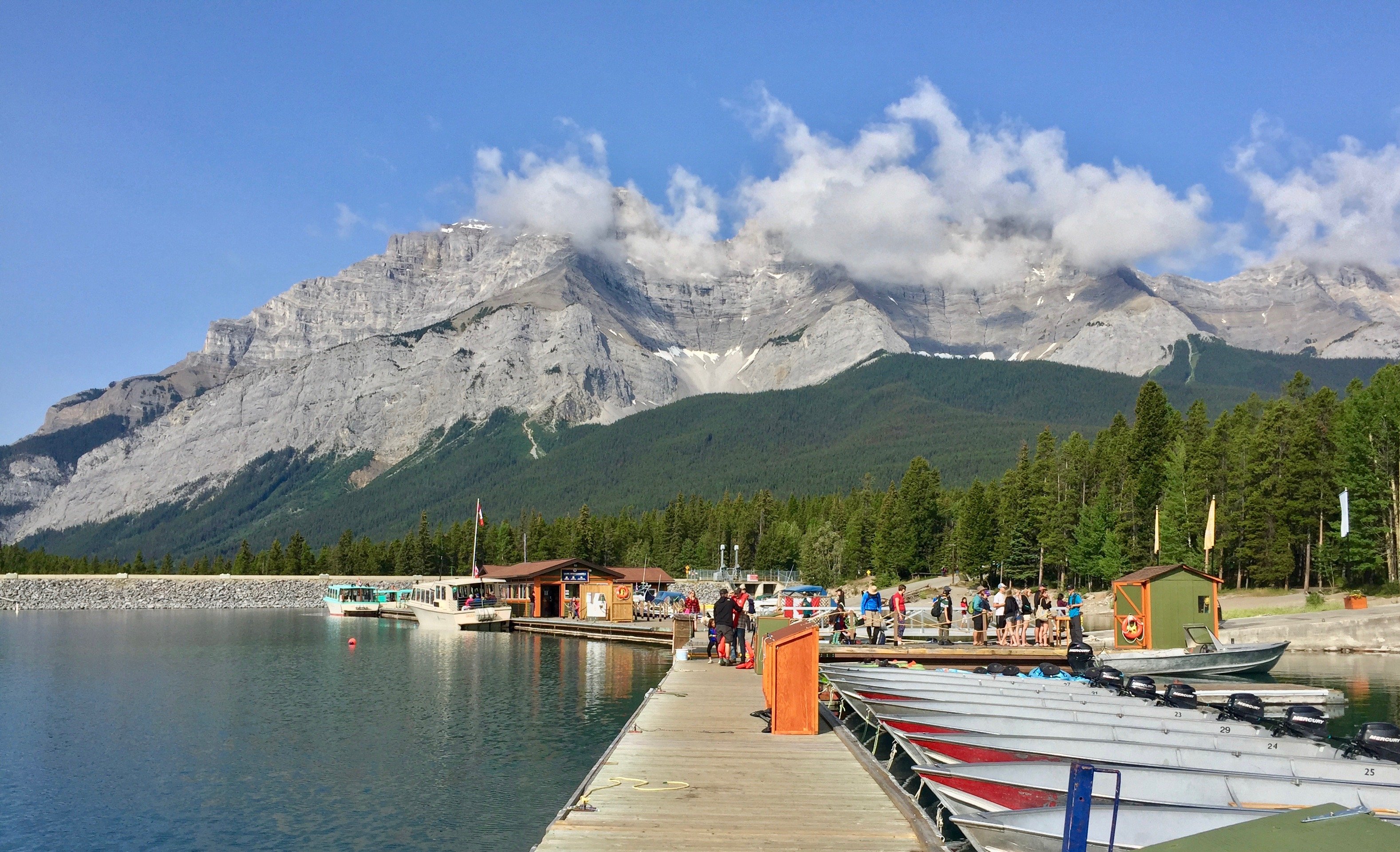 From the Minnewanka Loop we took the park road toward Johnston Canyon Campground, making several stops along the way. The staff at the campground advised us not to hike to the Upper and Lower Falls that afternoon due to crowded conditions, and instead wait till the next morning to get a head start on the crowds. They were right. We took off on an early morning hike and only had to wait five or 10 minutes in line to get to the good spots for photos at the falls. On our return, lines were much longer at these scenic falls. It’s a 20-minute (1.1 km) hike to the Lower Falls or a one-hour (2.7 km) hike to the Upper Falls. 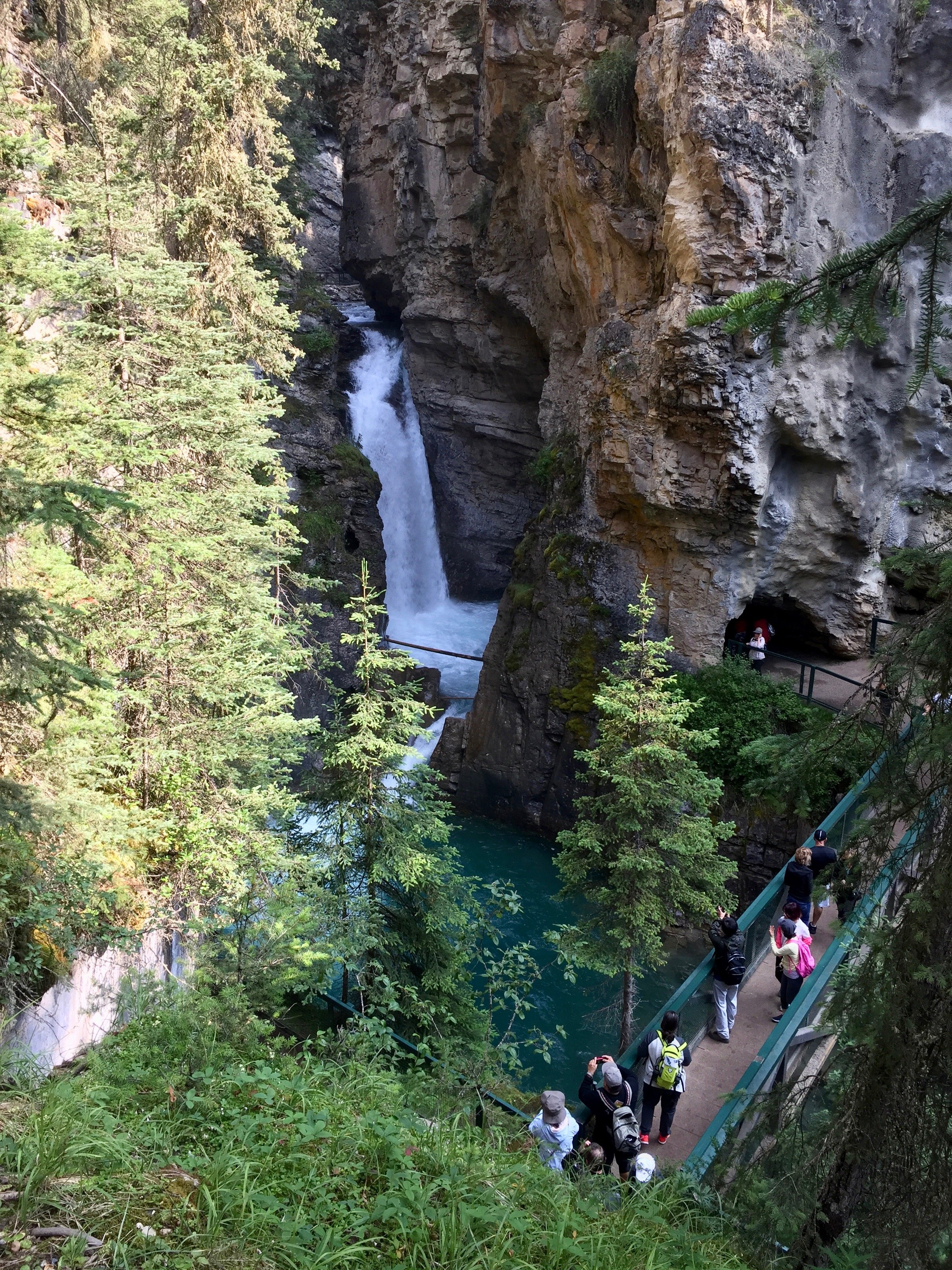 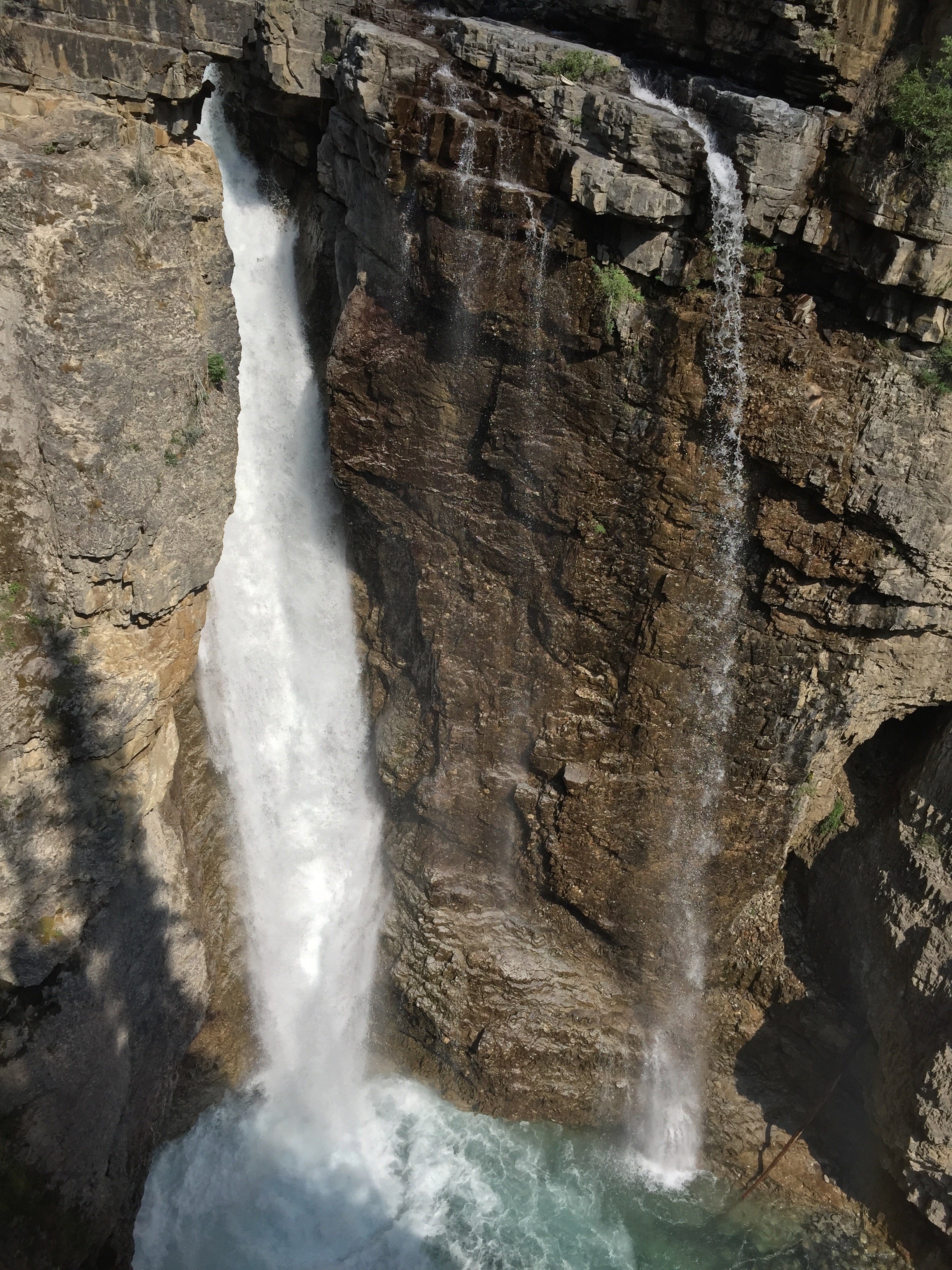 Valley of the Ten Peaks

The Lake Louise area, known as the “Valley of the Ten Peaks,” offers some of the finest hiking, skiing, and sightseeing in the world; both Lake Louise and nearby Moraine Lake are rated as two of the most popular destinations in Canada. The Lake Louise Railway Station and Restaurant, declared a Canadian heritage railway station in 1991, offers a glimpse into the past of this former outpost at the end of the Canadian Pacific Railway, founded in 1890 as Laggan Station. Today, local stores sell provisions like groceries, baked goods, and local art. The Visitor Center will help you plan your activities, as well as fill you in on how to access the shuttle service that will take you to Moraine Lake and Lake Louise, where parking lots typically fill up by 9 or 10 a.m. in summer. 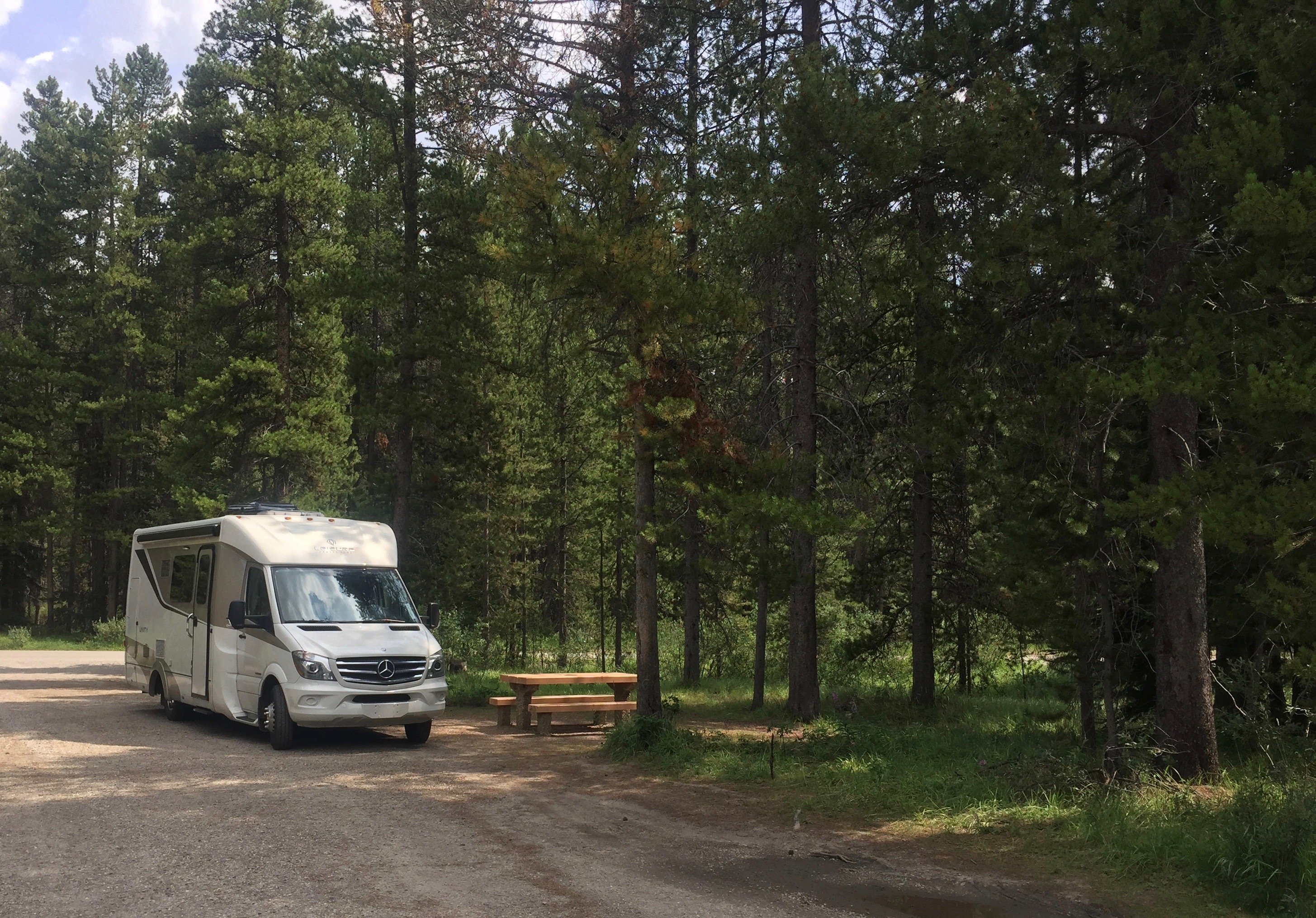 Lake Louise campground, where we saw two grizzly bear cubs out our window. Mama was close behind.

The Lake Louise campground is separated into two sections for hosting both hard-sided RVs and soft-sided trailers and tents. An electric fence protects campers staying at the soft-sided campground from grizzlies. Pulling into the campground, park staff and fliers warned us about a mother grizzly with two cubs seen recently in the campground. A few hours later we saw the two cubs scamper past our kitchen window. We knew mom was nearby, but that didn’t stop a few neighboring souls from courting danger by trying to get photos. Ranger vehicles patrolled our area the rest of the evening and red tape warning residents to go no further was hung on the trails. Lucky Us provided a comfy and safe haven that evening.

Glacially-fed Moraine Lake, nestled in the Valley of the Ten Peaks, presented a beautiful pop of color as we walked the Moraine Lake Lakeshore Trail. The shuttle service provided convenient transportation. 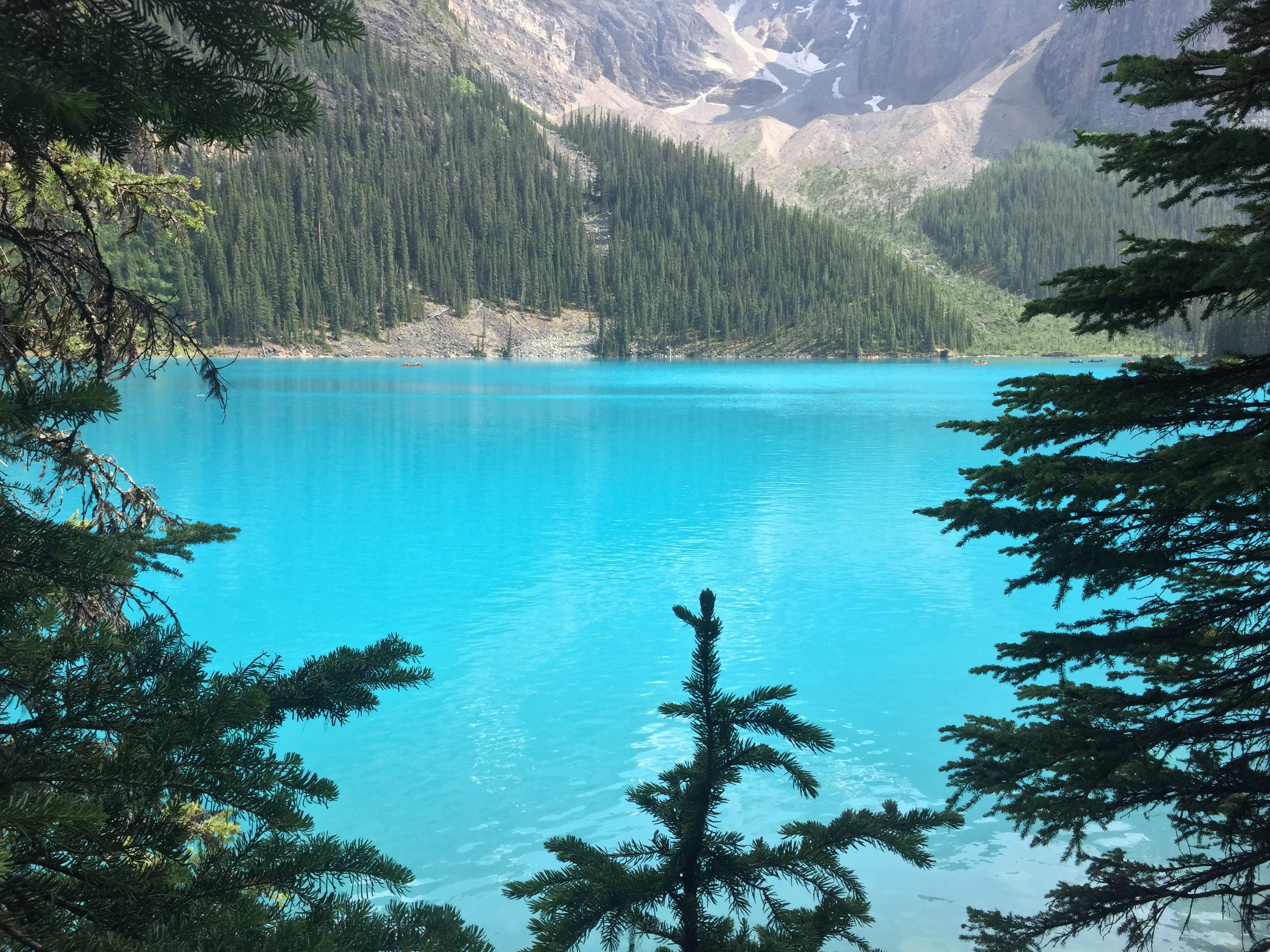 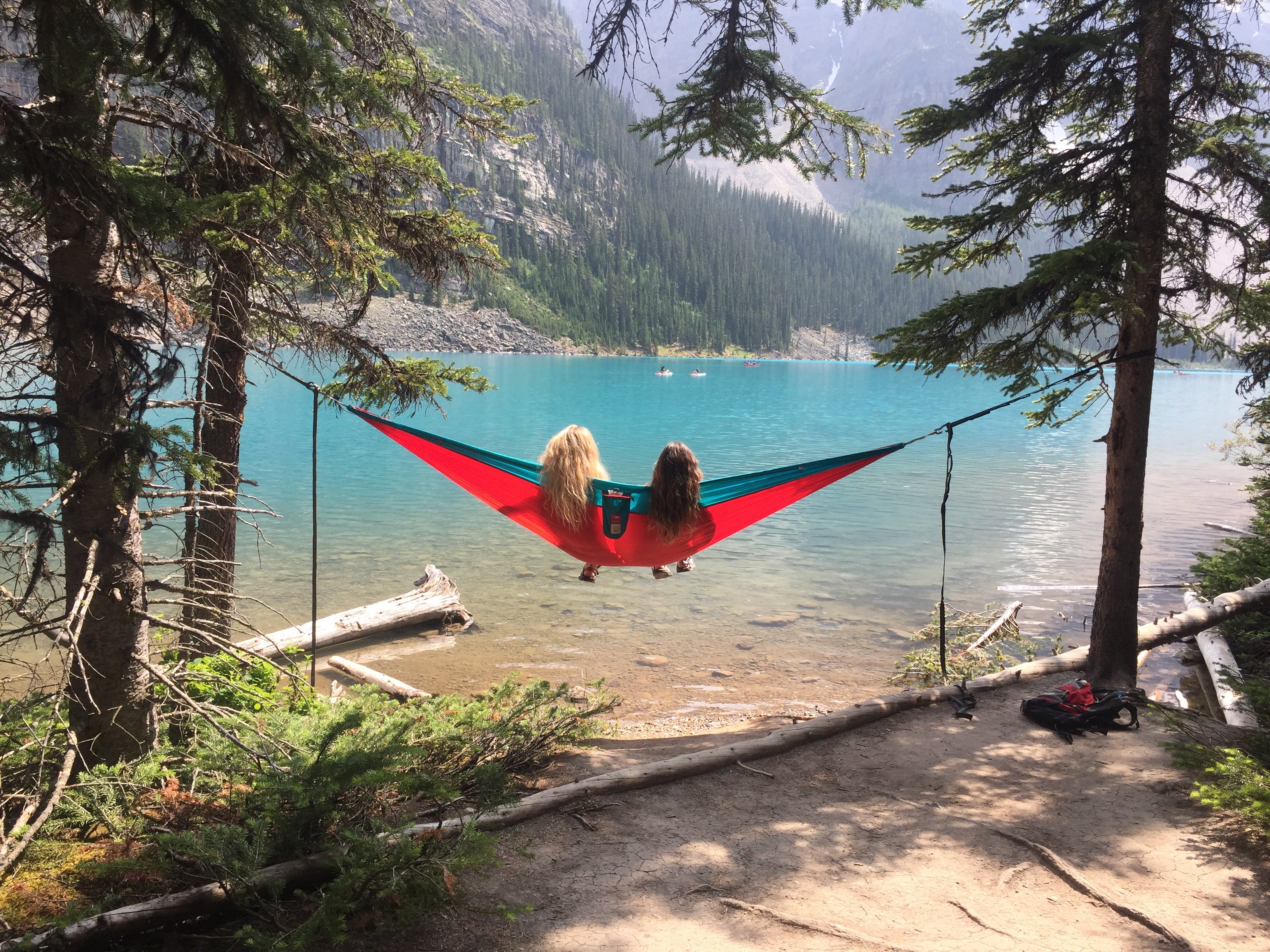 Lake Louise brought yet another jaw-dropping backdrop to another shoreline trail hike, which led us to the milky creek that gives the lake that enchanting turquoise color. We watched climbers scale the rockface and horseback riders meander down the trail. Longer hikes lead to Lake Agnes and Plain of Six Glaciers tea houses. After our hike, we lunched on the patio at Fairmont Chateau Lake Louise. Yes, this was a moment to savor. 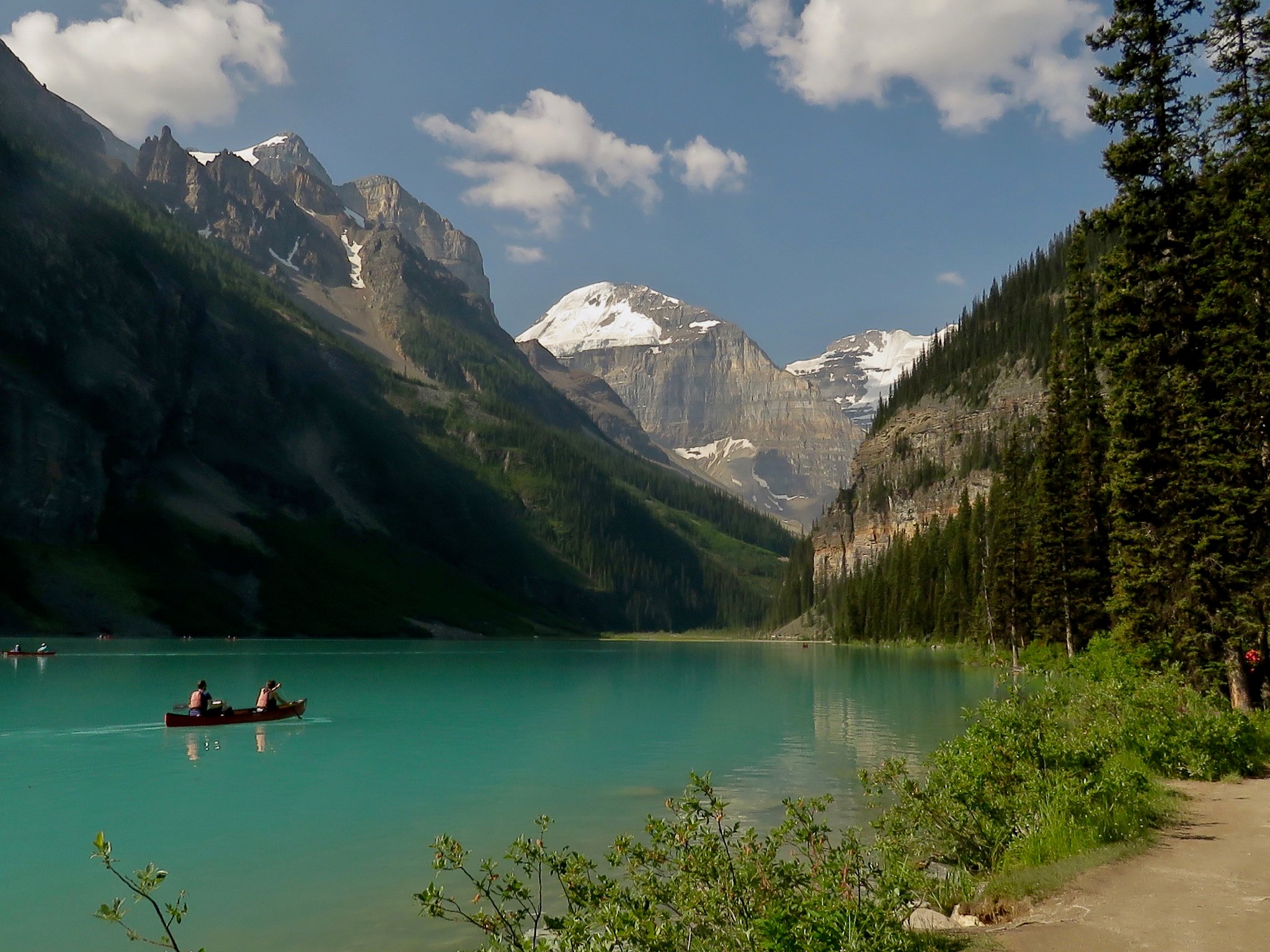 We hiked the lakeshore trail at Lake Louise; canoes and kayaks can be rented as well. 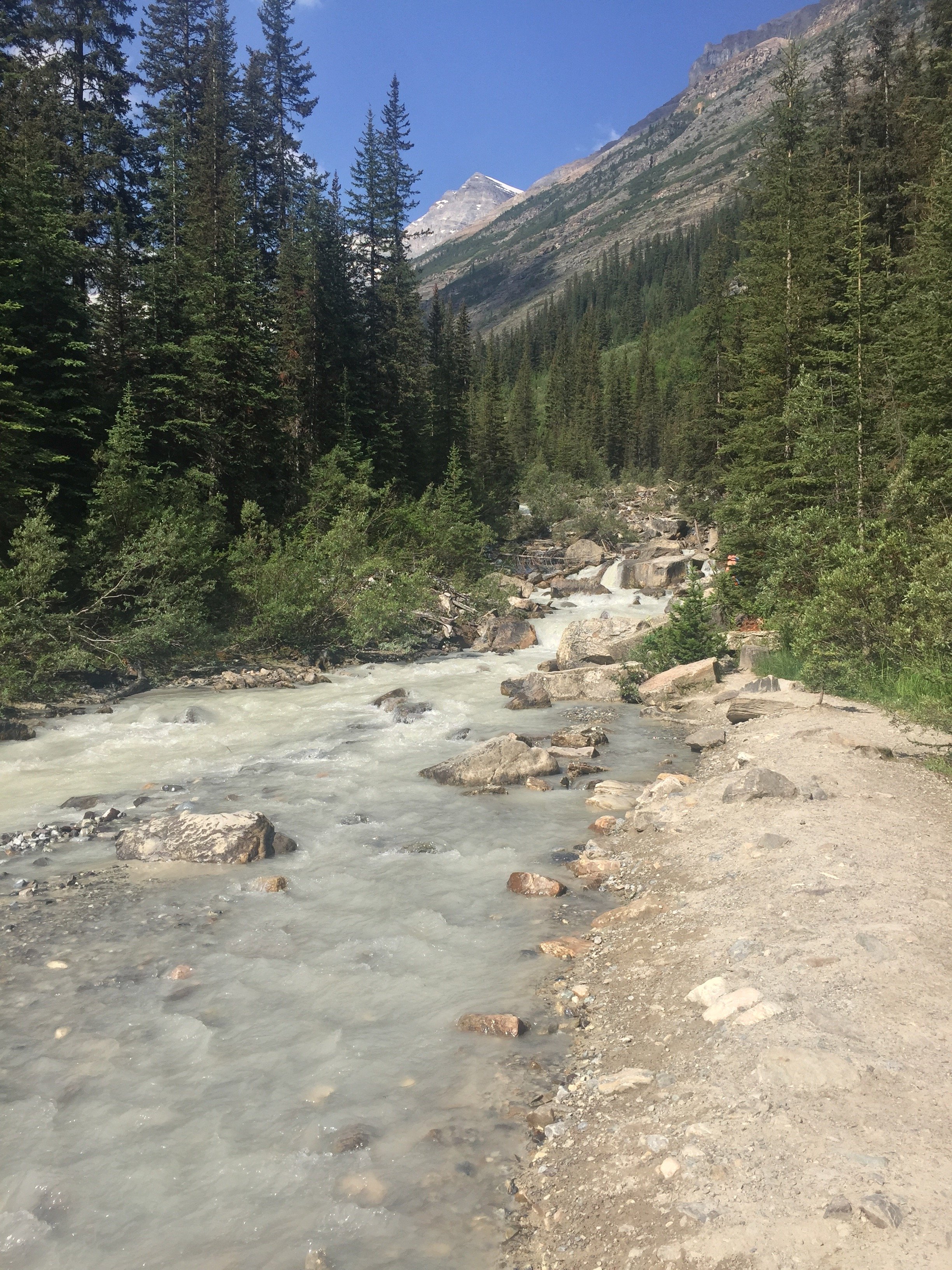 Walking toward the end of the trail. 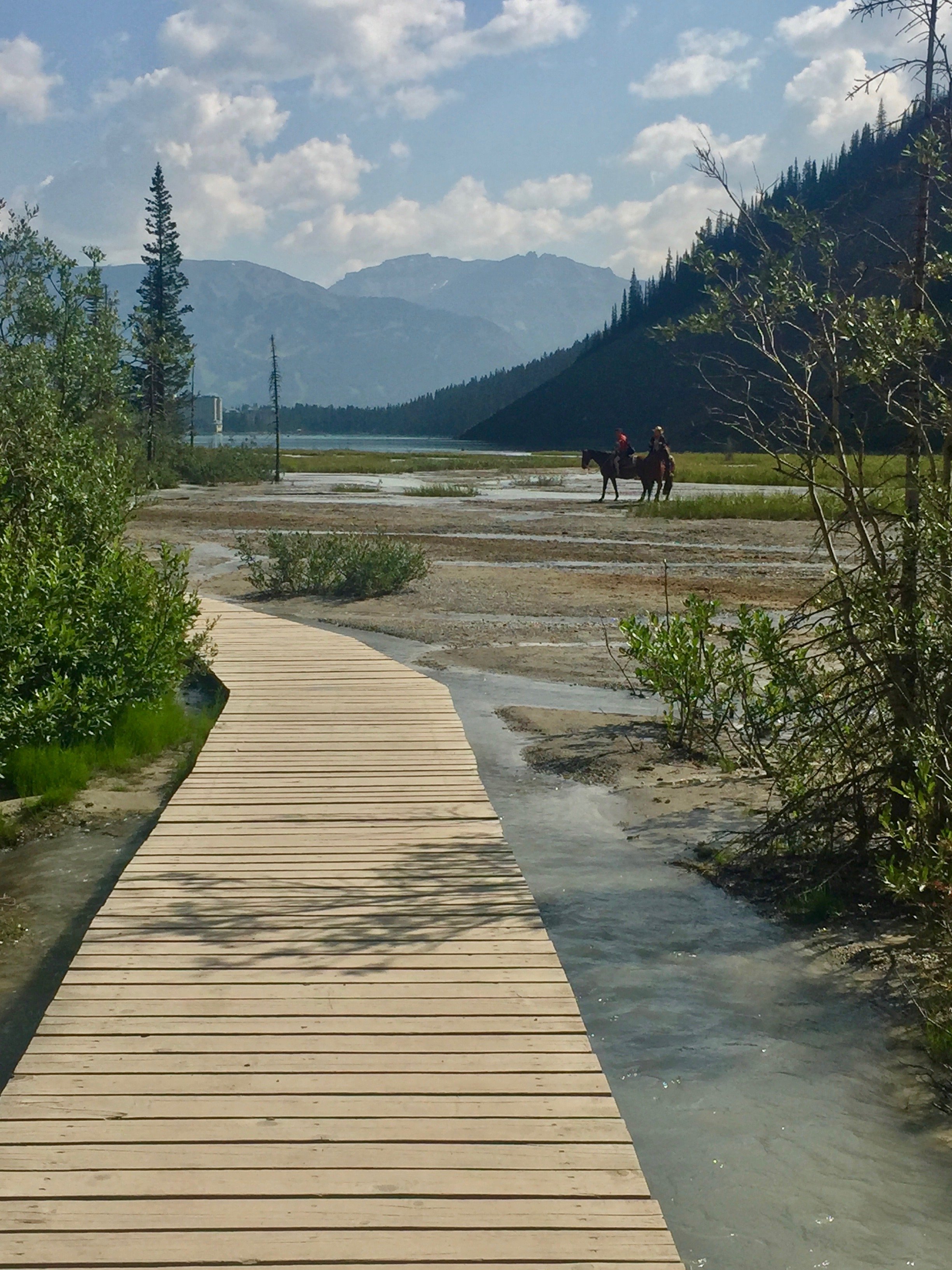 On the boardwalk heading back. 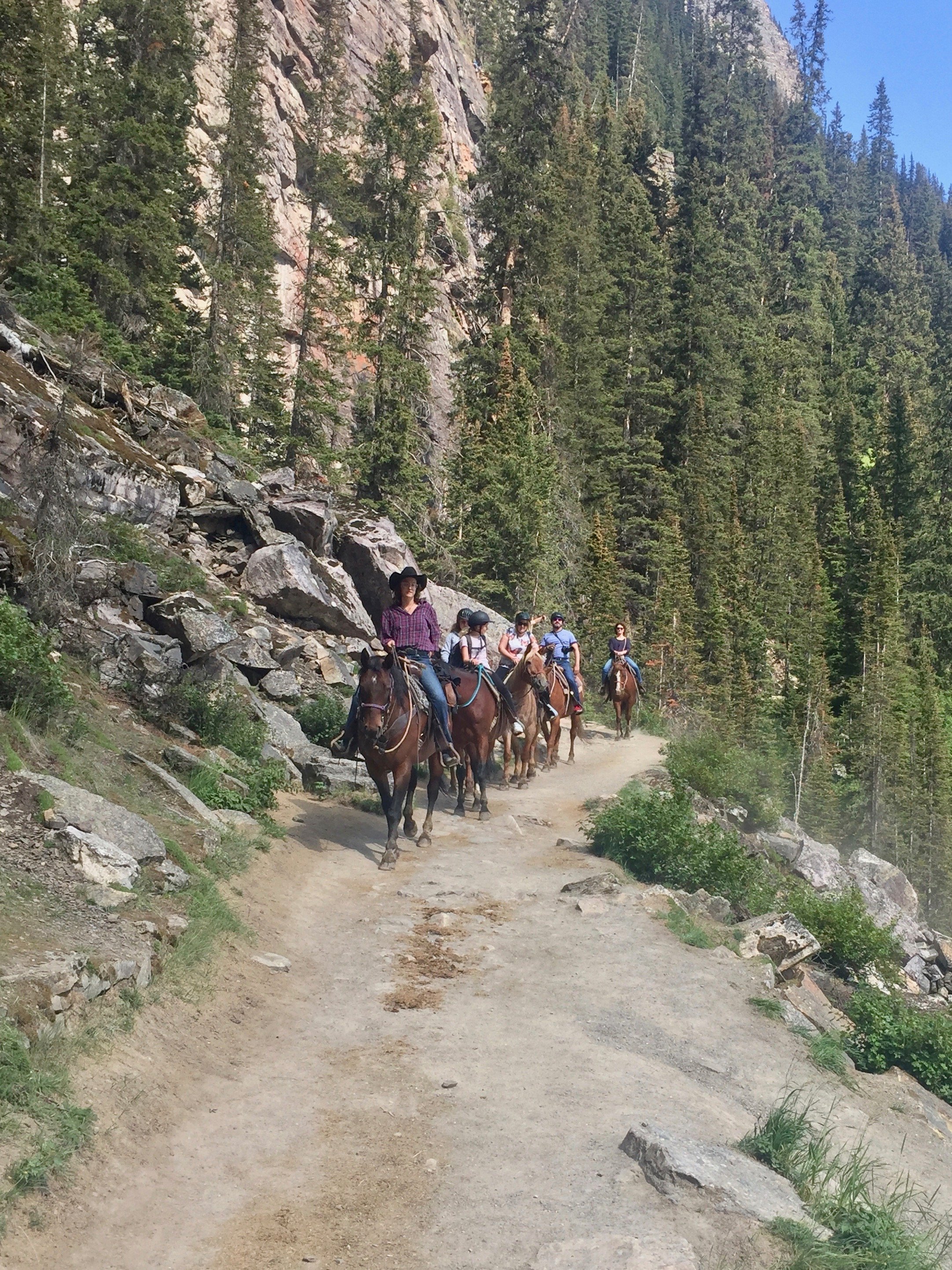 We shared the trail with horses.

Icefields Parkway (Highway 98 North) links the hamlet of Lake Louise in Banff National Park and the town of Jasper in Jasper National Park. Known as one of the most scenic highways in the world, this route led us through a painter’s canvas of dramatic peaks, pallid glaciers, and more of that over-the-top turquoise water. We made frequent stops, and hiked the popular trail to Lake Peyto. 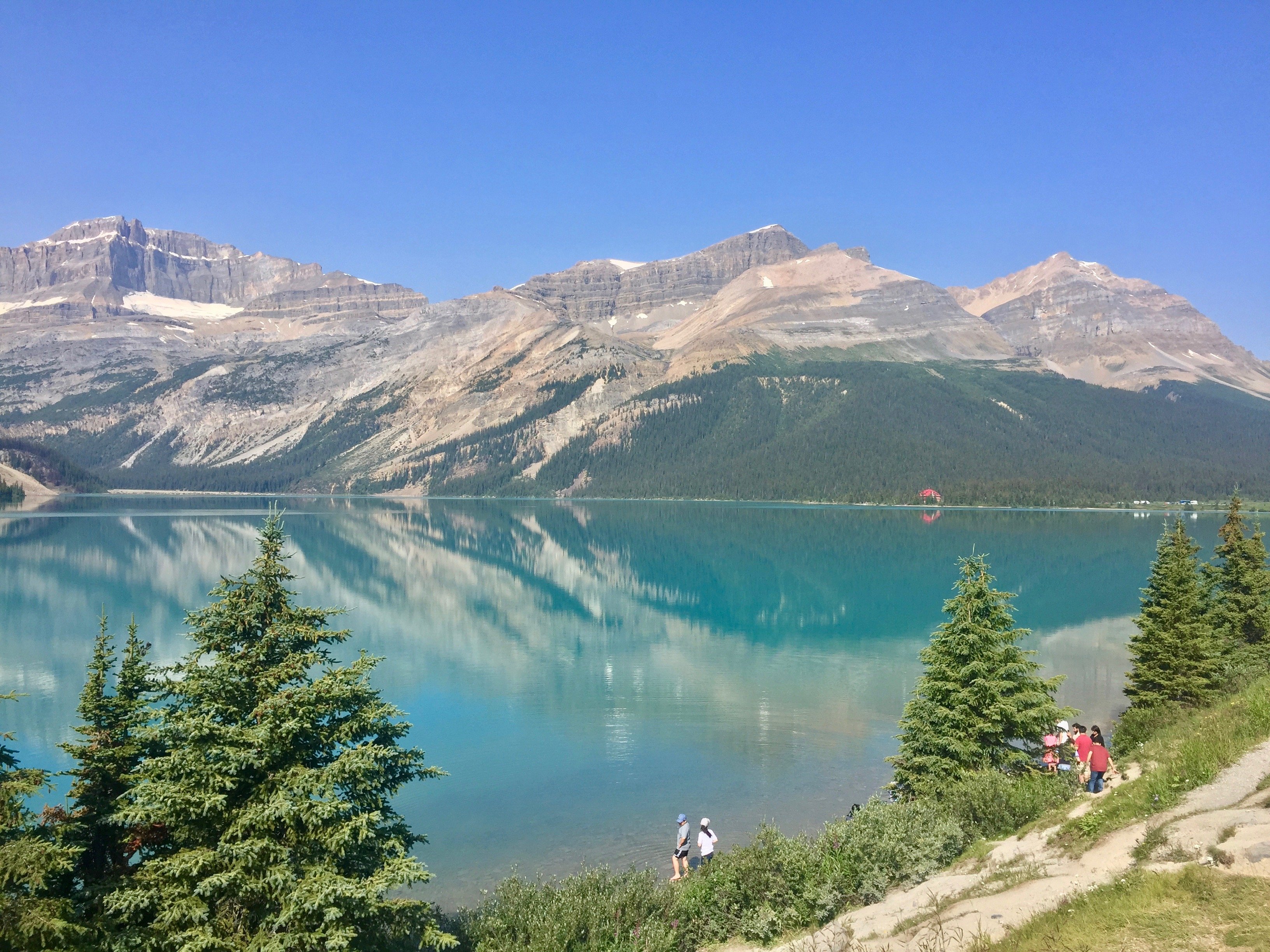 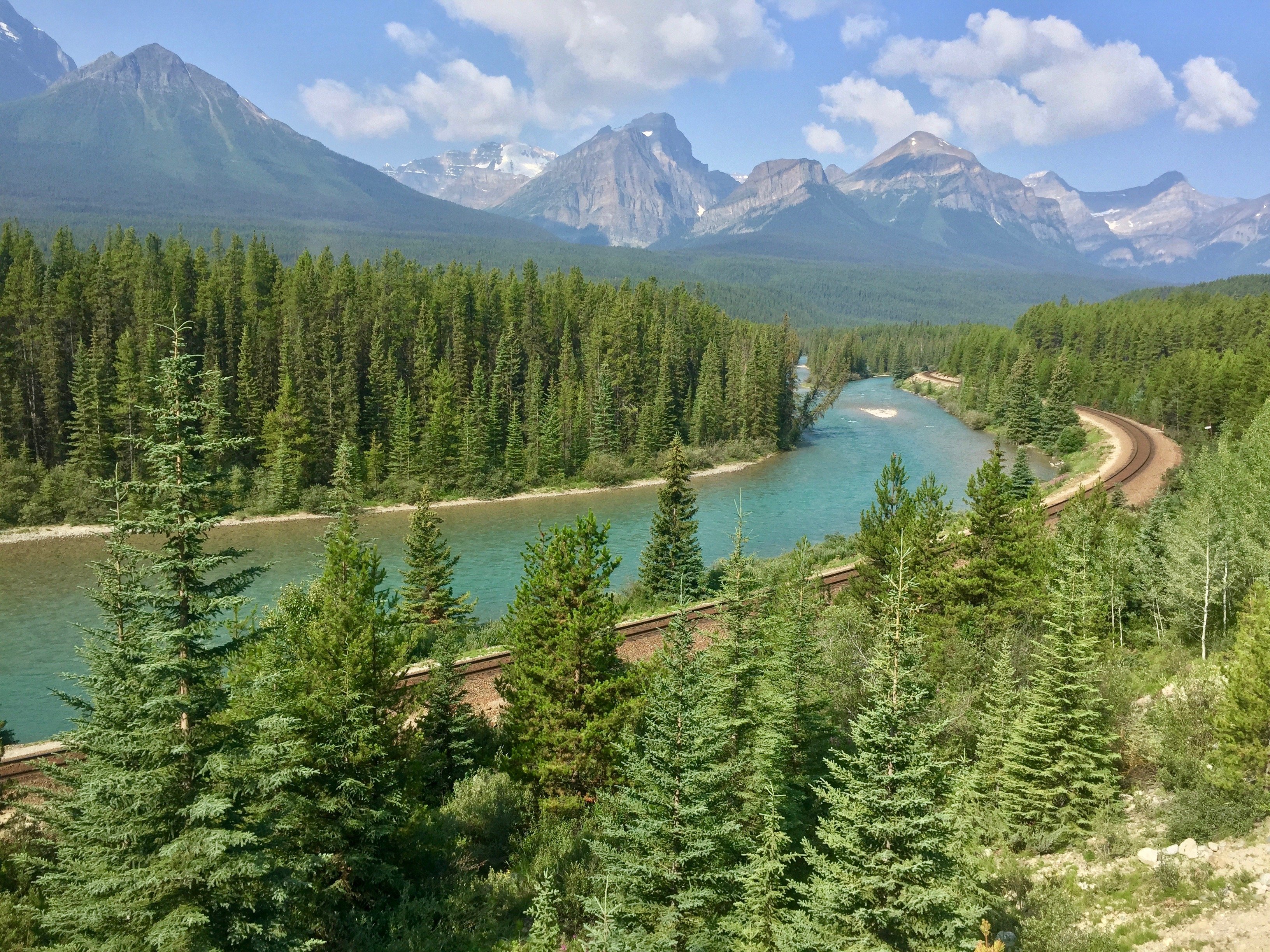 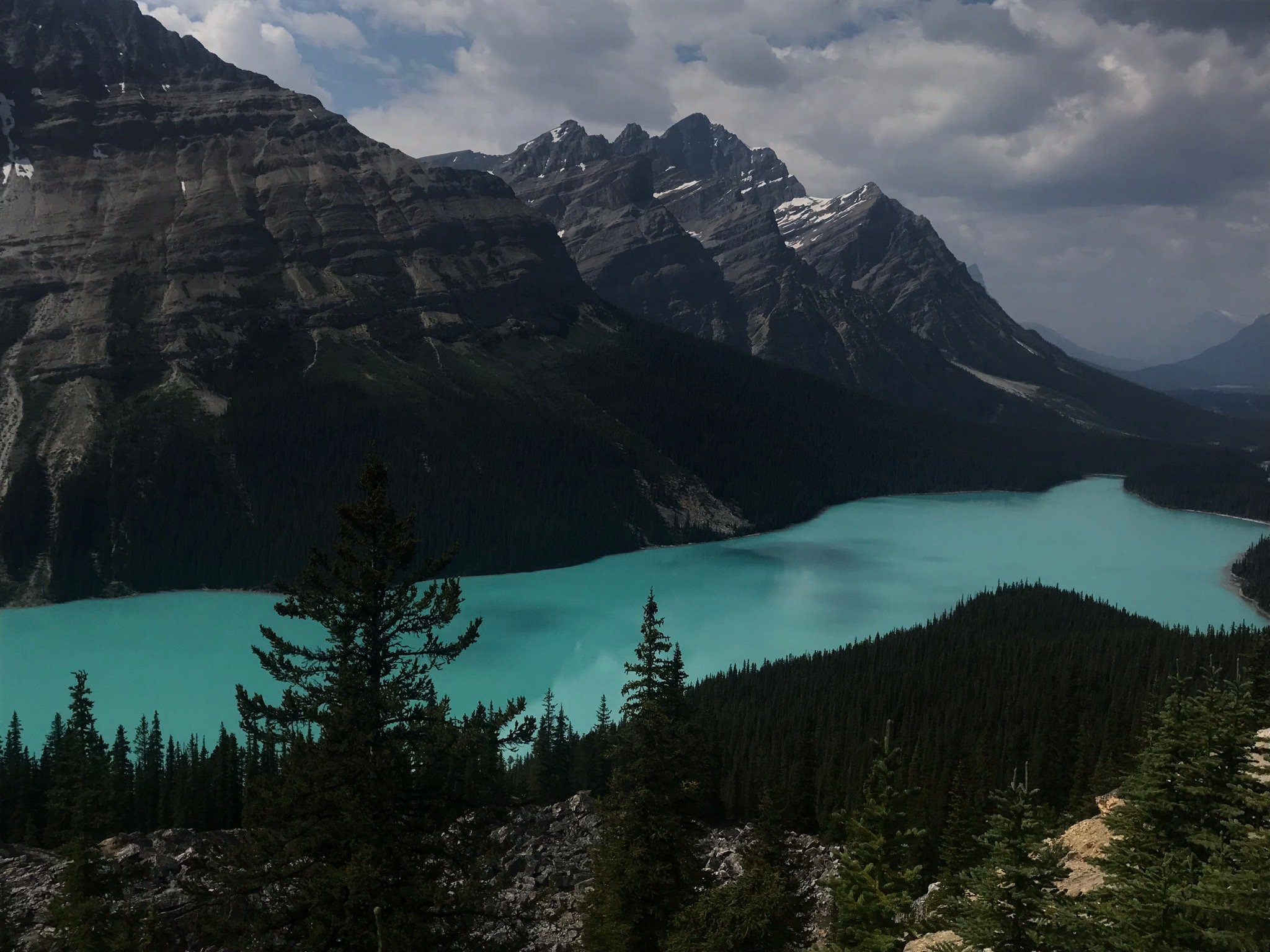 After driving Icefields Parkway and experiencing more glaciers, snow-capped mountains, and turquoise lakes, we headed into Wabasso Campground. We took a short walk behind our campsite to view the Athabasca River’s milky turquoise hue, reminding us once again of the impact of the glaciers. It was time to bid farewell to the Canadian Rockies. 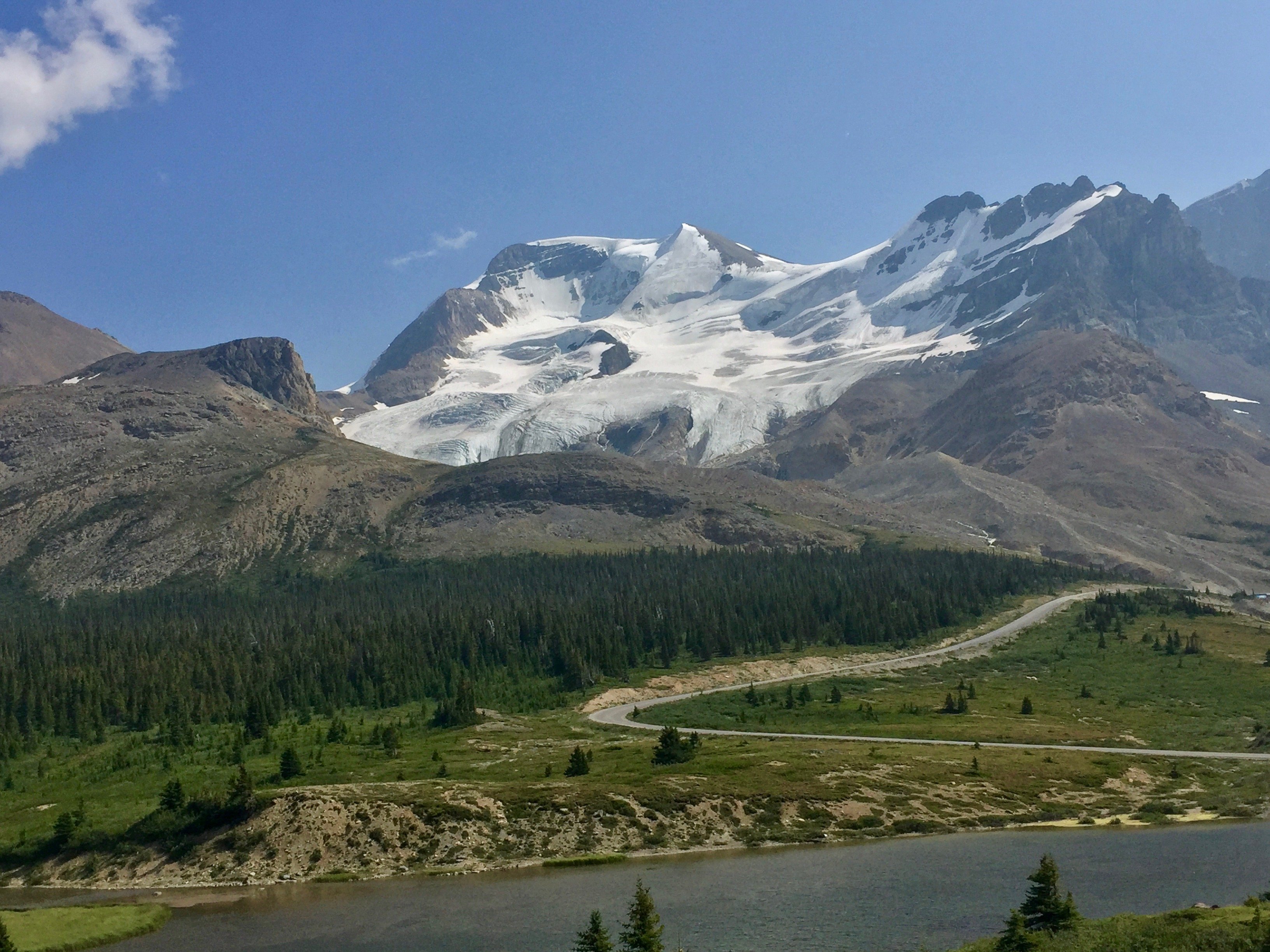 A glacier-topped peak shows its beauty to us from the Columbia Icefields Center. 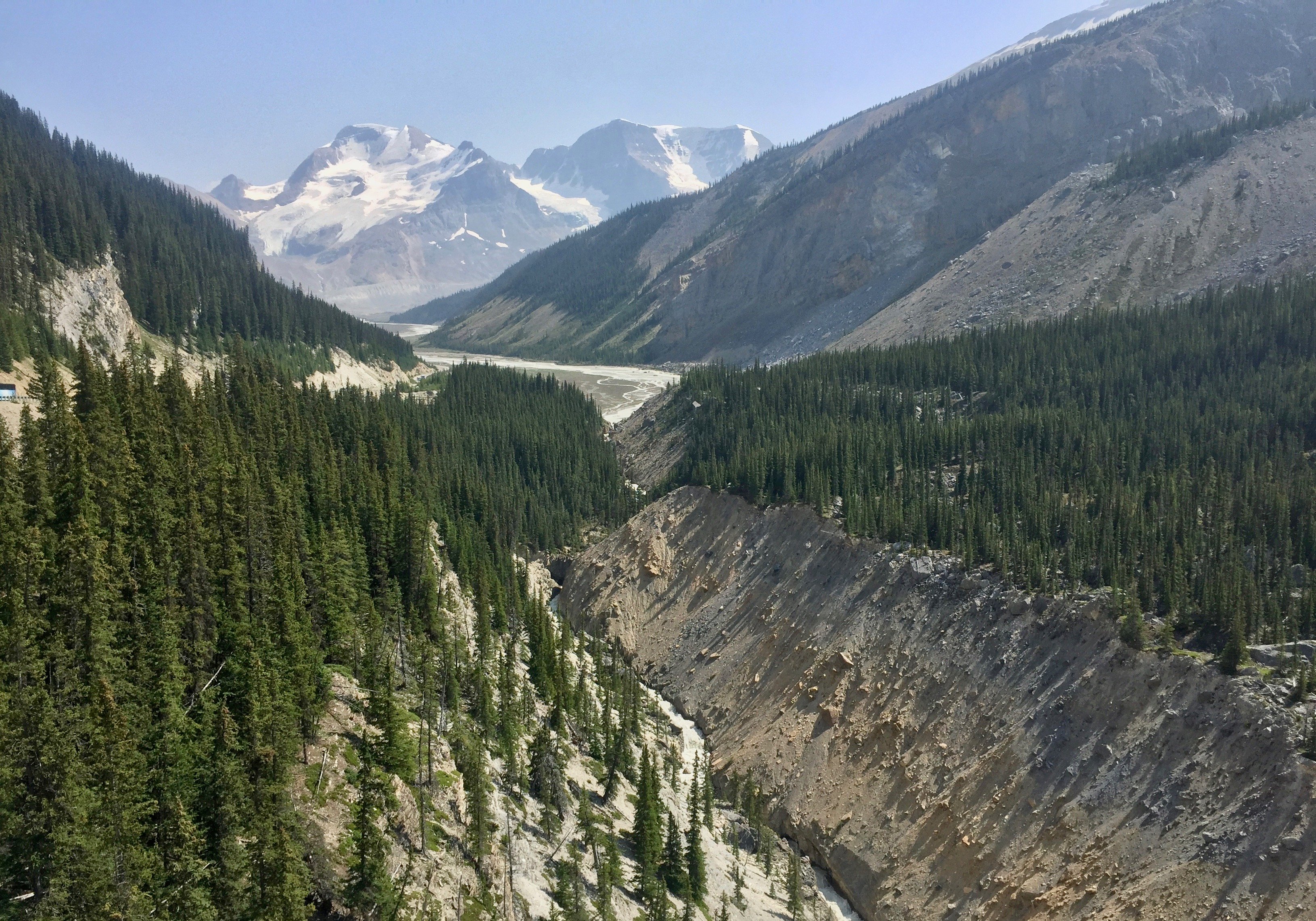 View from the Glacier Skywalk.

Go to Parks Canada for reservations, rules, construction updates, and more. Make your reservations as soon as possible.