A Dream-Like Journey Through The Needles 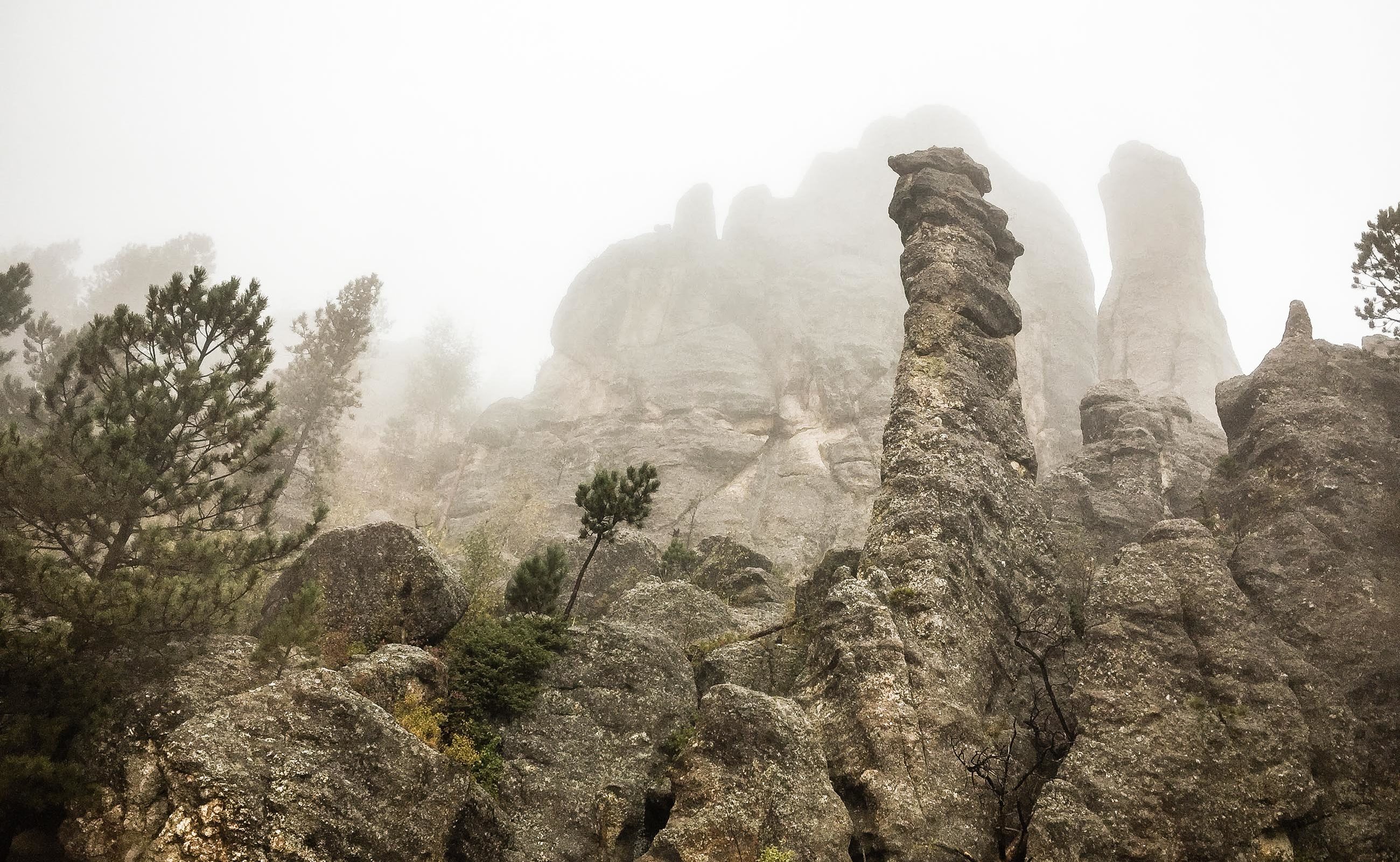 This is a story about a “highway” that is more like a paved horse trail. The road meanders between and through spectacular granite formations. Spruce and pine forests surround it. Colorful aspen and birch trees, in season, peek through the evergreen forest. This is about a 14-mile drive that will remain indelibly lodged in our travel memories.

But this is getting to a cherry sundae before a sumptuous meal. As an entree, we should start our journey at Custer State Park in the iconic Black Hills of South Dakota. The Park, situated at the southwest corner of the state, is a 71,000-acre home to abundant wildlife such as buffalo, elk, white-tailed deer, not-so-wild donkeys (more on this later), prairie dogs, and more. It is not uncommon, as we experienced, to be stuck in a traffic jam caused by a herd of buffalo crossing the road. 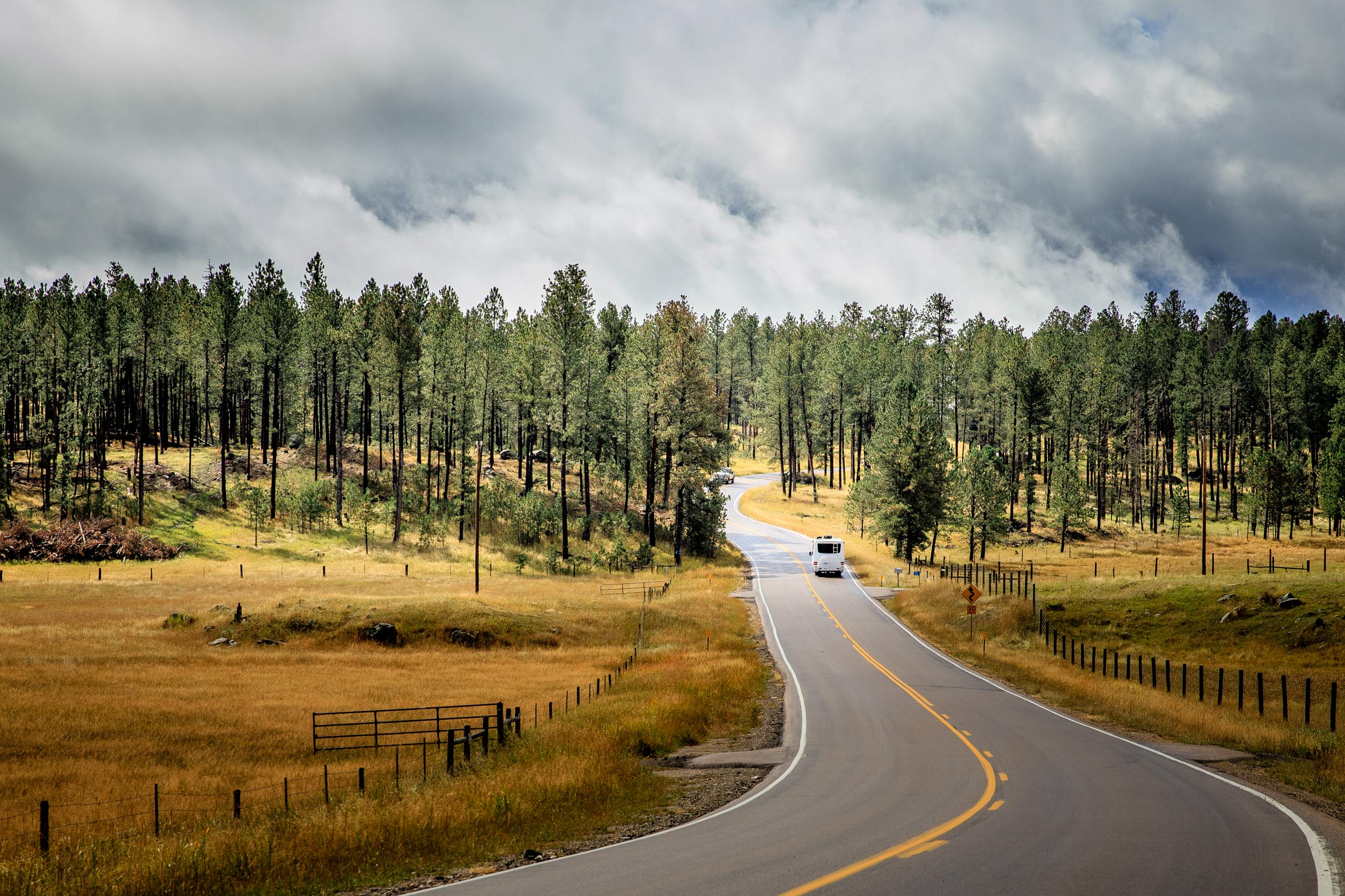 We took the scenic Wildlife Loop Road, an 18-mile loop through open grasslands. Along the way, we spotted at least three herds of bison, and two of these sightings were of the close-encounters type.

Just as Joanne was hitting the brakes, I took my camera out, hoping to capture the event and get a great shot before the bison moved on. Turns out I could have taken a thousand images before they finally gave us a breach large enough for our motorhome to safely proceed. By the third encounter further in the loop, we were seasoned veterans, the excitement of the first crossing having already dissipated. It remains, however, a spectacular sight. 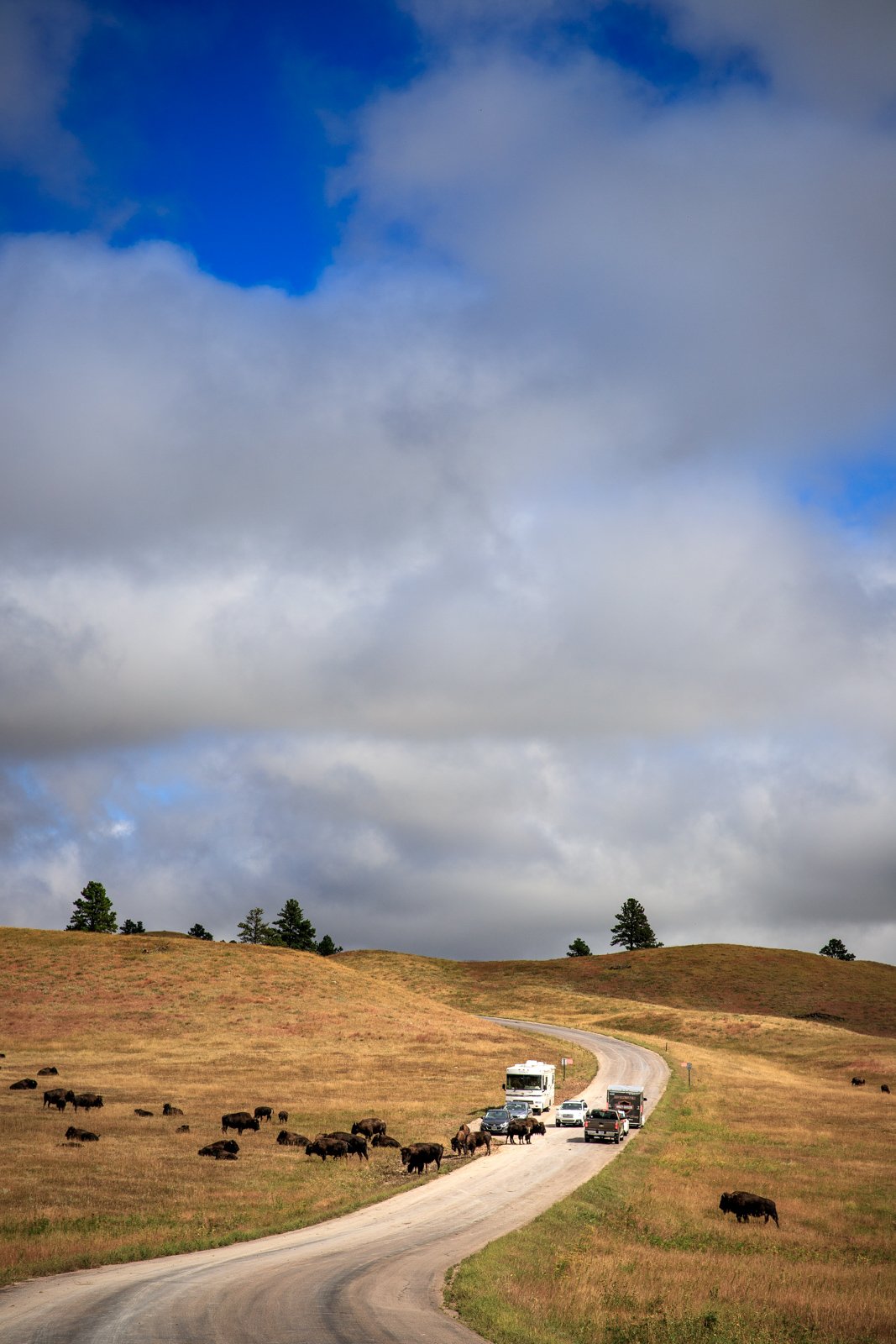 Once passed the visitor center, a recently renovated stone and wood beam structure worth the visit, we came to a stop at a place where wild donkeys roam freely. Sadly, these donkeys are more domesticated than your real wild variety, as guided tourist vans include this stop on their daily routes and feed the animals. We are not certain this is the best way to care for these so-called “wild” animals, as they seem totally dependent on humans for their food. 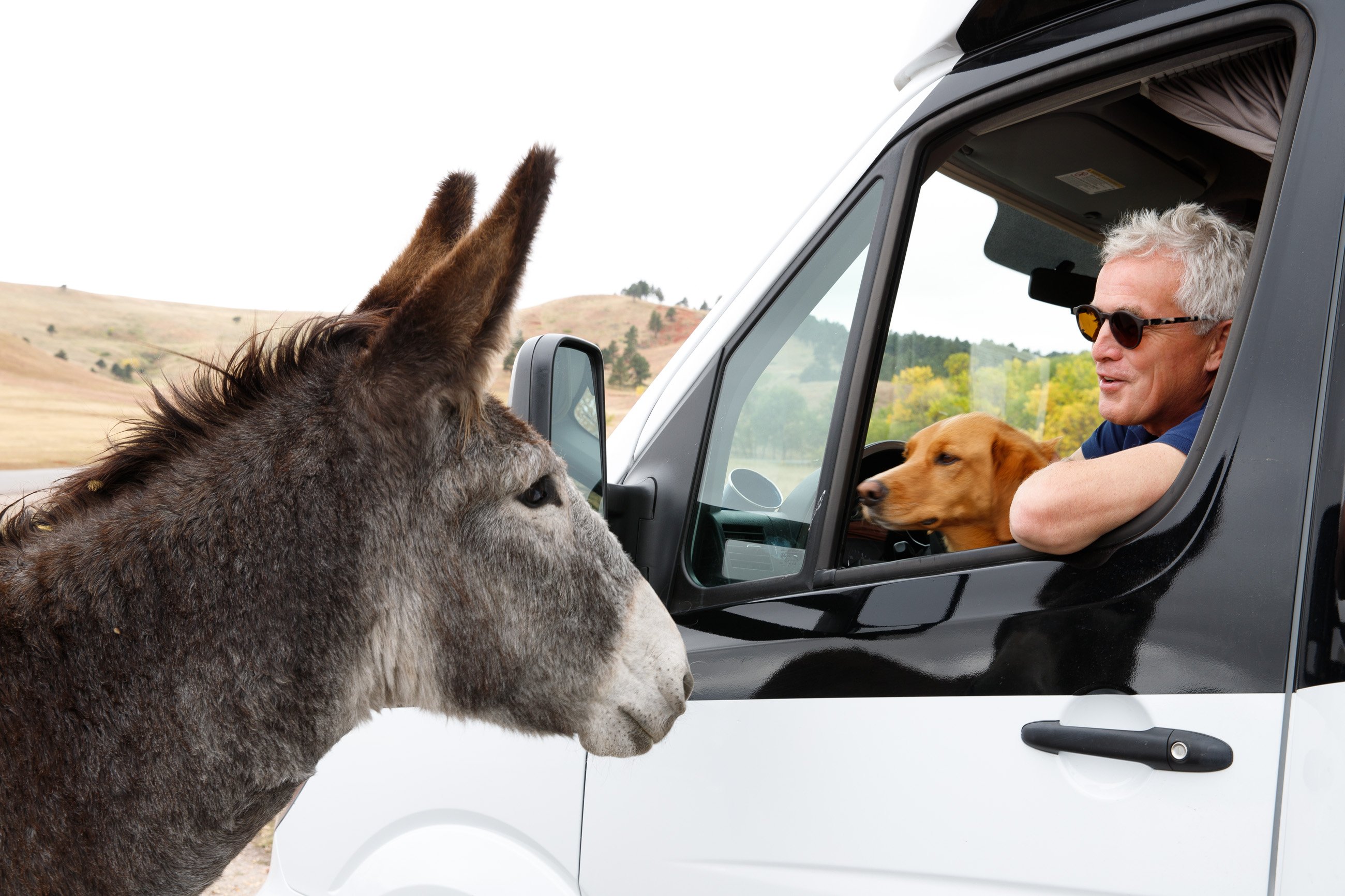 Got anything to eat?

The loop road took us to Highway 87, where we turned north to start the journey on Needles Highway. This road, planned by former South Dakota Governor Peter Norbeck nearly 100 years ago, was completed in 1922. Not quite knowing what to expect, we started our journey from the south, heading northwest towards Sylvan Lake. There are warnings about the size of vehicles that can safely make it through the few tunnels along the road. Do not underestimate these warnings. as those tunnels are very narrow and of low clearance. 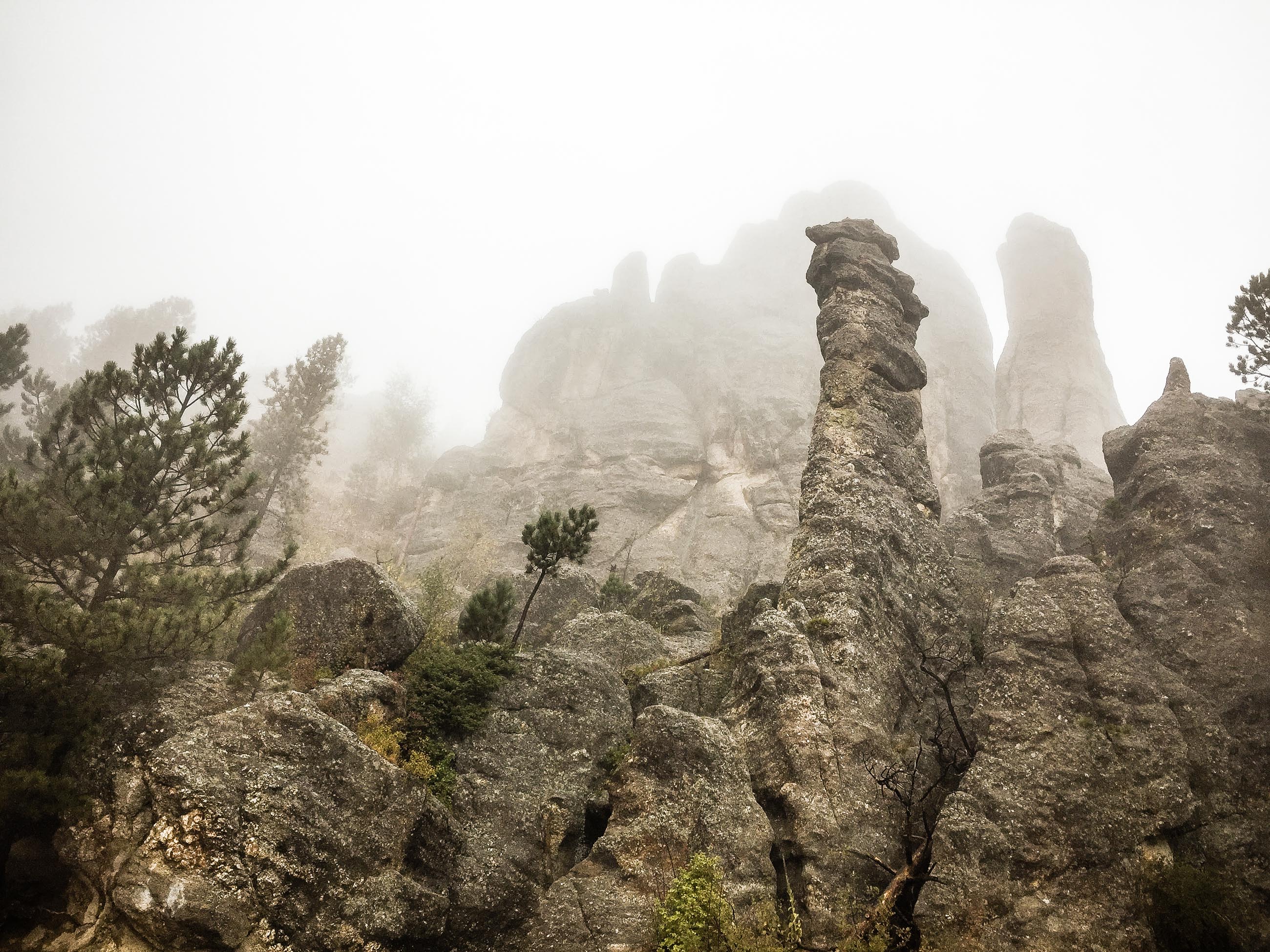 Granite “needles” peering through the fog and mist.

This side trip was almost a non-starter, because rain and fog had rolled in early that morning. But explorers we are, so we ignored the weather and threw caution to the wind and moved on bravely. Our traveling companions preceded us, slicing through the mist and fog to the point where we could barely see the distinctive Unity taillights ahead. 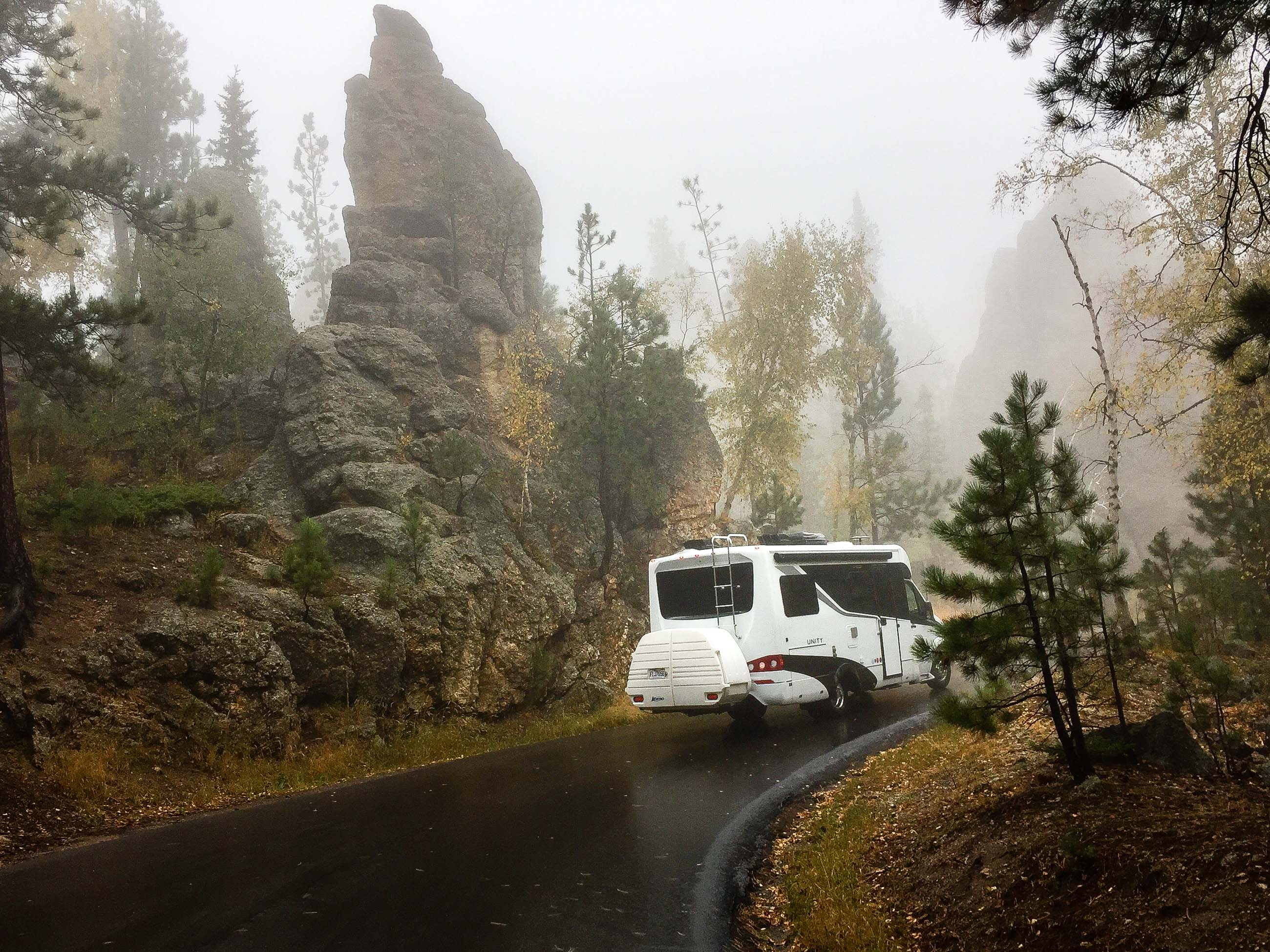 What strikes you at first as you proceed along the road is the feeling that you are in someone’s driveway. The narrow pavement is well maintained and there are no dividing lines. There is no shoulder to speak of on either side of the road, so meeting another large vehicle demands careful execution on both parts, notwithstanding the poor driving conditions we encountered. Eventually, we arrived at our first major challenge of the day. 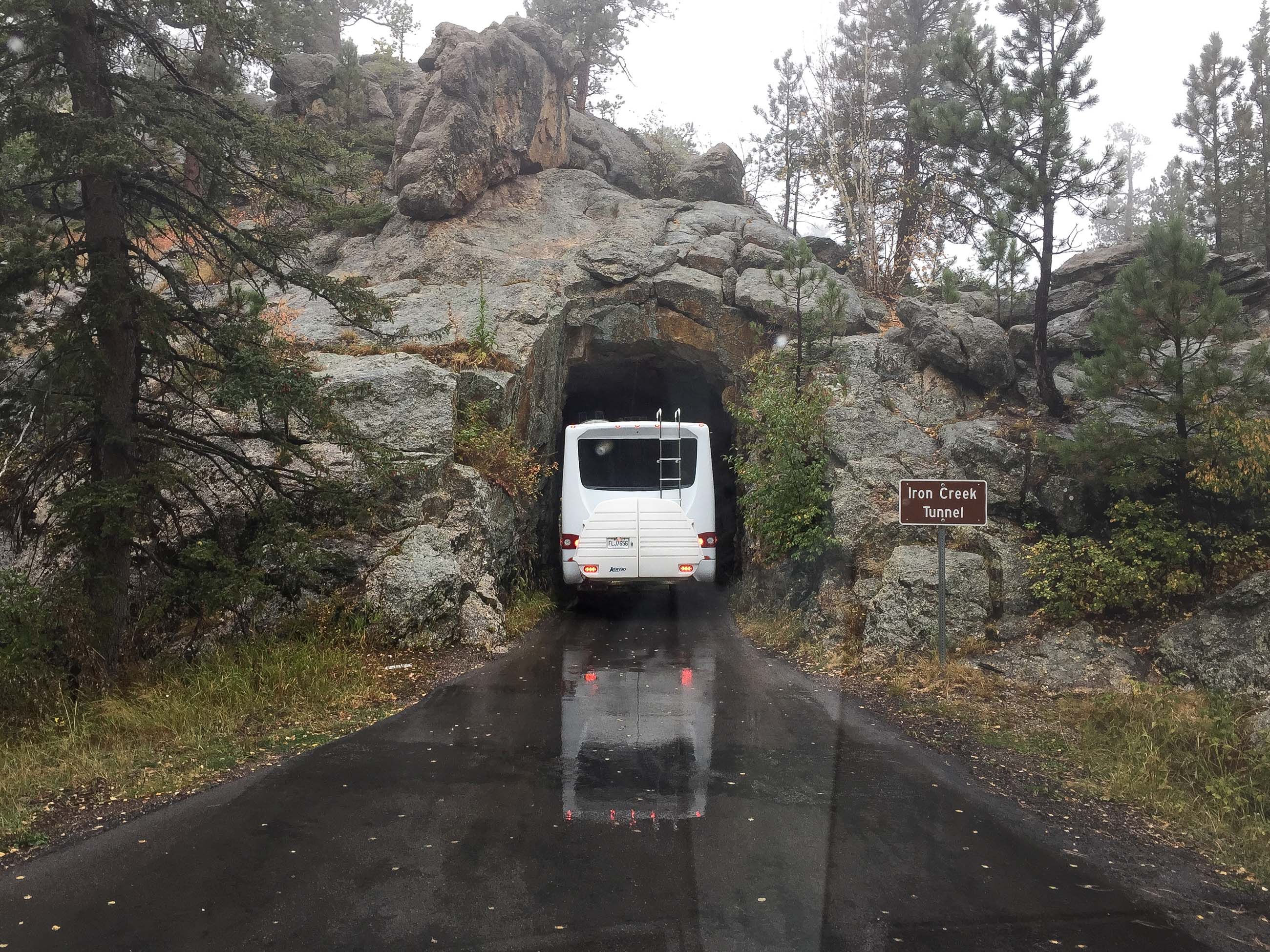 A tight fit, but easier than the next tunnel up the road.

We stopped the vehicles and marveled at the workmanship involved in blasting a hole in such a massive granite wall. Either Governor Norbeck had foreseen that our Unity would fit nicely into the opening 100 years earlier, or LTV designers got it just right. Either way, we were thankful to be able to safely proceed through the tunnel and resume our journey towards what would become one of the most challenging driving feats we had ever encountered: Needles Eye Tunnel. 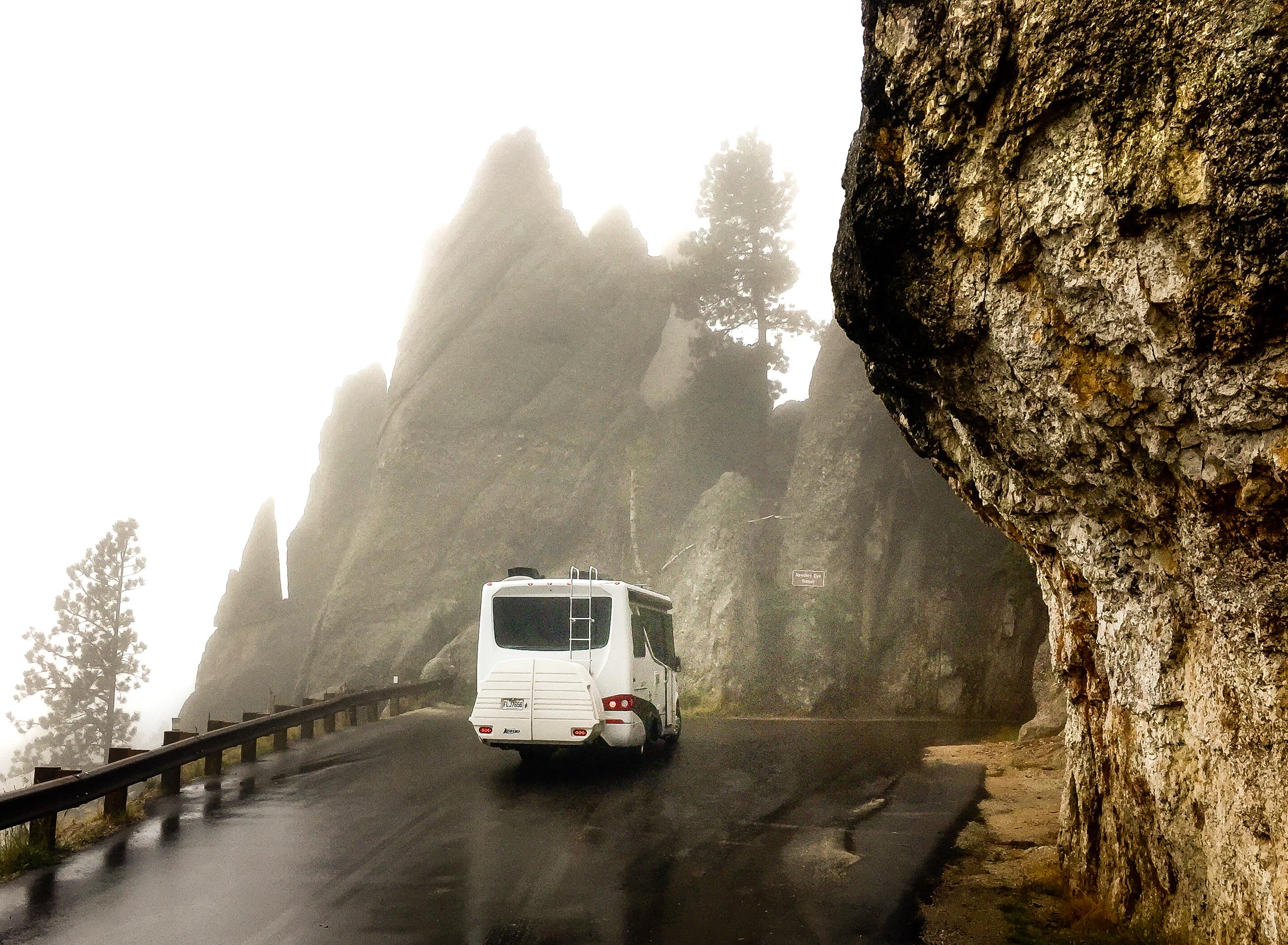 Needles Highway was named after the granite structures that stand like needles. Although not of the same geological composition, they reminded us of the rock structures at Chiricahua National Monument. The needles took on eerie ghost-like silhouettes as we continued the climb along a winding track, craning our heads to peek at them through the fog and rain, slowing down to a crawl as the Sprinter’s gears downshifted and our RV bravely powered its way uphill, en route to the next highlight of our trip.

“This is barely larger and taller than our motorhome,” I said hesitantly.

“Who measured this tunnel?” someone asked.

“I don’t know,” I replied, “but one thing I am certain of is that our side mirrors will need to be folded in.”

Our traveling companions, who (gamely) chose to go first, tucked in both side mirrors, turned on their headlights, and valiantly inched themselves into the tunnel. Sparks did not fly! We were impressed, albeit wavering a little bit as our turn was up.

Thanks to our friend Joanne Chenail-Trépanier for this video of the crossing.

We both managed to conquer Needles Eye Tunnel unscathed. It was only after congratulatory high fives that one of us looked up and said, “Hey – there’s the Needle’s Eye!” 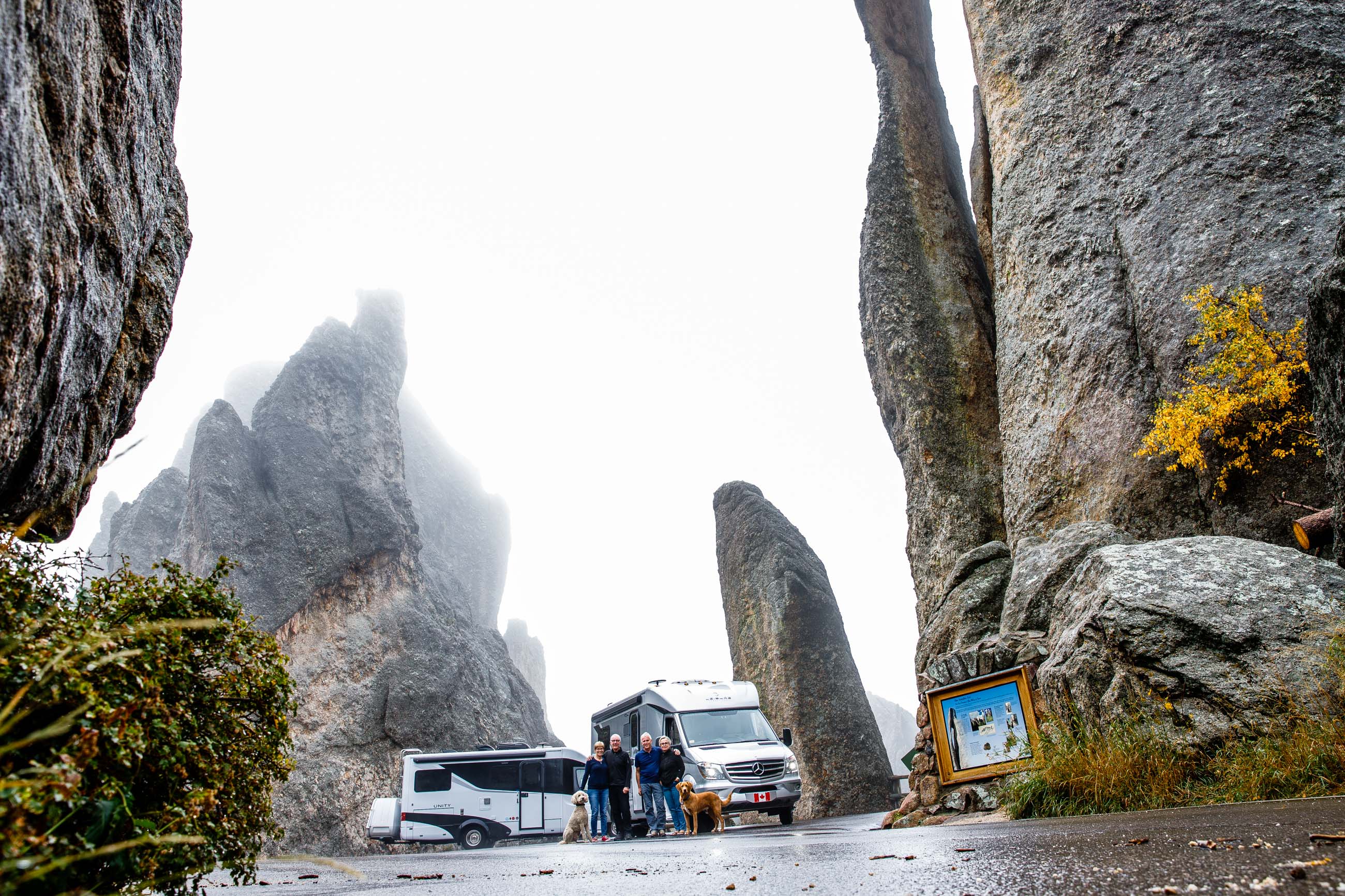 We wondered how many people cross the tunnel and continue on without seeing the whole reason why they are there in the first place.

The road at this point descends towards Sylvan Lake, where we would eventually take Highways 89 and 385 for a visit to the Crazy Horse Memorial. 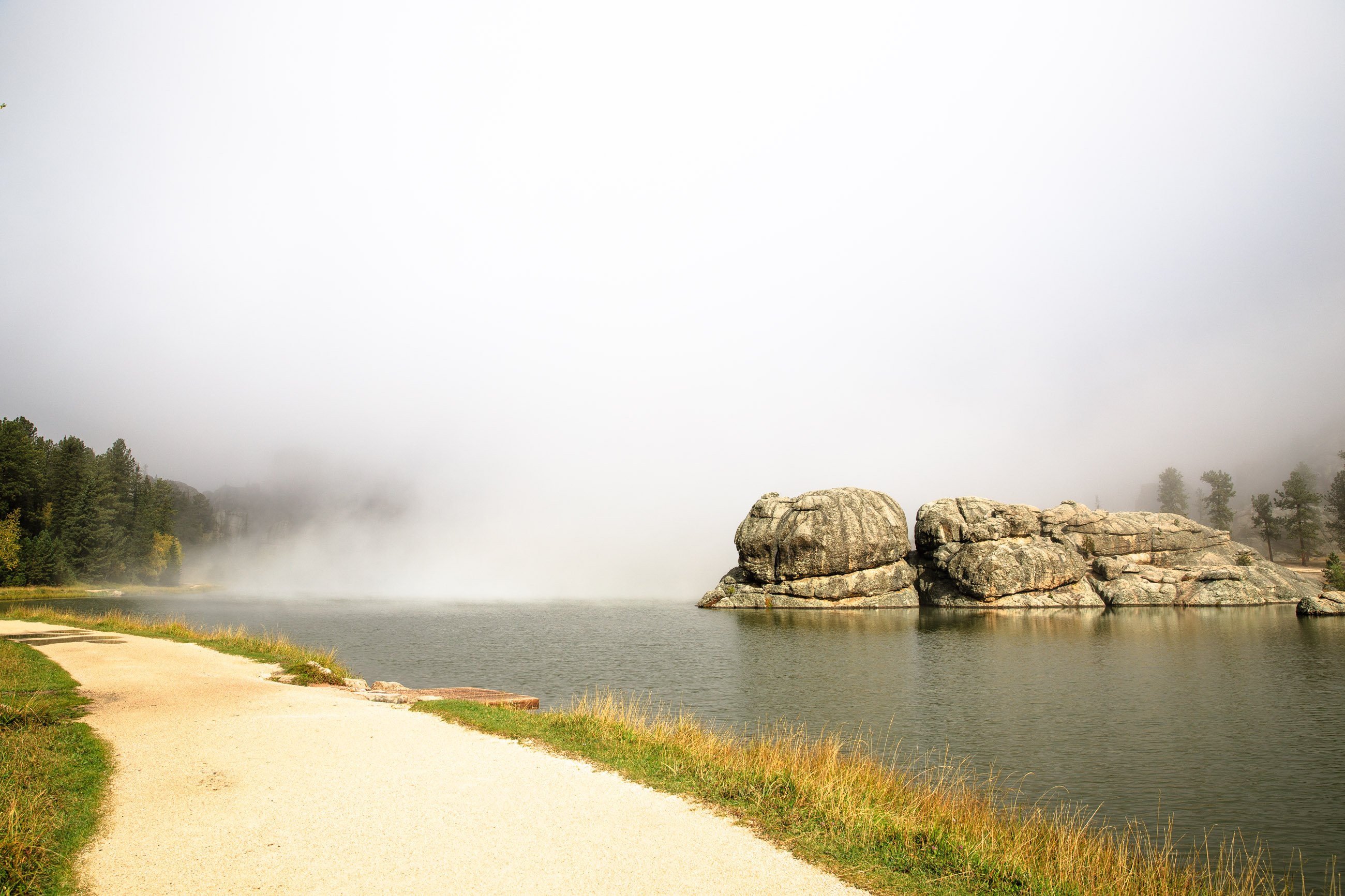 The fog lifted just in time for this shot, then reappeared moments later.

This would be our last stop along the highway, because the next tunnel was too low for our motorhome. As we arrived, the lake was shrouded in a veil of fog. We could barely distinguish the shoreline or any of the beautiful features that contour the lake. Nevertheless, as we walked the path towards the water we met with two fishermen silently casting their lines into the fog. You could only just see their silhouettes from a few feet away. But as luck happens to those who wait, the fog slowly started to rise, lifting its veil from the beautiful features around us. I approached one of the men as he was tending to his fishing rod and asked him if I could make a portrait of him as he cast away, resulting in a beautiful image in a dramatic setting. It was a perfect bookend for a dream-like journey. 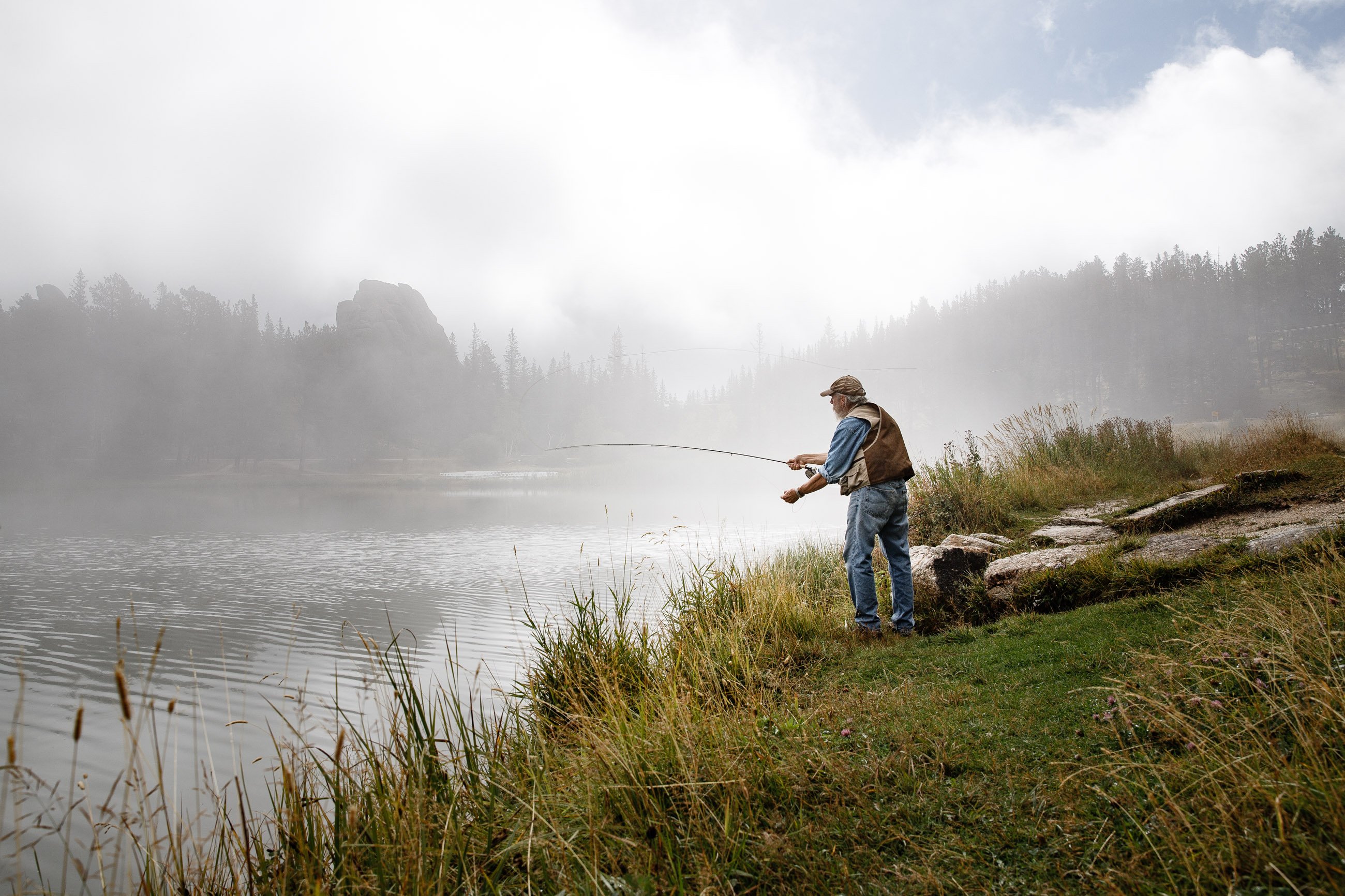 This fisherman hadn’t caught anything yet, but gladly posed for the portrait.