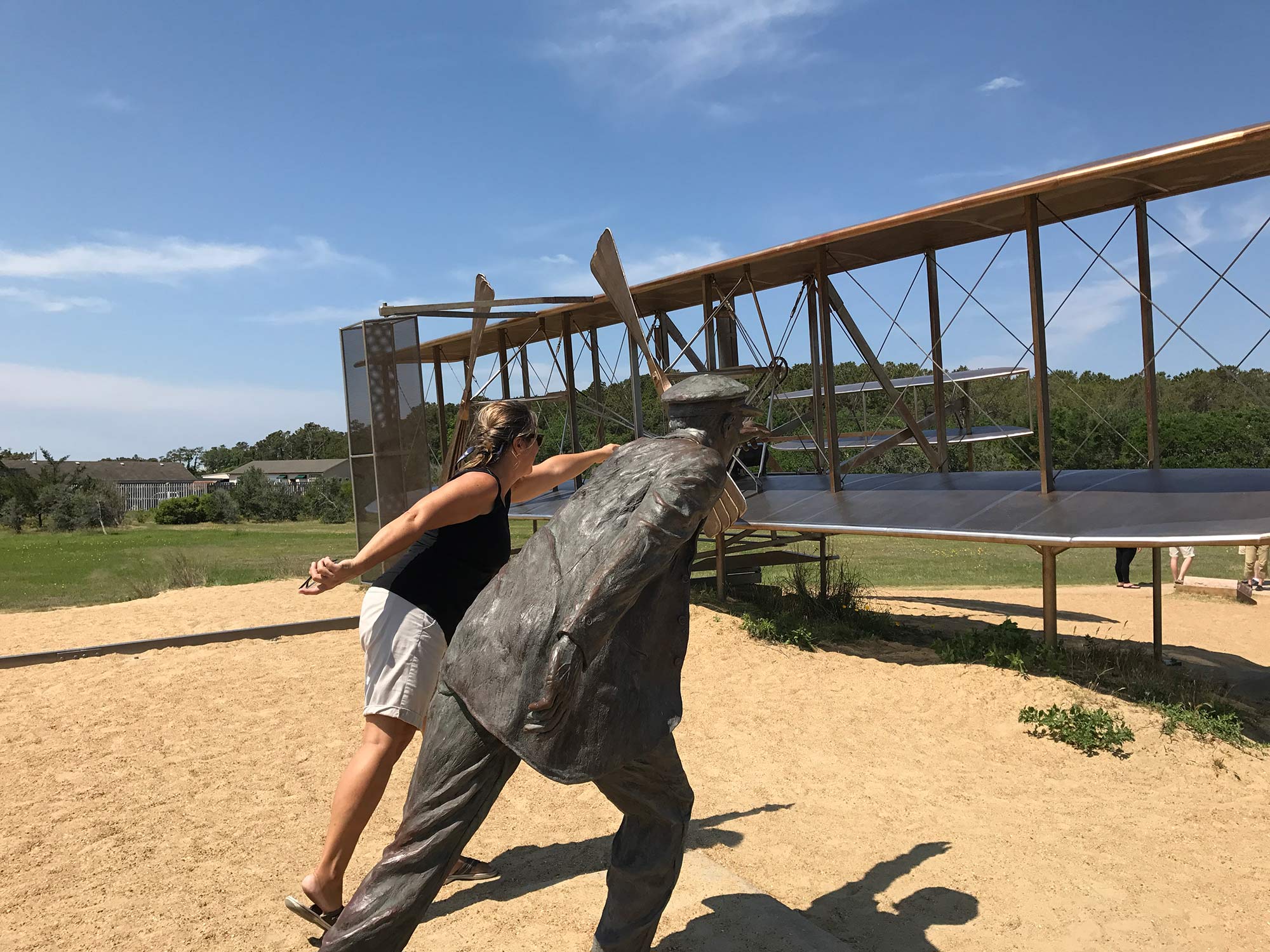 There’s Bodie and Ocracoke and Roanoke; the Islands. There’s Hatteras and Lookout and Fear; the Capes. There’s Currituck and Hatteras; the Lighthouses. There’s Avon, Waves and Rodanthe; the Communities. There’s Corova and Coquina and Duck; the Beaches. There’s Albermarle and Pamlico; the Sounds.

They are part of the OBX. There’s one highway that unites them all. And if there’s a highway around you know our six wheels are out there adventuring on it.

“The weather’s looking nice for the next few days” said Dave, “Maybe we should plan to go now? There’s a nasty system coming in after that!”

“Let’s get going, then” I replied, as I quickly prepped MoHo for the road ahead.

Whether cruising on our boat or driving the highways, we’re always and ever mindful of how weather affects our daily lives and routing. We were hoping for an awesome adventure ahead of us and certainly didn’t want to spend our days windswept away with umbrella in hand.

A quick phone call to the NCDOT and a totally affordable $30 credit card payment later had us confirmed on the two hour ferry from Cedar Island to Ocracoke that same afternoon. We were the only RV in sight as we embarked a few hours later. The time passed quickly as we explored, chatted with the crew who were curious about our Unity IB, and even had a nap in the cozy comfort of our home.

As we got closer to Ocracoke the skies were bluer than blue, the shallow waters around us calm, and the Air fresh with Sea and Salty smells.

“The Outer Banks. Hmm, what an odd name…“ I mused out loud.

“Sounds like that TV show” quipped Dave. “That science fiction twilight zone one?”

“Right! The Outer Limits…” I responded. “I used to watch that all the time…” And would you believe that, at that precise moment in time, we heard the ferry captain broadcast on the ferry speakers: “Please stand by…” We laughed out loud, and eagerly inhaled the anticipation of our arrival at the Outer Banks.

Located off the coast of North Carolina/Virginia, the Outer Banks  (OBX) are a chain of barrier islands separated from the mainland by the sounds on one side and the Atlantic Ocean on the other. As you might imagine, they’re exposed and weather beaten by either landfall or offshore ocean storms. Not to mention that this is one of the most hurricane prone areas north of Florida, resulting in the coastal waters around this area being named the “Graveyard of the Atlantic”.   Now you know why, even though we were driving, we were being a tad weather cautious.

And what unites them all? NC Highway #12.  The OBX Highway is a 130 mile long, two lane wide road and includes one (free) ferry and a bridge that drives you from one end of this incredible and very narrow chain of (is)land(s) to the other. Exploring it all, one mile at a time.

Please stand by. You are about to adventure with us … on the Outer Banks.

Standing by on the islands are lighthouses! Five of them to be exact. All of them gorgeous, but this one? Incredible. With its black and white candy cane type of stripe leading 208 feet high, where at the top the beacon of a light shines 20 miles into the horizon of an ocean on one of the most treacherous Capes in the world.

4 minutes and 19 seconds. That’s the time it took us to climb the the 260 some stairs to the top. Why? Well, it was a bit of a dare from friends! We wore (yikes) flip flops, and please no running! Our journey upwards had us stopping twice–once to chat briefly with the ranger, and the other? To catch our breath.

The ranger later affirmed that they train regularly on these stairs, as they need to be able to run up them should a crisis happen. Her best time? Ten seconds more than ours. So we did OK, right?

Outside on the tower, breathing in the blustery salty wind, we stood by gasping at the views of the marshlands and over yonder, at the eternal ocean-ended horizon. And at the very obvious trail that, in 1999, was landscaped into the geography as a 700 foot rail system moved the lighthouse, in its entirety, about 2900 feet inland.

In Nags Head we discovered sand, and lots more than just beaches of it. The landscape here is one of the things that never just stands by.

The State Park here is called Jockey’s Ridge and is home to 420 acres of expansive flats and mounds of sand, and also the tallest natural sand dune system in the Eastern U.S. We walked for a long time, and wondered why it was named Jockey’s Ridge.

“Jockeys? As in relation to horses?” asked Dave.

“I guess that way back the people who lived here captured the wild ponies and raced them on these sands” I replied. “People came to watch the races, staying out of the way up here on the ridge and voilà…Jockey’s Ridge.”

Walking on the beige coloured medanos (massive, asymmetrical, shifting hills of sand lacking vegetation) we were in total awe at the immenseness of what we were experiencing. And wondered, as the wind picked up, about sand storms.

“Did you know that there is a local putt putt course that got buried under one of these mounds?” I said to Dave.

“Hmm…” he replied, as he looked around. “I wonder where…”

Whilst we never did find any buried mysteries we did notice some people on top of one the mounds off in the distance. Hang Gliders just standing by.  Bravely facing into the wind, waiting for that giant leap of faith that would propel them into the skies.

It is on Kill Devil Hill in Nags Head that on December 17 1903, another 12 second leap of faith made history. Where for the first time a machine left the ground by its own power, moved forward under control without losing speed, and landed on a point as high as that from which is started.

Why here? This area was private and sheltered from crowds, and provided strong and consistent winds. And the sand? Made for a soft landing. Here Orville and Wilbur tested and retested, calculated and recalculated, built and rebuilt their ideas. And definitely climbed and re-climbed Kill Devil Hill countless number of times each and every single day, in anticipation that one day, one trial, one improvement…it might all just fly.

Where today at the very top of Kill Devil Hill, we humbly stood by the 60 feet tall Wright Brothers Monument in awe at their accomplishment, and wondered…

These are just some of our Adventures on the OBX. Thanks for tuning in. We now return control of your computer screen back to you. Please stand by…for our next adventure. On On!