As things turned out, during the 2019 Annual Fall Rally, I just happened to be along on the factory tour being conducted by no other than… 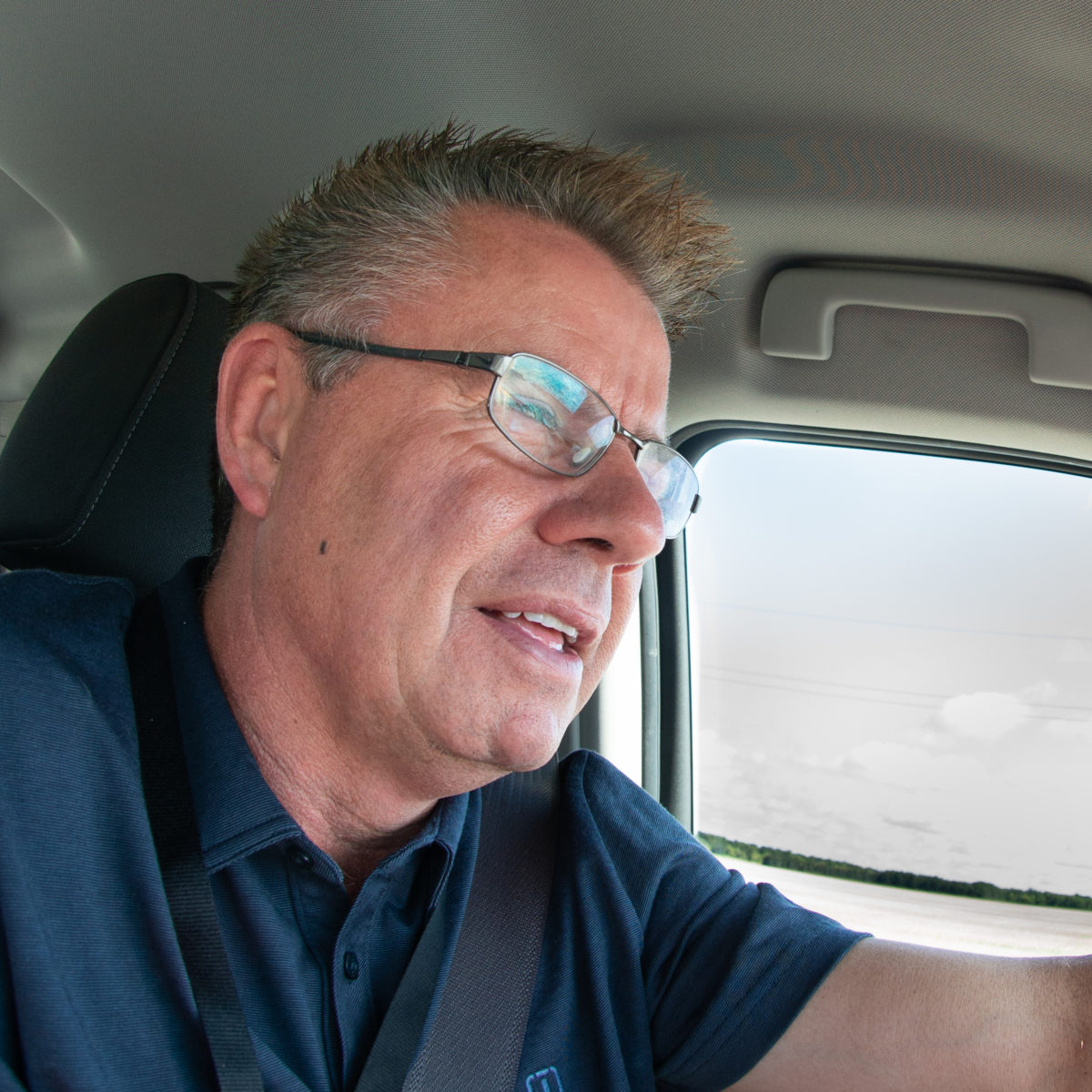 And from there, on with the tour. Some of the photos are taken with a “fisheye” lens, so hold on. 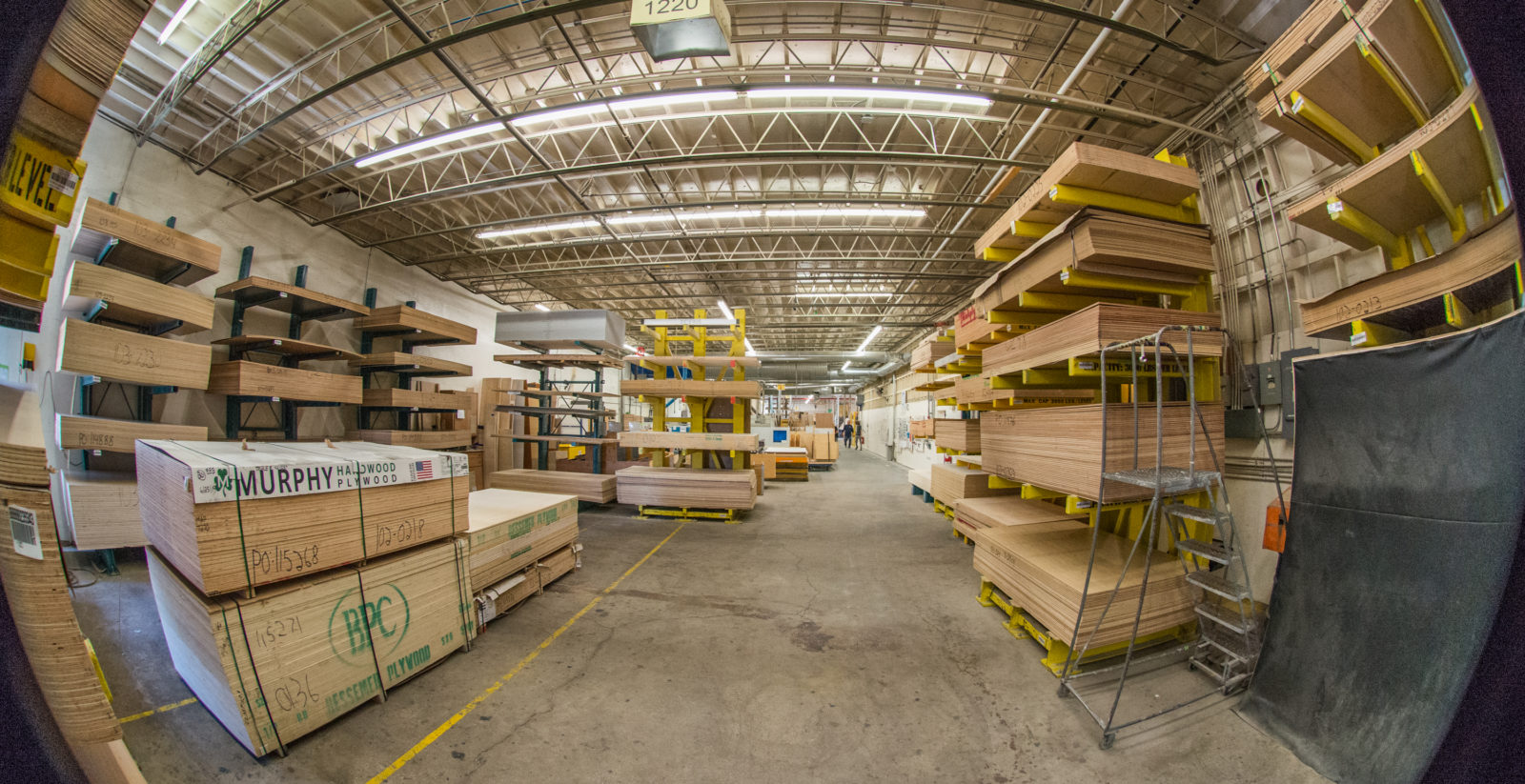 The tour started with a look at some raw materials. Of interest here is that the cutting of wooden parts is done by computer, resulting in a final product of unbelievable precision and a near-perfect fit of the components. My RV experience suggests this is uncommon among RV manufacturers, but it is routine at LTV. 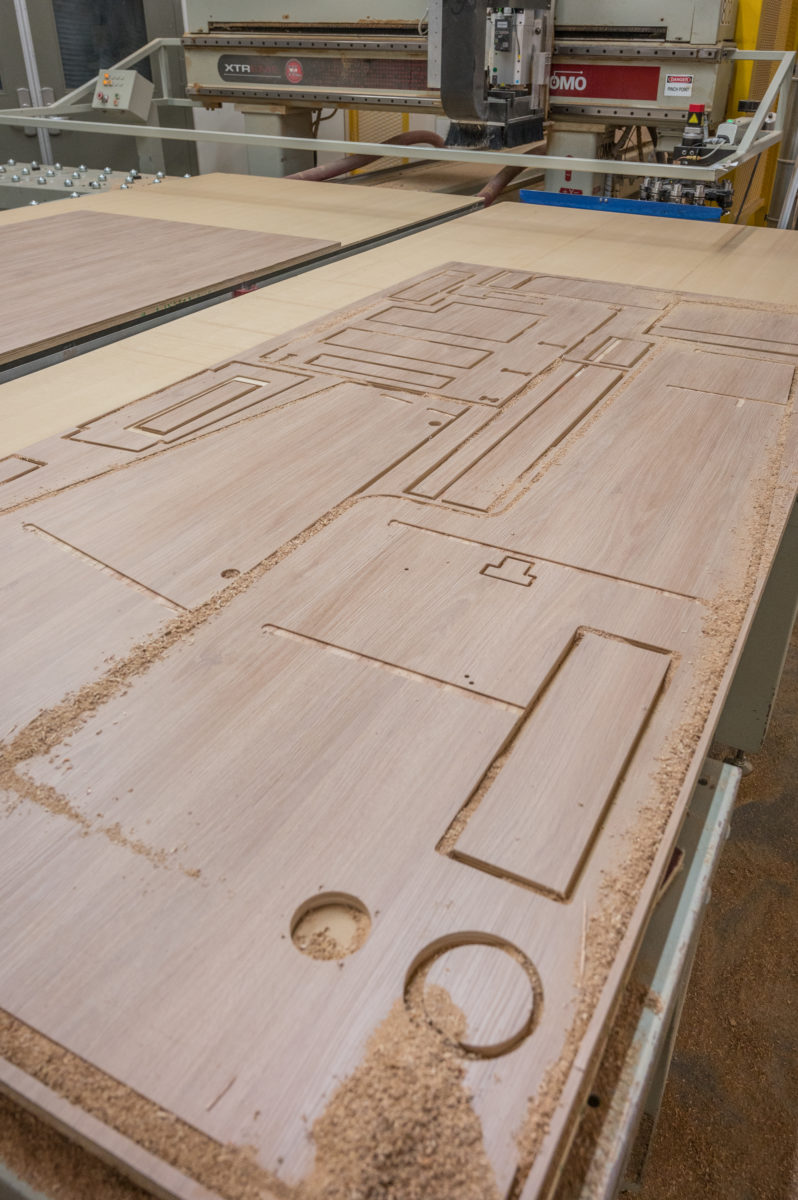 Fiberglass components are all sprayed and then rolled out by hand, once again producing the highest-quality end product. Even the taillight housings are manufactured to precise tolerances. 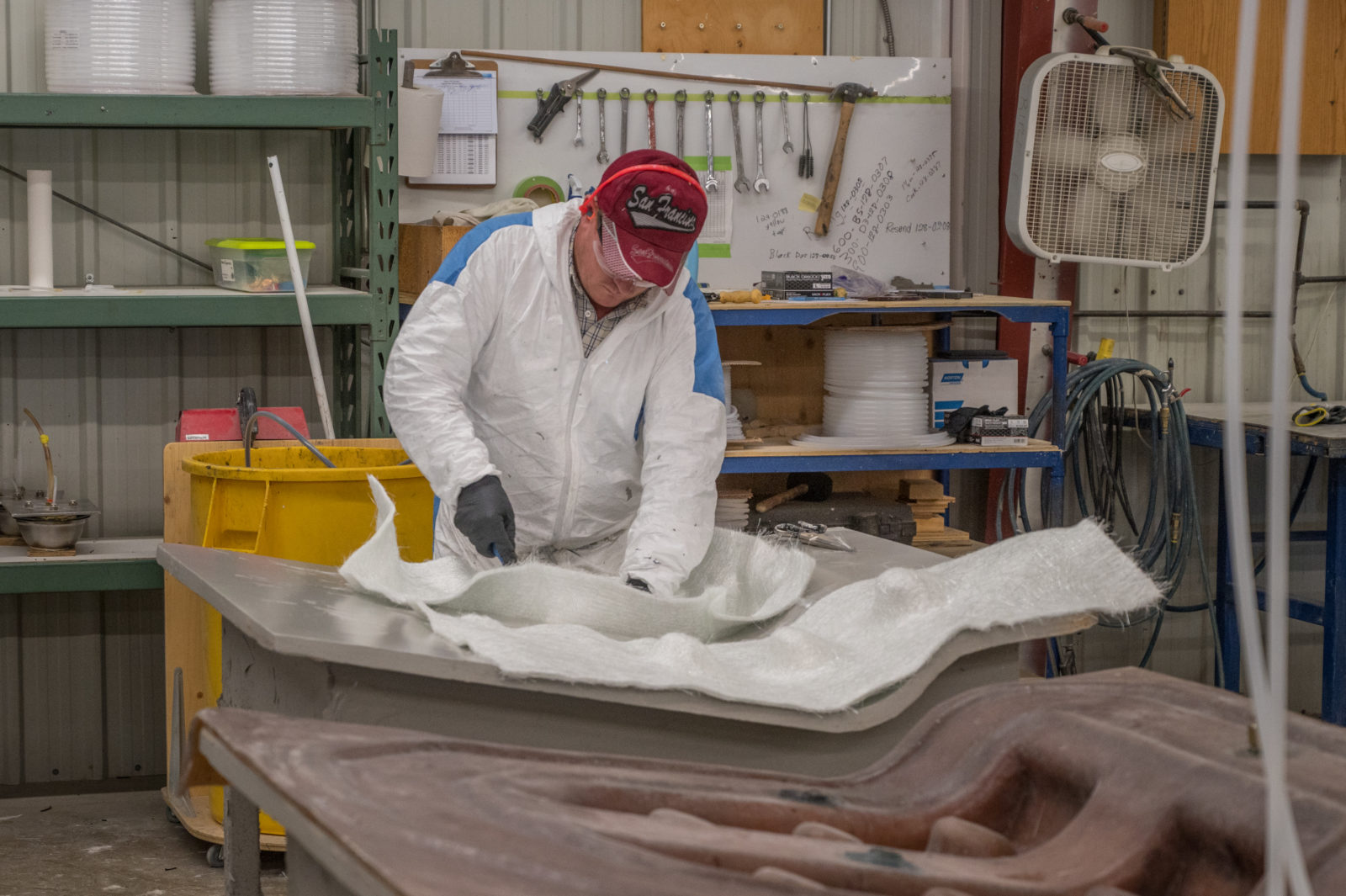 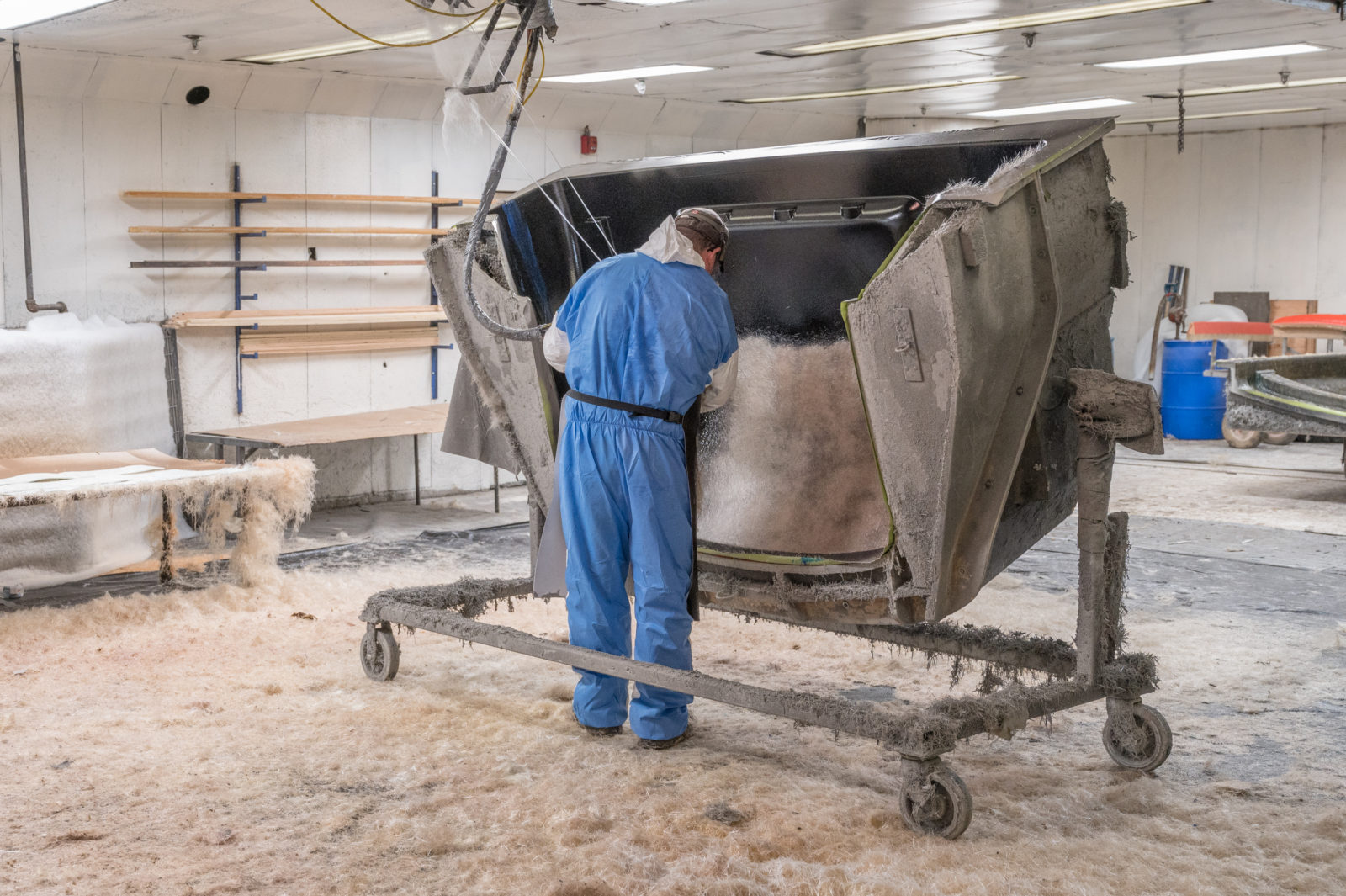 During the tour there seemed to be a couple of people following us, apparently shooting videos and stills. When asked, Dean said, “I have no idea who they are.” 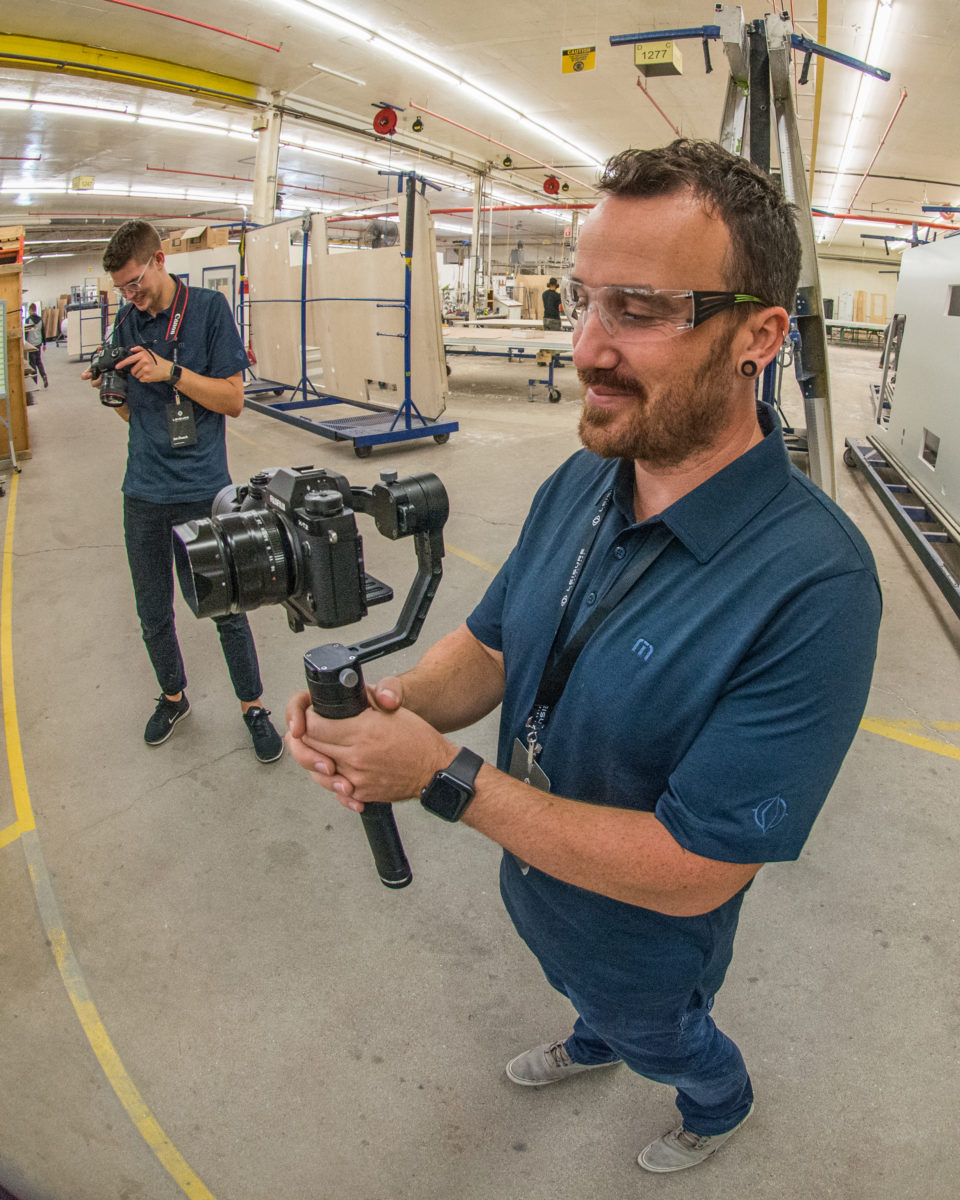 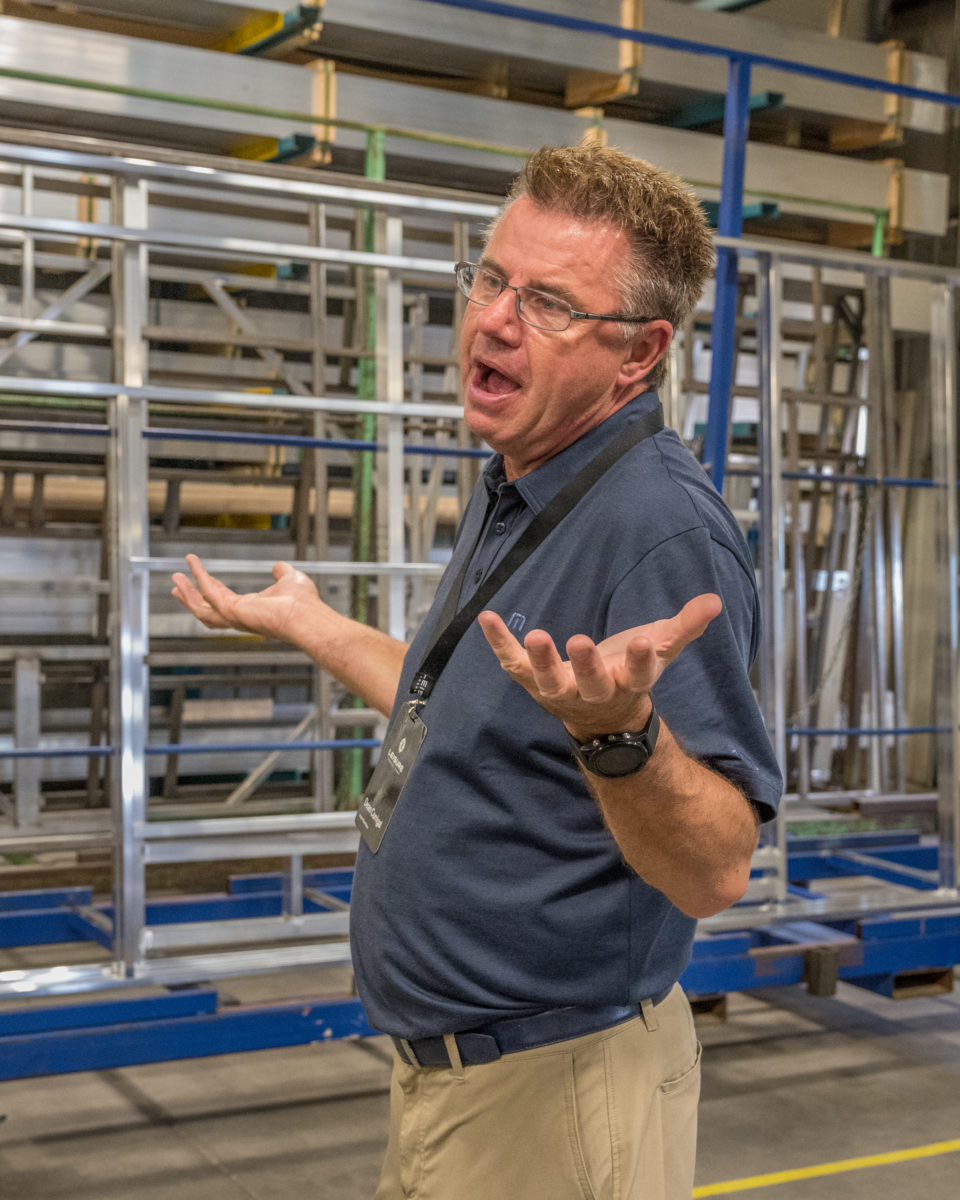 Next, we saw how components are welded together on precision jigs, then it was on to the finishing of the parts. This is all done by hand with close inspection, sometimes using special lights to find any flaws. 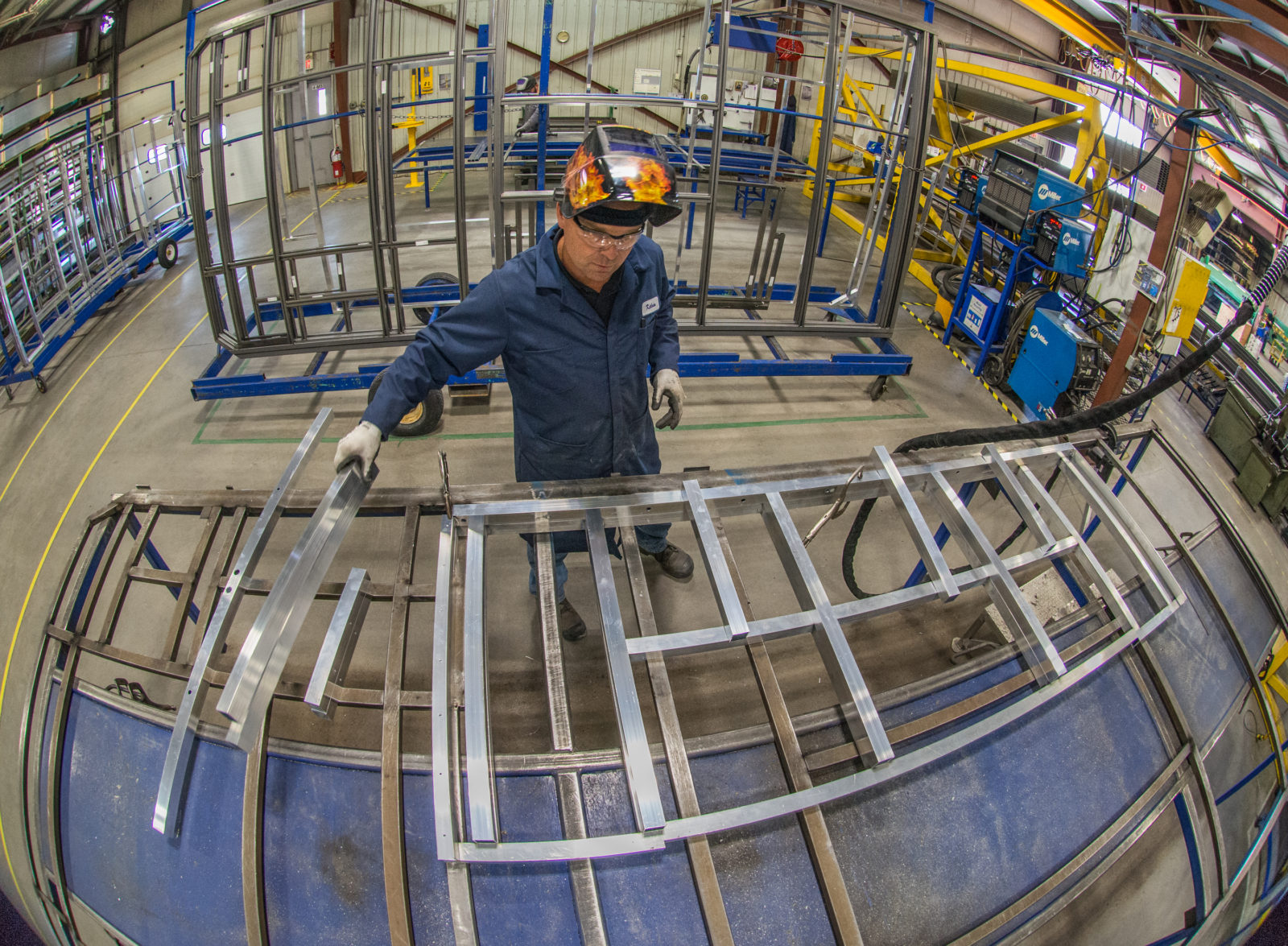 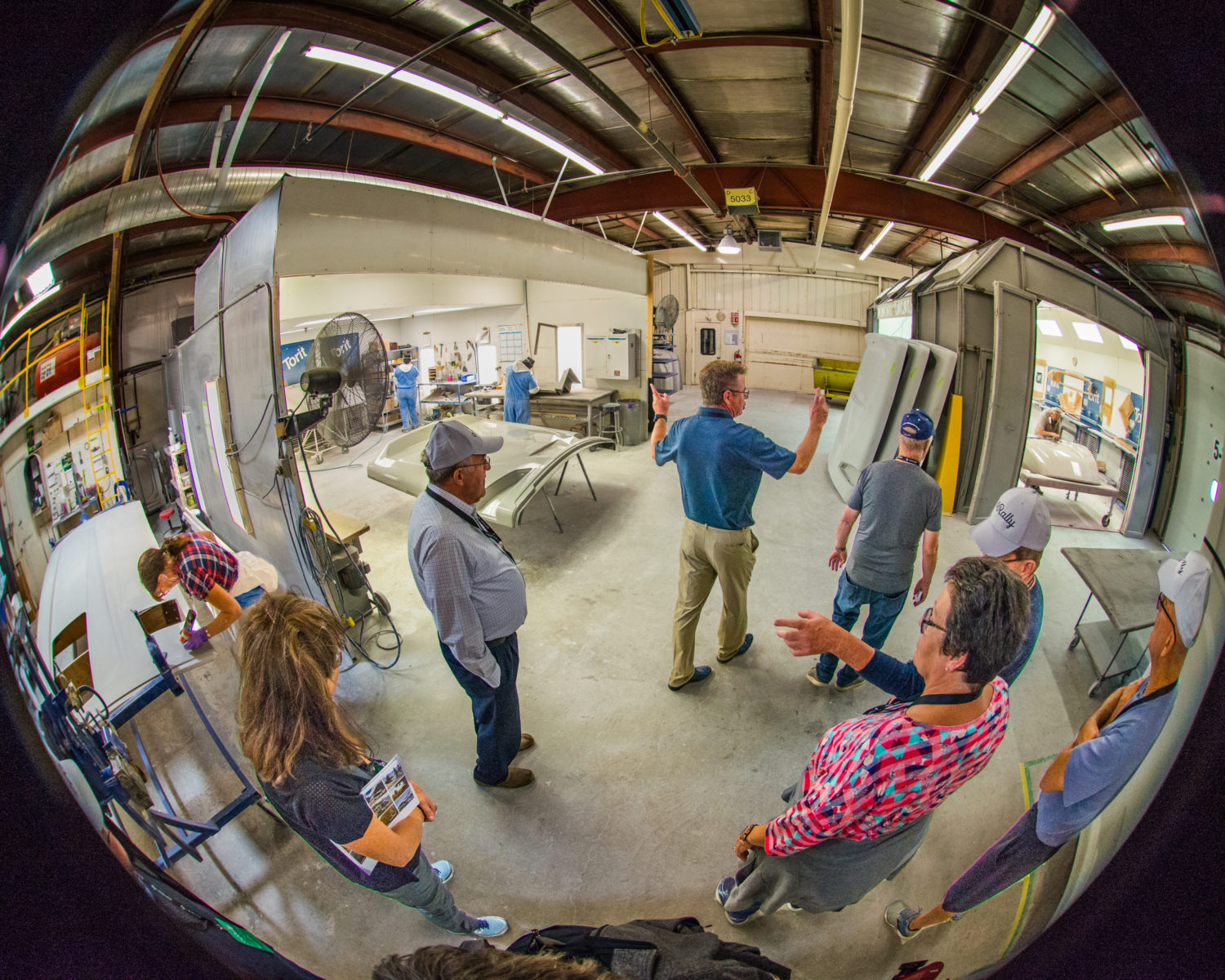 This step was followed by another examination of the frame. Some of the tank components have been installed, but also noteworthy are the blue rods shown below. These are precision leveling devices used to make absolutely certain that the chassis is perfectly true and level. This assures that the upper structure, when attached, will be true and plumb in its final iteration. 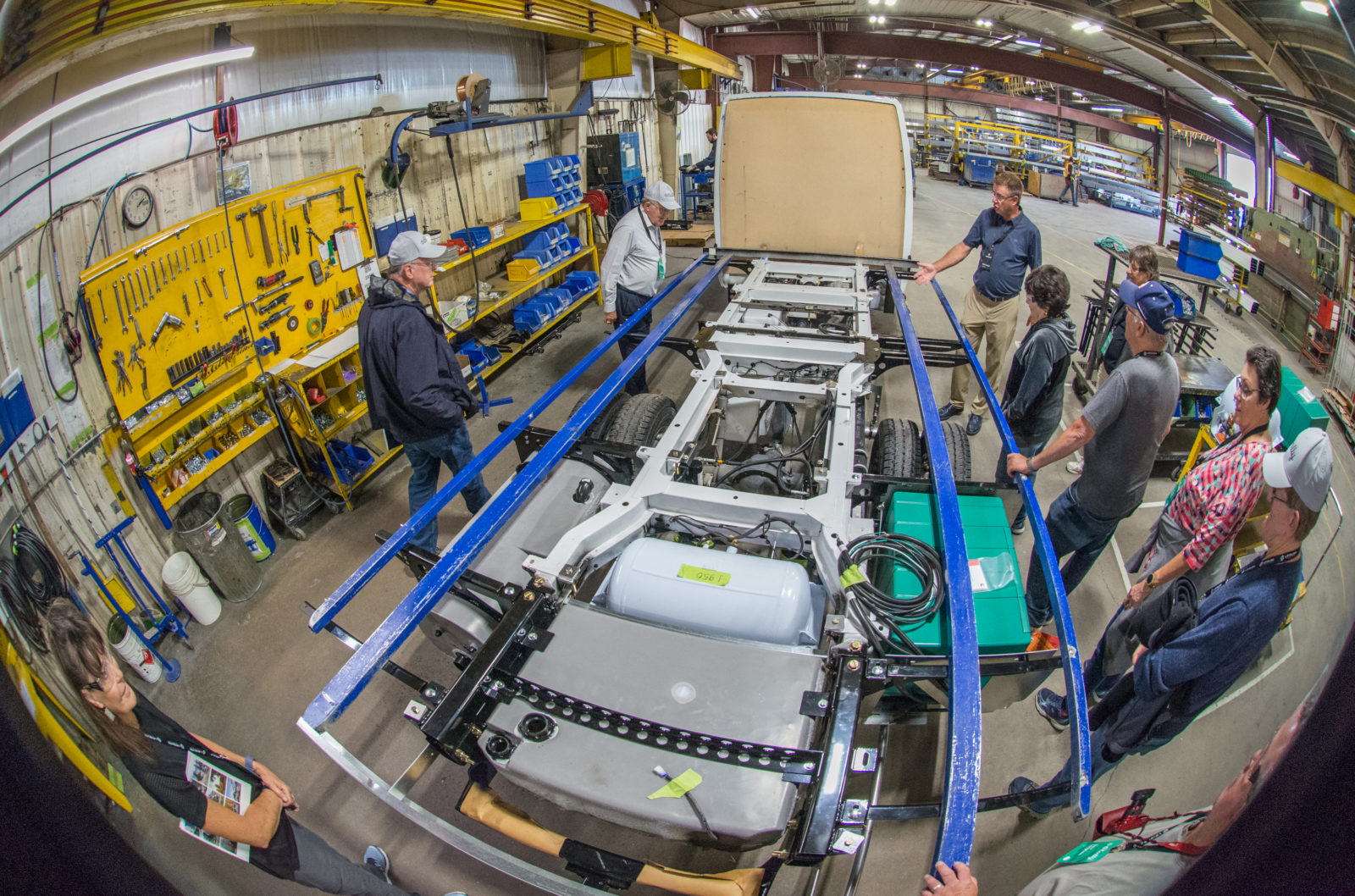 Special tools are used throughout the plant to assist in the precision assembly of the parts. The cutting of upholstery fabric is done by hand with patterns drawn using precision templates.

The workers all seemed to be enjoying their jobs! 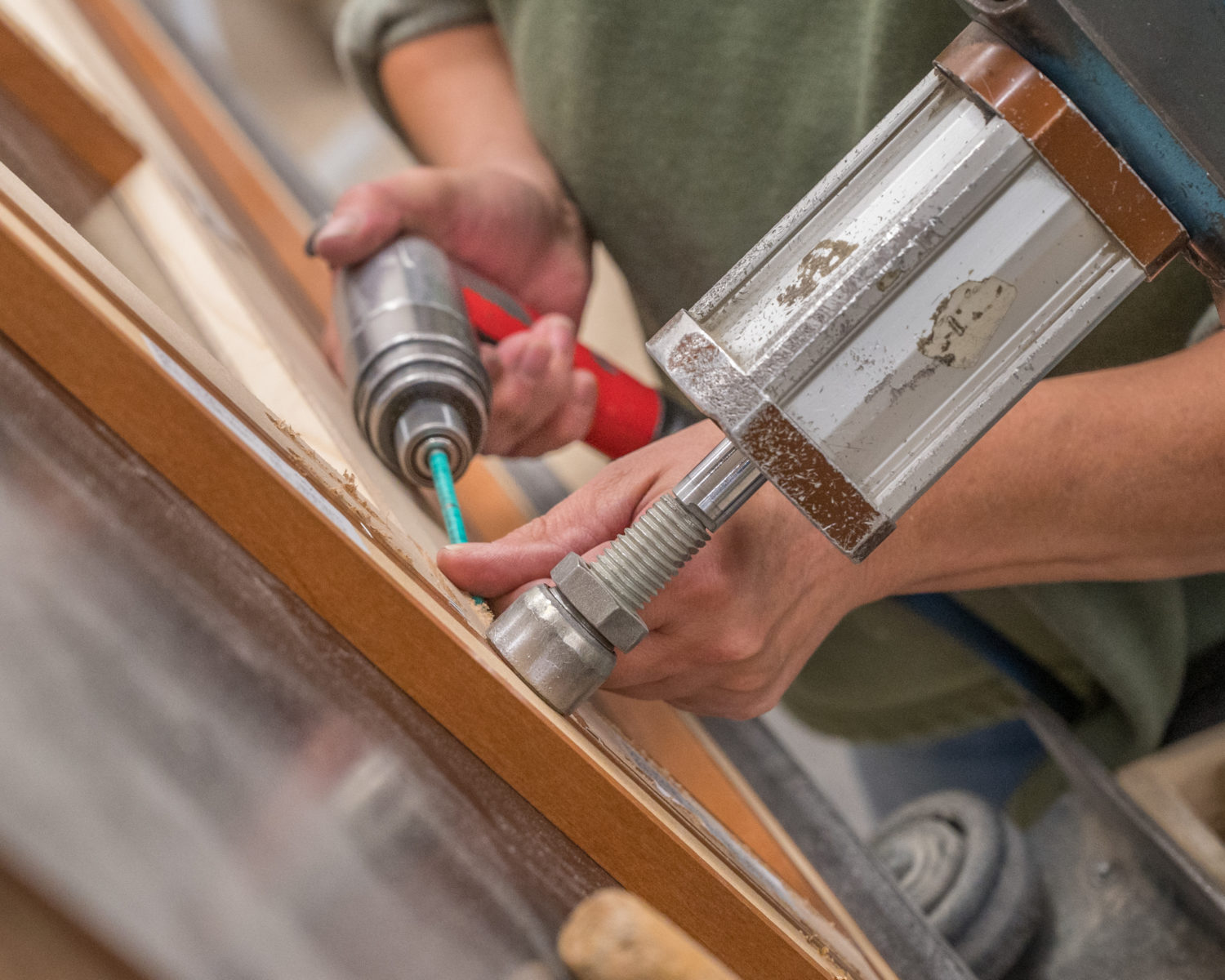 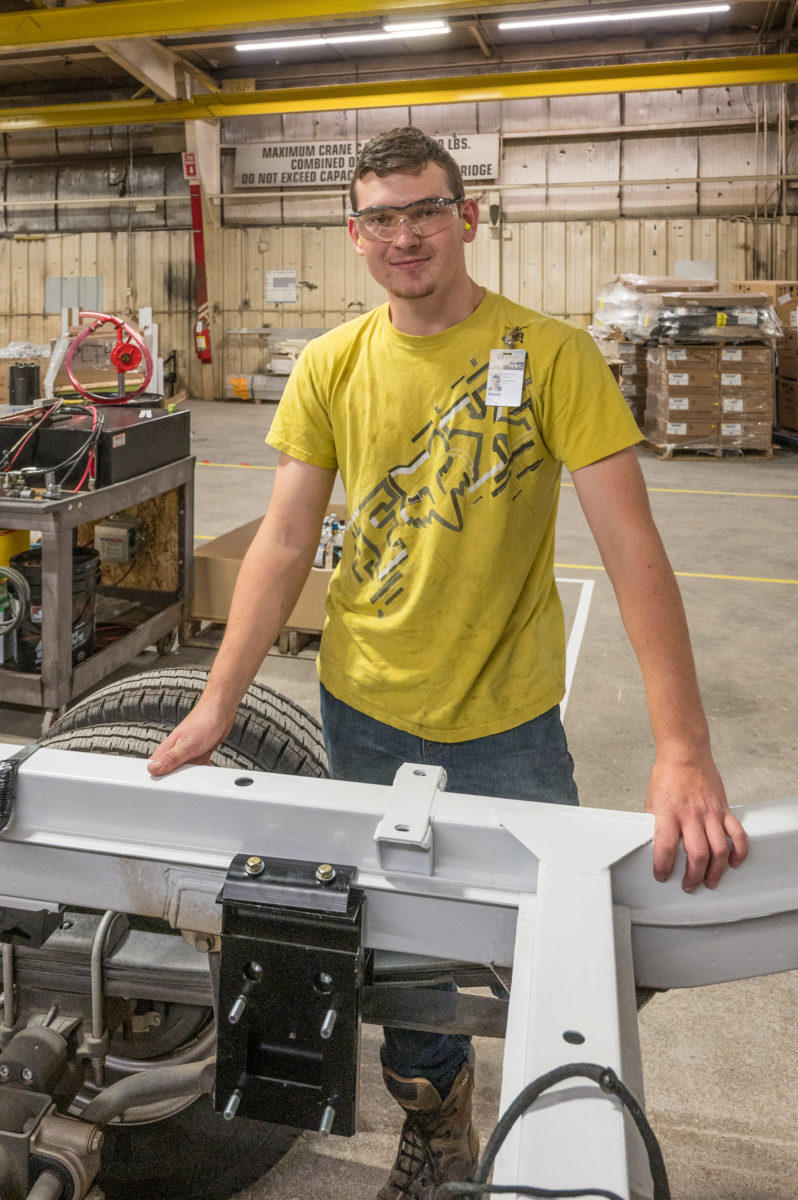 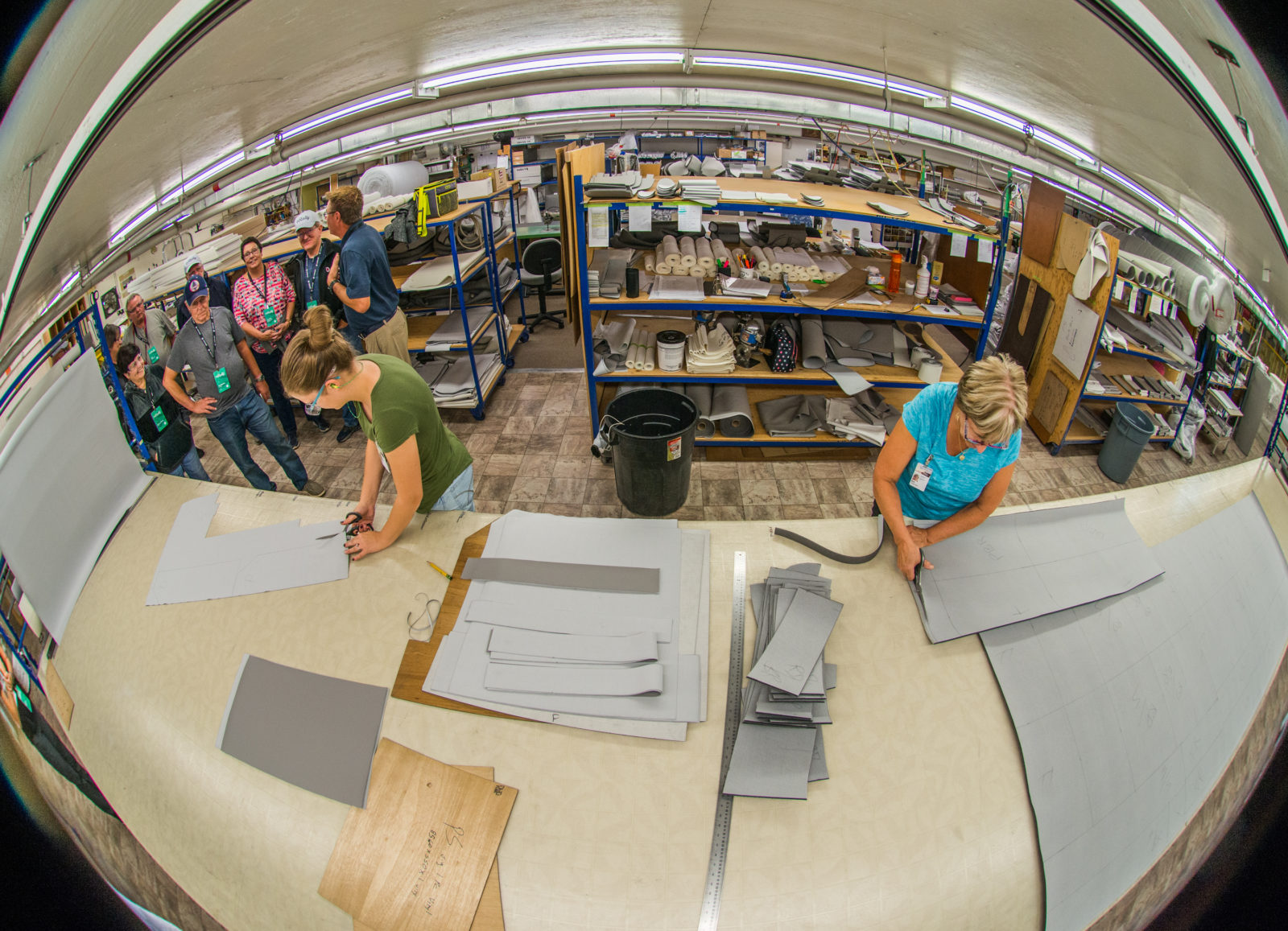 Dean showed us a pantry, one of the most-liked features in my LTV, and we saw a corner bed coming down the assembly line. It was a pleasure to see how the plumbing and wiring is done with such exactness; again, a feature not often seen in the industry.

During the process of upholstering the seats, “silent plastic” is used to cover the original seat. This eliminates any noises from materials rubbing together. 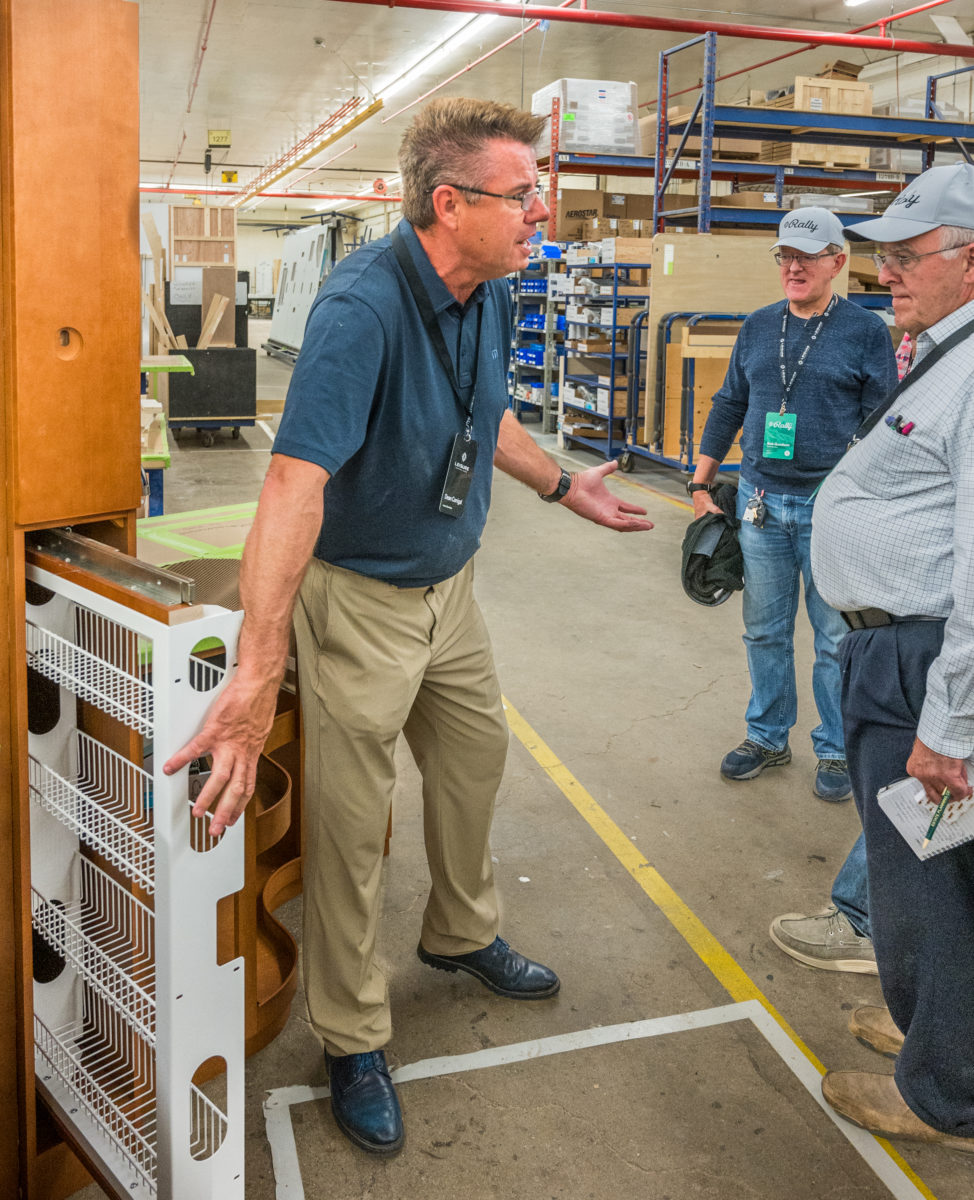 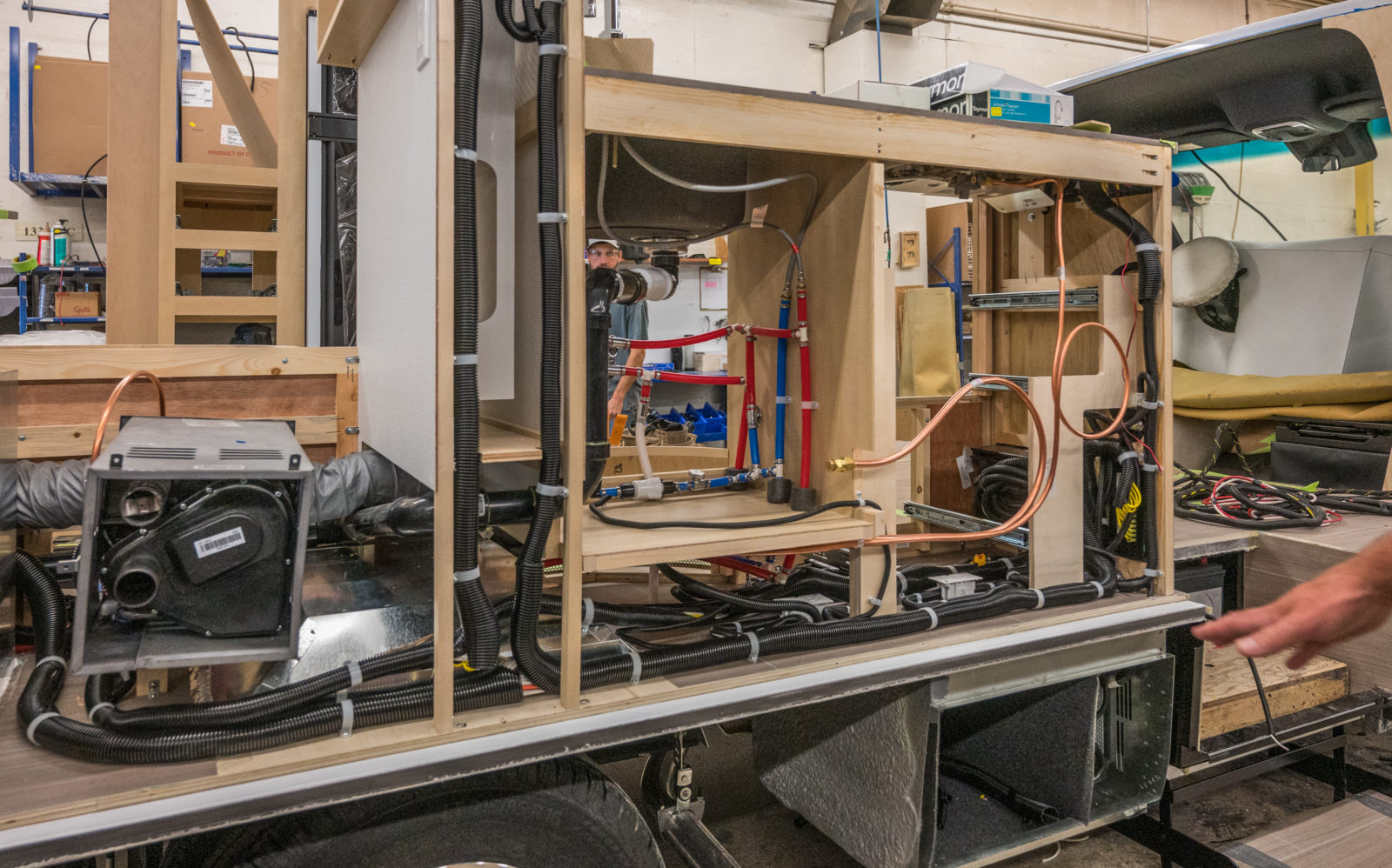 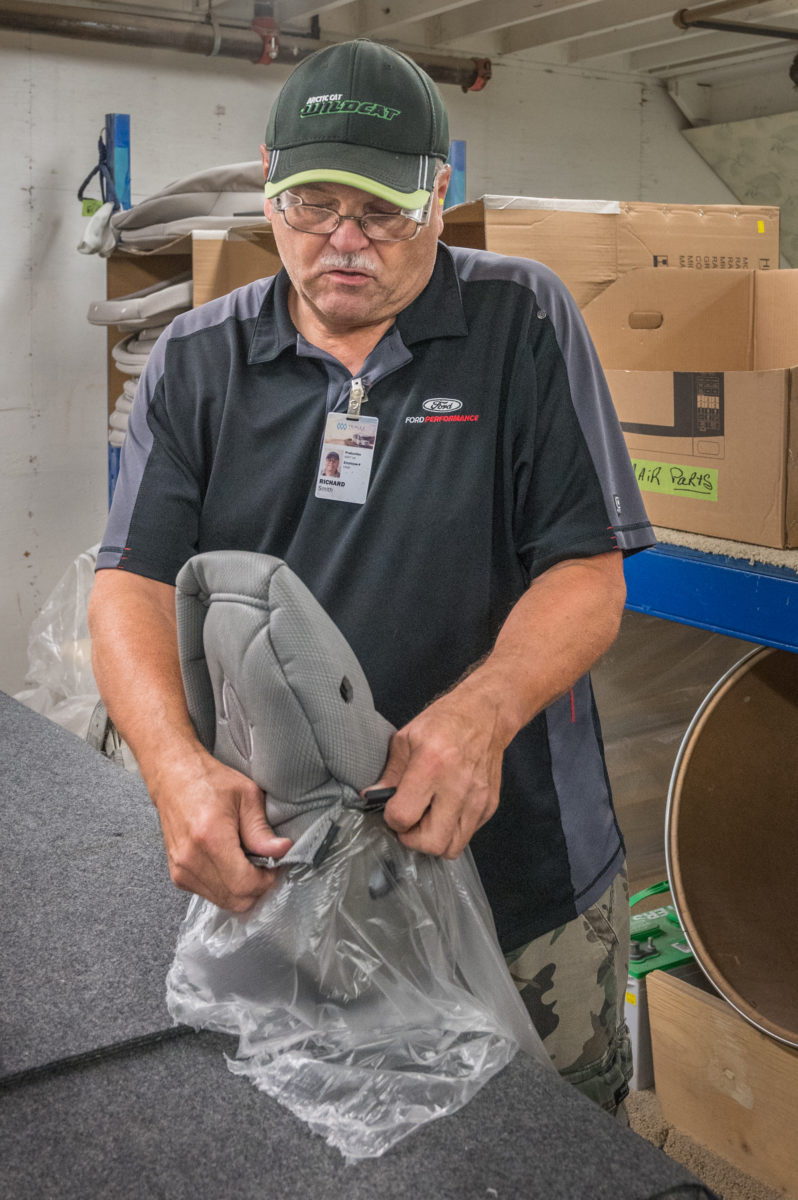 On the tour, we learned that the LTV Sprinter frame is noteworthy for durable paint as well as the fact that no holes are ever drilled in this frame during the manufacturing of a Leisure Travel Van. Instead, everything is bolted using M-B factory-specified holes.

In another funny shot from the rafters with the fisheye lens, the roof for a unit is coming down the line. And, a bit further along we see it in place! The unit has been into the paint booth, but only after a huge effort in extensive masking and preparing the surface for painting. The final image below shows the unit after the application of the color coats, prior to the final two clear coats. A total of eight coats of paint has been applied to the colored areas of an LTV when complete. 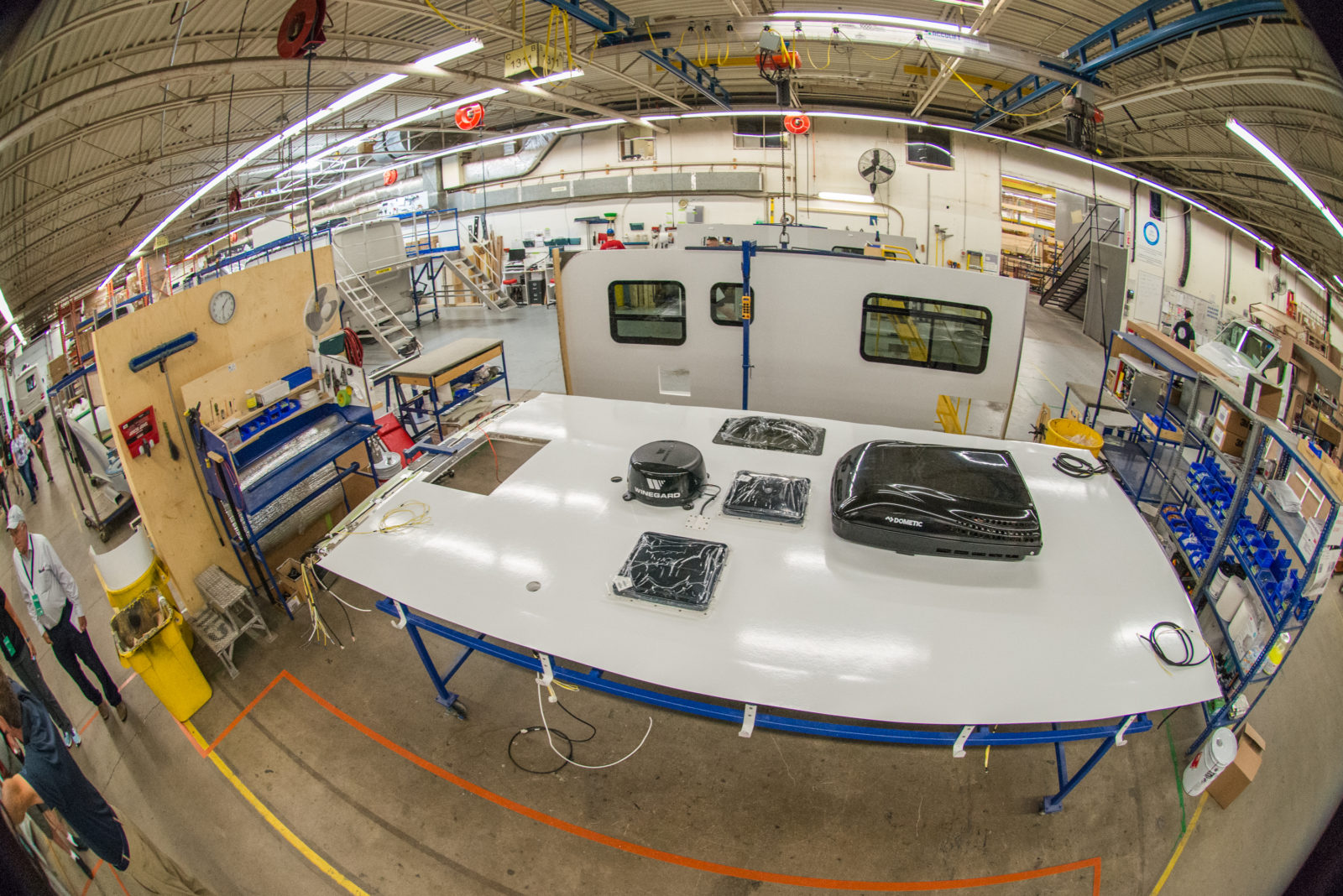 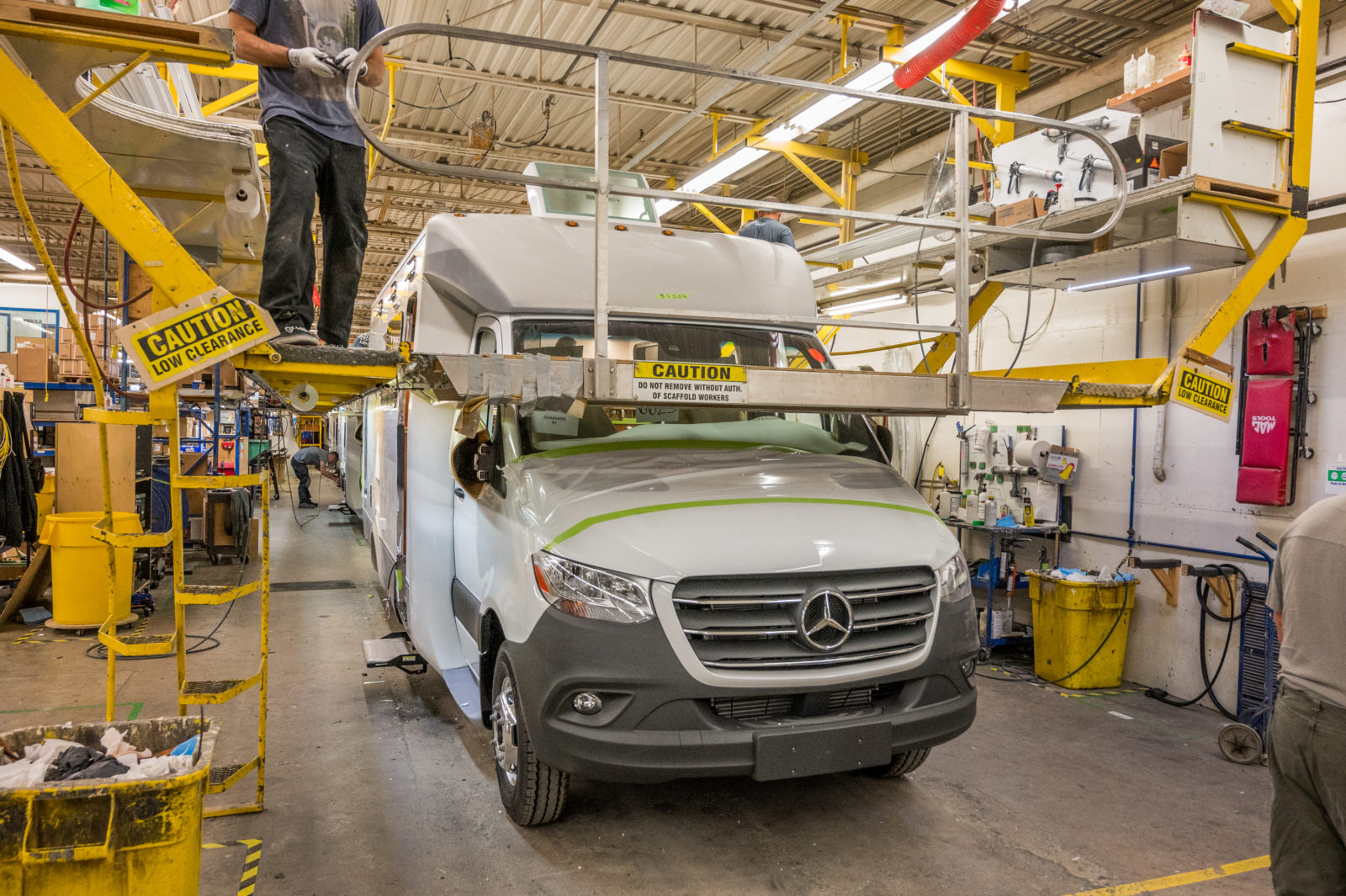 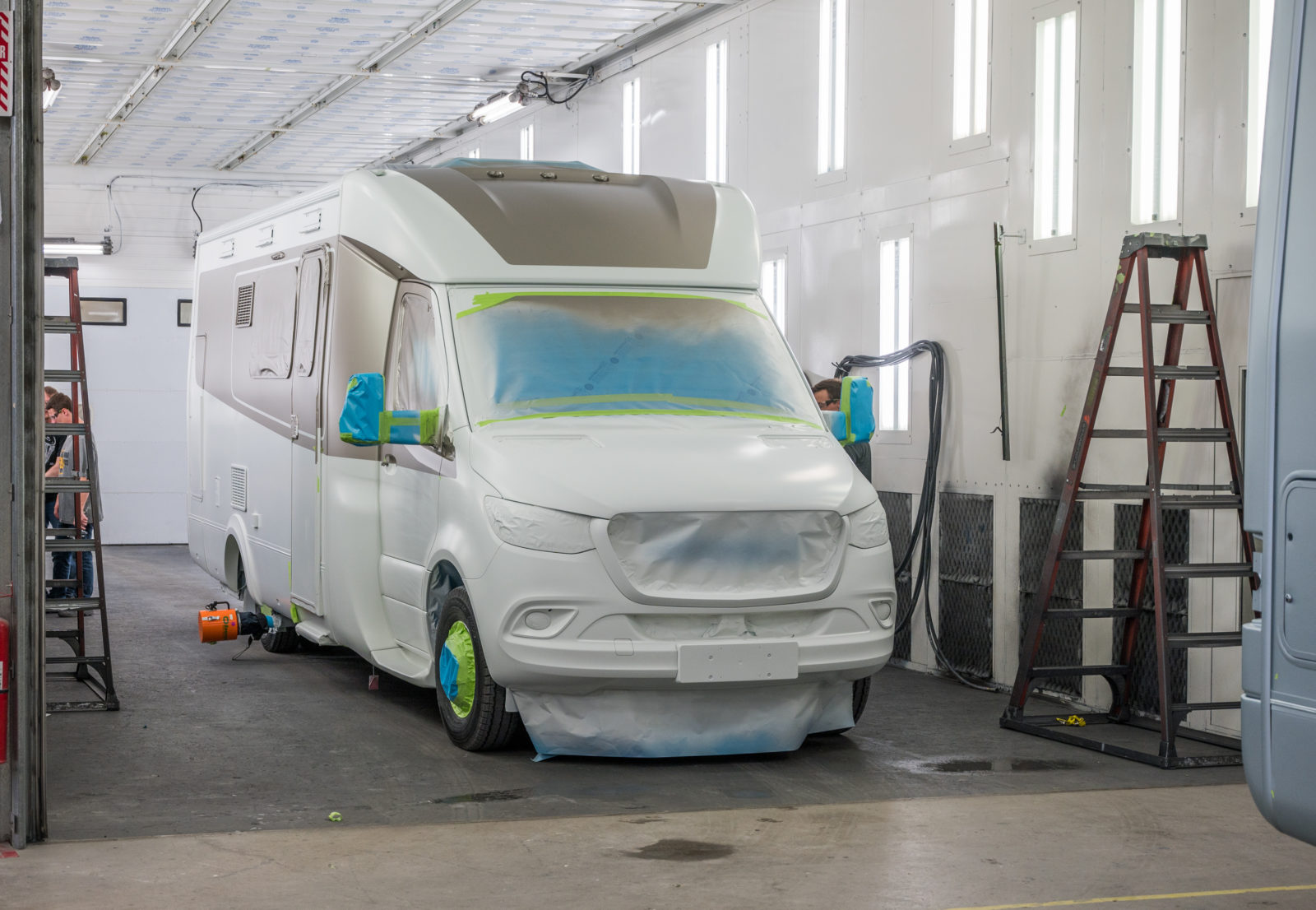 After painting comes the job of unmasking, which must be done very carefully so as to not harm the painted surface. Then comes the final inspection, where any flaws are expertly corrected to the point that they are undetectable. 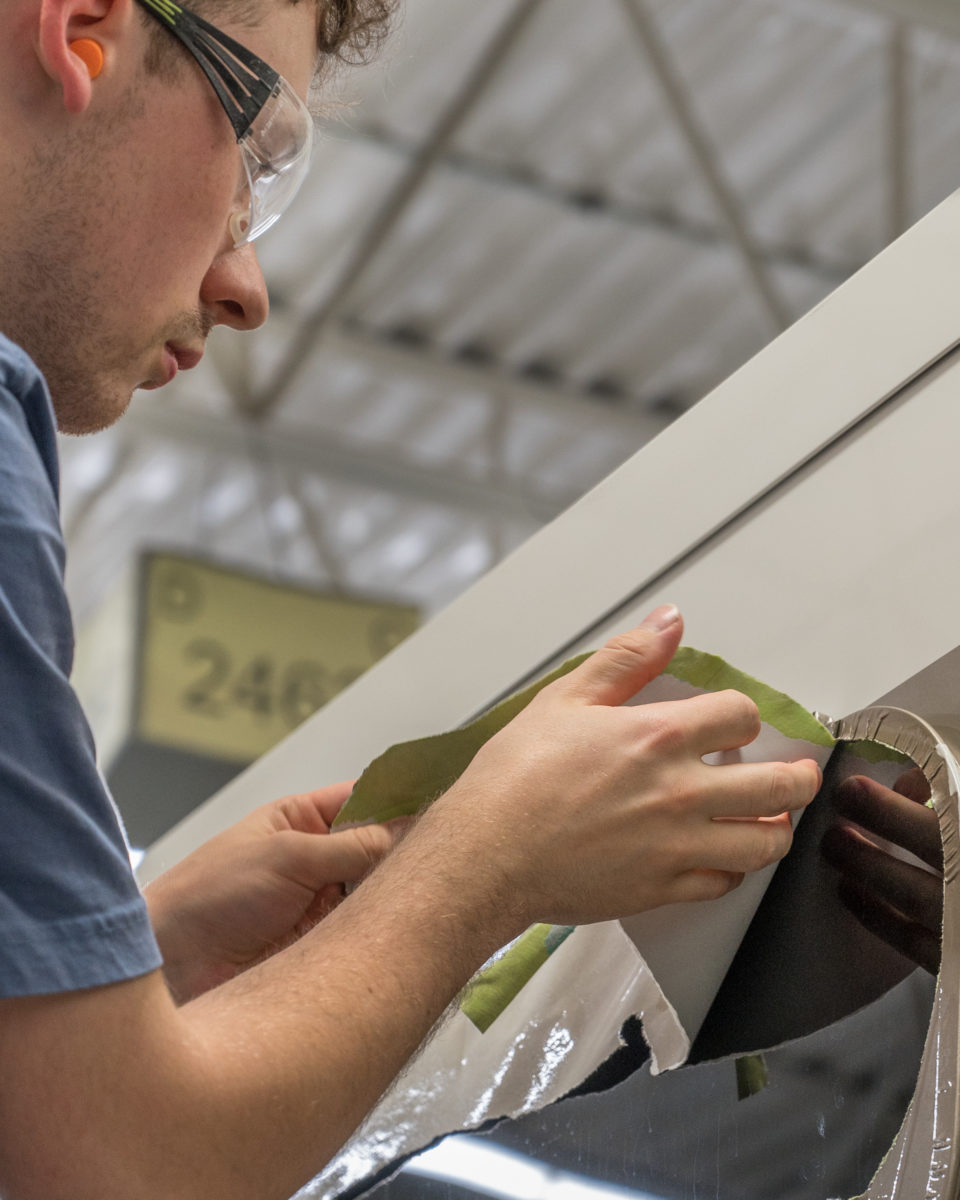 That sums up the actual tour, but what I found of special interest was how the plant functions not from a mechanical point of view, but from a philosophical perspective. This is what they call “KAIZEN.” 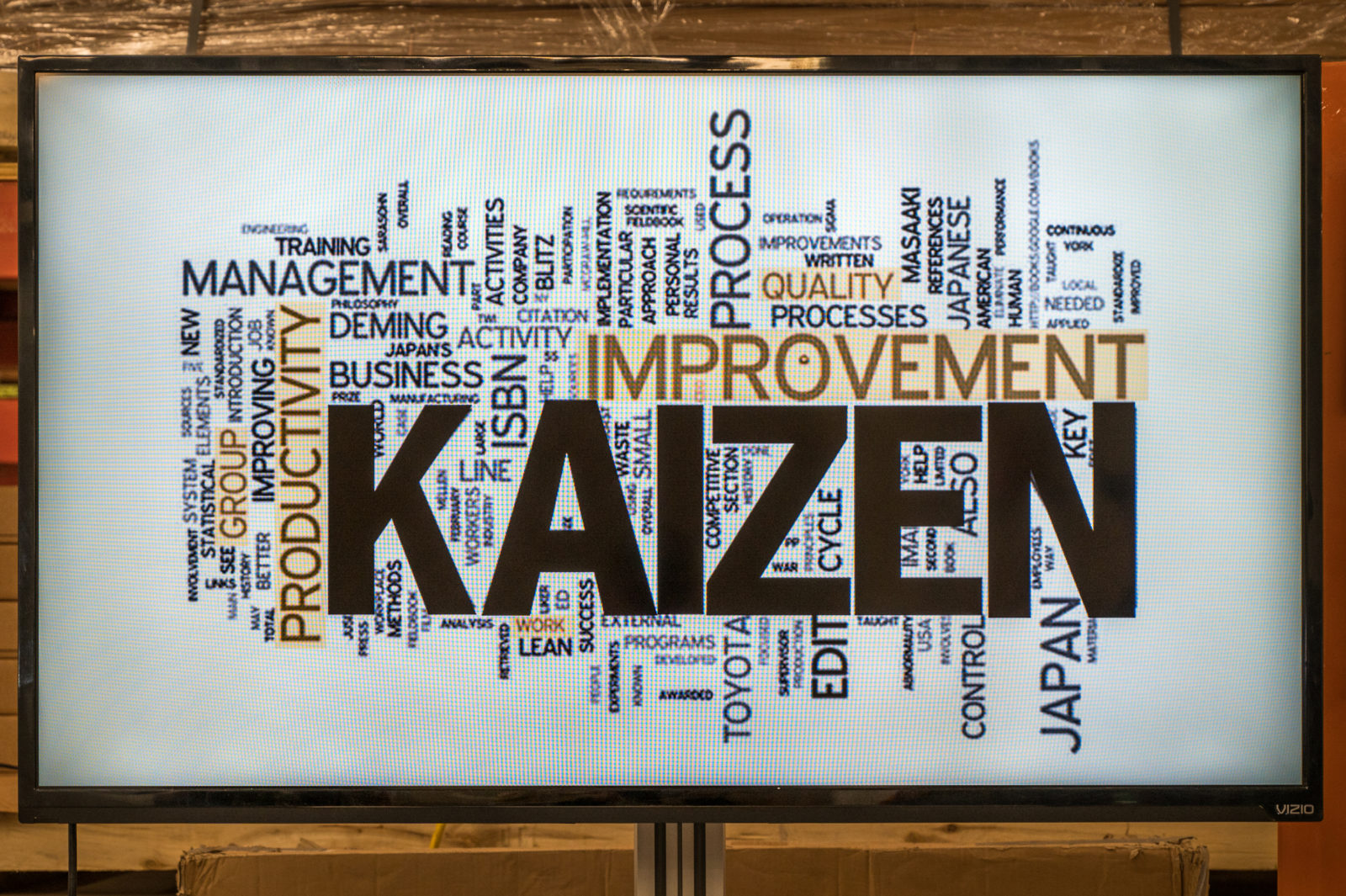 I cannot do justice to explaining what all this is about, but what I saw and heard suggested to me that KAIZEN resulted in the production of the top-of-the-top in recreational vehicles.

It is my impression that the empowerment of every employee, as a member of the larger team, to offer suggestions which are processed, evaluated, and most of all, respected, is why each employee wants to do their very best. Mistakes are a part of a learning process and not something for which one is criticized. Boards like the one below are seen all over the factory, and while I do not understand it well, these allow the employees to have a voice. 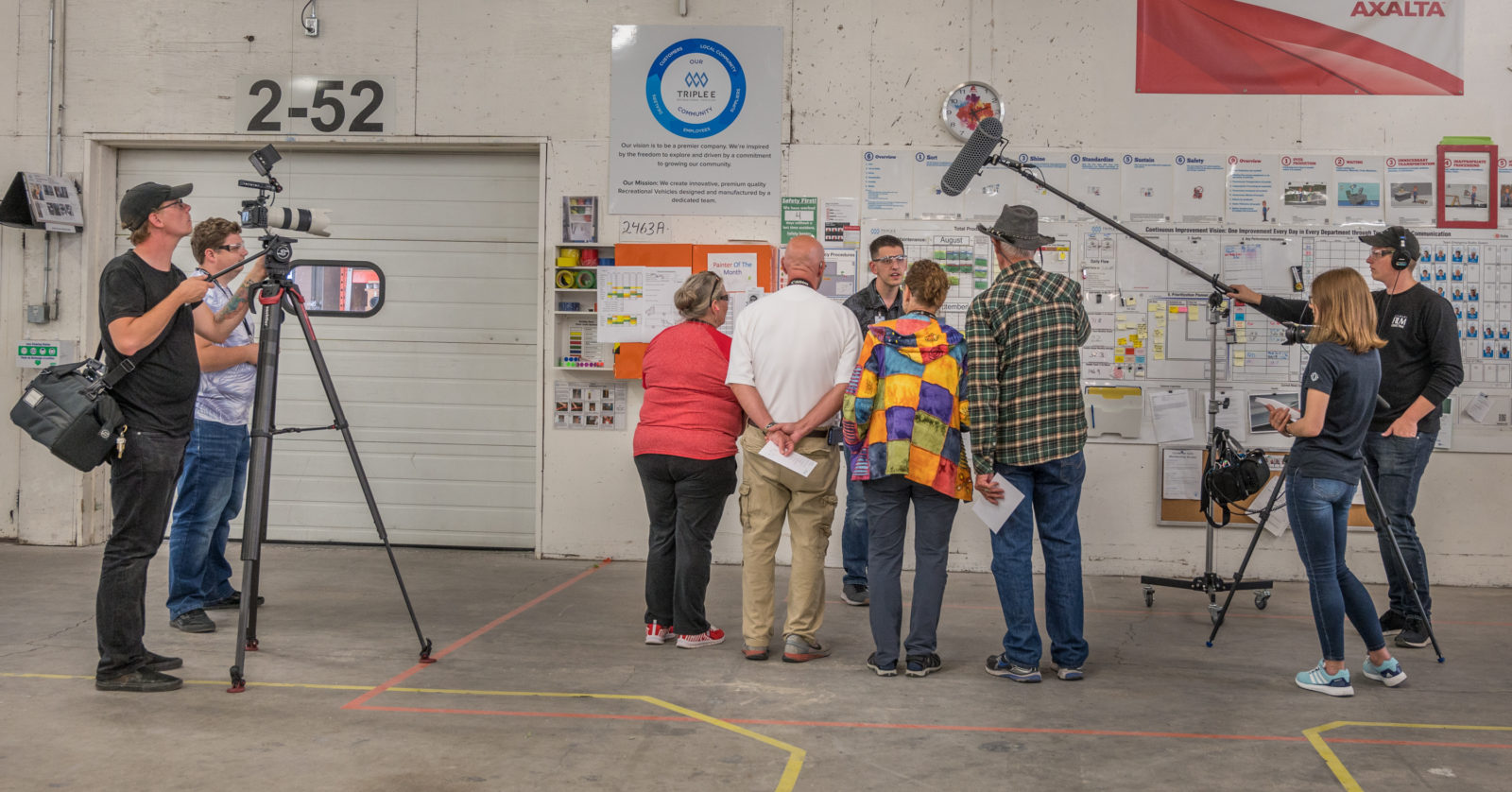 So not only did I see a recreational vehicle being constructed by hand, I was allowed to listen to the very essence of employee relations which is behind the “handmade” philosophy of each Leisure Travel Van. Look into the faces of the employees, and you will see why we who have the privilege to drive a Leisure Travel Van can be very grateful. My sincere THANK YOU to all the folks at LTV who are responsible for this privilege.