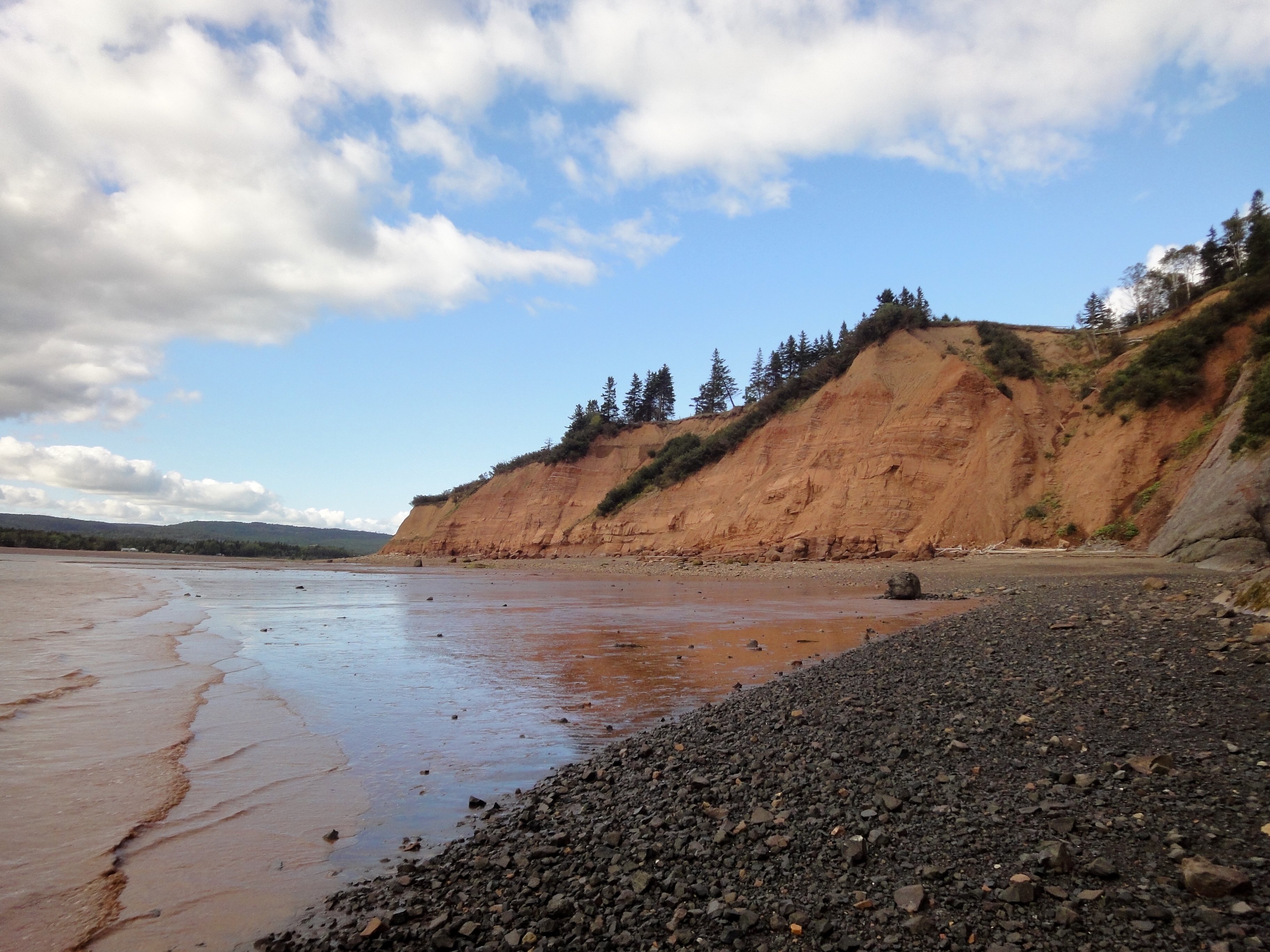 What do a truly Canadian maritime province, a Mi’kmaq legend, incredible natural formations, some of the best clams and chips around, and a hunt for golden treasure have in common? Why, a couple of adventurers in a Leisure Travel Van, of course.

As one of Canada’s three Maritime Provinces (along with New Brunswick and Prince Edward Island), you will find the peninsula of Nova Scotia on the eastern side of Canada. It truly stands out for a multitude of reasons.

“Did you know that no place in Nova Scotia is more than 60 km from the ocean?” I asked Dave. Being both Nova Scotia-born and an “aquaholic,” he was a little surprised to learn this bit of information.

With a few days in hand, Dave and I decided to enjoy an exploratory trip of our home province on our way to Halifax, in an attempt to discover hidden gems and new-to-us areas. We would take the Glooscap Trail, a scenic roadway in the central and northern part of the province, located near the Minas Basin, Cobequid Bay, and sub-basins of the Bay of Fundy. 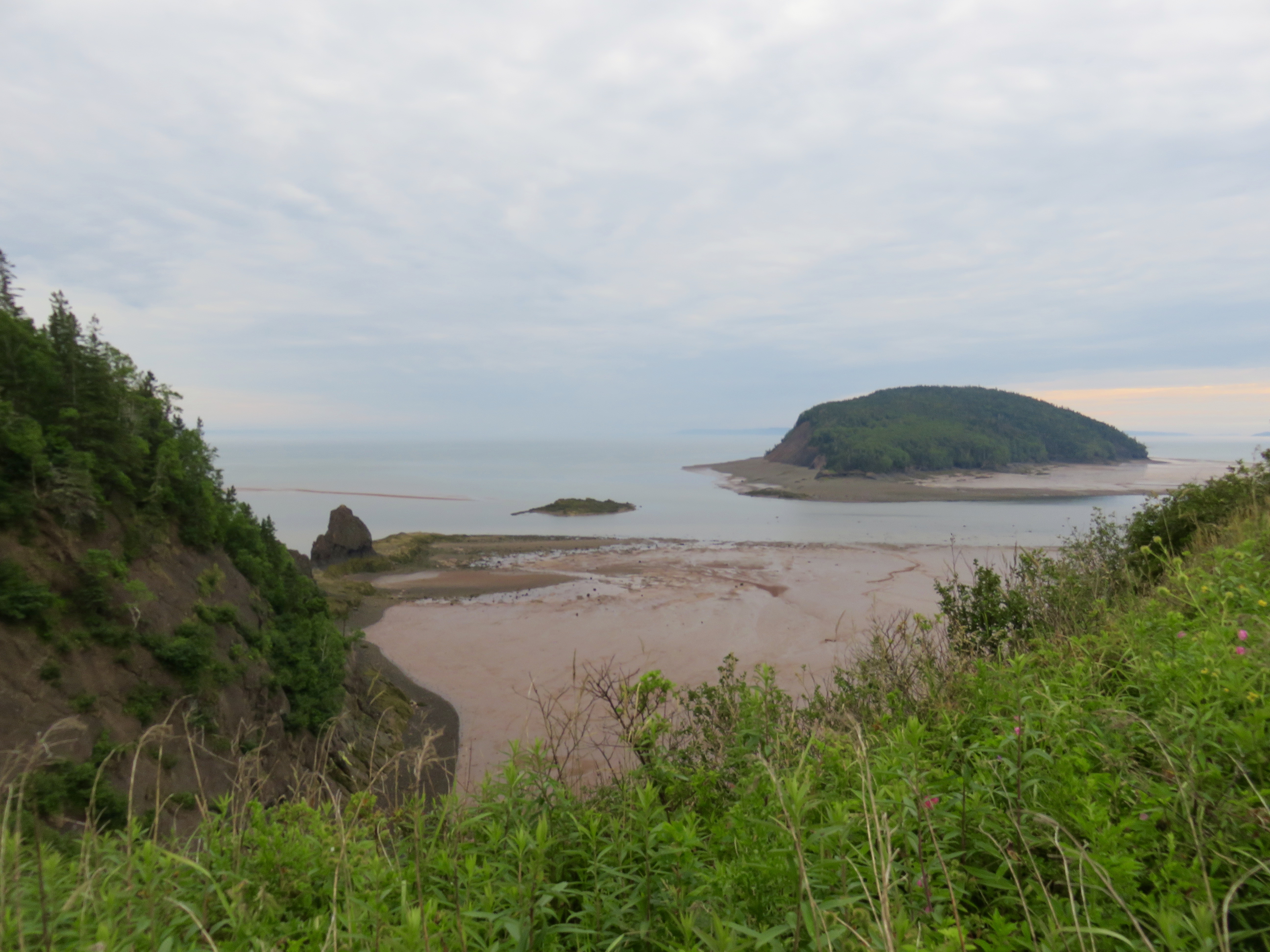 As we started out on our journey, I did more research while Dave drove.

“Did you know that the Bay of Fundy is one of the Seven Wonders of Canada?” I asked Dave.

“No I didn’t,” he replied, adding, “You’re just full of fun facts and information today!”

“It’s true. The Bay of Fundy has the highest tides on Earth and some of the rarest whales in the world, and prehistoric times left dinosaur fossils and precious minerals here,” I summarized out loud as I scrolled past the list of websites that Google spit out at me.

“I wonder what the rarest whales are?” asked Dave, as he clicked the signal lights on and checked the mirrors to see if he could pull out and pass a truck that had slowed in front of us.

“Let’s see…” I searched for the answer. “There are the humpback, minke, and finback, and there have been a few sightings of pilot, blue, and killer whales!”

Dave passed the truck, safely moved back to our own lane, and asked, “What are the other Seven Wonders of Canada?”

“Sleeping Giant and Niagara Falls in Ontario, Nahanni National Reserve in the Northwest Territories, the Northern Lights up North, The Rockies in BC, and both the Bay of Fundy and Cabot Trail here in the Maritimes,” I answered.

We soon crossed the invisible and quite nondescript border from New Brunswick into Nova Scotia and pulled off the highway, heading right towards the perfectly located Information and Rest Area. It was a good time to stop, stretch our legs, soak in the views, and inhale that salty maritime air. Once back on the Trans Canada Highway, we exited at Route 2 towards Parrsboro.

On the way is the town of Springhill, where you can explore the locations of three mining disasters that occurred in 1891, 1956, and 1958. Springhill is also the birthplace of Anne Murray and home to the Anne Murray Center. We left those places on the list of things to come back for, and continued on towards Parrsboro. Our plan was to explore Parrsboro and Five Islands, then visit Masstown Market where we would rejoin the highway.

(Note that if you miss this spectacular area on the way into Nova Scotia from New Brunswick, you can always reverse the trail we took when you leave Nova Scotia – the area is well worth whatever time you wish to give it. Depending on your timeframe, a side-trip east of Parrsboro will lead you to Advocate Harbour, the lighthouse on Cape d’Or, and Cape Chignecto Provincial Park.)

Mi’kmaq heritage and the legend of Glooscap

Signs for Amherst/Glooscap Trail soon appeared, and it was time to veer off. Many areas in the Atlantic Provinces have Mi’kmaq origins, and the area reflects the history and culture of the First Nations people who lived here long before European colonists arrived.

Amherst was originally known as Nemcheboogwek, the Mi’kmaq word meaning “going up rising ground.” We were taking the scenic drive south towards what was originally Awokun, which means “a portage” and is now better known to us as Parrsboro.

The Mi’kmaq believed that all the universe was filled with mntu (or manitou), the name for Spirit. Living high on the cliffs of Cape Blomidon, overlooking the Bay of Fundy, the Great Spirit Creator, Gisoolg, shot a lighting bolt down on the reddish sands, creating a god-like giant man, and named him Glooscap, an Abenkai word that means “man from nothing.” 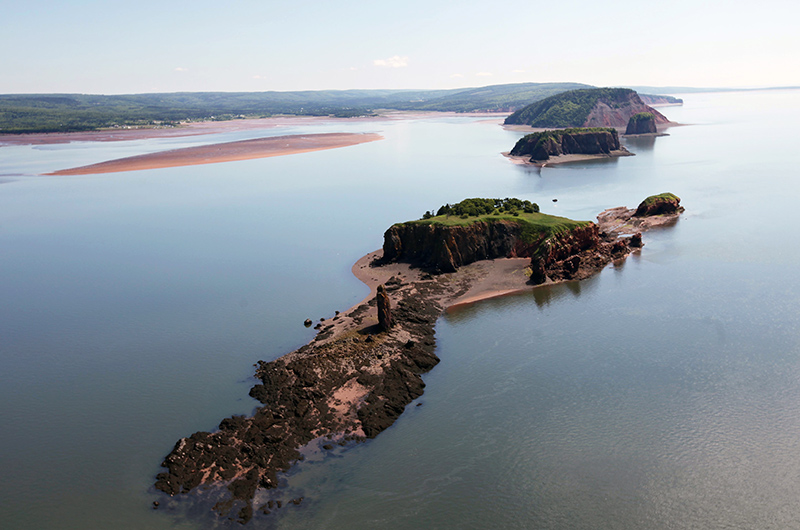 Glooscap made his home in the Minas Basin, and legend tells that when he slept, Nova Scotia was his bed and Prince Edward Island was his pillow. He lived here, admiring the beauty of the lands, until one day he found his medicine garden destroyed. The culprit? A Canadian beaver! Glooscap was understandably upset, and threw giant clods of mud at the mischievous and disrespectful beaver. The dam was smashed, and water began to flow freely. The mud, sticks, and stones created five islands that emerged in the rapidly rising tides. As for the beaver? He was trapped on one of the islands, and turned into gold.

The local Mi’kmaq legend sure makes for a fascinating story. But how does today’s reality compare?

Driving Route 2 in our Leisure Travel Van was a pleasure; the winding country roads were easy to navigate, and the pastoral lands and scenic views were pretty as we made our way towards Parrsboro. Once there we found a Tim Horton’s, an Irving gas station (yes, they have approved diesel!), a grocery store, and a waterfront restaurant down Pier Road appropriately called Harbour View. Time for lunch? Yes, please! 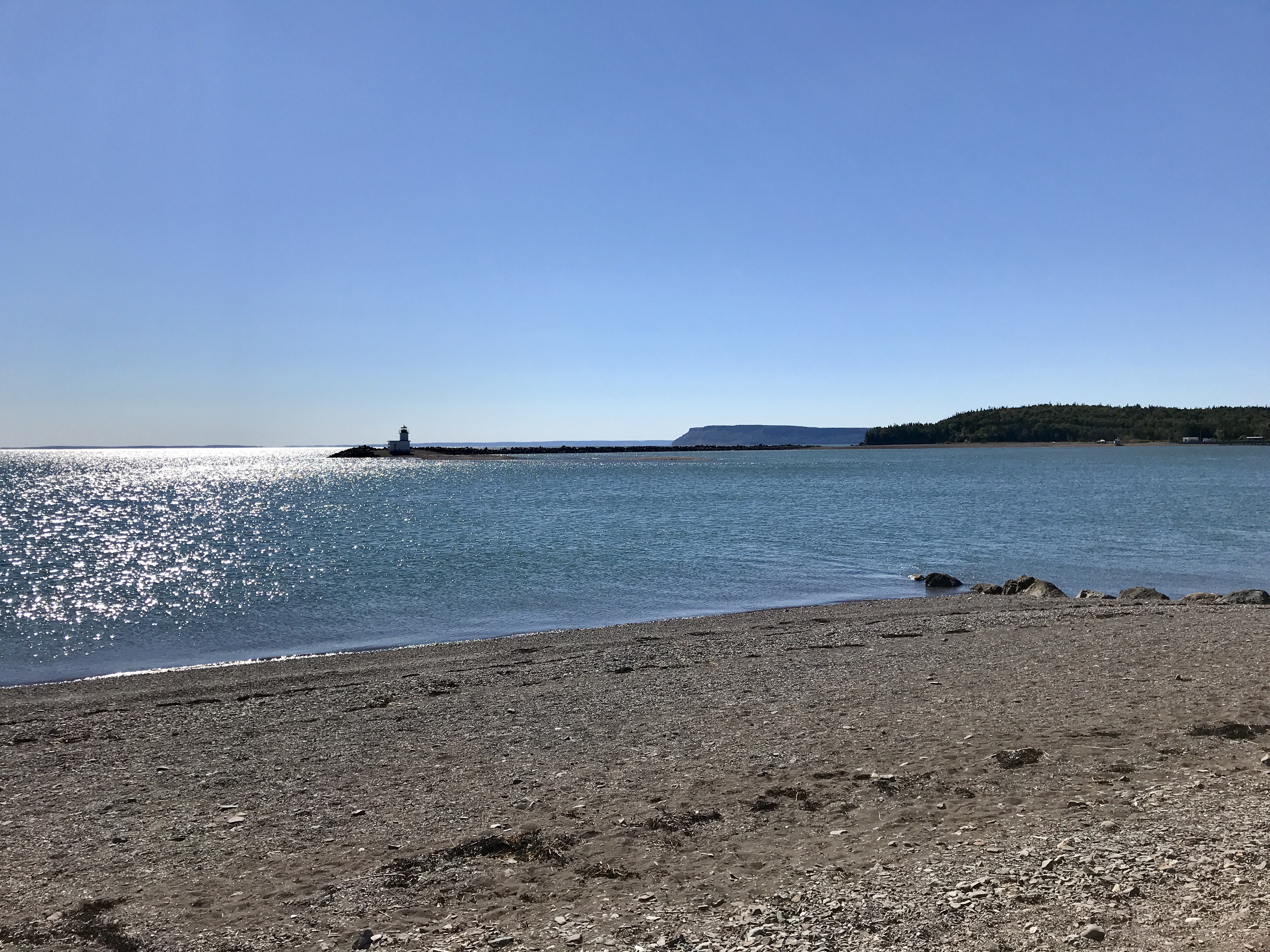 The view at Harbour View. 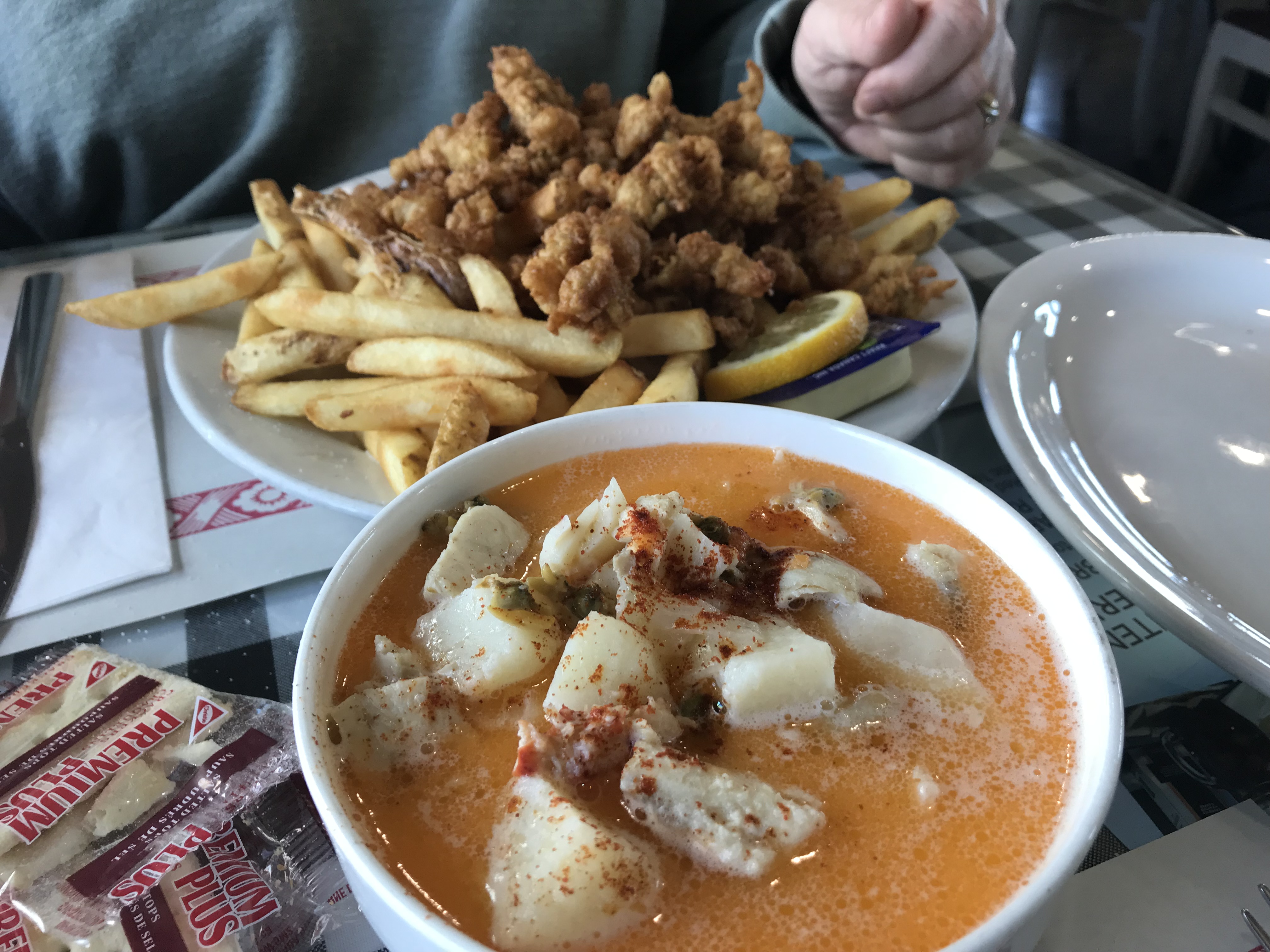 Clams and chips and a bowl of chowder – to be shared, of course.

We enjoyed some of the best clams and chips we’ve ever had, and the chowder was delicious too. Had we known there were homemade desserts on offer, we wouldn’t have eaten so much! A little walk to enjoy the scenery was in order, which gave us just enough room to indulge in some ice cream as we headed back into the core of this quaint town. There’s lots to see and do here, and you can easily spend some time meandering about. 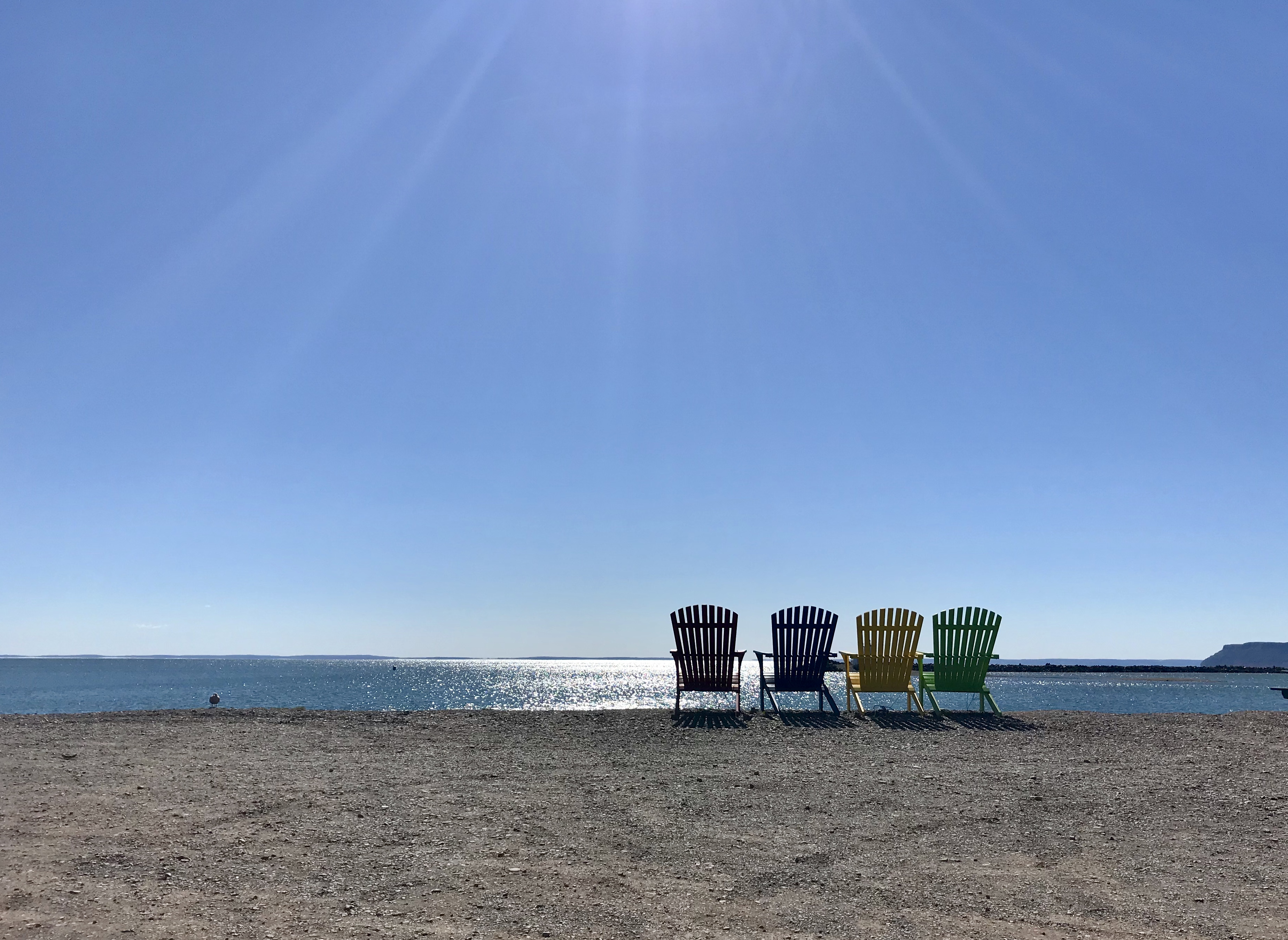 For some history, visit the beautifully-located Ottawa by the Sea Museum. Something to entice you in the evening? Take in a show at the local theatre. This is a place where dinosaurs once roamed; learn more by visiting FORCE (the Fundy Ocean Research Center) or Fundy Geological Museum.

Approximately 25 kms east of Parrsboro, you’ll find the majestic Five Islands: Moose, Diamond, Long, Egg, and Pinnacle. The whole area is made up volcanic rock that accumulated 200 million years ago in the Fundy Basin, a depression in the earth’s crust. 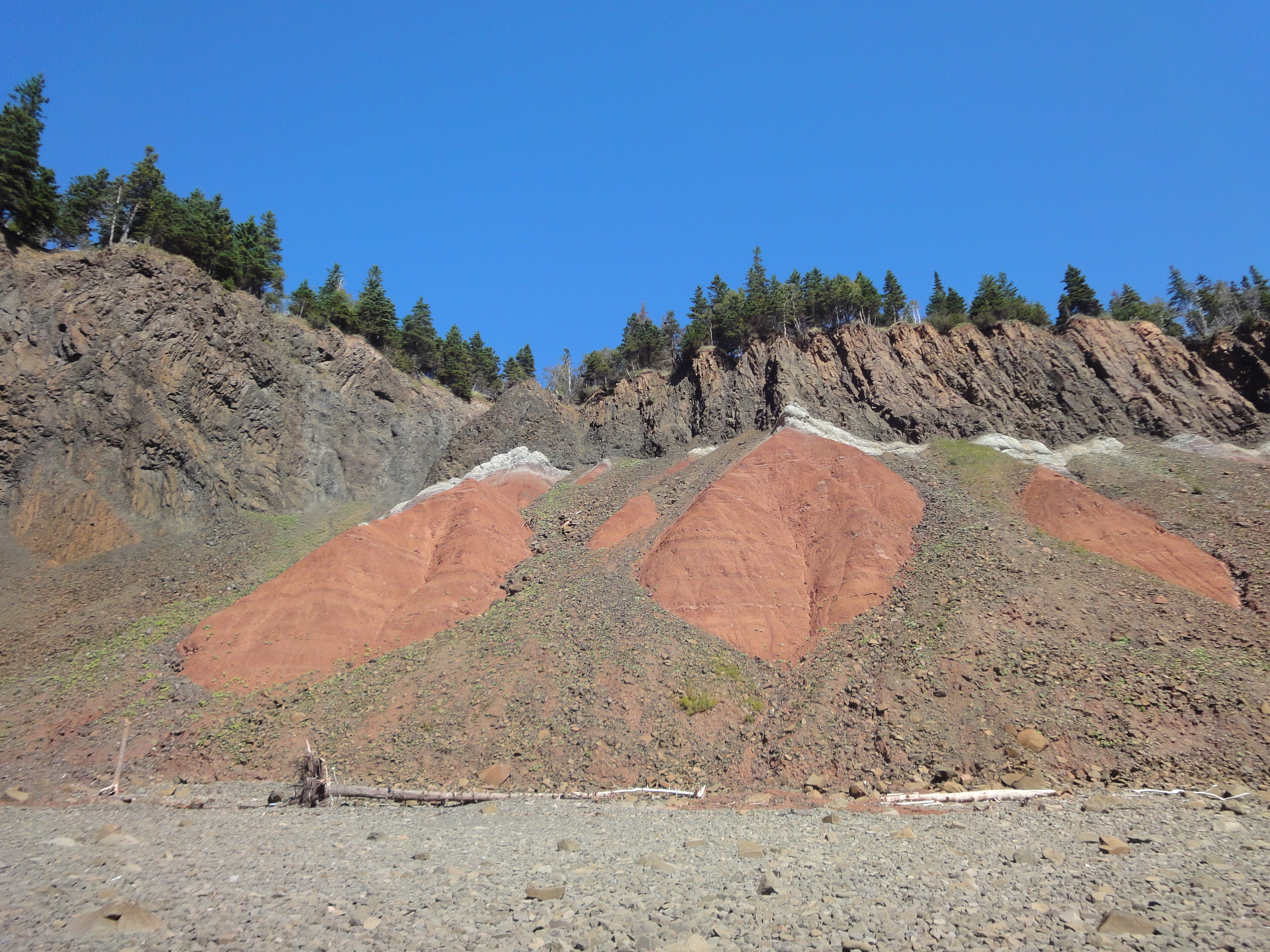 As part of the Bay of Fundy, this area is home to the highest tides in the world, and as such, a word of caution regarding whatever beach activities you might want to do here is needed. Over 160 billion litres of water flows in and out of the Bay of Fundy, and it is important to note the tide times. At low tide, the mud flats go on for miles and are oh-so-impressive, but the tide rises quickly and you could get stranded! 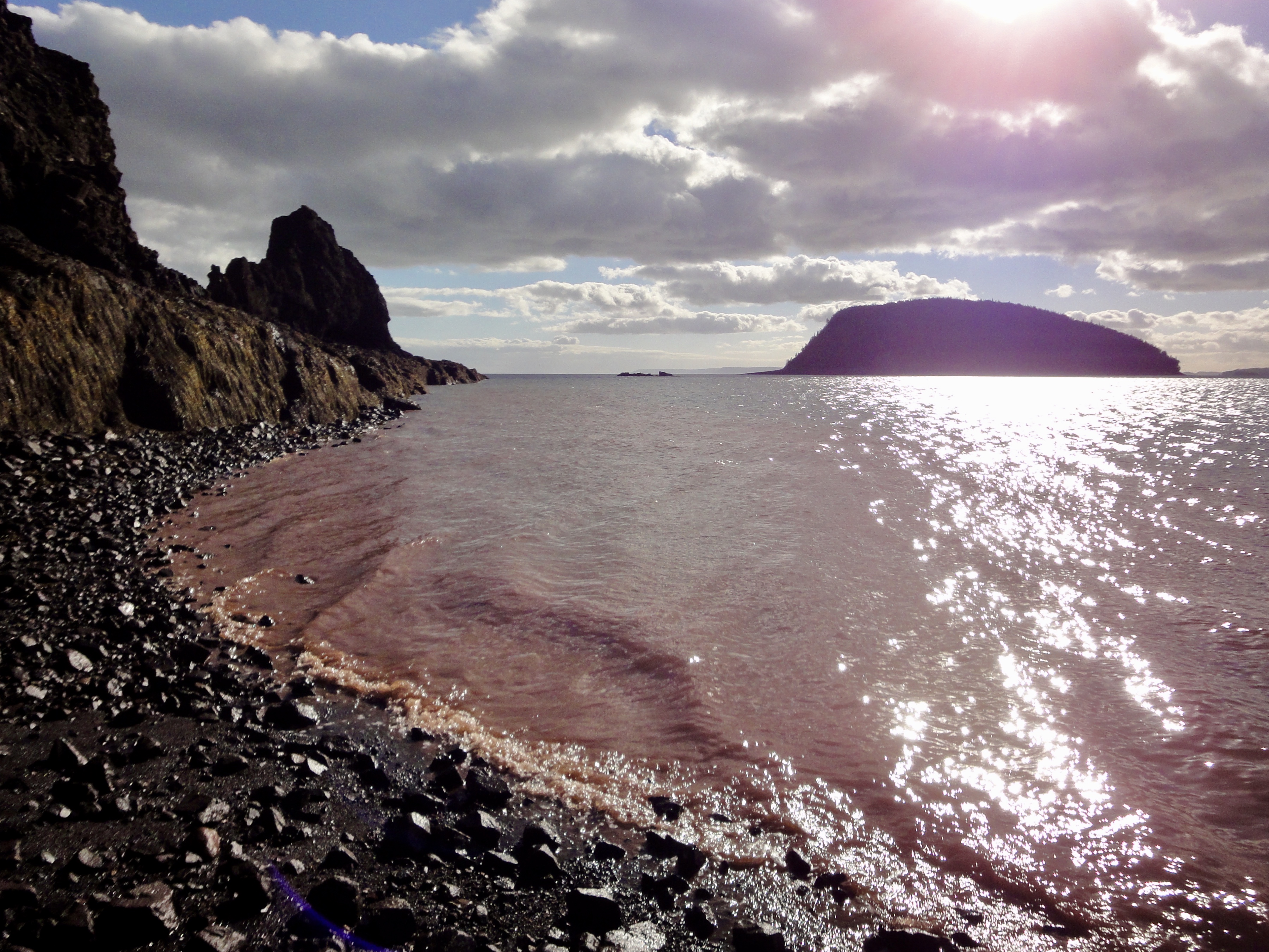 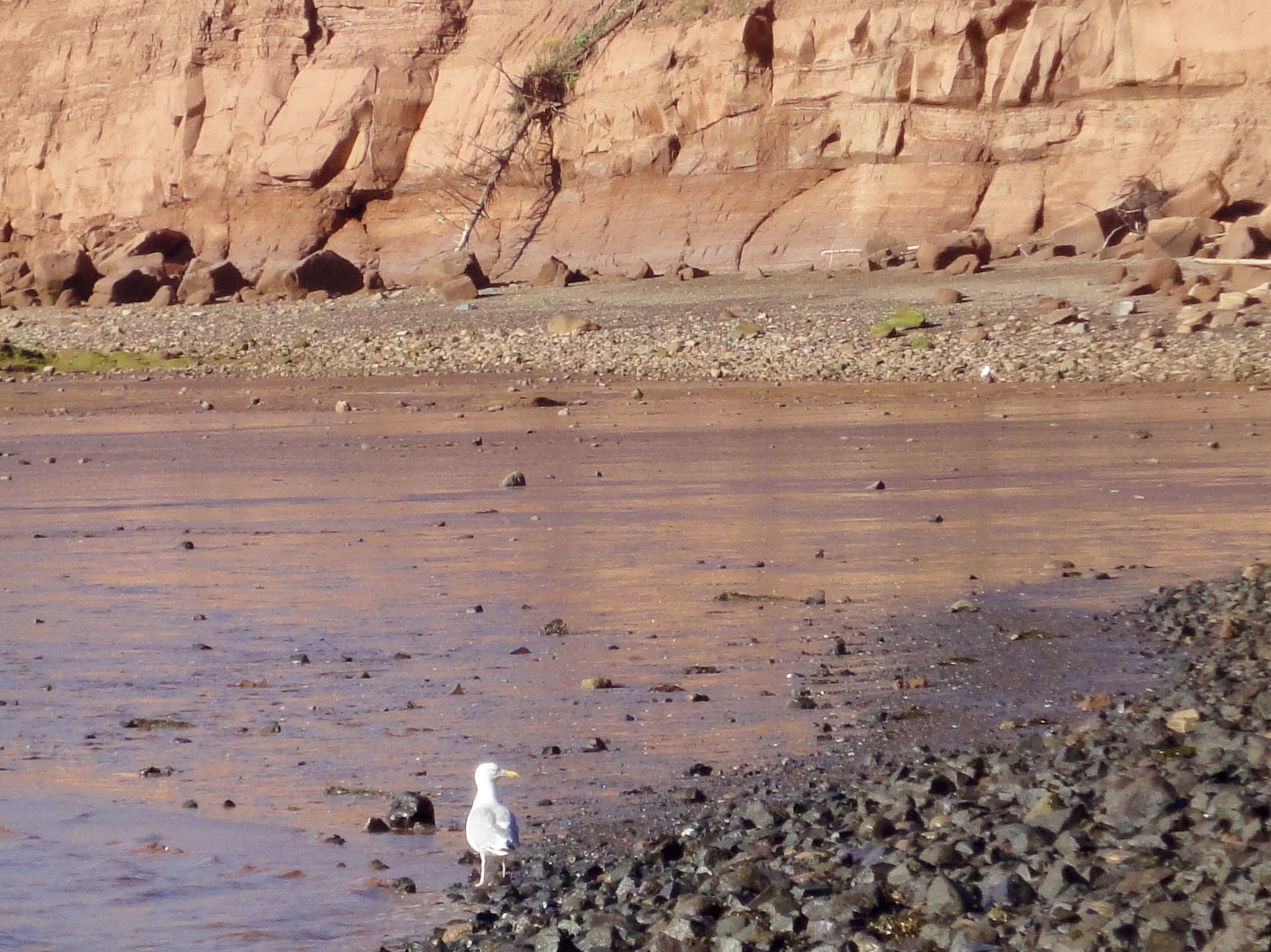 Be aware of the tides when you’re out and about, perhaps hunting for fossils or dinosaur footprints, rock collecting or clam digging, spotting sea creatures, or just staring at the impressive 300-foot sea cliffs. Clambering around and maybe even over boulders that are bigger than you are will make you instantly feel quite small in the grand scheme of nature.

Camping in the Fundy Basin area

There are three camping areas to choose from: Five Islands Ocean Resort, Diamond Shores Campground, and, nestled further inland, Five Islands Provincial Park, which is where we chose to park and play. It didn’t take us long to get set up in our very comfortable Unity IB, and then it was time to explore hiking trails and take in the vistas. 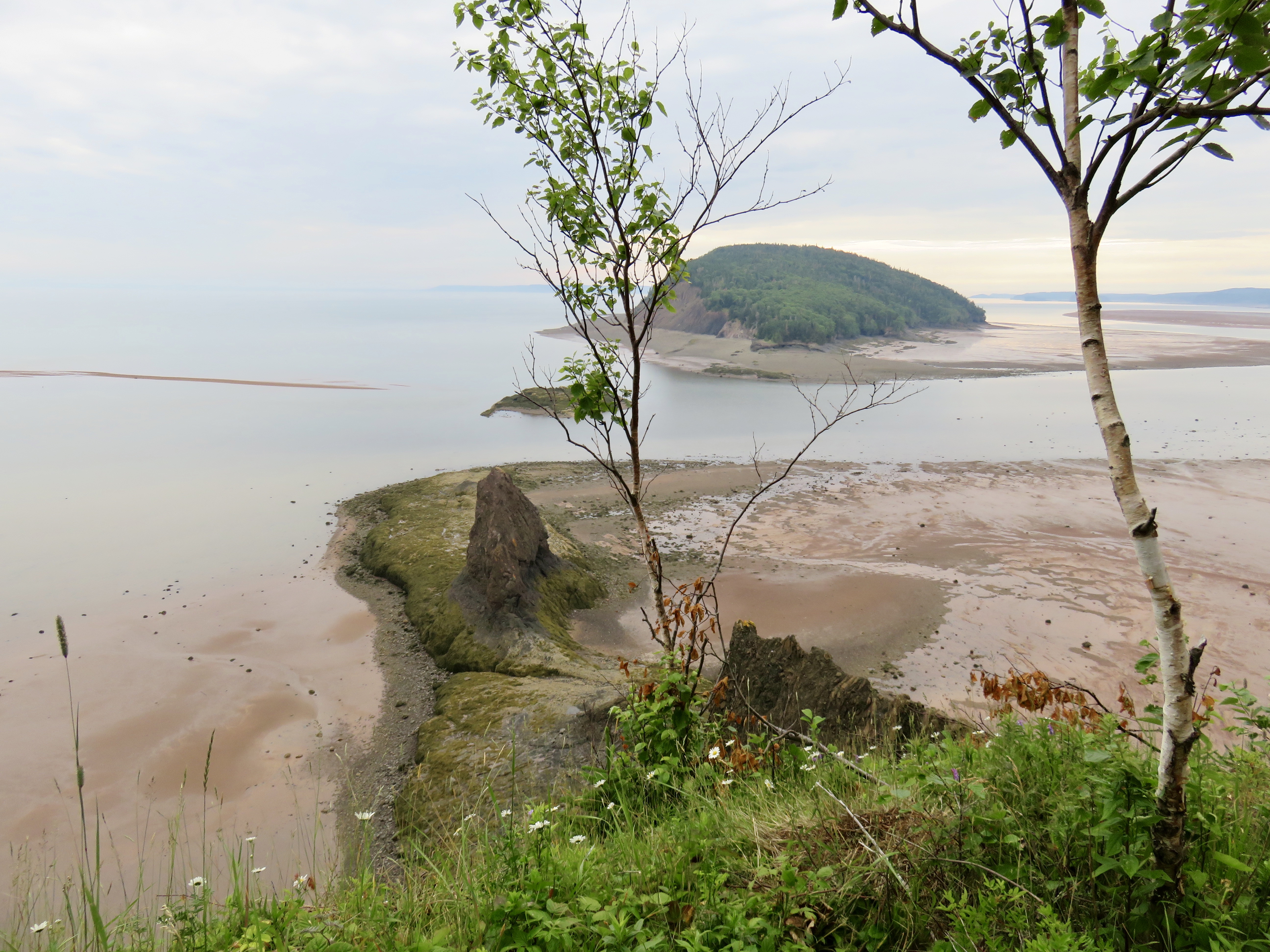 After supper we walked through the park, and in true maritime fashion, got invited for a clam boil at a neighbouring campsite. Us maritimers are a friendly bunch – get used to everyone smiling and saying hello as you cross paths. It would be rude not to!

When it was time to leave Five Islands, we continued on Route 2 toward Masstown, stopping along the way at That Dutchman’s Cheese Farm for some Dragon’s Breath cheese. We recommend trying this and sampling a few others… they are delicious!

At the end of this highway we reached Masstown Market, a place to replenish our cabinets and fridge with great local fruits and vegetables, fresh from nearby gardens. If you arrive first thing in the morning, you might be lucky enough to nab some freshly made doughnuts at the bakery! Stock a picnic basket with some fresh bread, salads, cheeses, and meats from their delicatessen, or browse the boutique of gifts and other items while sipping on a freshly brewed coffee.

Next door is the Lighthouse and Catch of the Bay Fresh Fish Market, where we bought some crab dip and seaweed salad (yes, you need to try it)! Consider putting the Atlantic Seafood Pie on your list as well. Right next door is the grounded SV Knot on the Bay, now a Fish and Chip Boat where the smells will definitely cause your stomach to rumble in anticipation. During the peak of tourist season, if the crowds are large (which they can be when a busload of visitors arrives) consider pre-ordering. You’ll get a buzzer that you can walk around with while they make your meal. We ordered clams and chips and one piece of fish to share, and we still had leftovers! We were certainly grateful that we’d been hiking about for the previous few days!

Although we never found any treasures made of gold, we will treasure the time spent touring about this area. What we saw and experienced will forever remain as memories – the best treasures of all. We highly recommend that you make this area one of the stops on your Nova Scotia bucket list. Why not look for maritime treasures at Five Islands yourself?