In the luxurious comfort of our Leisure Travel Van Unity IB, we are driving on the roads in the Great Plains Region of North America, in the somewhat mountainous region that is the Western United States and, more specifically, the state of Wyoming.

To the north lies Montana, to the east South Dakota and Nebraska, Colorado to the south, and Idaho to the west. The Black Hills are found here, but the hills are not actually black – they were named this way because they were covered in trees and appeared dark when looking at them from far away, say from the Belle Fourche River Valley. 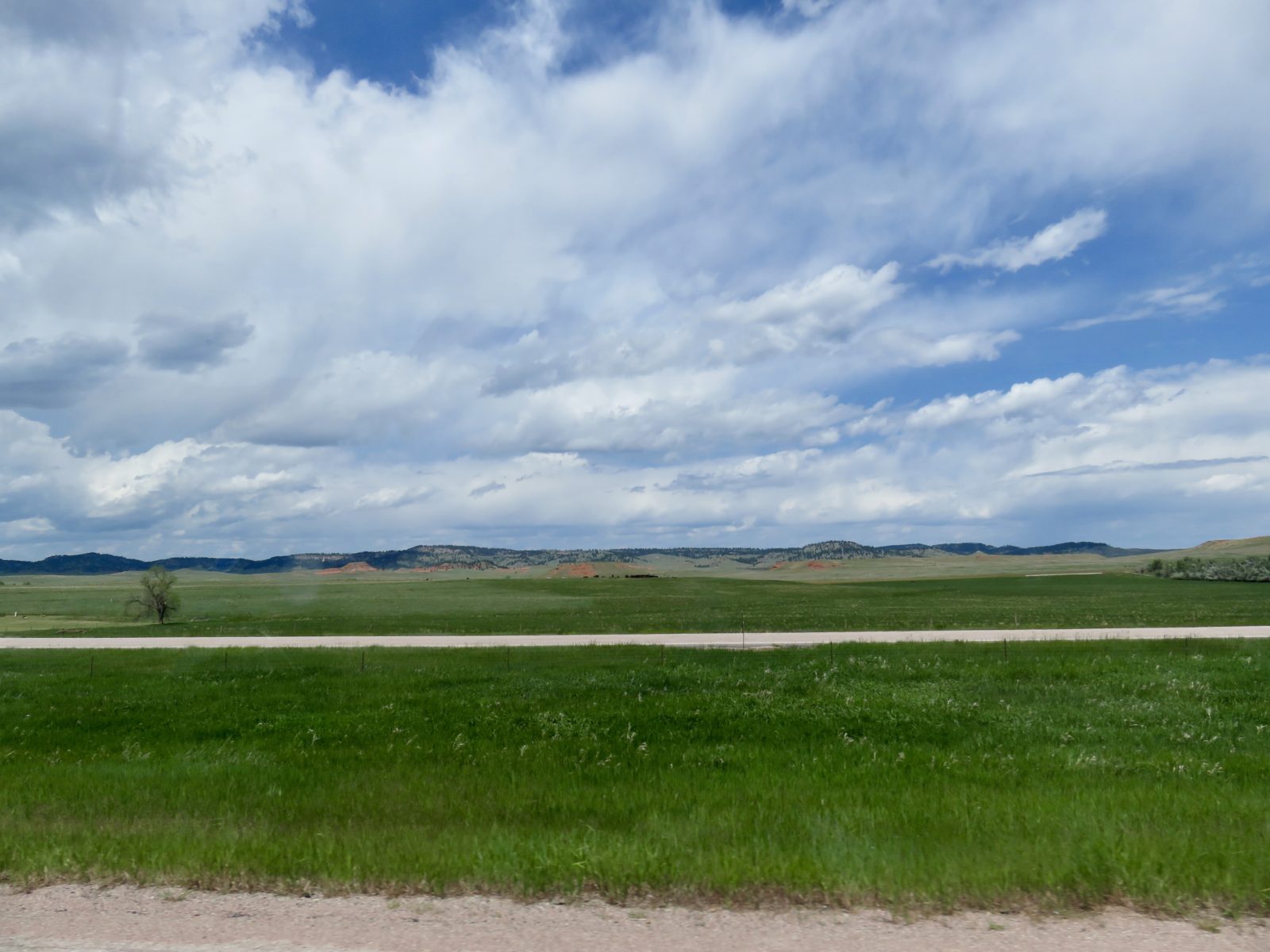 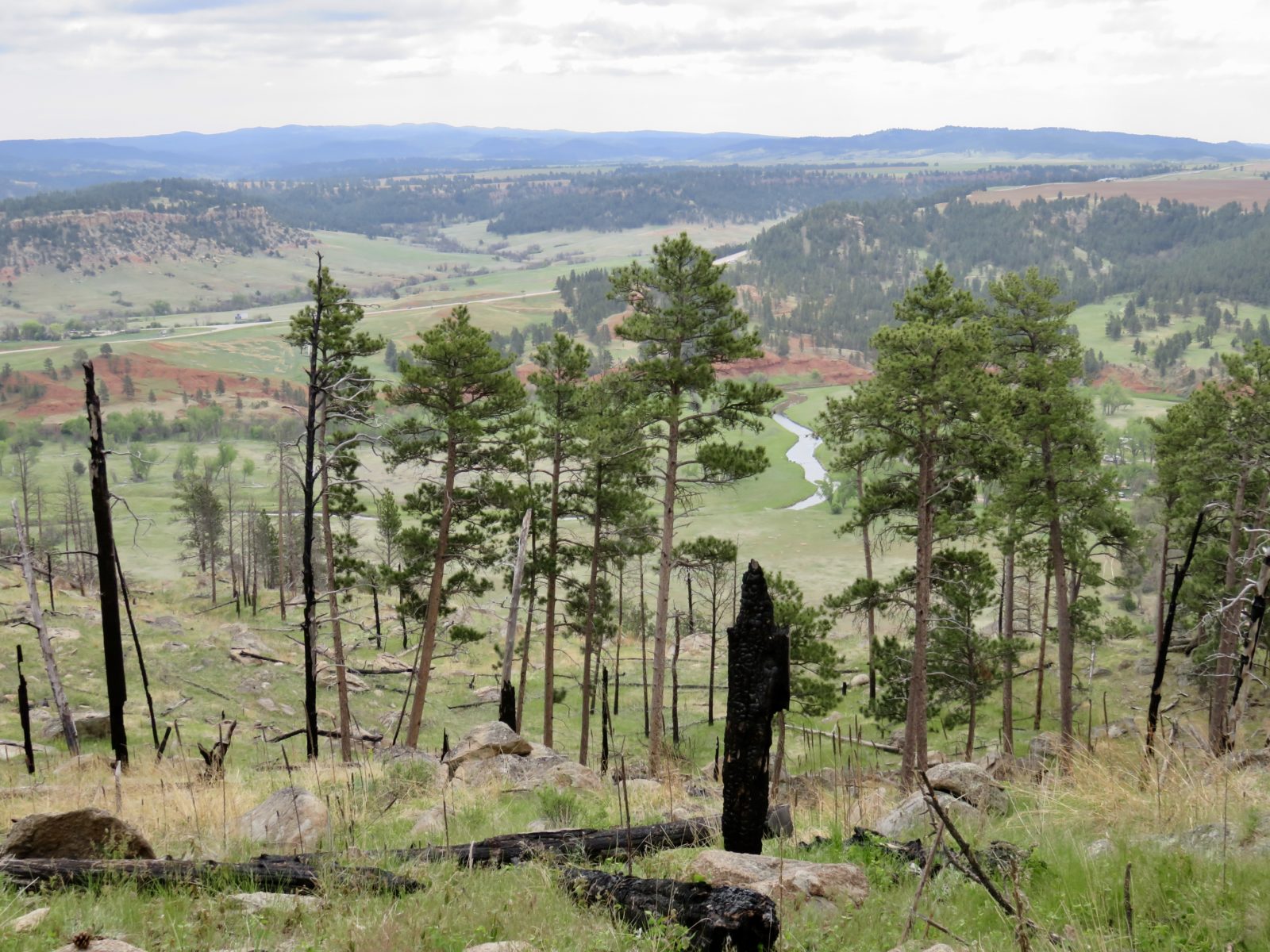 Belle Fourche, which translated from French means “beautiful fork,” is where the river can be seen running through the valley. In the midst of this beautiful area rises towards the skies, surprisingly and quite majestically, one solitary and very tall grey butte. (“Butte” comes from the French word meaning “small hill” and is defined as an isolated hill with a large flat top and steep vertical sides.)

The butte at Belle Fourche has vertical sides that rise 867 feet from the base to the summit – 1,267 feet above the river, and 5,112 feet above sea level. Imagine about four football fields, vertically stacked one after the other, to get all the way to the top. 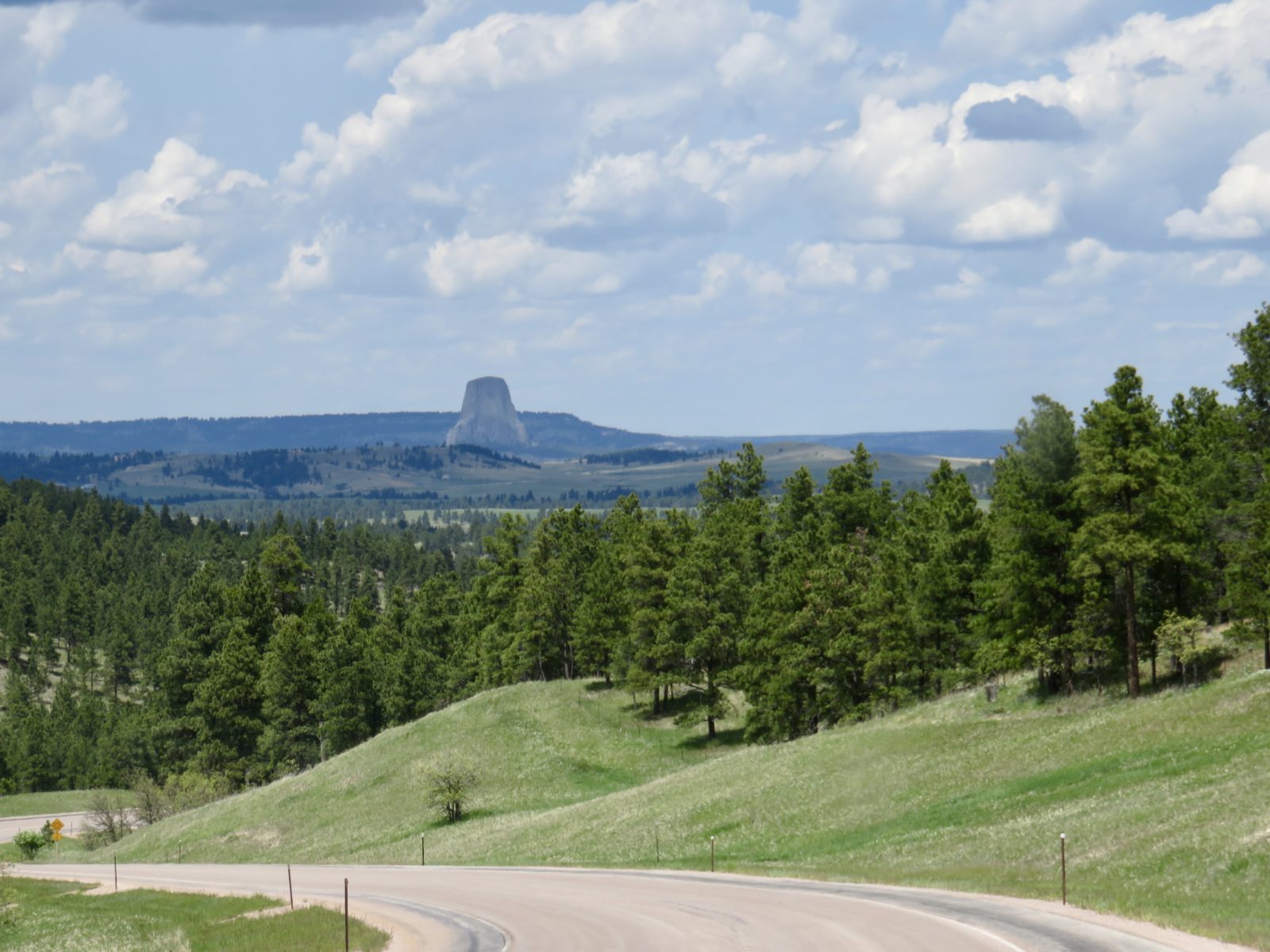 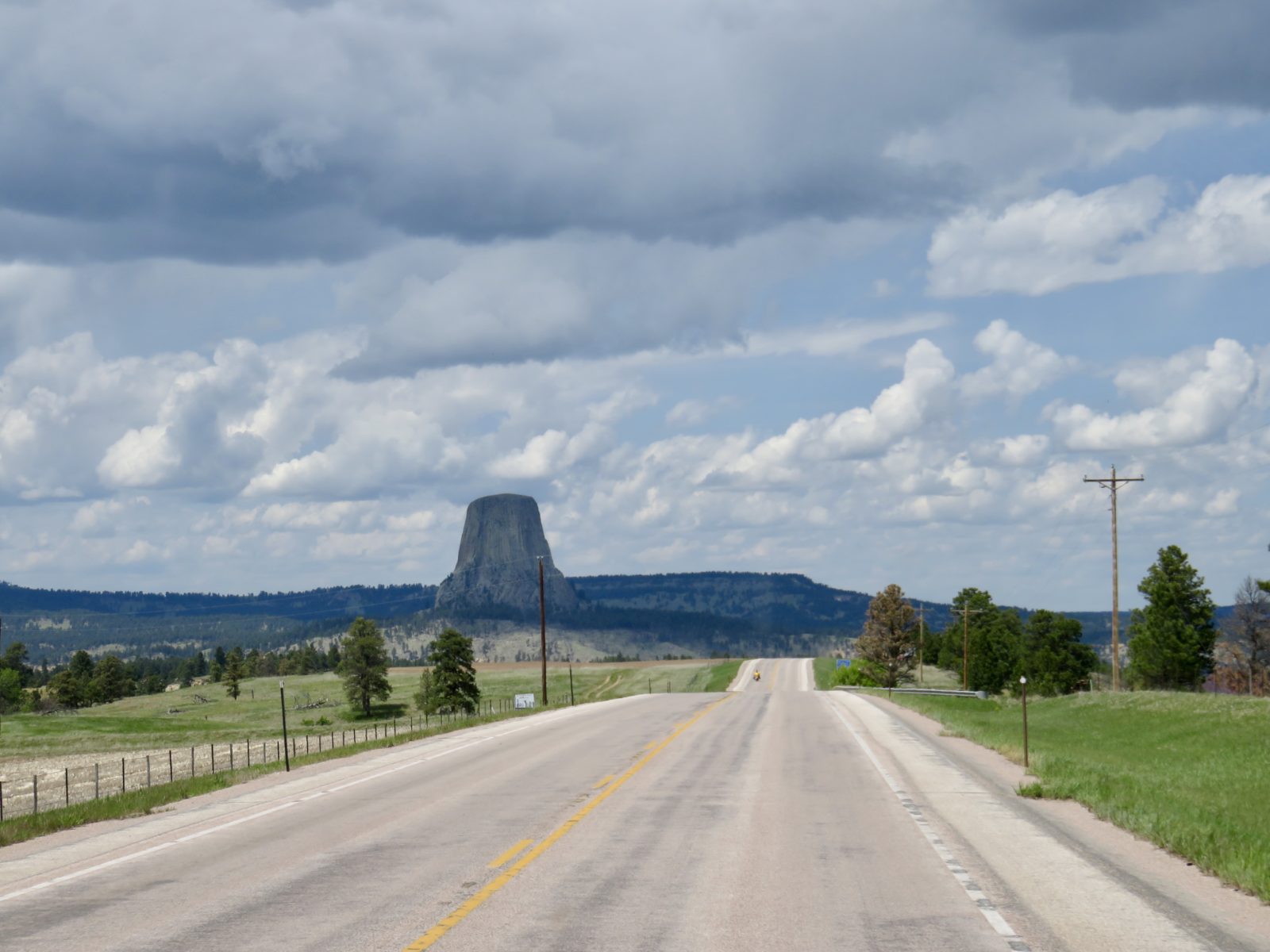 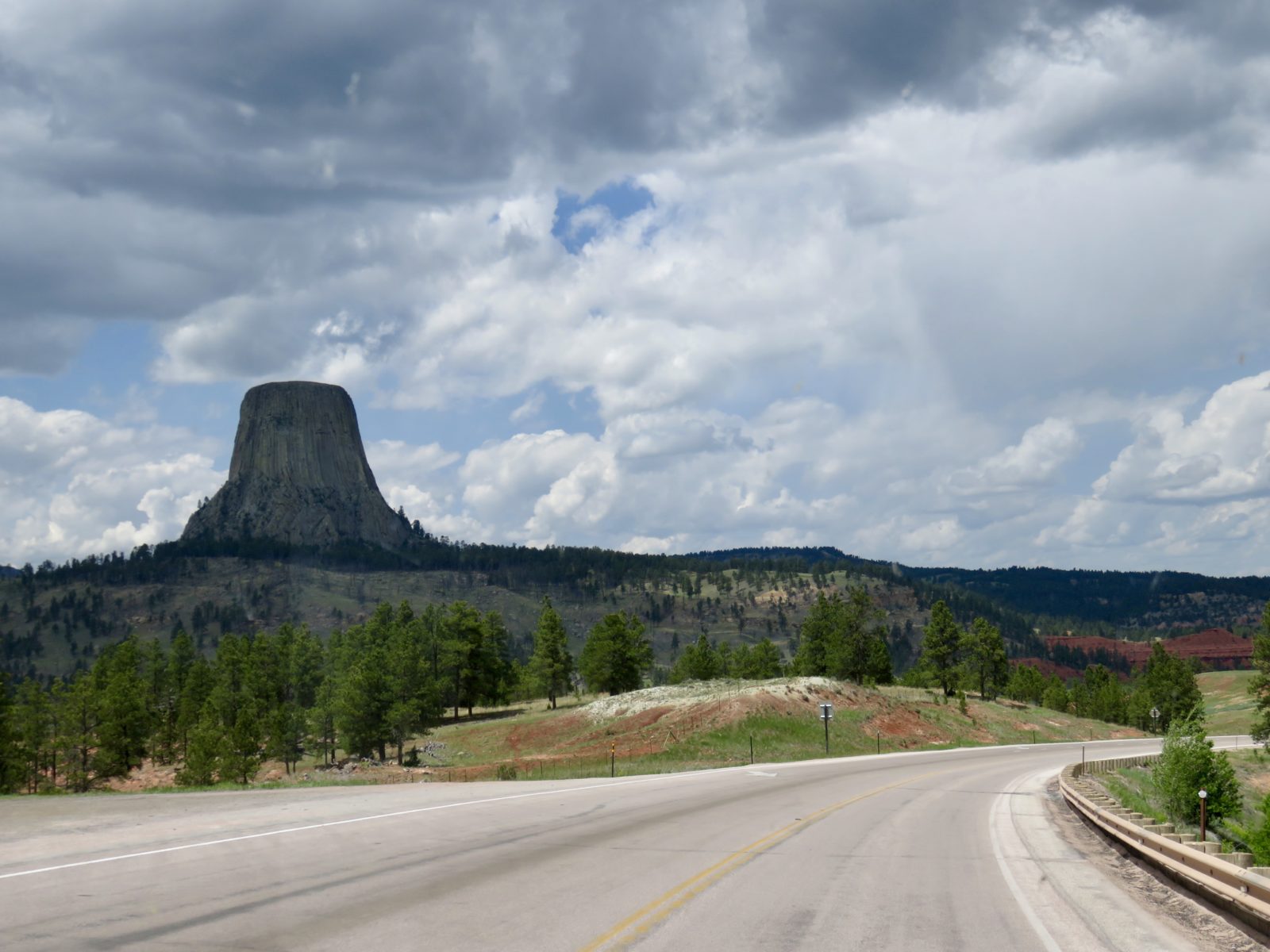 The top of the butte appears very flat and is about 180 feet by 300 feet in size (about the size of one football field). Grasses, cacti, and shrubs grow abundantly, and this area is (surprisingly) home to some (very brave) chipmunks, snakes, and woodrats.

As our drive got us nearer to this skyscraper-type of structure, it looked like a “bunch of pencils held together” (as described by the NPS rangers), but it’s more accurately an example of columnar jointing – a structure of joined columns. Most are hexagonal (6-sided), but 4, 5, and 7-sided columns also exist. 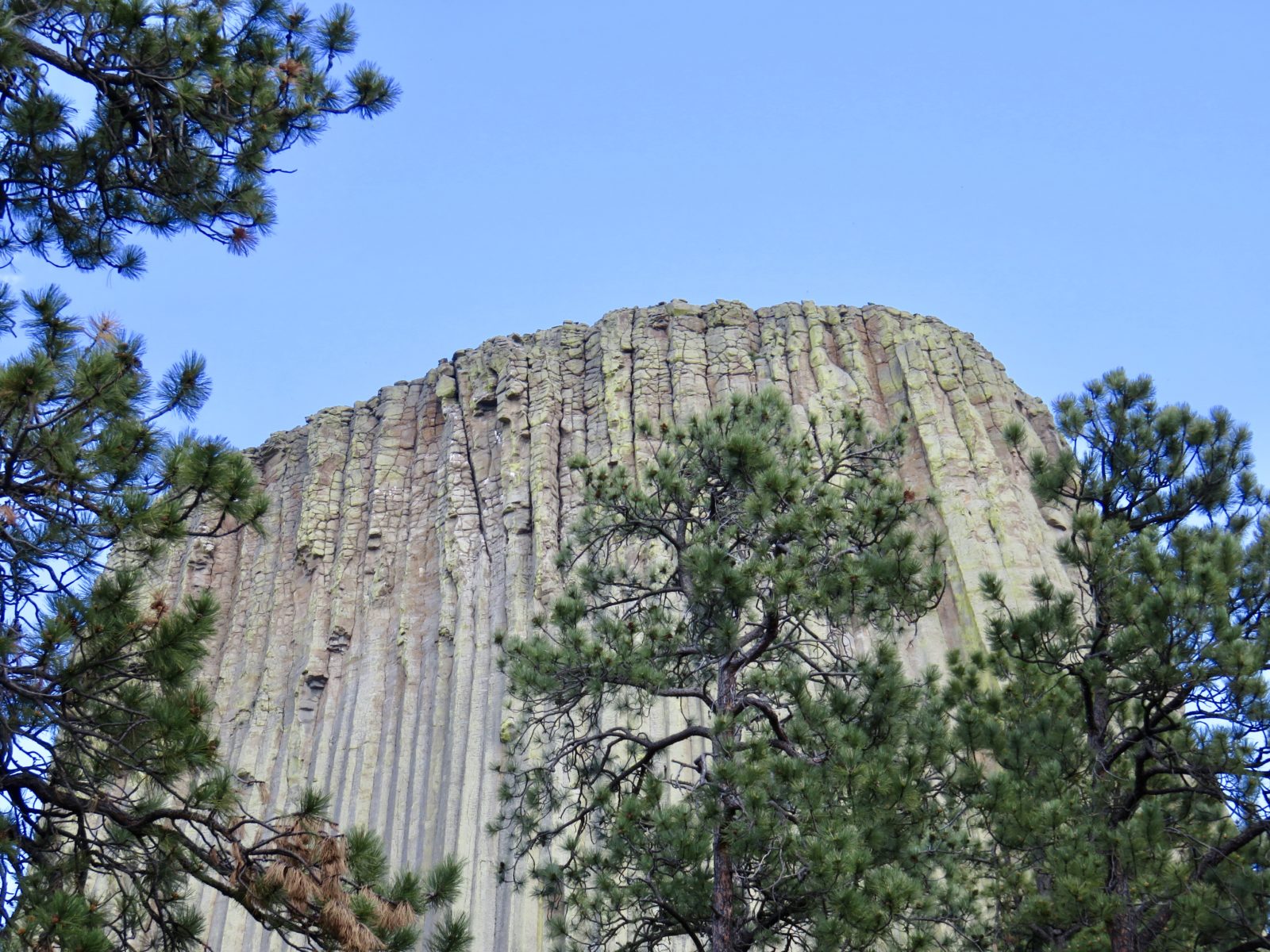 This butte is not hollow, and it’s not made of mashed potatoes. Mashed potatoes is what the main character, played by Richard Dreyfuss, in Steven Spielberg’s movie Close Encounters of the Third Kind uses to recreate what he’s been seeing in his mind’s eye.

His mind’s eye has seen a lone mountain of the UFO kind, but in the here-and-now of today’s terra firma reality, geologists agree that this monolith is made of igneous rock. The igneous rock formed underground from magma (molten rock) that pushed up into sedimentary rock, a process well over 50 million years in the making. Making it took time, and with the seasons it cooled and hardened. The elements have eroded much of it away, and today, we stand and stare, quite gobsmacked, at the uniqueness of its core. 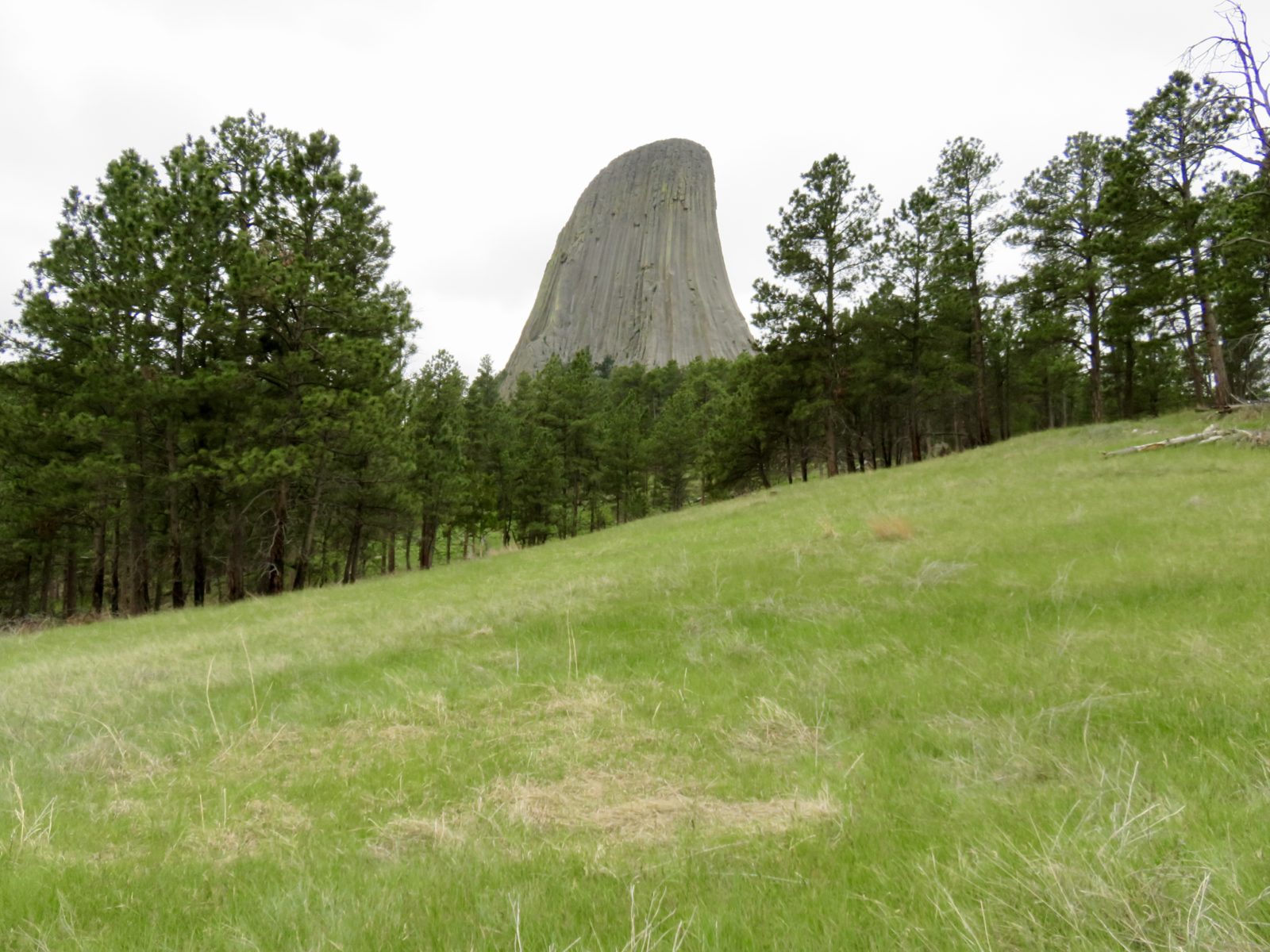 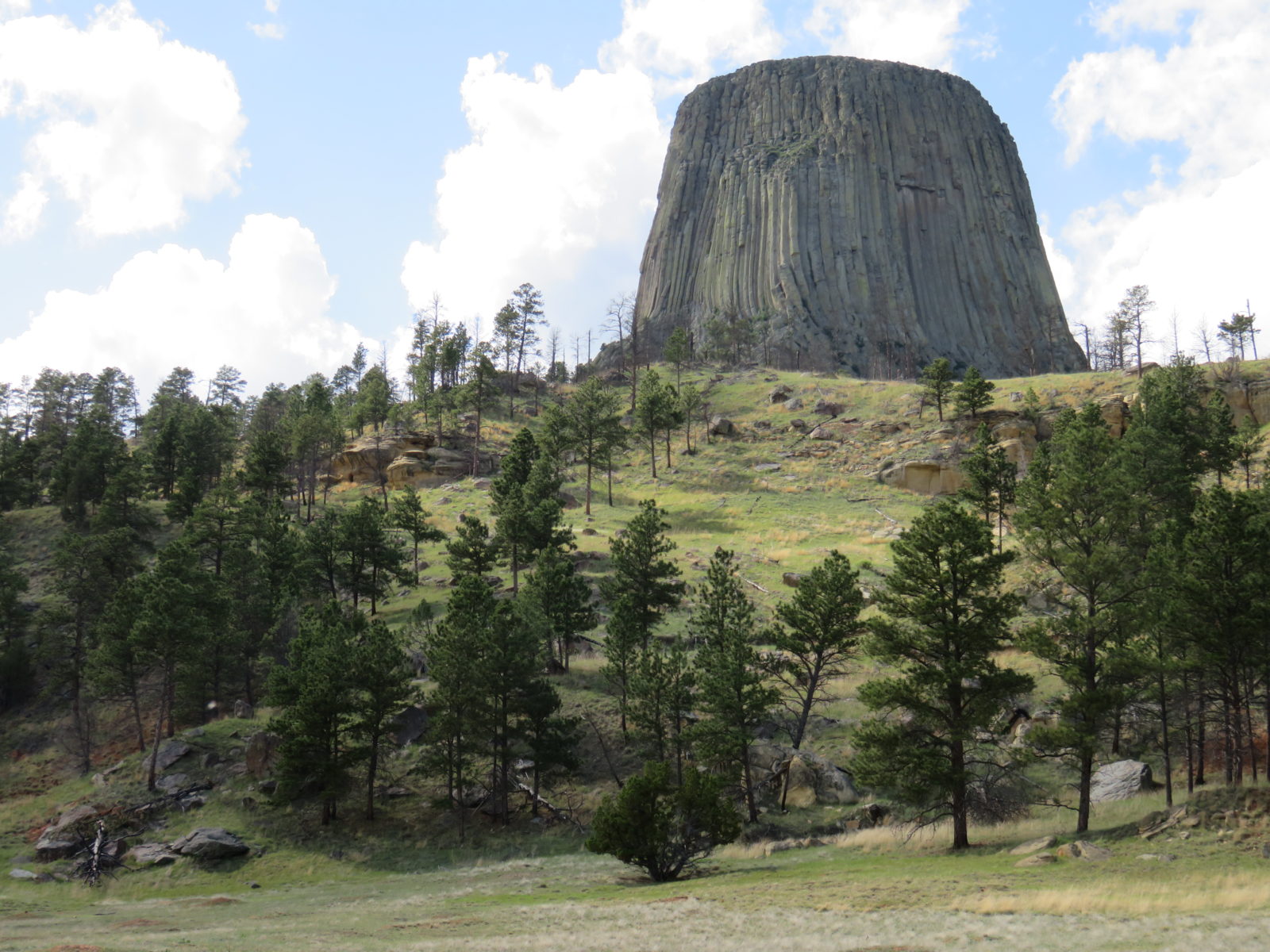 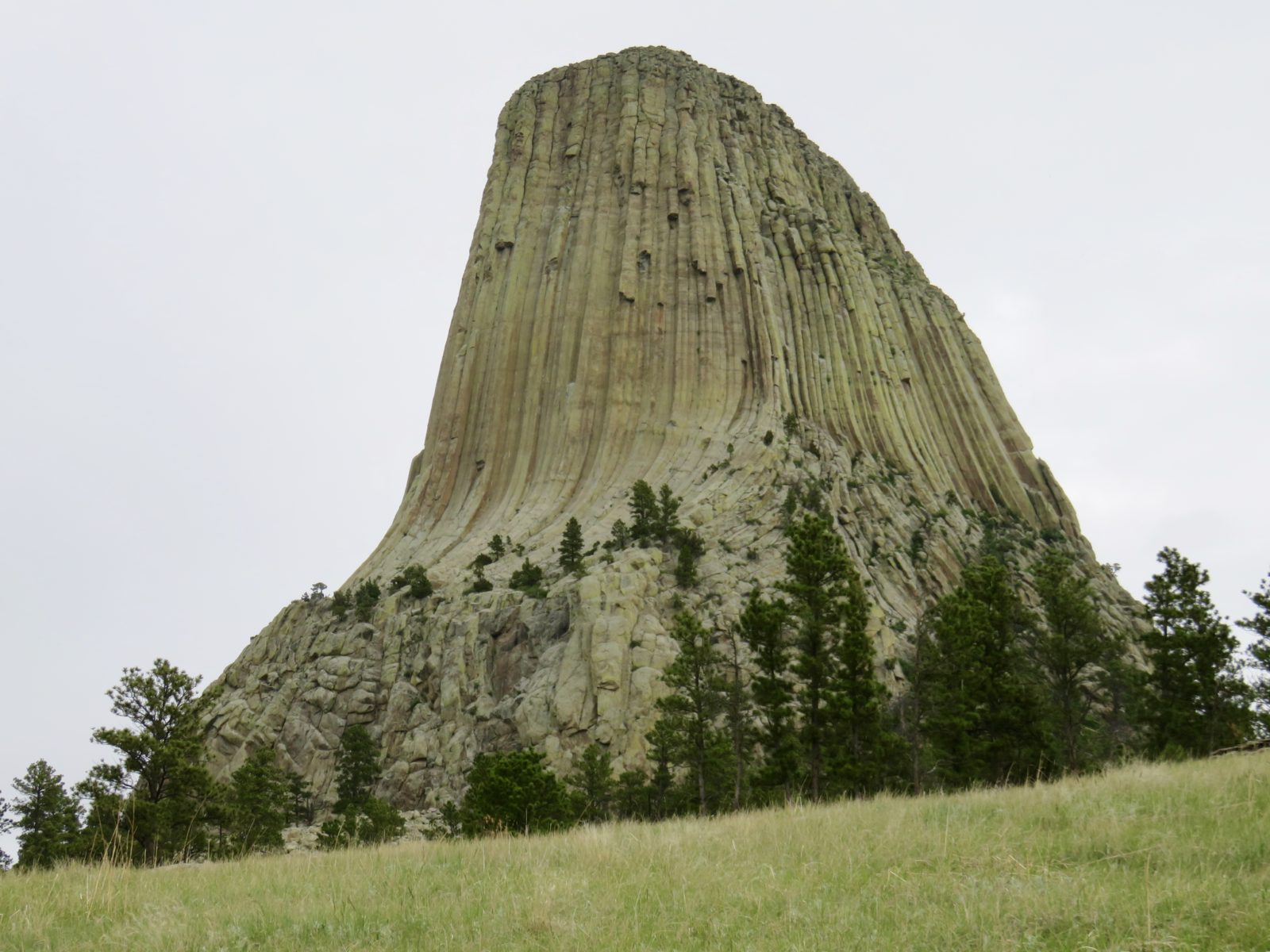 Stories and legends from the Northern Plains Indian tribes surrounding the butte are many and varied, yet all speak a similar tale – a tale that always includes a bear. In one legend, 7 children are chased by a bear. They end up on a rock that magically starts to rise into the sky, saving them from the bear’s reach. The bear tries to climb the rock but cannot, and his claws leave grooves. His claws eventually break and the children are safe.

In another, 6 Sioux girls picking flowers in the forest are chased by a bear. To save their lives, the Great Spirit lifts the ground underneath the girls. The children remain safe as the bear attempts to climb the rock, but again cannot. The only evidence left behind is long, jagged scratch marks. 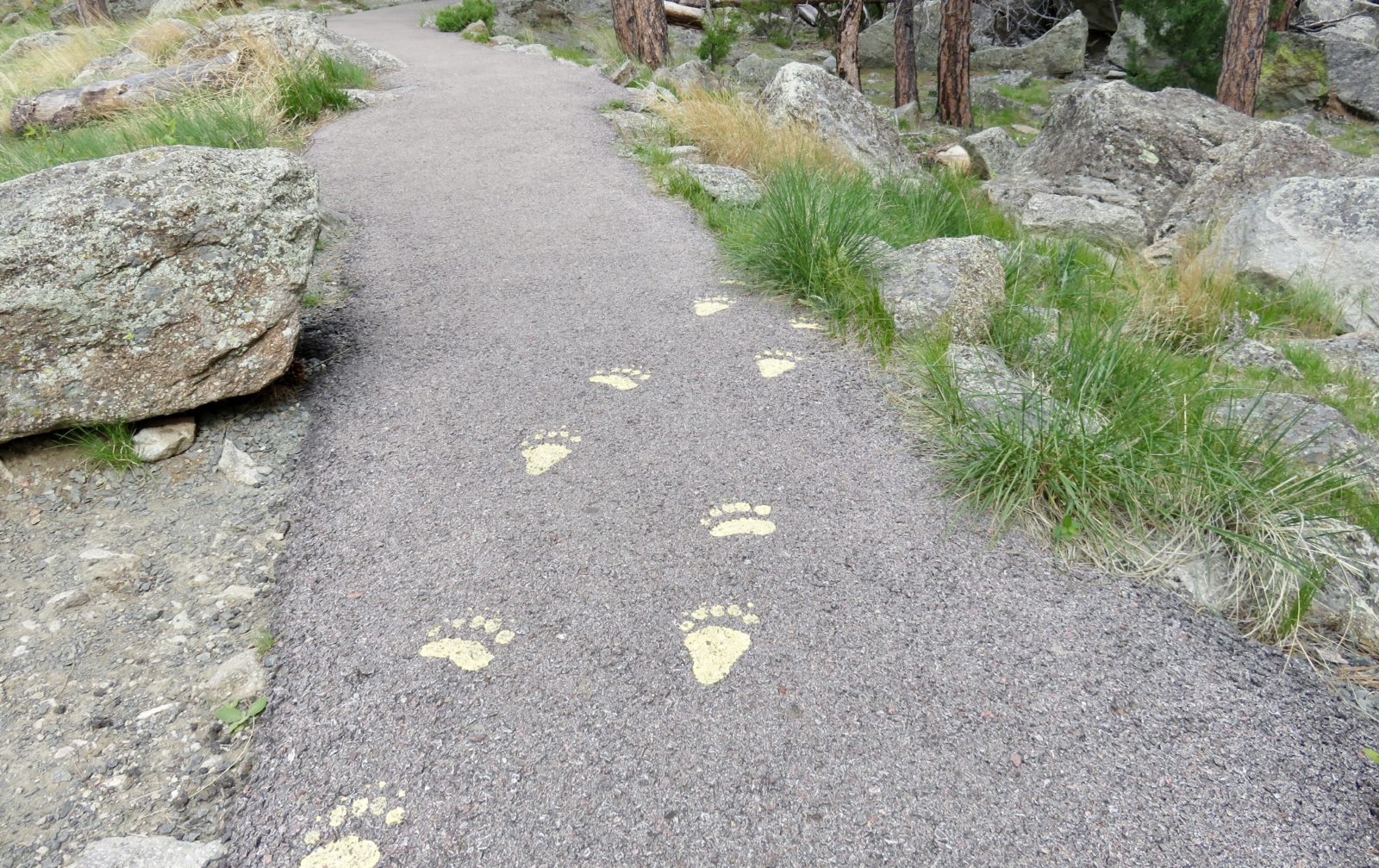 Scratch marks are exactly what the deep, long grooves look like as we stare at this rock that the Arapahoe called Bear’s Tipi, the Kiowa referred to as Aloft on a Rock, the Lakota people know as Bear Lodge or Bear Lodge Butte, and the Sioux call Mateo Tepee or Bear Lodge. In 1875, Colonel Richard Irving Doge led an expedition here, and his interpreter reportedly misinterpreted a native word to mean Bad God’s Tower or Devil’s Tower. Later, a clerical error removed the apostrophe. This error was never corrected, and today we know the butte as The Devils Tower. 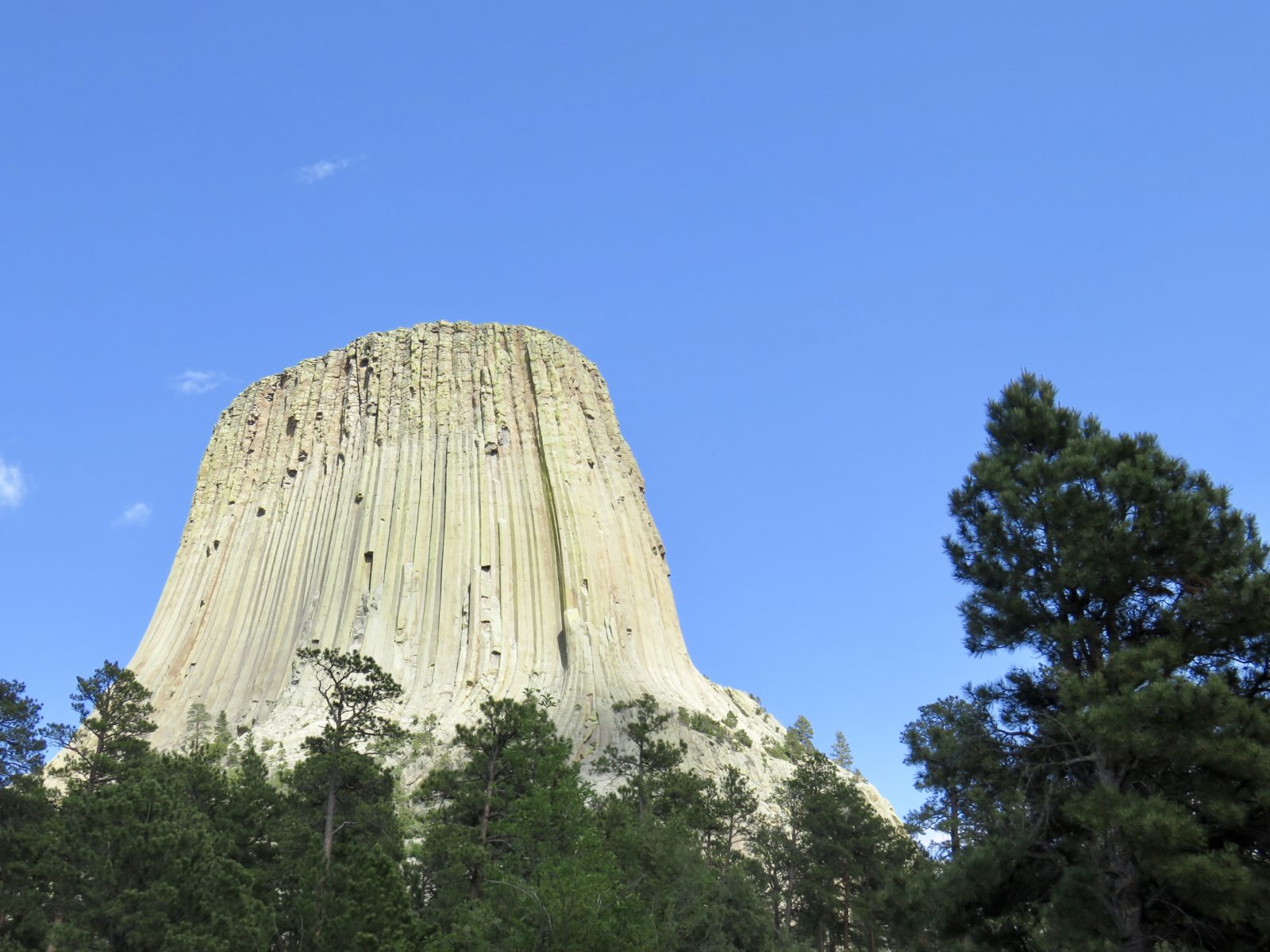 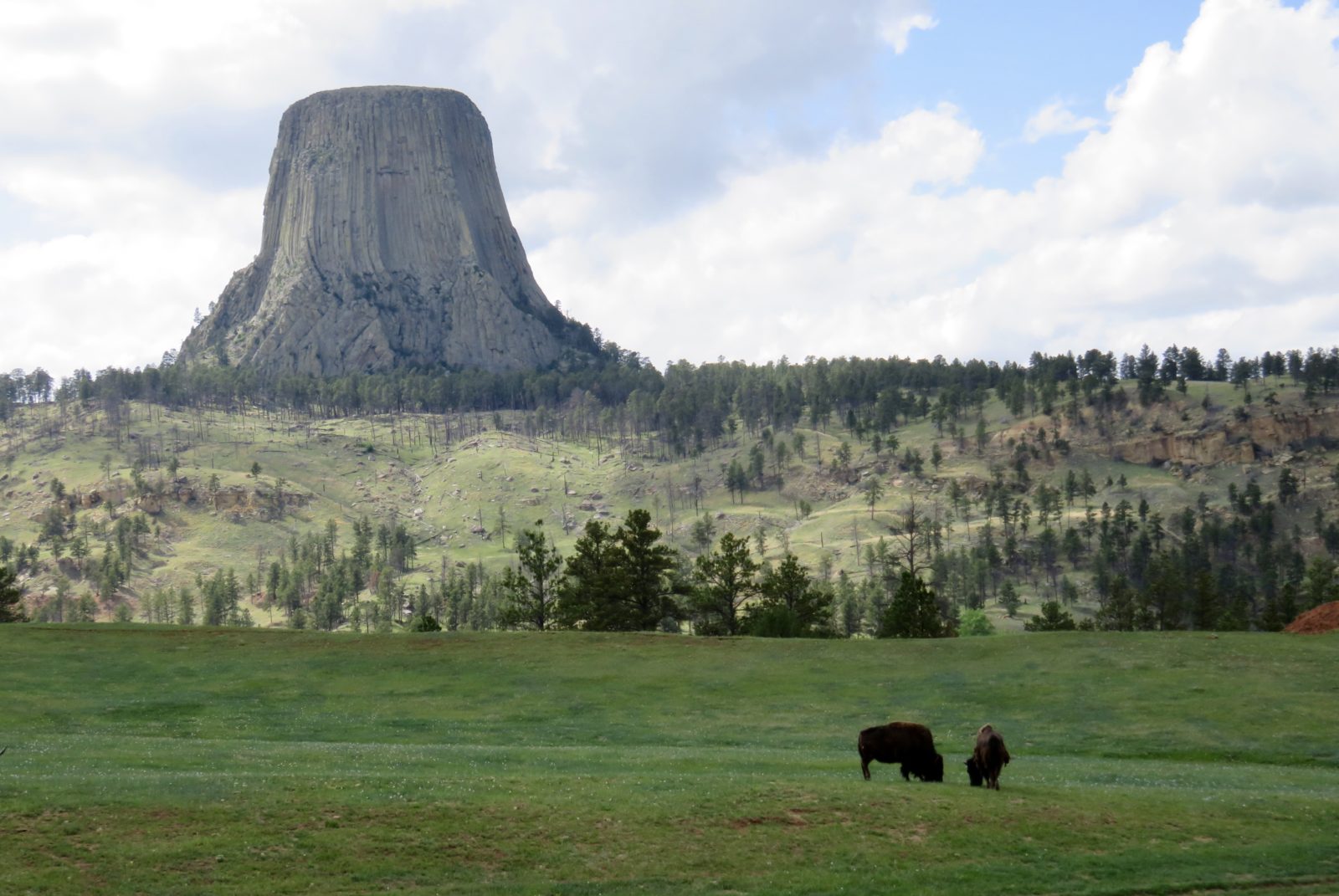 The Devils Tower is famous for many reasons. It is a place of worship for many indigenous peoples. It was America’s first National Monument, as decreed by Teddy Roosevelt in 1906. Close Encounters of the Third Kind was filmed here. And without fail, when there is a large, tall obstruction in existence, people will risk all to climb it.

Climbing one of the established 150 climbing routes looks death-defying. The routes range from relatively easy to some of the most difficult in the world, with many climbers setting records. 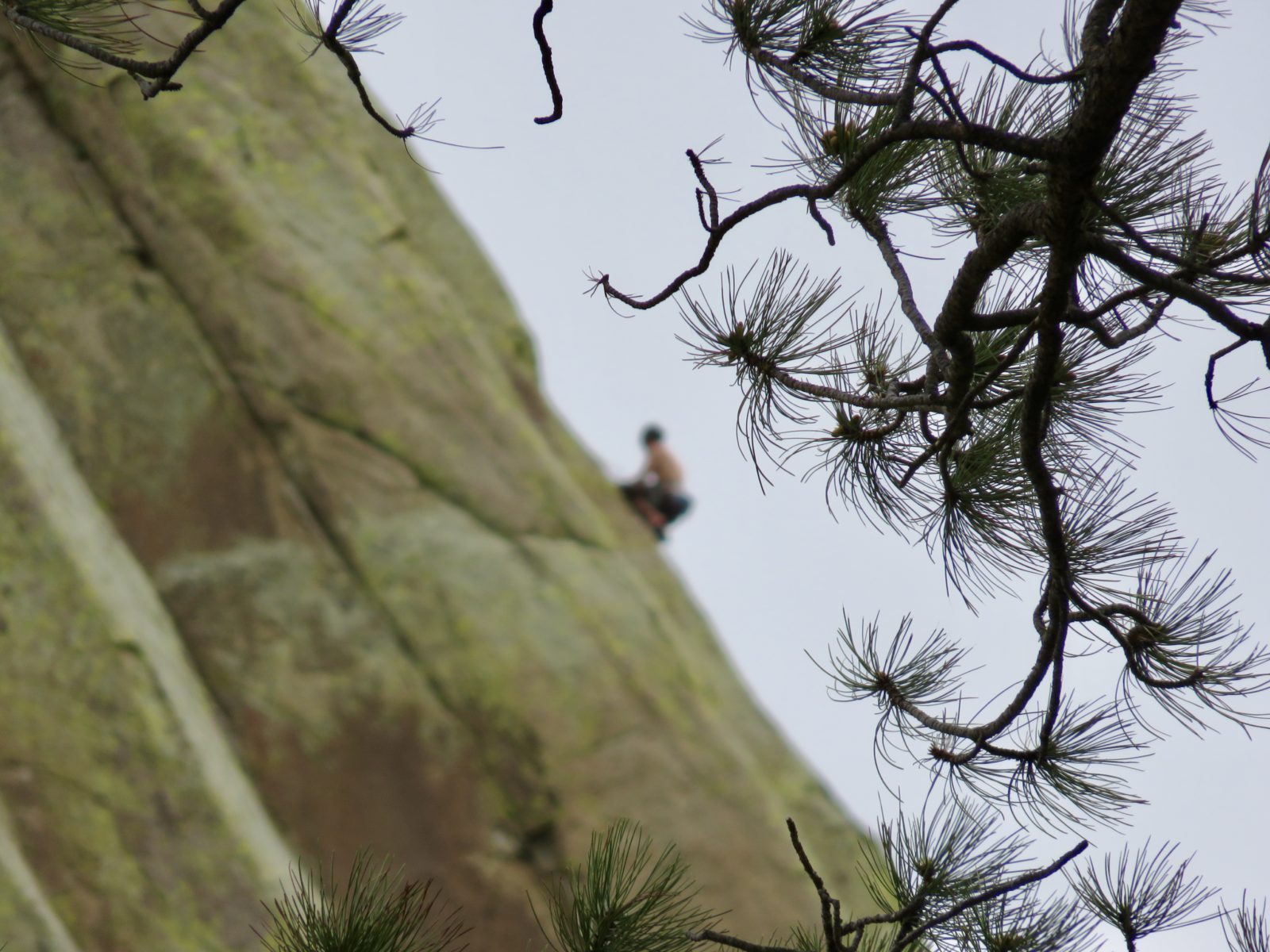 Records show that in 1893, William Rogers and Willard Ripley used wooden pegs to create a makeshift ladder to help them reach the top. Remains of the wooden ladder can still be seen if one looks hard through the viewfinder. 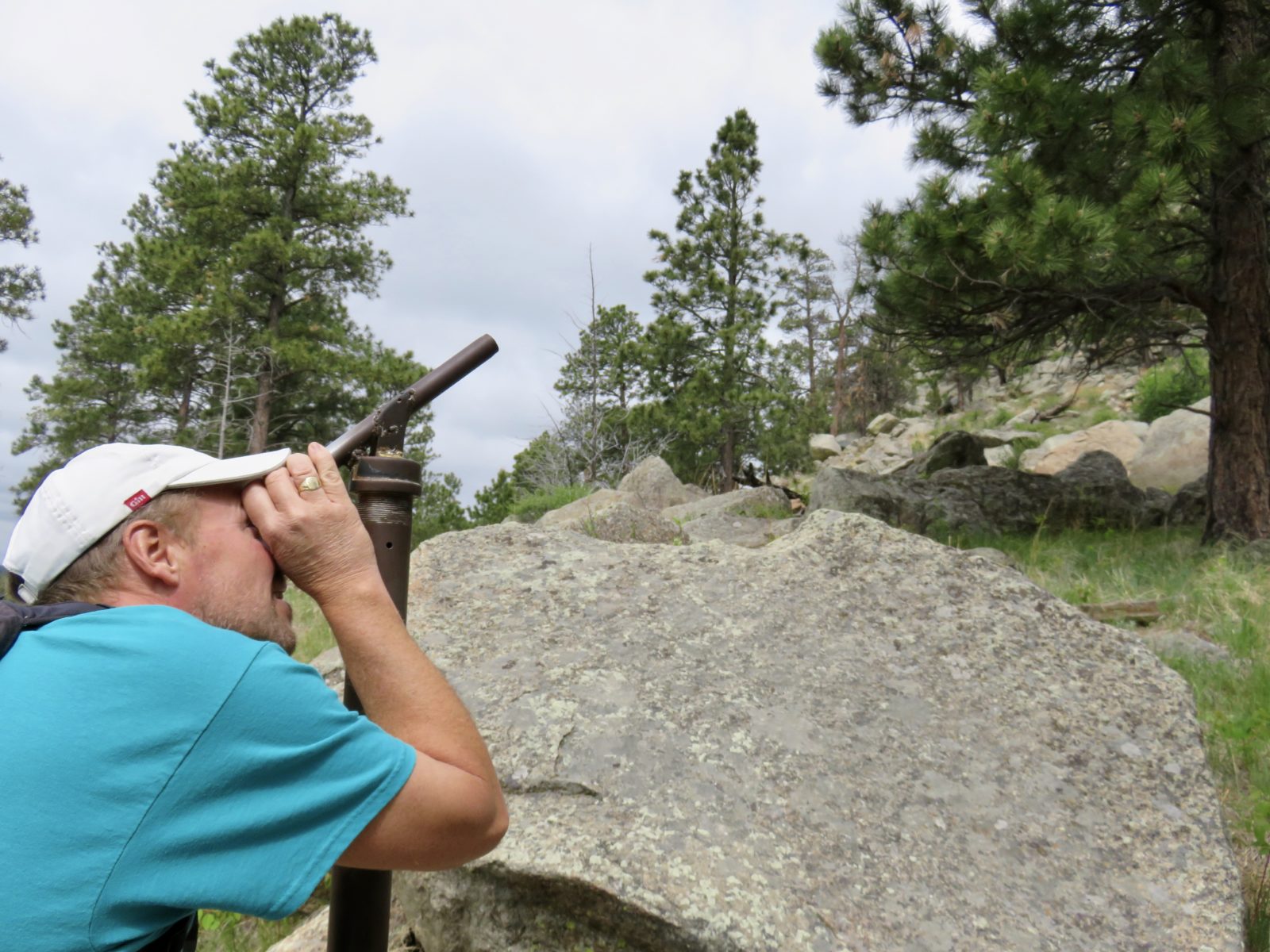 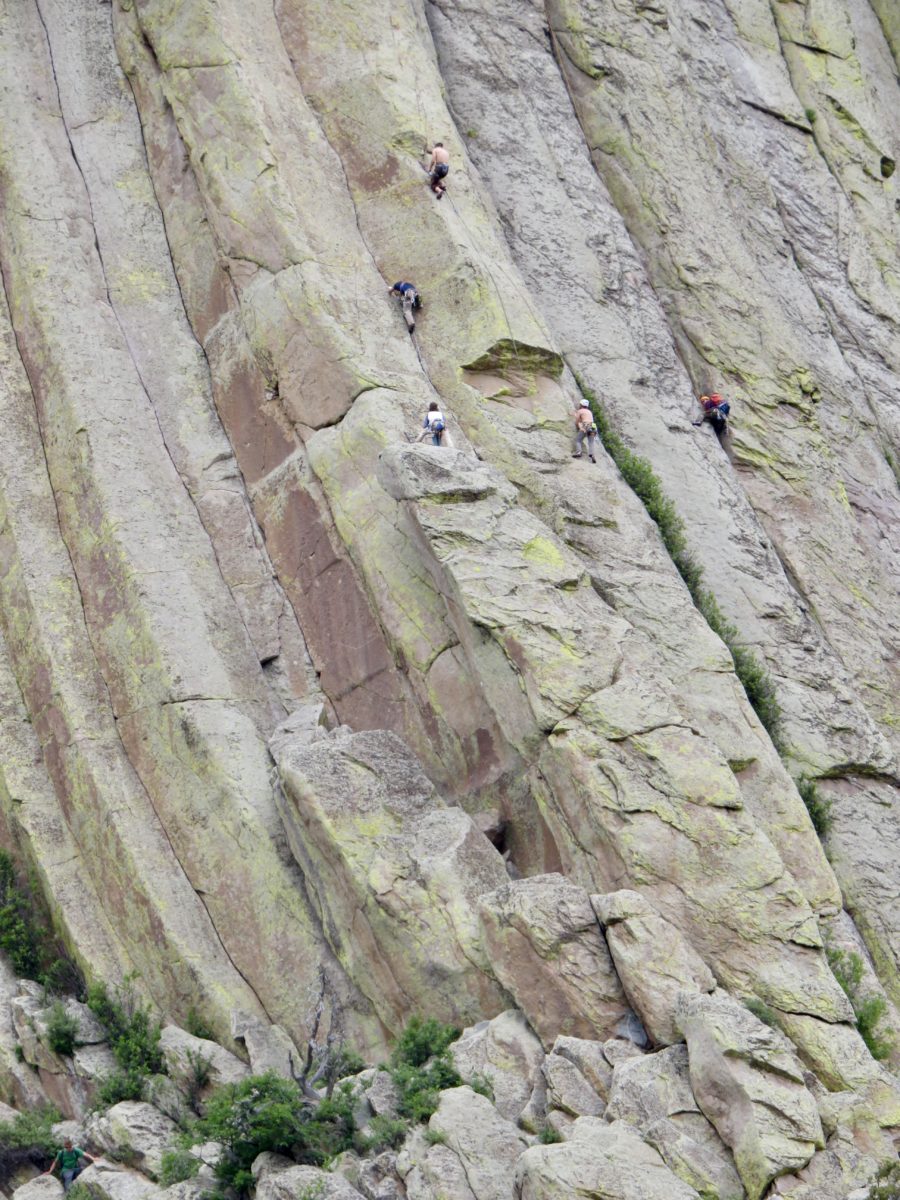 Roughly 6,000 climbers ascend (and descend) the Tower every year. Registering with the Rangers Office allows you to climb, and it might only take you one day. The average time for two climbers to climb the Durrance Route is between 4 and 6 hours, and you might only need 1 to 2 hours to rappel down. However, it’s important to remember not to plan any climbing expeditions in June, when the June Voluntary Closure is respectfully observed by (almost) everyone.

American Indian tribes consider climbing the Tower disrespectful, and the surrounding lands as sacred. Discreet yet colorful bundles of cloth left by American Indian tribes as sacred offerings are scattered around. Signs along the trails remind visitors not to disturb prayer bundles in this sacred space. To those who worship here, this is their cathedral, and we remain respectful as we spend the days hiking. 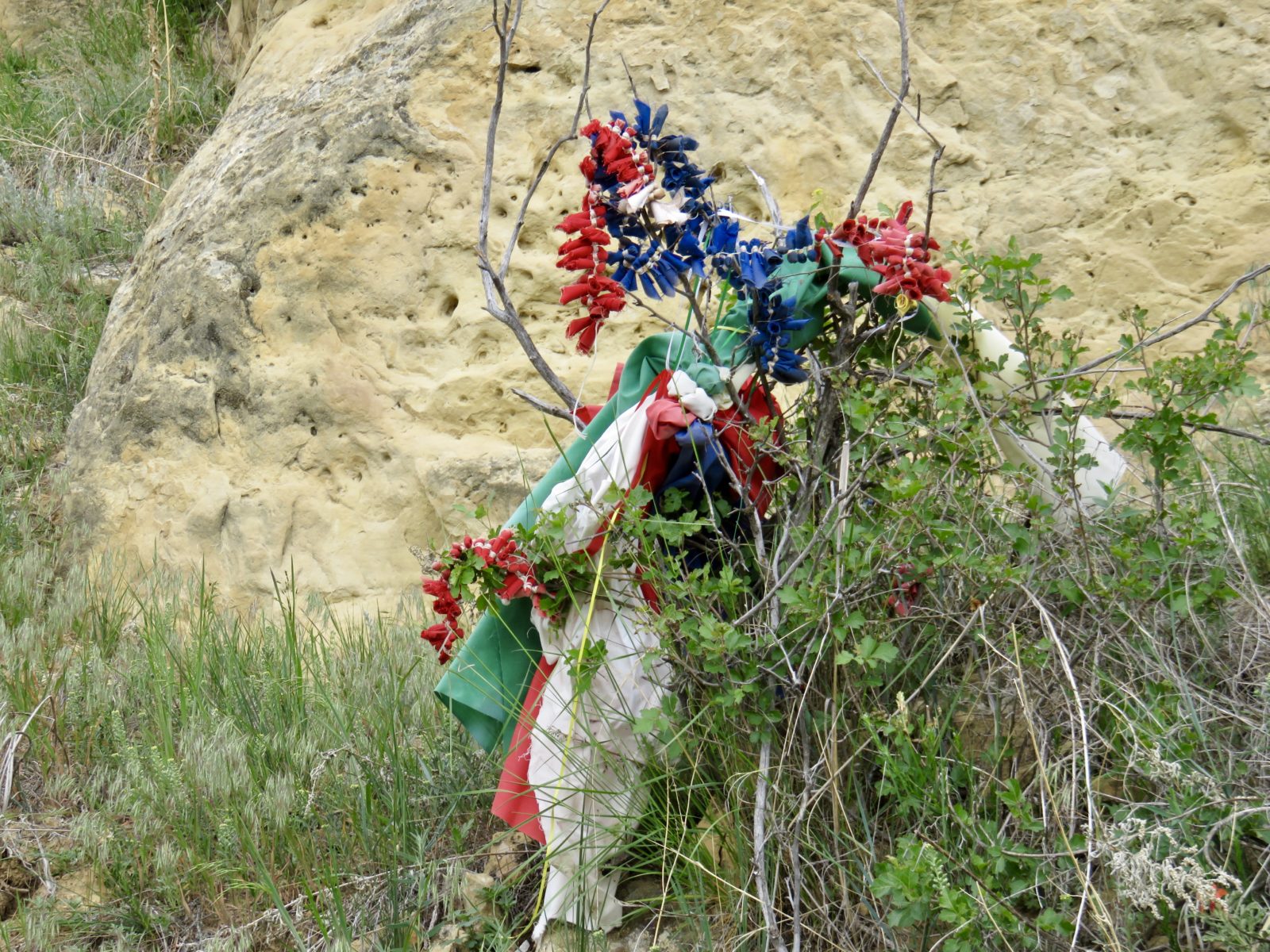 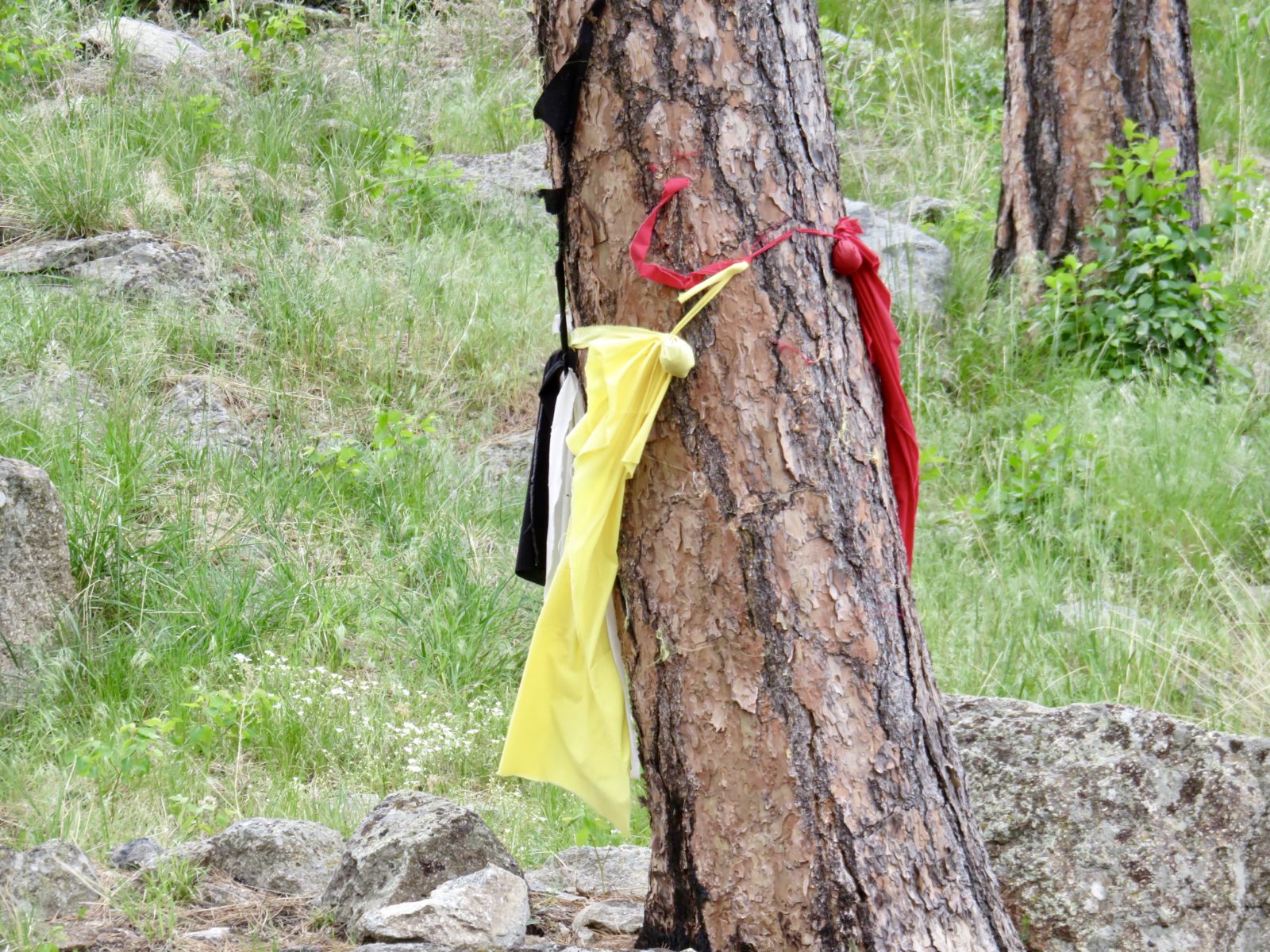 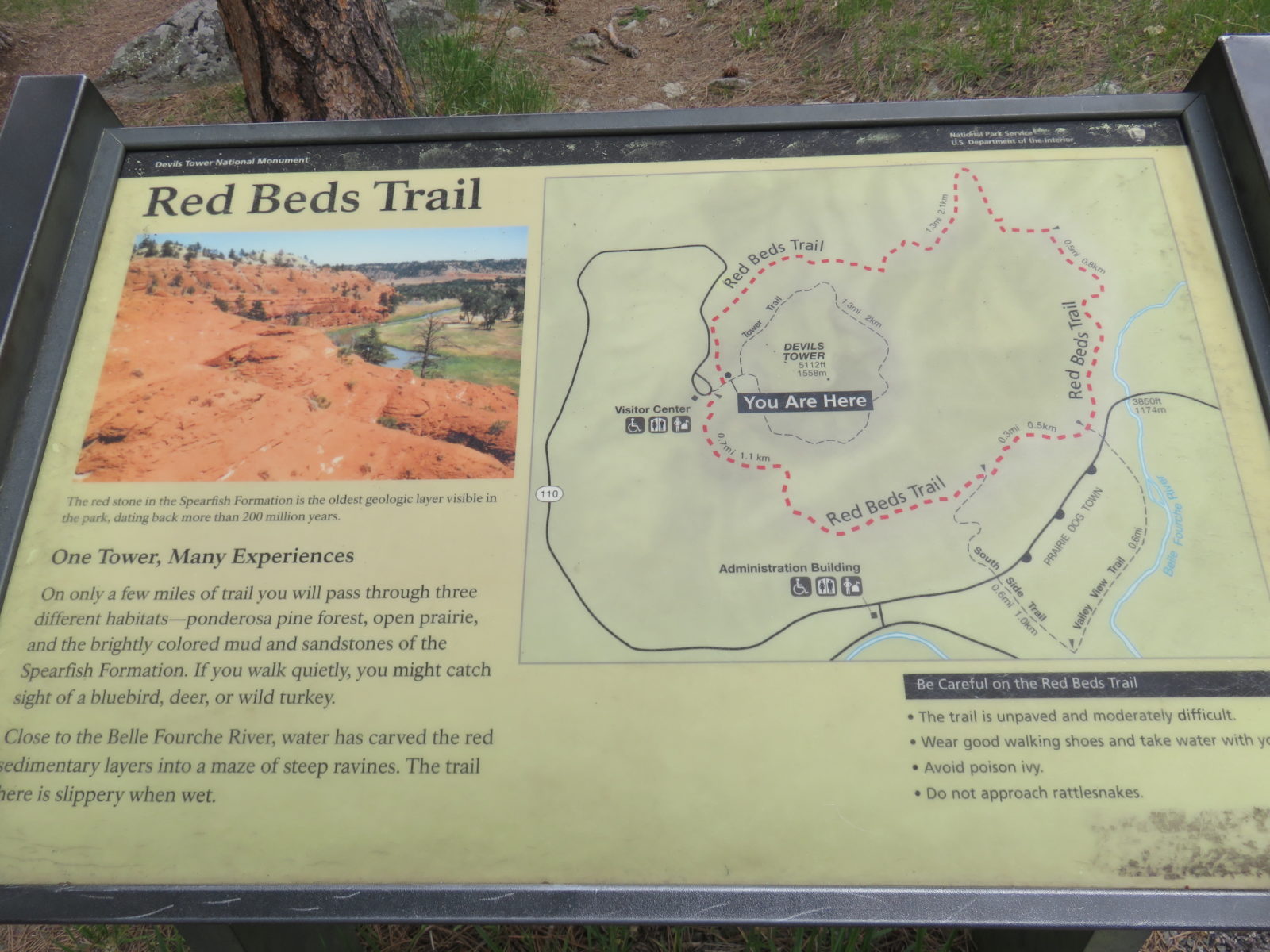 The Tower Trail is 1.3 miles long and seems to be the most popular route around the base of the Tower. 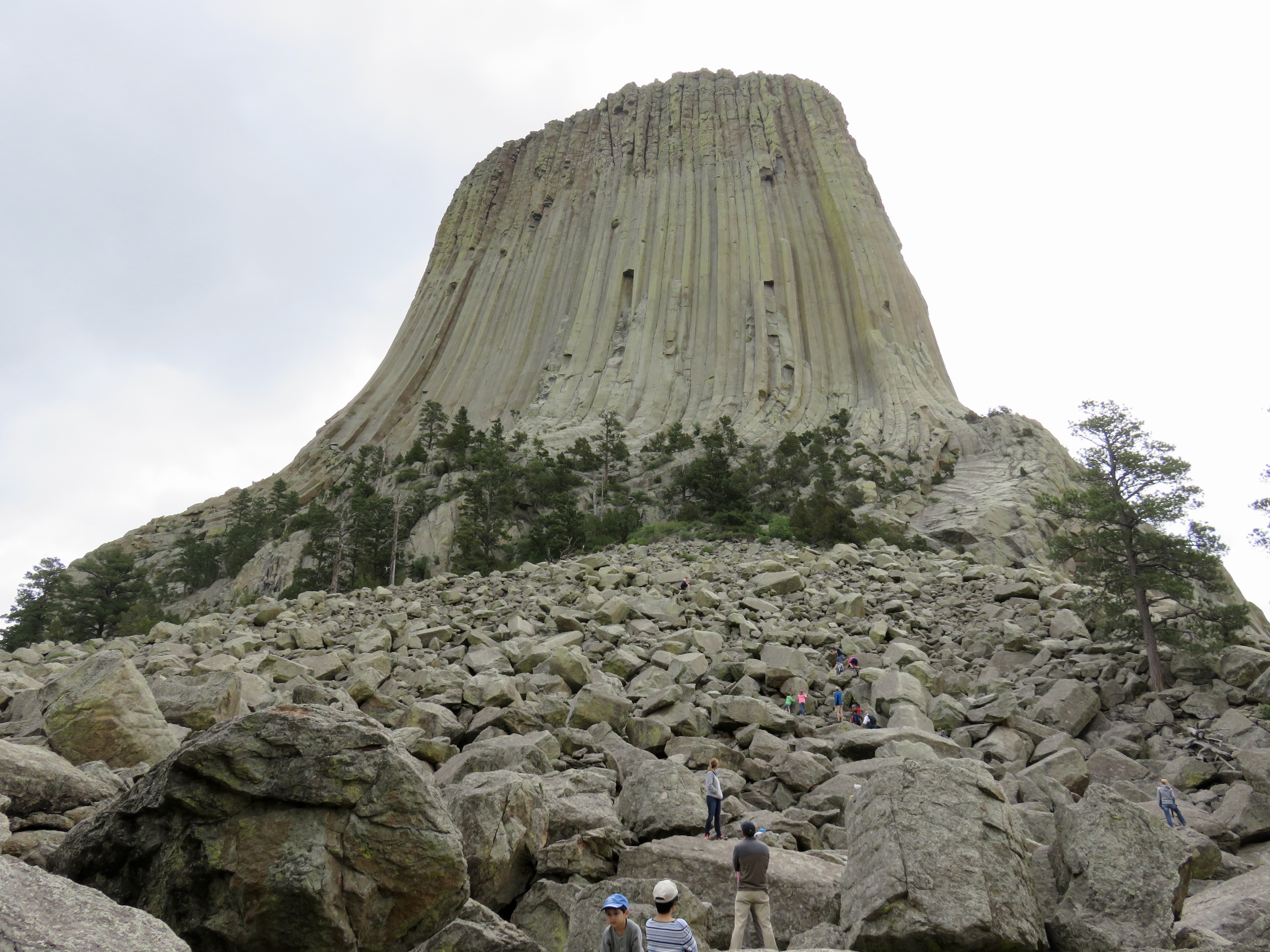 The 1.5 mile Joyner Ridge Trail offers pretty views of the Tower and is less populated. We were alone on the Red Beds Trail, where we finally cleared the many fallen boulders and found the area opened up with views of grasslands, red hues, and Ponderosa Pine forests. The forests provide shade for the grasslands, which are home to a multitude of wildlife that mostly remain hidden – except for the prairie dogs. 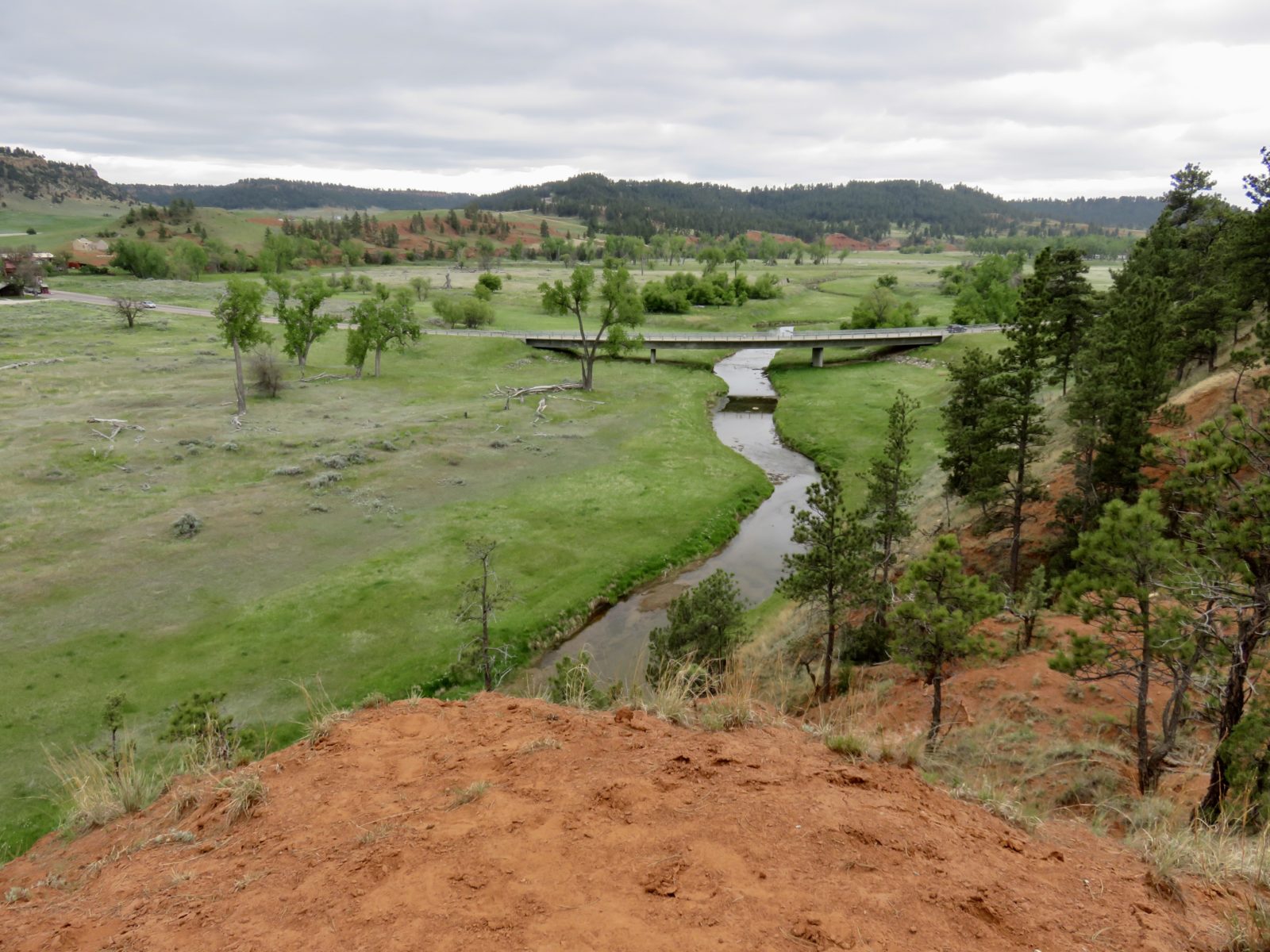 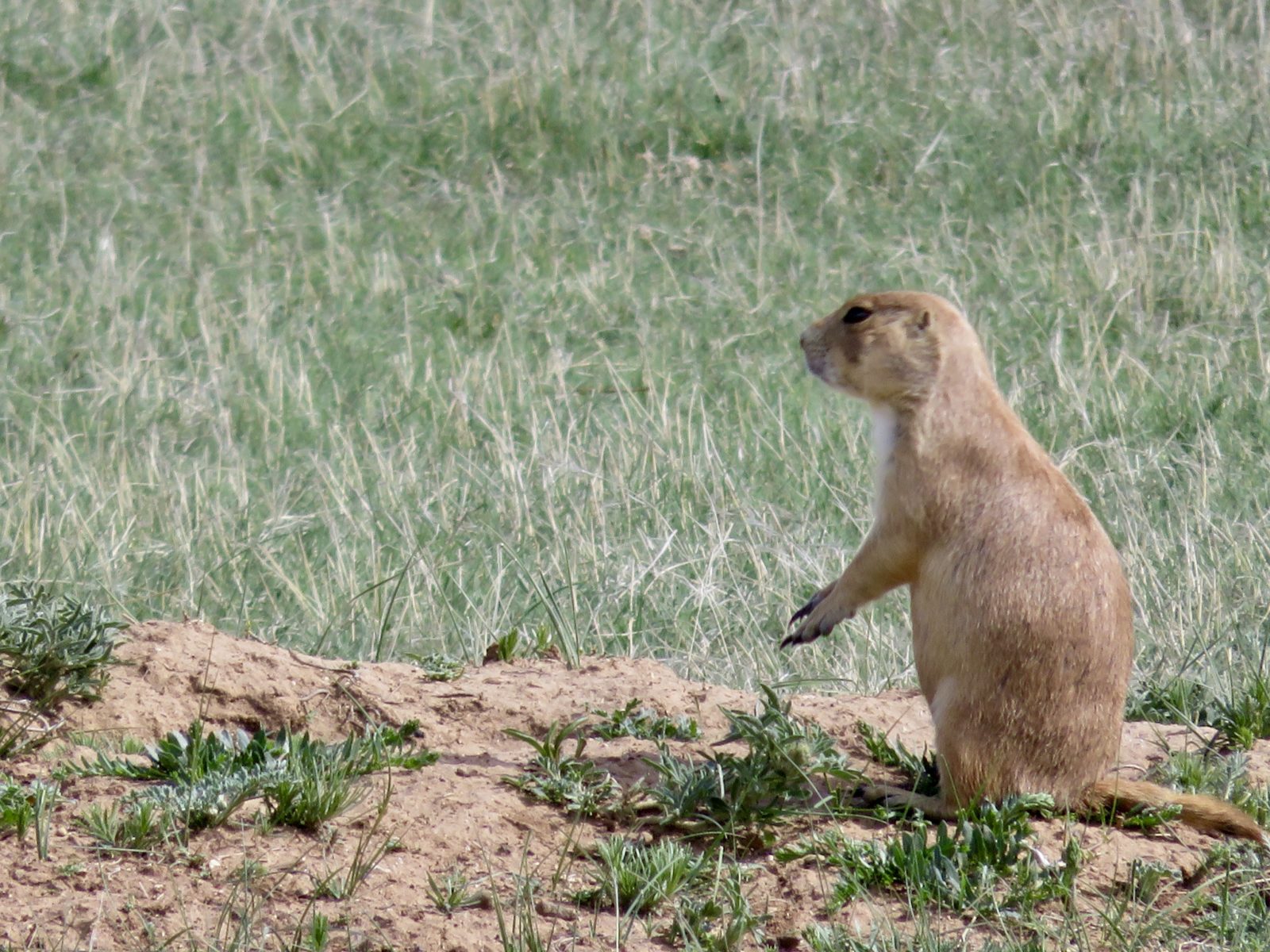 Prairie dogs are plentiful here, and we see a few around our home for the evening – the KOA Campground where, after a delicious dinner (and to get in the mood we made sure it was complete with mashed potatoes), we splurged on a special dessert from the Sweet Shoppe.  We brought our treats to the amphitheater, where on our camp chairs we enjoyed the nightly showing of Close Encounters of the Third Kind, as Mashed Potato Mountain, aka The Devils Tower, tried to hide behind the trees but loomed very large in our mind’s eye. 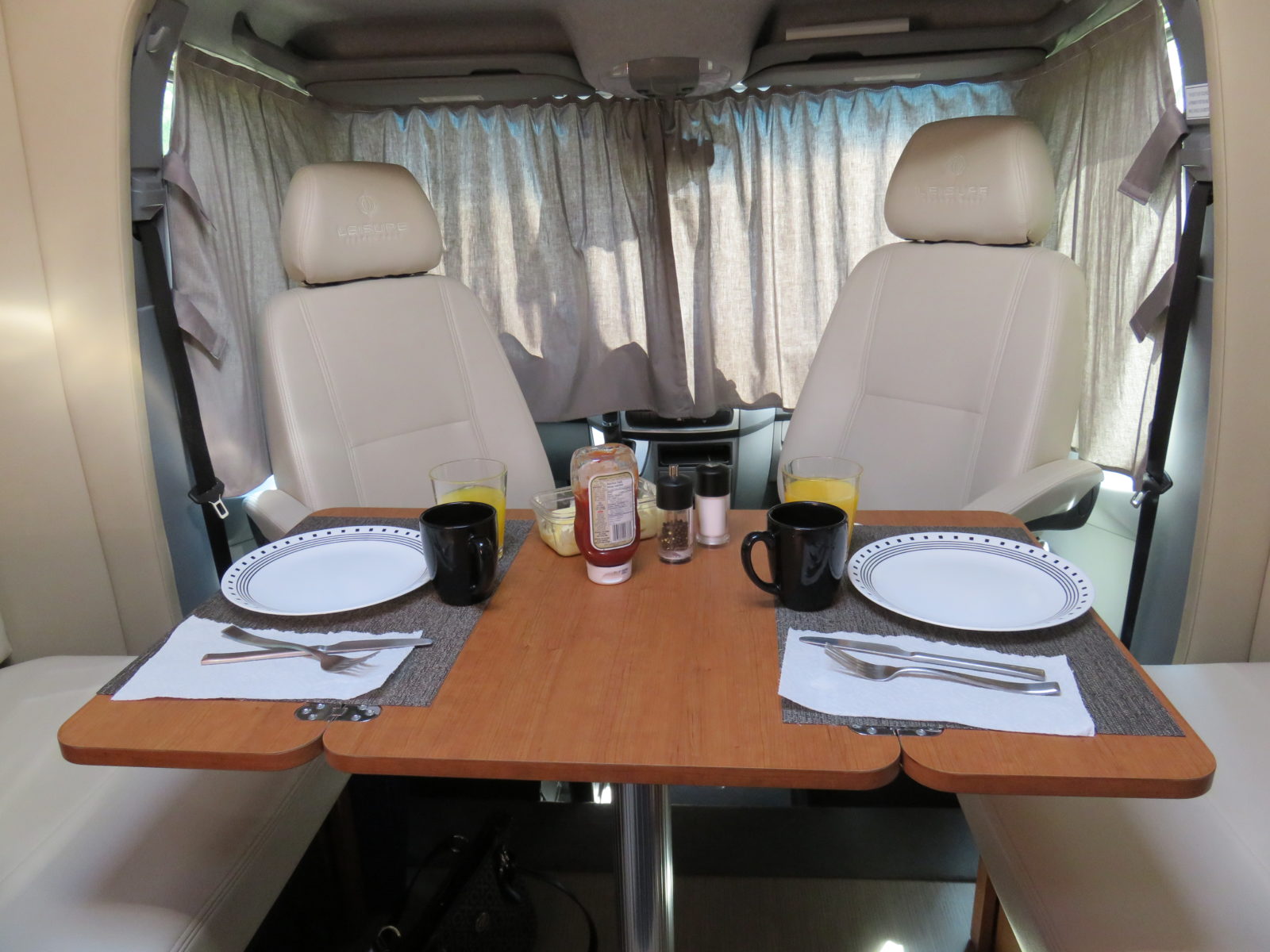 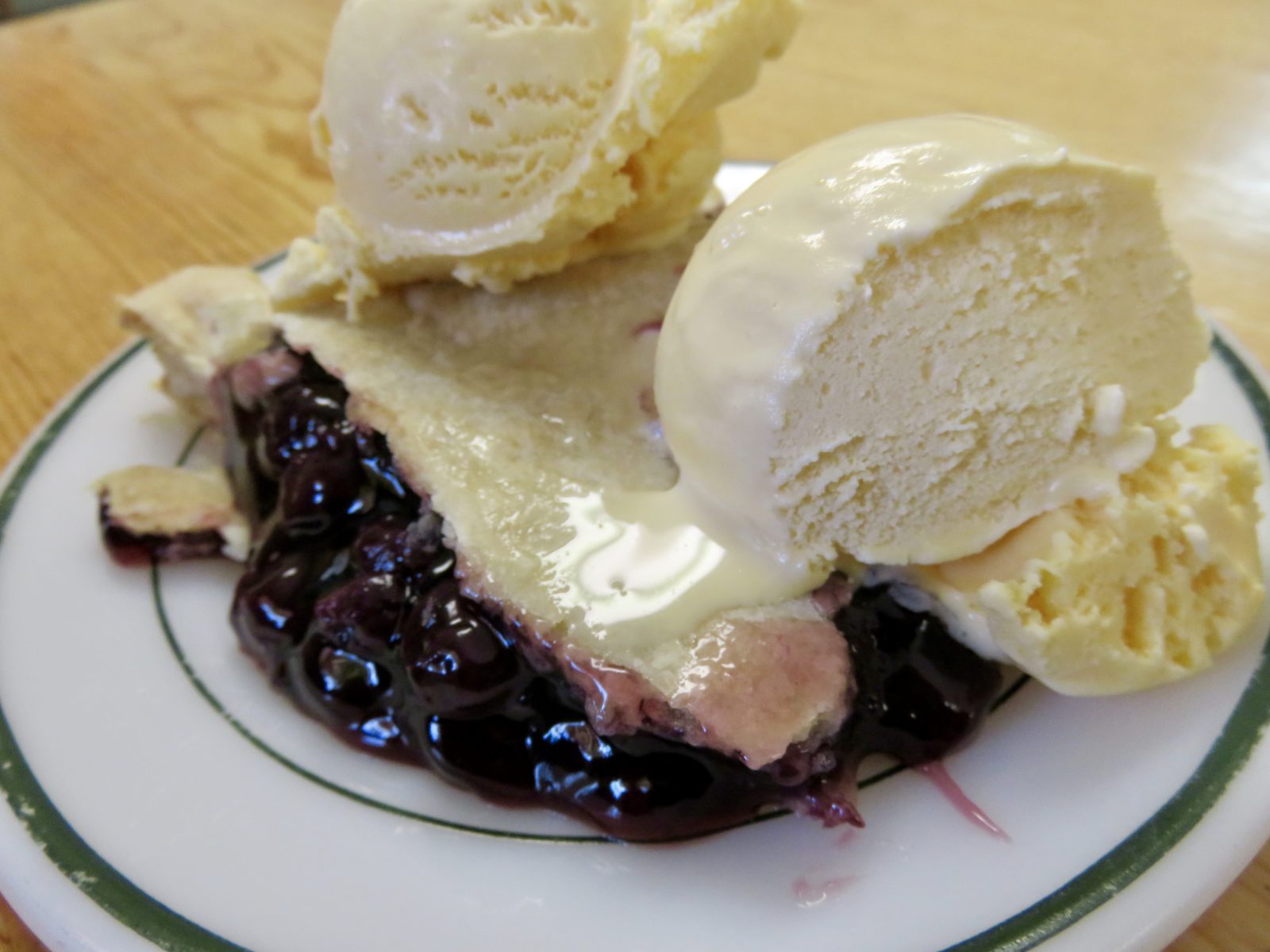 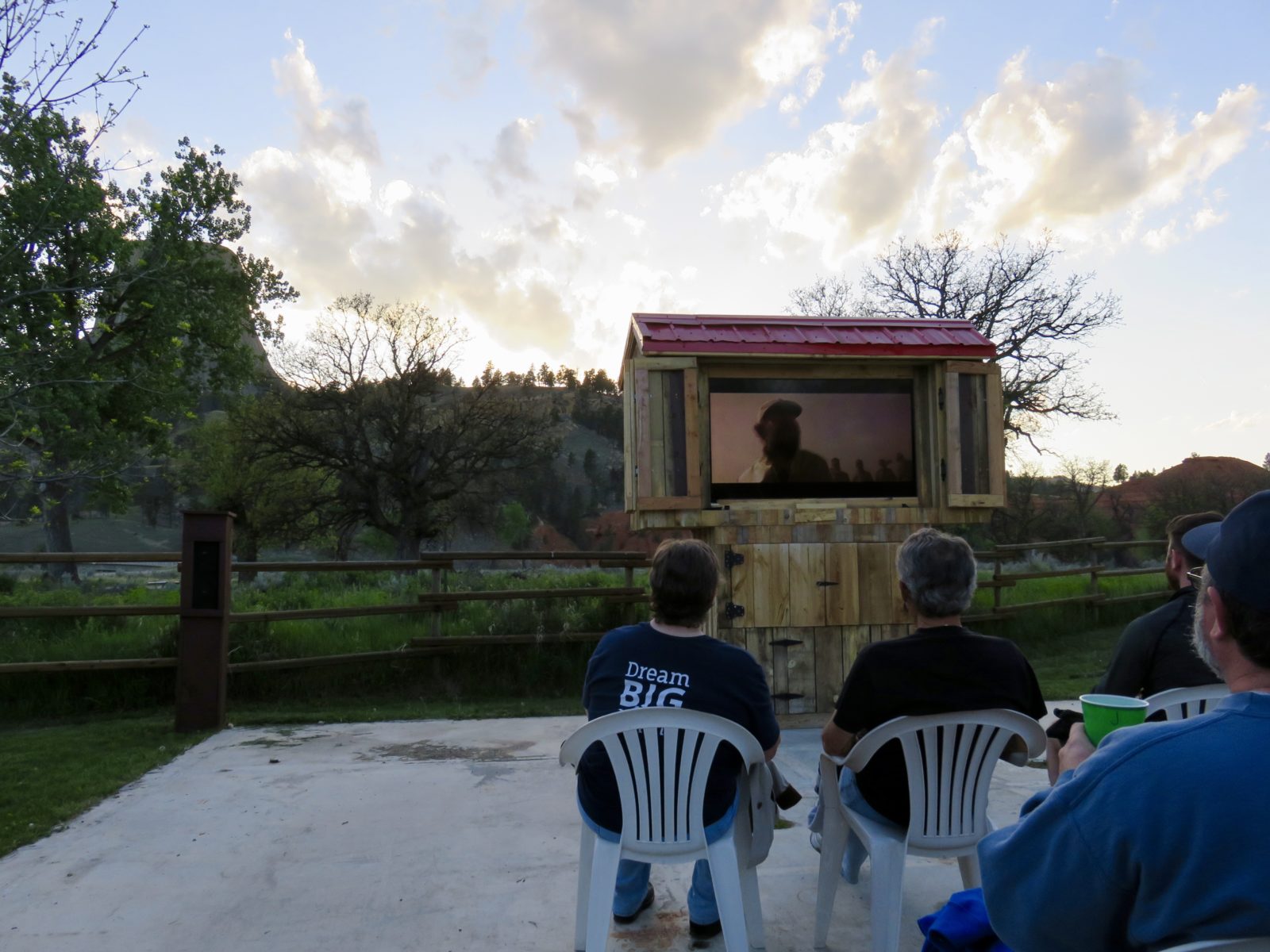 Our mind’s eye will never forget our experience of this place, as we clambered over the boulders, walked around The Devils Tower, and yes, even felt the presence of the Bear, perhaps hiding behind the colorful sacred bundles tied to the Ponderosa Pines.

Ponderosa Pines growing on the Black Hills that are not actually black, in the state of Wyoming, in the somewhat mountainous region that is the Western United States, as we drove the roads of the Great Plains Region of North America in the comfort of our luxurious Leisure Travel Van Unity IB. 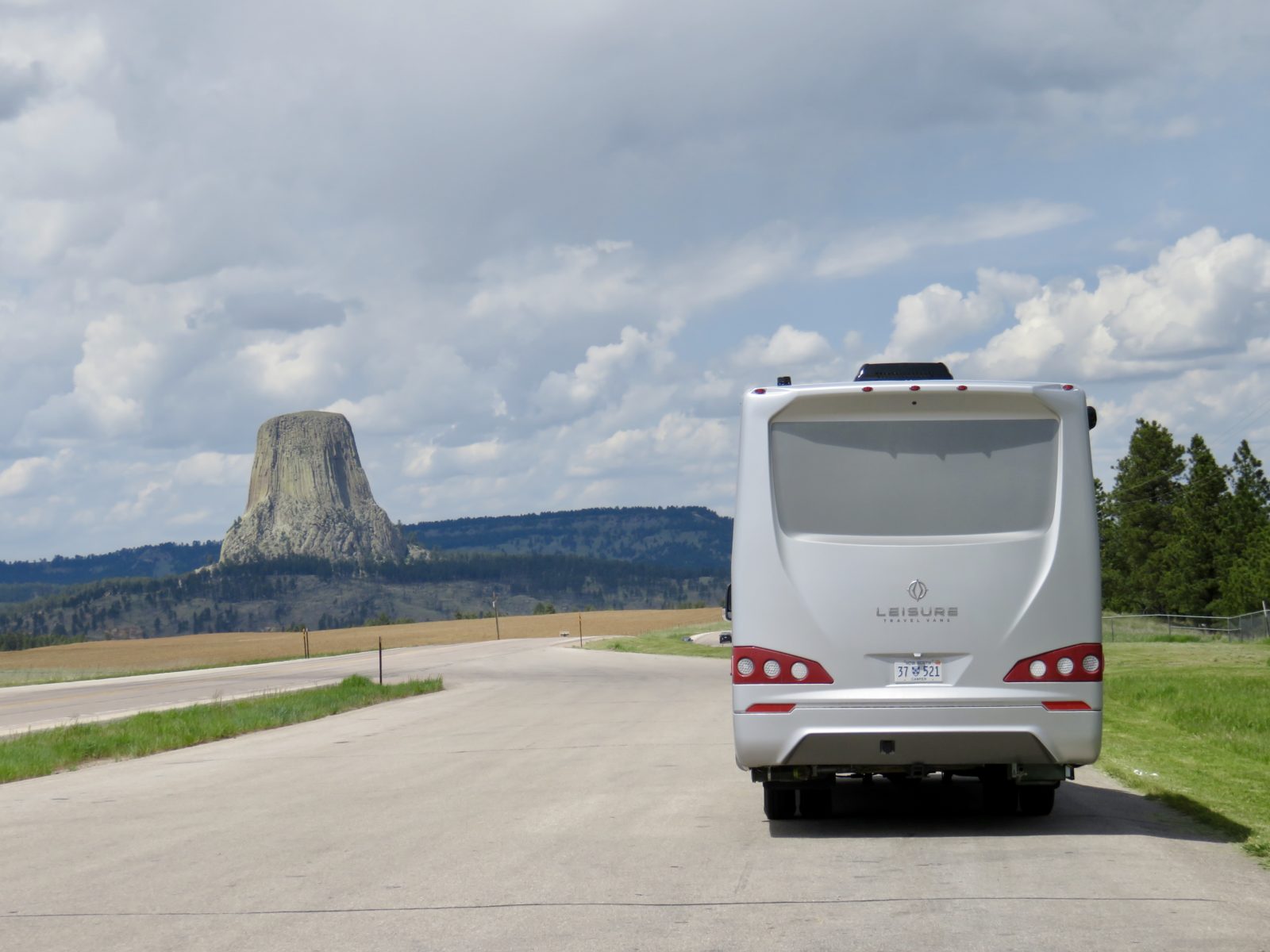