It’s late July, 2020, and we are fully entrenched in a global pandemic; we haven’t seen whole faces in public for some time now. There is uncertainty, chaos, disorganization, disbelief, and a collective fear the likes of which our lives have never seen. So what are we to do? Roadtrip. Duh. Obviously.

And so, the best of friends plotted and planned and then gathered three dogs, one Leisure Travel Van, and one look-alike RV, and embarked on a two-week journey from the Arizona desert, through Utah, Wyoming, Idaho, and Montana. Making our way to a national landmark called Old Faithful seemed fitting and oh-so-necessary, as we all reached for a sense of normalcy and any manner of reliability. The roads were definitely less-traveled, the sightseeing stops more scenic, as if nature was taking a moment to stretch and catch its breath. There was a decided eeriness to the miles and miles of emptiness that would normally be packed with scores of family vacationers. The towering mountains of Zion, the unmistakable rock formations of Moab, and the many peaceful cities of Utah escorted us to Idaho. 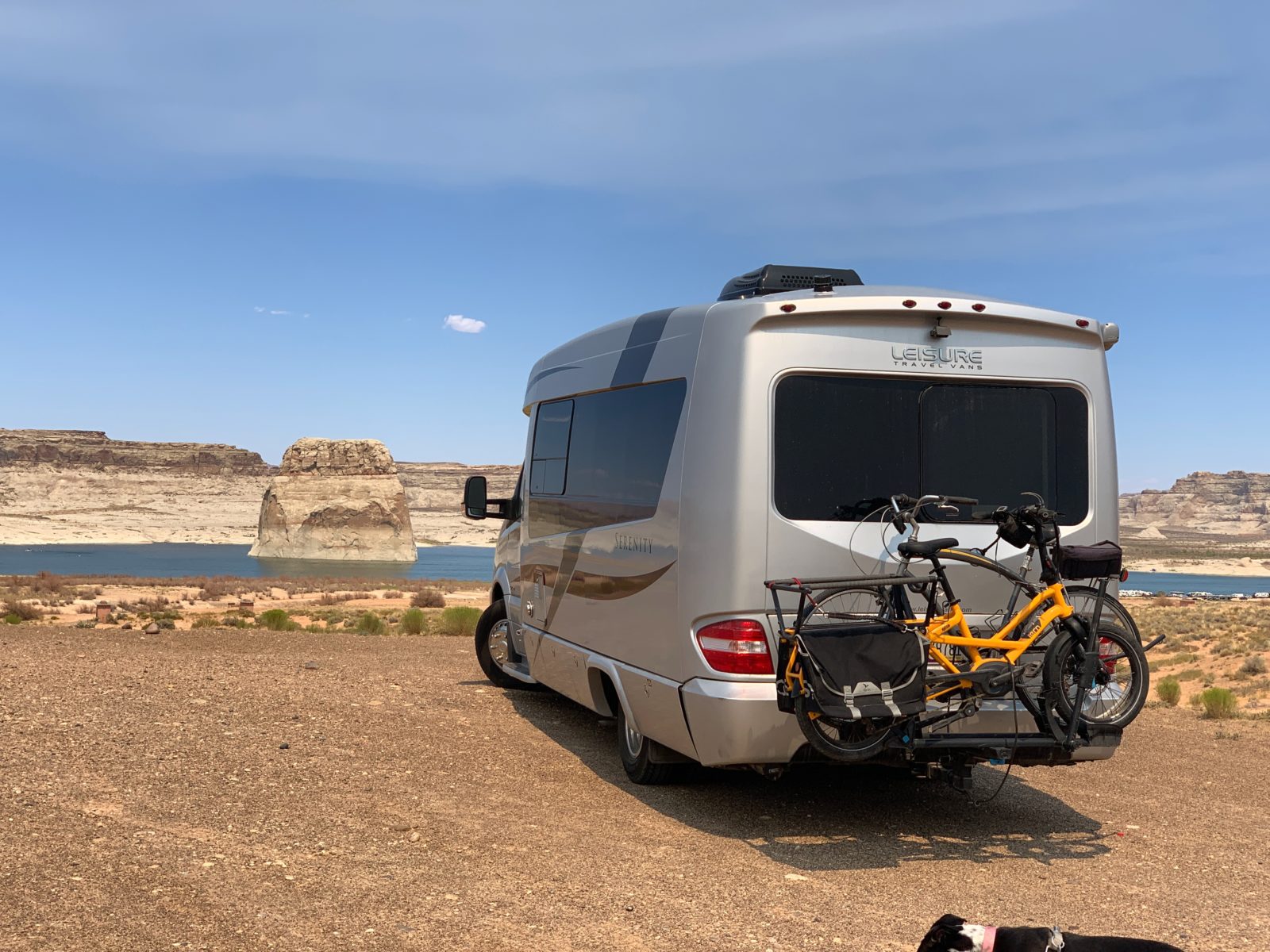 I am not sure there is a prettier city in the world than Provo, and as we drove through the BYU campus, I finally understood why former Chicago Bears and BYU quarterback, Jim McMahon, chose to play college football at BYU: he was hypnotized by its beauty. Idaho was picturesque, and I felt a little shame in reducing it to some sort of gateway to “things even prettier”. Southern and southeastern parts of the state reminded me of traveling through the plains of Nebraska as a child, riding seatbelt-less in the far rear jump seats of our Ford Country Squire station wagon, fighting with my siblings and selectively breathing in between surf-worthy waves of second-hand smoke.

Nevertheless, we ended up in the bustling, not-so-little, wilderness town of Jackson, Wyoming. We would finish a long day behind the wheel and seek rest and relaxation in the vast shadows of Grand Teton National Park. I’ve been lucky enough to have lived among mountains for the past 38 years, but Grand Teton, the highest mountain in that range, is awe-inspiring and commanding. As I stood before it, I could hear it speak to me in a thundering, James Earl Jones-like voice, “Look at me… I will be here long after you are gone. Respect me, and not just because I rise above your land some 14,000 feet, but because I told you to.”

And everywhere you go, he is there, staring down you, judging, flexing his chiseled chin. The epitome of beauty and brawn. I find it wholly disappointing that every photo I took didn’t come close to capturing the grandeur of this national treasure. I suppose this is why some things you just have to see in person.

As we ventured out into the Wyoming wilderness, anxious to find our very own truly primitive campsite, we realized quickly that even though it is wild land indeed, the rules of camping in the Buffalo Fork River area are very much the same as any other park, or KOA, for that matter. You can only camp in designated sites. So much for the fleeting thoughts of still homesteading some land and never returning back home.

We drove for miles, winding our way through thickets and rough terrain, hoping for an available campsite just around the bend… and each time we were met with disappointment and emptiness. With evening drawing to an end, we were running out of options. Little did we know that the weekend in question coincided with something called Pioneer Days, a legal holiday in the state of Utah, where Utah-folk would trek out and camp in the wildernesses of Utah, and its nearby states, to celebrate their first settlers. Naturally, this included all of Wyoming, Idaho, and Montana, and we quickly learned that Utah folk take their Pioneer Days seriously. The prospect of finding a single site, as we drew closer and closer to the banks of the Buffalo Fork River, dwindled. Taking what we agreed would be the last road of possible campsites, we meandered and traversed quite literally to the river’s edge, finding nothing that qualified as a bona fide “numbered” campsite. We followed the rooted and uneven road to its end, intending on only making the U-turn of shame. But as we pulled into what appeared to be the three most perfectly positioned and scenic campsites imaginable (The Buffalo Fork River splitting into two tributaries amid a grassy, flat section of heaven-touched land with a mountainous background), we were greeted by a most friendly couple from upstate New York.

“Are you looking for a spot?” she asked.

I mopishly replied, “Yes, but we’ve pretty much exhausted our efforts.”

She continued, “Well, we are leaving tomorrow, but the guy that was in that site just left 30 minutes ago.”

As she spoke, she pointed to this slice of heaven at the end of the road/trail, smack dab on the river’s shore, with its own swimming hole and space for two motorhomes and room to roam. If there is a lottery equivalent in camping, we had just hit the big one. It was not just idyllic, it was life-substantiating. The gentle breeze, the setting sun, the not-so-distant rumble of river rapids, the blankets of wildflowers, the perfectly shaped swimming hole a few feet from our doors. We stared at our new temporary residence with equal parts amazement and appreciation, bathed in utter disbelief. 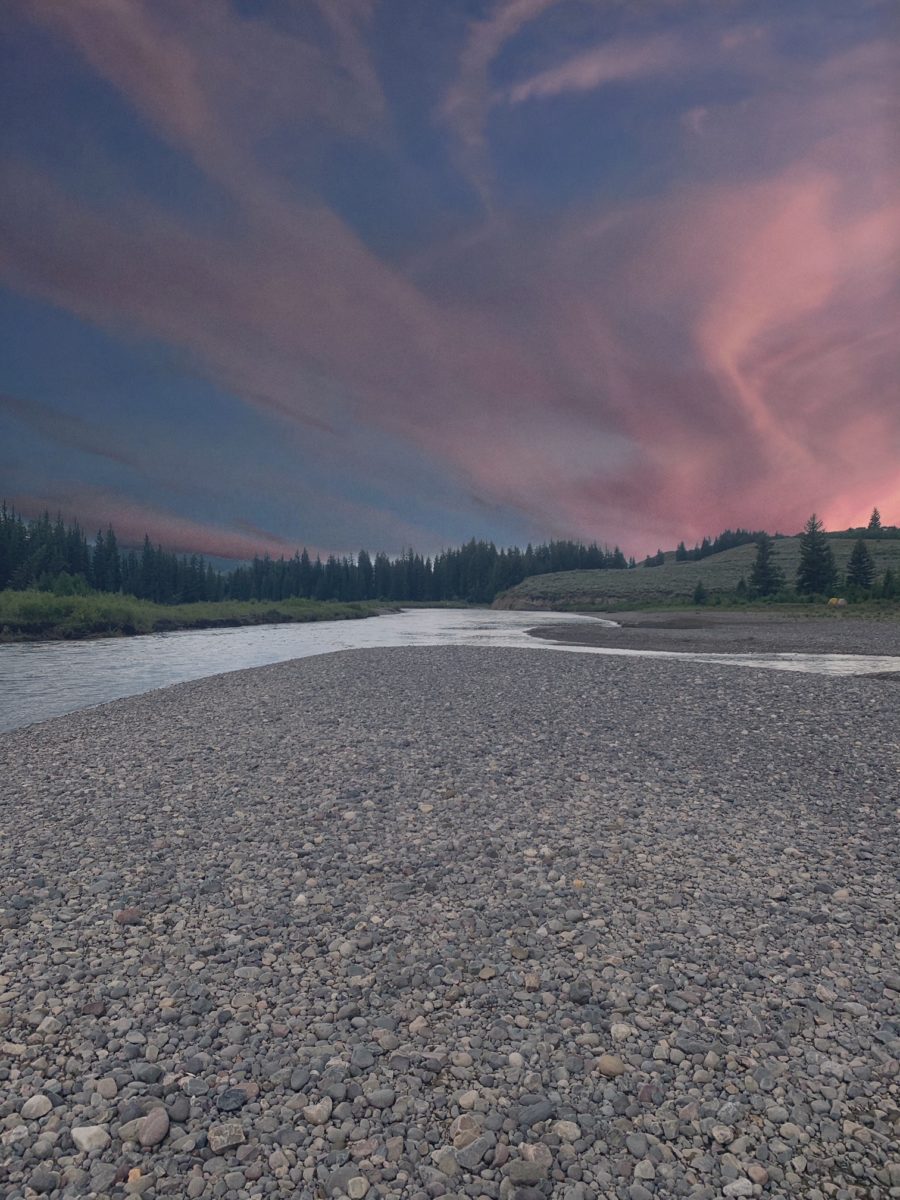 Everywhere, in virtually all corners of the world, people were dealing with distress. People were sick and dying, people were stuck inside their homes, deprived of work, common routines, entertainment, and social norms. People were learning how to communicate differently and how to be unselfish (at least most of us) all over again. And there we were, remotely disengaged from that world and reduced to four maskless friends; giggling, smiling, and breathing, as we overlooked a scene created and protected by some higher power. We took time to soak it all up, to appreciate the moment, the time, the elements of nature, and the reminder to try and slow down and not take things for granted. 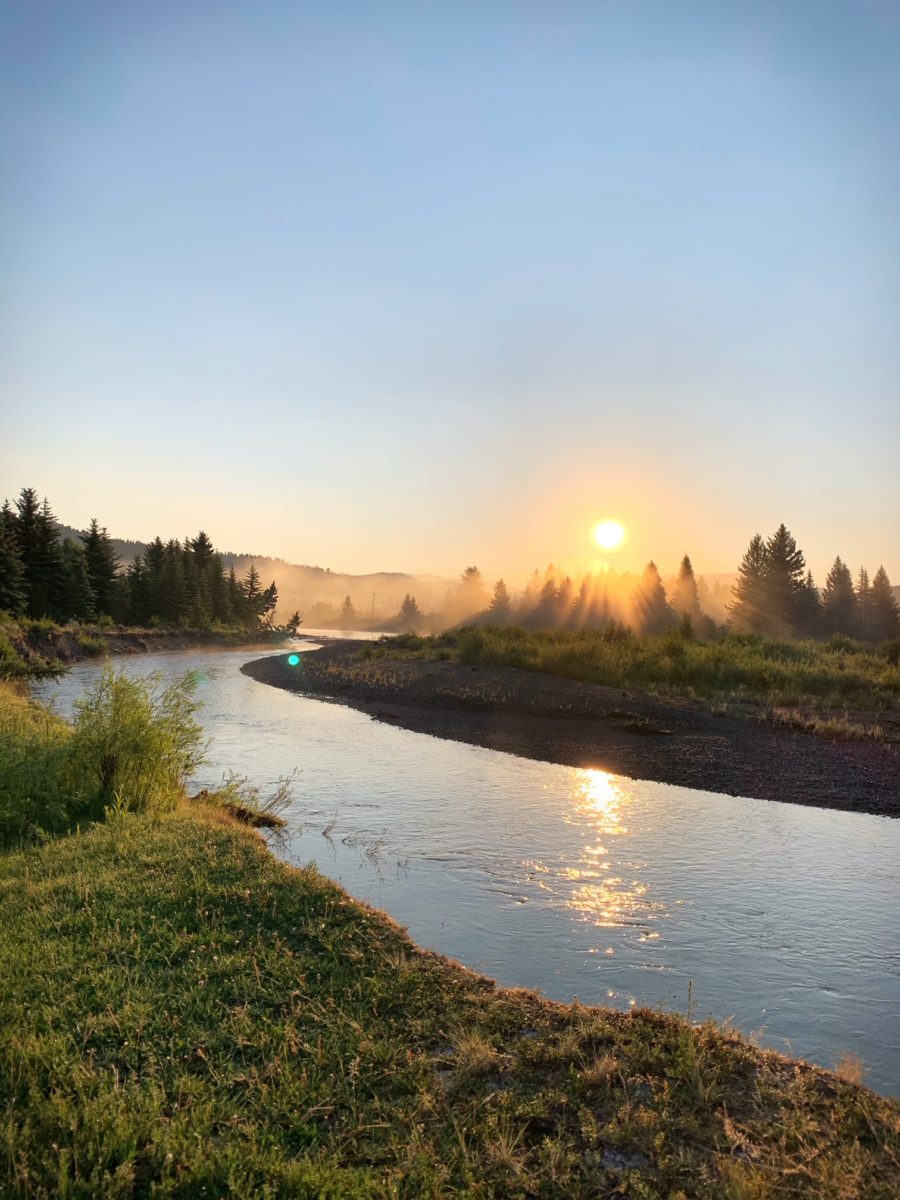 When we talk about motorhome, RV, camper, and van life, it’s inevitably intertwined with the word “freedom”: free to roam about, free to alter your reality, free to park and sleep wherever. But for one summer in 2020, the year that time mostly stood still, we all thought of freedom as a way of escaping what our lives had become and the magnitude of something so historic that it affected every single human on our planet. Through it all, we turned to the open roads, the landscapes, the wildlife, the pleasure of just driving ‘til you were done driving. From the glacier-fed lakes with turquoise-colored water to the all of five strangers who sat with us as Old Faithful erupted, we all left with a sense of gratitude, and a renewed belief that everything was going to be okay. Never have I ever been so in love with this method of travel, and never have I ever been so confident that my Leisure Travel Van is so much more than a recreational vehicle, but an extension of my home, an instrument for better mental health, a bridge to independence, and a portal into adventure. 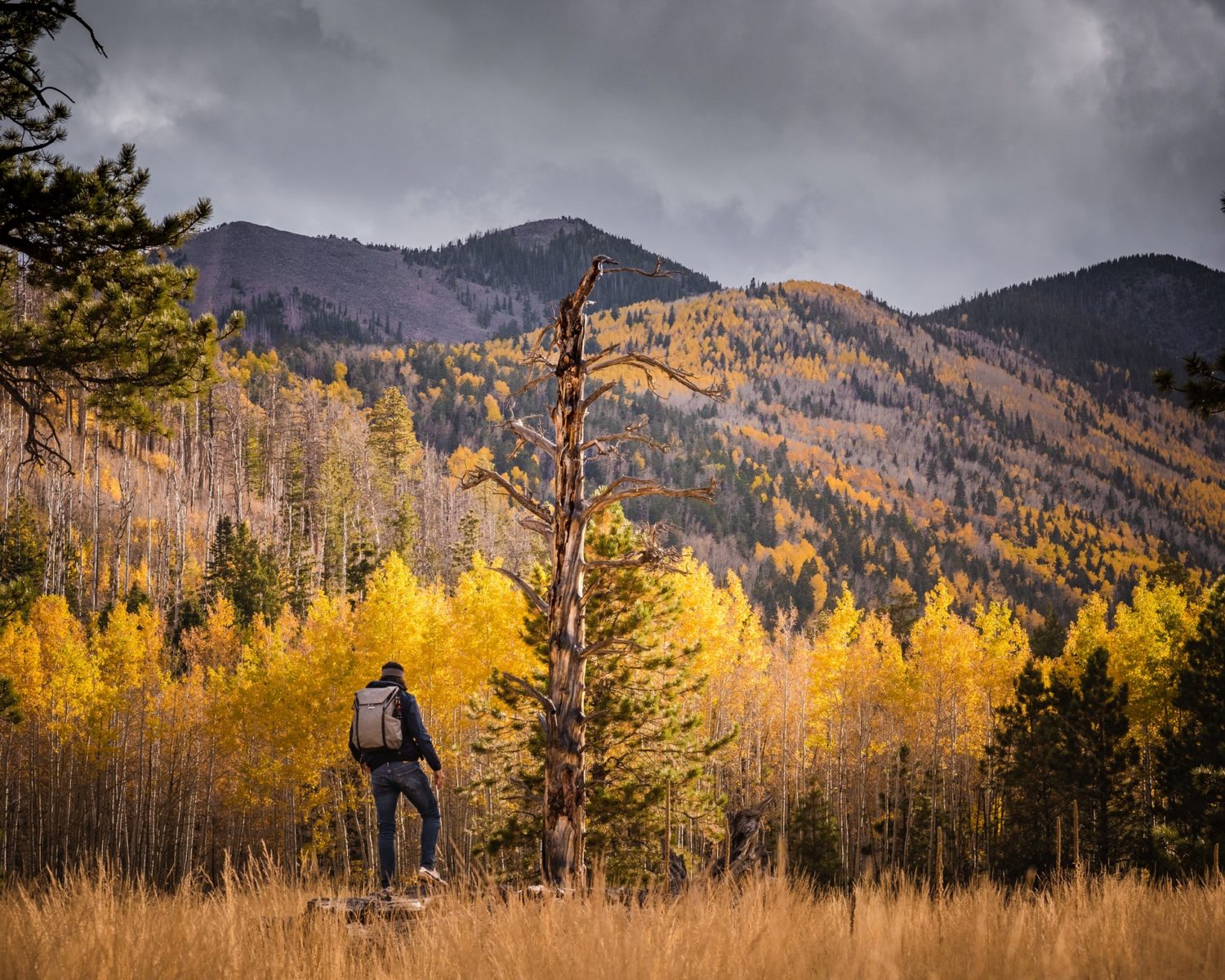 Every sensible desert-dweller needs a quick-escape destination, where one can go from 115 degrees to needing a sweatshirt at night in under a two-hour drive. Flagstaff, like many mountain towns, has everything a big-city fella would ever need and none of the stuff he purposely left behind. From its hundreds of miles of paths and trails to Northern Arizona University, Humphrey’s Peak, and Snowbowl for skiing, Flagstaff just might be the most well-rounded, if not perfect, weekend getaway in the country. 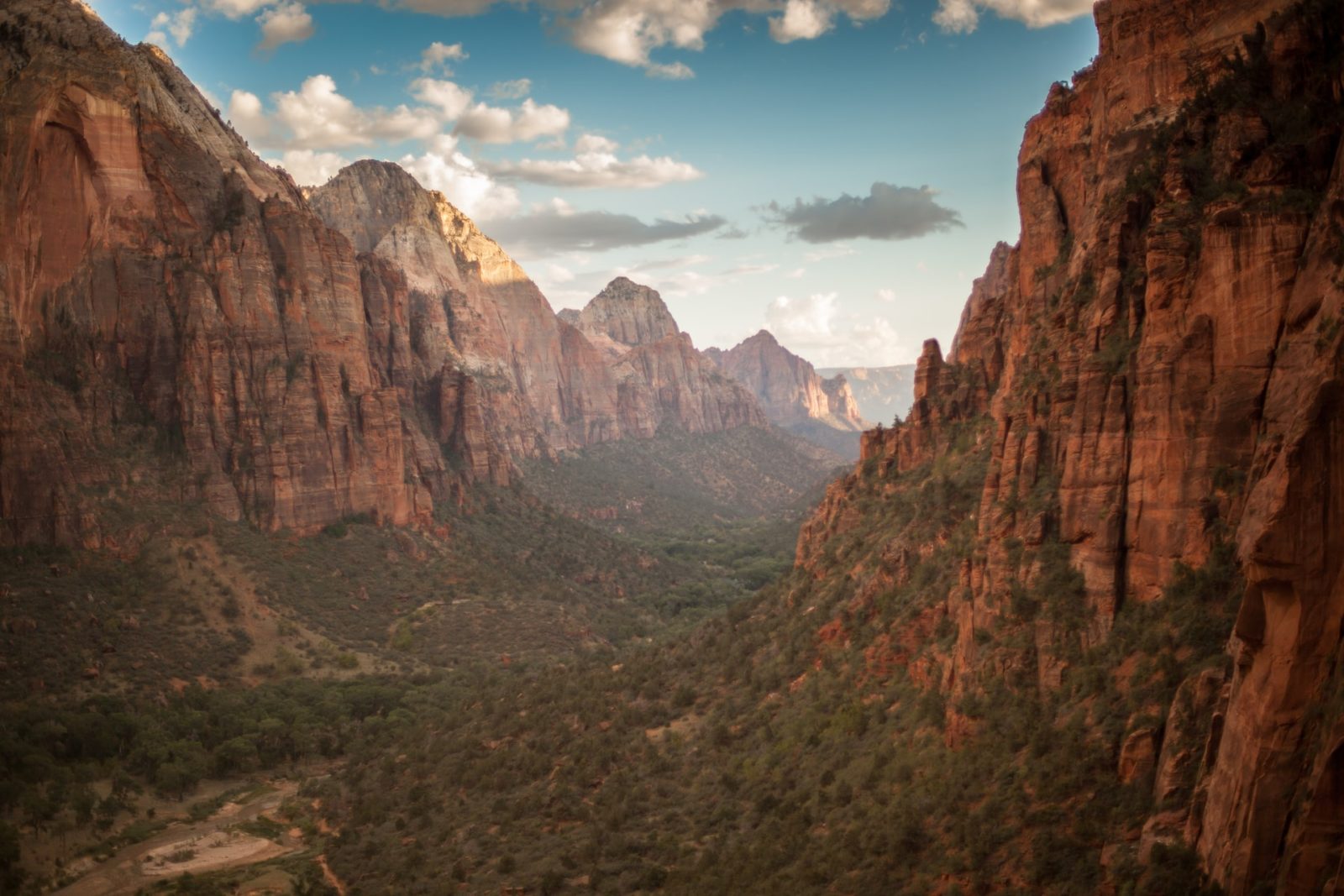 There is something majestic and spiritual about making your way through Zion. It’s almost as if someone opened a gigantic curtain and behind it was a production so immense and impressive that landscapes and scenery you once thought remarkable, before Zion, hardly justify the space on your memory card. The Narrows is as unique a hike as one would ever hope to find and the Court of the Patriarchs seemingly usher you into the park and remind you of its proud heritage. You can visit this park 20 times and have a different experience every single time.

Have a question for Bruce Lagman? 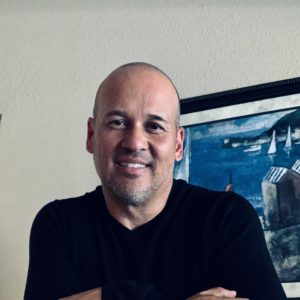 Bruce Lagman is a 50-something-year-old contractor from Phoenix, Arizona, by way of the glorious state of Wisconsin, who is currently between ex-wives. When he is not lamenting the fact that his last published work was in his high school newspaper (about the time Ronald Reagan was finishing his first term), he is mountain biking, stand-up paddleboarding, camping, learning photography, cooking, exploring, and admiring how well his adult children turned out despite his meddling. He has happily accepted the placement of the word "grand" in front of his previously rudimentary title of "father". He believes in the sanctity of adventure and the soul-satisfying powers of embracing the great outdoors while seeking out things that still make people say, "Wow." Like many, his first into-the-wild experiences consisted of making a tent out of a box fan and blanket at age five, progressing to his first real tent at age 15, which lead to a minimalist travel trailer, a spacious Class A gas motorhome, and an obnoxious Class A diesel coach, before landing where his allegiance shall reside evermore... a LTV Serenity CB24, or "Maggi" as she is affectionately known to her family. Bruce knows there are at least 100 years of things left to see in this fine land and only about 50 years left in which to see them, so off he goes...