Hello! We are Mike Markowski and Terry Denson. We own a 2022 Wonder Rear Lounge AWD, which we use primarily to boondock. While it seems shocking to some at our age that we live for traveling as much as possible, it has become our way of life. Our home is always with us, and the freedom to travel allows us to feel like we are living large before our “use before” date reaches. 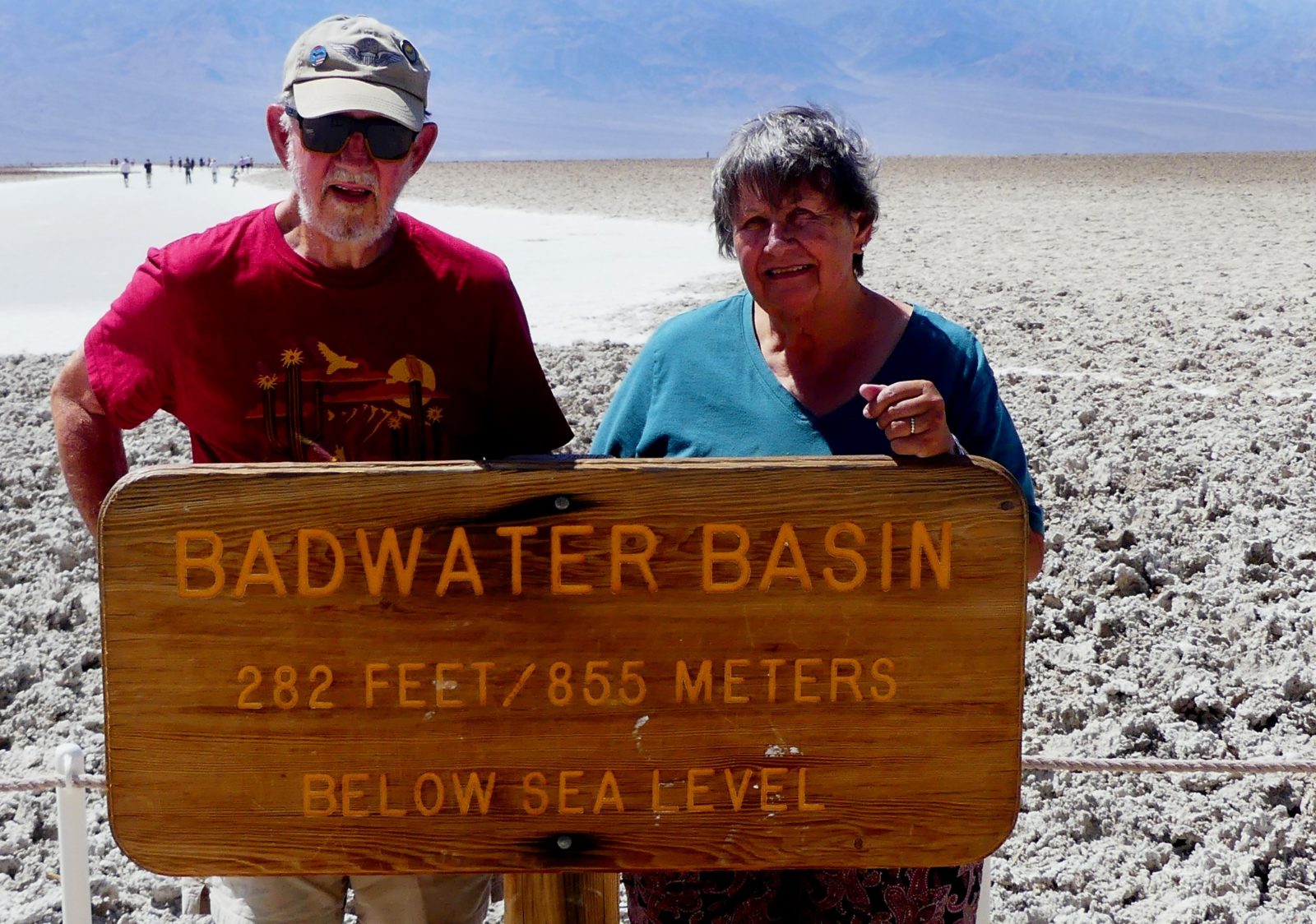 Both of us are veterans. Mike is a retired Army aviator, and Terry served 16 years on active duty and in the Army National Guard as a full-time public affairs officer before returning to active duty. We met while attending a U.S. Army training course in Fort Ord, California. When we finished the course, Mike’s assignment was to St Louis, and Terry’s was to Portland, Oregon. One year later, Mike retired and moved to Portland in his Midas Mini Class C, and we were married.

Terry was reassigned to Edgewood Arsenal in Maryland soon after, so we loaded up the RV and drove our first cross-country trip. At the time, we were passionate about sailing. We both learned to sail in Monterey, and Terry had owned two small sailboats while in Oregon. We took the opportunity to expand our sailing experience on the Chesapeake Bay, first with a 33’ Hunter. We enjoyed sailing so much that we decided to do it full-time. We bought a 42-foot Slocum sailboat, named it Door Into Summer, and moved aboard. We lived on the sailboat for eight years while working as civilians to build our full-time cruising kitty. We finally set sail to cruise the east coast of the United States, the Caribbean Islands, part of South America, and Central America for five years. 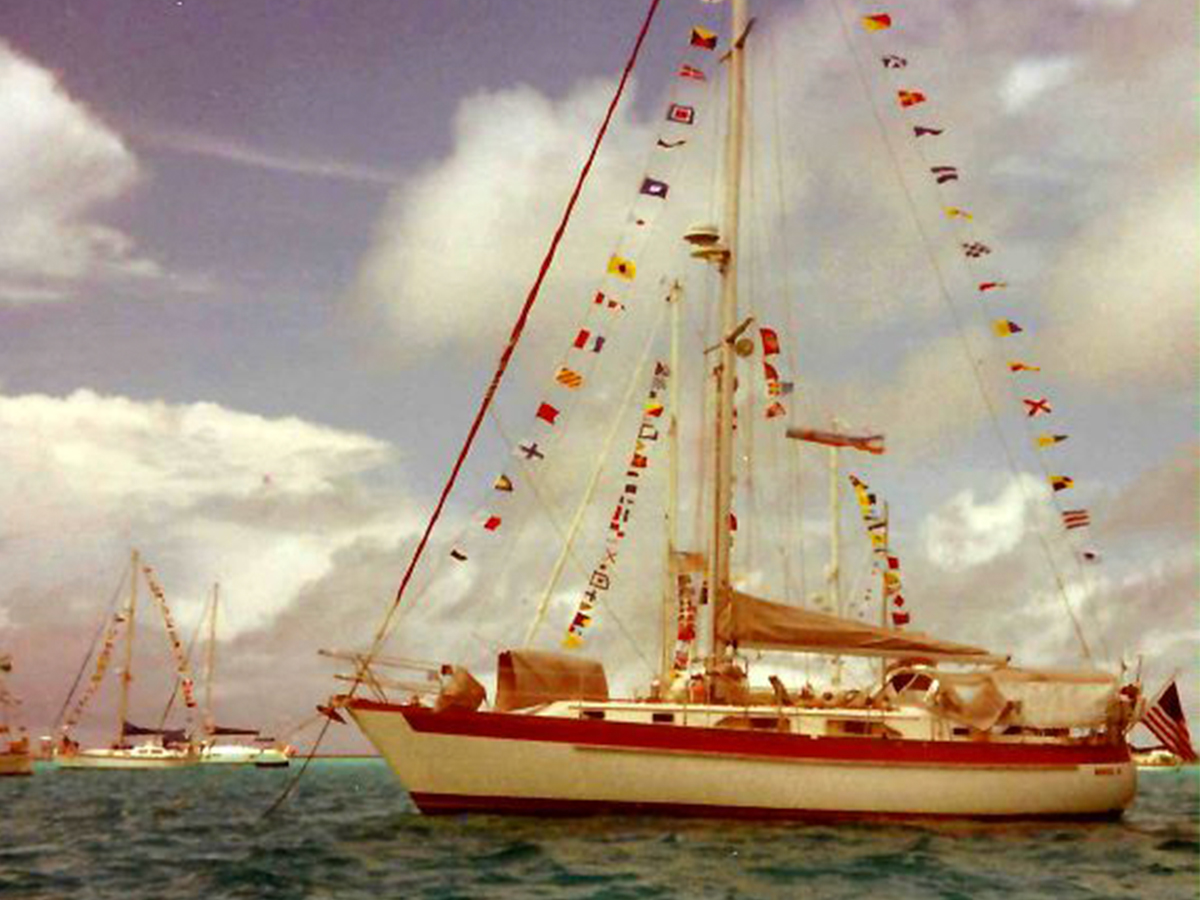 We acquired skills that were very useful when we moved back to RVing. Self-sufficiency was primary: there are no mobile techs on the ocean. We learned how to live together in a small space, plan stops, and provisioning. We paid close attention to our environment by knowing current and future weather forecasts and keeping up on security and safety issues.

After returning to the U.S., we lived on the sailboat for another two years before buying a house. Mike put his boat equipping and avionics skills from the military to use and started a marine electronics business specializing in preparing cruising boats. Terry became an artist and began selling her paintings at outdoor art shows. At first, we stayed in hotels and faced all the issues that come with that. We noticed many other artists were using RVs to attend shows, and there was usually a free boondocking area available, so that led us to buy another RV. 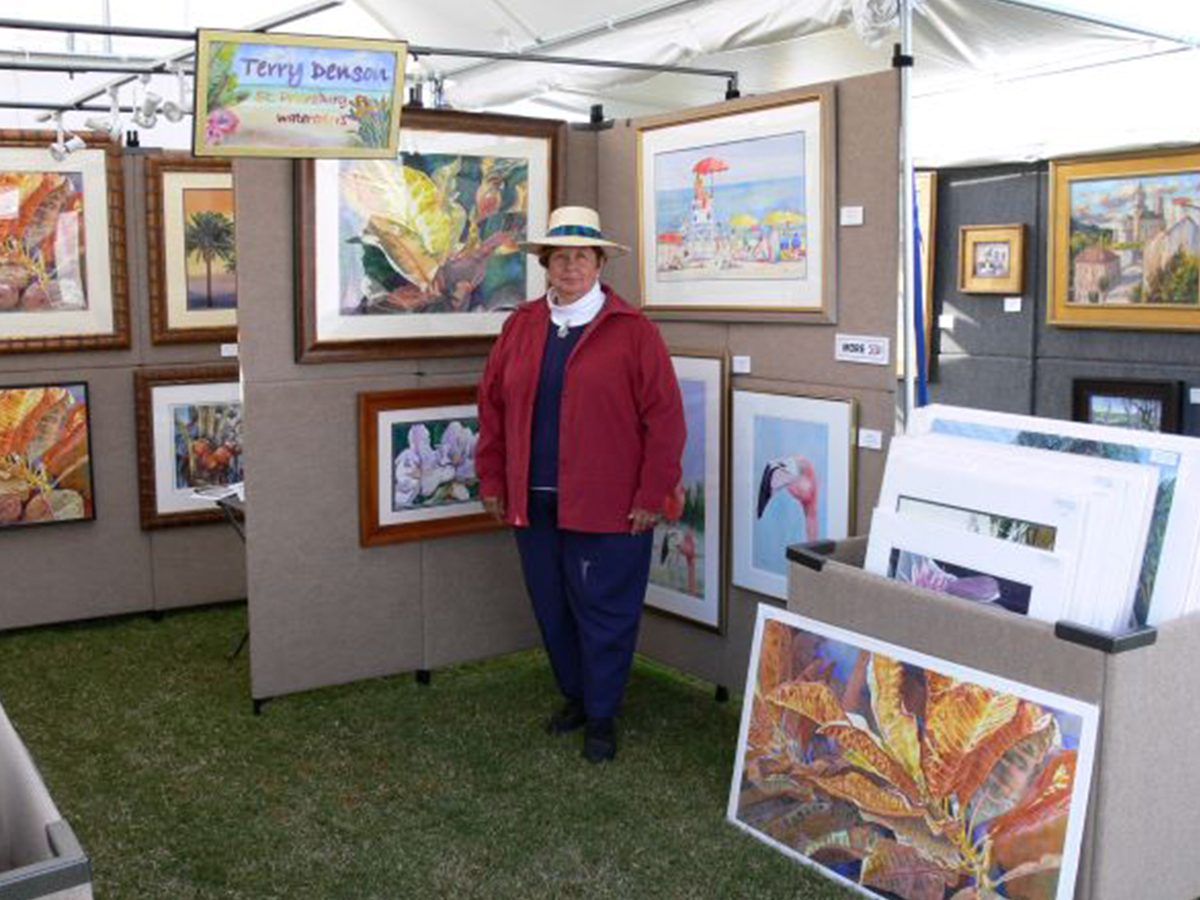 We have owned six motorhomes in the 40-plus years of RVing ranging from a V.W. pop-top, a Class C, a Class A diesel pusher, two Class Bs, and now our Wonder Rear Lounge AWD. We returned to RVing by buying the diesel pusher to attend the art shows where Terry displayed and sold her work. 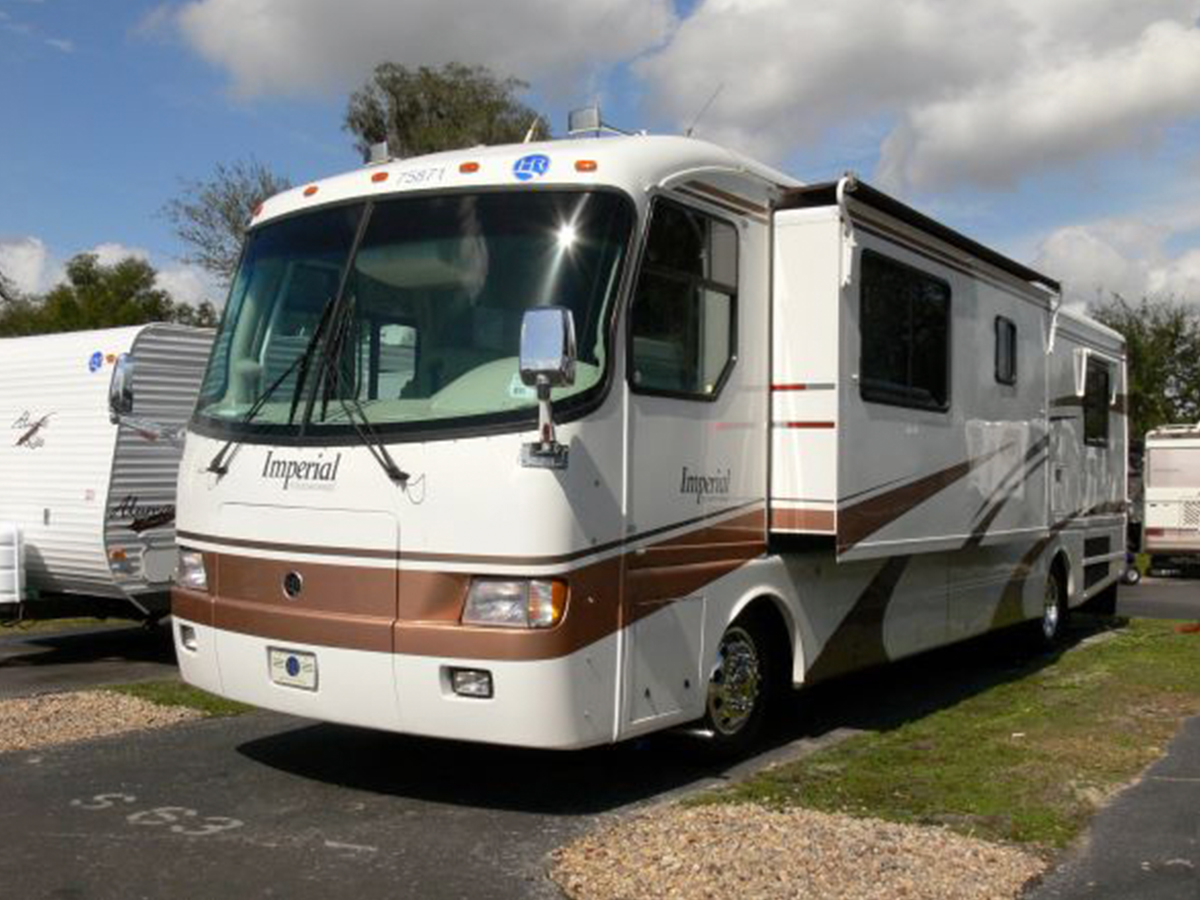 We quit the art show circuit during the Great Recession and sold the Class A. We were without an RV for several years but decided we wanted to start traveling again. In Travato, we found a used Class B and traveled from coast to coast in it. Terry became active in several art organizations, showed her work in galleries, and taught art classes as well. 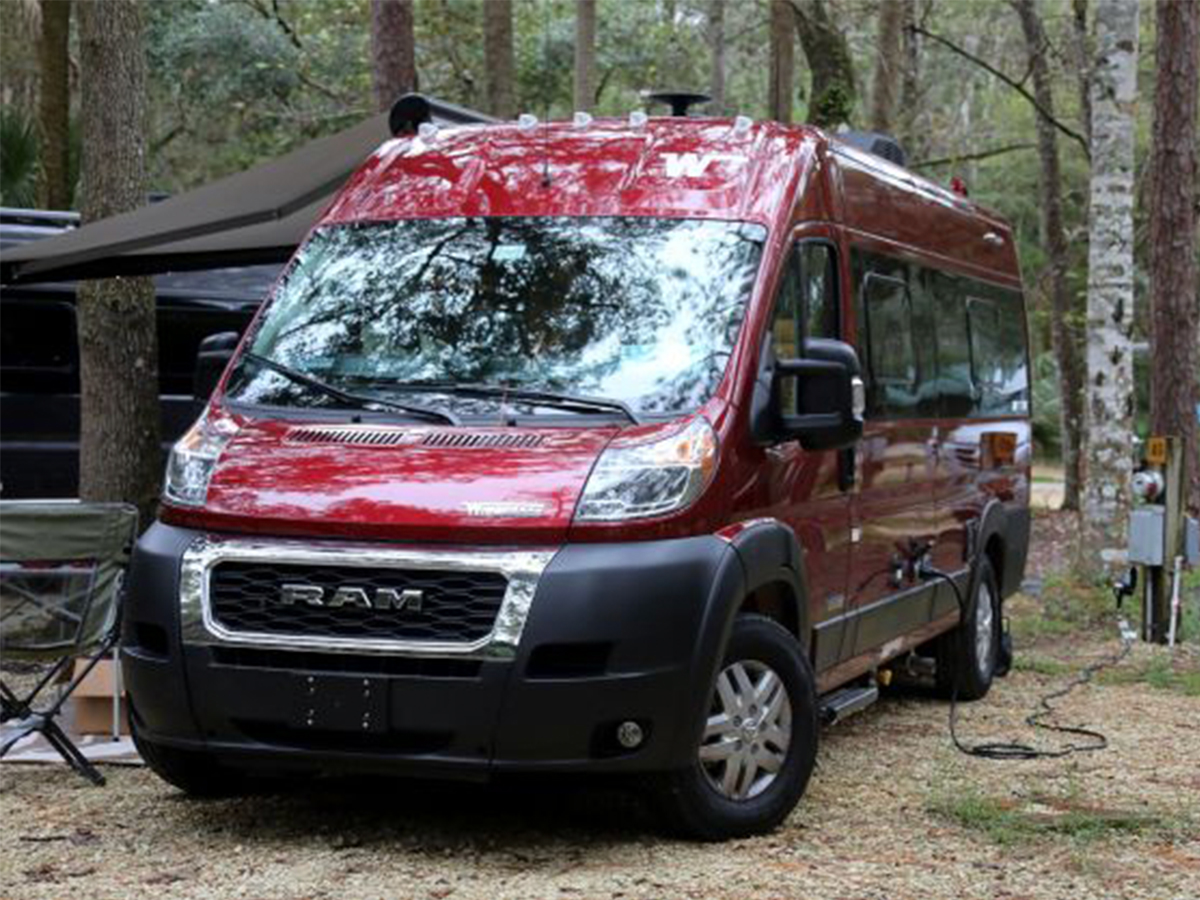 Mike was busy running the marine electrical business, so available time cut our travels severely. Rather than have our Class B sit in the driveway, Mike started to rent her out through a couple of peer-to-peer agencies, which became very successful. Later it became apparent that we wanted to have an RV that we could use ourselves, so we purchased a new Class B. After this purchase, Terry became president of the Florida Watercolor Society, which effectively took away any RVing time we had once again, so Mike added the 2020 Class B to the rental “fleet,” and both RV’s stayed rented constantly.

When Mike retired from the marine electrical business, we decided to go RVing full-time and thus began the search for yet another new RV. Our thoughts were a Class B was too small for full-time living, and our research led us to Leisure Travel Vans and their reputation for quality. We loved the layout of the Wonder Rear Lounge since it provided each of us with a workspace. We then placed an order in June 2020. 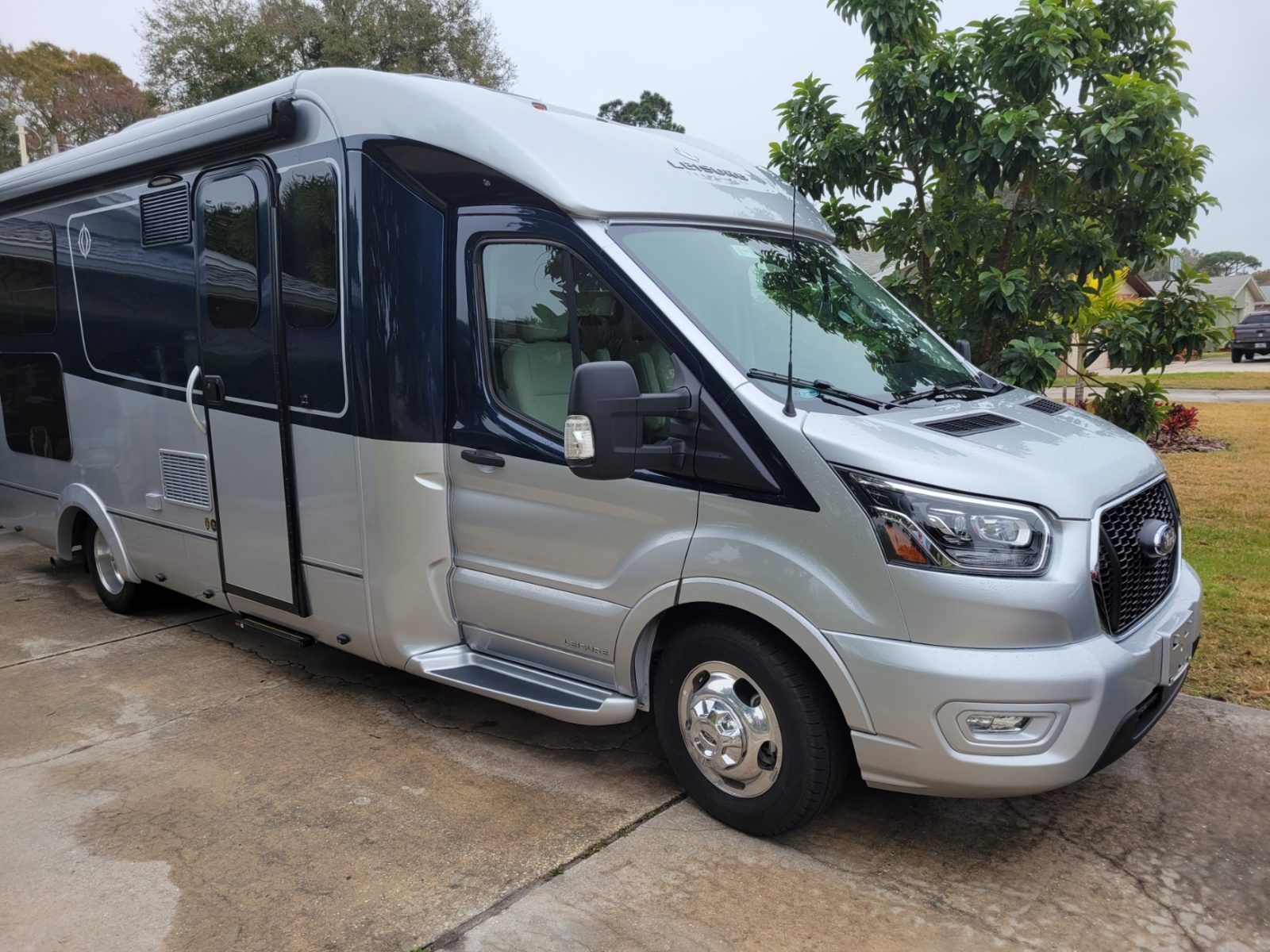 We took delivery of the unit in January 2022 and began full-time traveling in February. We lived in St. Petersburg, Florida, so we headed west along Interstate 10. After visiting friends in San Antonio, we began weaving our way west, stopping at Amistad Reservoir and Big Bend National Park. We stopped at most of the National Parks in New Mexico and Arizona, plus state parks and boondocking sites. We also spent several weeks boondocking in the Mohave Desert, then visited all the desert National Parks in California before heading up the east side of the Sierra Nevada. 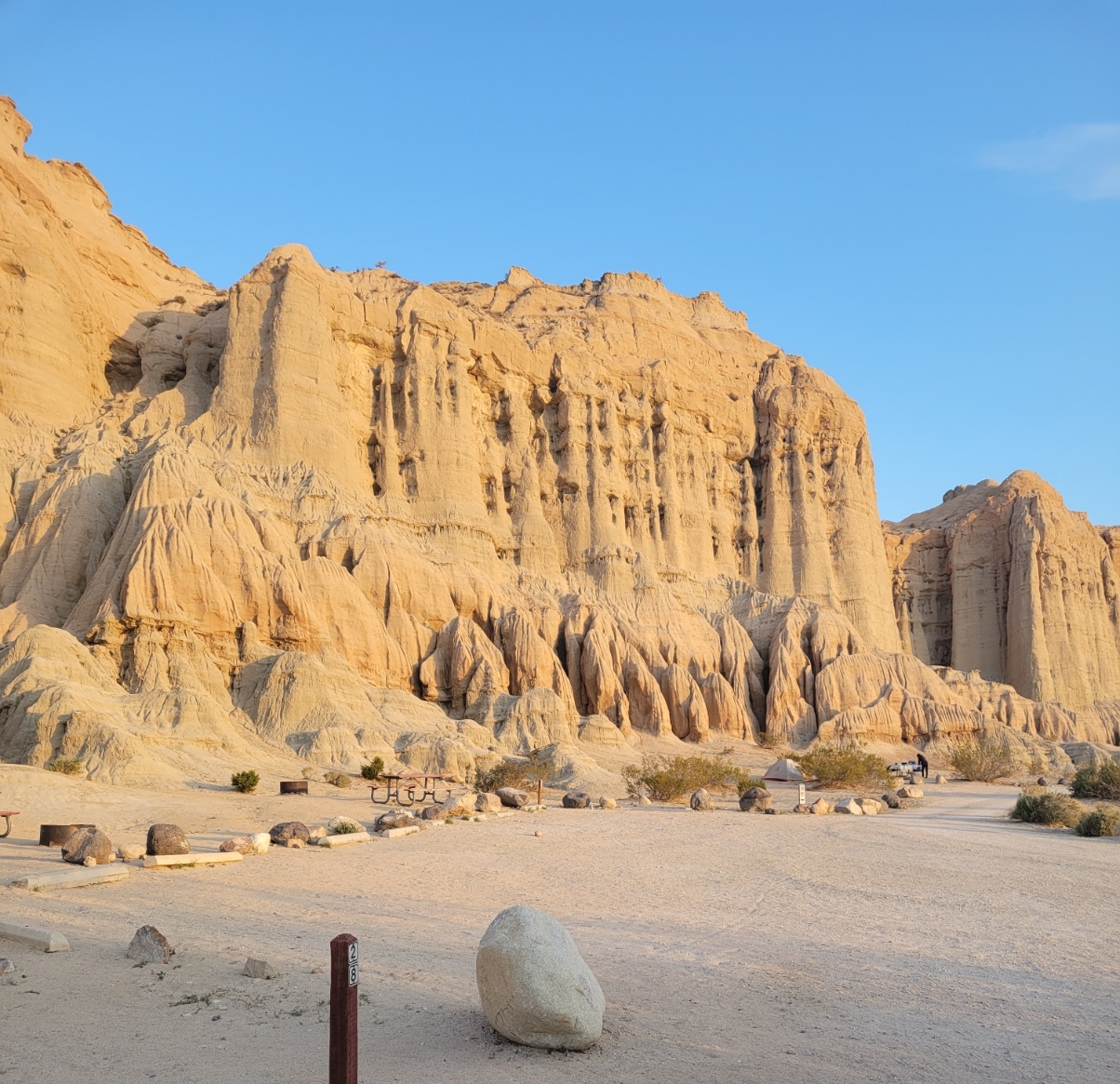 We wandered through northern California, eastern Oregon, and Idaho, stopping at National Parks and monuments, BLM (Bureau of Land Management) campgrounds, and dispersed camping sites. Grand Teton National Park was also a destination we visited. Due to record flooding, the park canceled our reservation in Yellowstone, but we did manage a day trip. In central Wyoming, we spent time at BLM campgrounds and boondocking sites before detouring through northern Utah. The next tops were north. Nebraska and North, and South Dakota provided a tour of the Black Hills and the two Theodore Roosevelt National Parks. 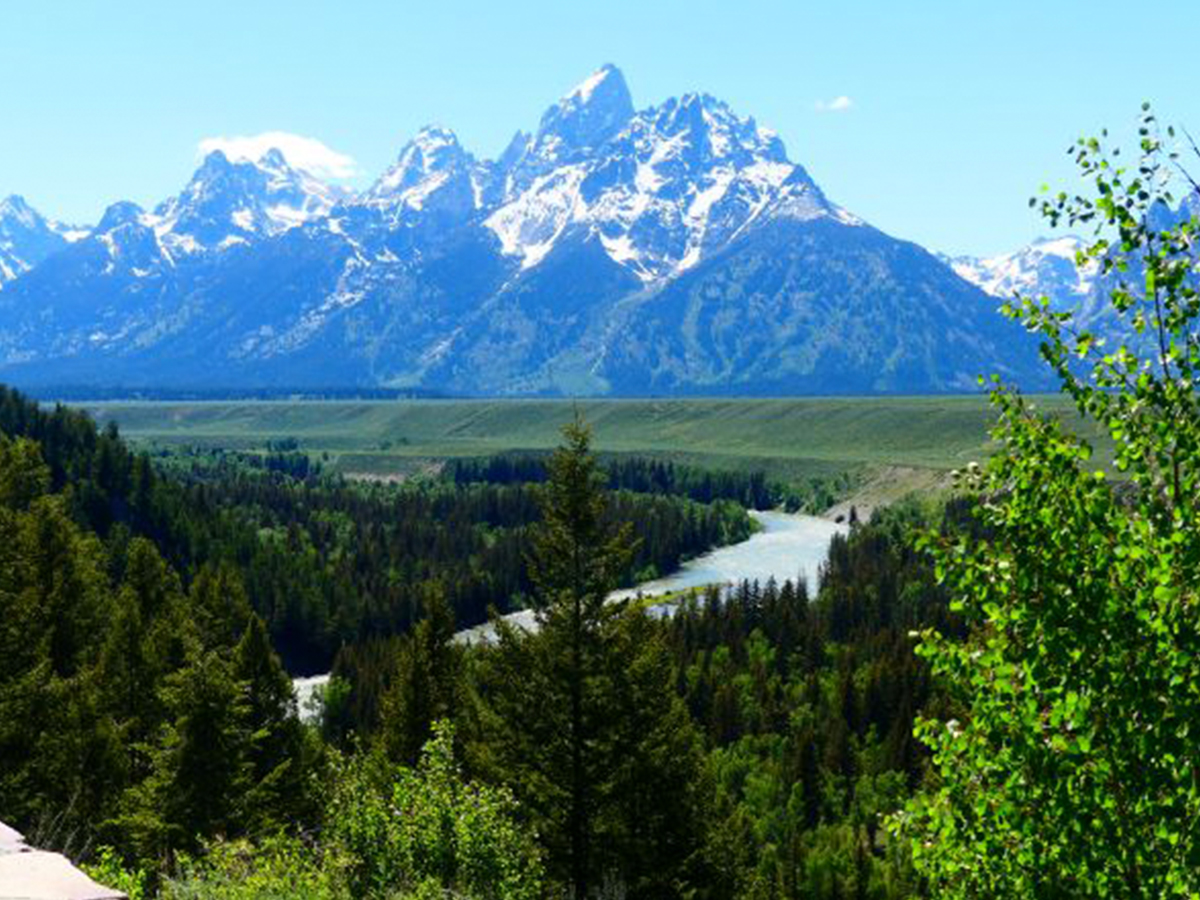 Grand Tetons and the Snake River

Following the LTV Rally in September, we will head south down the Great River Route and spend several months in Florida checking on our house and meeting friends and family. Next year we are off to the Canadian Maritime Provinces. Mike has family in Maine so we will stop there. The Adirondacks and the Upper Peninsula of Michigan are on the list. We may head through western Canada the following year and spend some time in Colorado, Utah, northern Arizona, and New Mexico another year. So many places, so little time.

We prefer to boondock when we are able rather than stay in campgrounds. When we stay in campgrounds, they are often more primitive BLM, national forest, or Corps of Engineer campgrounds. Mike installed six hundred watts of solar and 600-amp hours of lithium batteries to make boondocking easier, and this system has worked flawlessly.

We also tow a Mini Cooper with our Wonder. Our usual strategy is to camp in one spot and use the Mini to tour multiple attractions. It is much more economical than driving the Wonder to tour different spots.

As seniors, we don’t get around as well as we wish we could. The RV has been our magic carpet to easily move from place to place while having all the comforts of home. If we want to play tourist, we can do that. If we are tired after playing tourists, we can chill at home, as our house is always with us. Mike is constantly looking for equipment to maintain or upgrade on the Wonder. It has provided Terry with countless subjects to paint, but conversely, it limited her time and working space to paint and changed her marketing method as well. 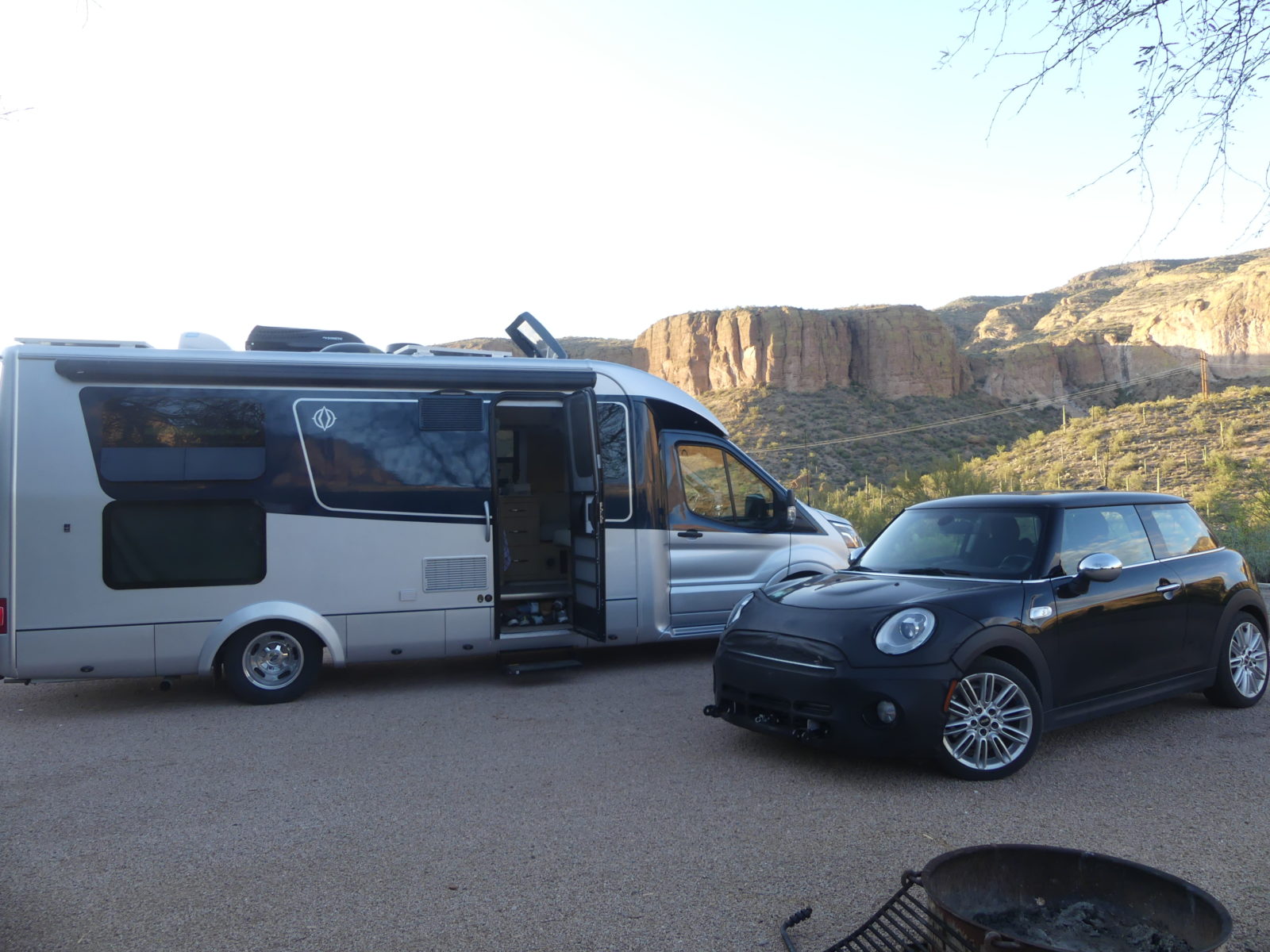 All in all, we are so grateful to have a home on wheels that lets us experience the world. We had the chance to attend the LTV Rally in September and received the most generous gift from an anonymous employee at Triple E, which was a gift card to enjoy a restaurant called Chicken Chef. It truly was a special treat to enjoy. If you’re ever considering, please buy a Leisure Travel Van to get out before your “use before” date.

Have a question for Mike Markowski & Terry Denson? 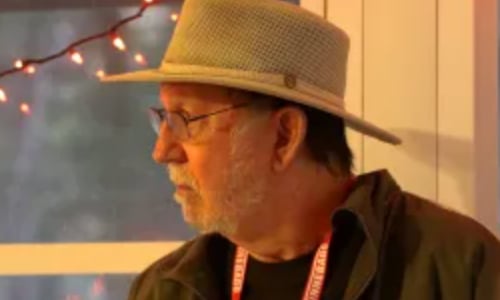 I am a retired Army aviator where I flew Chinook helicopters and I served two tours in Vietnam. After retiring from the army, I spent ten years at a Baltimore utility and then quit my job to go sailing with my wife. We spent six years cruising the east coast of the U.S. and the Caribbean before settling down in St. Petersburg, Florida.