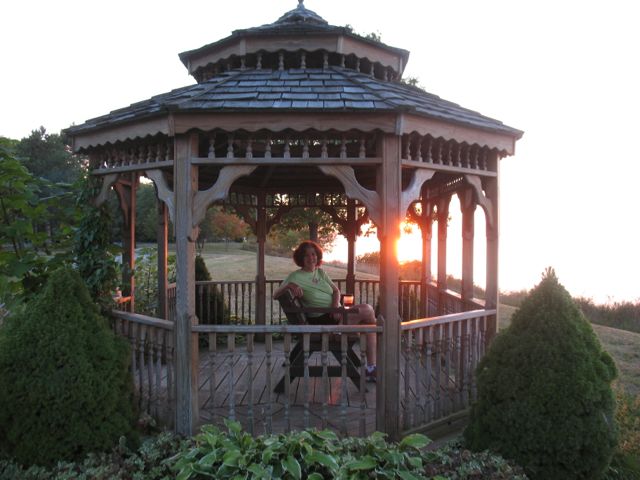 Our decision to travel along the northern coast of New York proved to be an excellent one.

The first State Park we stopped at was a true gem. Although it was one of the tiniest parks we’ve ever encountered, with only 50 sites, Golden Hill was thoughtfully planned out, so that every spot had a great view. 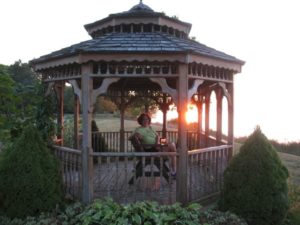 Because it was past Labor Day and the crowds of summer were long gone, we had our pick of sites. We chose one right on Lake Ontario where I could have my morning coffee and evening glass of wine sitting peacefully in the charming gazebo right outside our door.

We had just arrived when the camp host invited us to watch the blazing sunset from the Thirty Mile Point Lighthouse, another of the park’s unique features. After at least five major shipwrecks in the area due to the treacherous rocky shoals and shifting sandbars of the Lake, the Lighthouse was built in 1875. The tower’s navigational light could be seen from 18 miles away, giving sea captains the ability to identify the shoreline location. 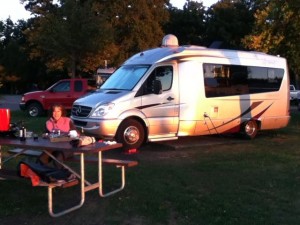 If you would like to step back into the 19th century, you can even rent the lighthouse attendant’s quarters, which have been fully restored by the Friends of Thirty Mile Point.

Manny and I are usually on the move, staying one night or two at each location. Golden Hill State Park, however, was a special place, one where we luxuriated for four whole days.

Further north, we stopped at another New York treasure, Cedar Point State Park. One of the oldest State Parks in New York, it was established in 1897. 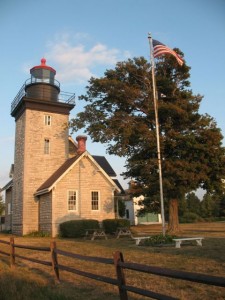 Once again, Manny and I were graced with a terrific campsite.

As we sat by our campfire enjoying the evening air, we could almost reach out and touch the huge freighters as they thundered up and down the mighty St. Lawrence River.

For the full story, see http://2adventurers.com/america/new-york-state-parks/nggallery/