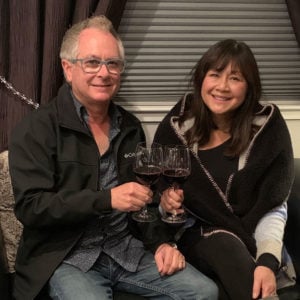 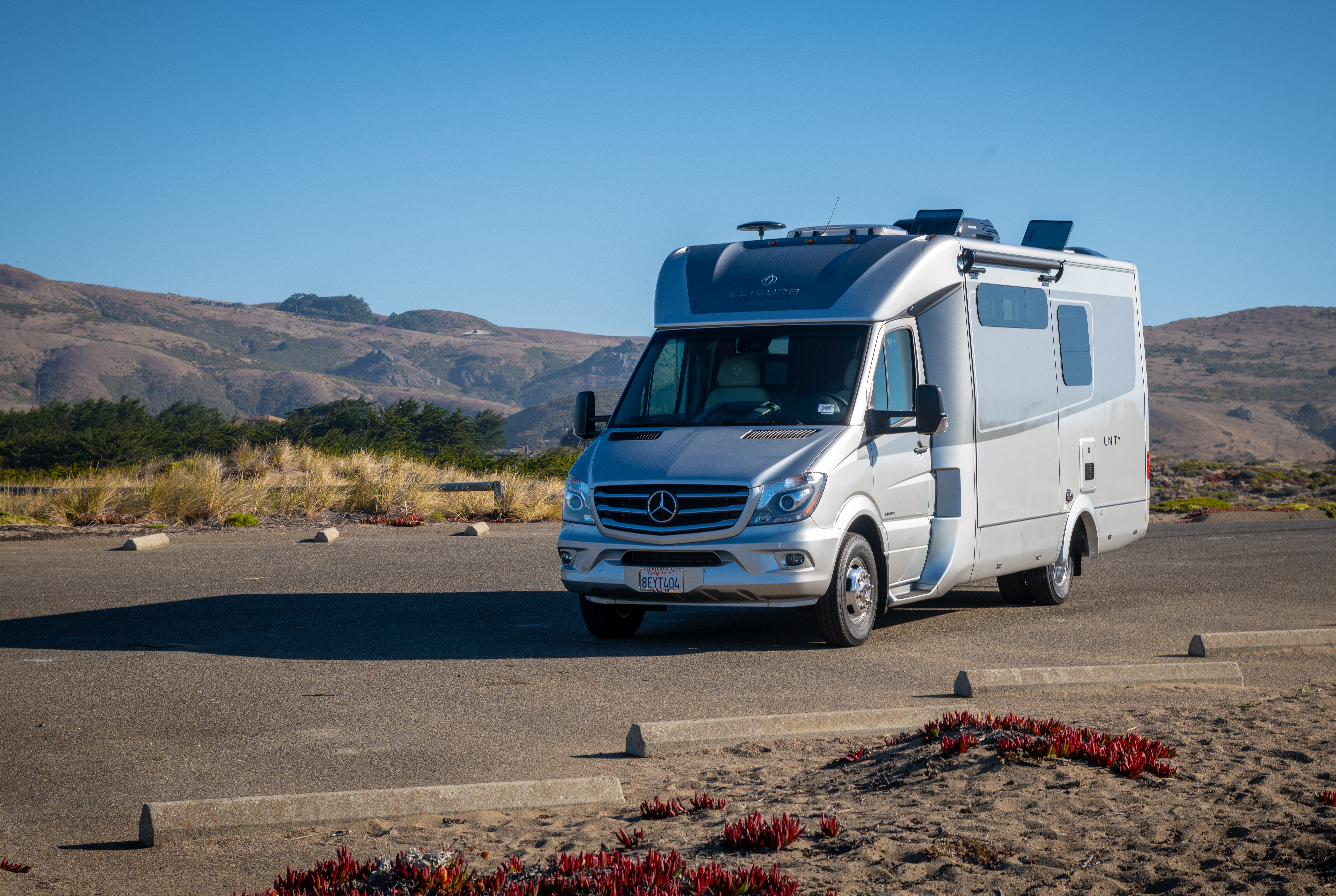 Editor’s Note: This post is written by a member of LTV’s sponsored content team, the Explorers. Do you own a Leisure Travel Van and enjoy writing? Learn more about joining the team.

The jaw-dropping beauty of the North Coast of California never ceases to amaze Susan and me. A drive most anywhere along Highway 1 elicits exclamations of wonderment. There is ruggedness and sublime drama, especially in the winter. Yes, it’s a bit remote in places, and the residents must be more self-sufficient than city folks. We saw many churches, schools, and essential services, but medical specialists and hospitals were two hours away. The Sonoma, Alexander, and Anderson Valleys are well known for their wines. There are good restaurants and seafood to buy, breweries, a number of commercial and state campgrounds, Redwood forests, lighthouses, a Skunk Train, whale watching, and even a cool radio station, KOZT in Fort Bragg, spinning great classic rock. Our LTVs make for a perfect way to explore the North Coast. Most recently, on a trip to Mendocino, we met up with friends who own a 40′ diesel pusher with Jeep in tow, and they had a challenge dealing with the tight Highway 1 twists and turns. The driver said he was ready for a whiskey when they arrived at our campground, and he doesn’t even drink! 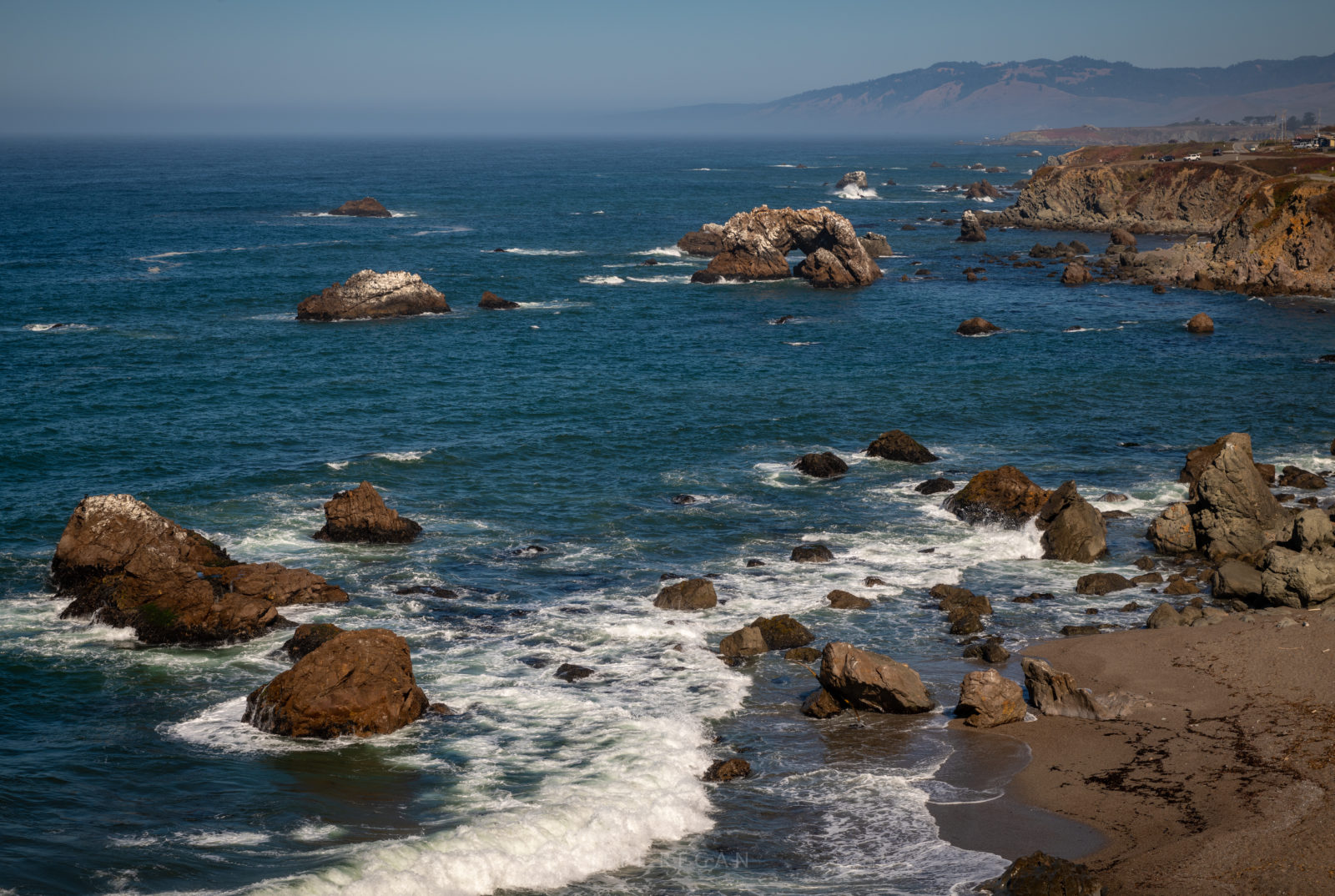 Bodega Bay is just 40 miles north of San Francisco. We stayed at Bodega Dunes State Park, which features a long beach close to Bodega Harbor. Our site was conveniently right across the street. Many boats were moored on wooden docks, and you’ll find amazing restaurants, including a little house called Spud Point Crab Company that served the best take-out clam chowder and sourdough bread. Both were fantastic on a crisp fall day. The village of Bodega Bay sits on the east side of the harbor. At the mouth of the harbor is a county RV park with beaches called Doran Regional Park, which has impressive 360-degree views of the bay and harbor. Alfred Hitchcock shot The Birds here in 1963, much to the Chamber of Commerce’s chagrin. 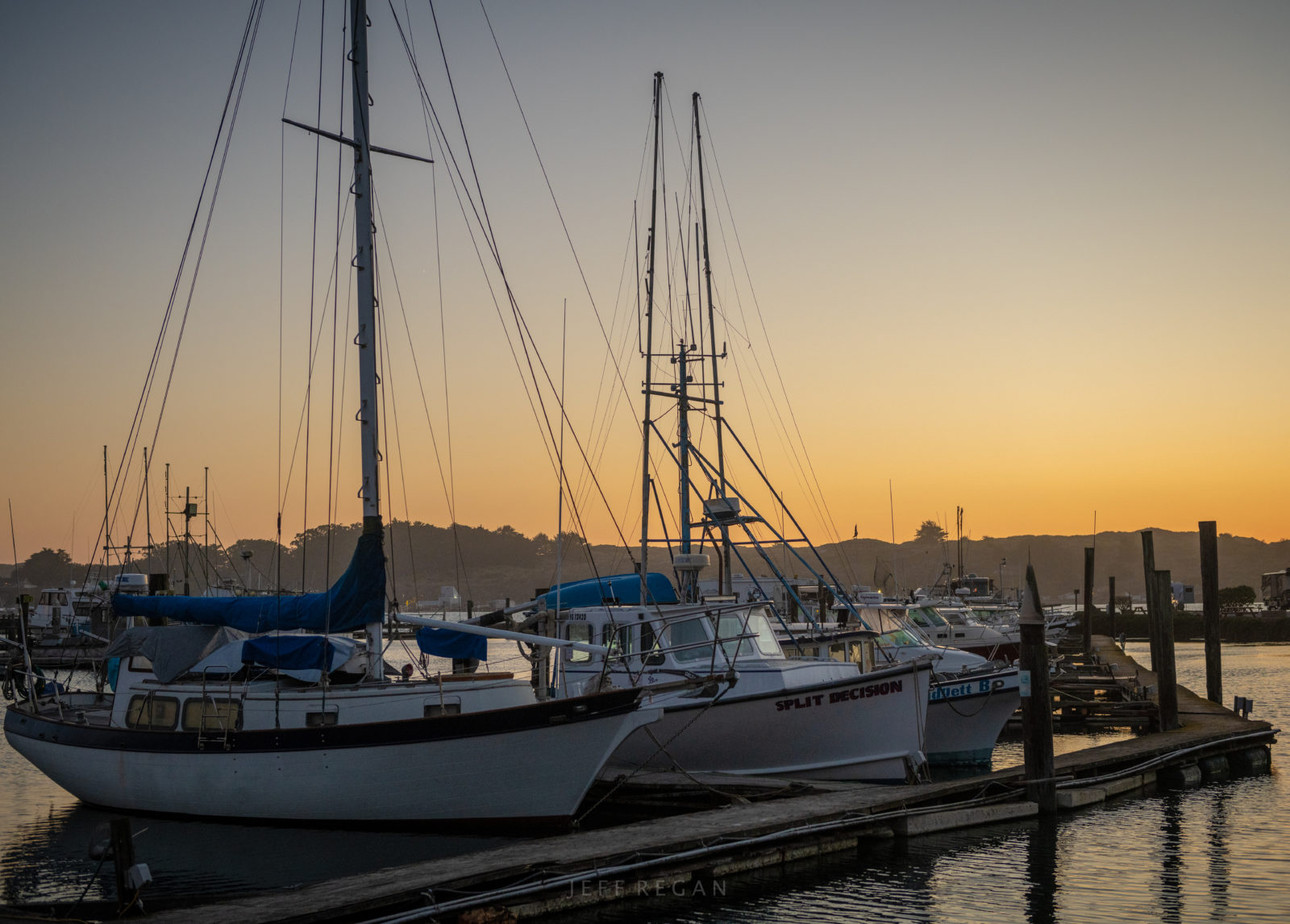 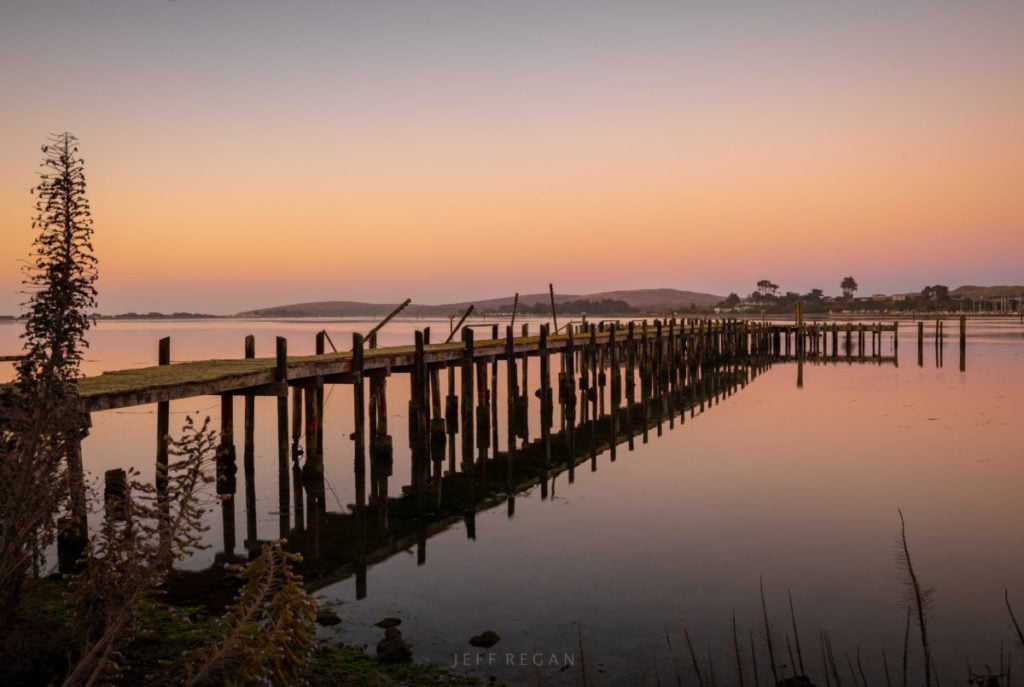 Gualala, named after the Kashaya Pomo village name, Walaali, comes from the phrase “ak kha wa la lee,” meaning “where the water flows down.” Indeed, the river goes out to the ocean from the center of town to a huge sand bar. Colonized by the Spanish and Russians in the 1800s, it became a logging town. What is now Highway 1 began construction in 1920. Horses were still used extensively due to mud and steep grades, making it difficult for cars. Imagine what the residents from the early 1900s would have thought about an LTV motorhome to get around in. We stayed at an RV park called Anchor Bay Campground, right near the beach, providing incredible ocean views. Lush Redwood forests grow right up to the coastal bluffs. There are a couple of small shopping areas, a wooden Russian onion-domed building that is a hotel, and a restaurant called St. Orres; we highly recommend this restaurant that we’ve dined in since before becoming RVers. 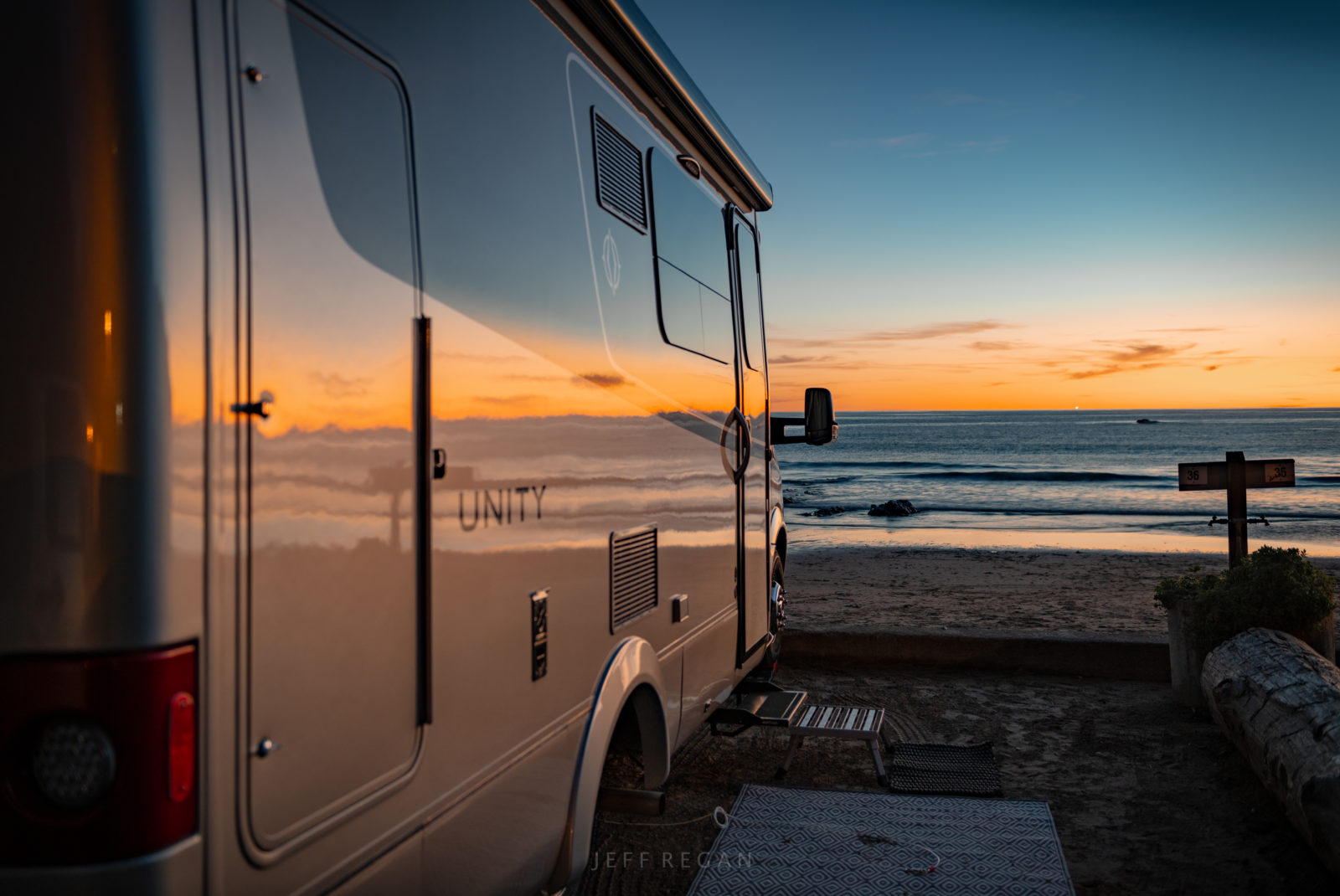 A fantastic RV site (no hookups) at Anchor Bay, in Gualala. 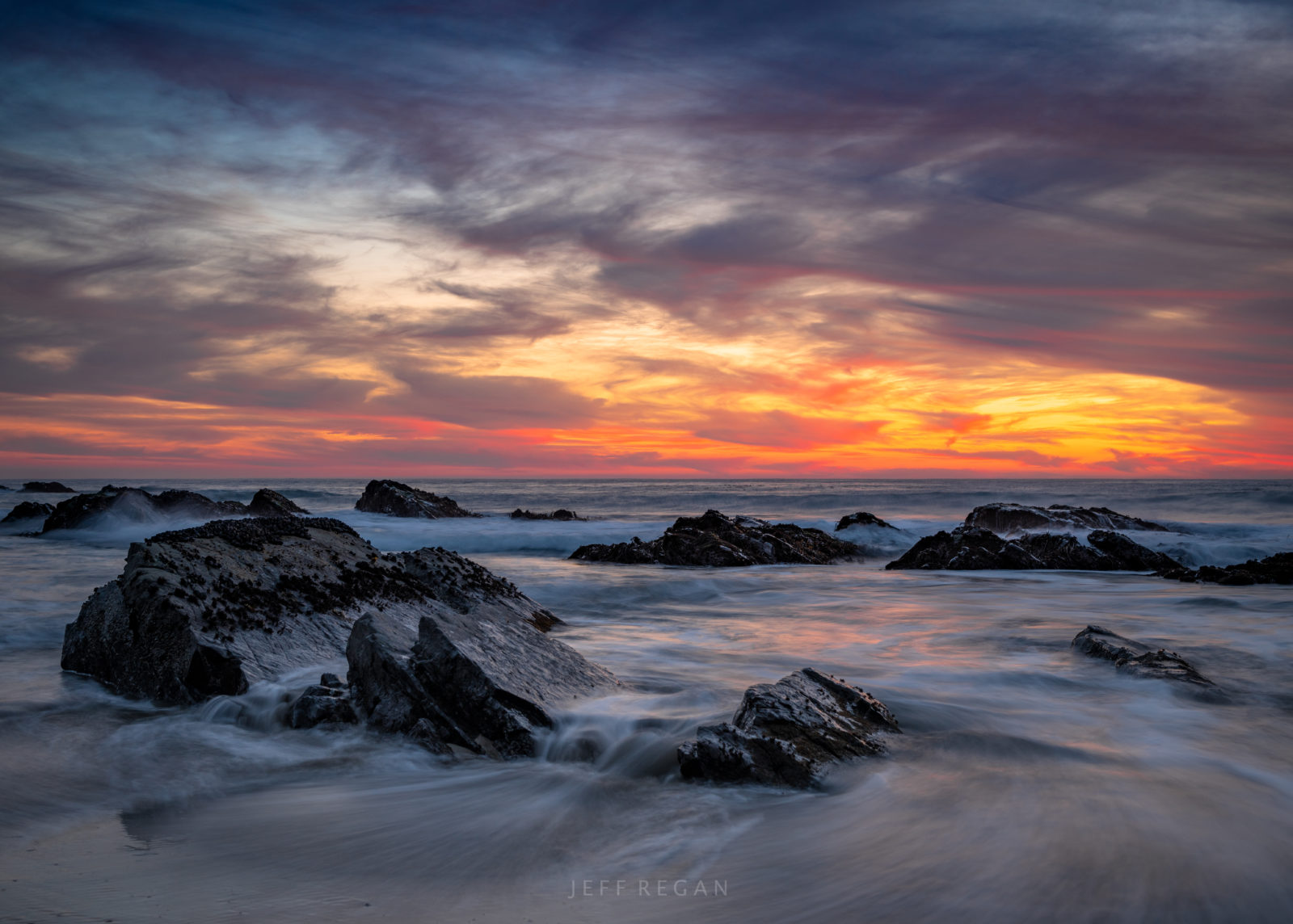 Sunset views a couple of hundred feet from our site at Anchor Bay.

To the north of Gualala is Point Arena, originally called Punta Arena. The first European to record Point Arena was Spaniard Bartolome Ferrer in 1543. Its main street is part of Highway 1 and was associated with 1960s hippie and later counterculture groups. Point Arena Lighthouse was first built in 1870, then torn down after the 1906 San Francisco earthquake and rebuilt by a smoke stack builder. It is tied as the tallest lighthouse on the west coast of the US and is the closest location on the mainland to Hawaii. The 115′ lighthouse features a first-order Fresnel lens at over six feet in diameter and weighing more than six tons, consisting of 666 hand-ground glass prisms built in France. Nearby is Schooner Gulch State Beach, known for its geological oddities. One such example is Bowling Ball Beach, where at low tide, large bowling ball-shaped rocks can be seen in the surf. 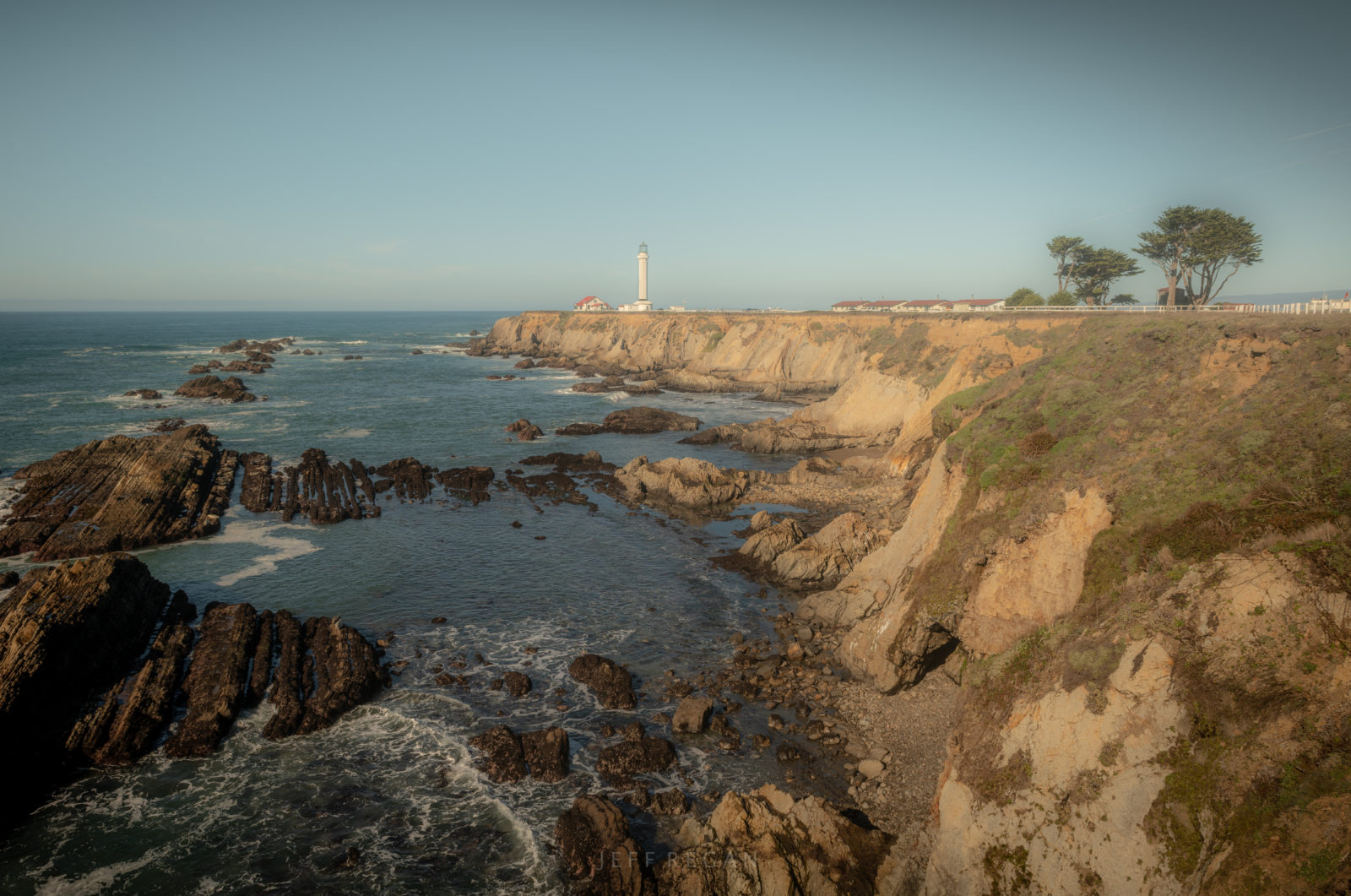 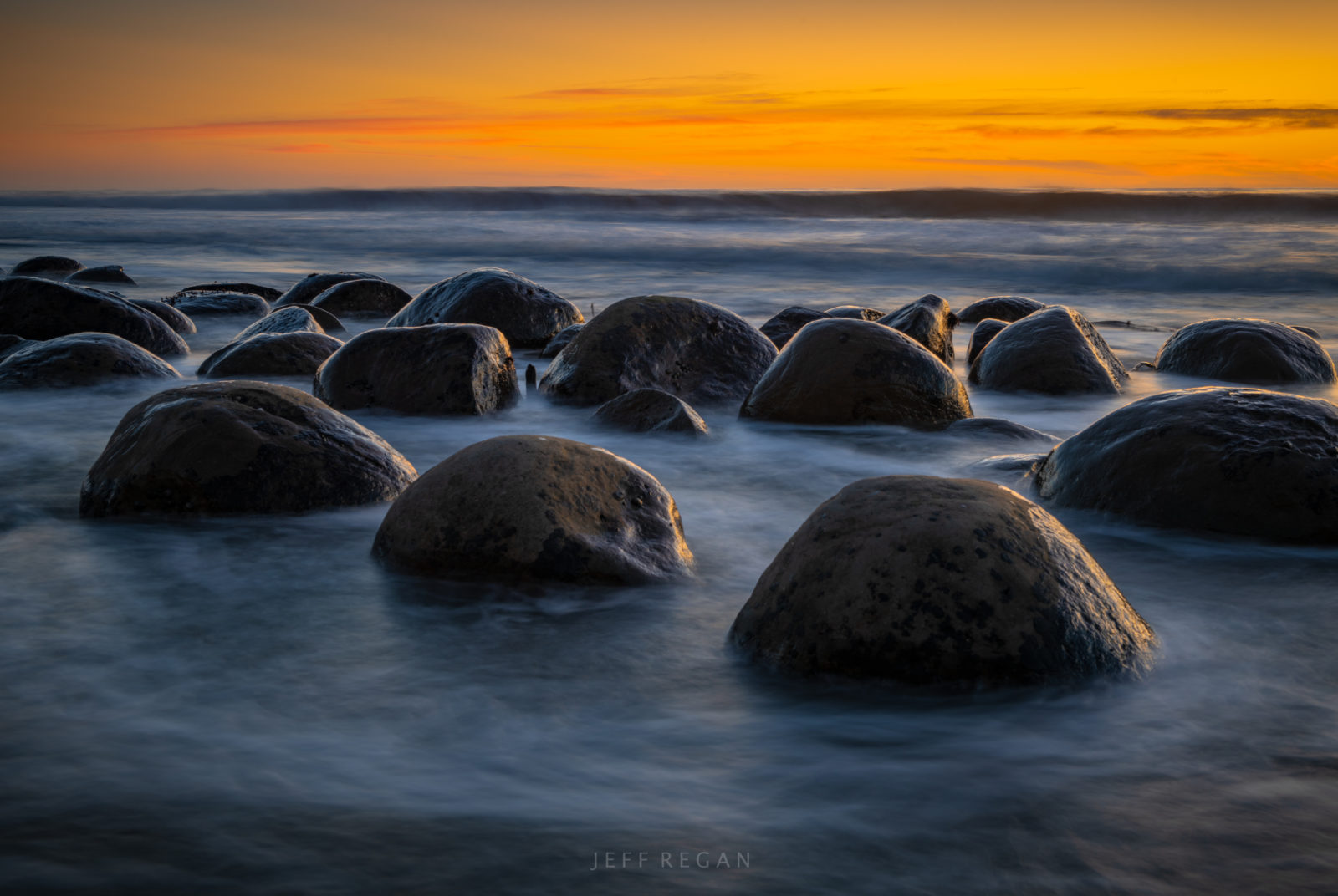 Salt Point State Park is a 6000-acre state park in Sonoma County, north of the town of Jenner, with 6 miles of rocky coast. The constant impact of the waves forms the sandstone rocks into many shapes and features the first underwater preserves in California. There is also easy hiking for miles amongst the coastal brush. There is RV camping on both sides of Highway 1, with the east side being a bit more sheltered from the wind. When we visited in the winter, only about 10% of the sites were taken. 20 miles of hiking and bike trails, scuba diving, kayaking, and fishing are some recreational activities available. Tide pools provide views of marine life, a visitors center, and some picnic areas are all available. Gerstle Cove is a protected marine reserve. The rock formations and sunsets are memorable, and I recall climbing up high on rock formations over the ocean and the resulting photos not reflecting my courage! Spanish for “of Mendoza,” this scenic town is extremely popular as an artists’ colony and with vacationers. Many of the early settlers of the timber town were New Englanders, as well as Portuguese fishermen and immigrants from the Canton Province in China. The economy declined after 1940 but was revitalized in the late 1950s with the founding of the Mendocino Art Center. Since 1987, Mendocino has been the site of the Mendocino Music Festival. The TV series Murder, She Wrote with Angela Lansbury was set in the fictional town of Cabot Cove, Maine. Some show episodes were filmed in Mendocino, and exterior shots were used throughout the series. It was also depicted as Monterey in Steinbeck’s 1955 East of Eden, starring James Dean. We ate breakfast at Flow, which had great sun-drenched views, and Trillium for lunch, which had great food. We stayed in nearby Caspar, where the Caspar Beach RV Park had a beach cove across the street and the town of Fort Bragg just to the north. 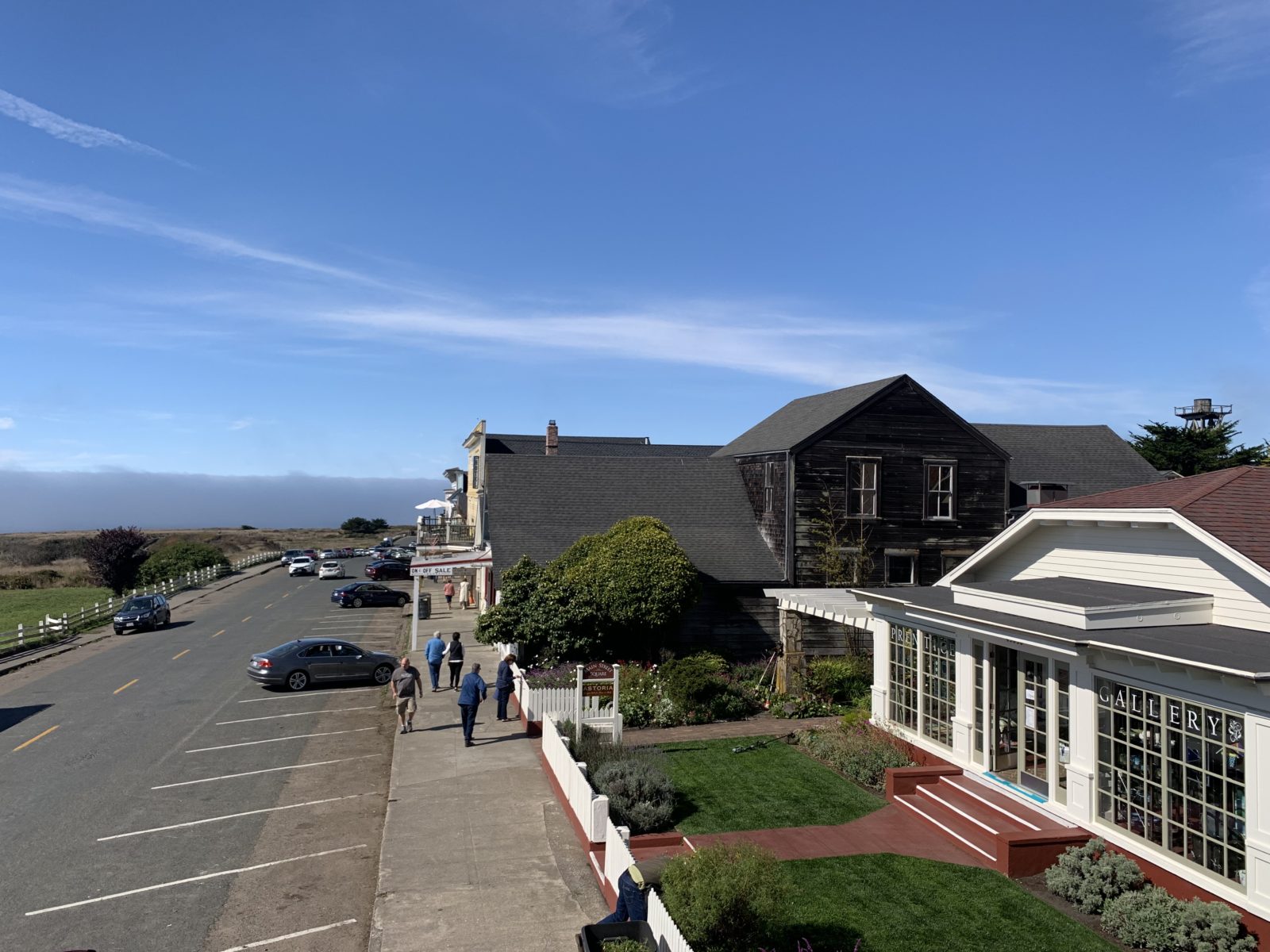 Morning view in Mendocino. Plenty of parking for RVs on the left side of the street. Lots of water towers in Mendocino.

Although named after Portuguese explorer Joao Rodrigues Cabrillo, who voyaged on behalf of Spain, he never got near this area by ship or land. The 1909 Point Cabrillo Light Station is only 32′ above the ground, but the height of the headlands raises it to 81′ above sea level and can be seen some 15 miles out to sea. The third-order Fresnel lens has four panels containing 90 lead glass prisms weighing 6800 pounds, constructed in England. Tours of the lantern room are given, but a US Coast Guard representative must be present. The 2001 movie drama The Majestic, starring Jim Carrey, featured this lighthouse. We visited this light station twice at sunset via foot from the visitor’s parking lot, through a dirt trail to take photos. Then, the next day, my two travel friends wanted to go via their new E-Bikes. My bike was just an M-Bike, “M” for manual. I had the last laugh when one of the E-Bikes batteries died! Ahh, technology. 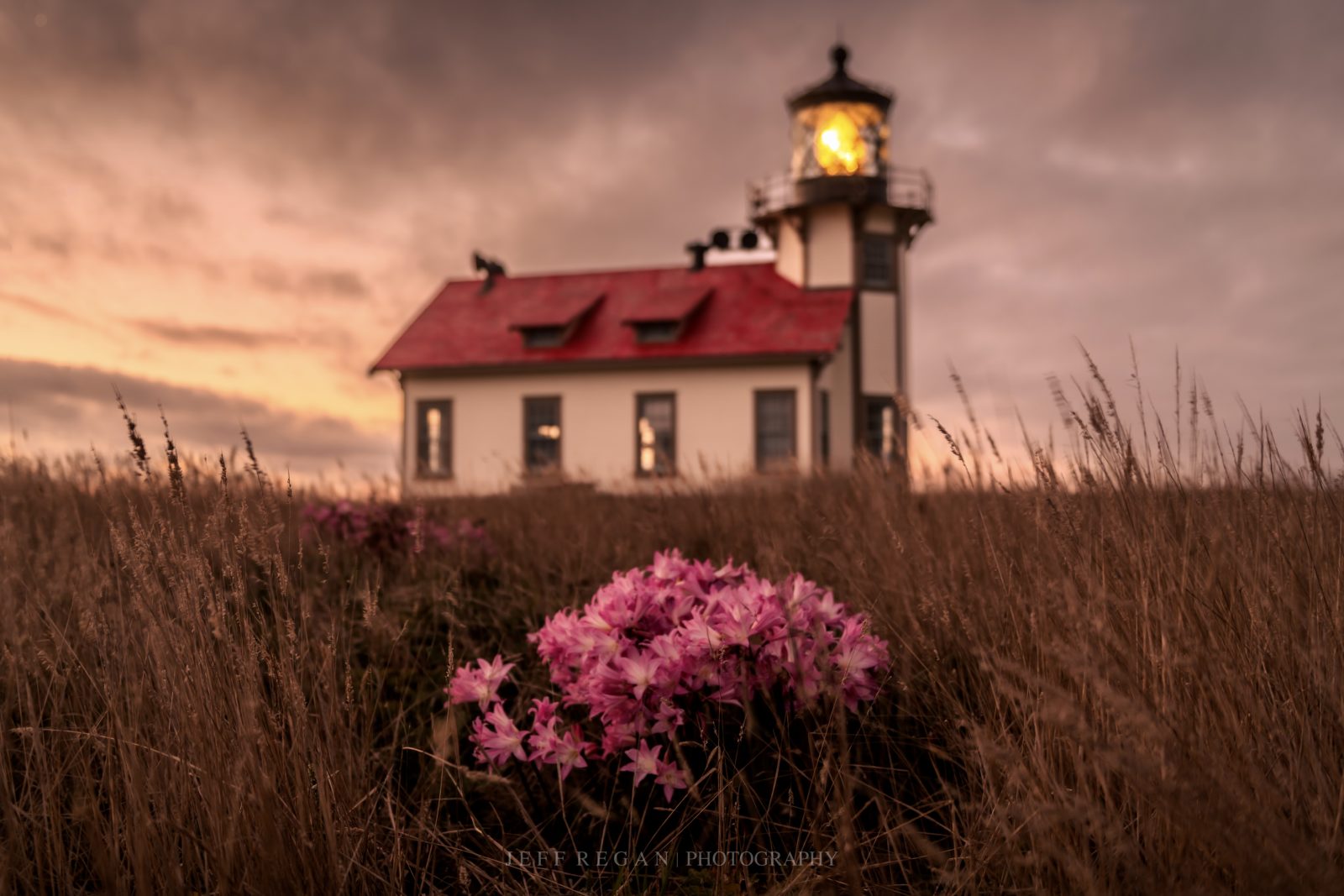 When visiting the North Coast, it is easy to cut over from Highway 101 to Highway 1 in several places, such as the Highway 116 west exit toward Sebastopol to get to Bodega Bay and Highway 128 to Point Arena and Mendocino. Or you can take Highway 1 all the way up or down the North Coast. Whiskey is optional!