Oh, My! What Big Teeth You Have. 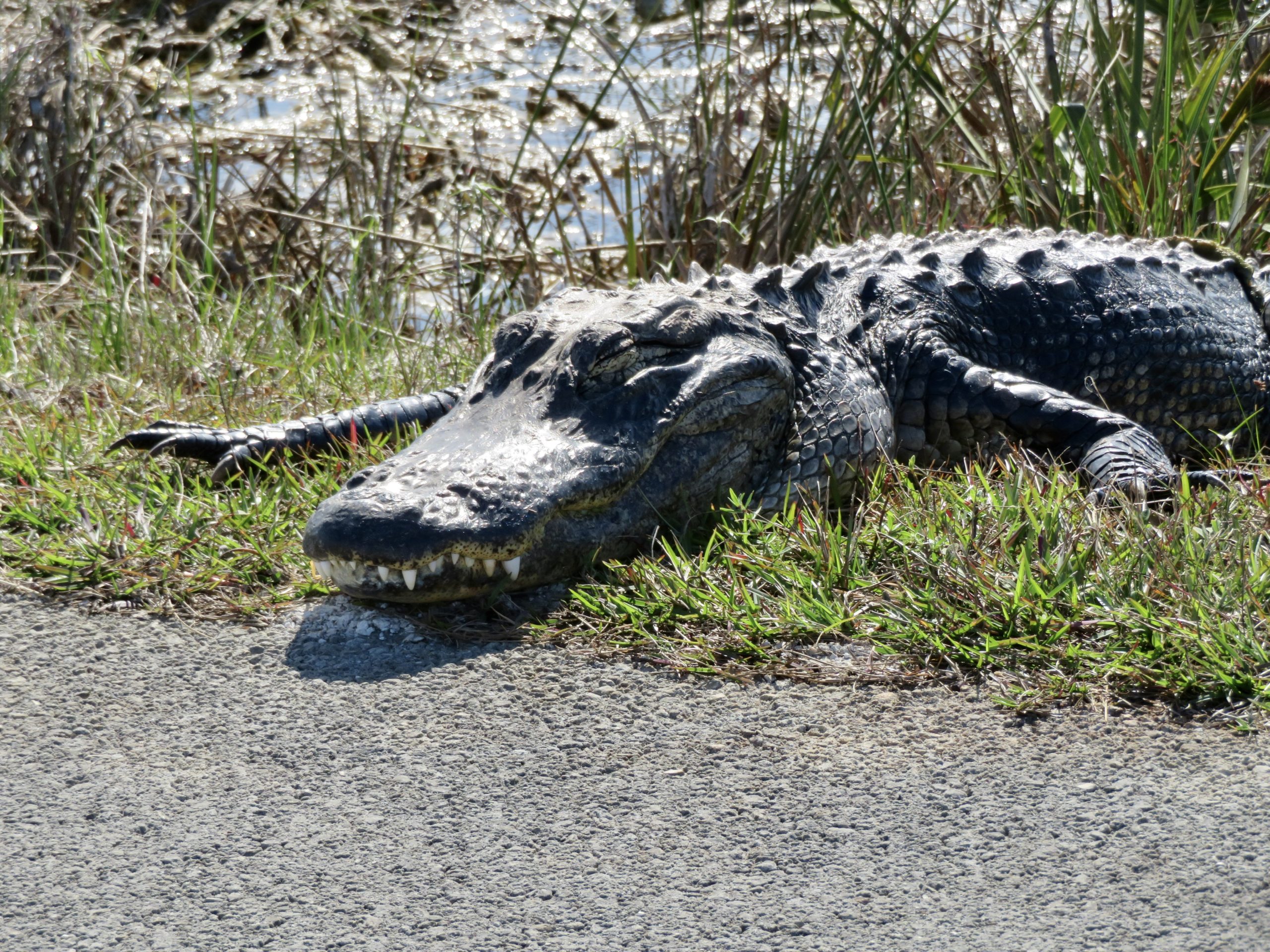 “Hey! Look, did you see that…?” I asked Dave, as I craned my neck and tried to point to the faded wooden sign that passed by faster than I could fully read it.

We were driving on Florida’s Route 41, zooming past the many billboards featuring air boat rides, mangrove kayak tours, wildlife exhibits, and restaurants – each and every one of them plastered with images of impressive gators.

“Yes. I saw the words ‘shark’ and ‘alley’. I was hoping to see lots of wildlife while here in the Everglades, maybe even some alligators,” I laughed, “but I certainly wasn’t expecting sharks!”

Dave looked at me with a raised eyebrow. I’d obviously interrupted his personal musings and he was no doubt wondering what alley I’d emerged from.

“Sharks and alligators?” He said. “Hmm…”

“I wonder what they have in common to be found around here?” I wondered.

“And both have a mouthful of very large teeth!” We both laughed out loud.

“Think we’ll find some?” he asked.

And just like that, a competitive challenge was born.

So there we were, exploring Florida. Between Lake Okeechobee and the southern tip of Florida, there lies an immense area of subtropical wilderness known as The Everglades. 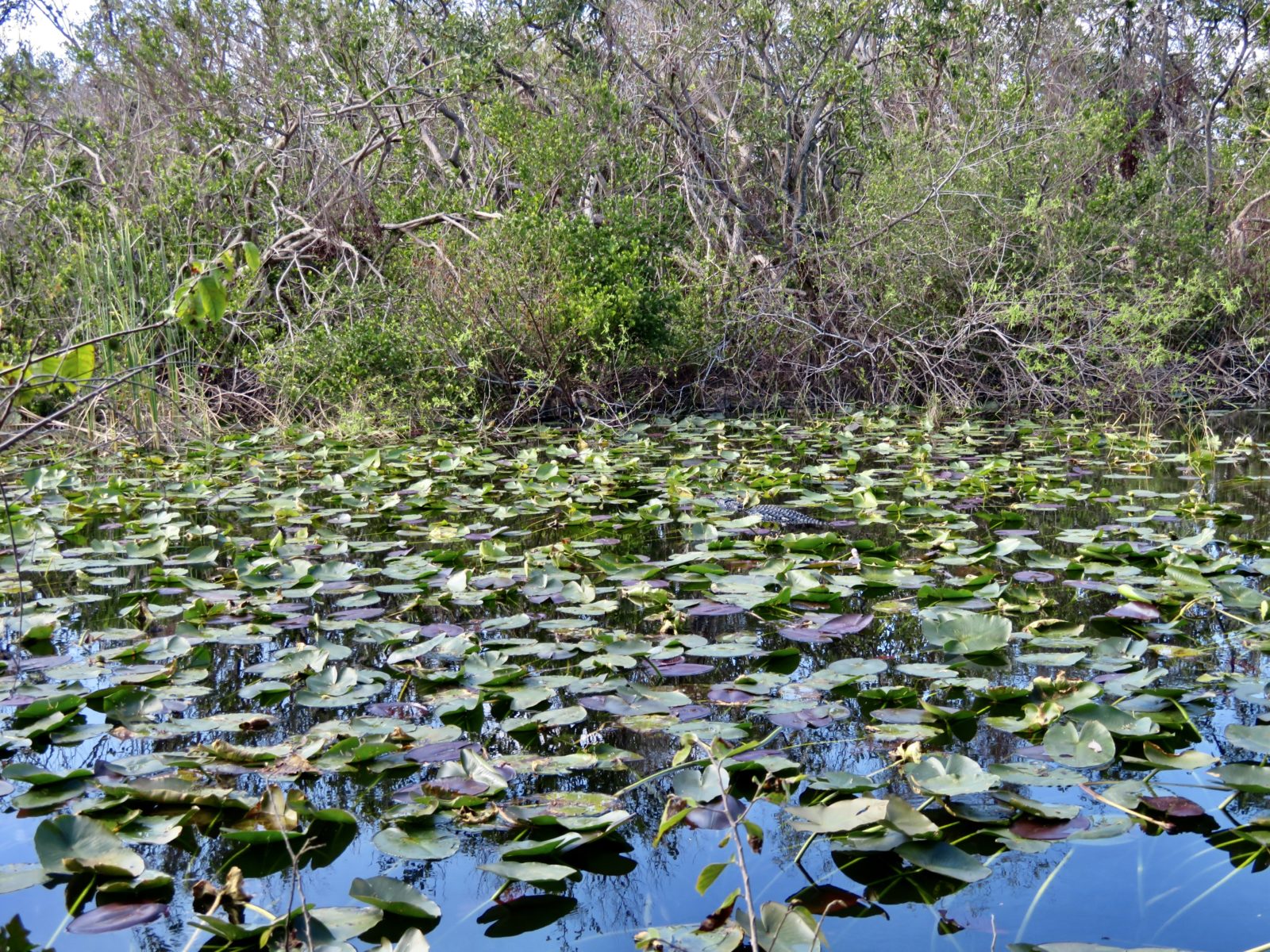 When I hear the term “Everglades”, I think of wetlands and fields of sawgrass (just what is sawgrass?), I think of swampy areas of water (is it really a large swamp or a lake or what?), I imagine apocalyptic-looking tree formations with immense roots hanging down to the water’s edge (are they mangroves or hammocks or what?), and I imagine a beautiful variety of wading birds (I know there will be egrets and herons, but what else?). And I have visions of reptilian-type predators (are they alligators or crocodiles?).

What I don’t think of, however, is sharks.

“Do you think we will see an alligator? Or a crocodile?” I wondered out loud over the campfire that evening. “Just what is the difference between them, anyway?”

“I heard it has something to do with the snout and the jaw,” replied Dave, to which I agreed,

“Mmhmm, I’ve heard the same. But isn’t one fresh water and the other salt water?” I asked.

We Googled ourselves some research and turns out you have to get yourself pretty darn close to a set of chompers in order to get some answers. What you would determine, once you inspected one up-close-and-personal, is that alligators have a short, wide, and round U-shaped snout, while crocodiles have a long, thin, and pointed V-shaped snout.

While you’re bent down examining the fine intricacies of snout shape and length, you might also take the time to notice that an alligator’s upper jaw is wider than its lower jaw, so that when its mouth is closed, the teeth in the lower jaw are hidden. Whereas if you were examining the upper and lower jaws of a crocodile, the teeth would be interlocked if its mouth were closed.

“I sure hope its mouth is closed!” I laughed out loud. “A little too close to any jaws for my liking. Both are carnivores. But I was right – crocodiles are salt water creatures, while alligators tend to be found in fresh water marshes.”

There is plenty of water to be found within Everglades National Park for both of these reptiles to frolic in. While technically not a swamp, The Everglades is actually a river; it is a really slow-moving, shallow body of water. It was traditionally called the Pahayokee, or “River of Grass”, so named by the Native Americans. Fresh water from Florida Bay combines with salt water from the Gulf of Mexico, creating quite a unique ecosystem where many animals coexist. There are many drainage channels, called sloughs. Shark River Slough just happens to be one of them.

I spent some more time Googling and found a fact on some NPS website boasting that within the Park boundaries, there lives a population of over 200,000 of either one of these reptiles!

“WOW!” I said. “Plenty of space to find one and examine its snout to see whether it’s actually an alligator or a crocodile.”

“No mention of sharks, eh?” Dave asked with a grin and a wink.

“Well there’s Shark Alley and Shark Slough,” I answered, “but it also says that bull sharks can be spotted swimming about the river mouths and coastlines looking for food.”

“Let’s go biking tomorrow,” he suggested, to which I happily agreed. We were both eager to win our challenge of being the “first one to find a tooth”, not to mention get some exercise after driving all day.

The next morning, after a hearty breakfast and armed with knapsacks full of stuff (sunscreen, lots of water, first-aid pack, lunch, and snacks), we parked our Leisure Travel Van Unity IB at the visitor center. We prepped our bikes, grabbed our bike repair kit (just in case, ’cause, 15 miles!!), and sorted ourselves into bike-riding mode. 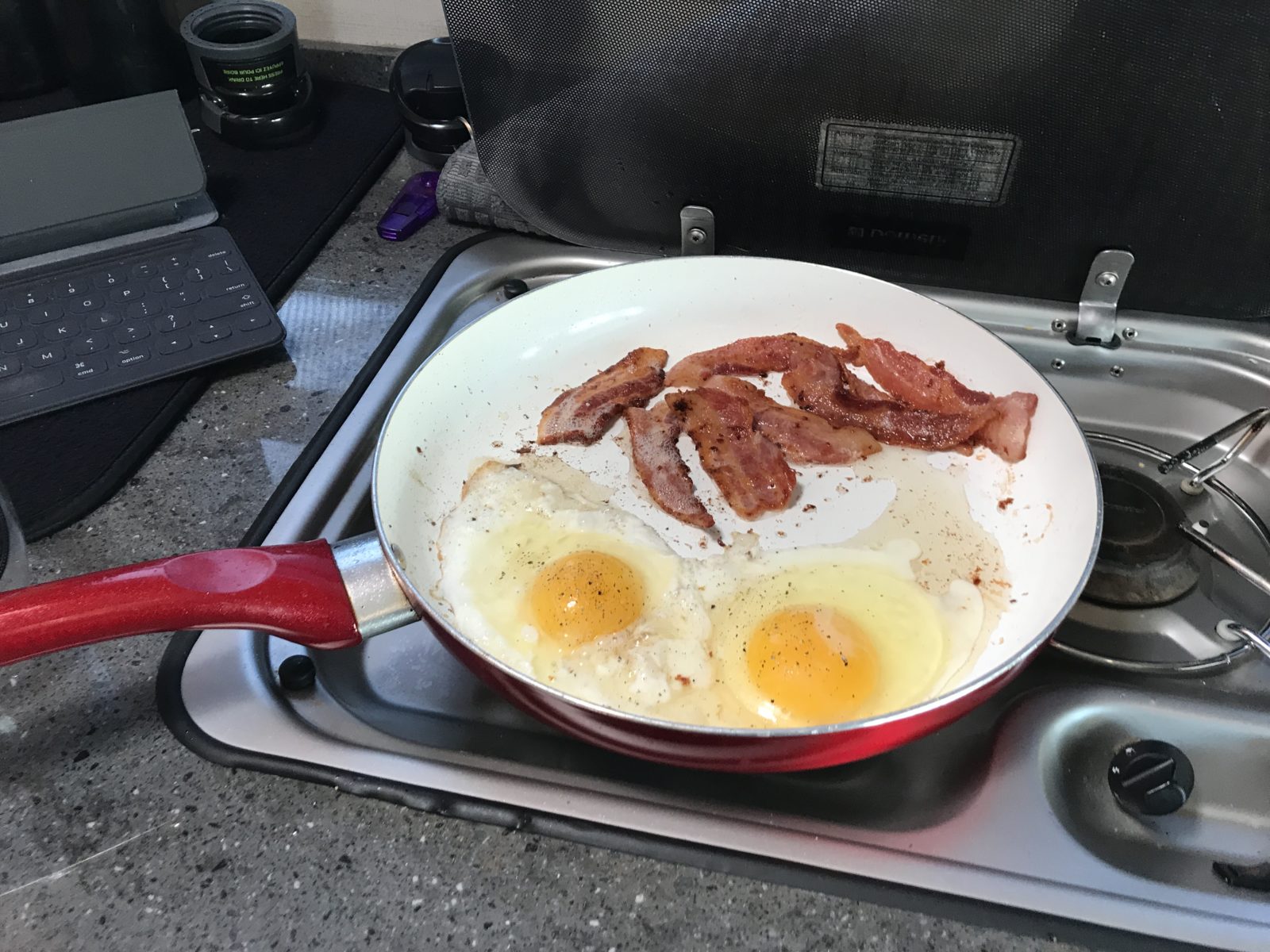 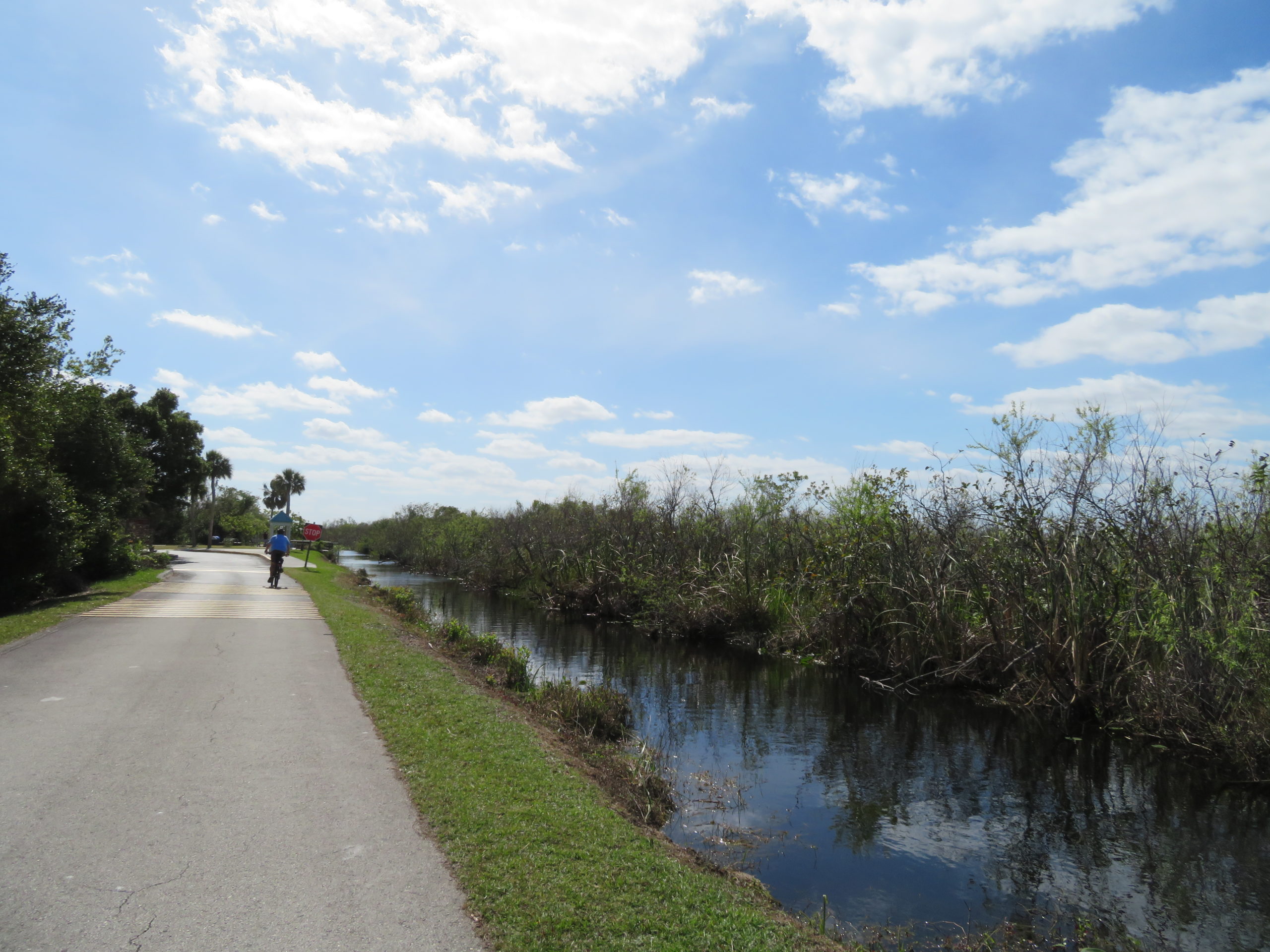 We were early to arrive, and there weren’t too many visitors about. Some were walking, some, like us, had their own bikes, and others were queuing in the bike rental line. There is also the option to take the guided 2-hour tram ride. All of us early birds must have had the same idea: that the best time to see wildlife is early in the morning, before the hot afternoon sun has everyone hiding in the shade.

Shark Valley (Tram Road) is smooth, flat, and made for easy pedalling. It’s a good 20 feet wide. It wasn’t long before we found our groove, the early morning breeze cooling us off, our eyes scanning the beauty all around us.

“Hey, watch that fallen tree on the road,” I yelled back at Dave. But as I got closer, I realized it sure was a funny looking log… with another, larger log laying on the grass beside it. And another misshapen one to the left. 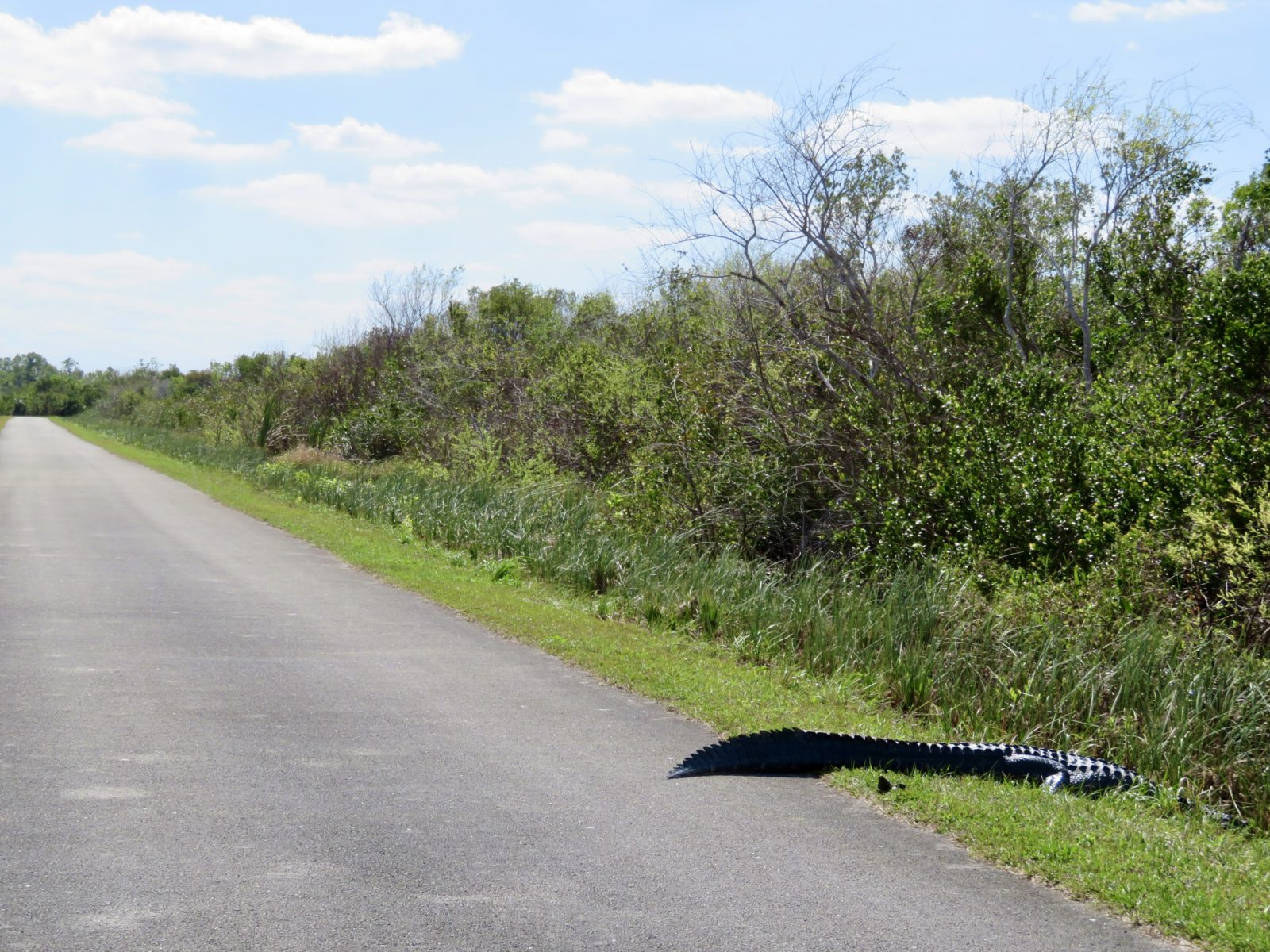 And when I got closer yet, I slowly realized that these weren’t fallen tree stumps at all. They were long and dark, had one very pointy end, and a few jutting appendages. Weird…

Another turn of the pedal and I could see the many shades of black and grey scales, and another pedal closer brought us views of a very large, very U-shaped mouth. The appendages were actually legs, with very pointy toes. 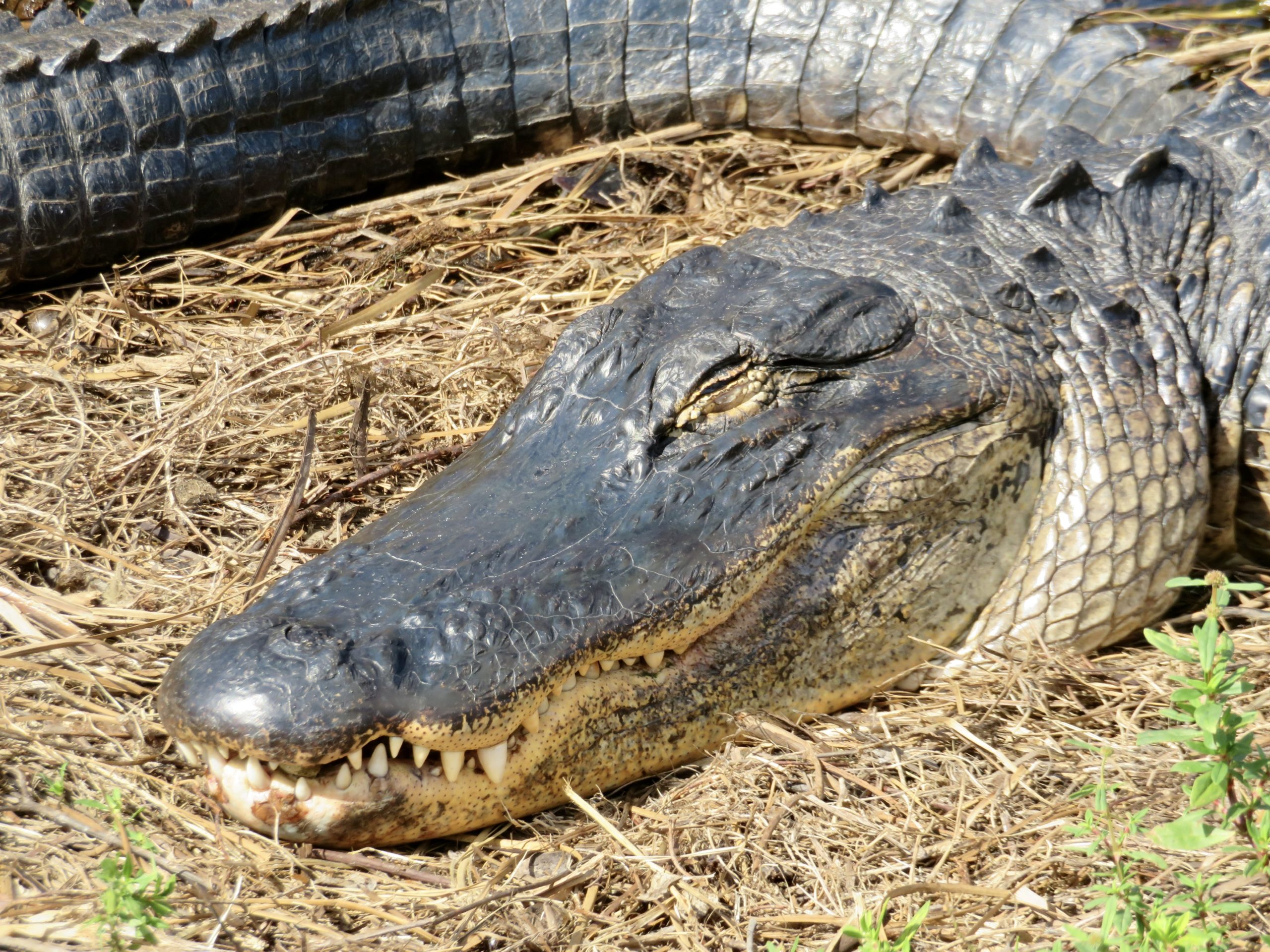 There was something gutturally wild about knowing that I was just feet away from these prehistoric-looking creatures, some larger and longer than I was. There are absolutely no barriers. No fences. No cautionary tape. Just you and the path and them.

We circled way wide around the first one. Then the second one, and by the tenth one, we were still no less amazed and awed. They didn’t even bat an eye as we pedalled by, and certainly didn’t seem to mind our presence on their turf. But we minded that it was their turf, and didn’t get too close. We slowly got accustomed to sharing the path with these creatures that could devour us in a bloody second. We would only stop to take photos after we had gone by them and knew we were far enough ahead that, should one wake up, we would have a pedalling chance to escape. 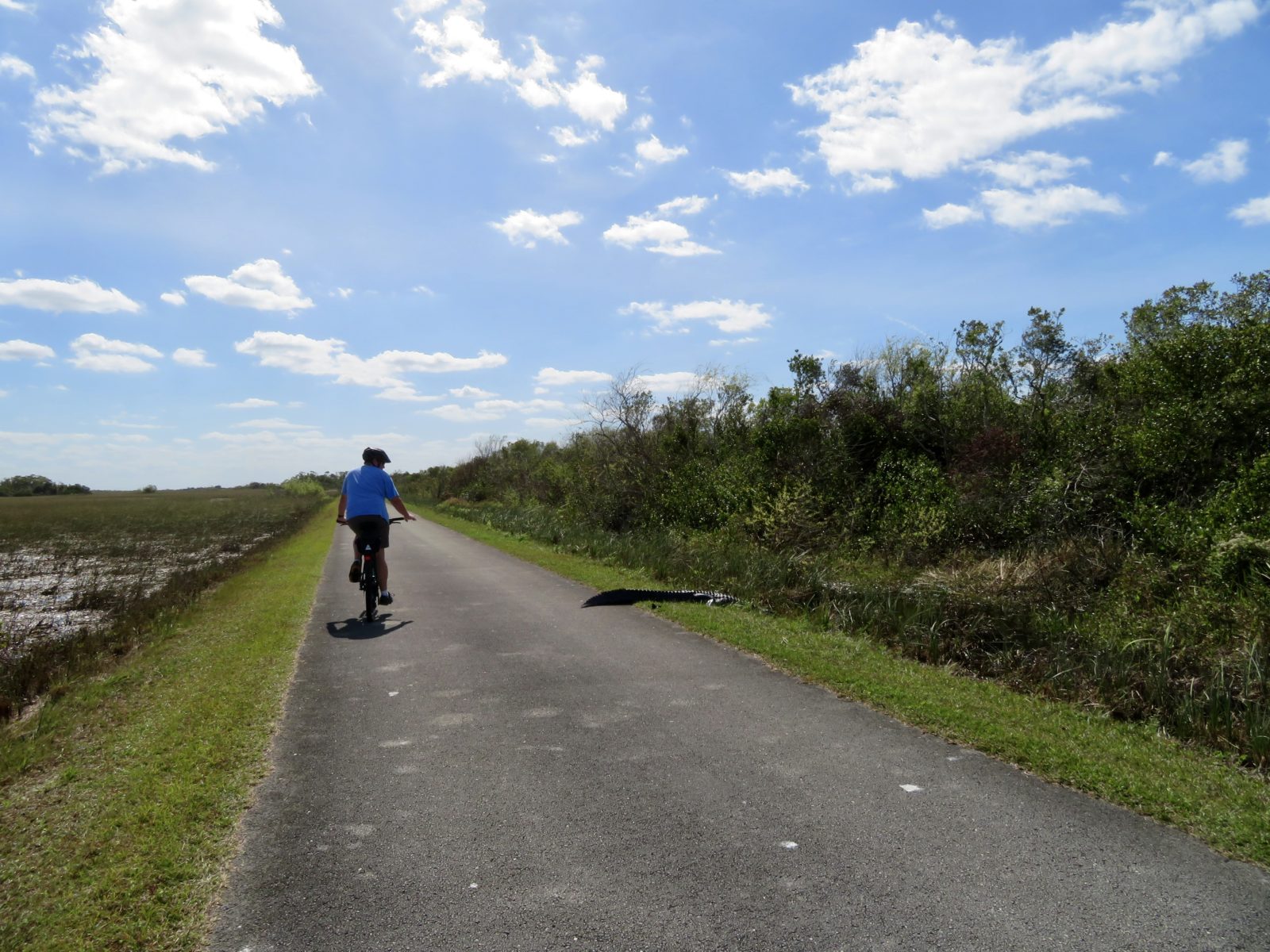 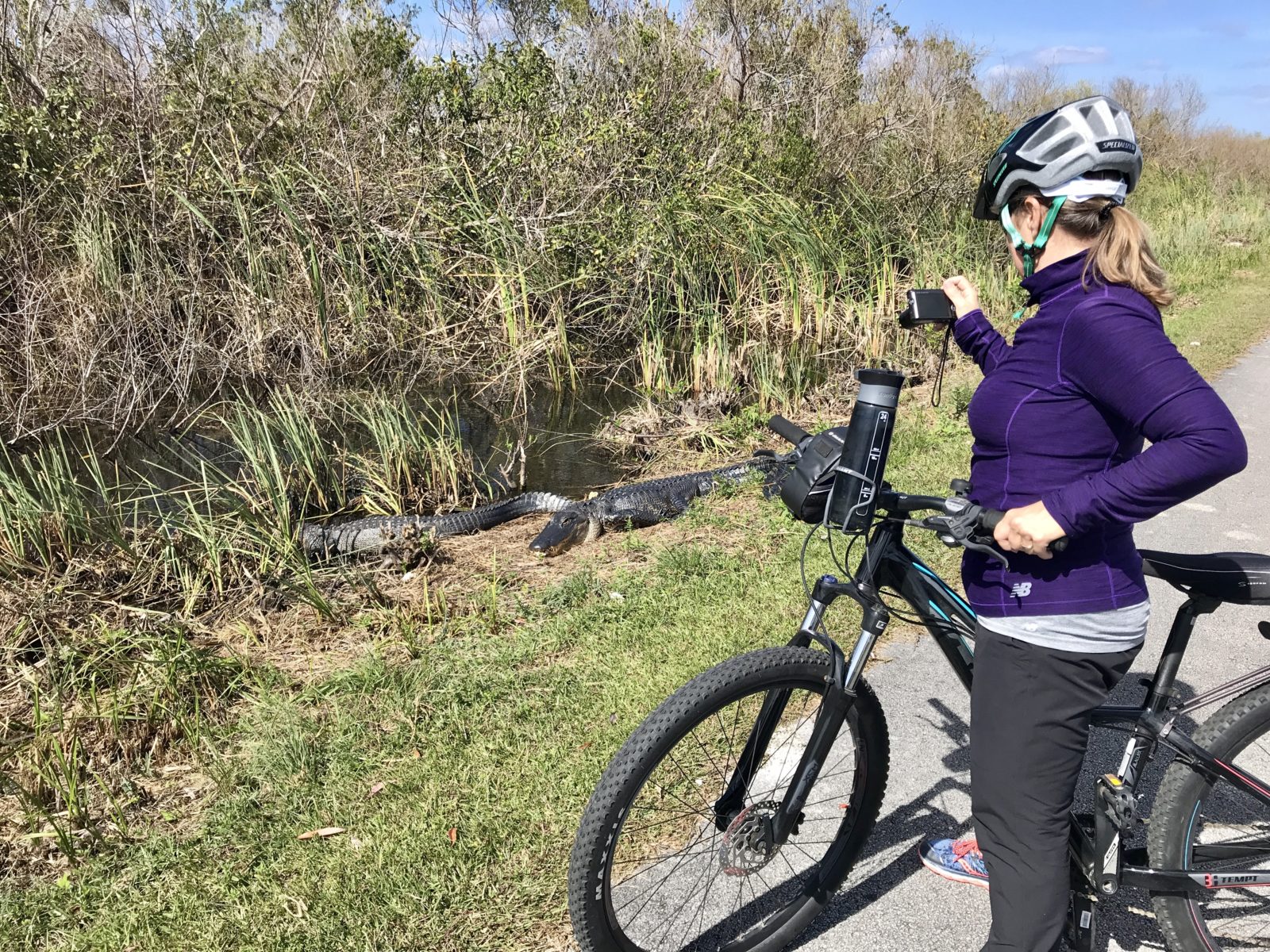 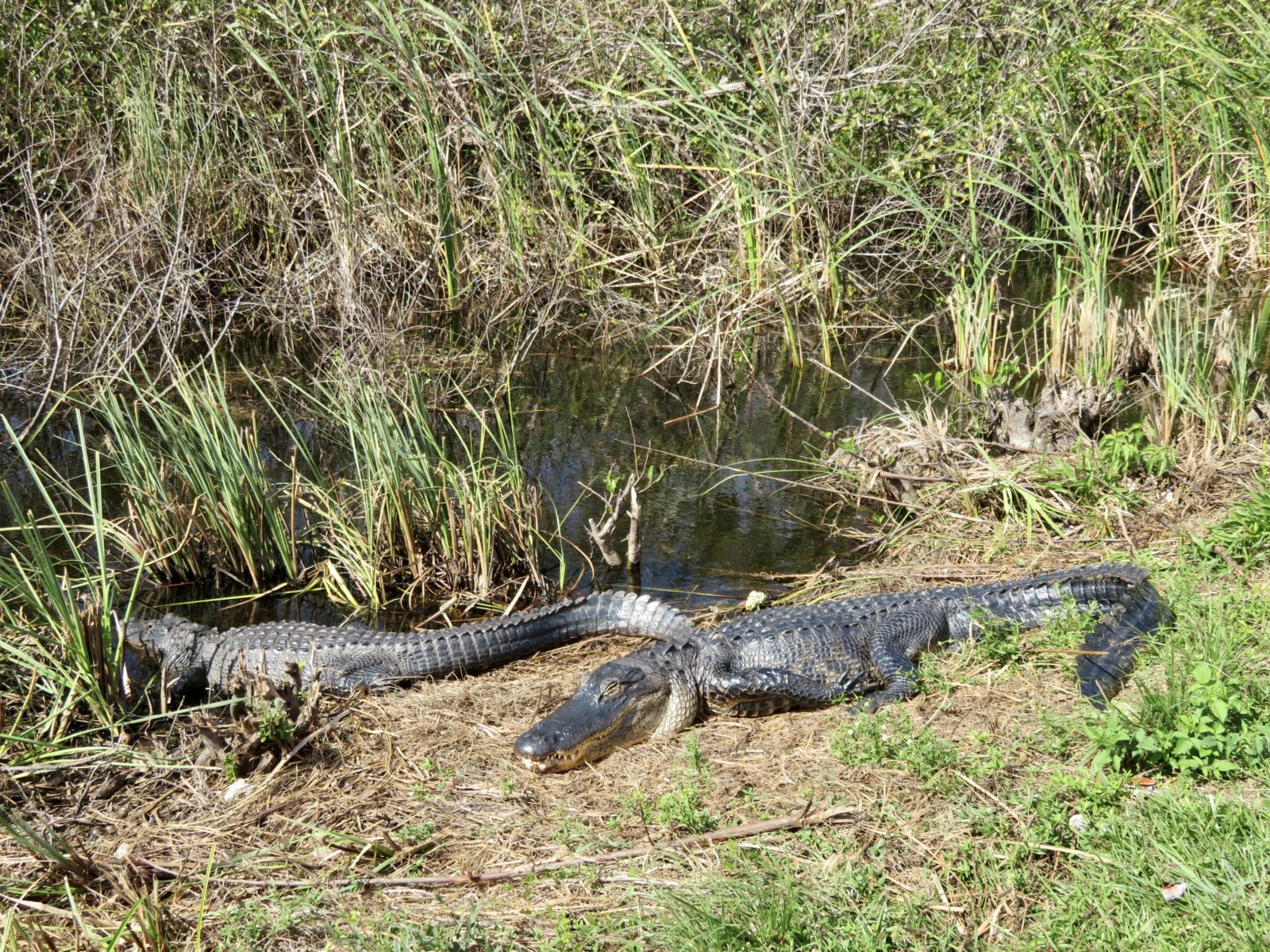 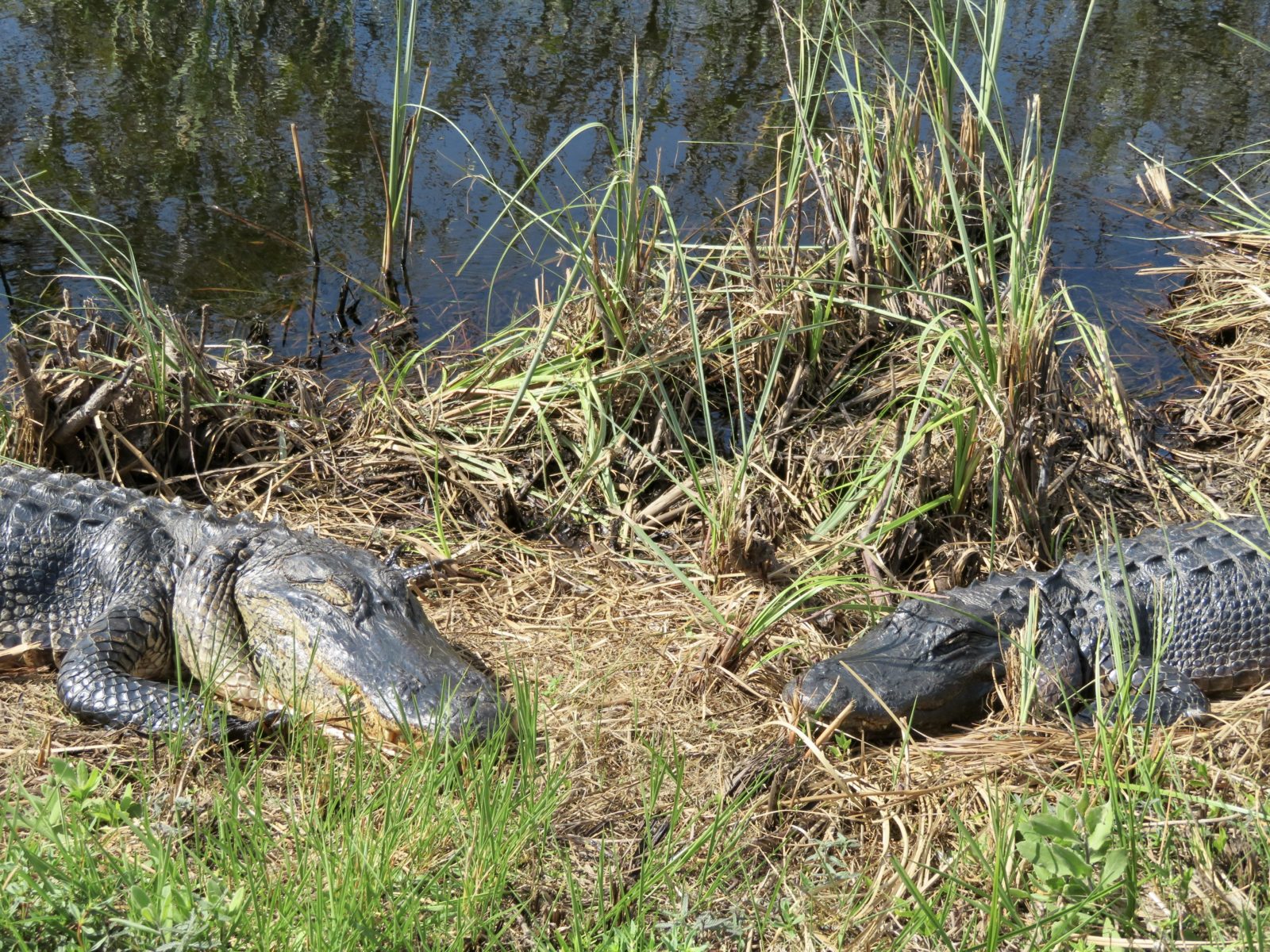 But they didn’t wake up. They didn’t even flicker an eyelid. They remained comatose, basking in the heat of the sun, the ground below helping to warm their underbellies. These animals cannot control their temperature and live on instinct. When they are cold, they lay in the sun and when they are hot, they swim.

We were plenty close enough to see those chompers, up-close-and-personal, but really it was the zoom on my camera that brings you this incredible photo. 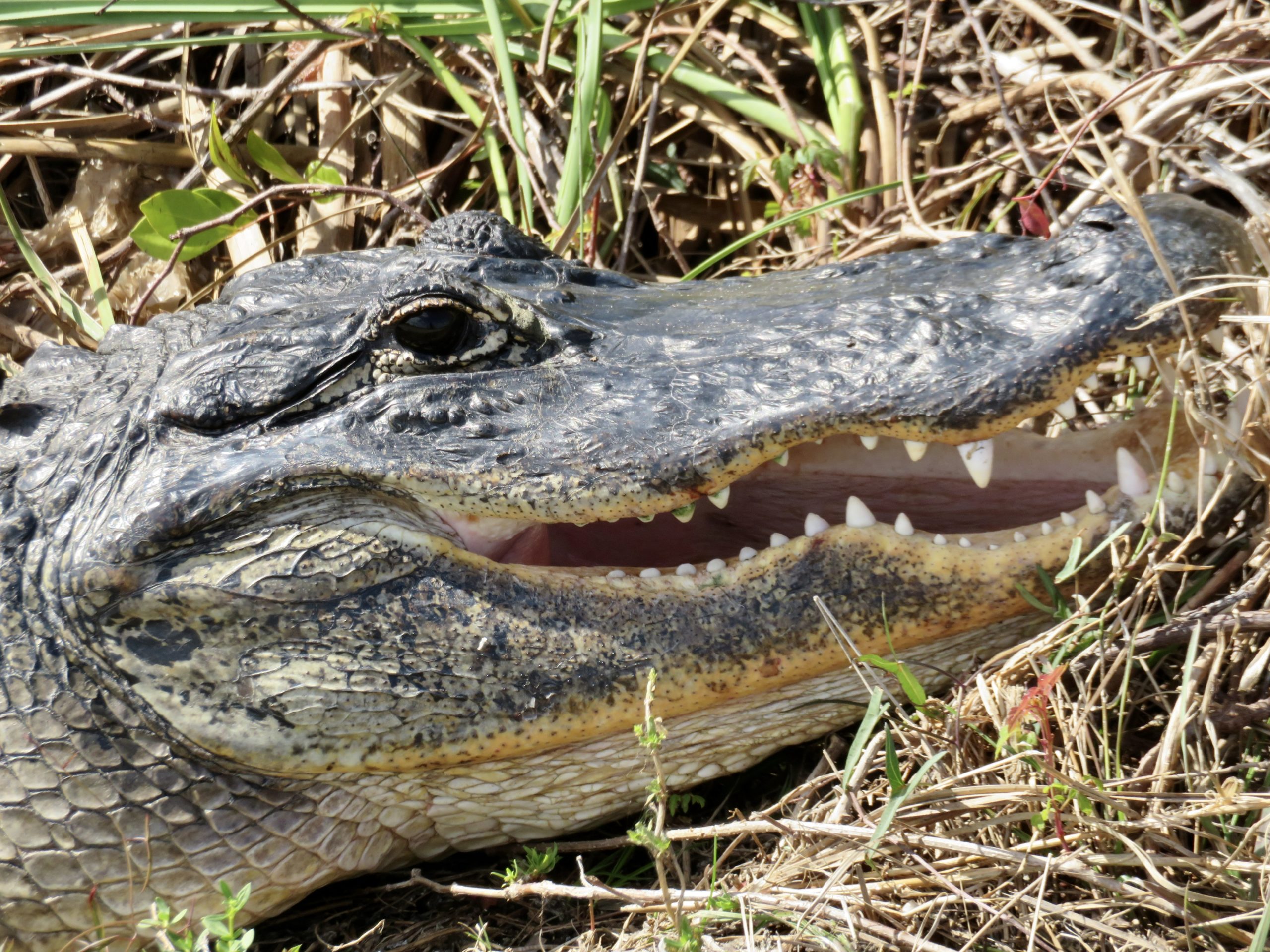 Fields of sawgrass surrounded us on either side. Sawgrass is a tall, slender, leaf of a plant, defined by sharp pointy edges that are razor sharp and easily cut fingers that grab them. We were surrounded by mangroves: black, red, and white. Mangroves are salt-tolerant trees, their roots reaching deeply into the waters they grow from, acting as nurseries and sanctuaries for marine animals and wading birds. Bigger clusters of cypress trees reach higher to the sky, and hardwood hammocks make up the tree islands.

And in the still depths of all this greenery, our eyes adjusted to seeing the birds. 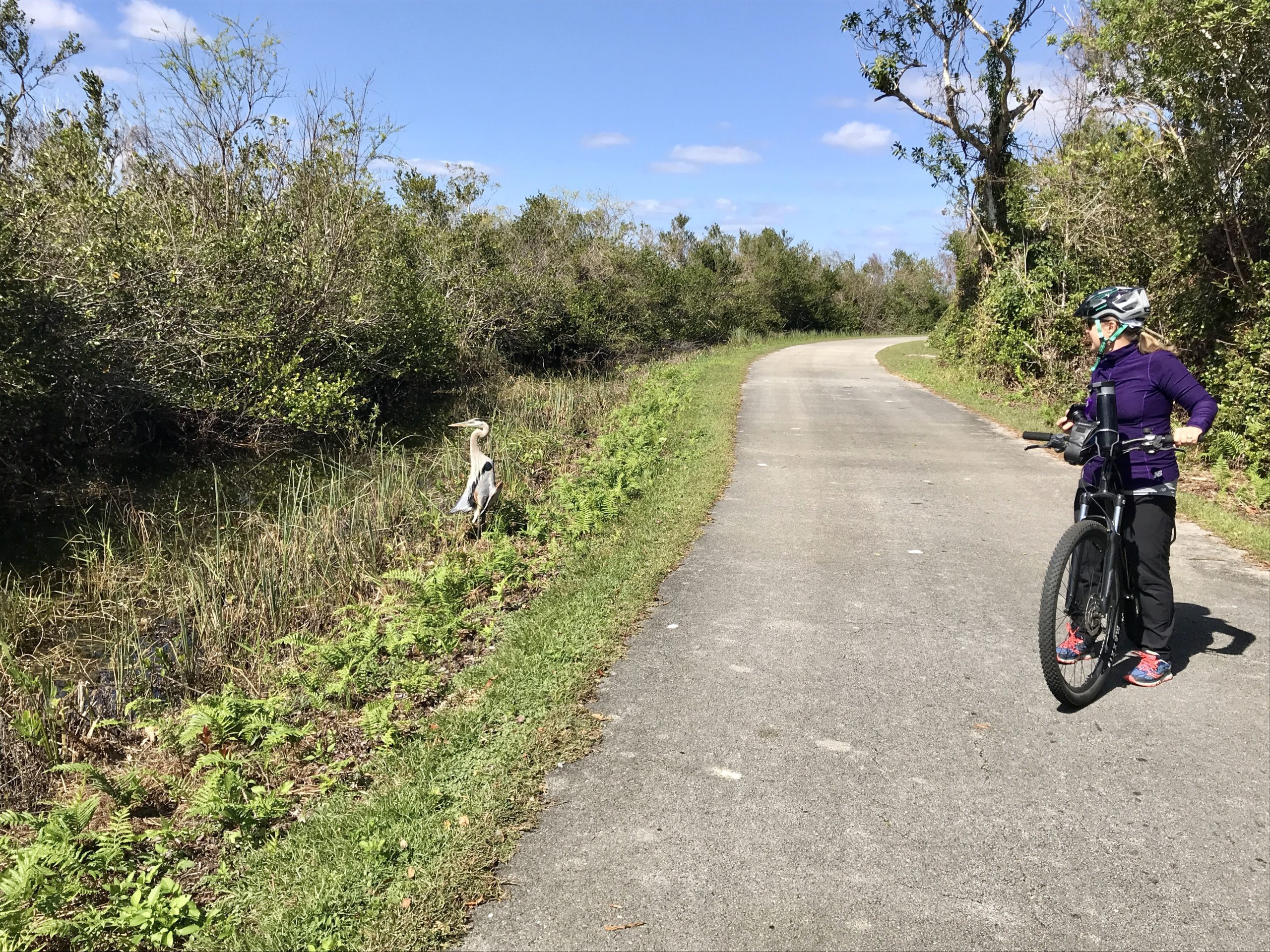 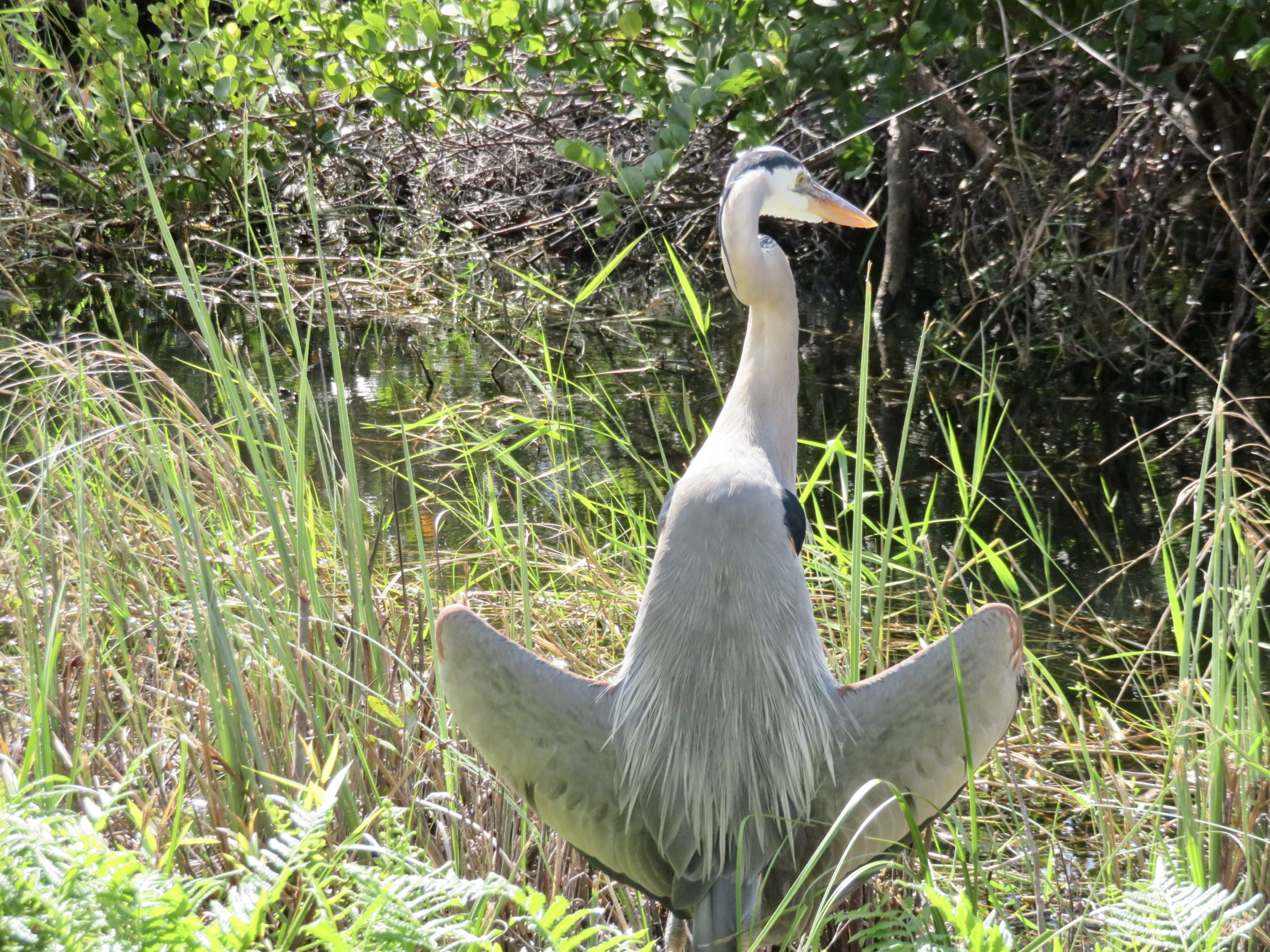 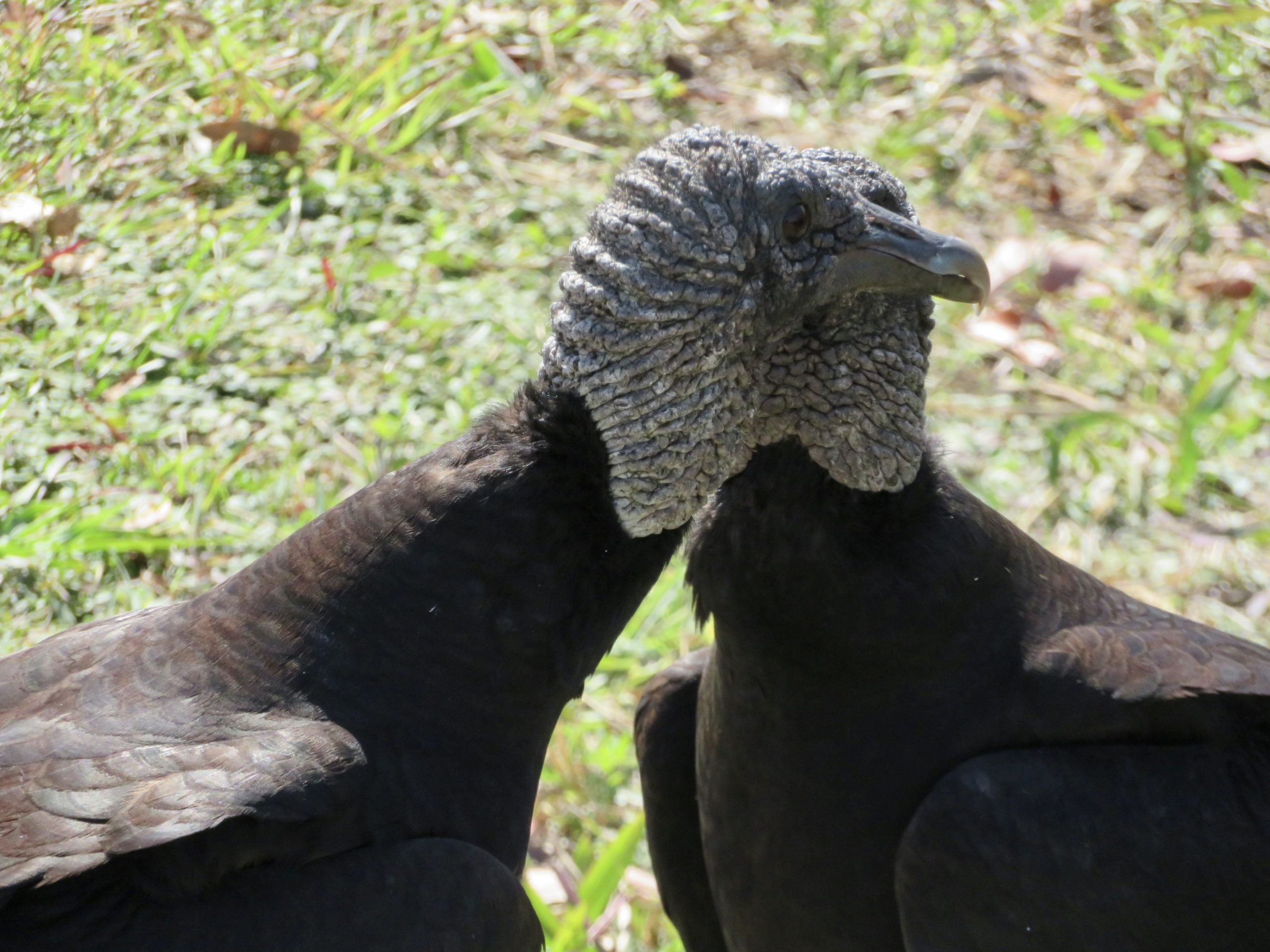 Some vultures having a private moment. 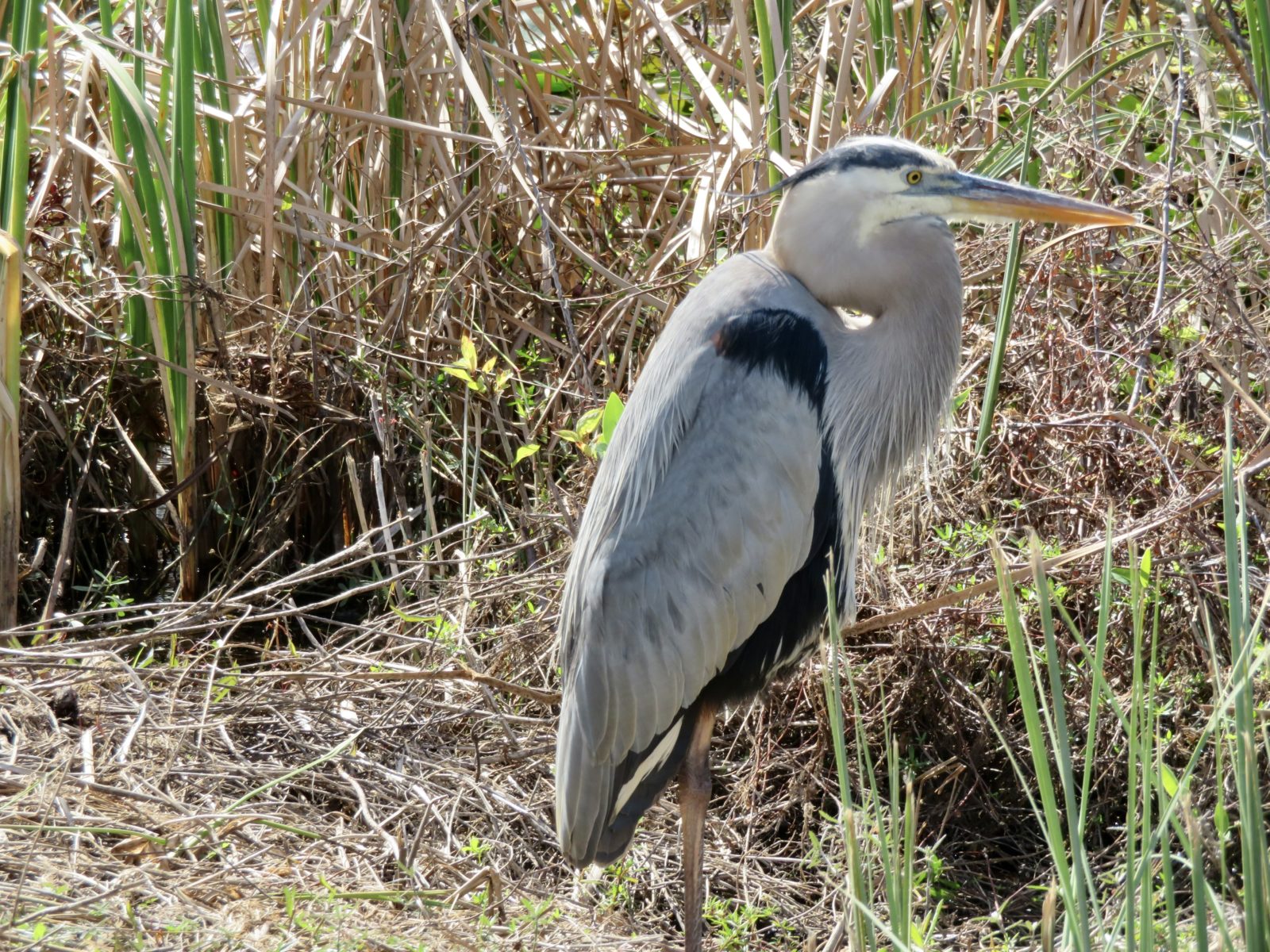 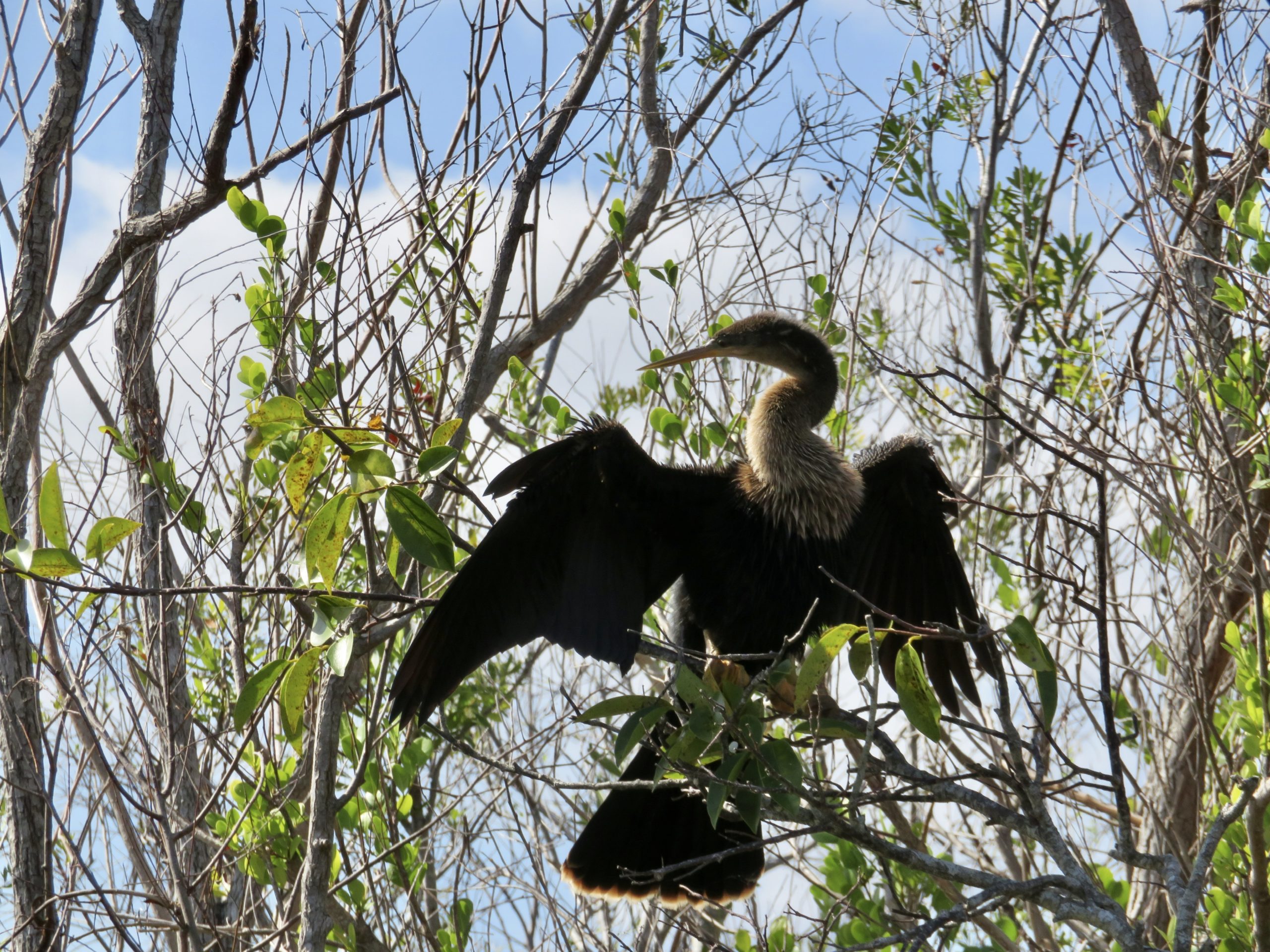 Anhingas in the trees. 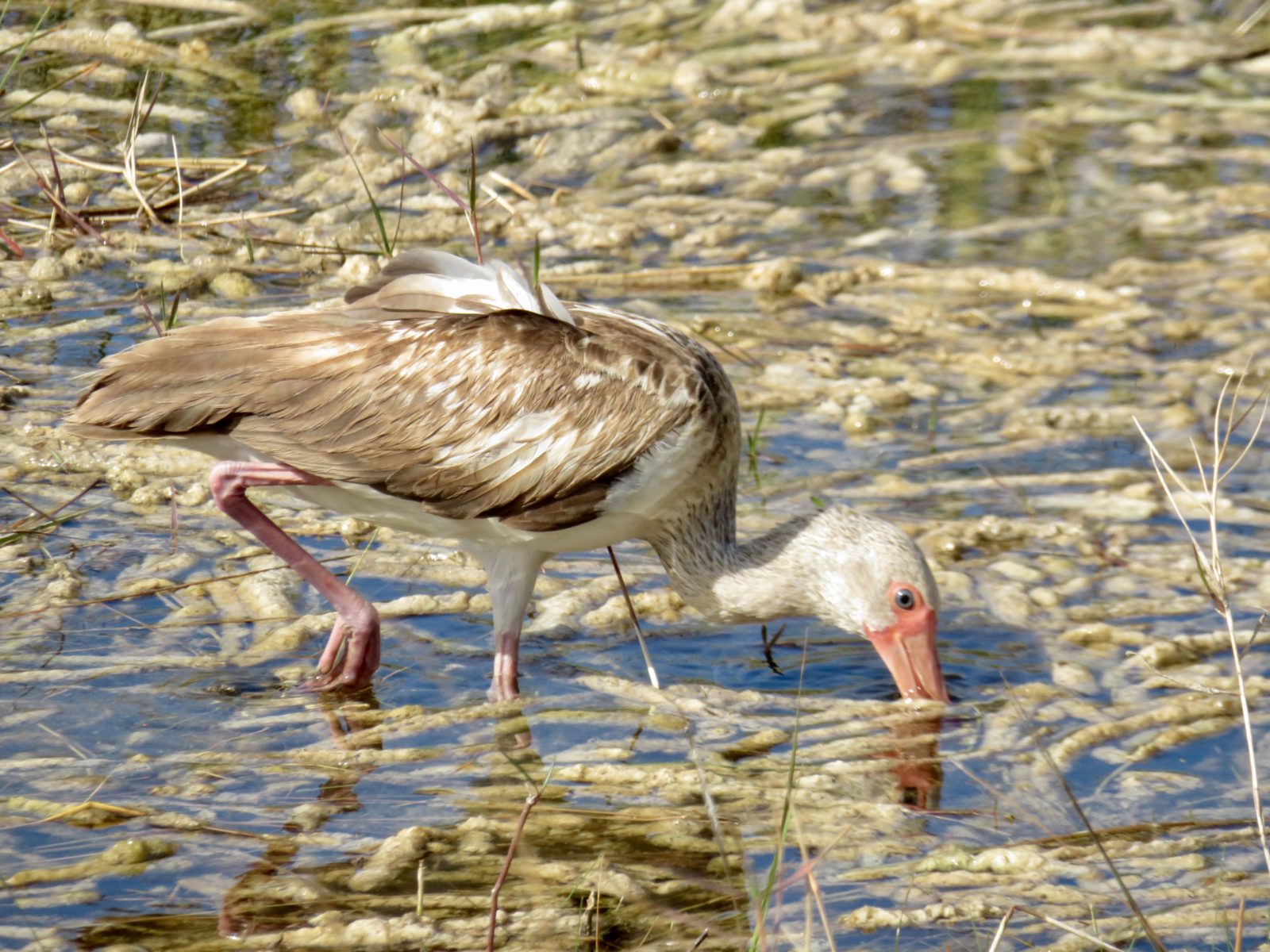 Wading birds of all kinds and colors. 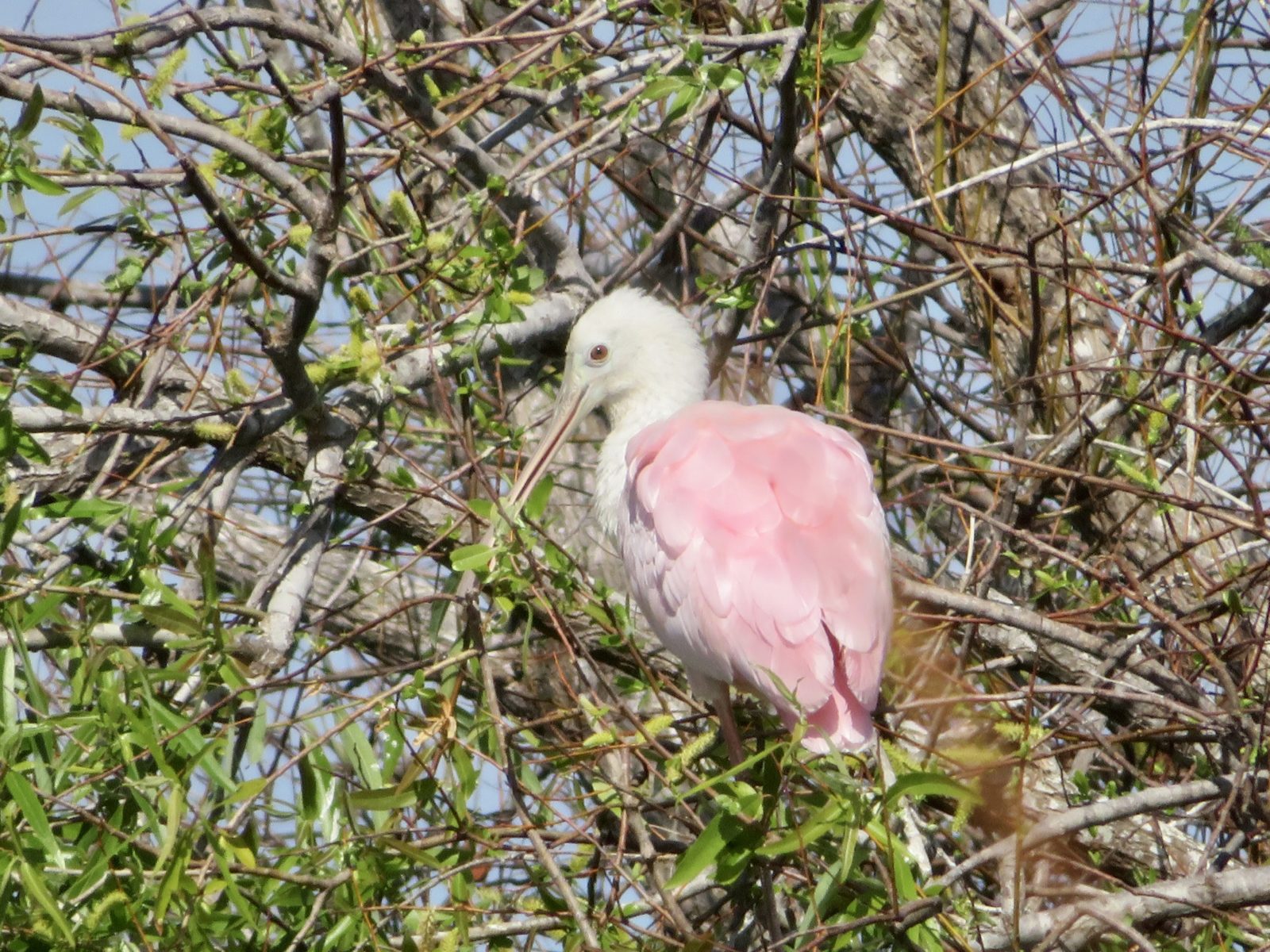 Wow! A smidgen of pink hidden in the branches – a roseate spoonbill.

There’s just something incredible about seeing animals live and for real, with no barriers between my eyes, my camera lens, and them. And they all live together in peaceful harmony. Or at least that’s what it looks like. 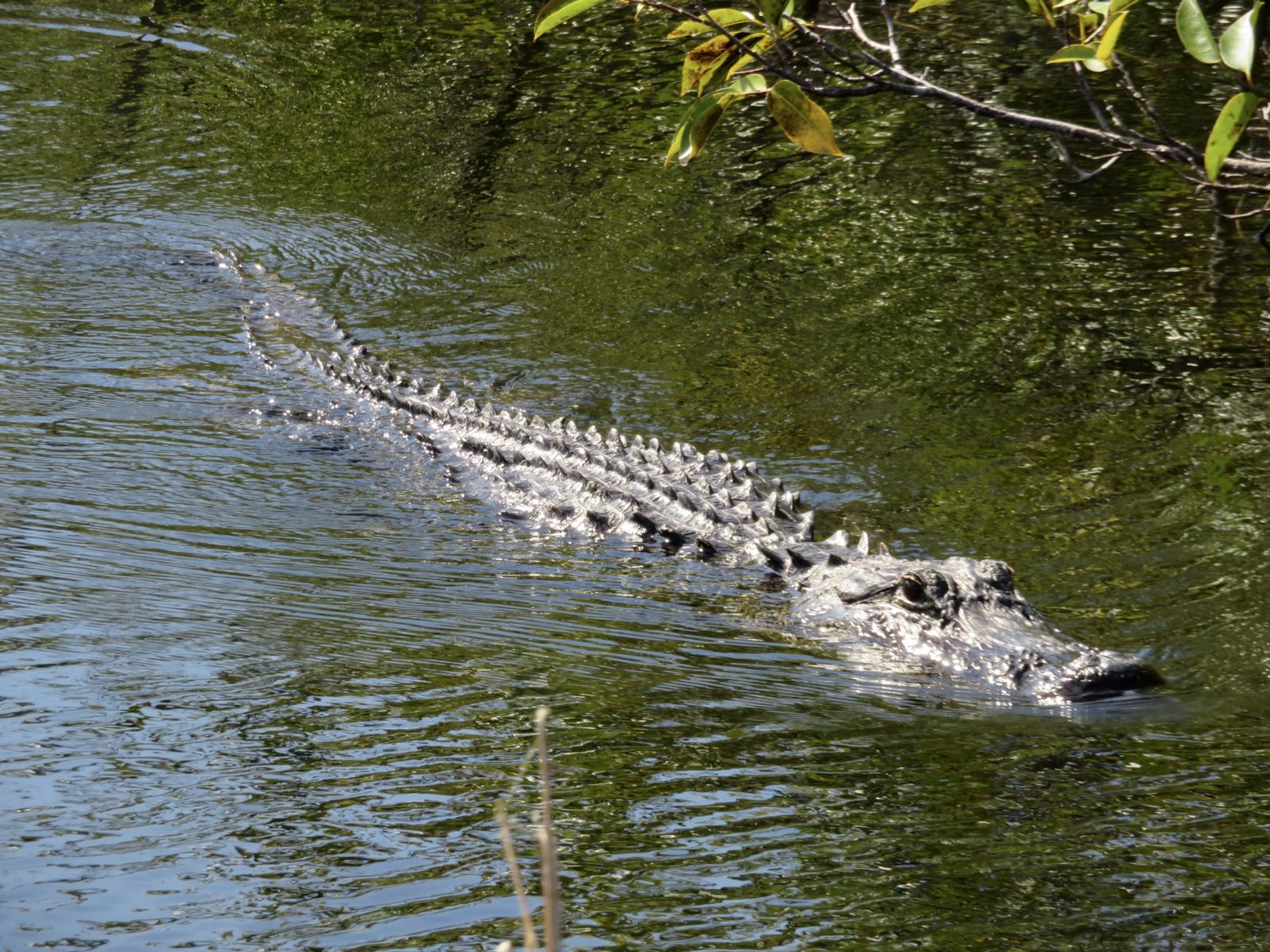 As we continued on, a very unusual looking structure appeared. Something quite out of the past laying directly ahead of us. Our Information Map told us we had biked about 7 miles, and were now at the Shark Alley Observation Tower. It was made entirely of concrete, with a swirling ramp heading upwards to a platform and what looked like stairs leading to another viewing platform at the top.

Locking our bikes at the conveniently placed bike ramp, we walked up the swirling concrete ramp, a perfect chance to stretch our bike-weary legs. 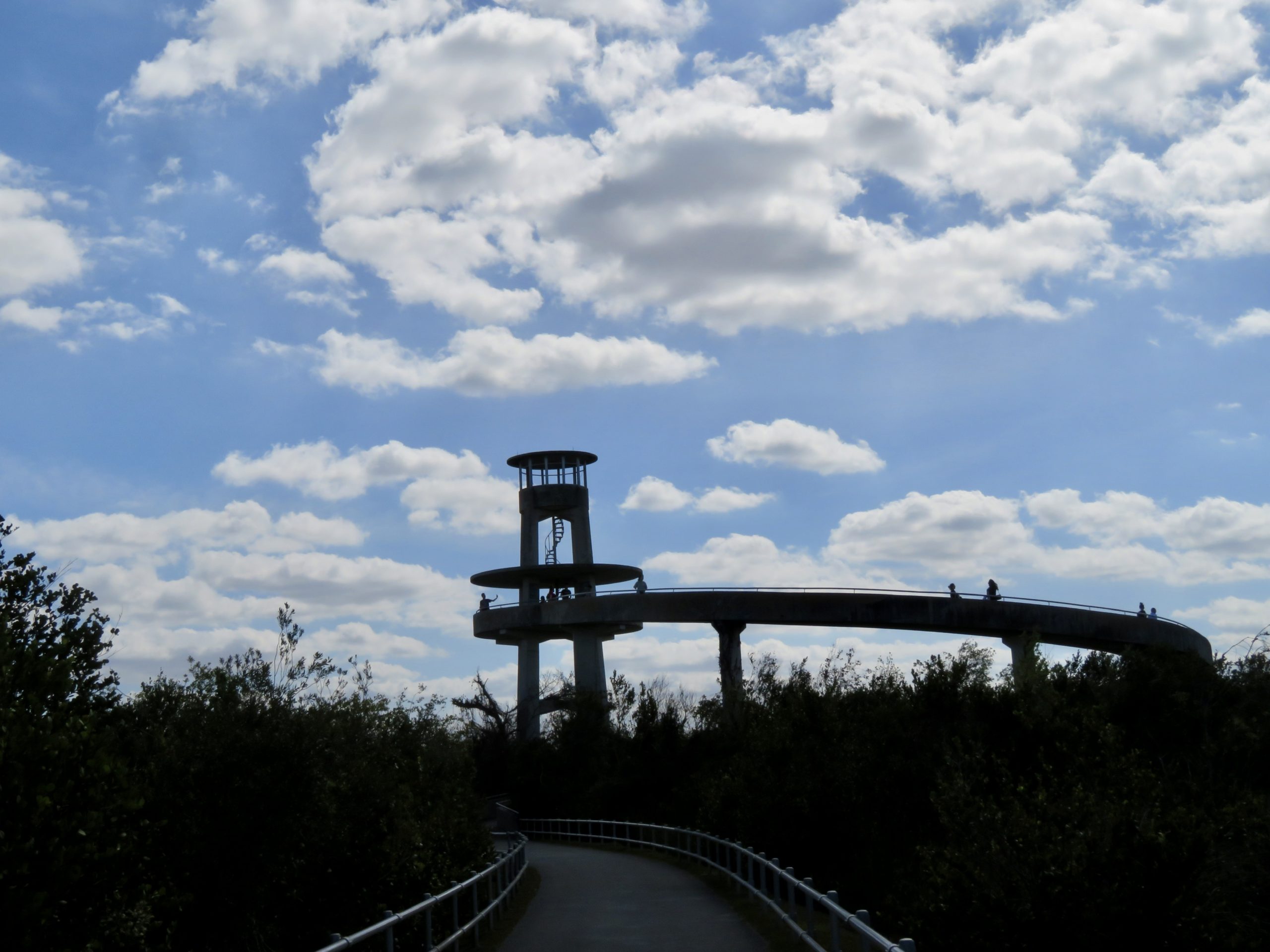 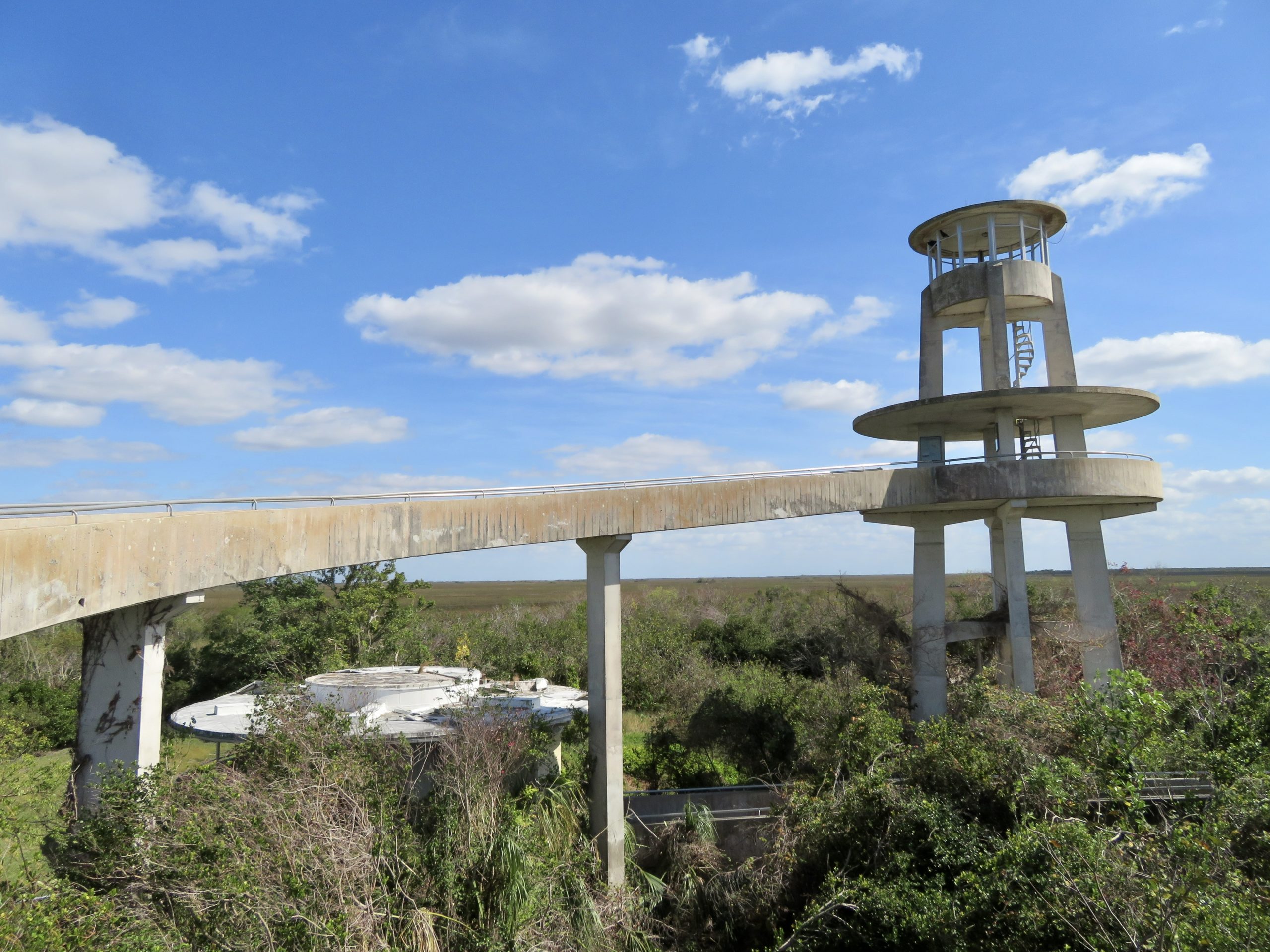 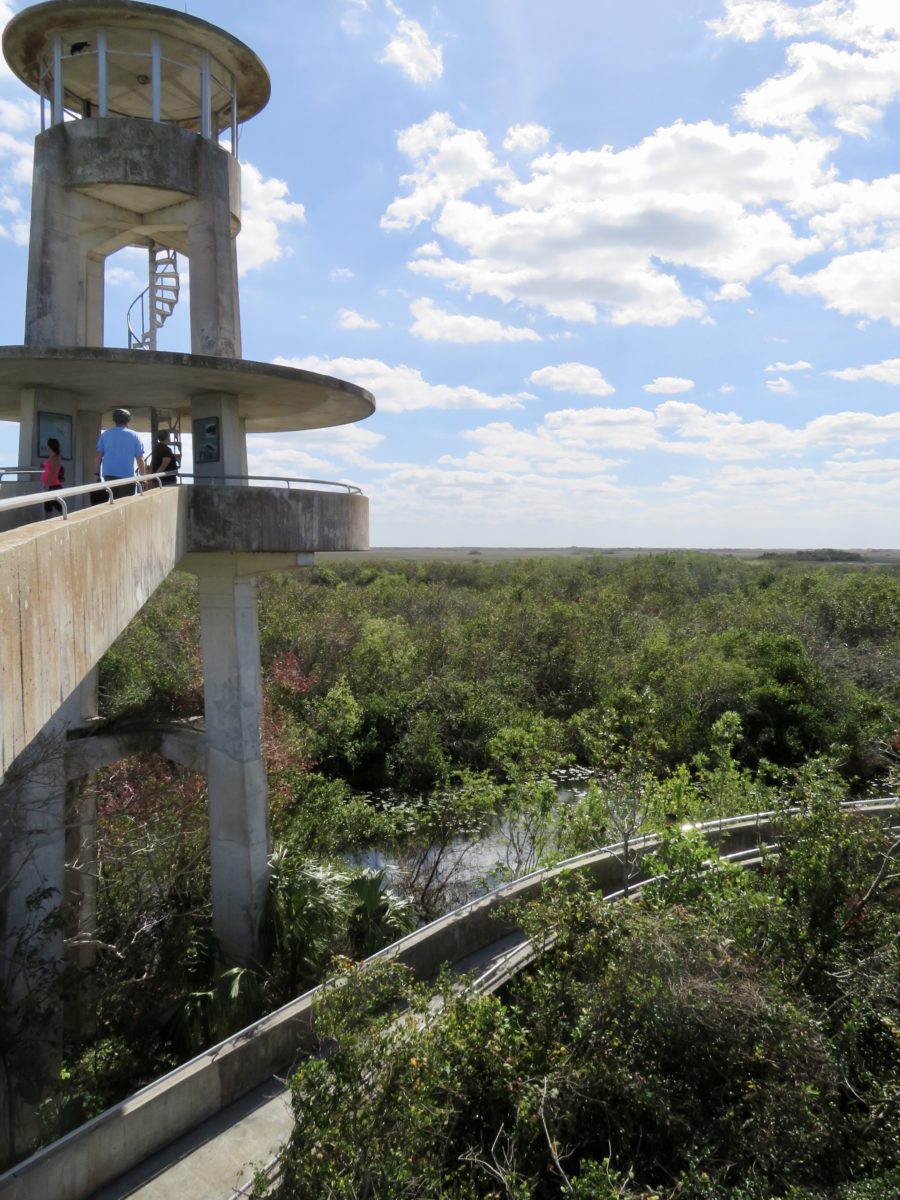 The tower itself was actually built in 1956, and is purportedly an example of Mission 66 architecture. Once at the top, we were rewarded with panoramic views of the lands below us, a slight glimpse of this immense 1.5 million acre national park we were in. 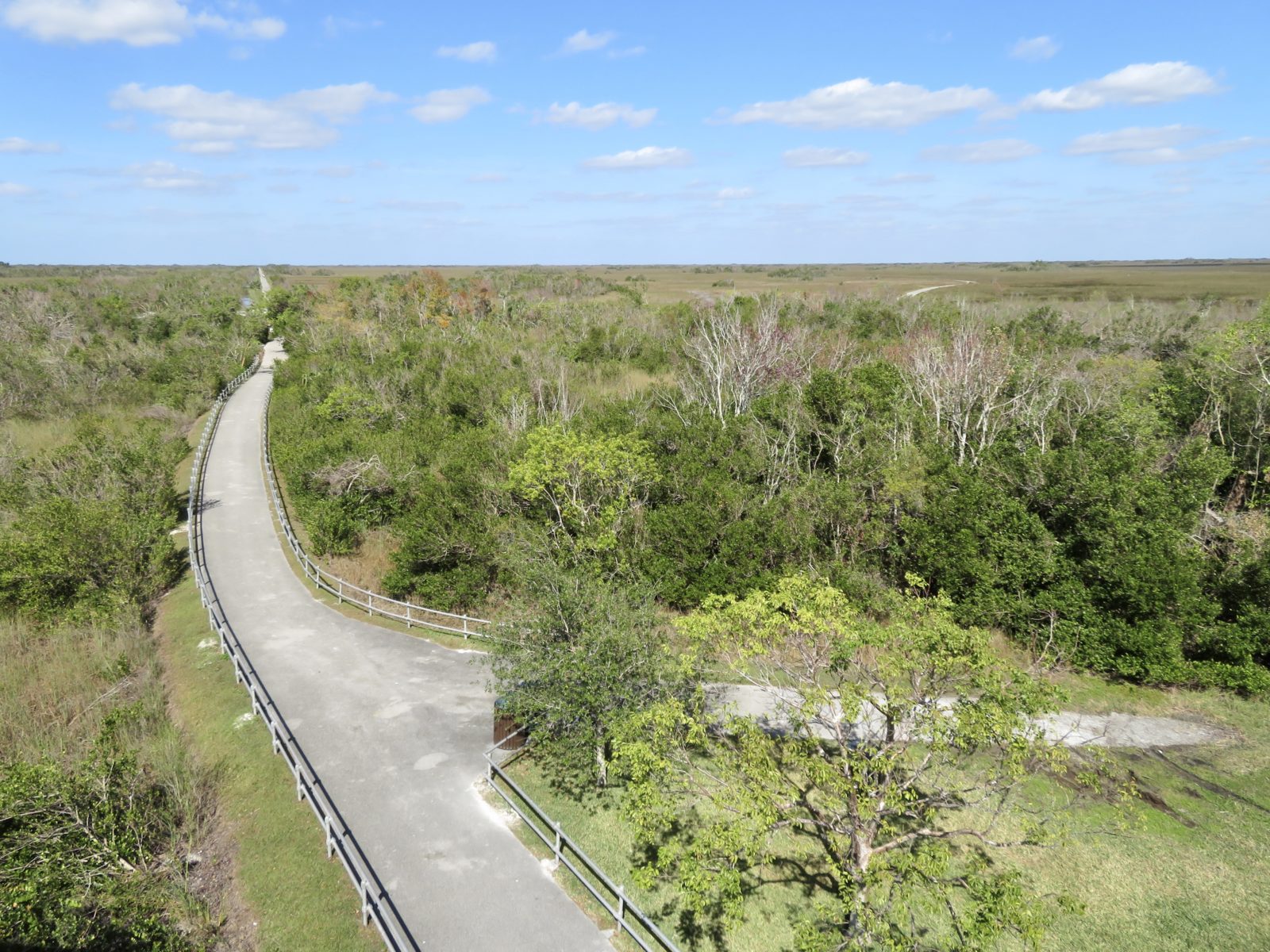 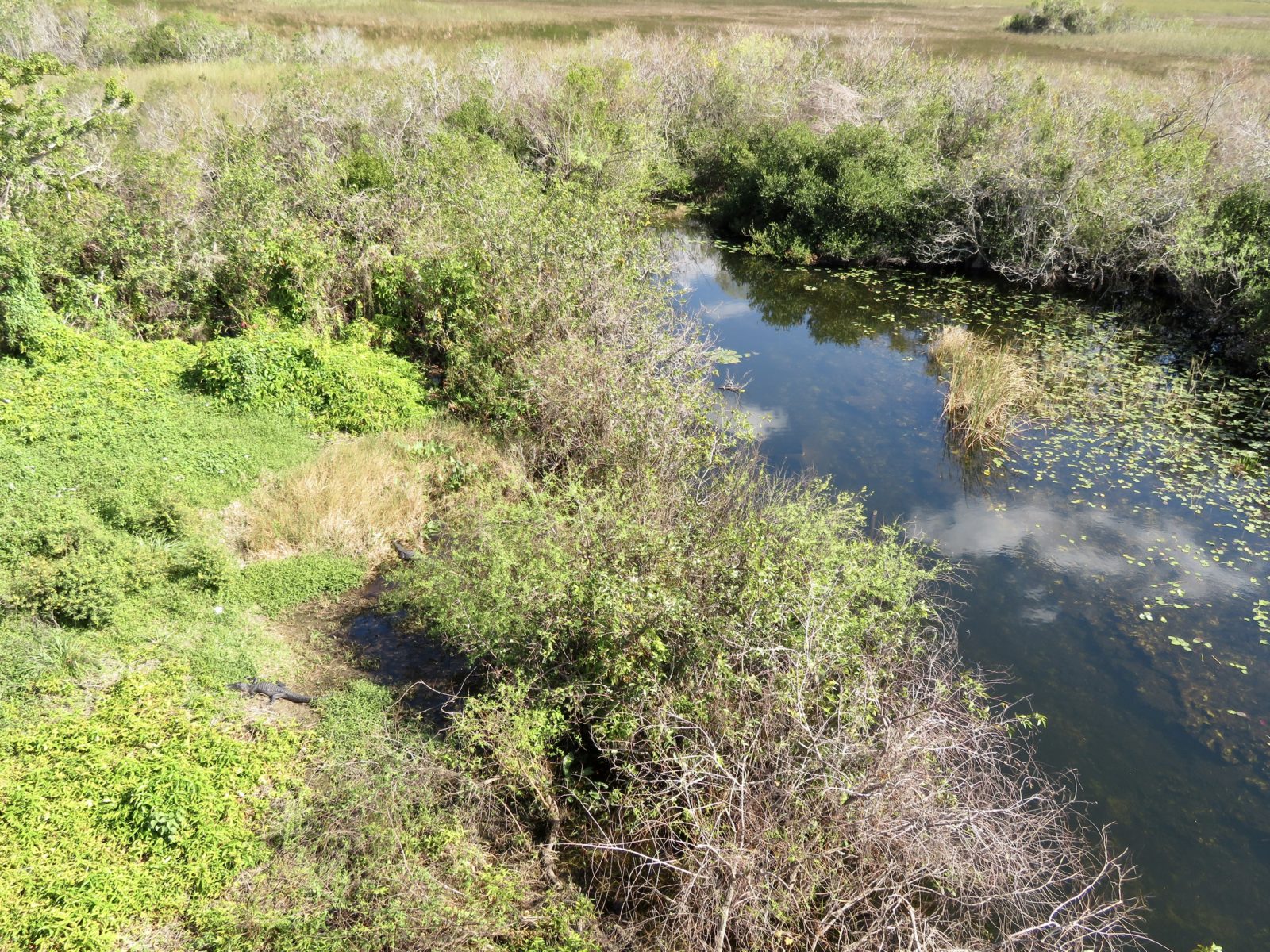 We rested, enjoyed the views, and ate our snacks. We watched as a tram full of visitors showed up, and knew our peace and quiet was about to be disrupted, so we headed back to the bikes to pedal the remaining 7 miles.

We definitely got more than we bargained for on Shark Valley (Tram Road). Sadly, no sharks were spotted anywhere along this route. Although plenty teeth were seen, none were found. And no animals or humans were harmed in the taking of any of these photos.

But what a tale we pedalled, eh? 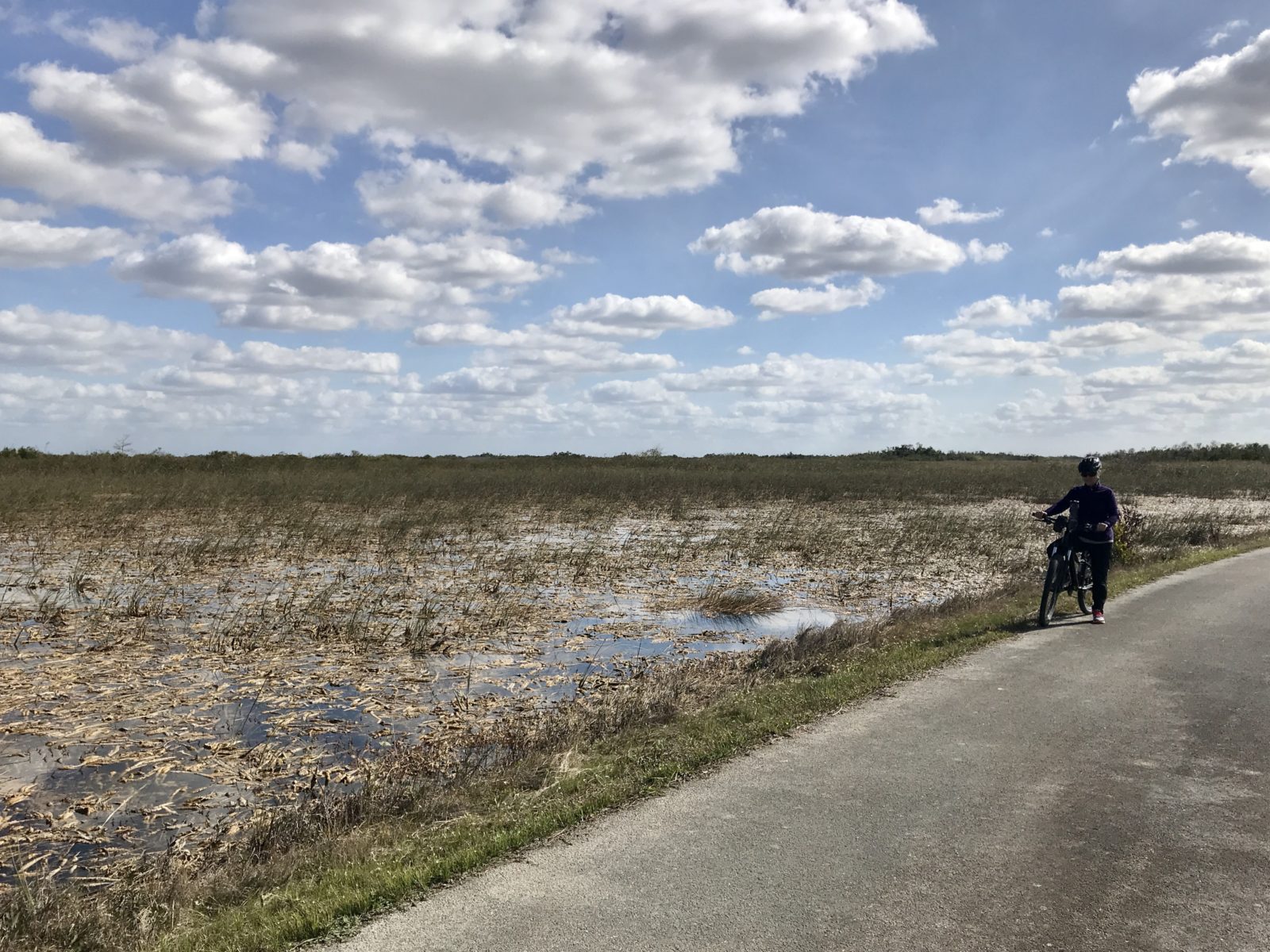