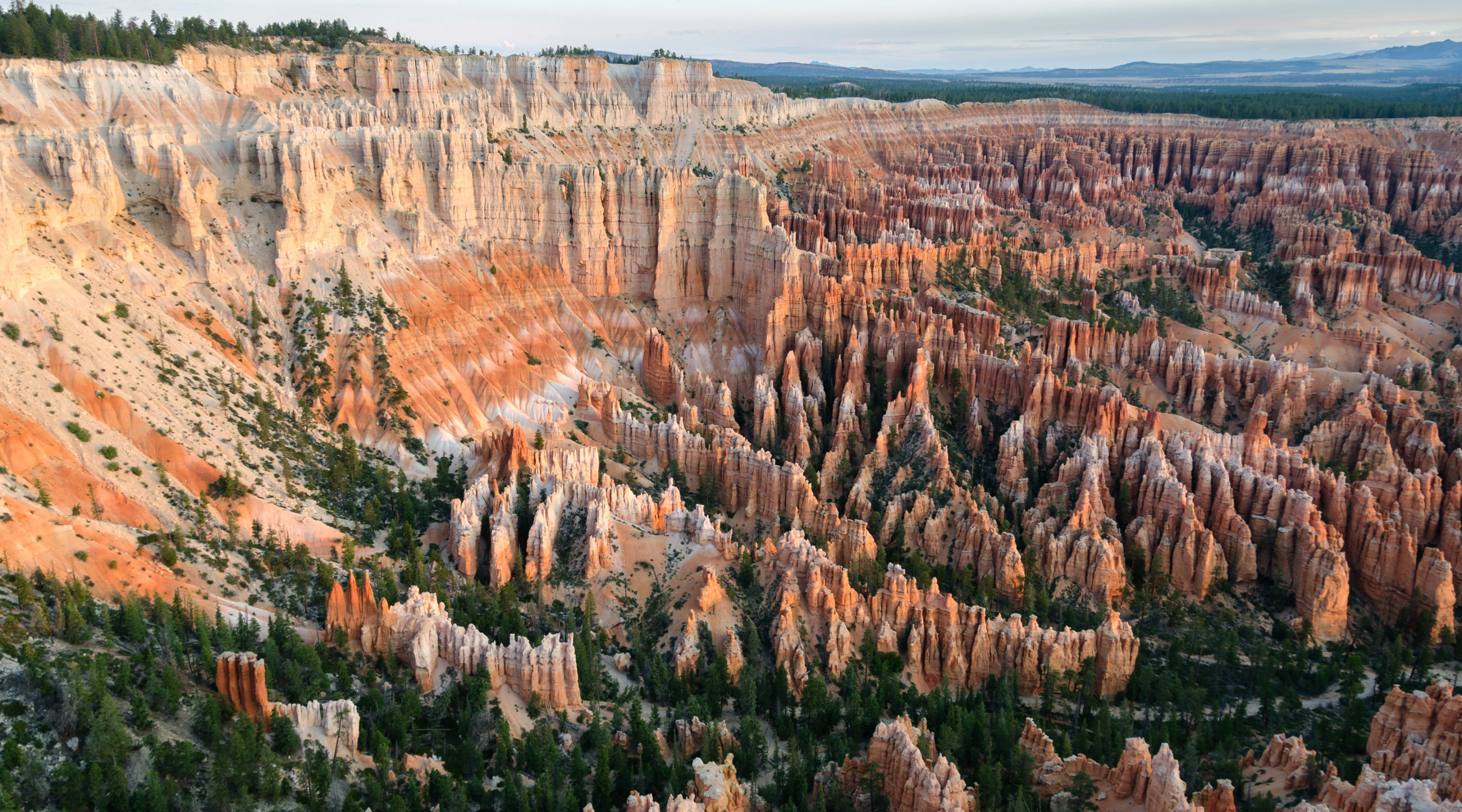 We were so out of touch with the real world we had to ask our daughter Sue to tell us the day and the date. The Nook wasn’t working and no cell either, but we didn’t care because we were so in love with this fantasy world of natural wonders.

Turned out we had to go back through Zion to get to Bryce, which meant Allie had those roads and bridges again, and I had another view of Zion’s magnificence. I thrilled while he sweated. Didn’t seem quite fair. But then again, life isn’t always fair. How small we are – all 24 feet of our RV and its occupants.

Speaking of small, I’ve been thinking about living small while seeing large. We don’t have to make many decisions with this style of living since we have only two cups, four plates, a saucepan and a fry pan, 7 t-shirts – you get the picture. When we run out of clothes we do laundry and when we run out of fresh veggies and milk, we go marketing (that’s for you, Martha). When we don’t eat out, which is sometimes not possible, then it’s Nutri for Al and Susan’s soup for me.

TIP: When you provision your van, take only what you need: fresh food for three days, a freezer stocked with ready-to-eat food, peanut butter and jelly and good bread, some hard cheese and crackers, a variety of clothing layers for different climates, bottled water for a week, a good first aid kit, a working cell phone, e-books or real books, a portable computer or iPad, and a journal. This is all from my point of view. I’m sure Allie would have a completely different list, i.e. a hammer, a wrench, a bottle of scotch, a jar of nuts, fluid for the diesel, etc.

The feasts for the eye are boundless and bountiful. In Bryce Canyon we were embedded in the Dixie National Forest where we watched the trees change from Ponderosa Pine to Spruce, Fir and Aspen. I’d like you to think I knew that at the time, but even though we marvelled at the changing forest, I didn’t discover the species until I read the book later. 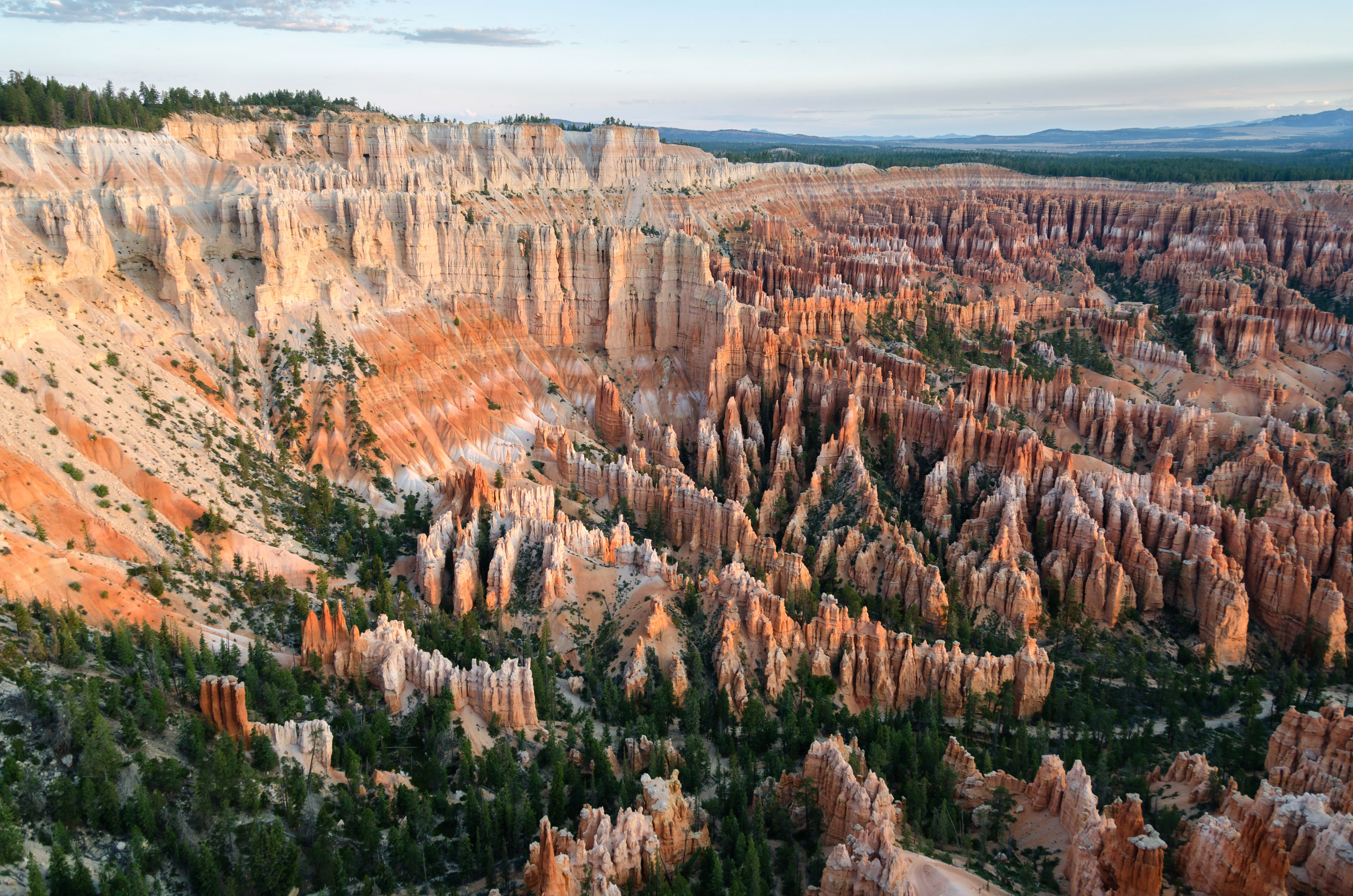 In Bryce we travelled an 18-mile scenic rim road to Yovimpa Point, as directed by the Ranger, then turned back to stop at most of the viewing points along the road. We reveled in hoodoos (spellcasters), natural stone statuary, a natural bridge created by the erosion of wind and water. Views of Arizona and New Mexico culminated in the pride of the park. Red Canyon, just outside of Bryce, shined with sunlight glowing over the rock. Of all the places we’ve been so far, Allie thought this was the most wondrous. I agree it was wondrous, but I found Zion and Sedona equally wondrous.

We parked in the first KOA campground we’ve been in and found it delightful. There were campers in tents, campers in bungalows and RVers like us. We were planning to leave for the Arches and Canyonlands the following day.

Best Laid Plans. Up early, cabin locked up tight, seat belts fastened and NO battery. The key wouldn’t turn in the ignition and perhaps it was the frozen fingers (52 degrees in the cabin and 42 degrees outside) in Sanguitch UT. But no, it was the real thing, no battery. An AAA call and a promise to be here in three quarters of an hour, Mountain time.

While we waited I caught up on emails and started the day’s log. We had planned on the Arches and Canyonland for the day, but of course it was dependent on the Sabel and AAA. Through Bryce the altitude went from 2300 feet to 9100 feet and back, and the temperature went from a high seventy to a low 38. It’s amazing to experience such changes, but the body does seem to adjust. Allie continued to keep me healthy through the sheer force of his personality. We ate well, we slept long hours, we kept warm and we surely kept active.

At a lovely RV park in Moab UT after an exhausting day, we reviewed our lowlight. AAA showed up as promised, charged the battery and off we went. But, fate was not done with us yet. A buzzer went off and several indicators showed up on the dashboard. Allie turned into the nearest gas station, filled the tank, and read the book. A mechanic came over, opened the hood, said we needed Diesel exhaust fluid (something about environmental standards), we said fine, he said he didn’t have it, but if we went to Lizzie and Charlie’s RV Park in Marysdale (population 408) they’d help us. They were charming, but they couldn’t help us.

But if we went to Richfield, 20 miles up the road, and found Ferguson’s right in back of KMart, they would help us. We found Jorgensons (close enough) right in back of KMart, and after one or two guys looked at the problem, they filled it with the fluid, the indicators went off, and all should have been well, but it turned out that the first nice guy who couldn’t help us had broken one of the struts that holds up the hood, so it took one guy to hold the hood and one to fill up he fluid. By noon all was well with the Sabel. I told Allie she was feeling neglected, she had given us over 2,000 good miles, and now it was her turn for attention. Pretty tired and more than disrupted by that time, we decided there was only one thing to do; rearrange the itinerary (skip the Canyons National Park), stop for a good lunch and then go to The Arches, which was only a few miles from our RV park. 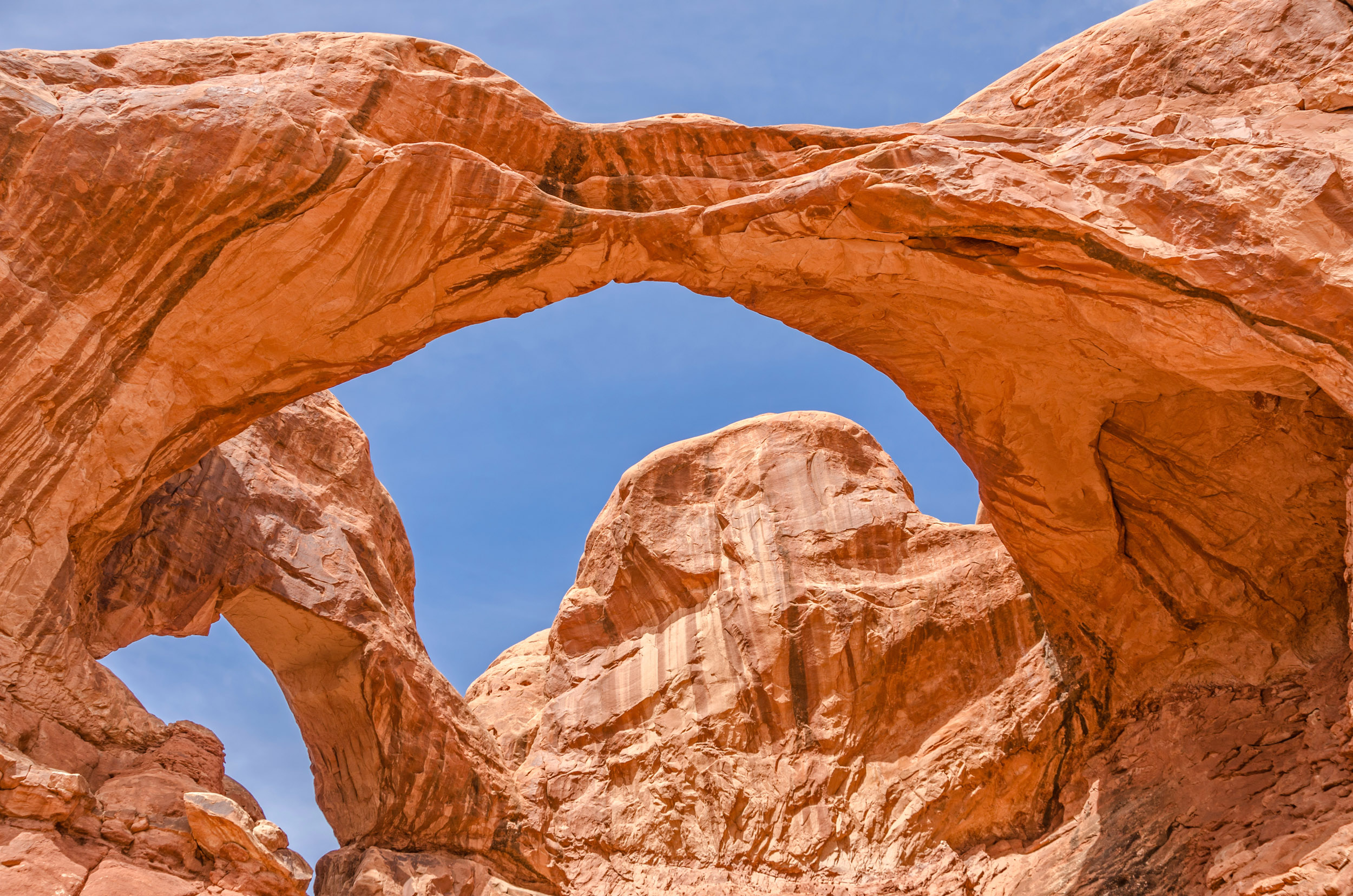 The beauty and wonder of The Arches and the Utah scenery en route, made up for the morning. Mountains of rock towered over us on both sides of the highway, beige and pink and red clay, a sky nearly blocked by the structures, the Big Rock Candy Mountain (truly) and even a place called Bountiful.

We were here for two days, where we explored Moab. We had glorious scenery, since we were just outside of The Arches, and here we recuperated from the Best Laid Plans Day.