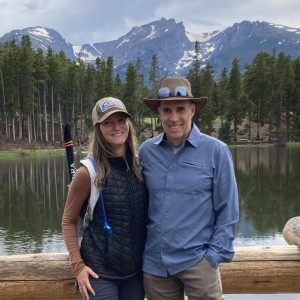 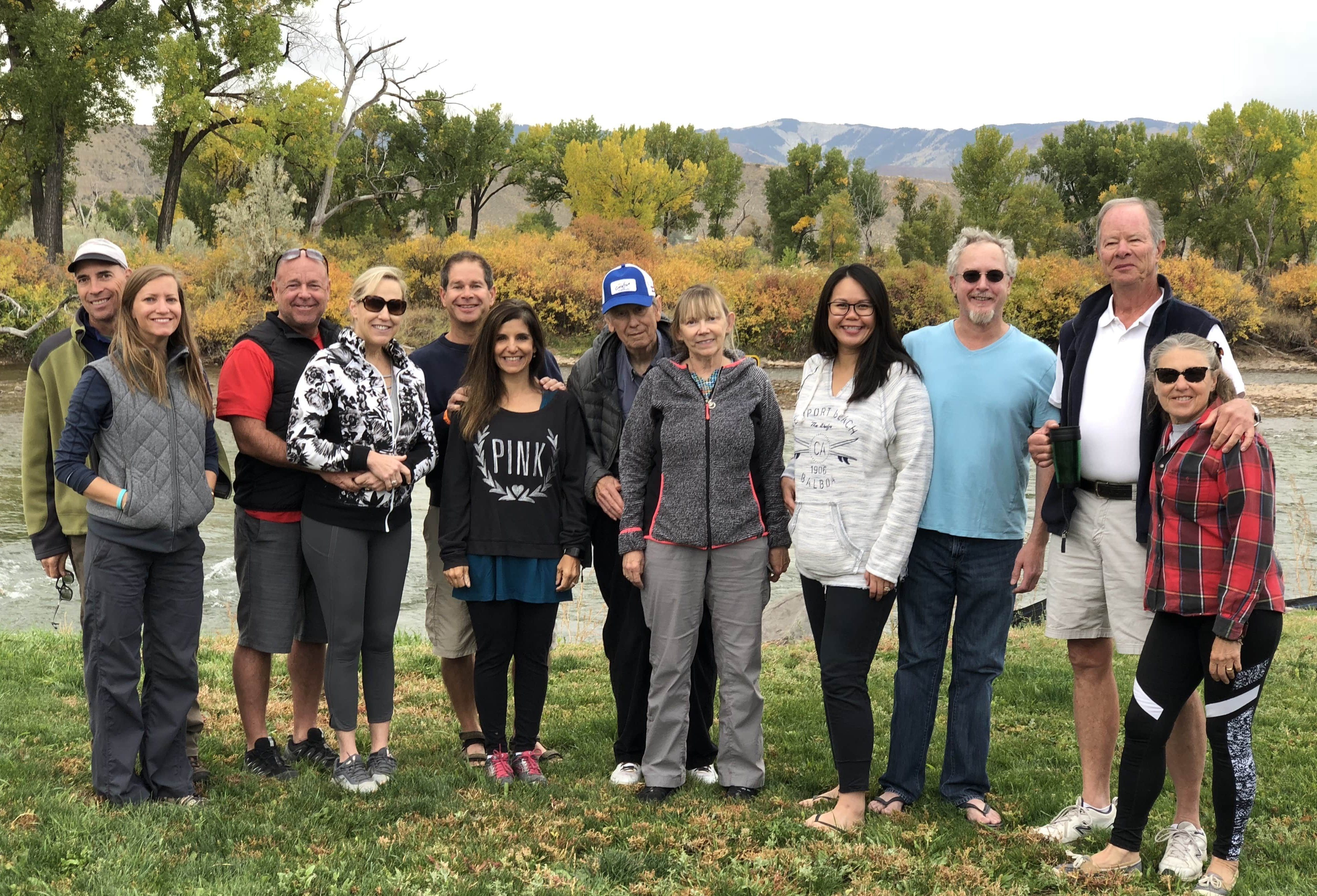 What was initially planned as a weekend getaway quickly transformed itself into the Rocky Mountain LTVers group Autumn Rally.

With unpredictable weather and winter approaching quickly in the Rocky Mountain states, we knew we had to act fast to organize a fall gathering.  We lucked out in that we found an RV park near Glenwood Springs, CO that could accommodate a large group of RVs if necessary and provided us with many activity options.  Glenwood Springs is a small resort town in Colorado about 30 miles from Aspen and is known for its many mineral hot springs. 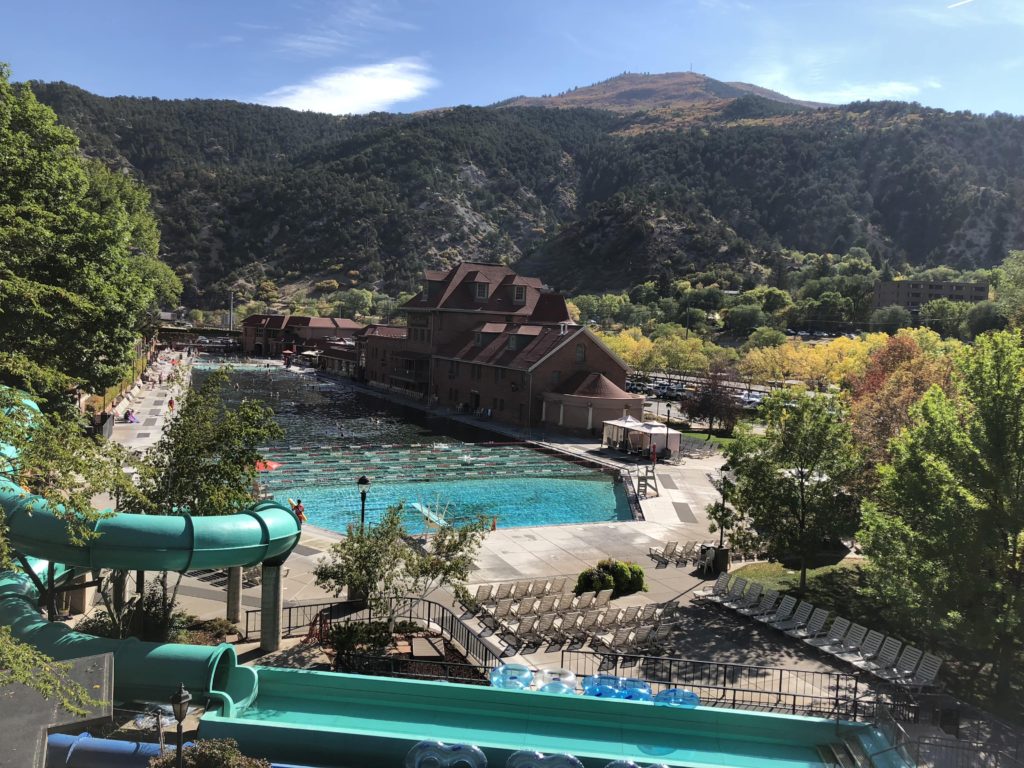 I can’t say enough about my wife, but she did a great job taking the lead and organizing this rally!  Teresa promptly contacted the RV park and reserved some spots.  While she did the Facebook announcements, I handled the emailers.  We planned the rally for 4 days, beginning on Friday, September 29th.  Our RV park location was at Glenwood Springs West/Colorado River KOA, which is not actually in Glenwood Springs but about 20 miles west of there, in a tiny town called Silt.  Even though the town is small, it was host one of the nicest RV parks Teresa and I have been to.  Many of us were lucky enough to get spots located right on the edge of the Colorado River.  The river spots provided a covered gazebo type structure, their own fire pit and a propane BBQ grill, and of course full hookups with cable and Wifi. 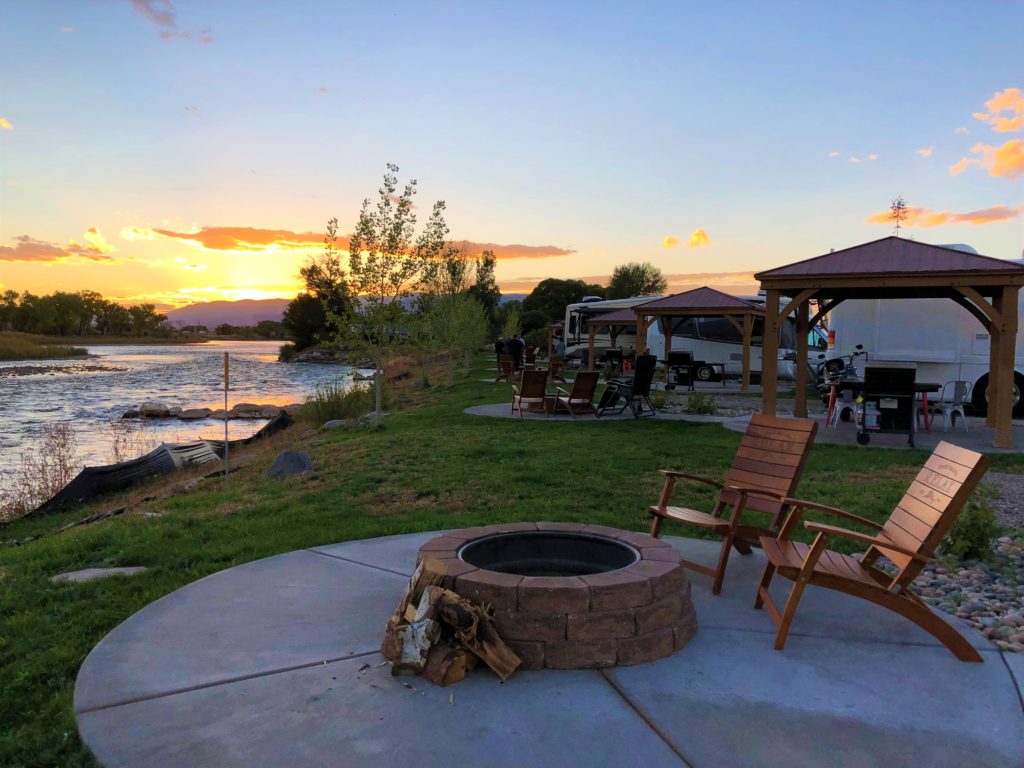 In total, we had six units, all couples.  It was a slightly small gathering, mostly due to short notice on our part, but I believe turned out to be a great time for everyone!  We had 4 couples from Colorado but also Utah and Texas represented as well.  The Texas couple, Mia and Scott, we had met at the LTV Rally in Winkler just a few weeks before.

The rally officially began Saturday, though one couple, Michelle and Karim came in a day early to visit Maroon Bells.  If you’ve never seen Maroon Bells and are in that area of Colorado, you won’t want to miss it.  They don’t allow cars to drive up, but they do provide shuttles.  We began the rally with a Meet & Greet Happy Hour at our RV site with BYOB and snacks.  We didn’t know it, but we’d also have a couple of bald eagles joining us… from across the river.  For dinner we had pizza delivered from the local pizza shop and followed that with fireside smores.  It was a nice way to start the rally and meet everyone… the weather was perfect and I was able to get a little fishing in too!

Sunday provided a mixture of activities.  We tried to provide something for everyone, regardless of their interest.  One couple, Helene and Curtis walked to the town of Silt and enjoyed the shops and coffee.  Another couple, our Texas friends, still had to run some errands in Glenwood Springs so did their own thing.  One great thing about the LTVs is they drive much like a car and can be maneuvered around town quite easily.  Michelle, Karim, Eric, and Meg also drove their vehicles to Glenwood Springs, but they took their bikes and would meet up with the rest of us.  The ‘rest of us’ caught the shuttle bus in Silt and took the bus to Glenwood Springs.  Marie and John also had their bikes and luckily for them, the bus had a bike rack which would accommodate their bikes.  Teresa was ahead of the game and bought us all bus passes to cover the expense. 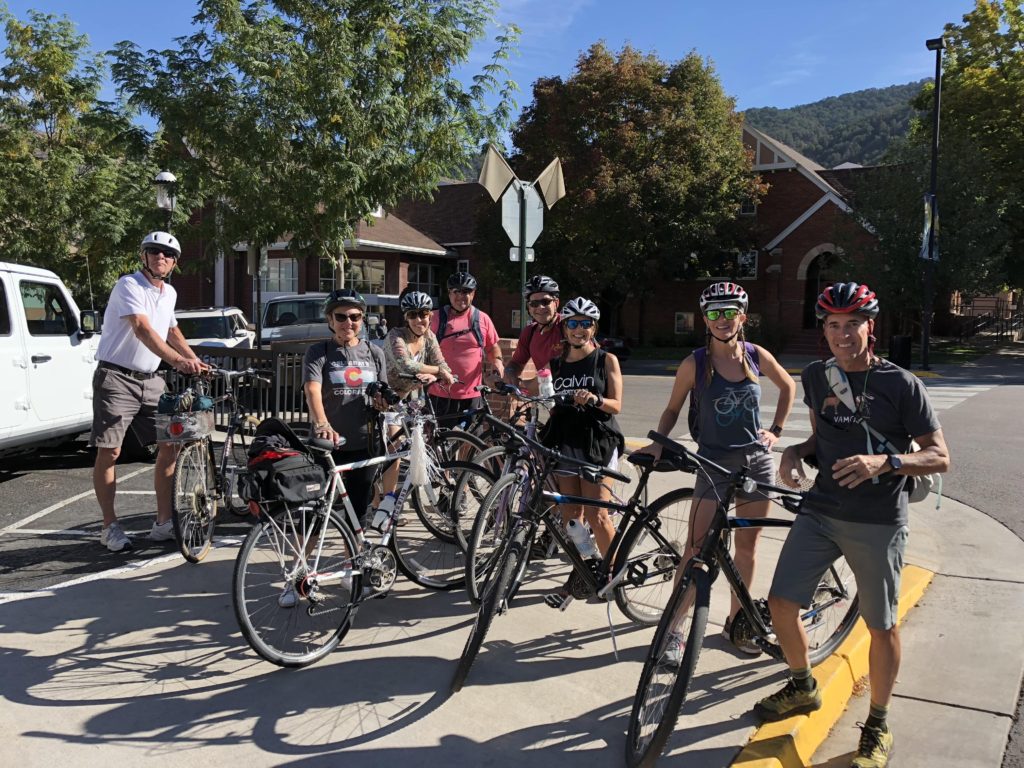 Once we arrived in Glenwood Springs, eight of us met at the bike shop.  Teresa and I rented bikes and then we all began the 10-mile ride to Hanging Lake Trail Head where our hike would begin.  The bike path to Hanging Lake goes through the canyon and follows the Colorado River.  The ride is beautiful!  We stopped quite a few times and finally had to stop ourselves from stopping and taking pictures or we’d never make it.  Once we reached the trailhead, five of us started the hike.  Michelle and Karim headed back to town to get some hot springtime, while John hung out by the river and read a book.  The hike itself is relatively short, three miles round trip, but it is steep!

Views on the trail and Hanging Lake

After the hike, the trip back to Glenwood Springs on the bikes was quite the adventure!  The shuttle bus back to Silt at this time of year only runs a limited amount of time.  If we didn’t make the next shuttle, we’d be stuck in Glenwood until about 7 pm…. way past our planned Autumn Harvest Potluck get together.  With that, I took off ahead of everyone since I HAD to make the bus so that I could also make Teresa and my dinner for the potluck.  Teresa stayed with the rest of the group and motivated them to go fast… and keep going!  Once they got back to town, Marie and John barely made it to the bus with about 30 seconds to spare… and unfortunately, Teresa missed it after checking her rental bike back in. 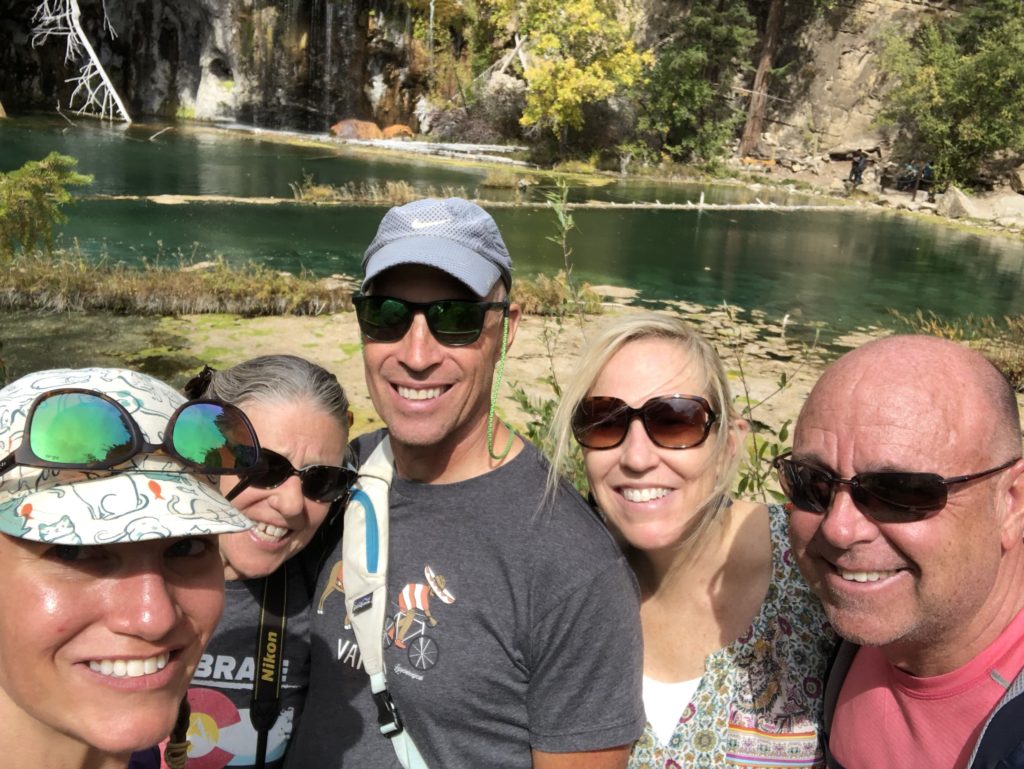 The crew at Hanging Lake

All in all… it turned out well for her.  She joined Meg and Eric since they had driven their toad (jeep) and the three of them headed to hot springs before heading back to the RV park.  It also provided some humorous storytelling that night… about how they didn’t realize bathing attire was optional at the hot springs they found.

We finished the day with a potluck dinner.  The weather was perfect so we all gathered around our RV spot again and enjoyed the food and company!  I think I can say we were all exhausted by the eventful day… and the delicious food everyone made!  We ended the evening by gifting ‘door prizes’ that we made into a contest about LTV trivia and then sat around the fire pit. 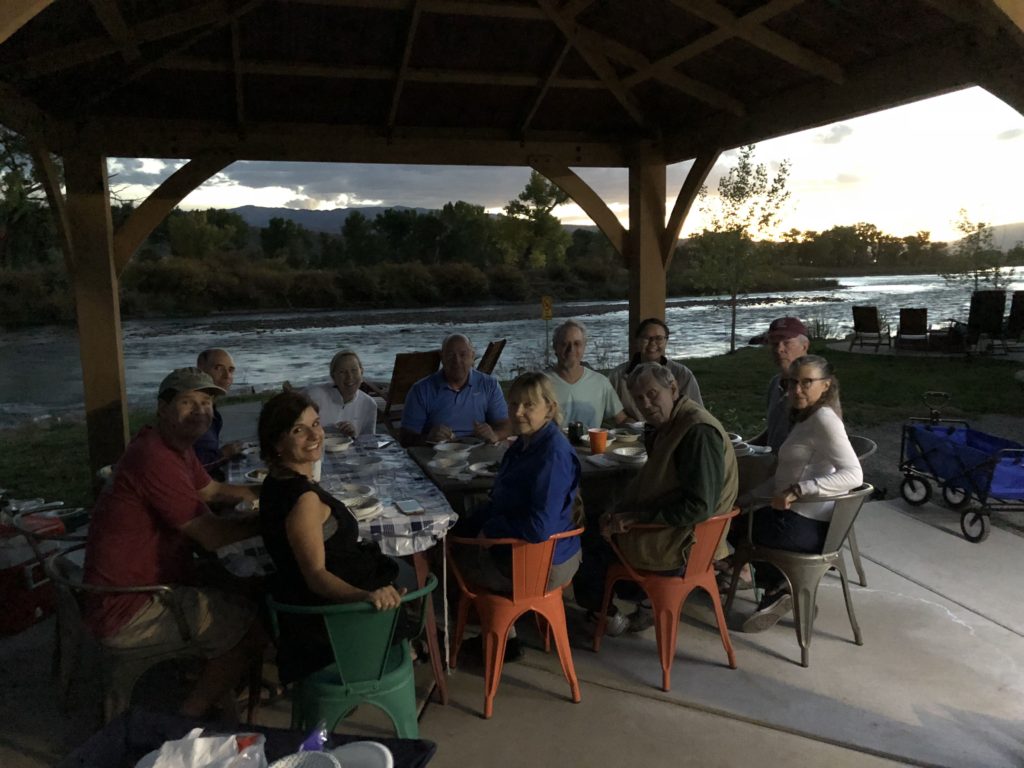 The day started with group yoga which Marie Aliotta graciously led.  It was open to anyone who wished to participate, which most individuals did except for a few of us guys.  She led the group through about an entire one-hour session with the river as the backdrop.

After yoga, we all gathered for a potluck breakfast.  Everyone brought a little something and it turned out really well!  We had everything from eggs, bacon, and fruits to pastries purchased at the local bakery and muesli with lots of fixings provided by Meg… and of course coffee.  After breakfast, everyone was free to do as they wished.  Two couples had to head back this day, some went on hikes and a couple went back to the hot springs.  Myself… I fished.

That evening we did another Happy Hour gathering combined with touring each others LTVs… and seeing each other’s customization or nifty gadgets.  For dinner, we finished the day with leftovers from the previous day’s potluck.

This was the last day of the rally.  Some individuals left early to get a start on the driving… others of us dragged a bit before heading out.  Teresa and I weren’t in any rush to take Pedro back to his storage location, so we headed into Glenwood Springs and went to the large hot springs resort and soaked in the mineral water for a few hours before grabbing lunch.  It was a great way to end the rally… but we sure look forward to our next one! 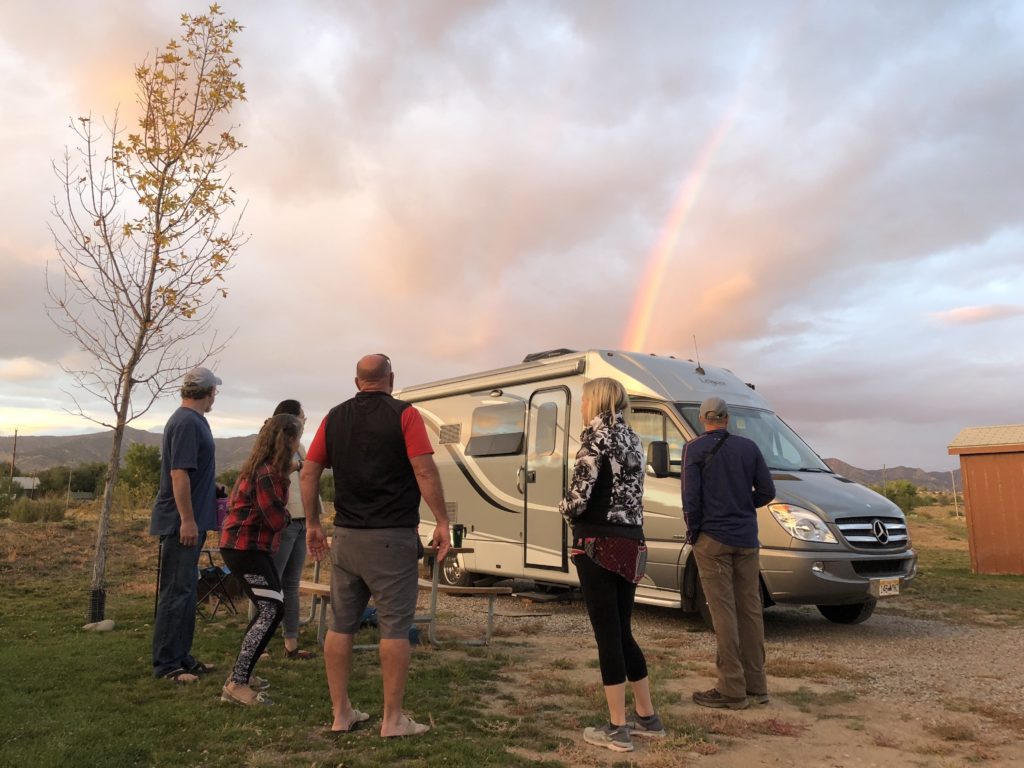 The end of the Rainbow

Teresa and I live in a small town in northern Colorado called Lyons, known as the Gateway to the Rockies. We've been LTV enthusiasts and owners since 2016 and love our Unity Corner Bed. Both of us still work full-time and can do so remotely, so we typically try to plan out longer excursions away from home. Currently, we lead the Rocky Mountain LTV Chapter and love meeting new and old friends at rallies or on the road. We're both very active with cycling and other outdoor activities and find traveling in our LTV the perfect opportunity to make the most of new adventures, friends, and memories.