How Surviving Hurricane Dorian Led Us to a Wonderful Discovery 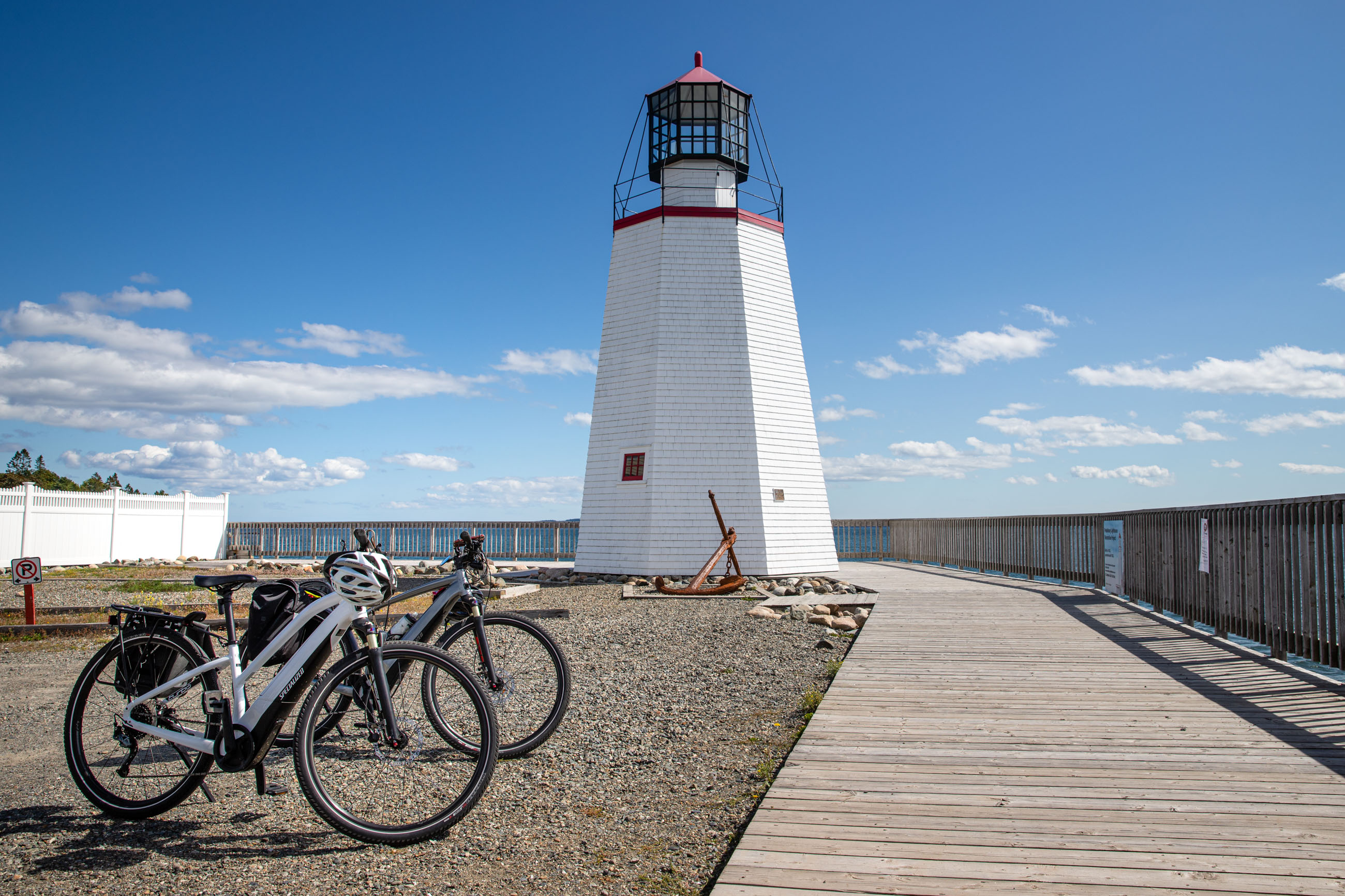 From savage winds to soft, salty breezes – in September of 2019, we took refuge from Hurricane Dorian and fell under the spell of one of our favorite places in Canada, St. Andrews-by-the-Sea. What could be more iconic and more representative of New Brunswick’s tie to the ocean than this beautiful seaside town?

A Change in Plans

What a week! A trip that was planned to be a two-week furlough in the Magdalen Islands with 25 other LTV rigs turned out to be a save-your-skin adventure in hiding our motorhomes from Dorian’s fury. We fortunately came out unscathed from that adventure, and this story is about the beautiful little seaside town that eventually became our refuge for a short week.

With our trip to the Islands cancelled due to the extensive damage caused by the hurricane, some of our group decided to head down New Brunswick’s Bay of Fundy coastline towards St. Andrews. This would be our third visit there, and we were happy to find availability at the Kiwanis Oceanside Campground where we had stayed a couple of years back. This campground sits at the tip of the peninsula where the town lies, and most sites give you at least a glimpse of the ocean. Some of us even had unobstructed ocean views! 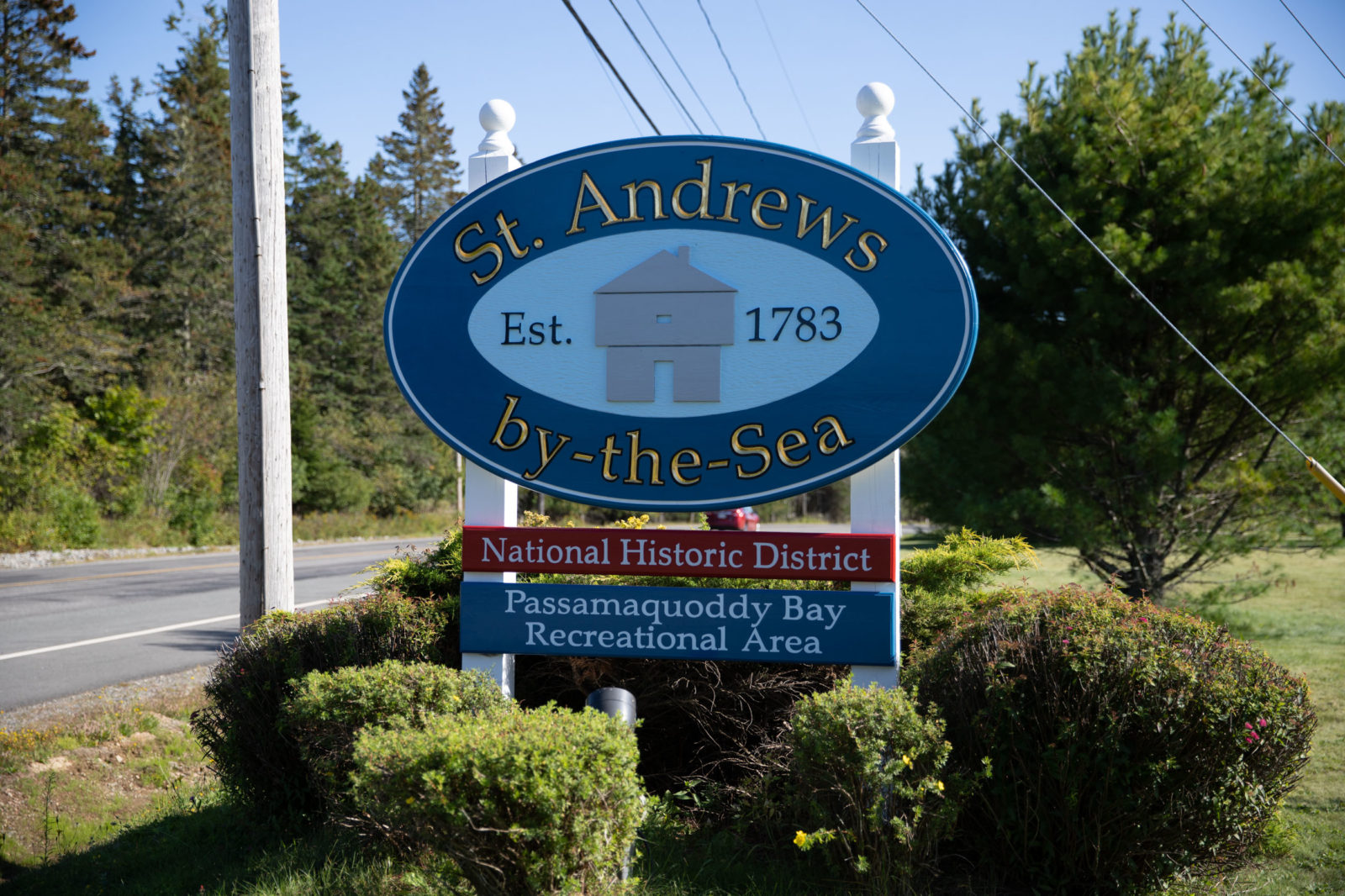 Situated near the northern border of Maine, St. Andrews attracts countless visitors yearly. What used to be an exclusive summer retreat for the rich and famous has transformed itself into a quaint little town with many irresistible shops and restaurants. And if your timing is good, you may experience the weekly seasonal farmer’s market or even witness the arrival of a tall ship in the harbor. We got lucky on both counts.

By the time the group said their goodbyes and split up to head off to different destinations, Joanne and I had already decided we wanted to devote more time to exploring and enjoying the vibe of the town, as our previous visits had been much too short. There is much more to do in the area that will merit another trip, but here’s a look at some of the discoveries during this visit that left us wanting more.

Saturday morning we awoke very early to a day that promised splendor. A cloudless sky tinted in an early morning marmalade glow pressed us to dress quickly and explore the area on our e-bikes. With so much to see, why not start with a visit to Ministers Island?

Just a few kilometers from the city center, access to this island is only possible at low tide. The receding water reveals a wide path of packed rock and sand where cars, trucks, and even buses make their way across the ocean floor to the island for a six-hour maximum stay. Overshooting the timeline to cross back to the mainland will leave you stuck on the island waiting for the next low tide. Keeping your eye on your watch is good practice here! 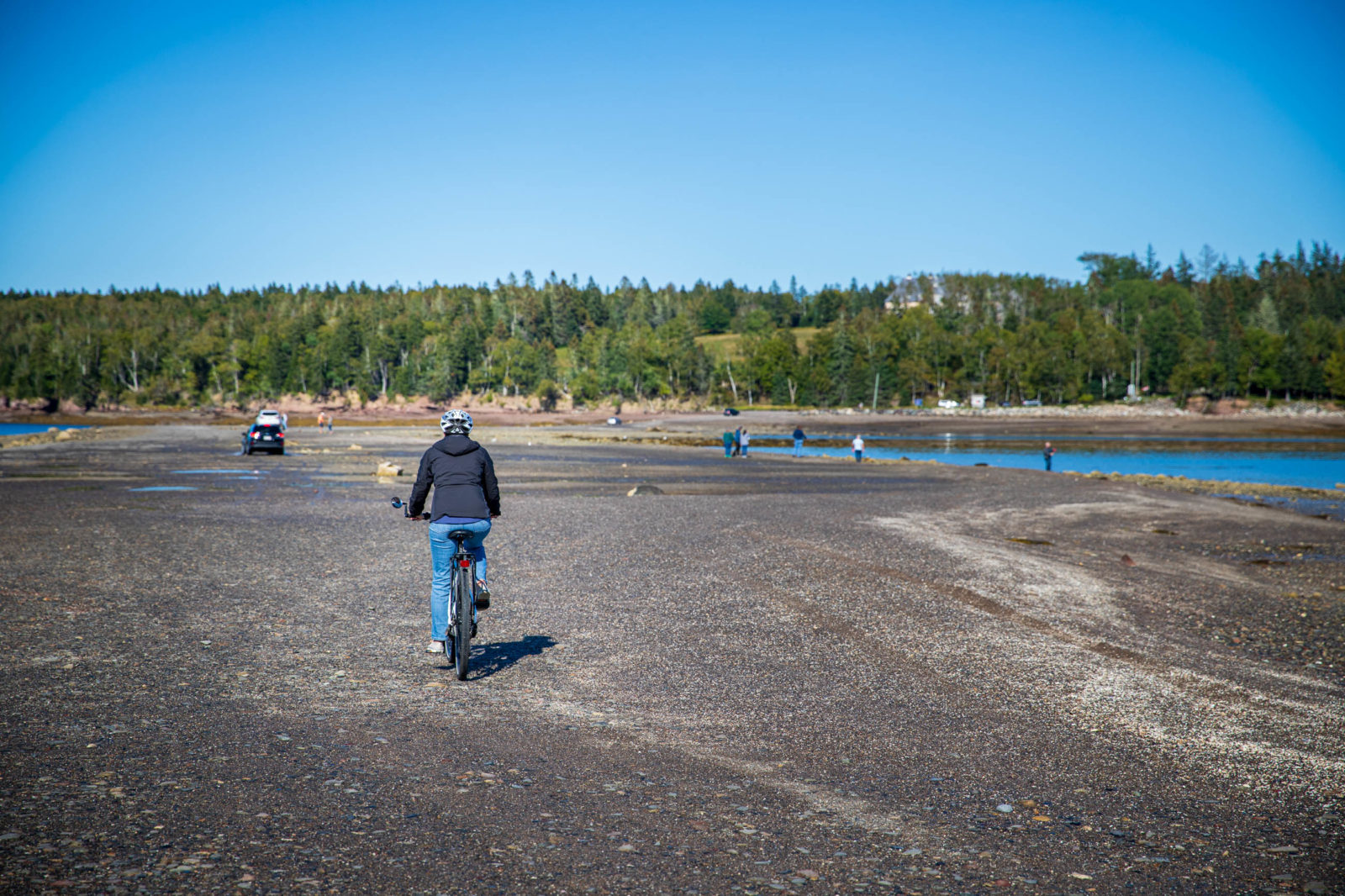 It is a short trip to the island that can become very treacherous if you forget your watch! 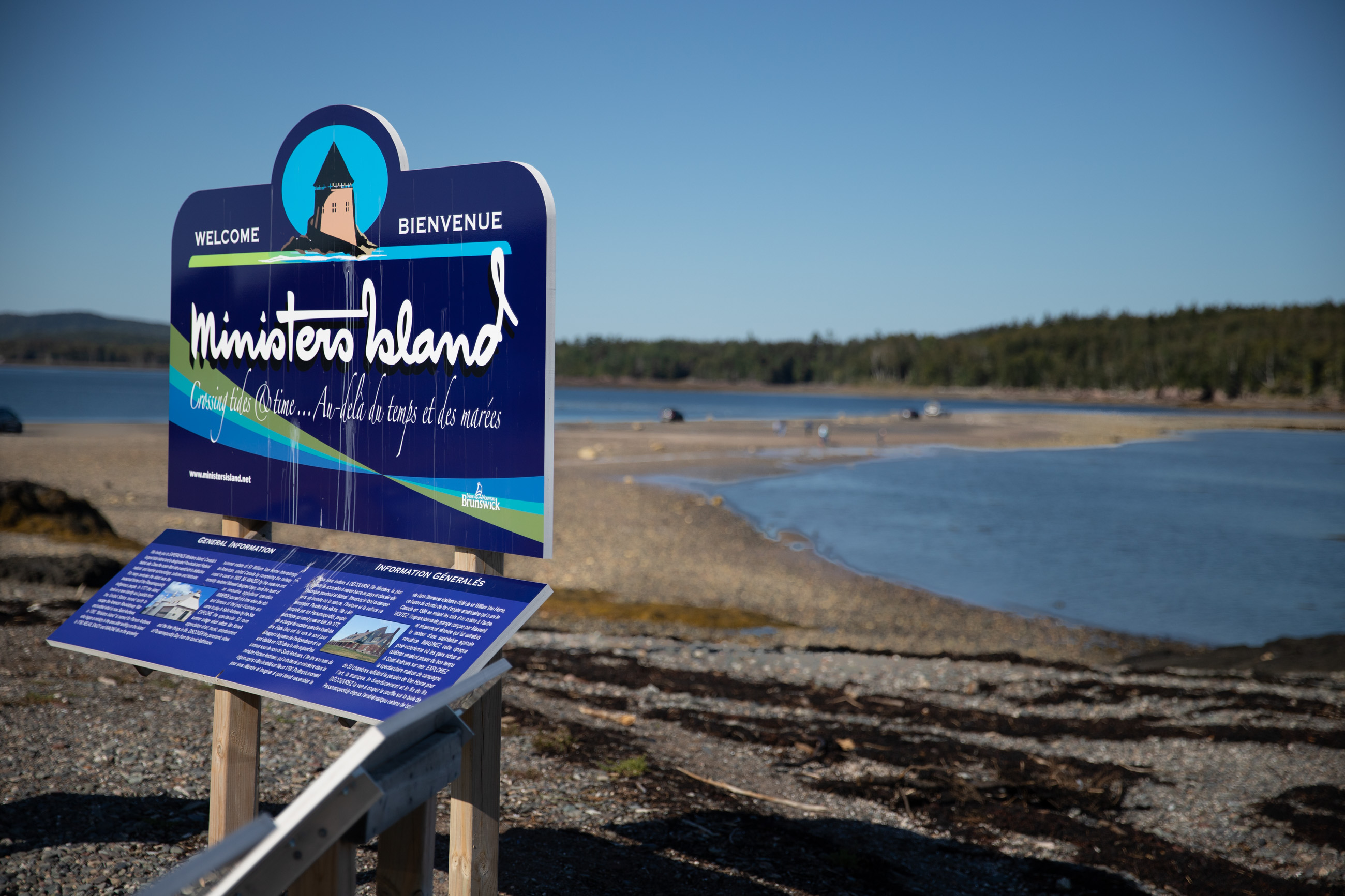 The island is named for Parson Andrews, who began a mission in the area after settling on the island in 1790. However, it was Sir William Van Horne, an American railroad magnate who built a cross-Canada railroad, who left the most visible imprint on the island with an impressive estate and massive barn. 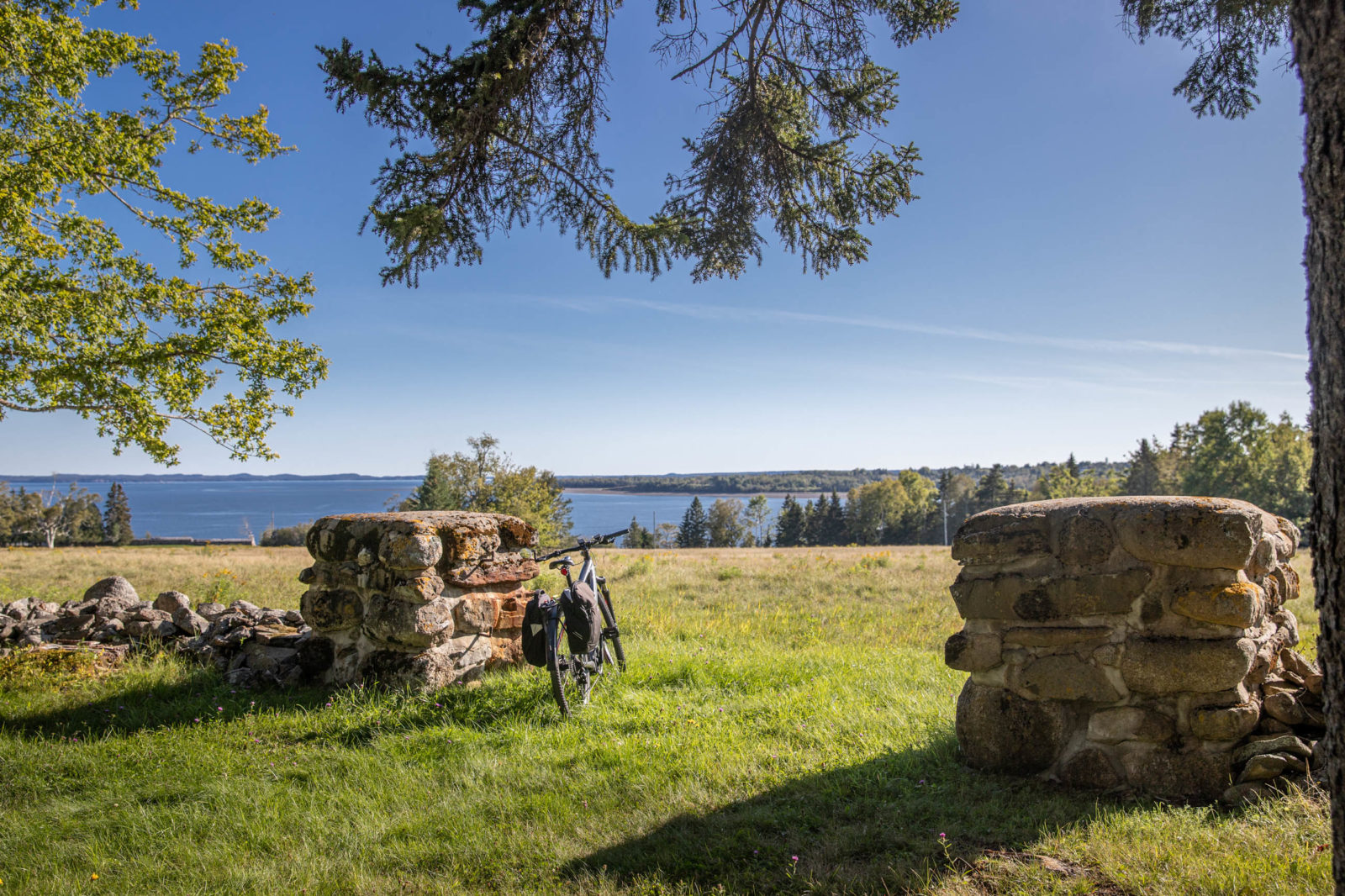 View of the Passamaquoddy Bay from the estate.

Our bike ride on the island’s trails gave us breathtaking views of the Passamaquoddy Bay and took us to the various Van Horne Estate sights, where local staff greeted us and gave detailed information on the 19th century buildings and life in the area at the time. We spent time at the estate’s bathhouse, imagining ourselves at low tide walking to the outdoor saltwater pool and frolicking with the socialites, sipping cocktails that were judiciously shaken but not stirred. 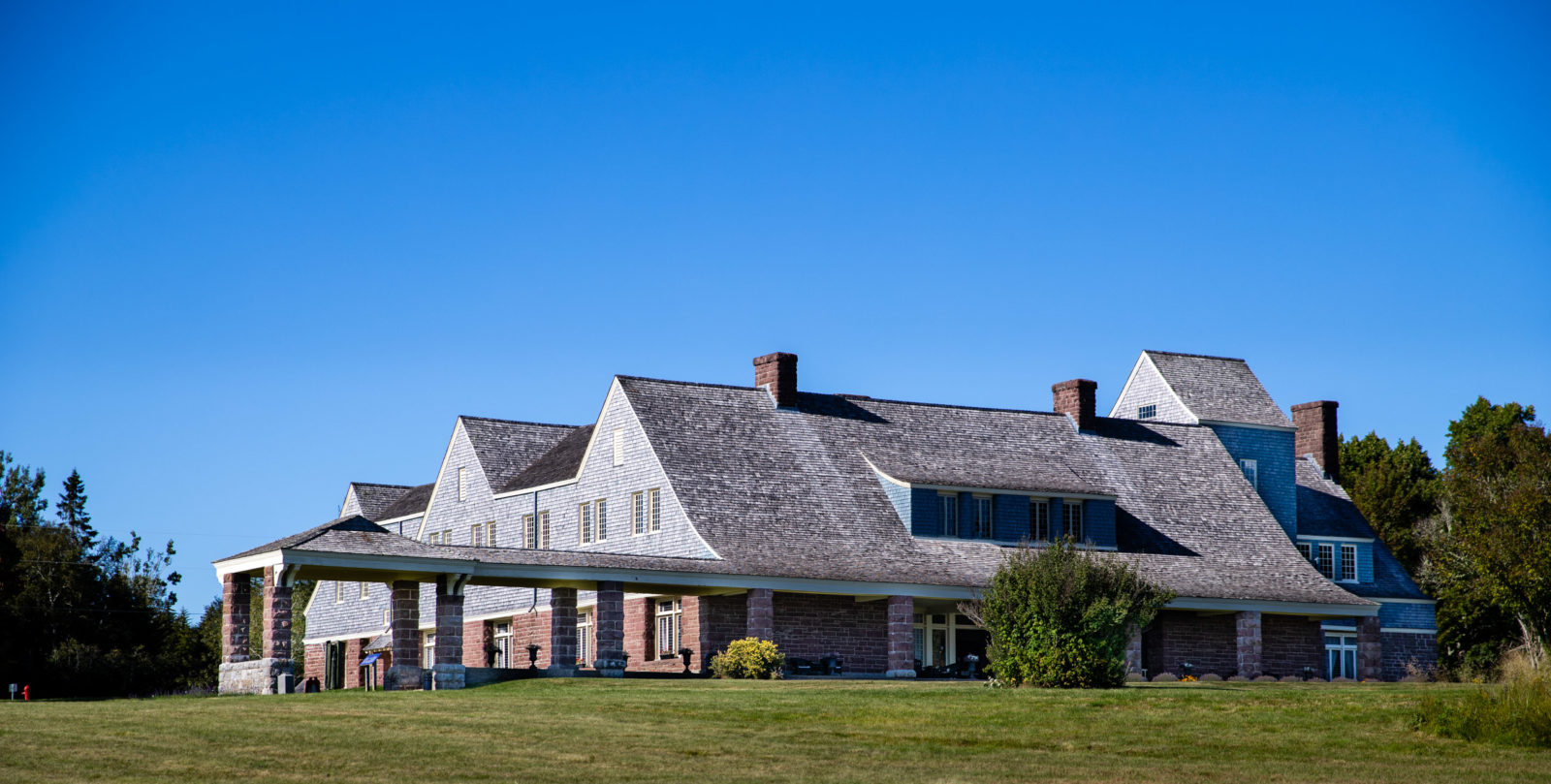 The Van Horne Estate as it stands today, up-kept by visitor’s contributions. 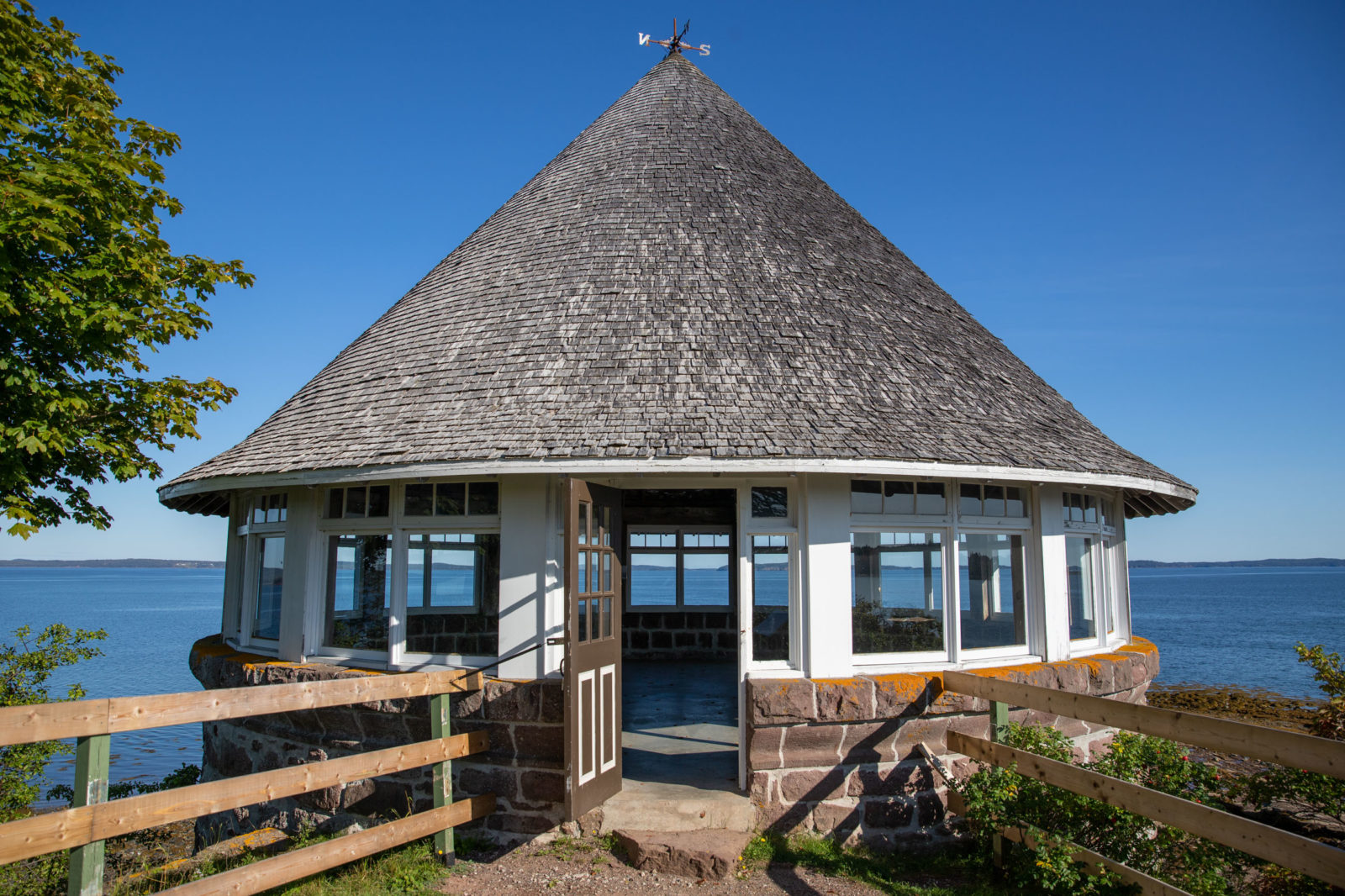 The Bathhouse. A spiral staircase leads to a changing area and finally to the ocean, where a natural saltwater pool awaits.

A visit to the majestic barn is a must. Standing proud on a butte, the three-story 1898 building was recently totally renovated, and the interior framing is remarkable. Originally, it took three trainloads of rough lumber to build. Next door is the ice house and creamery where raw milk was pumped from the barn for the preparation of milk, cream, and butter that would eventually be consumed locally or exported. 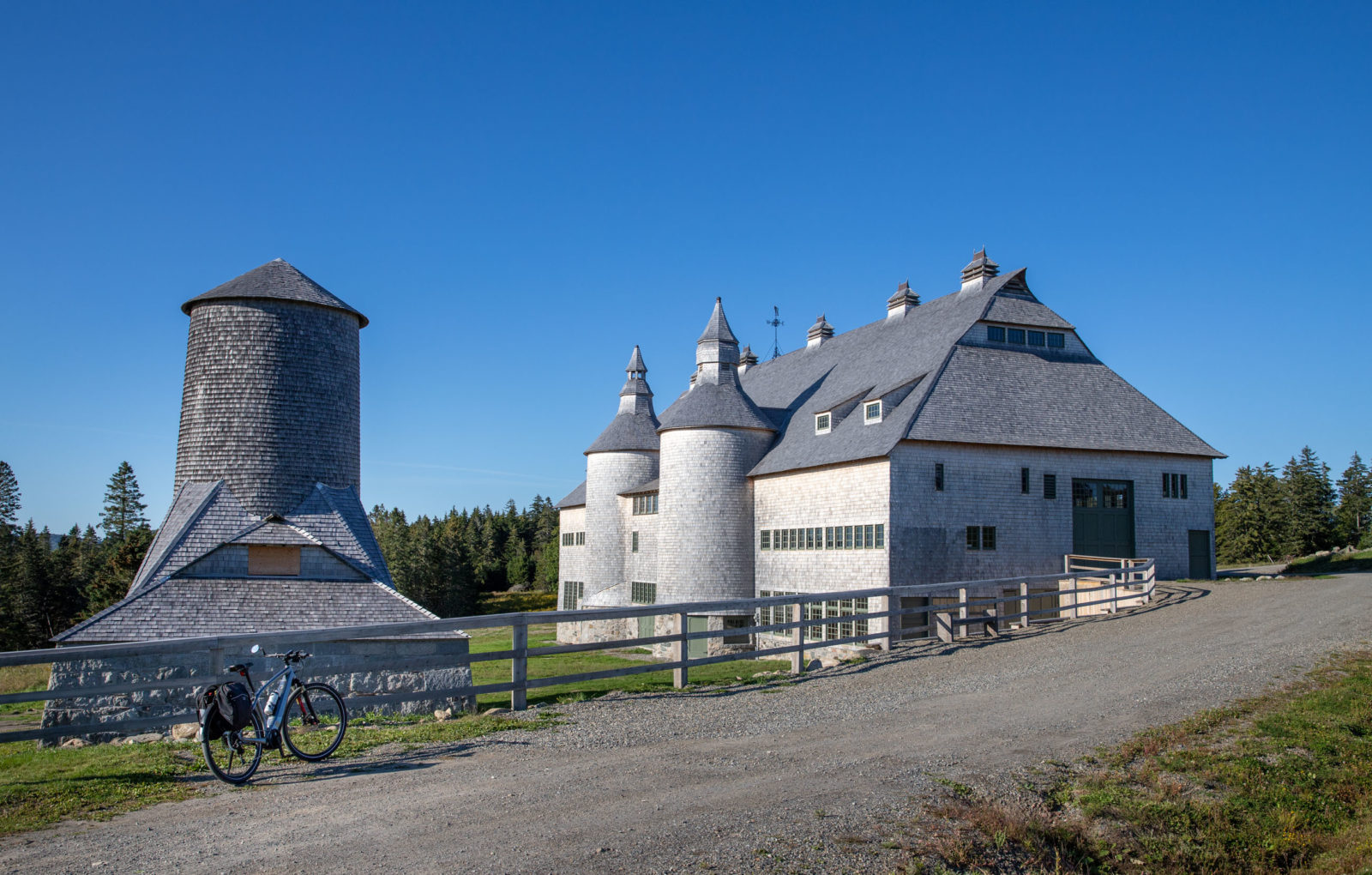 The majestic barn and the adjacent ice house and creamery.

When our time was up on the island, we pedaled back towards the mainland. Squinting at the sun’s glitter on the water shouldering our path, and carefully avoiding the occasional pothole on the ocean floor, we finally cycled up the gentle slope to the jetty on the mainland. With the island growing smaller in our rearview mirrors, we biked up the long hill (gotta love those e-bikes!) and headed back to the town’s center.

By this time, the sun’s rays were slowly starting their descent and the buildings on the town’s main street took on a warm glow. Though almost closing time, shops were still welcoming a steady flow of tourists hunting for those special trinkets to bring back home. Although we were definitely in a tourist-targeted shopping haven, most of St. Andrew’s shops featured original products such as hand-woven sweaters, leather goods, local sculptures, and much more. Quality always beats quantity. 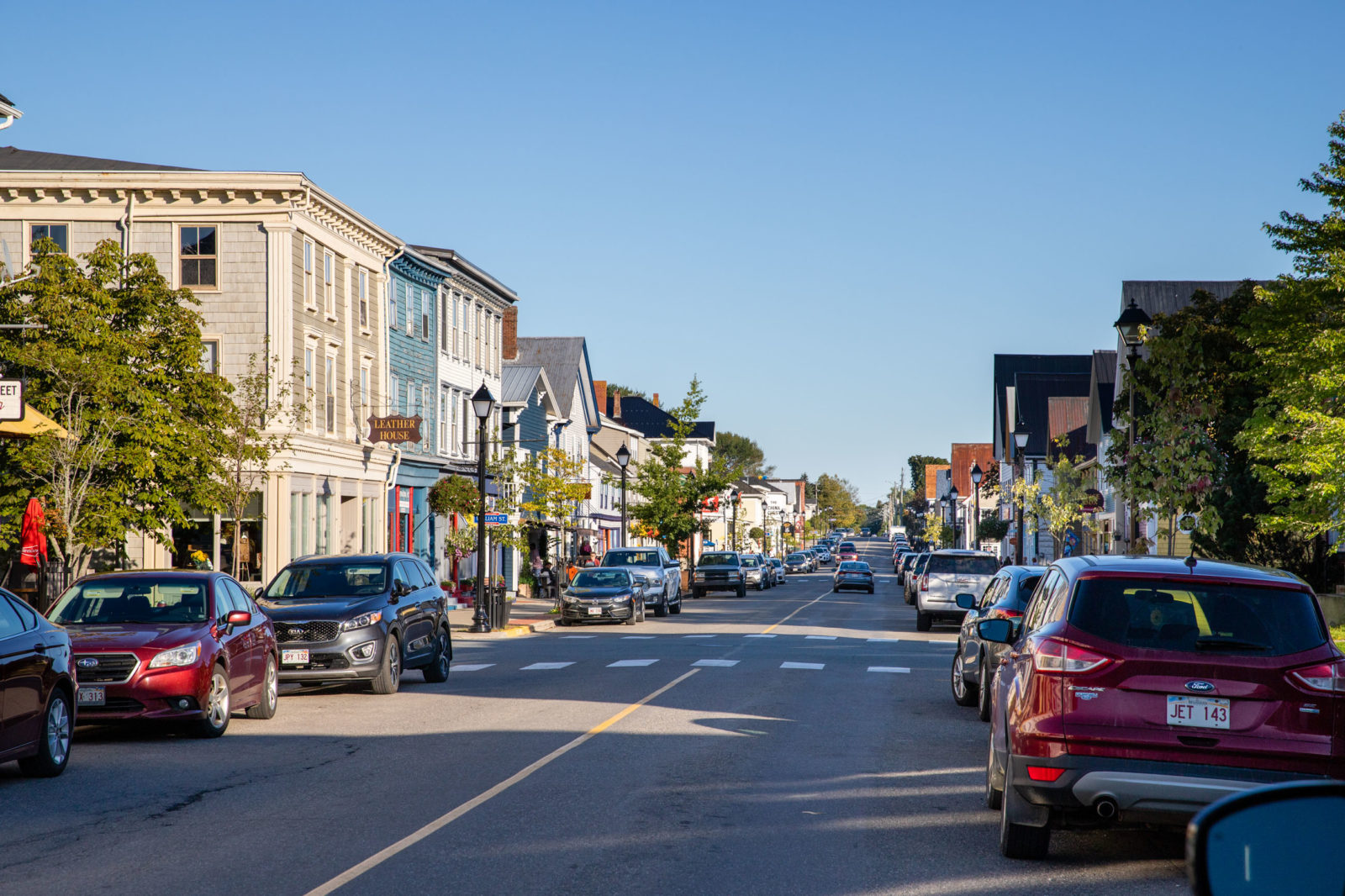 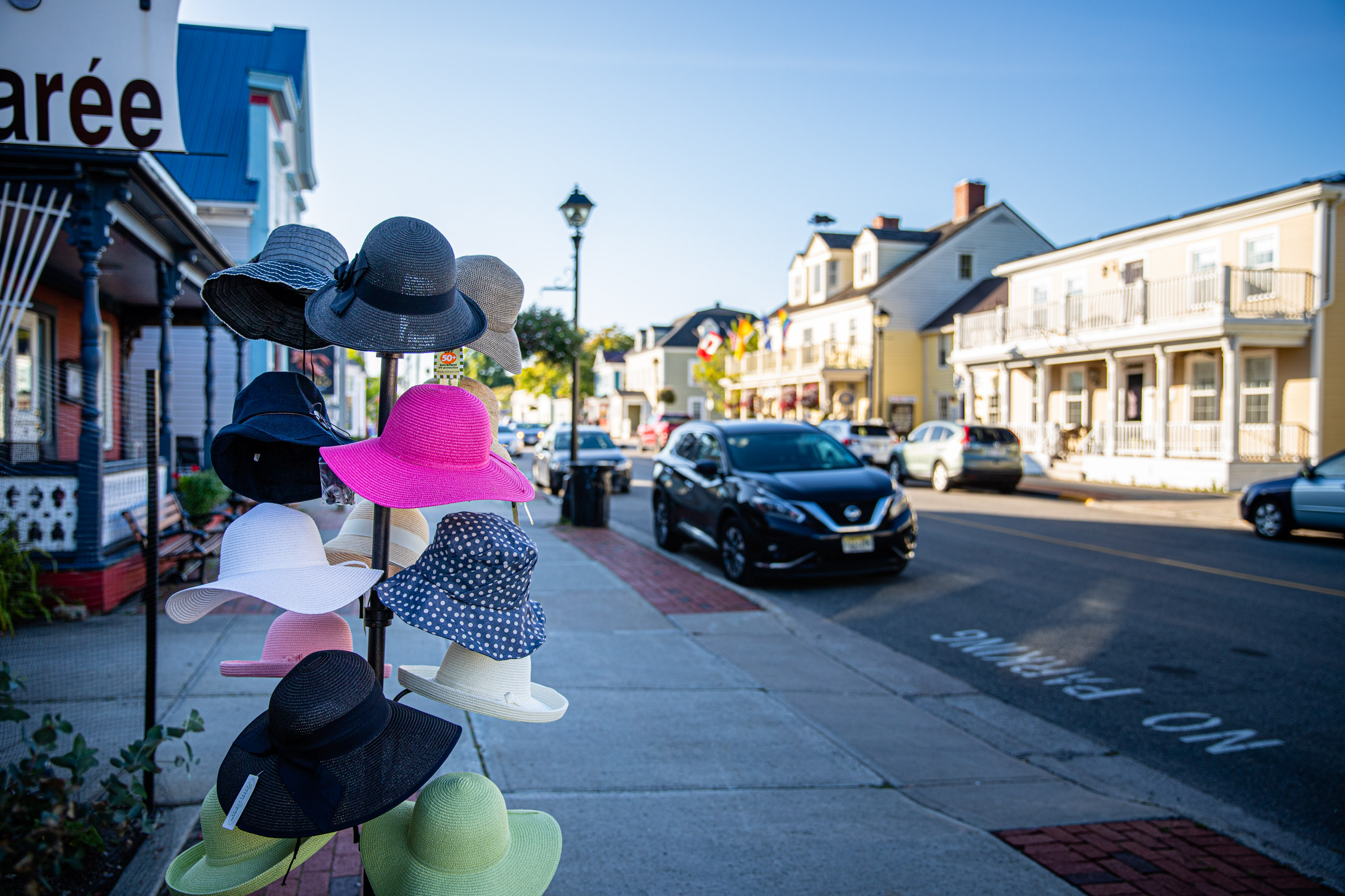 We found a number of good restaurants during our stay, and many are well-rated on TripAdvisor. There are a couple of popular pubs where it can be hard to get a table if you arrive at lunch or dinner time. We also sampled the town’s pizzeria, a throwback to the ’60s with a high counter and wood paneling that could tell many stories. I was struck by the emotions that welled in me, as I couldn’t shake the feeling that this place was part of the town’s long history.

An easy walk from our oceanfront campground, Kingsbrae Garden is touted as being the #1 thing to do while in St. Andrews. 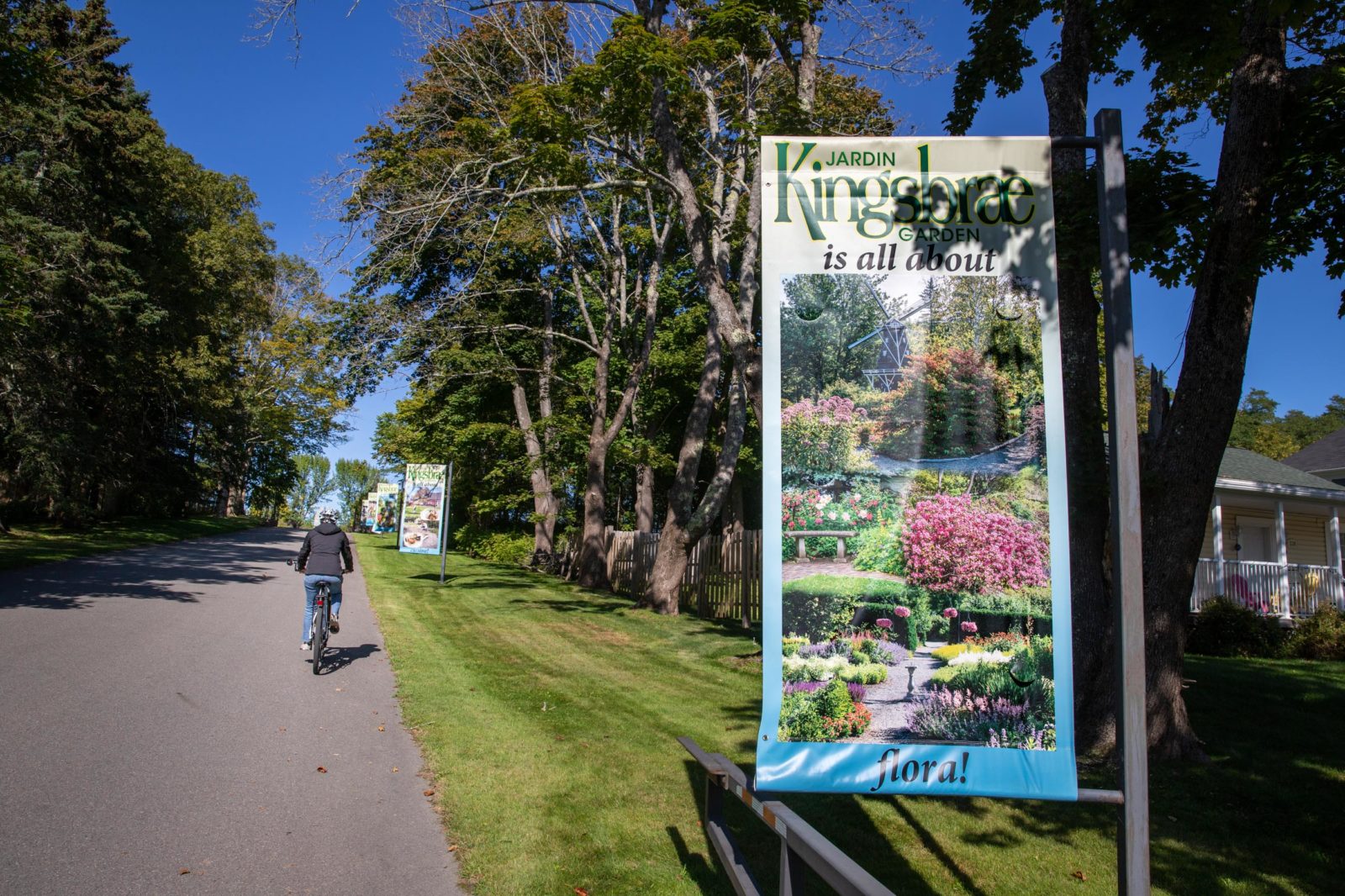 A nice leisurely ride up the main entrance… 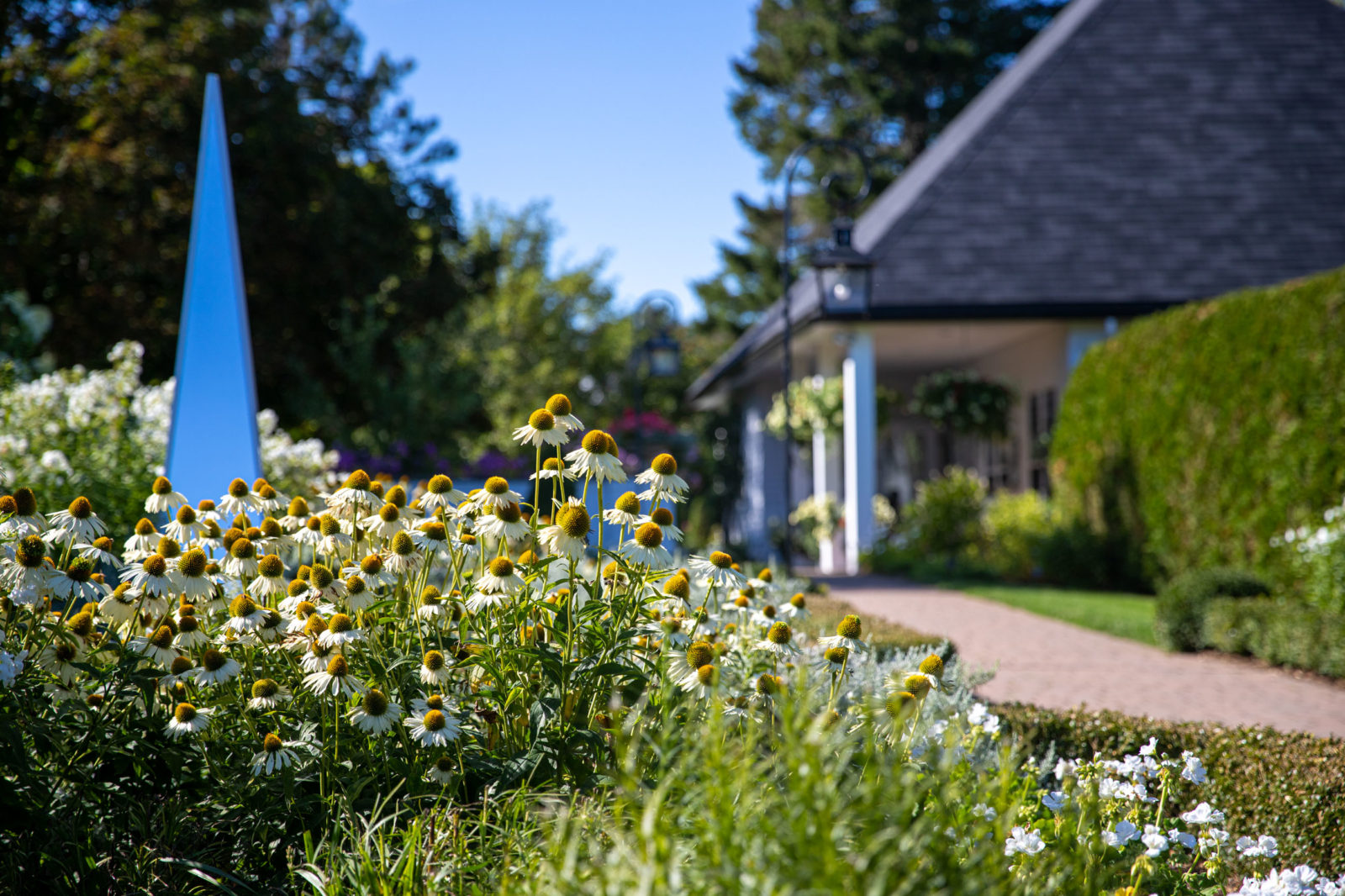 …leads to a welcome center which includes a nice gift shop.

This was our second visit to this award-winning garden, and it again provided a rich and relaxing experience, as well as the discovery of new plants and a visit to a special section for award-winning sculptures. The place is also well-known for its restaurant with a terrace overlooking the gardens. You cannot help but feel like you have been transported back in time, or transposed into a Renoir painting, when enjoying a relaxing luncheon with friends and family. Very civilized indeed!

The best way to get around the town is by foot or bicycle. There is a small network of bike and foot trails, but the streets are usually quiet enough that you can gently pedal or walk through town without danger. 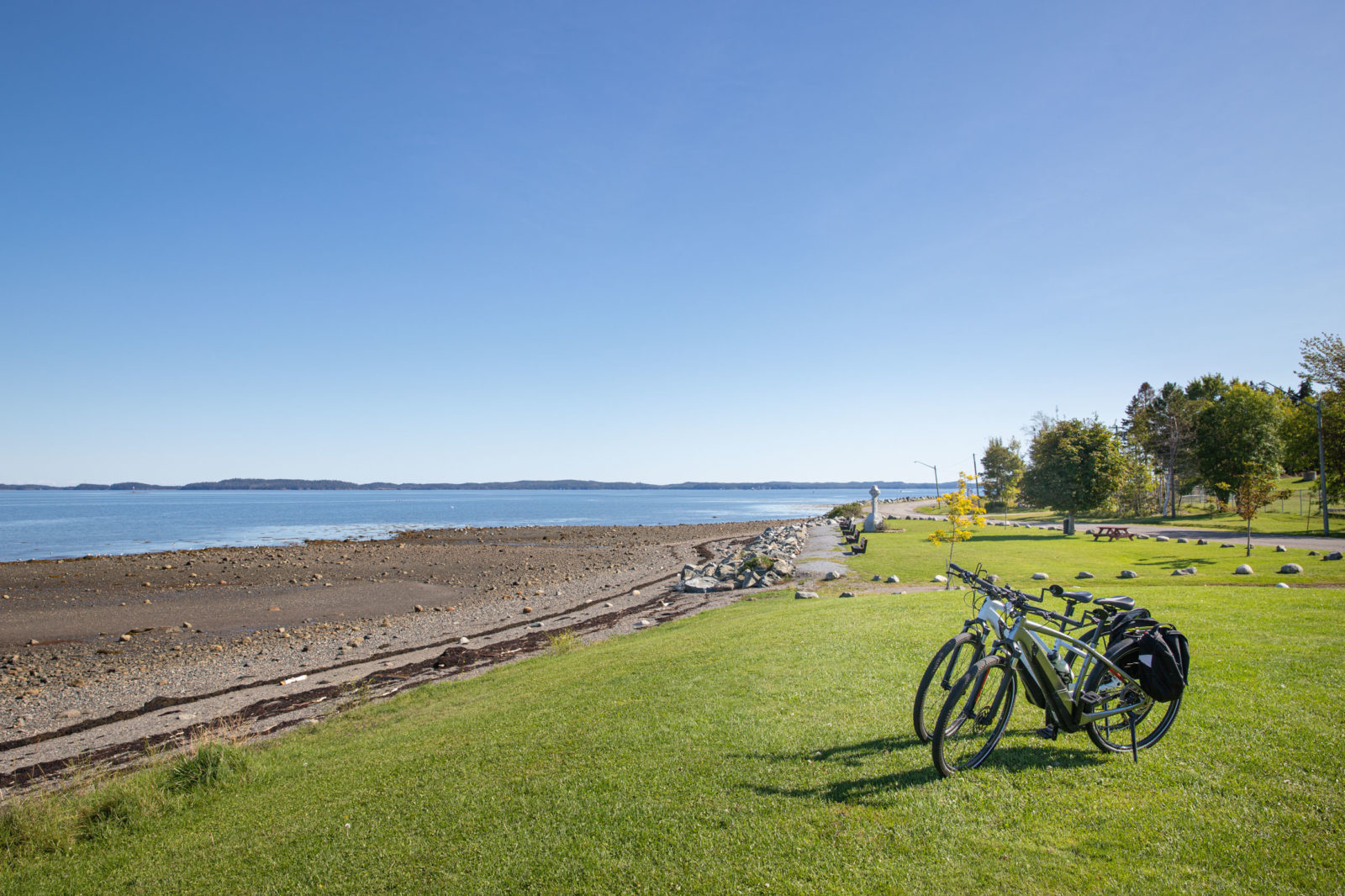 View of the Bay from Indian Point Park, a few steps from our campground. 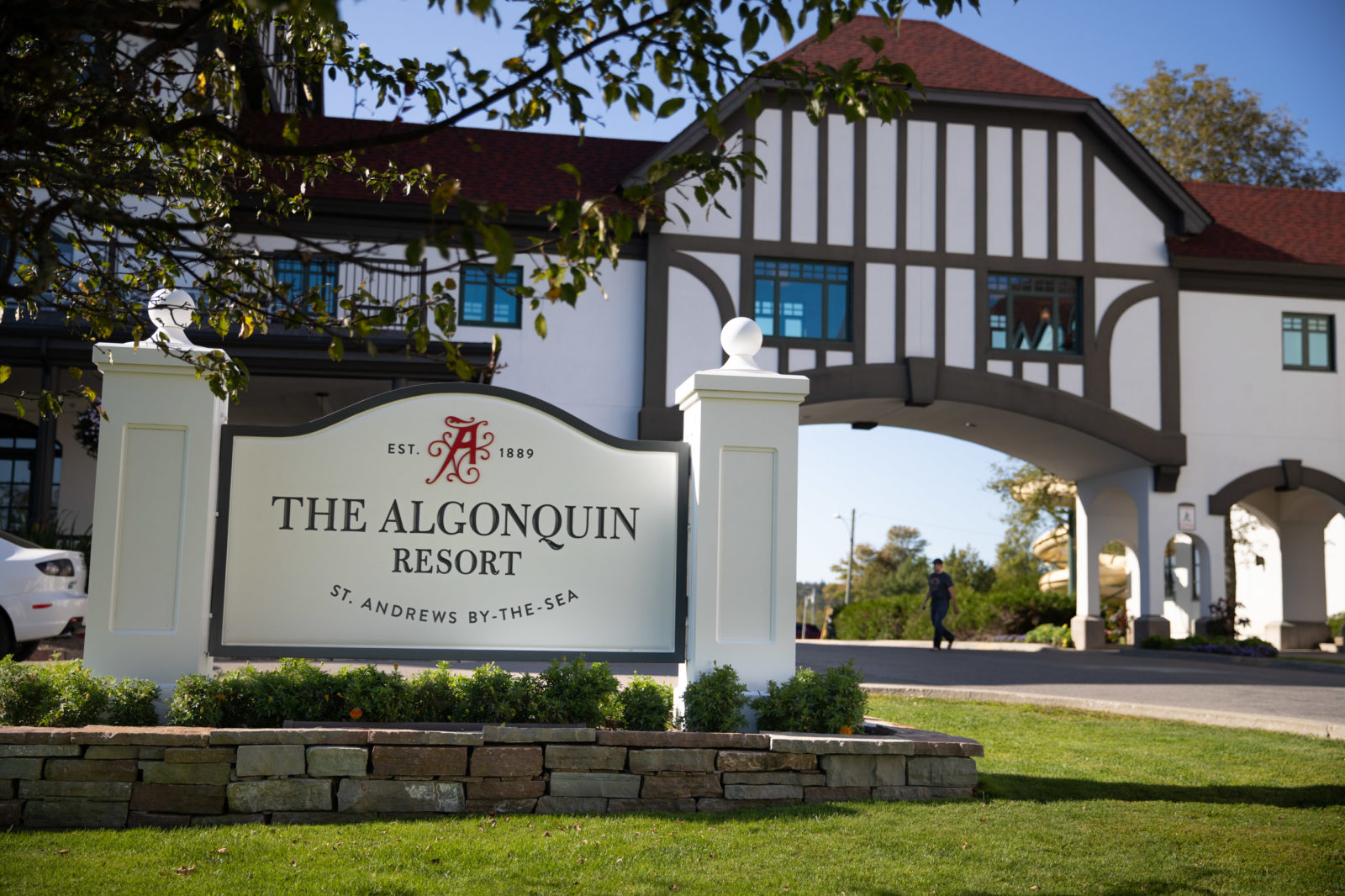 A luxurious and award-winning resort, established in 1889 and fully restored to today’s standards. 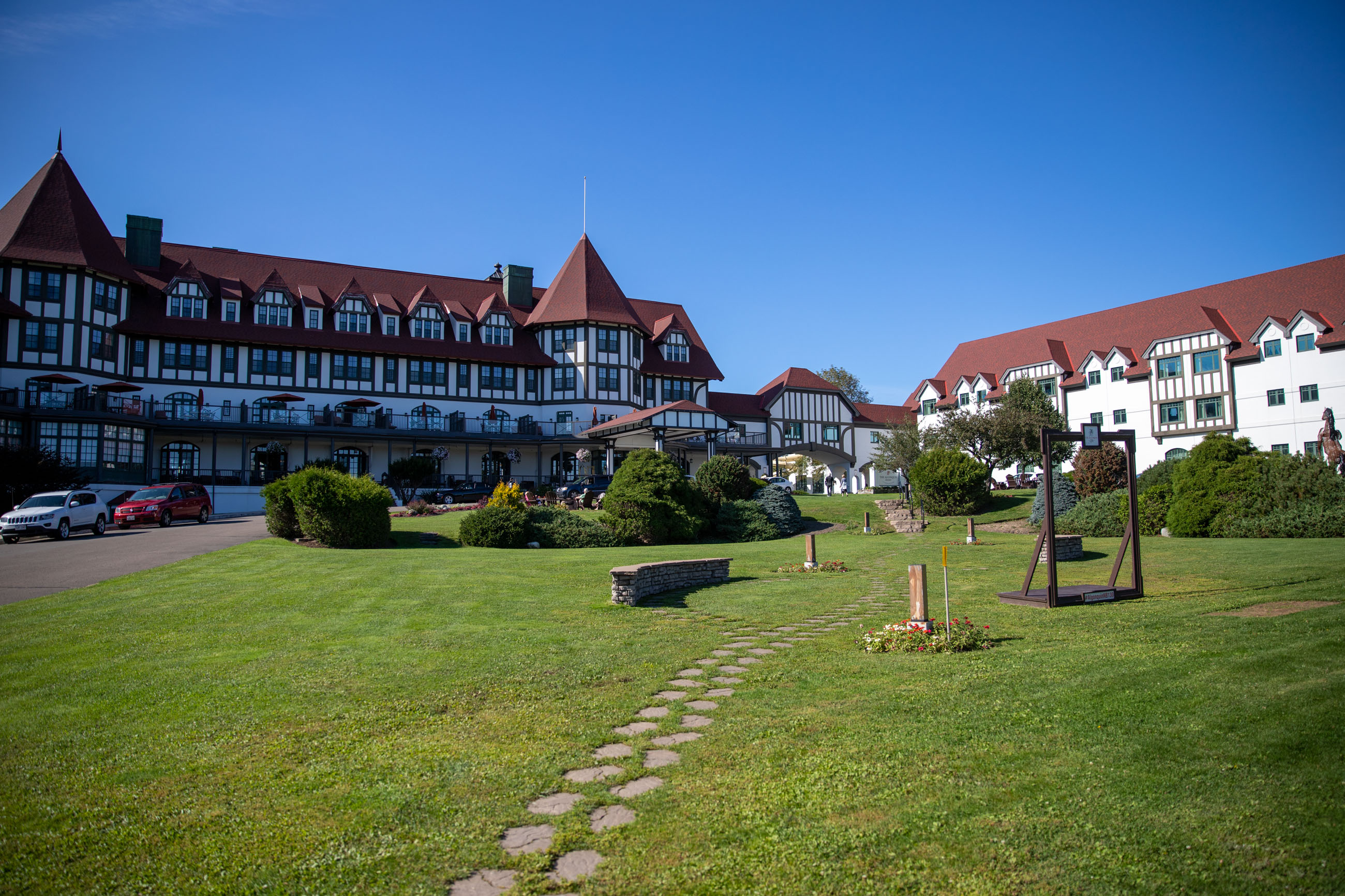 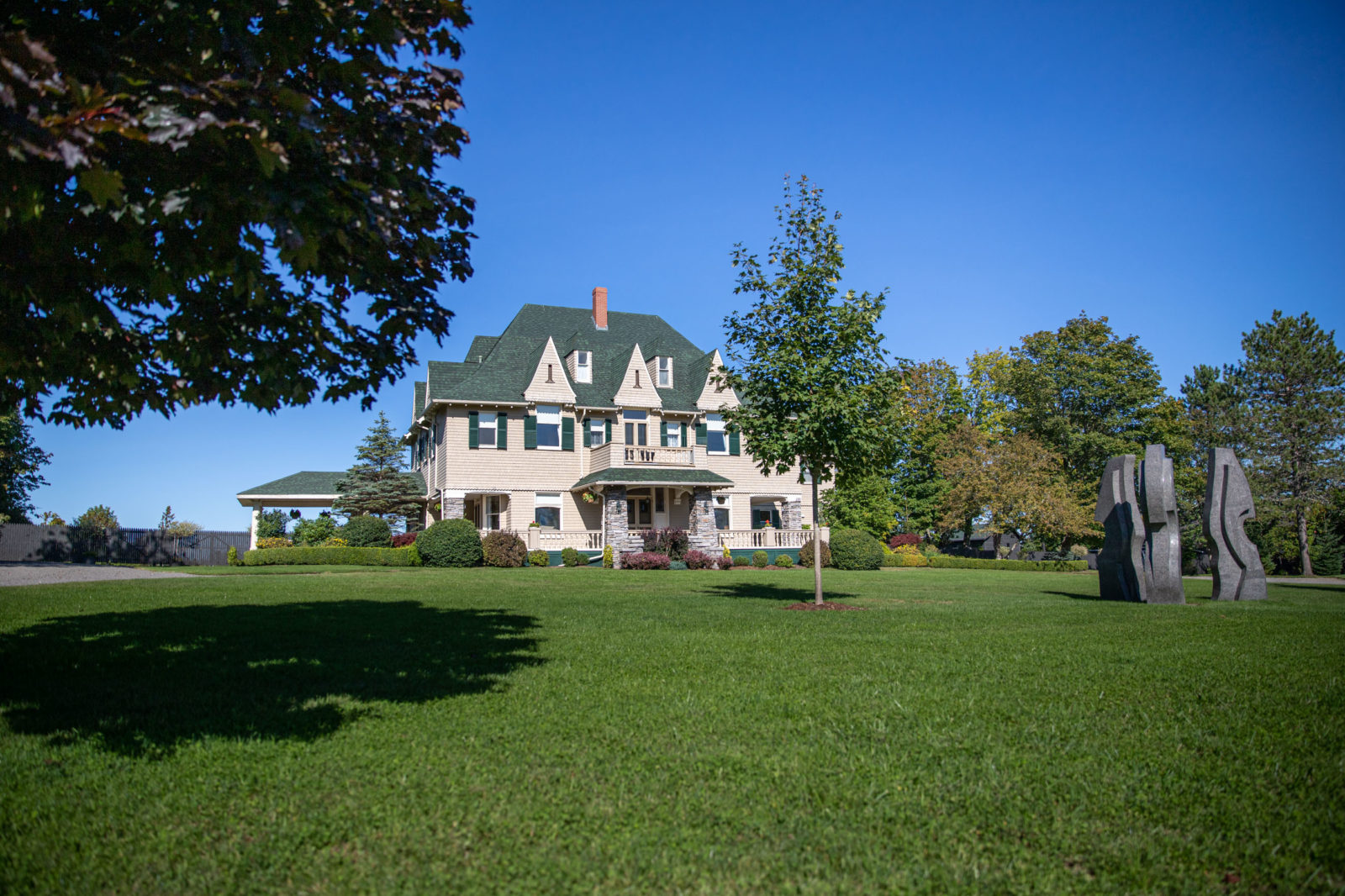 An example of the fine architecture that can be found in the area.

We discovered the St. Andrews Blockhouse National Historic Site, situated on the Niger Reef overlooking the Passamaquoddy Bay, by wandering around town on our e-bikes. This step-back-in-time site was built in 1812 by the townspeople to defend New Brunswick during the war between the US and Britain, just in case the fighting spilled over the bay. 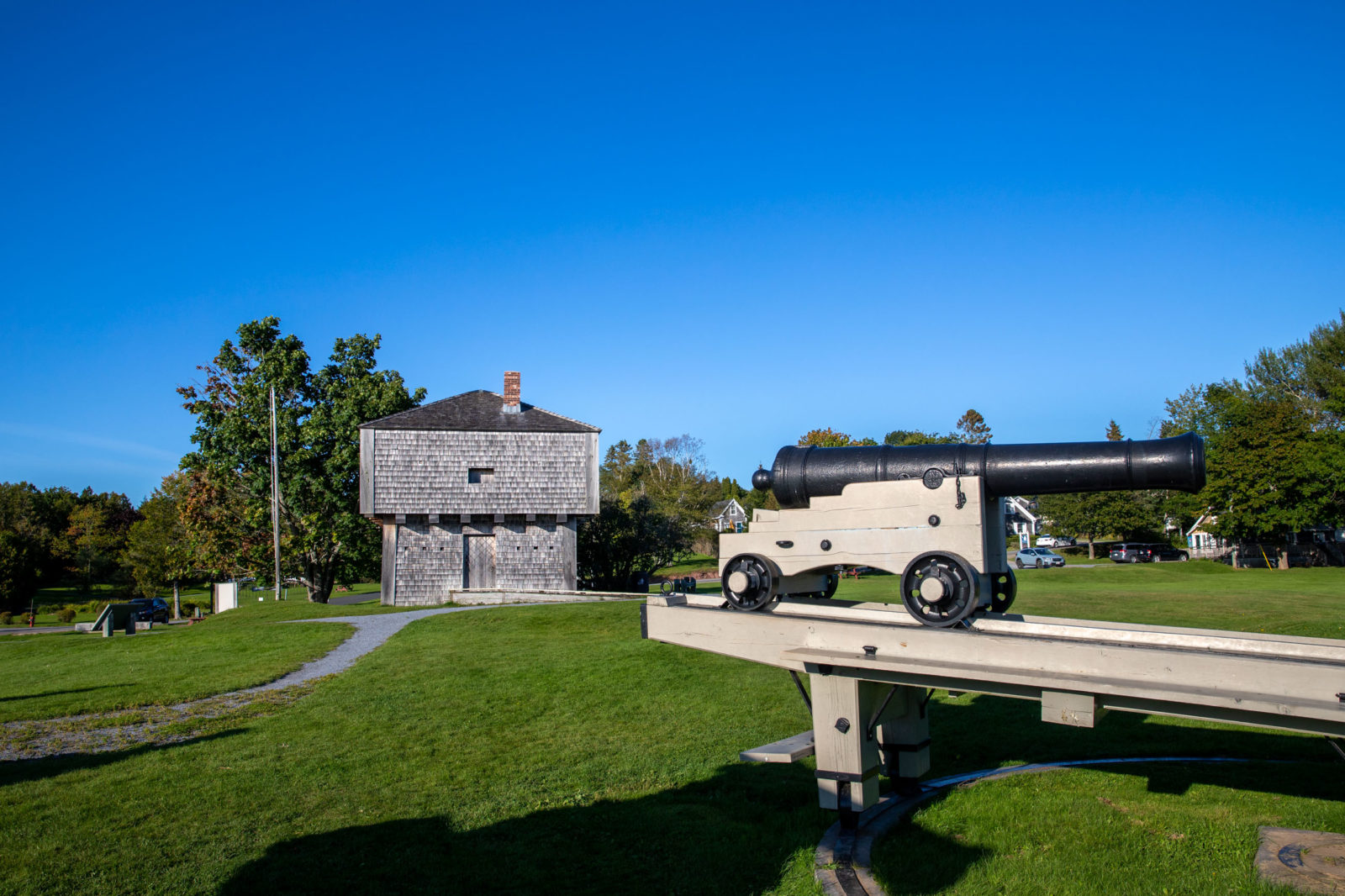 What’s a Saturday in a small town without a farmer’s market? Despite a cool and breezy morning, we parked our bikes by the market and enjoyed sampling local artist’s creations and engaging in friendly chats with them.

The scene at the farmer’s market, although no farmers were sighted during our visit. 😉

In the true spirit of serendipity, and as a perfect bookend to a memorable fortnight in the Maritimes, a tall ship approached the town’s main wharf, just a stone’s throw from the market. We walked our bikes on the wharf to witness the expert docking procedures, and as the ship was finally secured we learned that it was none other than the Nao Santa Maria, a replica of one of three ships that allowed Christopher Columbus to cross the Atlantic Ocean in 1492.

The “Nao Santa Maria” docked on the city’s main wharf. 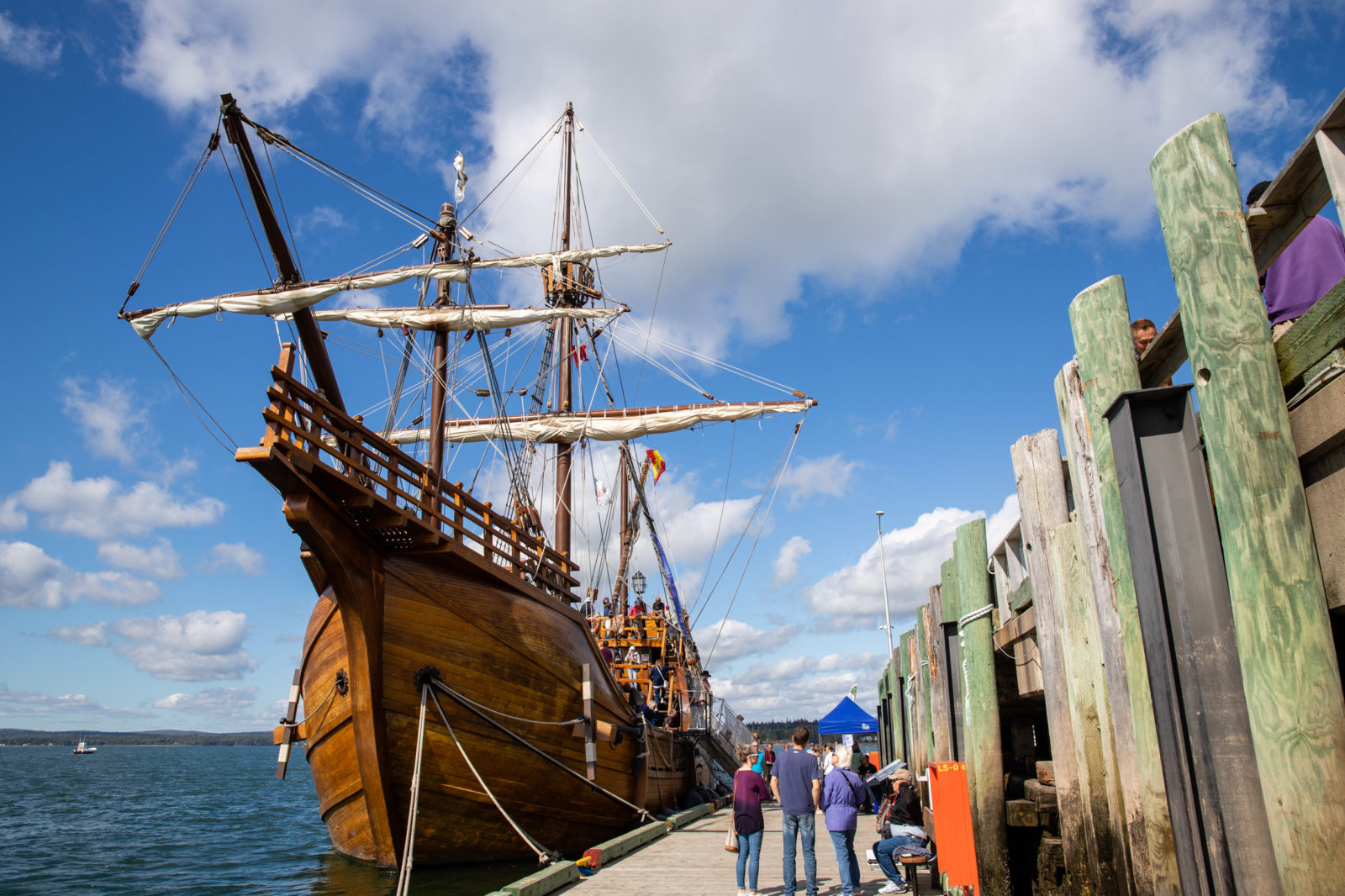 We promptly booked ourselves for the self-guided tour, where we found historical panels throughout the five decks as well as artifacts representing life on board in the 15th century. Poor sanitary conditions and sickness were a constant battle, and merely surviving the ocean crossing became quite a feat. Compared to this, our self-sufficient, vacuum-bonded rolling palaces that can be plugged in at any campground when, God forbid, we don’t want to lose a moment of air conditioning, fresh water, and electrical power put the Santa Maria‘s sailors’ incredible accomplishment in perspective.

Sadly, it was our turn to weigh anchor and move homeward. St. Andrews-by-the-Sea remains one of those small towns that you wish you could call home. There is just something about it that is welcoming, safe, clean, and nice. The townsfolk seem happy even at the tail end of tourist season, and that state of mind can only make you feel serene and long to return.