The Five W’s of WOW! 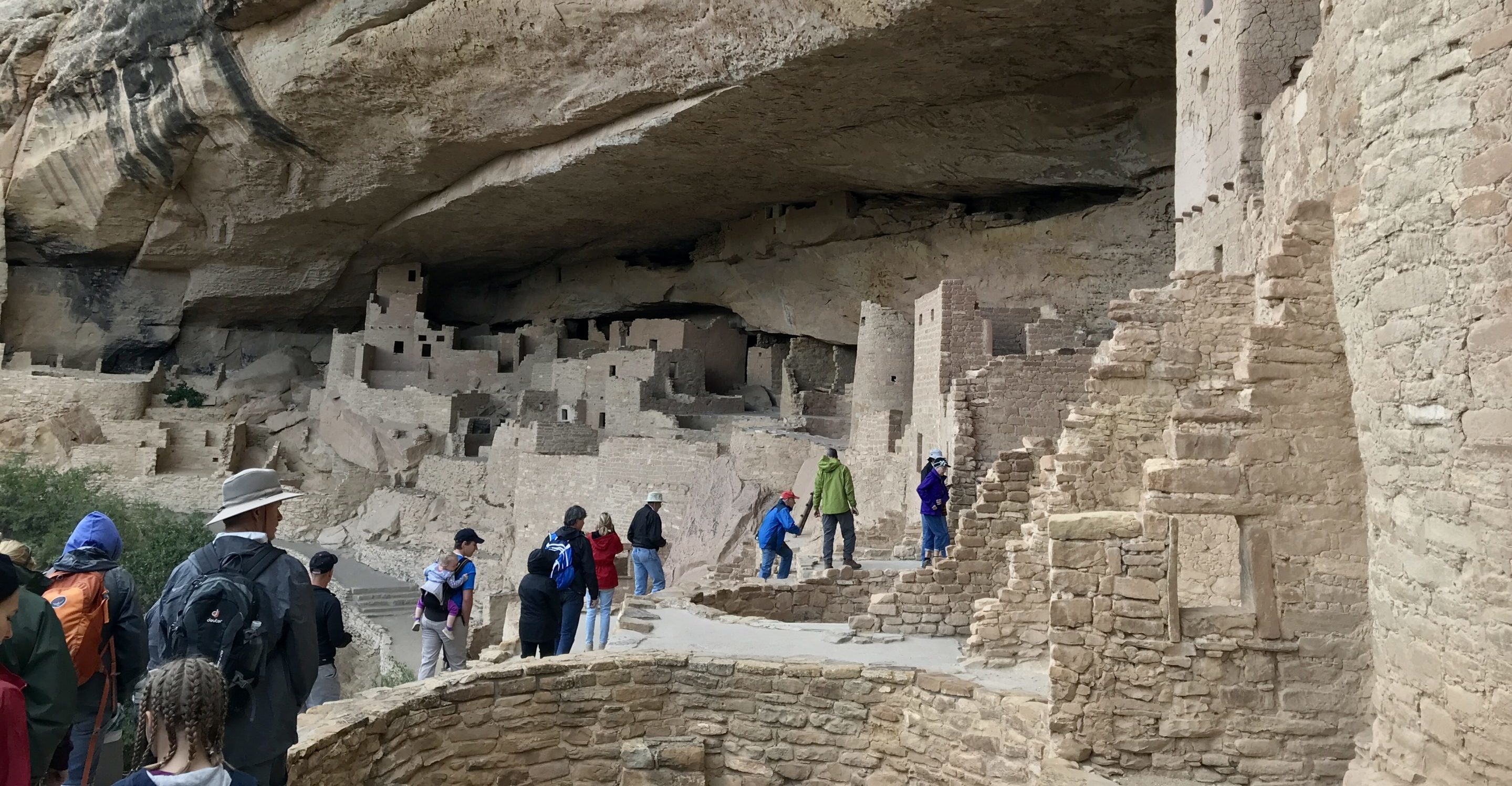 Editor’s Note: Alexandra and David are members of LTV’s sponsored content team, The Leisure Explorers. Do you own a Leisure Travel Van and enjoy writing? Learn more about joining the team.

Back in my college years, during a journalism class, it was discussed that the basis of any well written and informative piece is to follow the guidelines of the 5 W’s. If you’ve got the “Who, What, Where, When and Why” of any topic, you’ll probably end up writing a good tale. The professor then paused for a moment, and added that having a WOW factor doesn’t hurt either.

Which is, weirdly enough, the thought that came to me as I was climbing what looked like a very rickety — yet surprisingly sturdy — wooden ladder that was propped up the steep side of the cliff. I’d been following the feet of the stranger in front of me, and Dave below me was following from behind. 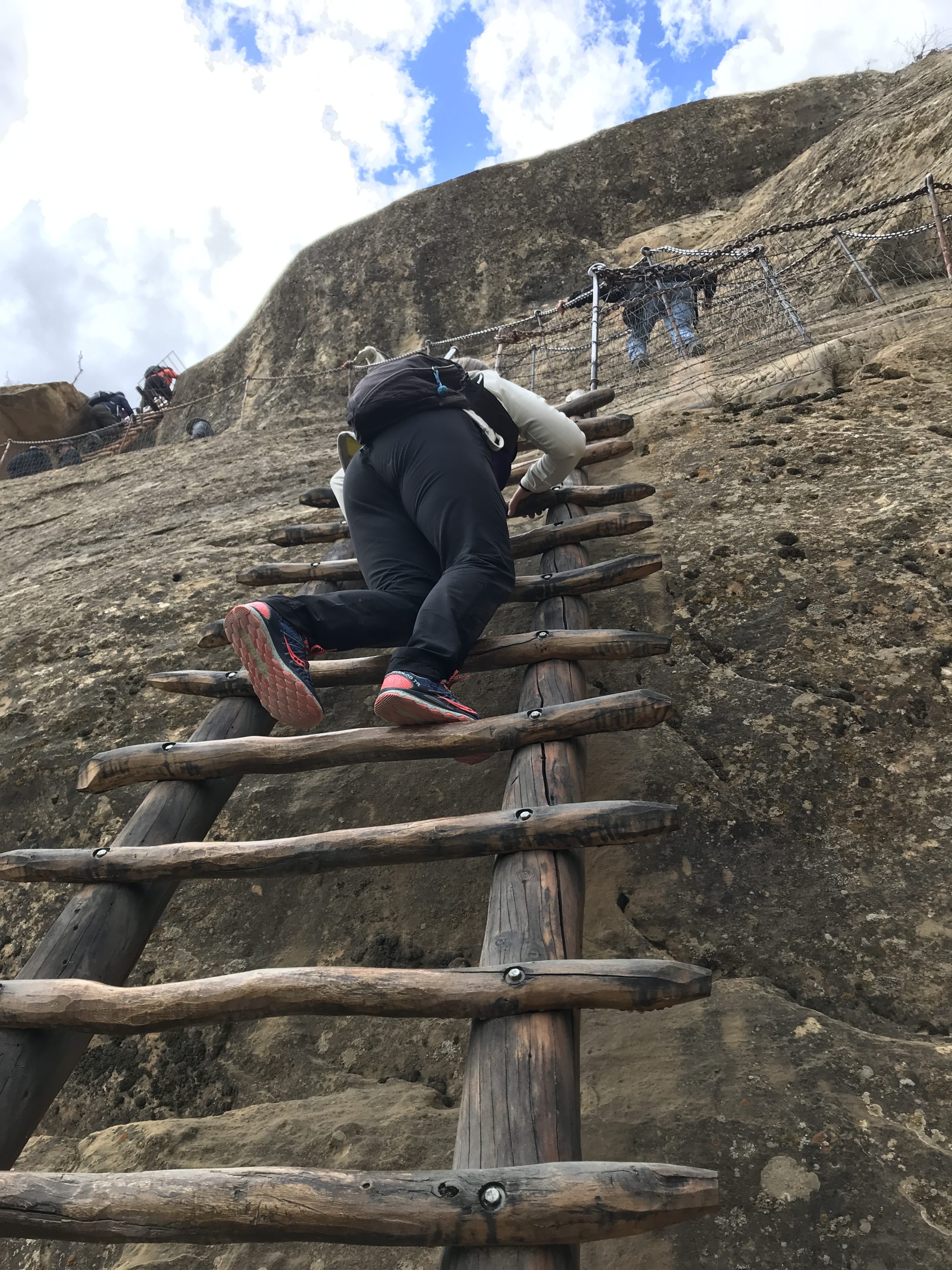 “I’ll catch you, just in case you fall” was his reasoning. I dared not look down, and I didn’t even want to think about falling.

I took a slow, deep breath and unclenched my grip from the rung, reached up towards the next one while simultaneously convincing myself to do the same with my left foot. I kept making my way up; breathing, unclenching, grasping, and moving.

I was so high up I couldn’t see the ground below me, yet not high enough to see the top of the mountainside either.  I was halfway up a ladder and halfway down a mountain. There was no other choice but to keep going and this certainly wasn’t the time for theatrics!

I was definitely in the throes of a total WOW moment.

After what felt like an eternity, but was probably really mere minutes, I saw the outstretched hand of the Park Ranger reaching down towards me. Reaching up for it, allowing his firm grasp to propel me upward, forward and onto terra firma.

Terra firma that really was but a narrow ledge on one of the multitude of mountainsides that surrounded me. 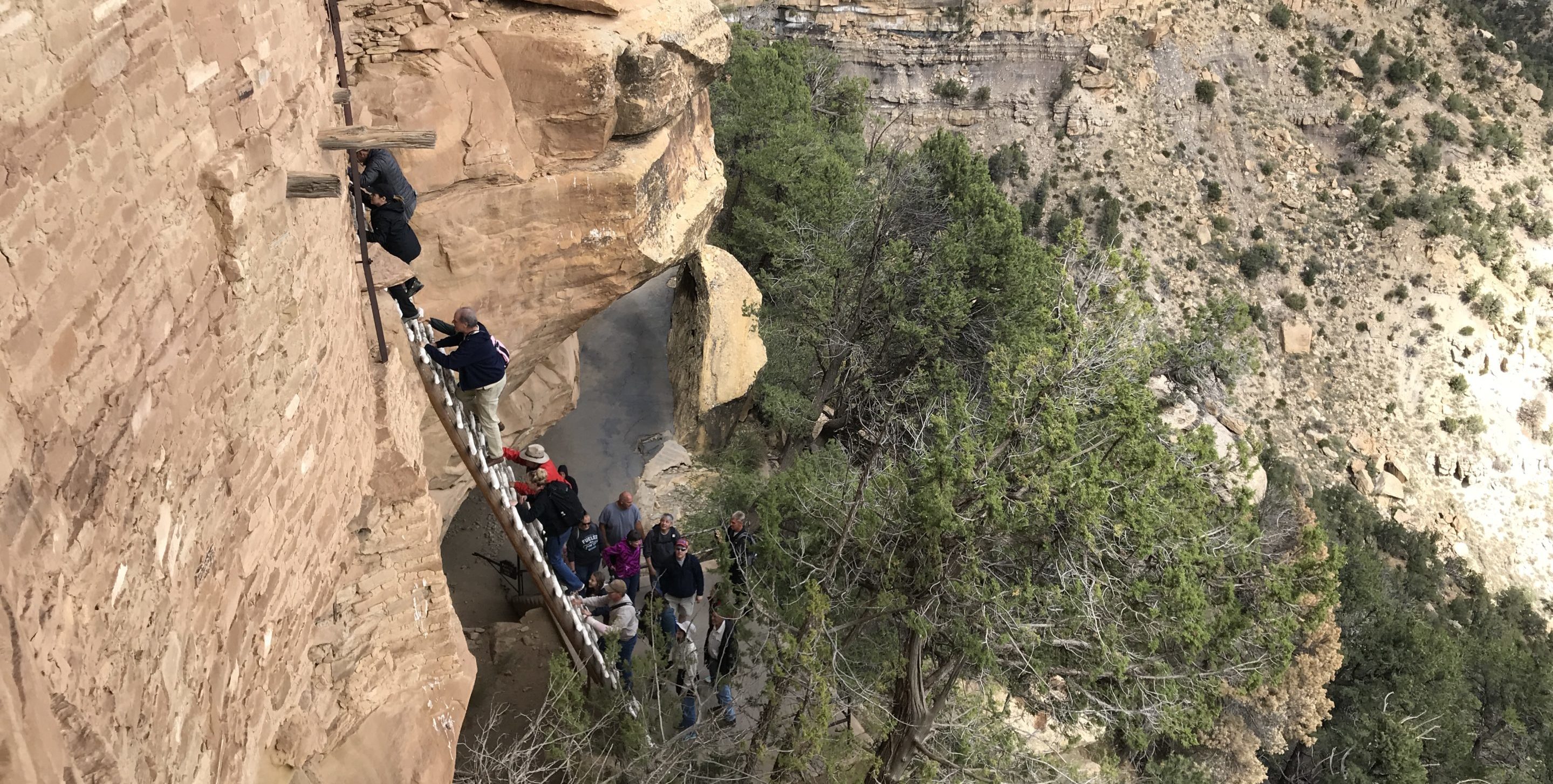 “Thank you!” I said to the Park Ranger, and to Dave I whispered, “I don’t need to do that. Ever. Again!” He laughed and I noticed that there were lines of relief on his face as well. He, like me, didn’t much like heights.

The Park Ranger instructed the group of us to inch closer together allowing for room for the rest of the group to disembark said ladder. While we were waiting, he told us a bit about himself, his life as a Park Ranger. His passion was evident as he answered some questions, telling us about the valley, the wildlife that lived here, and some quick facts and tidbits of information of what we were seeing and experiencing.

With a quick look around he noted that everyone had ascended safe and sound. He then proceeded to describe the route ahead. A wee walk up some steps, he said. Another ladder, he confirmed. And then we would have to squeeze through a very tight and small opening.

I steeled myself with another deep breath, the excitement of what lay ahead muting my apprehension, propelling me onwards. Or maybe it was just the knowledge that I would be holding up the queued line of people behind me if I didn’t move. 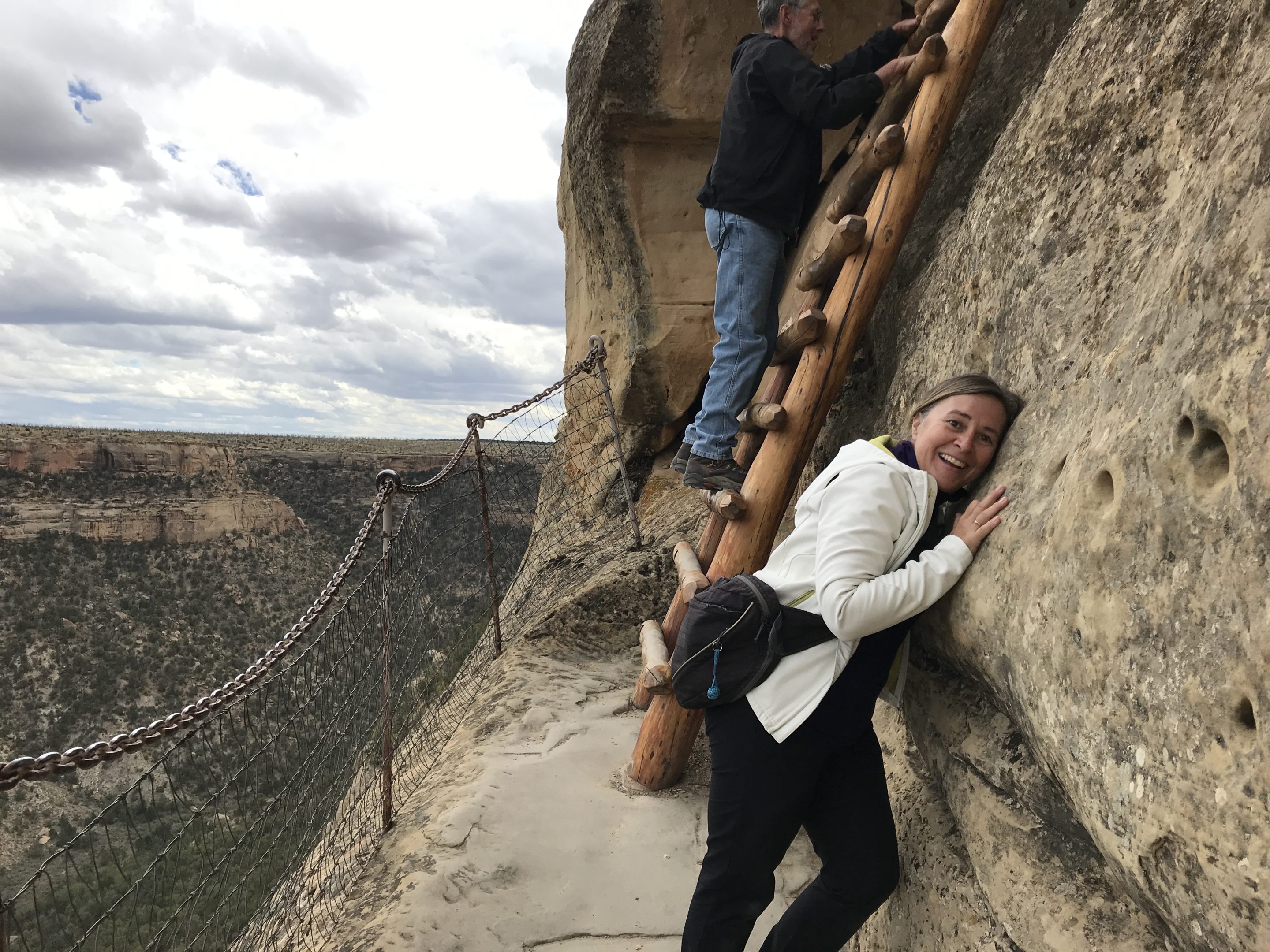 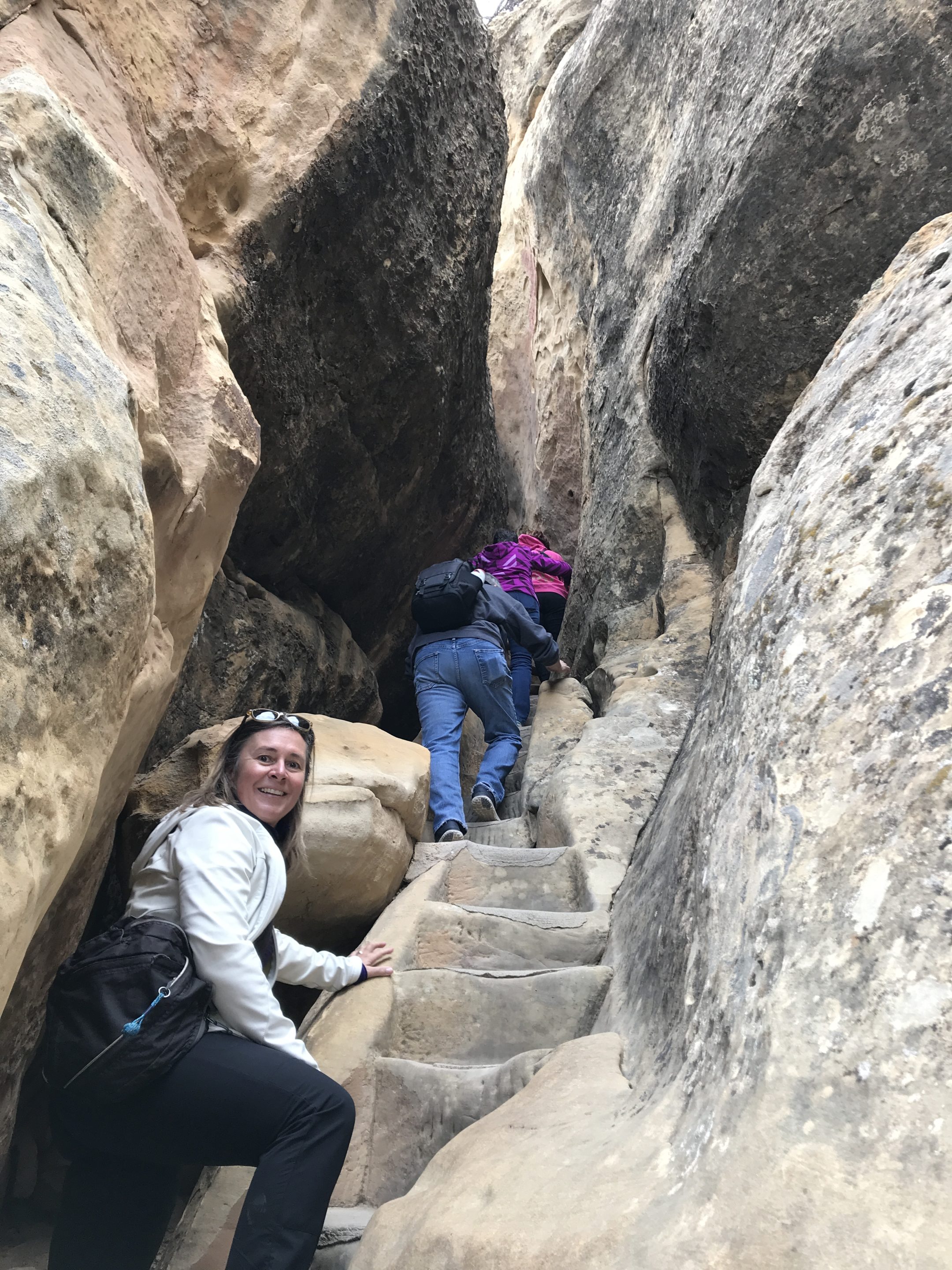 The stone steps we needed to climb were shined into slippery slopes due to the passage of eons of rubber soled runners. 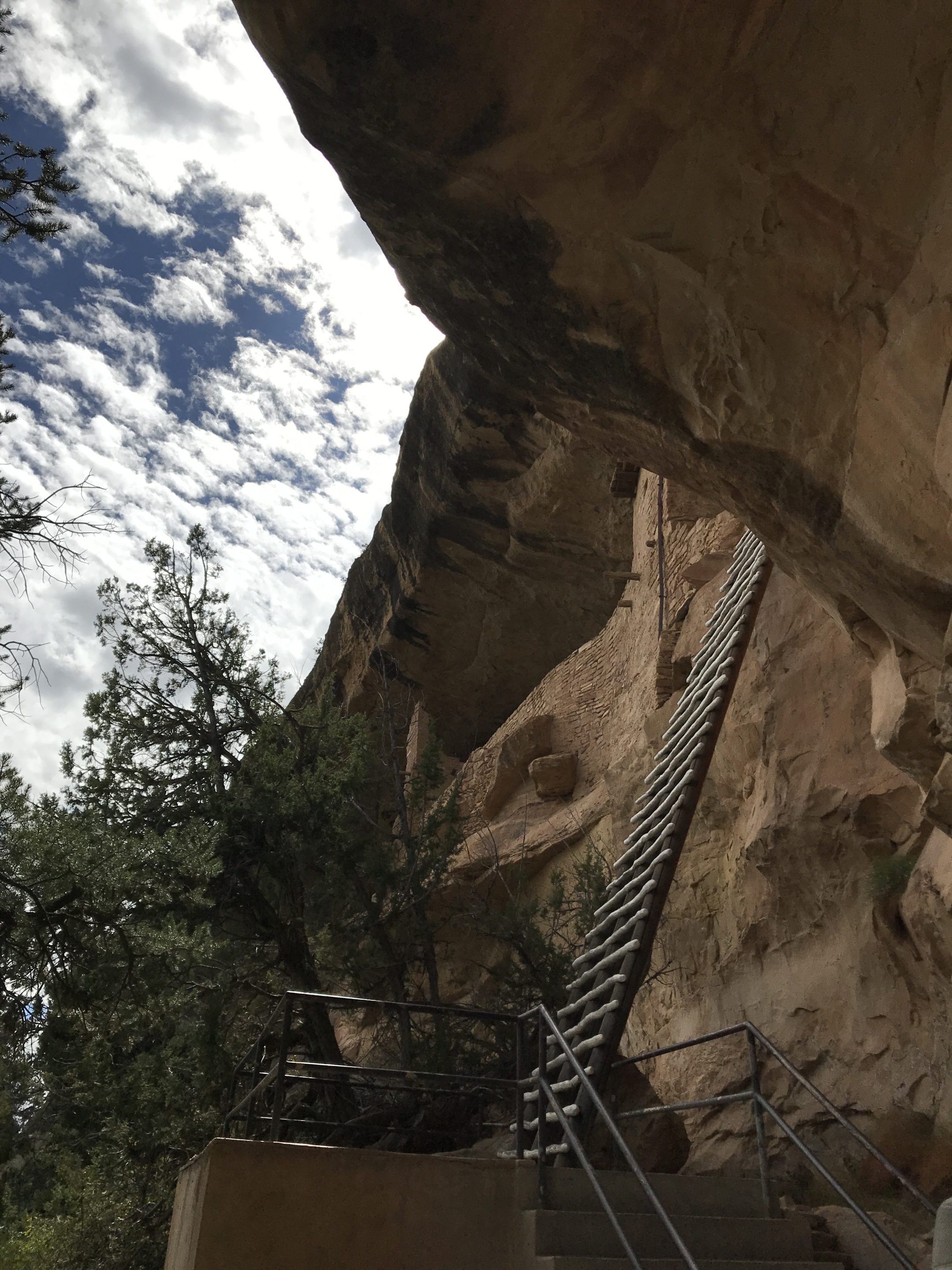 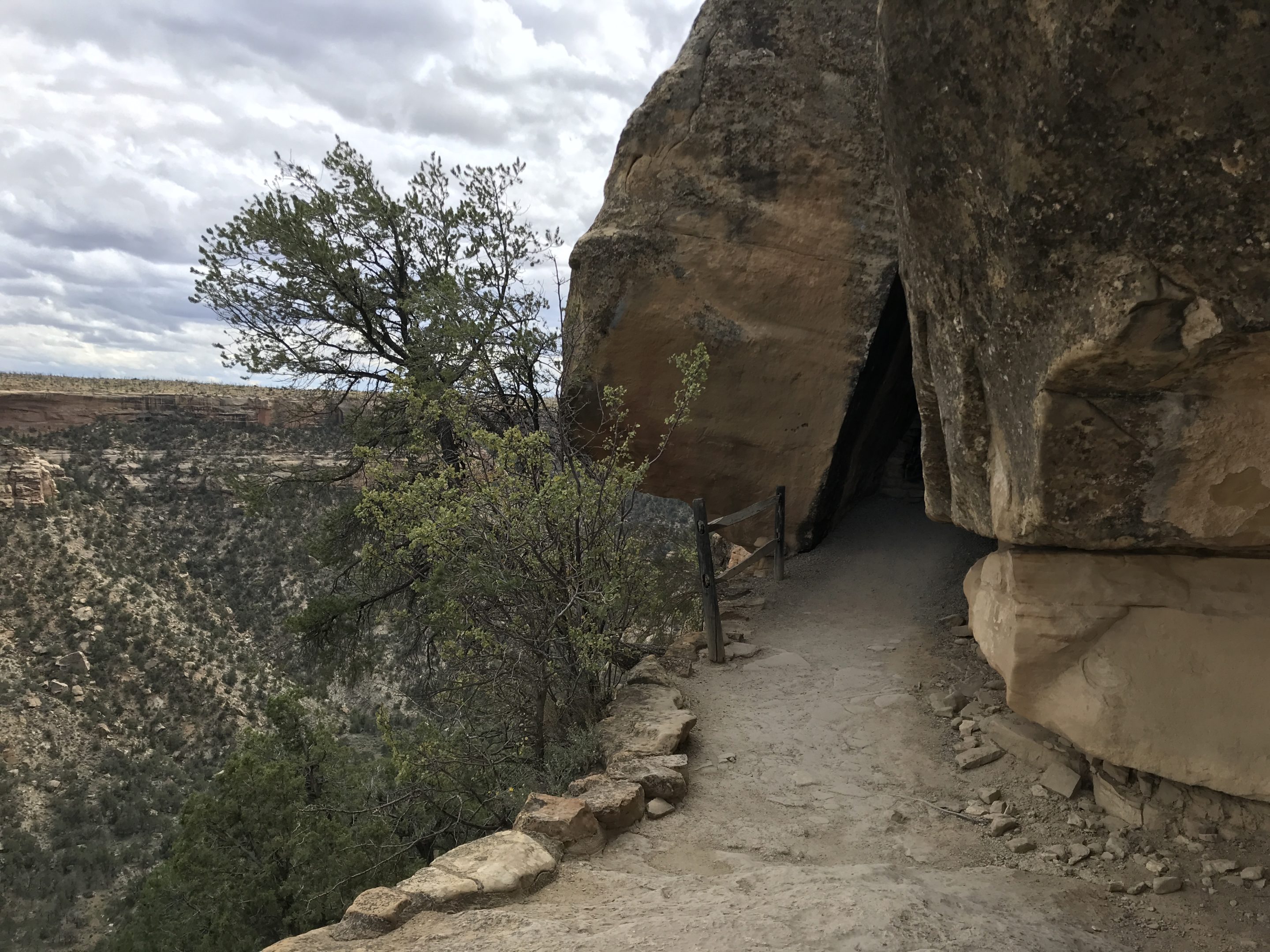 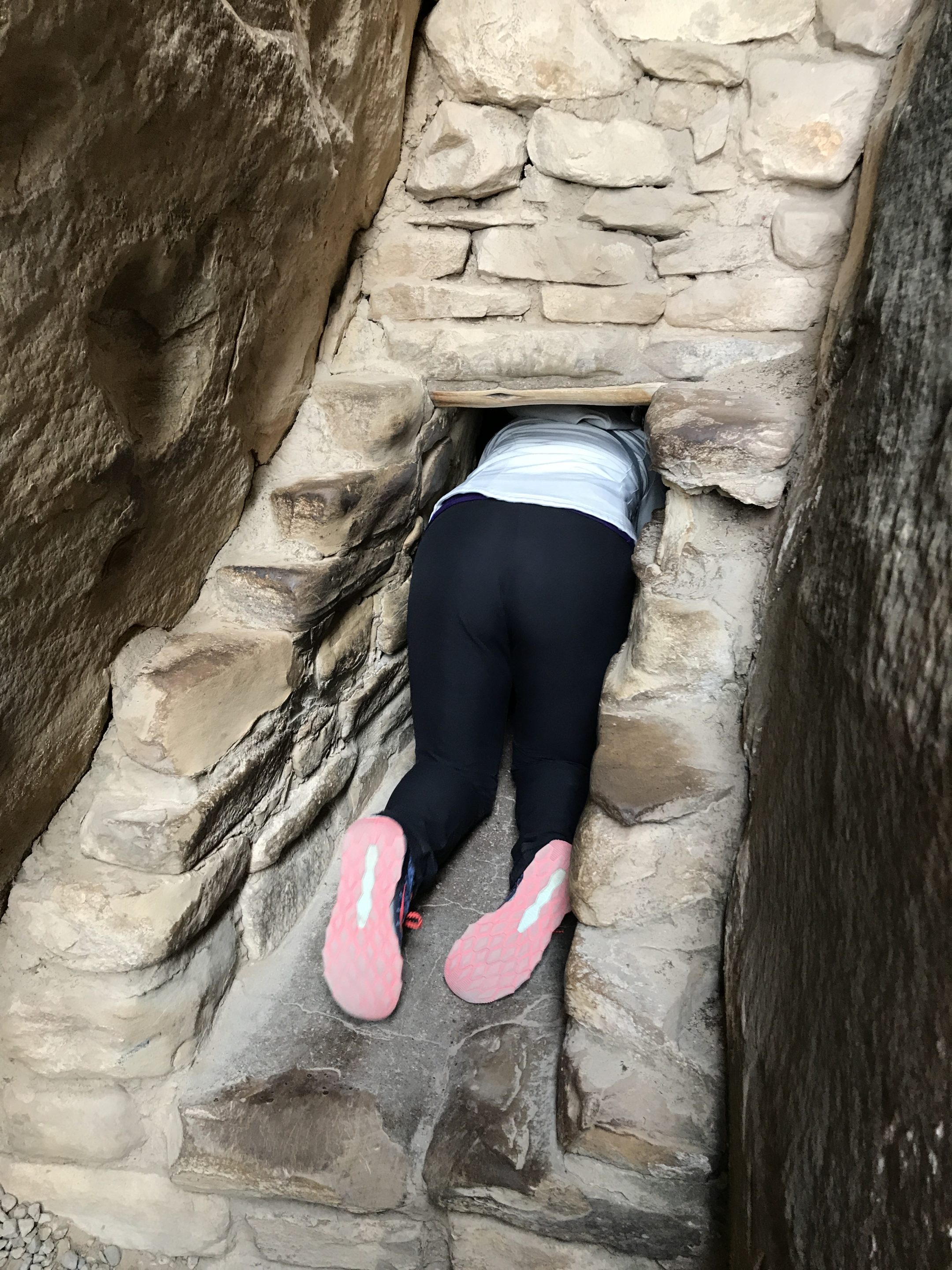 And then I reached the entrance to the tunnel. I dropped down to my knees and entered (cue the butt shot!). 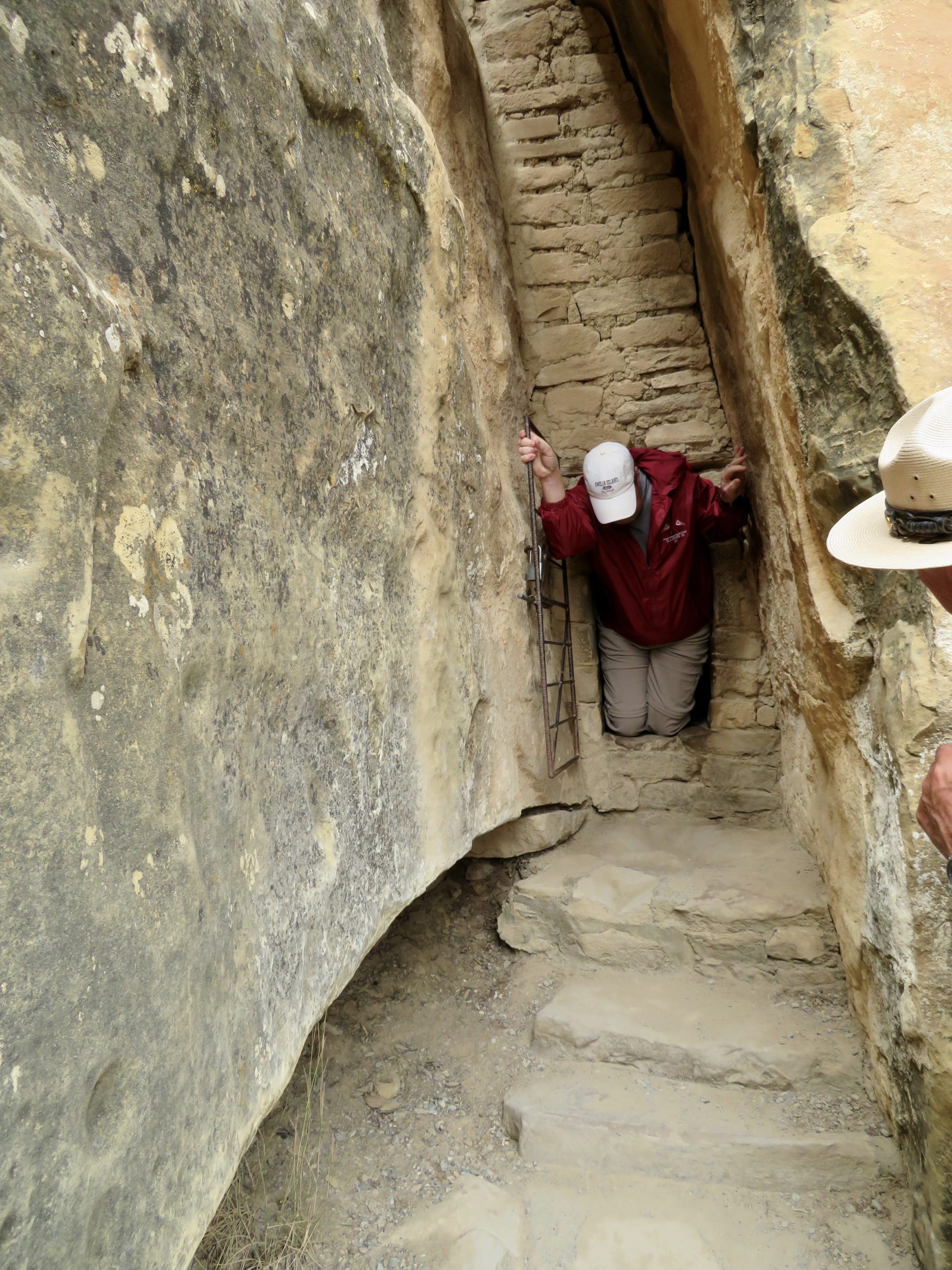 I tried not to imagine bugs on the ground and spiders on the walls and things that nightmares are made of.

As I tried to inhale peace and exhale the fear of dark spaces, I wondered WHY? Why was I doing this? Then I saw the proverbial light at the end of the tunnel.

One by one we emerged, and once again, in single file, we all followed the person ahead of us.

When we emerged, the gasps of WOW’s echoed all around!

We’d reached a large area that wasn’t quite a cave, but rather a strata ledge that seemed to have a large opening etched deep into the mountainside. All around were what looked like multi-level condo style adobe homes.

Adobe is defined as earthen materials (like compacted soil and clay), built on a solid foundation (can’t get any more solid that the rock of a mountain, right?). It described these homesteads perfectly.

And as I walked around, and explored and marvelled, I once again wondered why? 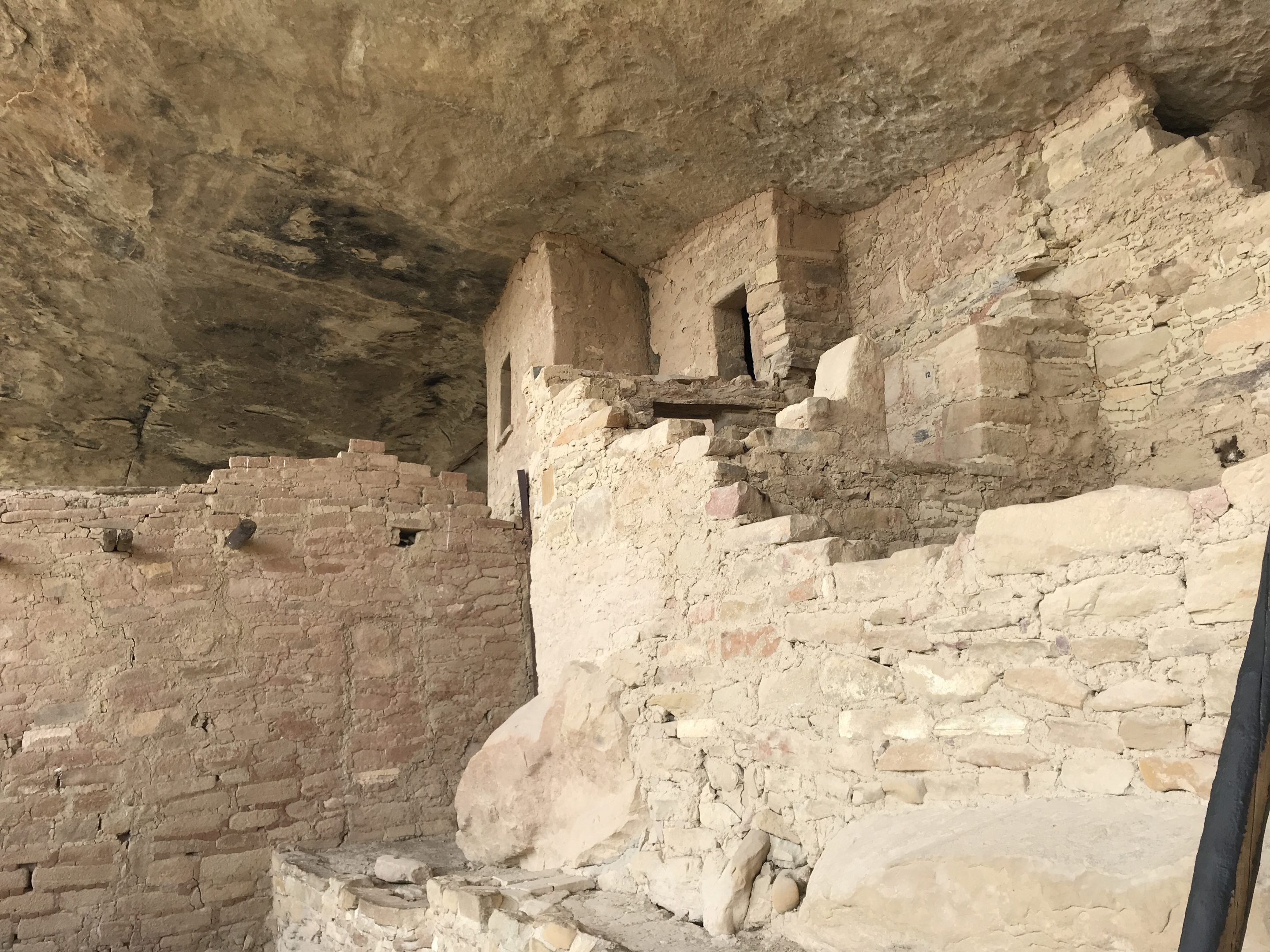 Why would anyone build their homes at these impossible locations and great elevations? Were they hiding from something? Or someone? How did they lug their luggage into their homes. Which made me smile, because I knew they really didn’t have luggage, per se, but they would’ve had stuff. Like, how did they bring the logs of wood back? How did they bring food home?

And at the thought of food, my tummy grumbled and I knew that these people wouldn’t have had access things like the granola bar I had packed in our knapsack. Instead, I imagined they would have been gatherers, farmers and possibly and quite probably hunters. What did they do when they were coming back from a hunt? Maybe one where they would’ve been lucky enough to catch a wild pig, or some such beast. How would they have brought that down (or up) and through this tunnel? Just who were these people?

The Park Ranger spoke, telling us how, many moons ago the Ancient Puebloans called this area, this village, these homes? Home. They were known as the cliff dwellers of Mesa Verde. 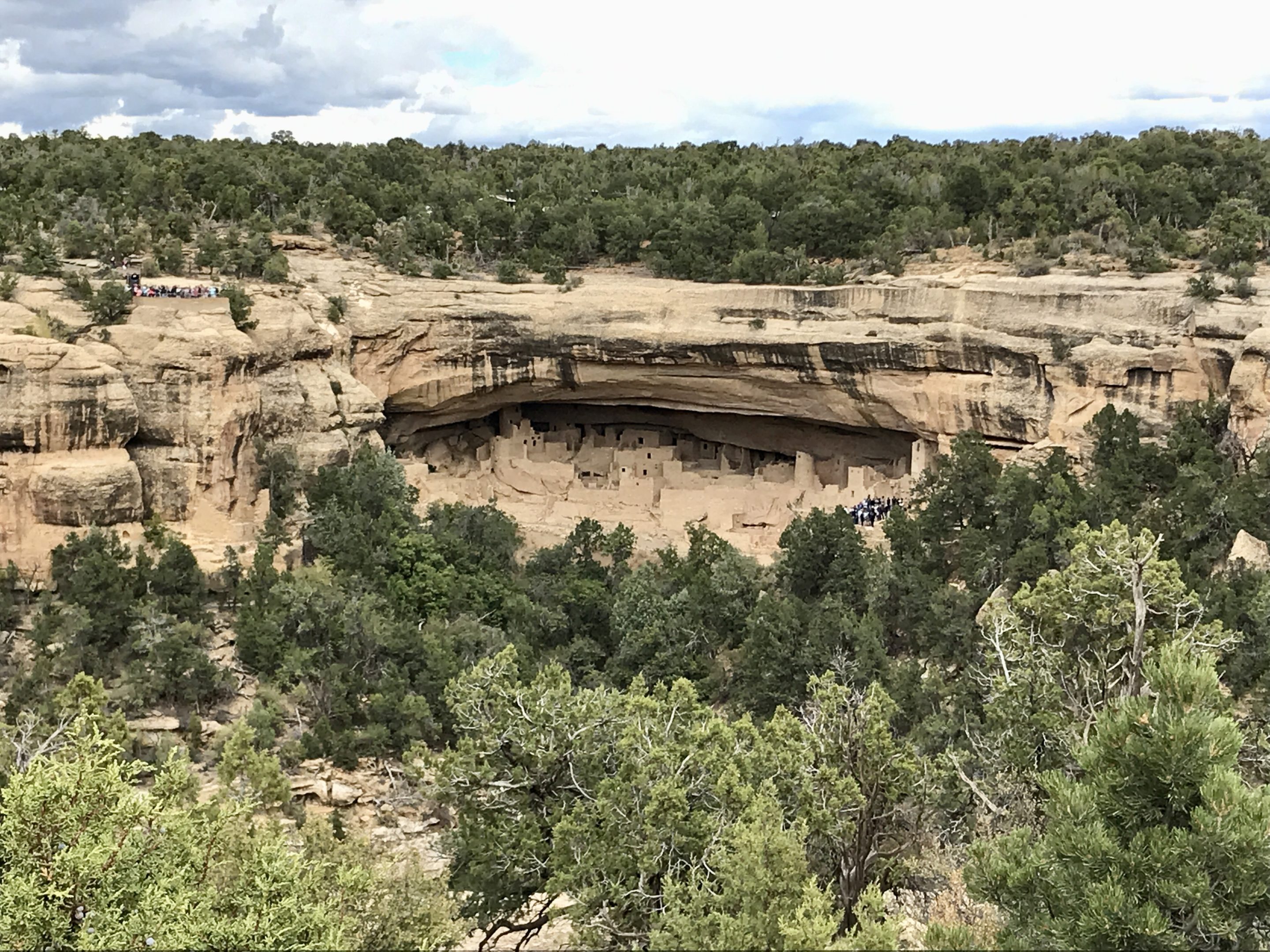 Upon hearing the words ‘Mesa Verde’ one might perhaps conjure images of something verde, which to those who have some French or Spanish, might suggest something green. If I looked outwards, I definitely saw green. 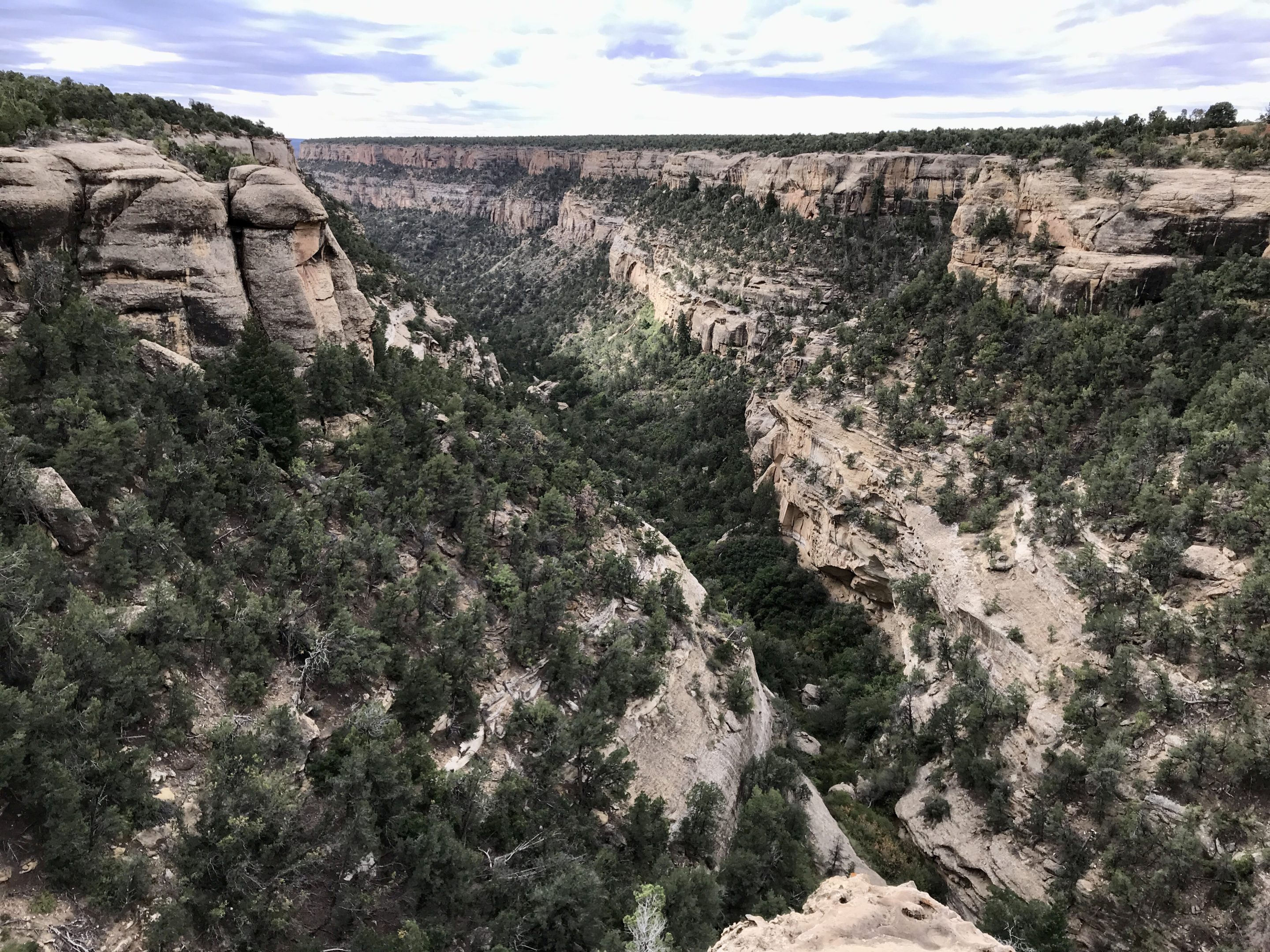 The Park Ranger continued to explain that ‘mesa” translates to ‘table top’. When the Spanish Explorers arrived in the American Southwest, they were surrounded by steep hills with very flat tops of green – and appropriately called these areas Mesa Verde.

The Mesa Verdeans were farmers and the fields they farmed were on the mesas and sometimes in the canyons below. Their homes were located in between the two, usually facing south, and accessed via small, hand or toe holds that they carved in the steep sandstone walls.

I was grateful that in order to access them today? The National Park Service had provided us with ladders. 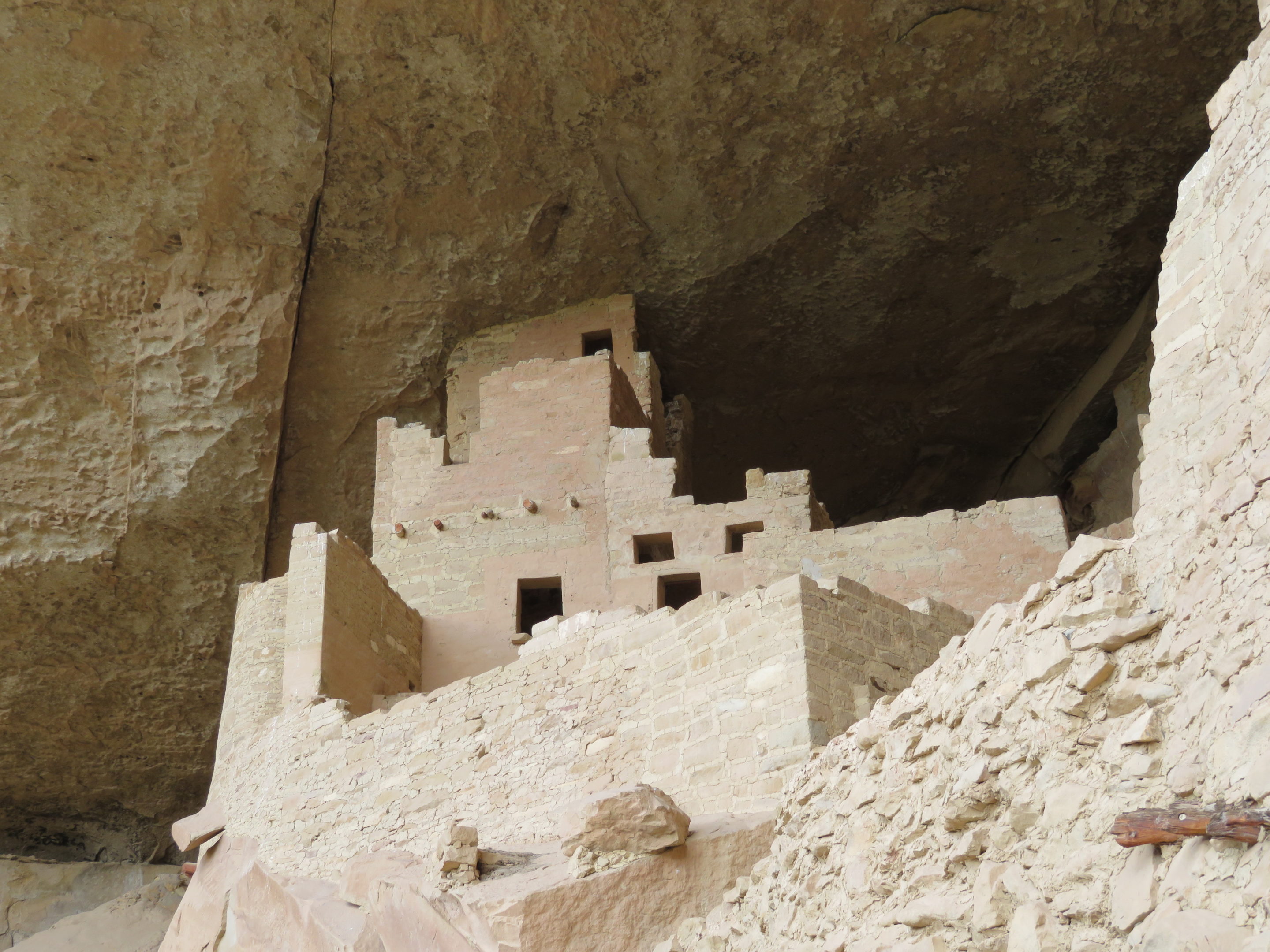 These homes were of varying degrees of evolution. Some were pit style but came complete with a hearth, fire hole and others were larger, with additional rooms for a growing family. 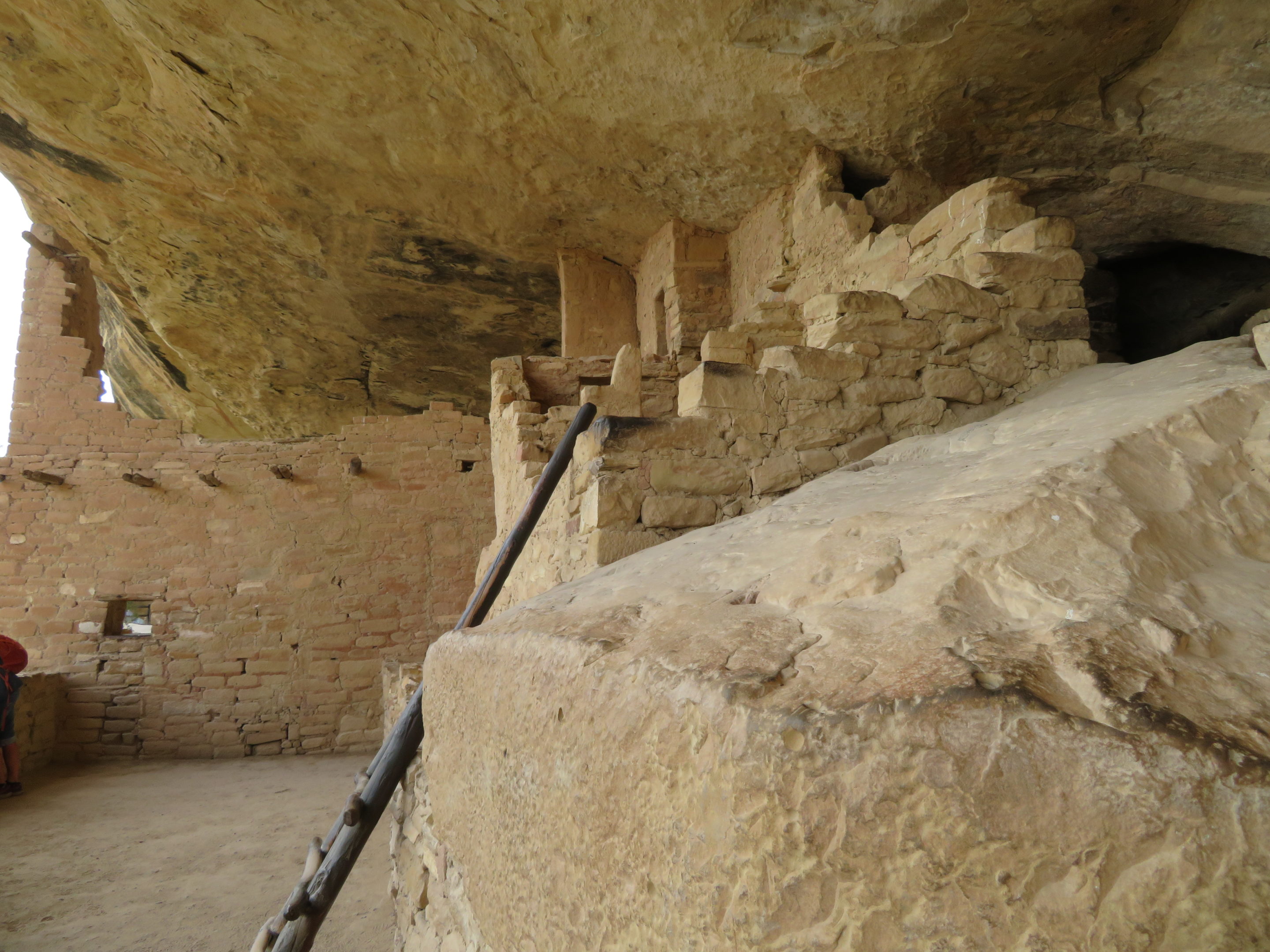 Some were grouped around kivas, which were larger round structures that they used to gather around in for social or ceremonial purposes. 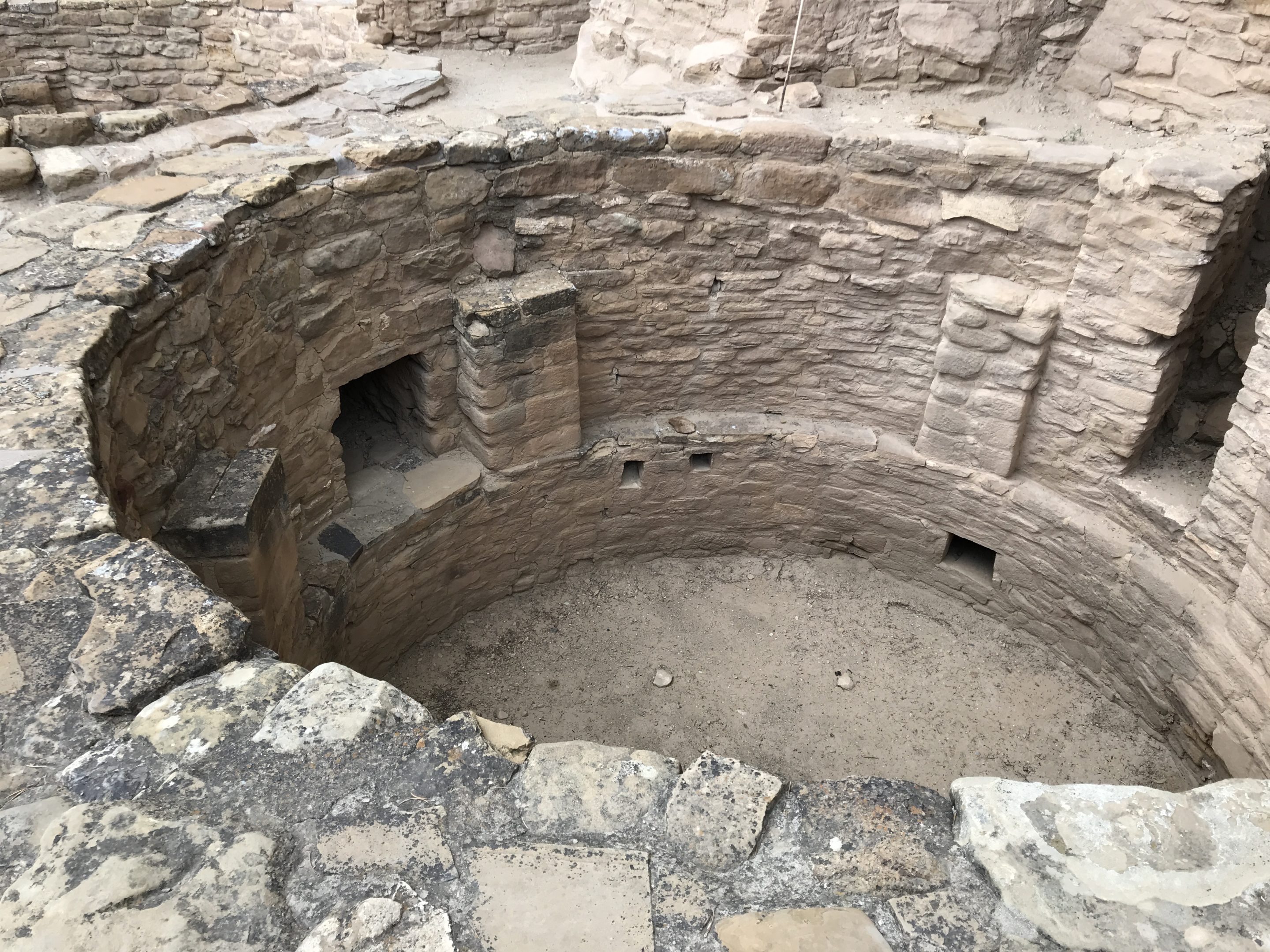 In real estate, location is everything! And being nestled deep into the cliff sides the community was protected on all sides (except one) against not only intruders, but against the weather elements as well. They remained cool in the summer, and because they were mostly underground, warm in the winter. They collected rain water or in the winter, melted snow. 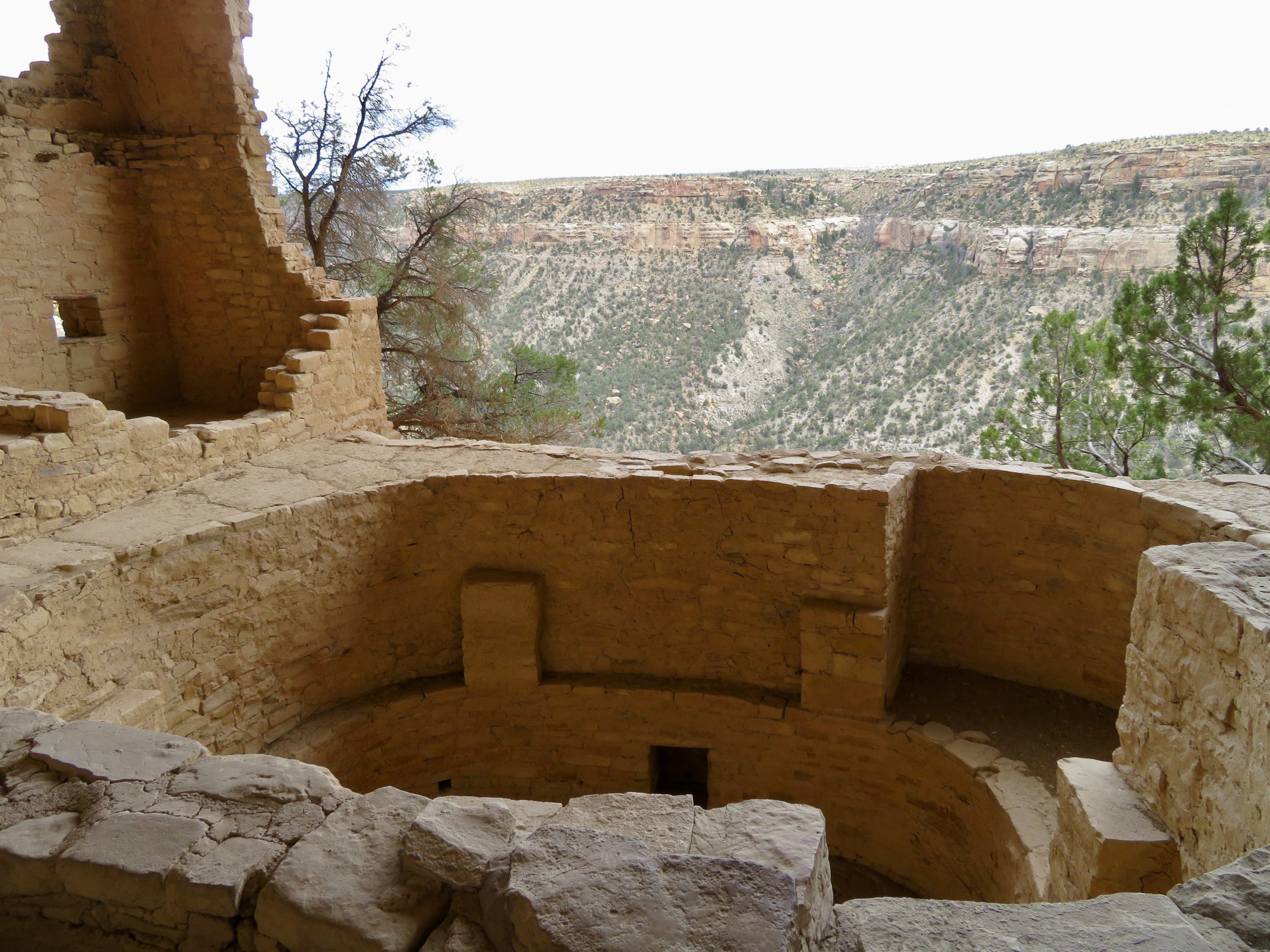 The National Park Service estimates that there are over 4,000 of these sites in the Mesa Verde National Park, with only about 600 of them discovered to date. Imagine?

We got back to our home later that day, nestled among the trees in Morefield Campground, 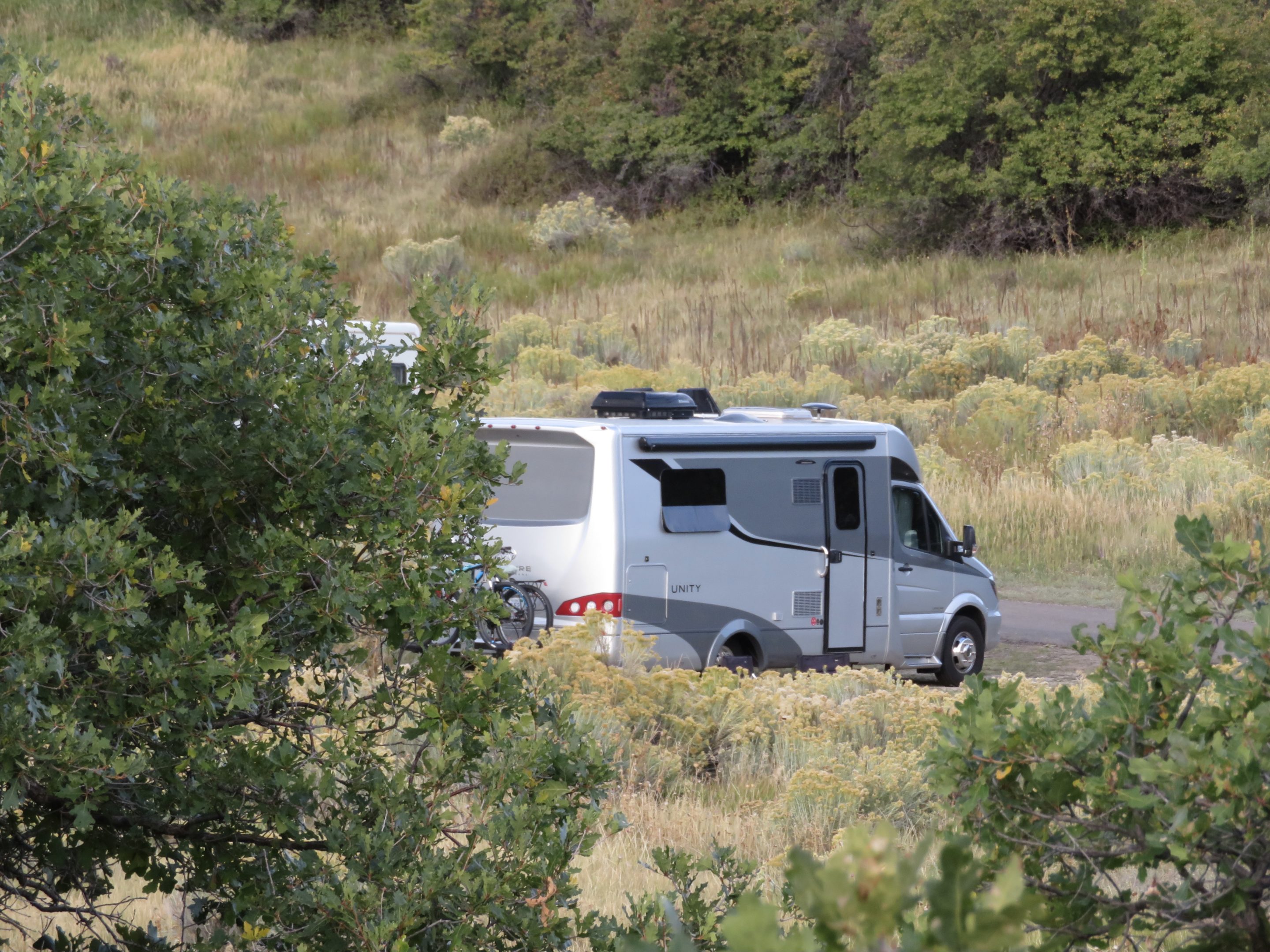 We like to call ourselves explorers as we comfortably drive around in our Leisure Travel Van (Unity IB), complete with galley and queen size bed, with no ladders needed to get to our home, thank you very much. We’d just finished feasting on BBQ’d roast chicken that we didn’t have to hunt for, or lug up a mountainside and through a tunnel to get. We were drinking water that didn’t need to be caught during the rains or melted from the snow.

As we were gazing at the Mesa Verde around us, it still seemed quite a leap to imagine how halfway up (or down, depending your perspective) were strata ledges that house villages of these condo-style adobe homes of a people who lived there many, many moons ago. 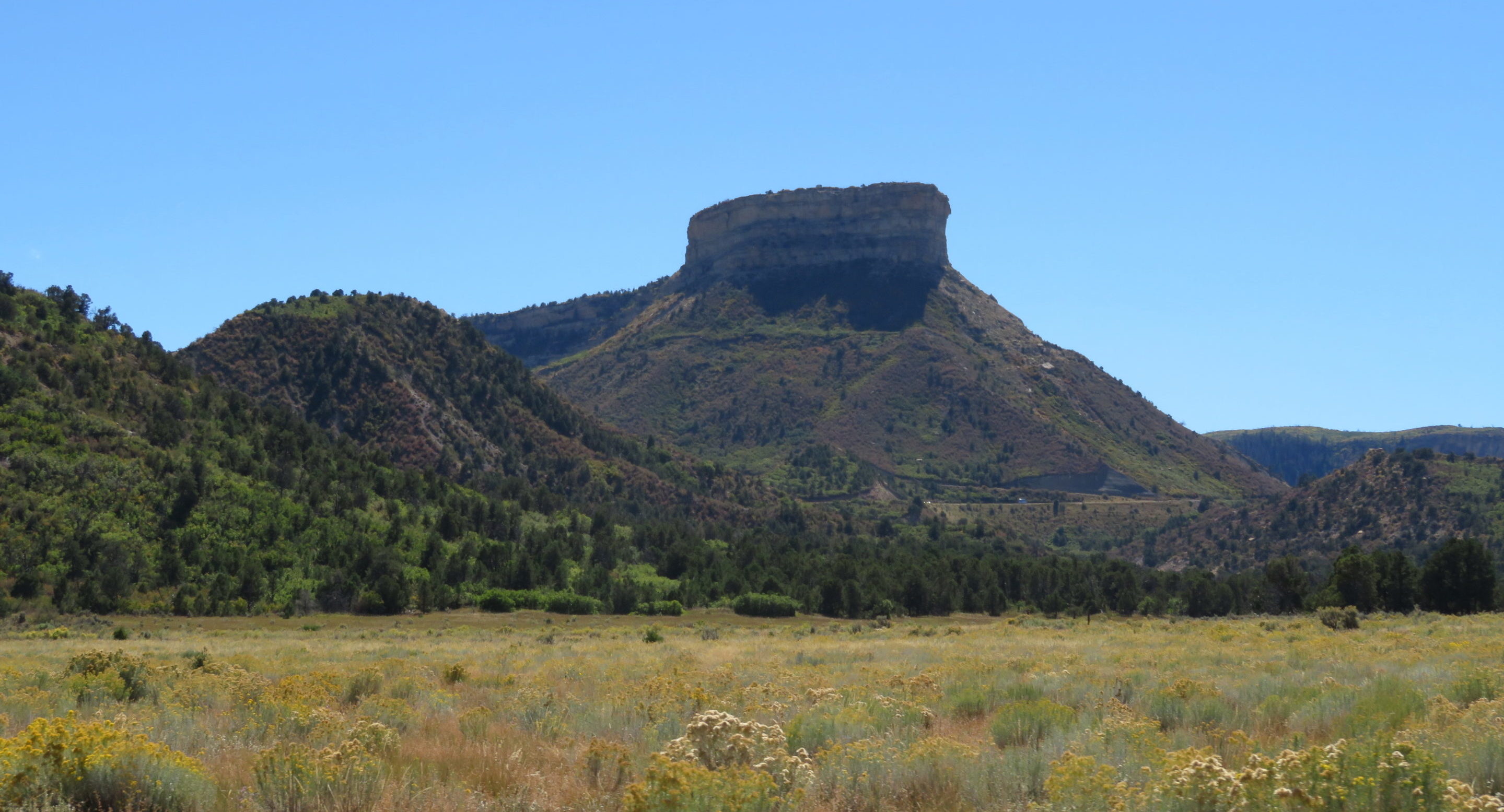 And still we were left wondering why – why did these people choose such an extreme location to build their homes?

Sometimes not all questions come with answers, but this tale of our adventure did come with a WOW factor, we had the aching muscles to prove it. My professor might’ve been proud.