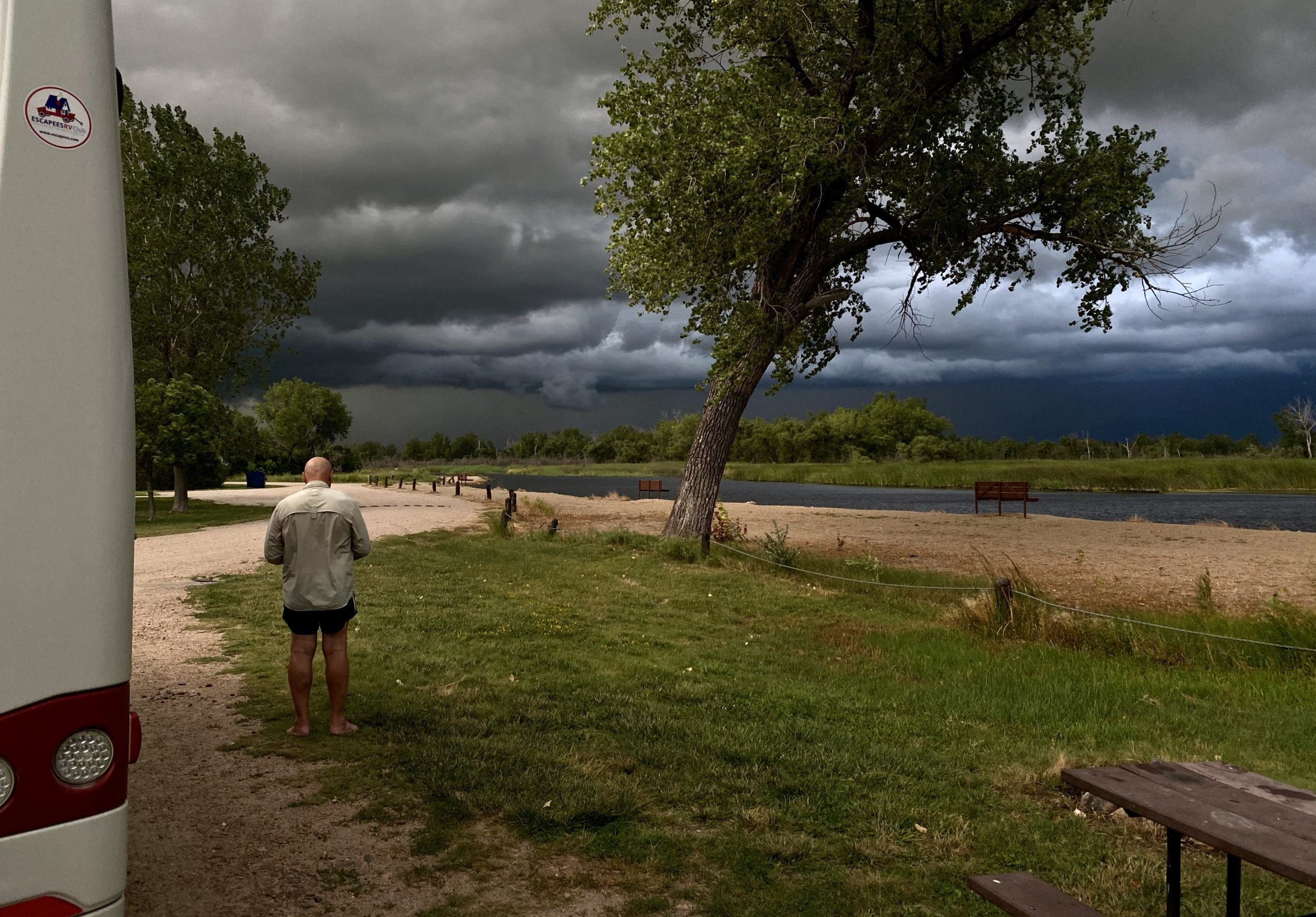 “Press On Regardless” takes new meaning in a pandemic.

When the 2020 COVID-19 pandemic derailed our plans to fly with our grandkids across the country this summer, we had to develop a different option for our annual family vacation. We live in Michigan, some 2,400 miles away from California, where Bill’s son Justin, his wife Jayme, and grandkids Kai and Noe, live. Since both families own RVs, it didn’t take long to figure out the answer: Road Trip!

We decided to meet in Fraser, Colorado, at the home of my son, John. There would be plenty of room for everyone, and we could easily social distance. It would be a 1,200-mile trip from California for them, and a 1,400-mile trip from Michigan for us.

We set a very tentative proposal to meet in Colorado in August, and discussed the trip several times to make sure everyone was comfortable. Bill and I would arrive in Lucky Us, our 2015.5 Unity MB. Justin’s family would drive out in their camper van. With sleeping space for four and a porta-potty, they felt they could safely travel during the pandemic with their children, while keeping their interactions with the public to a minimum.

As August approached, the pandemic worsened and wildfires became another concern. We continued to talk. Should we go? Was everyone comfortable with the plan? Was this the right thing to do? Should we just stay home?

We took a collective breath and said, “Let’s do it!” Bill and I packed up and left Michigan for Colorado on Tuesday, July 28, knowing we could take time to spread out our journey to meet them August 5 in Colorado, driving 300 to 400 miles each day.

To make our trip as safe as possible, we brought and used disposable gloves, masks, and hand sanitizer, took showers in our RV (we used public showers pre-pandemic), and limited our trips into stores.

Once we left Michigan, we spent our first night at Illini State Park, near Marseilles, Illinois. A quick jaunt south of I-80, this campground provided a beautiful, wide, riverfront site and a picturesque sunset over the Illinois River. 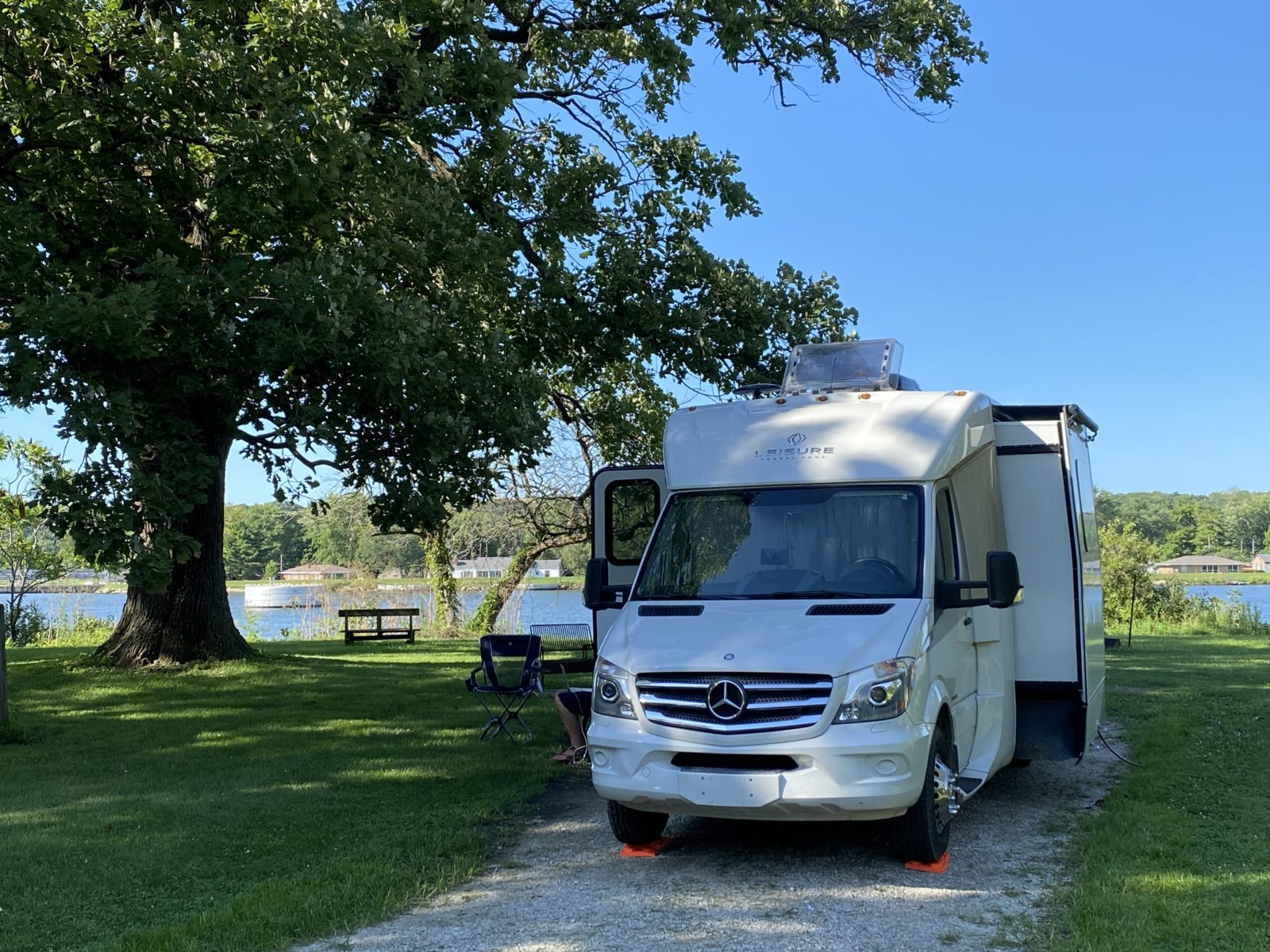 Next stop? Arrowhead Park in Neola, Iowa, a few miles east of Omaha. Again, we looked for a place close to I-80, and this county park fit the bill. We were 384 miles closer to our Colorado destination, and found a site away from the others. 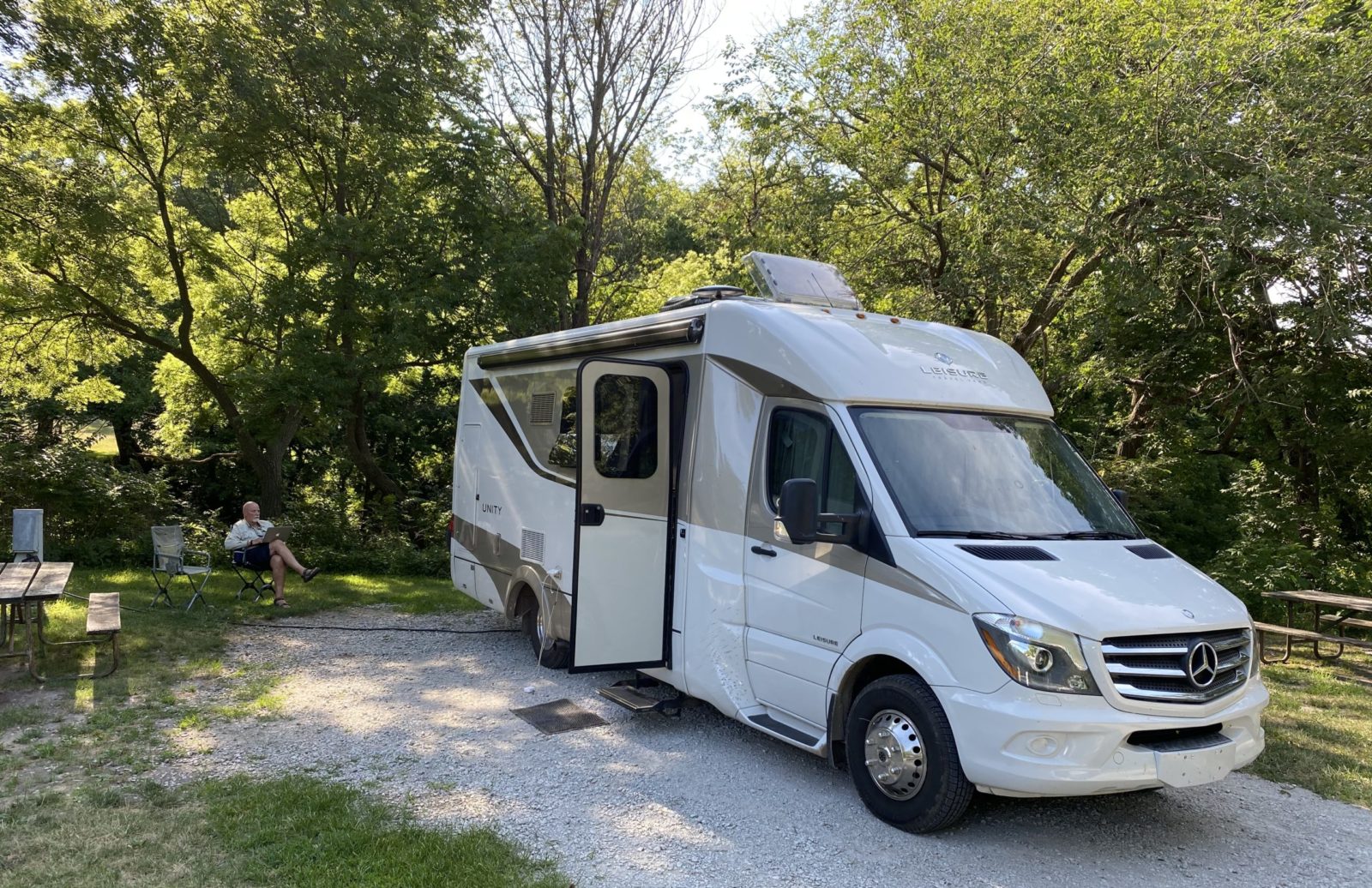 Day three, we drove another 300 miles to Buffalo Bill Ranch State Historical Park in North Platte, Nebraska, one of Bill’s favorite places to stop in the Cornhusker State. 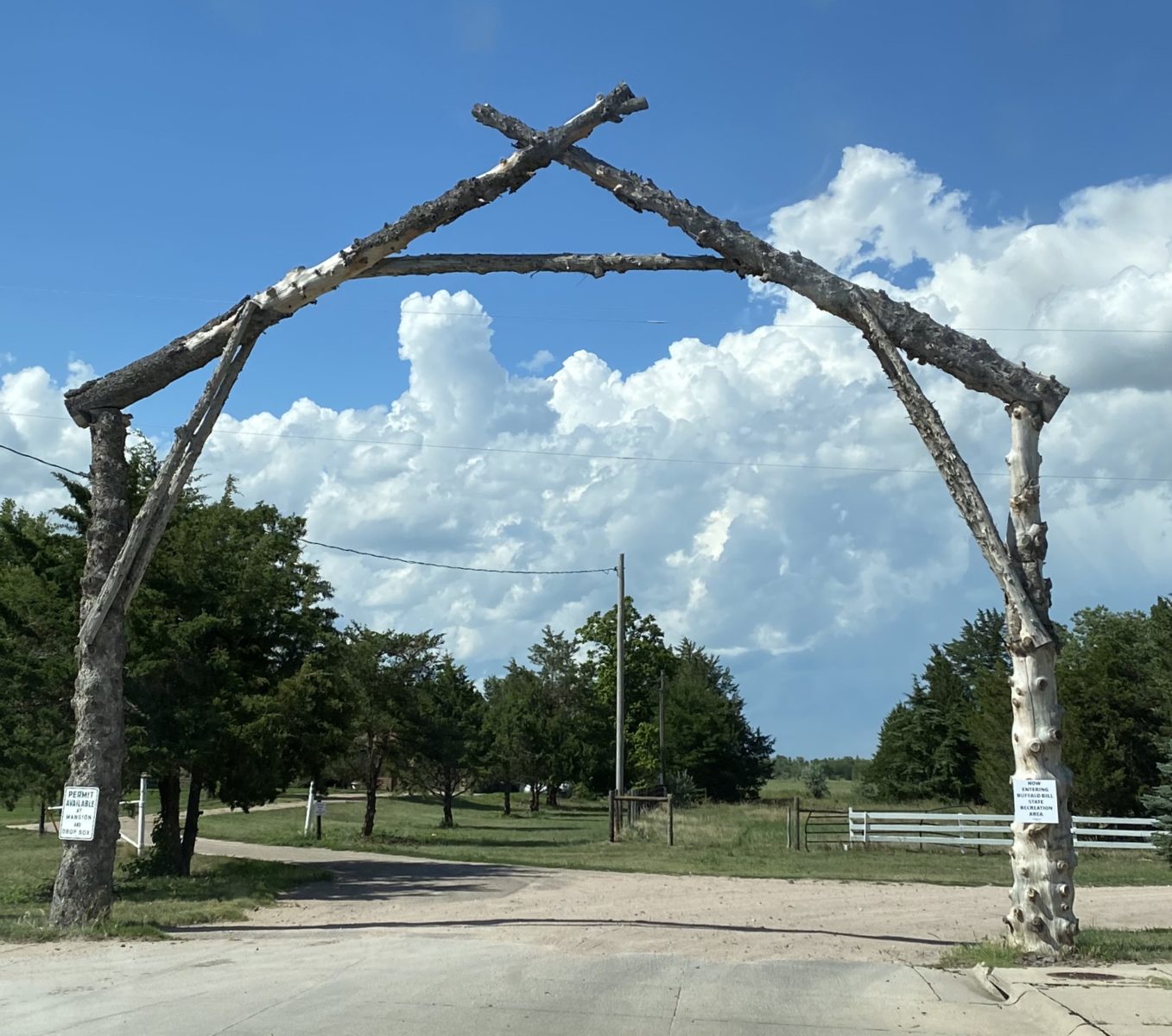 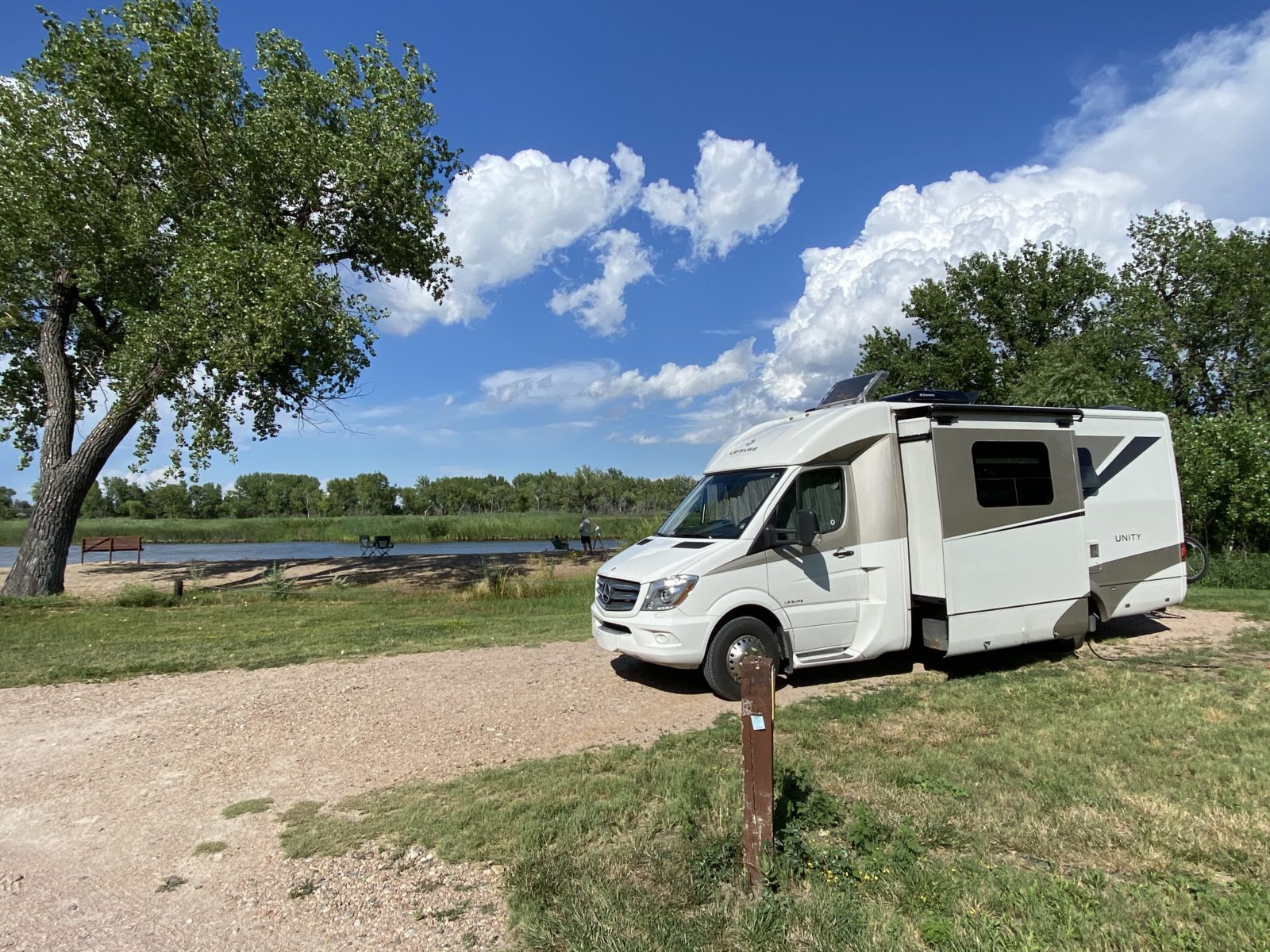 Are those clouds telling us something?

We found a fairly isolated site on the North Platte River, which rises from Colorado, and had time to take a quick dip and relish the picturesque skies, until we realized that the clouds were forming into something different… as in, a rip-roaring prairie thunderstorm, with the potential for much worse. When the winds began blowing, we quickly closed both roof vents and our skylight, and then ventured outside to watch as the clouds grew darker and more ominous, moving quickly across the sky, first eastward, then backwards. Bad news. Lightning lit up the sky without relent, closing in on us as the winds howled. We sheltered inside as the rain began pelting our home. Watching the radar on our weather apps, we listened to the winds pelting the rain horizontally across our windows as lightning bolts flashed and thunder roared closer. We watched the wind whip the trees, glad we were not parked under any. Thankfully, a good hour later the storm moved east, and we relaxed. 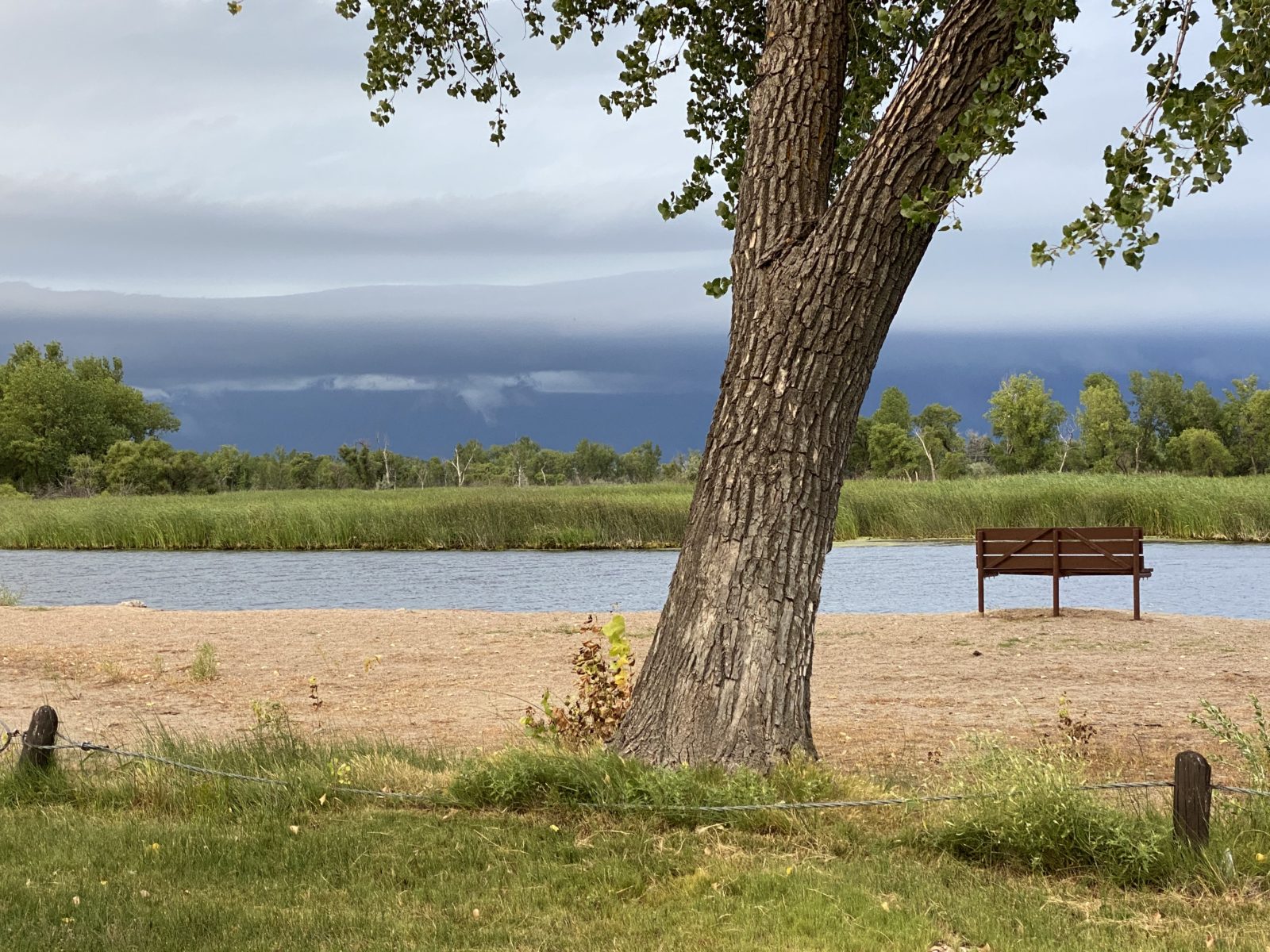 A storm is coming! With eyes glued to our weather apps, we watched the clouds roll across the sky. 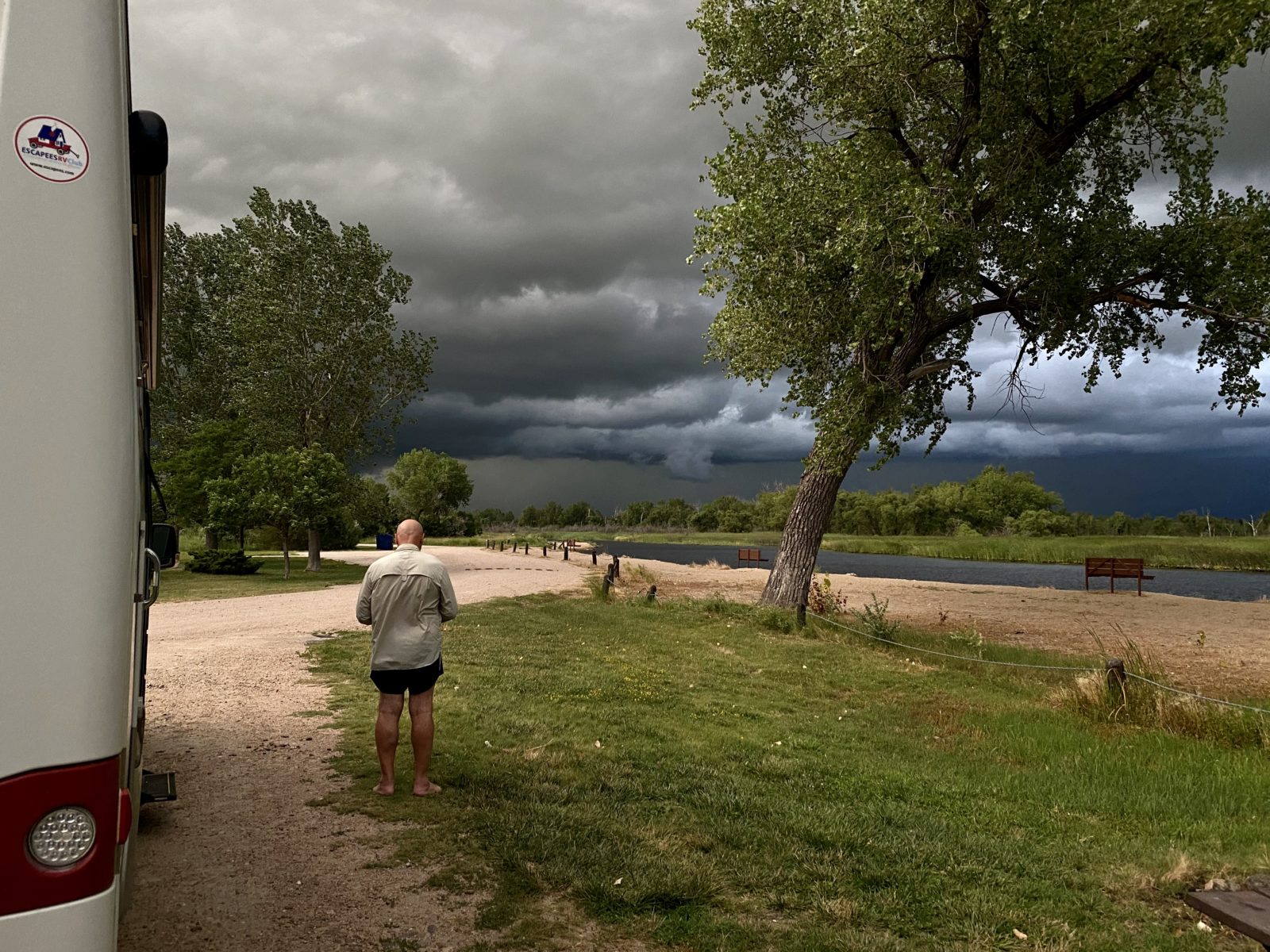 Skylight and fans closed, we watched the ominous storm come closer until it was time to shelter inside.

Day four, we drove to Denver, and then headed west “up the hill” into the mountains on I-70 to Silverthorne, hoping to get a campsite at the nearby Blue River Campground. This campground, with fishing access on the Blue River, was on Bill’s bucket list. Finding all the sites taken, we drove a bit north to find an open spot at Prairie Point Campground for the night, determined to rise early, pack up, and grab an open spot at Blue River. 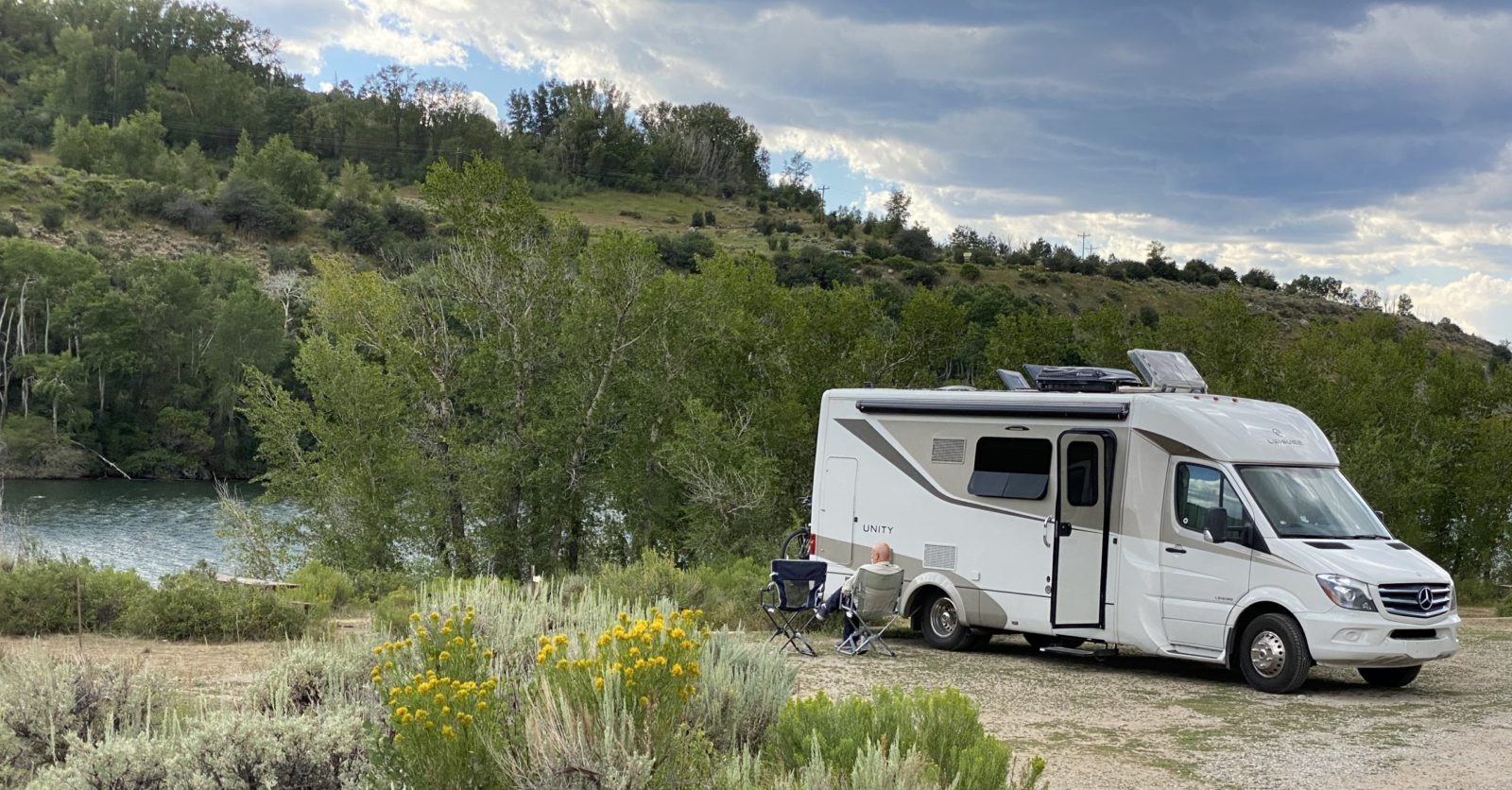 The Prairie Point Campground, north of Silverthorne, is a popular one-night stop for travelers.

Next day, we found a riverfront site at Blue River Campground. Bill fished for trout, and we spent evenings watching the sun disappear into the mountains, and even had another LTV nearby as company. 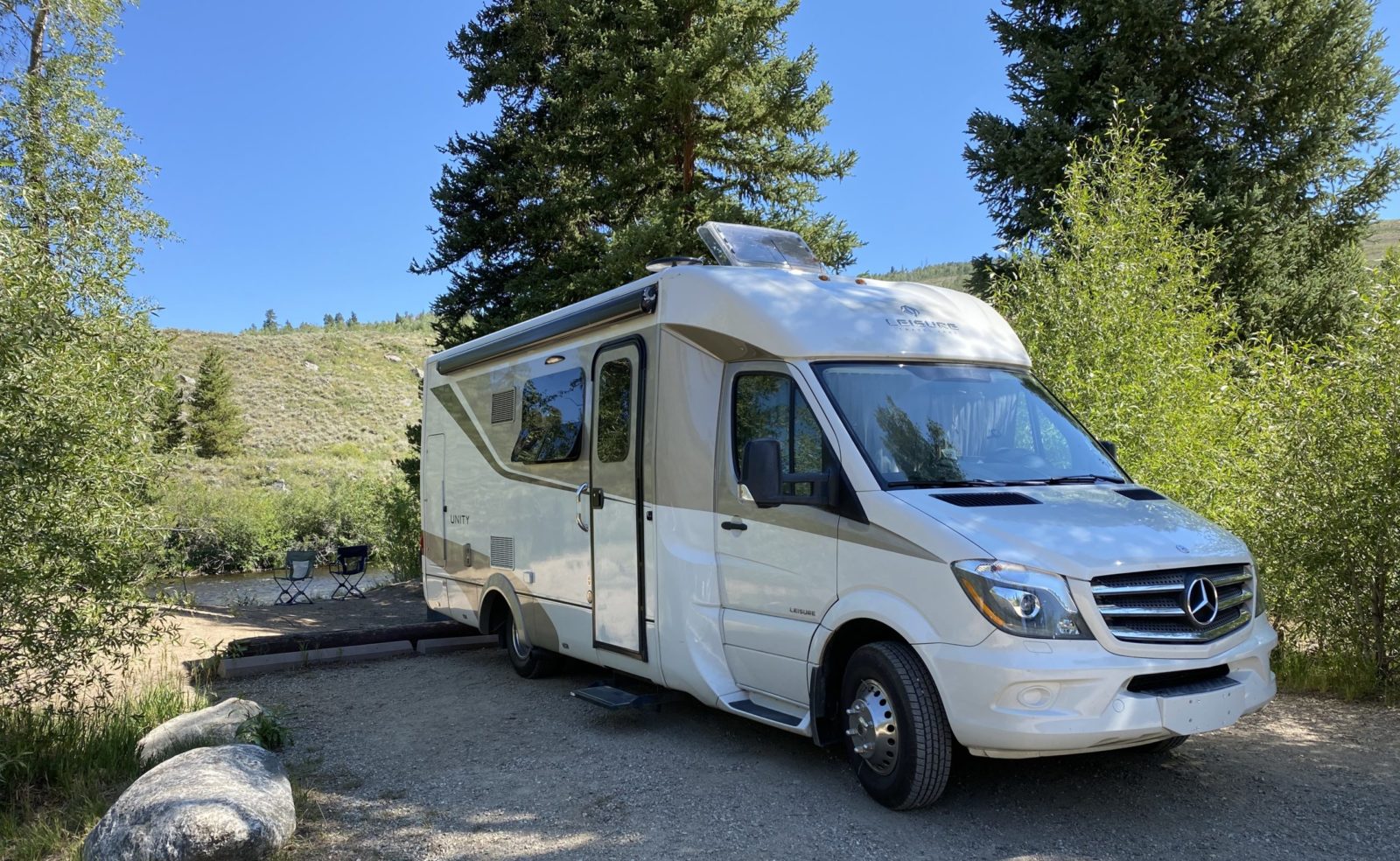 Our riverside site provided beautiful vistas, and offered Bill the chance to flyfish. 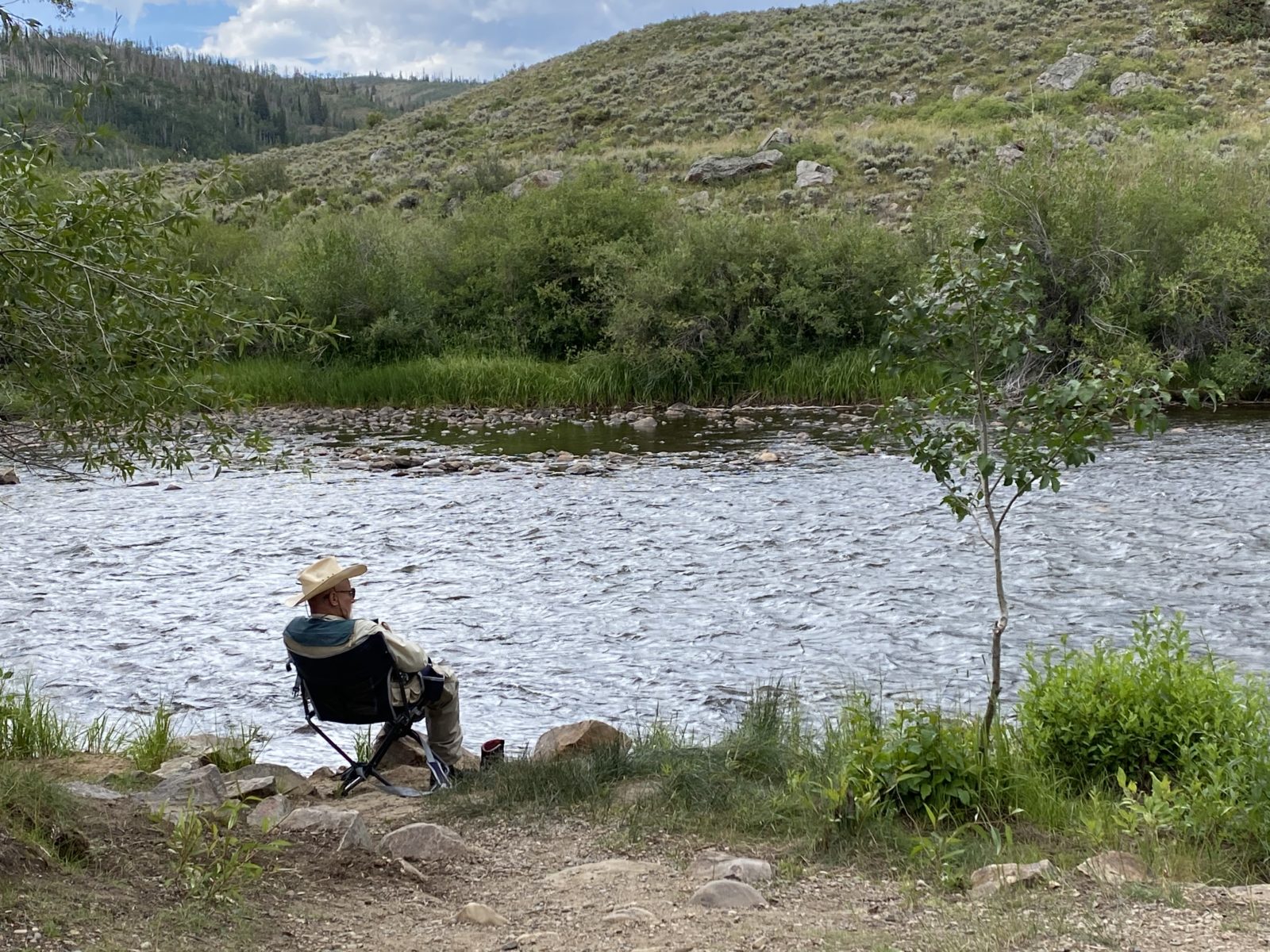 A day well spent relaxing by the river.

After spending two nights there, we headed to Fraser, near Winter Park, Colorado, to see my son, John. Two days later, Bill’s son and his family joined us. 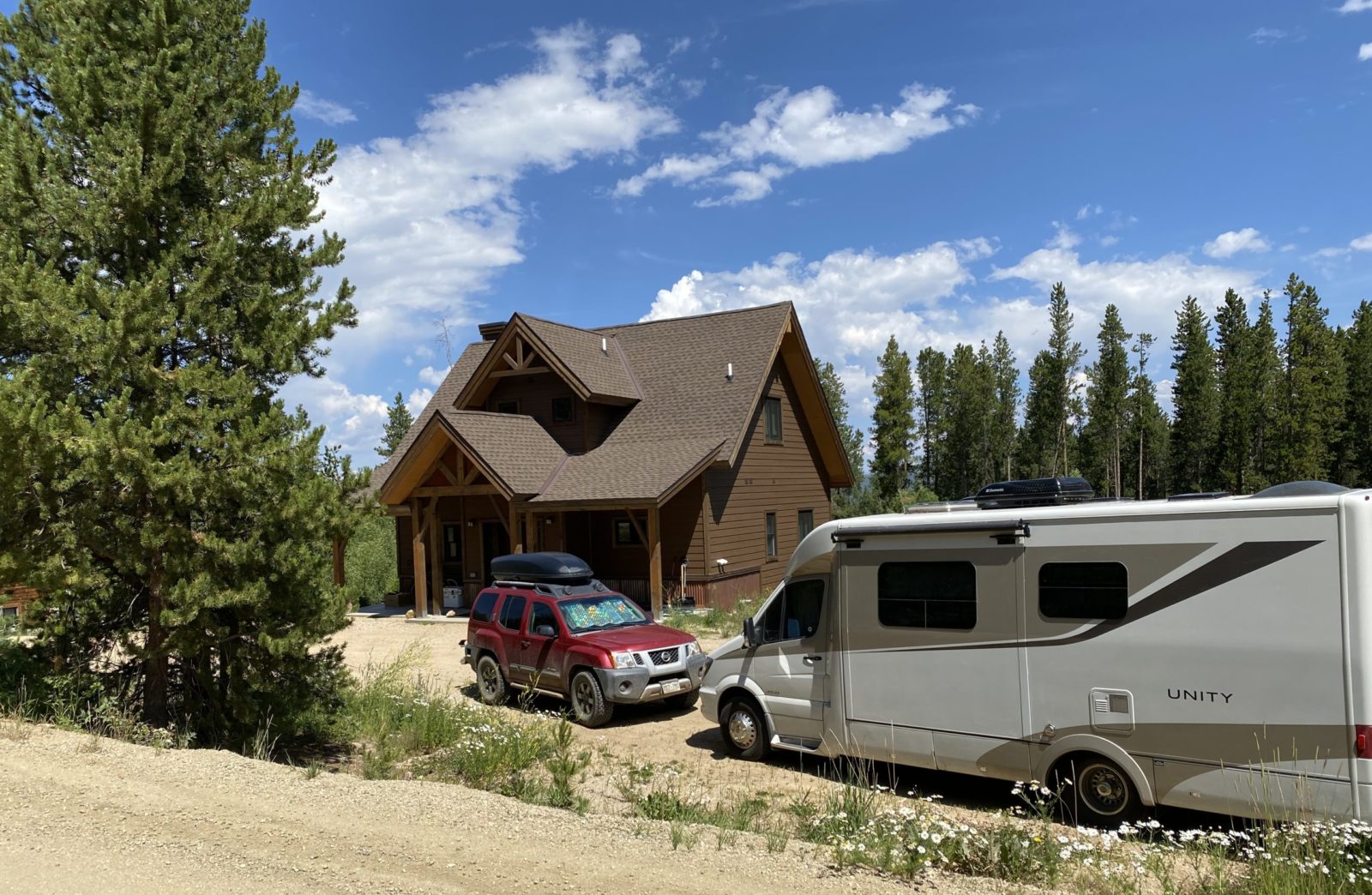 Grand Meet Up: Traveling from Michigan and California, our families met in Fraser, Colorado. 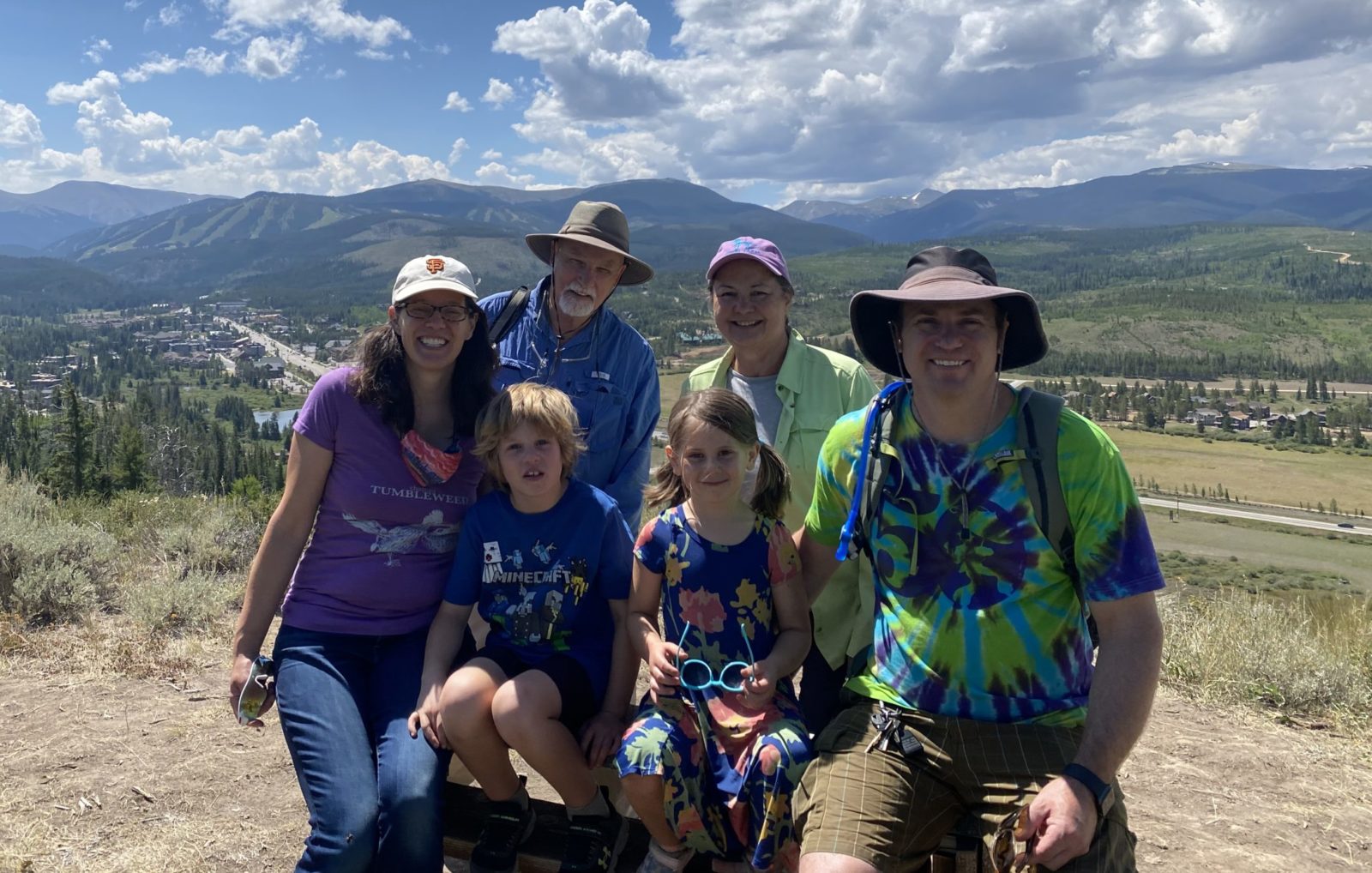 All together now, our families met safely in Colorado.

Pawnee Campground or Bust – We Busted

After spending a few days at my son’s home, we planned to leave the Winter Park area, drive over Berthoud Pass back to I-70, go east, and then north to Pawnee Campground in Brainard Lake Recreation Area. Berthoud Pass, a 6.2-mile four-lane highway, is noted for its 6.3 percent grades and numerous 15-20 mph switchbacks on both sides of the pass. The drive provides breathtaking views of the Rocky Mountains from 11,000 feet. We had driven cars over the pass before, and knew that trucks, RVs, and other large vehicles regularly made the trip.

The drive up and then down the pass was uneventful until “the event.” We thought we heard a low rumbling sound when rounding one of the curves coming down the pass, but figured we were all set. But as Bill carefully neared the end of this twisting road, heading for the town of Empire and I-70, we heard a loud “psssssssssss” from the rear of the vehicle. With nowhere to stop, Bill continued a bit down the road until a wide dirt shoulder gave us a place to safely pull over.

Our initial thoughts were right, as we watched the passenger-side rear tires deflate. Several calls to our road service carriers and local 24-hour truck tire repair companies brought help our way. Our bent chrome wheel trim, or beauty ring, with valve stems yanked out, found in the road with help from a passing motorist, made us question if we wanted to continue to drive with steel wheels. Before nightfall, we were back on the road, heading to Pawnee Campground. 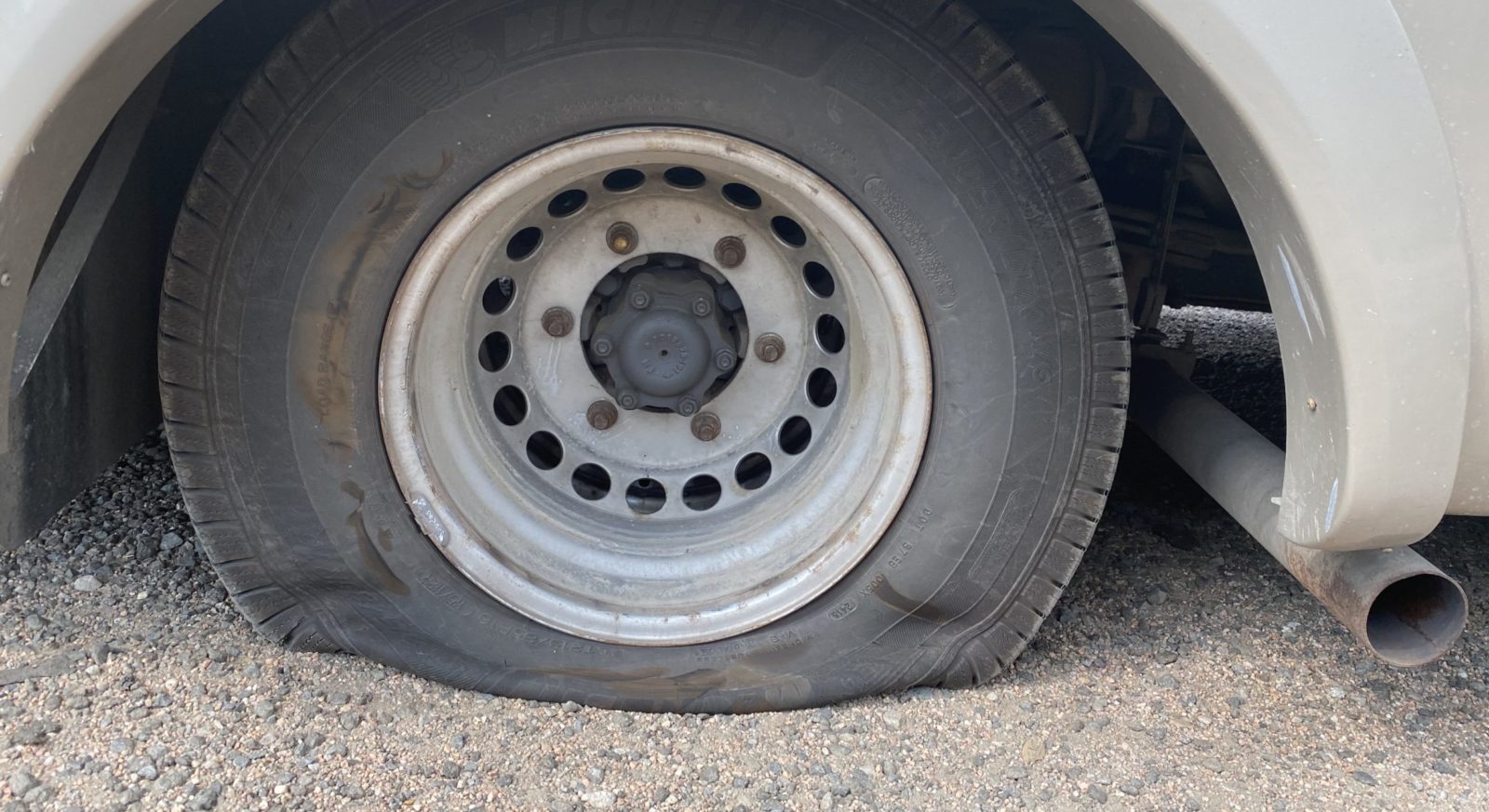 Oops! After suffering two flat tires in the back, we replaced our steel wheels with Alcoa rims once we were back in Michigan. 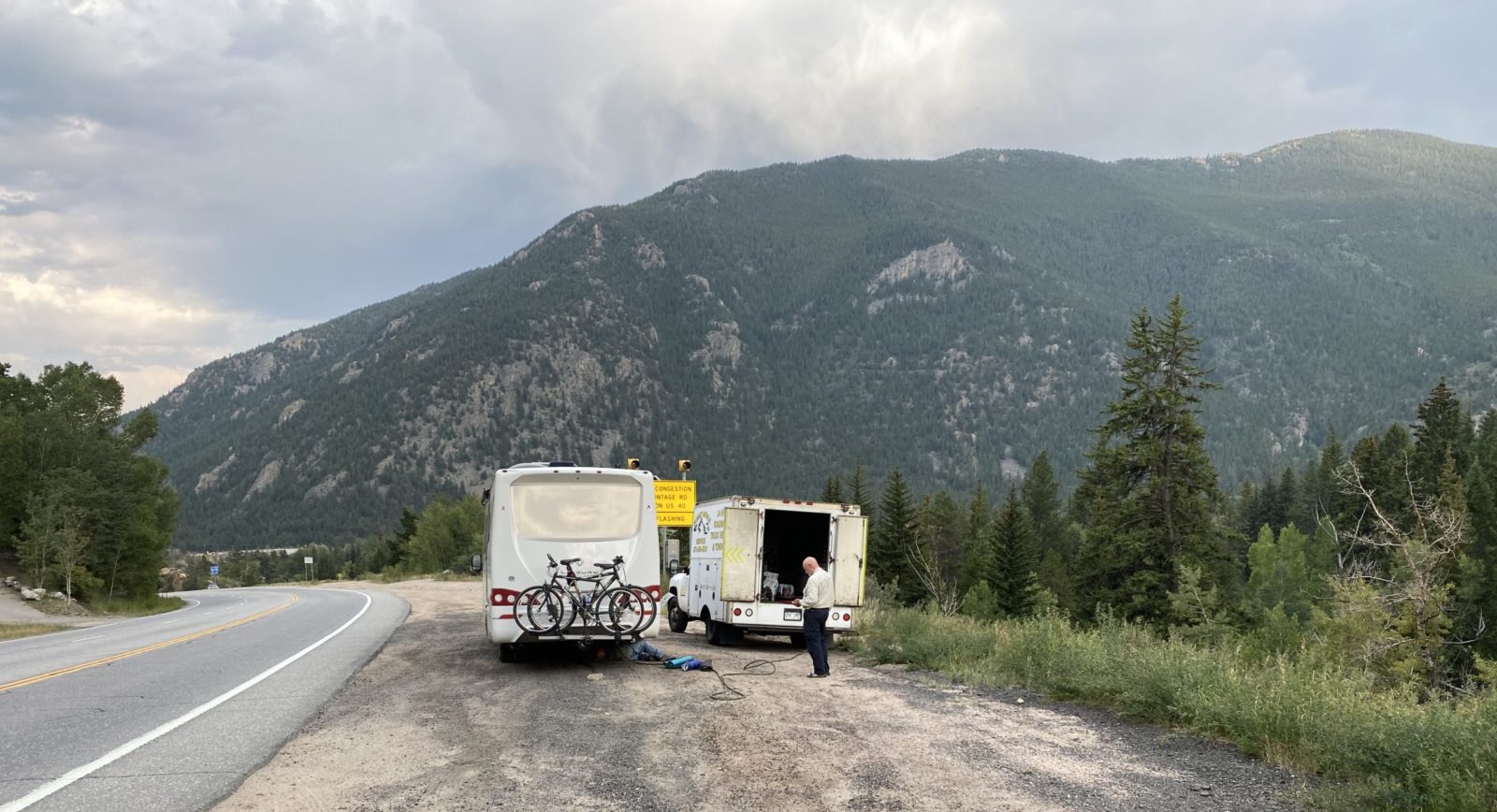 Thankfully, a wide shoulder gave us safe shelter while we waited for help. 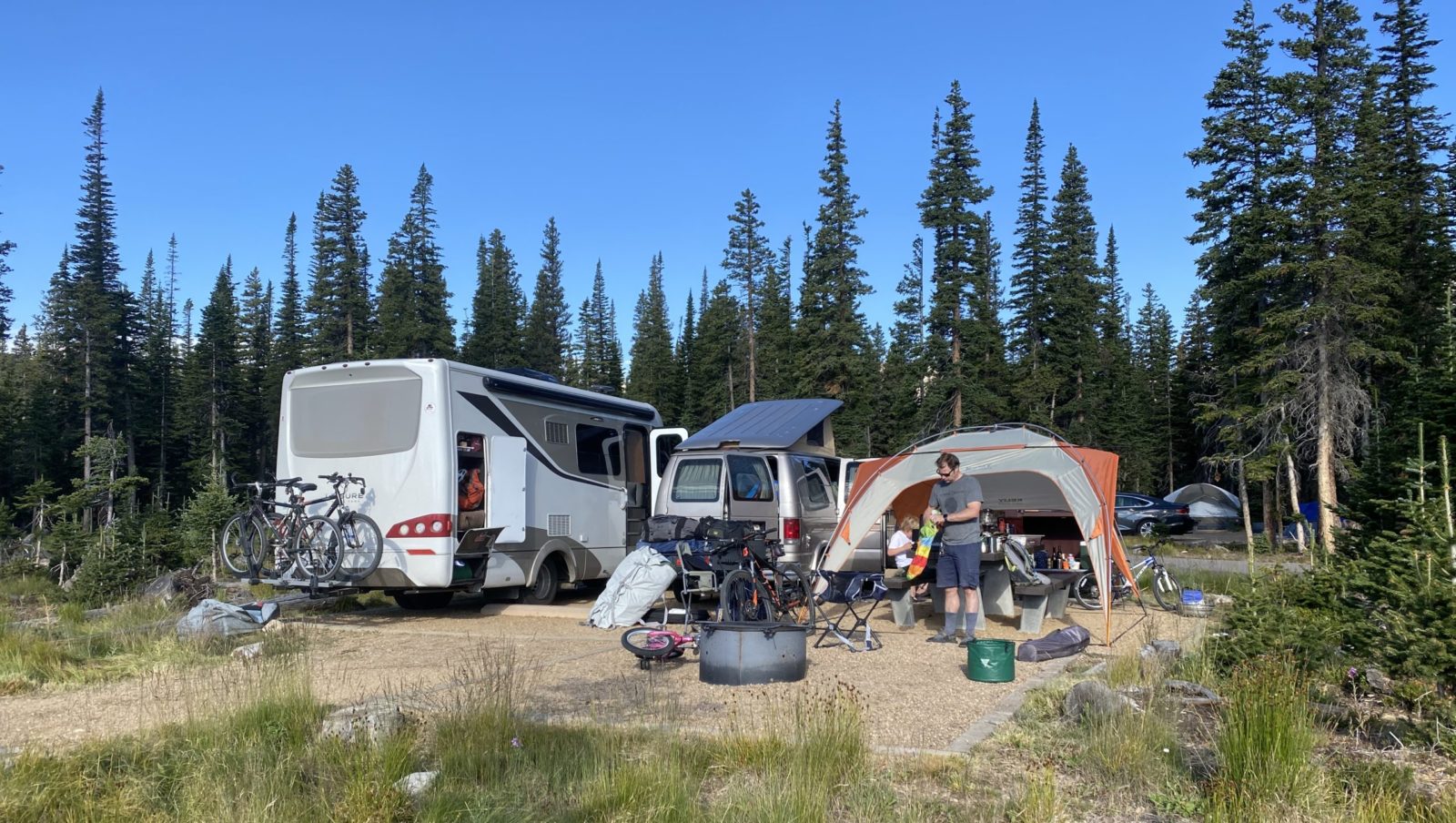 Our campsite at Pawnee Campground provided just enough room for two RVs. Here, Justin starts packing up to move to our next destination.

At an elevation of 10,300 feet, the high alpine environment at Pawnee Campground at Brainard Lake Recreation Area in Roosevelt National Forest is a picturesque mountain escape nestled in the Front Range Rockies north of Nederland, in Ward. We fished, hiked, and shared meals together at our campsite, while keeping social distancing. 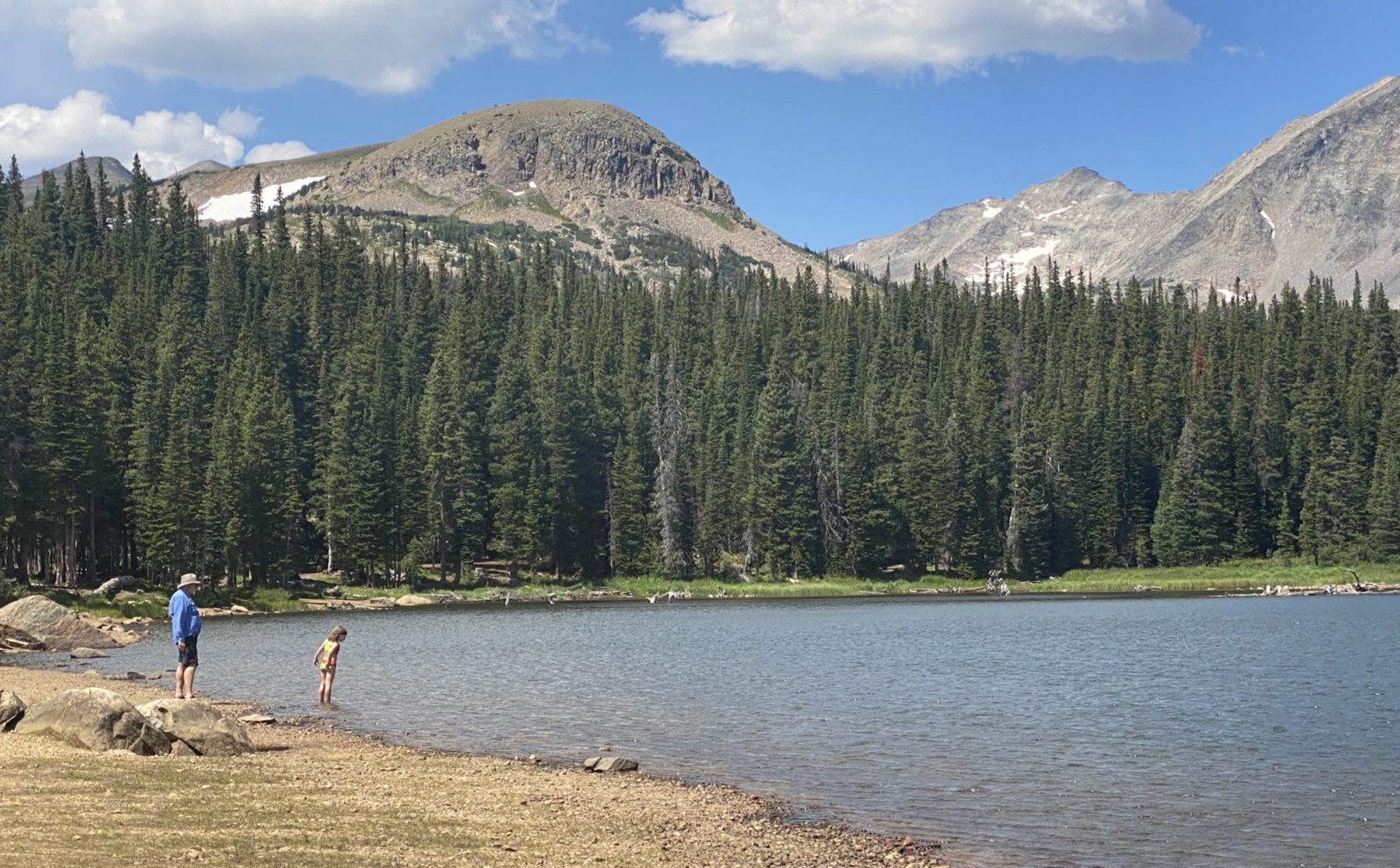 Wildfire Watch: Press On Regardless

After spending two nights at Pawnee, we broke camp and ventured toward our next destination, Chapman Campground, northeast of Aspen. Our map apps had us head south to I-70 and west to Eagle, to the campground.

Now, we were very aware of wildfires on the west side of Colorado. Looking at our cellphones, we could see that I-70 was closed between Glenwood Springs and Gypsum due to “an incident” and would open at midnight. No worries; we’d just get off at Eagle and head south toward our destination.

We drove to Sylvan Lake State Park, wondering why this dirt road was so busy with dusty cars coming back the other way. No worries, we thought, until the road narrowed when we came to a large sign that warned “trucks, large vehicles, RVs” should go no further at the entrance of its winding path.

Turning around, we joined the parade heading back to Eagle. We didn’t have cell service and couldn’t contact Justin and Jayme about our wild goose chase, but we managed to spot them on the way back, heading toward the same warning sign.

Once we all arrived back in Eagle, we stood on the sidewalk, scanning our phones for routes to Chapman Campground. Fortunately, a helpful local informed us that we were heading into the giant Grizzly Fire that exploded overnight, shutting I-70. All those dusty cars and trucks we saw were trying to find a way west. We were unaware of what we were attempting to drive into until then.

We made a group decision to drive north to Steamboat Springs, hoping to find a campsite along the way. But the farther north we drove, the thicker the smoke became, with ash sometimes falling on our vehicles. It became obvious that the only place we could shelter from the smoke was back in Fraser.

We’ve traveled in smoke and fire situations before. Two years ago, we vacationed in northern California, up to Medford, Oregon. We had to change plans frequently as the smoke blew into various areas just as we were about to get there; several times we had change directions to seek cleaner air. With two small children in tow, no one wanted to risk breathing harmful smoke then, or now. We used airnow.gov when we had cell service. Unfortunately, driving along isolated roads, we couldn’t depend on electronic information, and often had to rely on our eyes and noses to point the way. 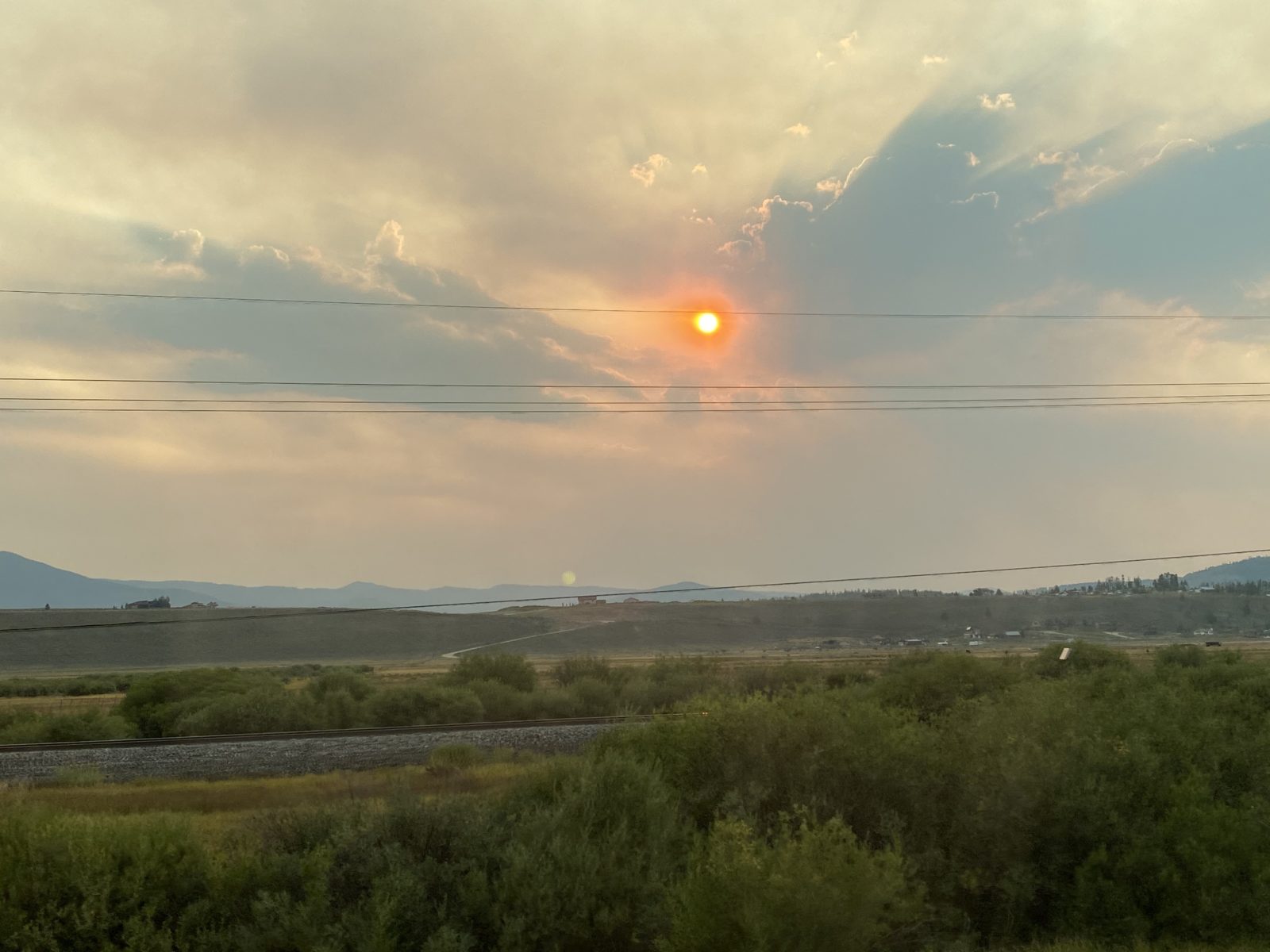 Smoky skies no matter where we went. We just could not escape. 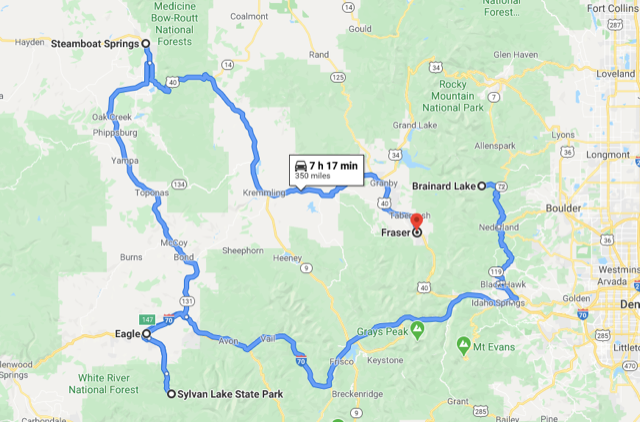 Western Colorado Day Tour – Driving nearly in a circle, we tried, but failed, to escape the smoke. In hindsight, we could have traveled south from Brainard Lake to I-70 west and then north to Fraser. That would have been too easy, though.

Now nearing a seven-hour drive day, we wearily re-entered Fraser, ordered a pizza, and settled in. After spending a few more nights, we said goodbye and each got behind the wheel, heading home.

A harrowing prairie storm, two flat tires, wildfires, and smoke, all while traveling during a pandemic, couldn’t keep us away.

If Your Plans Are Altered by Smoke and Fire

Several state and national apps, as well as the local news, can help you navigate smoky areas. Airnow.gov is one of several apps that can assist you, as well as several social media sites.

Michigan-based Leisure Explorers Bill and Denise Semion use more than 75 years of combined writing and photography experience to bring you along on their adventures across the U.S. and Canada in their 2015.5 Unity MB. Their cat, Sadie, joined them on their journeys, and now newcomer Molly will be tagging along. Bill is an award-winning travel/outdoor writer and author of two travel books. Denise is an accomplished photographer and outdoor communicator.