A Tour a Da UP: Pard Tree 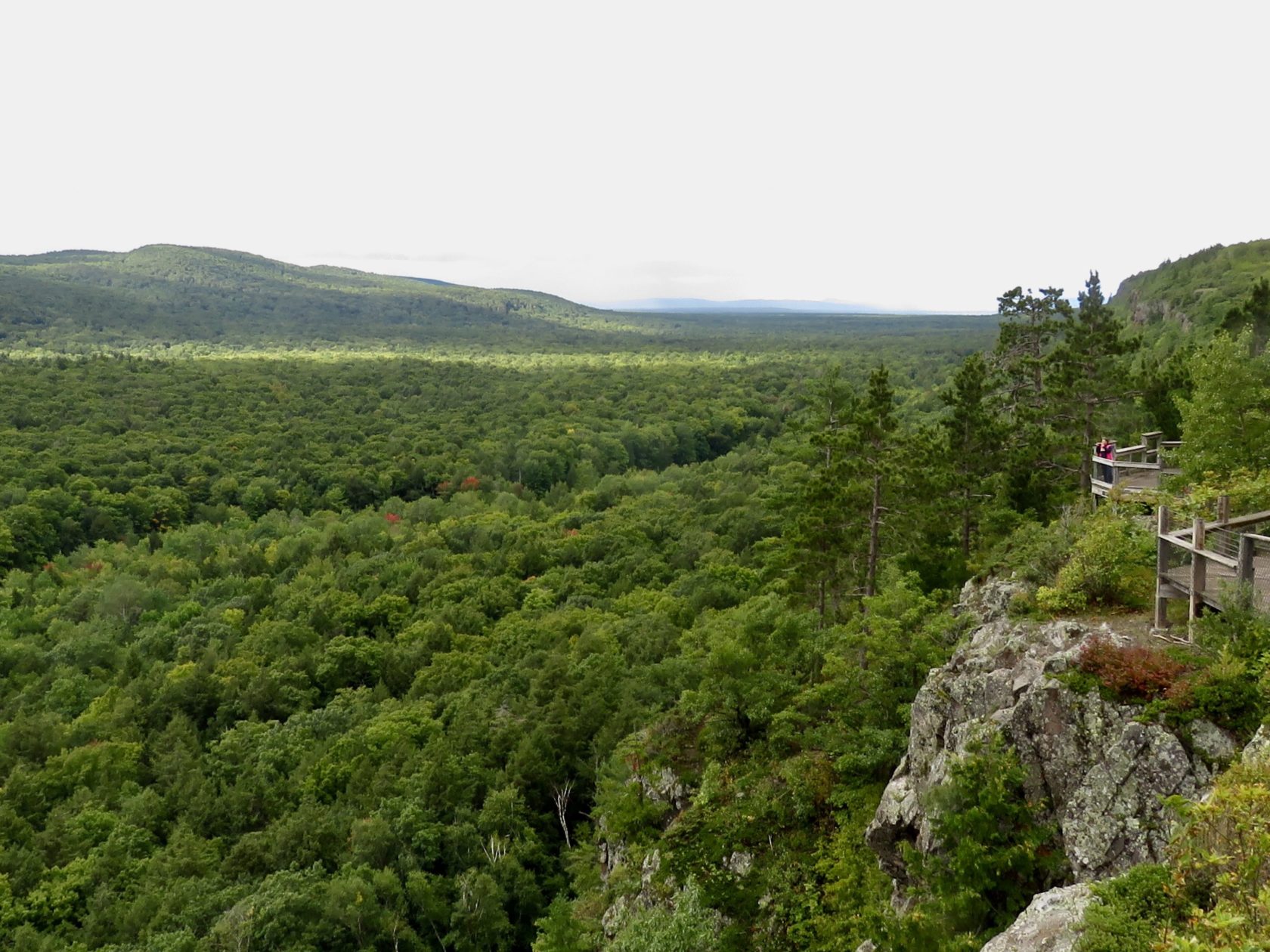 Editor’s Note: Bill and Denise Semion are members of LTV’s sponsored content team, The Leisure Explorers. Do you own a Leisure Travel Van and enjoy writing? Learn more about joining the team.

Hey, dere! Been a while dere eh?

Well, we’re back, with the last installment of our region-by-region tour of Michigan’s Upper Peninsula, called da U.P., which is a mix of rich farmland to deep, enveloping forest, spectacular shorelines to spectacular sand dunes, and contains some of the most rugged country and some of the most beautiful campgrounds in the eastern United States. It’s been our fortune to have visited the U.P. many times. I’ve been coming here since I was a kid, at first aboard car ferries that once connected the peninsulas before the Mackinac Bridge opened in 1957. We hope you’ll use these three parts in the collection of blogs to plan your own U.P. adventure. Here we go!

When we last left you, we were in the beautiful, rocky Keweenaw Peninsula which made several mine owners multi-millionaires with its fabulous cache of more than 10.5 BILLION pounds of copper that was extracted from the mines. Before that, we were in the eastern U.P. Now, before you leave, you may want to get more of an up-close view of what the Keweenaw has in store by booking a mountain bike, kayak, or another tour at Keweenaw Adventures.

Now, let’s trundle down the Keweenaw and head to Houghton on U.S. 41, then curl west a bit on Michigan Highway 26 or M-26 for short. It will take you through former mining communities and past Twin Lakes State Park, poised on two lakes, imagine that. Stay the night or push on towards the former paper mill town of Ontonagon (Onta-Noggin). This town has seen both boom and bust but is still considered the gateway to Michigan’s largest state park. It’s also where the Ontonagon River (which begins to the south at a lake we’ll also visit) joins Lake Superior. Ontonagon Township Park is on the Lake Superior Shore and is also a great overnight camping destination and gets you ready for tomorrow.

Head west, through the town of Silver City, where I spent a few summers and falls with my cousin, also named Bill, as a kid. Just beyond is Union Bay, the main campground for what’s officially the Porcupine Mountains Wilderness State Park. Begin at the state park’s visitor center near Silver City. You’ll learn it’s so-named because wilderness it is. All 60,000 acres, 35,000 acres of which is old growth, forest, and the largest uncut hardwood/hemlock stretch in the Great Lakes. 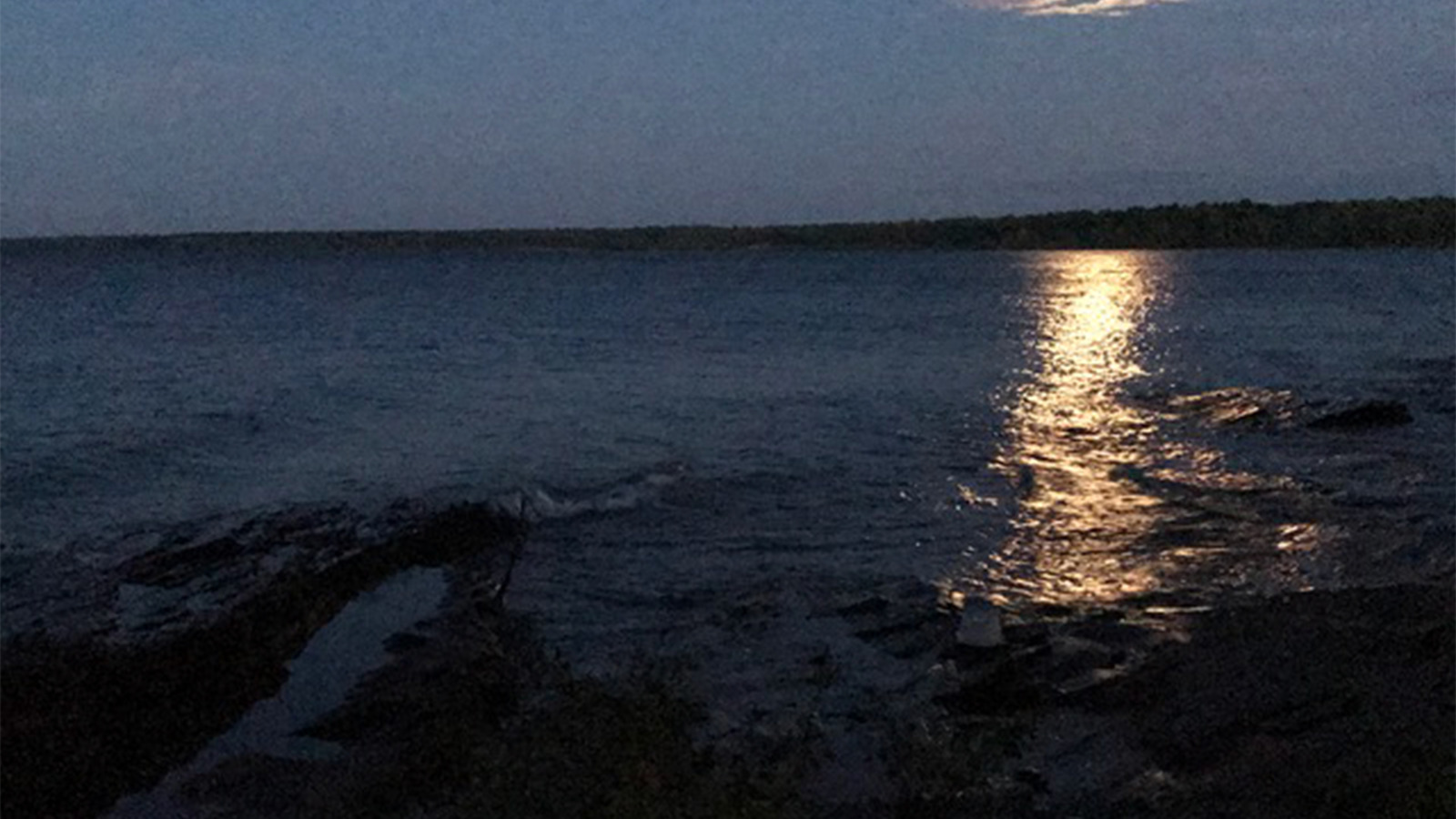 Moonrise at Union Bay Campground in the Porkies. 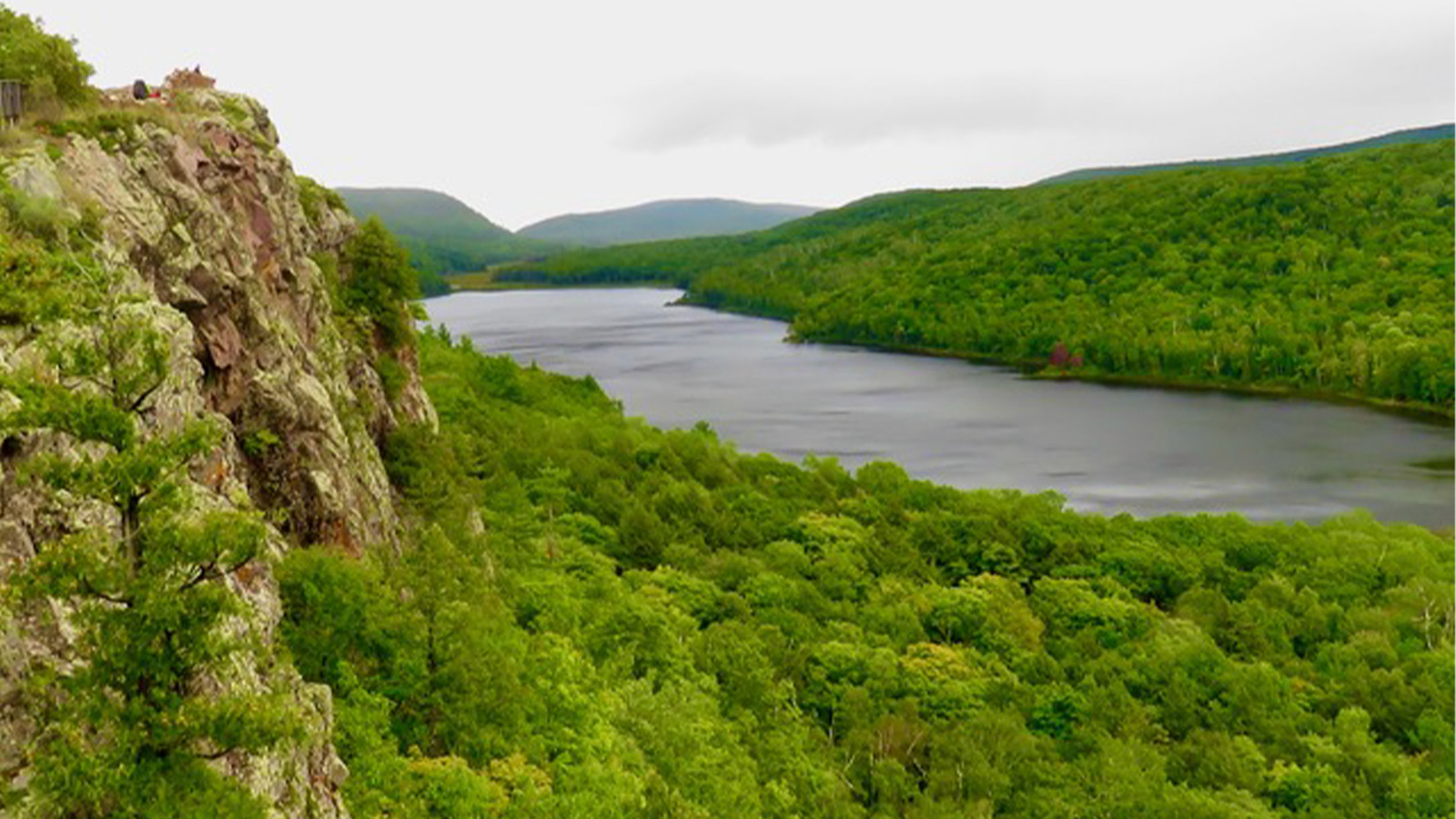 Lake of Clouds in the Porkies. Hike beyond the rise on the right and you’re rewarded with a view of Mirror Lake.

The Silver City area is also home to the park’s first campground, Union Bay, with access to Lake Superior, we as kids would run from the cold lake to warm up in the brook entering the lake. You can also hike more than 90-plus miles of trails, and stay overnight in the park’s rustic lakeside cabins including one not far from the overlook where your closest neighbor may be a black bear, wolf, and yes, porcupine. You can also soak in the view from Lake of the Clouds overlook, a rocky promontory that is especially spectacular in fall, with the Carp River below. Fish also trout rivers like lake-run steelhead in early spring. There’s also an annual music festival here each August.

Another activity is an easy hike that will take you to Lake of the Clouds and a few miles further is Mirror Lake. The park recently added a number of amenities and improvements to its downhill ski area including dining, bike rentals, and trails, plus kayaking tours and rentals. Read about it here. 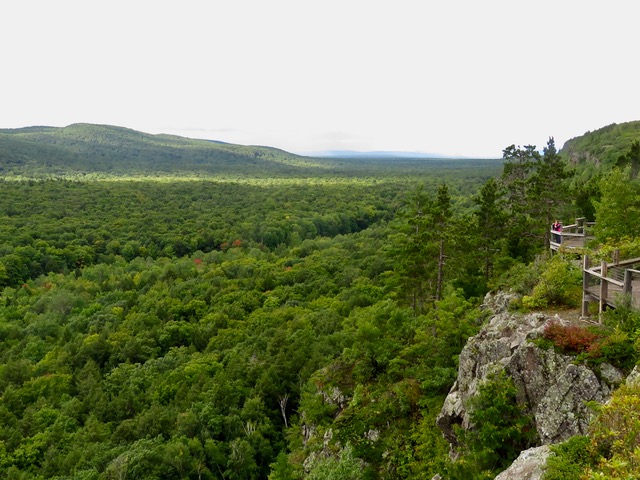 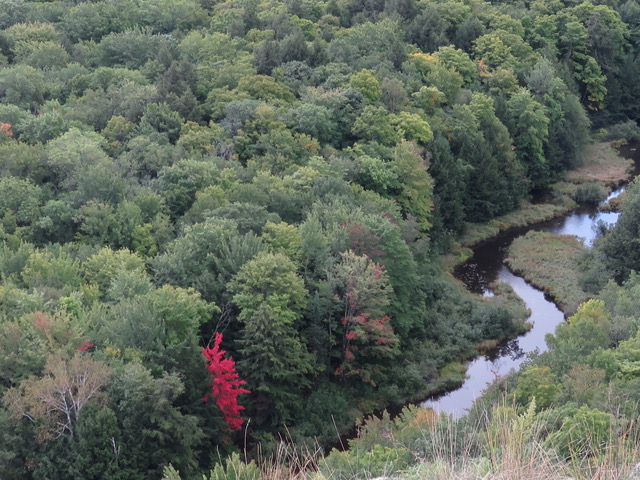 At the park’s western boundary is one of a series of waterfalls on the tumbling Presque Isle River which is a short walk from Presque Isle Road. You’ll be looking at several of the 200-plus falls that grace the peninsula, many at the rocky western end. The area is also home to several downhill ski resorts that if you visit in winter, will give you an experience that’s about as close to a western ski resort as you’ll find in the Midwest, despite the obvious vertical height difference, and certain Minnesota resorts notwithstanding. Your reward at the end of the drive is the park’s more primitive Presque Isle River campground and a beautiful view of the lake. But wait, there’s more. Head south on Forest Road 117, west on U.S. 2 from Wakefield, then look for the signs for the Black River National Forest Scenic Byway, one of the first such byways with that designation. It follows the Black River on its way to Superior and has stops at six falls and at the end another spot to overnight at the Black River National Forest Campground. You’re also rewarded with a stroll across the suspension bridge above the river mouth and on both drives are beautiful photo ops. 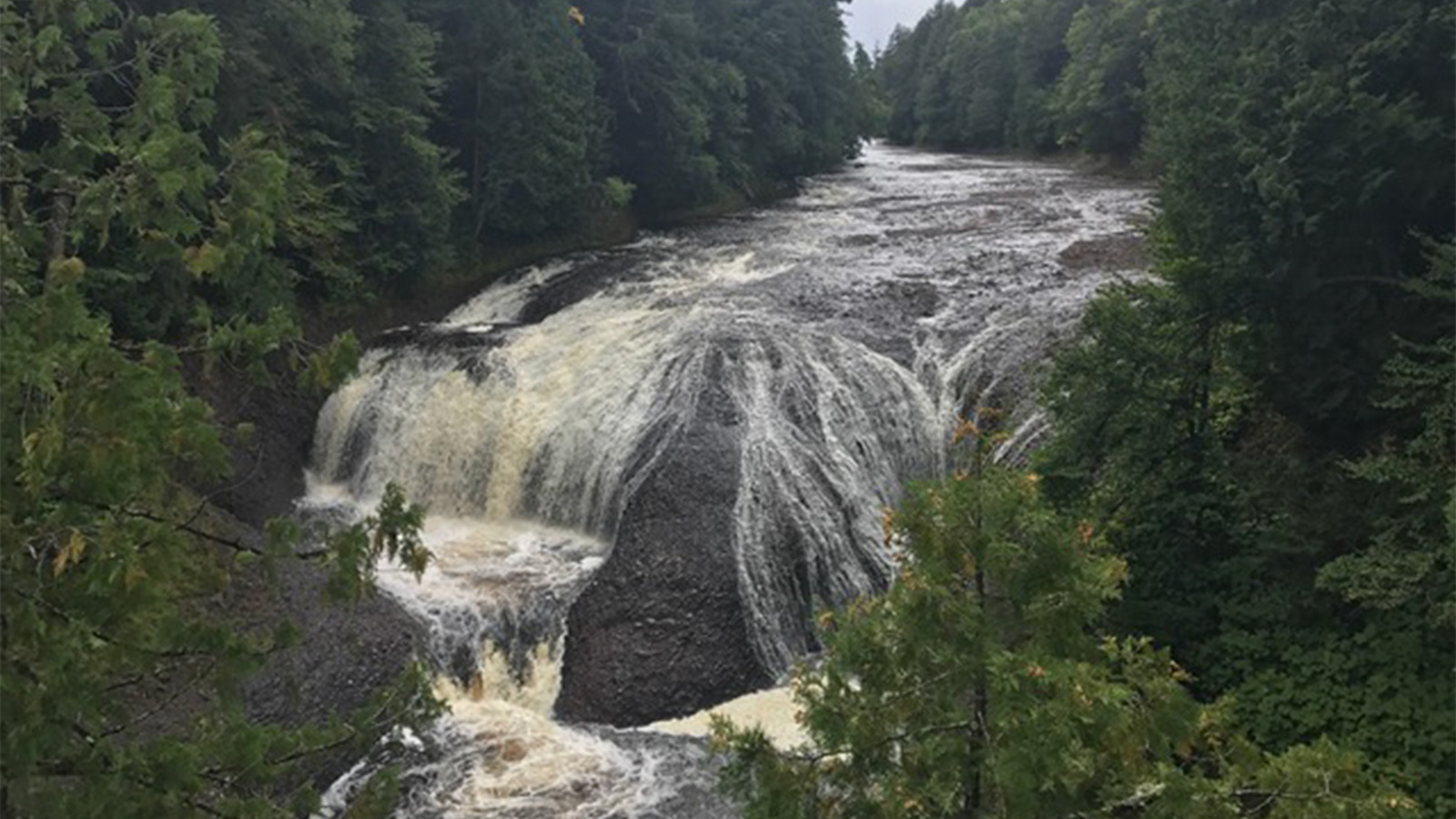 One of several falls along the Black River Scenic Byway

The next day on the way out the same road, you may want to stop at Copper Peak. What is it? Only the world’s largest vertical ski jump, so high the jumpers were called sky flyers, in winter. The platform now provides the highest, unobstructed, 360-degree vista in the Midwest, overlooking nearly 40 miles in every direction. Take the chairlift up, then the elevator even farther up for that view, again, unbelievable during fall color season. There’s also a mountain bike trail.

Head back to Bessemer, named for a steel-making process, and you know you’ve left copper behind and you’re now back in iron ore country. This is part of the region where the iron ore boom began when Douglass Houghton noticed his compass swinging wildly, and discovered the ore closer to Marquette. Make a note of the nearby downhill ski areas also offering summer activities, as well as cross-country ski trails.

Continue west past some of the region’s ski areas to Ironwood, on the Wisconsin Border. Ironwood is a former rip-roaring mining town that like Hurley, WI, just across the state line, and down the middle of the street, has tamed, with Hurley still less tame than Ironwood.

While you’re here, pick up a hat or other clothing here at the home of Stormy Cromer hats, the kind Elmer Fudd wears. Take a tour of the factory and learn the history of the inventor and the hat Stormy created. 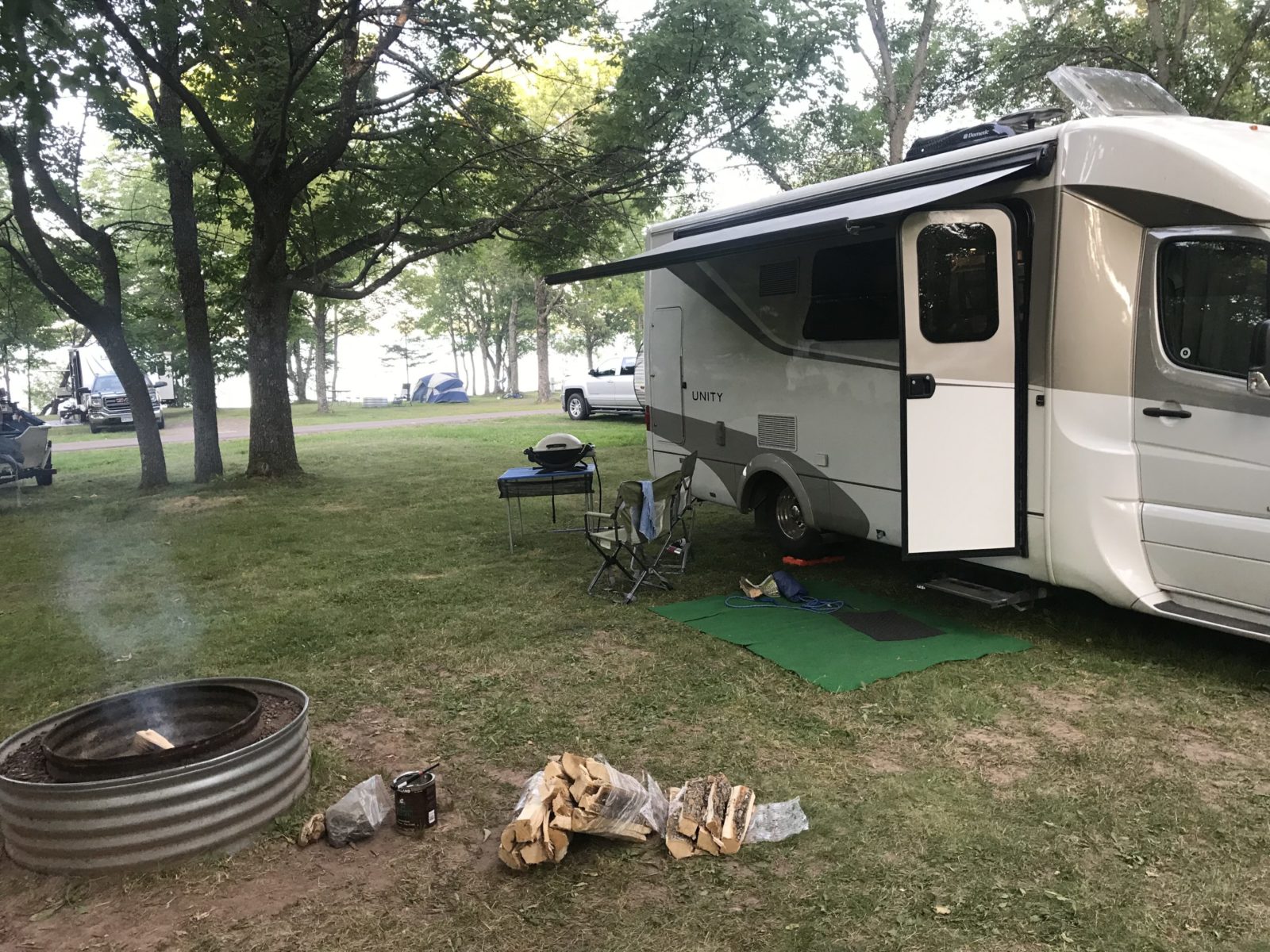 Now let’s backtrack a bit on U.S. 2 to Wakefield, where you’ll swing southeast for a bit. Turn north onto M-64 and on your right will appear Lake Gogebic, the U.P’s largest inland water, so big it’s in two counties. On it, stay at Lake Gogebic State Park, or farther north at Ontonagon County Park, or at the south end, Gogebic County Park. 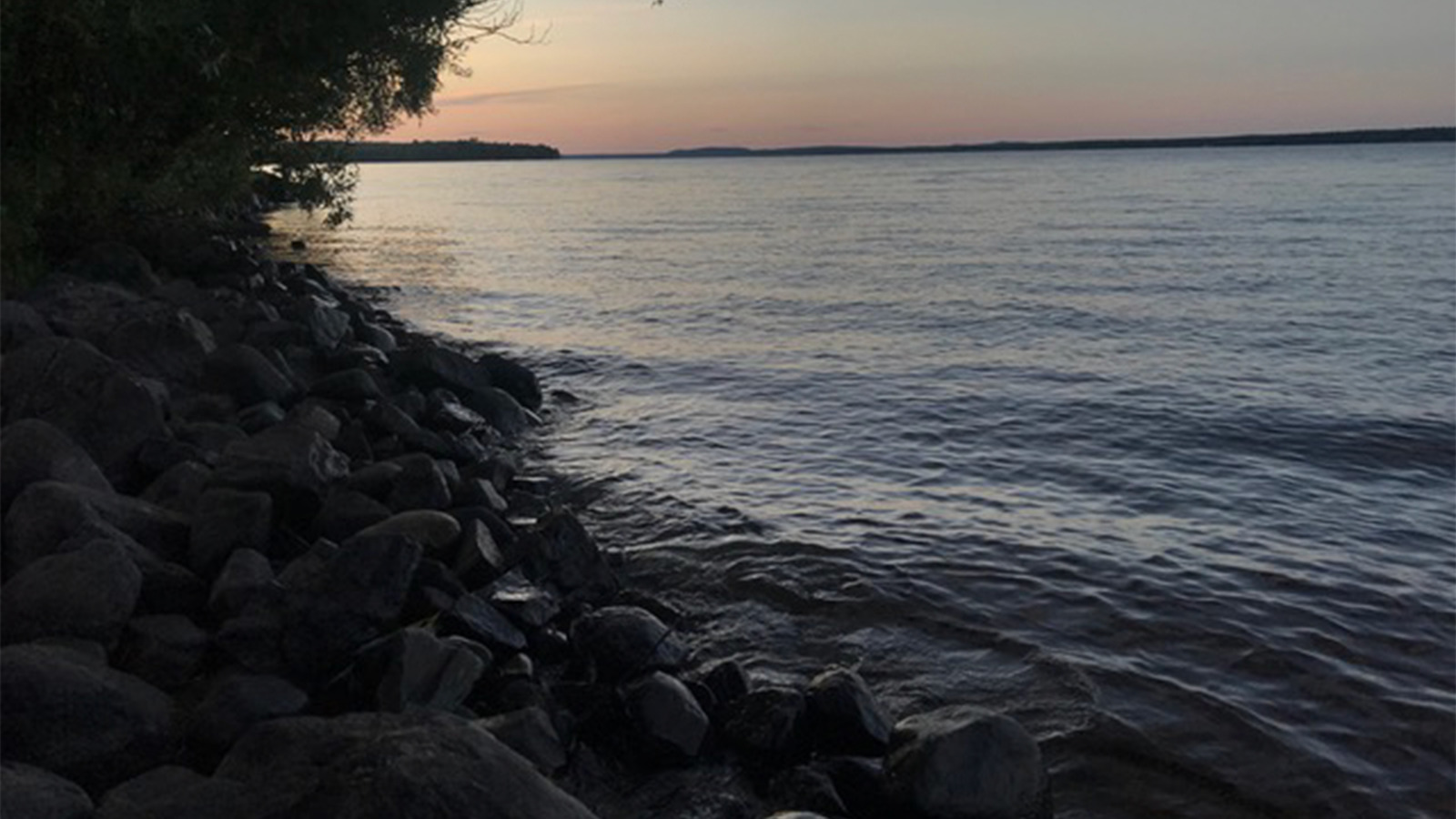 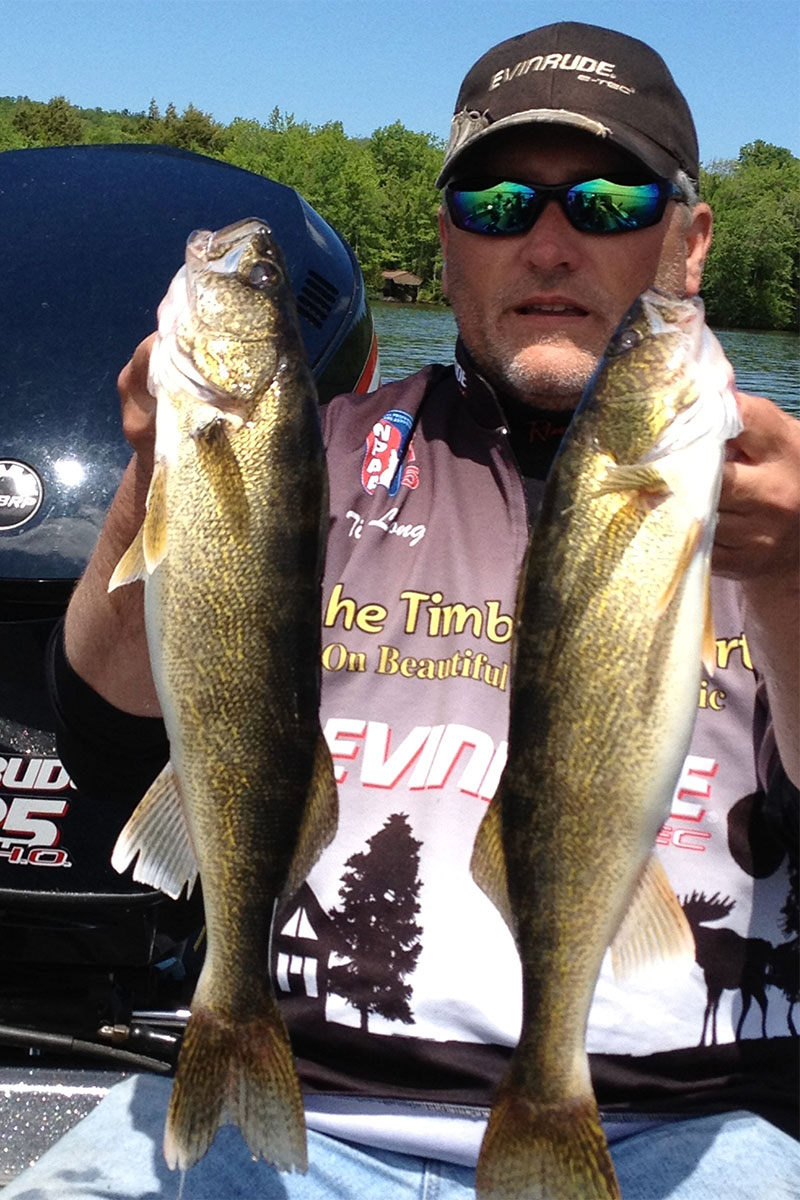 Tim Long, who with wife Sarah owns the Timbers Resort at the lake’s north end, will take you walleye fishing for these beauties. 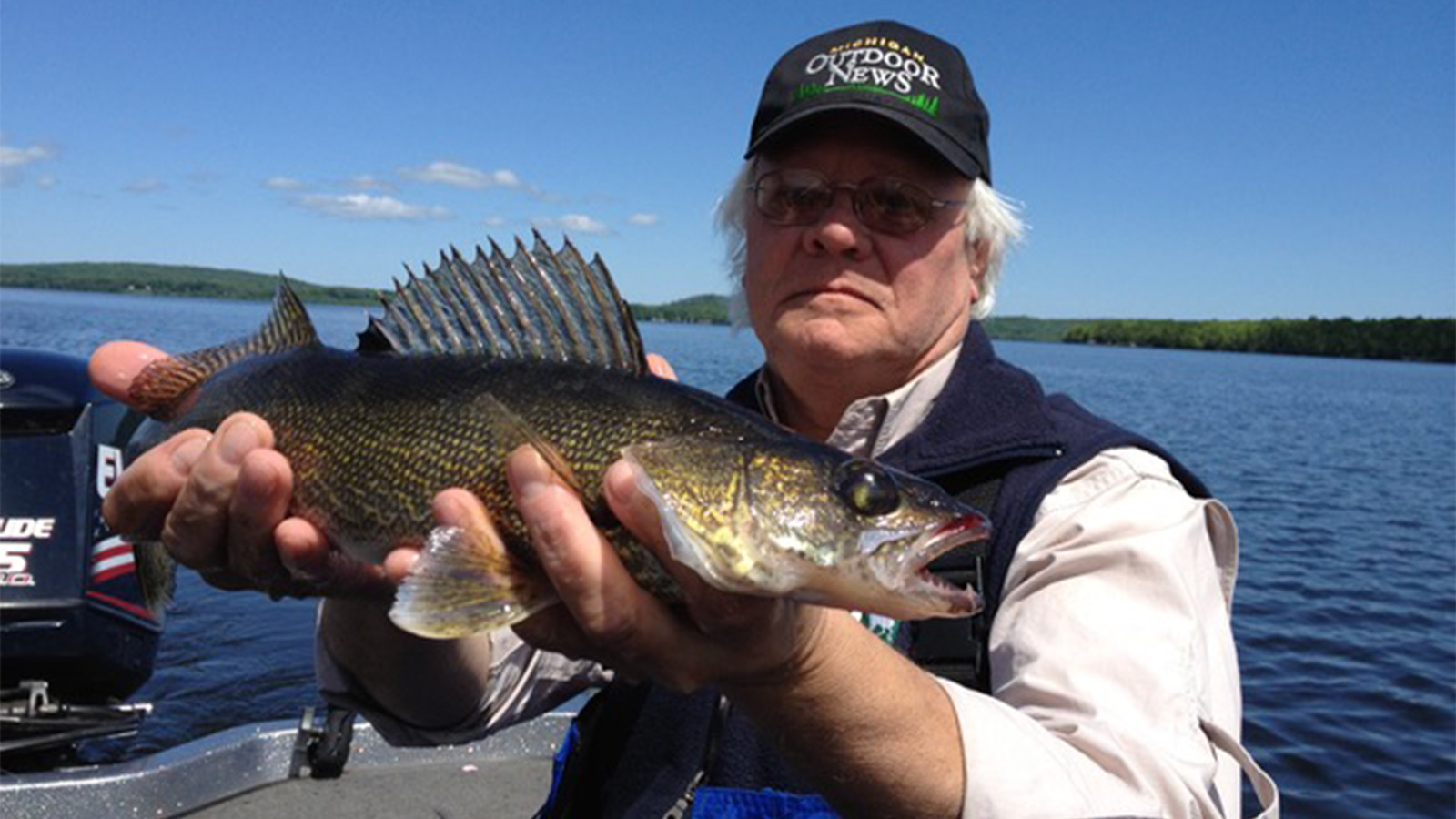 Another Gogebic walleye. Note the dark color due to the lake’s natural, tree-produced tannins.

Charter a fishing trip at nearby Timbers Resort, which also has a tiny rustic camp area. Three great lakeside places for eats: The Root Cellar and Gogebic Lodge. Or for fun, you can sit on the westernmost bar stool in the eastern time zone at the Hoop N Holler. Maybe you can even talk them into whipping up a batch of sea salt wings, most of the time served only in winter.

Continue on U.S. 2 towards Iron River, where one of the peninsula’s best-rated trout streams flows. Next door is Caspian, the near-ghost mining town that’s home to the Iron County Historical Museum, detailing the history of the area, and the former Caspian Mine, which gave up more than 6.6 million tons of iron ore during its life.

Continue east through lake country past scores of inviting resorts and Native American burial ground near the campground at Pentoga Park next to Chicagoan Lake, or travel on to Bewabic State Park near Crystal Falls. Now leave US 2 for my favorite little area cutoff jaunt. Take M-69, a curvy two-lane that meanders past even more lakes, resorts, and forest campgrounds. Or, you can either detour via M-95 to Iron Mountain and take a trip into the old Iron Mountain Iron Mine, which has been an attraction here for more than 60 years. Look at a paper map and you’ll see. We’ll continue on M-69 before curving towards Escanaba and northern Lake Michigan, and rejoining U.S. 2 eastbound. You’re now along Lake Michigan. Escanaba is home to a unique restaurant, Swedish Pantry, and you owe it to stop for special thin pancakes and baked goods.

You’re on the way back now to Manistique, where you can now access the first two parts of this road trip saga to plan your circle tour of Da U.P. You can bet that Denise and I will be here again soon in our 2015.5 Unity MB, ‘Lucky Us’. See you on our next adventure, and watch out for those darn Yooperland Border Patrollers! 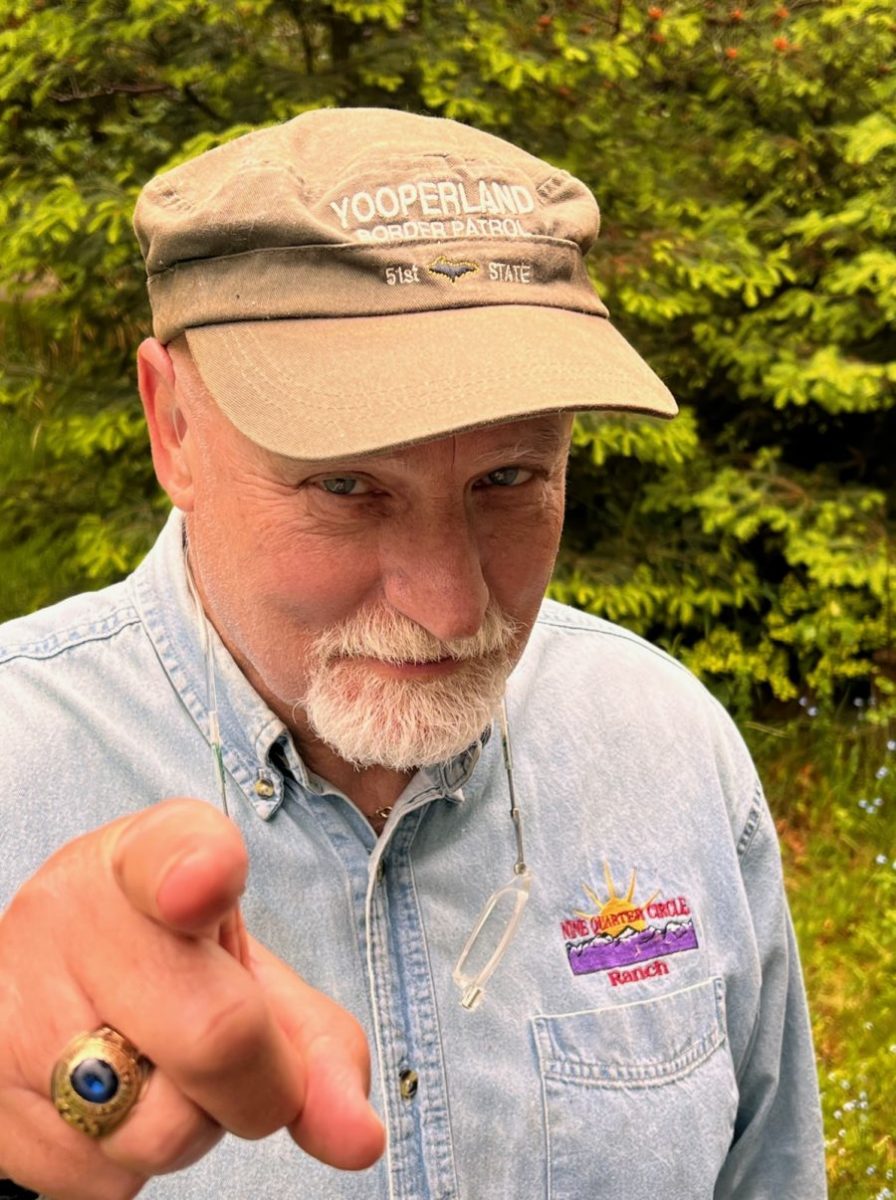 Michigan-based Leisure Explorers Bill and Denise Semion use more than 75 years of combined writing and photography experience to bring you along on their adventures across the U.S. and Canada in their 2015.5 Unity MB. Their cat, Sadie, joined them on their journeys, and now newcomer Molly will be tagging along. Bill is an award-winning travel/outdoor writer and author of two travel books. Denise is an accomplished photographer and outdoor communicator.