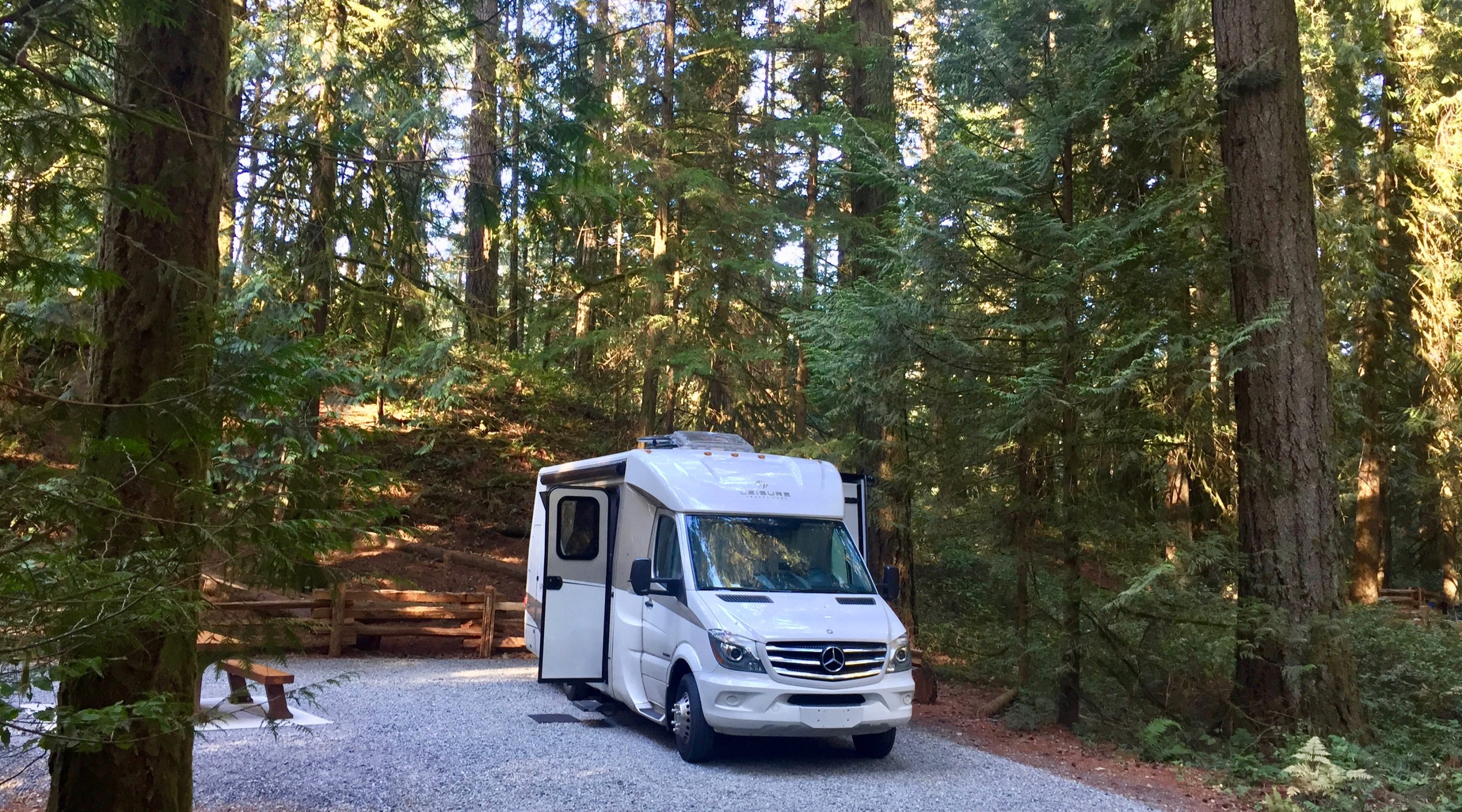 Half of the fun of taking a cross-country trip is the anticipation of reaching your destination. In this installment of our nine-week, 9,000 mile trip from Michigan to Vancouver Island, we finally arrive at our destination in “Lucky Us,” our 2015.5 Leisure Unity MB. In parts I – III of this series, we saw the Crown of the Continent, fished the Bow River, and explored the incredible Canadian Rockies, and now the island loomed ahead of us, just a few hundred miles and a ferry ride away.

We had already reached two major destinations along the way: Glacier National Park and the Canadian Rockies. In order to spend one extra day on Vancouver Island, we decided to make a scenic sacrifice by not traveling one of Canada’s most beautiful routes from Jasper National Park through Whistler and Blackcomb. Instead, we took a shorter drive from Jasper National Park to Vancouver Island, spending one night each at Lac Le Juene and Golden Ears Provincial Parks. From Golden Ears, we were poised to arrive at Vancouver’s Capilano Suspension Bridge Park right when it opened, so we could see its number one attraction before it became too crowded and in time to make our 3 p.m. ferry trip to the Island. 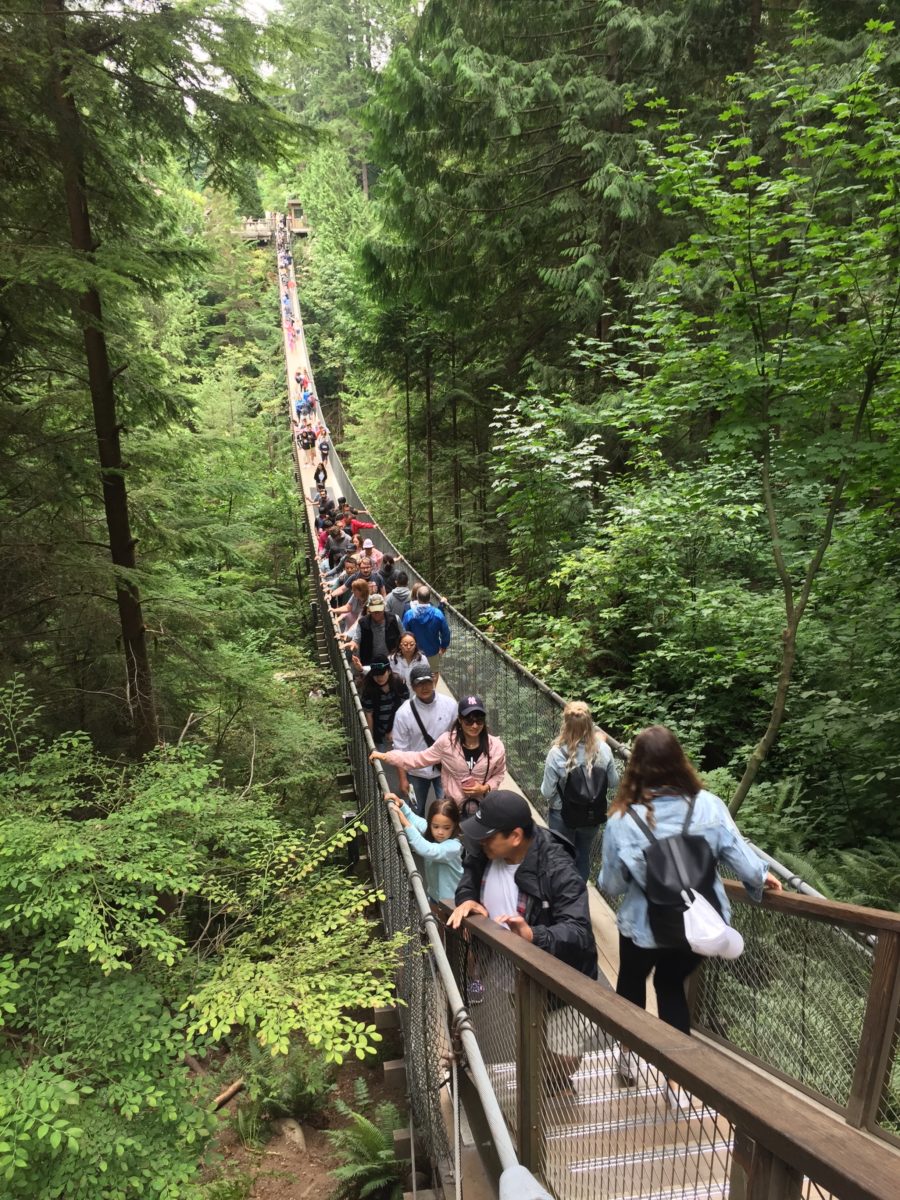 The Capilano Suspension Bridge takes you 230 feet (70 metres) above the Capilano River.

With only a partial day to see the sights in Vancouver, we chose to visit Capilano, a park I had visited about 10 years ago and looked forward to sharing with Bill. After walking the 450-foot (137-metre) suspension bridge, we explored Treetops Adventure, a series of steps, bridges, and walkways in the trees that gave us a view of what birds, squirrels, and other creatures see daily. We also explored Cliffwalk, a cantilevered walkway clinging to the granite cliff high above Capilano Canyon. 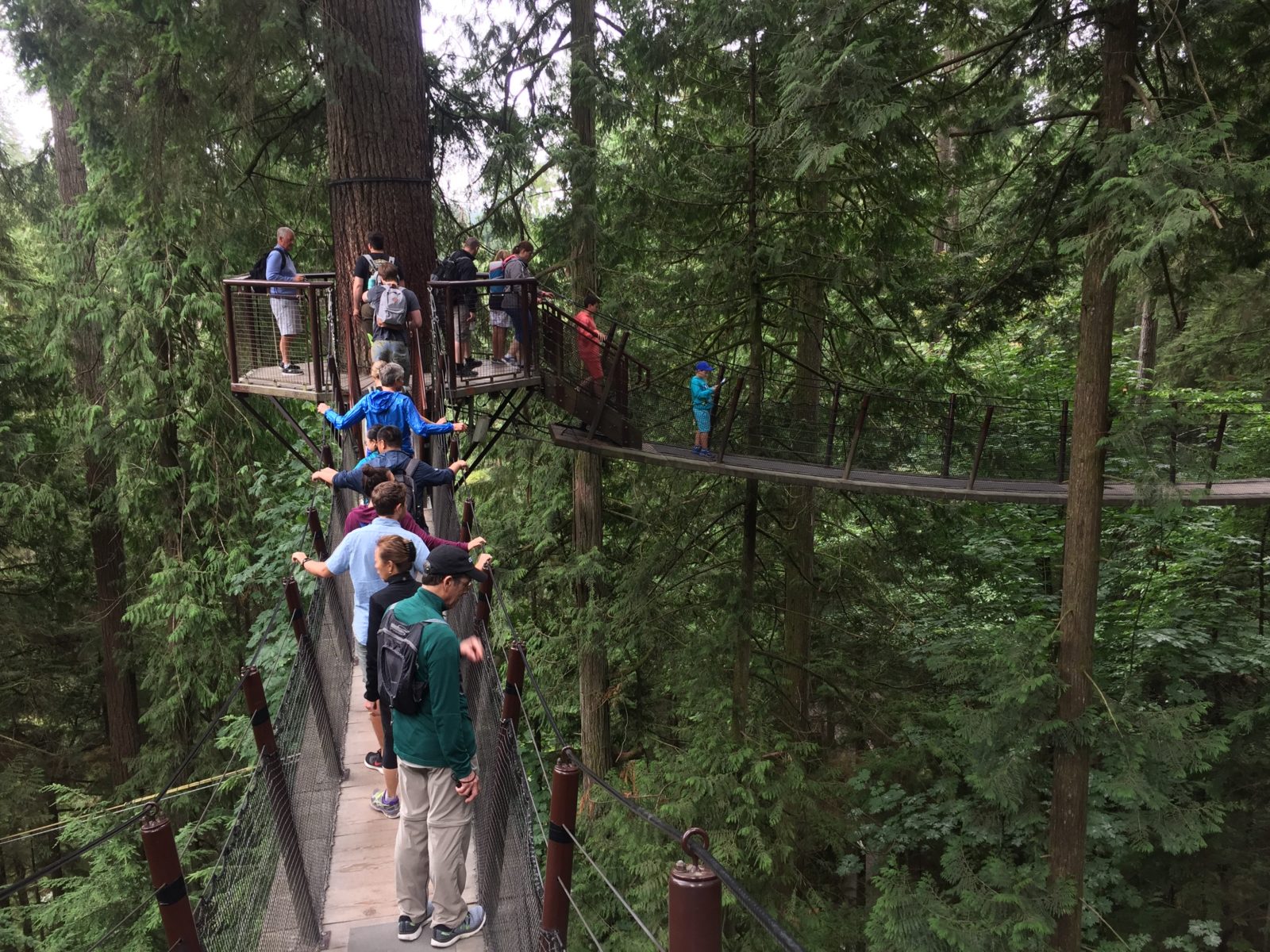 Treetops Adventure’s seven suspension bridges – up to 100 feet (30 metres) high in the evergreens – give you a different view of the forest.

From there, we were ready to get in line to board the BC Ferry; once we parked our RV among the semis and other large vehicles, we settled in for a 1.5-hour ride to Vancouver Island. Planners take note: the most direct and cheaper BC Ferry route (to Nanaimo) booked months in advance for vehicles our size, so we had to take a longer route from Tsawwassen to Swartz Bay. 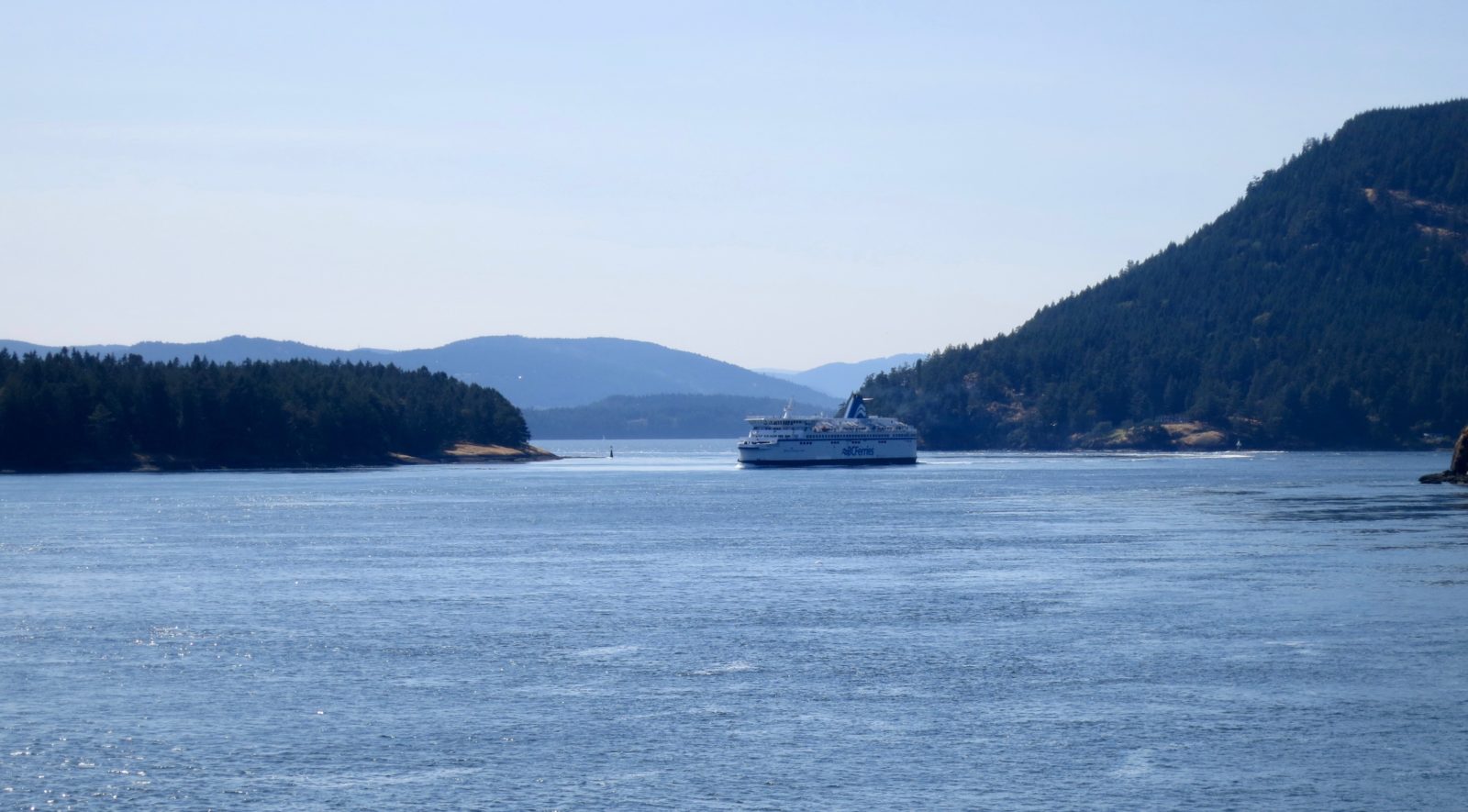 Once ashore, we had a two-hour drive to Rathtrevor Beach Provincial Park, another inconvenience of not being able to book the ferry to Nanaimo. We were aware of the Mill Bay Ferry crossing the harbor, and soon regretted not taking it. We were on a non-scenic highway, jammed with traffic, slowly negotiating our route. Once at Rathtrevor, we readied for the evening and the next day’s adventure to Tofino and the Pacific Rim National Park Reserve, the western-most point we would visit. 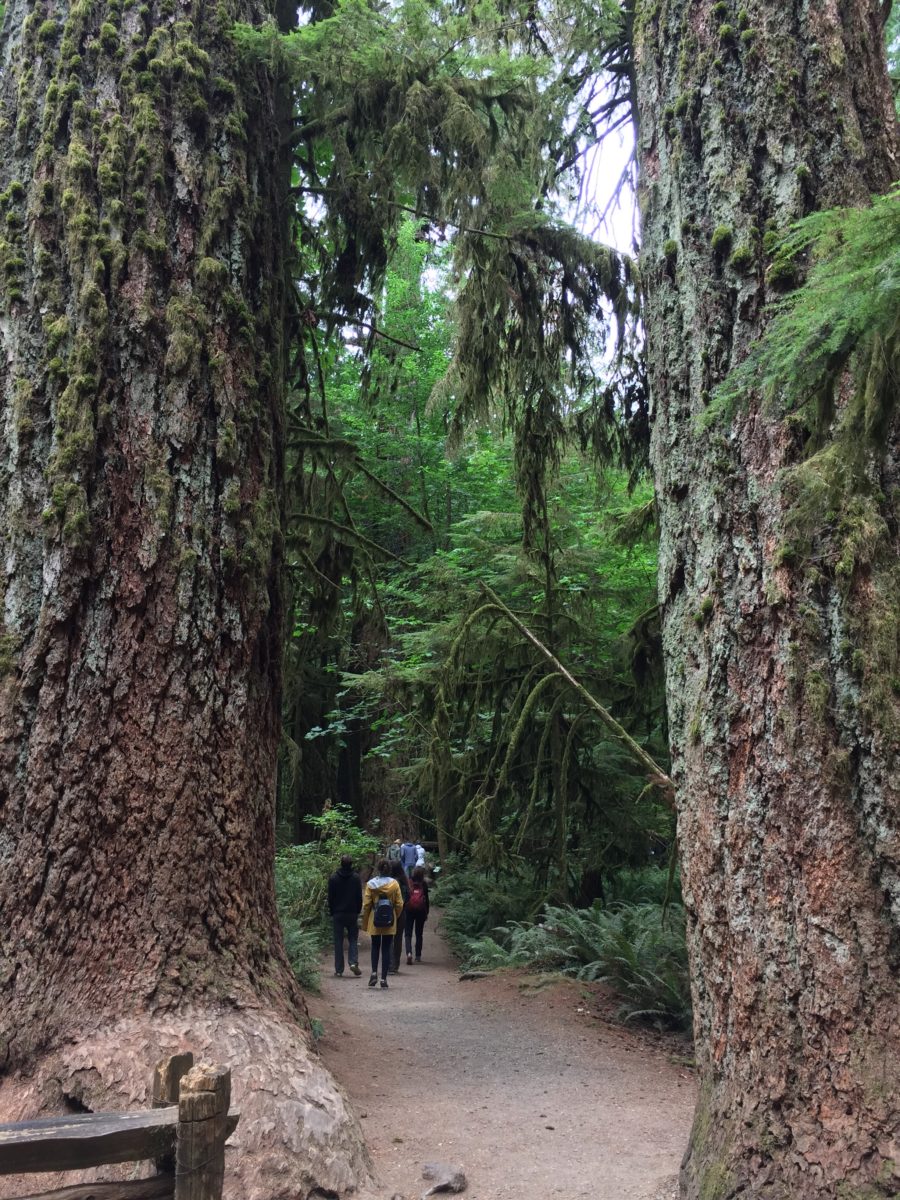 We heard about the road to Tofino about six months prior. Travelers told us it was a “must-do,” so we added two days to our itinerary to travel it. While on Vancouver Island’s “ultimate road trip,” we stopped to hike MacMillan Provincial Park’s famous Cathedral Grove, a 157-hectare stand of Douglas fir trees (including some that are more than 800 years old) which draws visitors from around the world. Afterward, we lunched at Port Alberni.

Once we reached the Pacific Coast, we spent two nights at the surprisingly nice Crystal Cove Beach Resort near Tofino and took in the sights, including hiking several trails in Pacific Rim National Park and touring the towns of Tofino and Ucluelet (pronounced You-Clue-Let), where commercial fishing boats brought their daily catch into the harbor. Although we could have stayed longer in this area, it was time to head back toward Victoria, the capital of British Columbia. 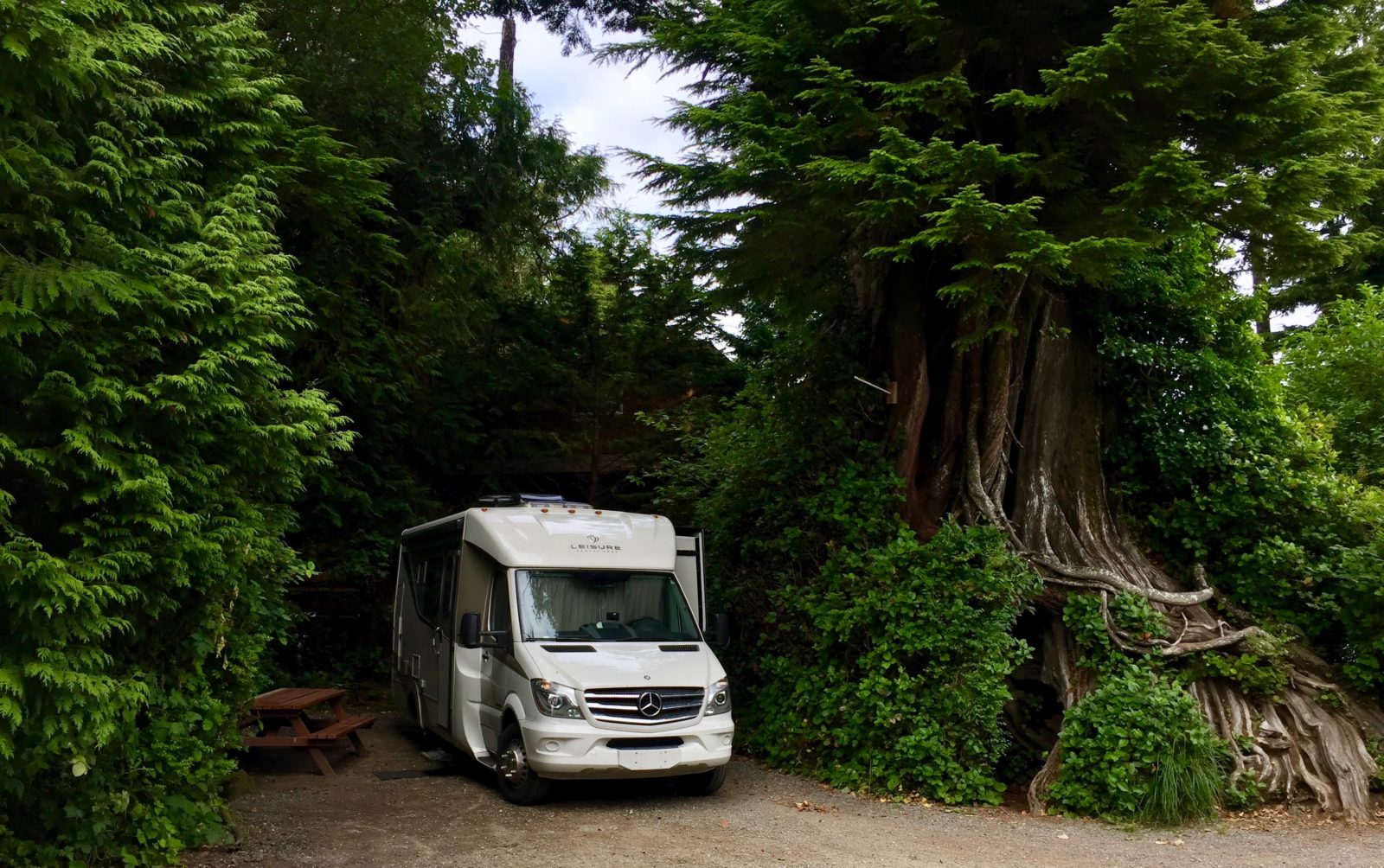 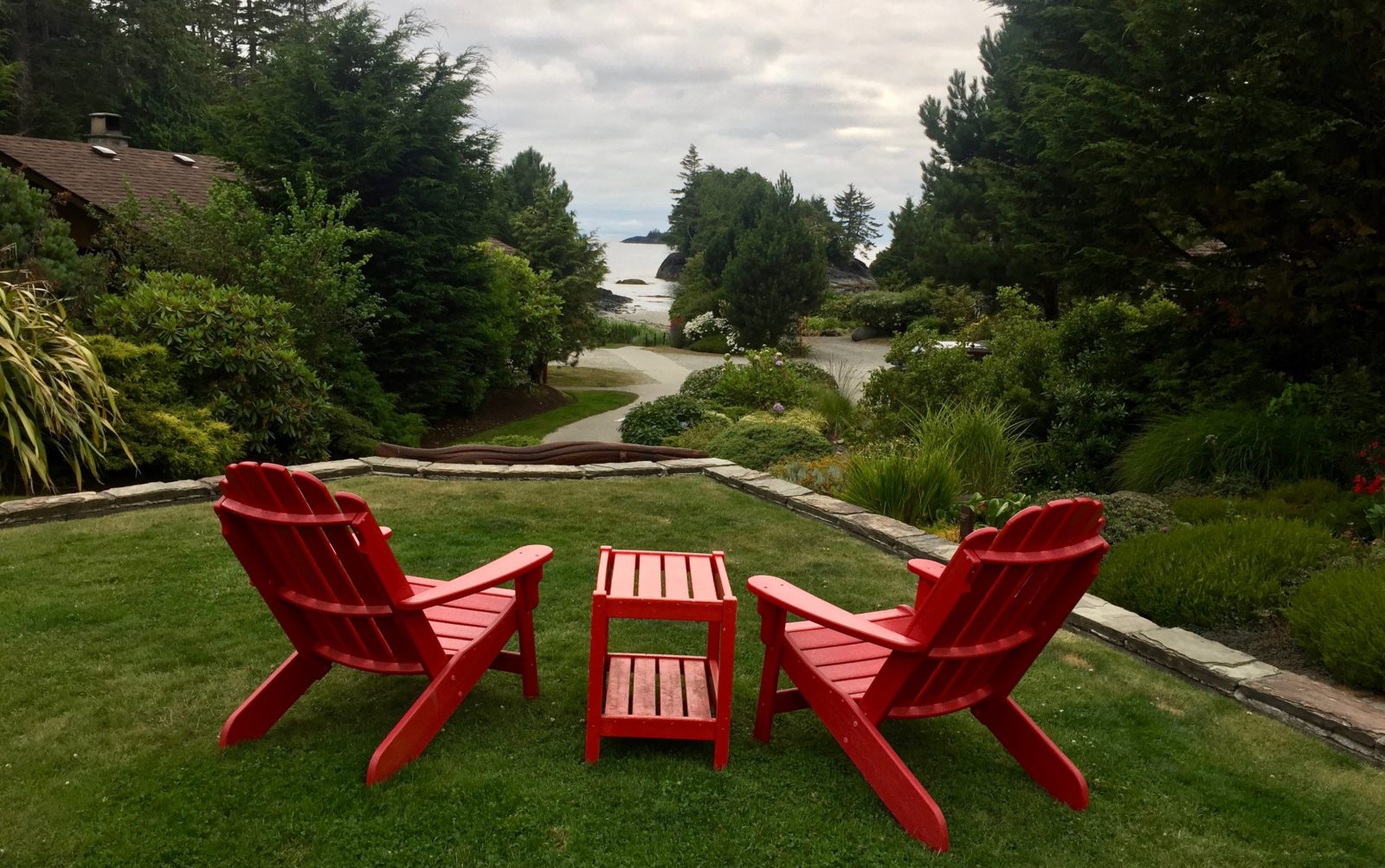 Our Crystal Cove campsite (left) was just a short walk to this ocean view (right). 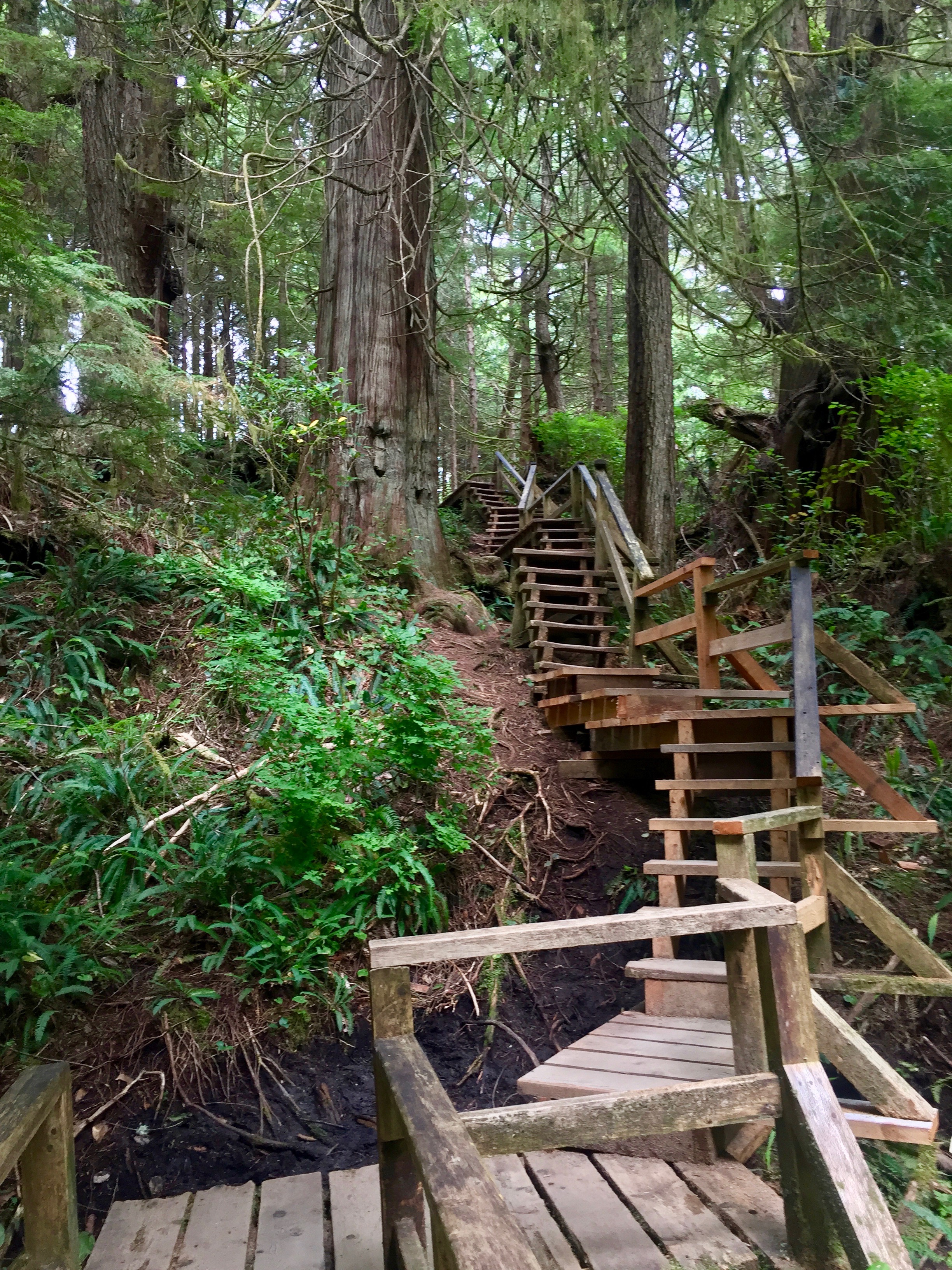 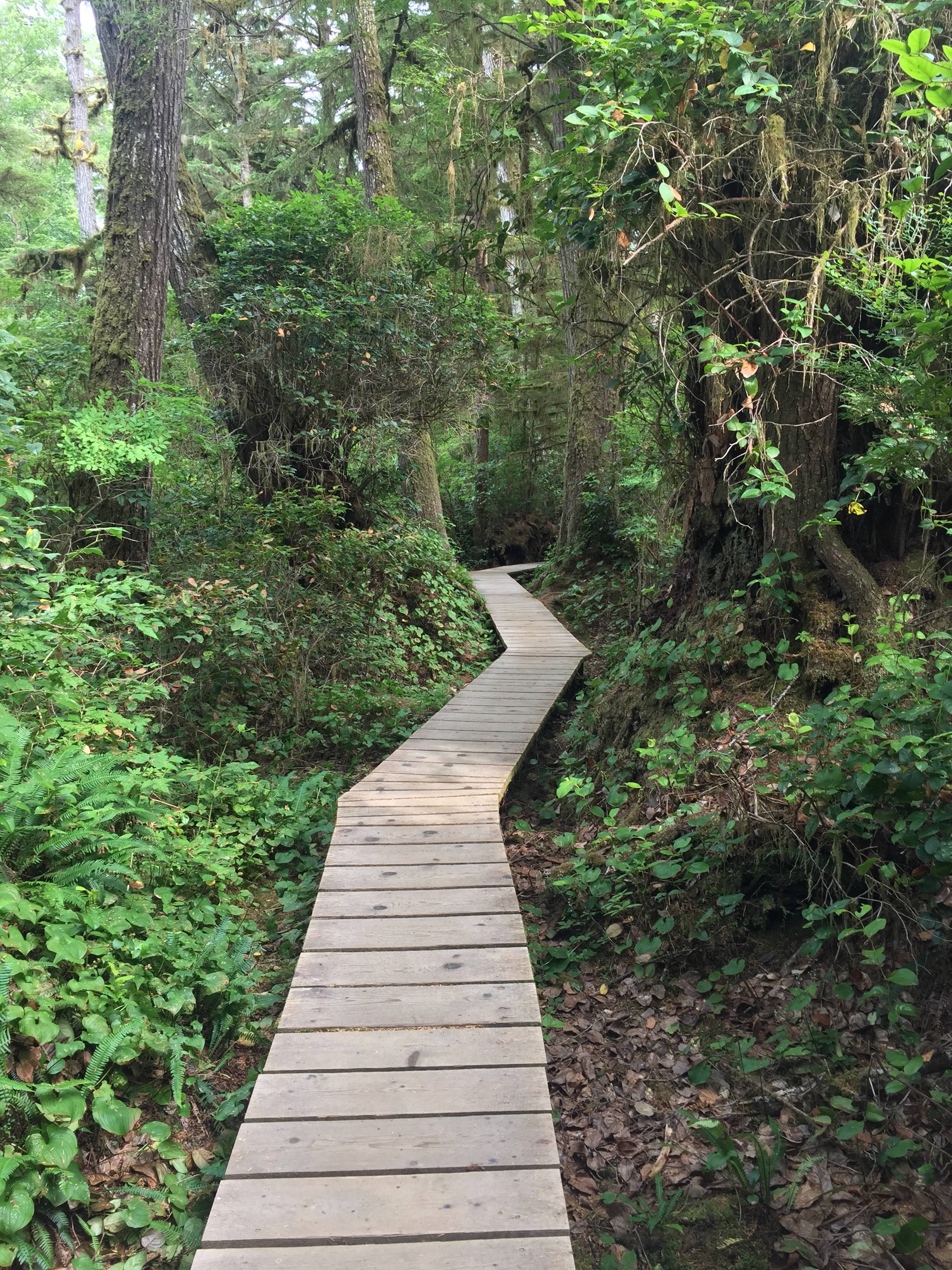 Hiking this trail brought us to the Pacific Coast view below. 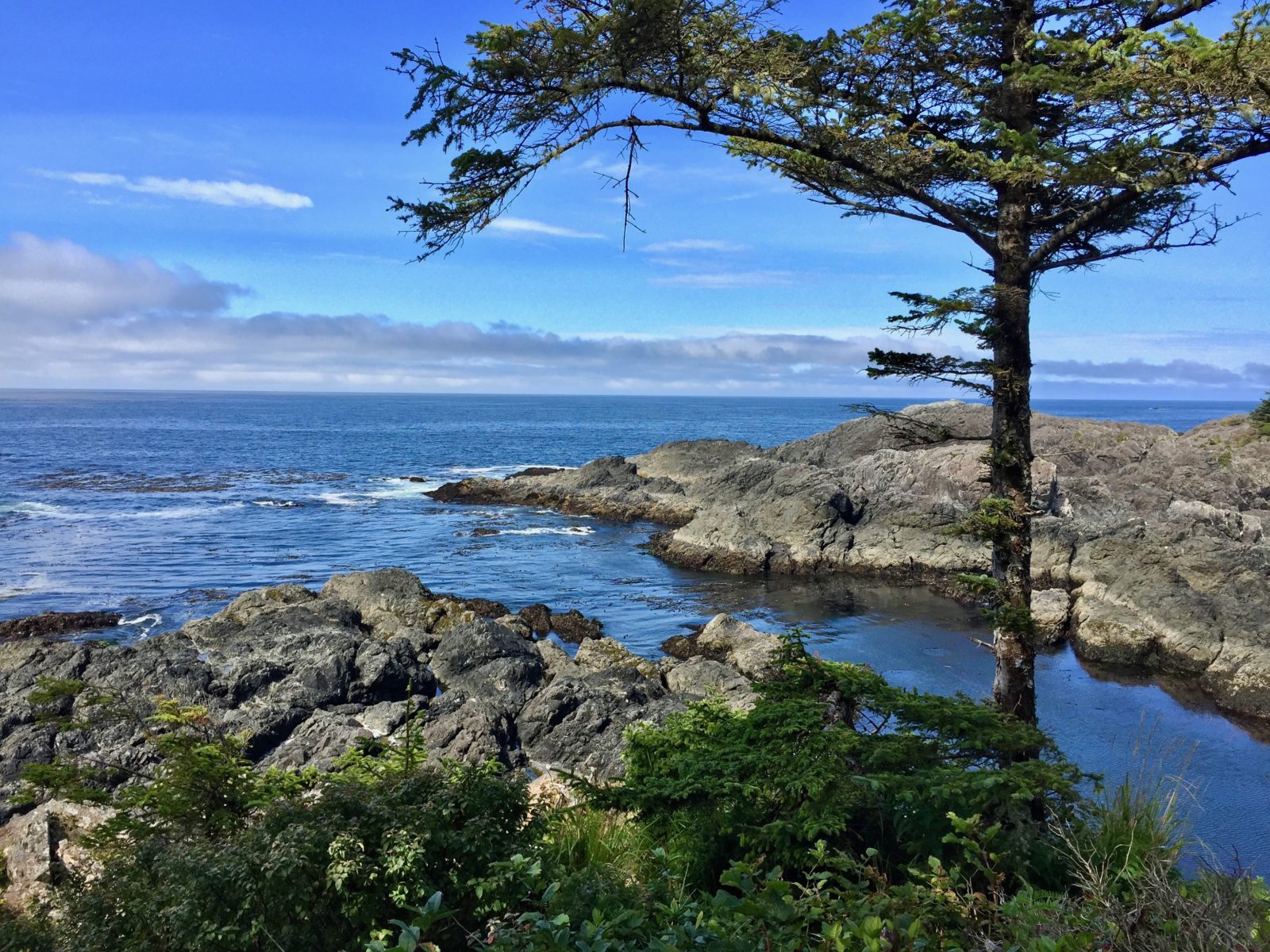 We found spectacular views of the coast along the Lighthouse Trail near Ucluelet.

Heading back across the island toward Victoria, we took the local Mill Bay Ferry, which easily brought our LTV aboard and dropped us close to Butchart Gardens. This privately-owned attraction was designed more than 100 years ago by Jennie Butchart, whose vision eventually became a National Historic Site. It features more than one million bedding plants with more than 900 varieties.

Knowing how popular this attraction is during the day, we opted to eat an early dinner and arrive in the late afternoon, which gave us better views of the spectacular landscaping and vegetation. As an added plus, we were treated to live music from the open-air stage, provided nightly in July and August. Still owned by the Butchart family, the property includes a rose garden and sunken garden, Japanese, Mediterranean, and Italian gardens, and a dahlia walk. 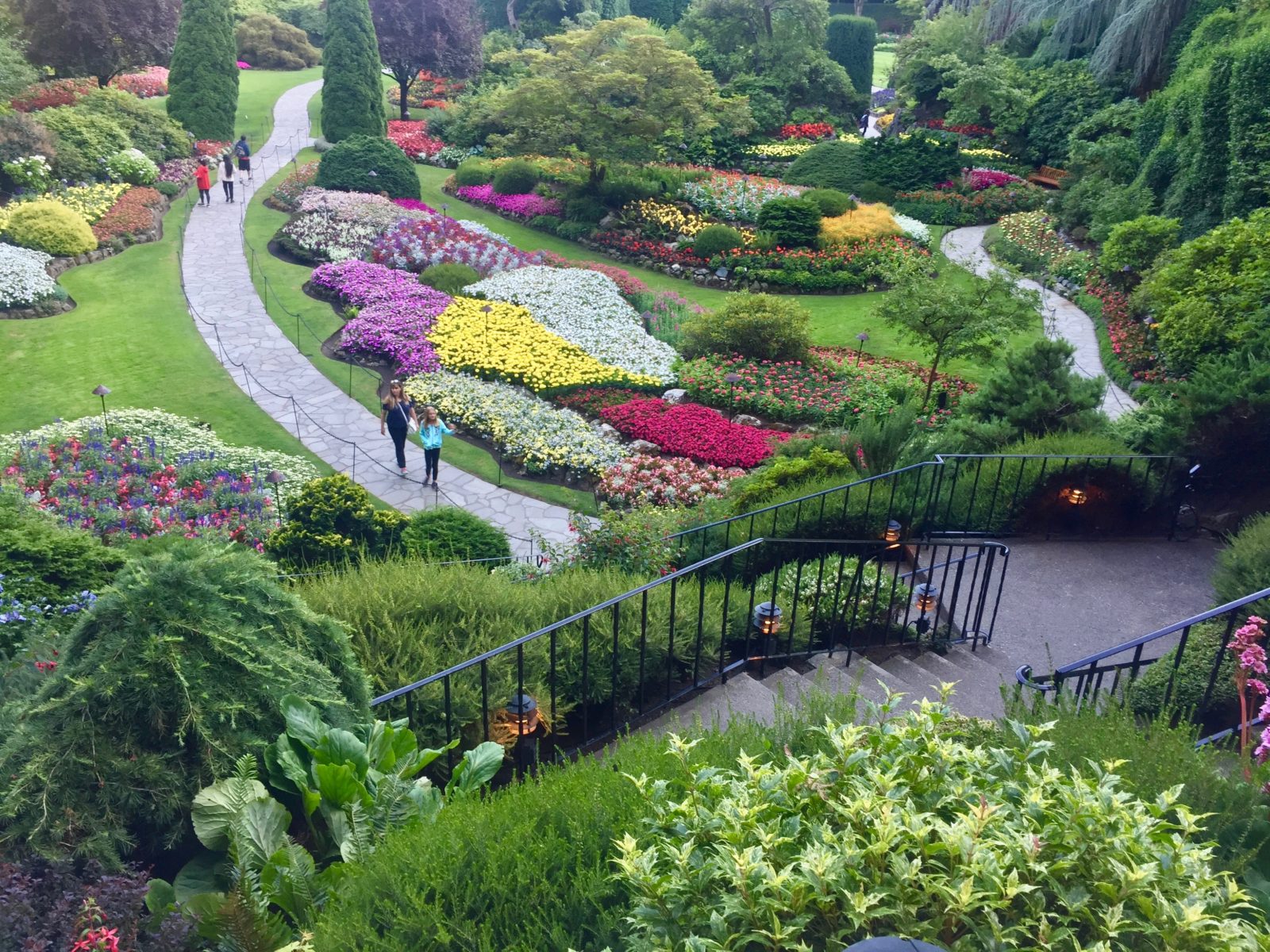 Built from a former limestone quarry, this sunken garden pops with color. 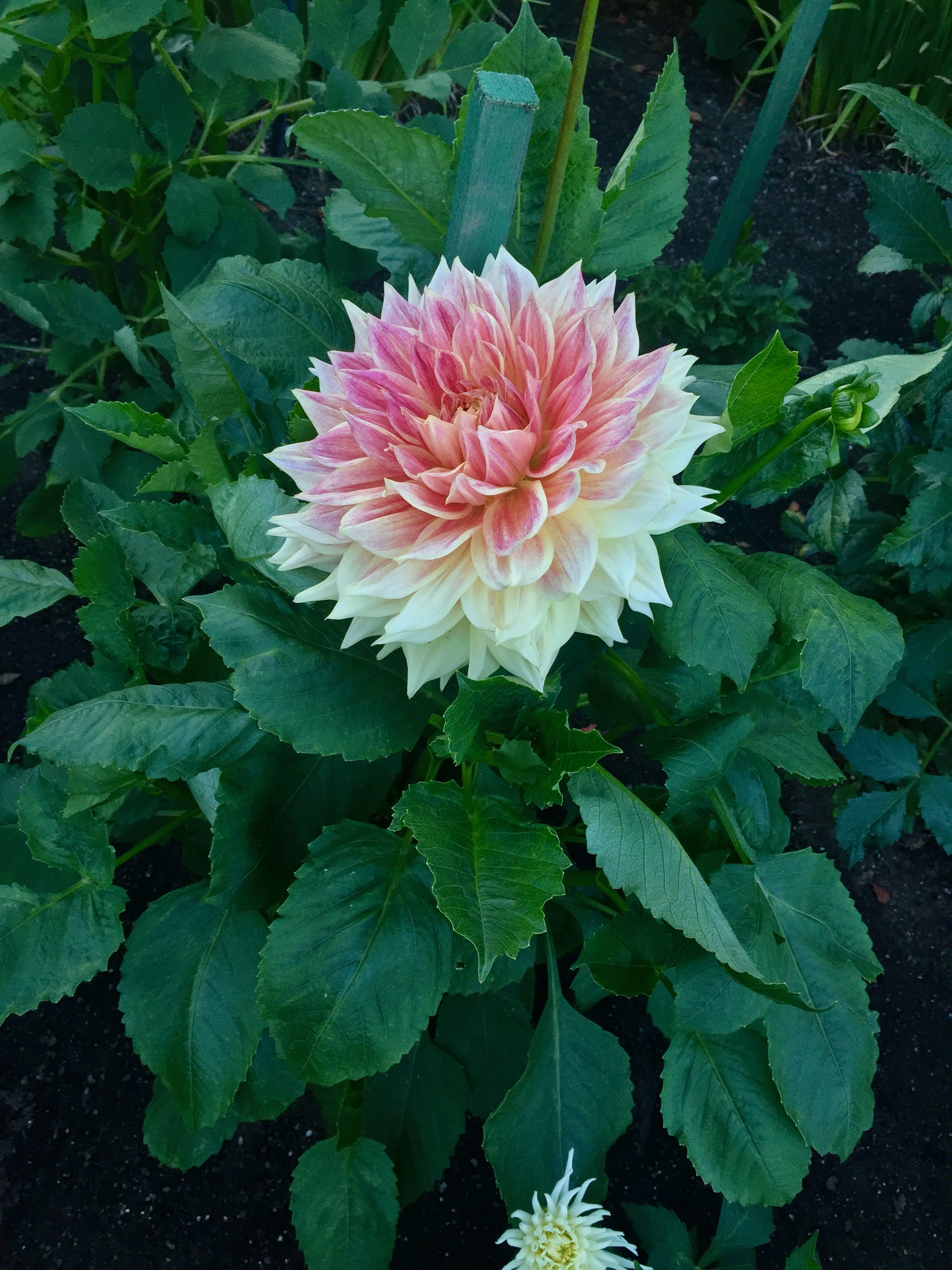 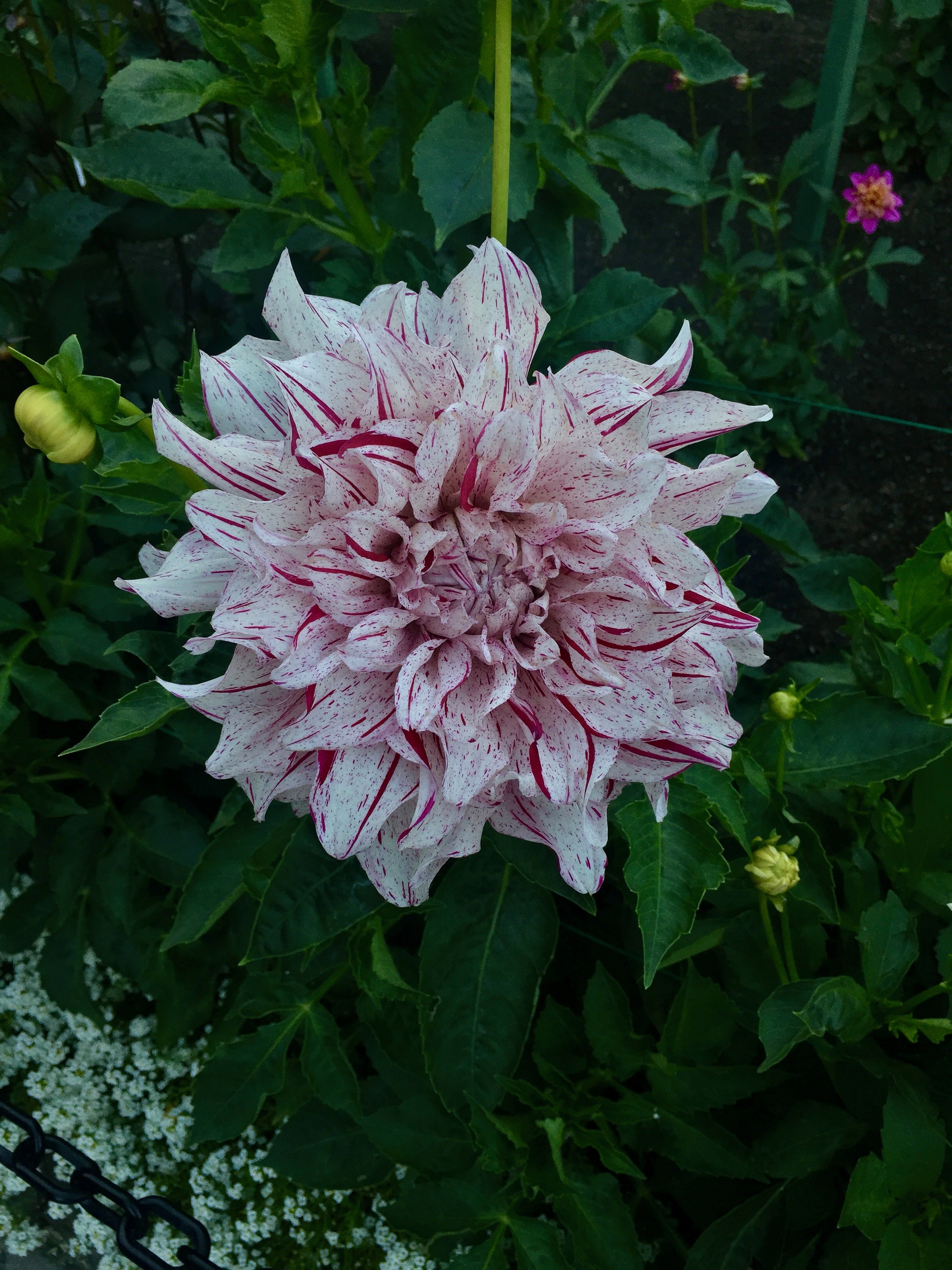 We chose to stay at Goldstream Provincial Park while visiting Victoria. One of the oldest cities in the Pacific Northwest, Victoria was settled by the British in 1843. Named after Queen Victoria, this city is rich with history, from the Empress Hotel, opened in 1908, to the Parliament Buildings, finished in 1897. The city’s Chinatown is the oldest in Canada and second-oldest in North America after San Francisco’s. 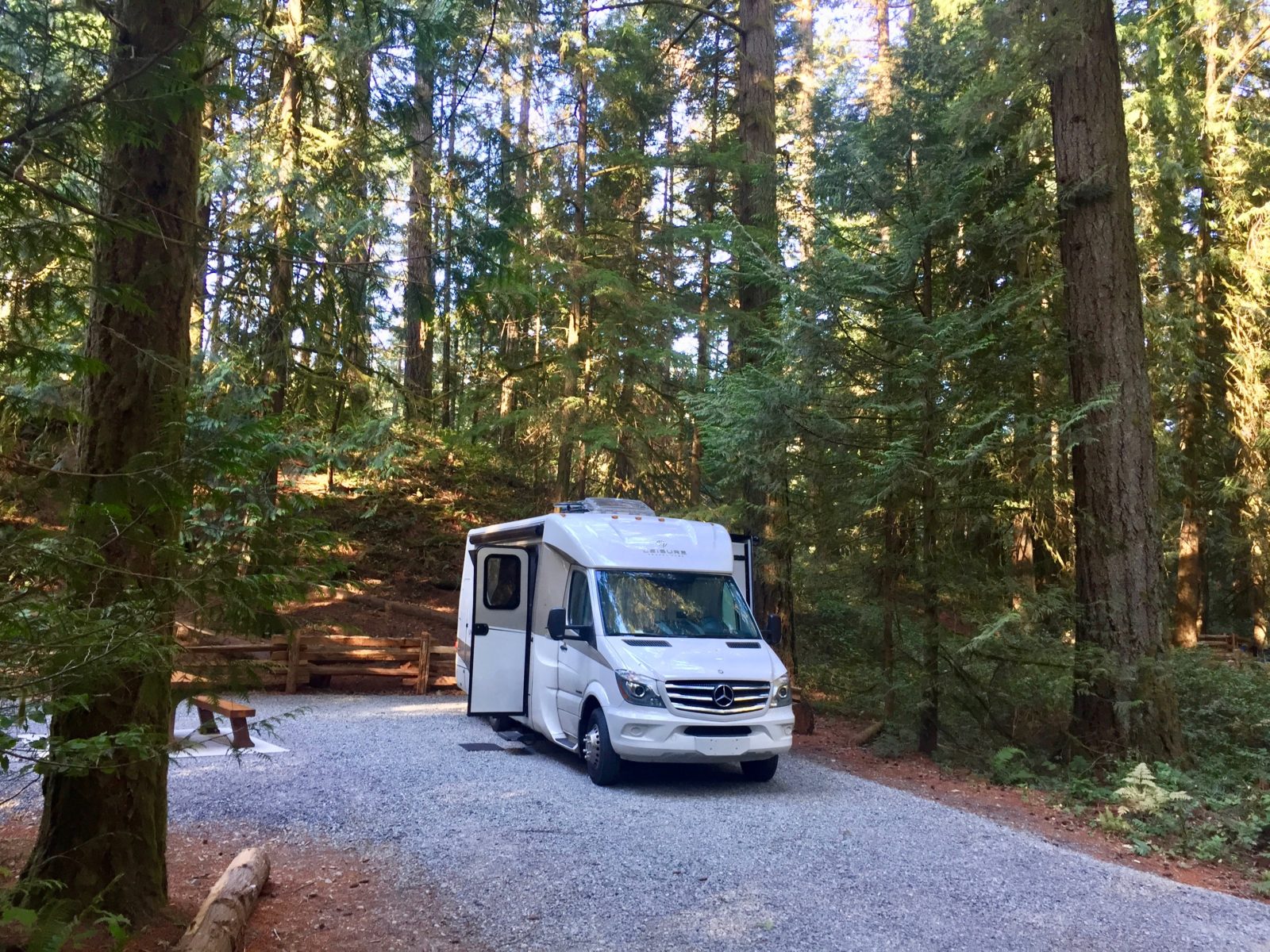 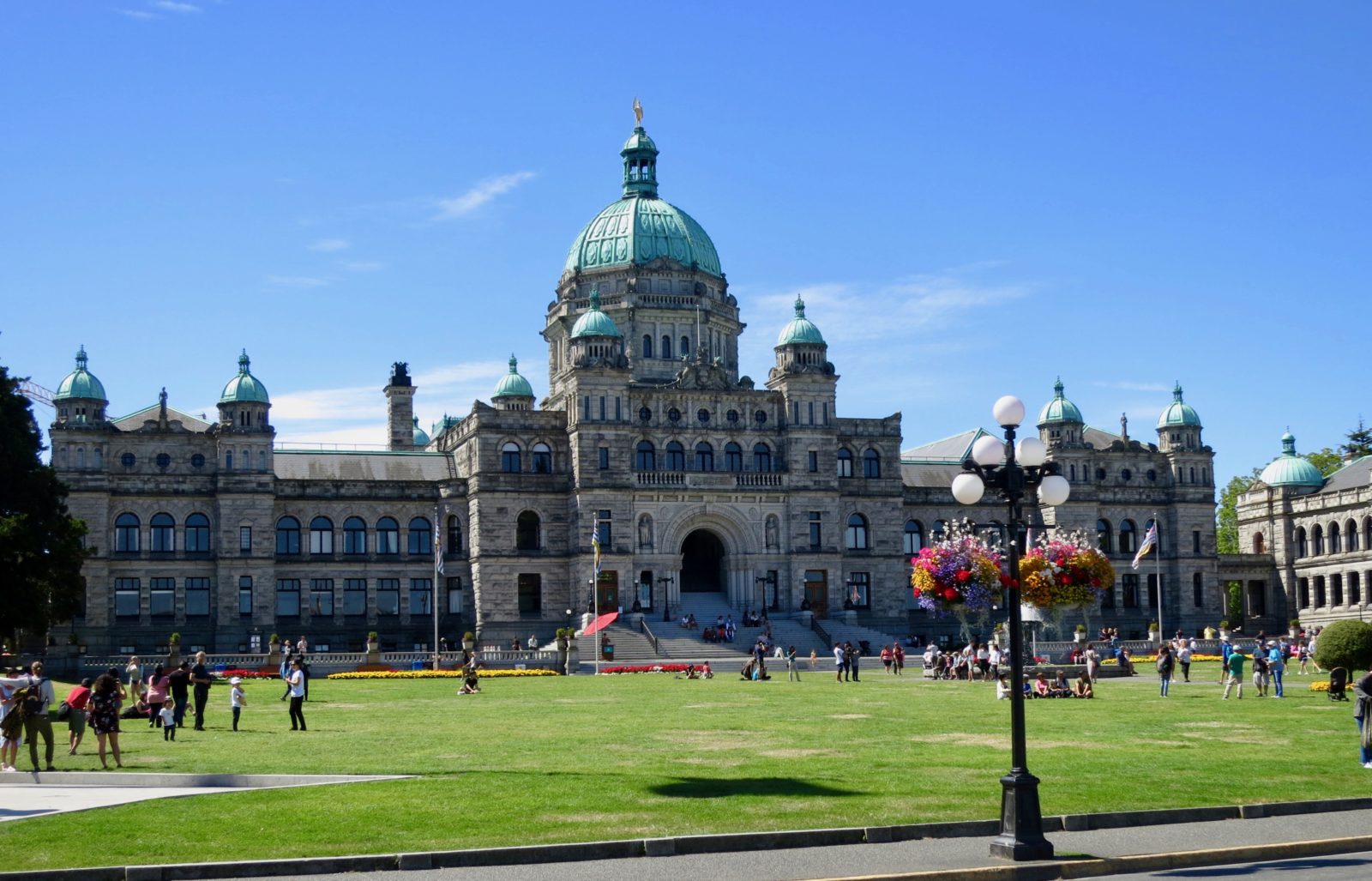 As the capital of British Colombia, Victoria boasts a grand Parliament Building. 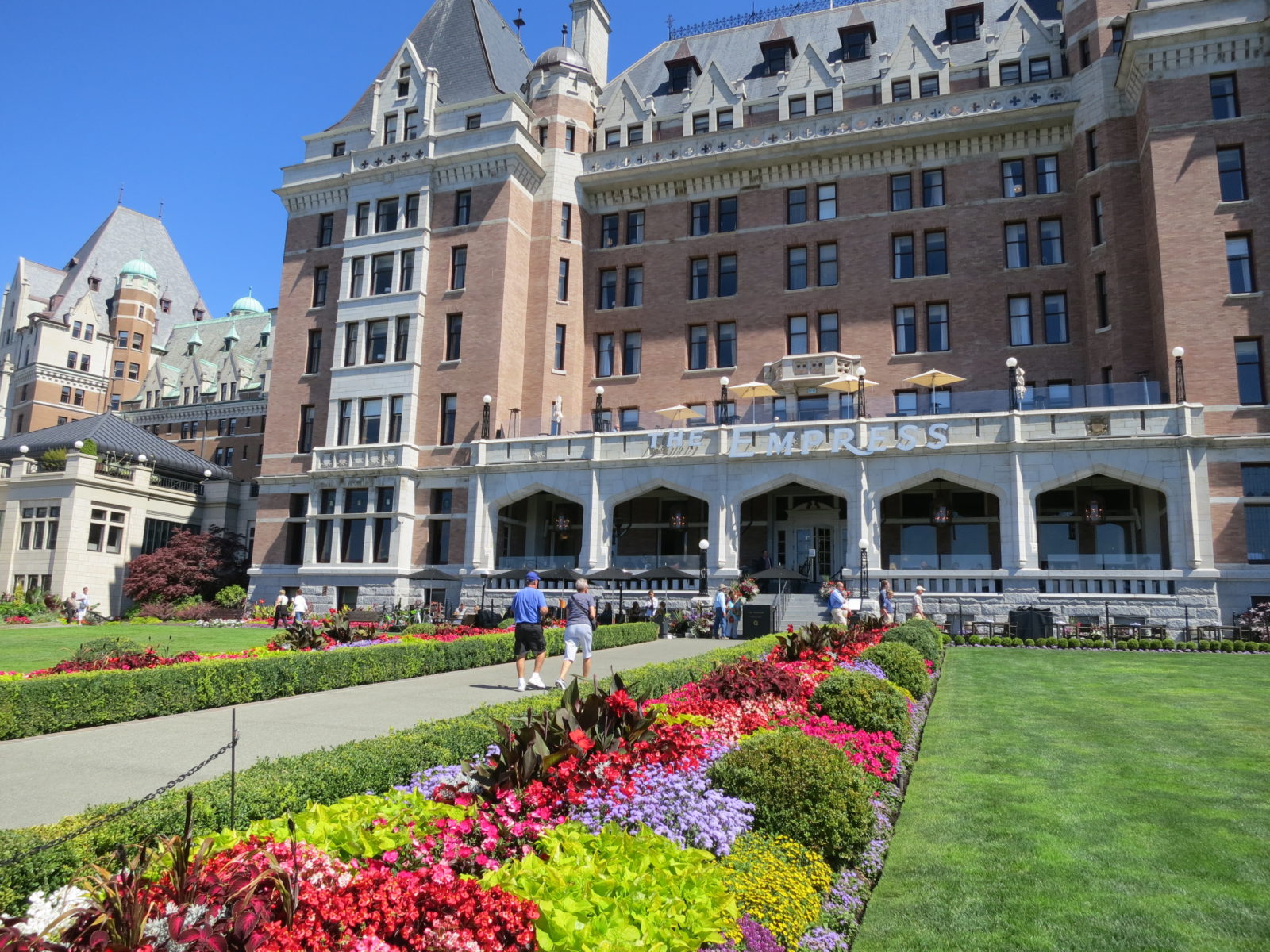 The Empress Hotel faces the harbor. 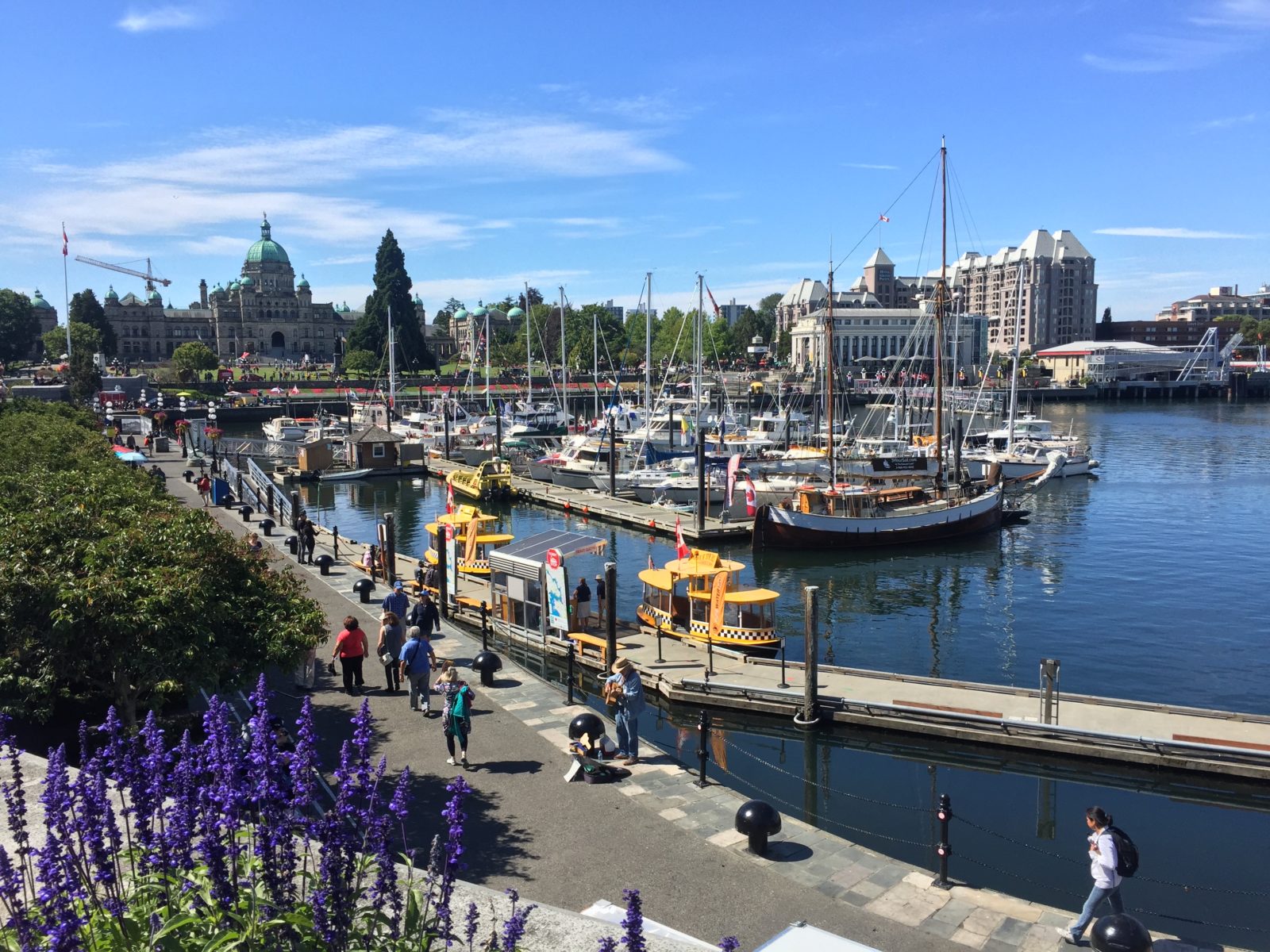 Victoria’s Inner Harbor is known as one of the most beautiful harbors in the world. Water taxis provide quick transportation around the harbor.

To me, the harbor is the heart of Victoria. From street vendors to a special holiday synchronized water taxi show, the harbor’s combination of boats, people, and music charms visitors and locals alike. The heart of the city is very walkable, and you can cut across the harbor in a water taxi. After taking an expensive land taxi ride to the water taxi, we later learned at the Visitor’s Center in Victoria that a much cheaper city bus route was available to take us back. 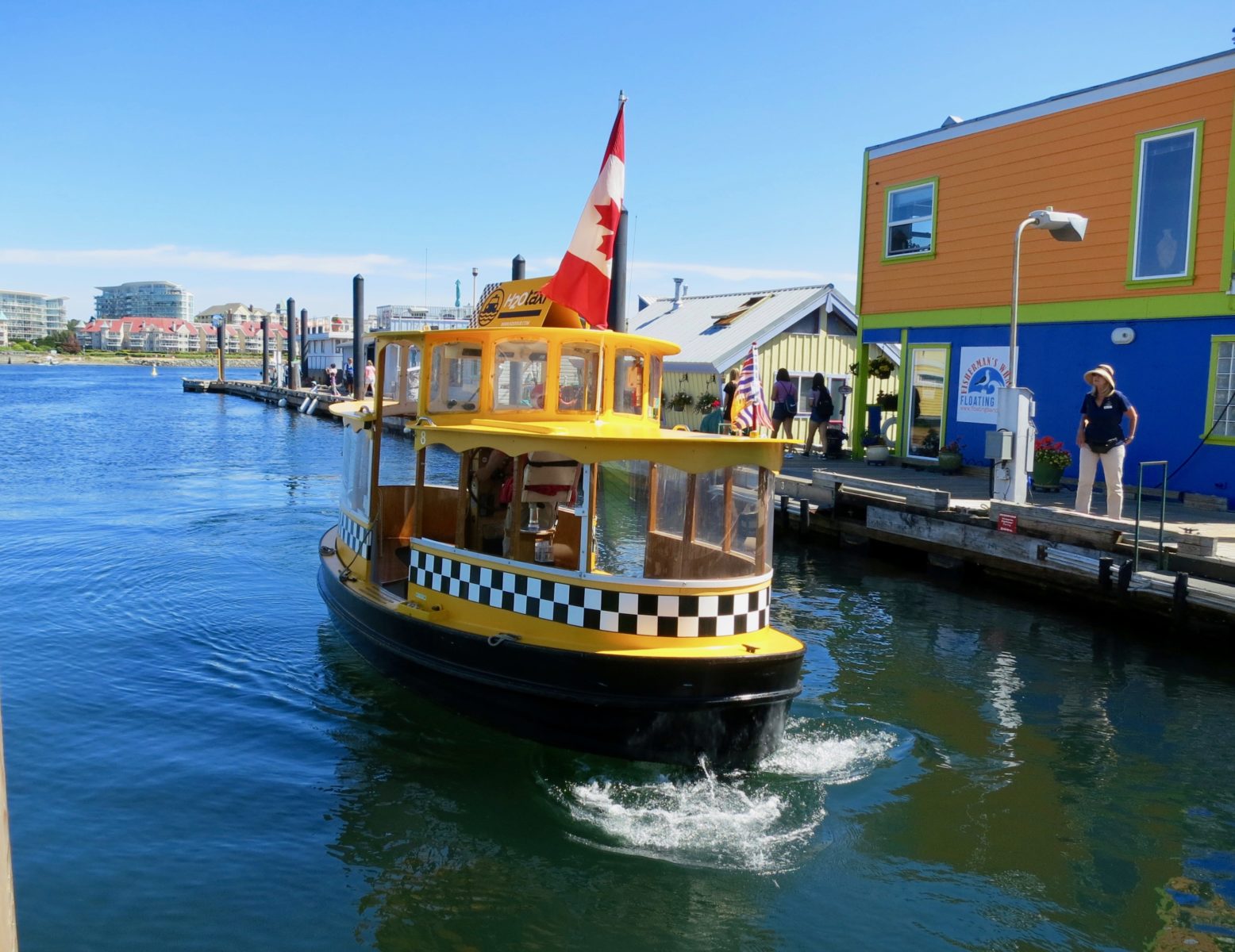 We took a water taxi to the Fisherman’s Wharf for lunch both days.

After spending five days and four nights on Vancouver Island, it was time to board the ferry and cross the border back to the United States, continuing our journey down the Pacific Coast through Washington, Oregon, and northern California. We’ll take you along on that stretch of our trip in the next installment of our series!

Book your campsites and ferry trip to Vancouver Island well in advance, especially if you are traveling during their busy season. Resources include Parks Canada and BC Ferries.