One Owner’s Perspective of the 2017 Annual Fall Rally

The caption on the Anna Magazine that we were given in our gift bags on Day One of the Leisure Travel Van Rally reads: “Make Every Day Special”. And that struck me as a great way to BE… to LIVE, oui? Especially these past few days, in the wake of so many Natural Disasters sweeping the planet, combined with today being Nine-Eleven.

This Spring, we were somewhere in one of the many islands that are the Bahamas, on our sailboat SV Banyan, when we noticed that it was the right date, although not the right time according to the clock that hung on our wall, to register for the Annual Leisure Travel Van Rally to be held in Winkler, Manitoba early September.

Last year we were too late in registering, and the Rally was Sold Out when we tried. We were disappointed as we had just picked up our Unity IB, which you can read about HERE.

“Did you still want to go?” asked Dave, as I prepped our coffee and he patiently waited for the registration screen to load. Patience is an asset without Fast and Furious WiFi at your Fingertips.

“Well, of course, but who knows where we are going to be in September” I replied, “but sure would be fun, wouldn’t it? And we could arrange our travel plans around those days, I’m sure.”

We watched the hands on the clock slowly Tick Tock their way ahead, and as we poured our second cup of java, the preset alarm beeped Time Time!! We logged in and quickly proceeded through the question boxes, one at a time, trying to be speedy and also desperately hoping and watching the irregular WiFi signal hoping we wouldn’t get disconnected, until finally and just in time the page loaded with a Thank You for Registering message.

We later came to learn that this year’s Rally had sold out in a record setting 20-30 minutes, whoa!

Fast forward to Today: The Day after the Rally.

And, as with all events in life, all we have left are our Memories. Read on as we share ours with you. 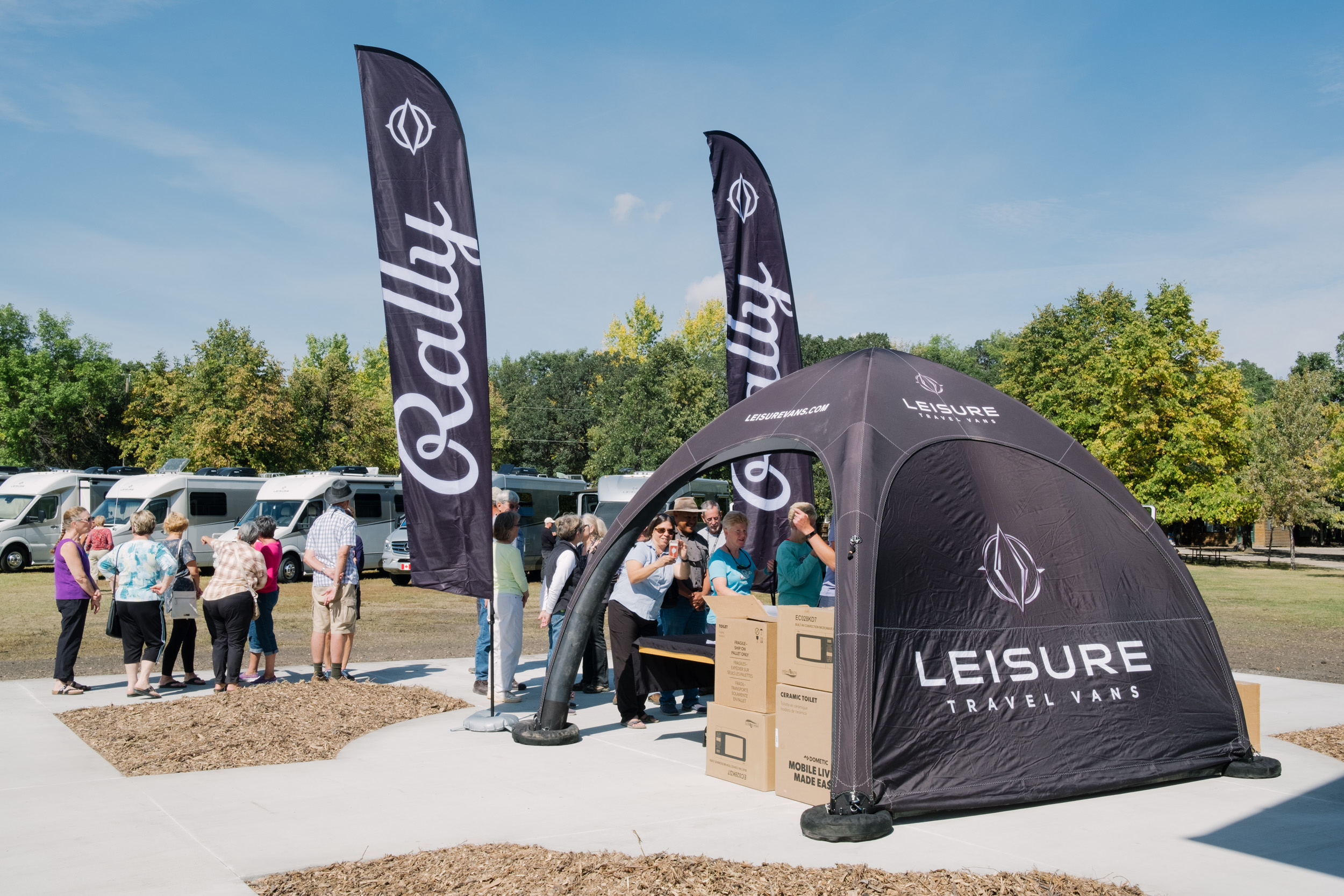 The Rally was held at the Winkler Bible Camp, just mere minutes out of the city of Winkler.

We arrived sometime after the designated noon o’clock start, and were greeted by Don. We chatted for a moment or three, and then he quickly affixed a large blue circle with the number 52 on our window as the line up behind us started to grow, as he said, “Just pull up ahead and wait there for the golf cart, he’ll guide you to your spot”.

Moments later, having followed the golf cart onto the large grassy field to our designated spot, we were soon backing in and then satisfied that we were level, and with enough space on both sides for incoming, we plugged into the power lines. The Bible Camp has a central water and dump accessible to all at the entrance, but we had dumped and filled up before our arrival, so we were ready to just Park’N’Play. All sites had access to electrical (approx eight amps) however we were asked to run fridges and hot water on propane, with no AC or heaters (unless you run your generators), please and thank you. This is a No Pets Camp, however a generous exception was made for the Rally as so many travel with their furry friends. We met some pretty awesome furry friends! 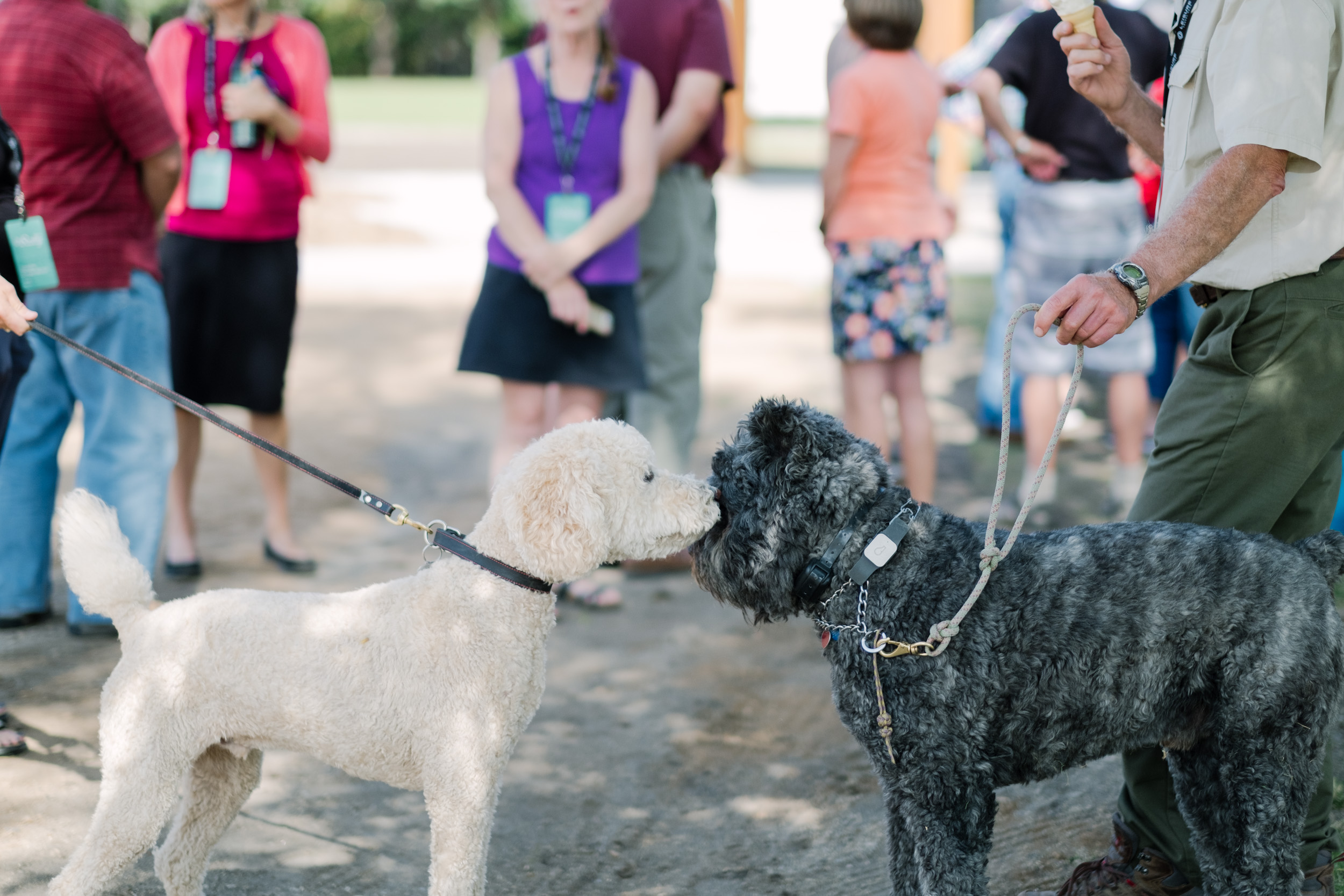 But the real pests were the swarms of hornets flying abuzz, not to mention the biting ladybugs!

The 80+ parking spots were slowly starting to fill up and pretty soon the many Units were lined all in a row, like soldiers standing at attention. 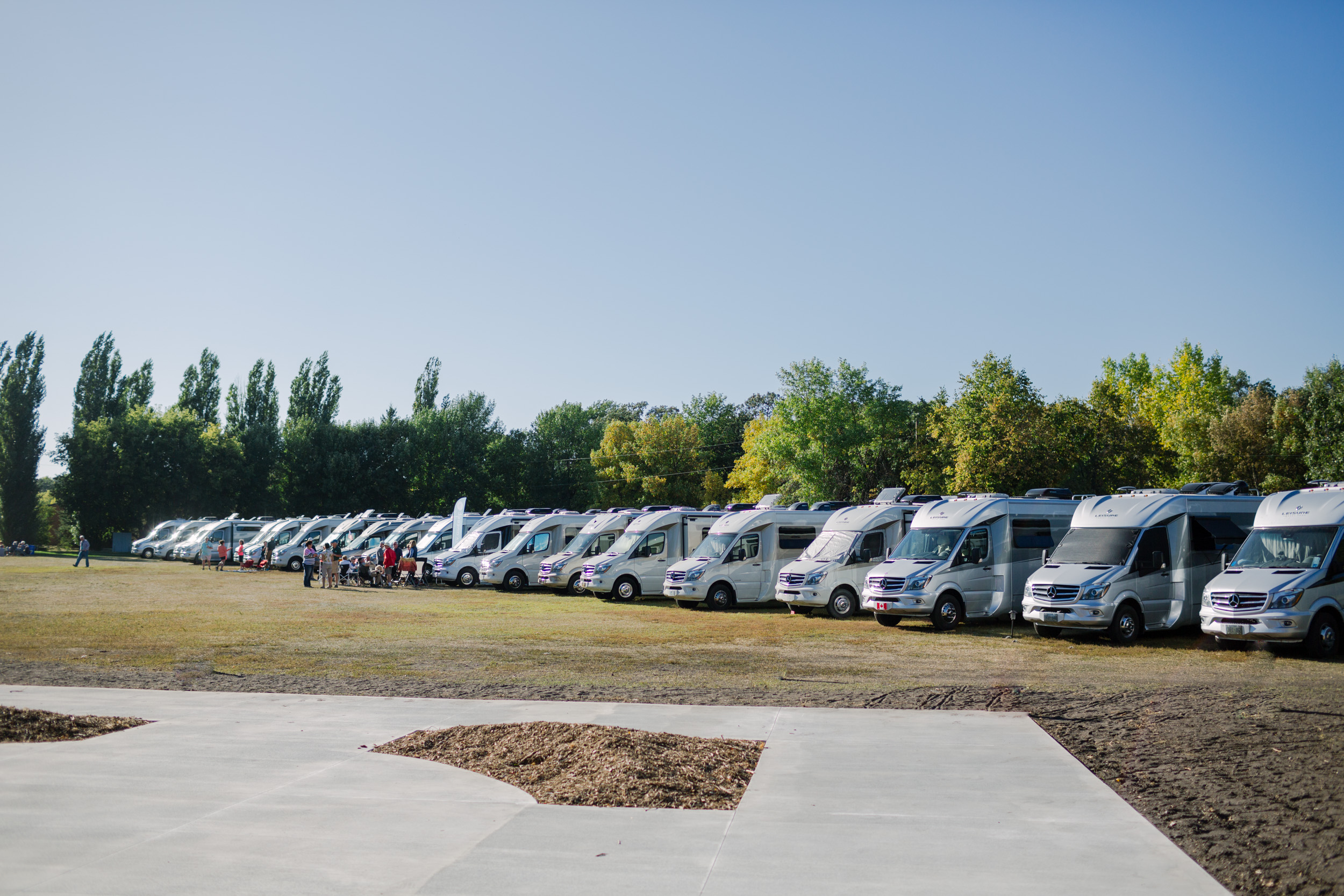 The energy and vibe was infectious as everyone, once settled and level and plugged in, gathered outside for introductory smiles and handshakes. We met some people who’d been coming for years and years, but most of the people were Newbies, just like us. We took a quick walk around and noticed a wide array of Provinces and States in the ‘hood. Nova Scotia was well represented with two of us parked side by side. And the best part of that walk? Hearing “Hey, are you Banyan?”

We turned with the largest grin every, and replied: “We Sure Are!”. It’s always a humbling moment to meet our followers and virtual friends, and it wasn’t long before we were friends For Real. Throughout the Rally, we were happy to have our “boat cards” with us, and it sure was an advantage to share those around as quick exchange of email or phone or social media details for later reference, or when memory fails, whichever comes first.

Registration time allowed for a mix and mingle type of lineup. It was a simultaneous exchange as we got our names crossed off the Attendee List, while at the same time being presented with green Rally Name Tags and a Gift Bag complete with Goodies. 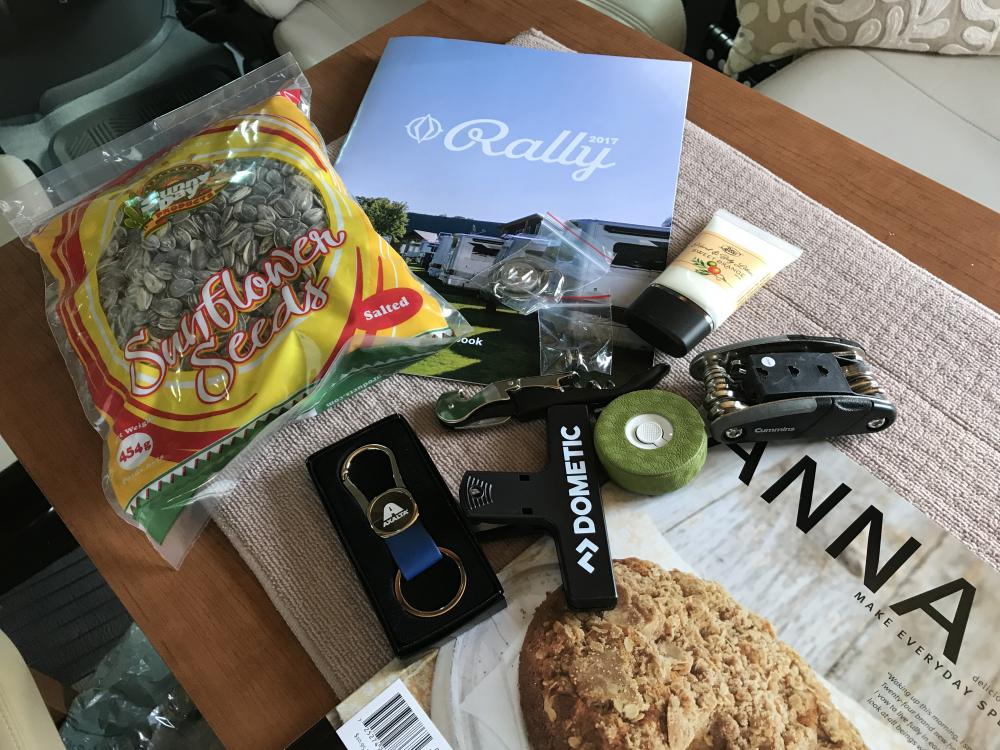 We barely had time to put all that away when it was time for ice cream from Charley B’s.

Catered us all to some of the best ice cream we’ve ever had. Standing in the shade, we chatted with many: there’s a reason they call it “Ice Cream Social” right? 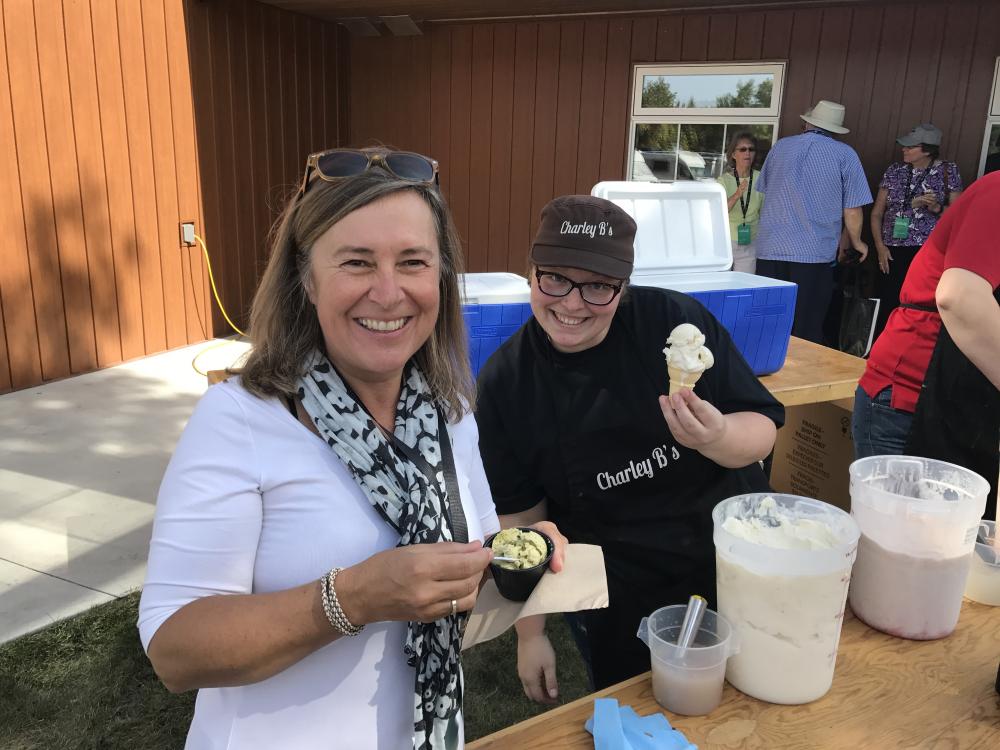 The Large Dining Hall at the Bible Camp is new, and it was truly spacious and gorgeous, with open views of all the LTVs parked outside. All tables were numbered, and you could pick your table and seats. We always try to never sit at the same table twice: it’s a practice that allows you to meet and mingle. And sometimes as hard as it is to do, we are all creatures of habit, after all, it is so rewarding to meet people from all walks of life! And don’t we all have great tales to share?

An introduction to the Rally, followed by a Blessing, followed by supper. The Rally fee of included all the meals for the duration. The tables were called up random number style for a cafeteria style servings. The food over the three days was tasty, with plenty of it, although perhaps it would have been nice to see a few more options for each meal for those with dietary restrictions, or just to have a choice. During our three days, we chatted with the lovely young’uns that were serving. They were smiling and kind with plenty stories about themselves, or the food they were serving, and when asked, due to our low-carbing it, were kind enough to double serve some portions when we omitted others. We also learned a lot about the Mennonite dishes that were offered up.

The end of Day One promised Bingo, but somehow, we missed it that evening as we were out and about mingling and meeting.

The Second Day was a Full On experience for many, and after breakfast everyone quickly dispersed to their respective locations or buses. Not only were there Factory Tours happening (wear running shoes!), but also on the list were Artisan Tours, and the start of a few days of back and forth as people were getting their vans serviced. For us, we had our MoHo serviced before the rally, so we’d signed up for the Mercedes-Benz Seminar, LTV Seminar, and the Dometic Seminar. Our head was spinning after all that! 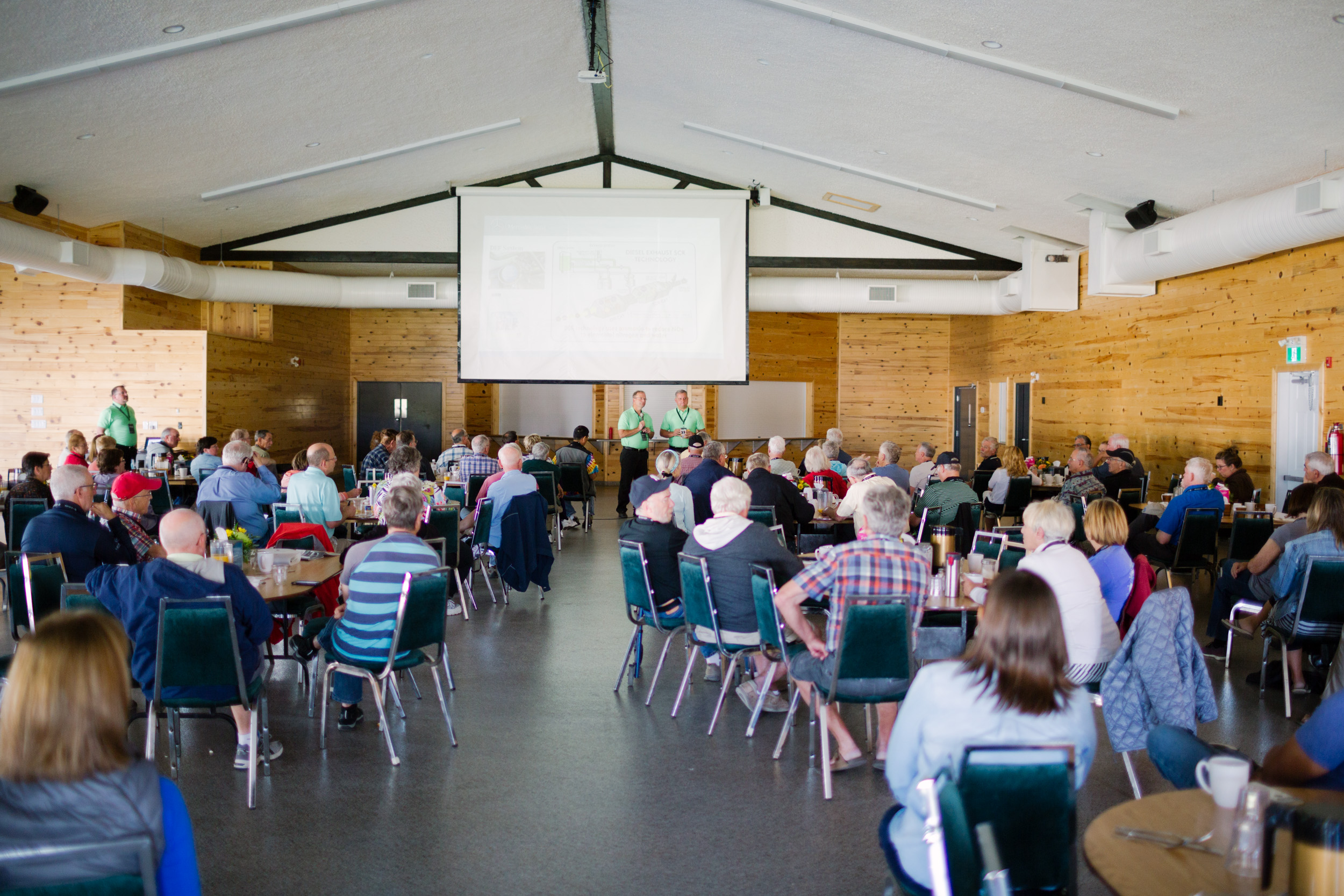 There was a scheduled Group Photo Shoot just before Lunch, some drone flying happening instead of an afternoon siesta, and just as the hunger pangs were starting to hit, the call to supper. The Beach Mingle that evening allowed for some good ole fashioned S’mores over the campfire, listen to the music playing softly in the background. 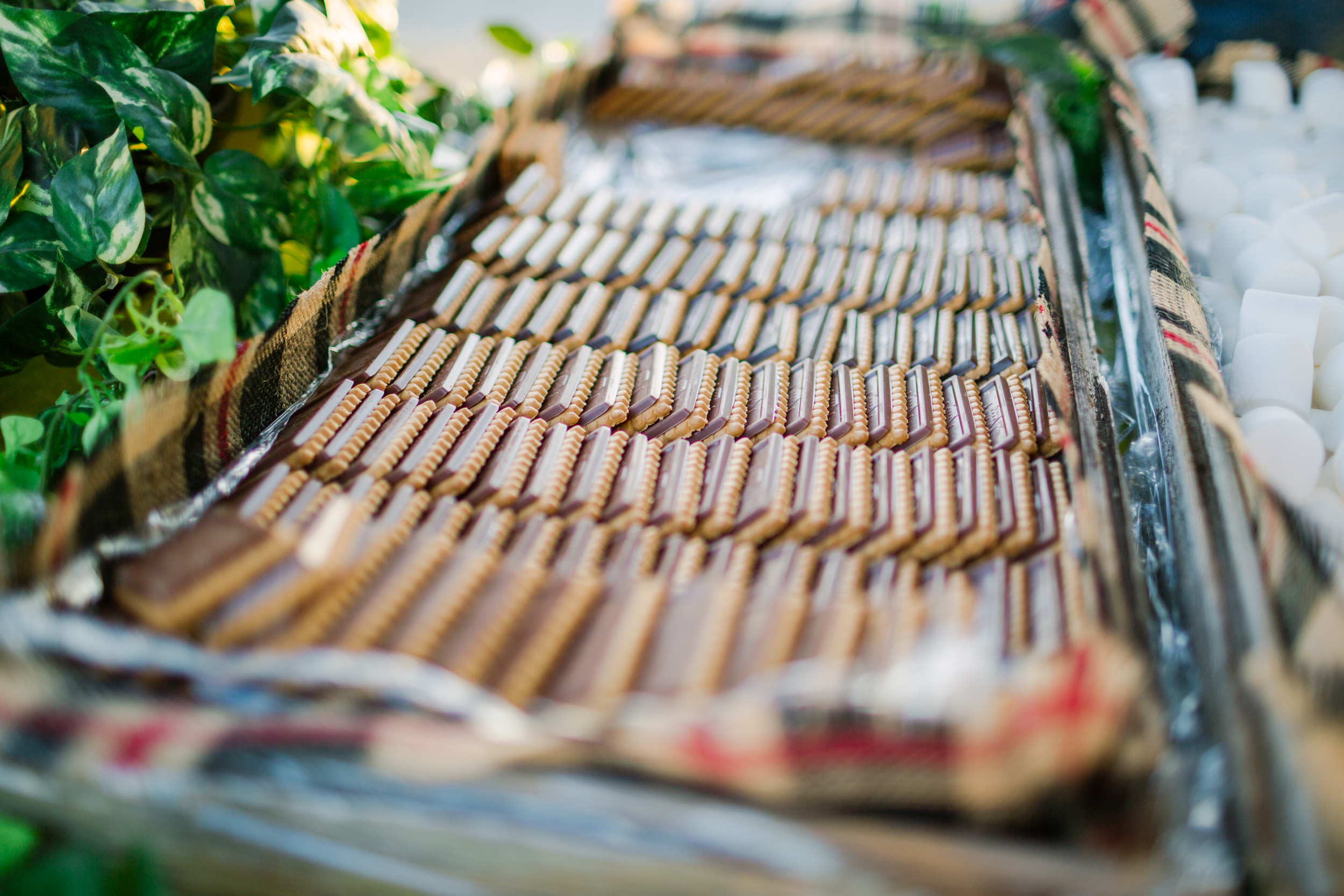 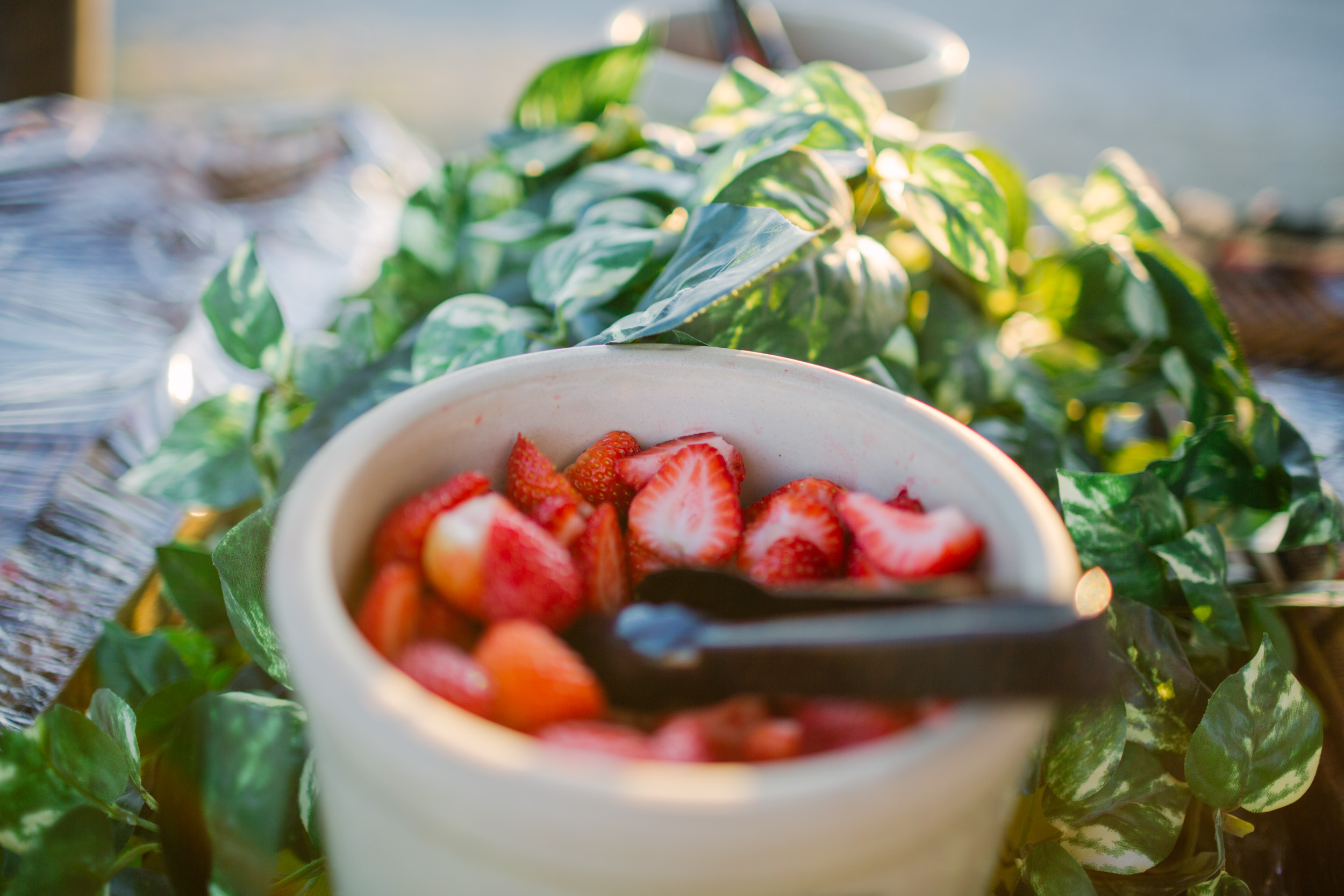 The friendships formed as the sun set over the pond creating a calm and inviting ambiance, which allowed the stars to emerge in the darkening evening skies and twinkle overhead. 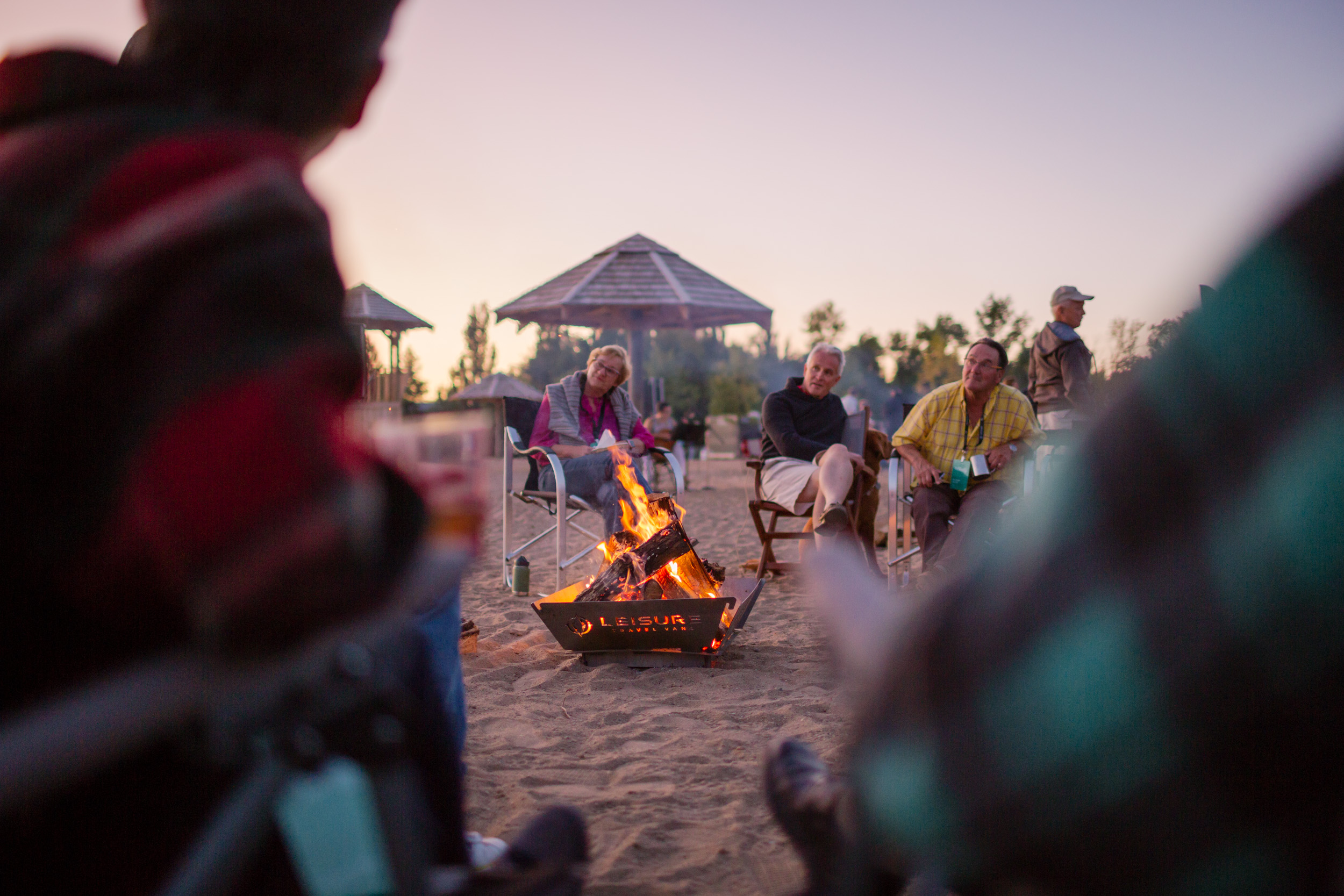 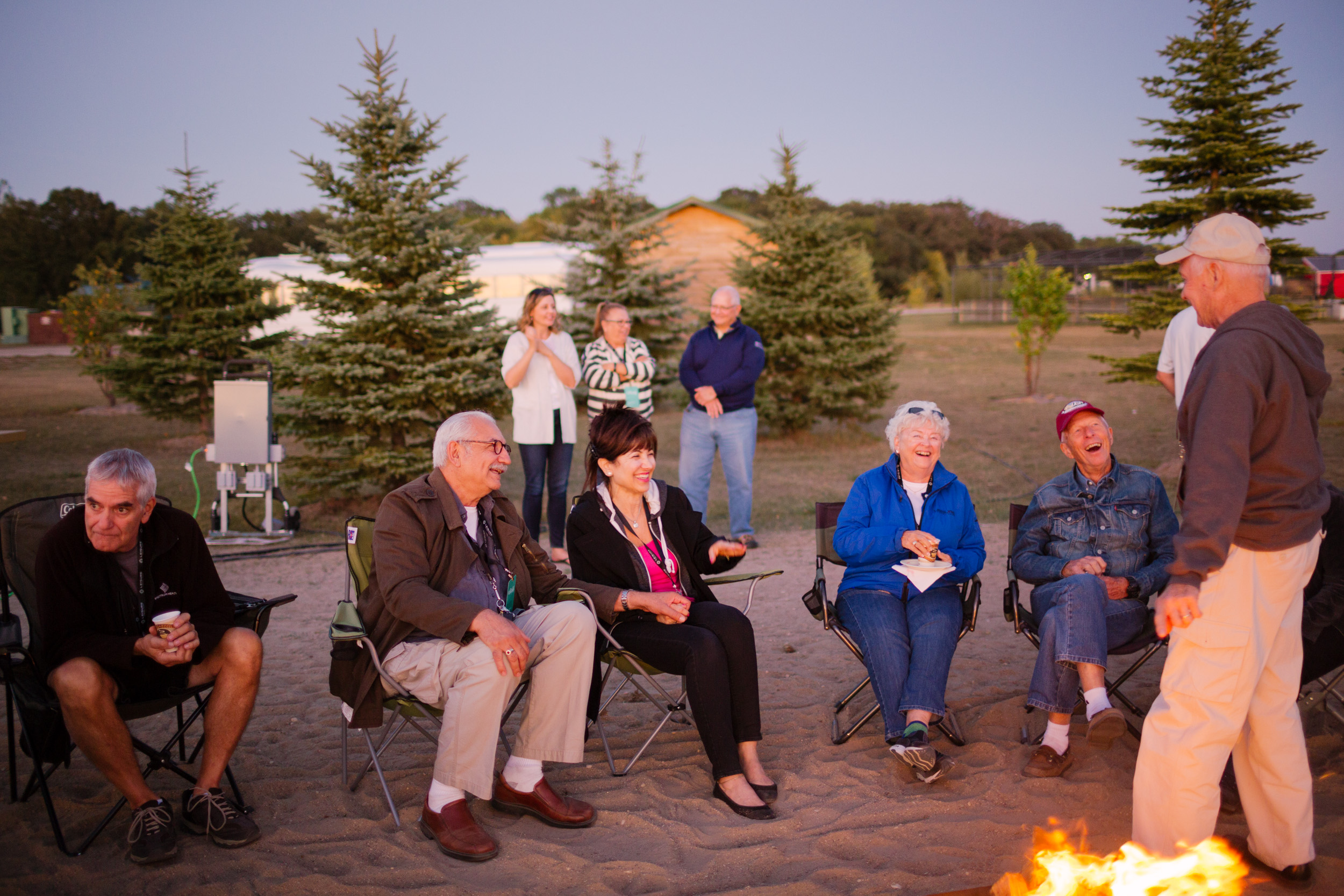 For three days the weather cooperated with shining sun and perfectly blue skies, and although the nights were cold, it sure made for great sleeping.

… and for us consisted of FUN. But not without first chatting with LTV Staff who were busy outside baking us our breakfast of homemade waffles. 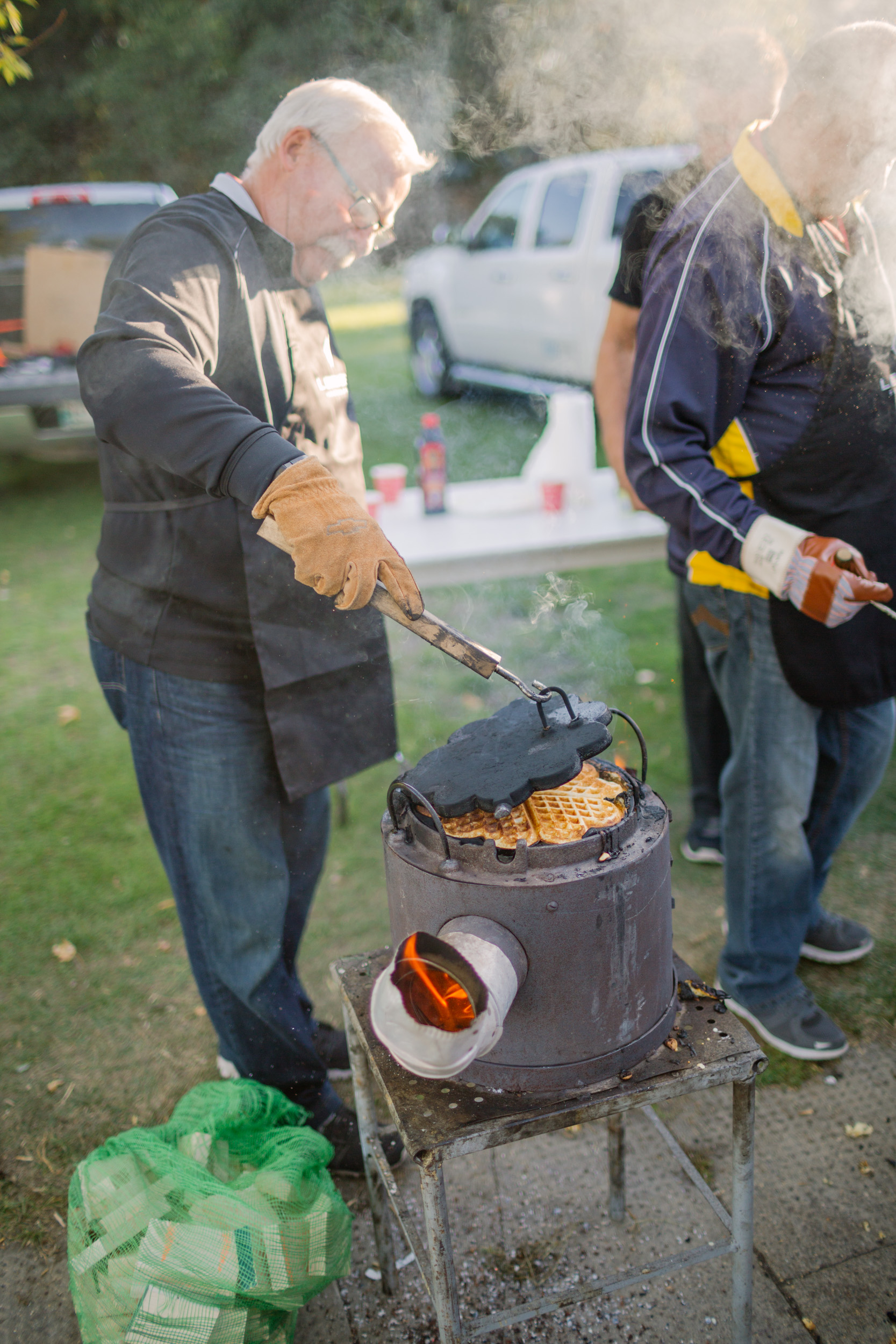 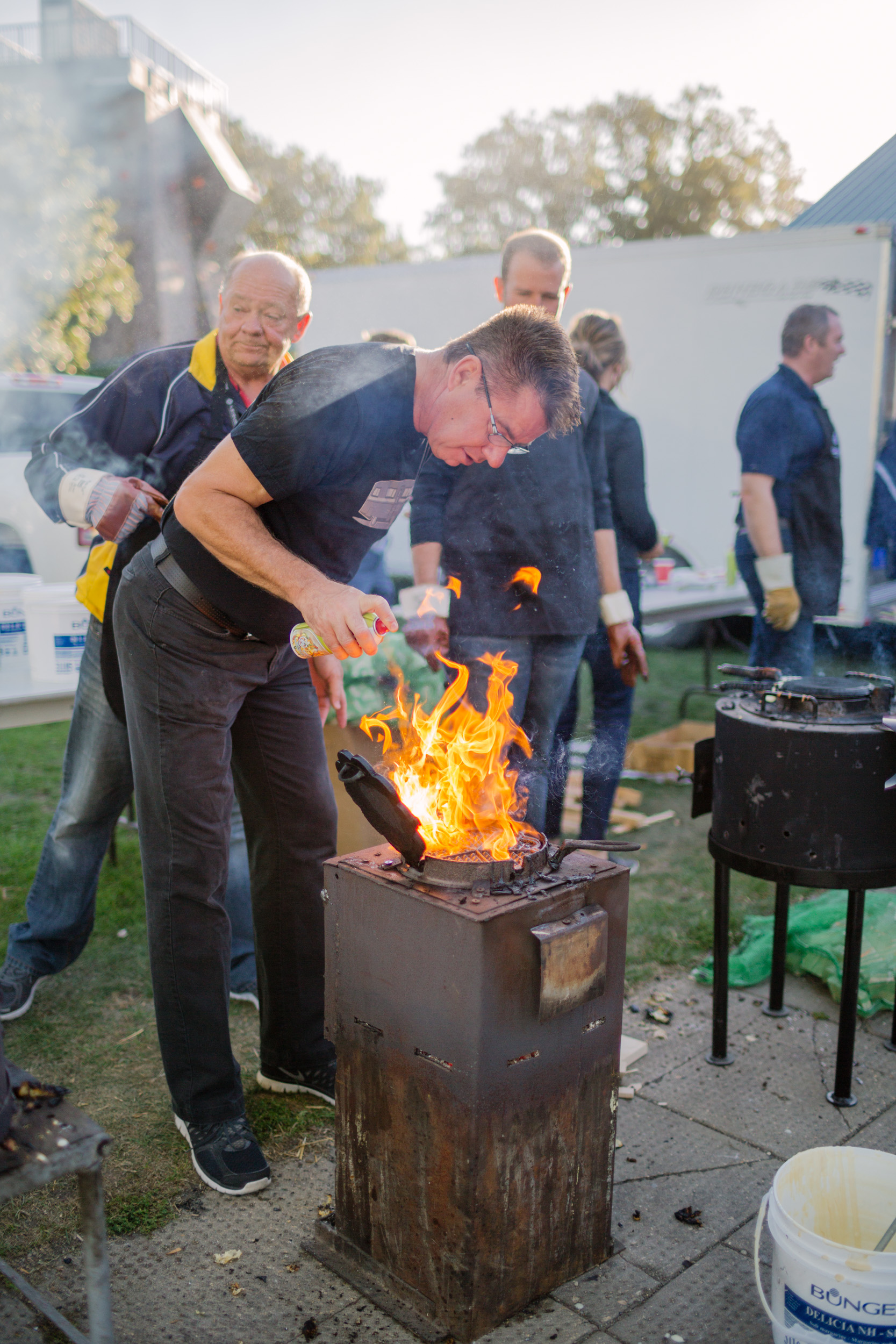 Some people signed up for a golf game. More Factory Tours on the go, and since we’d done one last year we were free to clamber in the limousine style bus complete with mirrors on the ceiling as we enjoyed a comprehensive and in depth tour of Winkler. George, the Driver, and Walter, an ex-Triple E employee was informative and took his time touring us about with many stories to share of an incredibly vibrant Community. 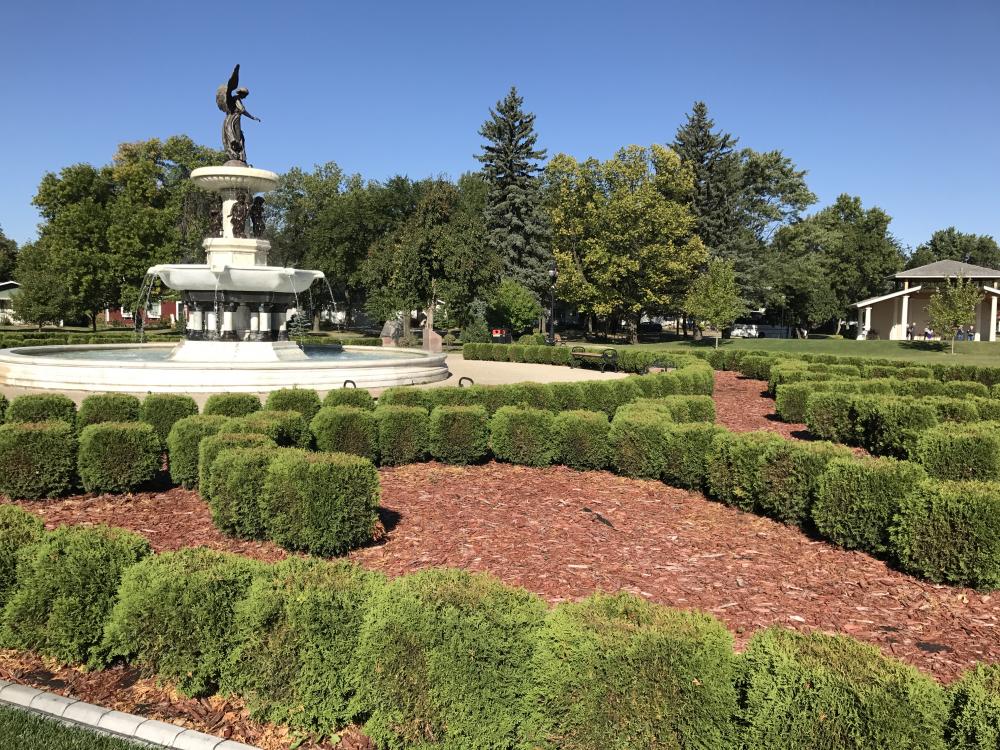 That afternoon we toured Thresherman’s Museum complete with people in period costume and tractors too old to count running around the fields of a maze in maize.

The cooking demonstration by Anna Magazine resulted in many delicious tastings and it was a treat to meet her, her infectious zest for her work, and her gifts of jam a wonderful parting present.

That evening, being “Canadian and all, eh?” we attended the Winkler Flyers hockey game and afterward were given a guided backstage tour of the facilities and a chance to meet some of the young lads vying for their spot in this very competitive group. 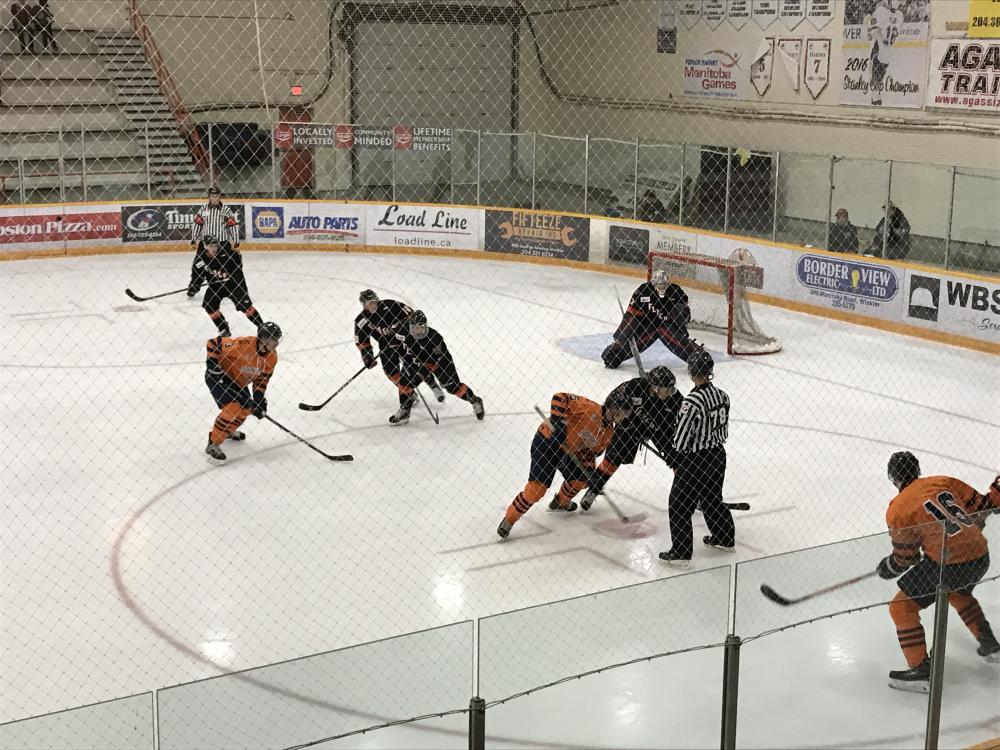 What we missed by doing that was an evening of music at the Chapel, which we later heard was quite lovely. 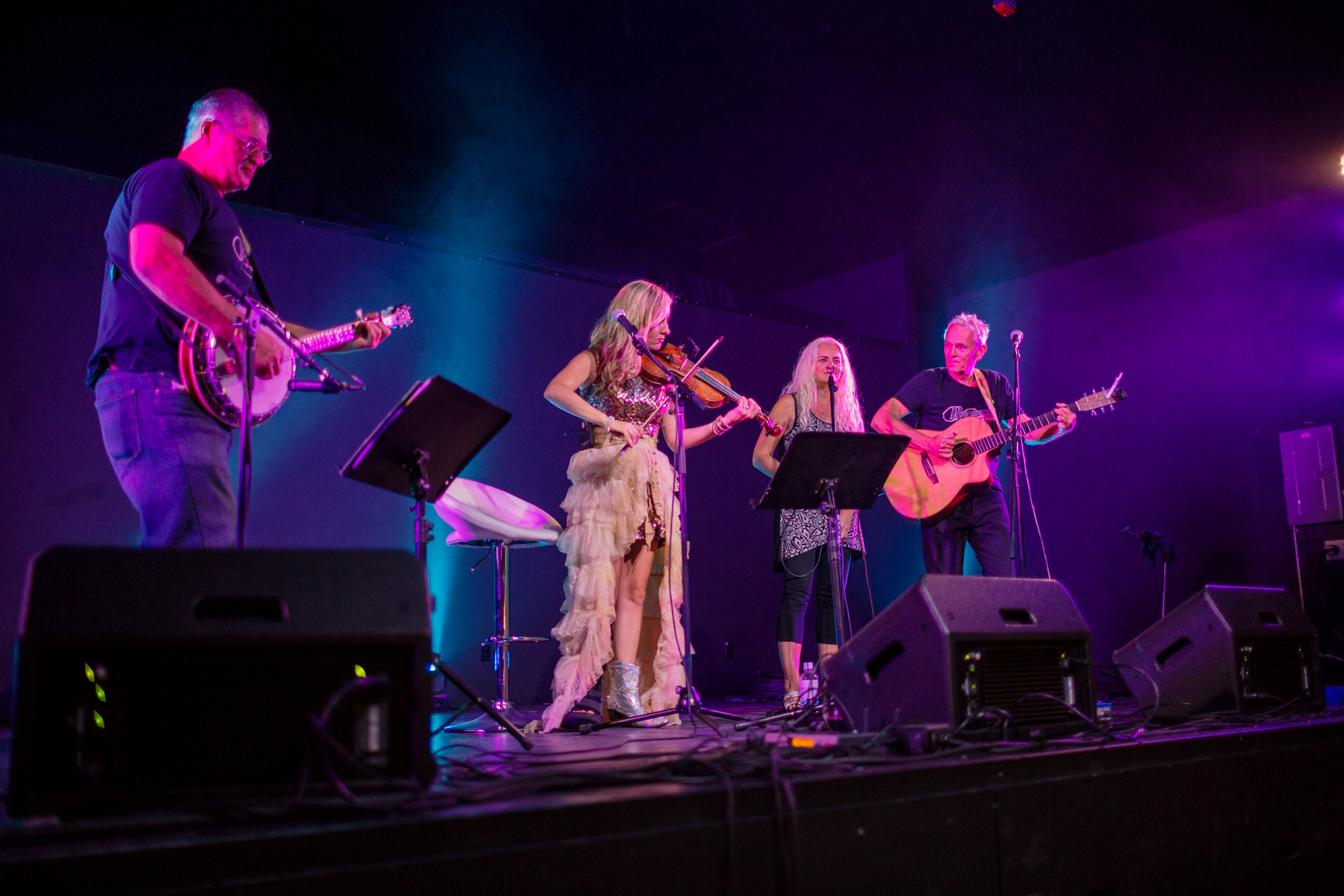 For three days we basked in the glow and love that is the very heart and core of this company. It was a pleasure for Dave and I, as Leisure Explorers, to meet the Marketing Guys, which had previously been just names on emails. Dean, who appears in all the LTV videos, brought in many different LTV makes and models to tour about in, and we enjoyed lots of laughs in his company. And of course, to put a face to the name that is Brad, who was the recipient of a few email queries from us.

For three days we were totally comfortable and kept well informed of updates & news. LTV/TRIPLE E planned, and in our opinion, succeeded in a successful Rally, making us feel like they’ve known us forever, like we totally belonged, that we were part of their… family.

Aha, Family! There you have it. We listened to many who insisted that this company needs to grow and expand to reduce the nine month waiting period, to produce more, make more.. etc. We humbly disagree. We too suffered a nine month waiting period, but we seriously believe they would grow too fast, produce too many RV’s too quickly, and lose the very thing that makes them so successful! This family atmosphere would be nixed in a too large too frenzied type of setting. We have, a few times over, experienced their bend over backward Customer Service, and we have to say, in every single instance, it was superior, top notch and professional. They’re all Crazy Busy, but they pay attention to each and every little detail and to every member: That’s family. That’s Leisure Travel Vans and Triple E RV.

There was nothing scheduled for the last morning except a good long breakfast before everyone planned for departure. There were many handshakes and hugs, and we were, in true Banyan fashion, the last to leave the great dining hall.

We are thrilled to be part of the Leisure Travel Van family. And our new mantra: Make Every Day Special!

Join us as we drive, OnOn! 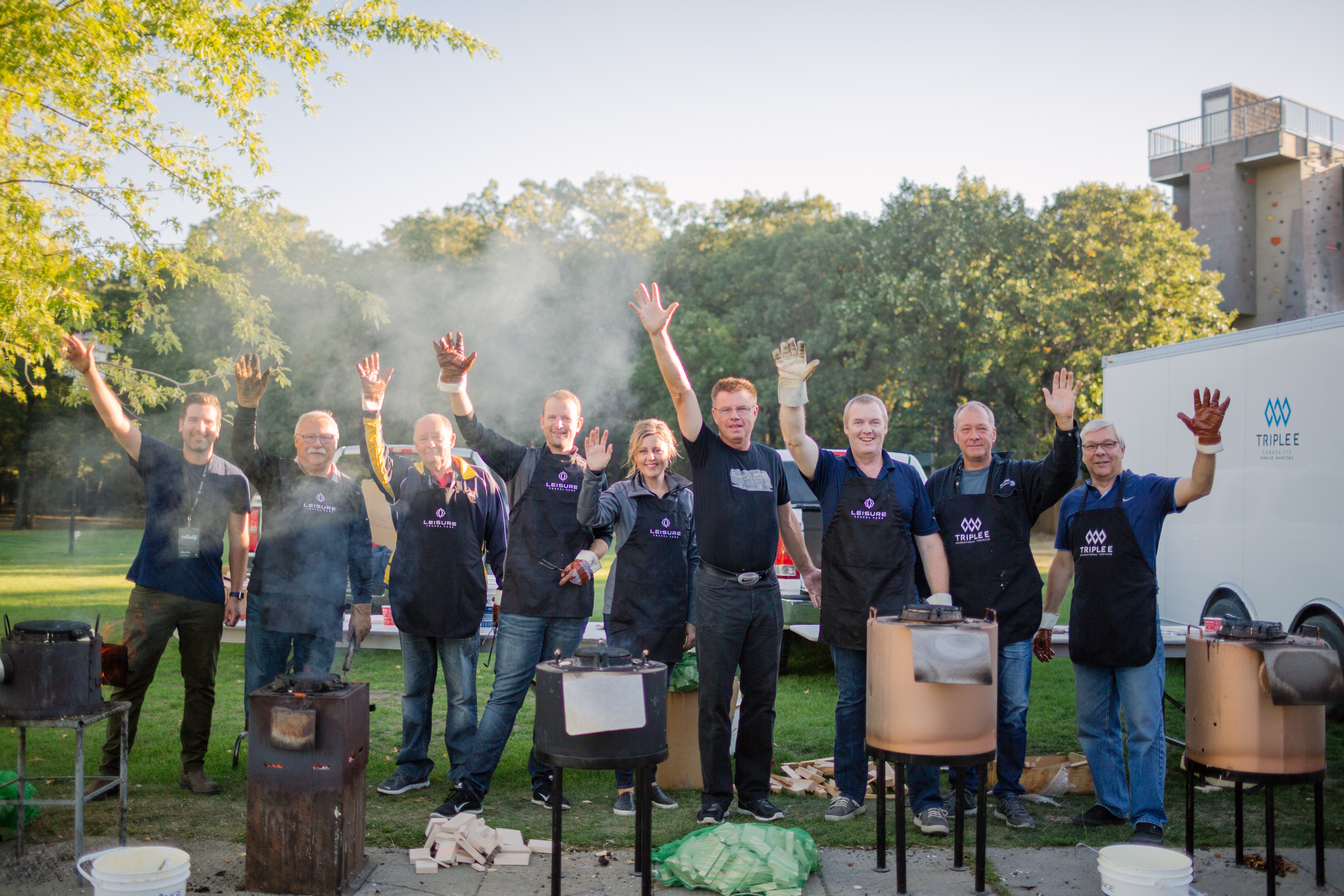