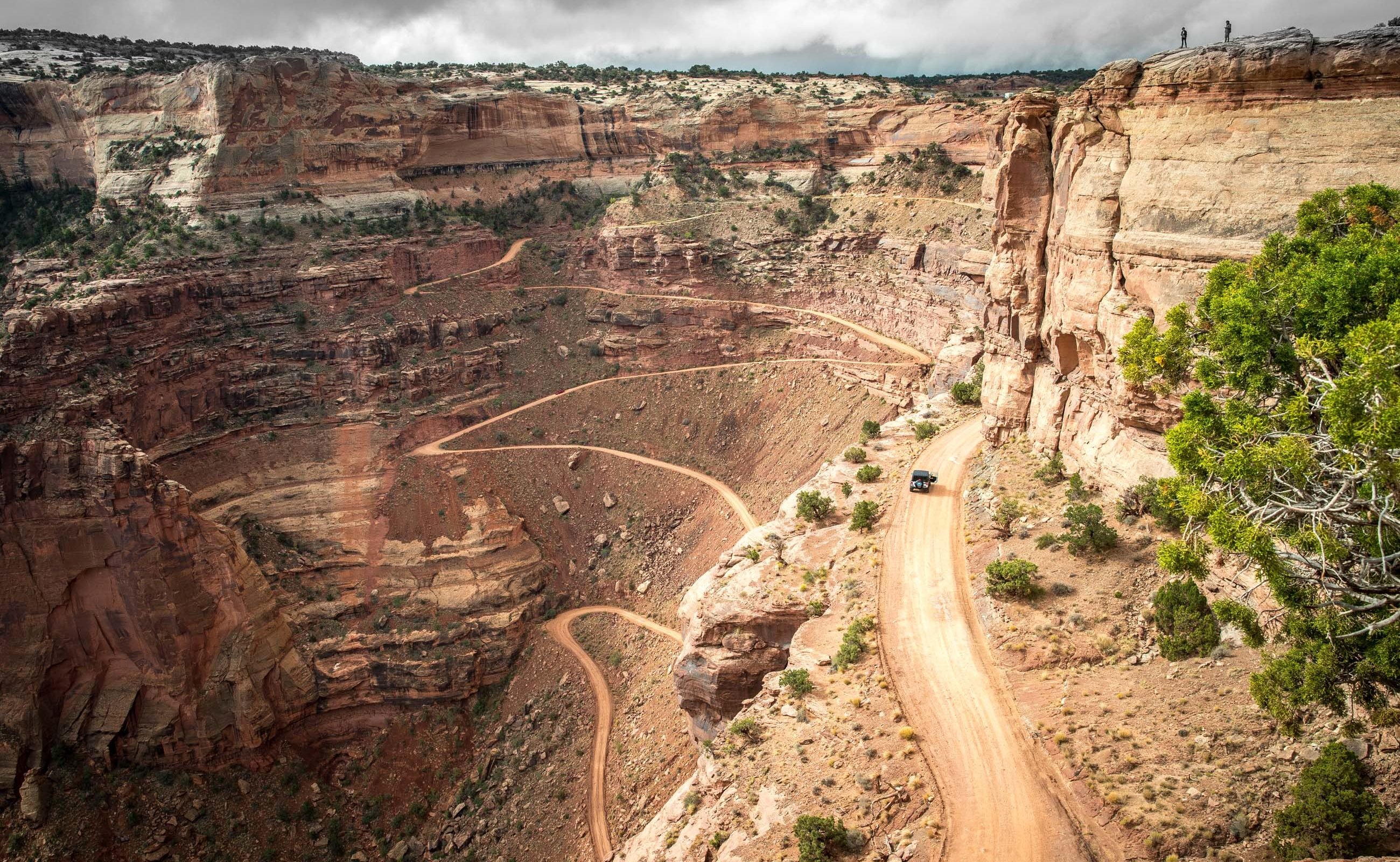 Driving on Shafer Canyon Road – aka the “Shafer Trail” – has to be one of the coolest things we have done in years. Strap on, buckle up, and join me for an epic four-wheel drive through a section of Utah’s Canyonlands National Park known as the “Shafer Trail.”

This adventure started exactly one year earlier while seated with our feet dangling over a cliff at Dead Horse Point State Park. My wife Joanne, our traveling companions (Jean-François and Joanne), and I were mesmerized by the tiny 4×4 vehicles meandering on the trail way below our feet. We were also intrigued by the fact that we were staring at the very spot where (spoiler alert) Thelma and Louise drive off the cliff into the Colorado River in the 1991 Ridley Scott road film. Wow! 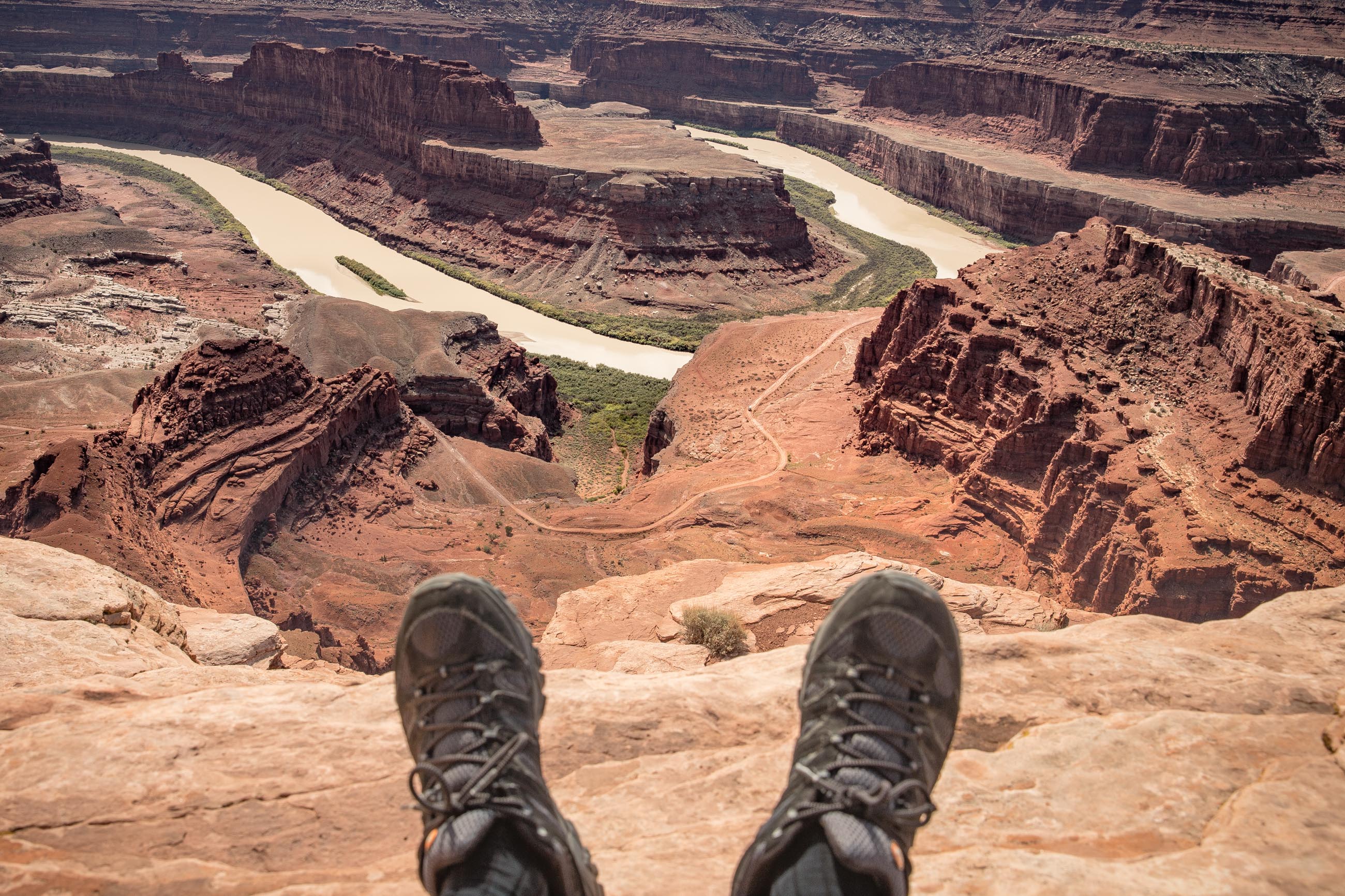 Feet dangling on the edge, we watched the minuscule vehicles on the trail, promising ourselves we would one day have our chance. 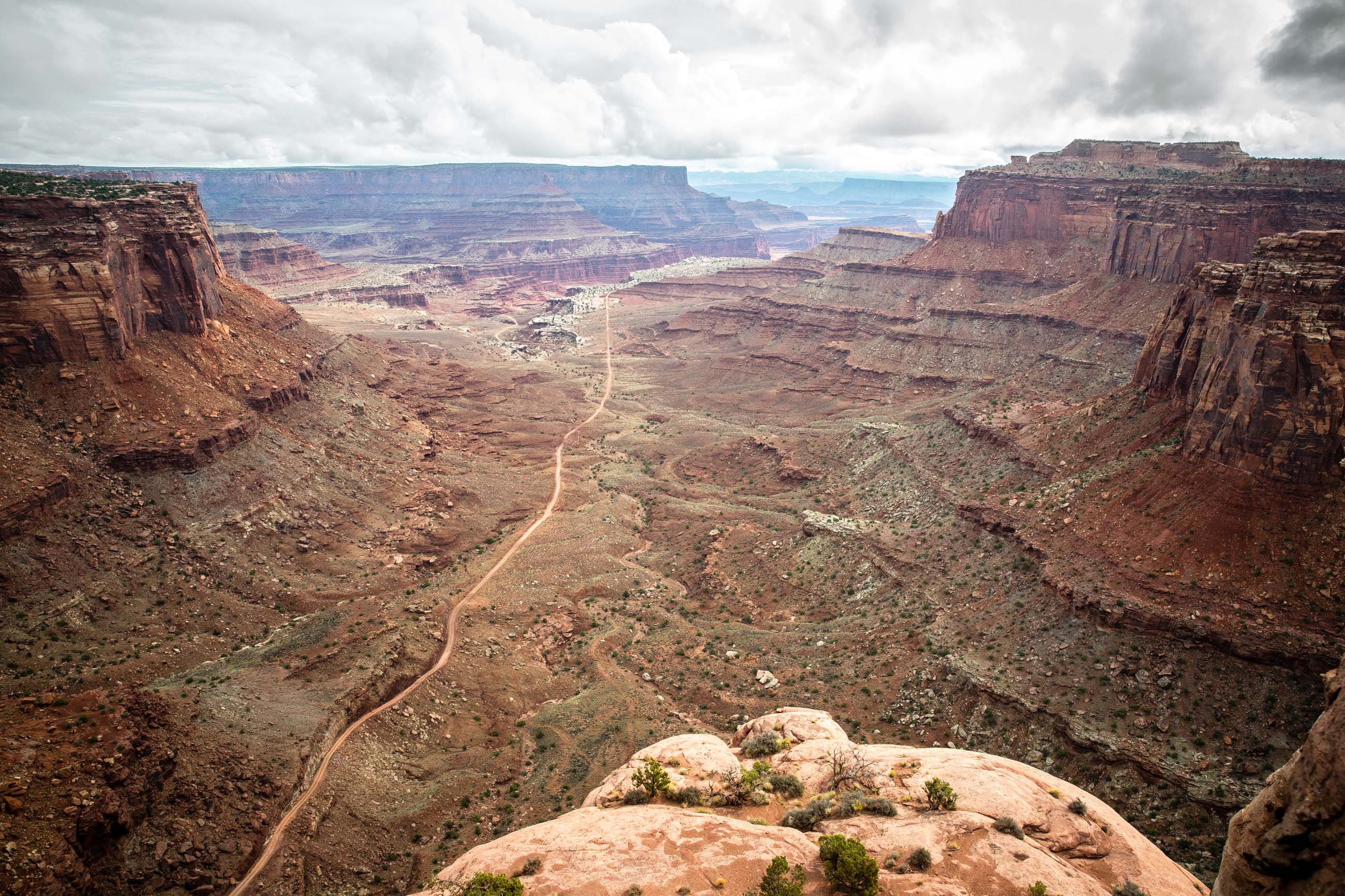 This is the first glance of the trail we had seen a year earlier from Canyonlands N.P.

“We MUST come back here and do that trail,” we promised ourselves. And the four of us did just that, one year later to the day. Plus we were joined by a couple of friends who happened to be in the area and it didn’t take much convincing for them to join us.

Getting ready and we’re on our way!

We chose Barlow Adventures in Moab for our Jeep rental. They offered recent and well-equipped vehicles for a 24hr period and they were very helpful in providing us with a detailed itinerary for the day. With JF at the helm, we equipped our jeep with a hood mounted Sony FDR-X3000 4K video camera and off we went to our starting point at the intersection of routes 191 and 279 (not far from the Arches N.P. entrance). Route 279 follows the Colorado River with breathtaking early morning light grazing the massive cliffs rising on each side. This road eventually becomes known as Potash Road and that is where the real fun begins. 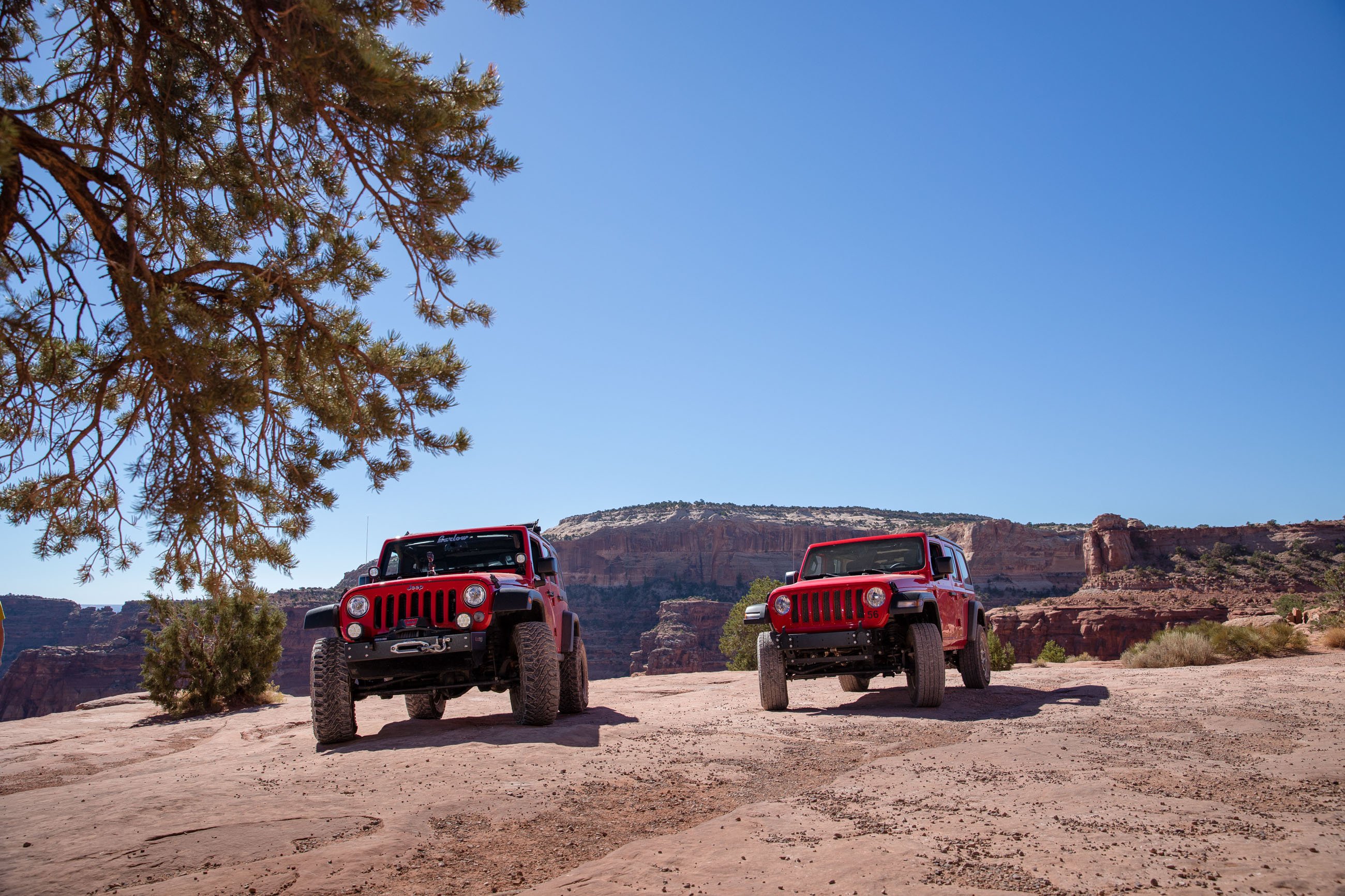 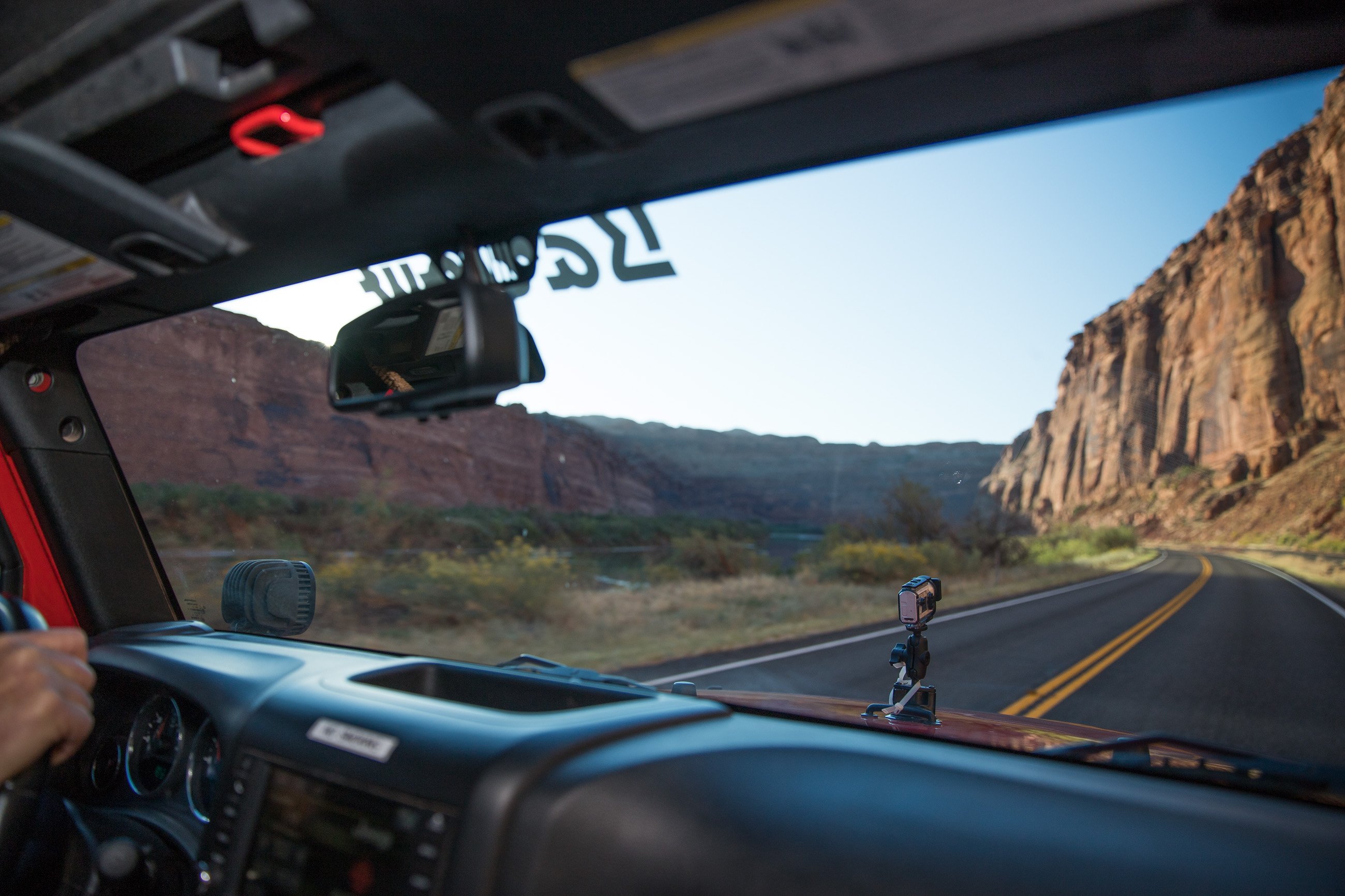 With our video camera well secured on the hood, we started our drive on Potash Road near Moab.

The first milestone is the Potash Ponds, a network of 23 large evaporation ponds that are the visible result of a long and complex mining operation to produce potassium-based fertilizer. These colorful ponds are quite striking when viewed from space as in this NASA image. We had witnessed these from the Dead Horse Point State Park the year before. Quite impressive from afar but not so much up close. 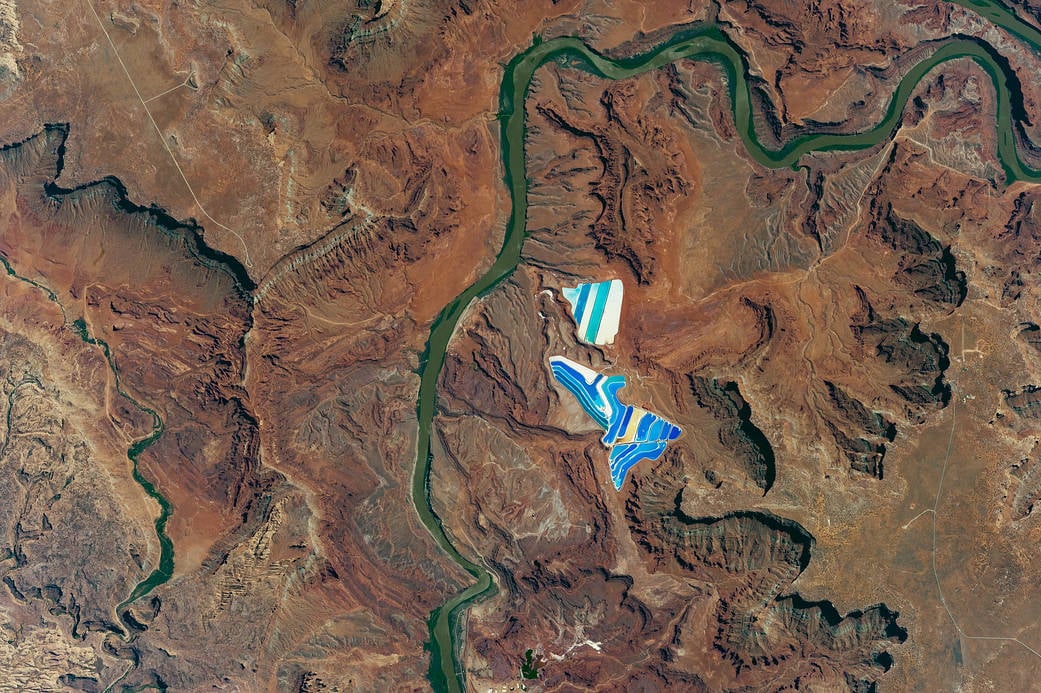 A few minutes later the ponds are but a glimmer in the rearview mirror, and the road becomes rougher and I’m holding on tight to my camera gear hoping the Sony on the hood wouldn’t fly off as we’re being tossed around. One really shouldn’t venture further without a high clearance vehicle although we did witness a few sedans on the trail and really couldn’t figure how they managed to get through. This is DEFINITELY not a safe drive for our beloved motorhomes. I can’t stress enough the overwhelming feeling you get while traveling on the bottom the result of millions of years of erosion. It is a force of nature that humbles us as human beings.

Thelma and Louise and us

Large boulders rise up on both sides of the trail like giant backstops as we shift the gears to independent four-wheel drive and we unlock the suspension–it is now acting like a cat walking on hot coals. After a while, we crested a hump in the road and glanced ahead towards a large clearing bordered on the left by the Colorado River hundreds of feet below and giant cliffs to our right. “I believe this is the spot where they filmed the last scene of the movie,” I informed the group. We all climbed out and not a word was spoken as we stared down at the greenish Colorado river stretching itself into the distance, meandering its way south. After a mandatory group picture, we regretfully climbed back into the Jeeps after what seemed such a short stop. We still had lots of ground to cover. 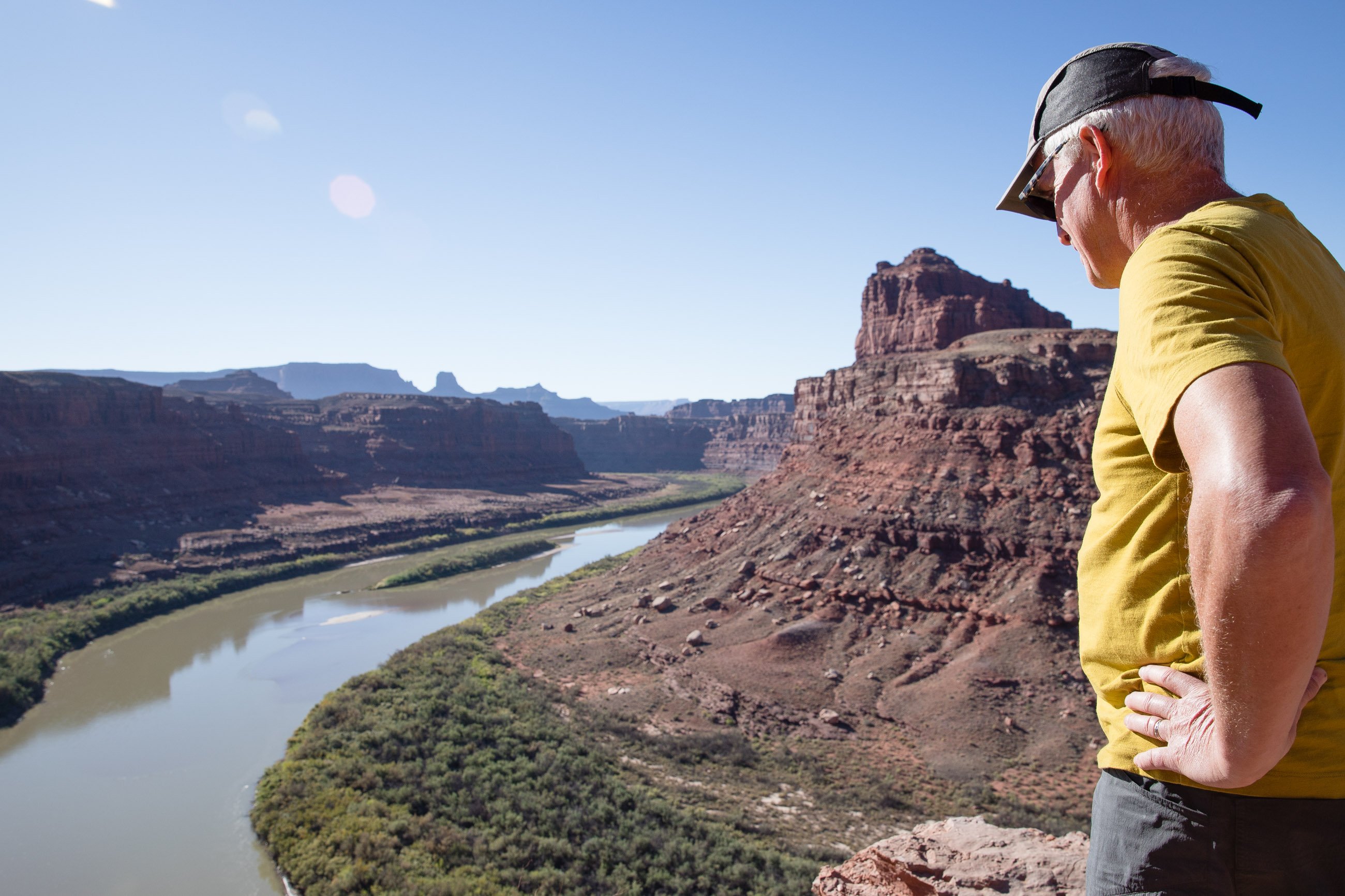 Jean-François gazing at the Colorado River. A very peaceful bend in the river kept us mesmerized for a while. 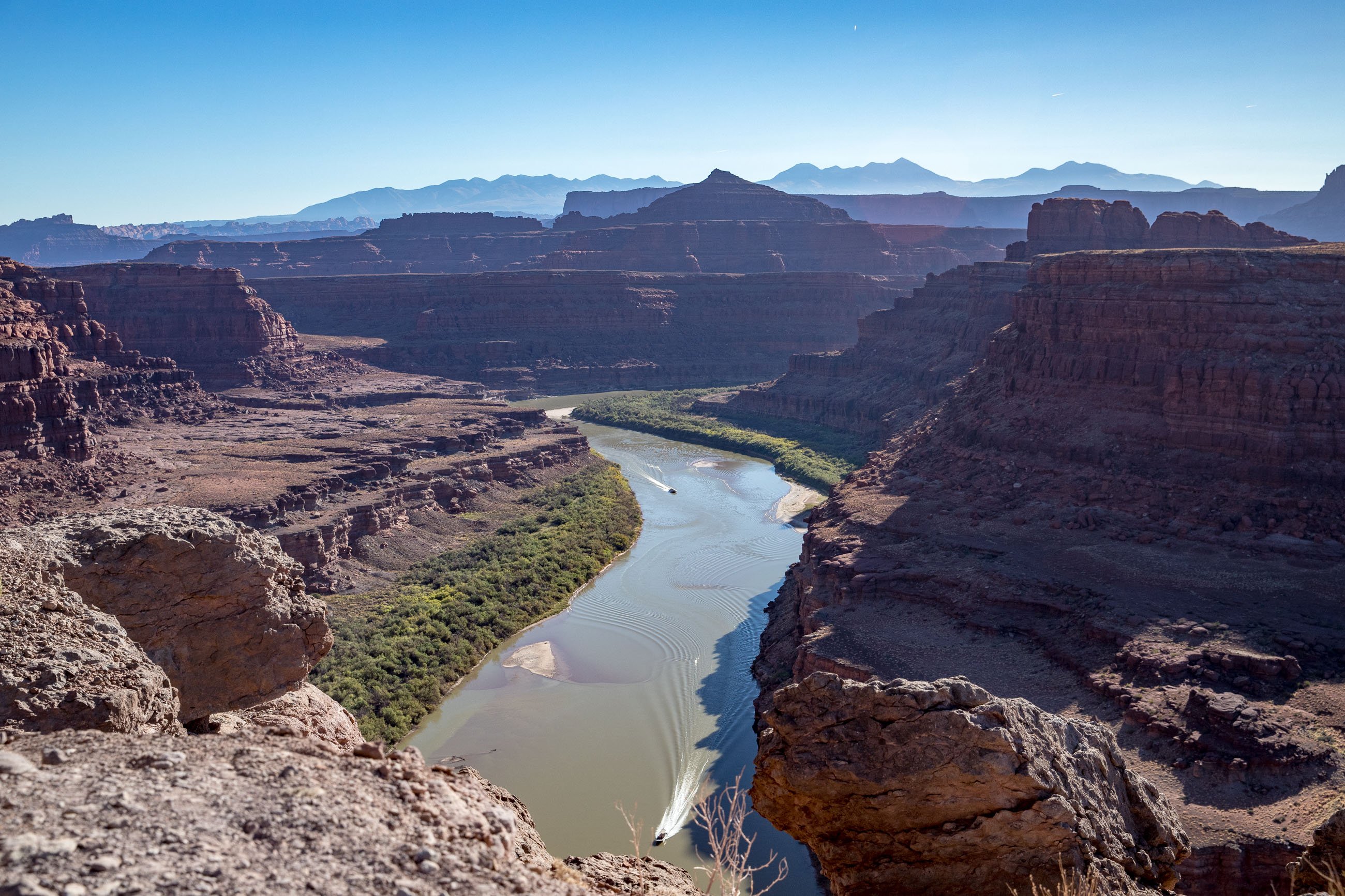 The Colorado stretching itself in the distance, meandering its way south. Perhaps next time we will be the ones in the boats!

Here are the “Fearless Six and their mounts” striking a pose. 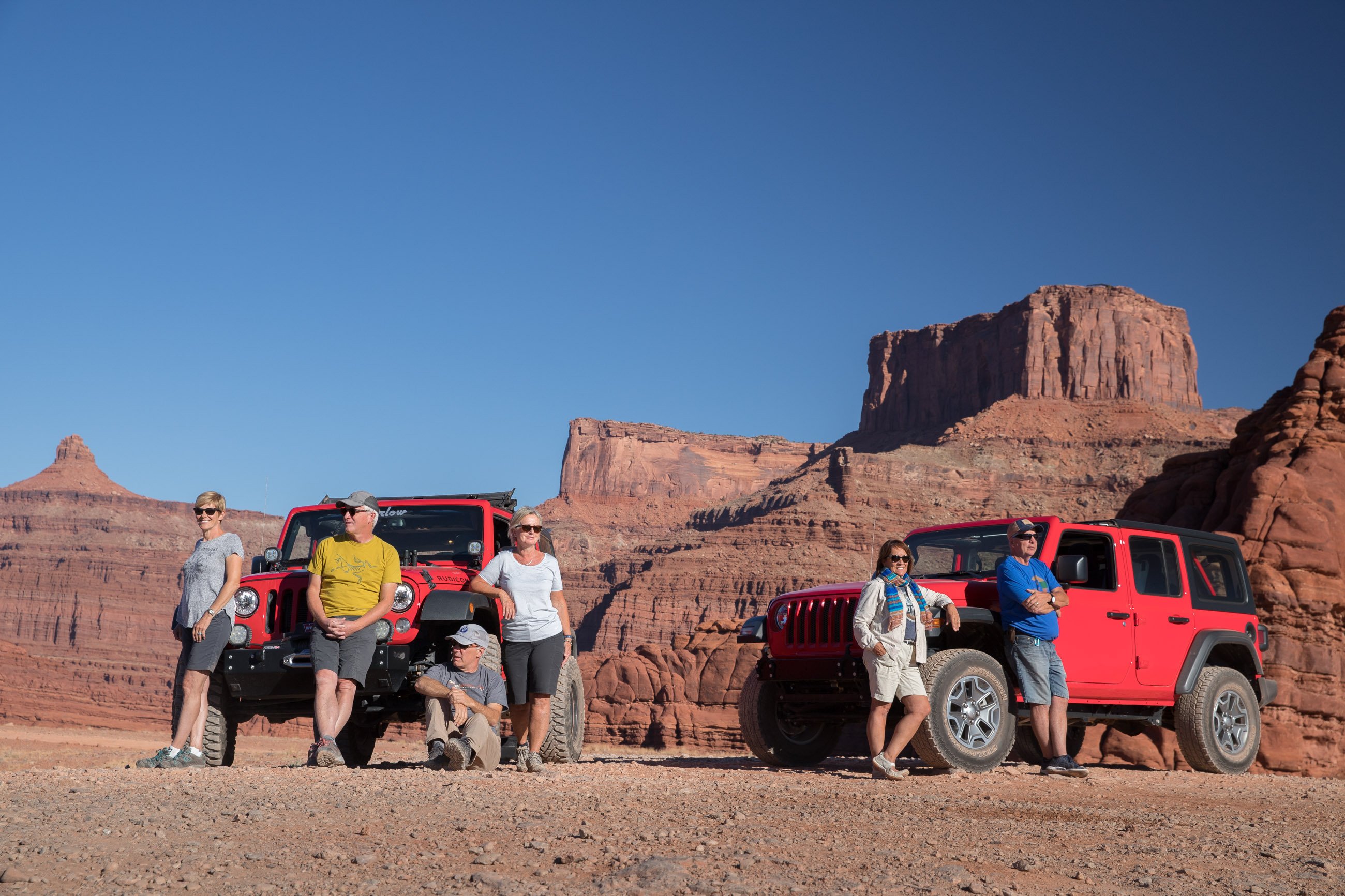 In our own minds, we are all picturing what is coming and we are smiling as the Jeep is rocking and rolling, up and down the trail. We come to a crossroad and we veer right towards the steep lacy road leading to the top at Canyonlands on the famous Shafer Trail. We all remembered seeing the exact spot where we marveled at the minuscule vehicles last year and here we are! Perhaps some park visitors atop the cliff are having the same thoughts as they stood in the same place and seen the same view as we did a year earlier. 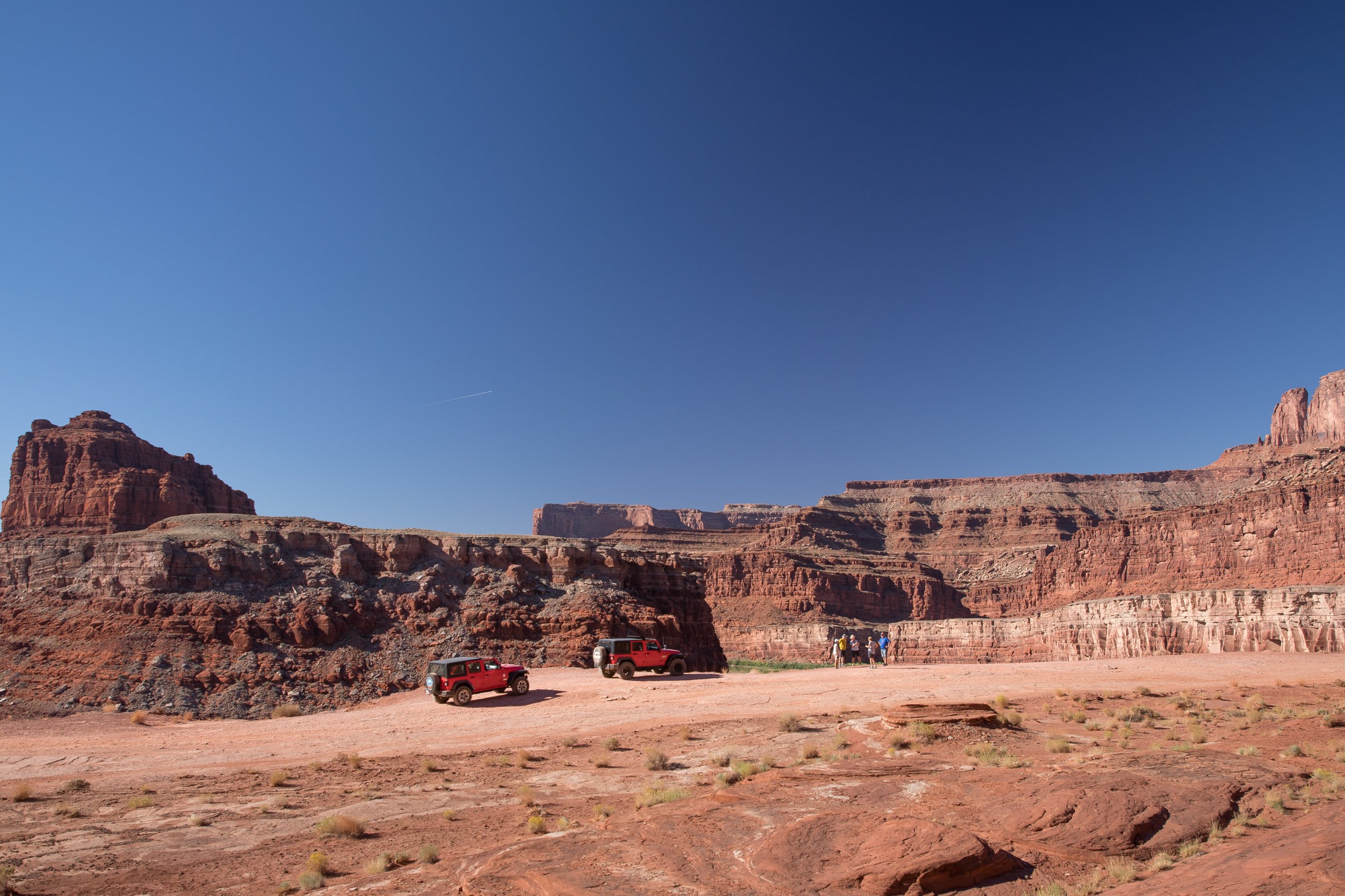 In the distance, we see a small building. To our surprise, it’s a restroom, in the middle of nowhere! We park the Jeeps and notice there are signs for tent campsites. What a spot. I stand there for a few minutes gazing at the thousands of acres of breathtaking landscape, thinking how lucky we were to be there. We all head back to the Jeeps for the last leg of this trail, which turned out to be a highlight of the day. 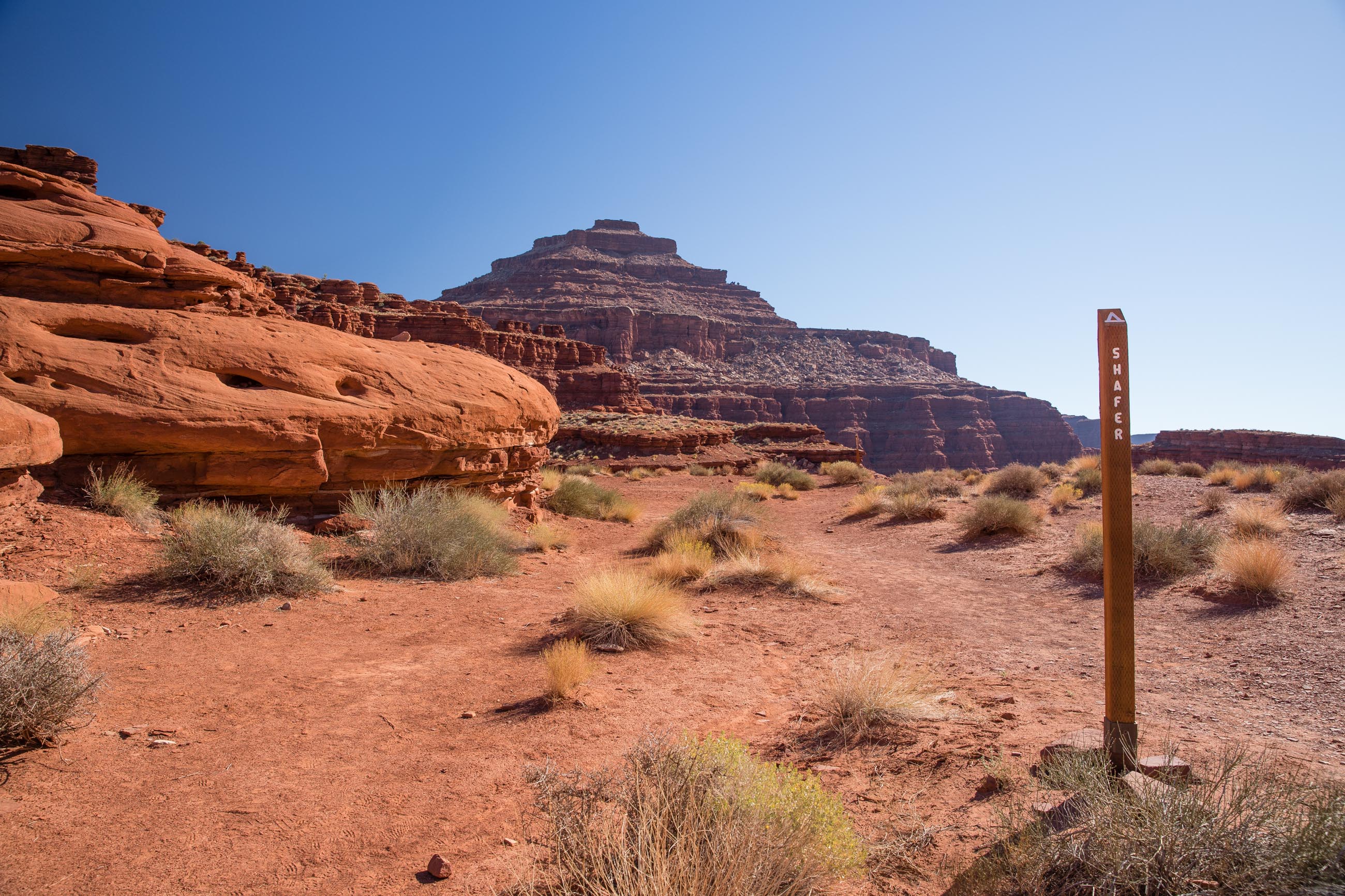 What a spot for campsites, with bathrooms nearby as a bonus.

Heading up the switchbacks

We arrived at the spot where the trail heads north, and I mean up! We are about to climb a cliff hundreds of feet straight up on a trail set like a folded ribbon, patiently switchbacking its way up, left and right, with just enough room for a vehicle. Thankfully there are numerous places where the trail swells just enough to allow passing vehicles safe passage. Perhaps they wouldn’t admit it now but some passengers did not venture a look to the left or right as we climbed on. Luckily our awesome driver Jean-François expertly kept the Jeep on the road and I was busily snapping away with my camera.

We are about to climb a cliff hundreds of feet straight up on a trail set like a folded ribbon, patiently switchbacking its way up, left and right, with just enough room for a vehicle. 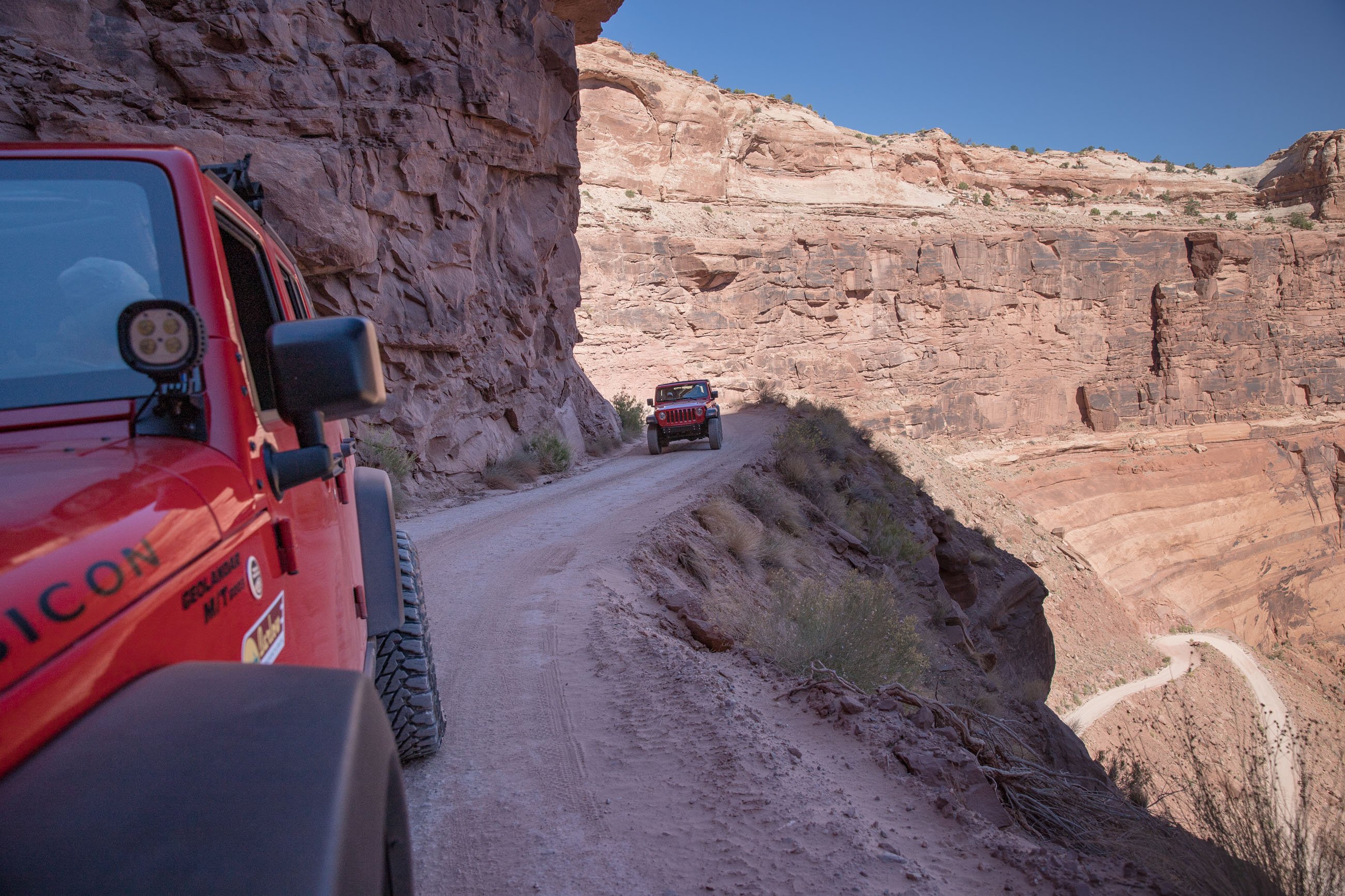 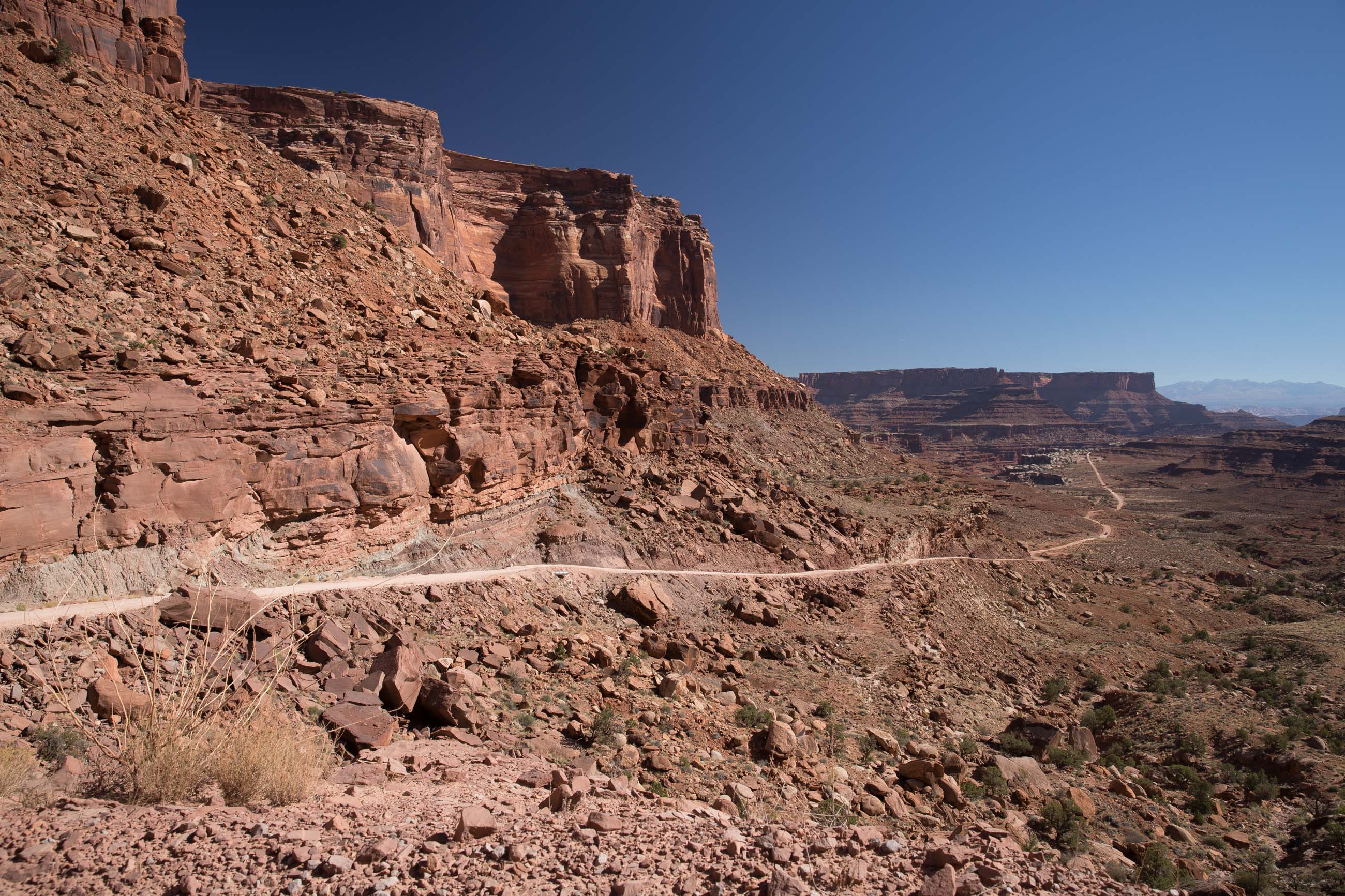 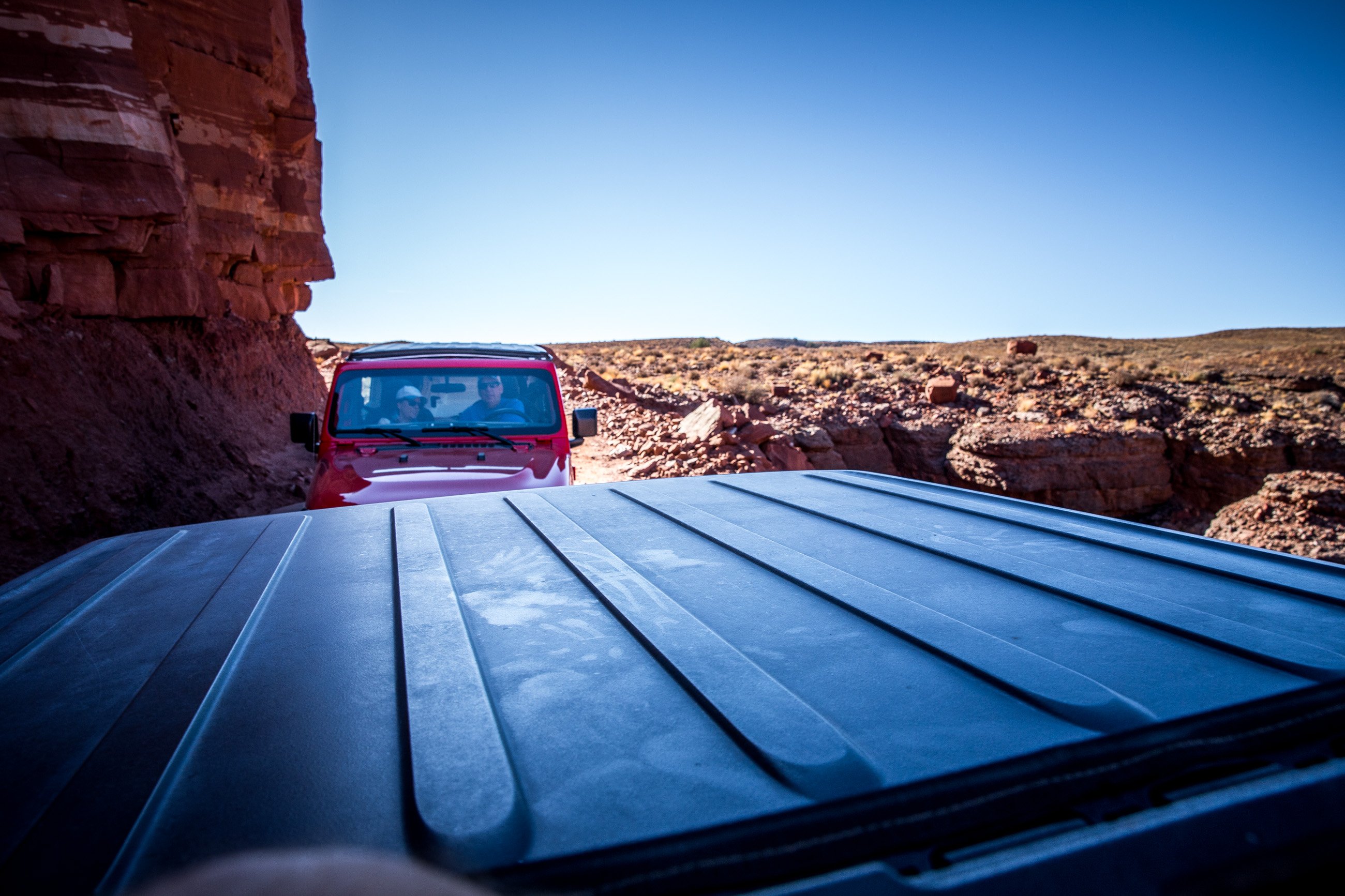 We safely make it to the top of the Shafer Trail and we exit at the gate for the Canyonlands National Park with a sense of accomplishment and of promises held. Our itinerary takes us down two more trails one of which we will forever remember as it came as a total surprise and probably equaled the thrill we had on the Shafer Trail. It is called Long Canyon Road and it departs on the road to Dead Horse Point State Park.

This trail is a great companion to the Shafer Trail as it leads you back to Potash road then Moab, if that was your starting point. We thought we were all out of “wows” and other superlatives after the previous trail, but once we got to Pucker Pass and the hanging rock tunnel – a narrow and steep passage – it was difficult to hide our excitement. It is an easy trail if the conditions are right. I’m not certain how the trail holds up to rain storms but we are told a suitable 4×4 SUV will handle this road easily. 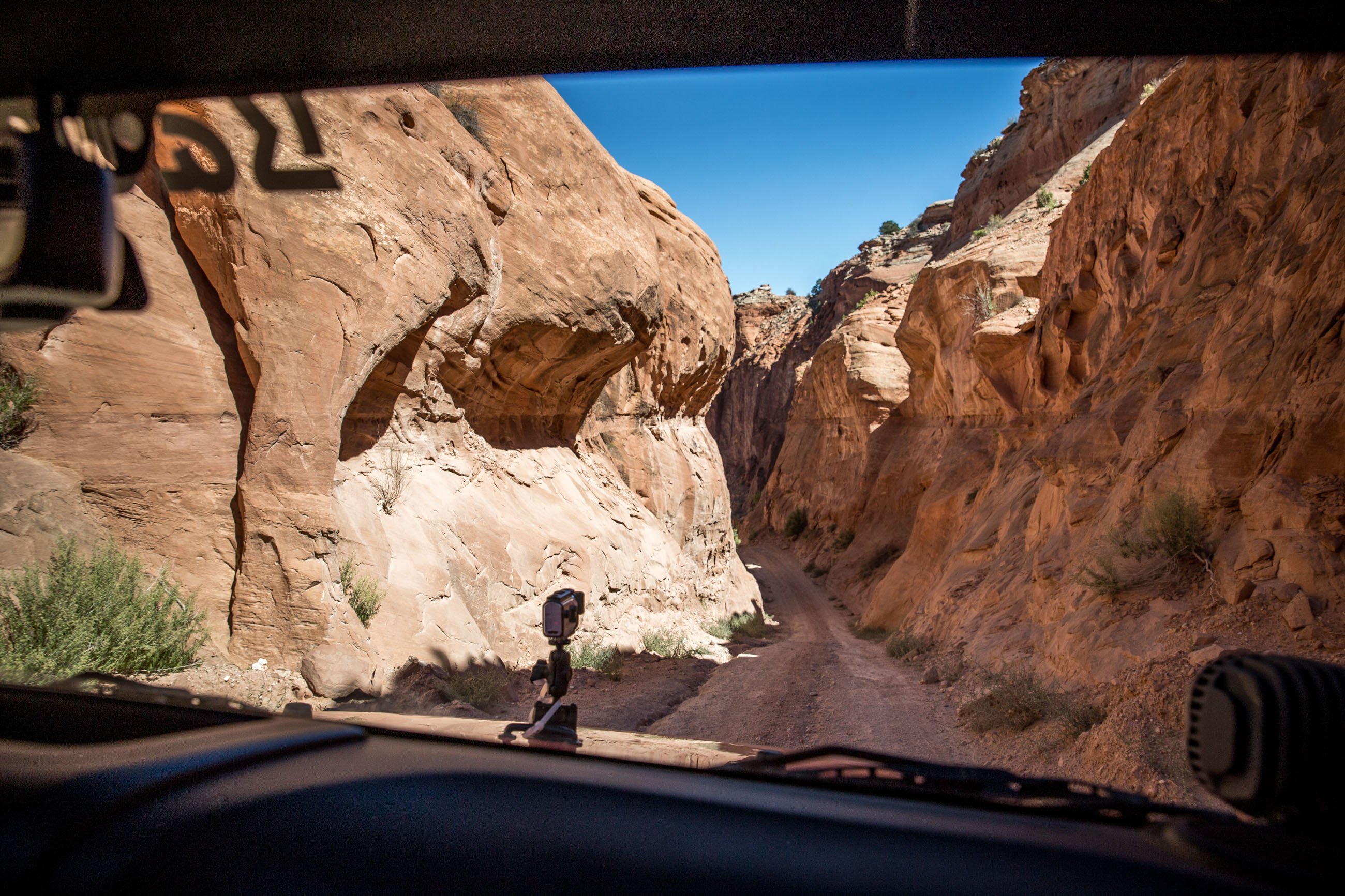 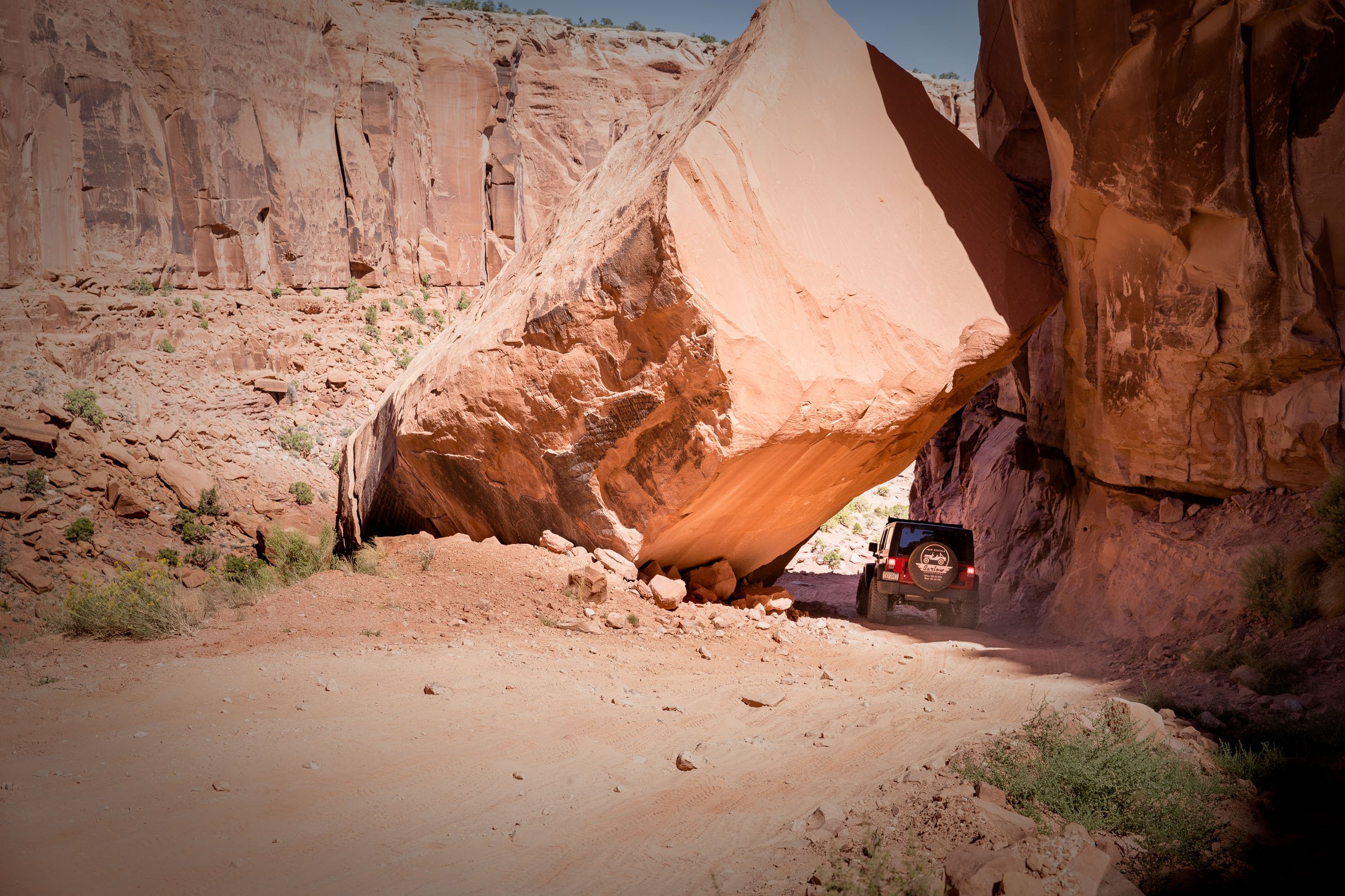 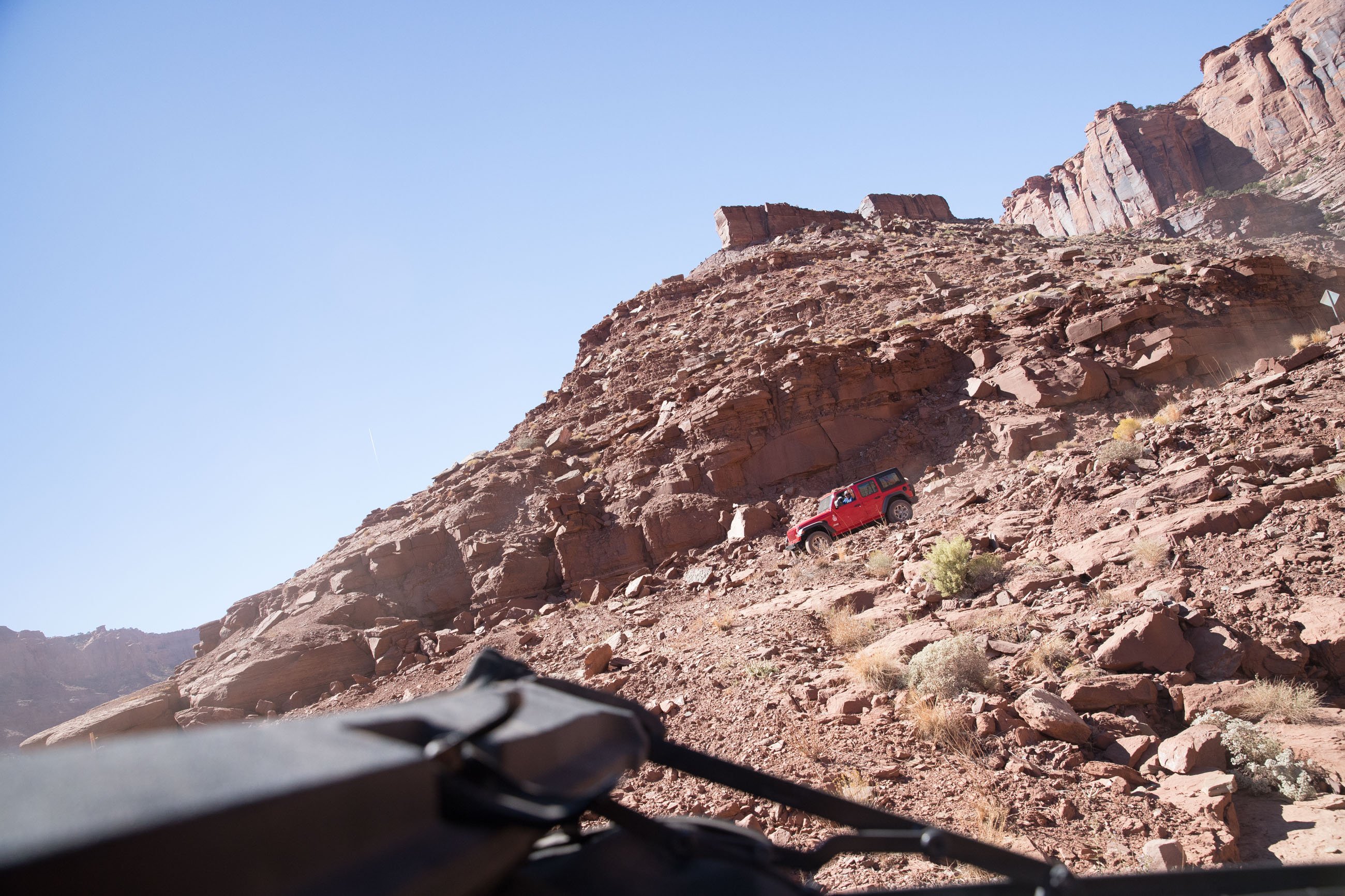 The afternoon sun was still high as we rolled back towards Moab, the Jeep’s top still open and we all turned our faces towards the heat of the sun feeling content and reflecting on what we had accomplished. Back at the campground, JF and Joanne dropped us at our motorhome and we all breathed deeply and looked at one another with large smiles that took a few days to wane.

I leave with a video of our passage on Shafer Trail. I accelerated four to eight times the speed of the video to keep the timing at a reasonable seven minutes. Hope you enjoy it.